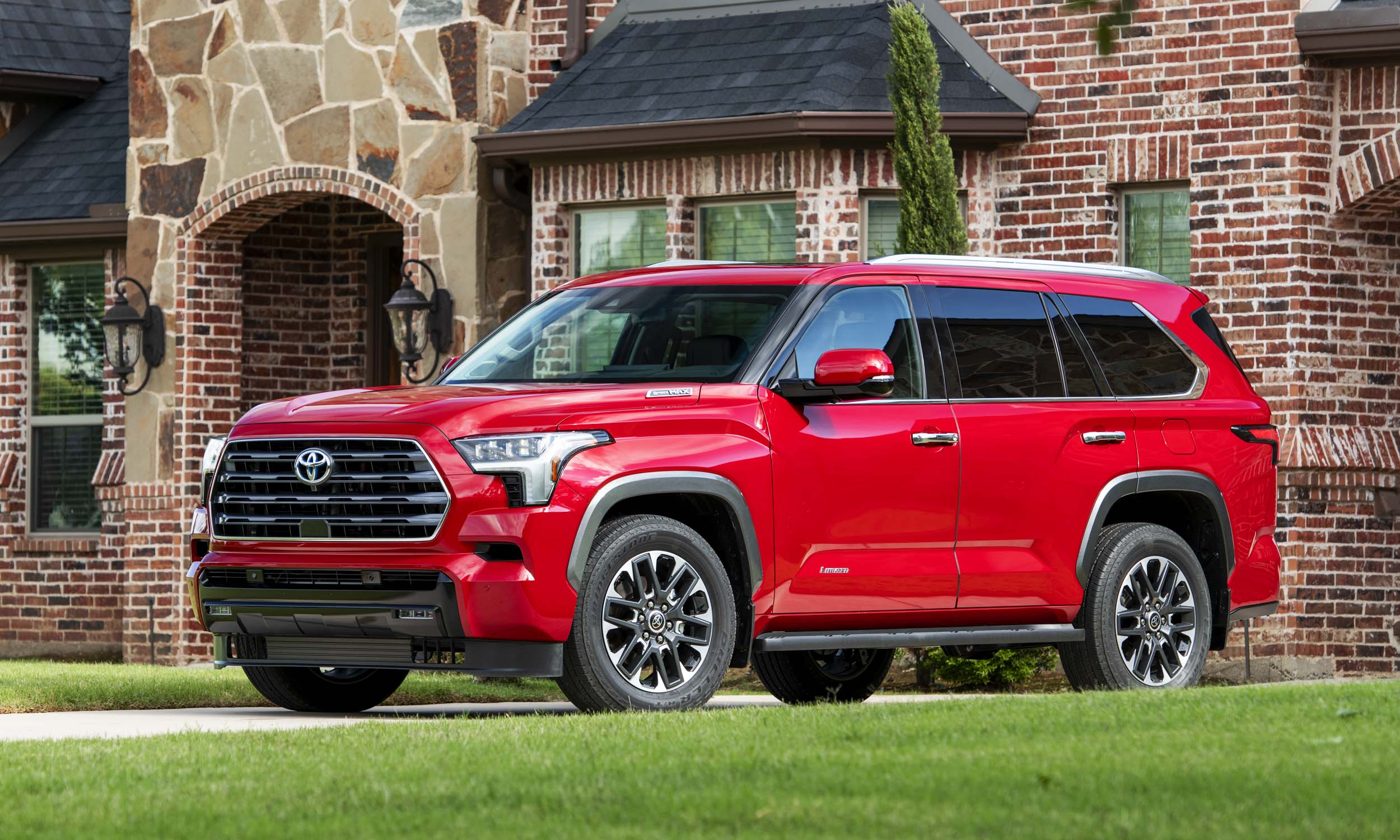 2023 Toyota Sequoia
The largest SUV in Toyota’s extensive lineup, the all-new Sequoia shares its body-on-frame architecture with the new Toyota Tundra pickup and the Lexus LX 600 SUV, while sharing its bold new exterior design with the Tundra. Redesigned for the first time since 2008, the new Sequoia features the same hood, headlights and front fenders as Tundra. Inside, Sequoia improves comfort across the lineup and adds the premium Sequoia Capstone as the top trim level. Sequoia also receives the new Toyota Audio Multimedia first launched in Tundra. The 2023 Toyota Sequoia is set to go on sale in summer 2022. 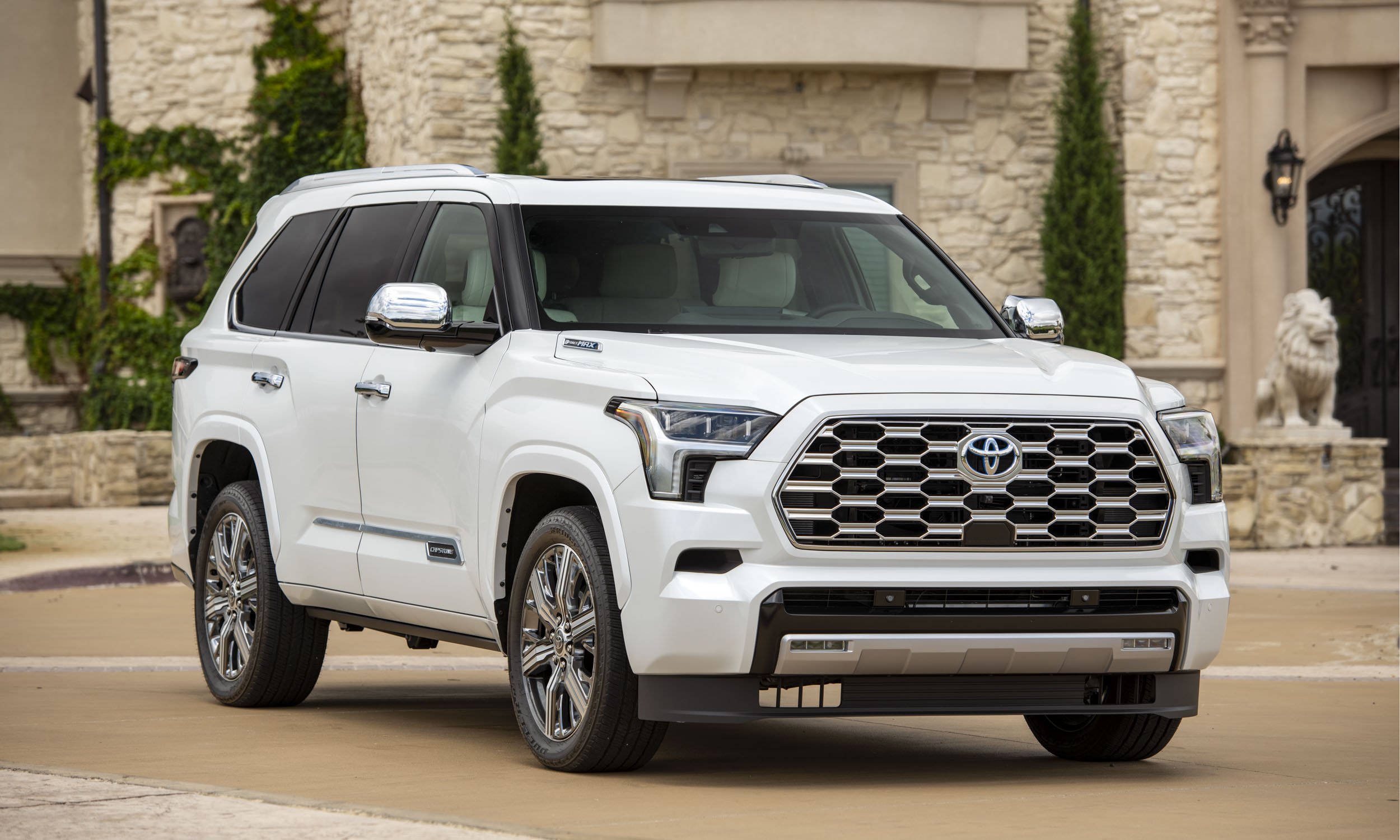 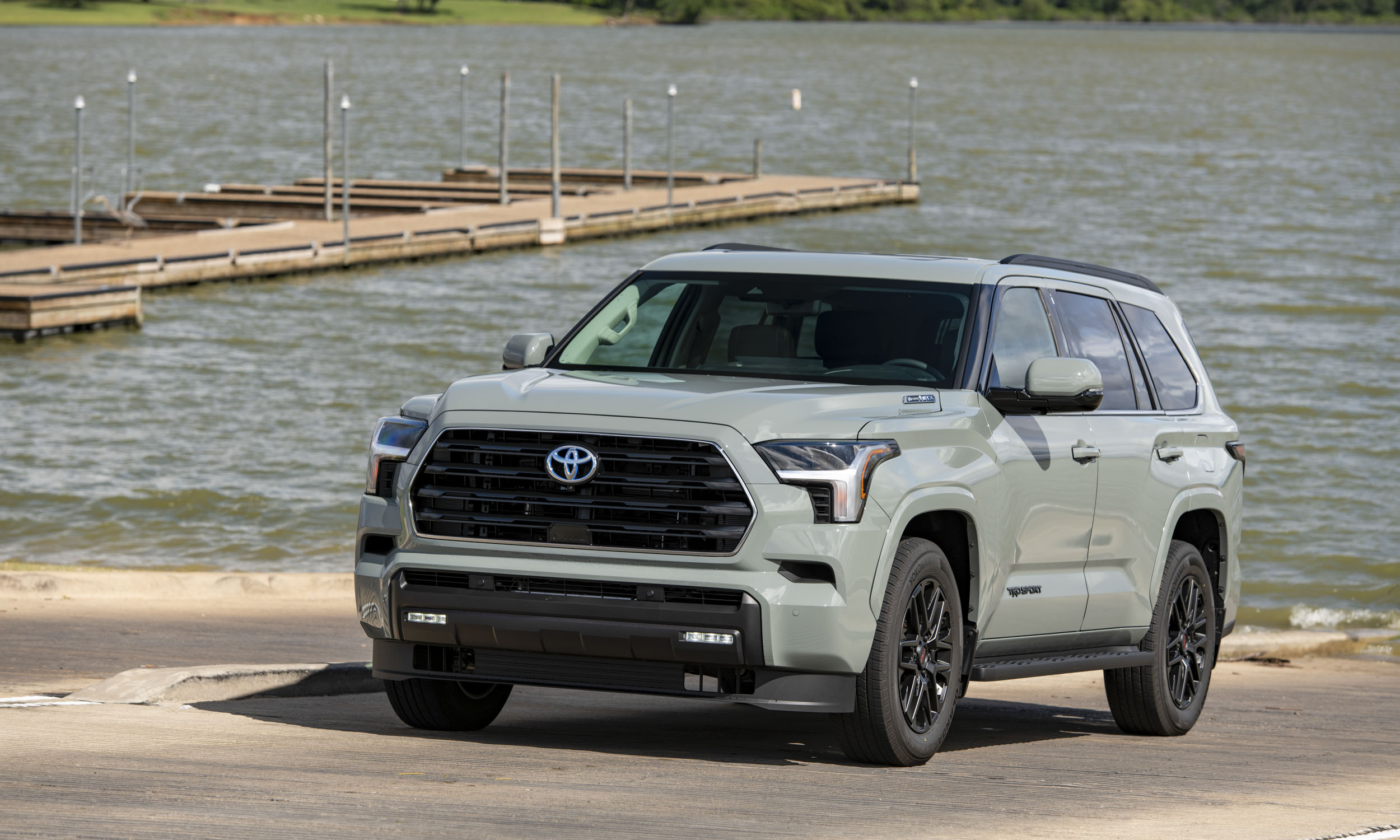 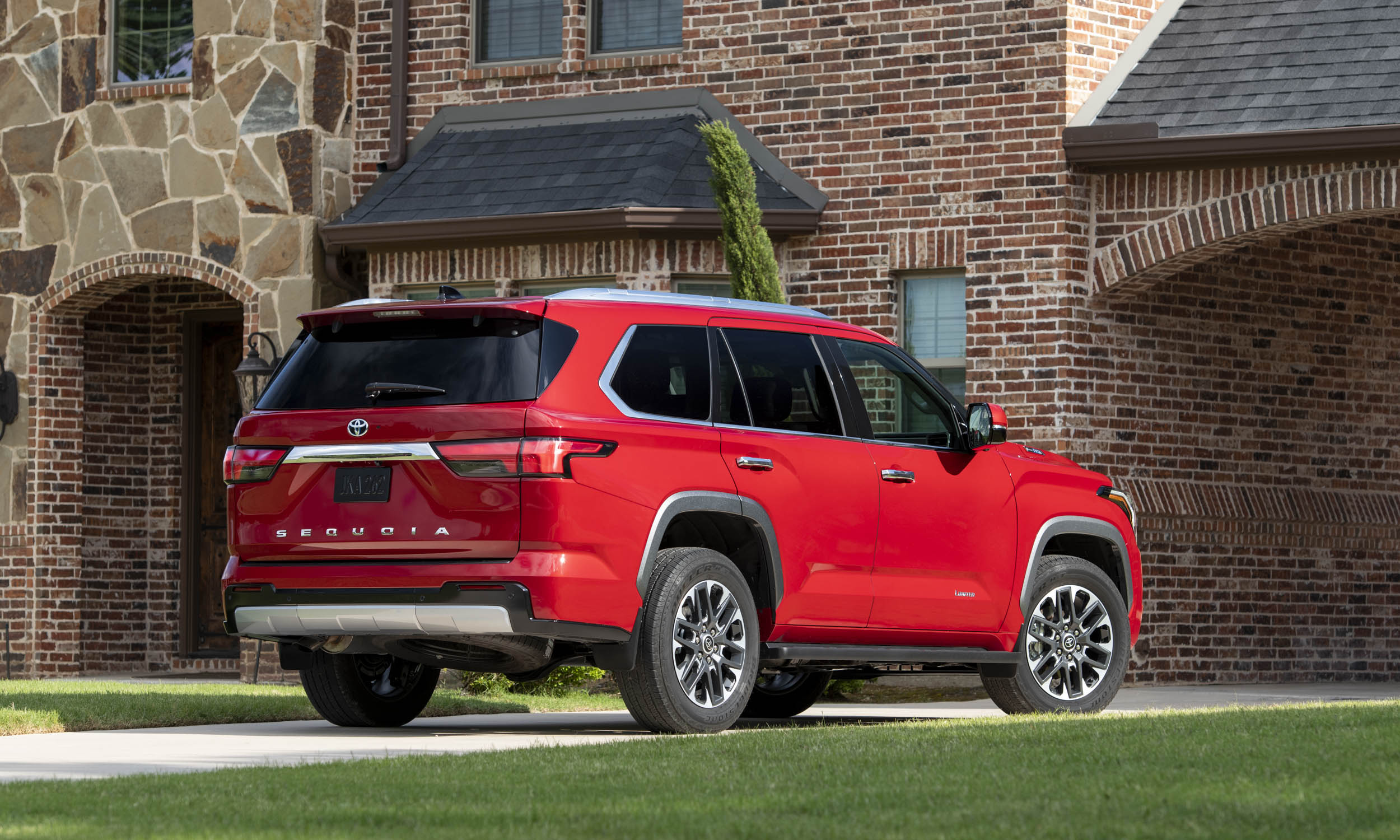 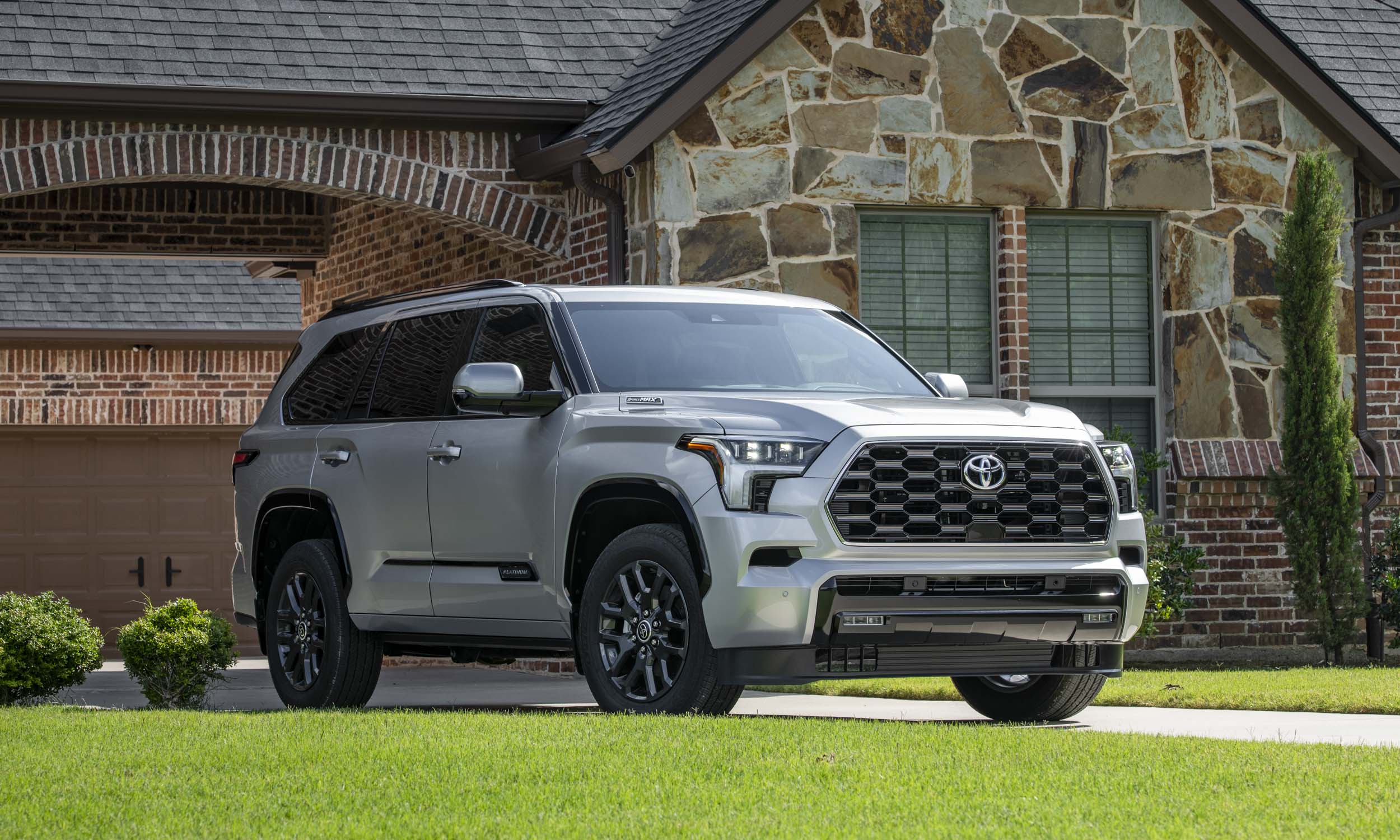 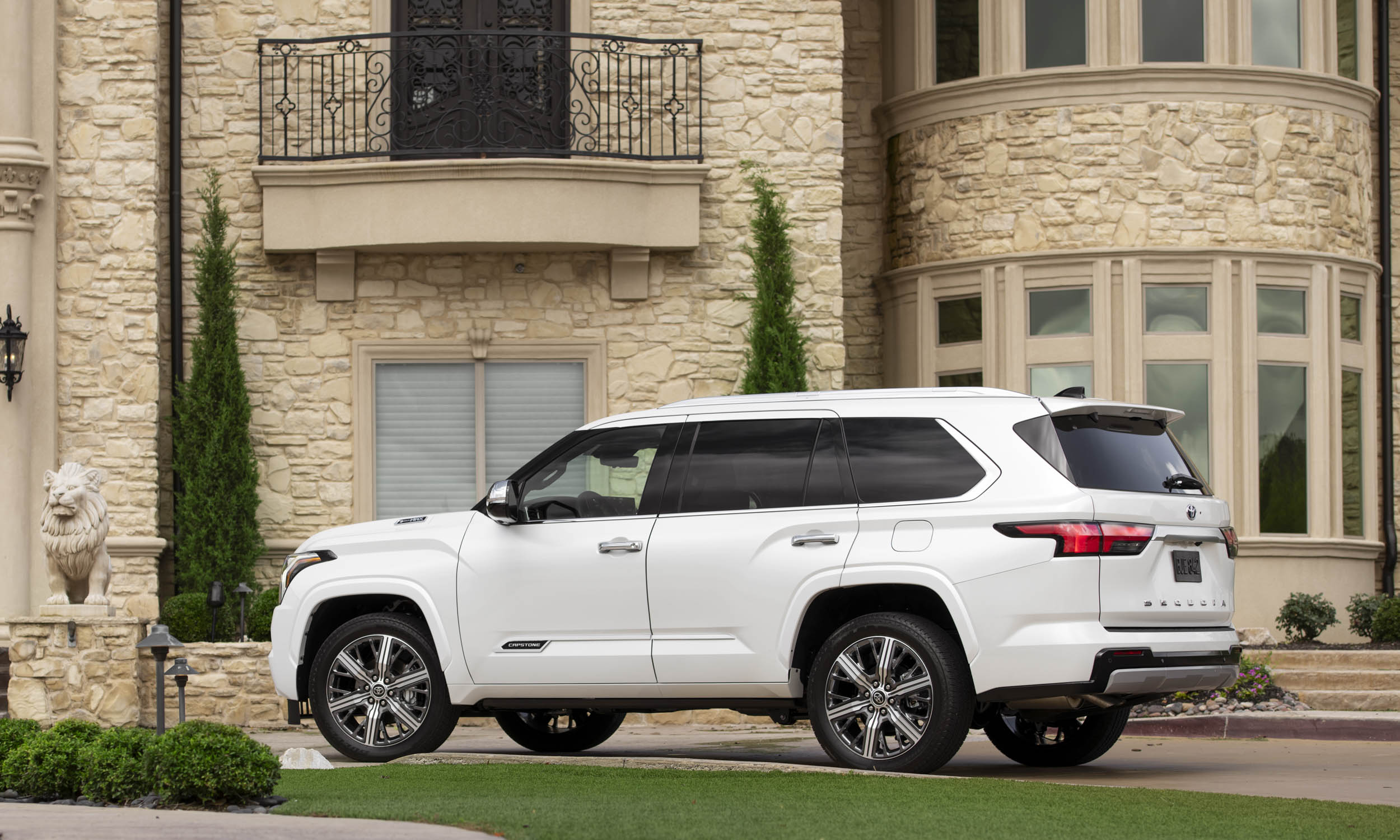 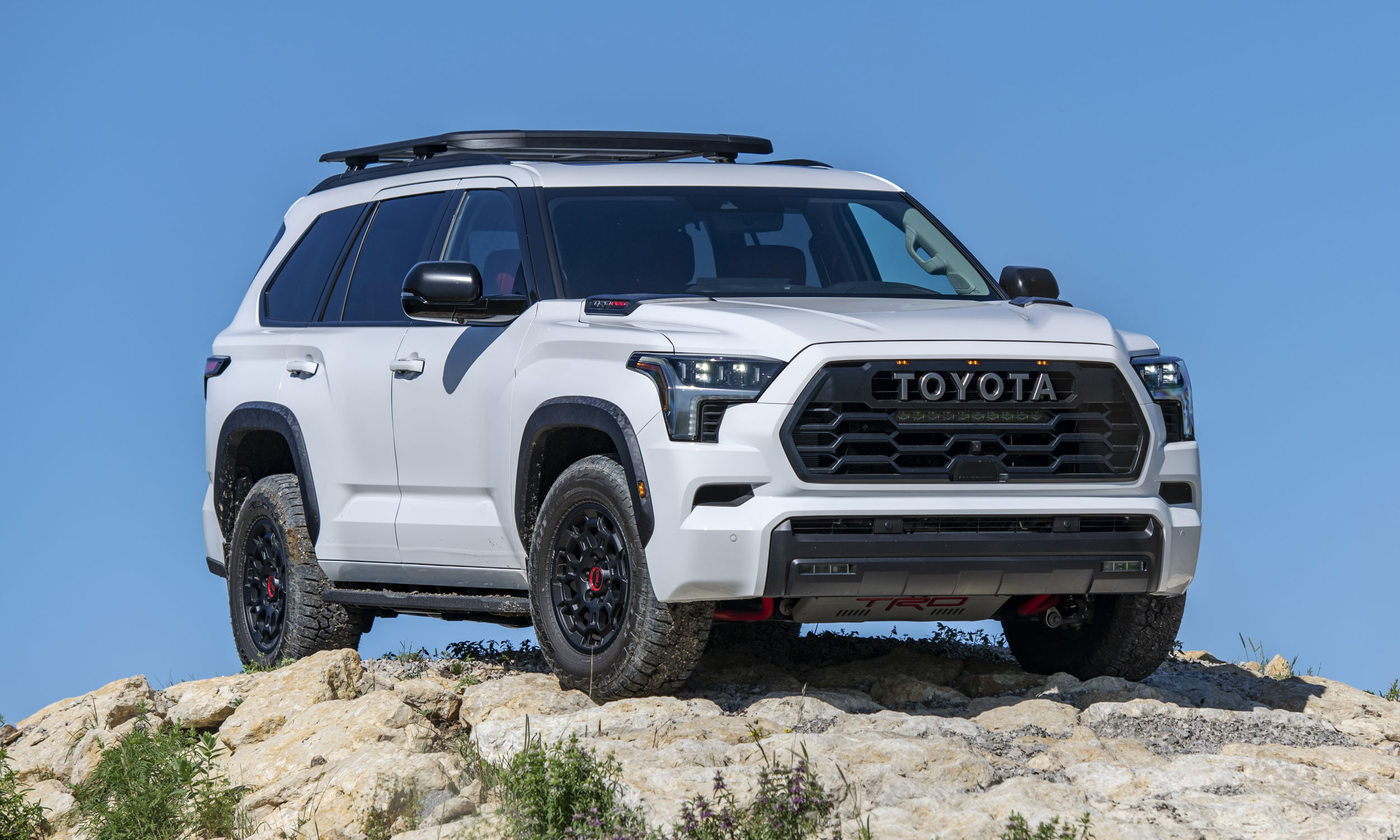 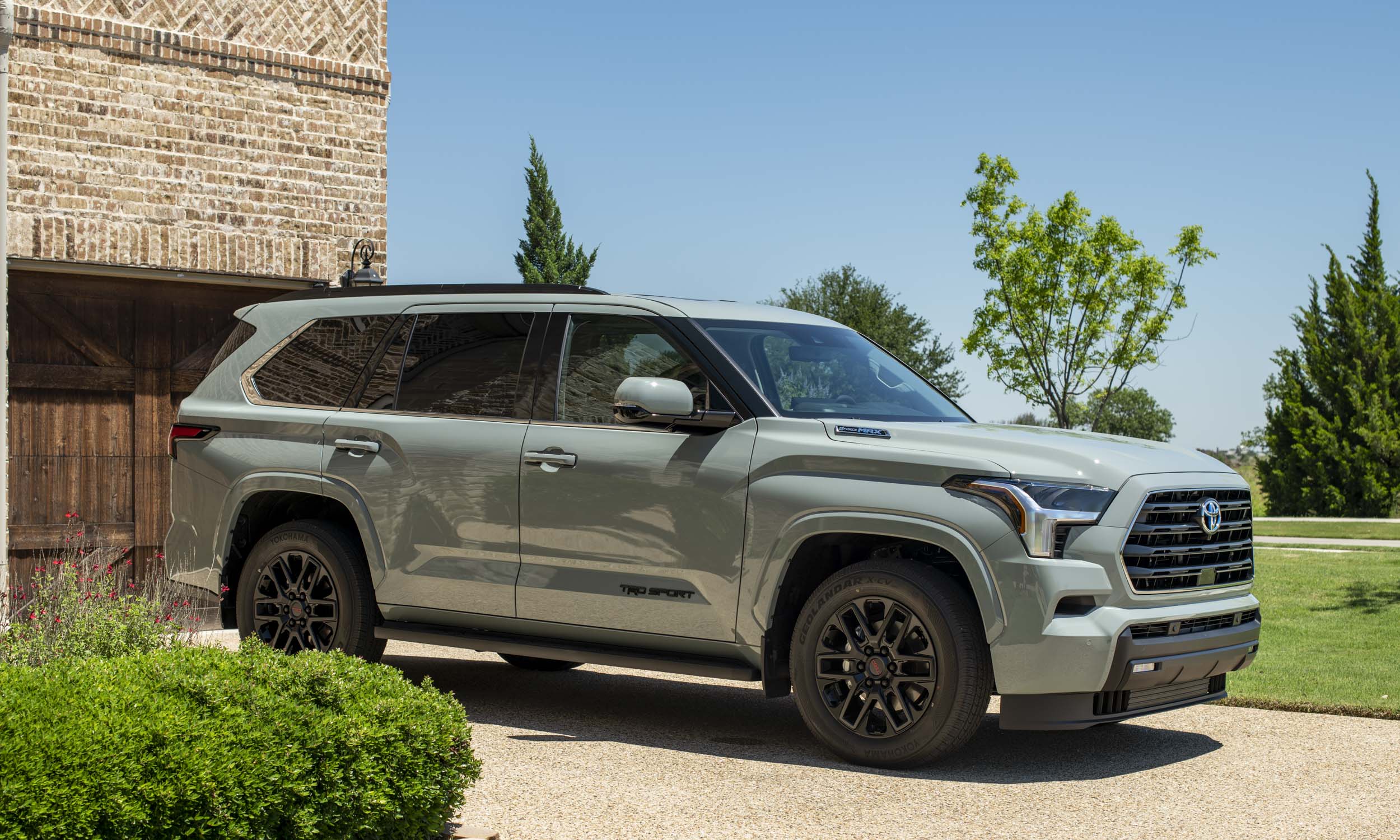 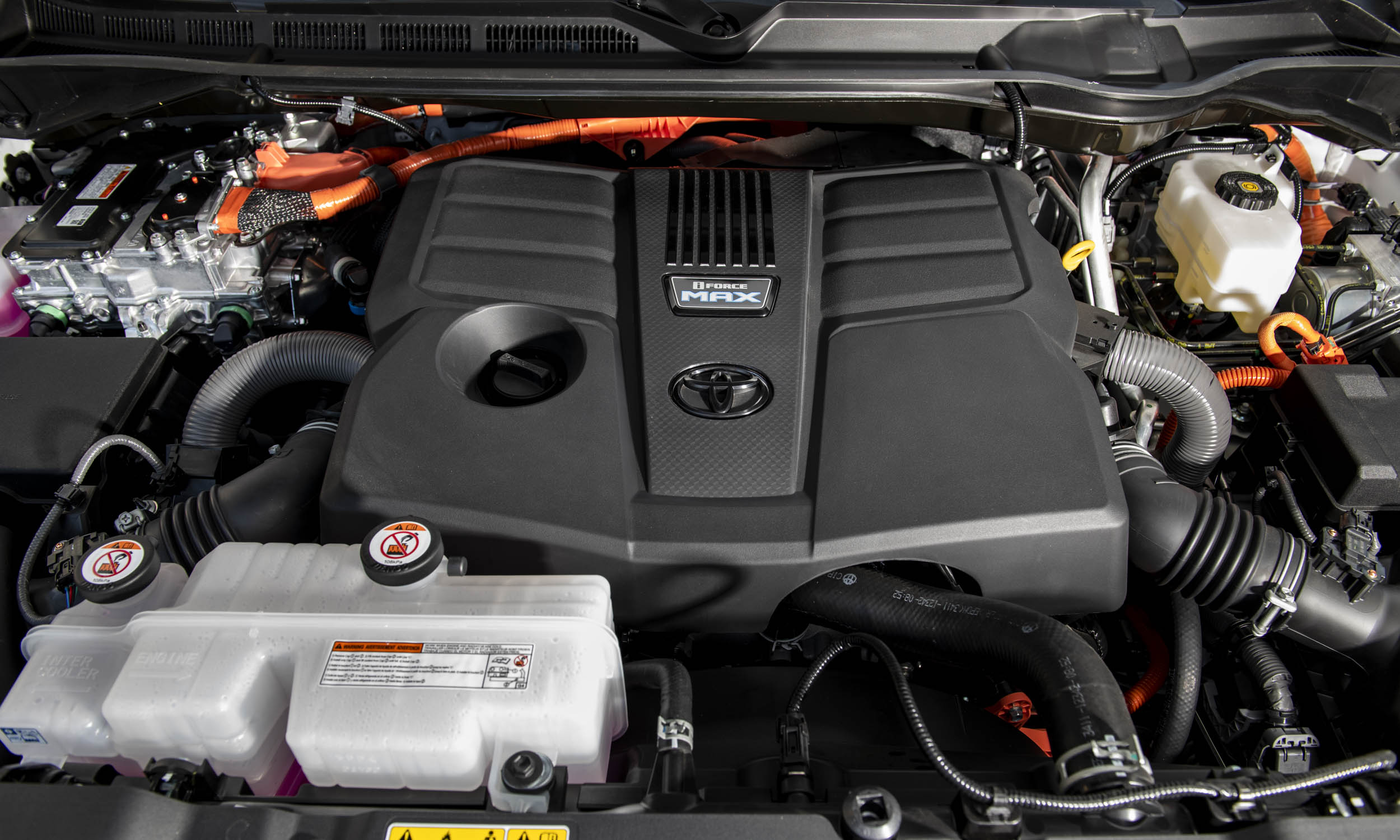 Under the Hood
A twin-turbo V6 hybrid i-FORCE MAX exclusively powers the 2023 Toyota Sequoia — a powertrain first offered on Tundra — producing 437 horsepower and 583 lb-ft of torque. The i-FORCE MAX system features a motor generator positioned between the twin-turbo engine and the 10-speed automatic transmission. The new Sequoia has not received EPA fuel economy ratings, and Toyota has not released fuel economy estimates, but the company expects a large improvement over the outgoing V8-powered Sequoia. Maximum towing capacity is 9,520 pounds for the SR5 2WD and 8,980 for Capstone 4WD, with other trim levels rated in between those numbers. 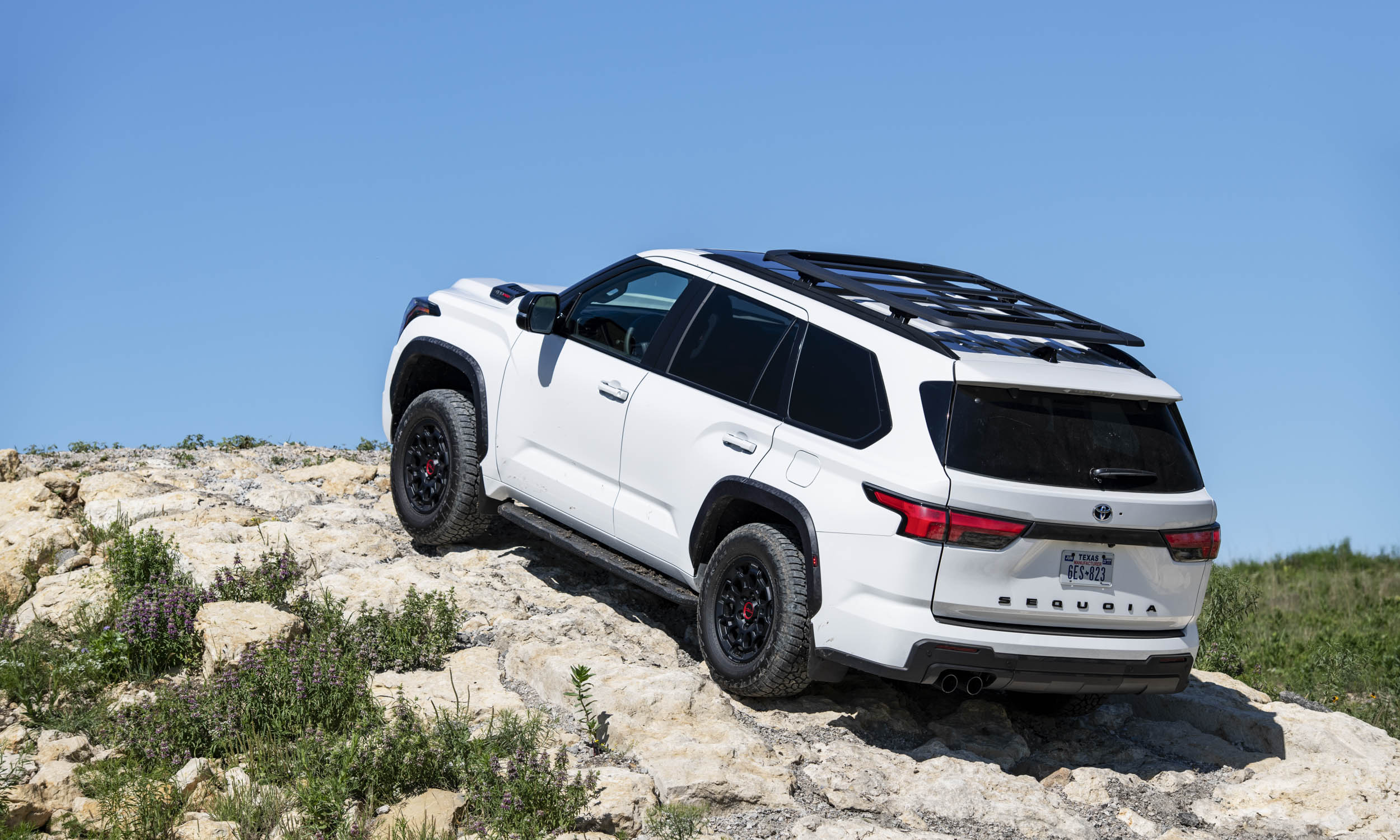 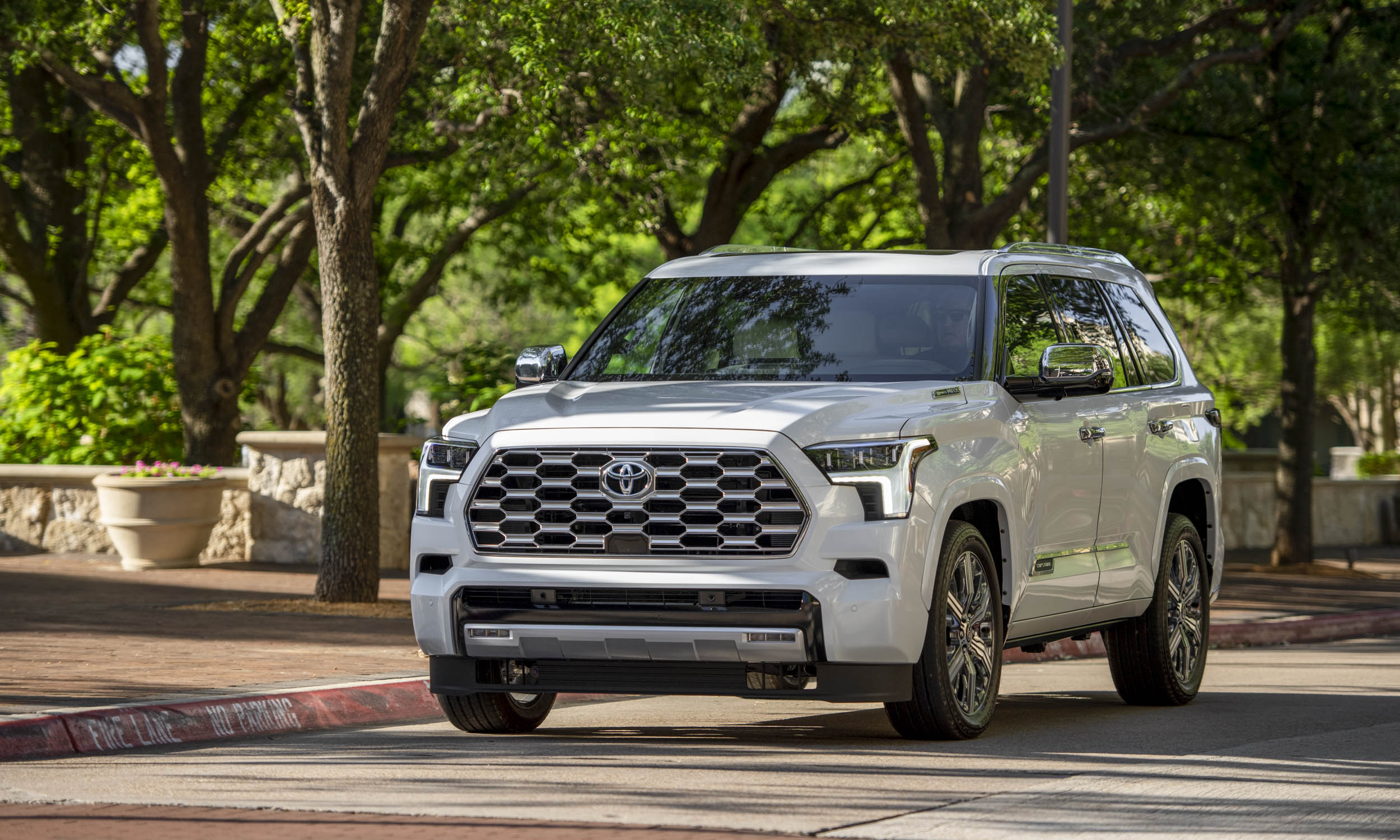 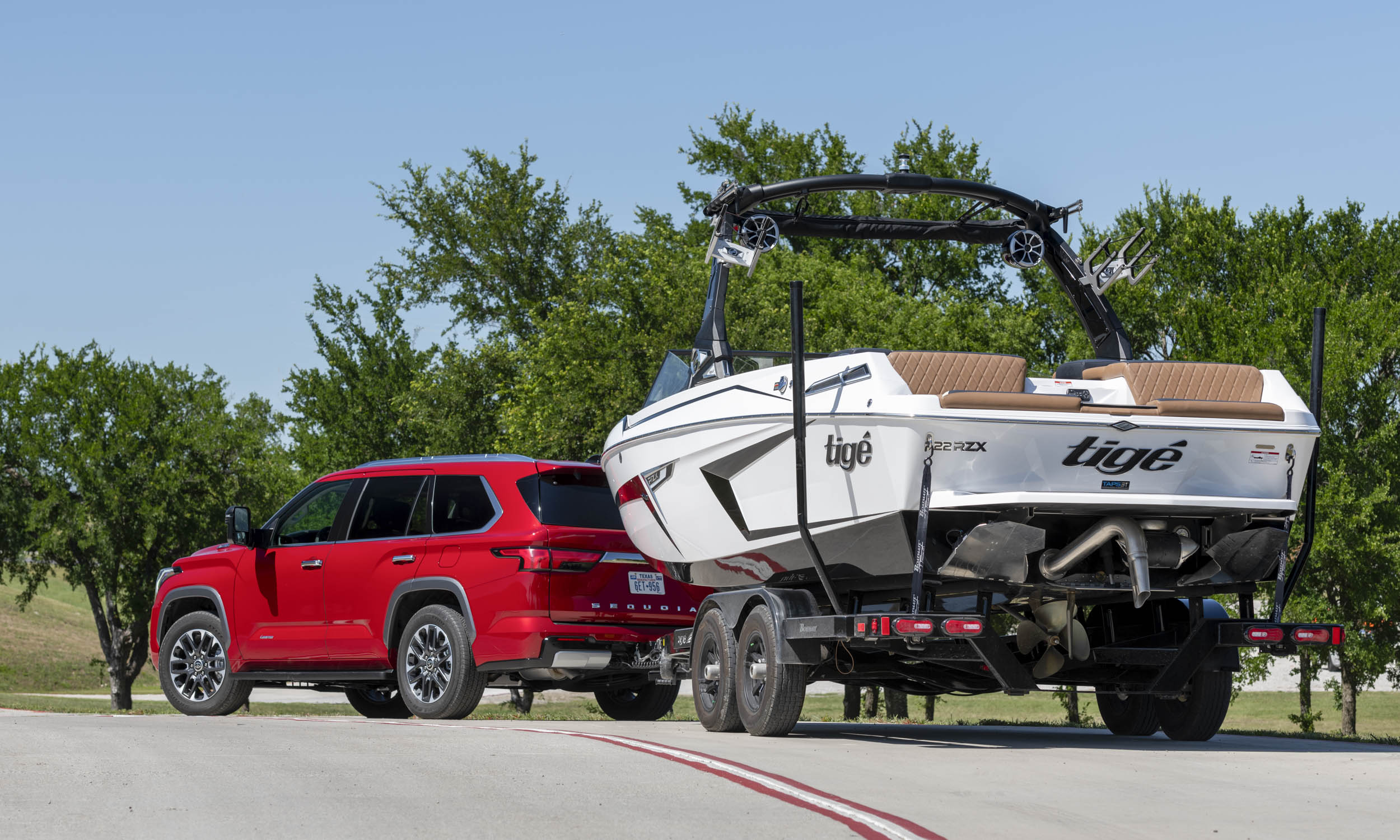 Tow Tech Package
Standard on TRD Pro and Capstone trims and available on all trim levels, the Tow Tech Package includes a trailer backup guide to aid in backing up a trailer. The package also has a straight path assist that adds steering assist to keep the trailer straight on the intended path when backing up, once the driver has positioned the trailer. 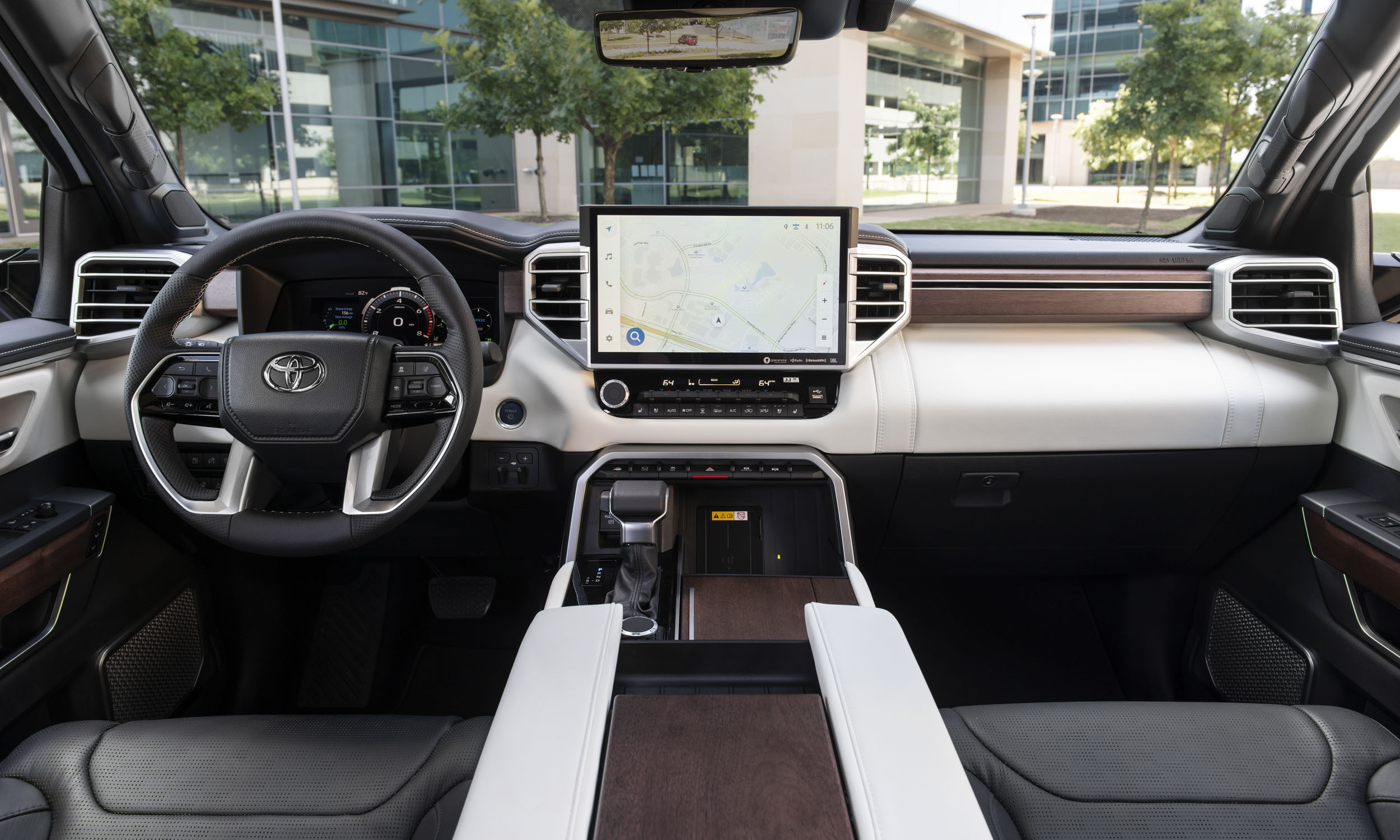 Inner Space
The 2023 Sequoia interior has a fresh, modern feeling and quality materials for all trim levels. The new Toyota Audio Multimedia system sits prominently in the center of the dash, flanked by vents with climate control function buttons below. The 14-inch screen is optional on the SR5 and standard on all other trim levels. The center console is well organized and useful. The new flagship Capstone has an upscale vibe with leather and wood trim with exclusive color options. 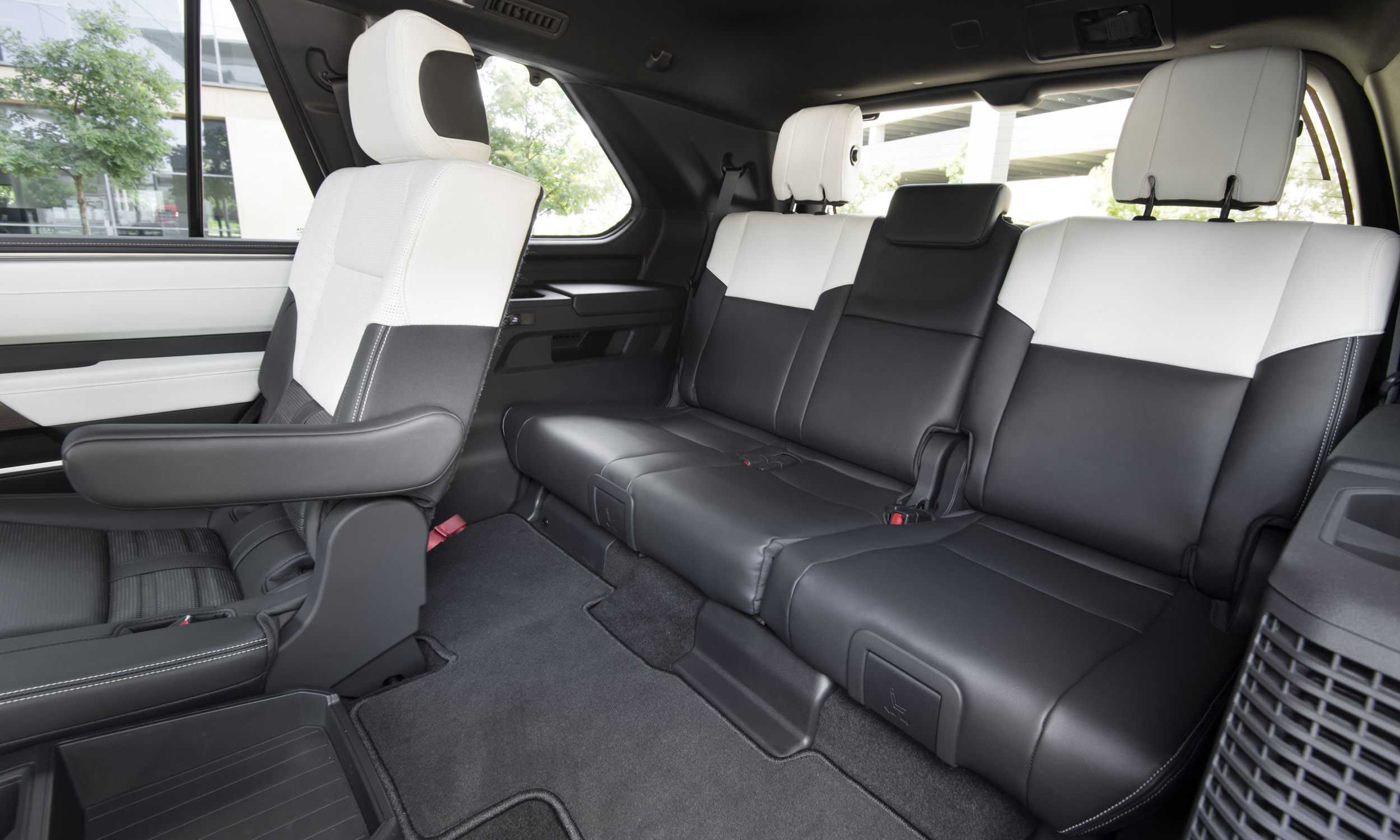 Standard Third Row
The folding third-row seat is standard for all trim levels, offering 8-person occupancy for SR5 and Limited with a second-row bench, and 7-person seating for other trim levels with second row captain’s chairs. The third-row seat slides 6 inches fore and aft to accommodate passengers or increase cargo capacity behind the third row; it can be folded down but does not fold flat to the cargo floor. Toyota also adds an adjustable cargo shelf system with a removeable shelf that can be set in different positions, including flat with the folded rear seat. The third-row seat cannot be removed. 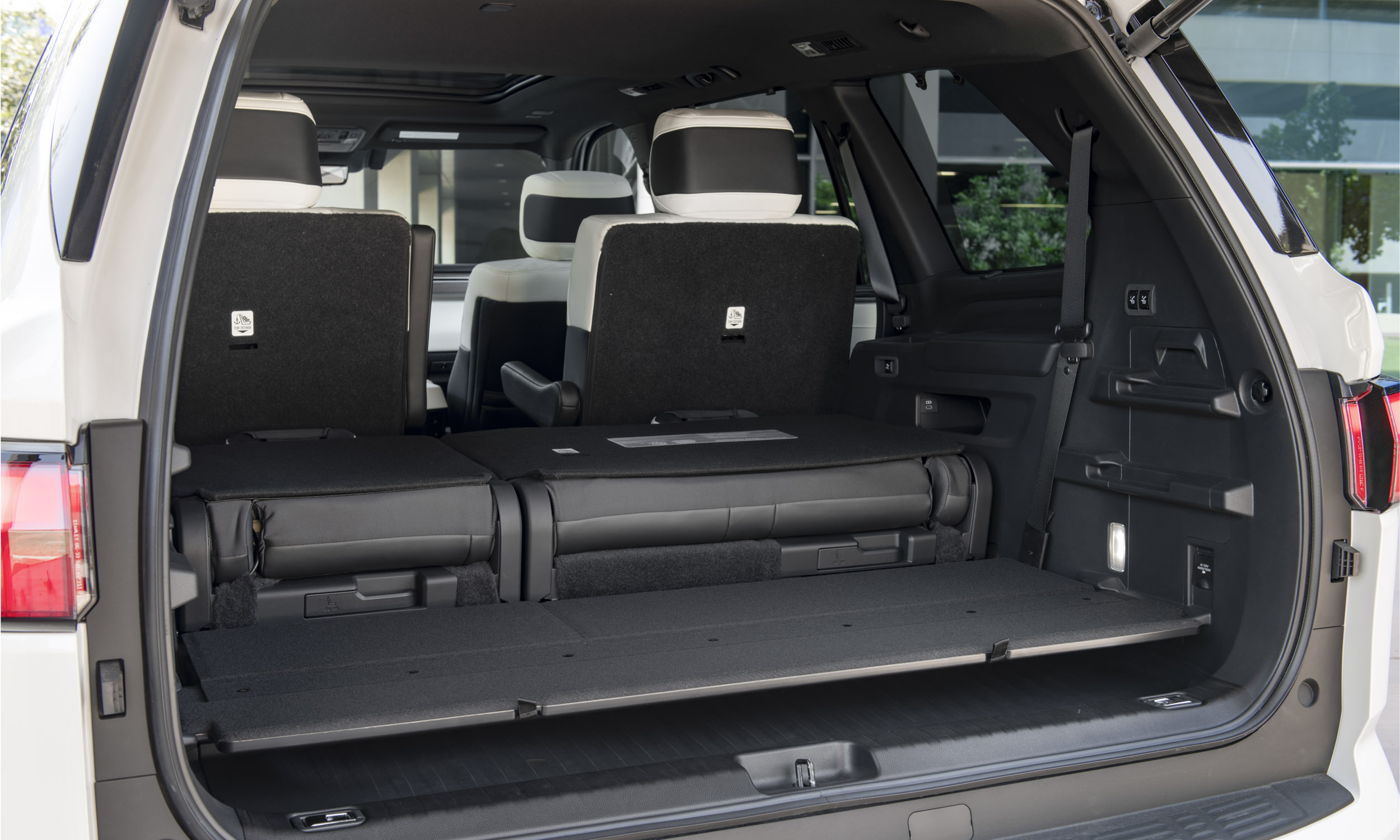 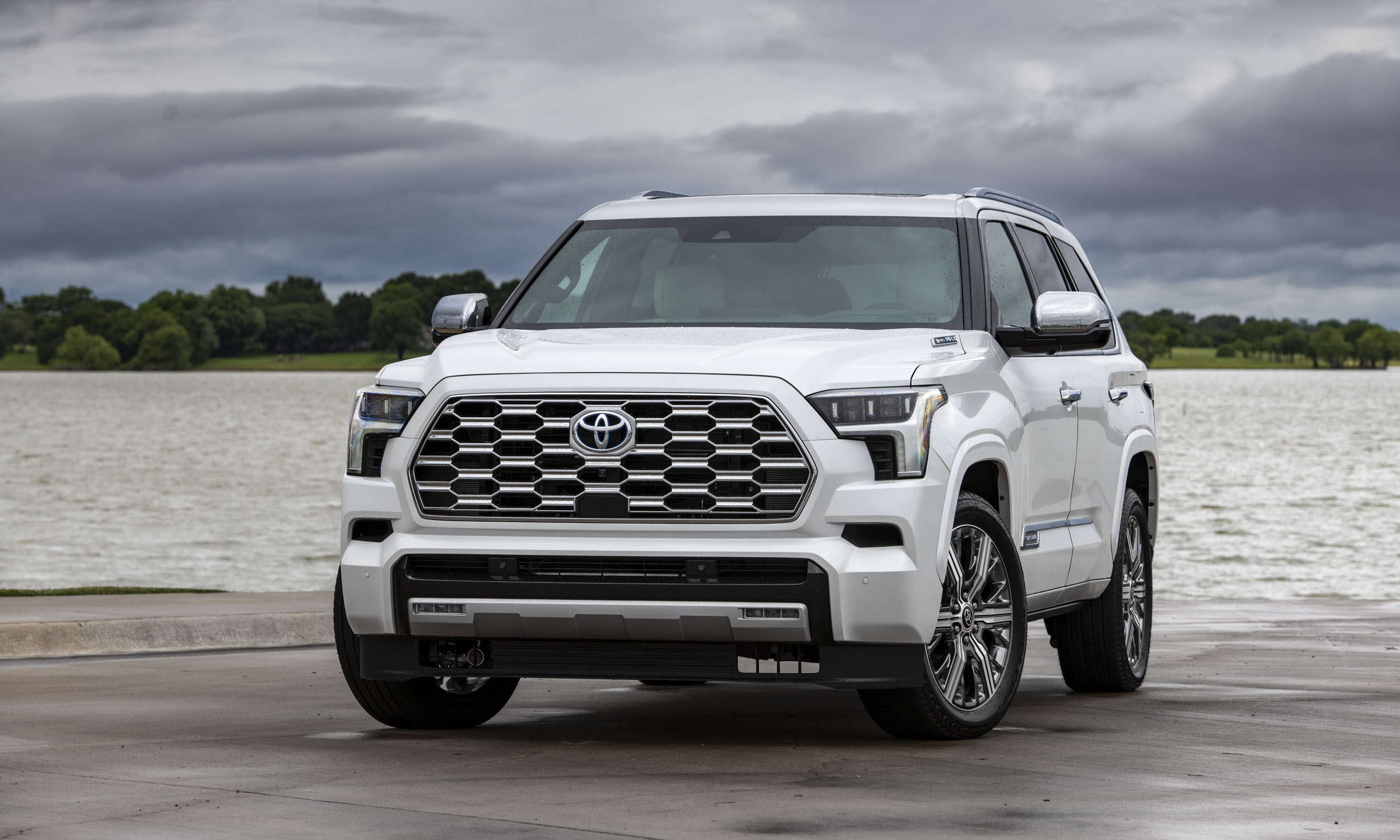 Bold Design
Sharing exterior design elements with the new Tundra, the bold new Sequoia design is a big departure from the previous generation with a large, aggressive grille and deeply sculpted fenders. The five trim levels are distinguished by differing grille treatments, wheels and other trim elements. 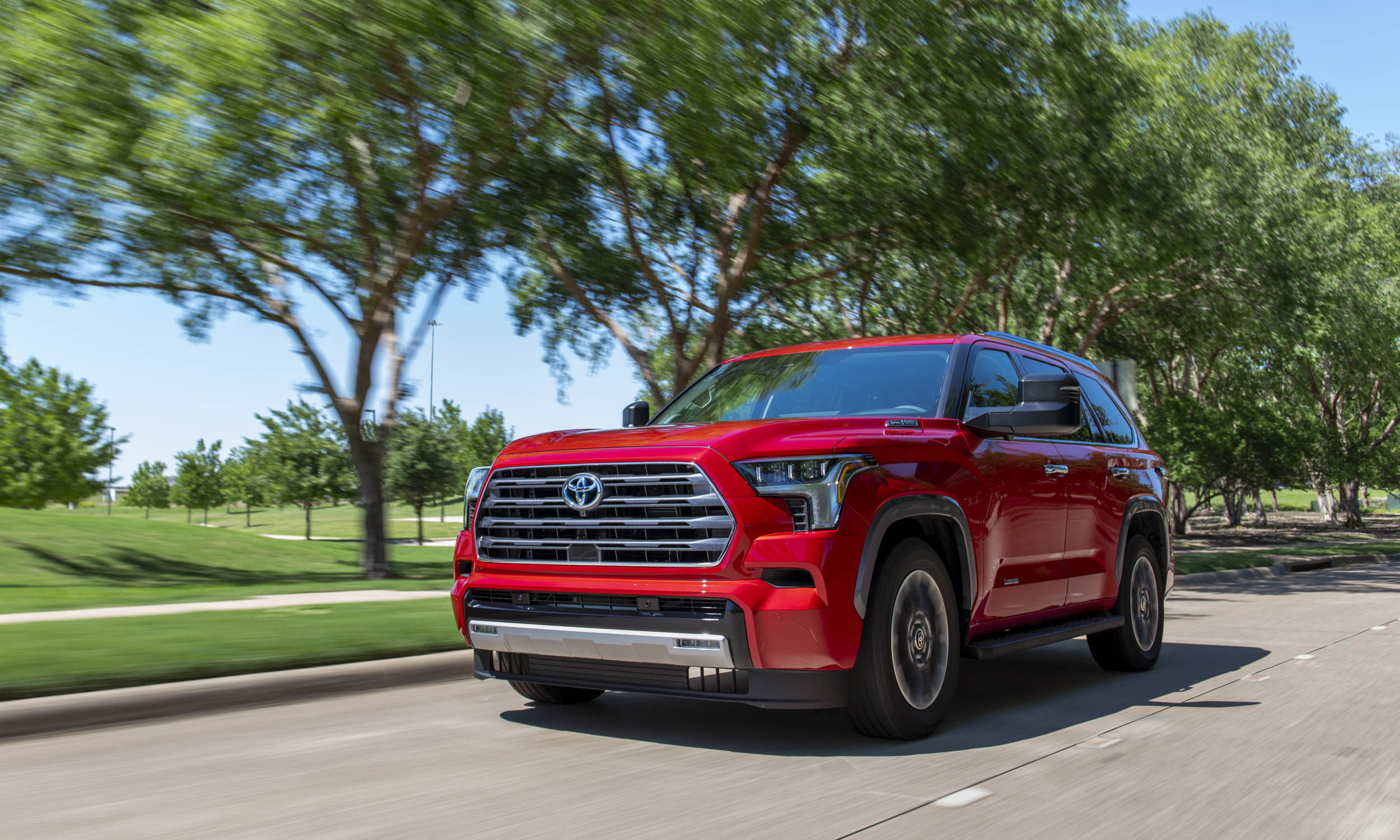 On the Road
As a full-size, body-on-frame SUV, the 2023 Toyota Sequoia is a big vehicle, but the powerful i-FORCE MAX hybrid drivetrain is up to demanding use with plenty of power to give the vehicle good overall drivability. The Sequoia has plenty of power to pull out in traffic or merge onto highways, and there is always power on tap when needed. The 4-wheel drive is a part-time system that does not offer an automatic setting, which is common among competitors. 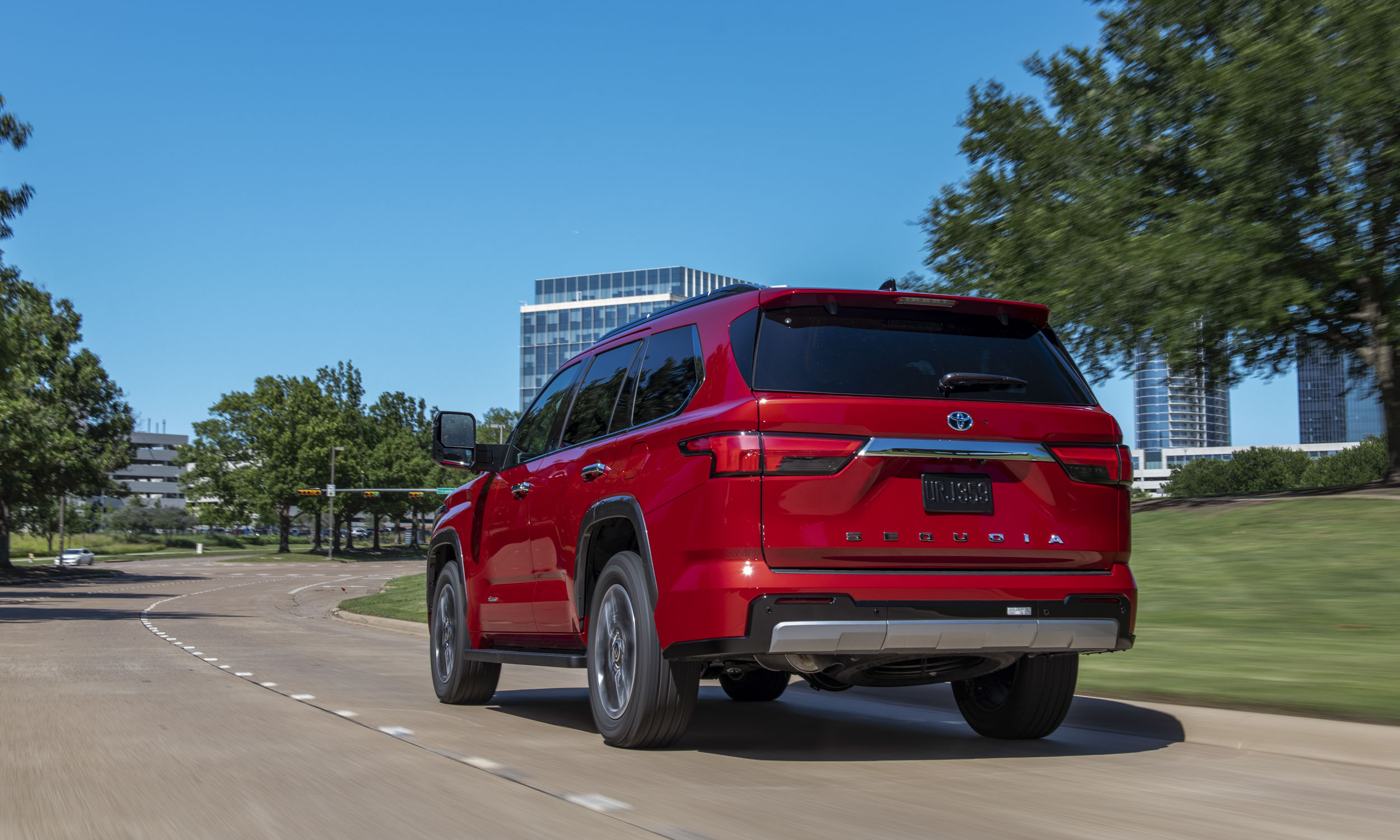 On the Road
The steering response of the 2023 Toyota Sequoia feels fine for such a large vehicle, but not as good with the TRD Off-Road package — which is to be expected with the all-terrain tires. But that is a tradeoff to be considered for the additional capability in off-road conditions. The ride can be a bit rough on some road surfaces, likely attributed to the lack of independent rear suspension. With the air suspension and adaptive variable suspension it felt better in Comfort mode compared to Normal or Sport, but just more muted. 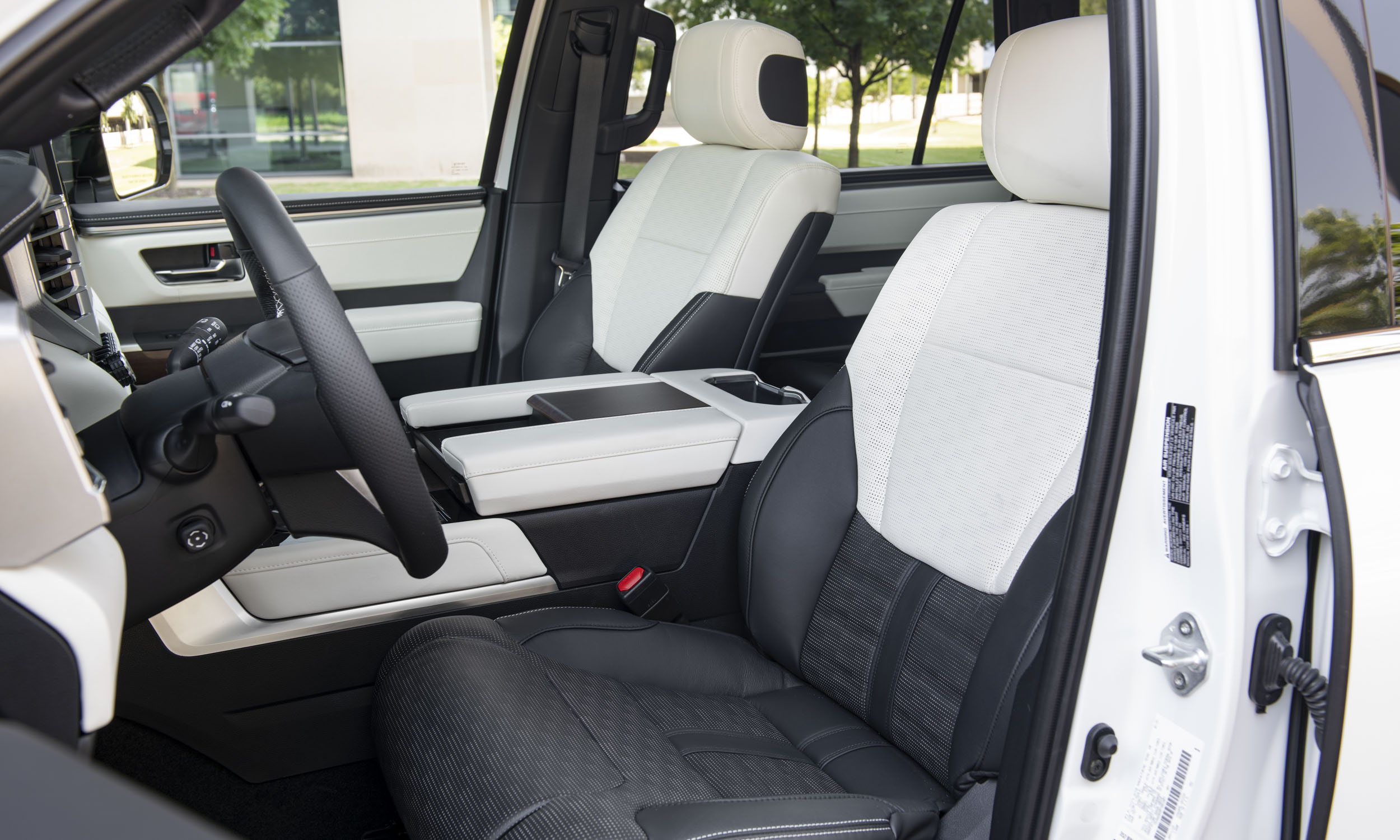 Sequoia Interior
The new Sequoia interior has a bold, aggressive design similar to the exterior, while the digital instrument cluster and 14-inch touchscreen give the SUV a modern, high-tech feeling. The new Toyota Audio Multimedia system is intuitive and easy to use, and we like the separate climate control buttons positioned below. Each trim level offers nice materials and color combinations, and the new Capstone adds even more luxury. The TRD Pro is the most sporty option. Third-row seating is tight and likely most comfortable for younger passengers for short trips. 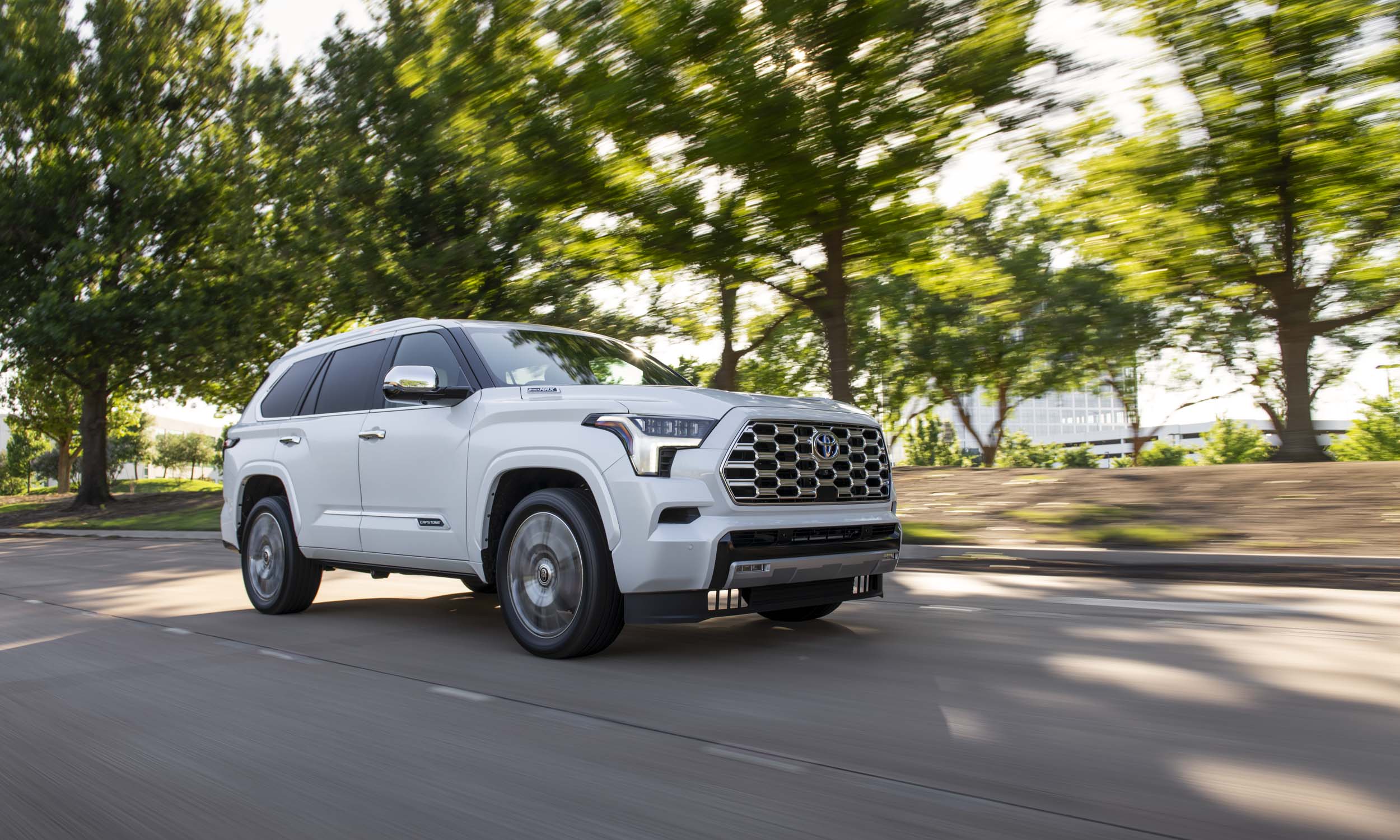 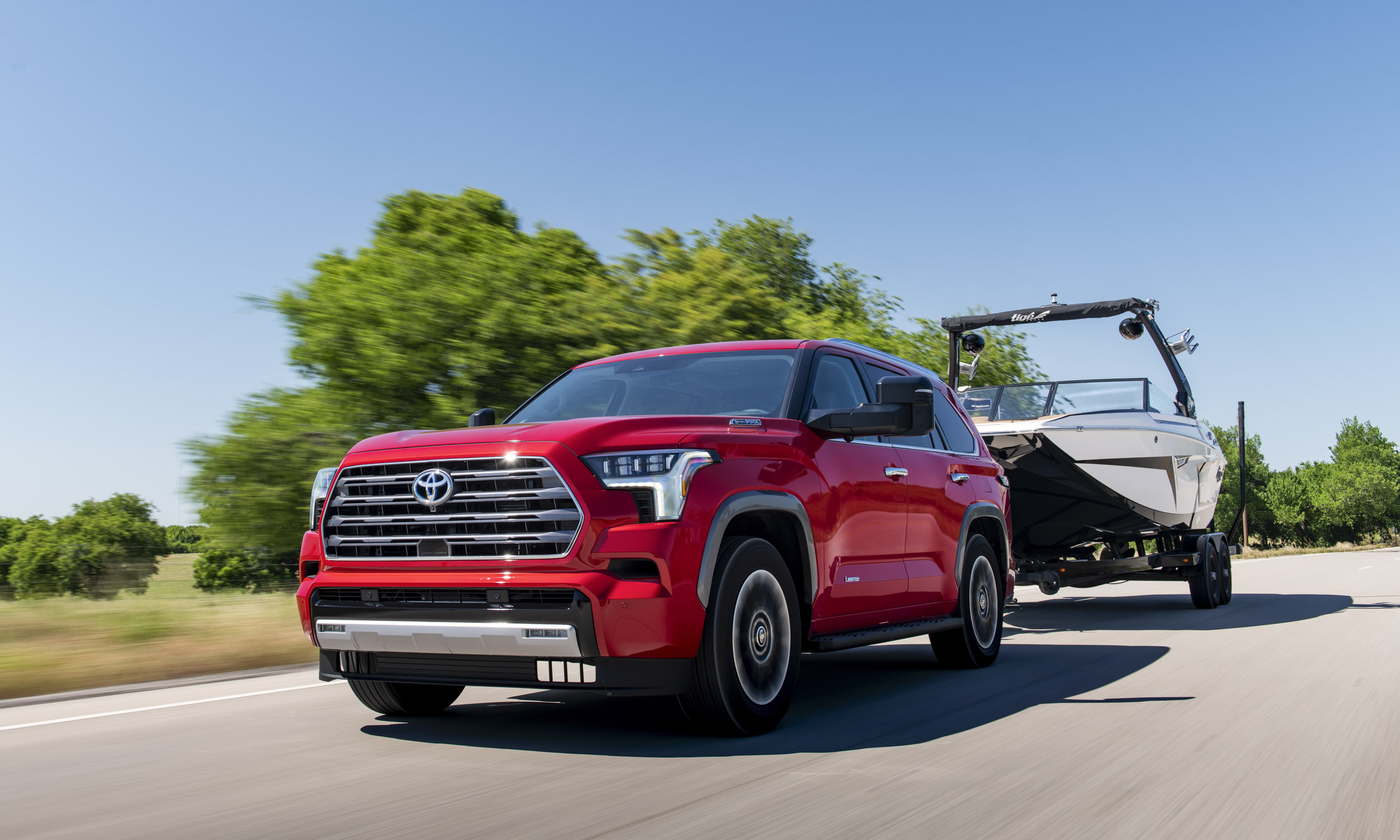 Tow Vehicle
Many buyers who choose a full-size SUV plan to use it as a tow vehicle ,and at a press event we had the opportunity to tow a boat and trailer weighing 7,500 pounds. We pulled out onto a highway with a 70 mph speed limit and used all the big vehicle’s resources to get up to speed as quickly as possible. There is enough power to be comfortable with that weight, but we wouldn’t recommend going much higher. Once at highway speeds the Sequoia felt stable and comfortable even with the weight behind. 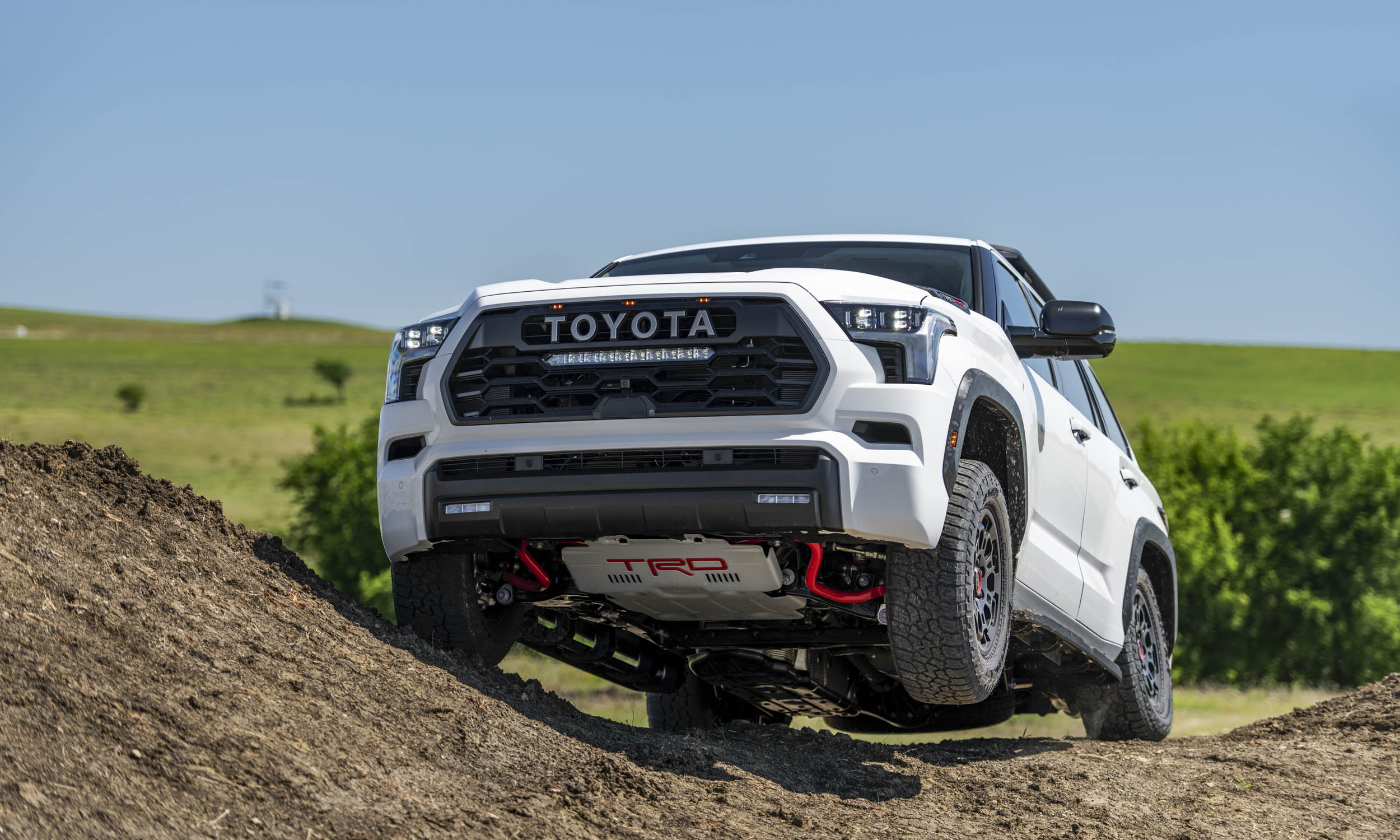 Off-Road
Unfortunately we didn’t have a chance to try the new Sequoia off-road, but we would expect it to perform similarly to the Tundra in off-road conditions. The Sequoia SR5 or Limited with the TRD Off-Road Package should handle more difficult situations, and the TRD Pro would be the most capable option. 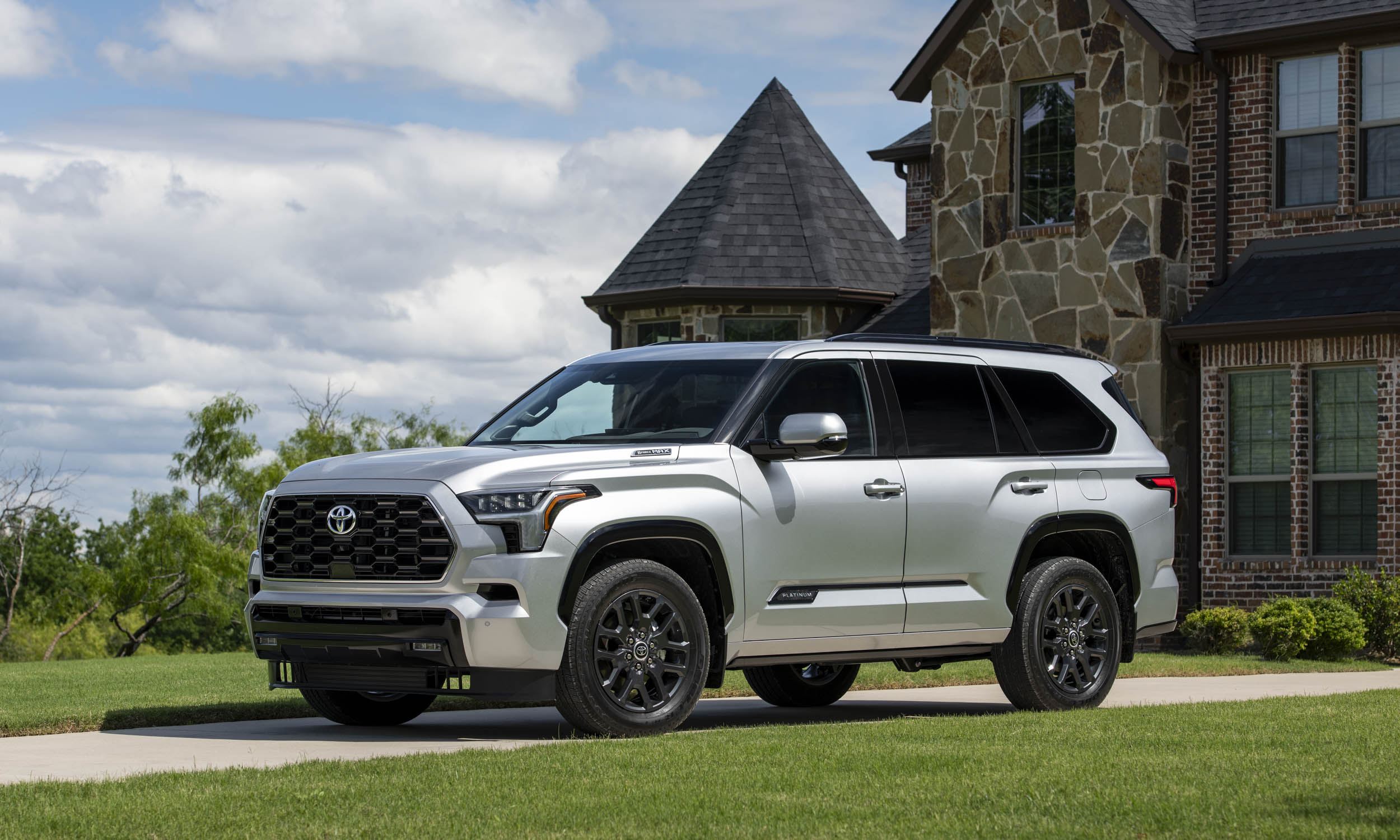 Right for You?
The 2023 Toyota Sequoia offers a bold new look, a modern interior and five trim levels, all powered by the 3.5-liter V6 i-FORCE MAX hybrid drivetrain. The Sequoia drives well although the ride is a little rough, and cargo space is down from the previous generation. The Platinum takes the interior upscale with the Capstone as the new luxury version. The Sequoia is a decent tow vehicle for a boat or a small trailer. Shoppers seeking a full-size SUV with comfortable room for five and cargo, who also plan to do some towing, should consider the 2023 Toyota Sequoia. 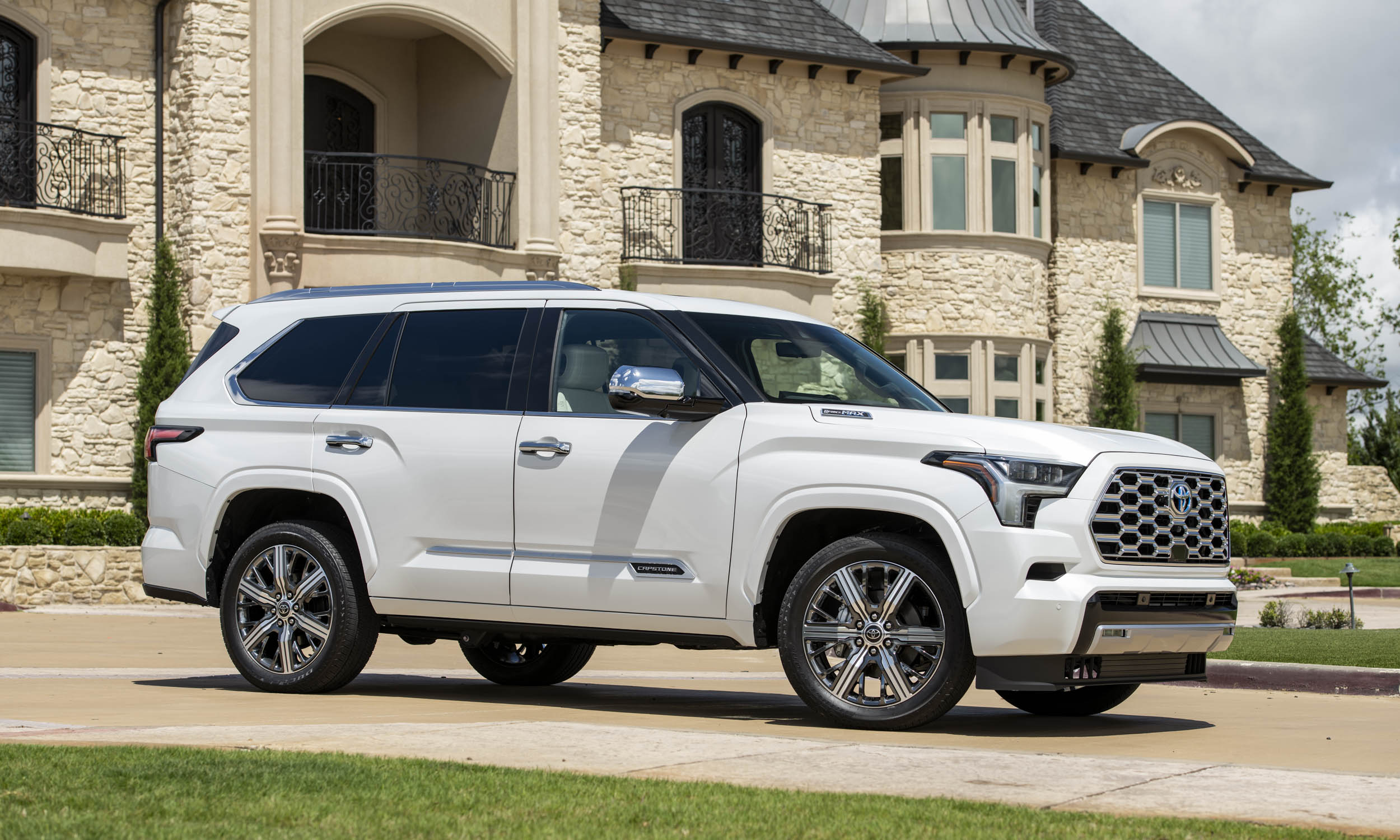 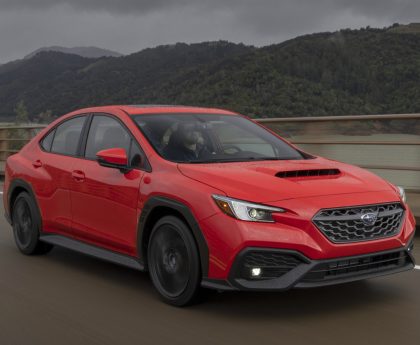 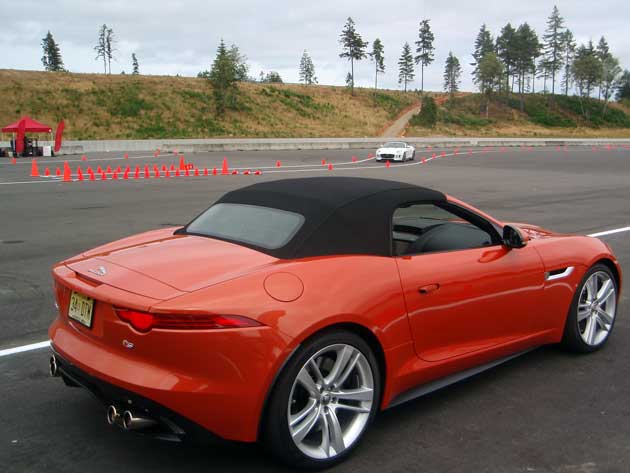