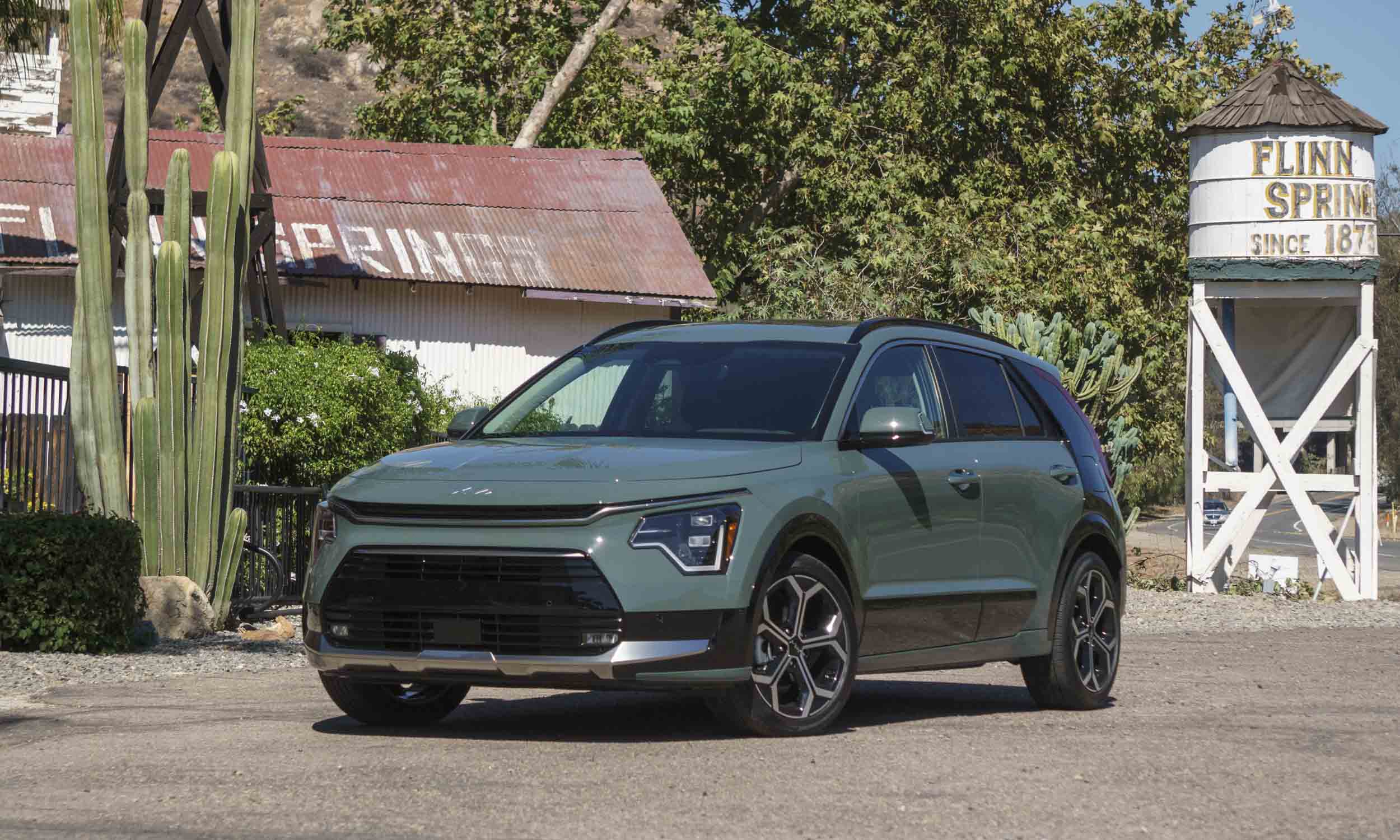 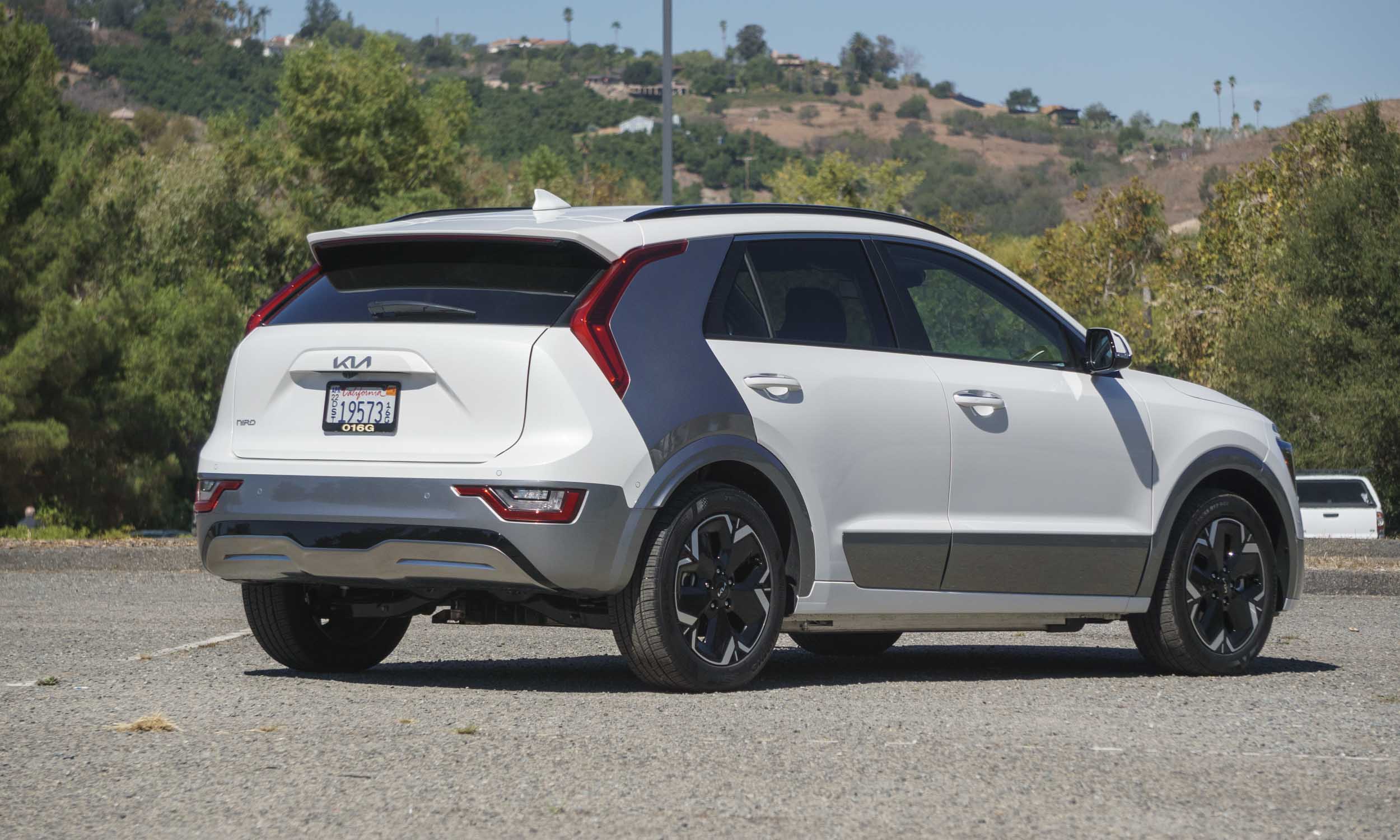 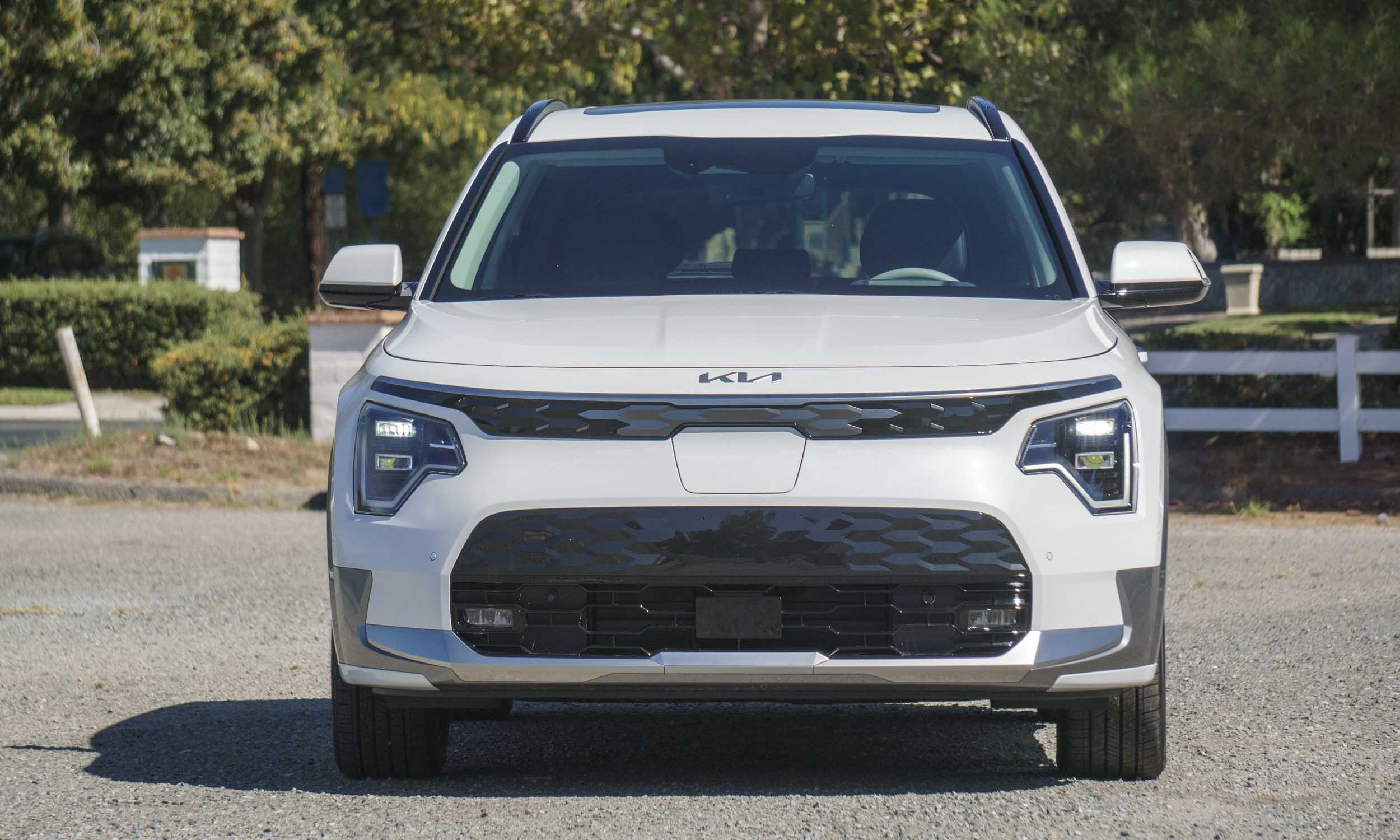 Design Changes
Longer and wider than the previous generation, the 2023 Kia Niro possesses stylish headlights integrated with upswept LED running lights. These flank a new iteration of the brand’s signature tiger nose grille, which is much slimmer in a style similar to the recently updated Kia Sportage. The HEV and PHEV have similar styling, while the Niro EV gets a solid grille that also features the charging plug up front. 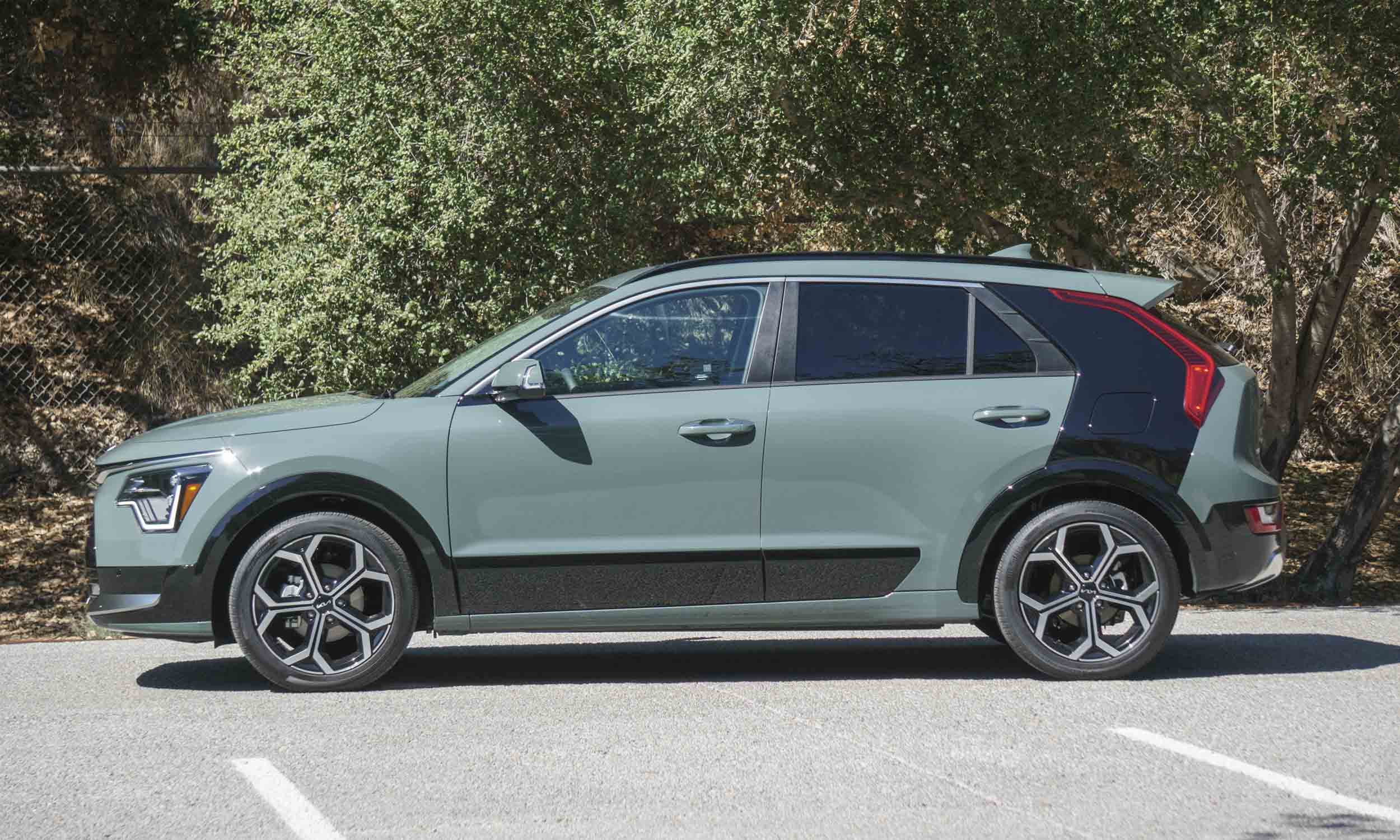 Silhouette with Aero Blade
Helping the new Niro stand out from its predecessor — and other small crossovers — is the Aero Blade positioned behind the rear door. The functional blade –airflow behind it improves aerodynamics — is available in contrasting colors, giving the Niro a unique design element. The standard blade is the same color as the rest of the vehicle. For additional contrast, the updated Niro features dark cladding along the bottoms of the doors for the HEV and PHEV, and dark or silver cladding for the EV depending on exterior color choice. 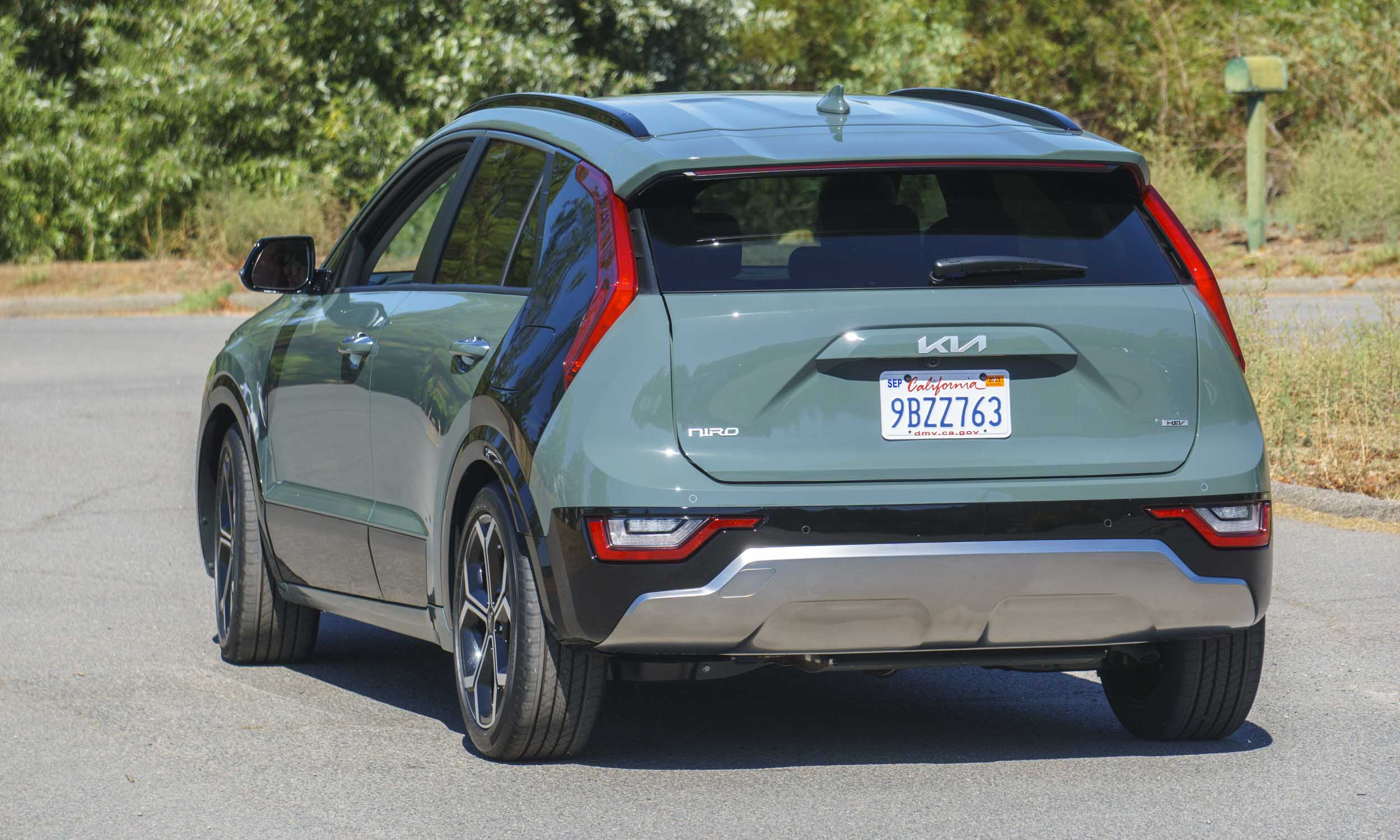 Rear View
At the rear of the 2023 Kia Niro, slim boomerang-shaped LED taillights with backup lights make a strong statement, as well as turn signals integrated into the rear bumper. Exhaust outlets are hidden on the HEV and PHEV — they’re nonexistent on the EV. 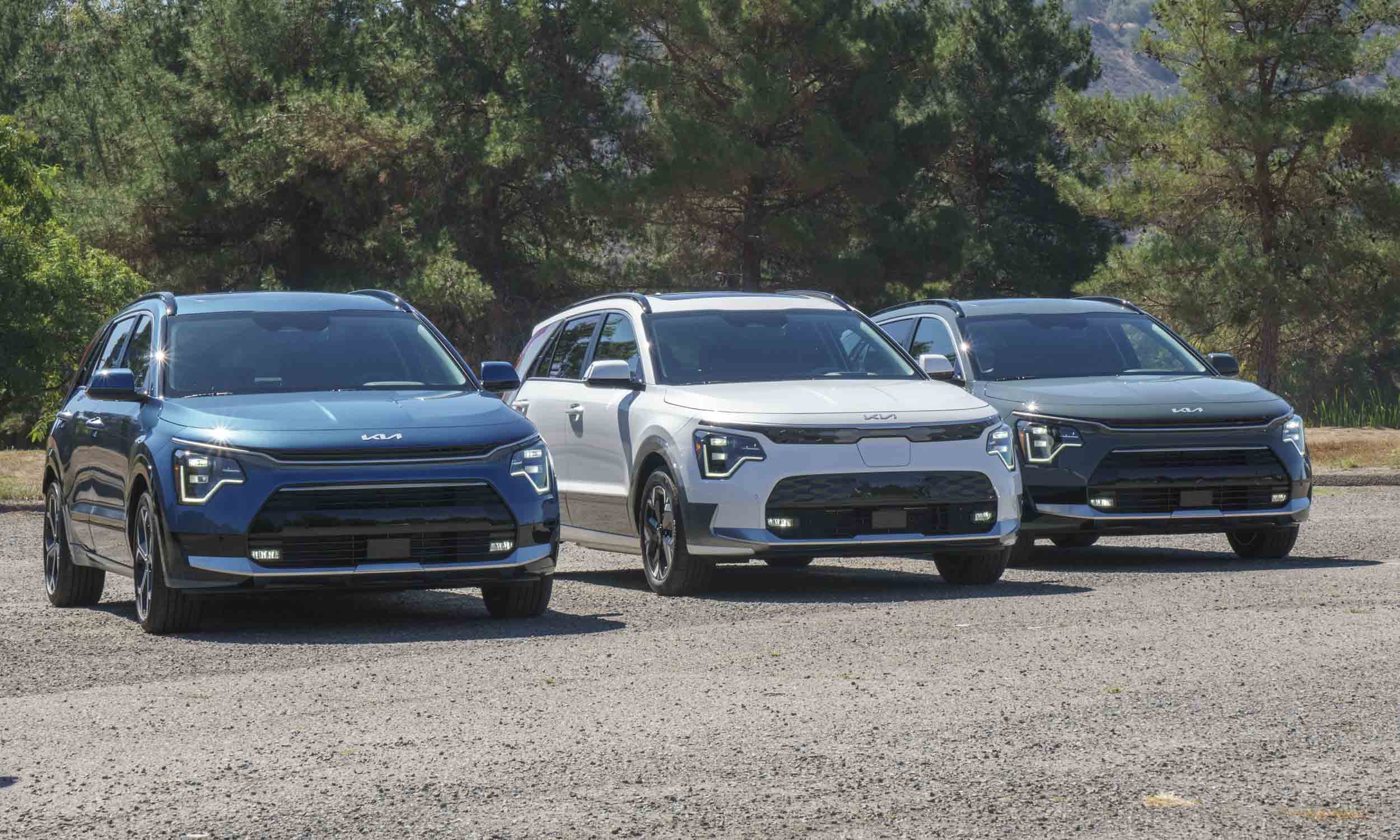 Model Lineup
Kia offers the 2023 Niro HEV in LX, EX, EX Touring, SX, and SX Touring trims; Niro PHEV in EX and SX trims; and Niro EV in Wind and Wave trim levels. The Niro HEV starts at $26,490, while the Niro PHEV has a base price of $33,740. Niro EV pricing has not been released. 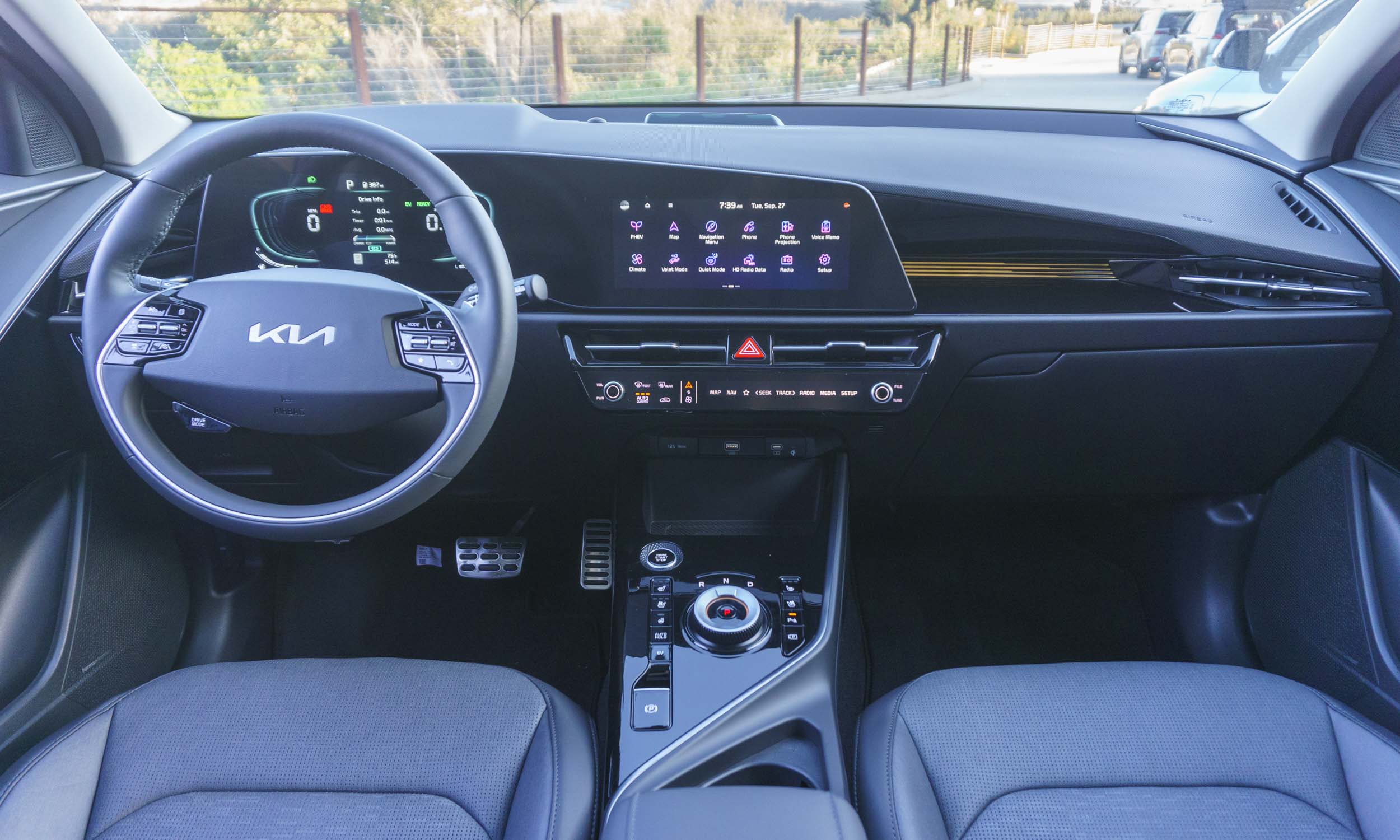 Inner Space
Even though the 2023 Kia Niro may be at the entry-level side of the brand’s lineup, the interior feels quite the opposite. When entering the Niro, shoppers will be impressed by the interior’s premium vibe, primarily due to a large screen that spans most of the dashboard. Consisting of dual 10.25 displays, the driver display and infotainment system all appear as a single unit. 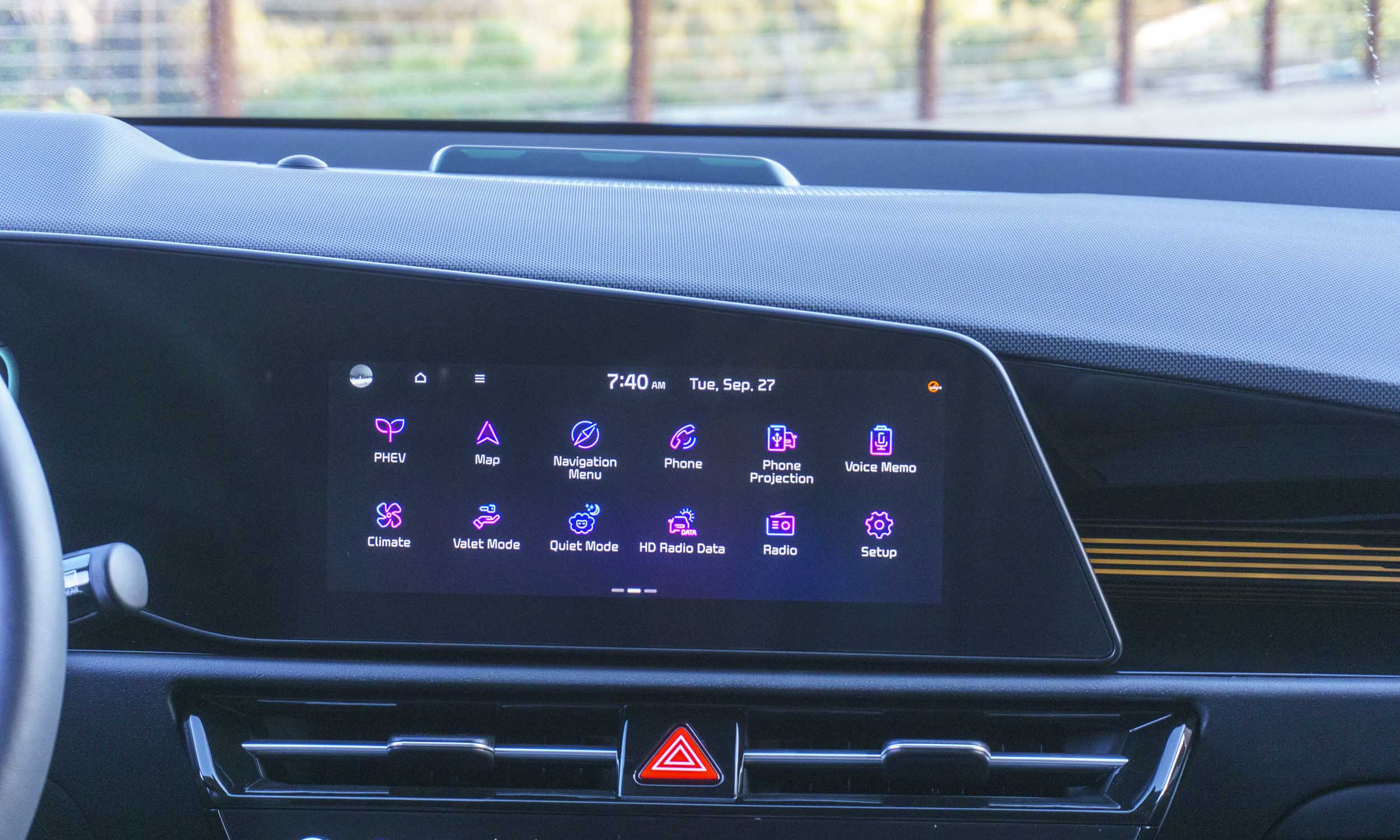 Infotainment
With large, easy-to-read icons and a “swipeable” screen, Kia’s infotainment system is one of the more intuitive offerings on the market. The interface can be via touchscreen or voice, and both work well. Activating the voice recognition via a button on the steering wheel, we were able to ask the Niro to change the radio station and to set the navigation back to our hotel. 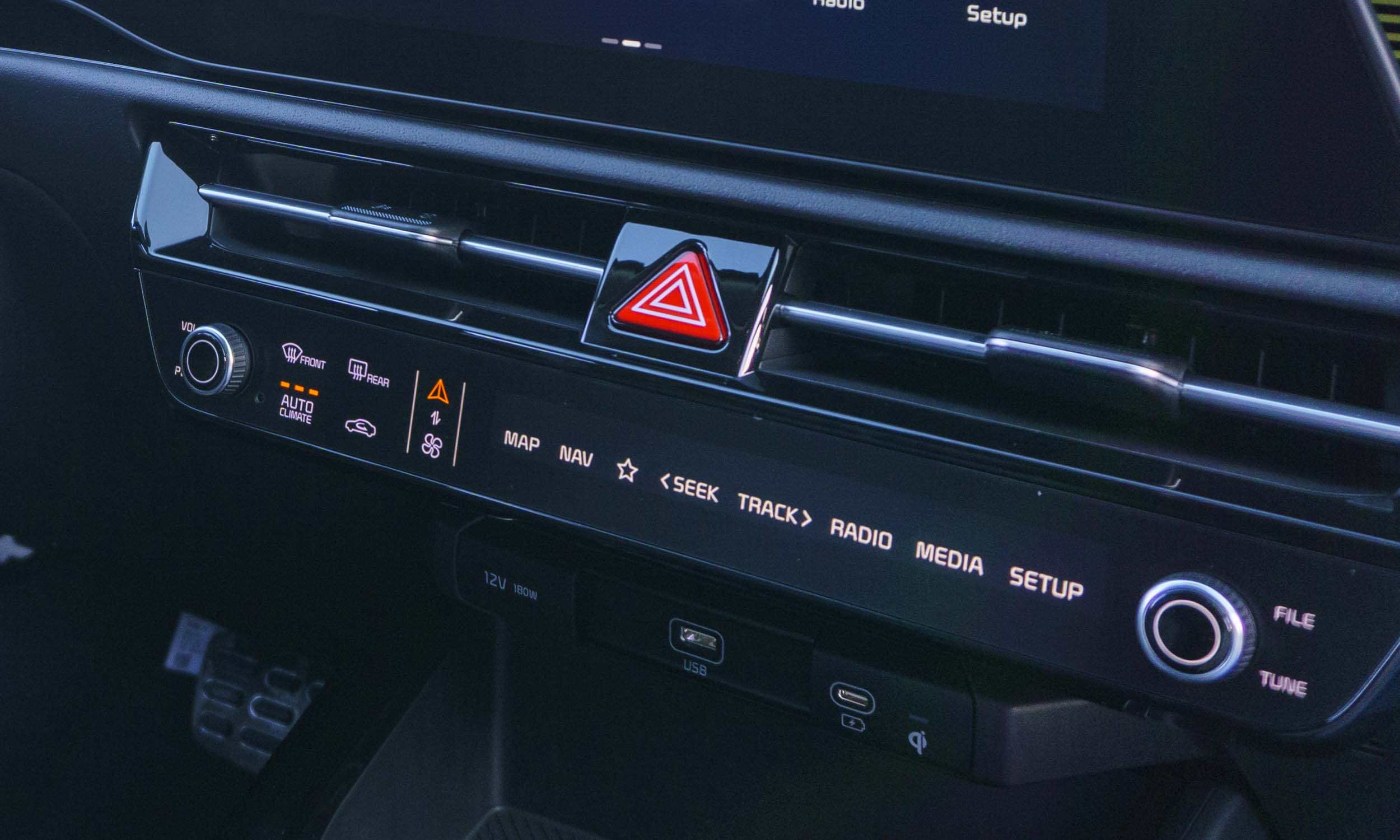 Changing Controls
Kia took a unique — albeit complicated — approach to climate control in the updated Niro. Initially the system displays controls for climate (fan, temperature, airflow direction) with soft-touch buttons and control knobs. All well and good, but with the press of a button the menu changes focus to navigation, radio, and media functions. The knob functions also change, with one set of functions for the climate menu and another for the nav and media. As a result, we inadvertently made the cabin cooler when the goal was to turn down the media volume. 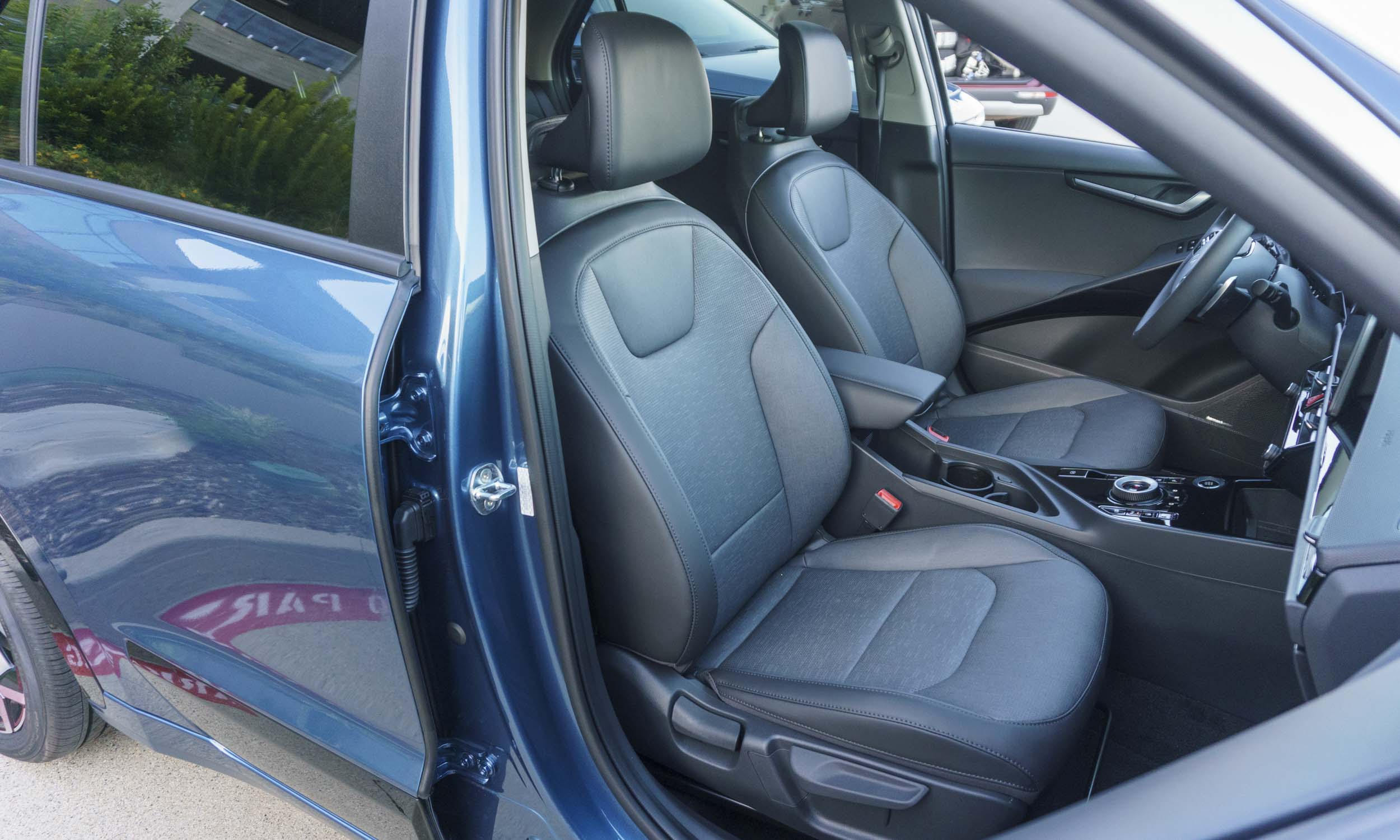 Front Seats
From the side, the front seats look rather odd – the seatbacks lean rearward but the headrests extend forward like an alien creature. Despite their contorted looks, the seats are comfortable with plenty of support — even after a full day behind the wheel, we felt no fatigue or soreness. 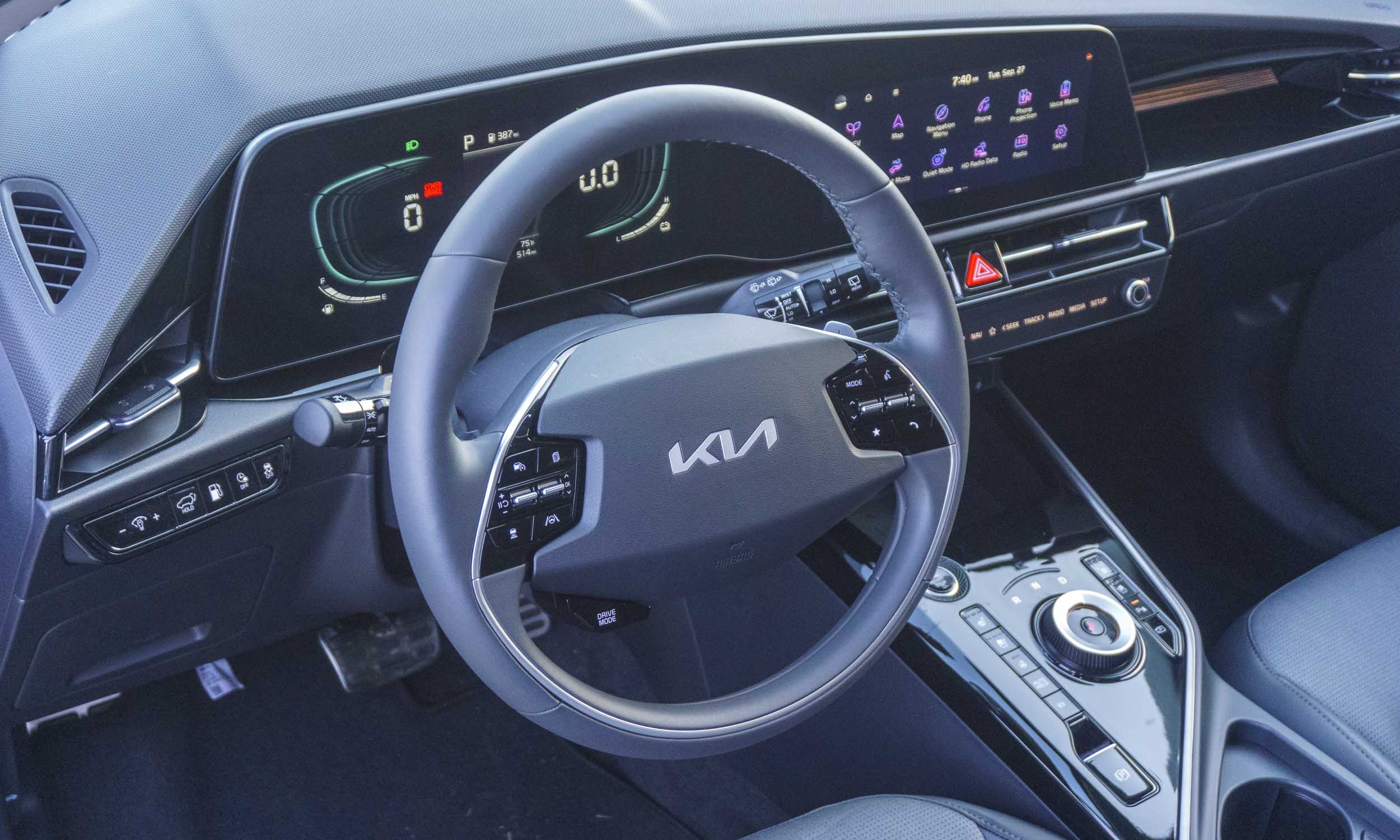 Sustainable
In addition to reducing emissions and fossil fuel use, the Niro’s environmental focus carries through to the interior. Cabin materials are constructed from animal-free textiles, including vegan-based leather trim and a headliner made of recycled wallpaper. The seatbacks are covered in a high-quality combination of bio polyurethane and Tencel sourced from eucalyptus leaves. 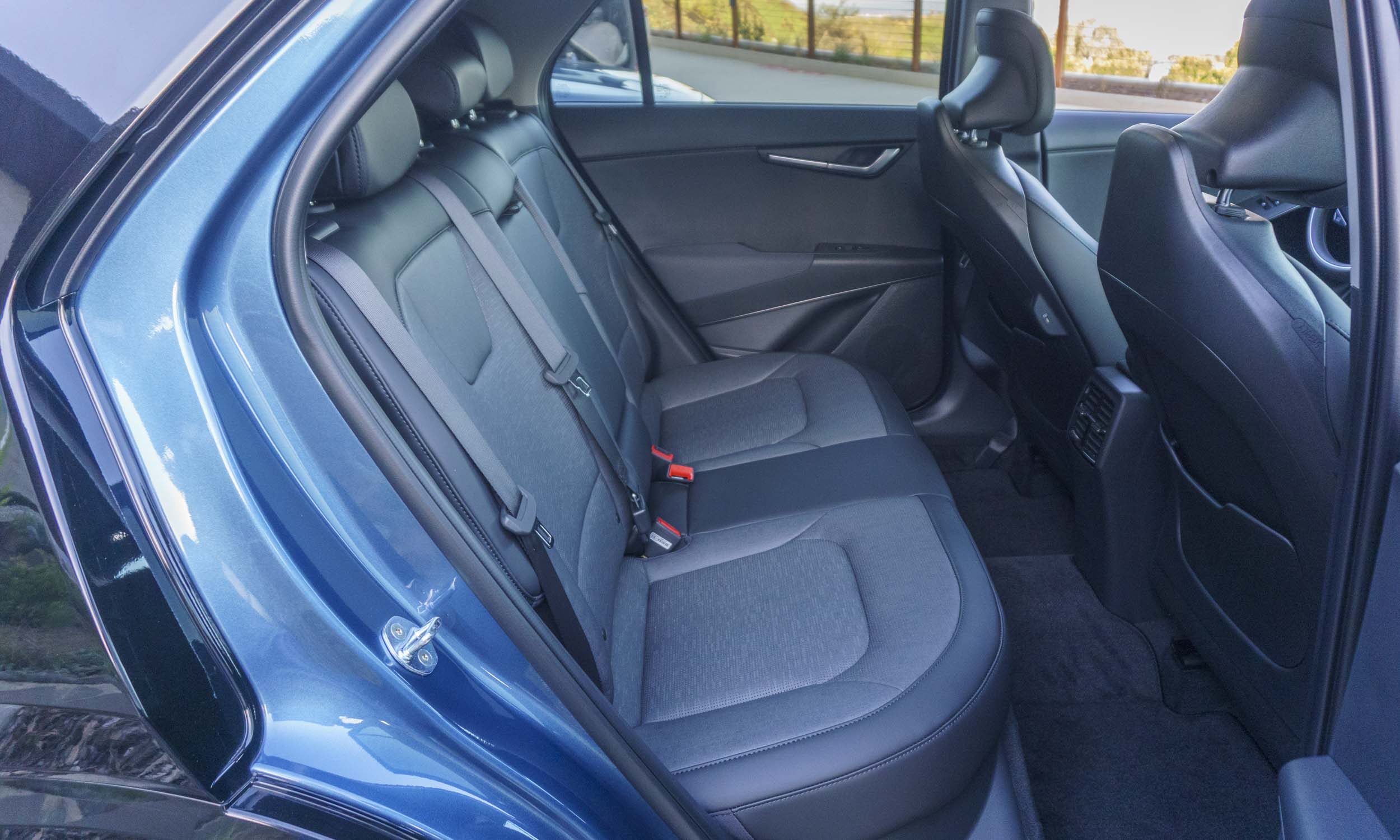 Rear Seat
The 2023 Kia Niro’s increased size is most noticeable in the rear seat, which gains almost 2.5 inches of extra legroom. The seats are comfortable without feeling cramped, although the middle seat is a bit tight, especially for an adult. The Niro has USB-C ports available in the front seatbacks for easy passenger use. 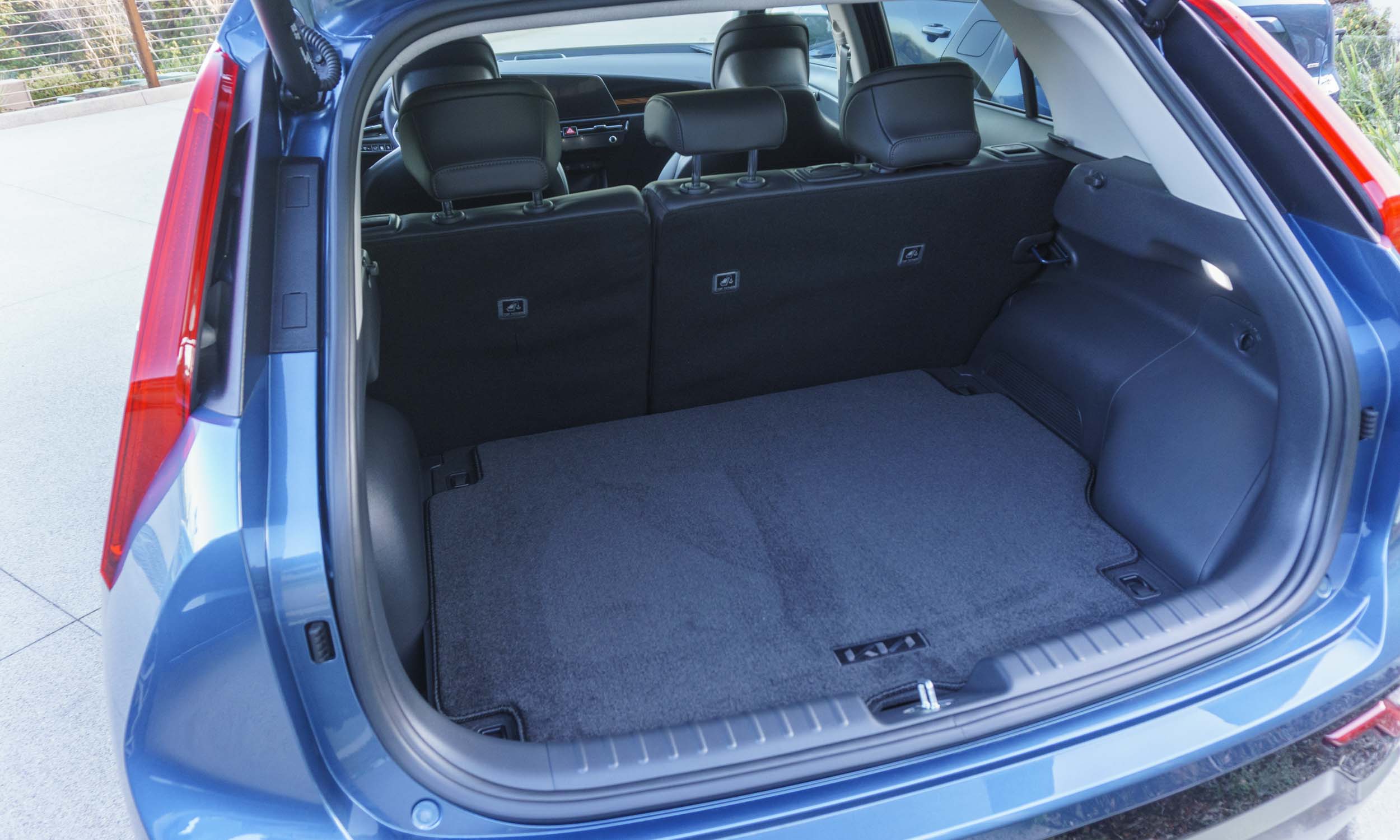 Cargo Space
Not only does the 2023 Kia Niro get more rear-seat real estate, cargo space has also increased by a few cubic feet, providing plenty of room for a few overnight bags or other cargo. Rear seats are split 60/40 so long items can be hauled without sacrificing the entire rear seat, bolstering the Niro’s overall versatility. 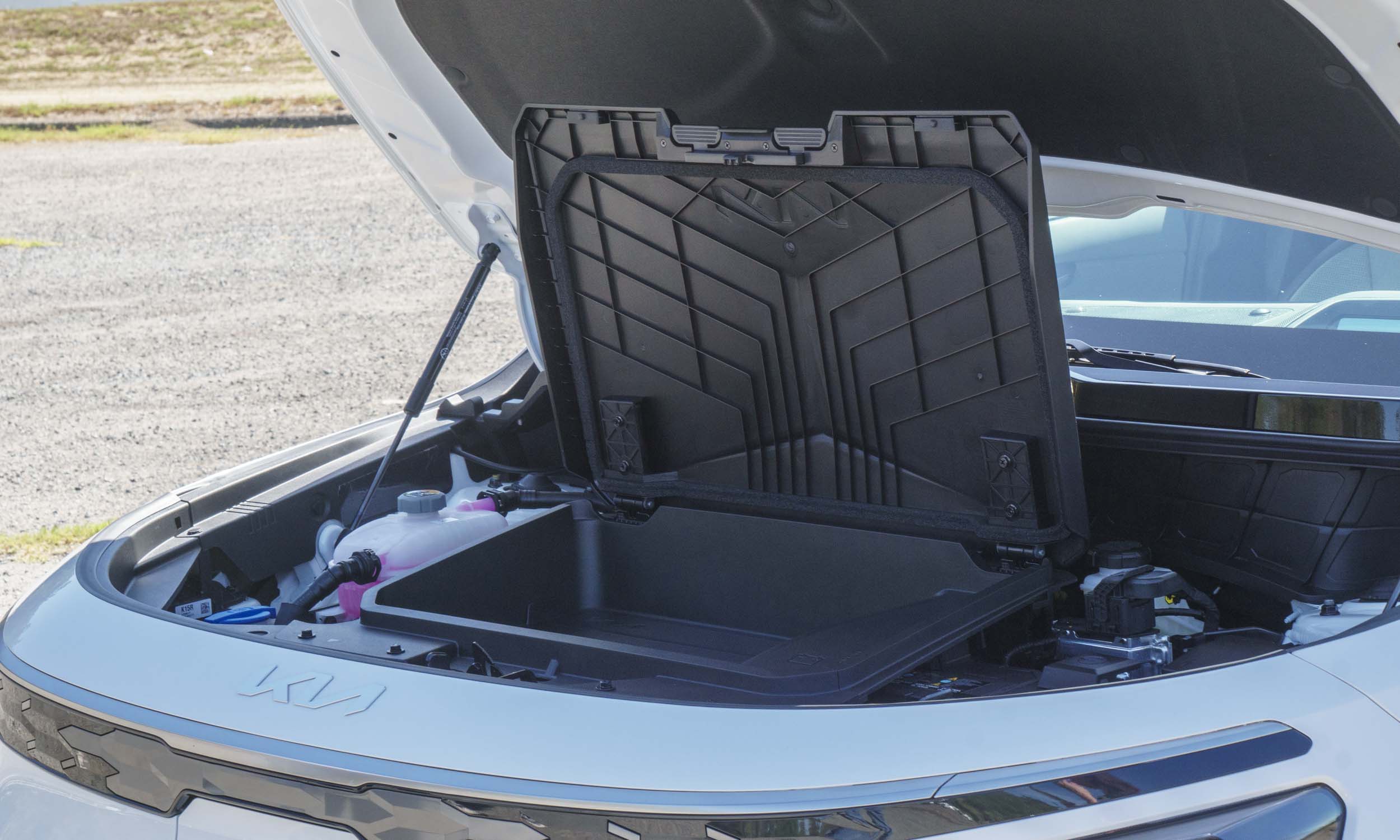 Frunk
With no need to house an internal combustion engine under the hood, many electric vehicles offer storage in its place. This front trunk (or “frunk”) in the Niro is not large, although it does function as a covered space to securely store small items. 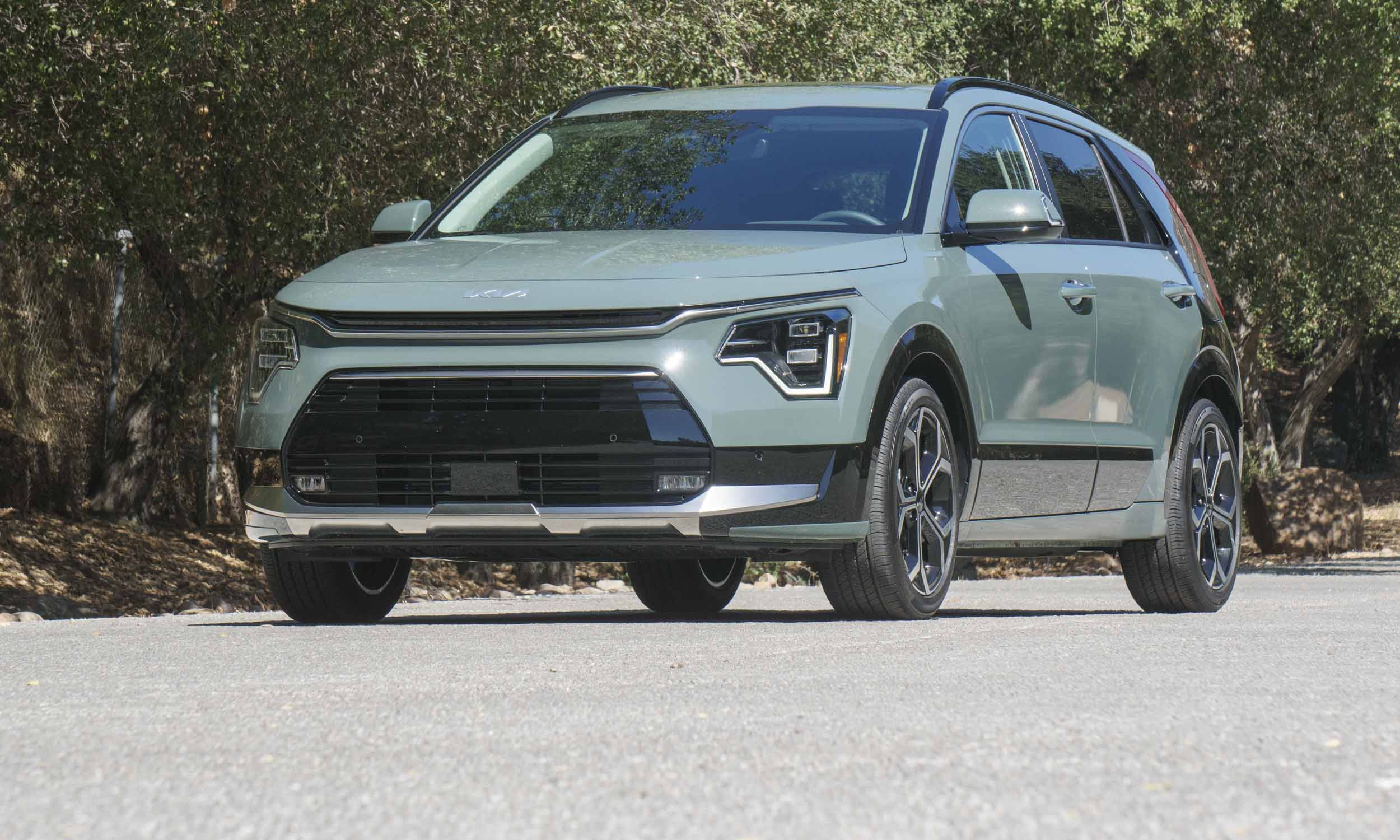 Hybrid
Powering the 2023 Kia Niro Hybrid is a 1.6-liter gasoline direct-injection (GDI) 4-cylinder engine teamed with a 32 kW electric motor to produce a total of 139 horsepower and 195 lb-ft of torque. Although possessing the same mechanicals from the previous generation, the Niro Hybrid receives improvements to increase efficiency. Power gets sent to the front wheels via a 6-speed dual-clutch transmission. The hybrid will reach 60 mph in about 10.4 seconds, according to Kia. What it lacks in power it makes up for in fuel economy. U.S. EPA fuel-economy ratings for the 2023 Kia Niro HEV come in at 53 mpg city / 54 mpg hwy / 53 mpg combined with a total range of 588 miles. These figures drop to 53 / 45 / 49 respectively for the EX Touring and SX Touring versions, which are equipped with larger wheels. 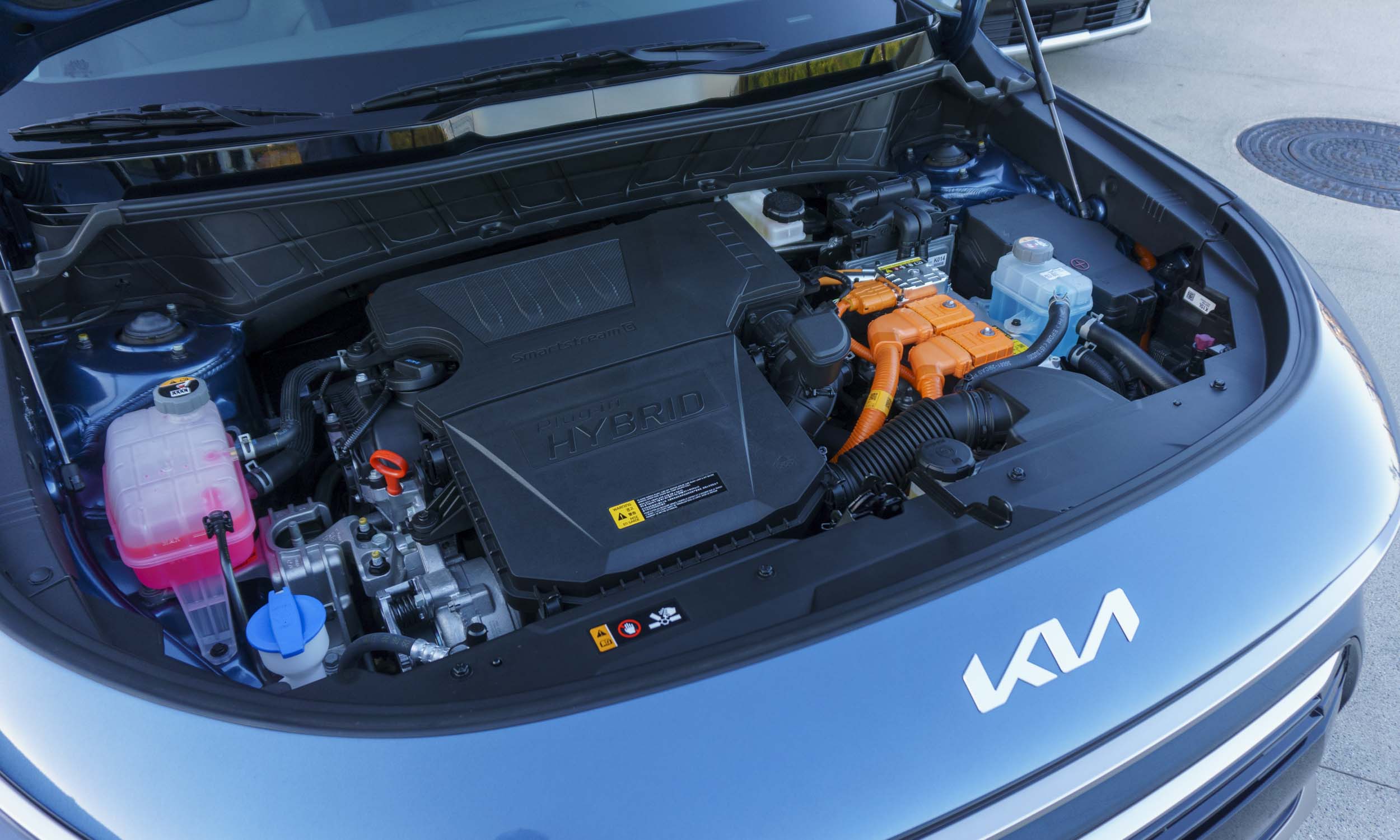 Plug-in Hybrid
The plug-in hybrid version of the Niro uses the same 1.6-liter engine but with a more powerful 62-kW electric motor, so the Niro PHEV has a total output of 180 horsepower. Also utilizing a 6-speed dual-clutch transmission, the Niro PHEV is about one second quicker to 60 mph and can travel up to 33 miles on electric power alone. Returning the PHEV to a full charge on a Level 2 charger takes less than three hours. According to the EPA, this plug-in hybrid achieves 108 MPGe. Both EV range and fuel economy have improved over the previous version. 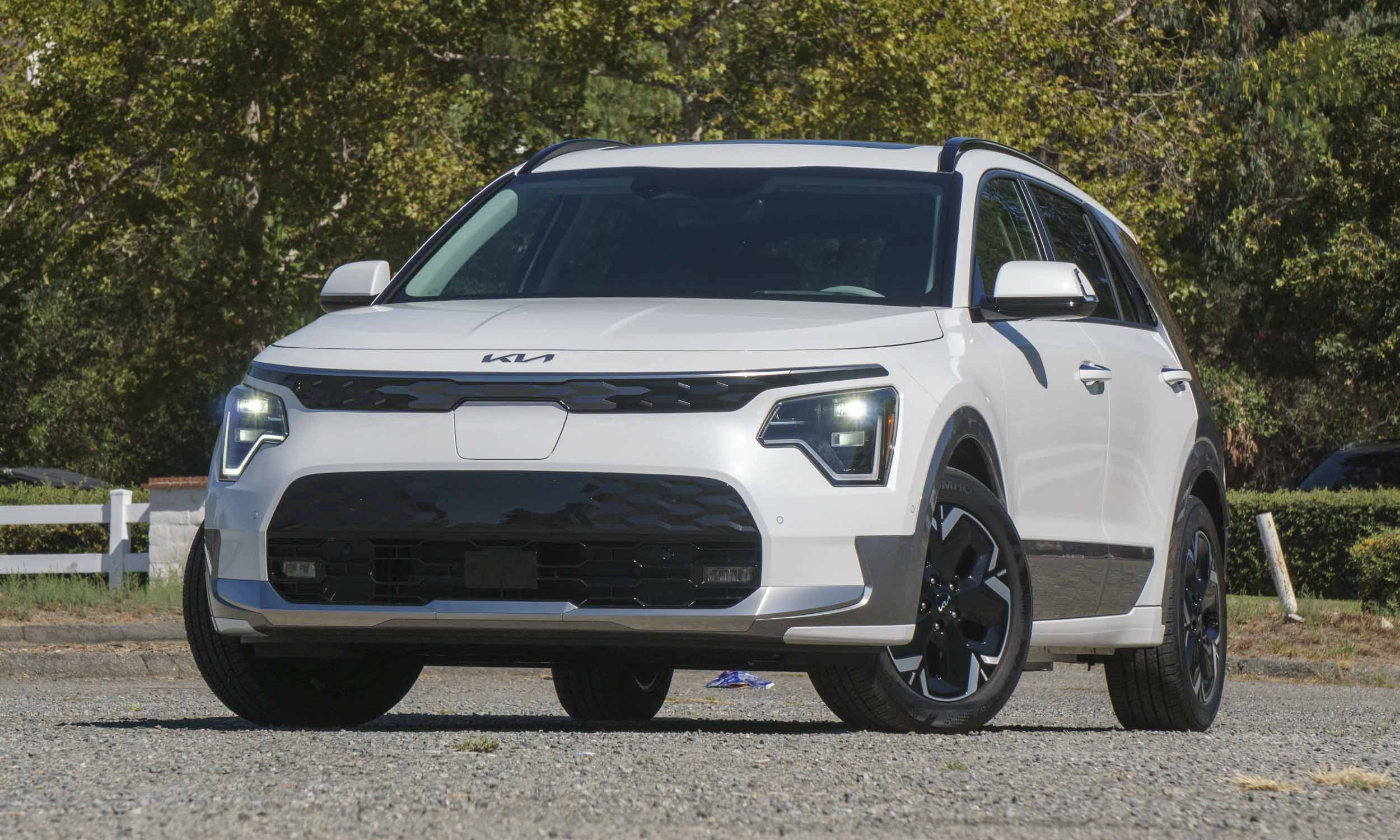 Electric
The Niro EV is the most powerful of the trio, getting 201 horsepower from its permanent magnet synchronous motor. The quickest of the three, the Niro EV has an estimated range of 253 miles on a charge with a rating of 113 MPGe. When plugged into a DC fast charger, the Niro EV can go from 10 to 80 percent charge in about 45 minutes, with a maximum charging capability of 85 kW — respectable, but not the fastest on the market. A Level 2 charger will fully charge the Niro EV in about seven hours, easily getting a full charge overnight. Kia also offers the Niro EV with a heat pump and a battery warmer so range is not diminished in colder weather. 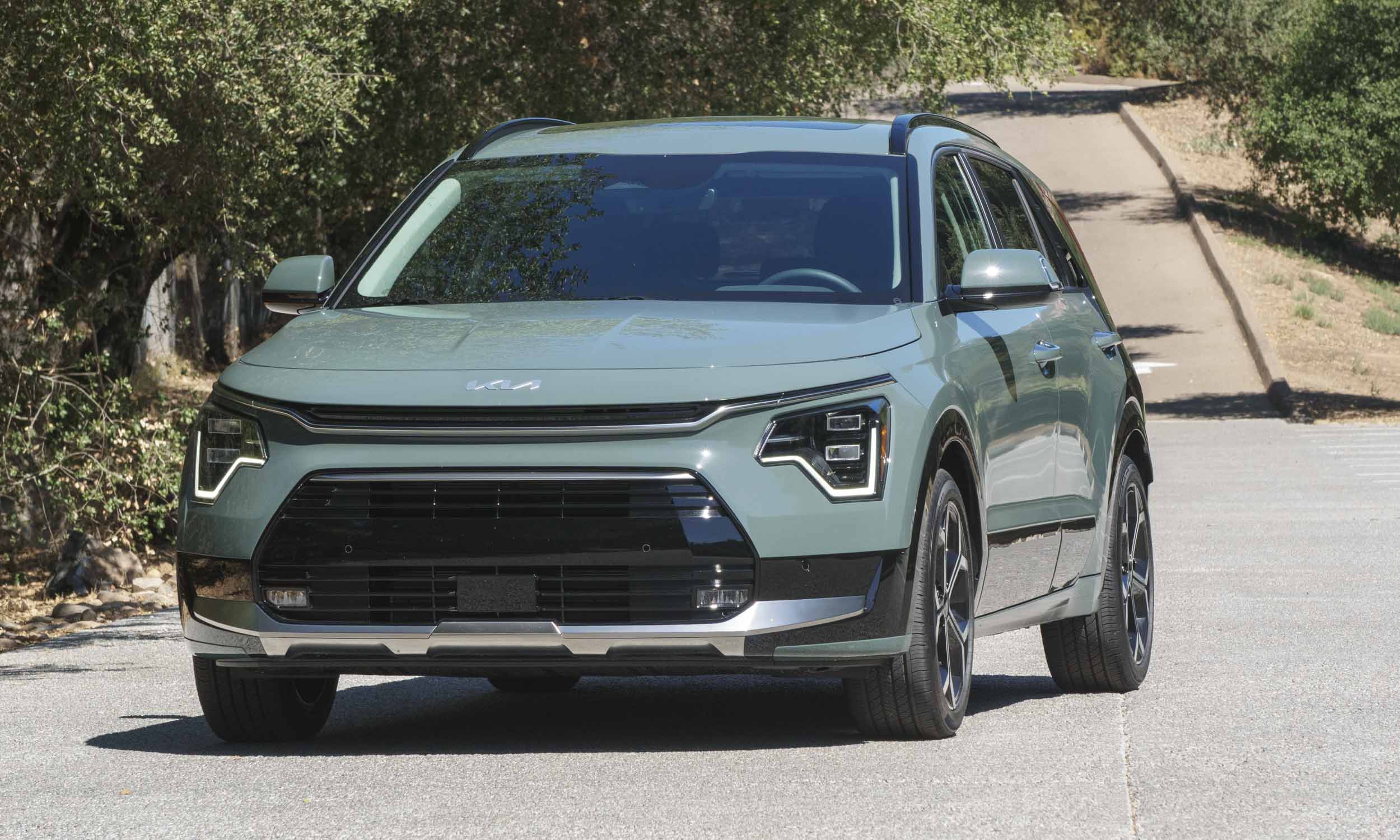 Driving the Hybrid
Kia invited us to Encinitas, California, to experience the 2023 Niro firsthand. We started our drive with the Niro HEV, which will likely be the most popular version in the Niro lineup. With the lowest power output of the three variants, the Niro Hybrid feels slow off the line. The engine gets noisy at high revs and takes some time to achieve highways speed. That said, in most situations where strong acceleration isn’t necessary the hybrid is more than adequate for everyday use. 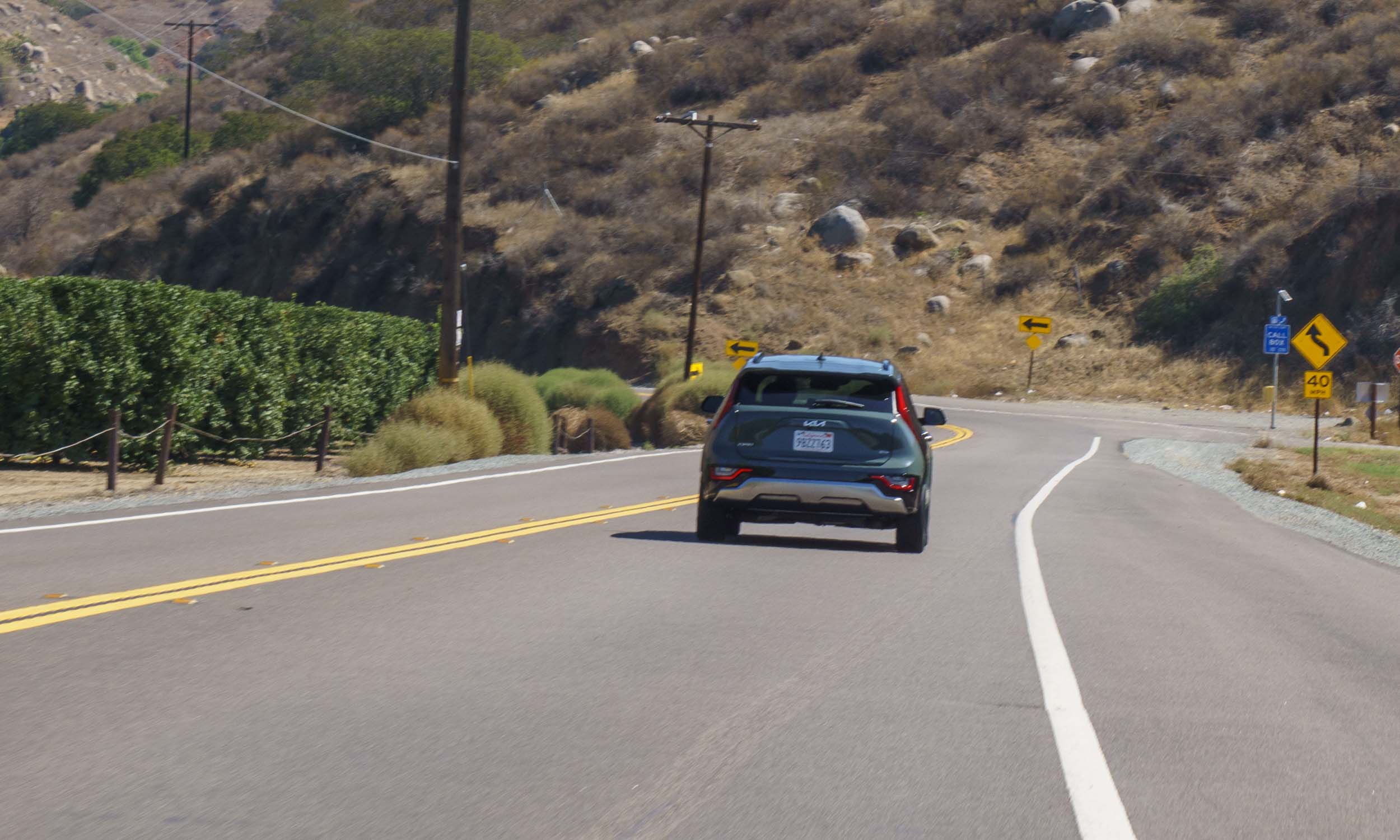 Seamless Operation
The Niro’s 6-speed dual-clutch transmission is certainly more satisfying to drive than a typical CVT. The hybrid system works seamlessly and can even shut down the internal combustion engine at speeds up to 75 mph if the load doesn’t require it. At steady speeds when the engine isn’t being taxed, the swap between ICE is almost impossible to detect. What the Niro HEV lacks in power it makes up in fuel economy. During our 60-mile drive we averaged 54 mpg — not bad for a car that doesn’t need to be plugged in. 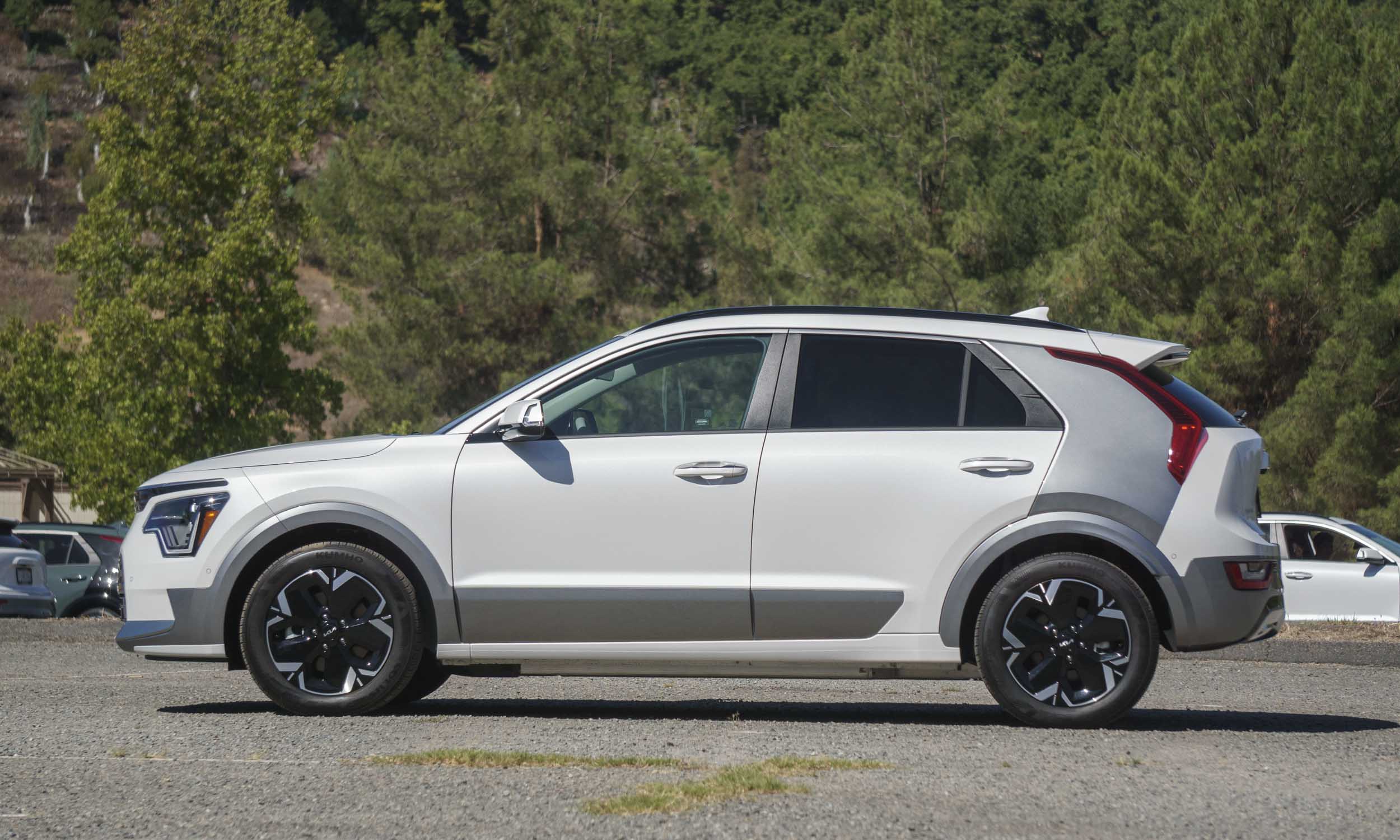 On the Road with the EV
Although most expensive of the Niro triplets, the EV is much more satisfying to drive. With commendable power and instantaneous torque, the Niro EV feels quick and nimble with a smooth, quiet ride. The test vehicle displayed 256 miles of range at a 97 percent charge, which would indicate that the EPA range estimates are possibly conservative. After our exploratory outing, the range dropped by exactly the number of miles driven so the trip computer also appears to be accurate. 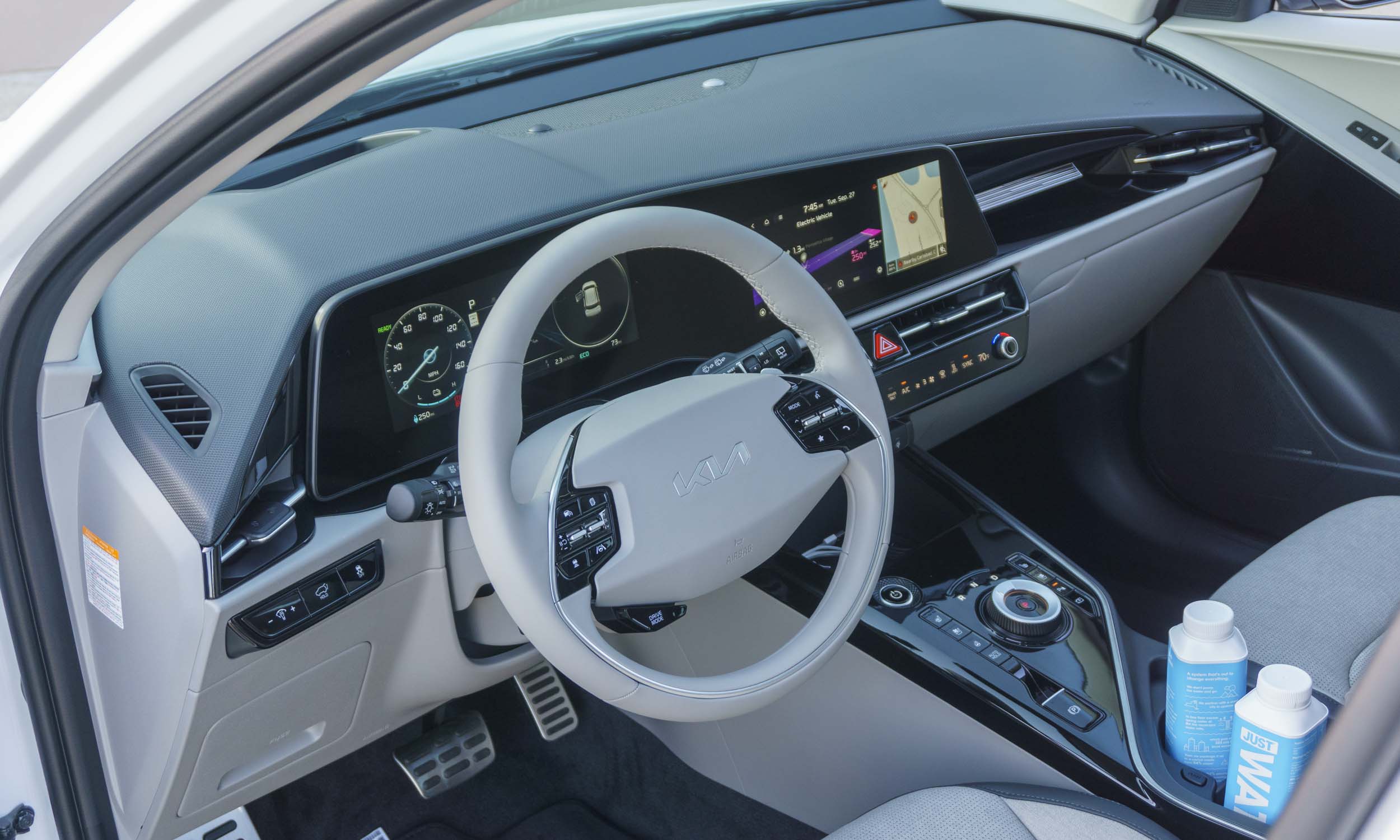 I-pedal
The Niro EV’s driver can adjust the level of regenerative braking via paddles on the steering column. At its lowest setting, the Niro drives like any car, coasting when the driver lifts the throttle. Selecting the maximum regeneration activates “i-pedal,” which allows for one-pedal driving. With i-pedal engaged, when the driver lifts off the throttle the Niro EV slows as if the brakes have been applied, eventually coming to a complete stop. This maximizes the amount of energy reclaimed for charging the battery, and with some practice can become a preferred method of driving. 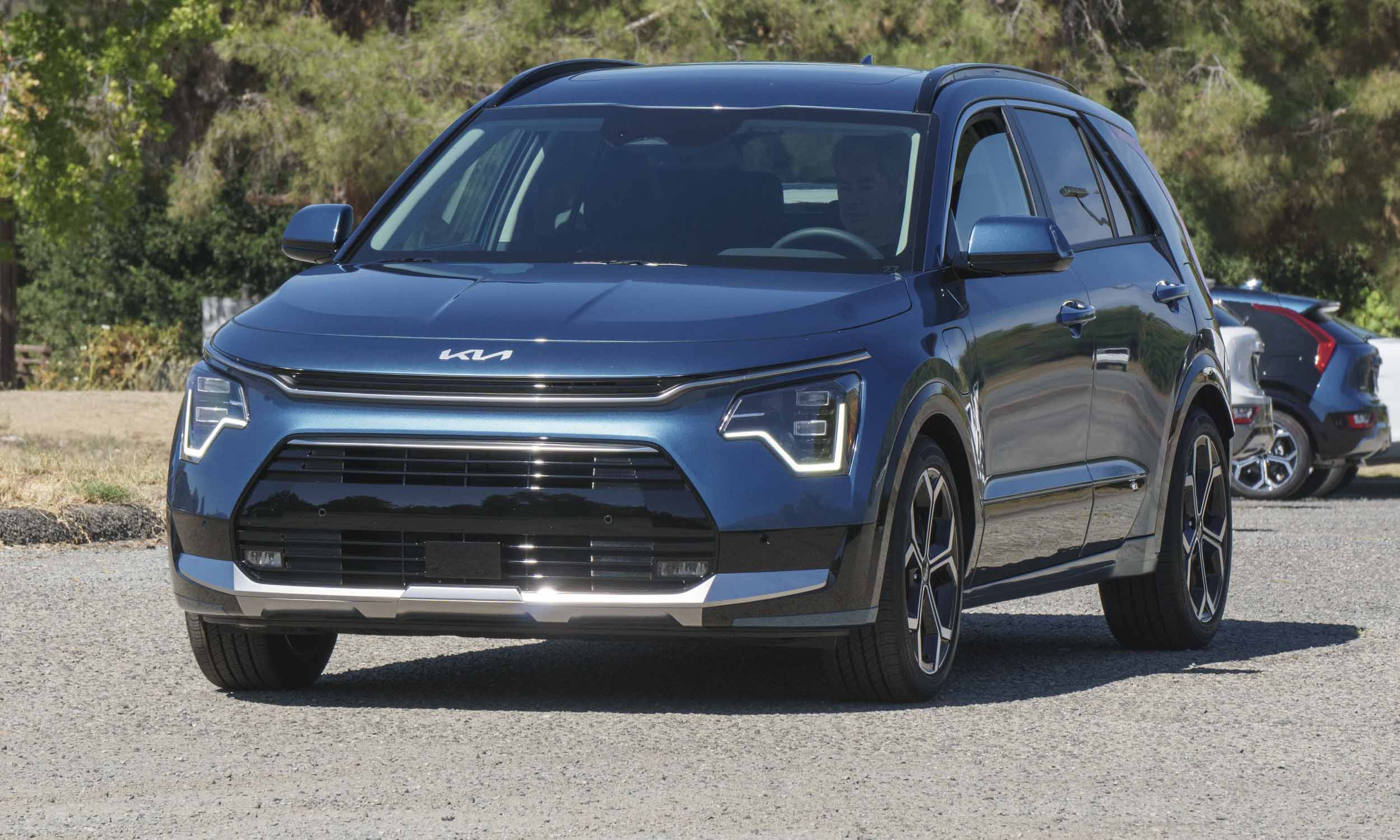 PHEV — the Optimal Compromise
Even though we enjoyed driving the Niro EV the most, the Plug-in Hybrid makes sense. Most drivers will find the 30+ miles of EV range more than enough for a typical daily commute, allowing the car to be used like an electric vehicle. When more range is required, the engine starts just like a hybrid. We appreciate the additional power of the PHEV, which is considerably more satisfying to drive than the HEV. 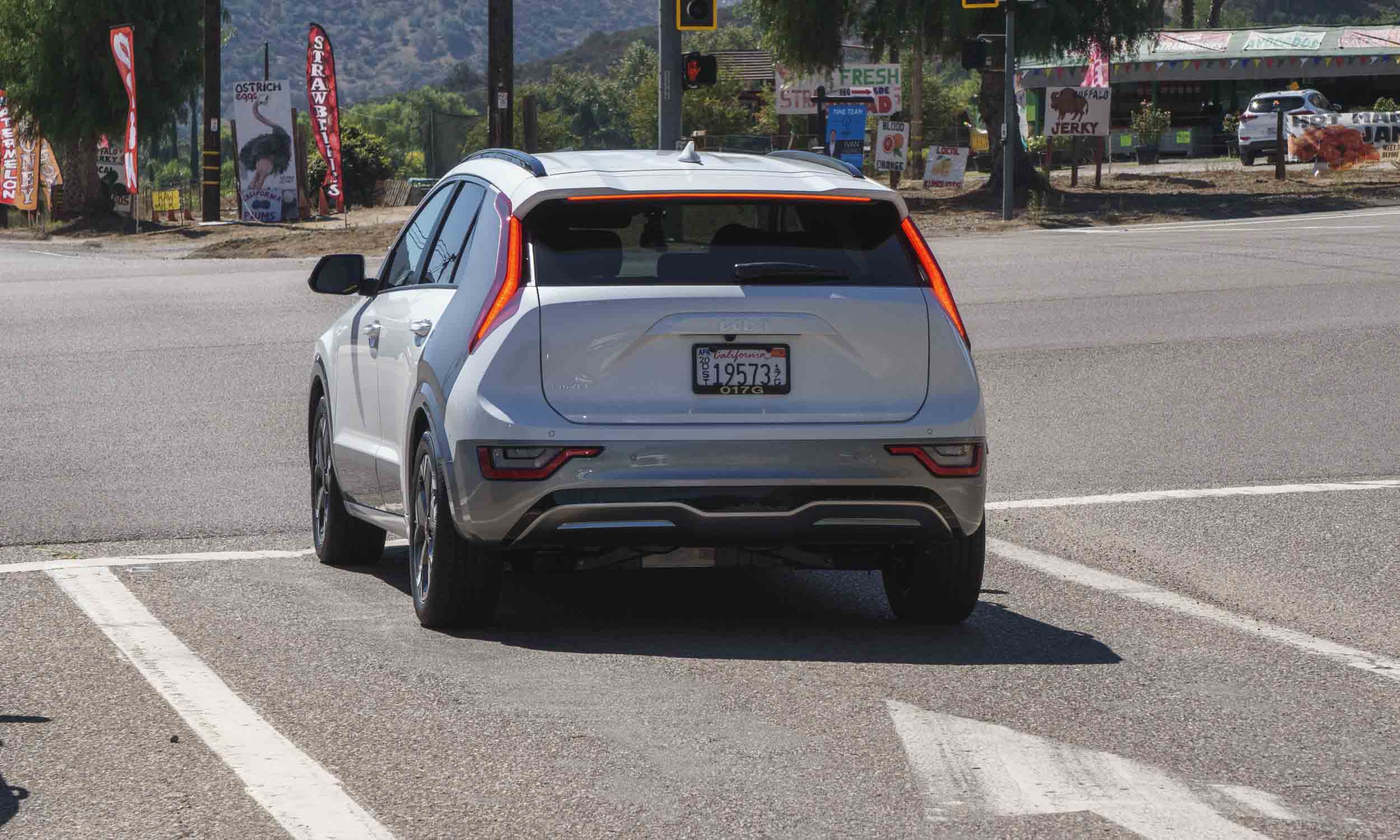 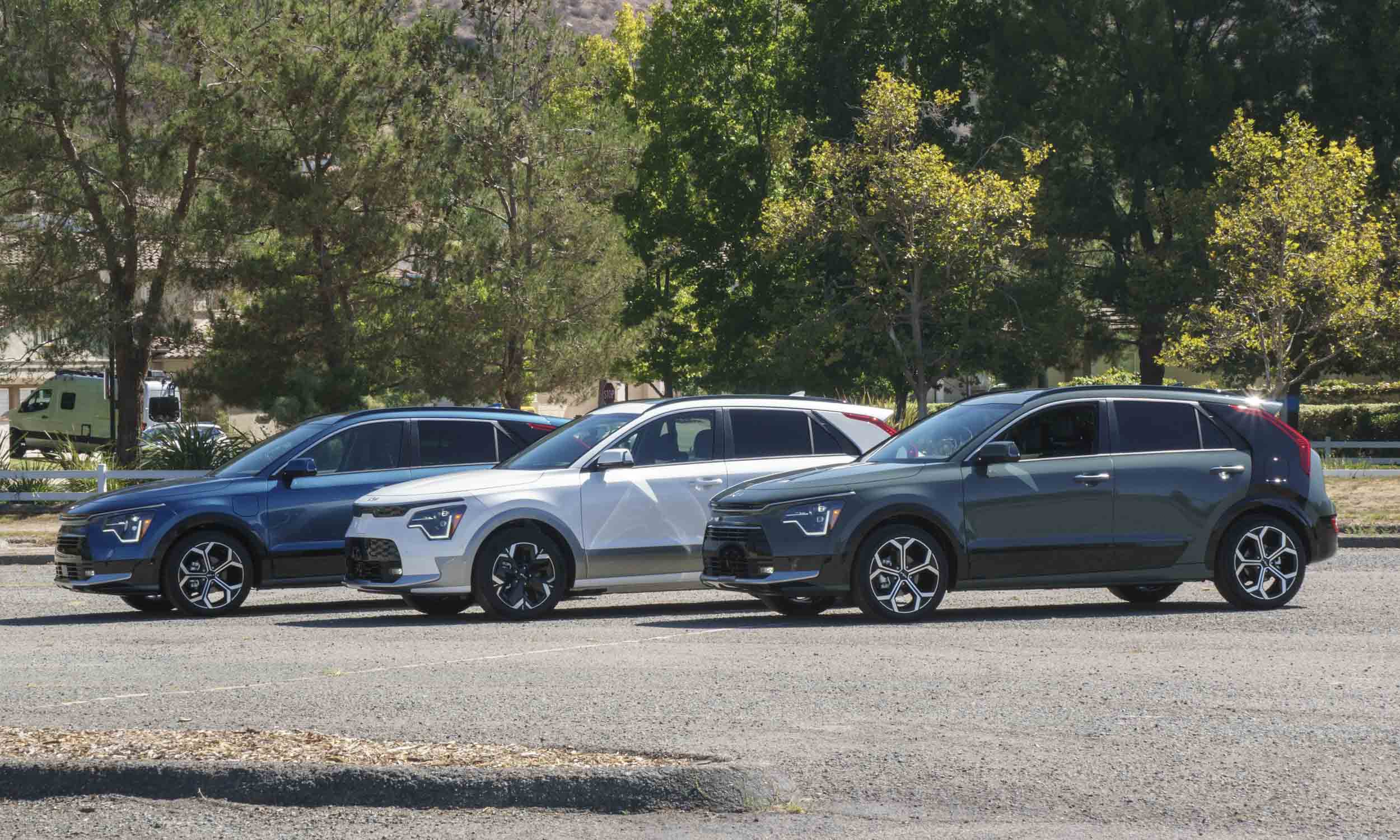 Right for You?
The Kia Niro is already a fuel-efficient option in the crowded crossover market, and the updated 2023 Niro does the job even better. With a stylish new look, more interior room, and a premium vibe inside, the Niro offers all the utility expected of a small crossover. With three different fuel-efficient powertrains to choose from, the Niro remains unique in the marketplace and certainly worthy of consideration. 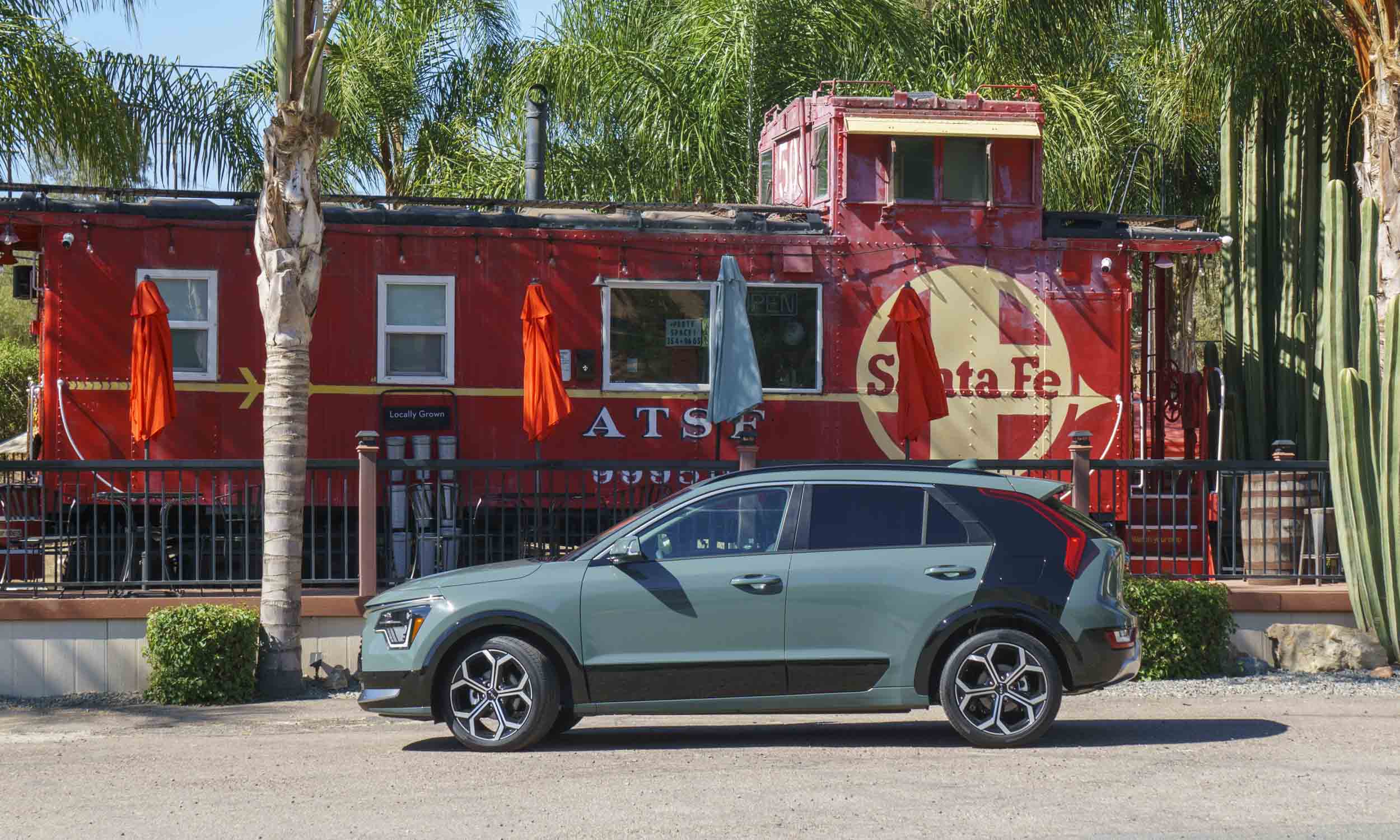 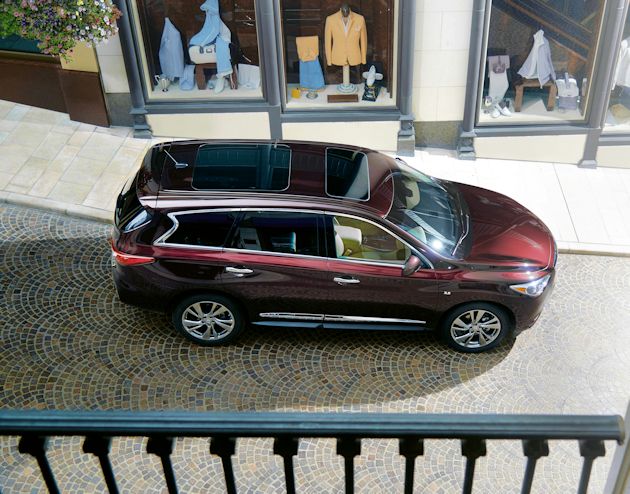 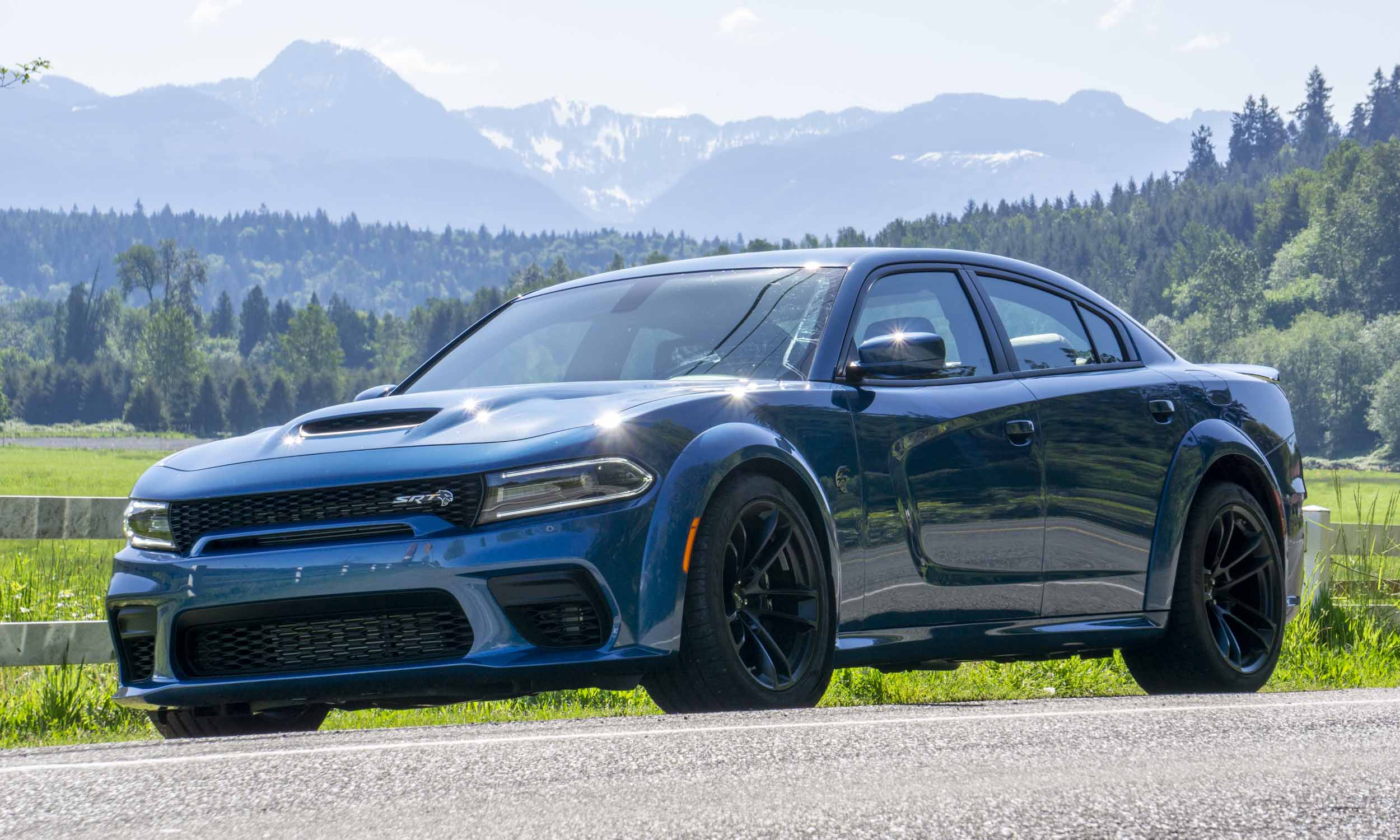