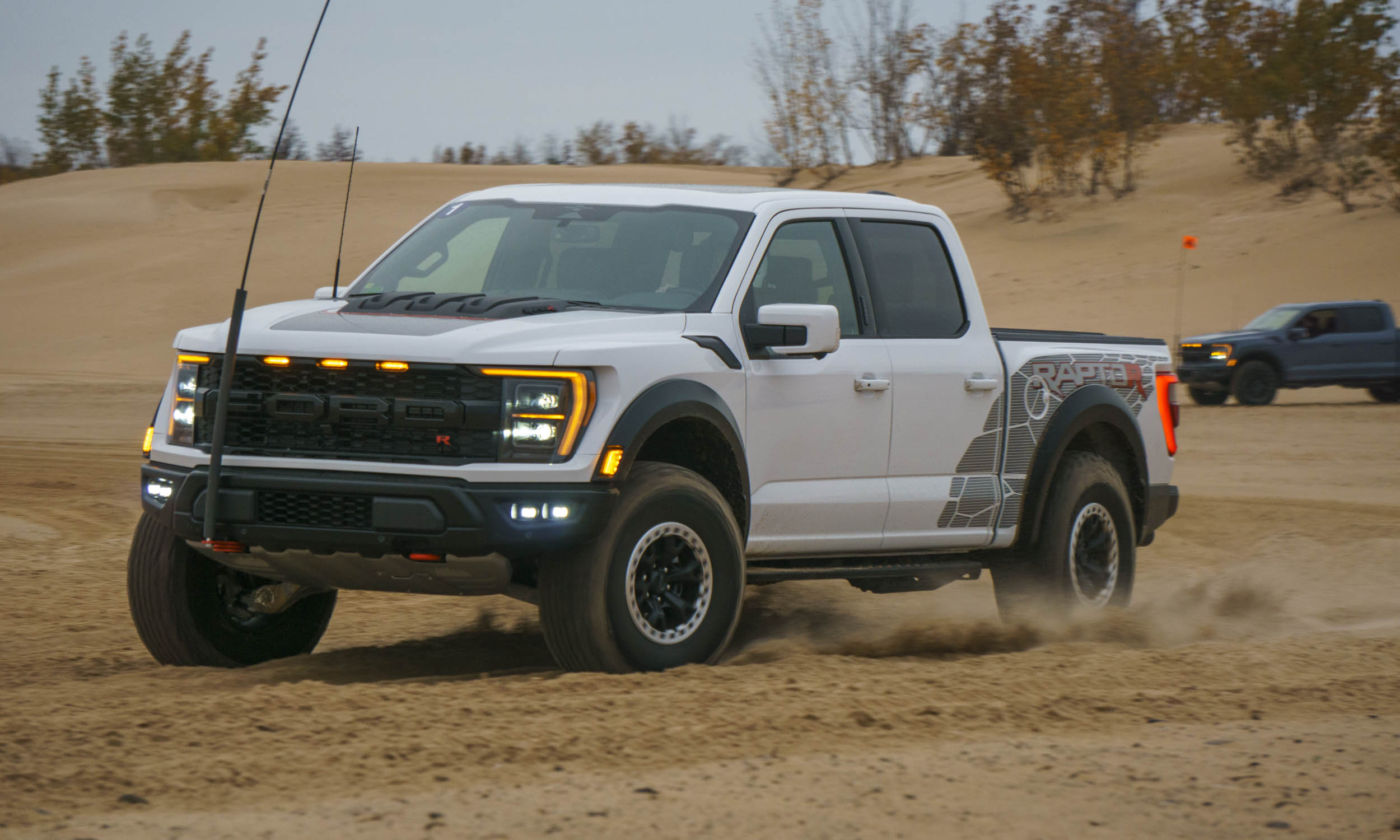 What Is It?
In 2021 Ford introduced the third-generation F-150 Raptor — an off-road ready pickup with bolder styling and more capability than a standard F-150, as well a powerful EcoBoost V6 engine. This new Raptor boasted impressive off-road performance, but immediately truck enthusiasts were a saying it should have had a V8. Now the V8 is here, and it’s powering an even more aggressive 2023 Ford F-150 Raptor R with 700 horsepower. “Raptor R is our ultimate Raptor,” noted Carl Widmann, Ford Performance chief engineer. “When customers experience Raptor R in the desert and beyond, it will make the hairs on the back of their necks stand up — and they’ll love every second of it,” Widmann effused. 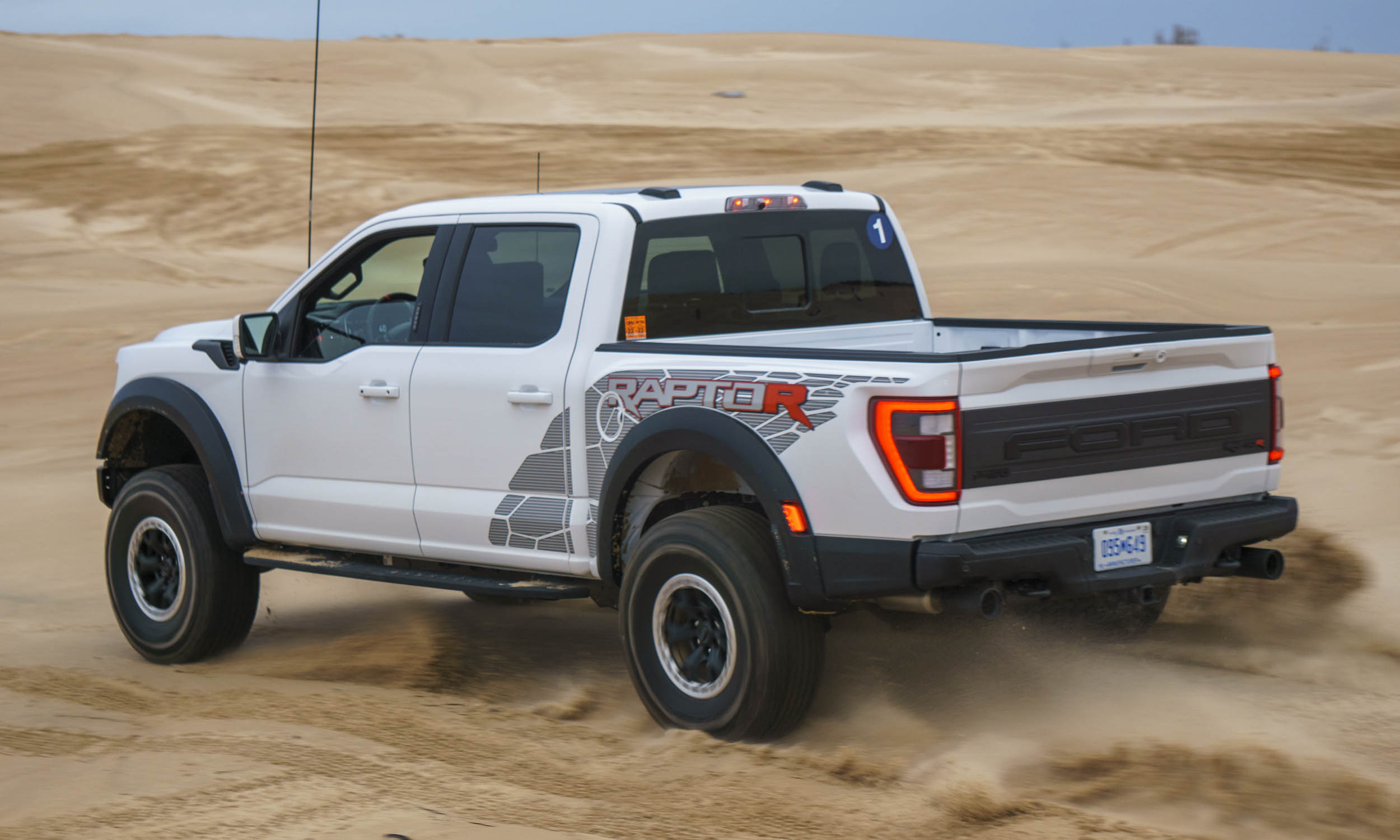 The Competition
When the Raptor premiered 10 years ago, there was no other truck on the market that could offer the same performance and off-road capability right from the factory. That held until last year when Ram introduced the TRX — an extreme-performance off-road pickup boasting more than 700 horsepower. Now Ford claws back with the Raptor R, which not only makes 700 horsepower, it weighs about 450 pounds less. The battle is on, and the consumer gets to choose which truck wins. 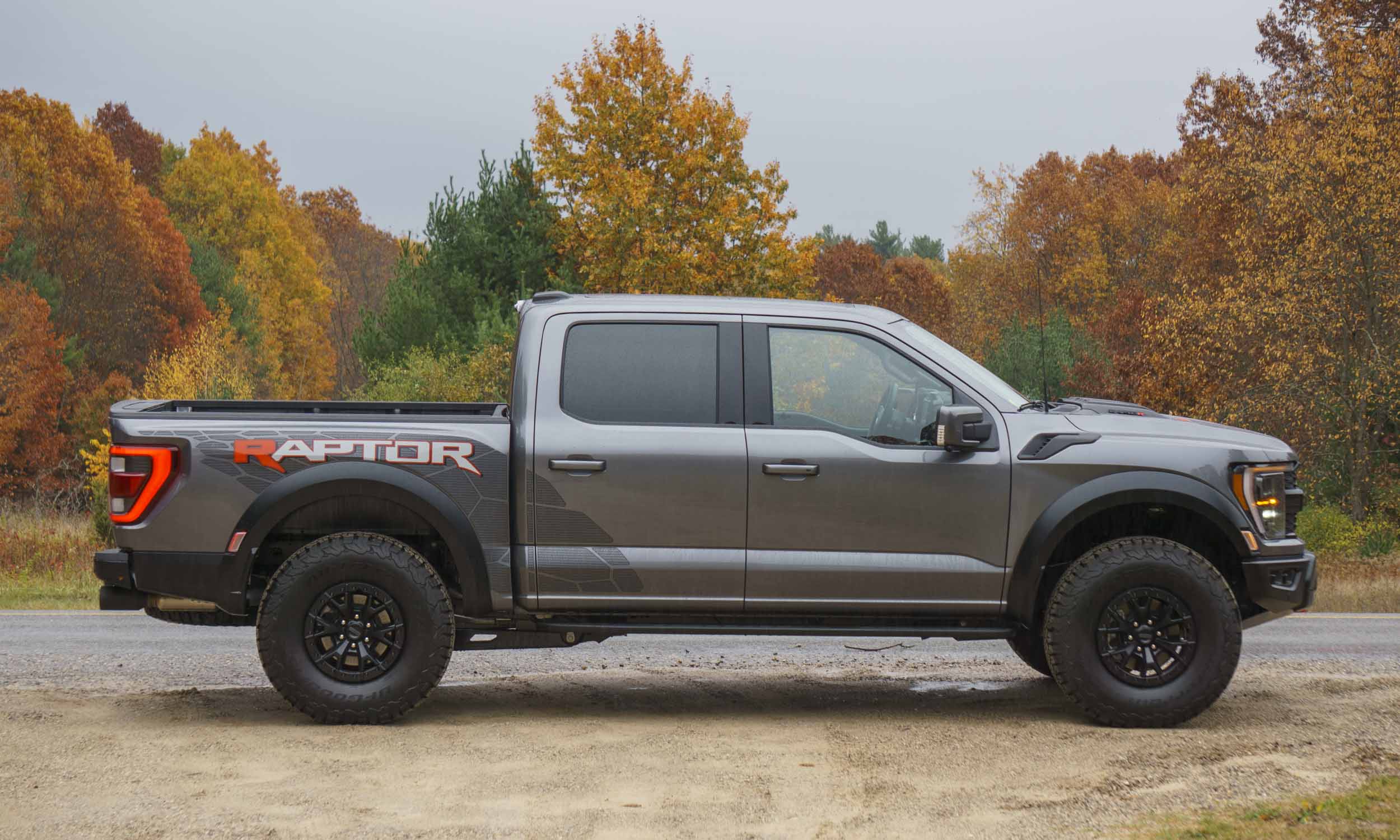 Standing Out
The 2023 Ford F-150 Raptor R has subtle yet noticeable exterior changes beyond the standard Raptor. All exterior accents are black, and the hood gets a larger vent that sits about one inch higher than found on the EcoBoost, adorned with the RAPTOR name, with the final letter R in Code Orange. The R badge can also be seen in the revised grille, and tow hooks are also in Code Orange. The available exterior graphics package is similar to the standard Raptor except that the last R in Raptor. There is one stylistic irritation: the orange R is the first letter on the right side and the last letter on the left side — we get the symmetry, but we find it annoying. 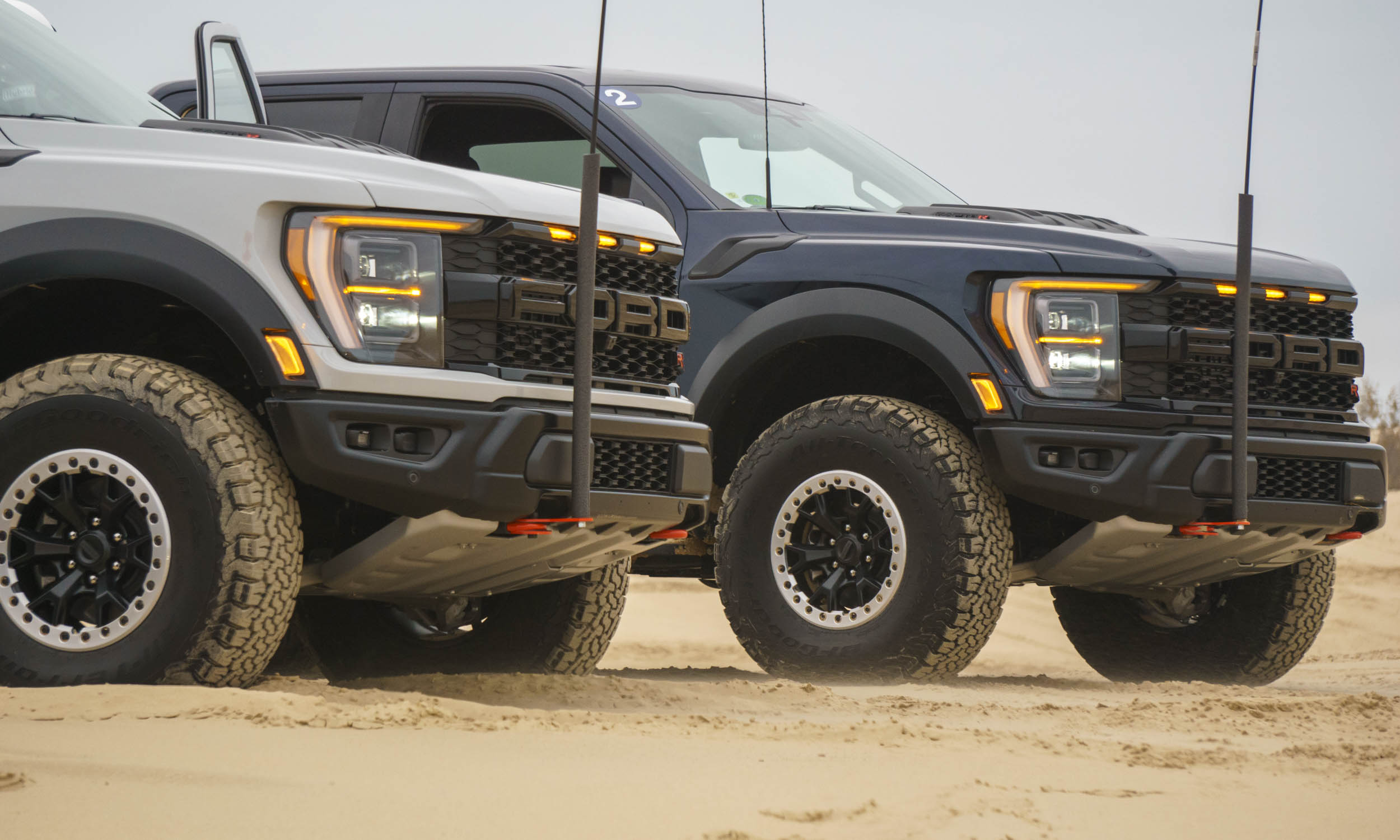 Model Lineup
The 2023 Ford F-150 Raptor R resides at the top of the Ford F-150 lineup at a hefty starting price of $107,350 — a full $30,395 more than the EcoBoost-powered Raptor. In addition to the V8 powertrain and the enhancements under the skin, the R adds the styling updates listed earlier as well as Recaro seats trimmed in leather and Alcantara suede, carbon fiber interior trim, and Code Orange stitching throughout the cabin. Raptor R also includes a 37-inch tire package as standard equipment. 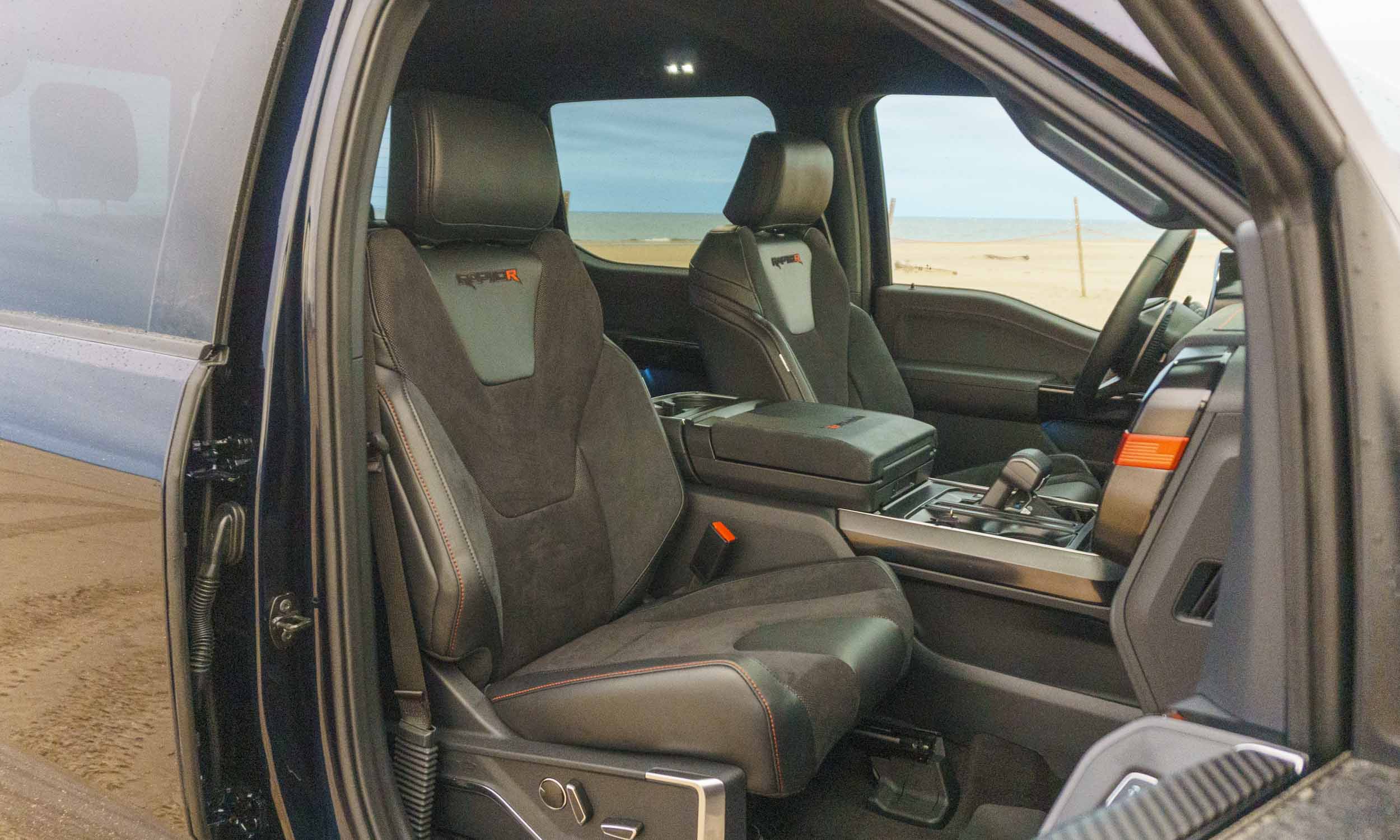 Inner Space
The Raptor R may look like a beast on the outside, but it’s soft on the inside. The standard Recaro sport seats get trimmed in black leather and soft Alcantara suede with contrasting orange stitching and the Raptor R logo embossed on the seatback. Carbon fiber trim on the doors and dashboard add a high-performance look. The seats offer satisfactory support and comfort, even when this massive truck is bombing through sand dunes at speed. The seats also have heating and cooling capability as well as power adjustments. 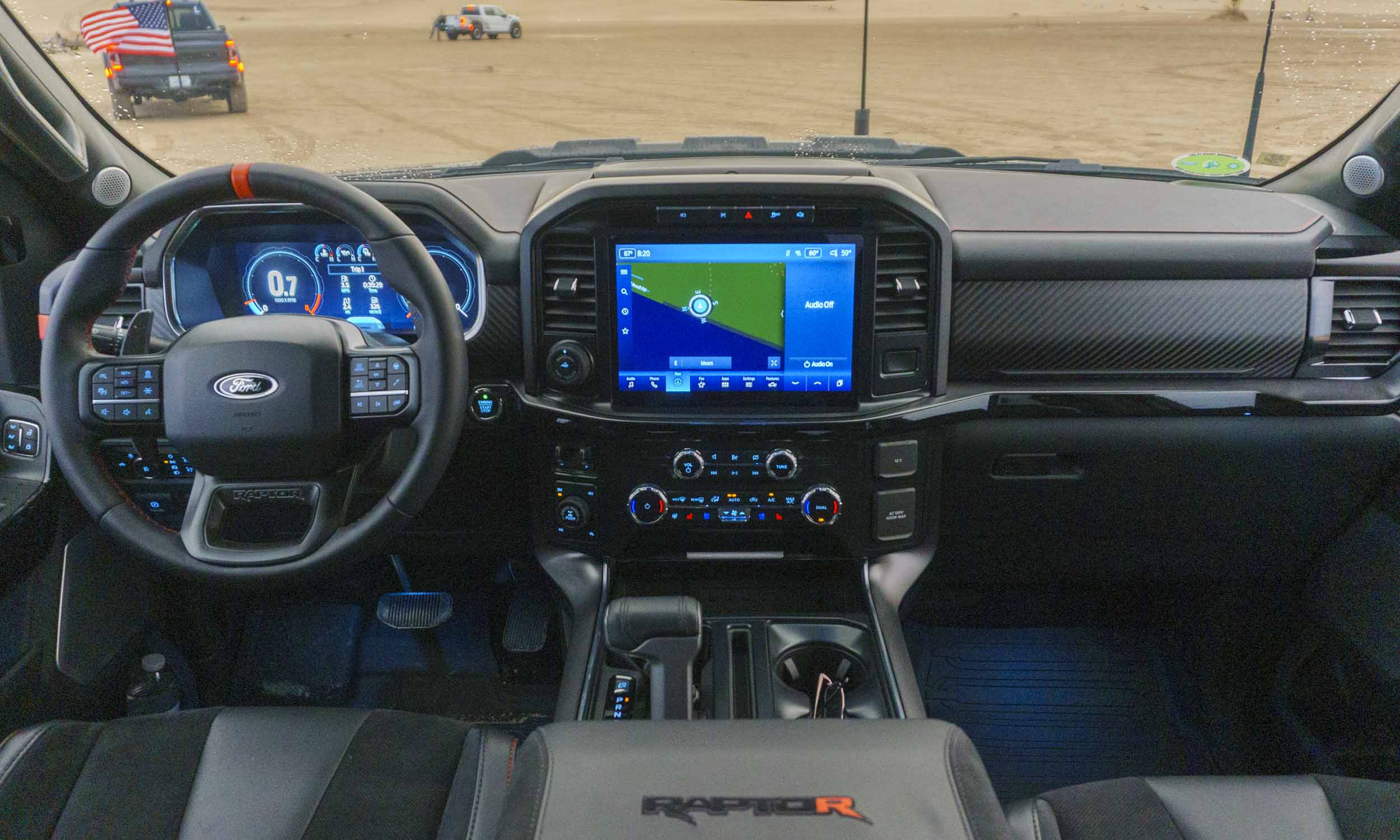 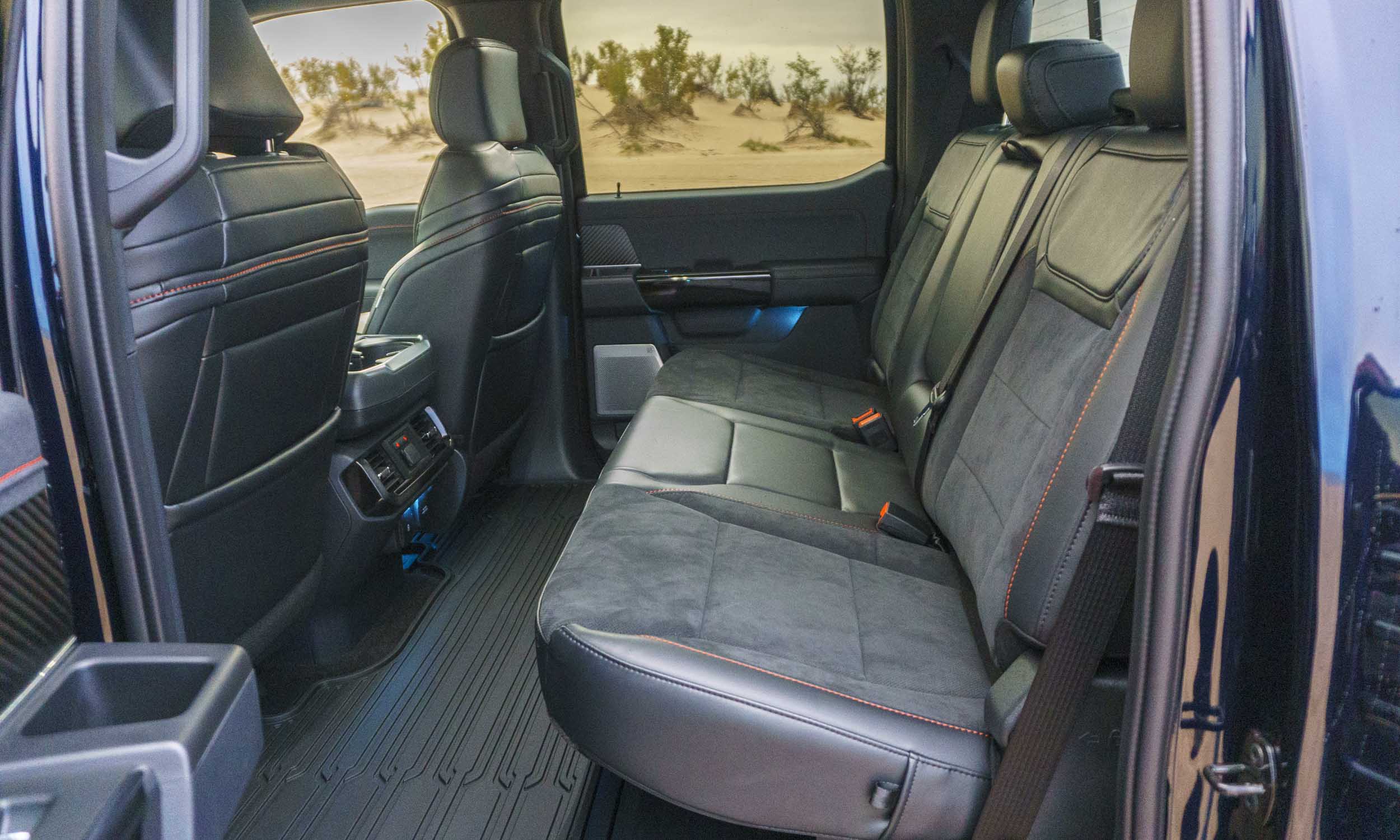 Rear Seat
Like any other F-150, the rear seat of the Raptor R is spacious and comfortable. Trimmed similarly to the front seats, the rear seats are heated and can be folded up to create impressive storage space. 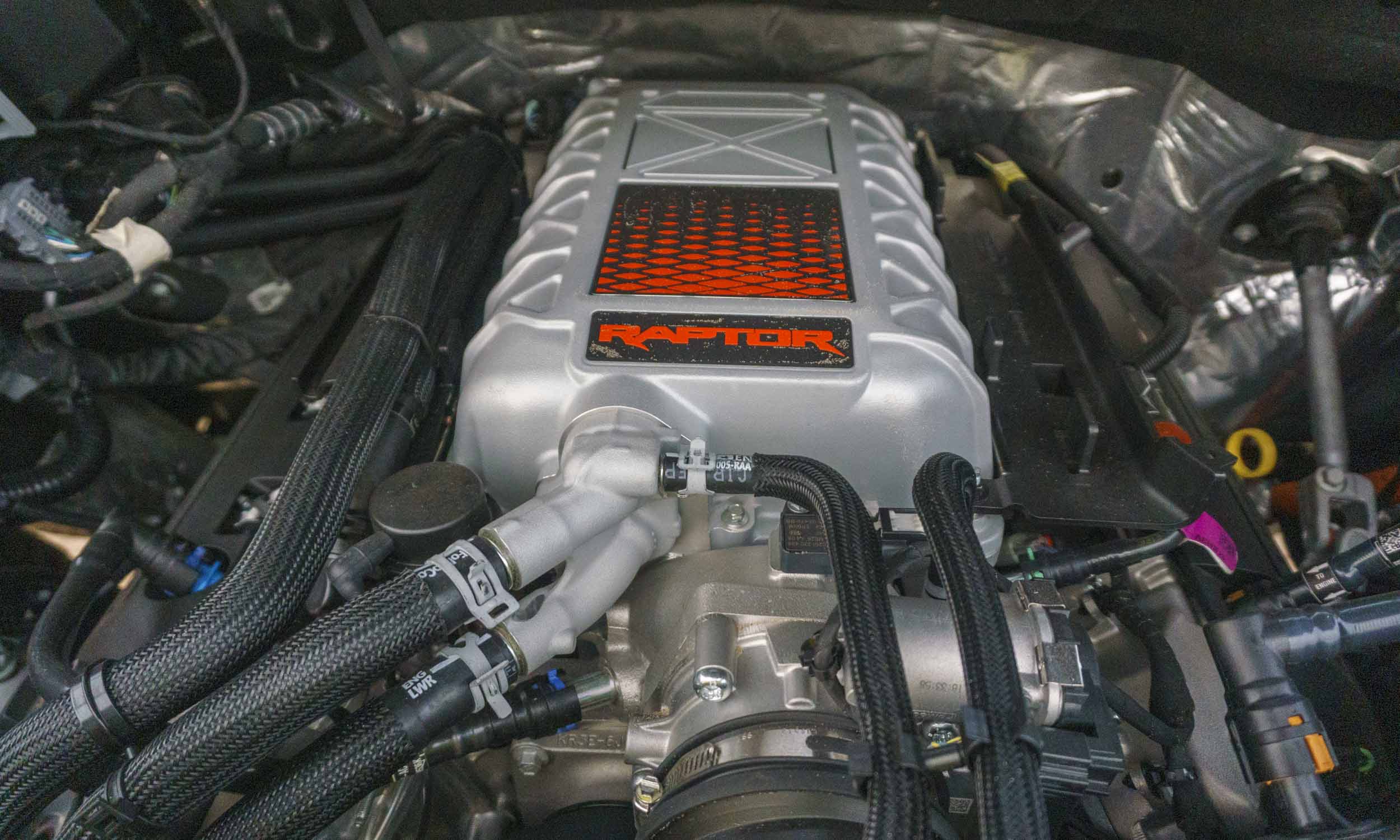 Under the Hood
Powering the 2023 Ford F-150 Raptor R is a 5.2-liter supercharged V8 engine originally used in the Mustang Shelby GT500. The big V8 has been optimized to handle the Raptor’s off-road performance, pumping out 700 horsepower and 640 lb-ft of torque — a full 250 horsepower more than the EcoBoost Raptor. All that power gets delivered via a smooth-shifting 10-speed SelectShift automatic transmission. This additional power increases the Raptor’s towing capability to a maximum of 8,700 pounds. 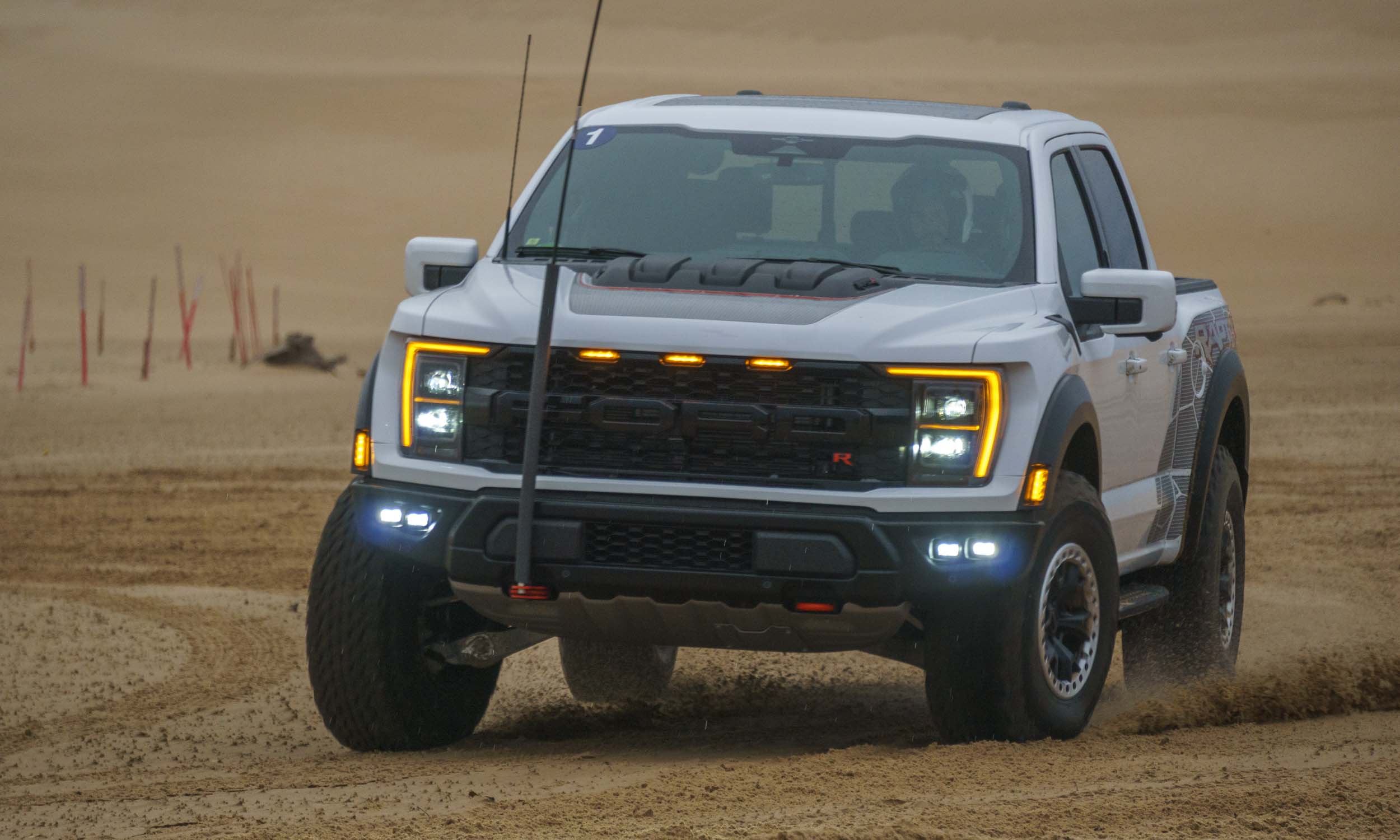 Optimized for Raptor R
Ford Performance recalibrated the V8’s supercharger with a new pulley, which is better suited to the Raptor R’s off-road purview. This increases torque delivery at the low- and mid-range rpm, which gives the truck better performance in most situations. Other upgrades include a stainless steel exhaust manifold as well as a unique oil cooler and filter. The air intake volume of the 2023 Ford F-150 Raptor R has been increased by 66 percent thanks to a wider air inlet and a higher-flow conical air filter. 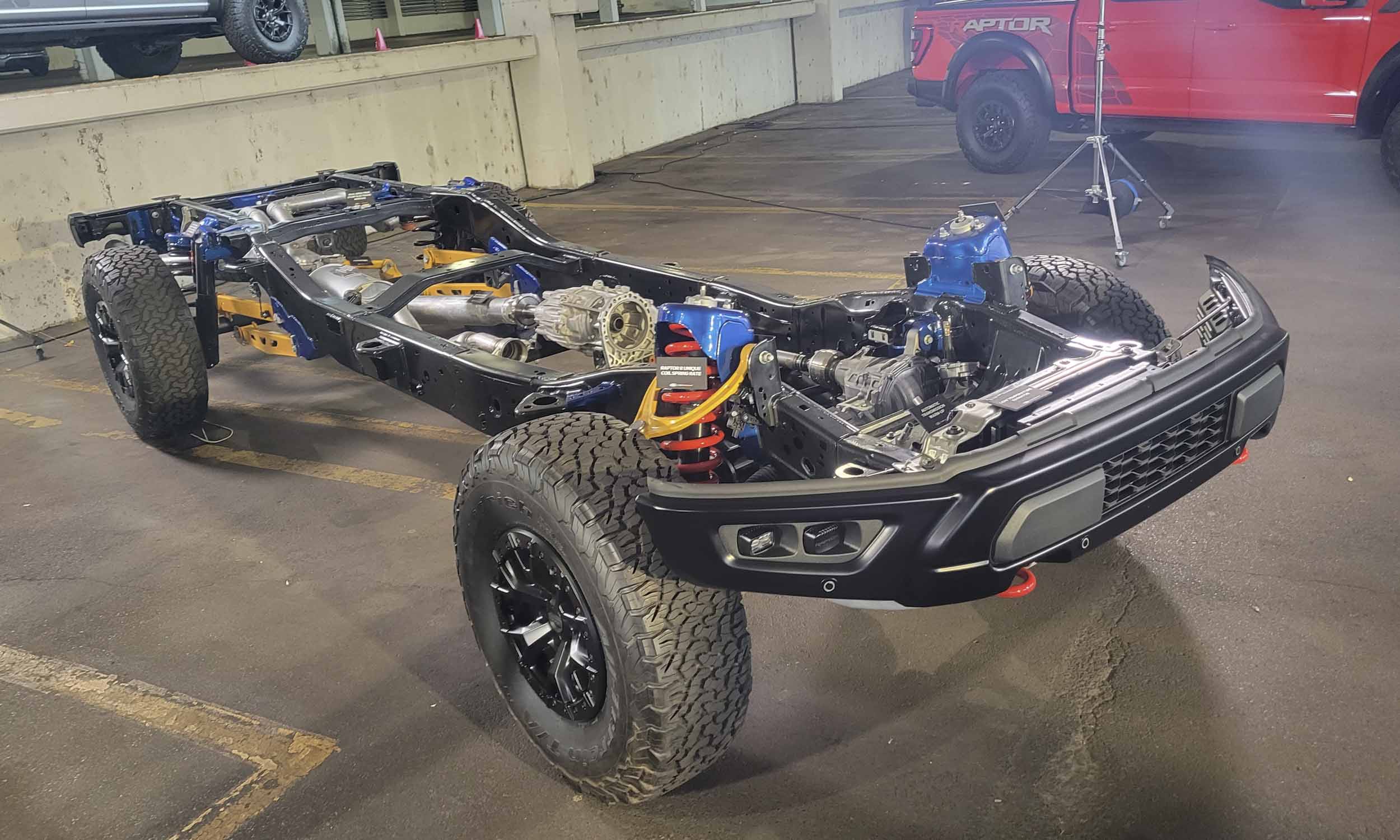 Chassis Upgrades
When Ford developed the latest-generation Raptor, it did so with plans to ultimately add V8 power. As a result, the chassis is almost the same as the one underpinning the EcoBoost version. That said, a few changes were required to handle the engine’s additional power. To increase the Raptor R’s capabilities, engineers added a new front axle with a higher-strength carrier casting and aluminum-ribbed structural cover to better manage the additional engine torque. The 2023 Ford F-150 Raptor R also features a unique larger-diameter aluminum driveshaft as well as a new specially tuned torque converter. 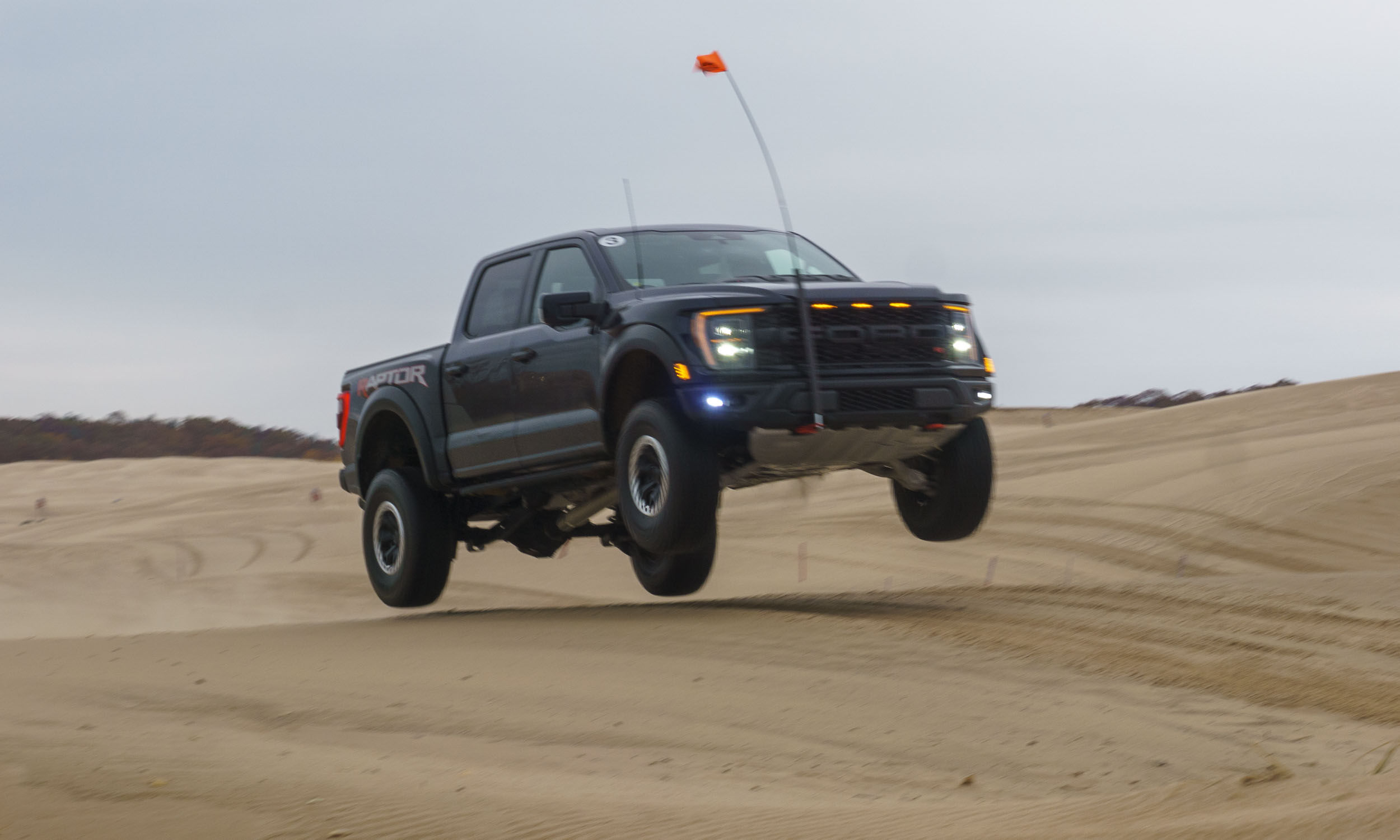 Off-Road Suspension
Like the standard EcoBoost Raptor, the R features a 5-link rear suspension with extra-long trailing arms to better maintain axle position on rough terrain. A Panhard rod and 24-inch coil springs are all optimized for excellent stability while traversing desert terrain at high speeds. The Raptor R also gets advanced FOX Live Valve shocks designed to provide the best balance of ride quality and roll control both off-road and on. Electronically controlled dampers use suspension height sensors to monitor terrain conditions independently, with the ability to adjust the suspension hundreds of times per second. Wheel travel of 13 inches up front and 14.1 inches in back gives the Raptor R plenty of ability to traverse large objects in its path. 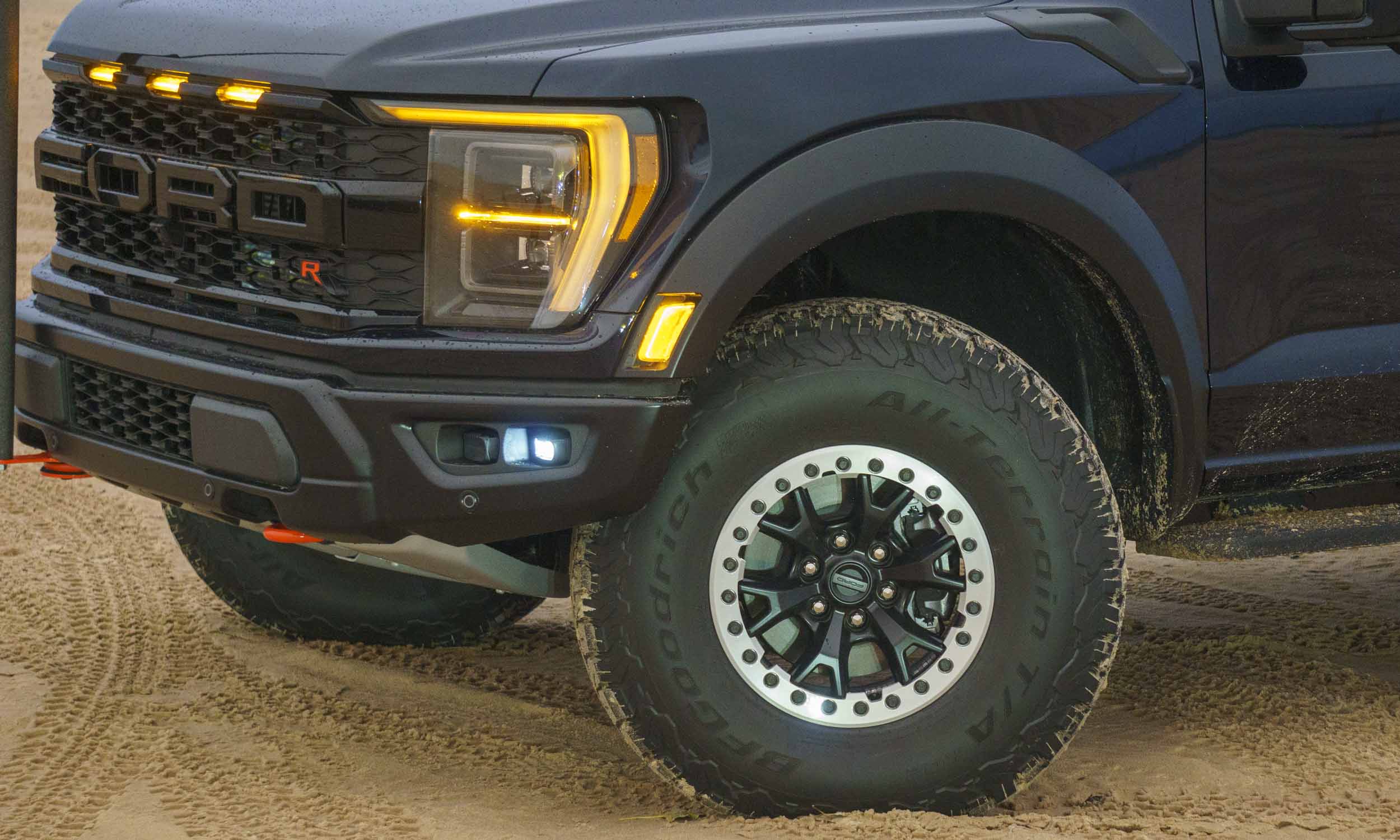 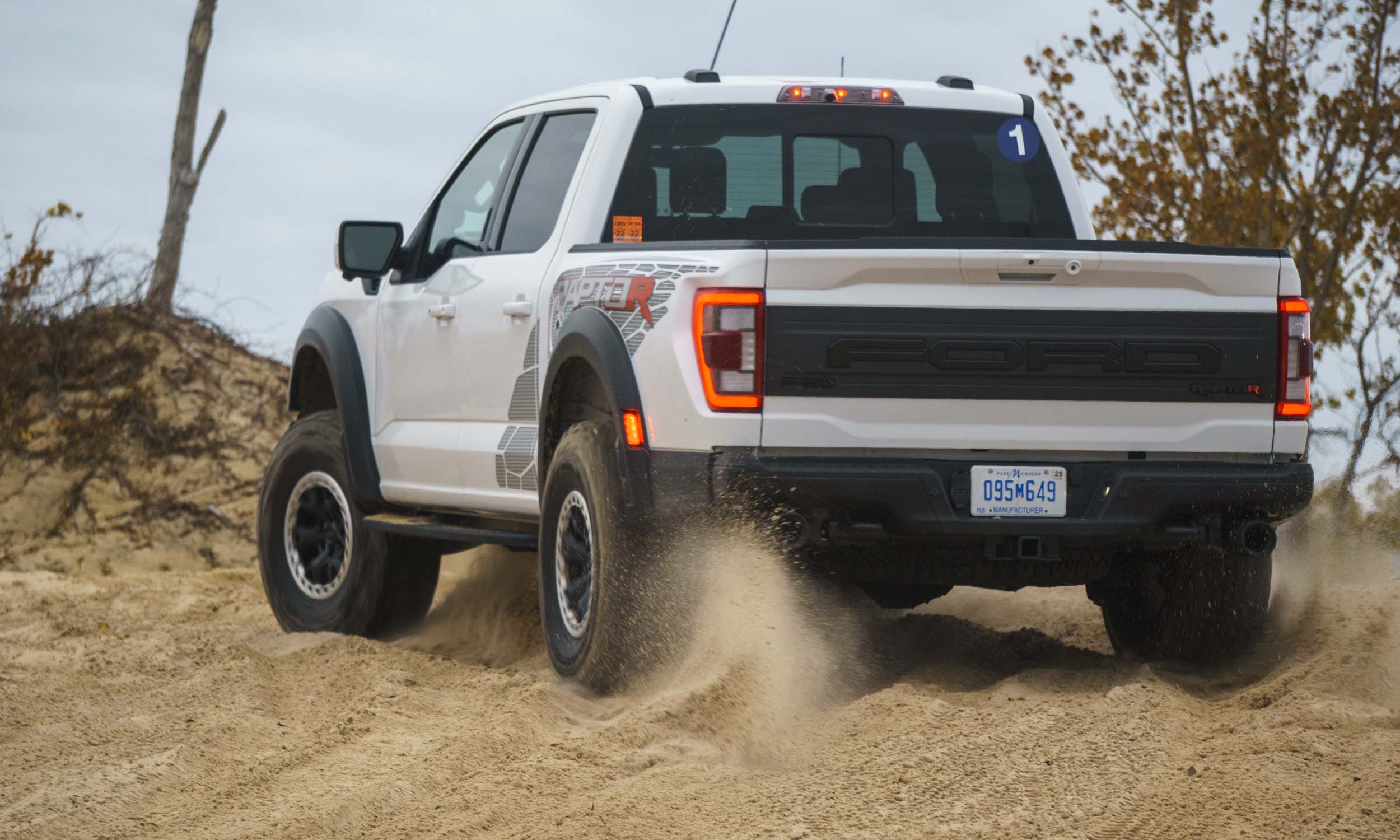 V8 Roar
The standard F-150 Raptor is an impressive off-road machine, but the experience of driving one lacks something vital: the throaty roar of a V8 powerplant. The Raptor R takes care of this omission with a new dual-exhaust system that features a true pass-through muffler with an active valve system that can be adjusted by the driver for Normal, Sport, Quiet, and Baja settings — the latter of which is loud, raucous and awesome. 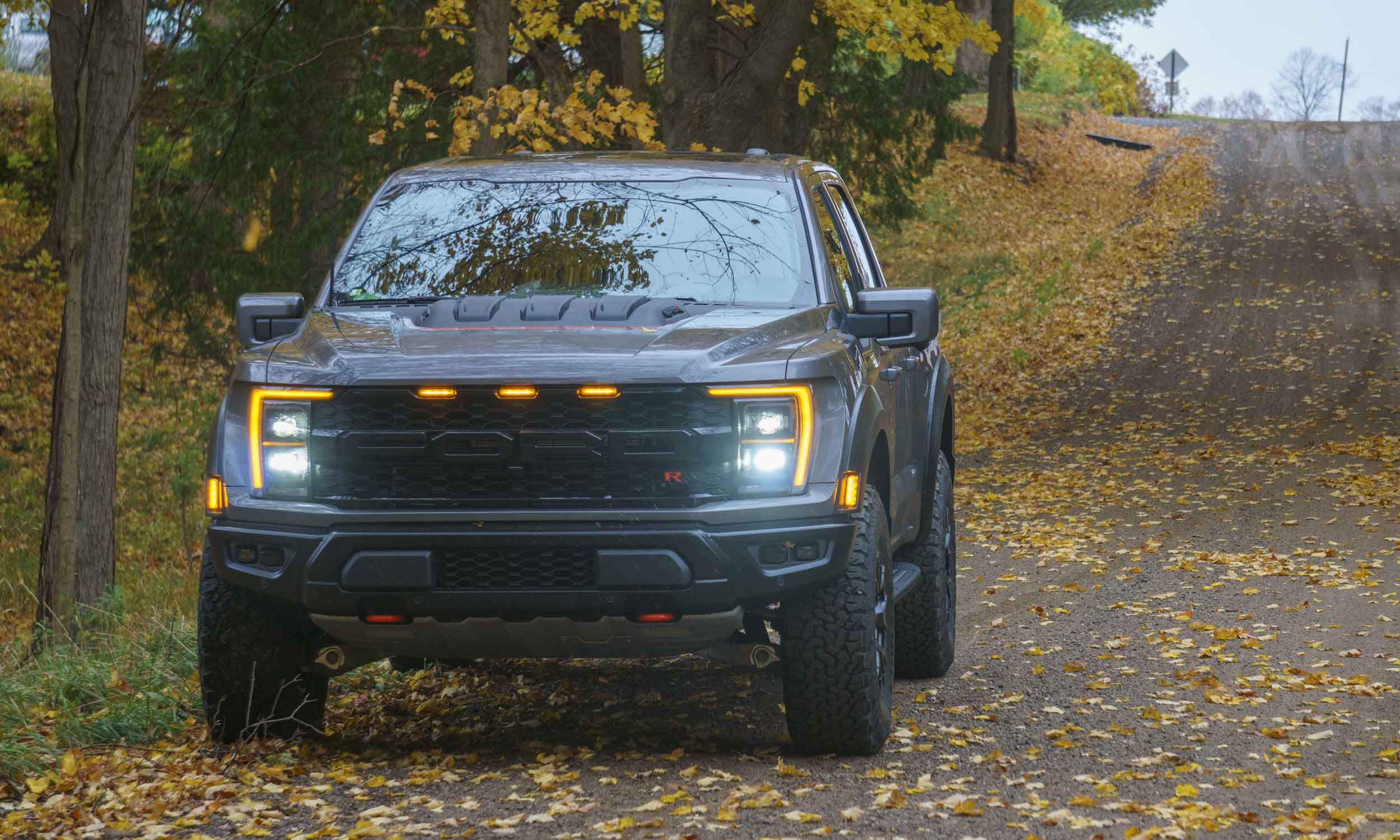 Drive Modes
The Raptor R features multiple drive modes so the driver can set up the truck for whatever lies ahead. These modes also adjust drive, steering, suspension, stability control and more; the driver also has the option to save a custom setting, accessible via an R button on the steering wheel. One change that Ford made from the standard Raptor: Sport Mode now puts the truck into automatic 4WD to ensure maximum traction when unleashing 700 horsepower on the pavement. 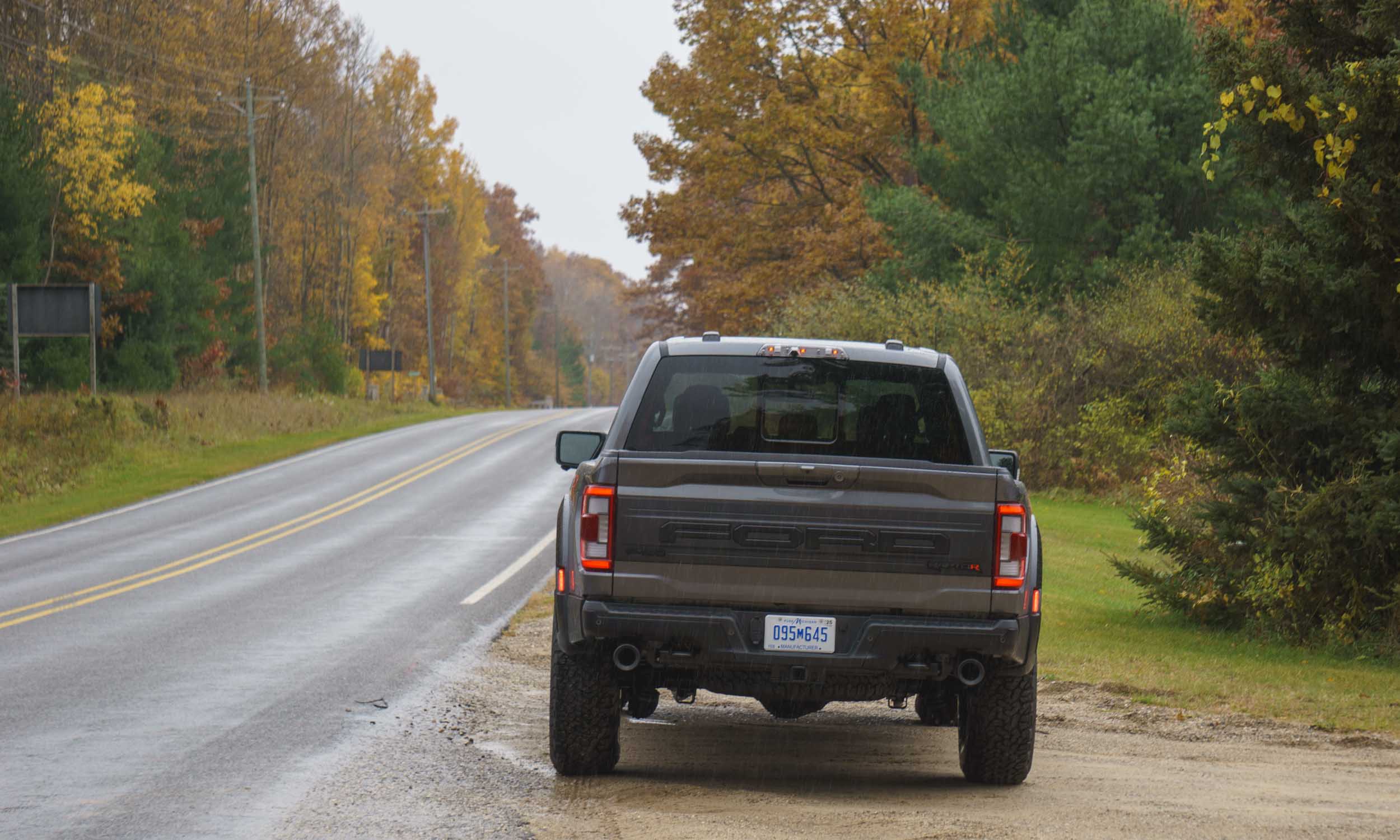 On the Road
Ford invited us to western Michigan to properly experience this latest chapter in the exciting Raptor story. It may be a beast in style and off-road capability, although the truck is surprisingly easy to handle and comfortable when cruising on the road. On the freeway the ride is surprisingly smooth — unexpected considering this big truck rides on 37-inch off-road tires. Going hard on the throttle results in strong acceleration, even when the truck is already traveling at 70 mph. That throttle input is accompanied by a pleasing V8 roar as well as the front end lifting as weight shifts to the rear wheels. 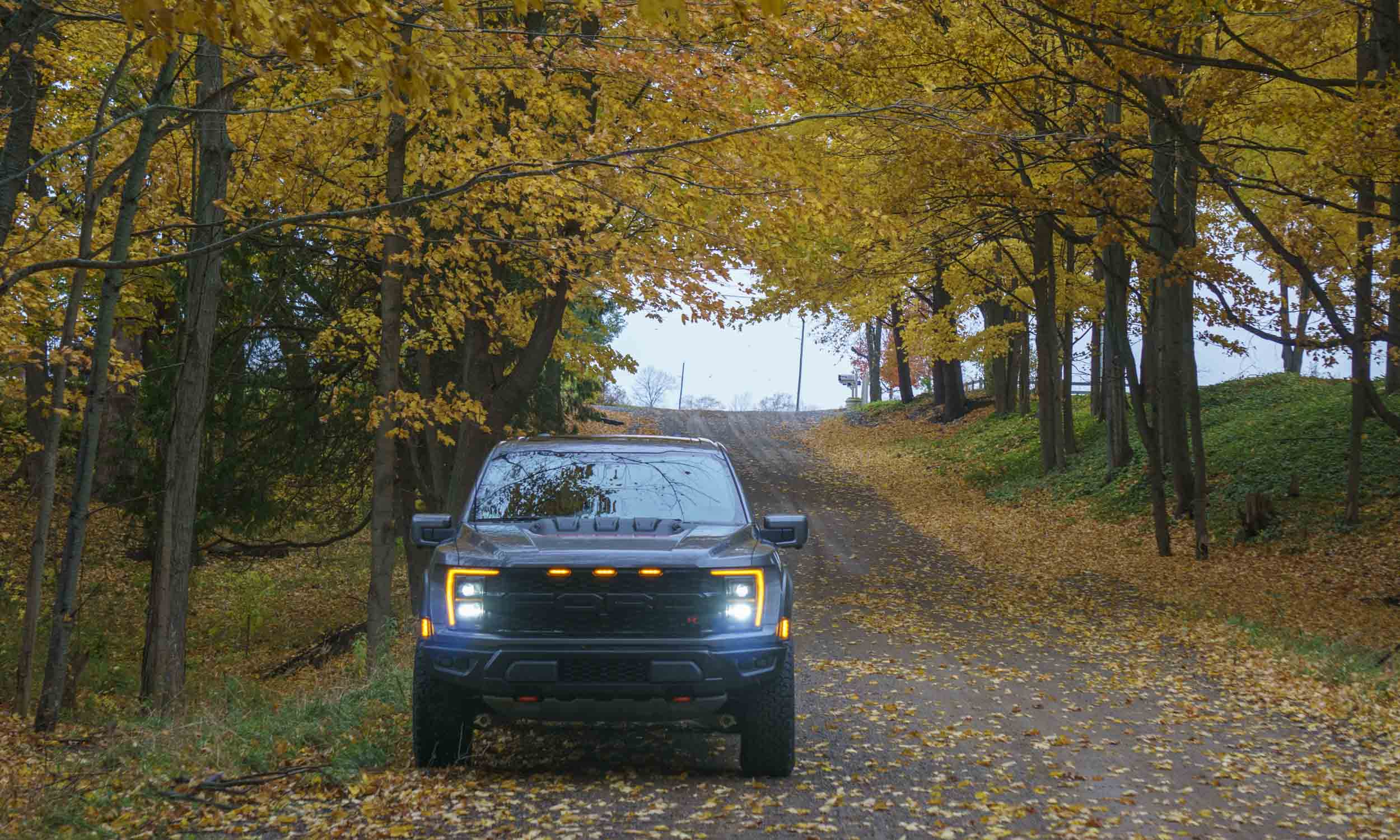 Back Roads
Winding through beautiful Michigan back roads during our drive, the 2023 Ford F-150 Raptor R blasted through fallen leaves on wet roads. It quickly became apparent that this truck has plenty of power although it’s not a sport truck; cornering is not exactly the beast’s forte. Nor is fuel economy — we averaged about 11 mpg during our 60-mile drive. 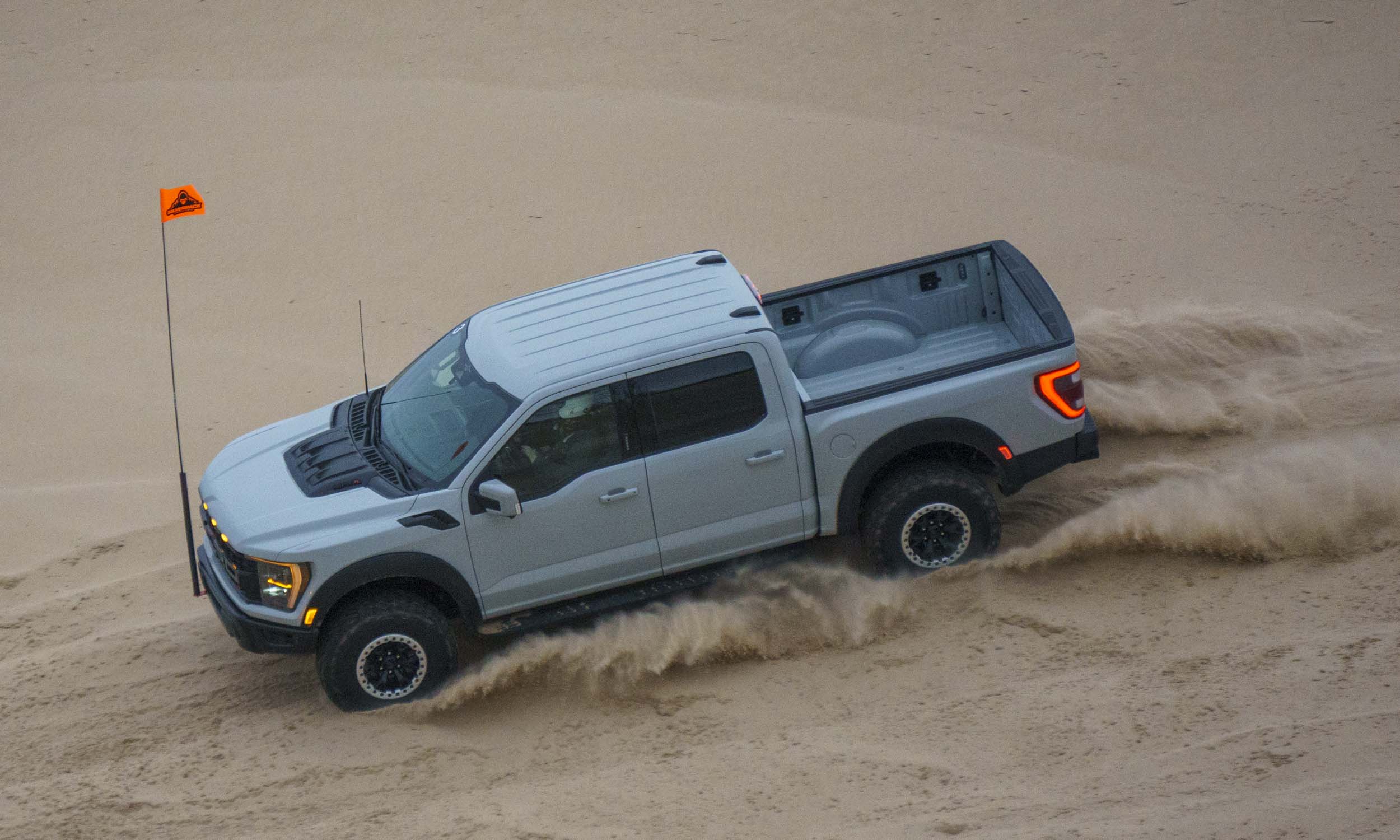 In the Sand
To properly test the Raptor R’s off-road capability we took to the sand dunes at Silver Lake State Park near Mears, Michigan. We first noticed how well the Raptor absorbs rough terrain. Driving at a good clip over washboard-like surfaces would have been incredibly jarring for most vehicles; the Raptor R is surprisingly comfortable over repeatedly rough surfaces. 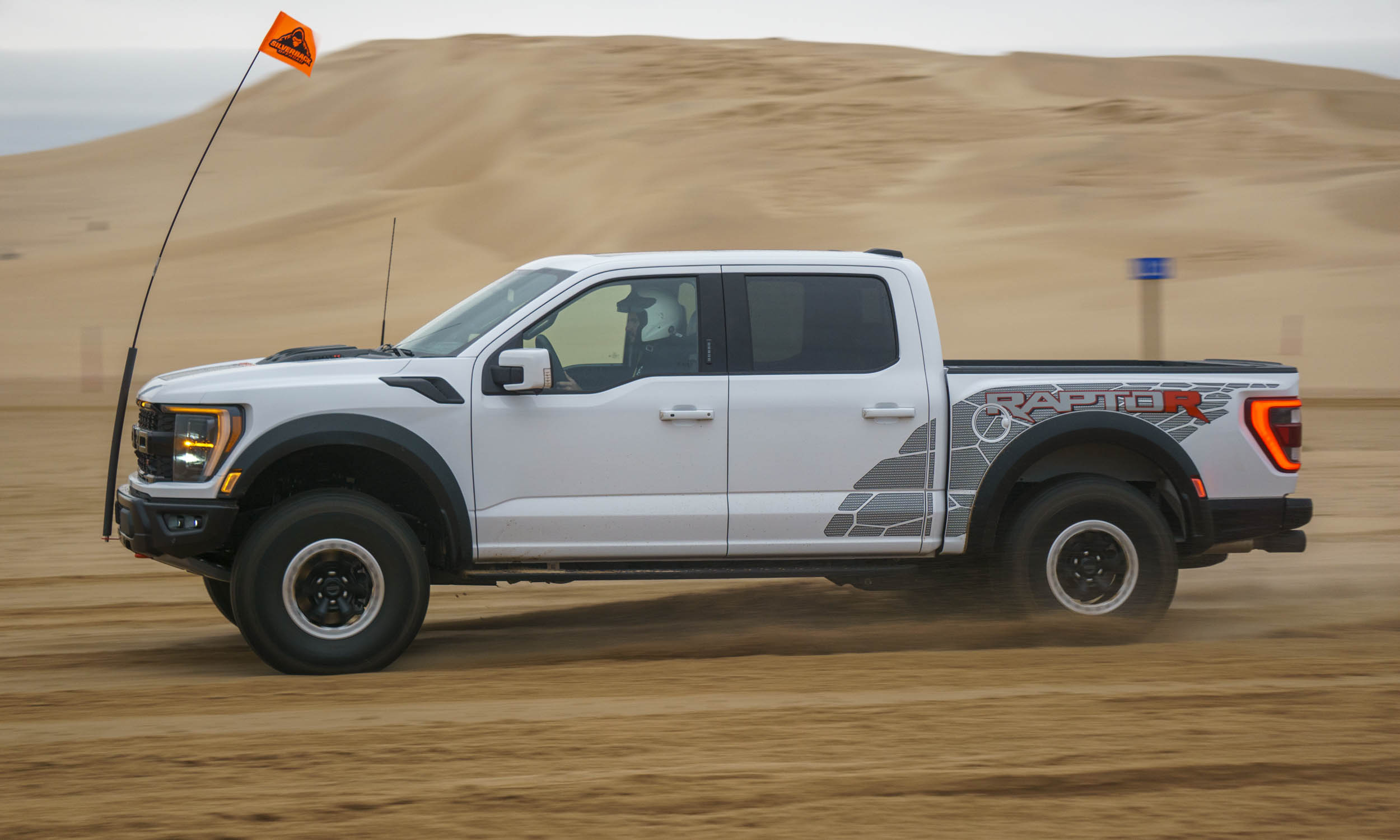 Great Acceleration
On pavement the 2023 Ford F-150 Raptor R moves off the line very quickly; thanks to excellent traction it does the same on soft sand. With the truck in Baja mode we went to full throttle on a long straight section of sand and the Raptor R simply hunkered down, letting the tires spin until they gain traction, then launching with complete control to take advantage of all the V8’s additional power. 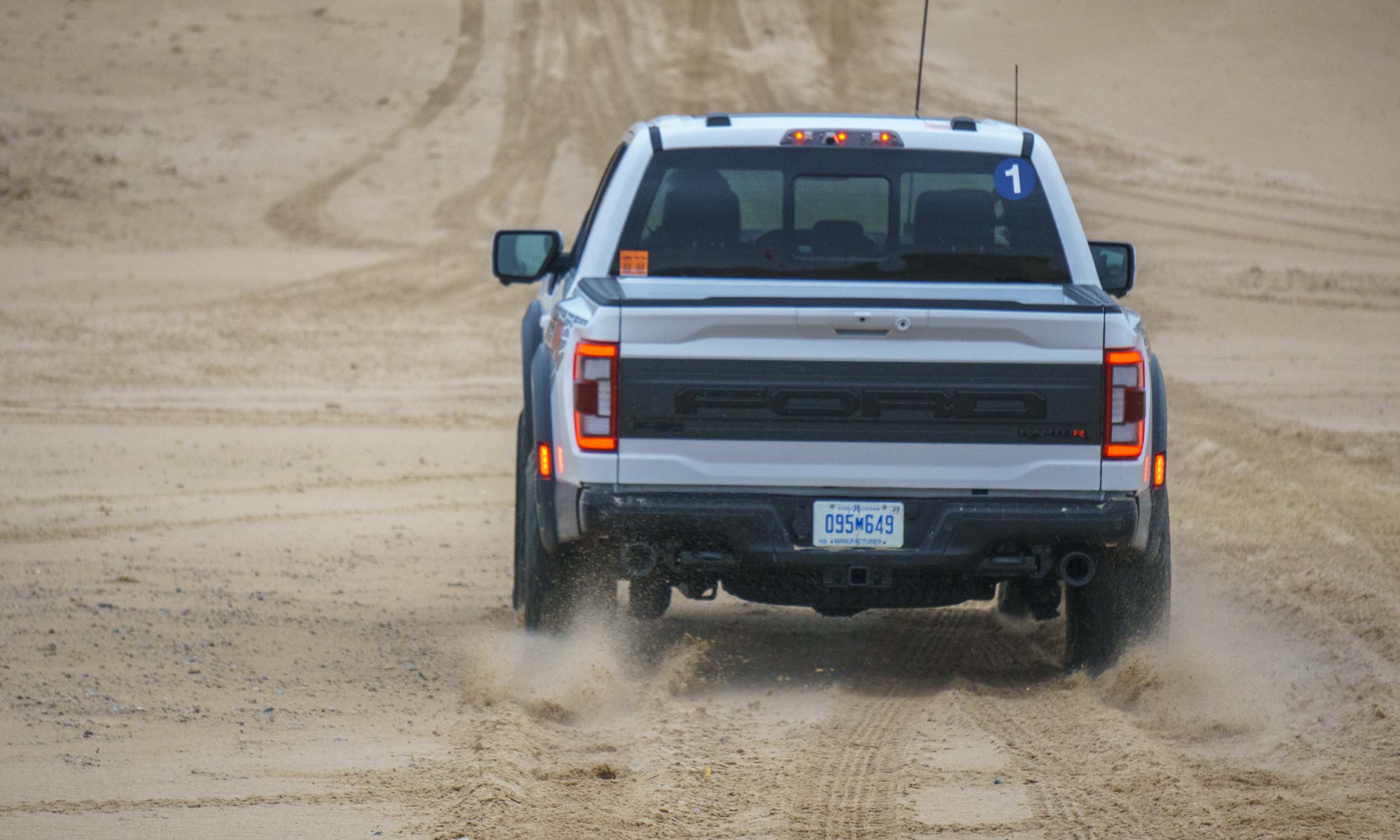 Climbing Dunes
When it comes to capability, the Raptor and Raptor R have similar underpinnings and both can tackle practically any terrain. The Raptor R offers a bit more thanks to extra bursts of power when needed. We took the Raptor R up some steep dunes with crests at the top. Taking a running start, the big truck flew up the dune, and when cresting the brow the Raptor R’s additional power was instrumental in getting over the edge. Thanks to an incredibly predictable throttle, the 2023 Ford F-150 Raptor R makes it easy to add as little or as much power as necessary. 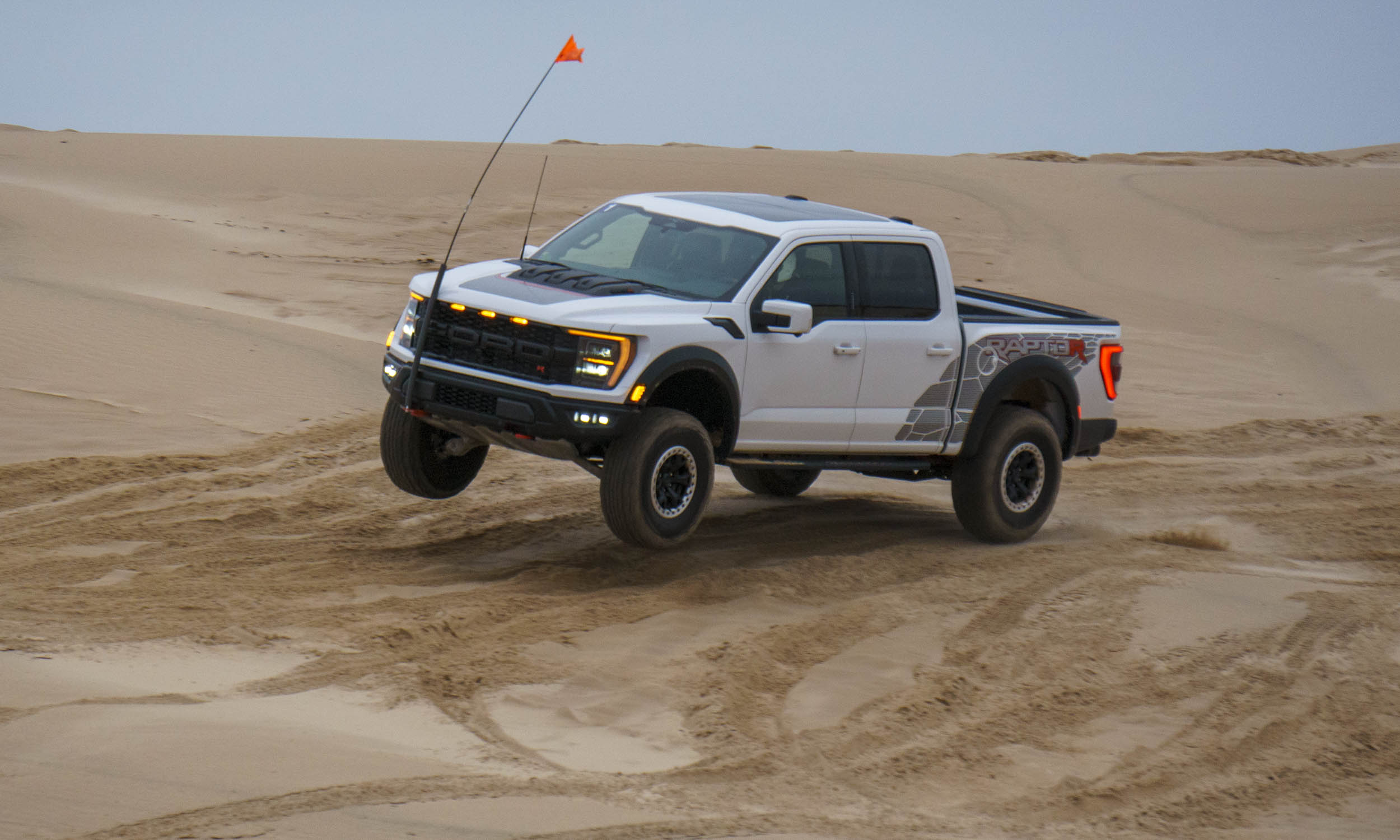 Easy Off-Roader
We spent several hours tackling dunes, running at high speed through deep sand, traversing rocky surfaces, and even launching the truck over jumps. Beyond the Raptor R’s impressive capability, we were most impressed by the truck’s smooth ride. Usually after severe off-roading in most pickups, the driver can feel beat up by the end of the run, although this is not the case with the Raptor R. The big seats are comfortable and the suspension eats up rough terrain, making transfers between all types of ever-changing terrain shockingly comfortable. We could have easily spent the entire day playing in the sand. 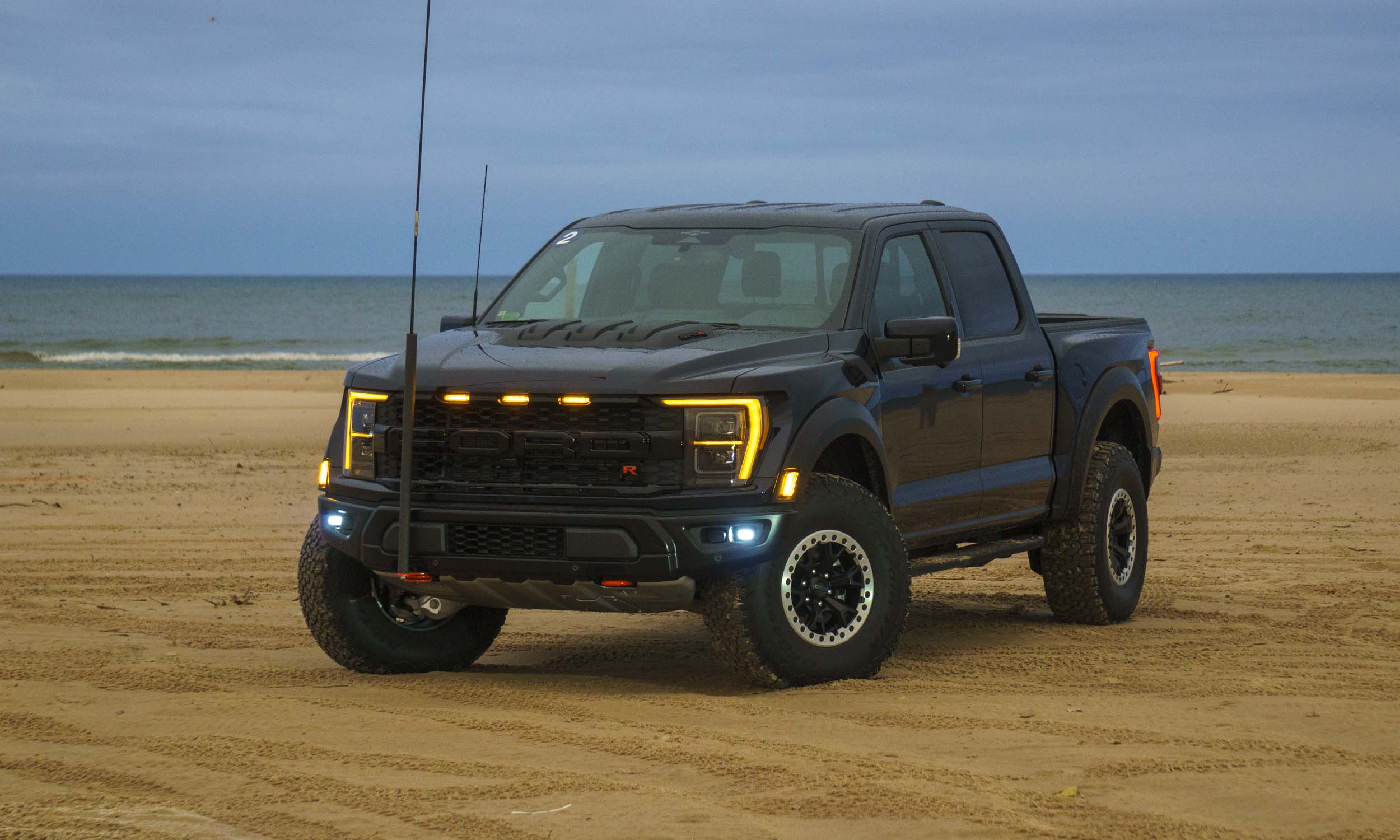 Right for You?
The 2023 Ford F-150 Raptor R is an ideal choice for off-road enthusiasts who want a truck that’s ready to hit the trail directly from the factory. With extreme looks and now a powerful V8 powertrain — and its accompanying throaty exhaust note — the Raptor R can tackle just about any terrain and does so while keeping its passengers incredibly planted and comfortable. On pavement or off, this truck is an impressive machine that will turn heads and bring a smile to those lucky enough to be driving it. 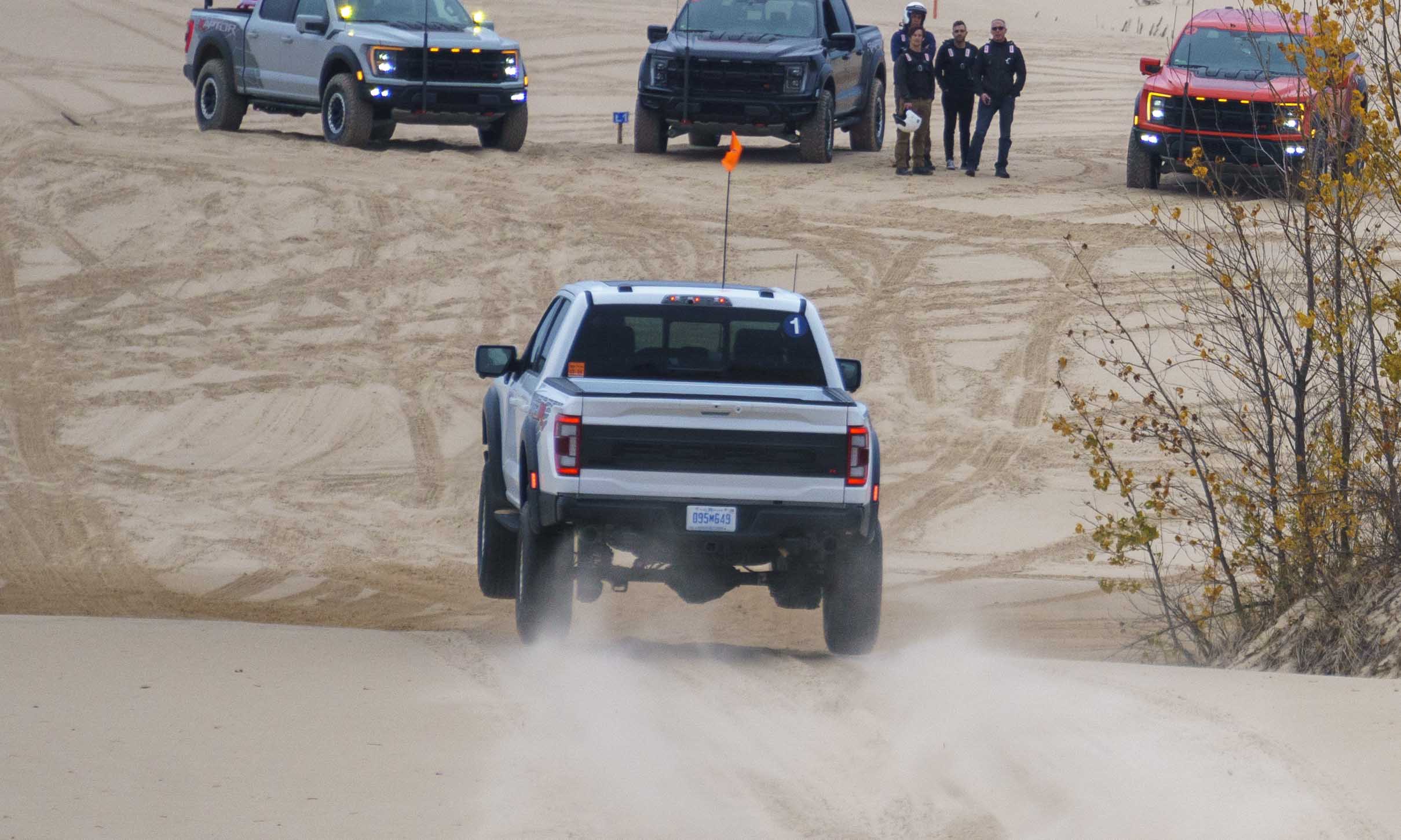 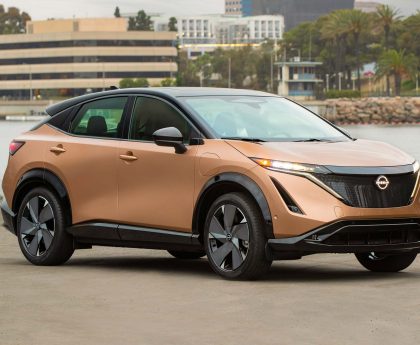 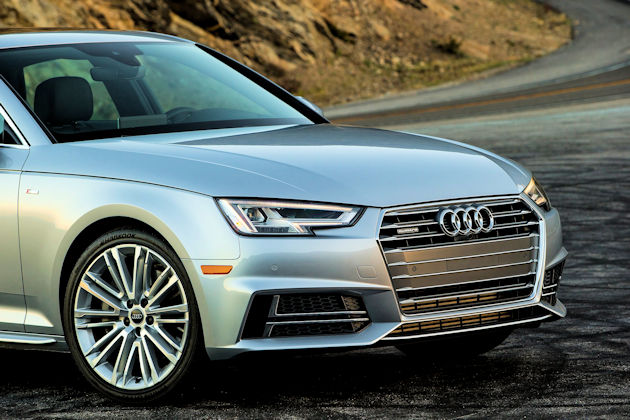