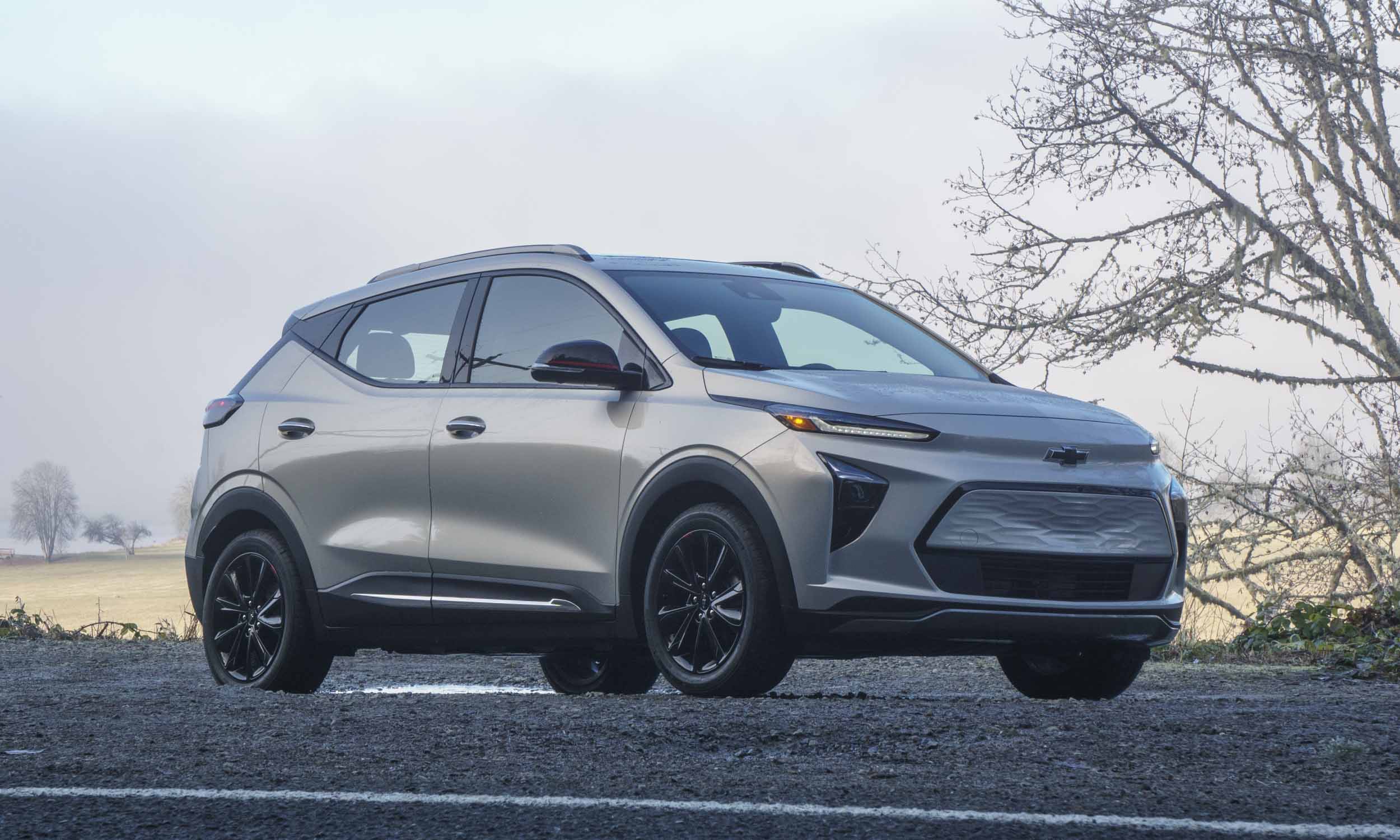 What Is It?
About five years ago, Chevrolet introduced the Bolt EV as one of the most affordable electric vehicles in the U.S. with a range of more than 200 miles. Since that time, the competitive landscape has changed dramatically with many new EVs coming to market. To keep up with the new models and innovations, last year Chevrolet updated the Bolt EV with fresh styling, new features and, at the same time, added the larger 2023 Chevrolet Bolt EUV crossover. 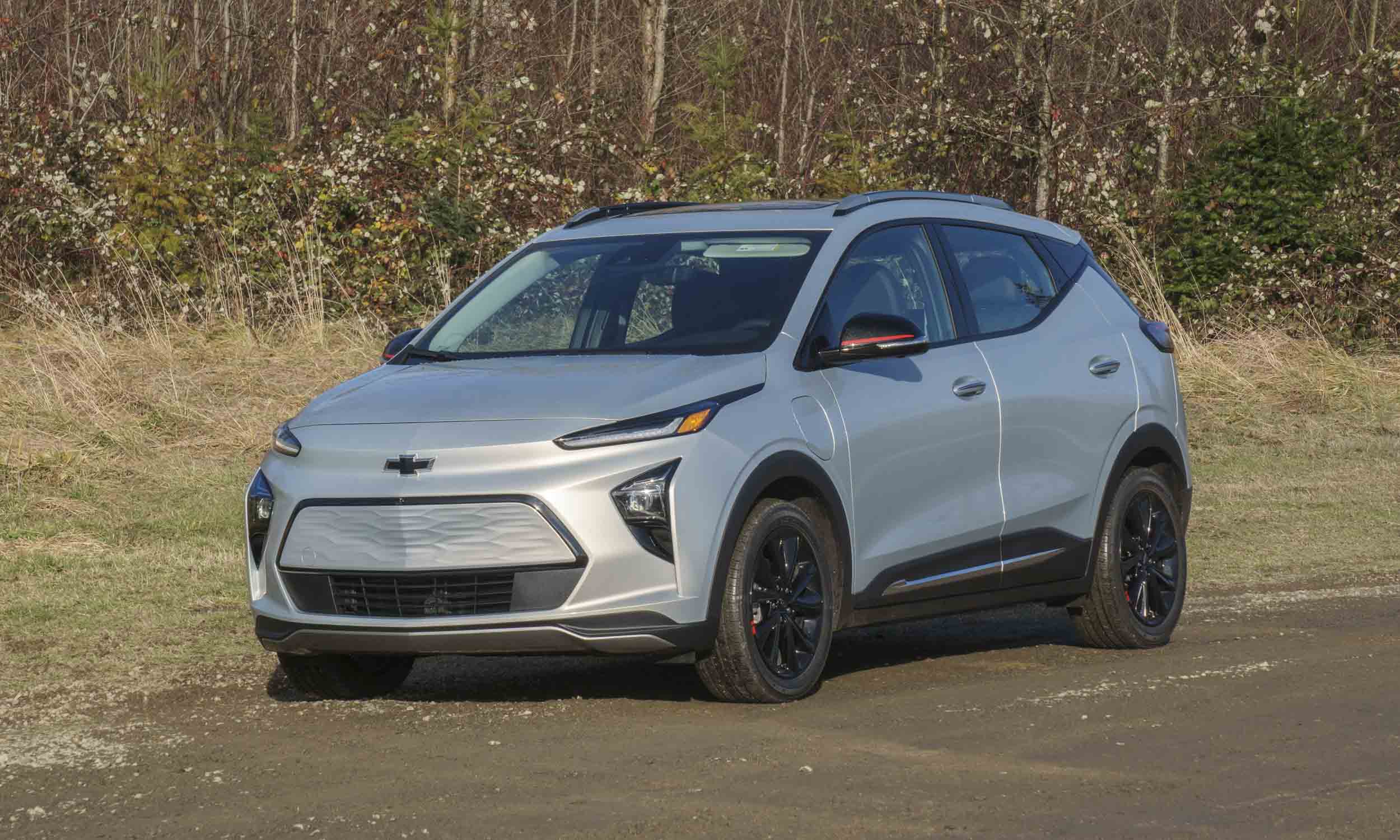 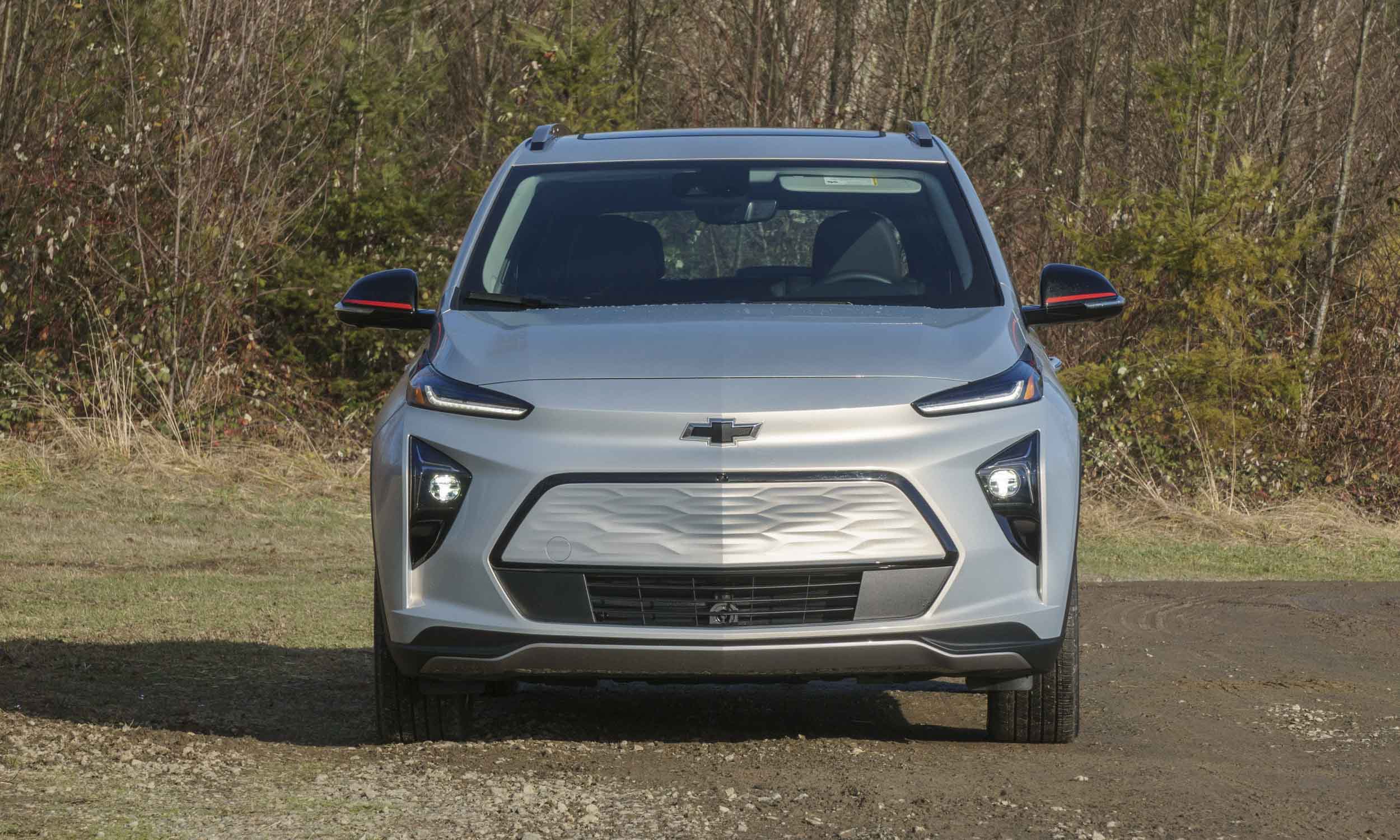 Styling
The Bolt EUV has a sleek look with slim LED running lights that flow around the front corners to the fenders. The front fascia and grille feature unique sculpting flanked by vertical headlights designed to set the EUV apart from the Bolt EV. Standard roof rails also offer some SUV-like styling. Overall the Bolt EUV is about 6 inches longer than the standard Bolt EV, with a 3-inch-longer wheelbase. 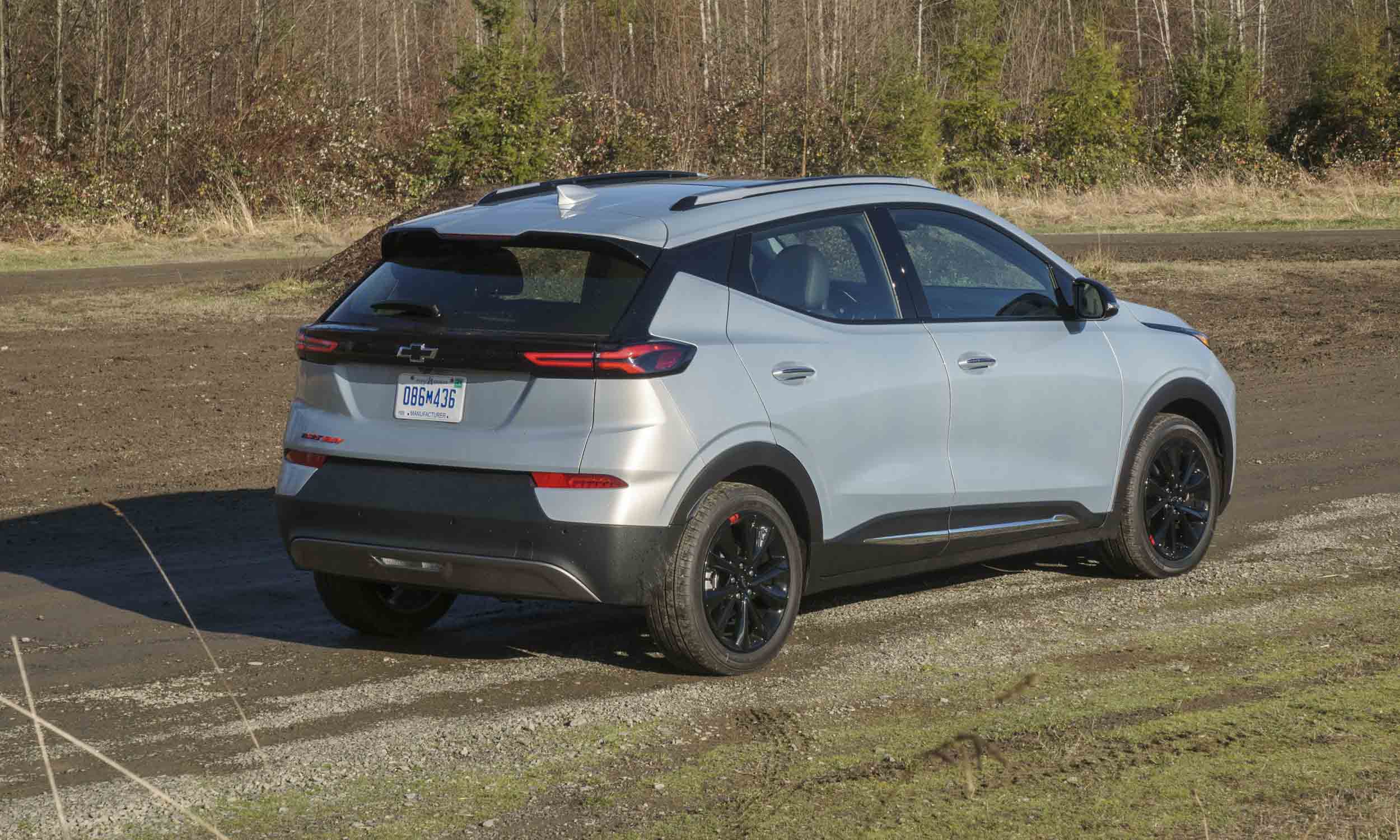 Redline Appearance
The 2023 Chevrolet Bolt EUV test vehicle we drove stood out thanks to a Redline Appearance package that adds 17-inch gloss black wheels with red accents, red accent stripes on the mirrors, and red and black rear badges. 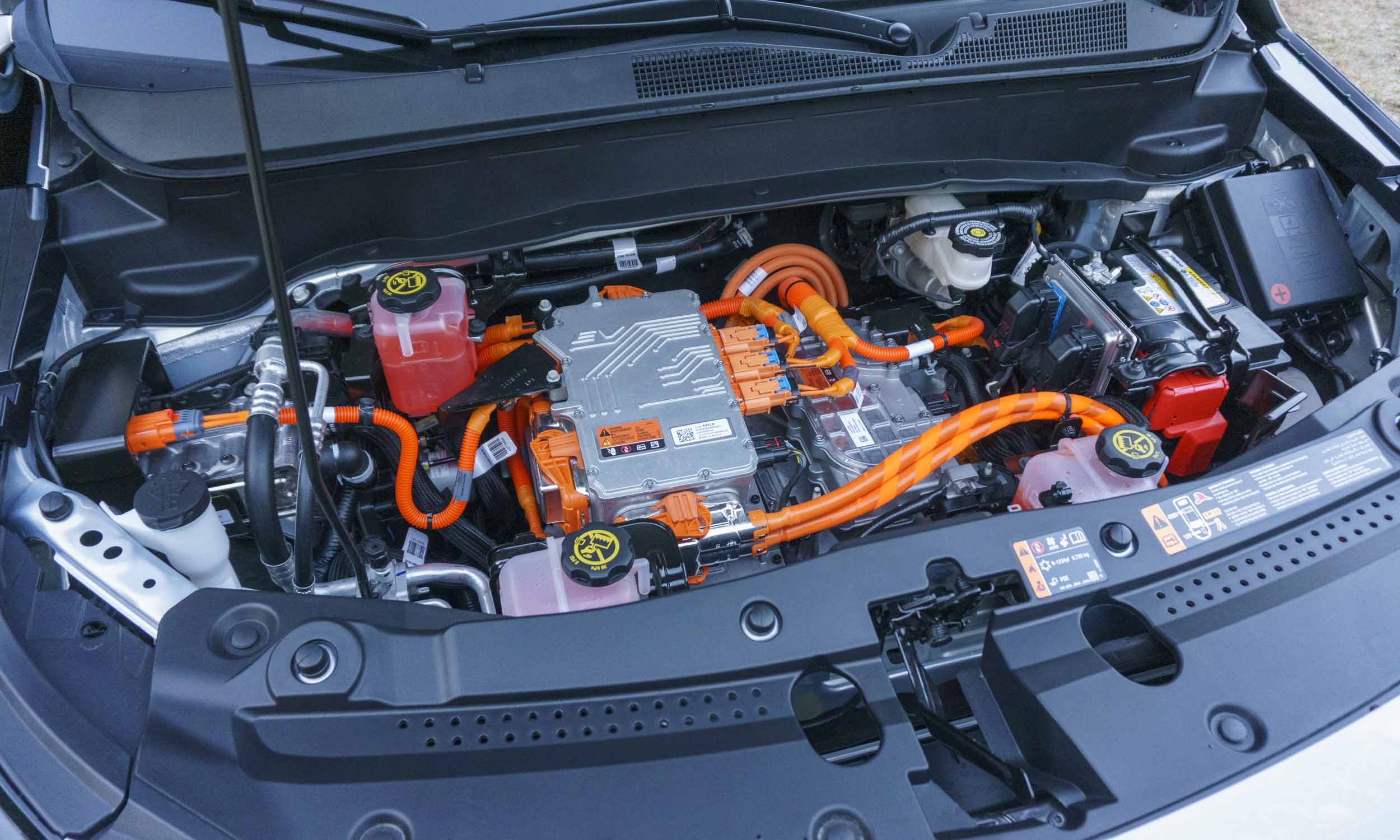 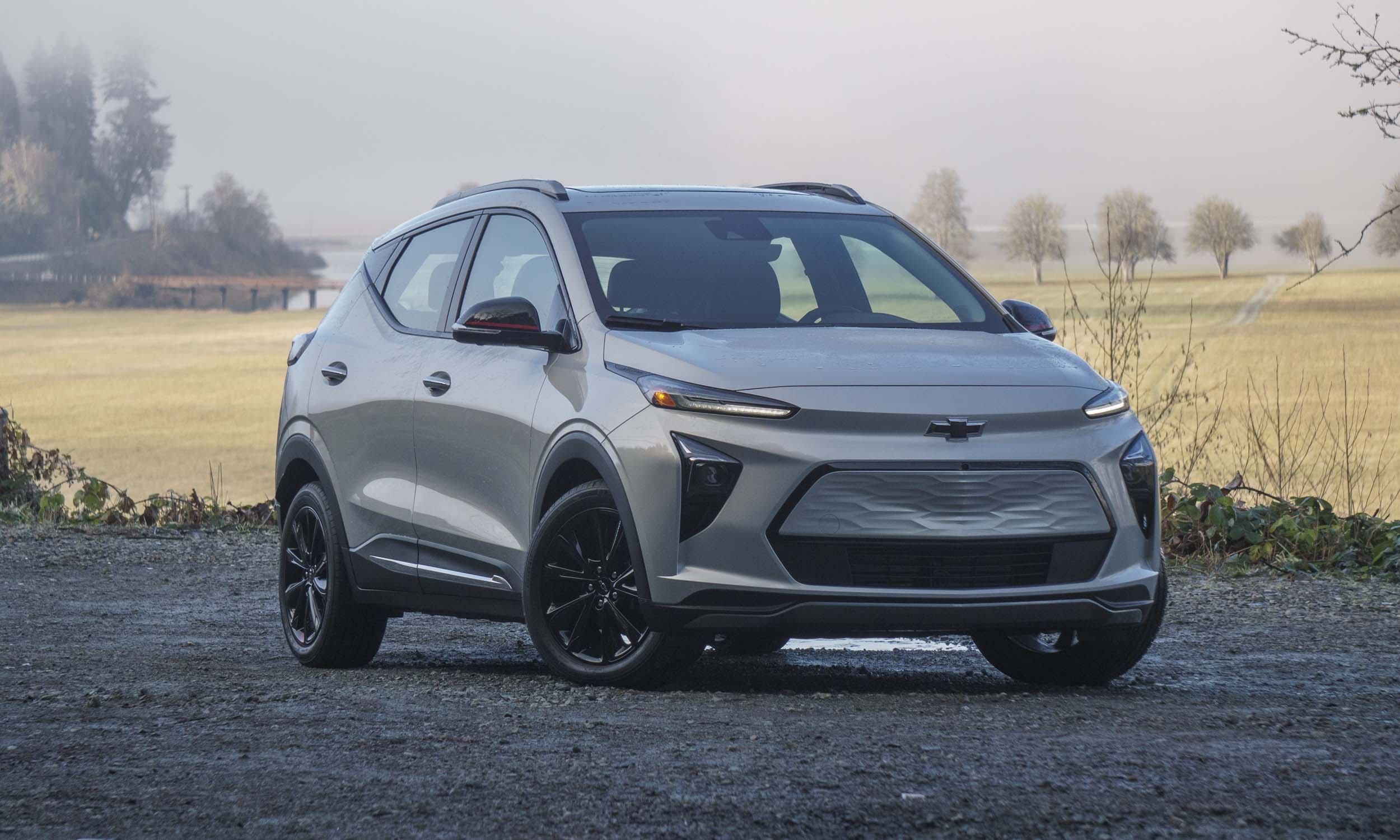 Efficiency
One of the most fuel-efficient vehicles on the road, the 2023 Chevrolet Bolt EUV has U.S. EPA fuel-economy ratings of 125 MPGe city / 104 MPGe hwy / 115 MPGe combined, with a range of 247 miles from its 65 kWh battery pack. During our drive the trip computer indicated 2.8 miles/kWh, equating to 94 MPGe, and a full battery showed a 196-mile range. Even though both were below the EPA ratings, this is likely a result of the below-freezing temperatures we experienced during the loan, which can reduce battery efficiency. 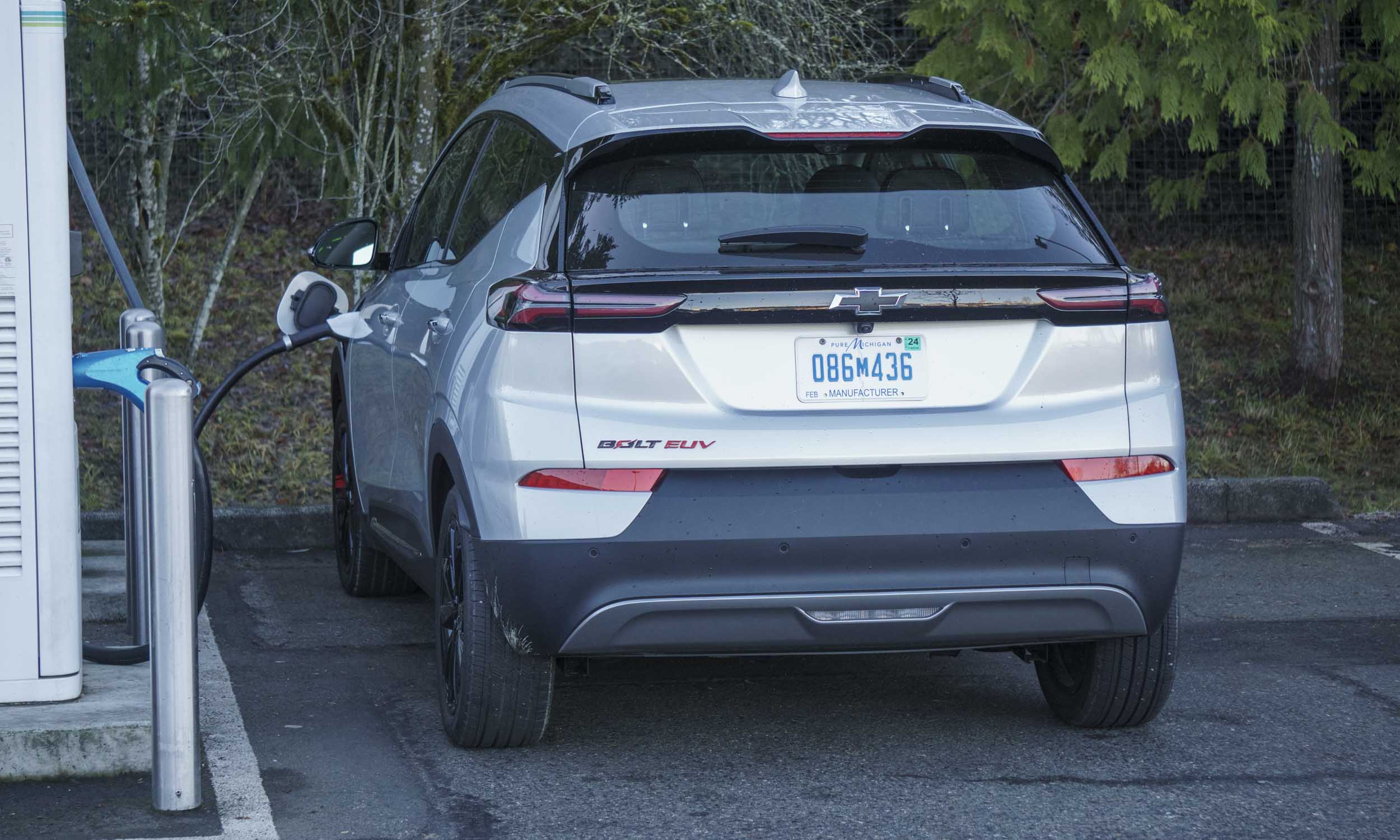 Charging
According to Chevrolet, the Bolt EUV can gain four miles of range for every hour plugged into a standard household outlet, so a full charge from empty would take more than 60 hours. That means an overnight charge can deliver close to 50 miles of range, so it’s not as bad as it sounds. With a Level 2 charger, it takes the Bolt EUV about 7 hours for a full charge. With a DC fast charger, the Bolt can theoretically add 100 miles of range in about 30 minutes; however, that was not our experience. The best we achieved from a DC fast charger was a 24 kWh connection that would take 55 minutes to go from 50 percent to 80 percent charge — considerably slower than expected. 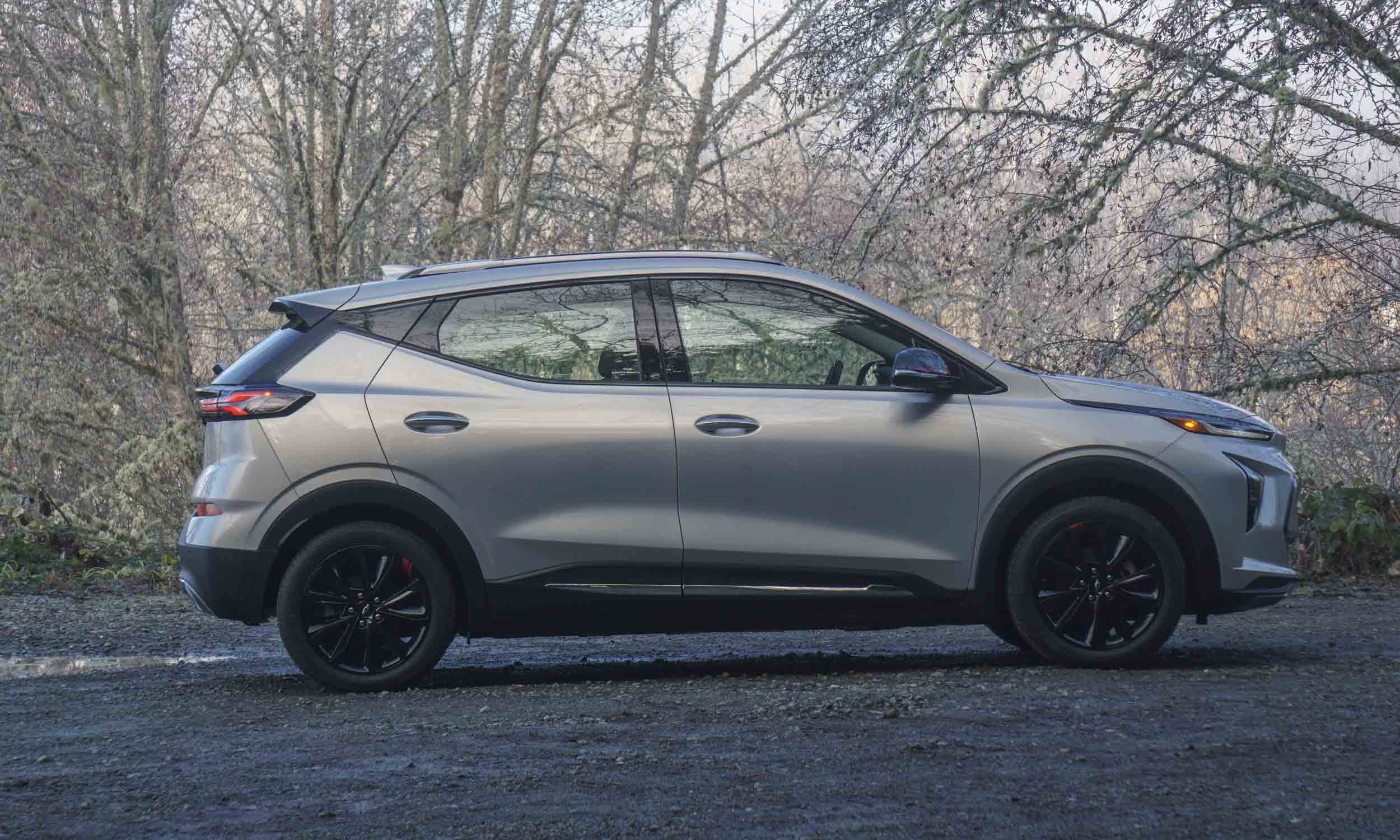 Older Platform
General Motors has announced plans to produce several new electric vehicles in the next few years. All will be built on the company’s new Ultium battery-electric vehicle platform. The updated Bolt EUV rides on the original Bolt EV platform, which doesn’t have the range or the fast charging ability of newer models on the horizon. 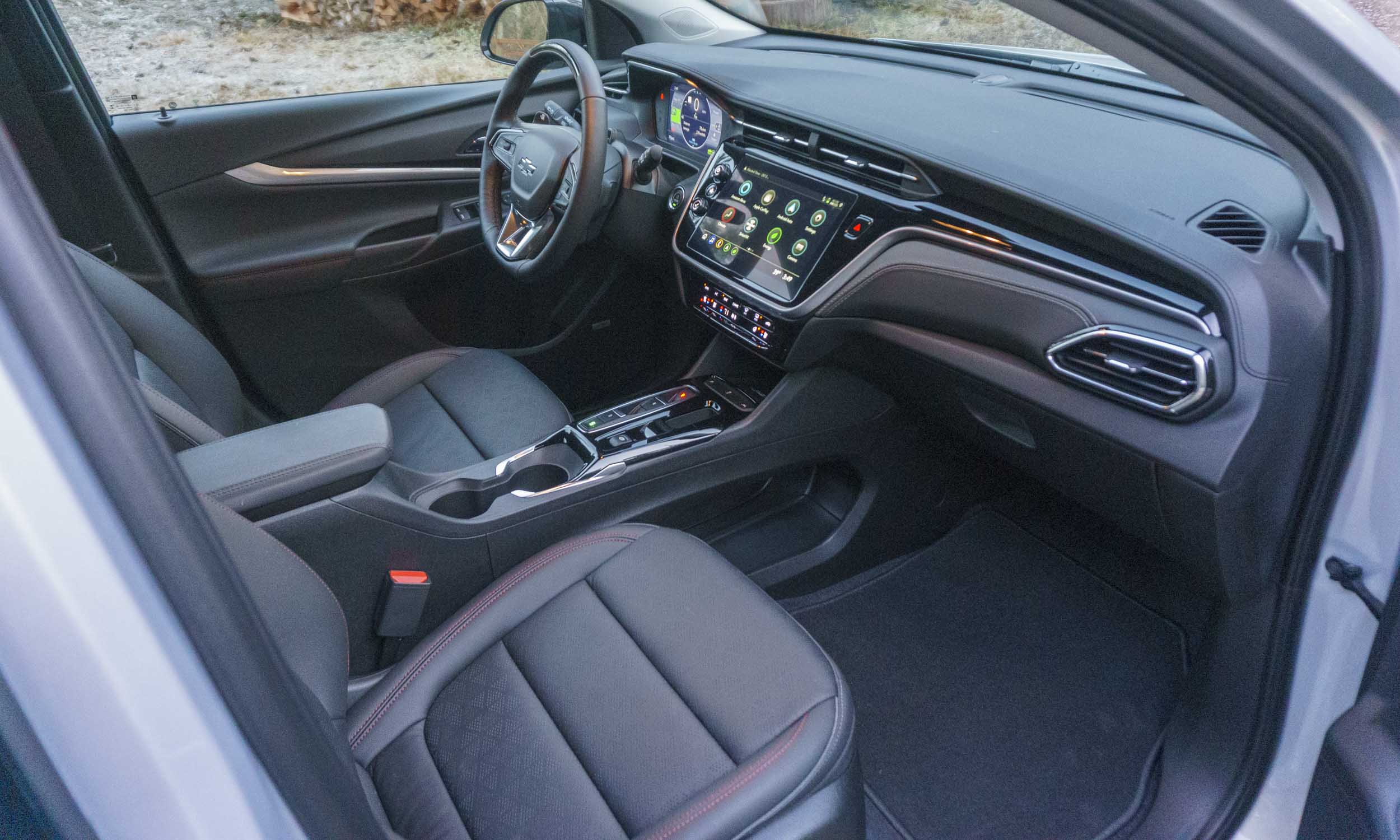 Inner Space
The Bolt EUV’s cabin has a high-tech premium vibe thanks to a new 10.2-inch touchscreen display that integrates cleanly at the center of the leather-trimmed dashboard, and a driver-configurable 8.0-inch digital gauge cluster. We appreciate the physical buttons for home and volume alongside the infotainment display, although the additional dial / selector seems redundant to the touchscreen operation. Climate controls are separate for easy access without digging into the menu. Overall, the car has a clean design with minimal buttons and a simple gear selector neatly placed in the center console. 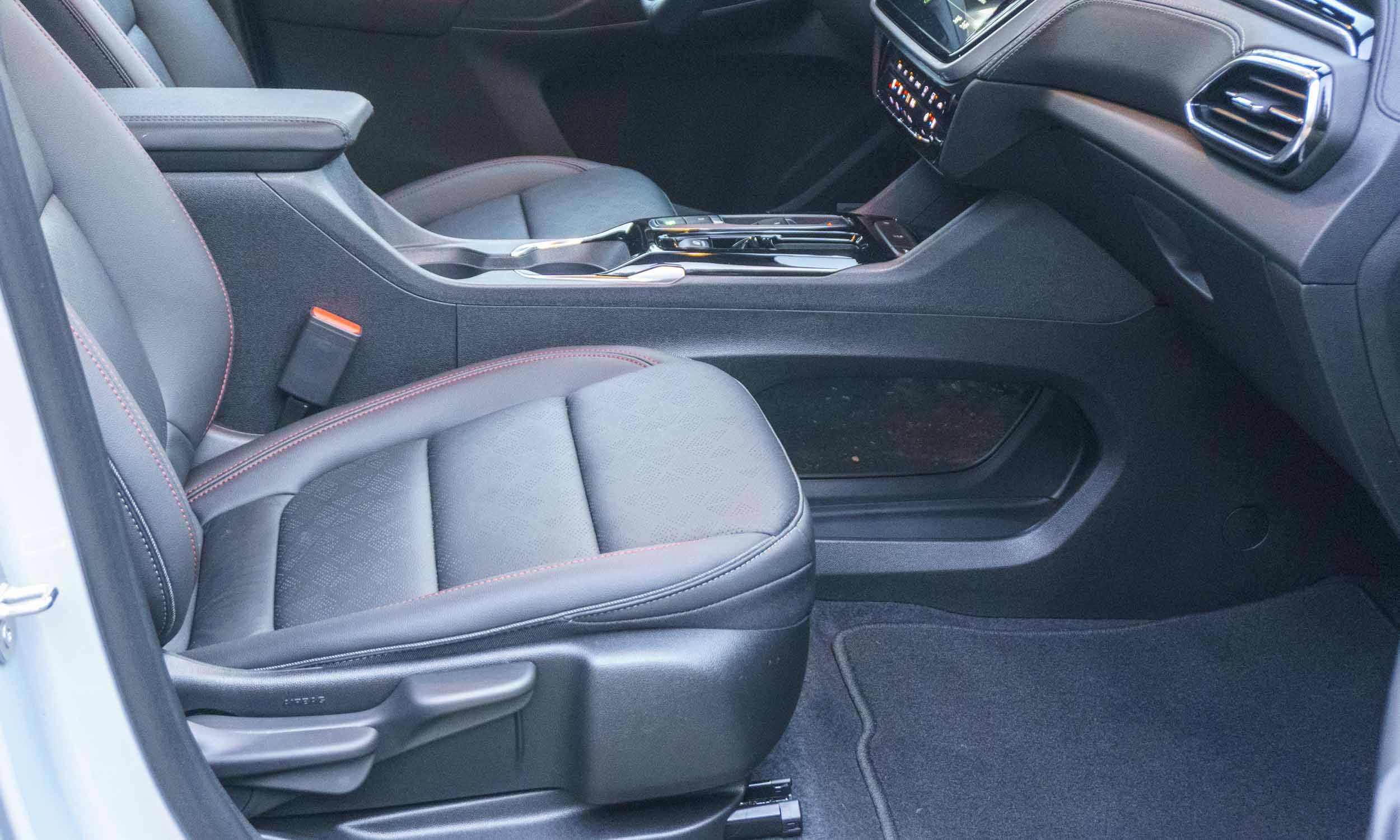 Decent Storage
Designers of the 2023 Chevrolet Bolt EUV took advantage of the electric drivetrain to provide additional storage in the cabin. A covered storage bin resides between the front seats, while an open space below the center console works great for bags or other bulky items. A wireless phone charger and dual USB port are conveniently located ahead of the gear selector. 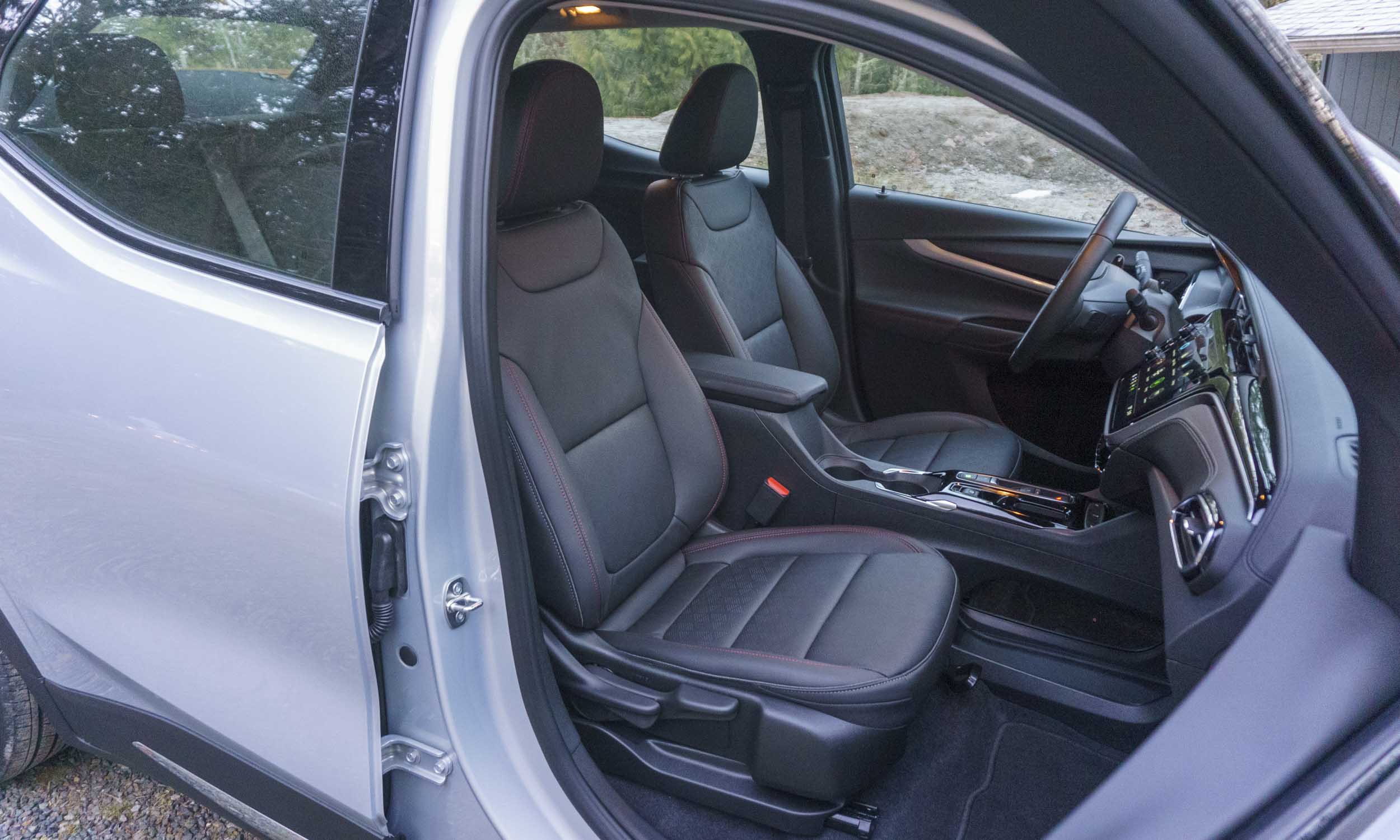 Front Seats
The front seats of the Bolt EUV are stylish and comfortable, featuring leather trim and red stitching as part of the Redline Appearance package. Seats are power adjustable and feature heating and ventilation — the former turned out to be advantageous during some unseasonably wintry weather we experienced in the Pacific Northwest while testing the Bolt EUV. 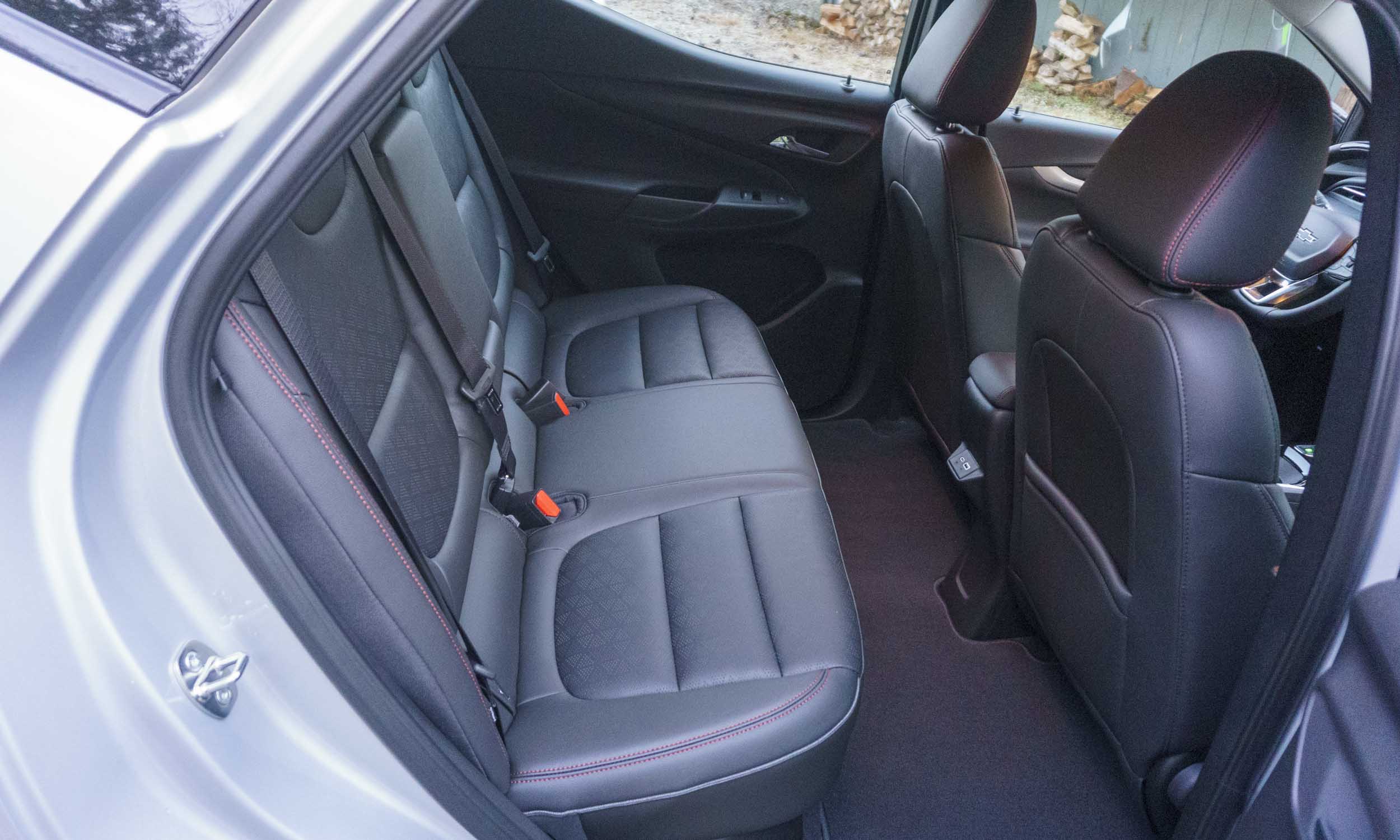 Rear Seats
It may look small from the outside, but the Bolt EUV has a surprisingly spacious rear seating area. The longer wheelbase translates to an additional 3 inches of legroom vs. the standard Bolt EV. The middle seat is not as comfortable because of more rigid seat cushions; however, the flat floor means no obstruction or hump in the middle. The outboard rear seats are heated, and dual USB ports are a nice addition. 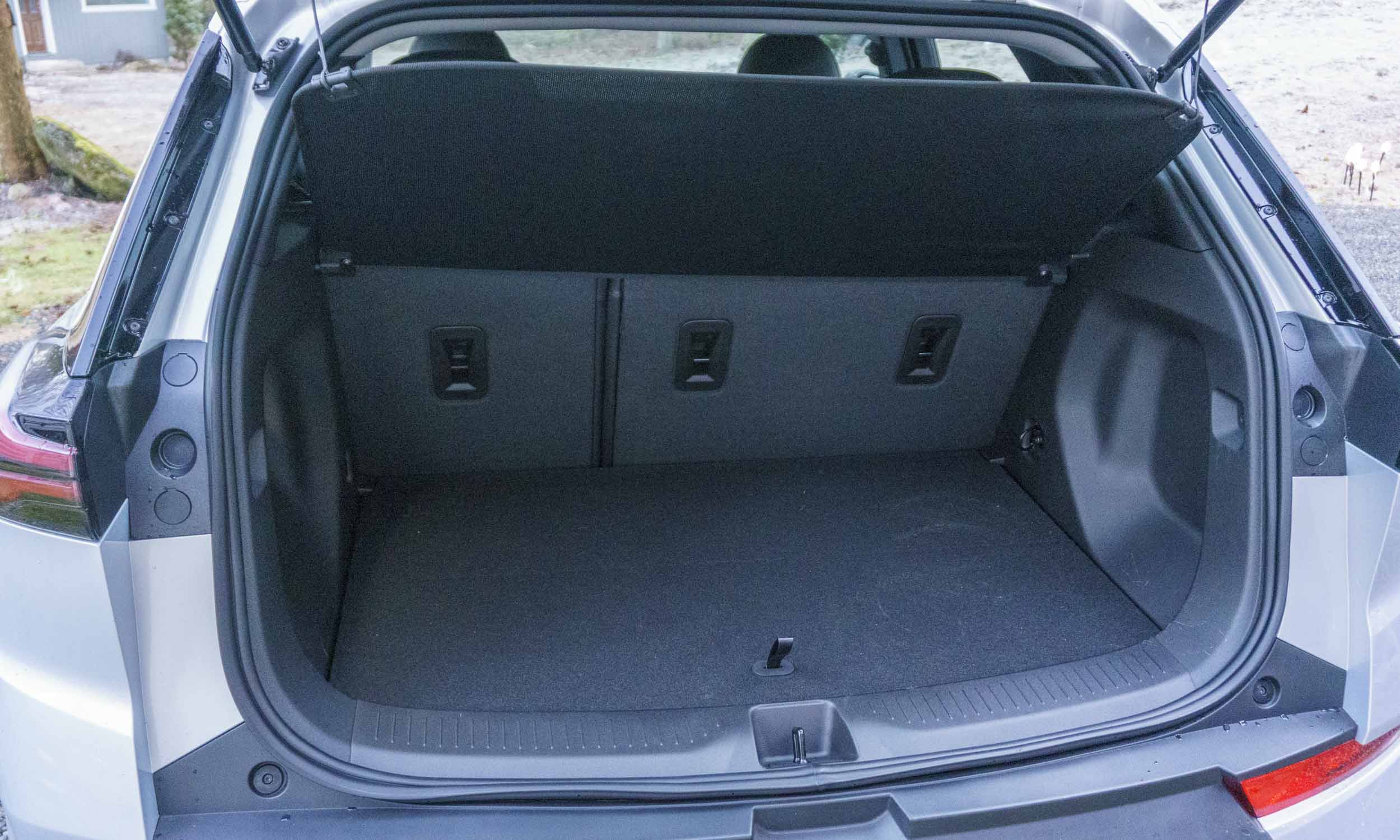 Cargo Space
The Bolt EUV offers a reasonably roomy cargo area with enough space for a few small bags. The built-in cargo cover keeps prying eyes away, and for additional security the crossover has a small space below the cargo floor — excellent for storing the charging cable. With the seats folded flat, the EUV boasts 57 cubic feet of storage space. 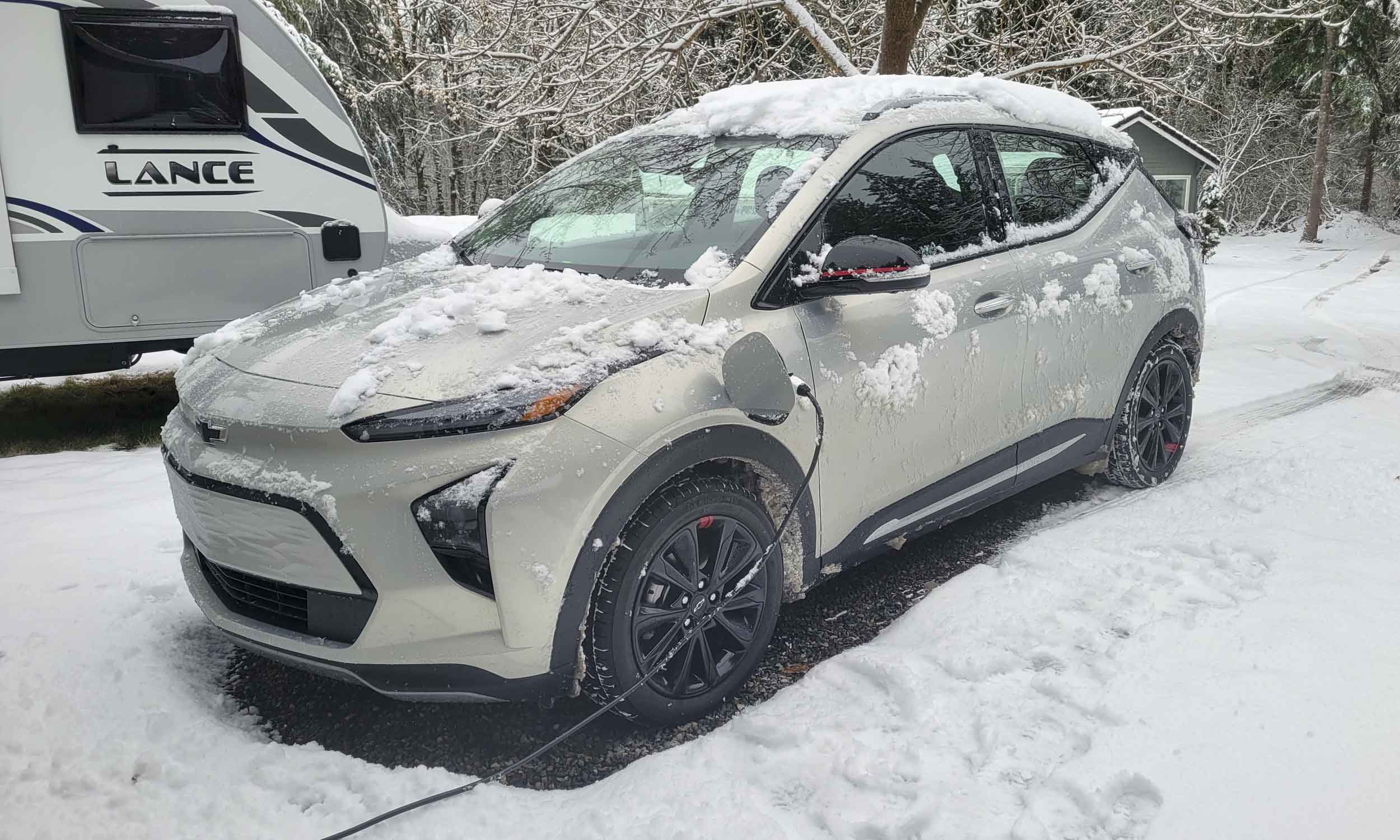 Remote Start
A significant advantage to an electric vehicle is its ability to heat up quickly, even in sub-freezing winter weather, which can be accomplished with the Bolt EUV plugged in. Even better, the small crossover can be started via the remote — a welcome feature on cold mornings. We remote-started the Bolt EUV from inside the house and went out to the car five minutes later to find it warm and toasty, with all ice melted from the windows. 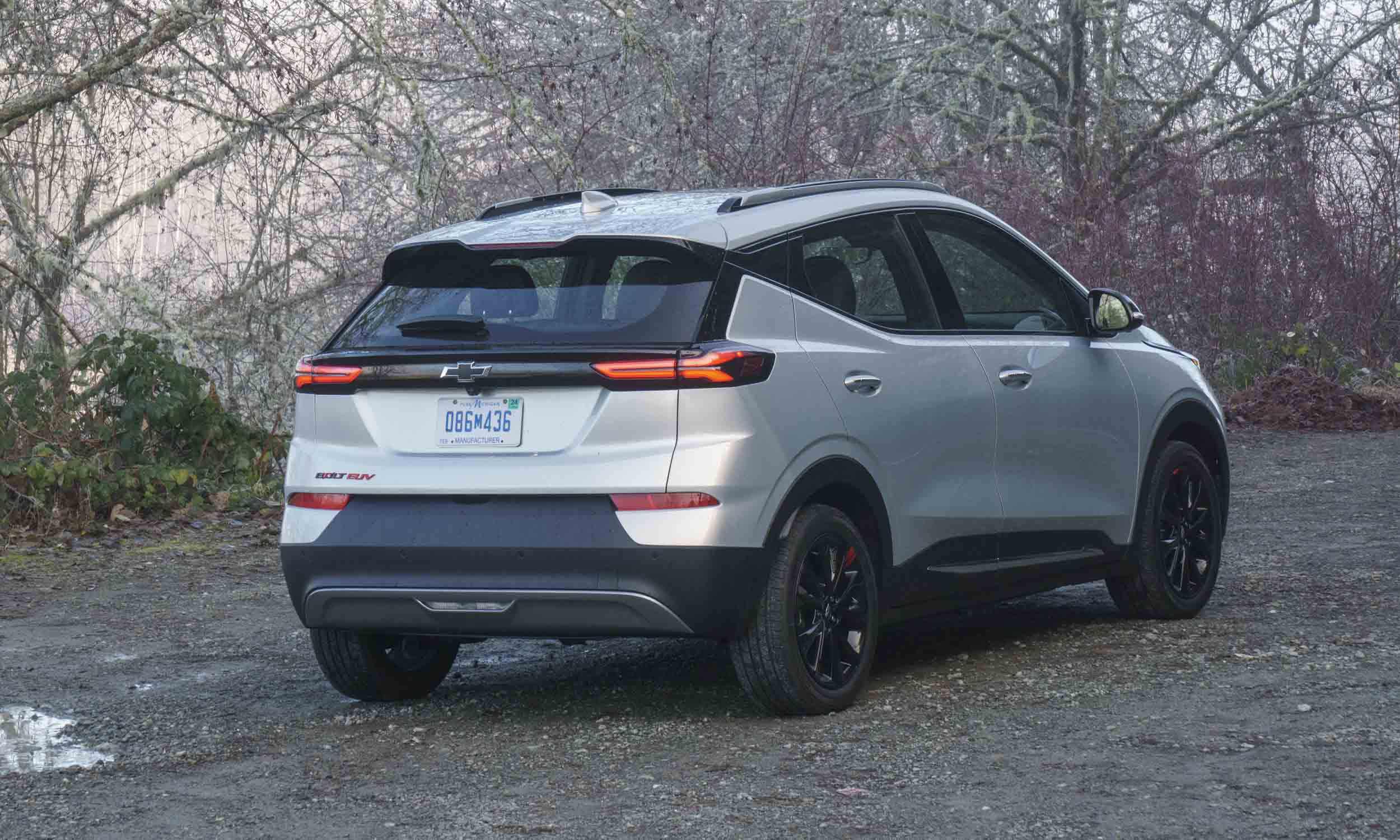 On the Road
Small economy cars used to have anemic power and loud engines. The 2023 Chevrolet Bolt EUV showcases the advantages of a small electric vehicle. The ride is silent and comfortable with little road noise penetrating the cabin. With plenty of low-end torque typical of electric powertrains, the Bolt EUV feels quick and confident. Even at highway speeds, this little car accelerates quickly. Steering is responsive and so are the brakes. 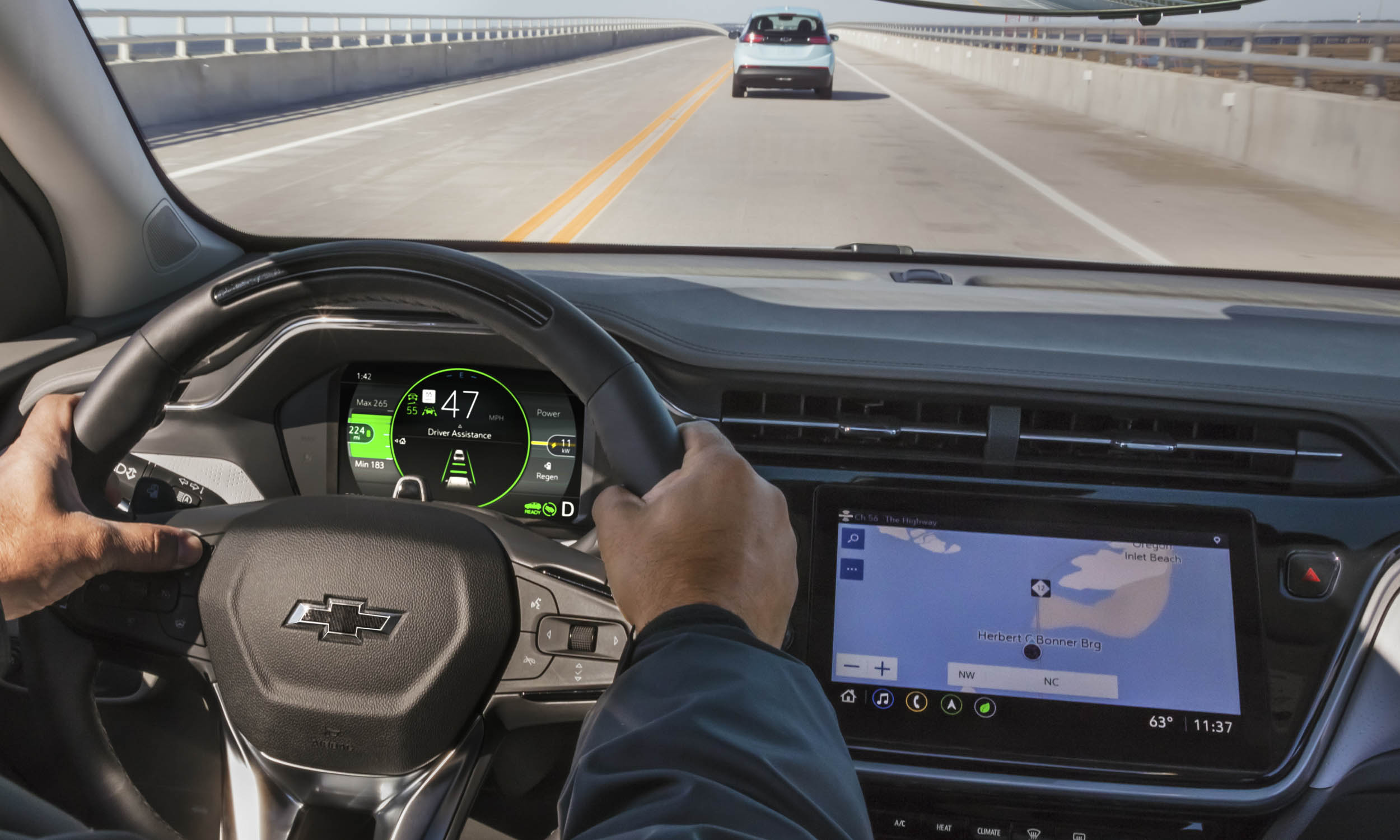 Super Cruise
The Bolt EUV was the first Chevrolet (and first EV) offered with Super Cruise — a proper hands-free driver-assist technology first introduced on the Cadillac lineup. Drivers can take advantage of Super Cruise on more than 200,000 miles of roads in North America, allowing Bolt EUV operation with both hands off the steering wheel. The system is simple to activate, similar to setting cruise control. An indicator light in the gauge cluster lets the driver know it’s ready. Once Super Cruise is activated, a bar at the top of the steering wheel turns green and the car drives itself. The feature turned out to be a little nerve wracking at first, but we got used to it quickly — a boon for a long road trip. 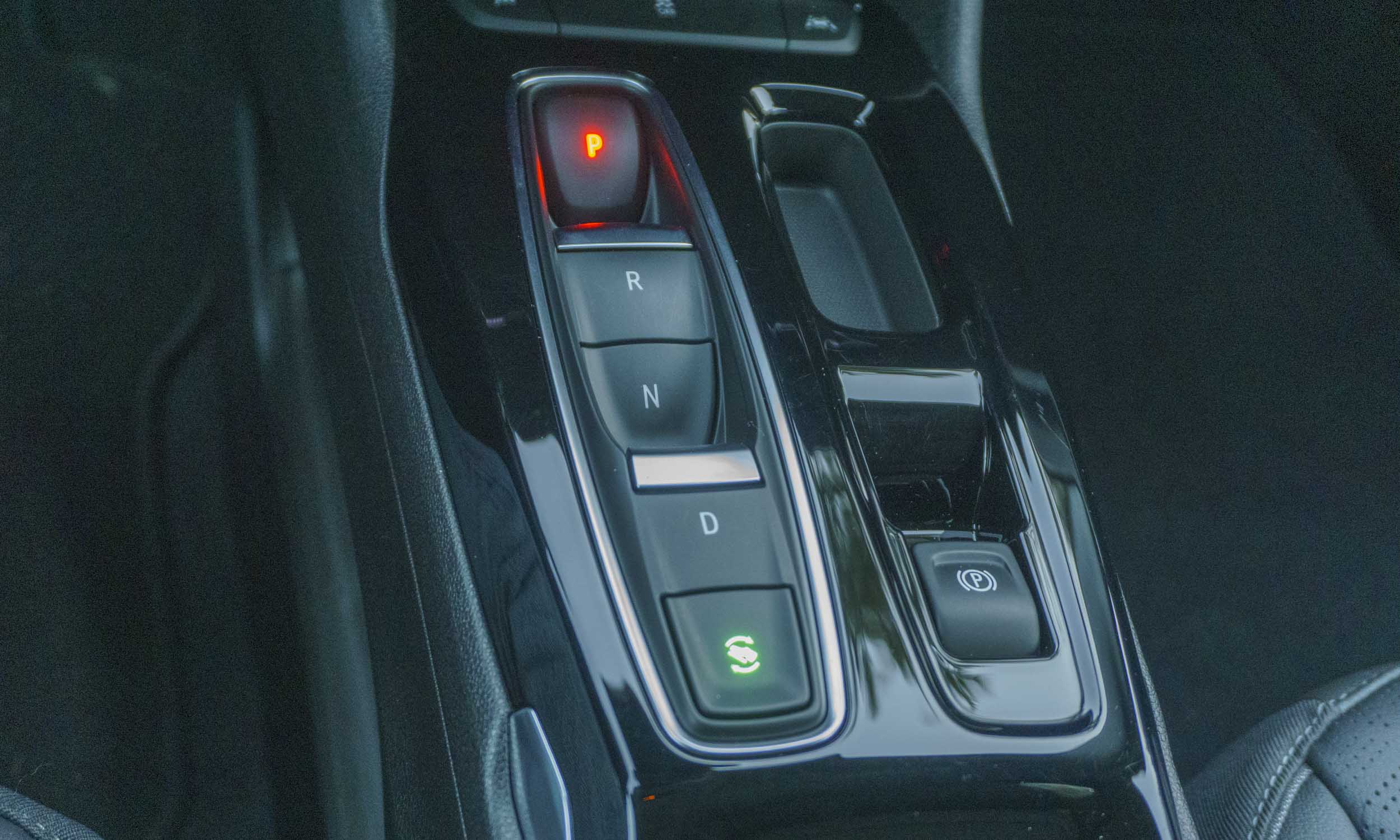 One-Pedal Driving
To maximize battery regeneration, the Bolt EUV offers one of our favorite EV features — one-pedal driving. Turned on via a button on the center console, one-pedal driving activates the regenerative braking by lifting off the throttle, making it possible to slow the 2023 Chevrolet Bolt EUV to a complete stop without touching the brake pedal. 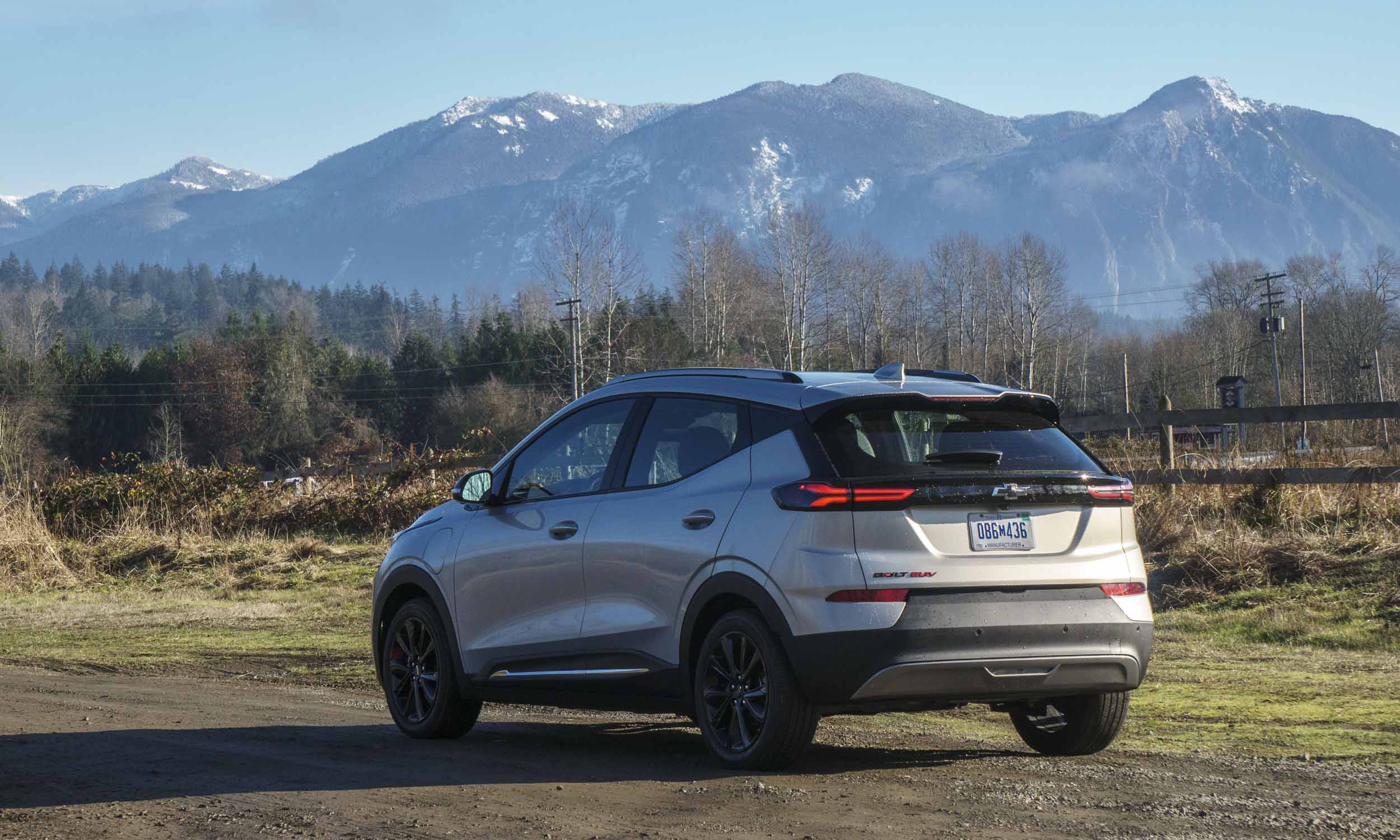 Rating: 8.5
With its relatively low starting price, the 2023 Chevrolet Bolt EUV is a great choice as a first electric vehicle. It delivers spritely performance and a driving range that should work well for most consumers. While faster charging from a DC fast charger would be nice, most owners will find a Level 2 charger sufficient most of the time. With a comfortable, roomy interior and a commendable level of utility, the Bolt EUV is an excellent option as an electric daily driver. 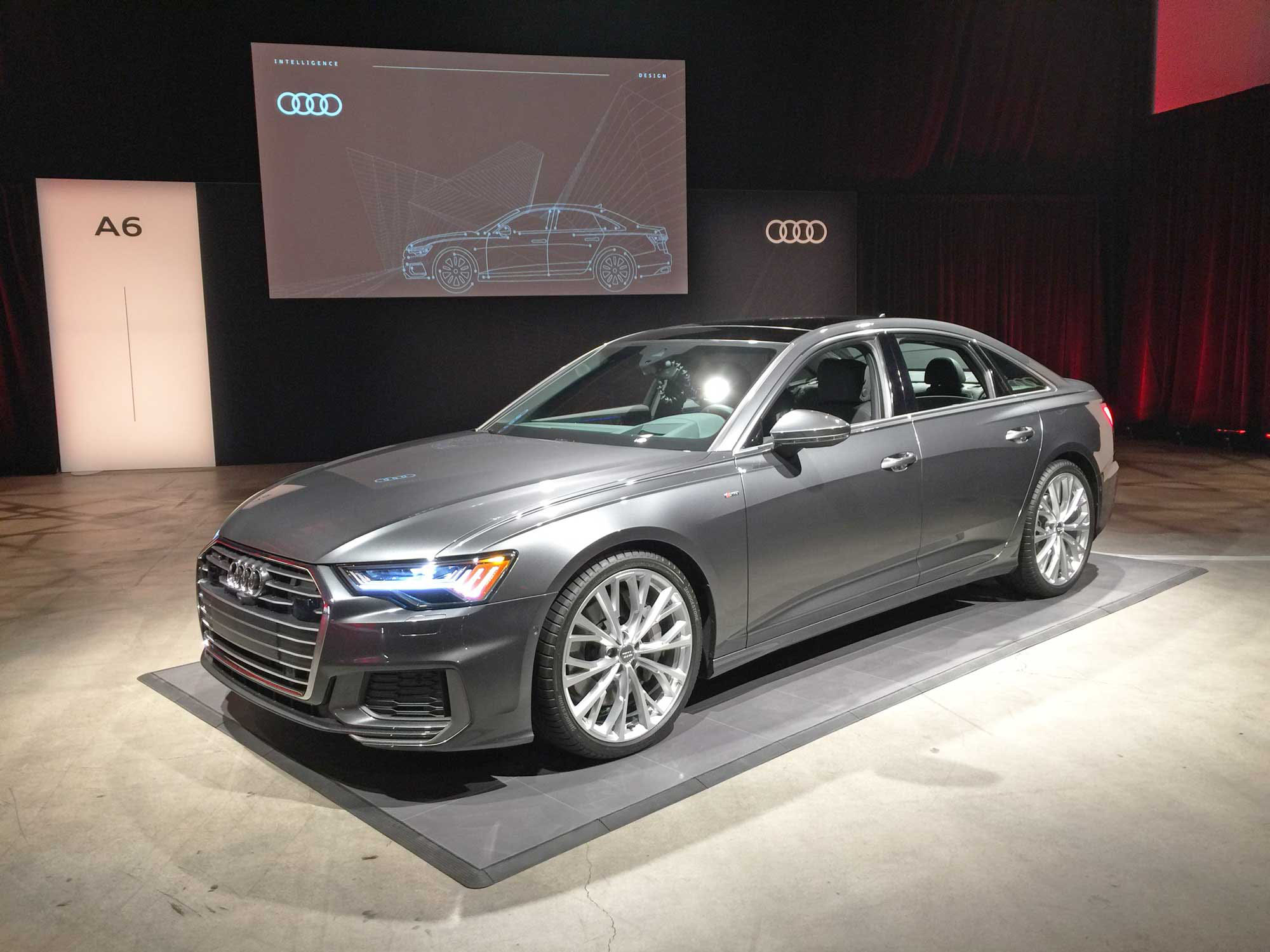 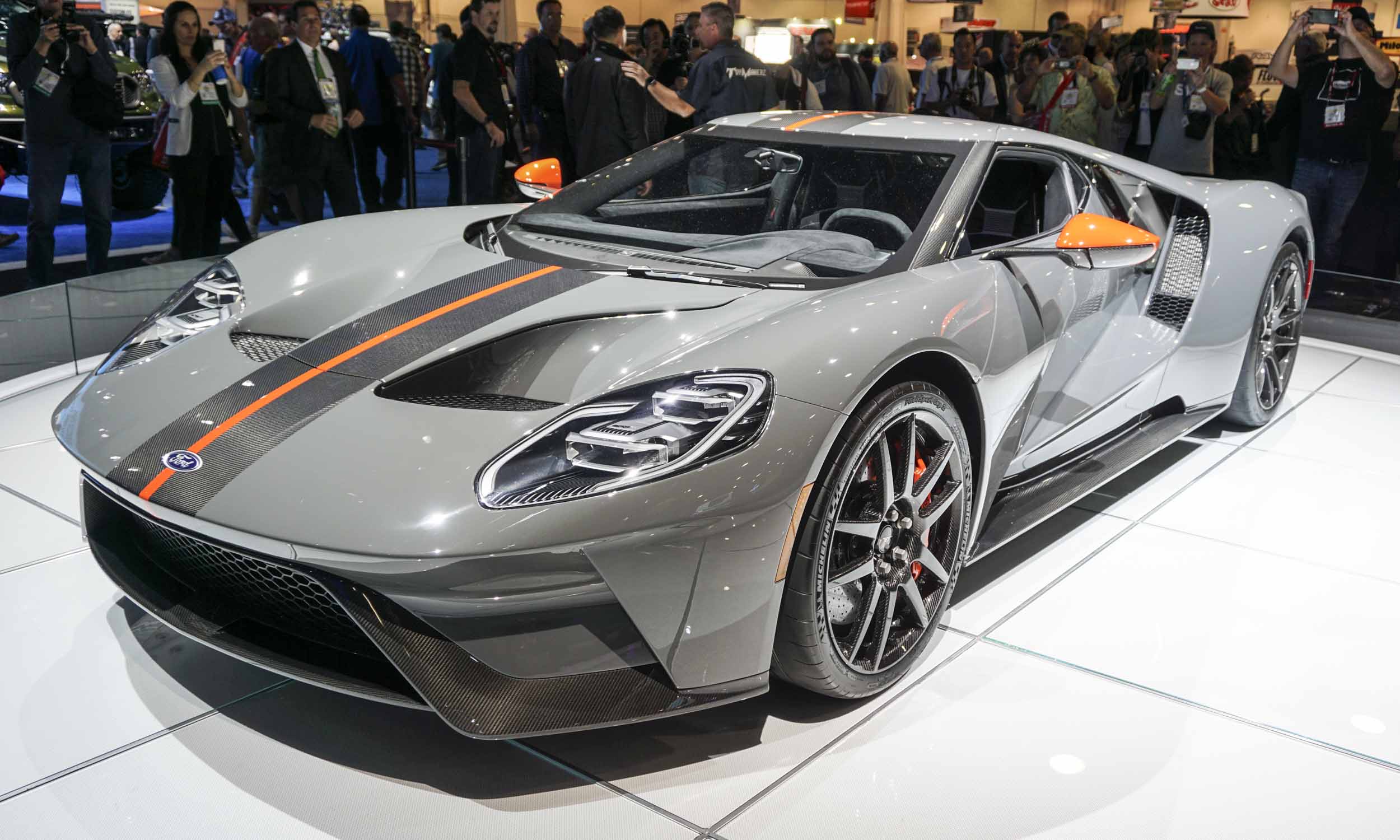