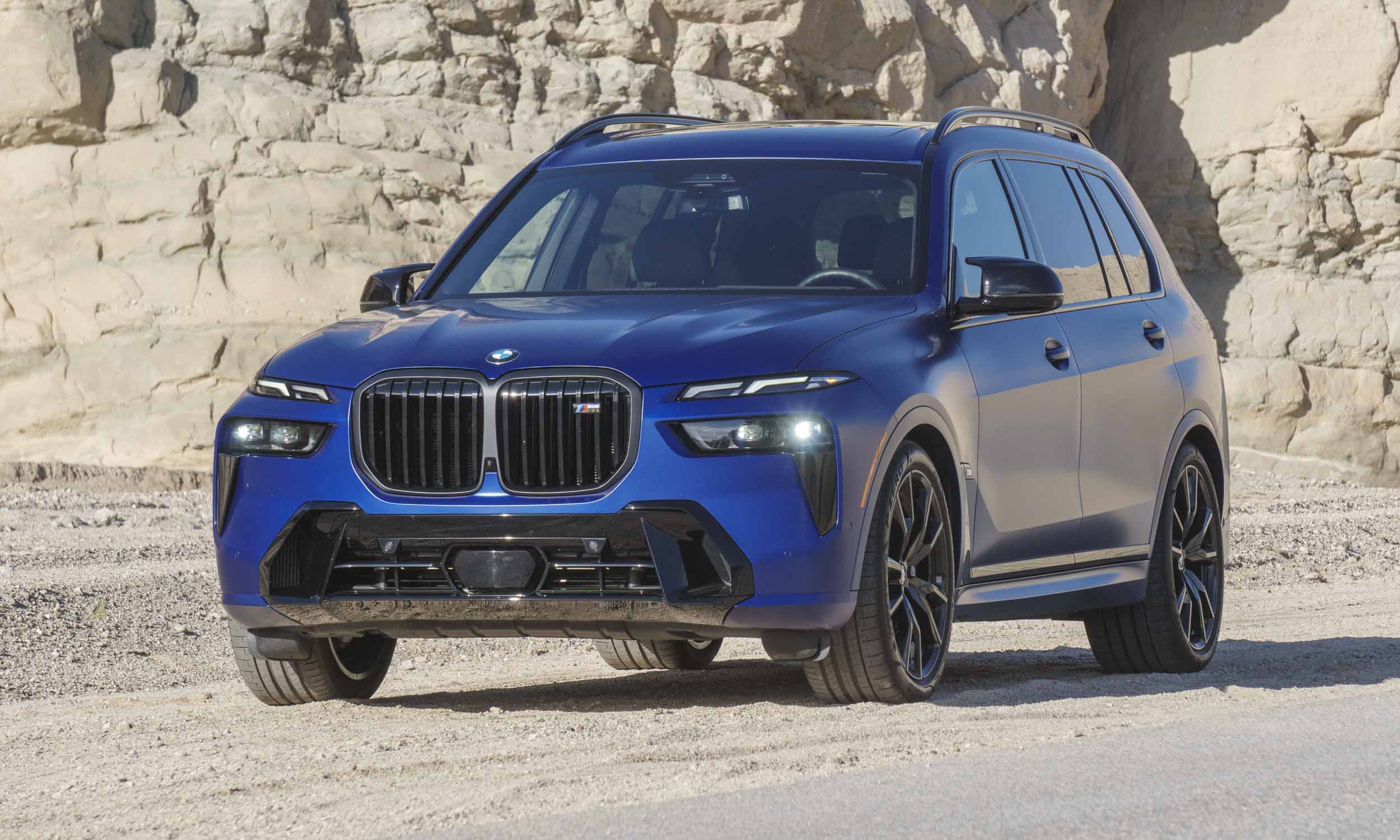 What Is It?
A few years ago, BMW premiered its first three-row SUV, the X7. The largest vehicle the German company offers, the X7 took its place as the flagship of the BMW SAV lineup (BMW refers to these vehicles as Sports Activity Vehicles), joining the X1, X3, X4, X5 and X6. The 2023 BMW X7 receives updated styling, additional performance and a new high-tech interior that help solidify this vehicle’s flagship status. Like its predecessor, the X7 will be produced at the BMW Group plant in Spartanburg, South Carolina. 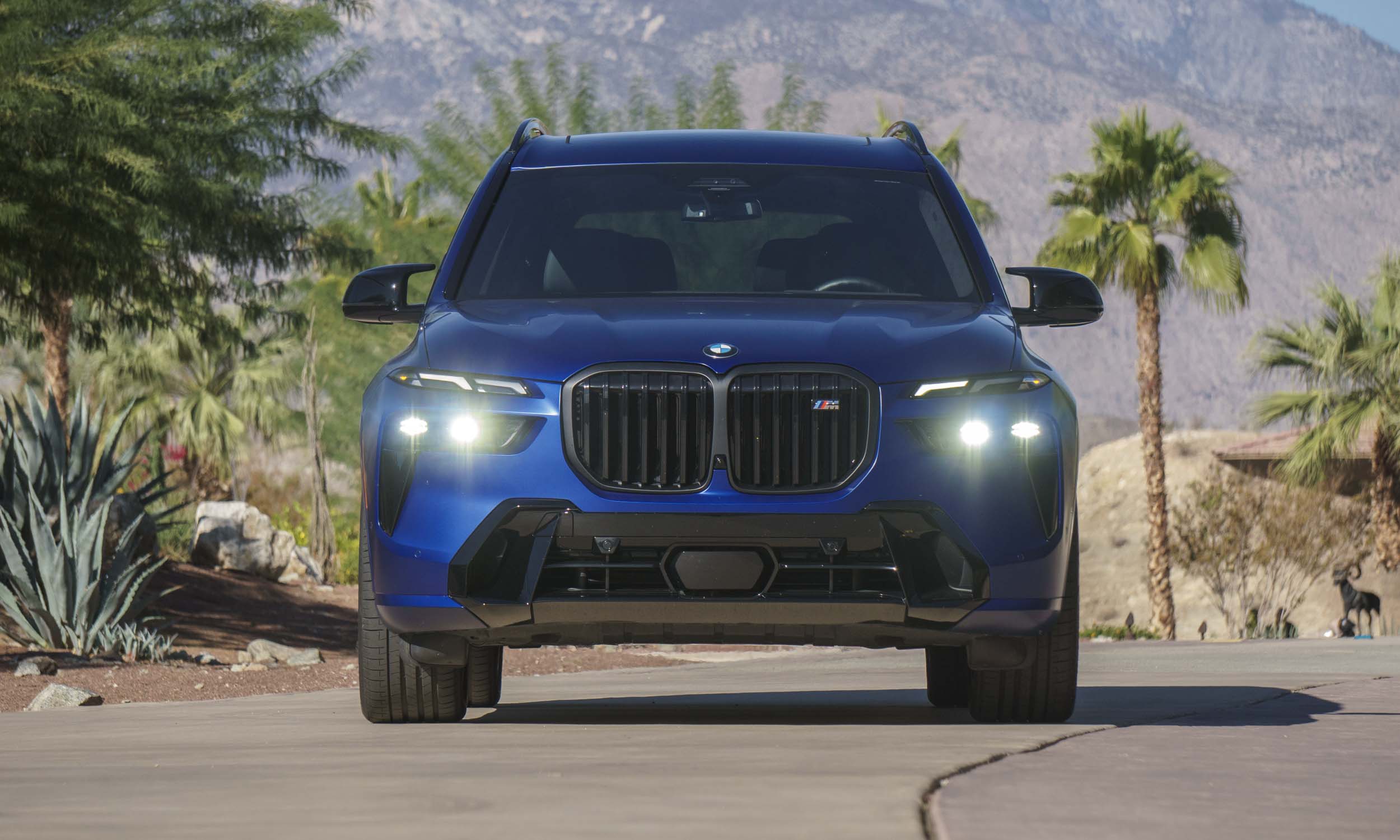 Flagship Styling
The 2023 BMW X7 takes many of its styling cues from the all-new 7 Series, also new this year. The prominent BMW kidney grille has been revised with new grille bars; the grille can now be illuminated for further emphasis. The more powerful X7 M60i has a more aggressive look with larger air intakes and an integrated M logo. A new headlight design splits the running lights and driving lights; the slim LED DRLs sit at the hoodline, while the headlights flank the grille, ensconced behind smoked lenses making them unnoticeable until switched on. The only downside to this new, sleek design: it immediately makes the rest of the X lineup look dated. 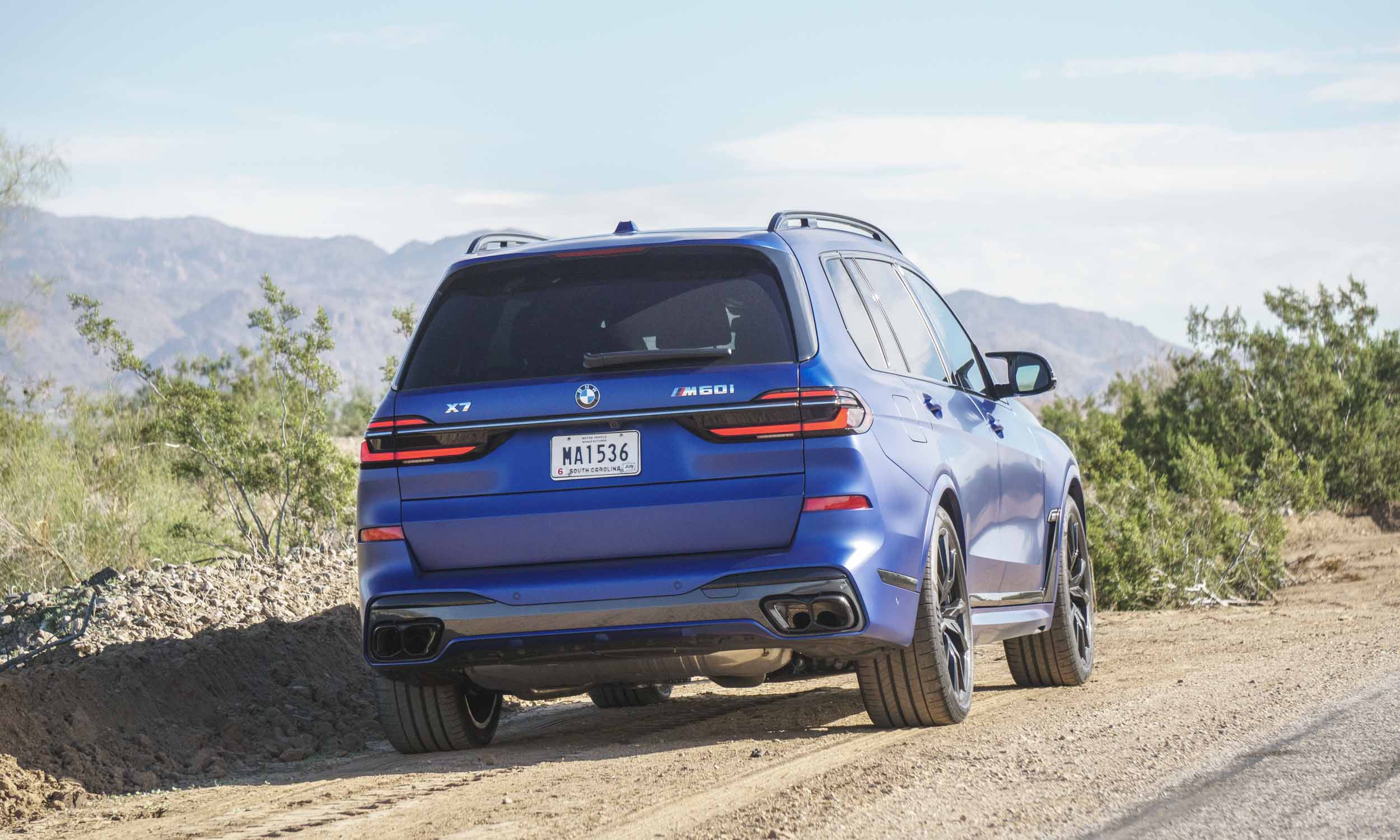 Rear View
Additional updates to the 2023 BMW X7 can be found at the rear of the vehicle, where the slim-design LED taillights wrap around the corners of the vehicle. The lights are connected visually by a narrow chrome strip that spans the tailgate. The rear bumper is also a redesign that now sports integrated exhaust outlets. 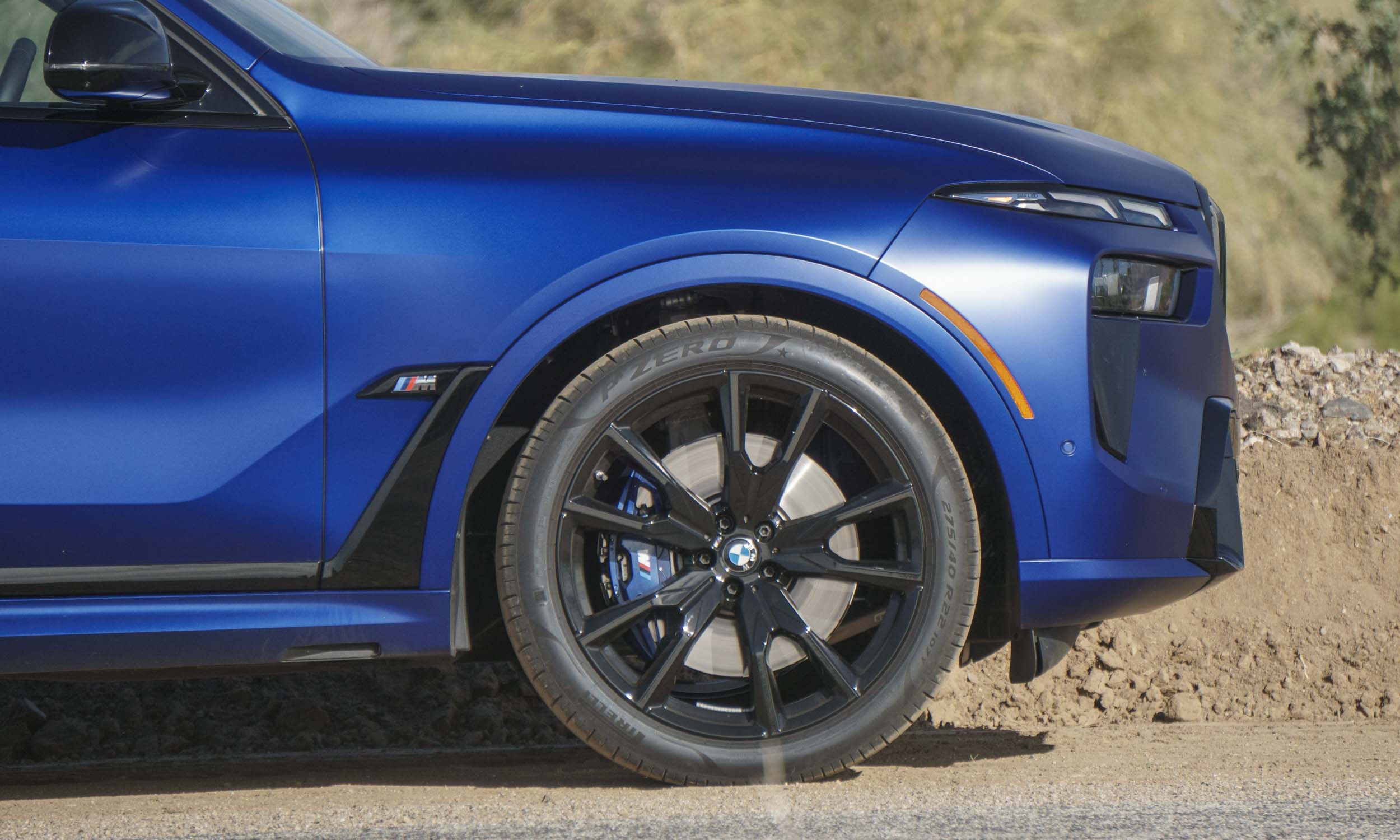 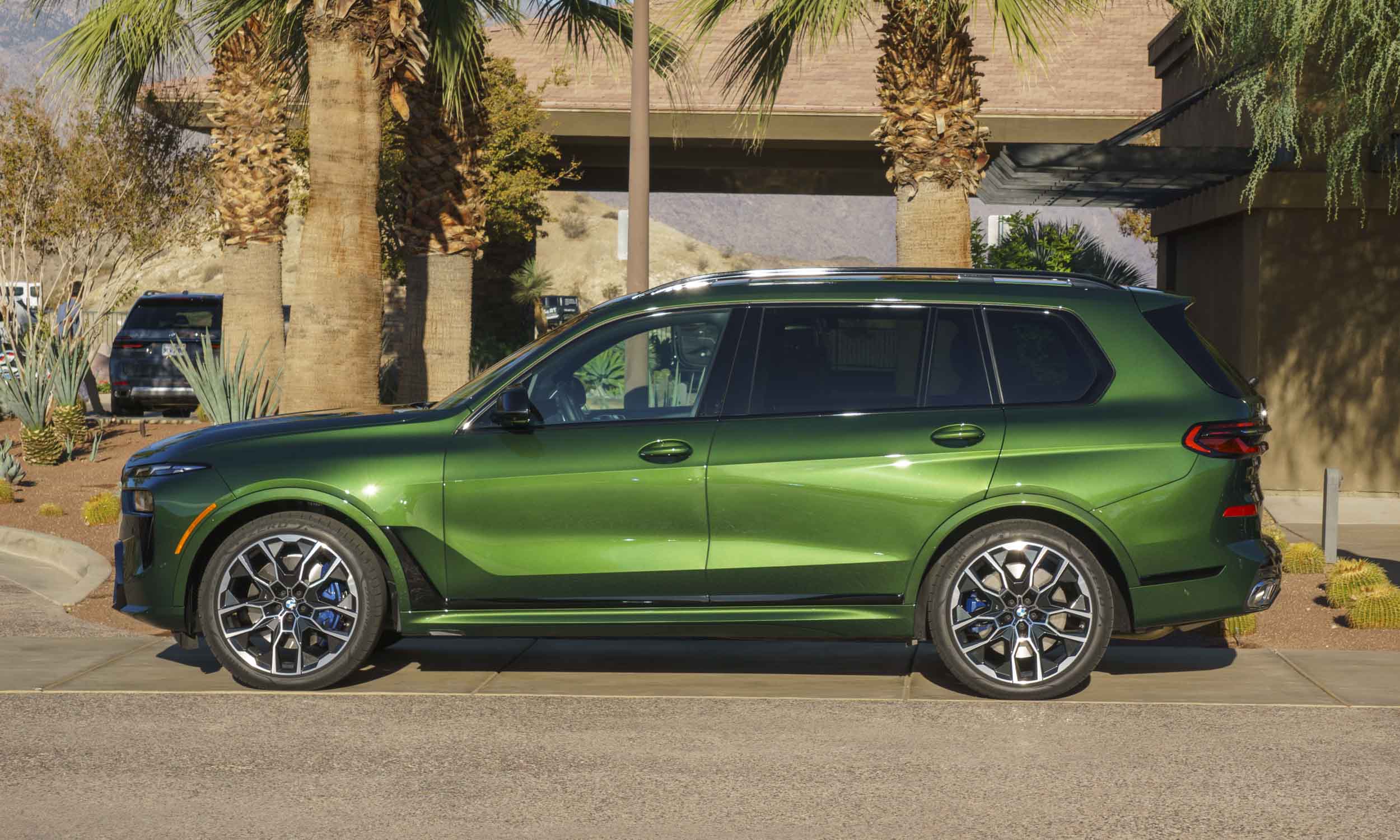 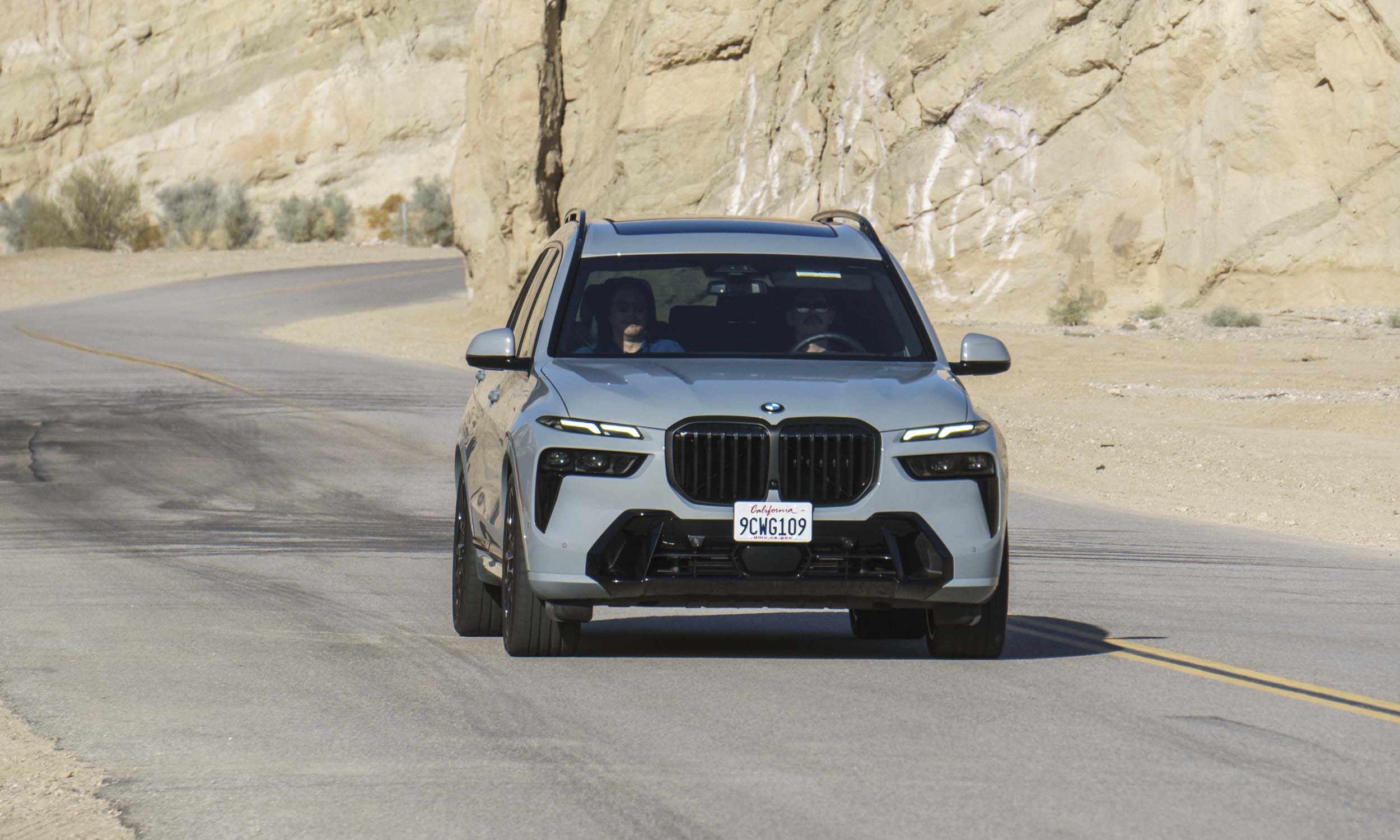 M Sport Package
The 2023 BMW X7 xDrive40i can be outfitted with an optional M Sport Package to give the vehicle an even more aggressive look. This gives the entry-level X7 M-Design front and rear aprons as well as side skirts with all exterior trim in gloss black, including the roof rails and window trim. The look gets underscored by double-spoke bi-color 21-inch M light alloy wheels. Inside is an M-specific leather steering wheel, stainless-steel M pedals, and M logos throughout the cabin. 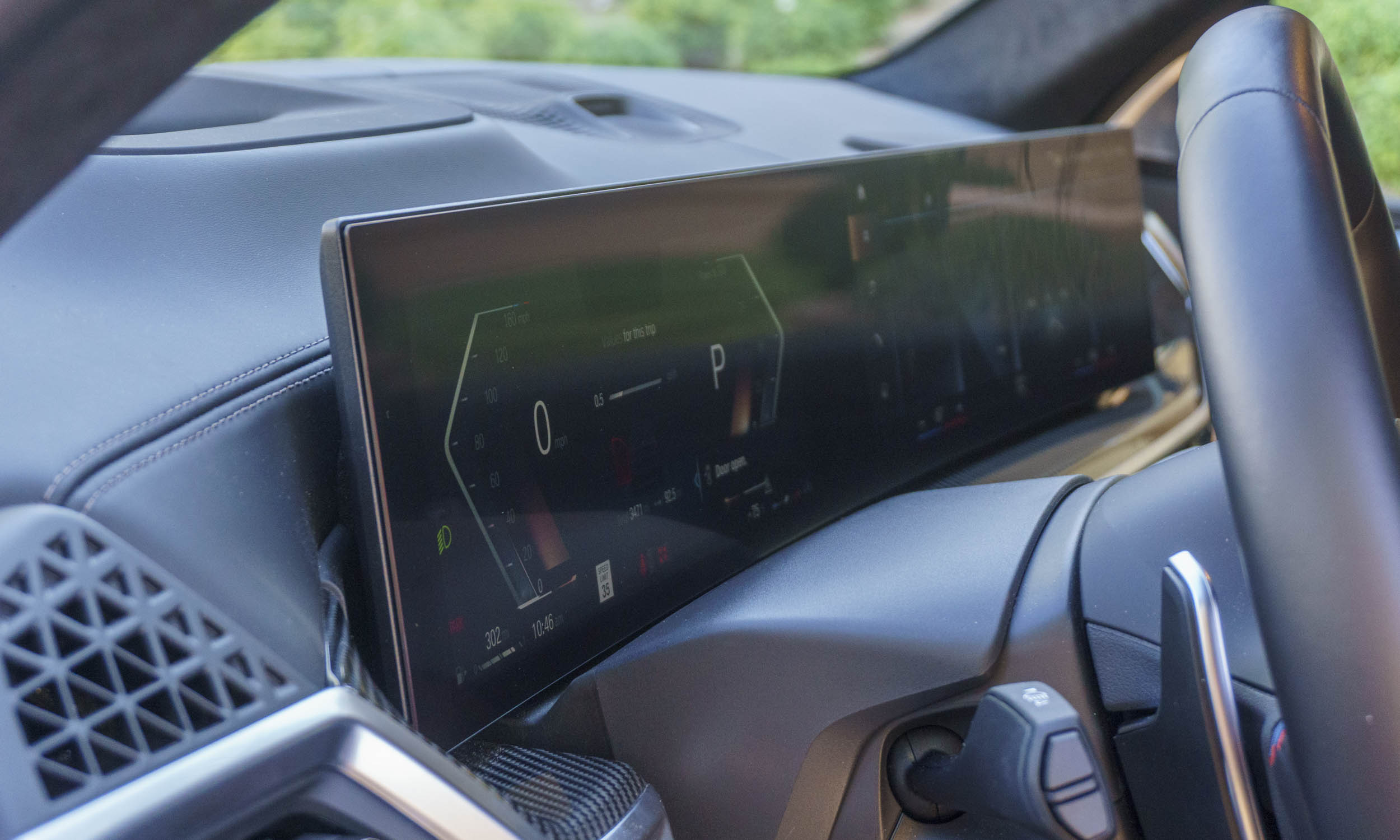 Inner Space
BMW introduced its curved display in the iX last year, and the new look is working its way through the lineup and now featured in the 2023 X7. With a 12.3-inch driver display and a 14.9-inch infotainment display, the two integrate behind a single glass surface. Thanks to a single surface anti-reflective coating, there’s no need for a shield over the screen, which gives the cockpit a more open feeling. The screen rests on a dashboard that can be trimmed in a range of materials including polished carbon fiber or open-pore wood. 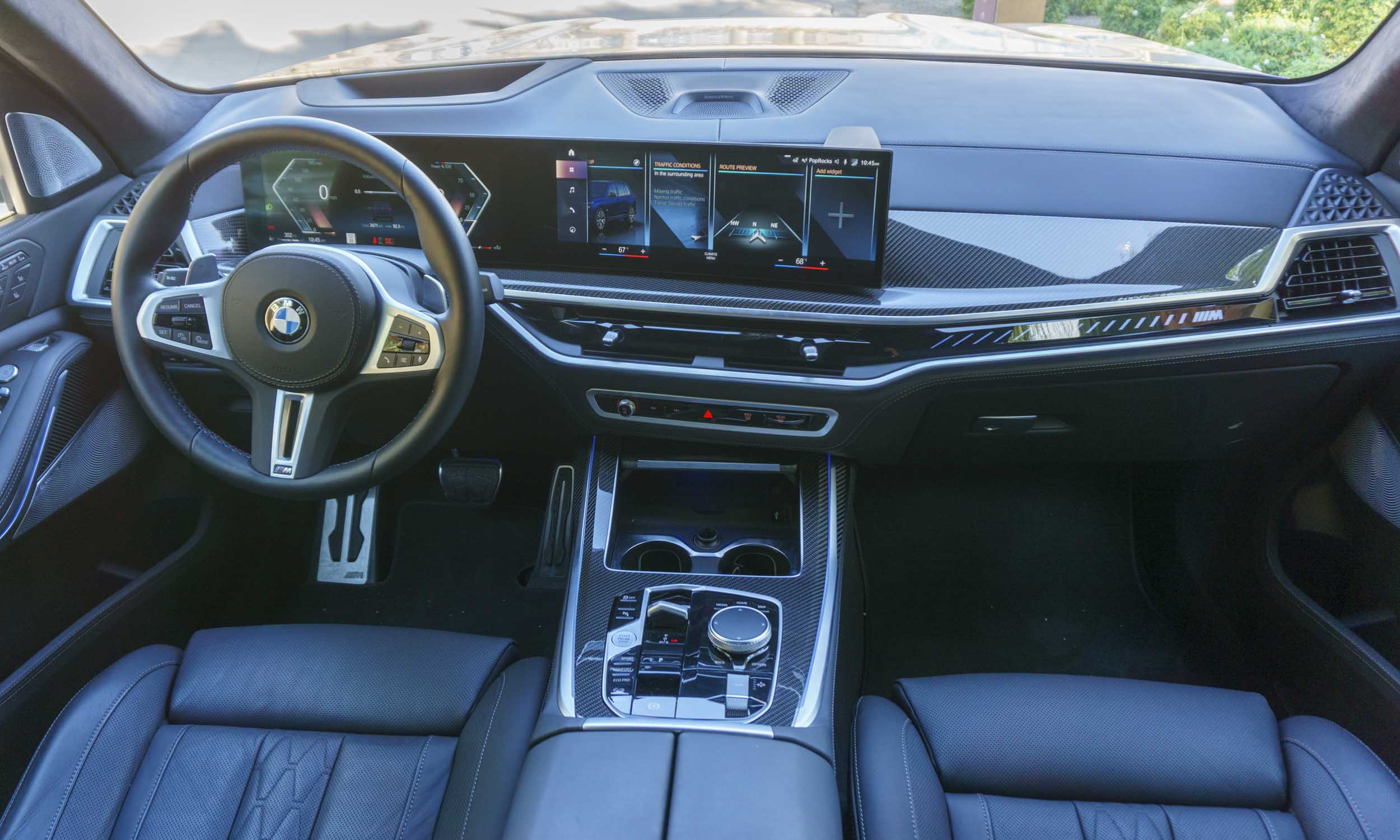 Latest Infotainment System
The 2023 BMW X7 is equipped with the latest version of iDrive — iDrive 8 —featuring the BMW Live Cockpit Plus which expands interaction with the infotainment and other vehicle systems. Access to the various controls is via the touchscreen, shortcut buttons on the center console, the iDrive dial, or by BMW’s sophisticated voice recognition system. The voice system is impressive. Activated via a button or by saying the phrase “Hey BMW,” the Intelligent Personal Assistant responds to natural language queries and can take care of many tasks that would require the driver to otherwise take attention away from the road. 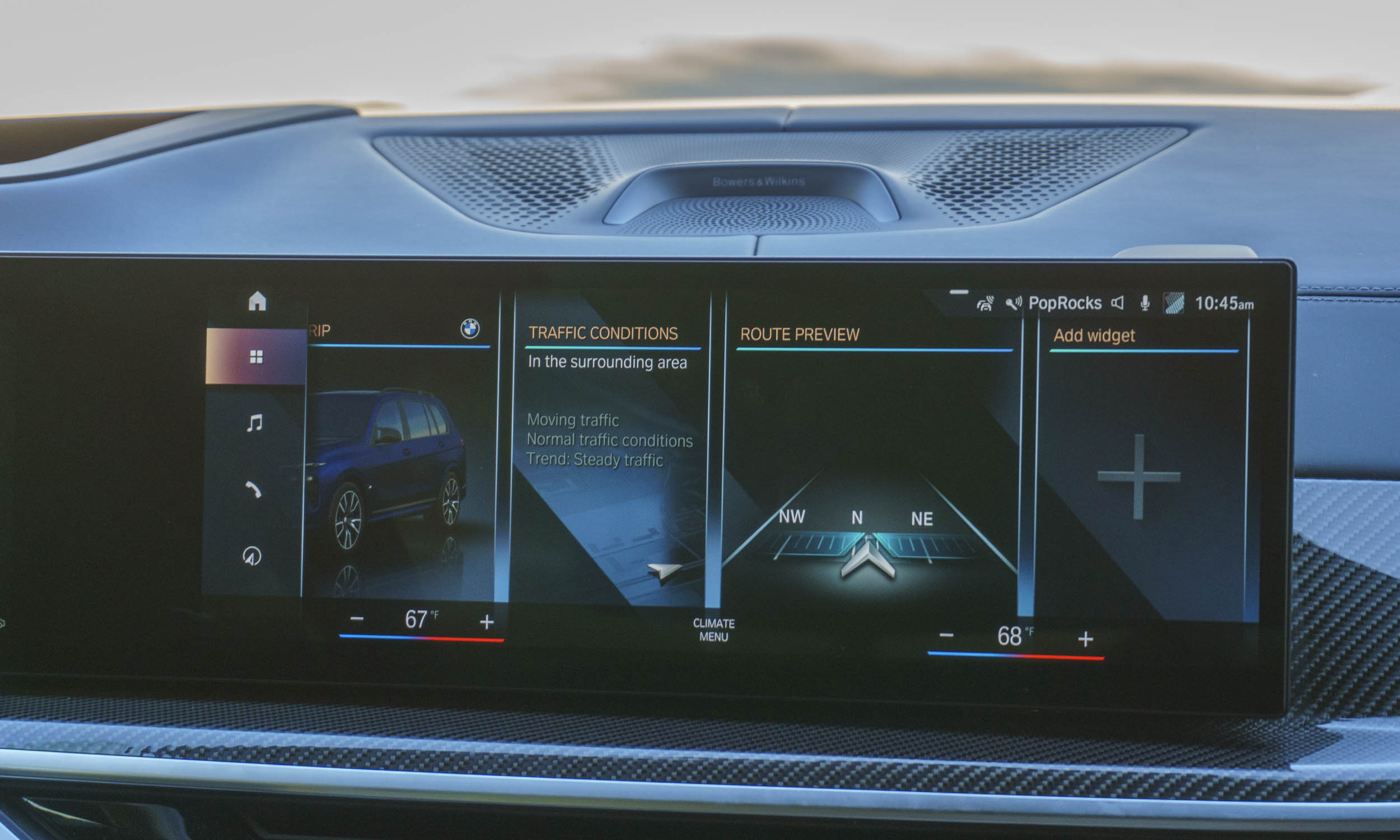 Personal Assistant
During our testing, without taking hands off the wheel the BMW Intelligent Personal Assistant was able to set the navigation destination, change the radio station, adjust the temperature and fan settings, as well as turn on the seat massager — all via voice commands. The Personal Assistant can also raise or lower the windows — cool, but also no easier than simply using buttons on the door. 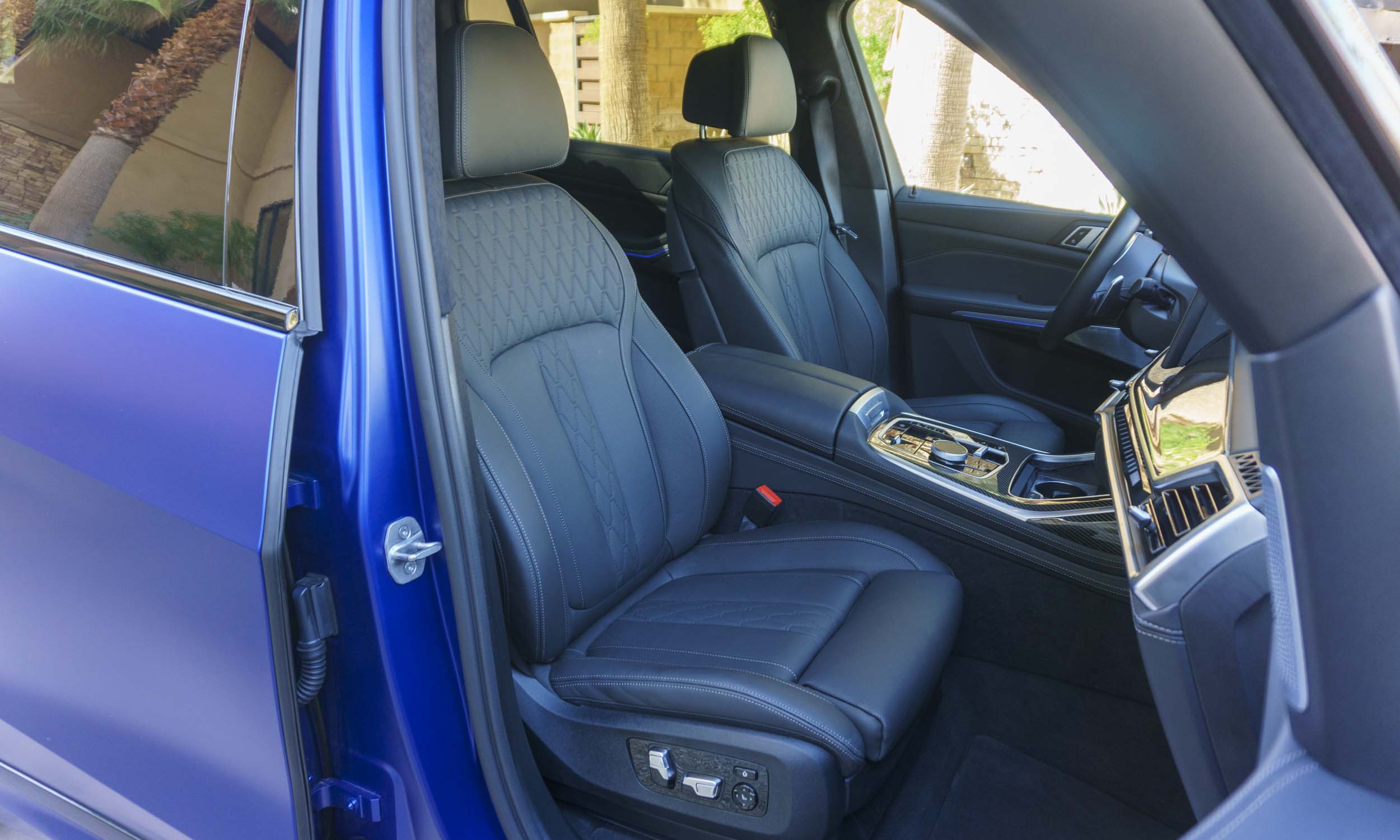 Front Seats
We spent most of our time in a fully loaded 2023 BMW X7 M60i, which had seats trimmed in soft Full Merino leather. The X7’s seats offer commendable support with nice side and thigh bolsters. In addition, seats can be heated or ventilated, and they have multiple massage programs. 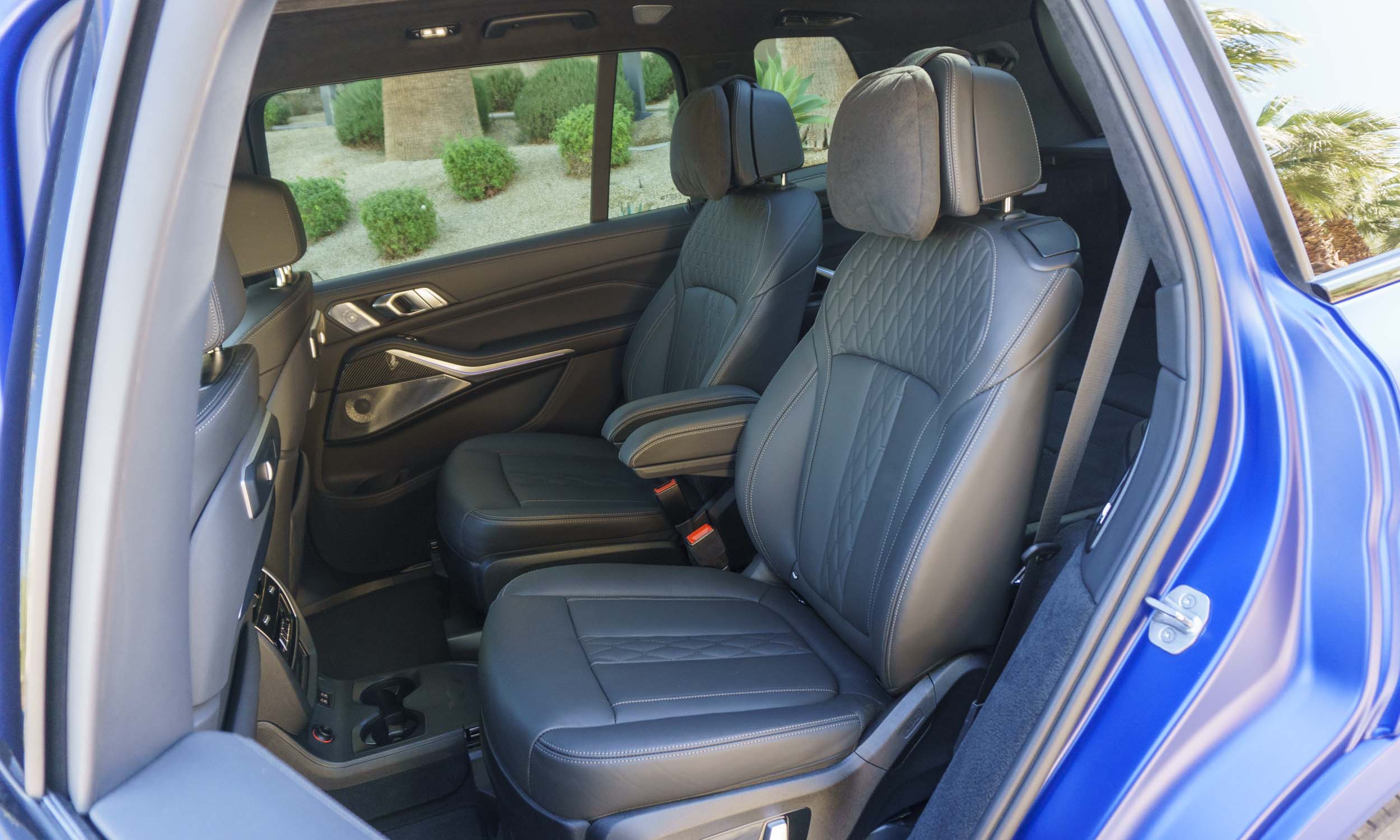 Rear Seats
BMW offers the X7 with a bench seat or captain’s chairs in the second row — the vehicle we drove was fitted with the latter. The captain’s chairs are power-adjustable with heating functionality and also feature pillowlike head restraints. Two large cupholders sit between the seats, and each passenger can adjust their own climate controls. Dual USB-C ports keep devices powered. 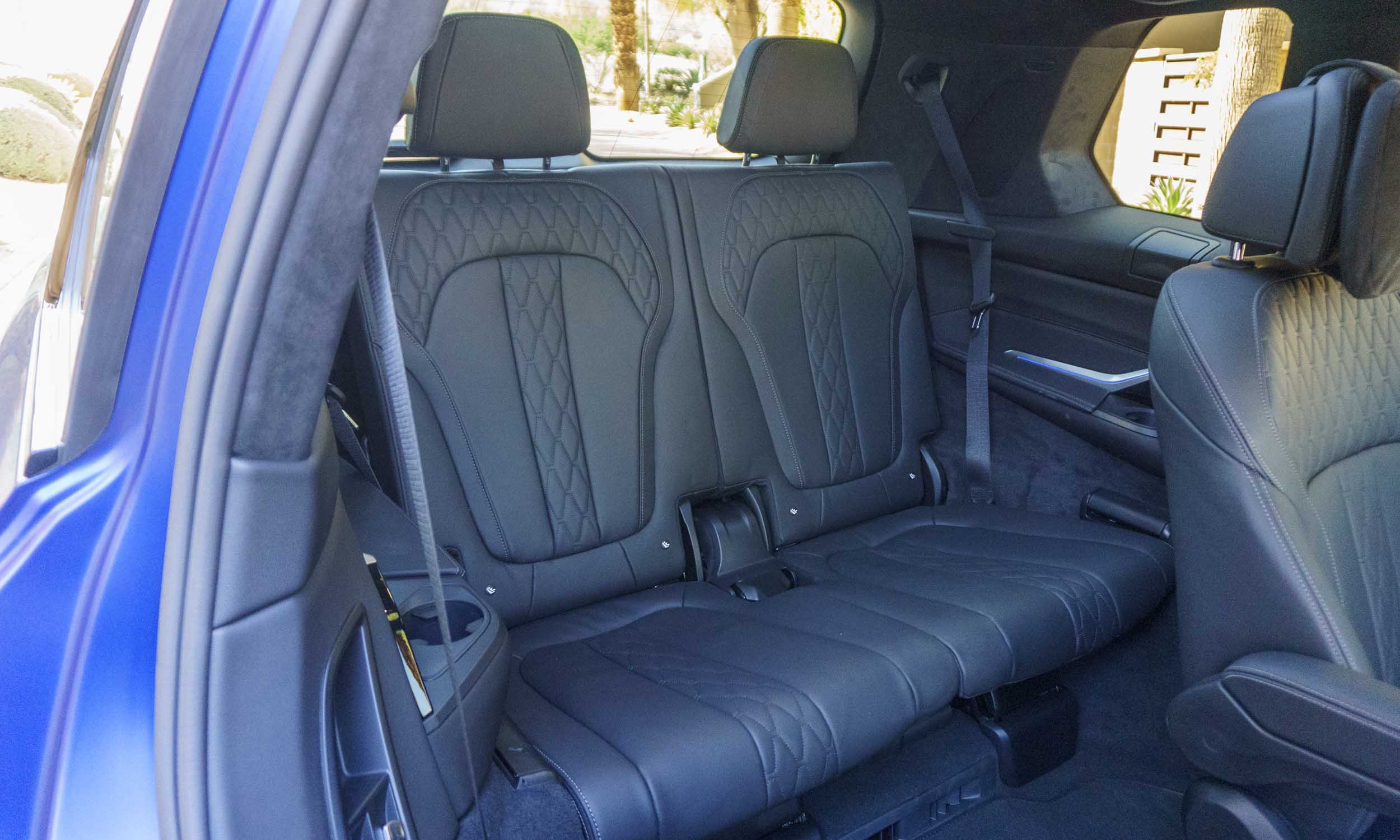 Third Row
The third row in the 2023 BMW X7 is surprisingly roomy and comfortable, accommodating two adults without issue. Second-row seats can slide forward to provide a bit more legroom; they also fold out of the way with the push of a button for relatively easy access to the third row. 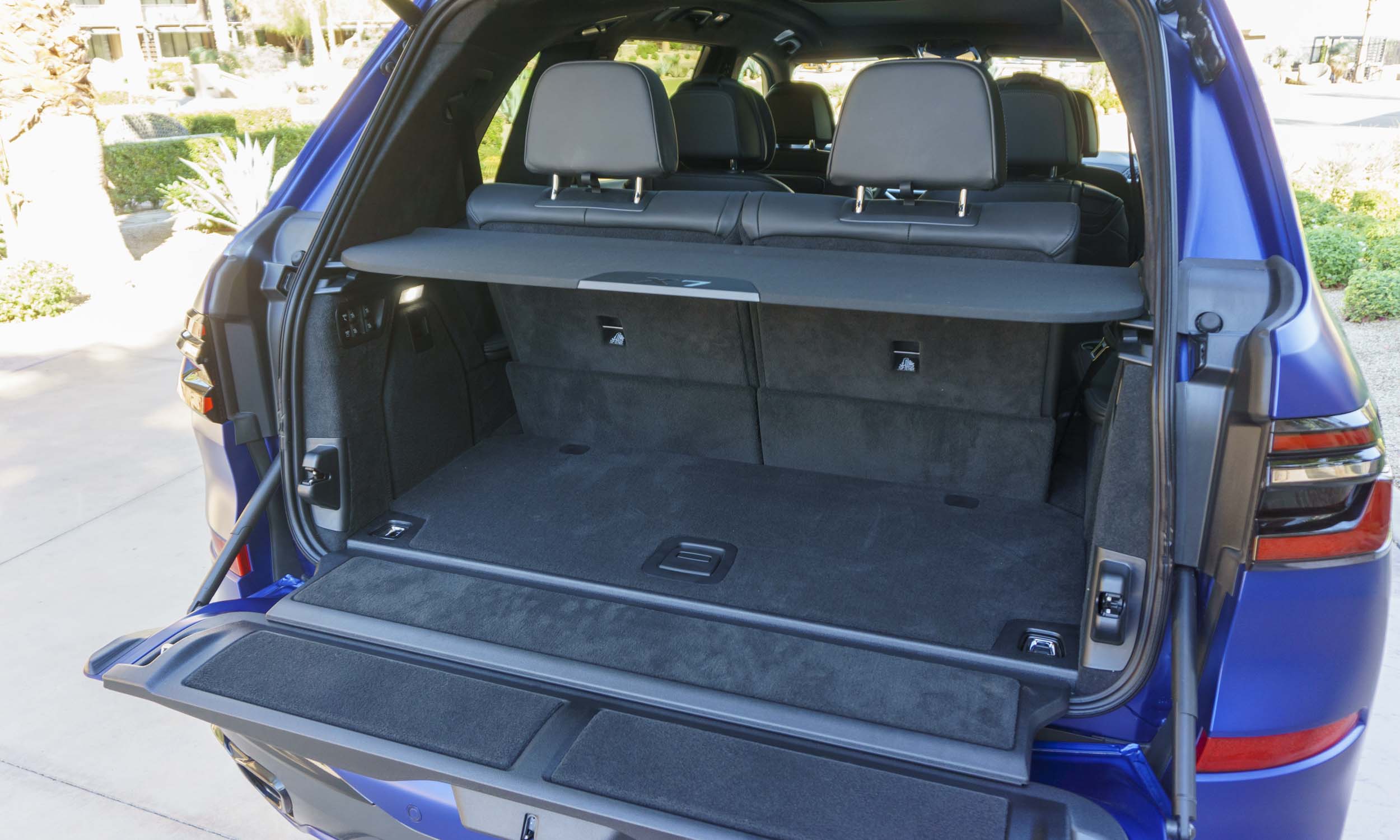 Cargo Space
As the largest vehicle in the BMW lineup, the X7 offers plenty of utility with a decent amount of cargo space behind the third row. Rear seats can be folded flat (or raised again) via buttons in the cargo area to provide room for larger items. The rear hatch features a small tailgate that makes loading gear a bit easier. Pushing the close button on the hatch will close both the tailgate and hatch. 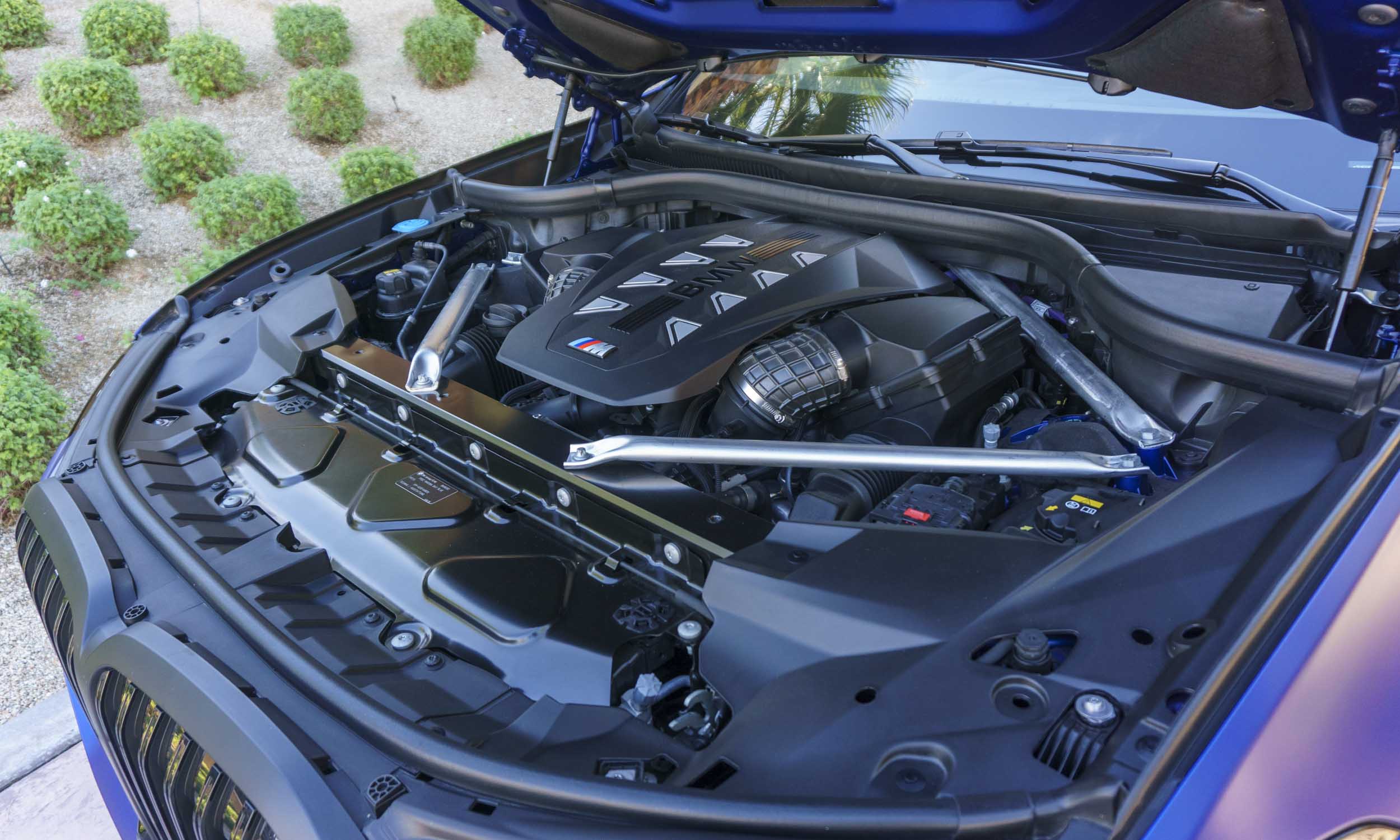 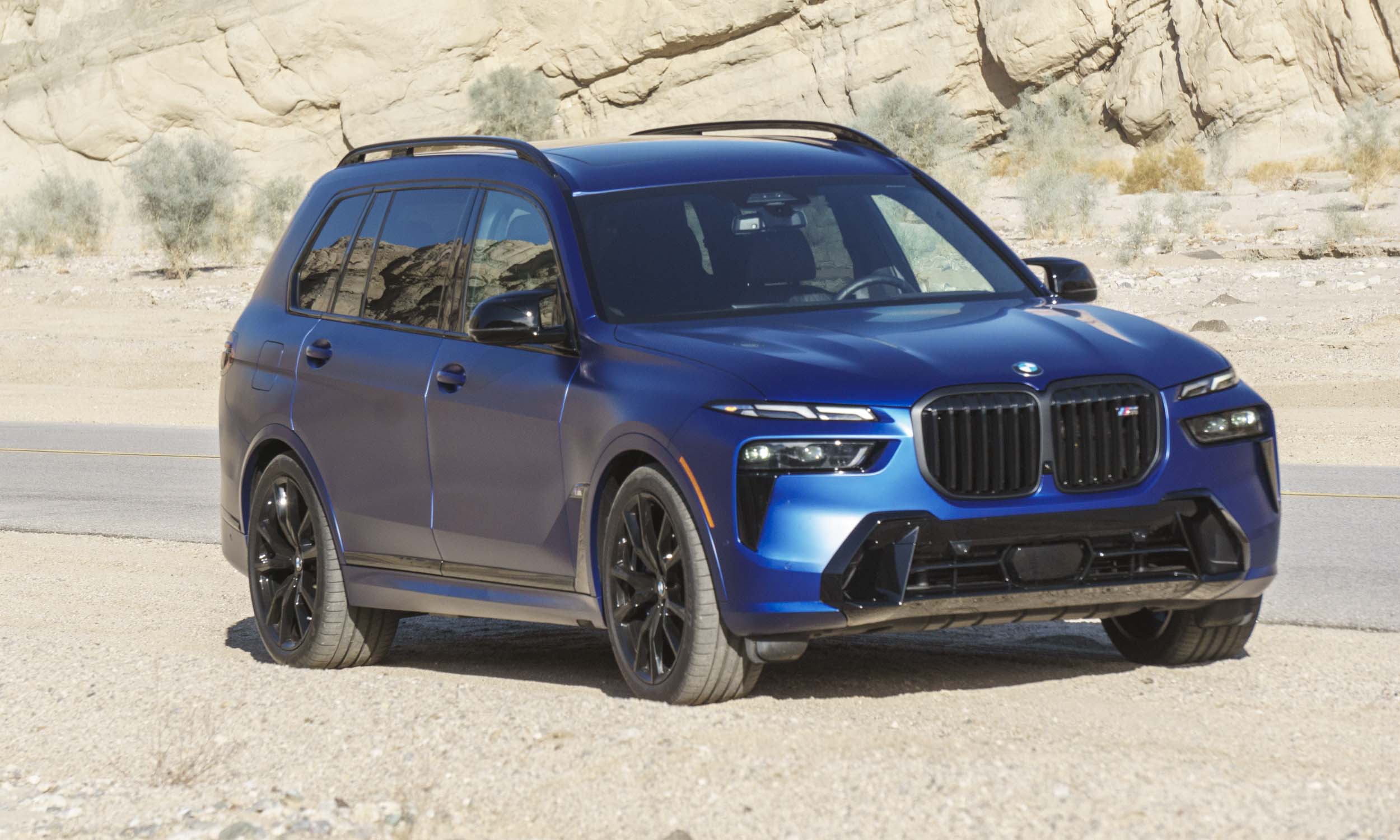 Mild Hybrid
Both available engines of the 2023 BMW X7 feature a 48-volt mild hybrid system that integrates a starter generator into the transmission. This setup optimizes throttle response for smoother launches — especially with the Auto Start Stop function, and increases the overall efficiency of the powertrain. 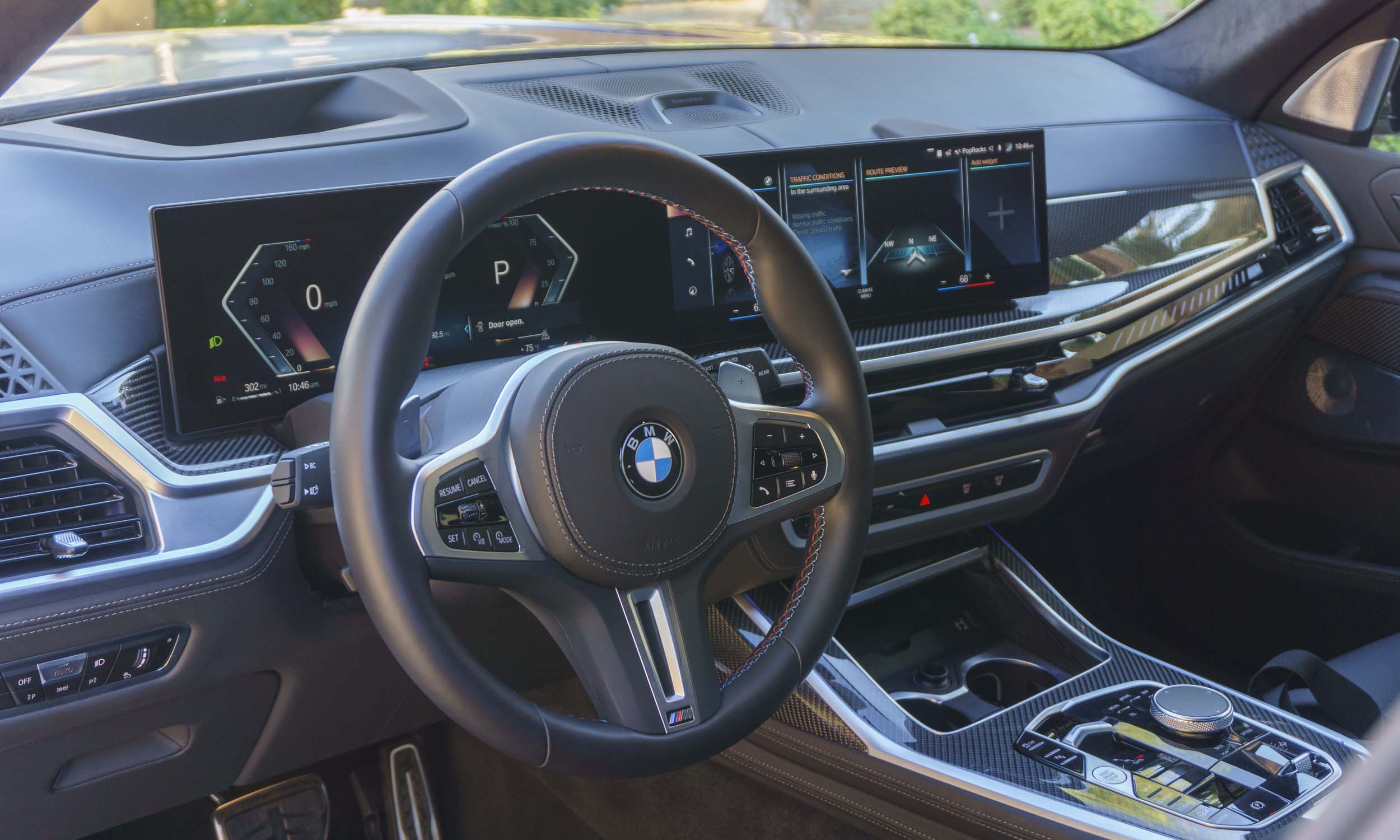 Sprint Function
When driving situations require a quick burst of speed, the driver can activate the Sprint function. Pulling on the left-hand paddle for at least one second, the X7 will shift into the lowest gear possible based on the vehicle’s speed and switch every system to the sportiest setting, including activating the hybrid system’s electric boost. 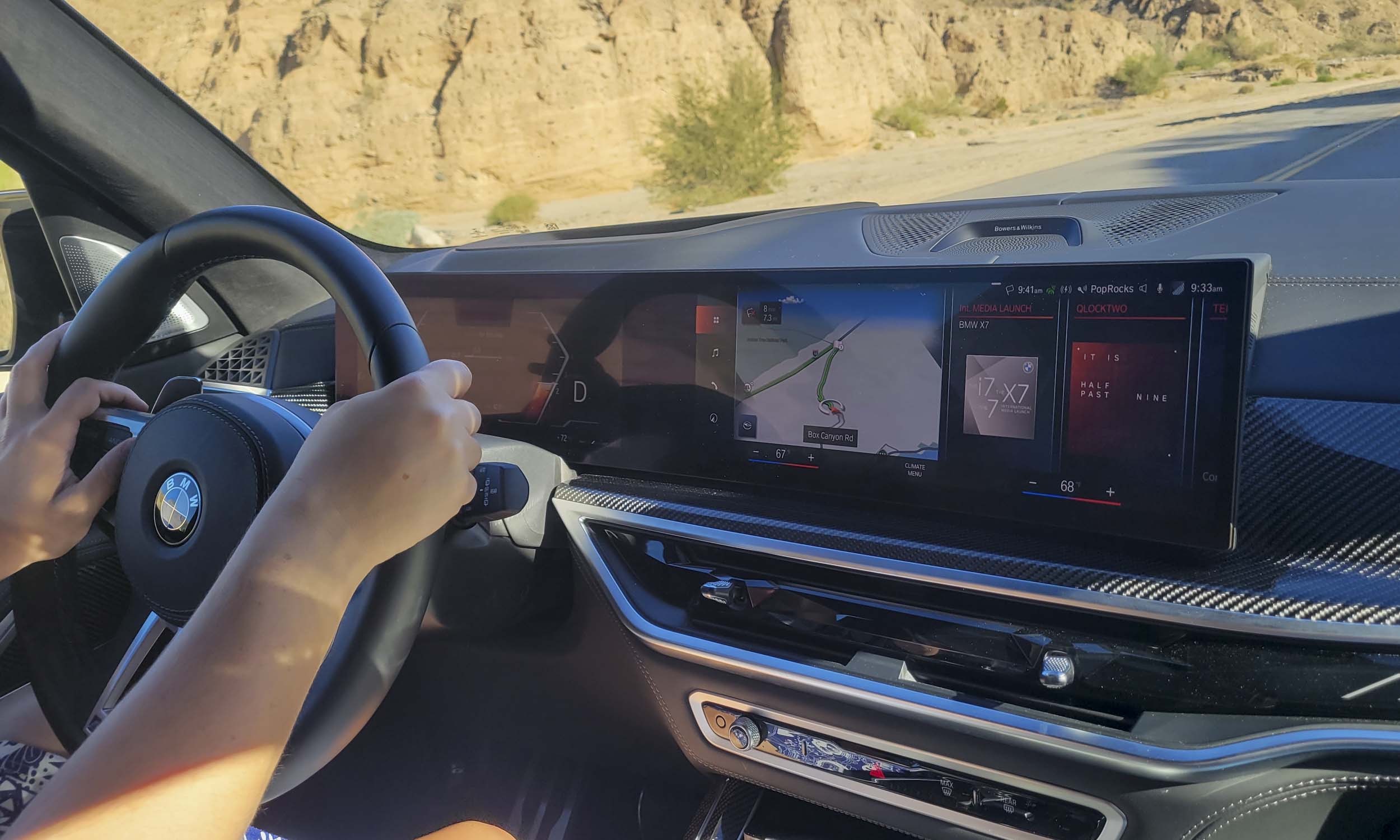 On the Road
BMW invited us to Palm Springs, California, to experience the updated X7 firsthand, where we spent considerable time in the V8-powered X7 M60i. We were first impressed by the high-tech feeling of the interior thanks to the aforementioned large, curved dash screen with minimal physical buttons. This minimalist vibe gives the X7 a futuristic feeling. With seat coolers engaged to combat the Palm Springs heat, and with seat massagers simultaneously loosening sore muscles, we headed east toward Mecca, which is south of Joshua Tree National Park. 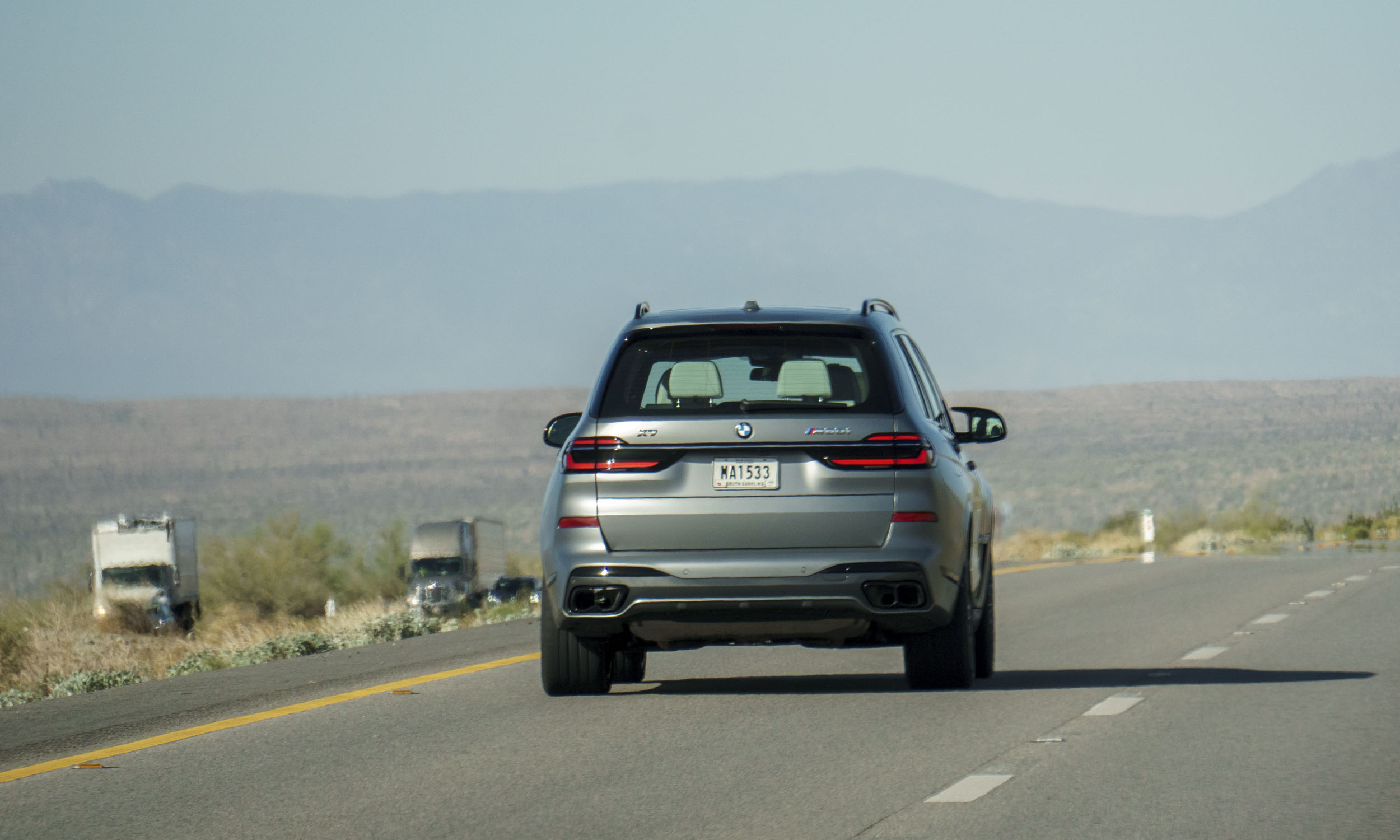 Highway Cruiser
As we cruised the highway at 80 mph with ease, we reflected on the X7’s role as the 7 Series of SUVs (sorry, SAVs). The ride is quiet and smooth, thanks in part to the vehicle’s standard air suspension. With plenty of power on tap, the X7 can easily cruise at a much higher speeds; we wisely avoided pushing the X7 too hard, keeping near to posted limits. 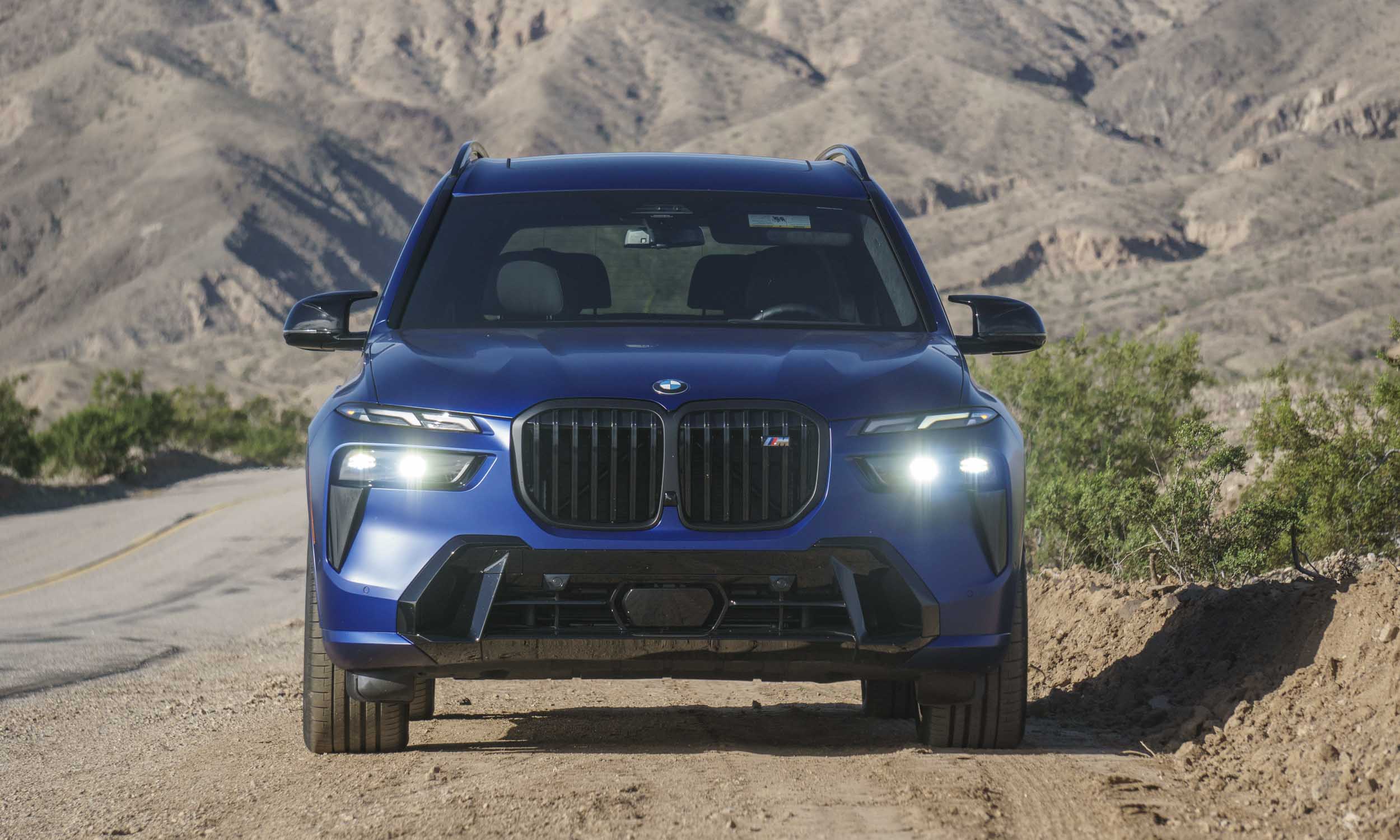 BMW Handling
The X7 may be the largest model BMW offers, but its size belies its fun driving characteristics. With its big high-performance tires, all-wheel drive and active roll stabilization, the X7 can easily be driven hard into corners and it remains composed and planted. The large brakes are certainly up to the task of slowing the X7 and it’s nearly three-ton weight as it dives into a corner, and it possesses plenty of torque to blast out the other end, accompanied by the wonderful audible of a BMW V8 engine. We wouldn’t claim the X7 drives like a sports car, although the vehicle’s performance is certainly impressive for a three-row SUV. 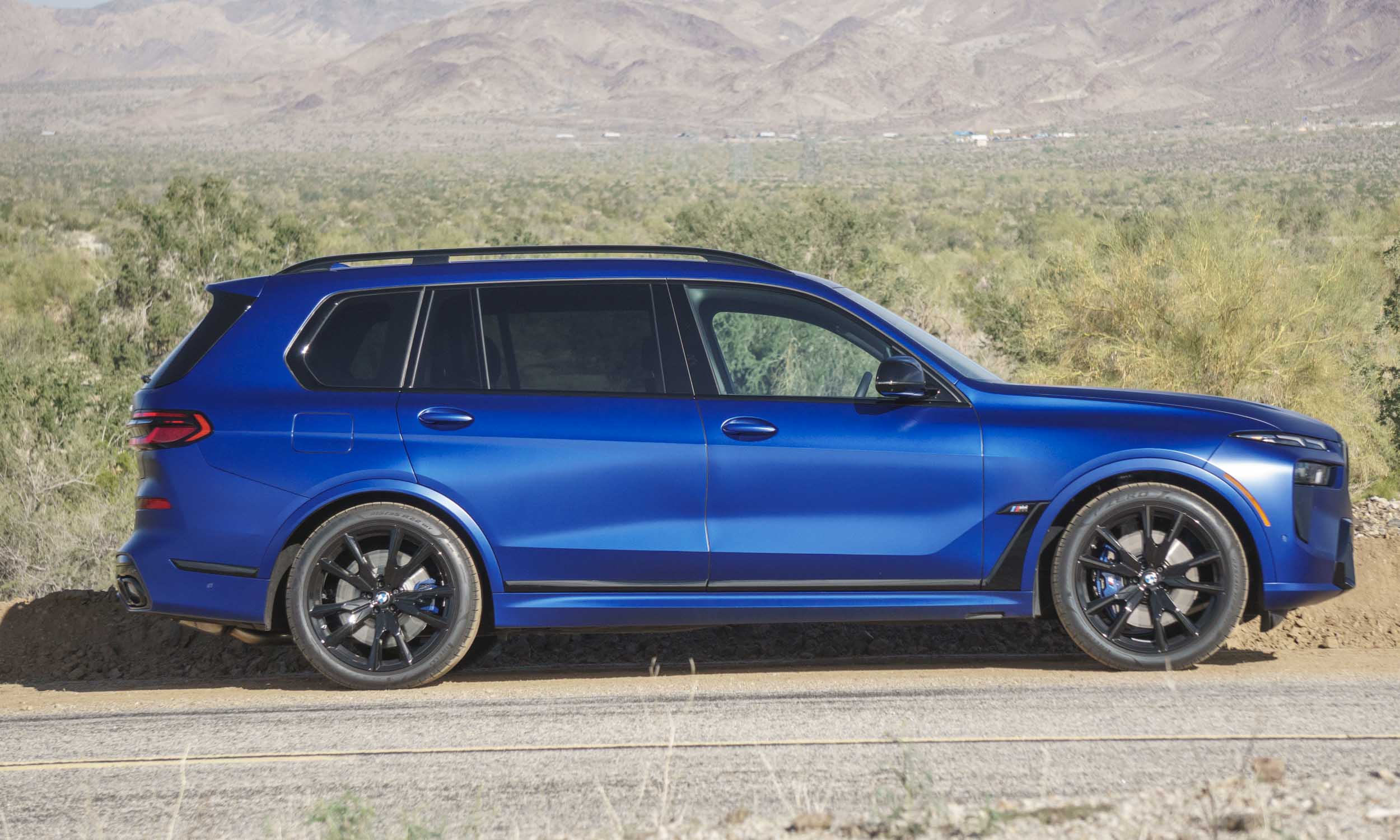 Right for You?
The 2023 BMW X7 is one of a few three-row SUVs that bring high levels of luxury and performance to the road. For drivers who seek all the amenities of a luxury sedan, the latest in high-tech infotainment, advanced driver-assistance features and the utility of an SUV, the X7 checks all the boxes. Add in the new modern looks and the performance expected of a BMW and the X7 becomes a must-drive for those in the market for a three-row luxury SUV. 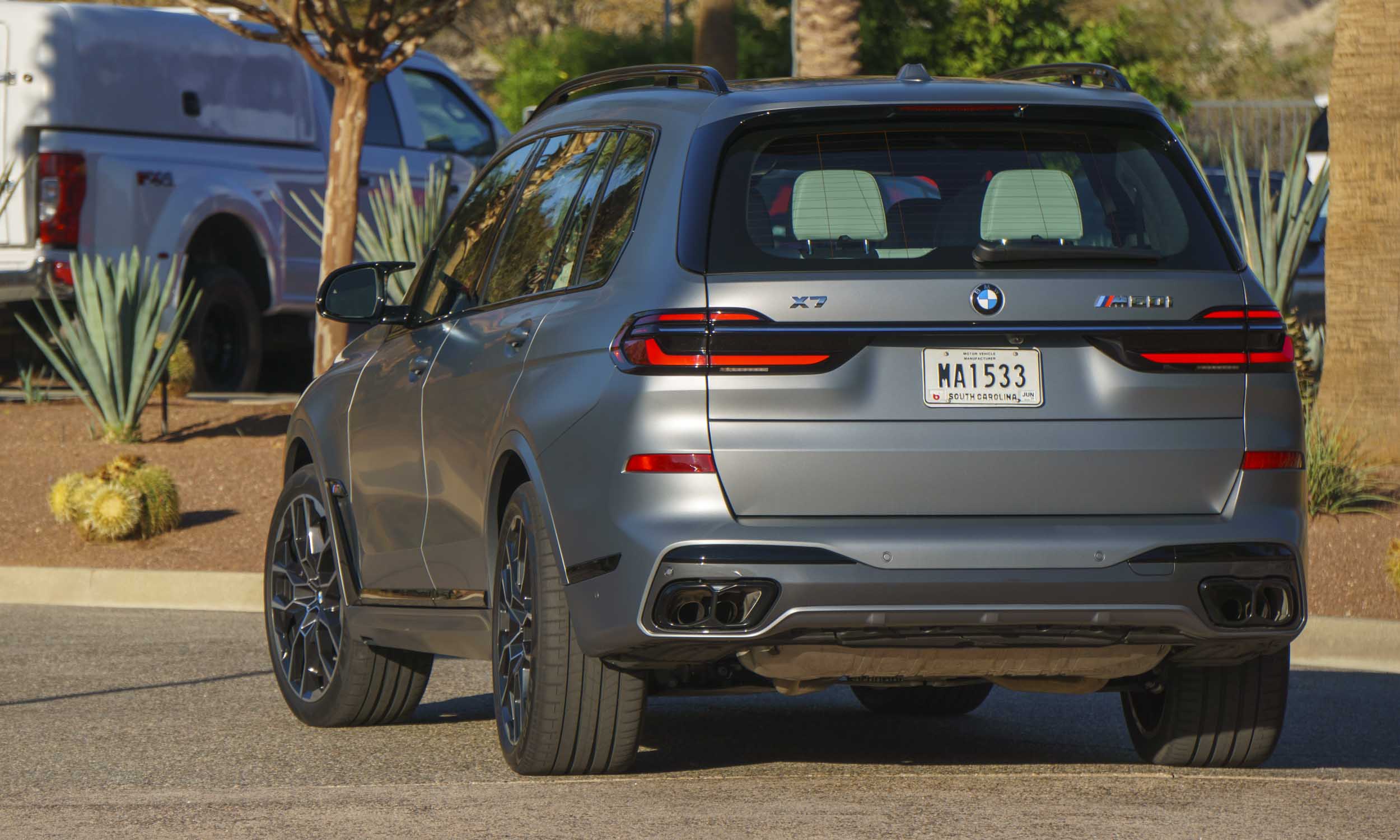 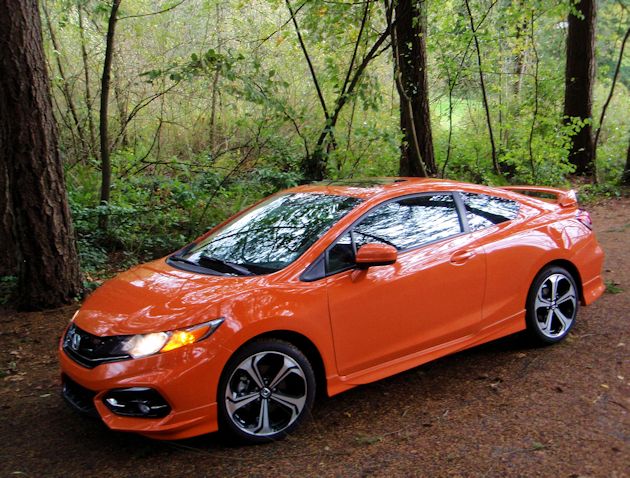 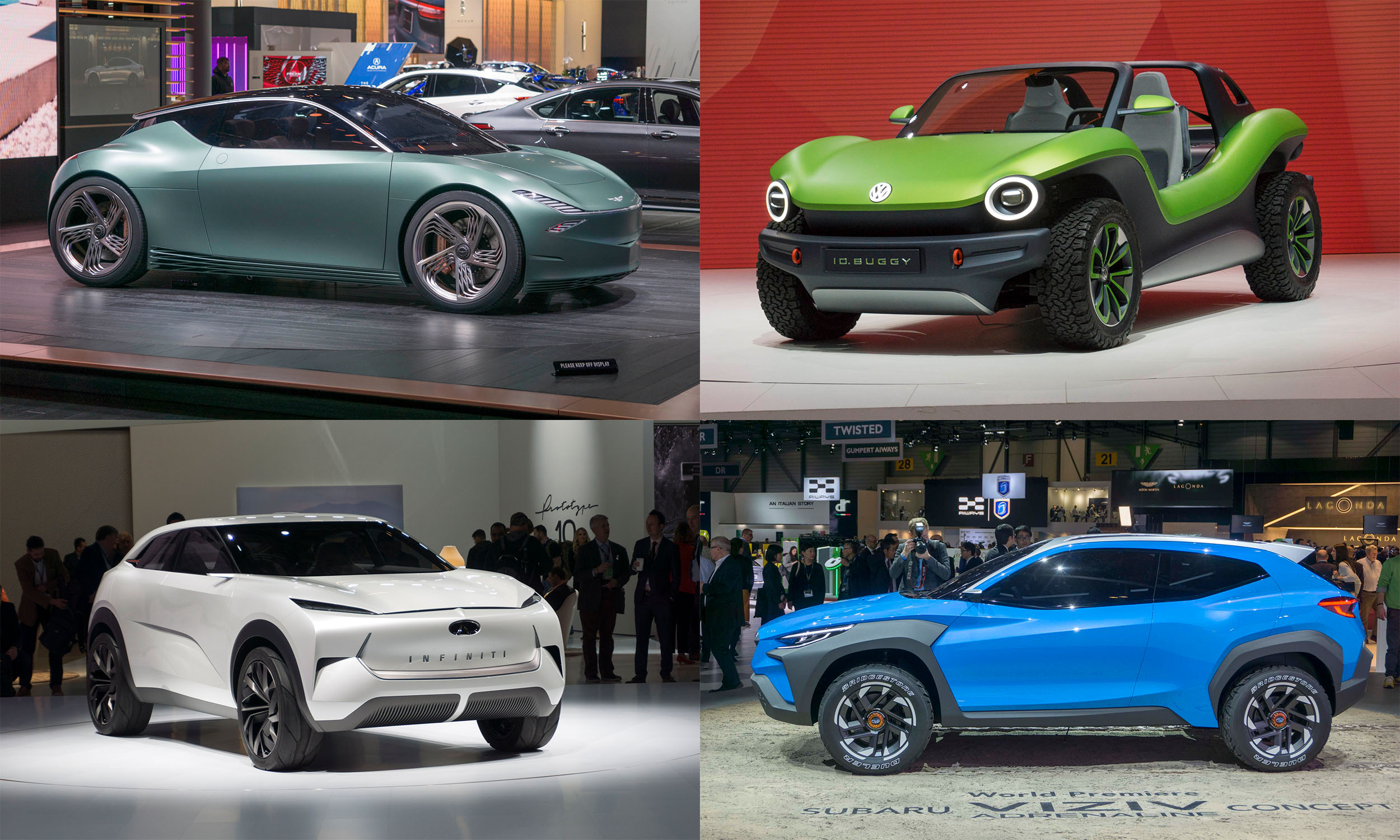