What Is It?
Bentley joined the lucrative SUV market in 2015 with the brand-new Bentayga. Designed to offer the same lavish experience expected of this famed British marque — but with proper SUV capability — the Bentayga quickly became the brand’s best-seller. Last year Bentley redesigned the Bentayga, and now the company offers the 2023 Bentley Bentayga Extended Wheelbase. Without sacrificing performance or capability, the EWB delivers an ultimate luxury experience for rear-seat occupants, taking the place of the outgoing Mulsanne. 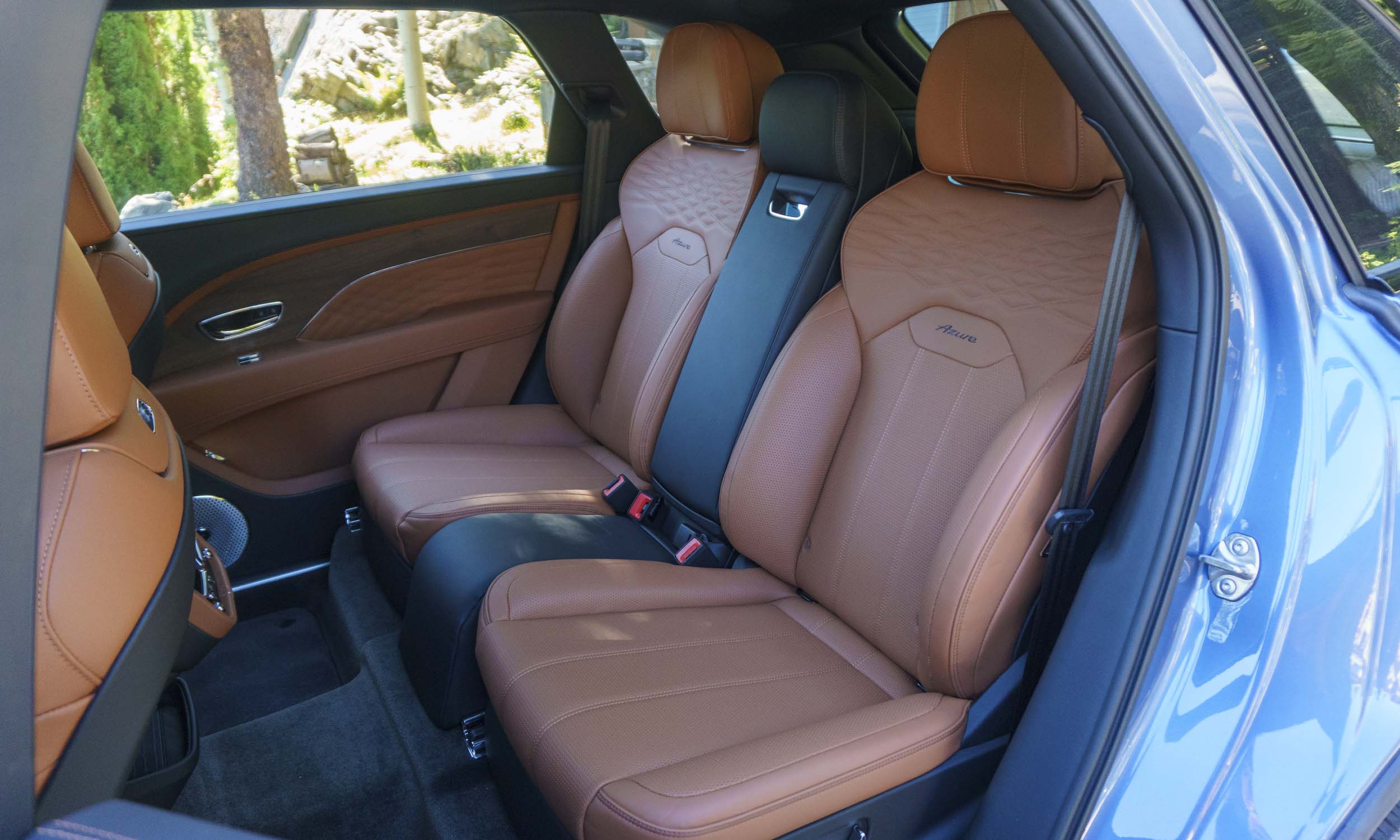 Feeling Relaxed
“The Bentayga Extended Wheelbase is our first car truly dedicated to the onboard wellness of its occupants,” said Chairman and Chief Executive of Bentley Motors Adrian Hallmark. “Every Bentley gets you to your destination feeling more relaxed than when you started your journey, and yet with the Extended Wheelbase, we’ve been able to go even further thanks to the adoption of world-first wellness technology embedded within our unrivaled interior cabin design. In combination with the incredible skills of the craftspeople at our carbon-neutral factory in Crewe, these advances make the Bentayga Extended Wheelbase the ultimate luxury SUV to drive or be driven in,” Hallmark observed. 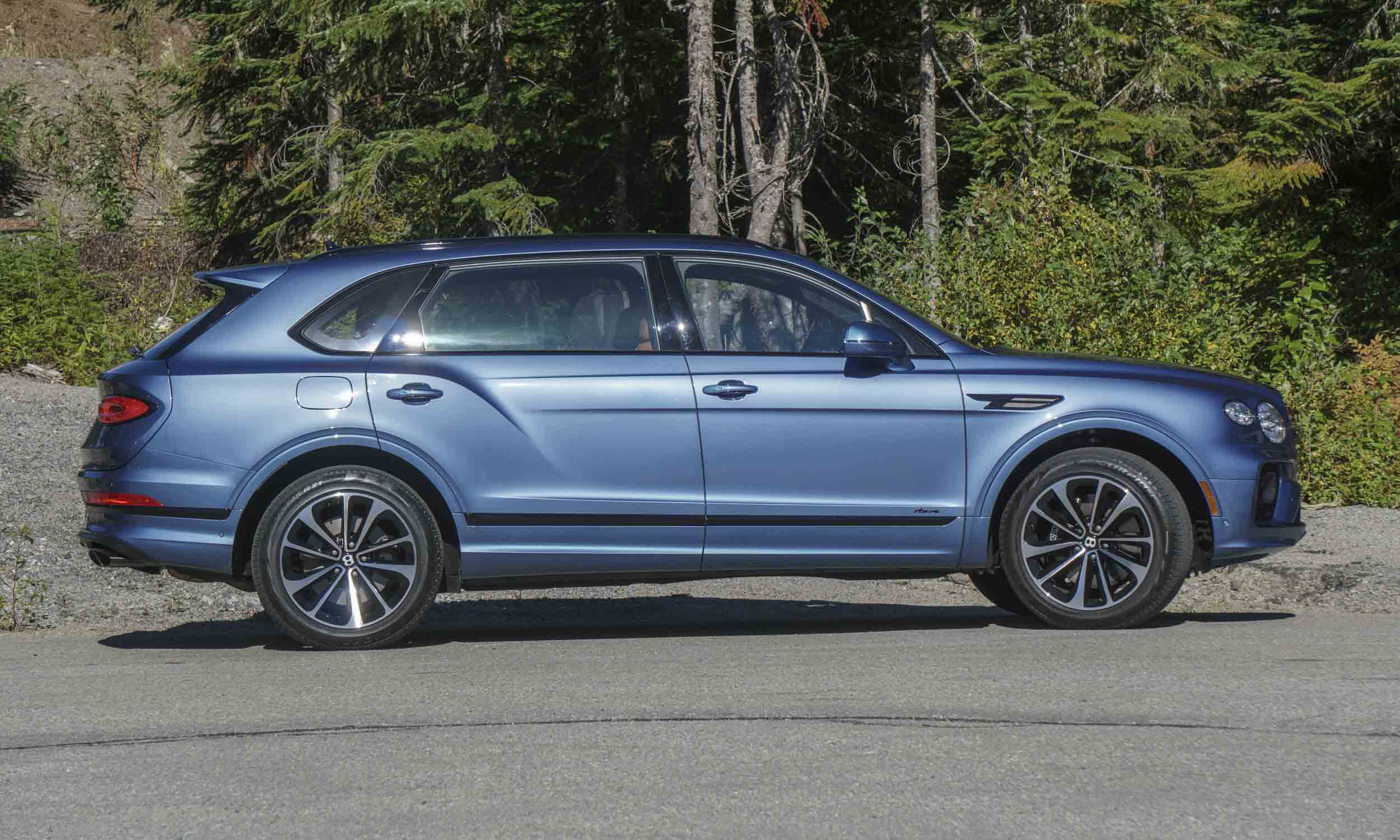 Versus the Standard Bentayga
The 2023 Bentley Bentayga Extended Wheelbase is not simply a stretched version — it rides on a new underbody with 2,500 new parts. At the same time, design changes are minimal. Bentley designers were able to restyle the Bentayga EWB so the proportions look spot on. Without a standard wheelbase version to compare against, the EWB looks like another Bentayga. But it is indeed larger — the wheelbase of the EWB is about 7 inches longer and overall the vehicle is 6.4 inches longer. Width and height remain virtually unchanged (the EWB is 0.5 inches higher), and the additional space is dedicated entirely to the rear seat. Subtle Styling Changes
Besides the extended length of the Bentayga EWB, the vehicle possesses subtle differences between it and the standard Bentayga. The EWB features a bold grille with bright chrome vertical vanes (in Black with optional Blackline Specification) instead of the matrix grille, yet still flanked by stylish LED matrix headlights. Also unique to the Bentayga EWB are polished 22-inch 10-spoke alloy wheels. Other less noticeable items are longer rear doors and a repositioned sunroof that has moved rearward to properly fill the rear cabin with natural light.

Pricing
The 2023 Bentley Bentayga EWB has a base retail price of $226,900 — a $20,900 bump over the standard Bentayga. Bentley also offers the enhanced Bentayga EWB Azure, which brings the price to $263,500. Of course, Bentayga customers can customize their new models to their liking. With 24 billion possible configurations, the odds of two identical Bentayga EWBs passing each other is remote. Bentayga EWB Azure
The Azure name may sound familiar — the British marque produced an Azure convertible from the late 1990s until about 10 years ago; and now the name represents the most luxurious of the Bentayga EWBs. The Bentayga EWB Azure adds to a long list of standard features with 22-way adjustable front seats with adjustable side bolsters, comfort head restraints, heating, ventilation, and multiple massage functions. The Azure also features Bentley Dynamic Ride, which uses an active anti-roll system to keep the vehicle flat and stable during cornering, reducing stress on the passengers. Other additions include a range of enhanced driver-assist systems, head-up display and night vision. Unique quilted seats and mood lighting complete the Azure experience. Touchscreen Remote
A small digital display between the two rear seats allows rear passengers to access climate controls, the audio system, the blinds, lighting — as well as check on how fast the vehicle is traveling. Passengers can also accesses all seat controls including reclining, heating, cooling and massage. And for additional convenience, the display can be ejected to use as a handheld device. The control is right sized, with a feeling of heft that makes it easy to use and comfortable to hold. When done, it gets placed into its base and locks in automatically. Airline Spec Seats
Taking advantage of the extra rear-seat real estate, Bentley offers the ultimate in-seat comfort with new Airline Spec Seats. When put into “relax” mode, the seat can recline up to 40 degrees and a footrest folds down from the front seatback. Using the rear-seat remote, the right-rear passenger can also adjust the front seat forward for maximum legroom. Selecting “business” mode moves the seat back to its most upright position. An even more appropriate moniker would be First Class Seats. Let’s face it, most seats on an airplane are cramped and uncomfortable, and it’s likely that most Bentley customers tend to sit in the most comfortable seats at the front of an airplane. Additional Comfort
The Airline Spec seats do much more than recline; new seat technology increases overall comfort and wellness. Seat Auto Climate lets occupants select a desired temperature and the seat will continuously monitor the contact temperature and surface humidity in both the cushion and seatback, adjusting as needed to maintain optimal body temperature. Also new is a Postural Adjustment function that uses pockets in the thigh, shoulder, and lumbar areas to continuously and almost imperceptibly adjust the seat to relieve pressure points. Six independent zones can provide up to 177 adjustments over three hours to ensure seat comfort without the fatigue that often accompanies long trips. For Rear Seats Only
The Wellness features designed to eliminate fatigue on long road trips are only available to rear-seats passengers. This seems like a lost opportunity. Having these features available to keep drivers alert and comfortable would seem like an ideal use of this technology. Perhaps in future iterations Bentley will add these features throughout the vehicle. Power Close
Perhaps it’s not really necessary, but why should a rear-seat passenger have to reach out and pull the door closed? Instead, holding a button on the center console will close the door automatically — a first for a Bentley. When exiting, it takes only a slight push once the door is unlatched to open the big door. Closing from the outside again takes a slight push to close and latch. Under the Hood
At launch the only engine available for the Bentayga EWB is a 4.0-liter twin-turbo V8 producing 542 horsepower and 568 lb-ft of torque. Power gets sent to all four wheels via a ZF 8-speed dual-clutch gearbox. We wouldn’t be surprised to see the Bentayga EWB offered with a hybrid powertrain, currently available in the standard wheelbase version. Performance Specs
Weighing around 200 pounds more than the Bentayga standard wheelbase, the performance of the EWB remains strong. The big SUV can reach 60 mph in 4.5 seconds and 100 mph in 10 seconds. These figures are a mere tenth of a second slower than the standard wheelbase. The top speed remains at 180 mph. Rear Steering
With standard rear-wheel steering, the 2023 Bentley Bentayga Extended Wheelbase is surprisingly maneuverable in tight spaces. The EWB has a tighter turning radius than the standard-length Bentayga. On the Road
We’ve already driven the Bentayga standard wheelbase, and we’re pleased to report that none of the vehicle’s on-road drivability gets lost with the new Bentayga EWB. Thanks to plenty of power on tap, the big SUV gets moving quickly accompanied by a lovely V8 roar that penetrates the otherwise quiet cabin. The Bentayga EWB easily cruises at 80 mph; we suspect it would be perfectly comfortable at considerably higher speeds. At the same time, the Bentayga EWB is equally competent cruising through town. The four-wheel steering provides impressive maneuverability when pulling into tight parking spaces. Enjoyable Drive
As comfortable as the Bentayga EWB can be while cruising at highway speeds, the big SUV is also enjoyable when the road gets a bit twisty. Heading into the mountains outside Whistler, BC, the big SUV didn’t feel so big — instead the descriptors “agile” and “nimble” came to mind. Steering is precise with decent feedback, and the active anti-roll system works amazingly well, keeping the Bentayga flat in the turns which adds to the overall confident ride. Bentley expects the EWB to make up 45 percent of Bentayga sales. After spending a day with this new model, we would guess that number is conservative. Daily Driver?
Most Bentley owners have multiple vehicles in their garages, and the Bentley is often kept for special occasions. Not so with the Bentayga. According to Bentley, 82 percent of Bentayga customers use the SUV as a daily driver — the first Bentley model ever used in this manner. We could easily imagine driving a vehicle like this every day. Off-Road
Although most Bentayga SUVs will never leave pavement, we discovered that the 2023 Bentley Bentayga Extended Wheelbase is quite capable where the roadway ends. Driving to the top of the Olympic ski jump at Whistler Mountain, the track consisted of loose rock and dirt, but it didn’t faze the Bentayga. Traction never faltered and wheelslip was almost undetectable while the cabin remained quiet and comfortable. With the drive mode set for off-roading, the Bentayga automatically engages hill descent control in one of the most seamless systems we’ve experienced. Simply lifting off the throttle as the descent began kept speed slow and steady, and adding throttle quickly disengages the system. Rear-Seat Experience
It’s no secret we like to drive, and the Bentayga is incredibly enjoyable from behind the steering wheel. However, after spending some time riding in the rear seat of the EWB, we could be convinced that having a chauffeur handle the driving duty is not such a bad idea. Experiencing the Sea to Sky Highway north of Vancouver, BC, was nothing short of sublime. With the seat reclined and our brain embedded in the pillow-like headrest, we fully enjoyed the view through the large side windows and panoramic sunroof. Lounging with feet up and seat massager activated was not a bad way to travel — and much more comfortable than any airplane we’ve traveled on recently. Right for You?
The Bentley Bentayga is one of the most well-appointed SUVs available, and with the new Bentayga Extended Wheelbase, the level of luxury and comfort takes a mighty step up. Enhancing the roomy rear cabin with some of the most advanced seating available in a car without detracting from the exterior design, driving performance or SUV utility is an impressive feat. Still a wonderful vehicle to drive and experience, one wonders why anyone buying a Bentayga would even consider the standard wheelbase — the new Bentayga Extended Wheelbase is the obvious choice. 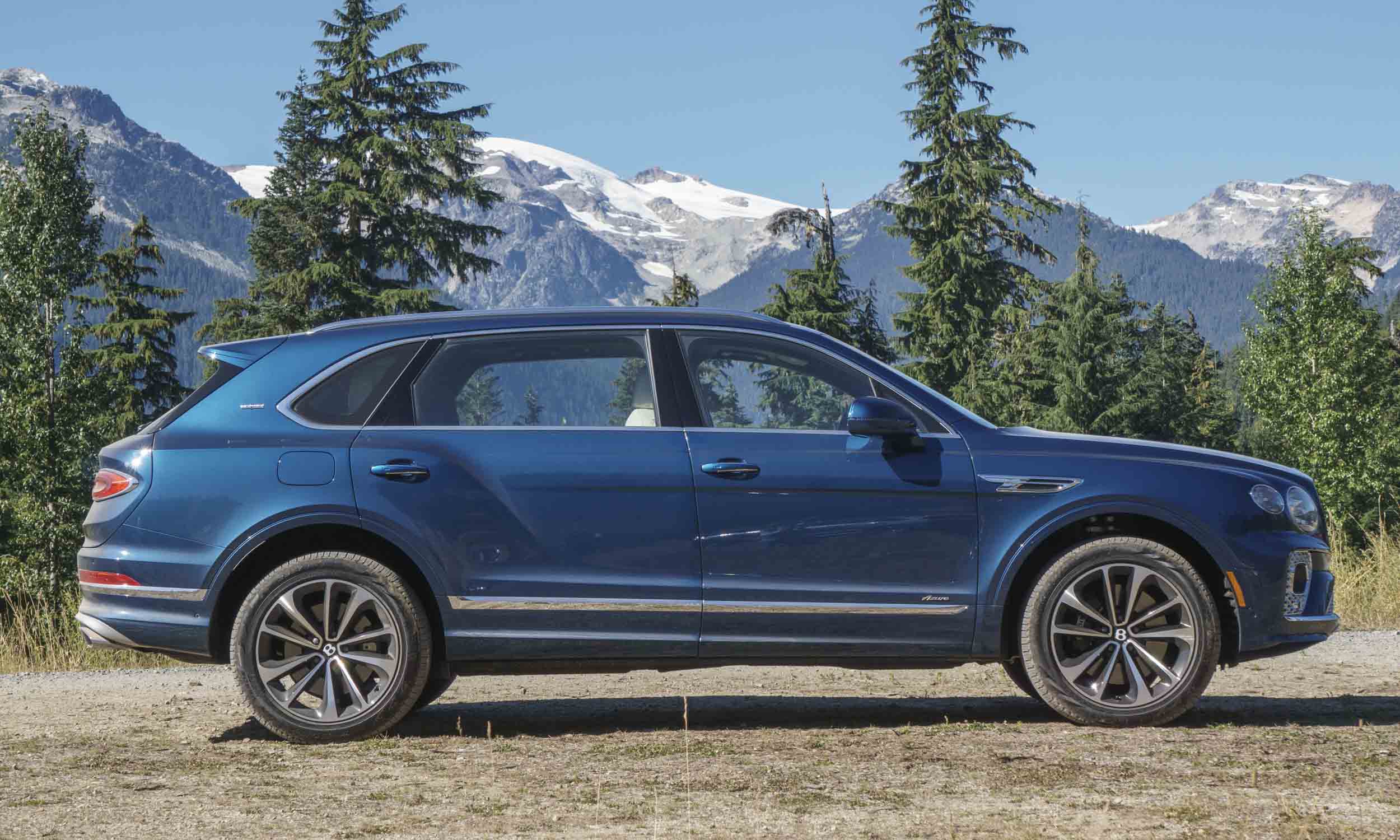