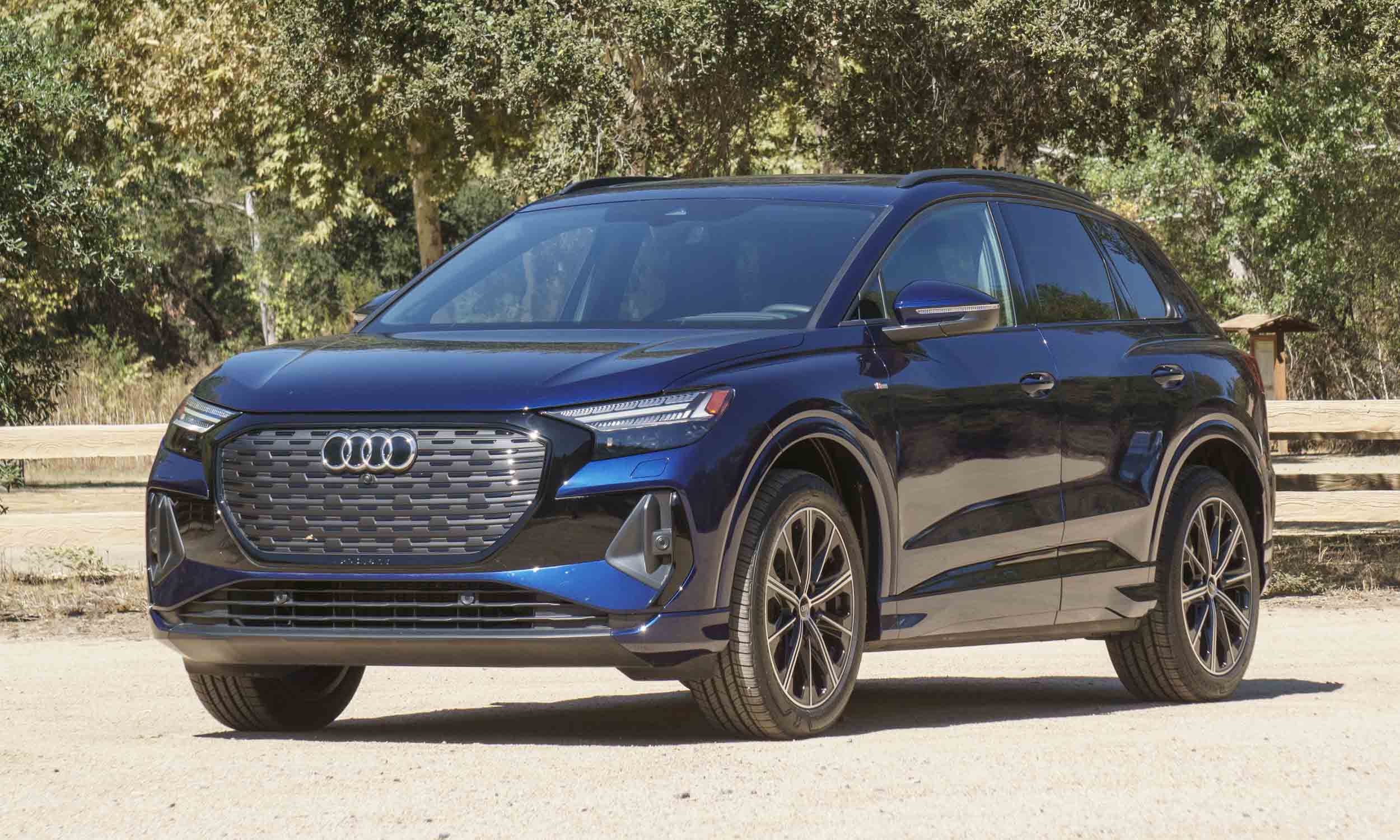 What Is It?
A few years ago Audi premiered its first all-electric vehicle — the e-tron. At the time it was one of the first EVs from a European luxury brand. Now Audi continues to grow the e-tron lineup with the brand-new Q4 e-tron. Available in SUV and Sportback styles, the Q4 e-tron is a compact 5-passenger crossover about the same size as the Audi Q5 and is now Audi’s most affordable EV. The Q4 e-tron will be instrumental to the brand reaching its lofty goal of having 30 percent of its U.S. sales be EVs by 2025. 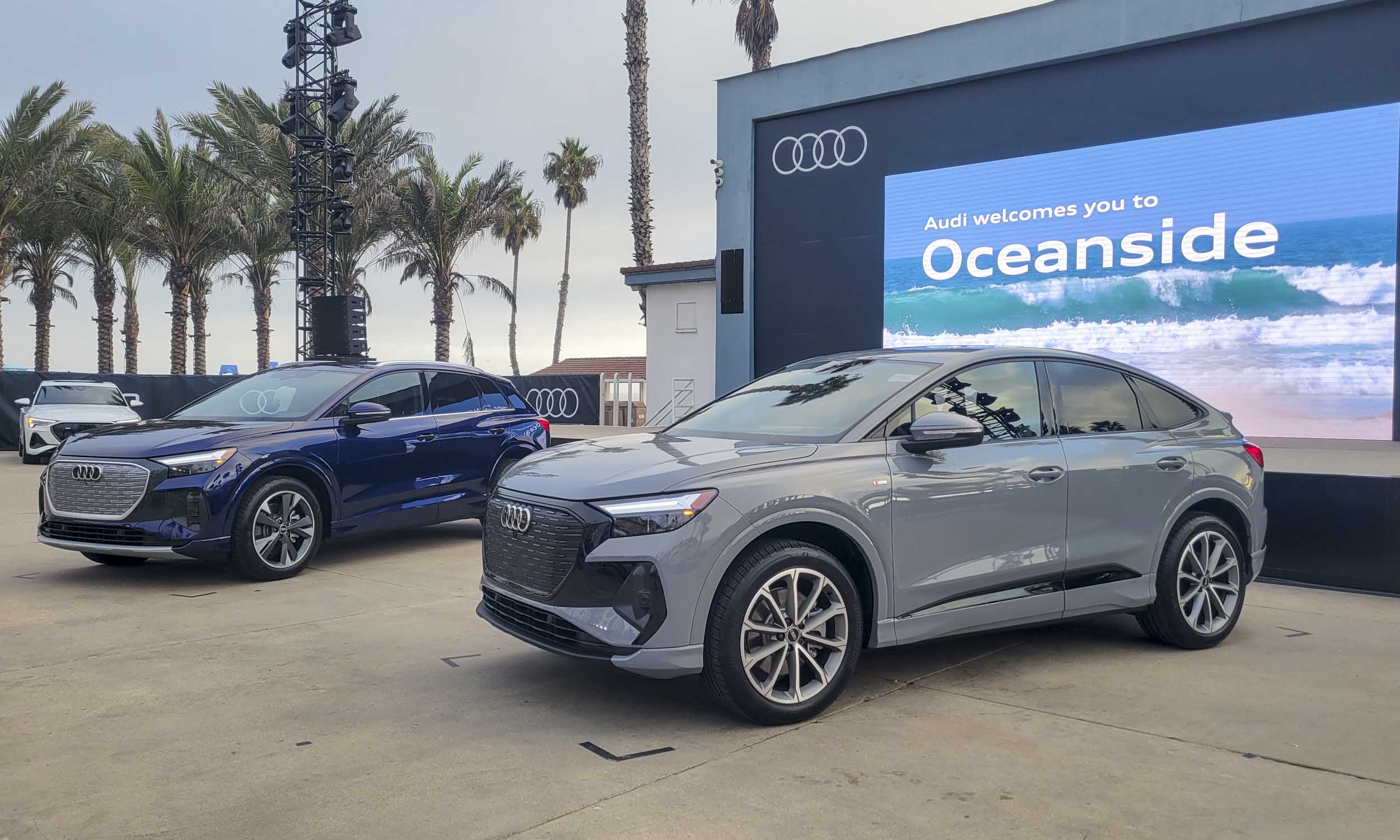 First Drive
Audi brought a small group of auto journalists to Oceanside, California, to showcase this latest e-tron model. The Q4 e-tron sold in small quantities for the 2022 model year, and the 2023 versions haven’t arrived in the U.S. yet. The information presented here is based on the 2023 Q4 e-tron, although the vehicles we drove and photographed were from the 2022 model year. Mechanically the two model-year vehicles are identical, with some slight packaging and trim differences that we’ll call out where appropriate. 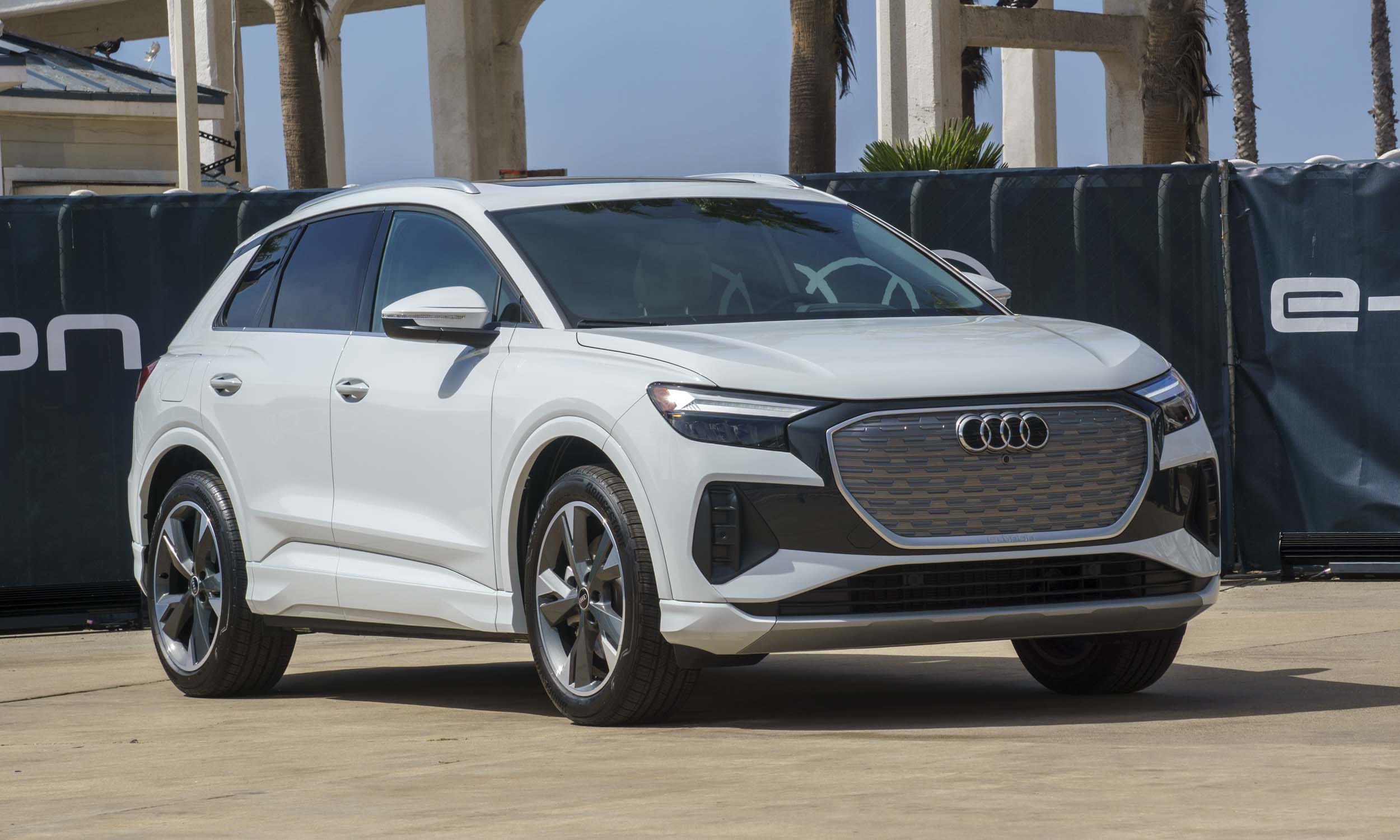 e-tron Styling
The Q4 e-tron features Audi’s signature Singleframe grille; however, the sealed grille opening has a stylish pattern distinguishing the e-tron from non-electric models in the Audi lineup. The grille gets flanked by stylish LED headlights available with programmable LED daytime running lights (more on this later). 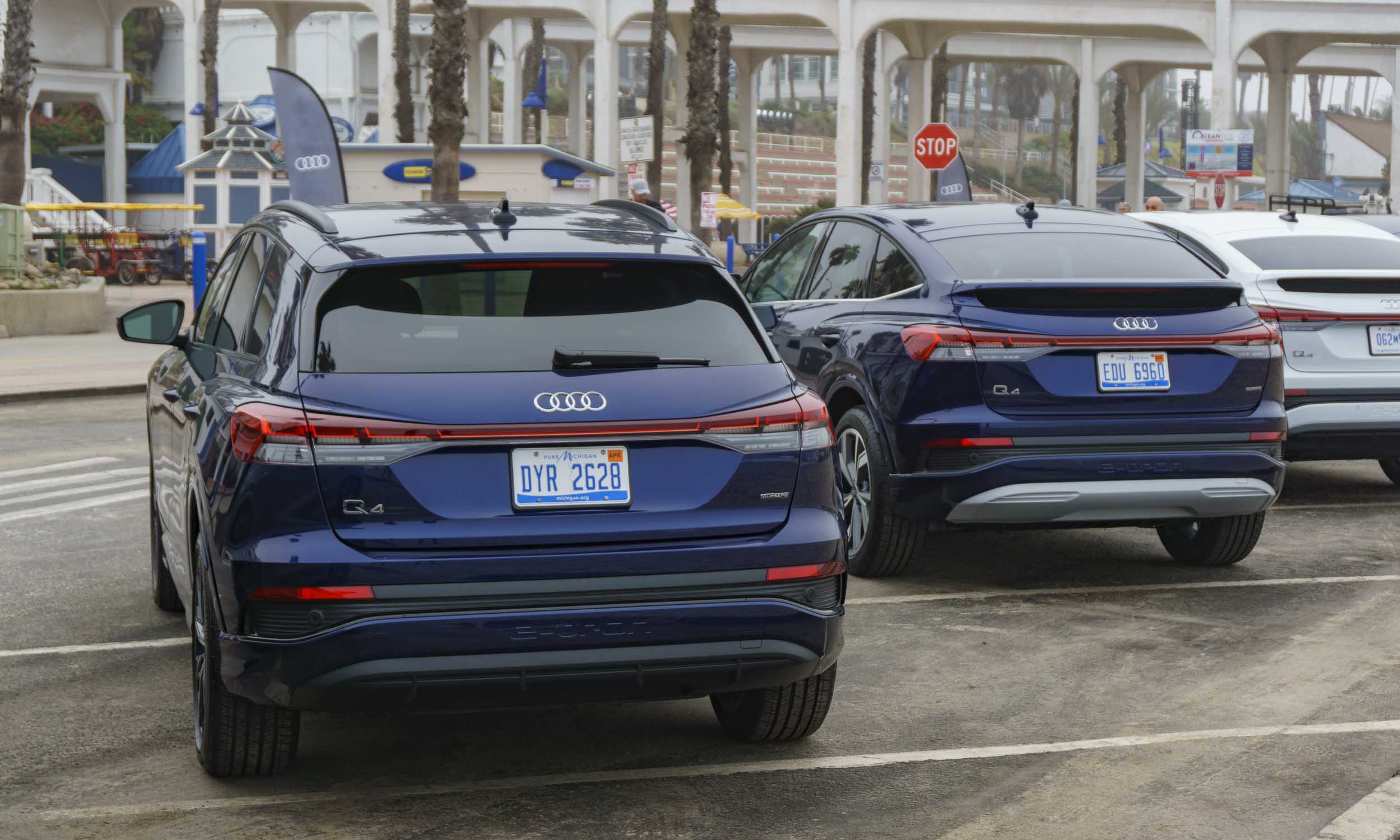 SUV vs. Sportback
Both Q4 e-tron SUV and Sportback are identical up front and below the beltline — the significant differences are at the roofline. The Sportback’s roof has a steeper slope downward, giving it a sportier look but at the same time reducing rear-seat headroom. At the rear of the SUV, the spoiler sits above the window (the spoiler resides below the window on the Sportback). There is virtually no performance difference between the two — vehicle choice is simply a matter of design preference. 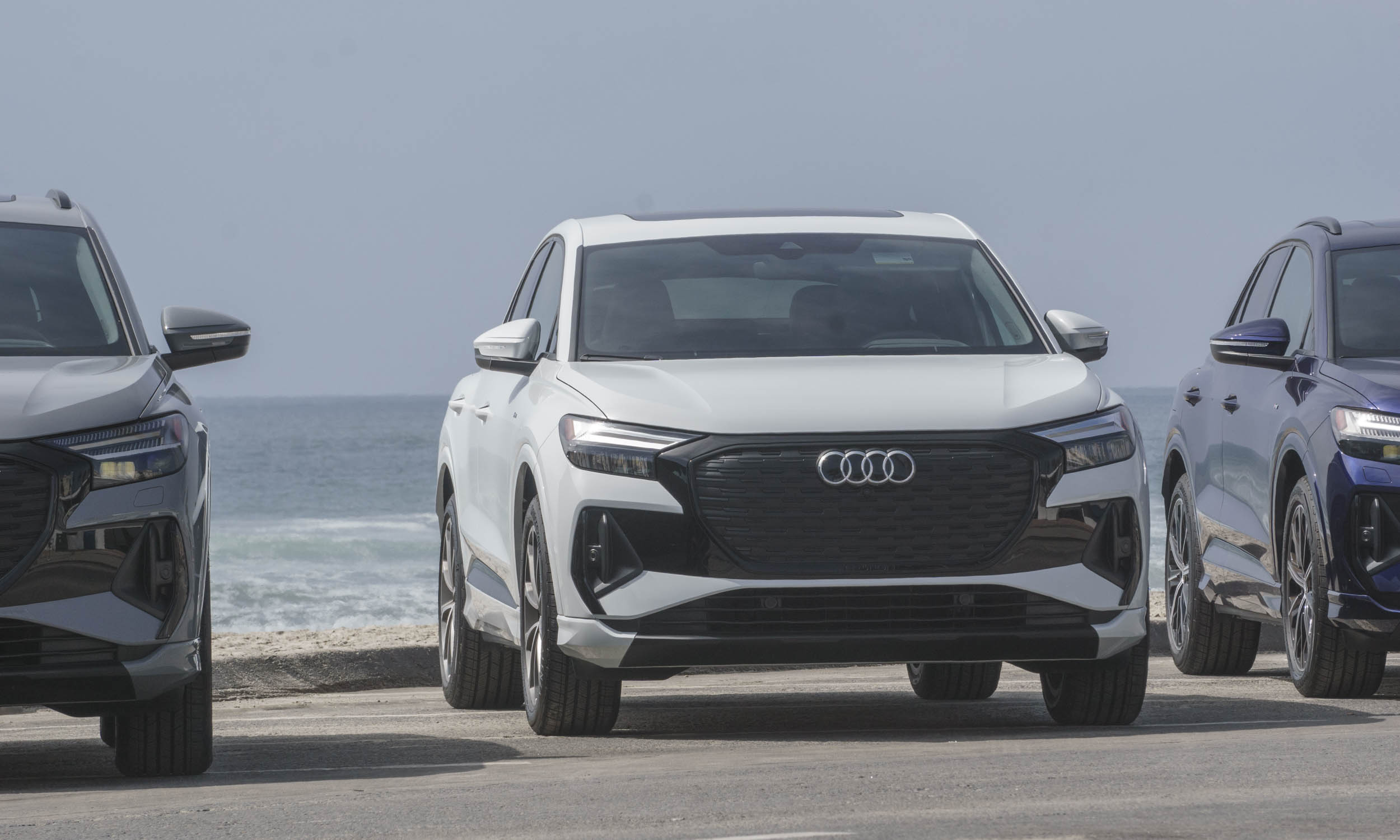 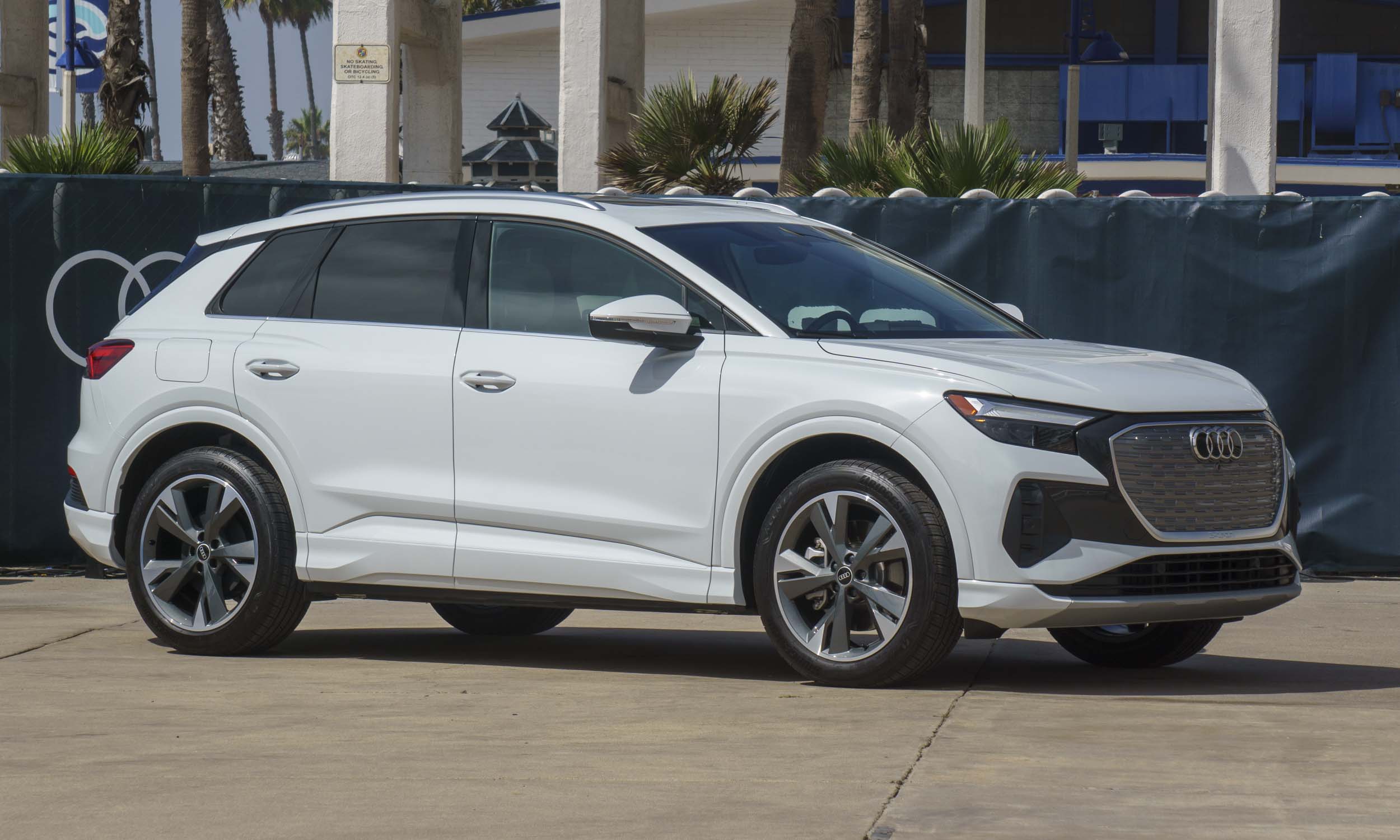 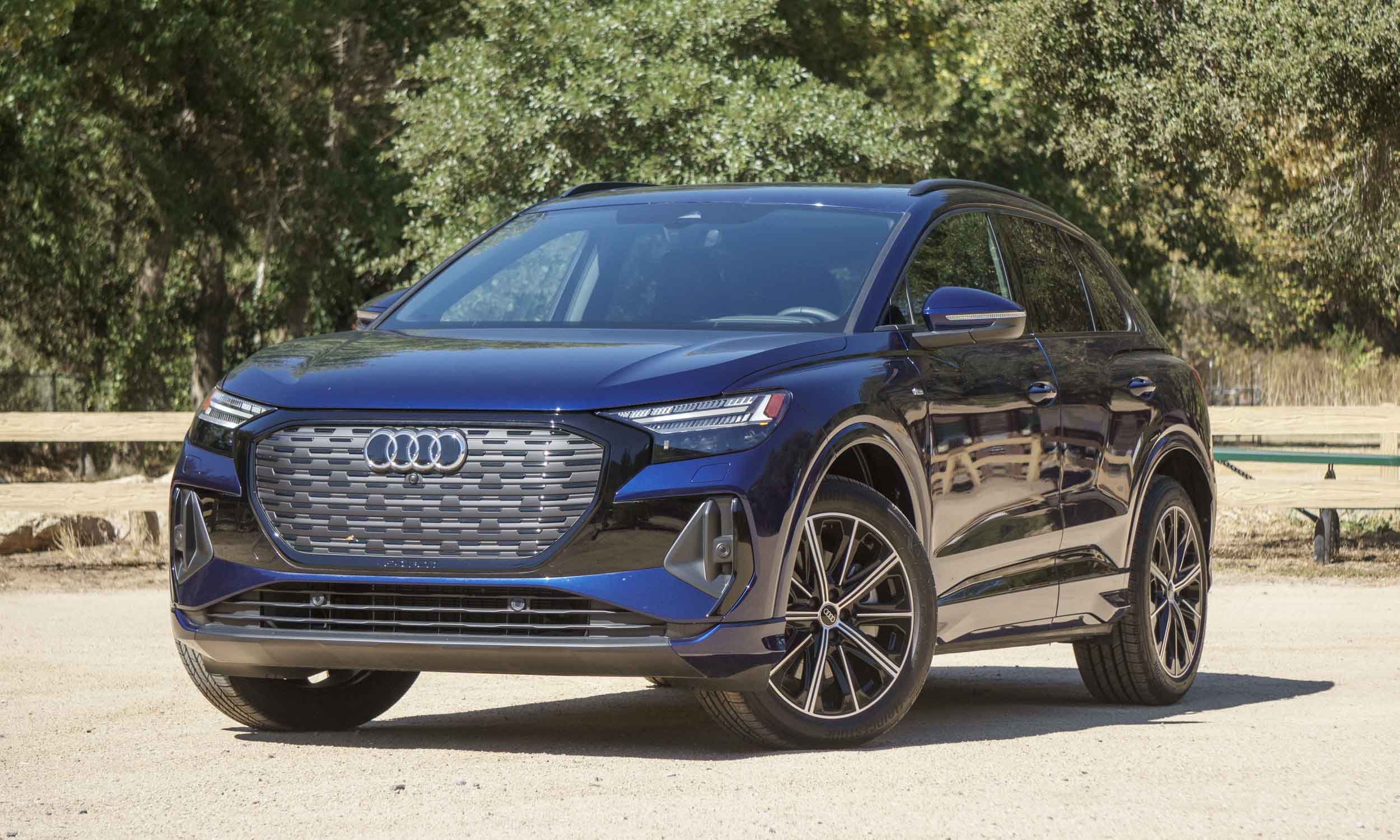 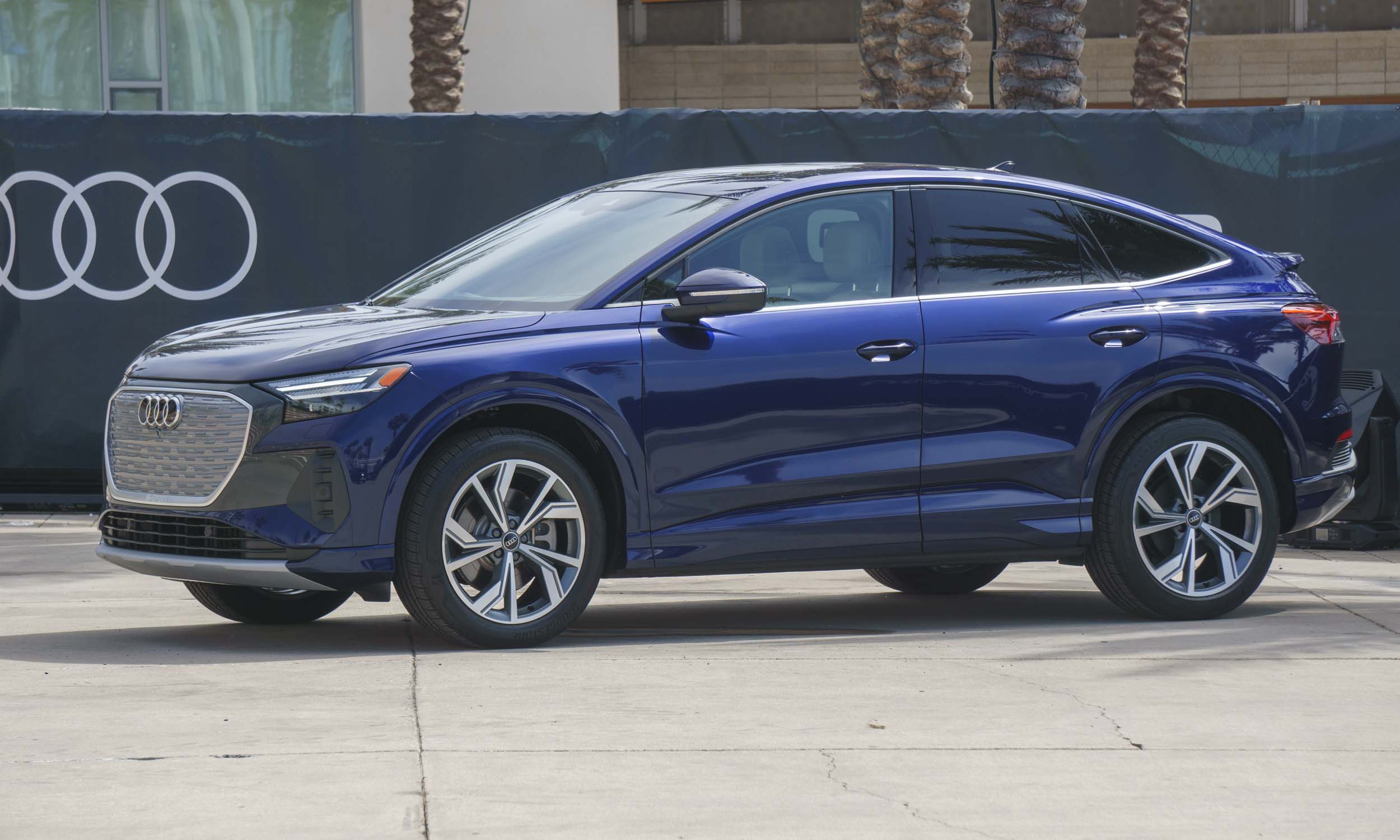 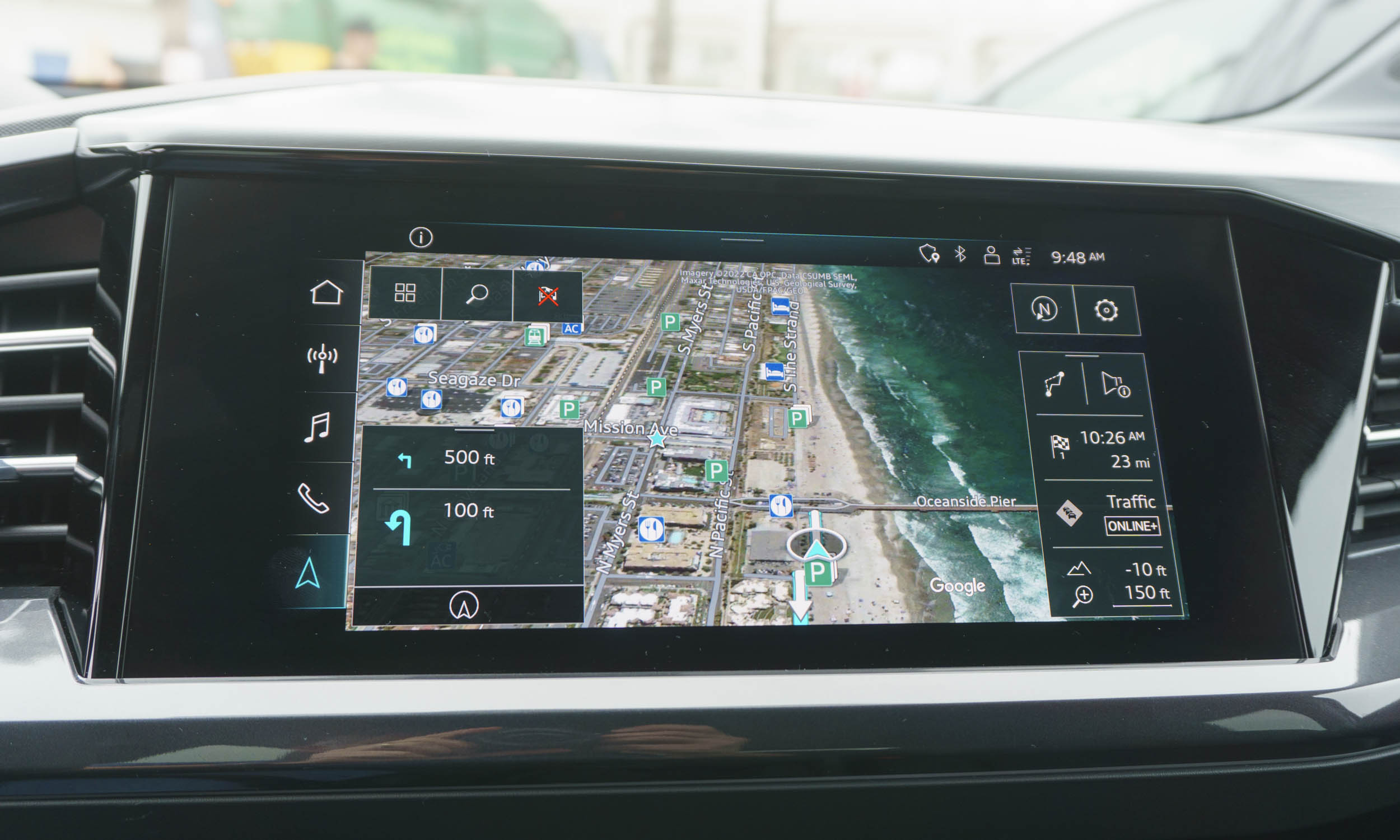 Prestige Plus
Available on the Q4 50 e-tron models for $8,100, the Prestige Plus package adds animation for headlights and taillights, an augmented reality head-up display, headlight washers, and Matrix-design LED headlights. 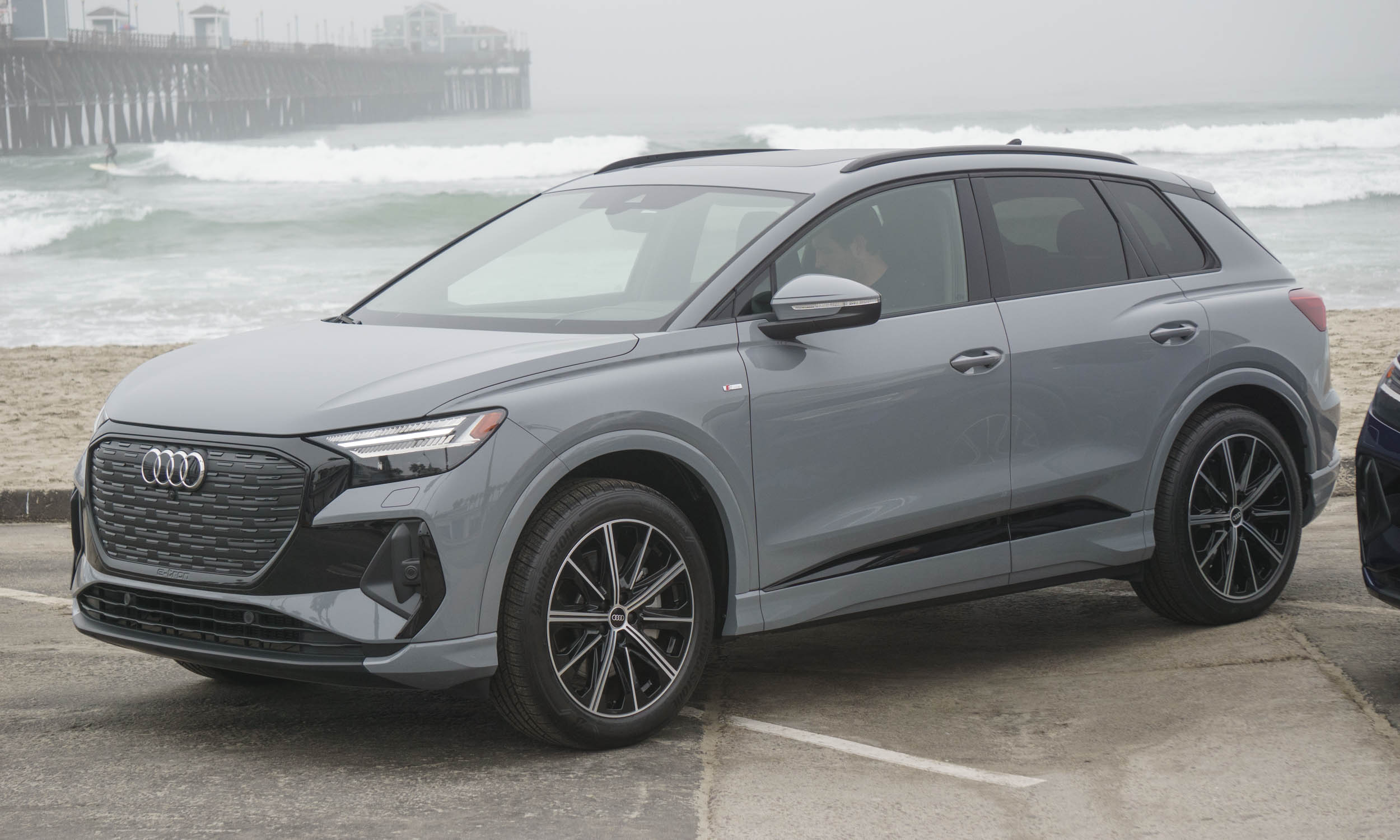 Powertrains
The Audi Q4 40 e-tron draws power from a single rear-mounted permanently excited synchronous motor producing 201 horsepower. The PSM provides high torque and instant response with a max engine speed of 16,000 rpm. The motor is liquid cooled for consistent performance and provides regeneration power to the batteries when coasting. The all-wheel-drive Q4 50 e-tron features the same rear motor but adds an asynchronous motor powering the front wheels for a total output of 295 horsepower. 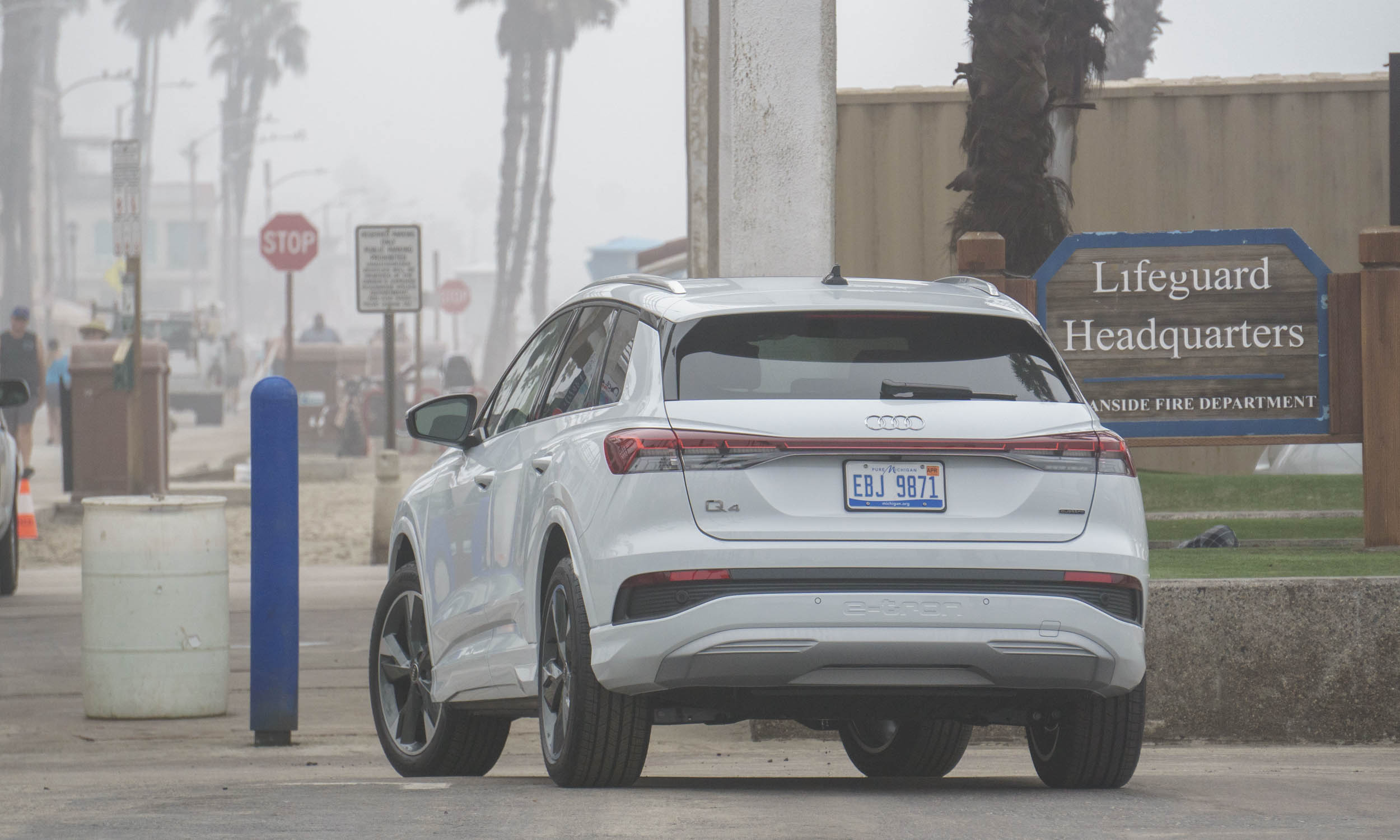 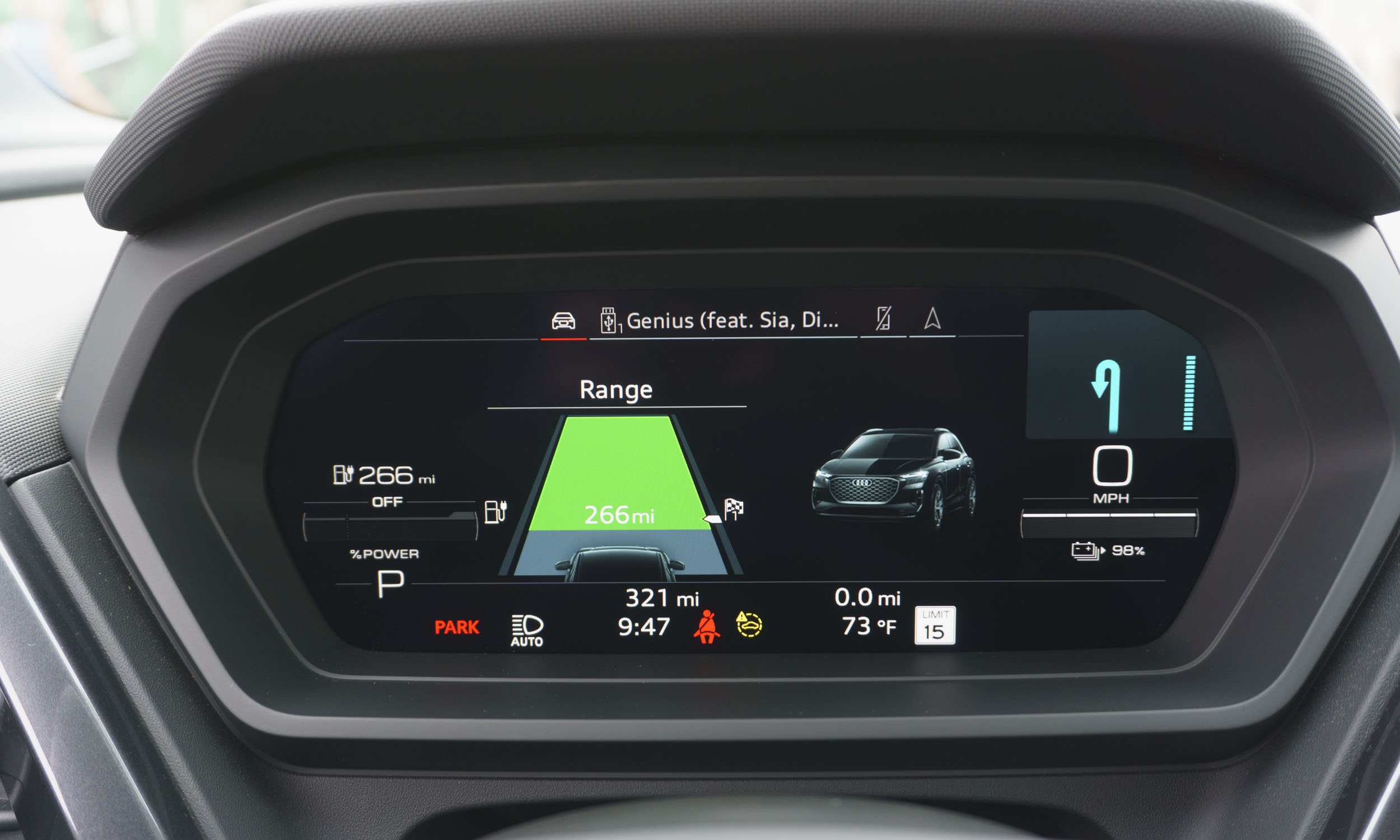 Range and Efficiency
With a single motor, the Q4 40 e-tron has the lowest power output although that gets this model the highest range; it can travel up to 265 miles on a full charge and has an EPA fuel-economy rating of 112 MPGe city / 94 MPGe hwy / 103 MPGe combined. The dual-motor Q4 50 e-tron is rated at 97 MPGe city / 87 MPGe hwy / 93 MPGe combined with a total range of 236 miles. Figures are slightly higher for the Sportback, which reports a range of 242 miles. 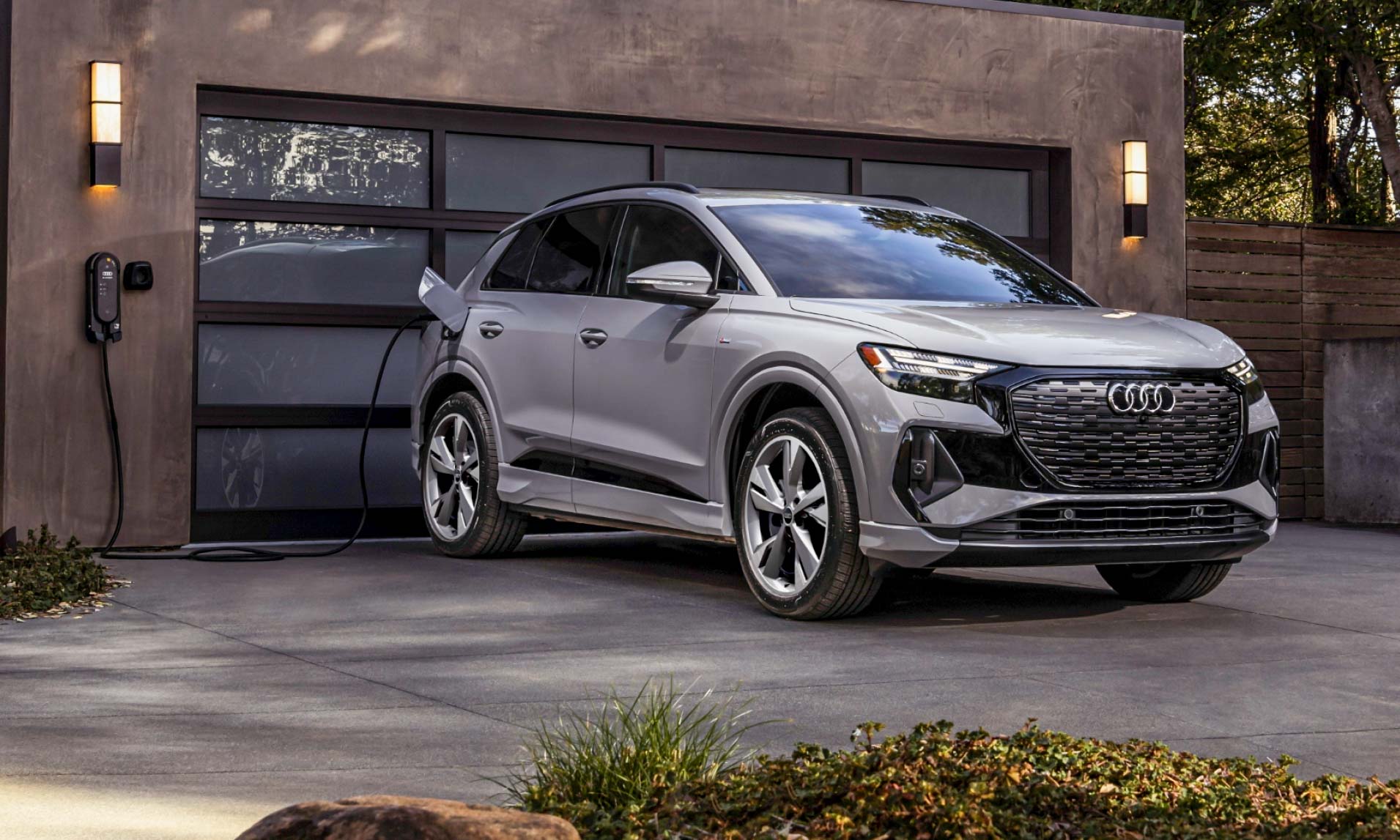 Charging
All Audi Q4 e-tron variants have the same 82 kWh lithium-ion battery, so charging time is also identical. When connected to a 150kW DC fast charger, the e-tron can go from a 5 percent charge to 80 percent in 36 minutes. On a typical Level 2 home charger, the Audi takes about 9 hours to get from empty to 100 percent. Keep in mind that neither of these scenarios is common — most EV owners will charge up before the vehicle gets to such a low level. 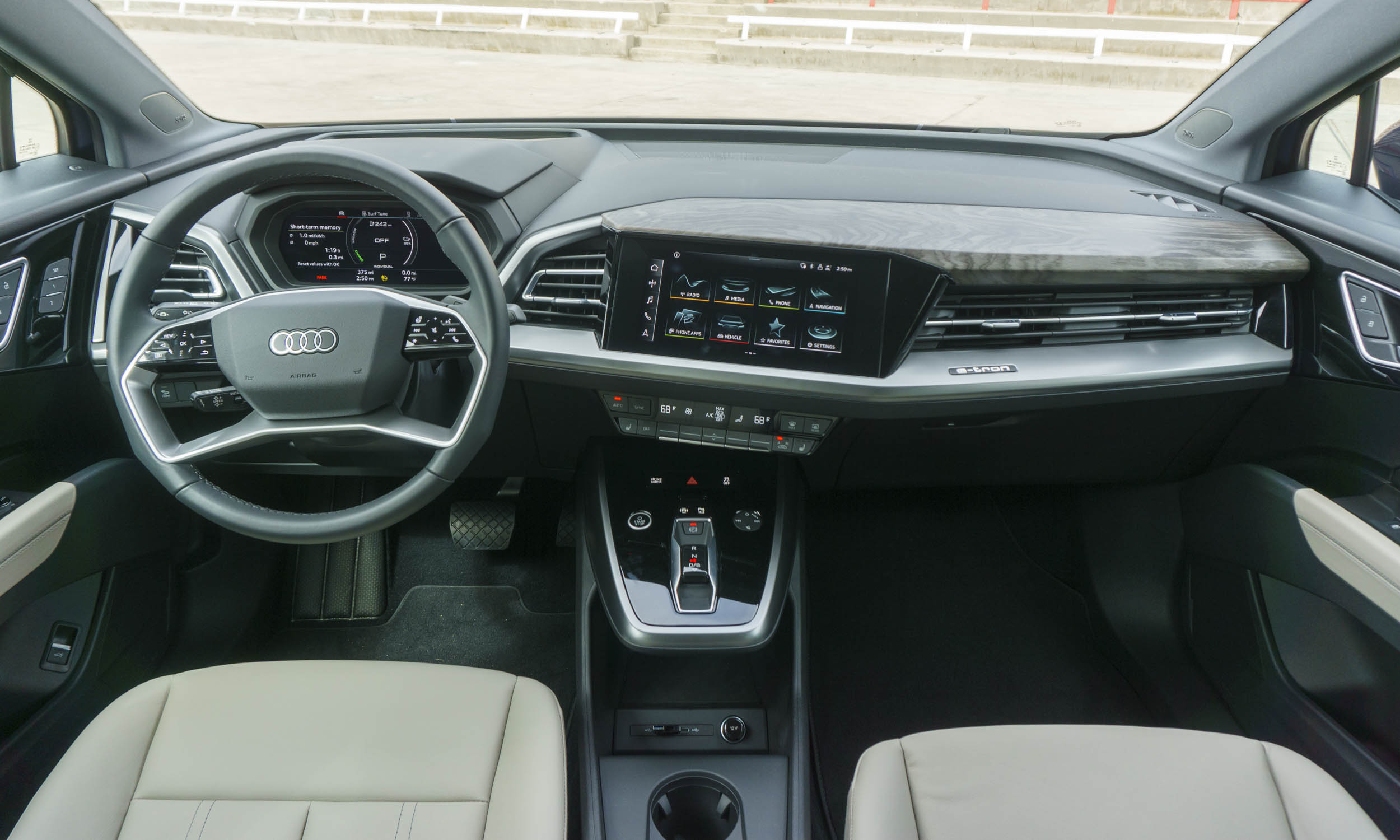 Inner Space
Audi designers have done a laudable job blending luxury and tech in the new Q4 e-tron. With leather seats and wood trim as standard equipment, even the base Q4 e-tron feels like a premium vehicle. The Q4 also has a sharp integrated center display screen with a piano-black center console that houses the gear selector, start button and multifunction volume / tuning knob. Climate controls are kept separate, and we appreciate the quick-navigation buttons on the side of the display screen. 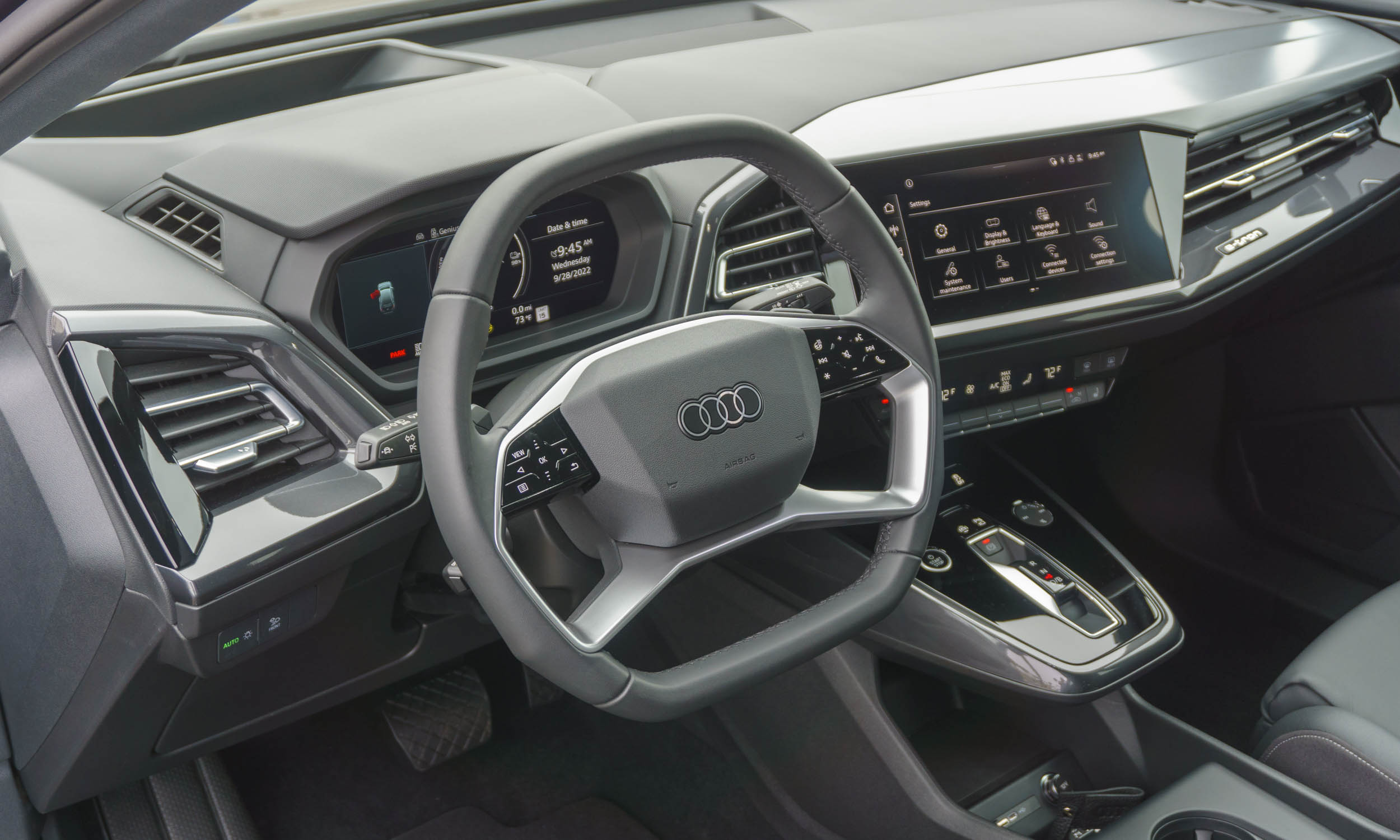 New Steering Wheel
The Audi Q4 e-tron features a new double-spoke multifunction steering wheel shaped to allow easy visibility through the top of the wheel to the digital driver display. Soft-touch controls and sliders on the wheel allow complete configuration of the display, as well as provide access to audio and communication functions. 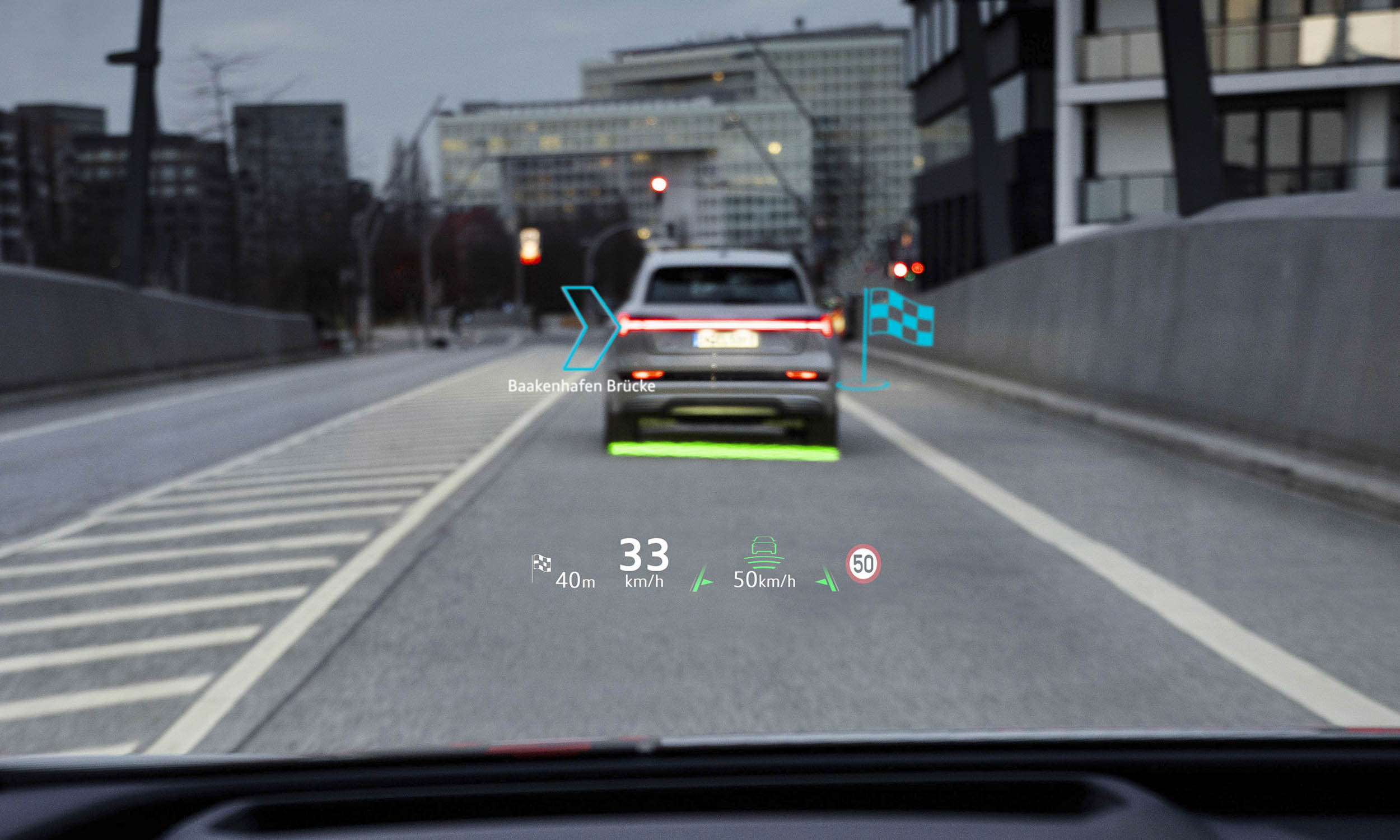 Augmented Reality
A favorite feature of the new Q4 e-tron is the augmented reality assistance that appears in the head-up display. When navigating to a destination, not only does the driver get audio prompts from the system, the head-up display overlays an arrow on the road ahead to provide a visual prompt to an upcoming turn. The system is not quite as sophisticated as the ones in high-end Mercedes-Benz models, but it works well, making it almost impossible for drivers to miss a turn. 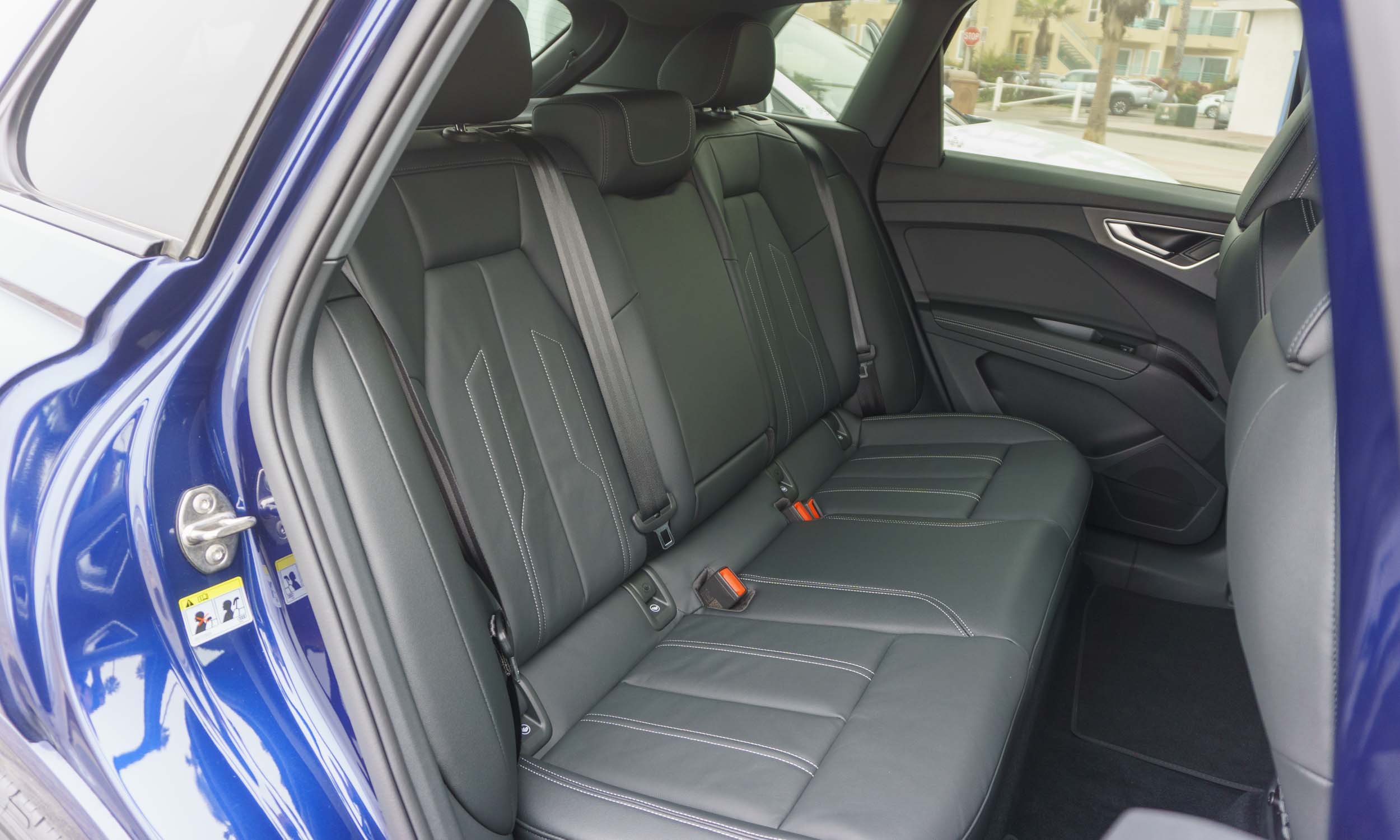 Rear Seat
Taking advantage of an electric drivetrain that doesn’t require a driveline or transmission, the rear seat has a flat floor that adds versatility and makes it more comfortable for passengers. Rear-seat headroom is slightly less (37.0 vs. 38.3 inches) with the Sportback configuration, but the space feels roomy in either case. The flat floor also gives the middle seat more space than usual; however, the stiff seatback makes it a seat nobody would want to occupy for a long drive. 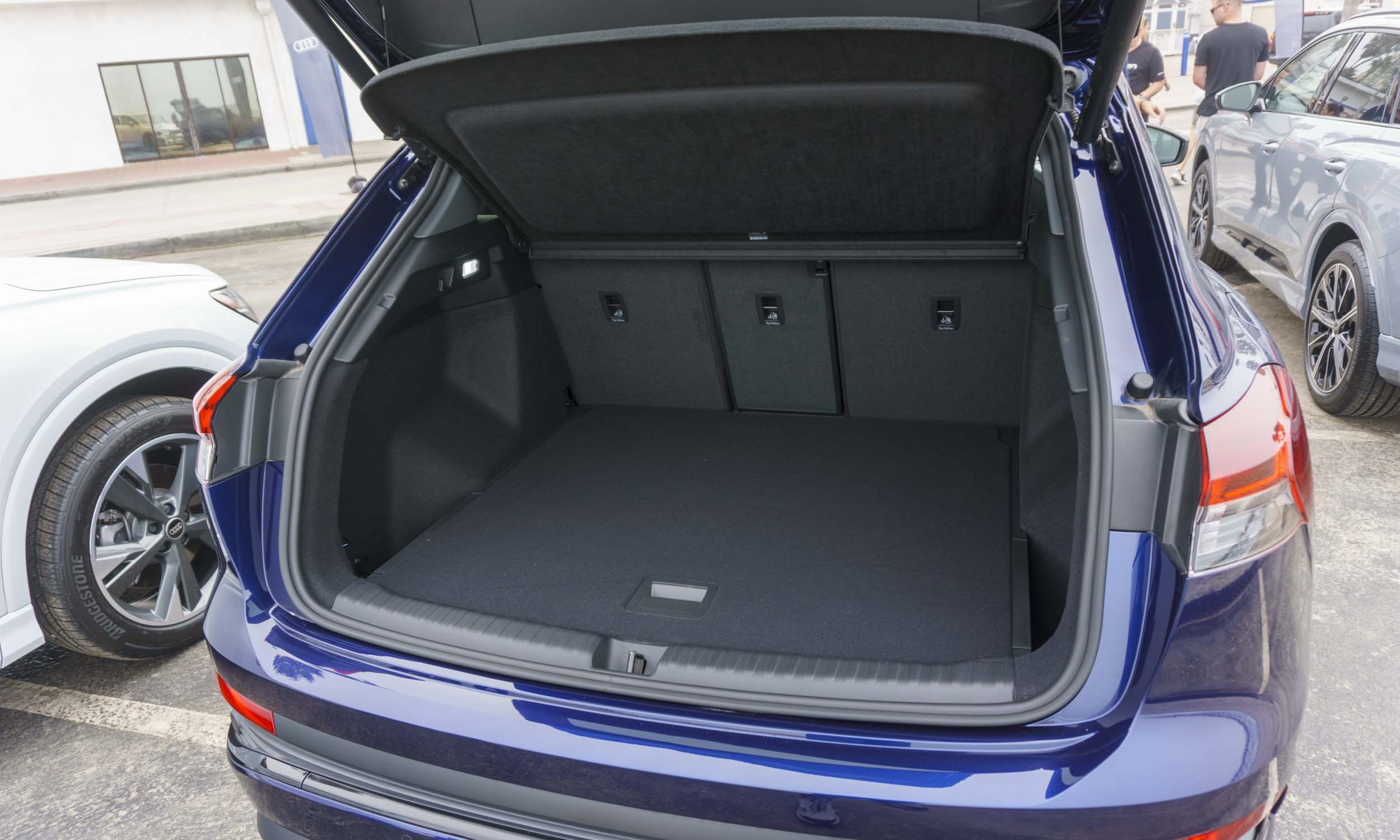 Cargo Space
In either standard SUV or Sportback configuration, the Q4 e-tron offers plenty of space behind the rear seats. Additional storage below the floor is a prime spot for the charging cable. Rear seats can be folded 40/20/40 for added versatility, and long items can be transported without sacrificing the two outward seats in the rear. 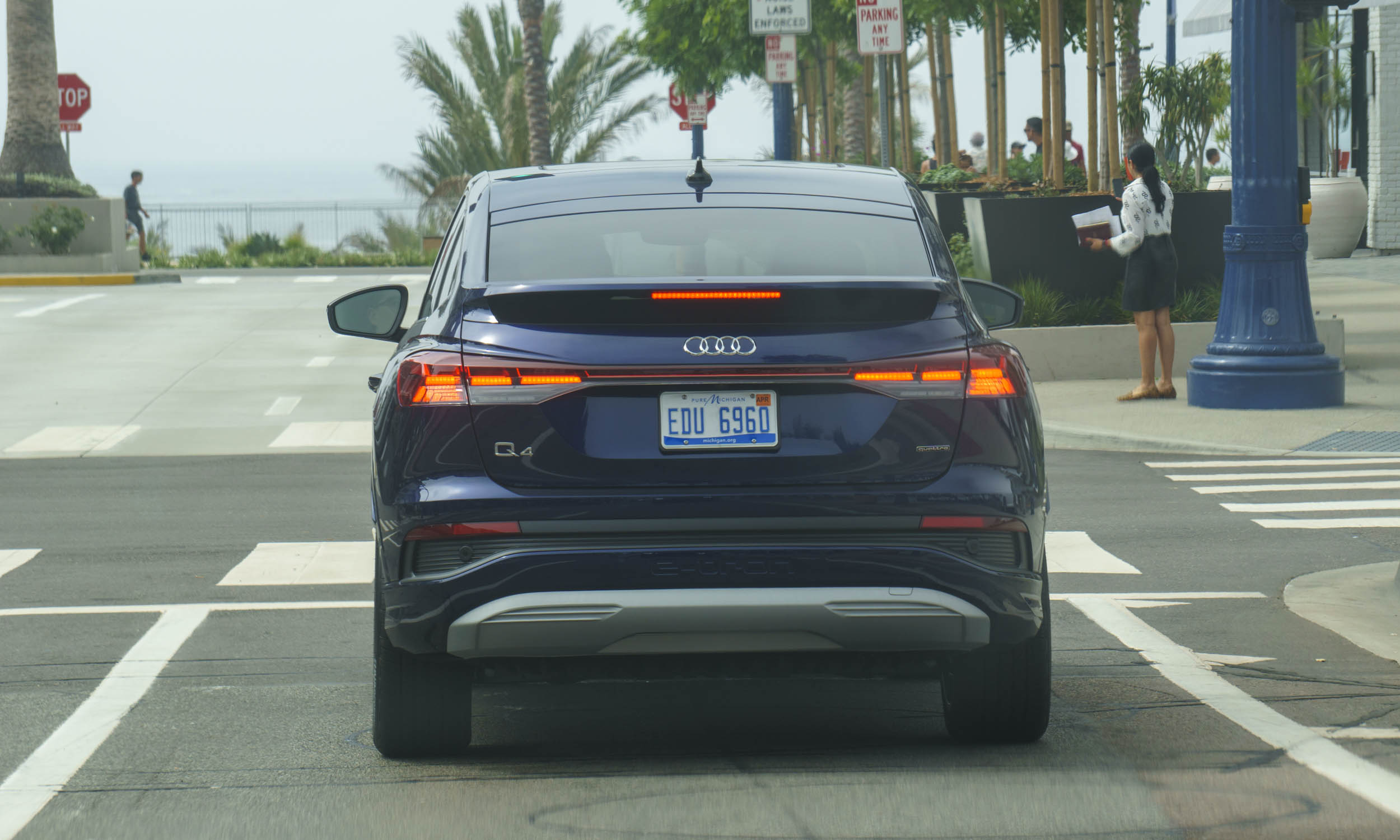 No One-Pedal Driving
Many of today’s new electric vehicles offer one-pedal driving, which engages the regenerative brakes when lifting off the throttle and can slow a vehicle to a complete stop without the driver ever having to press the brake pedal. This feature has become a fast favorite, although Audi does not offer it as a feature on the EV line, believing that consumers will better transition to electric vehicles if they operate in the same manner as a gas-powered counterpart. We’ll agree to disagree. 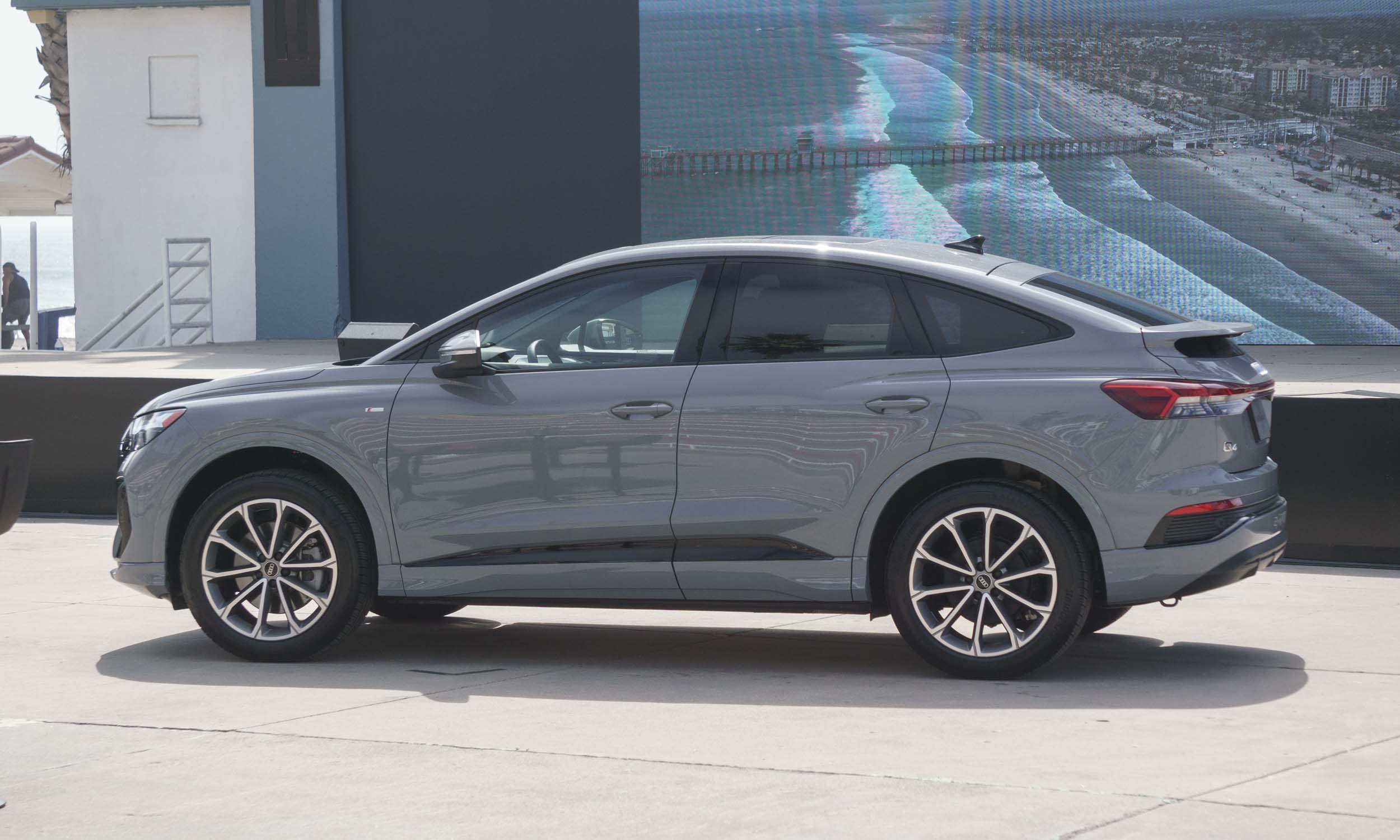 On the Road
While in Southern California, we spent a day behind the wheel of a 2022 Audi Q4 50 e-tron. As mentioned earlier, mechanically this vehicle is the same as the new 2023 model. With its smooth, quick acceleration, the Q4 e-tron is enjoyable to drive in a variety of conditions, providing its worth as an excellent everyday ride. 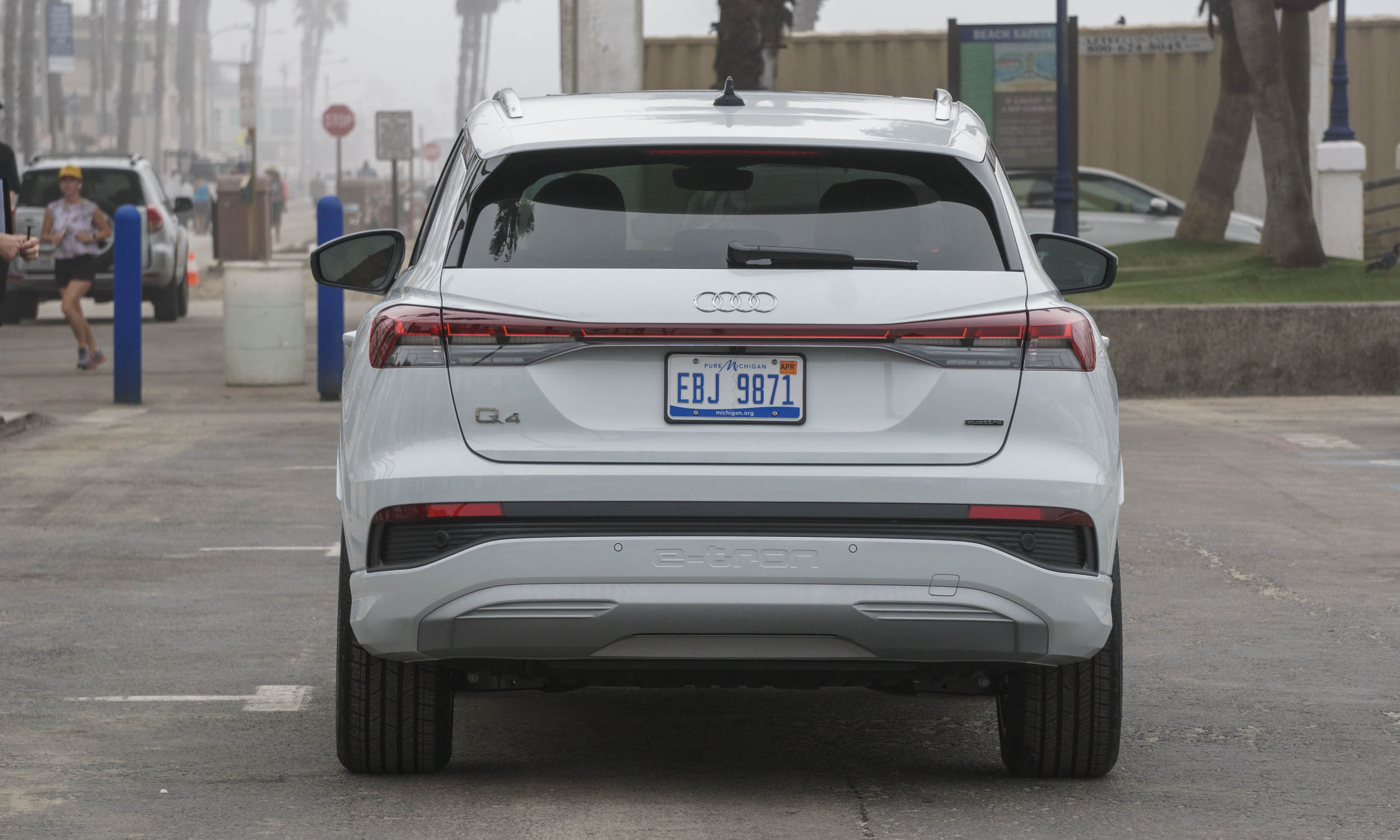 Cruiser
The Audi Q4 e-tron feels quick off the line, so accelerating to highway speeds is a breeze. Cruising at 80 mph also feels comfortable — a tribute to its German engineering. Even at highway speeds acceleration is strong, making passing on freeways or two-lane roads a breeze. The ride is solid and quiet, and with comfortable, supportive seats and a high-end audio system to provide ambient entertainment, the Q4 e-tron makes a great road trip vehicle — assuming there are charging stations available along the route. 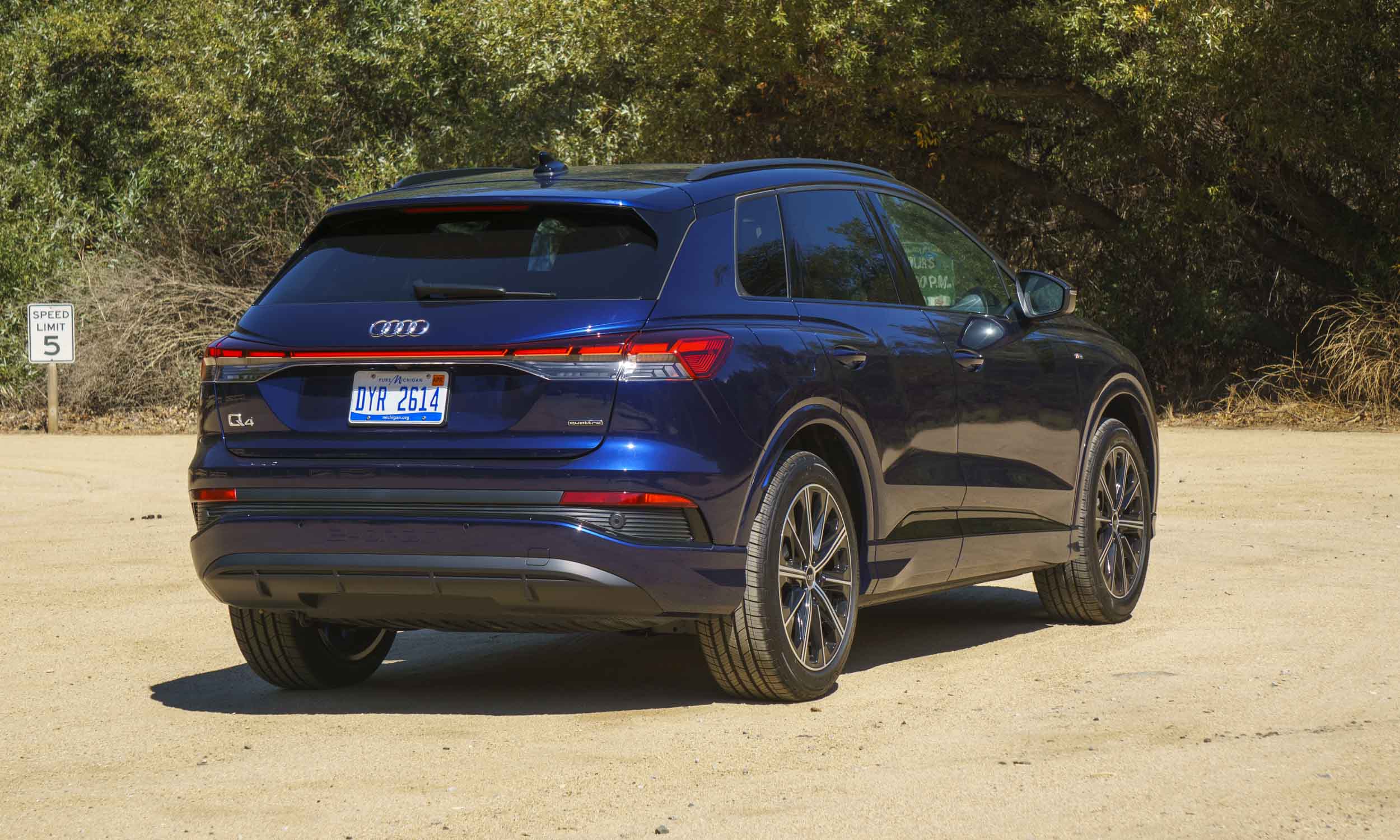 Good Fun
We didn’t have high expectations for the 2-row Q4 e-tron crossover as something that would be fun to drive, and so we were pleasantly surprised. And even though the vehicles do not possess one-pedal driving, we were able to adjust the regeneration to its highest level, making it possible to enter turns and slow the vehicle simply by lifting off the throttle without touching the brake. Steering is commendable, and with such high torque available immediately this crossover scoots out of corners. The quattro system keeps things on track even when pavement is suboptimal to provide a confident ride. Overall the Q4 is agile and sporty — words usually reserved for vehicles other than family SUVs. 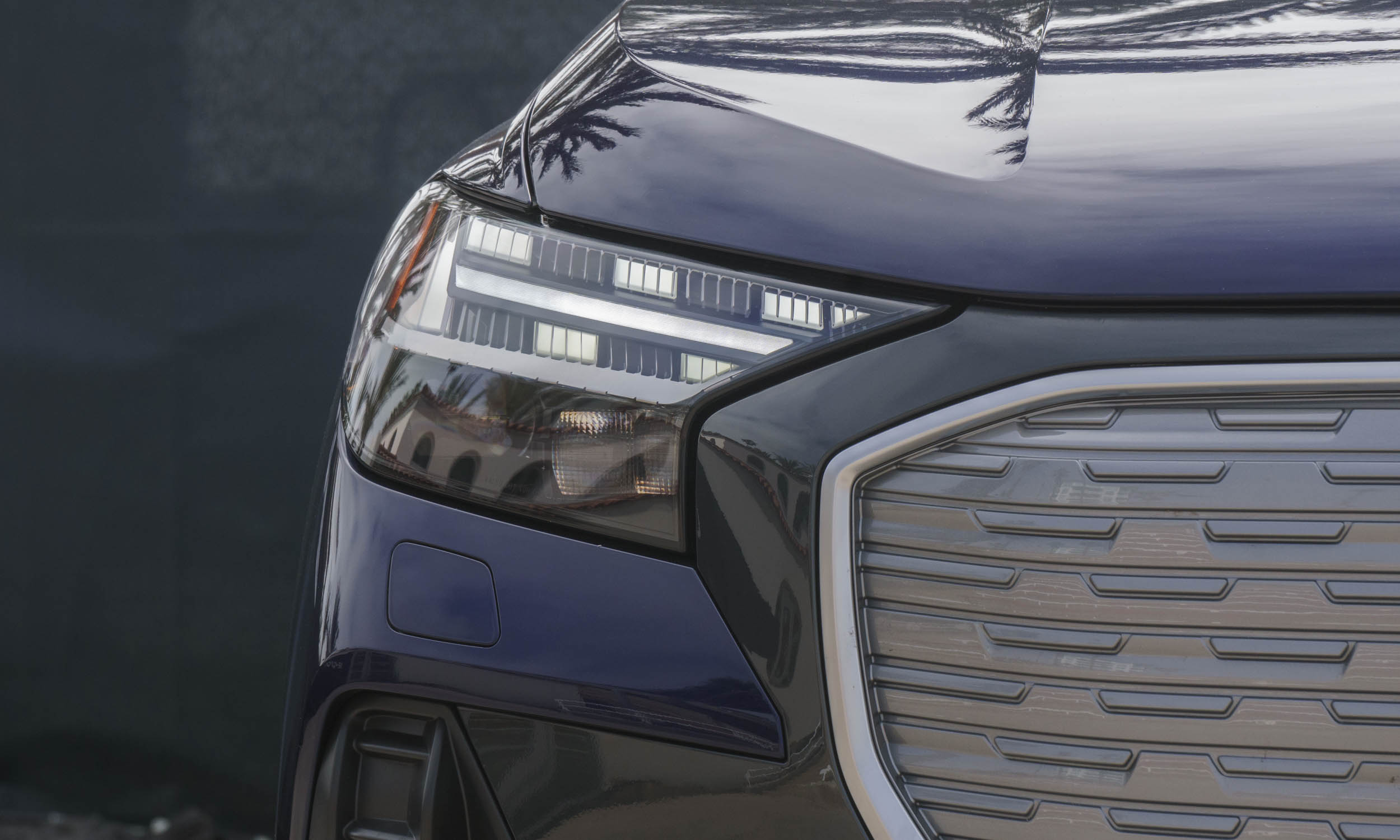 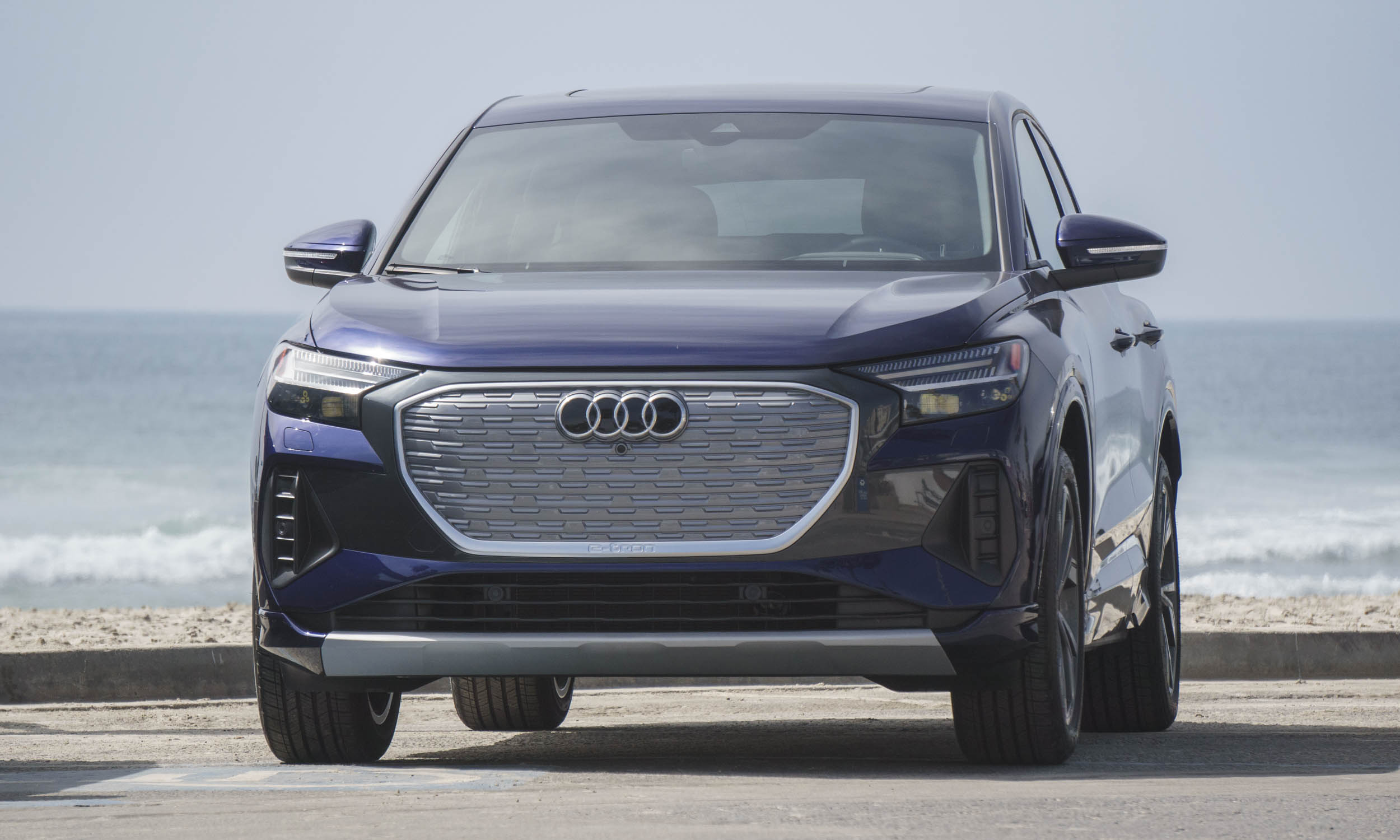 Right for You?
The variety and volume of electric cars sold in America continues to grow as consumers become more comfortable with EVs and the country’s charging infrastructure continues to progress. The Audi Q4 e-tron helps with that transition, since it acts and feels like a typical Audi Q4 with the additional benefit of its quiet, energetic and efficient electric powertrain. With the drivability expected of an Audi and the proper utility of an SUV, the Audi Q4 e-tron is an excellent choice for the first-time premium EV buyer. 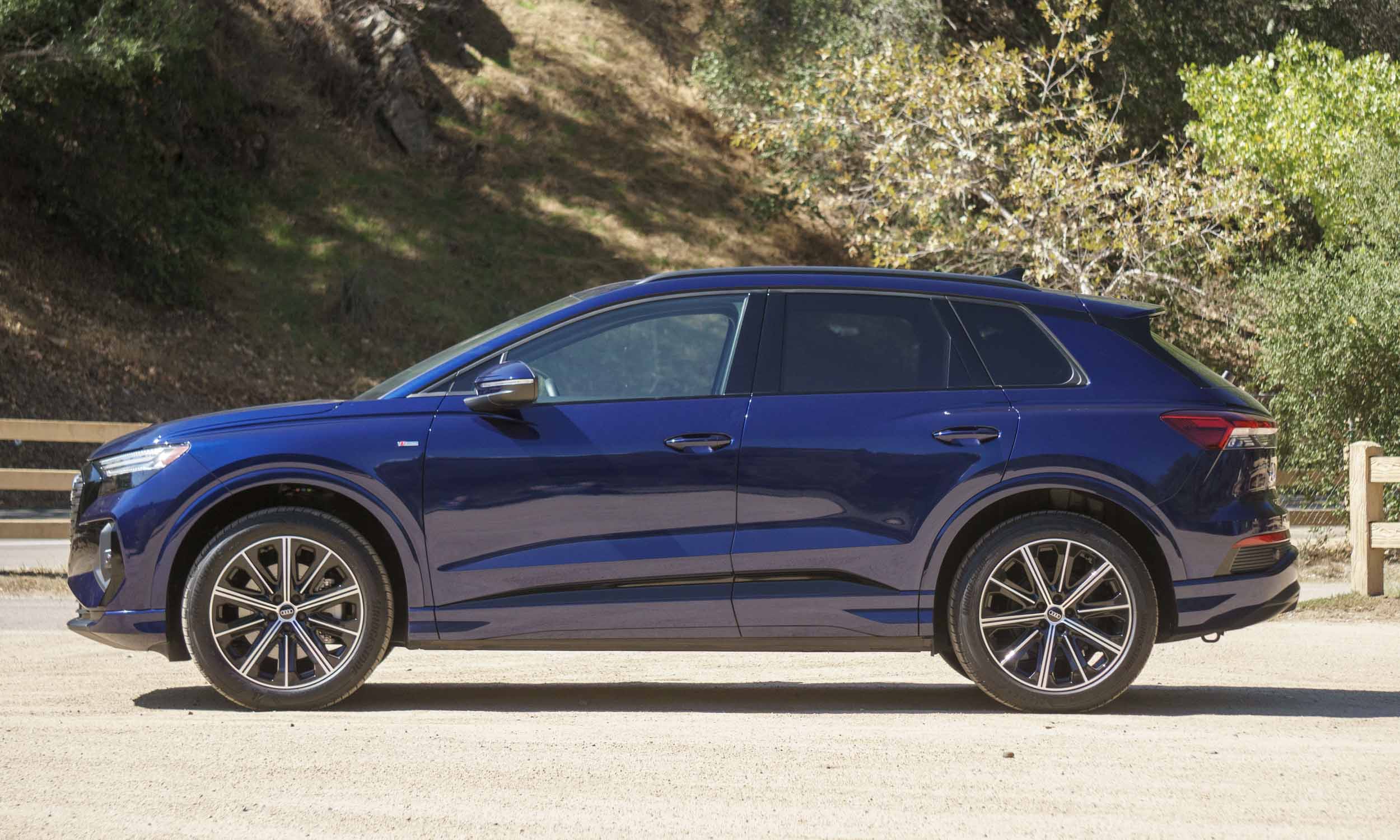 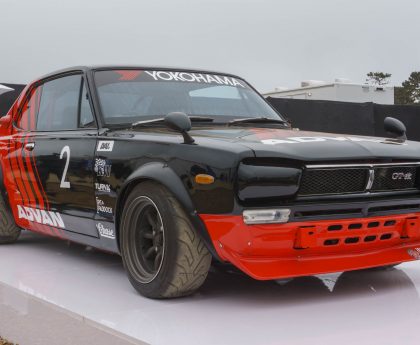 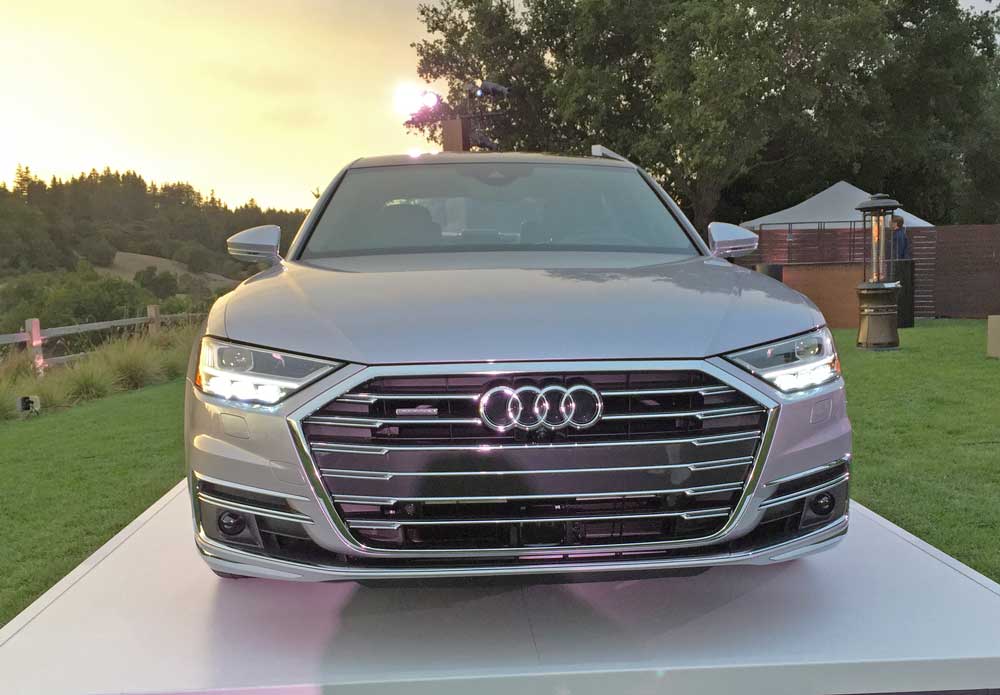