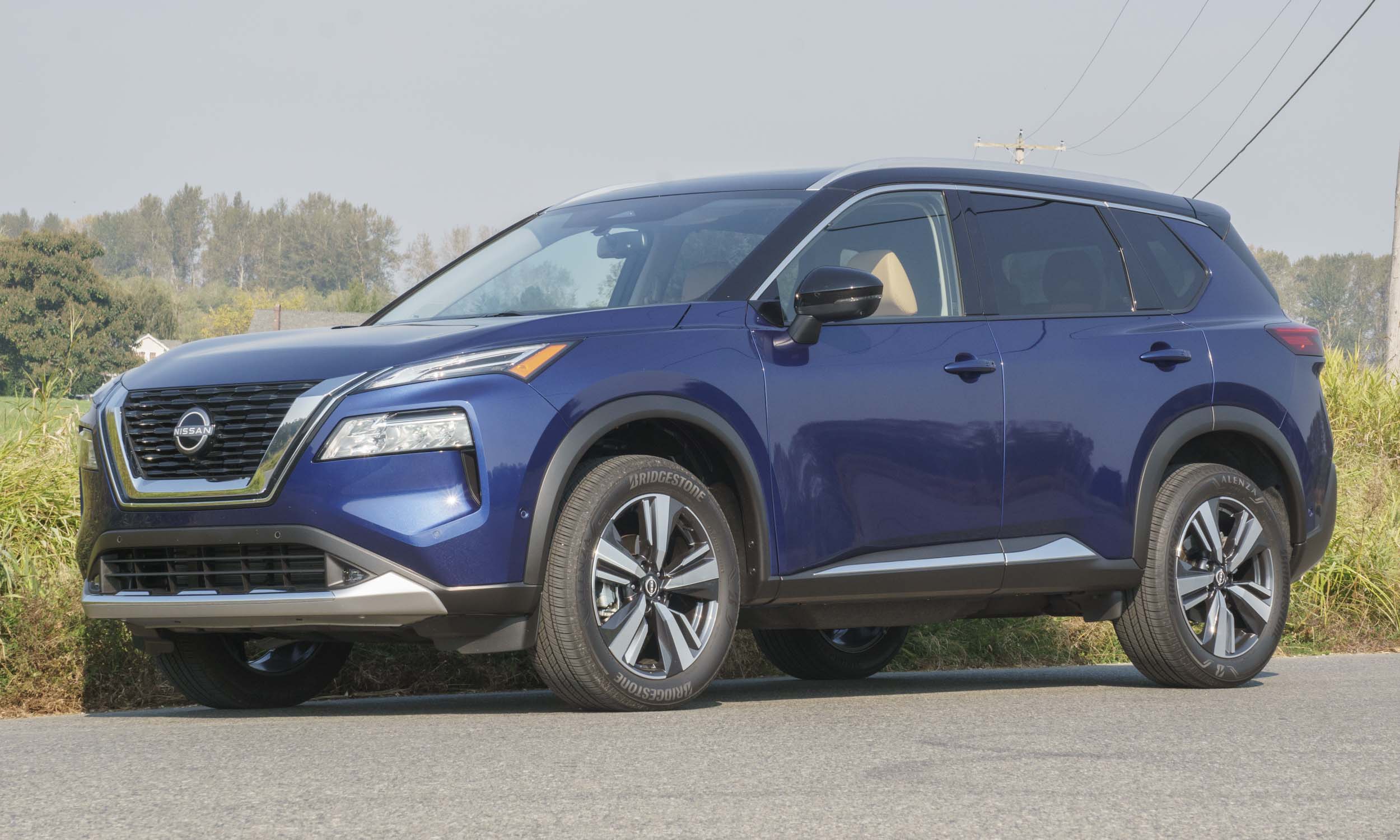 What Is It?
The Rogue is Nissan’s contender in the competitive five-passenger crossover segment. This popular small SUV was completely redesigned last year. As Nissan’s best-selling model, the Rogue represents more than a quarter of the brand’s U.S. sales this year and maintains a recurring role as one of the best-selling SUVs in America. Built on a new platform with fresh styling, advanced safety features and a family friendly interior, the 2022 Nissan Rogue should continue to satisfy customers as one of the most popular SUVs in America. Let’s take a look. 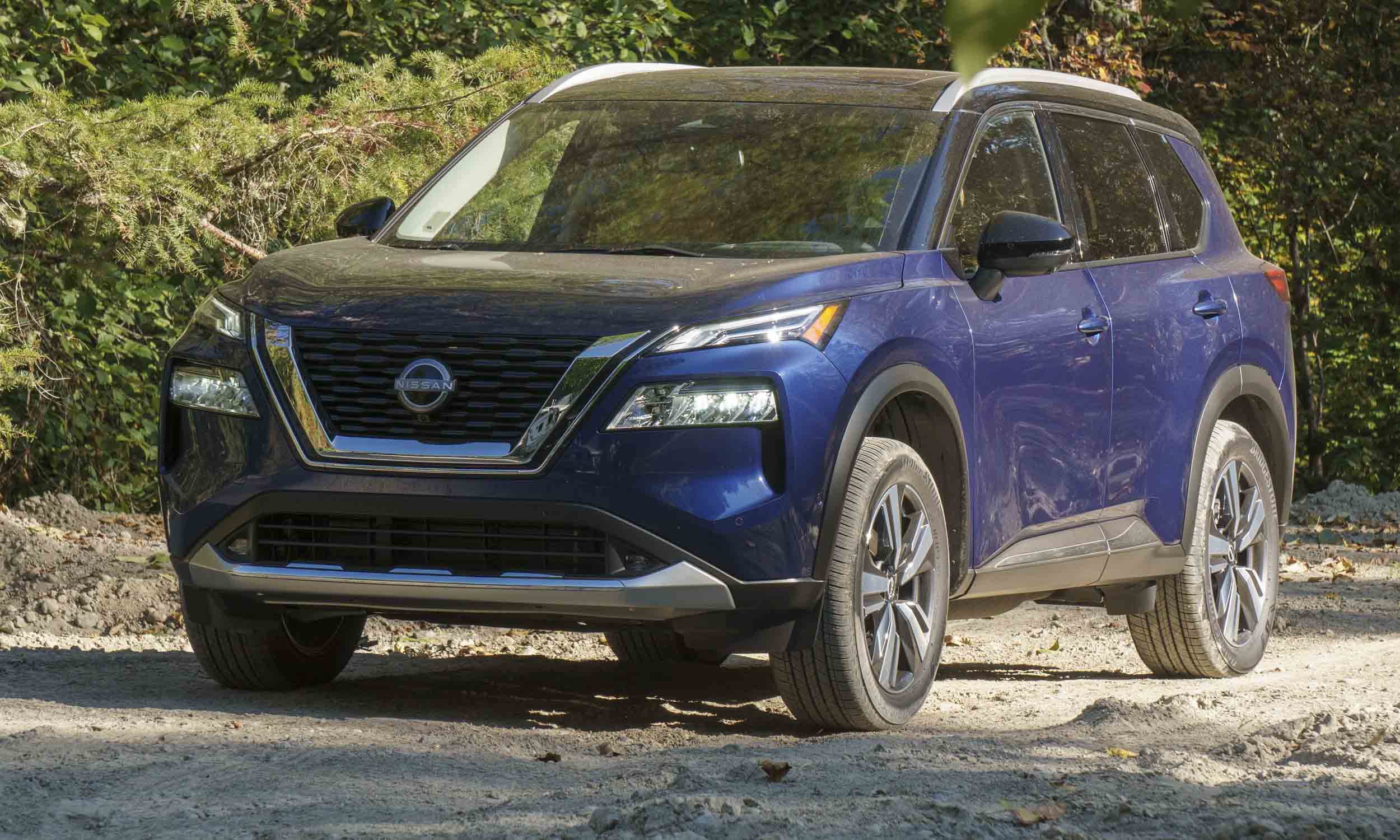 Test Vehicle
The Japan-based automaker provided us with a 2022 Nissan Rogue Platinum AWD painted in two-tone Caspian Blue Metallic / Super Black. The Platinum is the top-level trim of the Rogue lineup, so almost everything Nissan offers comes as standard equipment on this model. The test vehicle arrived with a few extras including a head-up display, external ground lighting and illuminated kick plates for a total MSRP of $41,930. Competitors to the Rogue are numerous and include the Toyota RAV4, Honda CR-V, Subaru Forester, Ford Escape and Chevrolet Equinox. 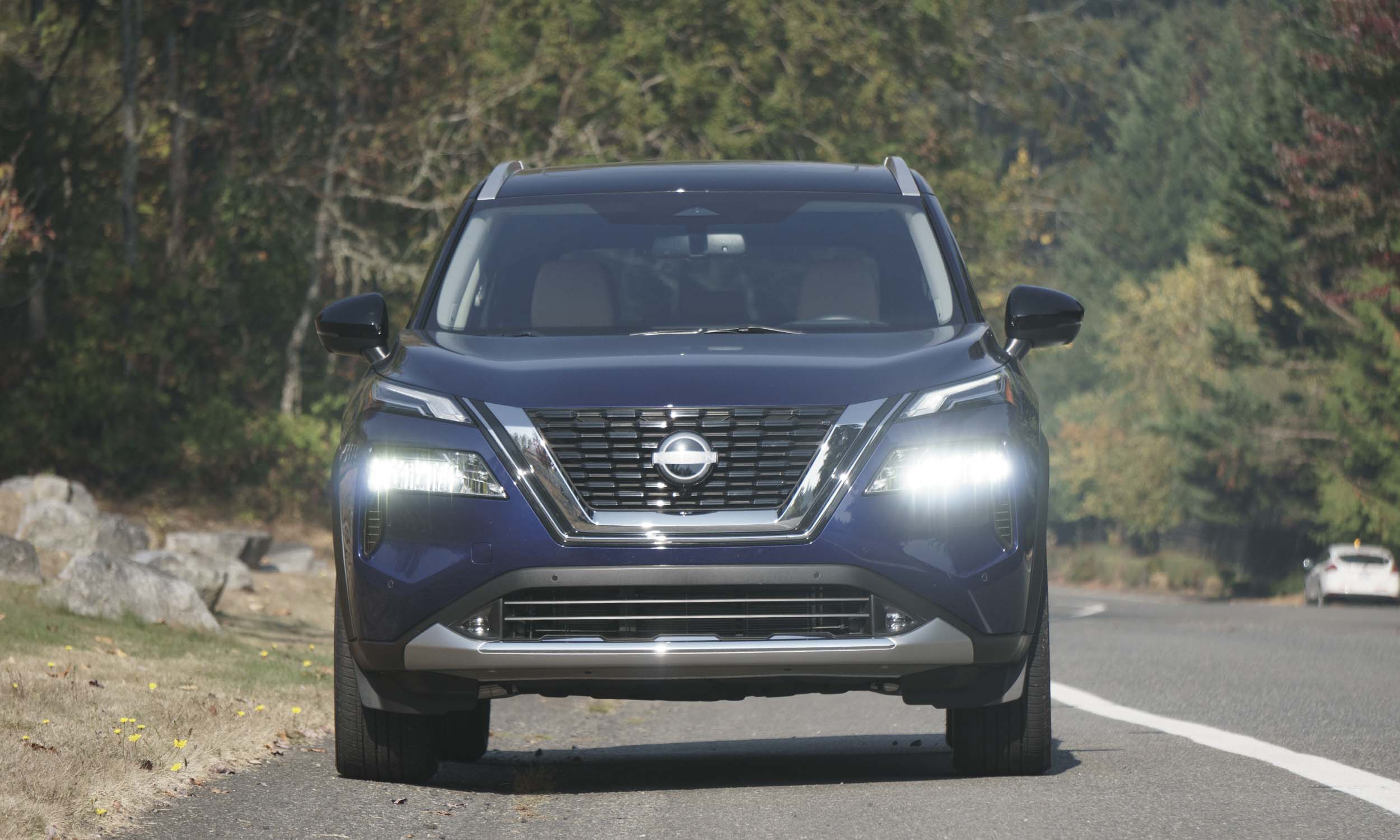 Styling
When Nissan updated the Rogue’s design last year, the company moved away from the vehicle’s previously “rounded” styling aesthetic, instead employing a more classic SUV design with a bold vertical grille, strong fender flares and a squared-off tailgate. Like the rest of Nissan’s vehicle lineup, Rogue still features the familiar V-Motion grille. Unique multilevel LED headlights give the compact crossover a distinctive look. LED running lights flow into the hood, while the main headlights take positions below and beside the grille. 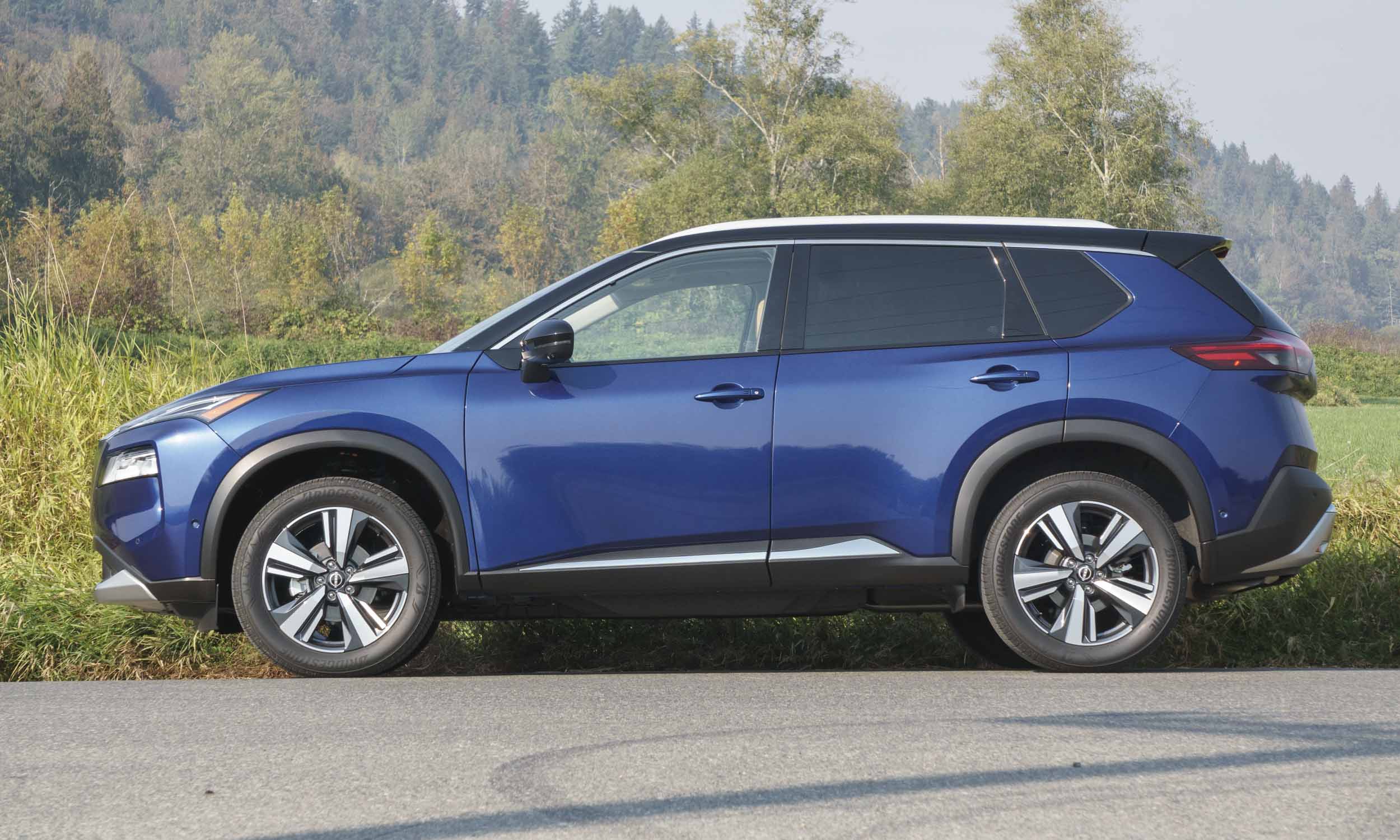 Strong Stance
The 2022 Nissan Rogue has a stocky, strong stance, sitting lightly lower and broader than its predecessor. Even with its classic squared ends, the small crossover’s roofline flows smoothly down from the windshield to the rear hatch. Nissan refers to this as a floating roof design. 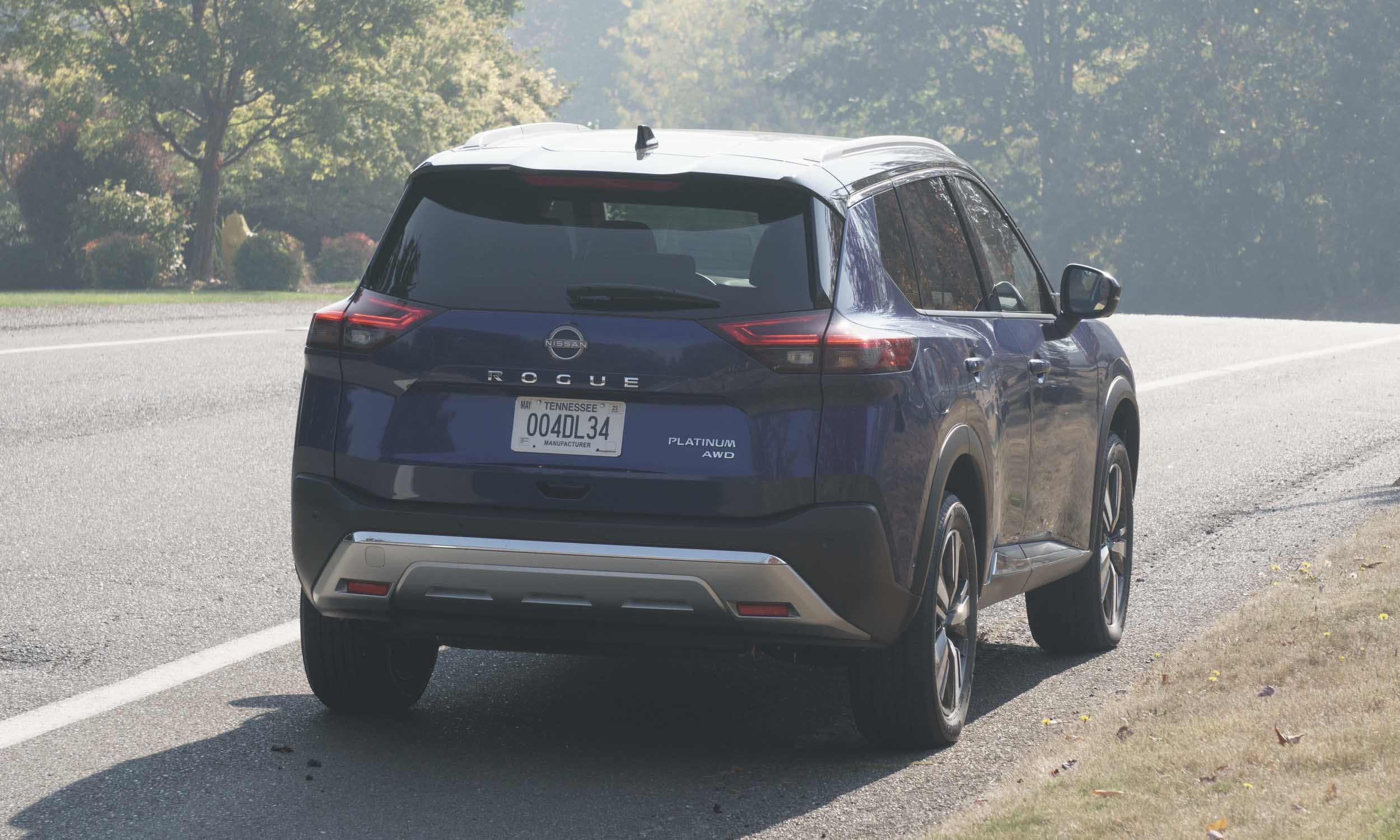 Rear View
The rear hatch of the 2022 Nissan Rogue has a chiseled look that matches the rest of the vehicle — the large ROGUE nameplate in large letters is a nice touch. 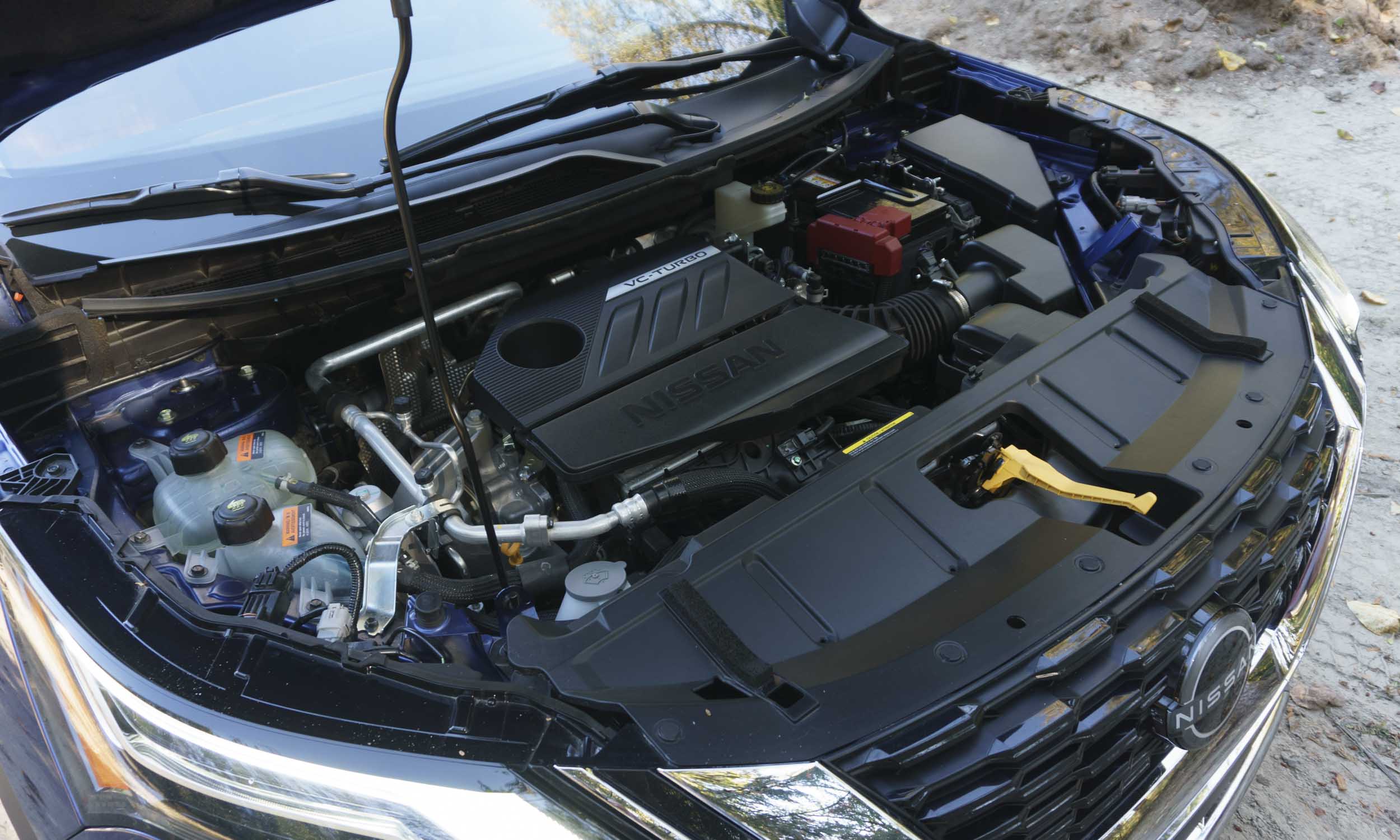 Under the Hood
Powering the Rogue Platinum is Nissan’s innovative 1.5-liter VC-Turbo engine that delivers 201 horsepower and a healthy 225 lb-ft of torque. Power gets sent to all four wheels via a new generation Xtronic continuously variable transmission. According to U.S. EPA fuel-economy estimates, the Rogue Platinum AWD is rated at 28 mpg city / 34 mpg hwy / 31 mpg combined — respectable figures for an AWD crossover. 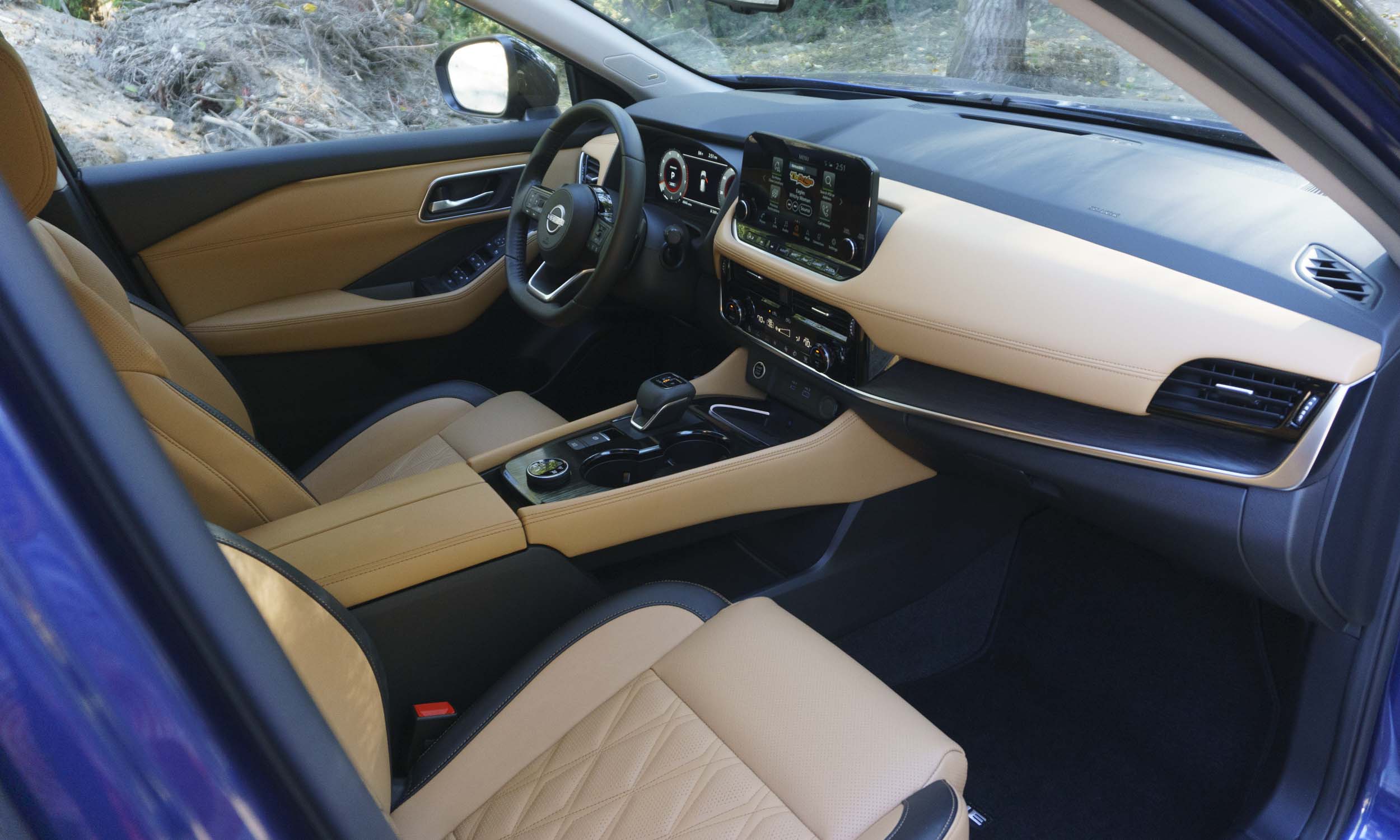 Inner Space
With the recent Rogue redesign, Nissan freed up more interior space by introducing a new electronic shifter. In addition to larger, centrally located cupholders, the interior has significant space beneath the shifter as well as a center console with “butterfly” doors allowing easier access. Multiple USB ports provide power, and a wireless charger is available. 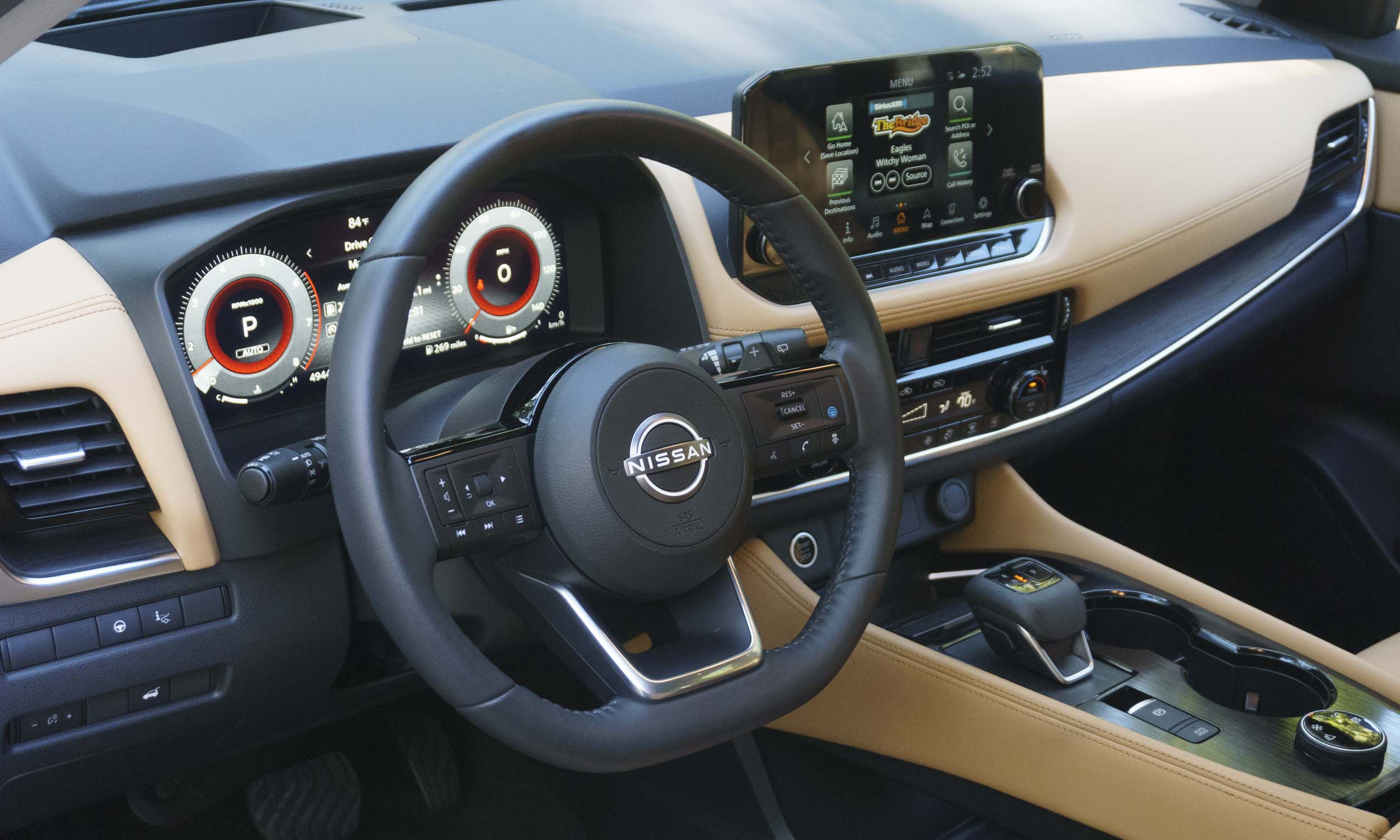 High Tech
The Rogue Platinum we drove featured a 12.3-inch digital driver display, a 10.8-inch head-up display as well as a 9.0-inch infotainment screen, giving the small crossover a high-tech vibe. The center screen is easy to read, and we appreciate the volume and tuning knobs as well as buttons below the screen for quick access to audio, communications and the main menu. Climate controls are separate from infotainment and thus readily accessible. Android Auto and Apple CarPlay are standard on all Rogue trims. 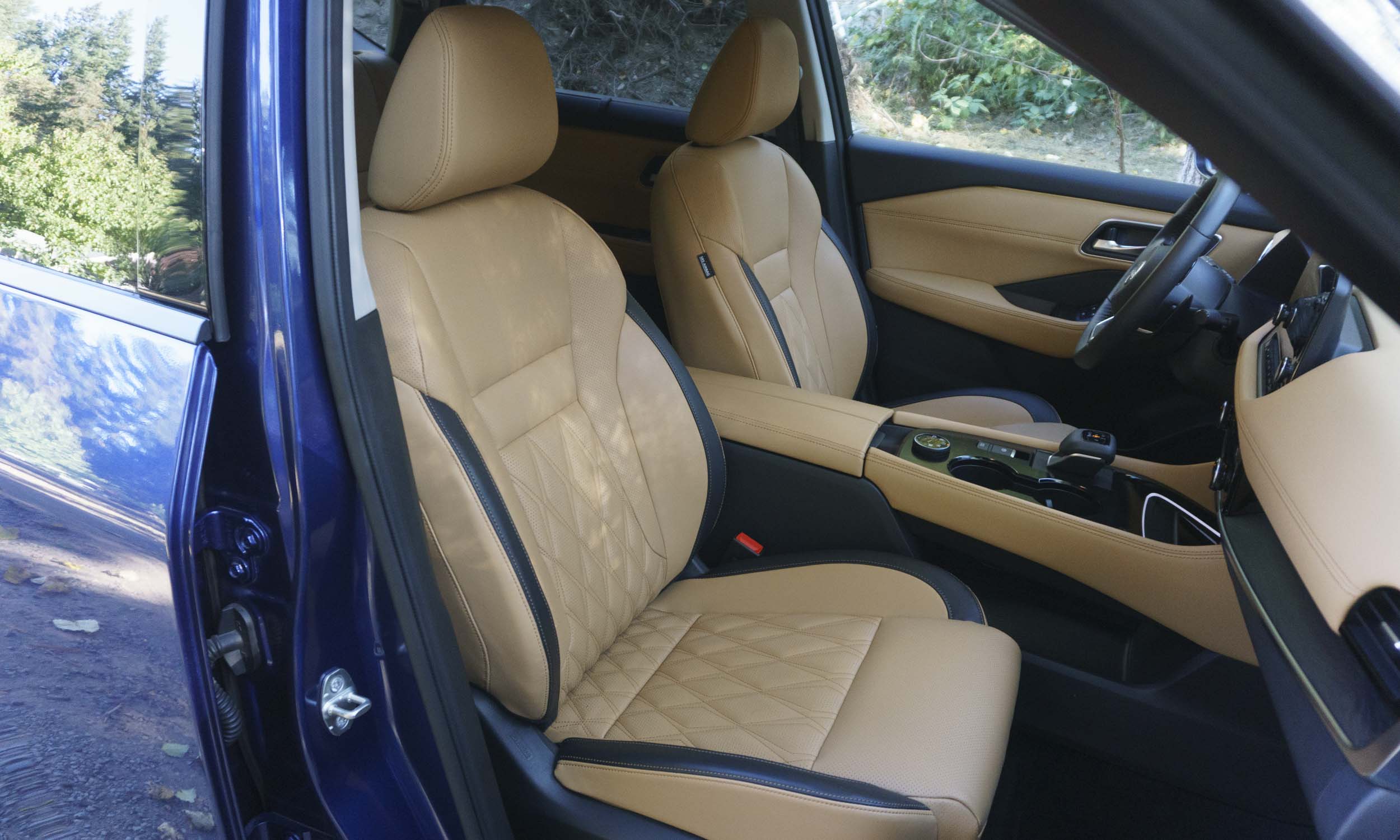 Front Seats
Like other Nissans, Rogue features Zero Gravity seats up front that offer generous support and comfort after long stints behind the wheel. The Platinum features seats trimmed in quilted semi-aniline leather that are both stylish and comfortable. 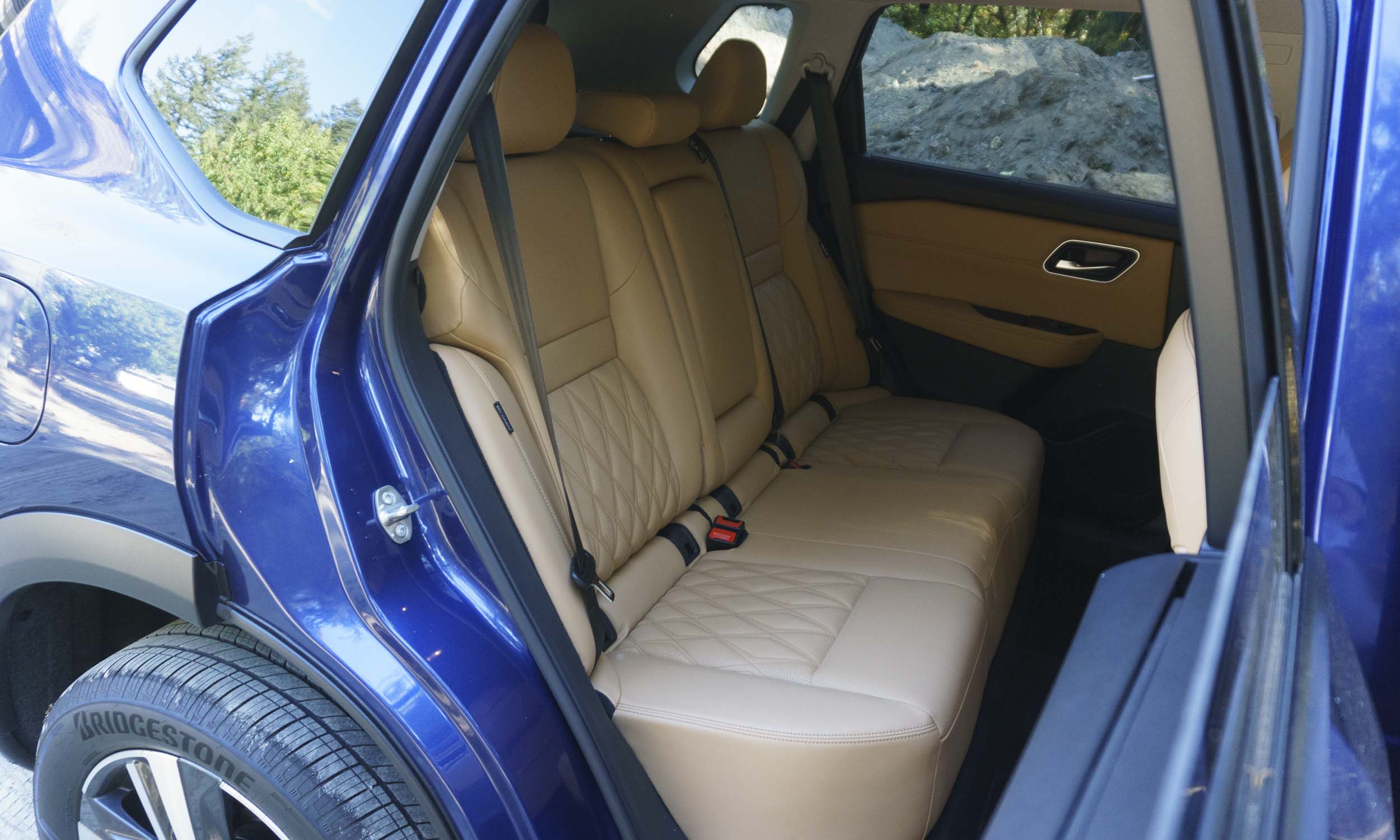 Rear Seat
The rear seat of the Nissan Rogue gets a surprising amount of legroom — even the middle seat does not feel cramped. The seats are the same Zero Gravity design and they recline for additional comfort. Rear doors can open almost 90 degrees to provide easy access to the rear seat. 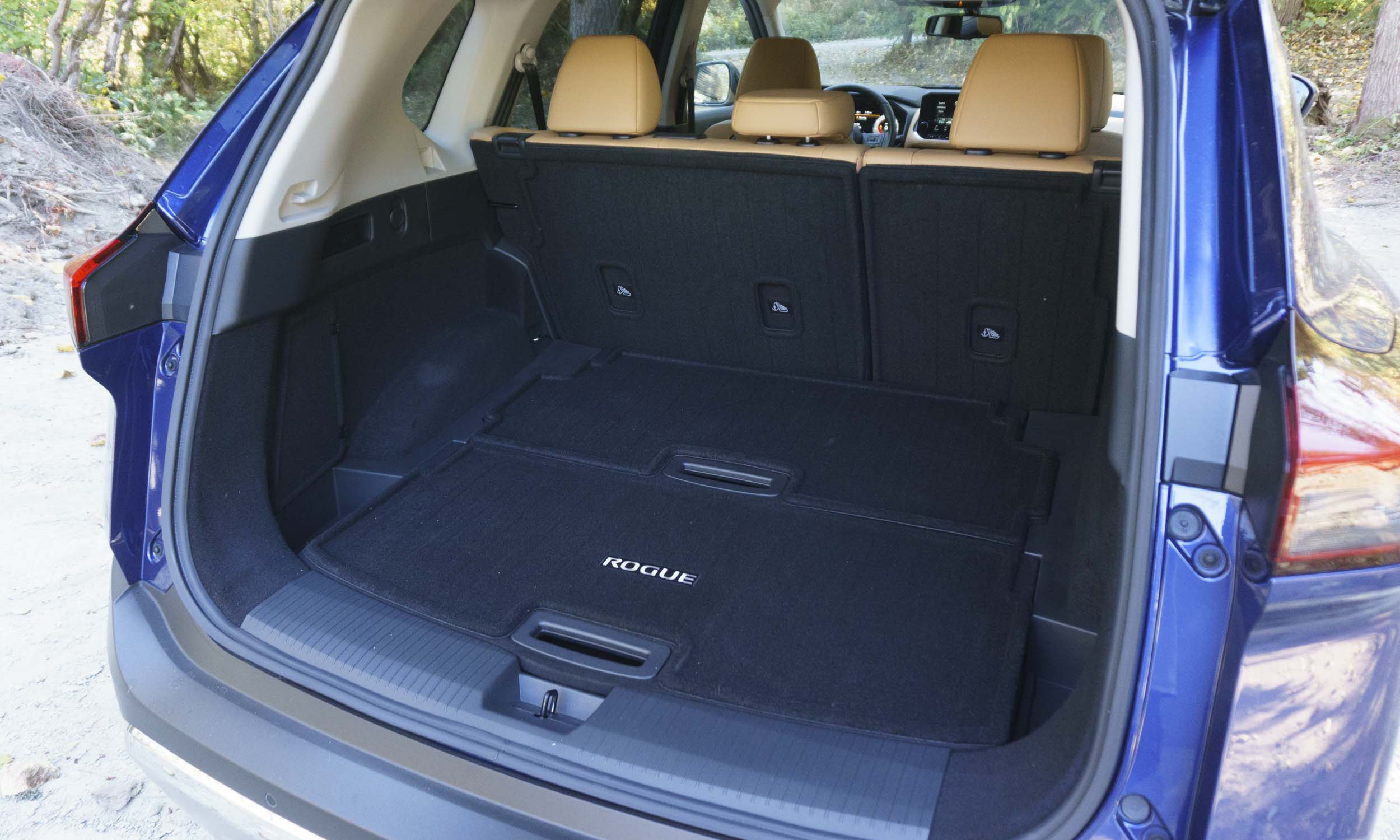 Cargo Space
The Rogue offers a spacious cargo area that can be extended dramatically with the second row folded flat. Cubbies behind either wheel accommodate small items, so they don’t roll around. The right-side cubby is specifically designed to snugly hold a gallon jug of milk (or other beverage) — based on an engineer’s experience spilling milk all over the cargo area of her previous-generation Rogue. Many vehicle owners have experienced this unfortunate occurrence, so we love it when engineers incorporate practical solutions from real-life experiences. 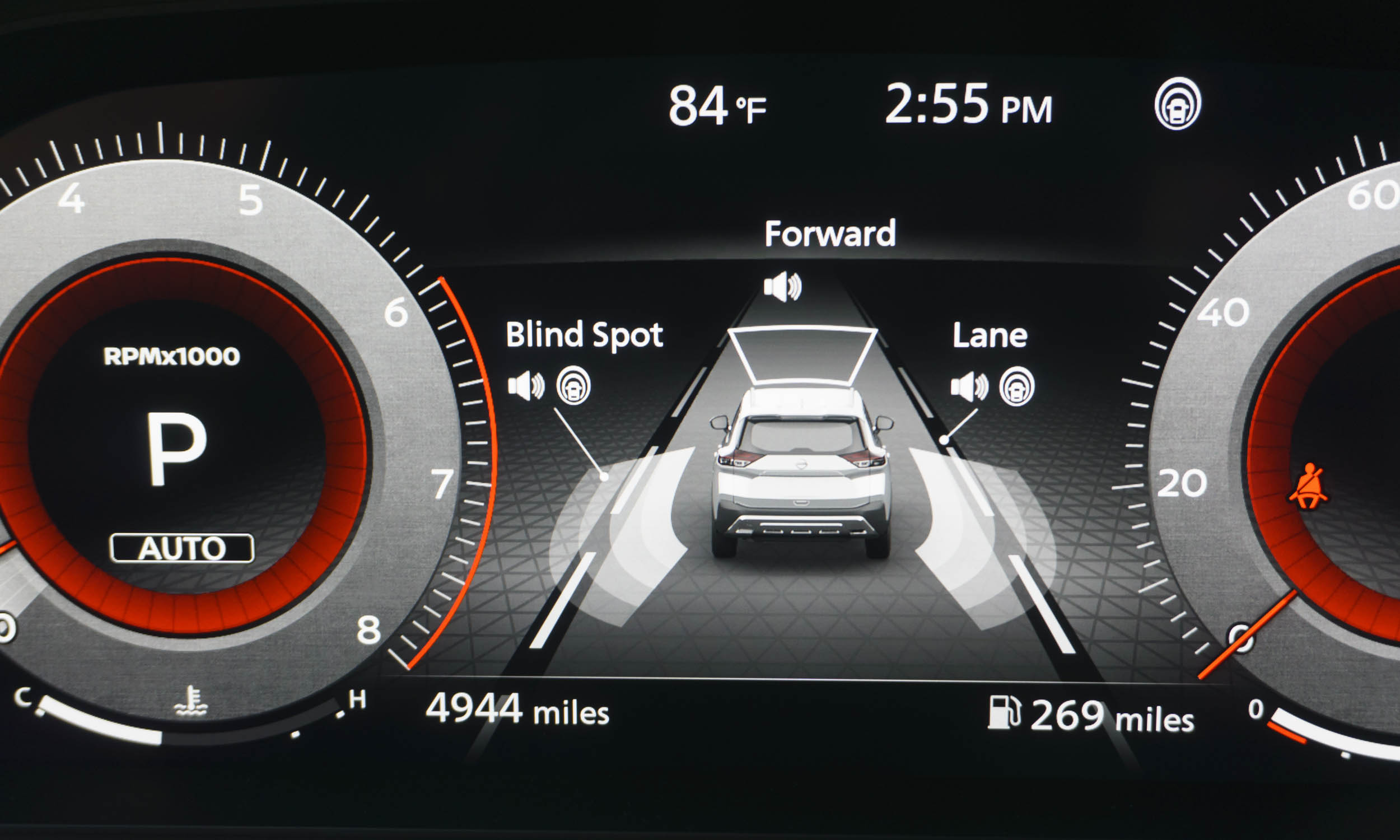 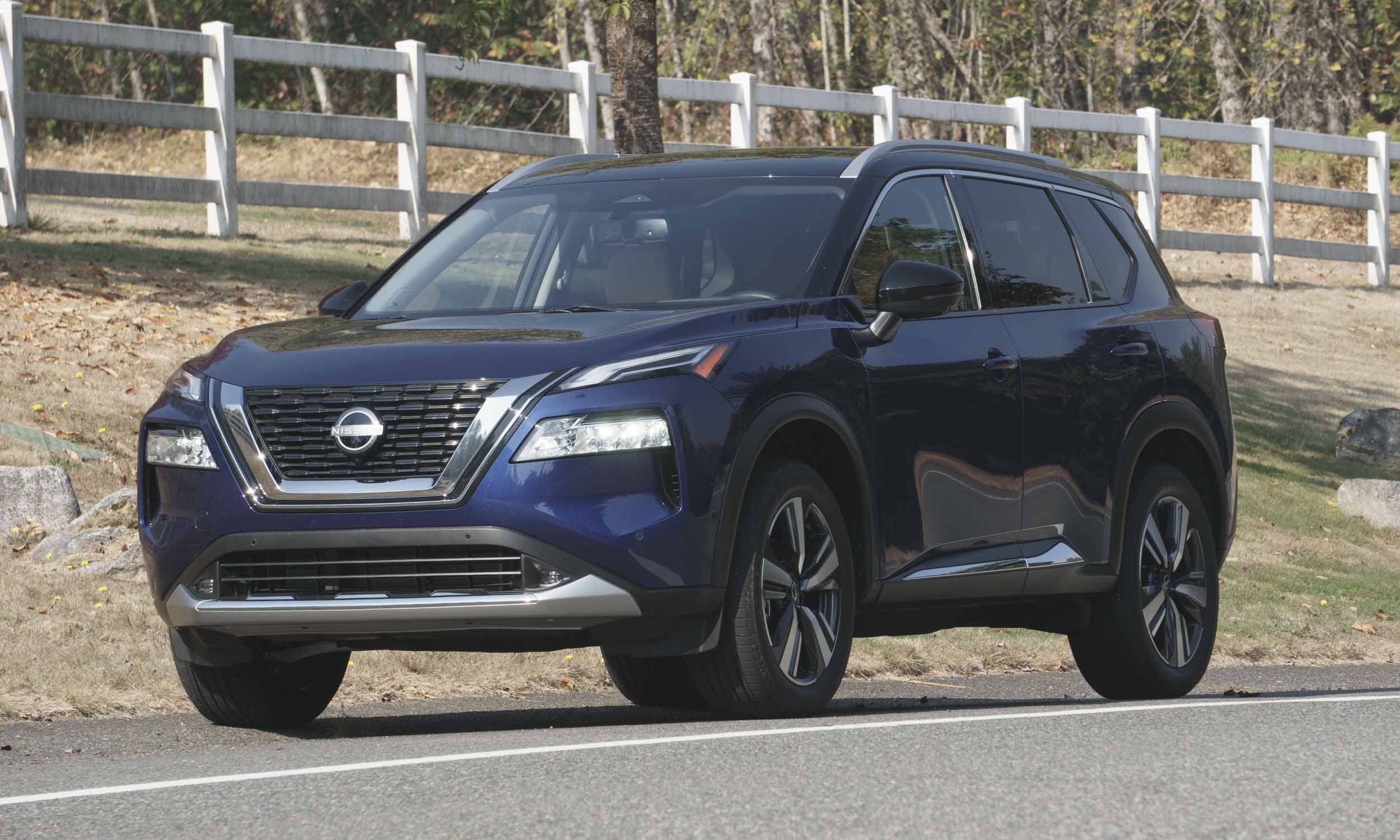 On the Road
The Nissan Rogue delivers a solid performance with notable power thanks to the VC-Turbo engine. Typically we are not fans of CVTs, but we were pleasantly surprised at how well Nissan’s Xtronic transmission works, even delivering pseudo shifts under hard acceleration. Acceleration from a standstill is commendable, with the vehicle never seeming to lack power. 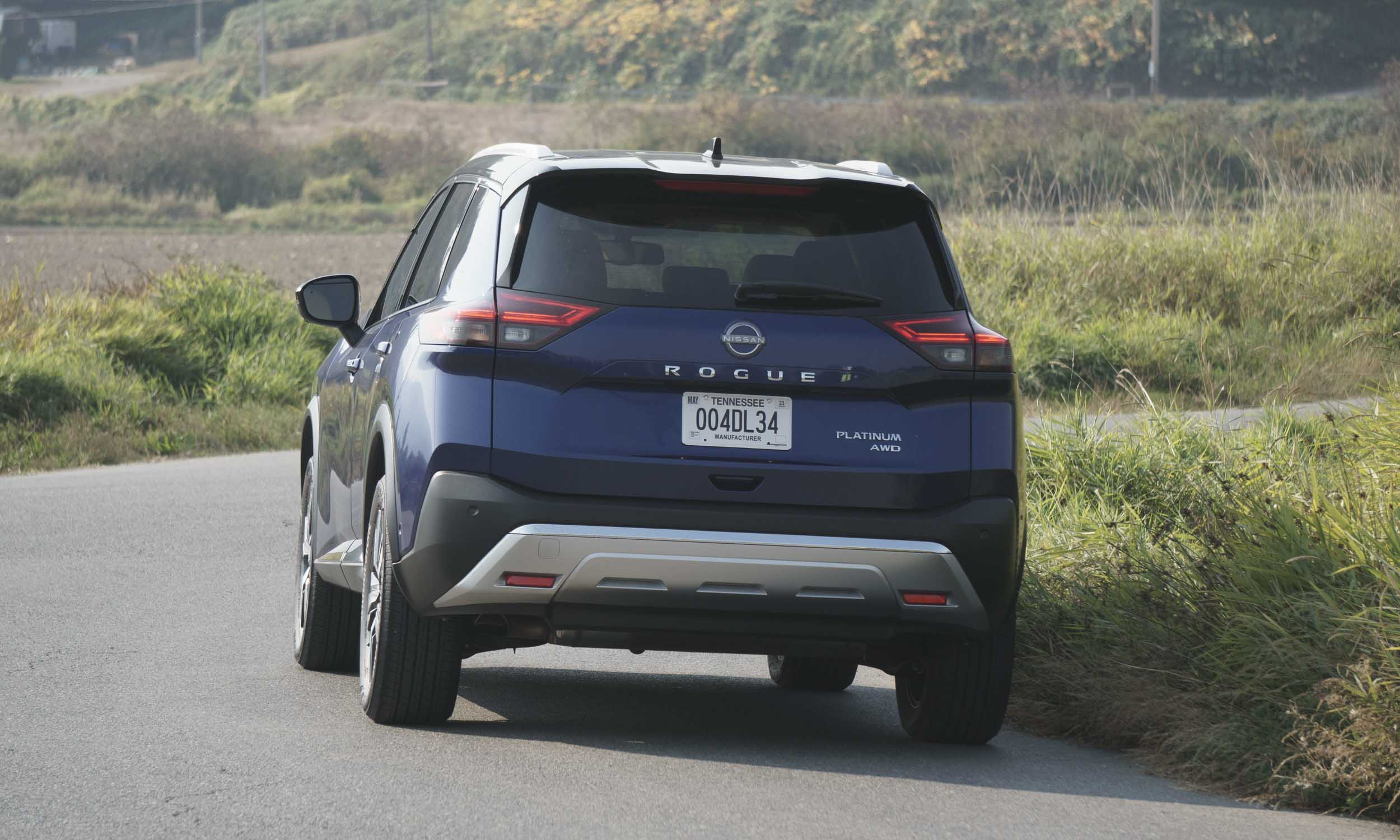 Comfortable Cruiser
Overall the Nissan Rogue has a quiet ride — rough roads can be a bit noisy, but nothing we’d consider annoying. At higher freeway speeds the Rogue feels confident and comfortable — not at all like an entry-level crossover. The steering is precise with decent feedback, making Rogue enjoyable to drive whether cruising the highway or pushing it through winding roads in the Pacific Northwest. 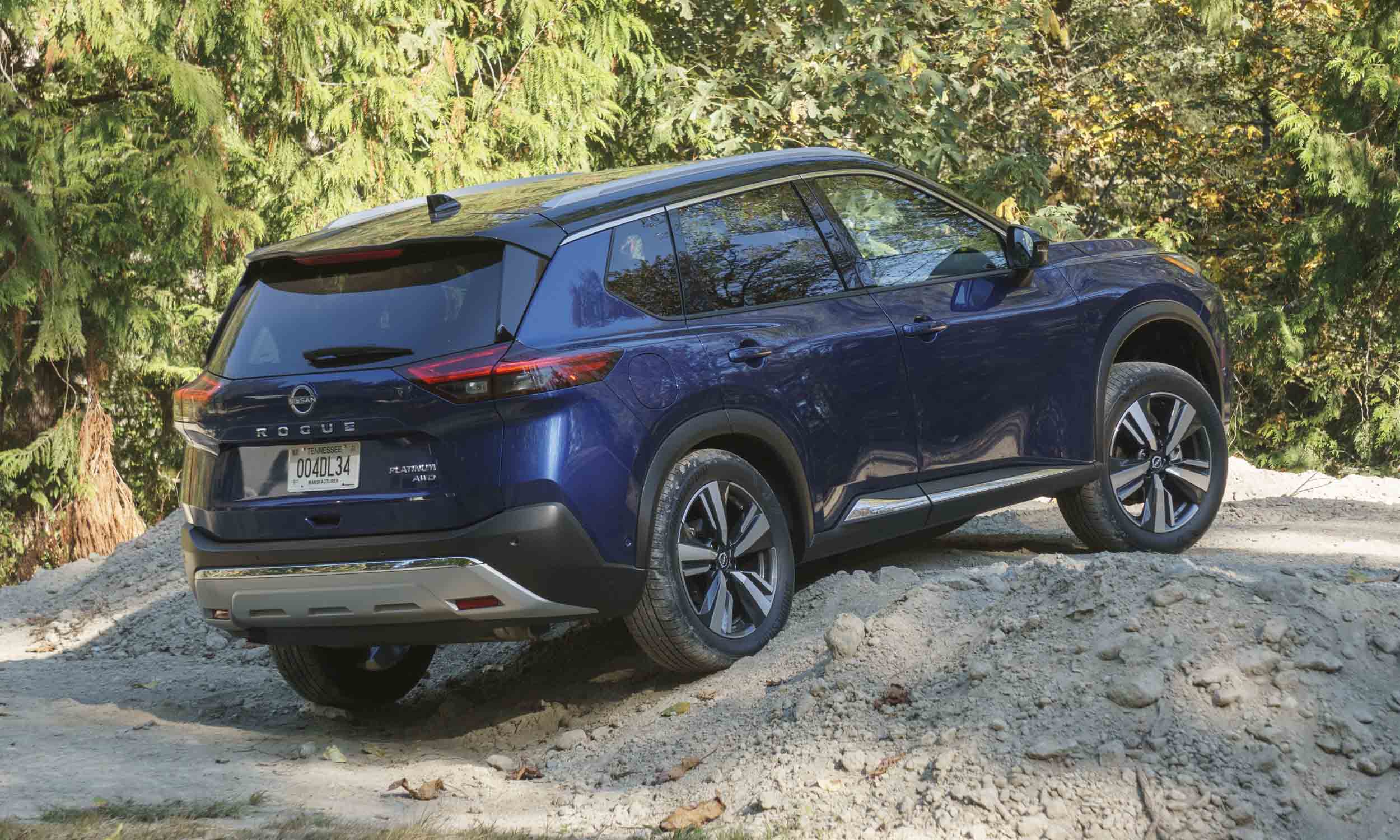 Off-Road
Most owners are unlikely to take the Rogue off the pavement, although on our test drive we had the opportunity to test the small crossover’s capability and came away impressed. Selecting off-road mode from the drive mode dial in the center console, we climbed a few steep berms and discovered the Rogue transfers power quickly to wheels with traction, taking us through some rough stuff with little drama. 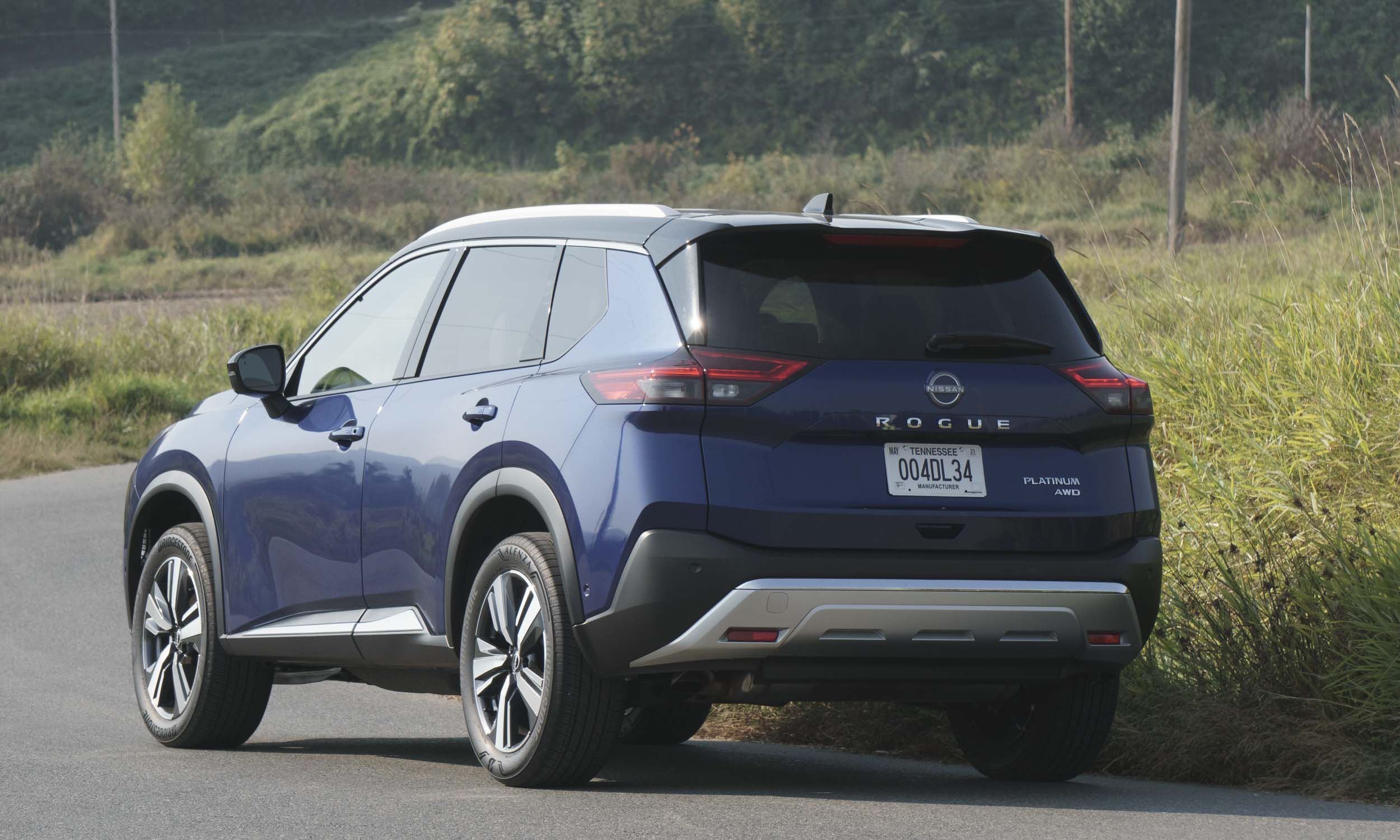 Rating: 8.5
The small crossover market is one of the most competitive segments in America, but the 2022 Nissan Rogue easily holds its own against the competition. The Rogue stands out from the crowd with a bold exterior complemented by the signature LED headlights and a stylish, comfortable and roomy interior. Add in the impressive performance and efficiency of the VC-Turbo engine, as well as the enjoyable driving characteristics, and this Rogue is easily destined for continued success. 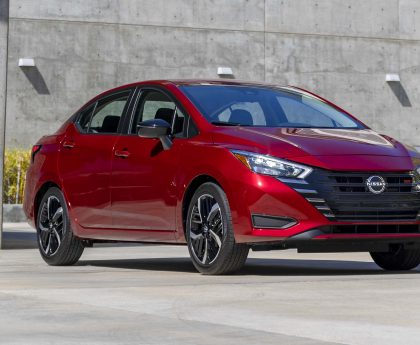