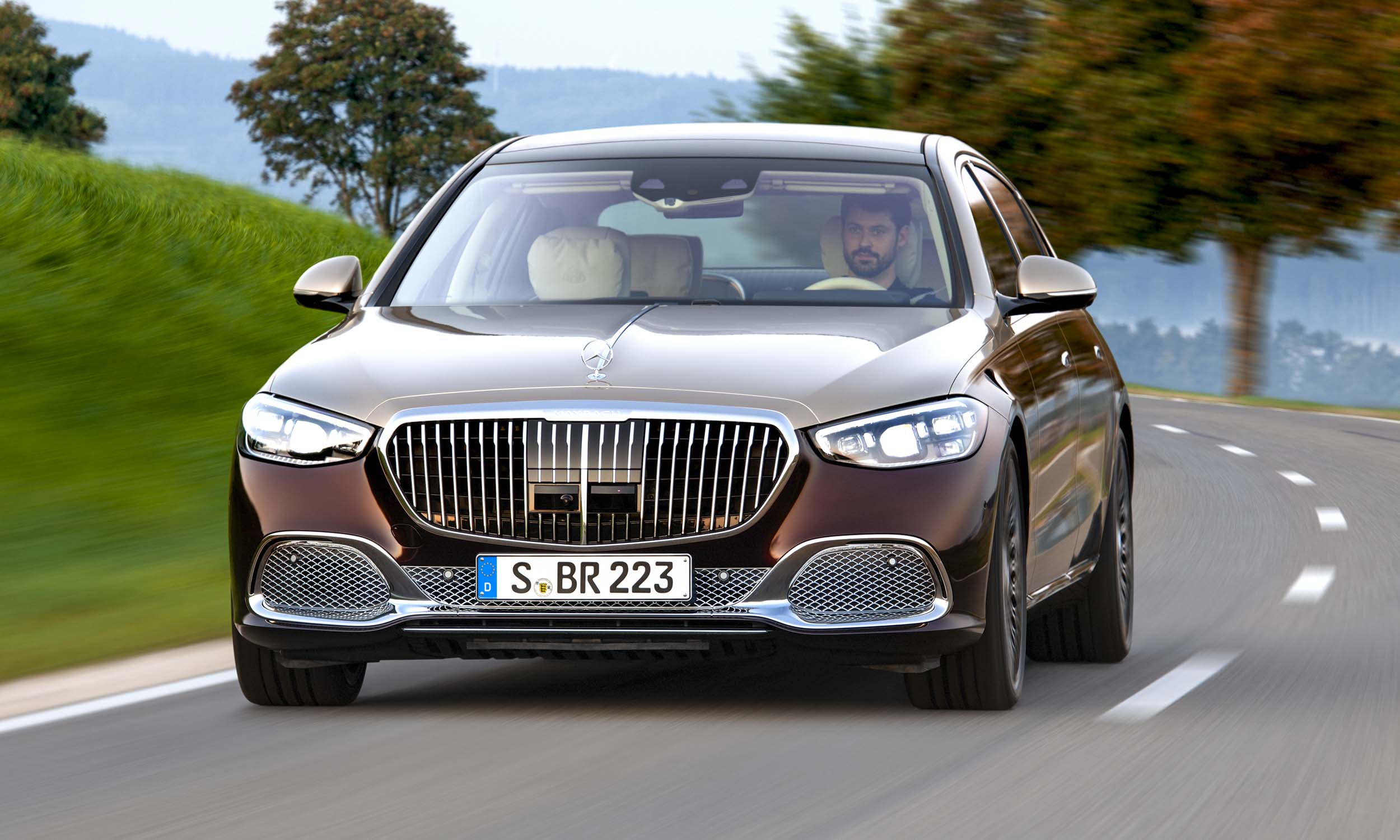 Raising the Bar
For decades Mercedes-Benz has been setting the bar for modern luxury sedans with its flagship S-Class, and the relatively recent addition of ultra-luxurious Maybach variants. Today the German automaker raises that luxury bar considerably with the introduction of the top-level Maybach — the Mercedes-Maybach S 680. With elegant styling, a lavish interior and a powerful V12 engine under the hood, the 2022 Mercedes-Maybach S 680 takes its rightful place at the pinnacle of Mercedes luxury. 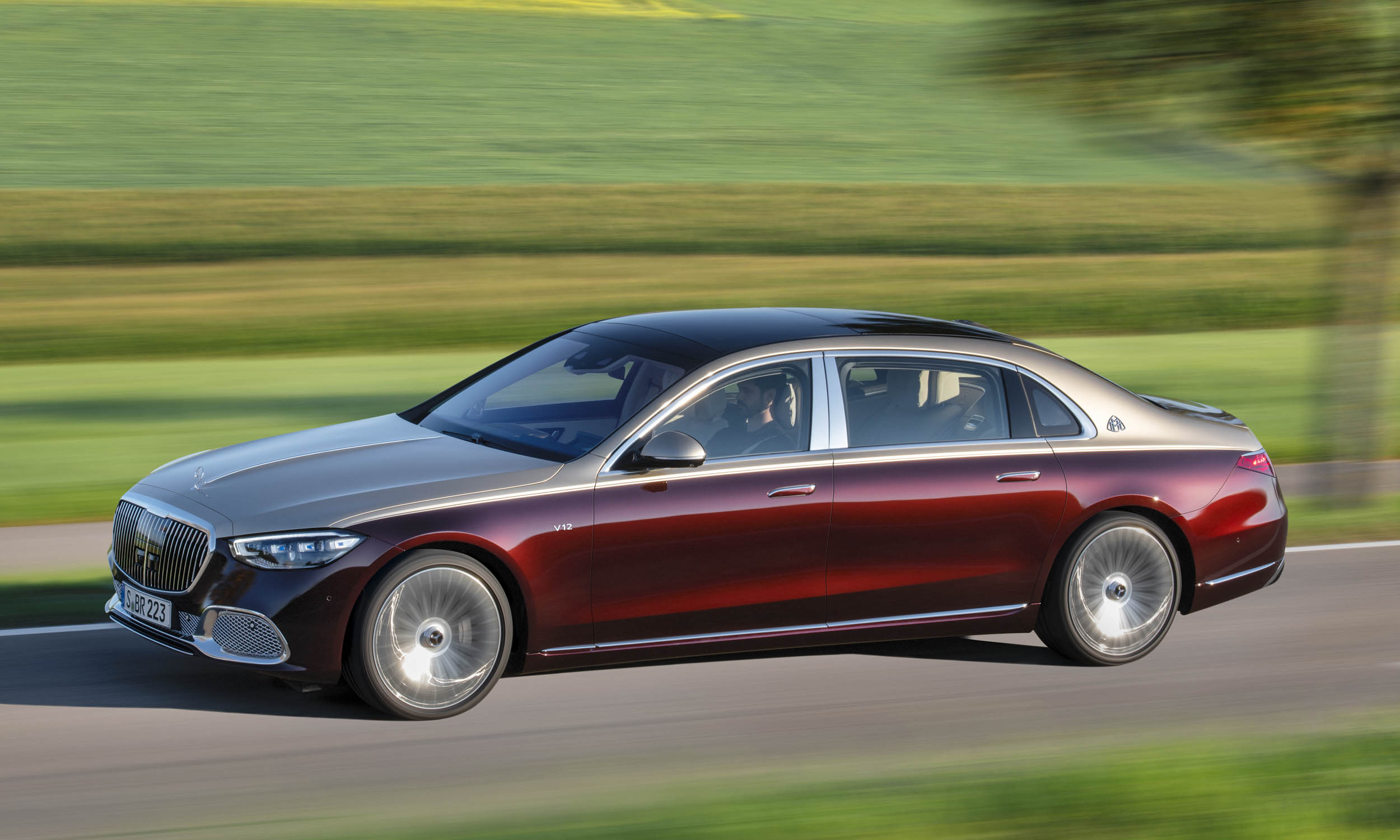 Unique Look
Mercedes-Benz recently introduced an all-new S-Class, and the Maybach lineup takes that new design and adds unique touches to create a luxury car of even more lavish distinction. Exclusive Maybach design cues include a grille with Maybach lettering and vertical three-dimensional trim strips; a chrome trim strip in the center of the hood; and a unique front bumper design with black mesh or optional chrome mesh. Riding on a wheelbase 7 inches longer than the standard S-Class, the Maybach S-Class has longer rear doors, a more upright C-pillar and an illuminated Maybach emblem on those pillars. 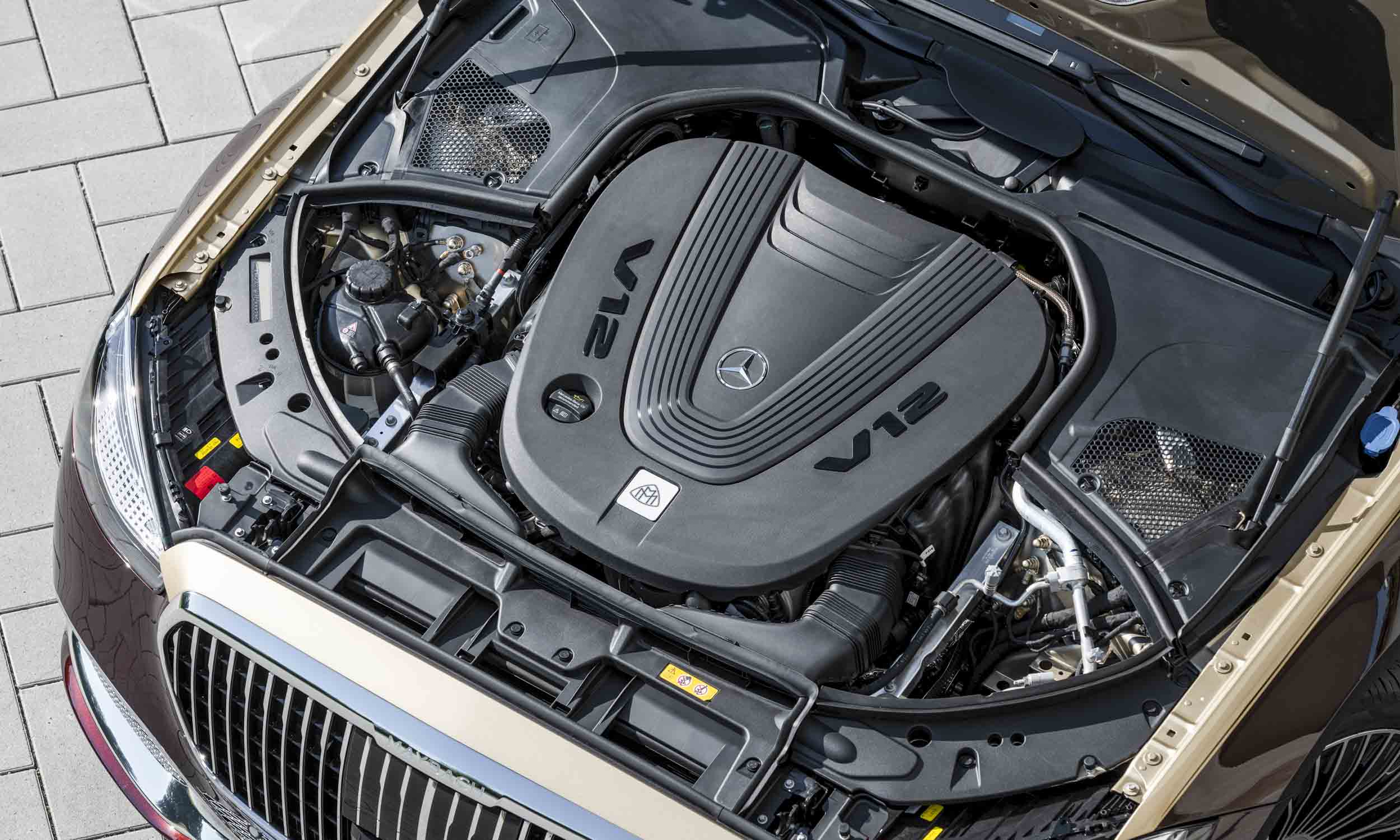 V12 Power
The most powerful model in the German automaker’s lineup, the 2022 Mercedes-Maybach S 680 boasts a 6.0-liter biturbo V12 engine producing 621 horsepower and an astounding 738 lb-ft of torque. With that much power on tap, this incredibly large sedan sprints to 60 mph in a mere 4.4 seconds. 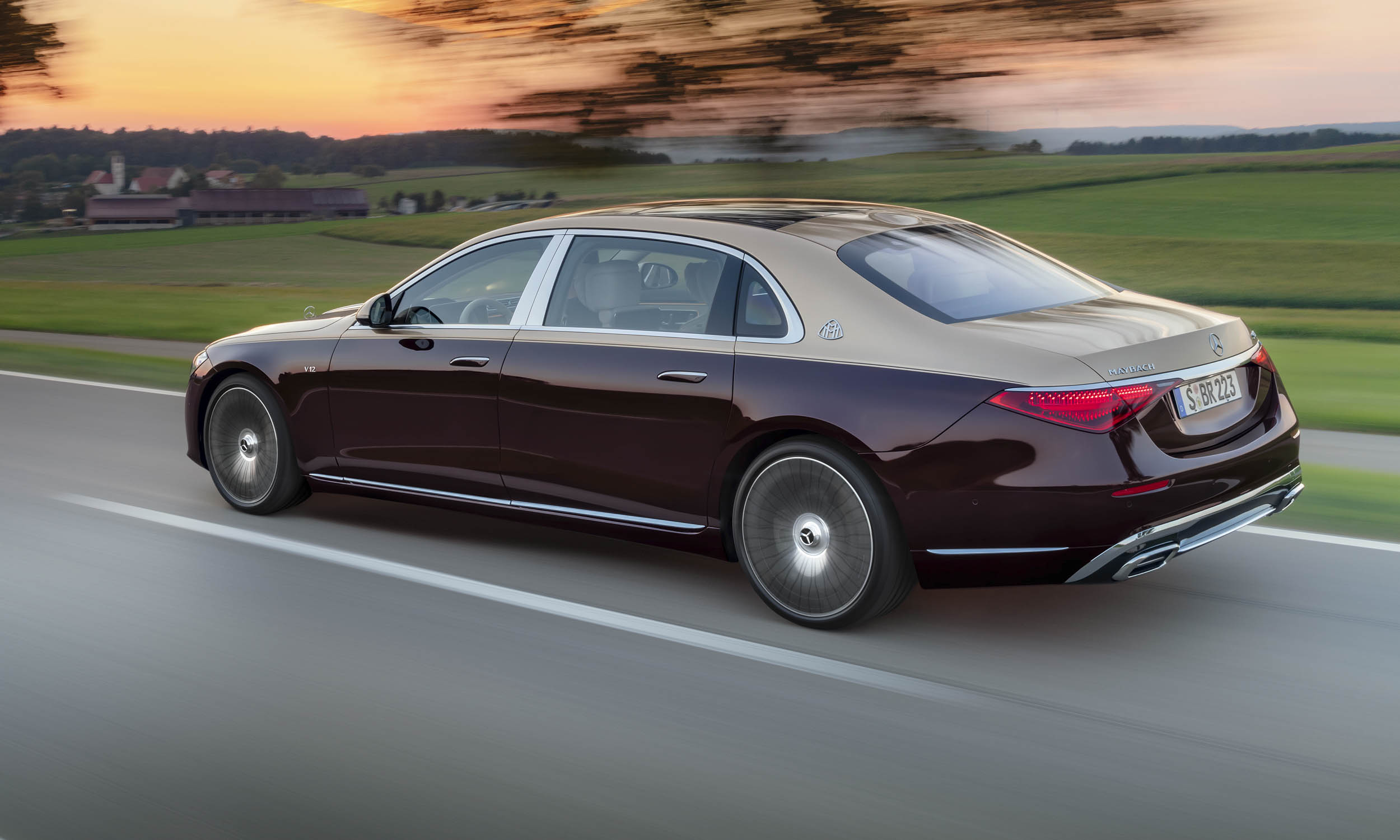 4MATIC
To maintain control of that V12 power, the S 680 has 4MATIC permanent all-wheel drive as standard equipment. Designed to provide the highest levels of both ride comfort and driving dynamics, the 4MATIC system directs 69 percent of the power to the rear axle. The Maybach S-Class also gets rear-axle steering for improved maneuverability at slower speeds as well as better handling at higher speeds. 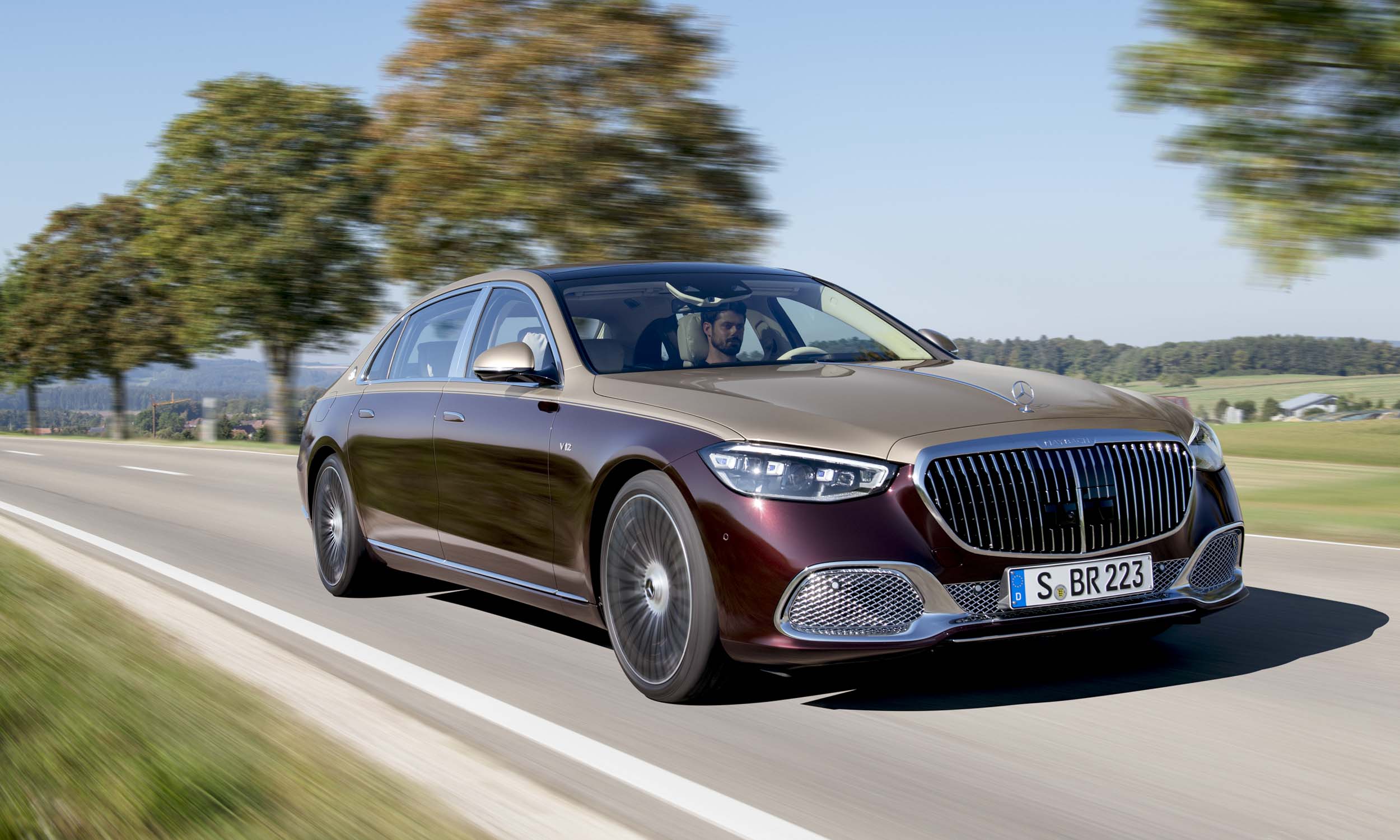 Refined Quietude
Mercedes-Benz claims the S-Class is one of the most refined and quiet luxury sedans on the road, with the Maybach line at an even higher levels of serenity. And now the 2022 Mercedes-Maybach S 680 offers active road noise canceling that uses phased sound waves from the Burmester 4D surround sound system to counter low-frequency noises, making the Maybach even quieter than before. 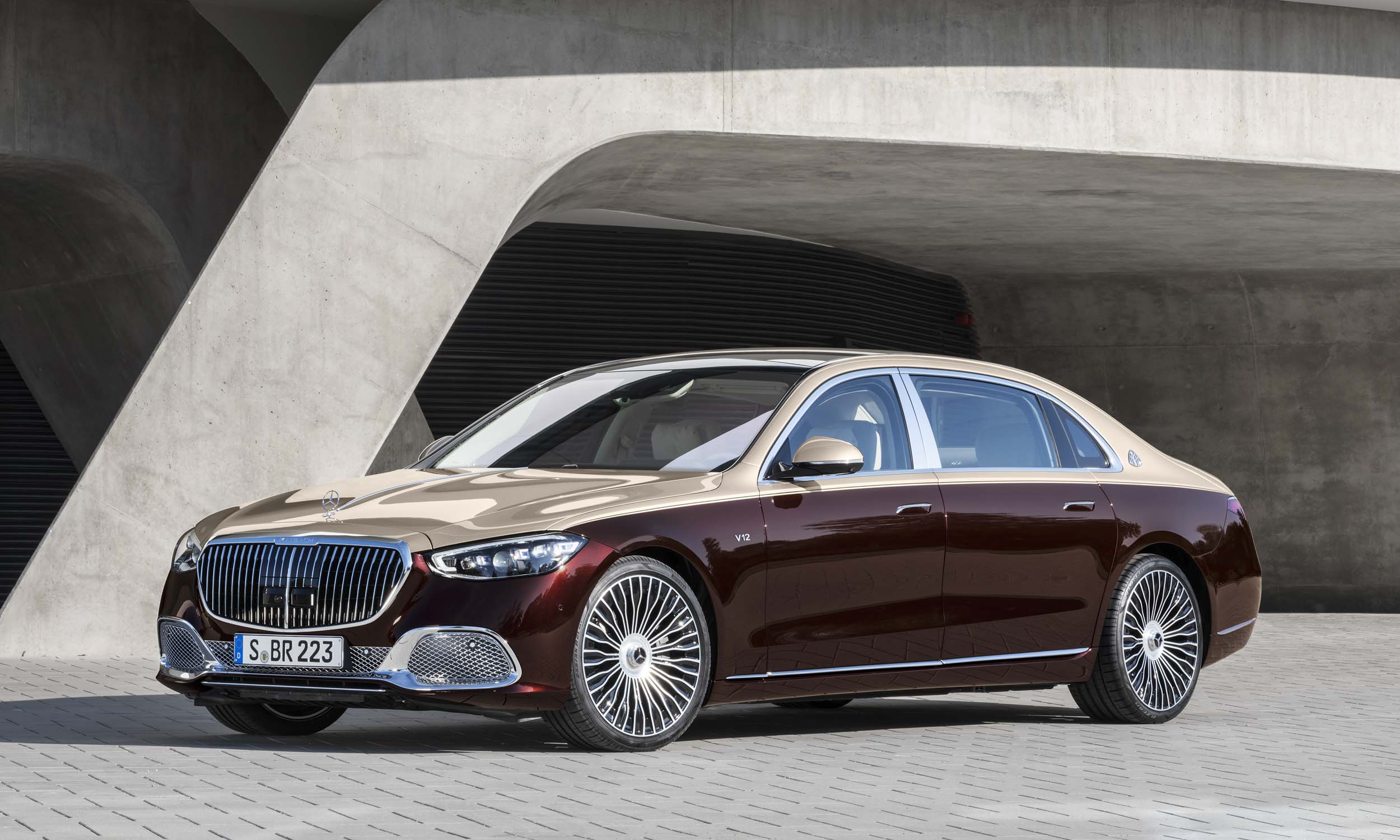 Two-Tone Paint
Purchasers of the 2022 Mercedes-Maybach S 680 will have the choice of ten hand-painted two-tone paint combinations. For the two-tone process, the lower paint color is applied in the paint shop over the entire body; then the body shell gets transferred to a custom paint shop for the taping and hand painting of the upper paint color, including the painted dividing line. The painting process for the optional two-tone paints can take up to a week to complete. 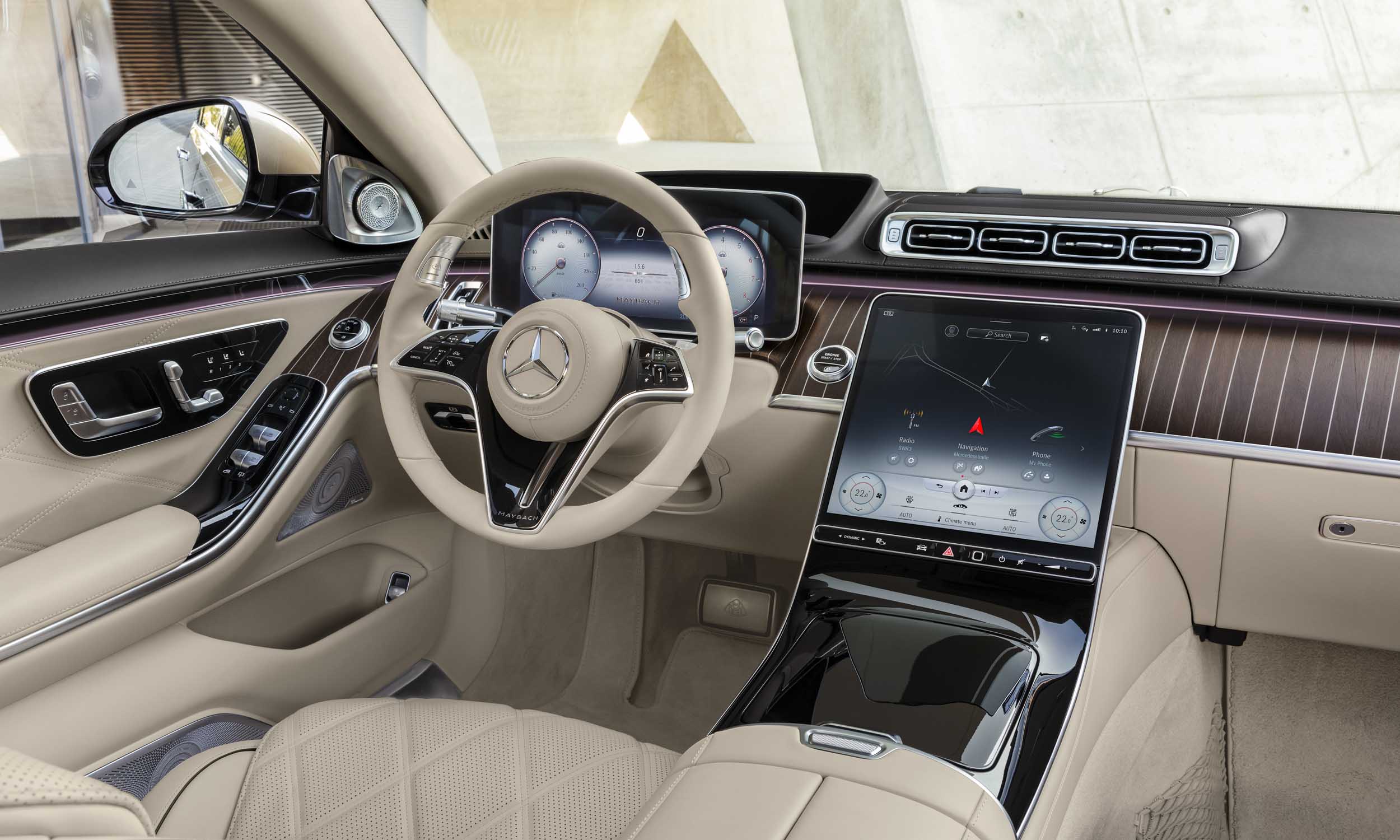 Exclusive Maybach S-Class Interior
Granted, the sublime V12 powerplant of the 2022 Mercedes-Maybach S 680 may be of greatest benefit to the driver, although passengers will discover the rear seat showcases the true elegance of this top-level Mercedes, which greatly benefits from the longer wheelbase of the Mercedes-Maybach S-Class. All occupants benefit from exclusive Maybach Nappa leather upholstery on both front and rear Active Multicontour seats. 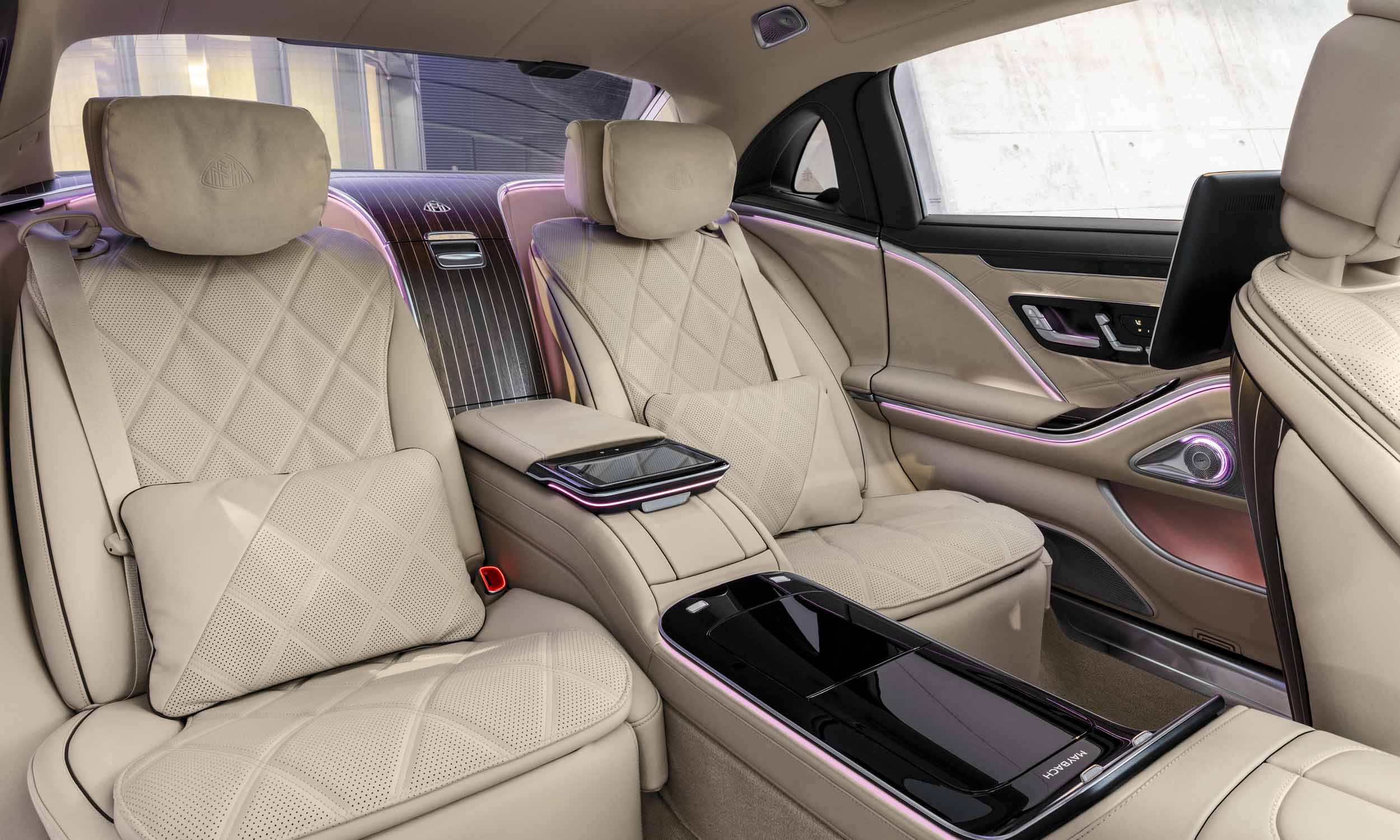 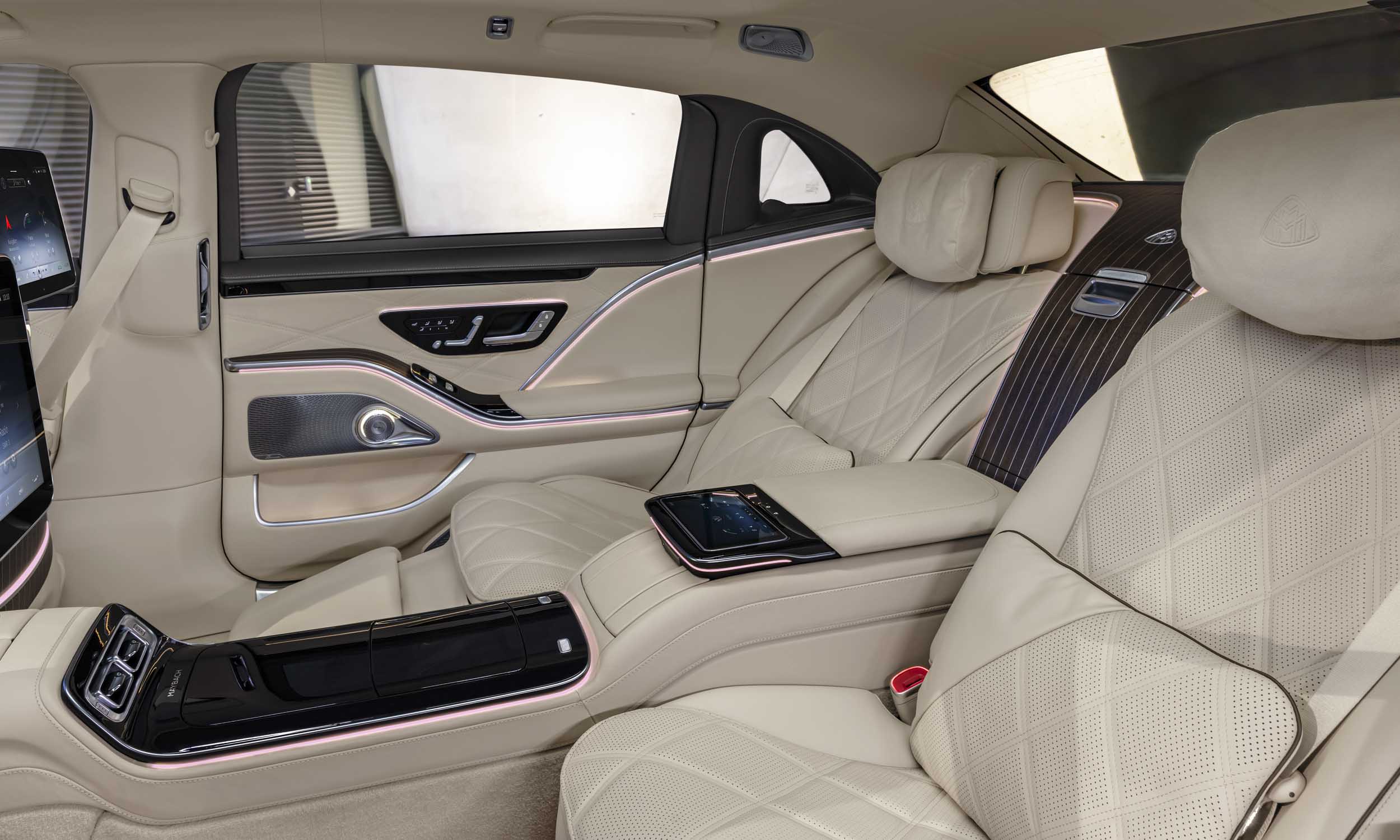 Executive Seating
The level of luxury in the 2022 Mercedes-Maybach S 680 seems limitless, with a leather headliner and a large area of high-quality wood wrapping the front seatbacks as well as the center area between the rear seats when the vehicle is equipped with the 4-seat Executive Rear Seat Plus package. This four-seat configuration features a continuous electric rear center console, two folding tables, temperature-controlled cupholders, an illuminated storage compartment with a 12V socket and wood trim with the Maybach emblem. Available electronically operated rear doors can be controlled by the rear-seat passenger or the driver. 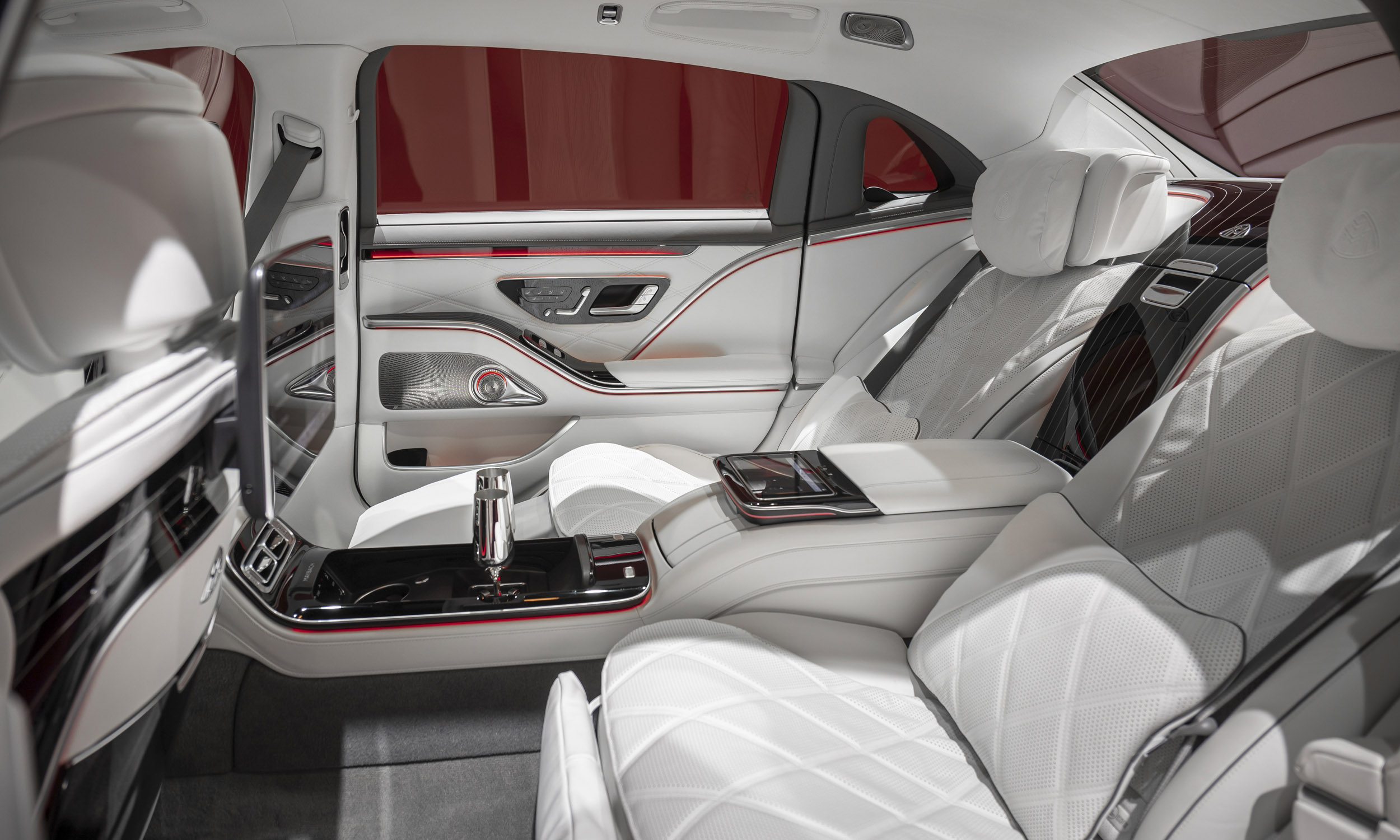 Rear-Seat Passenger Airbags
In yet another first for Mercedes-Benz, the new Maybach S-Class offers frontal airbags for rear-seat passengers with an innovative tubular system that rapidly inflates and positions the airbags, yet deploys them gently. During severe frontal collisions, the rear airbags can considerably reduce the impact on heads and necks of occupants in the outer rear seats. 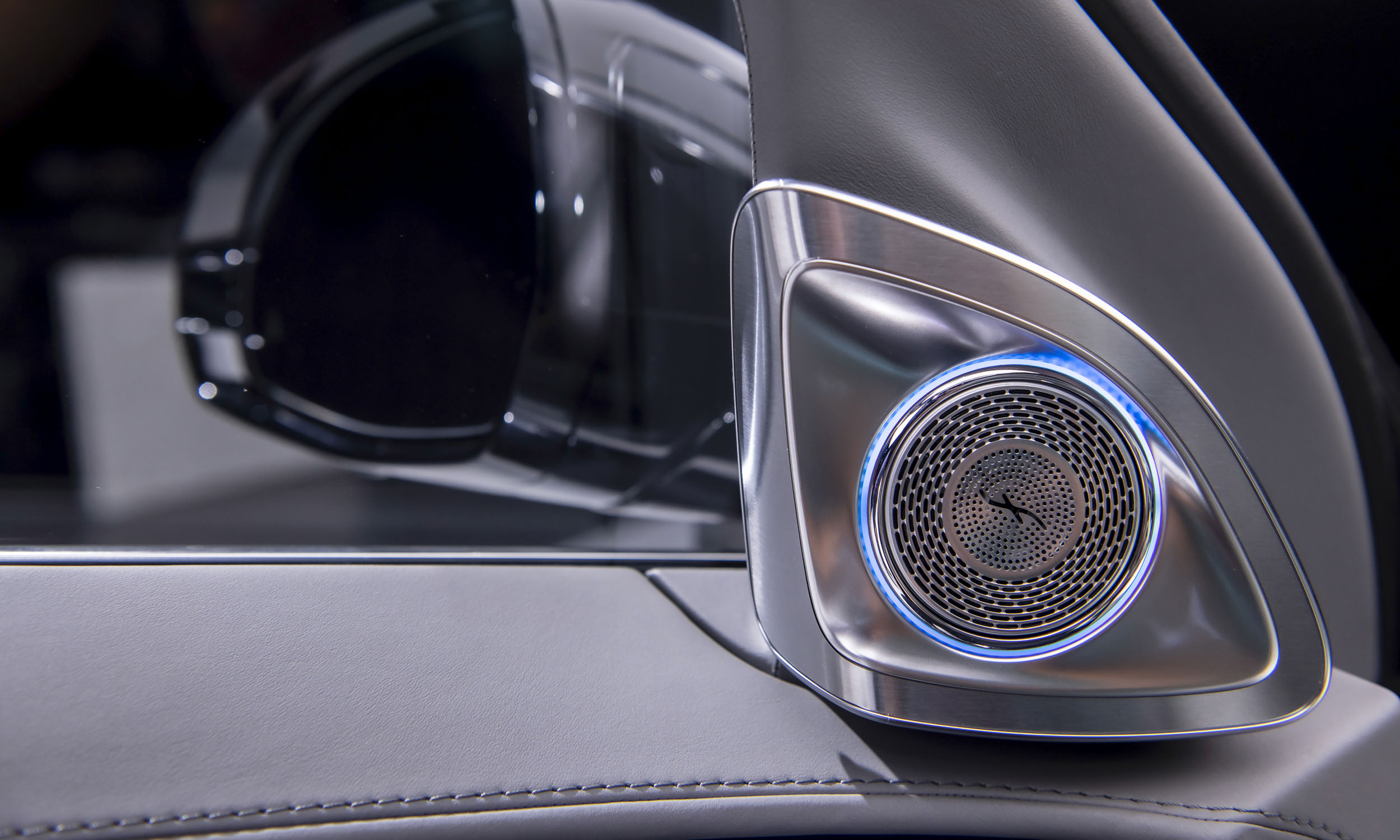 Burmester High-End 4D Surround Sound
The 2022 Mercedes-Maybach S 680 has a Burmester High-End 4D Surround Sound system that features 30 speakers with dedicated amplifier channels, as well as digital and analogue filters for a total output of up to 1,750 watts — including 400 watts of subwoofer bass in the trunk. The system uses speaker-like resonators that have sound massage, with surround speakers integrated into the seats. 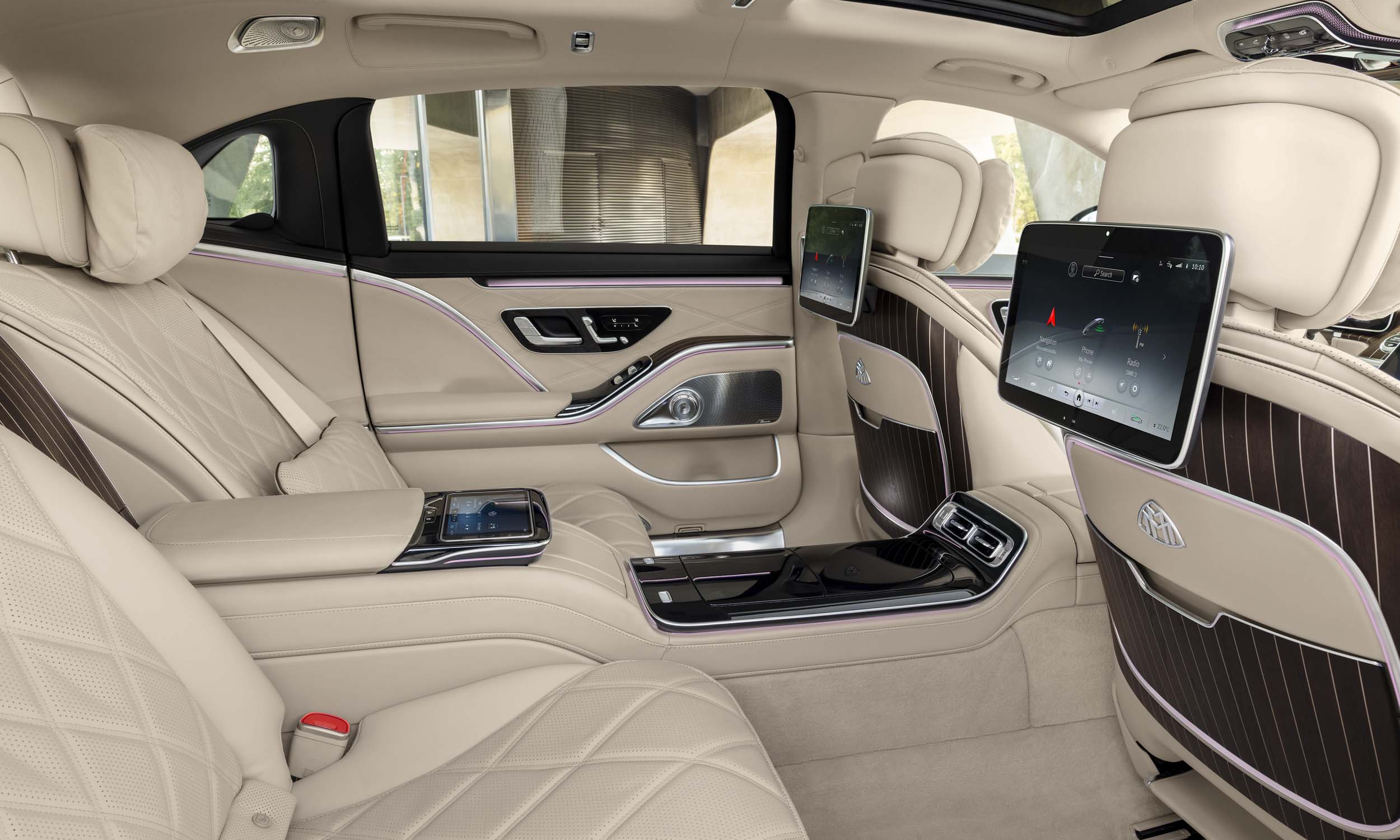 Rear-Seat Entertainment
For those lucky enough to be ensconced in the rear seats of the 2022 Mercedes-Maybach S 680, a high-end rear-seat entertainment system awaits. With two fully integrated 11.6-inch display screens, passengers can access vehicle functions, surf the internet or enjoy a movie. 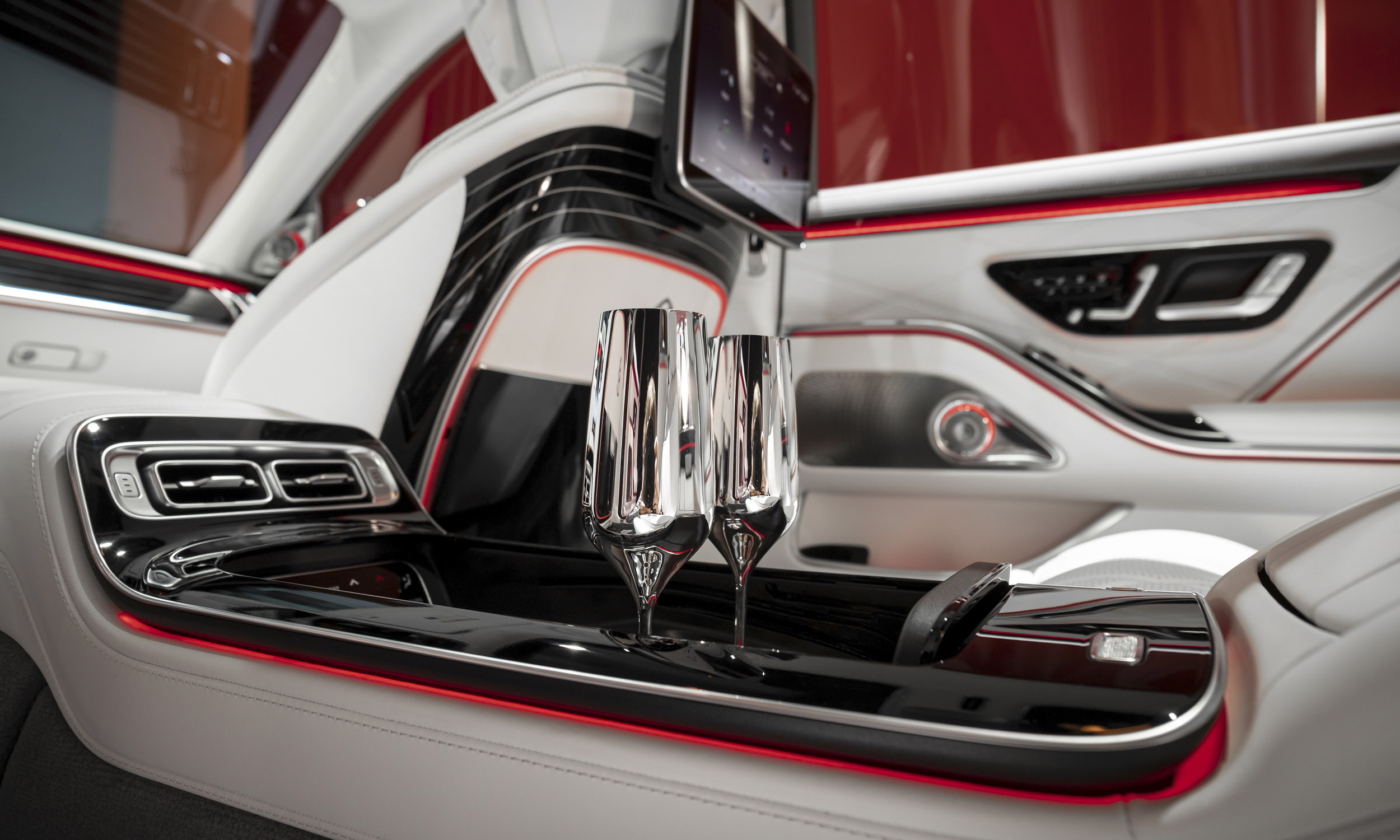 Champagne Dreams
How does Mercedes-Maybach enhance the ultra-luxurious ride for rear-seat passengers? The S 680 can be equipped with a rear refrigerated compartment designed for a bottle of bubbly, as well as custom silver-plated champagne flutes. The center console has matching holders so no liquids get spilled while this luxurious land yacht is on the move. 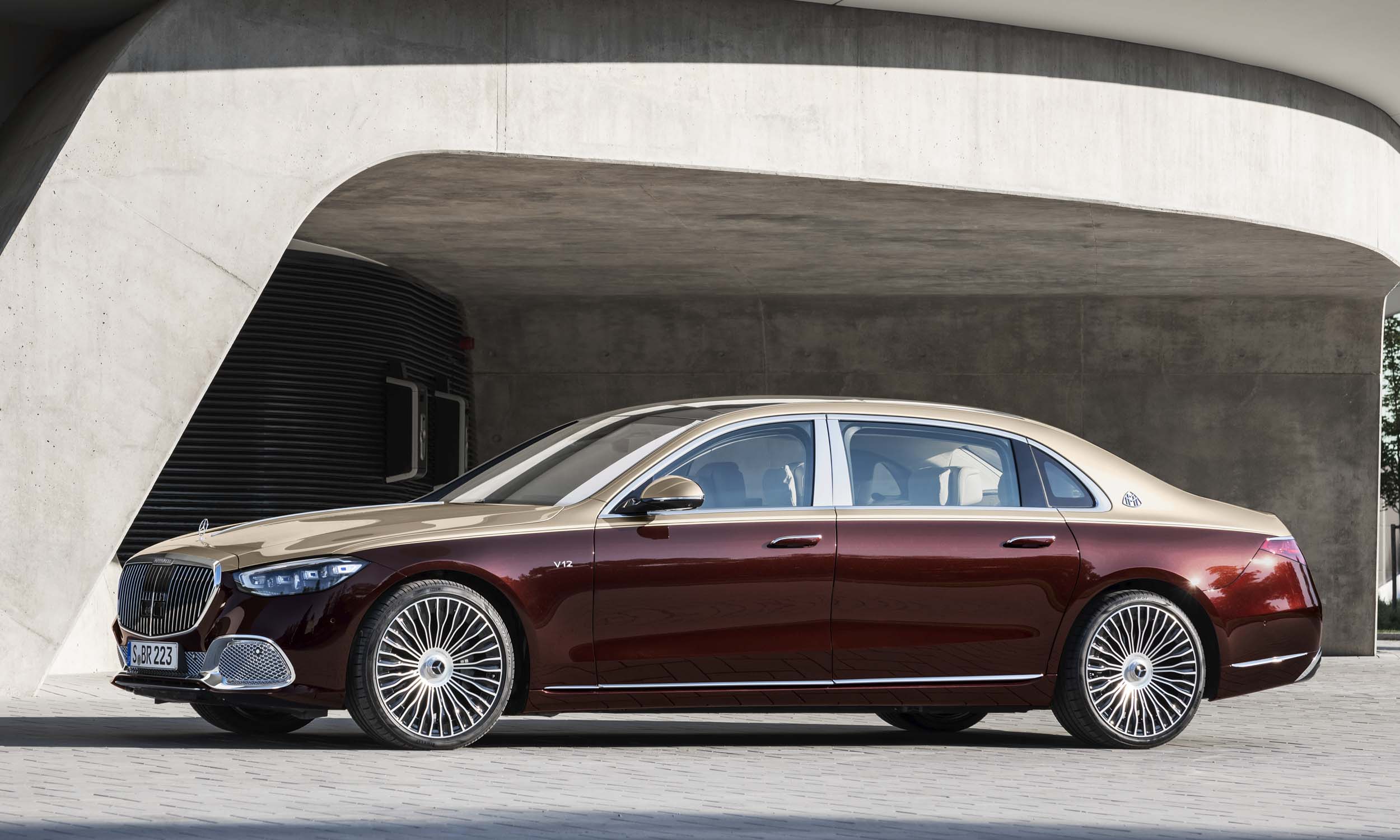 Coming Next Year
The new Mercedes-Maybach S 680 is slated to arrive during the first half of 2022, following the Maybach S580 which arrives later this year. Pricing will be announced closer to the on-sale date. 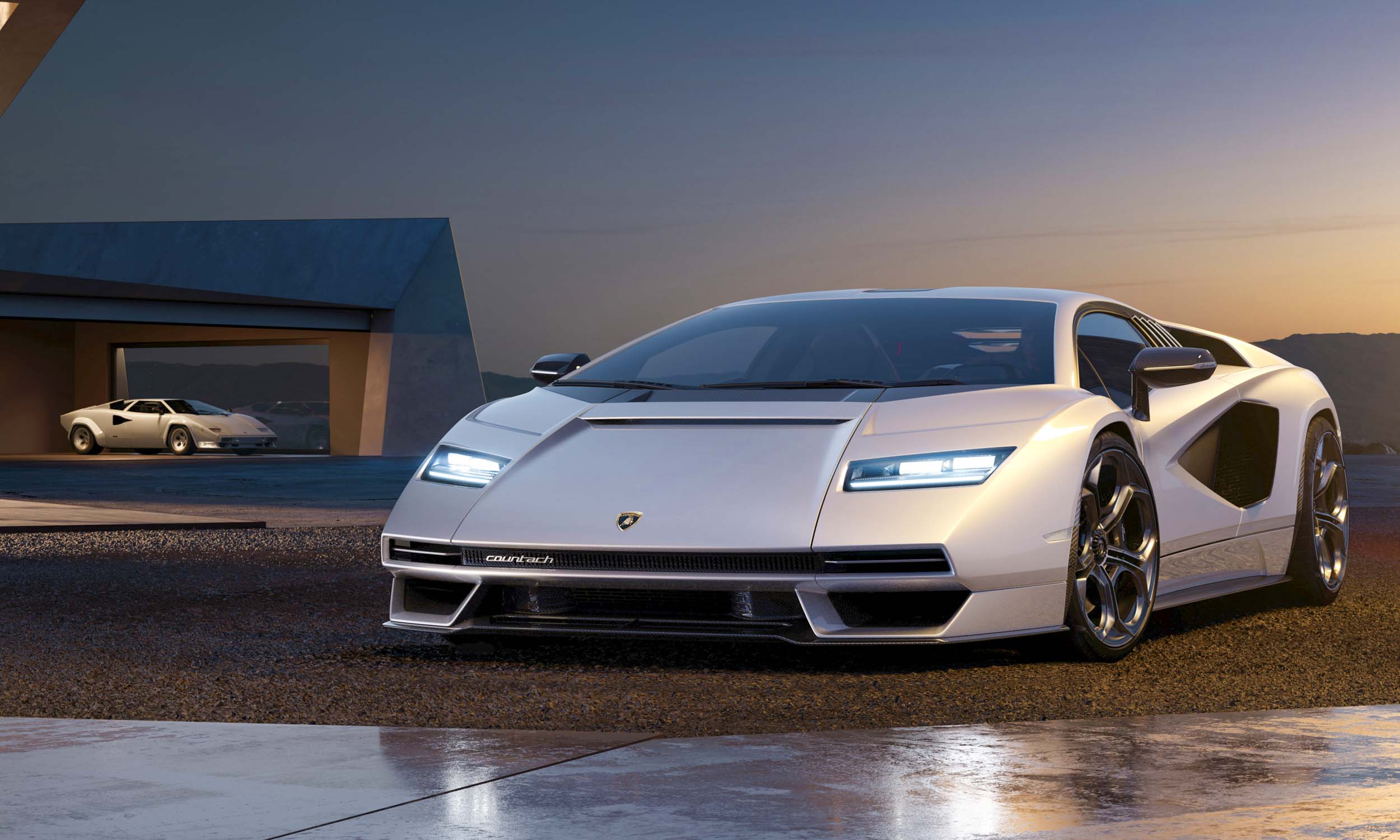 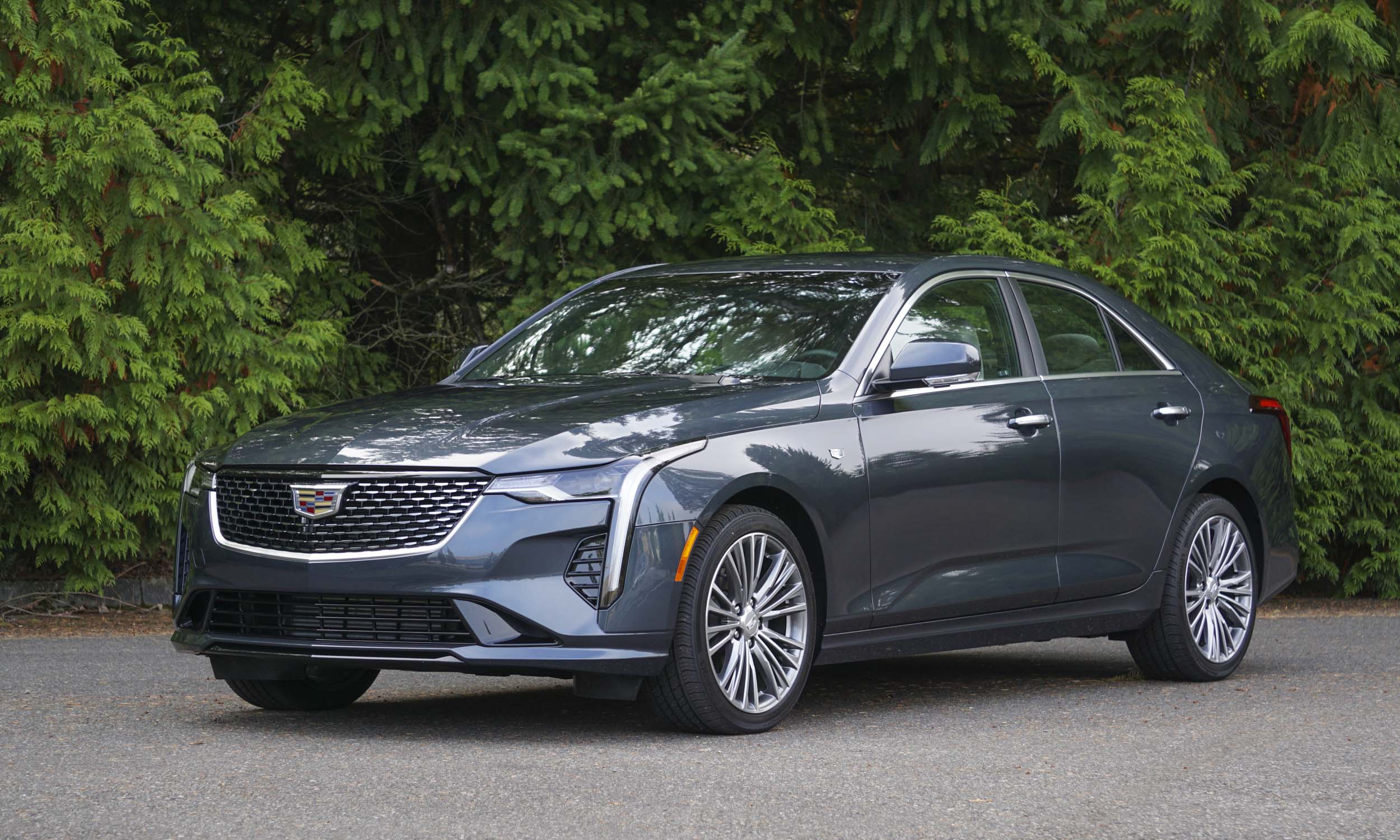