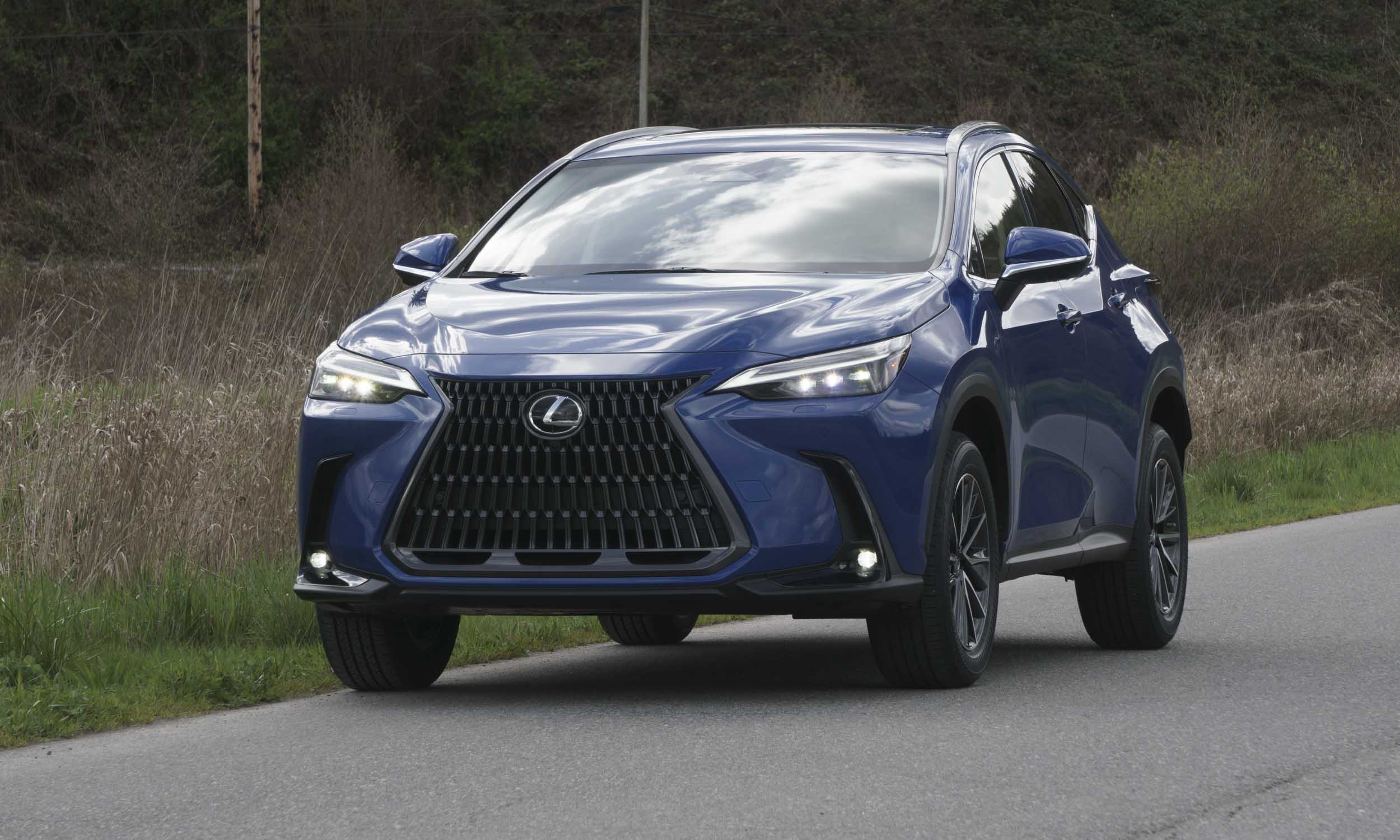 What Is It?
One of the most popular models in the Lexus lineup, the NX is the brand’s luxury compact crossover. Initially launched in 2014, the NX receives some major updates for the 2022 model year including a fresh design, new powertrains and a much-improved multimedia system. We spent a few days with the non-hybrid version of the 2022 Lexus NX and discovered it is quite competitive in the crowded premium compact crossover market. 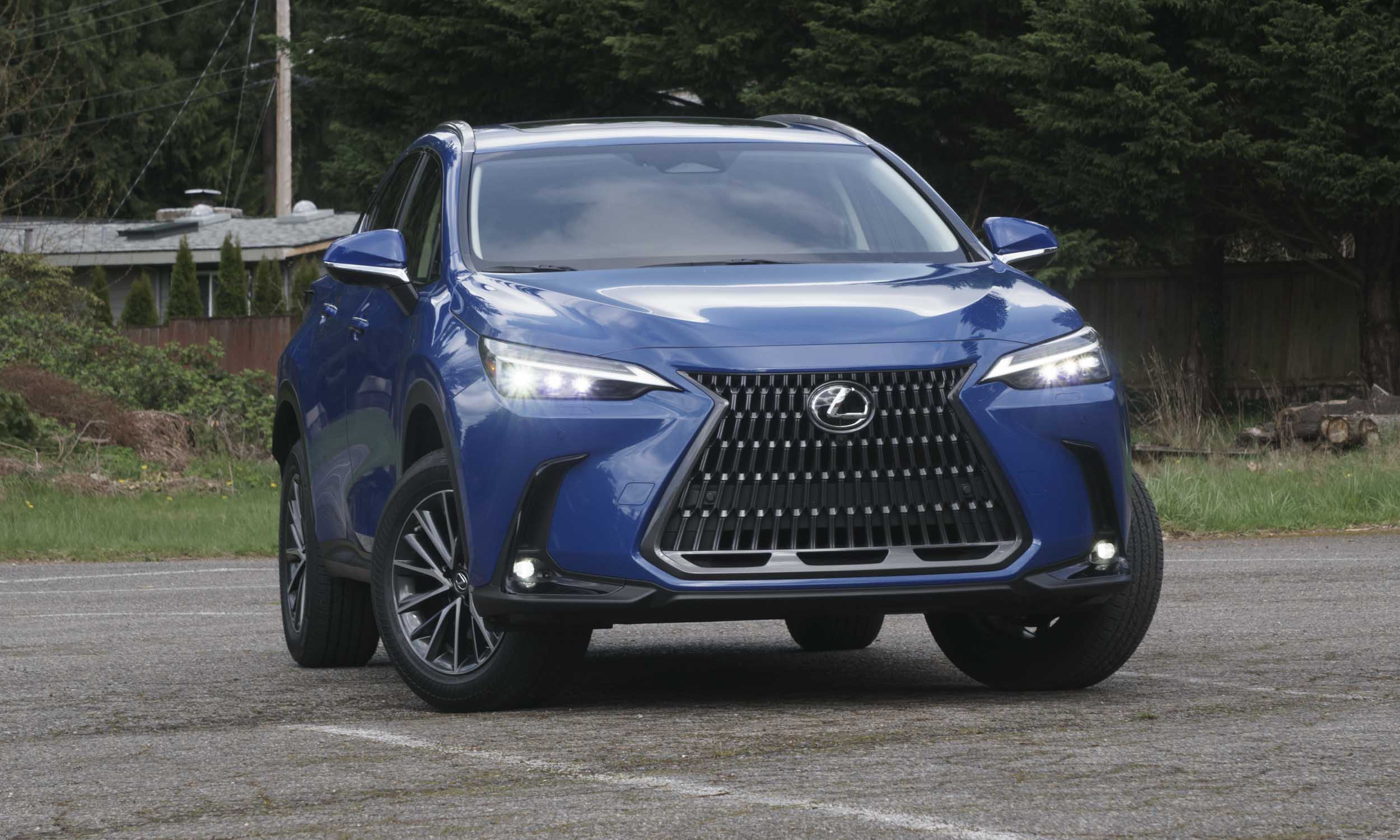 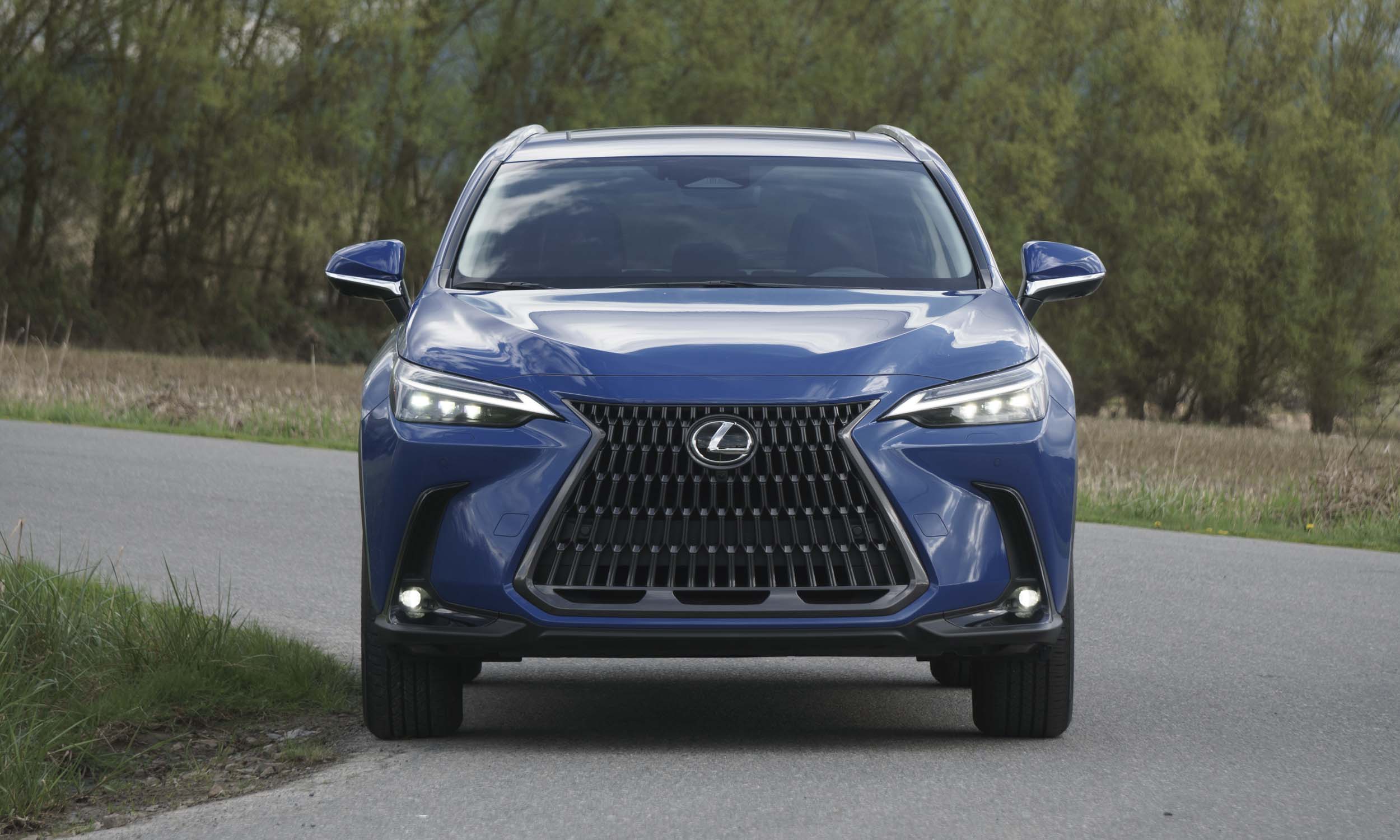 Styling Updates
Lexus continues to iterate on its hallmark large spindle grille with every new model, and the latest version looks good on the new NX, fitting nicely within the small crossover’s proportions. That said, the grille dominates the front end with a three-dimensional pattern providing depth and character, framing slim LED headlights that wrap around the corners and integrate with signature L-shaped running lights. 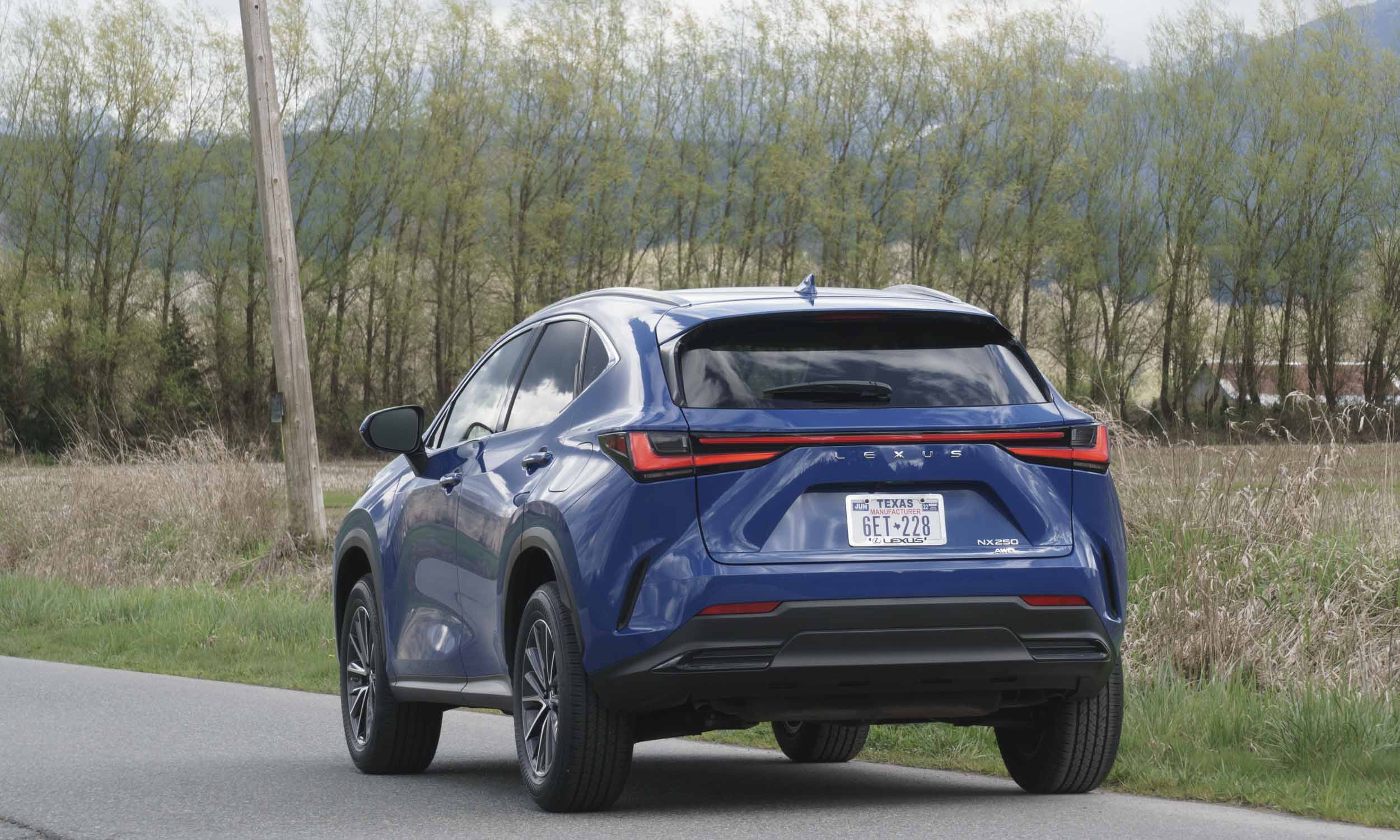 Rear View
The tailgate of the 2022 NX no longer features the Lexus logo — instead LEXUS gets spelled out in large letters between the taillights so there’s no mistaking the NX for anything but a member of Toyota’s premium brand. Speaking of the taillights, the rear of the NX also sports LEDs that wrap slightly around the corners of the vehicle and get connected by a light bar that stretches across the tailgate to give the NX a wide stance. 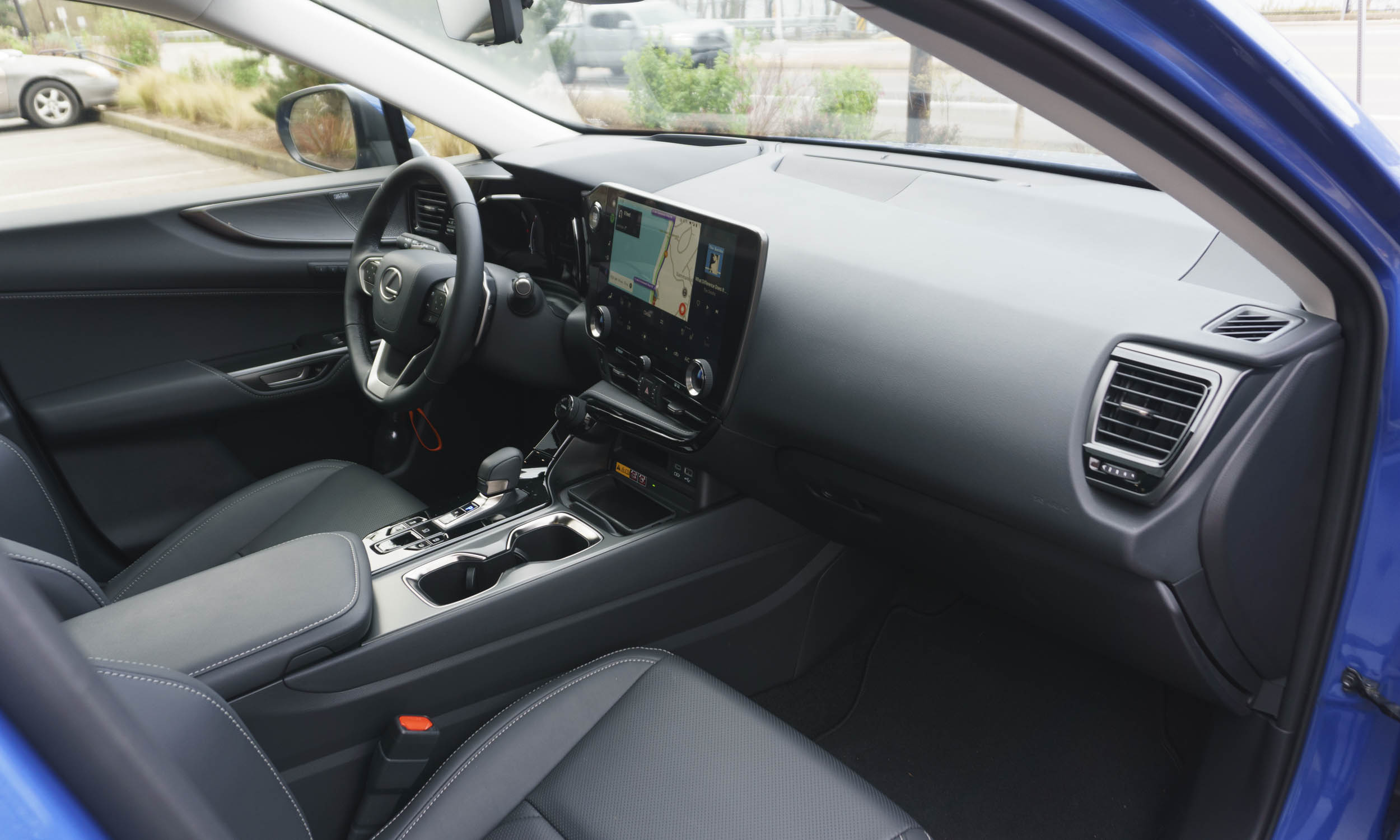 Inner Space
The interior of the updated 2022 Lexus NX is clearly designed around the driver with a large display screen and all associated controls angled to the left so they smoothly flow into the driver display. While this setup is stylish, it makes more sense on a vehicle designed for driver performance. The NX is a family crossover, so we would expect the display to be more accessible to the front passenger as well. 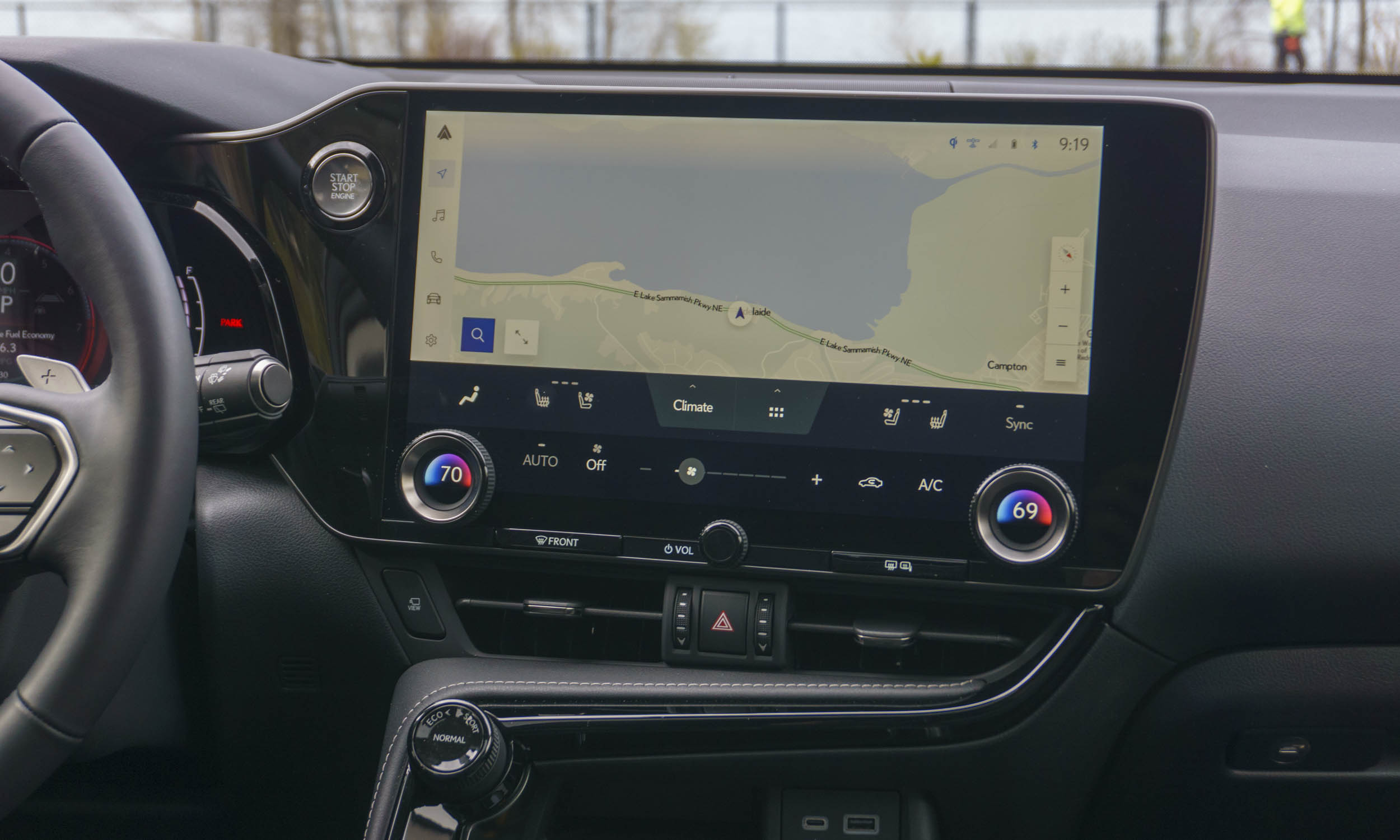 Improved Interface
Even though we may not be fans of the overall layout, the system itself is vastly improved. Previous versions of the Lexus infotainment system are among the most difficult to use in the industry, so we are pleased to see the 2022 NX get an all-new Lexus Interface System. This new version eliminates the previous trackpad, instead letting the driver interface with it via the large touchscreen display and new voice control. 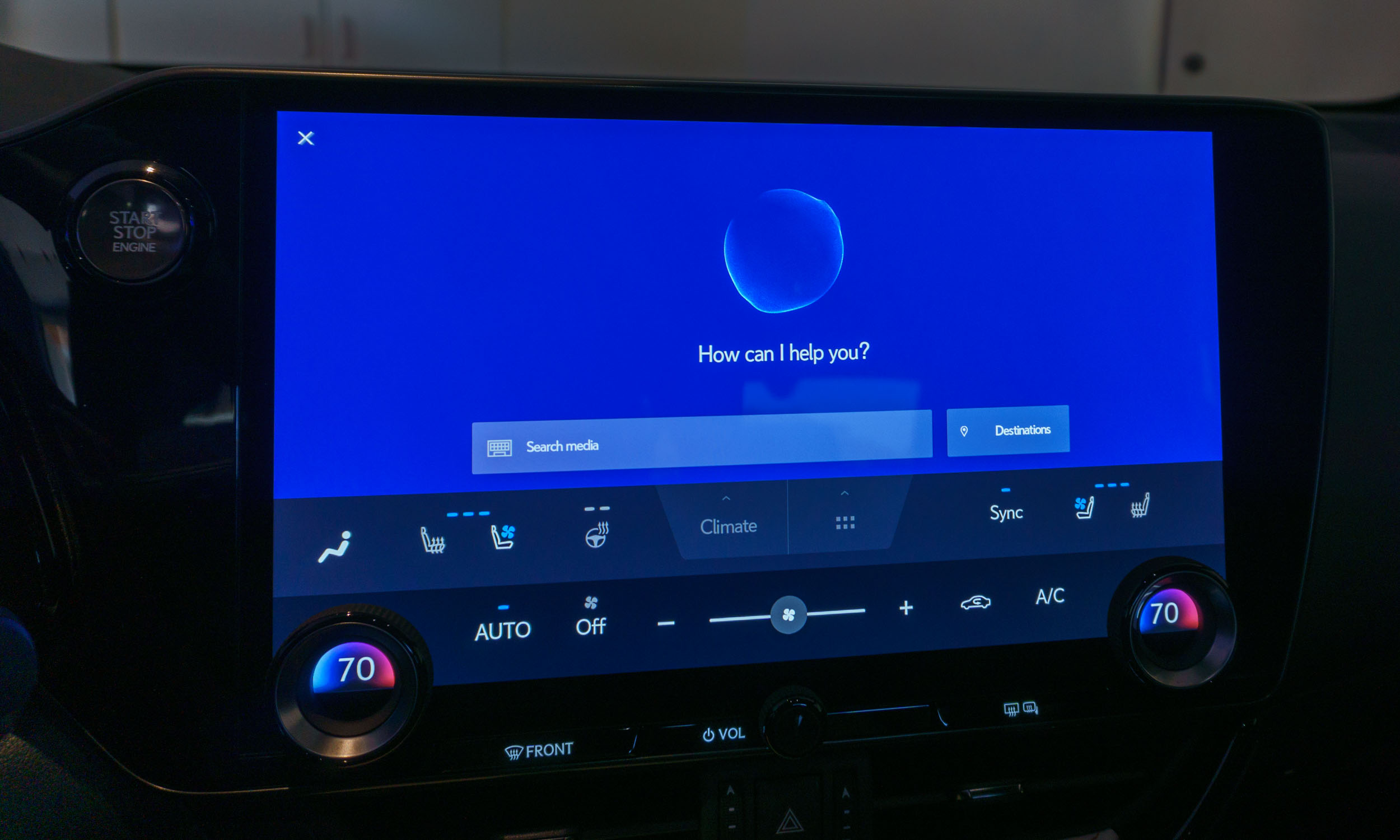 Hey Lexus
One of the outstanding features of the new Lexus Interface System is voice interface. Responding to a user saying “Hey Lexus,” the system will inquire what it can do for the speaker. The NX has microphones above both driver and passenger, so the system will respond from the right or left speaker depending on who made the inquiry. Designed to converse in natural language, the system works relatively well — for example, we told the vehicle we wanted a pastrami sandwich and it instantly brought up a list of delicatessens in the area with the option to navigate or call. Like many of the voice-operated systems on the market, they’re great when they work. On a few occasions the system did not recognize or hear the “Hey Lexus” prompt, or it misinterpreted the request. For simple items such as adjusting climate controls or tuning the radio, we prefer simpler buttons and knobs. 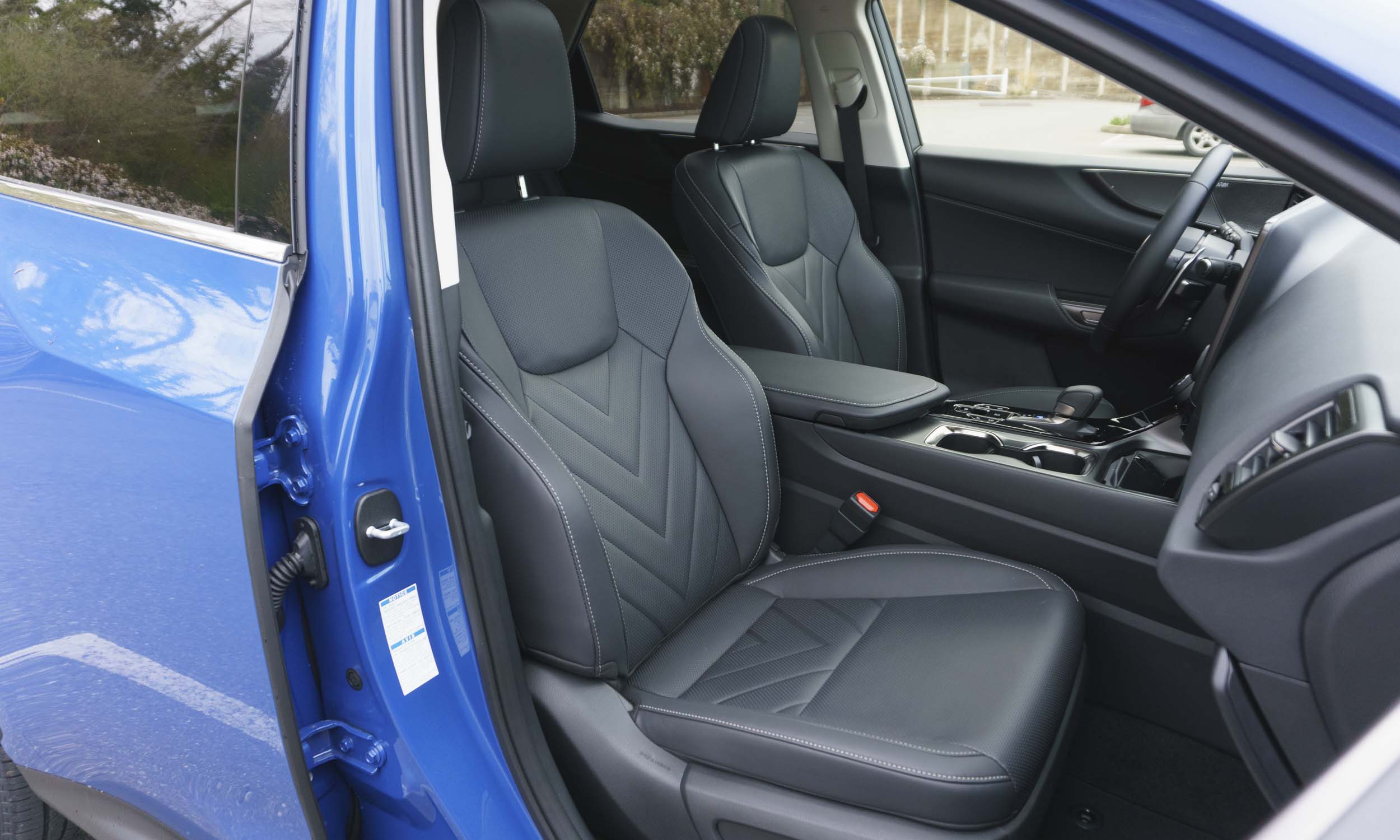 Front Seats
This 2022 Lexus NX tester arrived with upgraded heated and cooled leather seats that feature premium stitching, decent side bolsters and an attractive pattern. With multiple adjustments the seats are comfortable and offer good support, even after long stints behind the wheel. The NX has a decent amount of space for storage between the seats, and the center console opens to the right or left, making access easy for both driver and front passenger. Wireless phone charging as well as multiple USB ports are easily accessible. 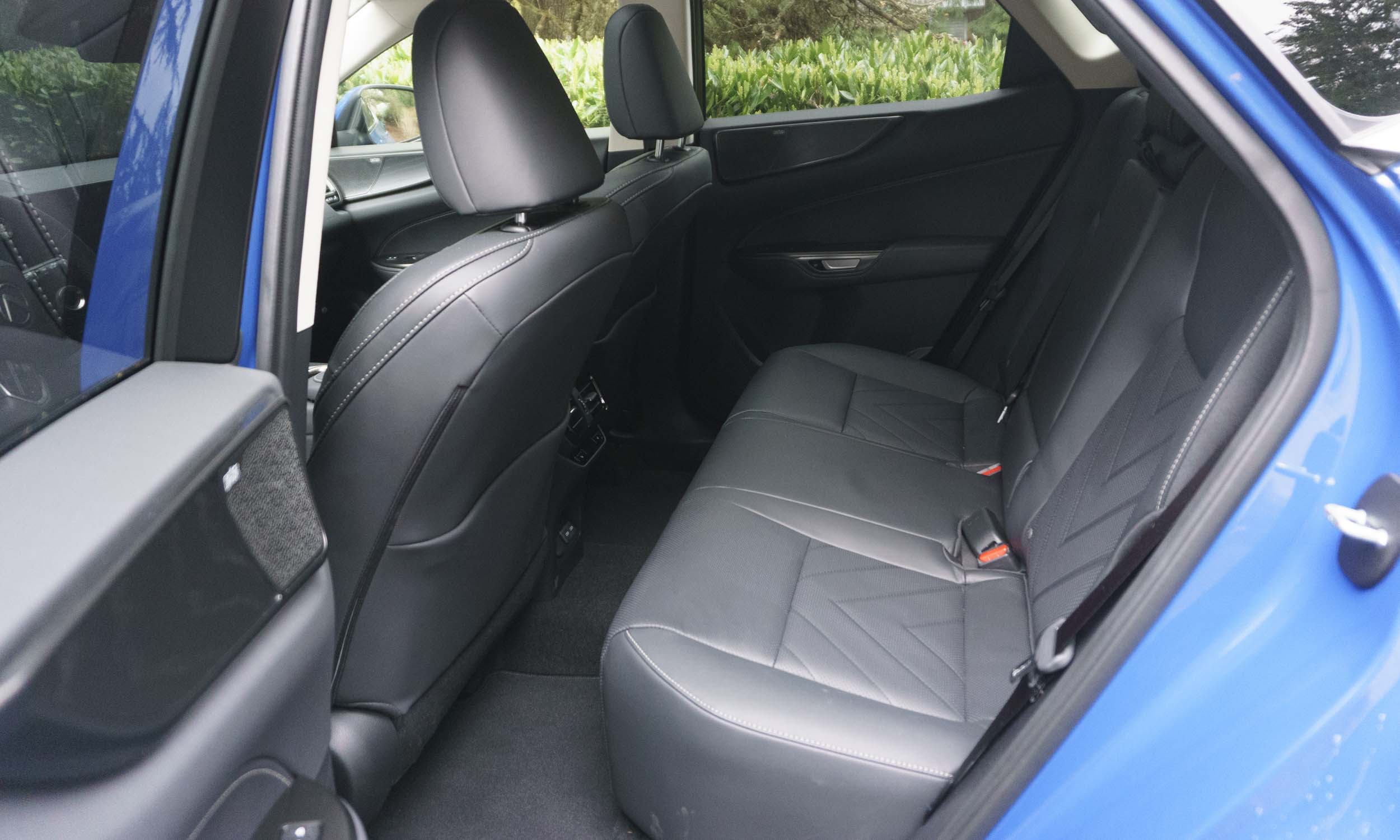 Rear Seats
Although the 2022 Lexus NX is a compact crossover, the interior feels surprisingly spacious. Rear-seat passengers have decent legroom and headroom, and even the middle seat offers reasonable comfort. Two USB ports at the back of the center console keep devices charged for folks sitting in the aft locations. 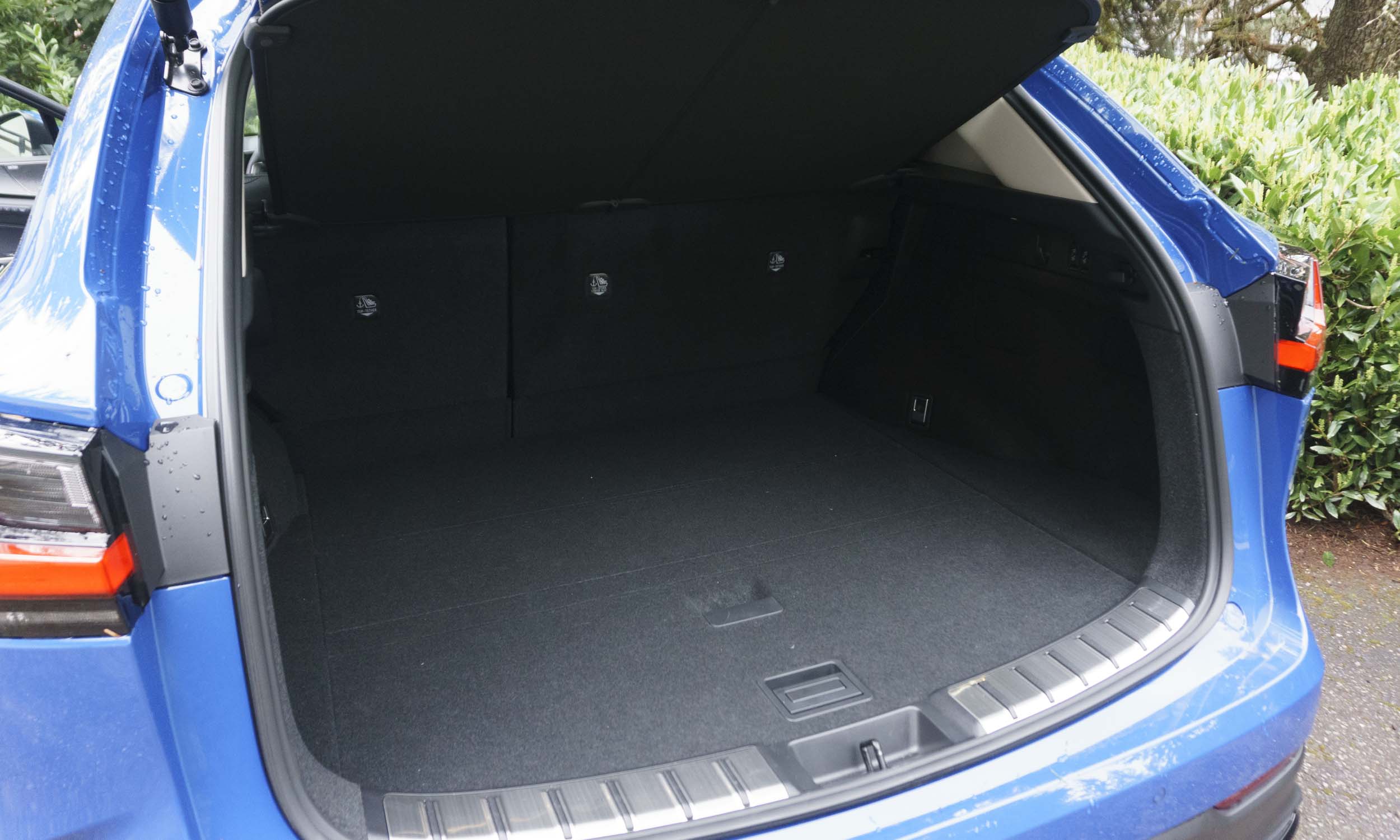 Cargo Space
With this redesign for the 2022 model year, the NX gets 14 percent more cargo space than the previous version. The rear area has plenty of room for larger items or multiple pieces of luggage, and the rear seats can be folded flat via buttons in the cargo area to create an expansive space. 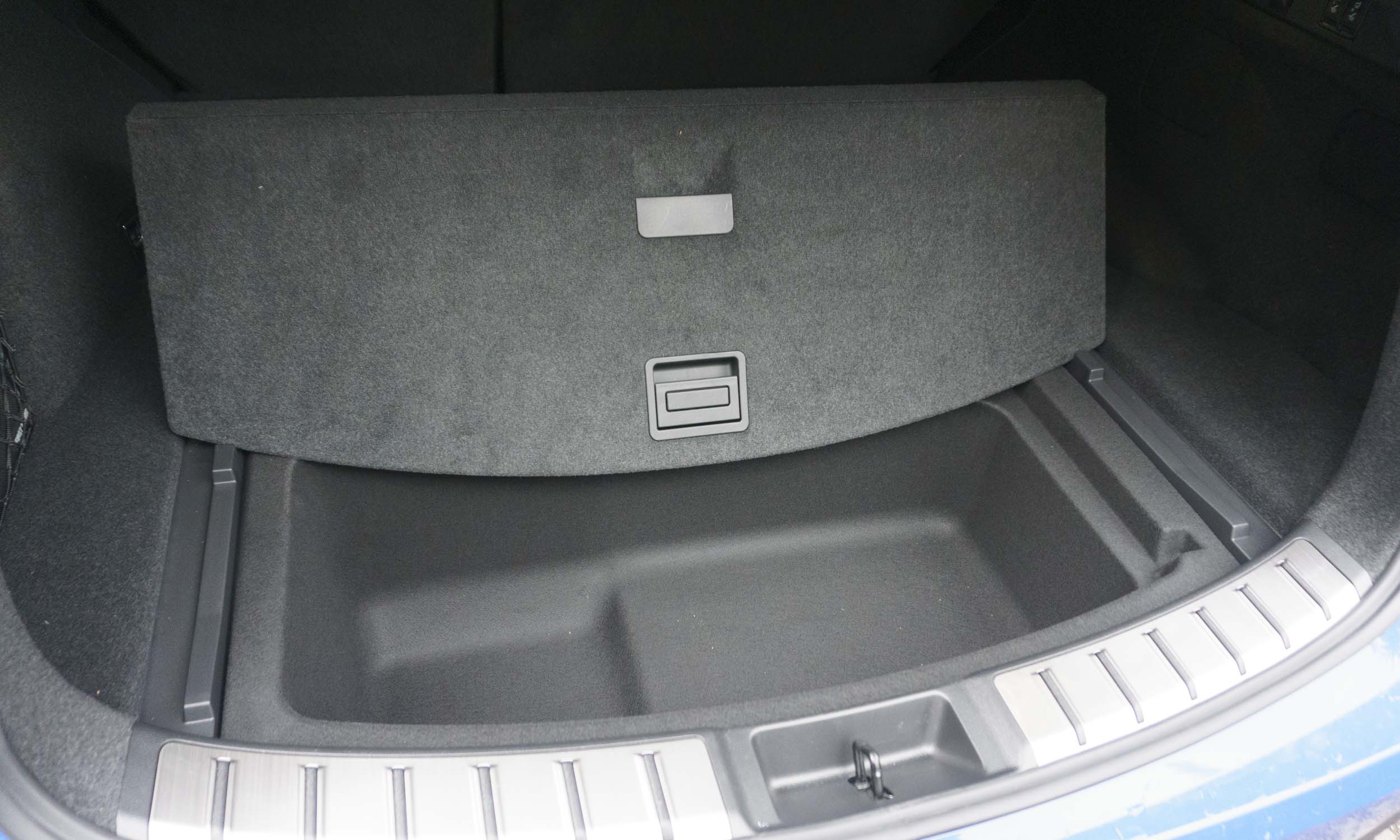 Added Storage
The NX has additional storage space under the floor — a great option for keeping valuable cargo out of sight. 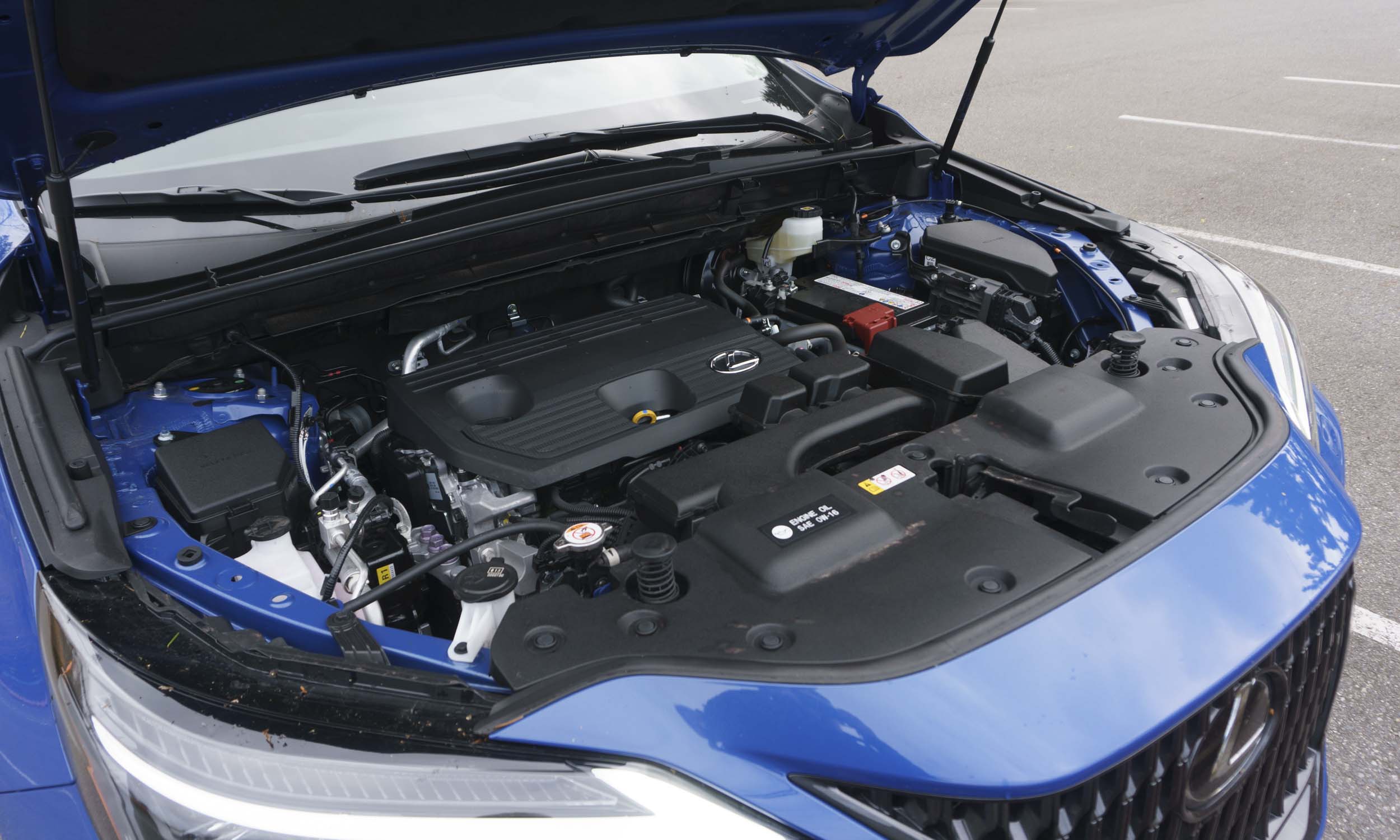 Under the Hood
Powering the 2022 Lexus NX 250 is a 2.5-liter 4-cylinder engine producing 203 horsepower and 184 lb-ft of torque, teamed with an 8-speed automatic transmission. According to the U.S. EPA, the NX 250 AWD is rated at 25 mpg city / 32 mpg hwy / 28 mpg combined — about 1 mpg less than the FWD variant. During our drive the display indicated 26 mpg, so the figures seem to be realistic. 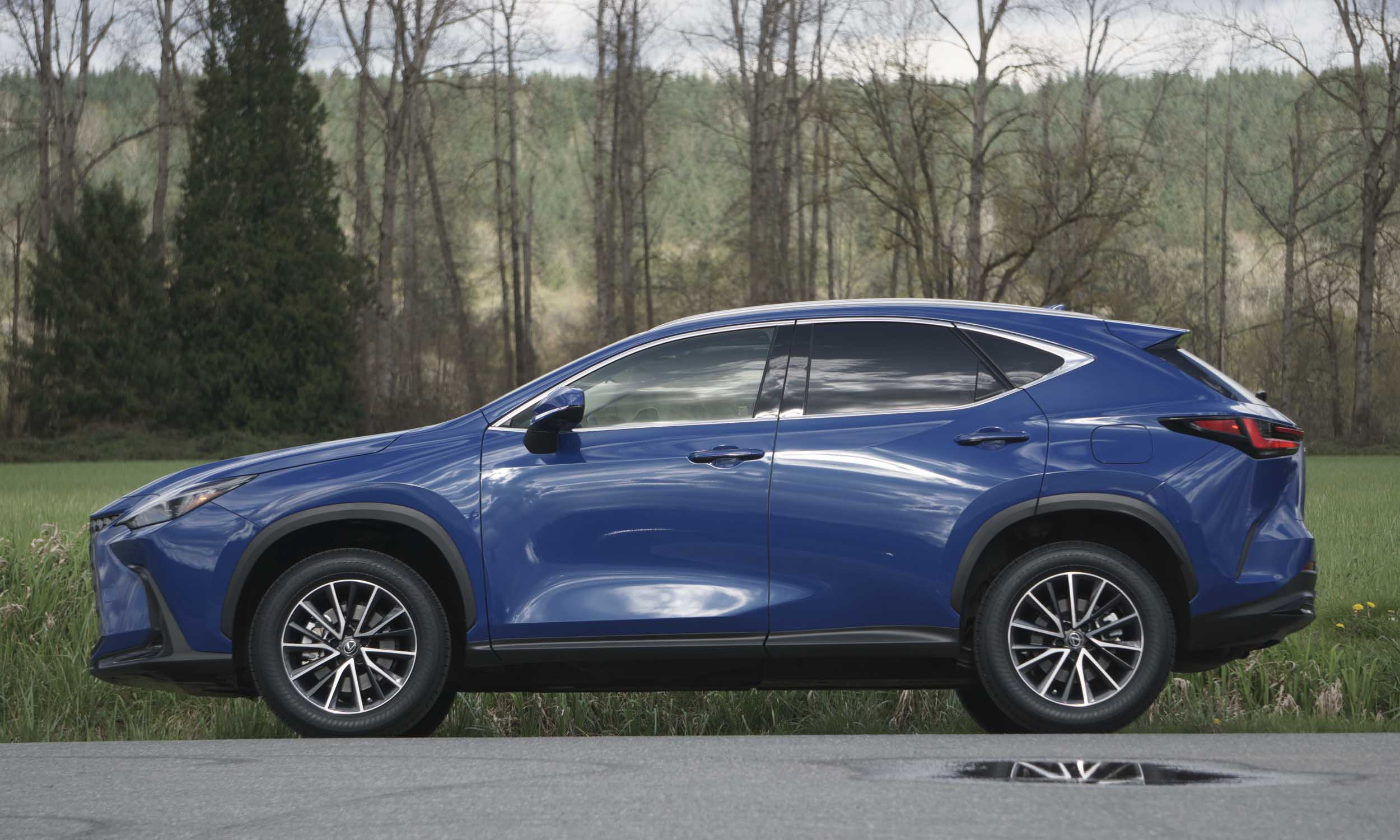 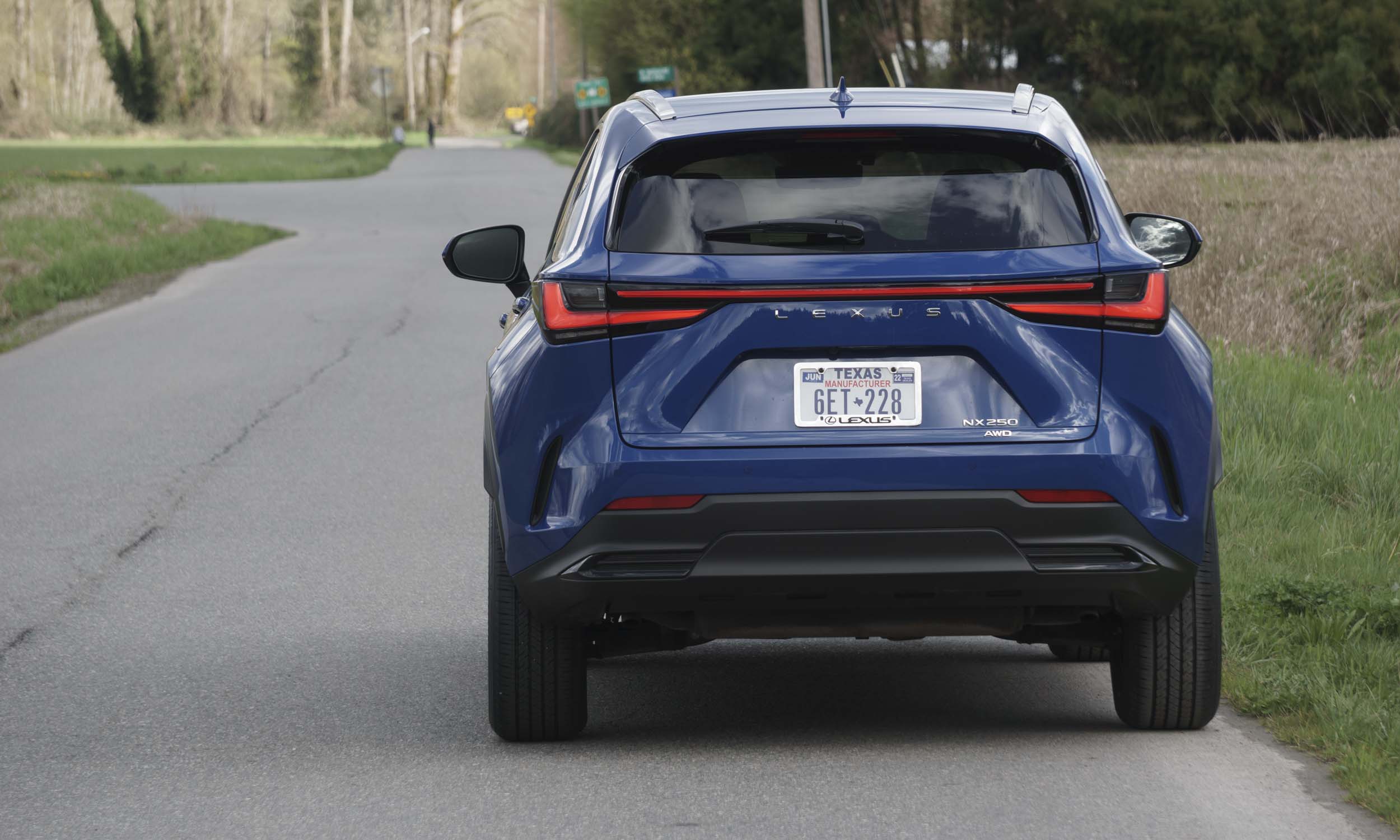 On the Road
Even though the NX is an entry-level Lexus it still delivers a premium experience. Whether cruising at speed on the freeway or wending along backroads of the Pacific Northwest, the NX feels confident with commendable handling and a solid, quiet ride permitting very little road or wind noise intrusion. 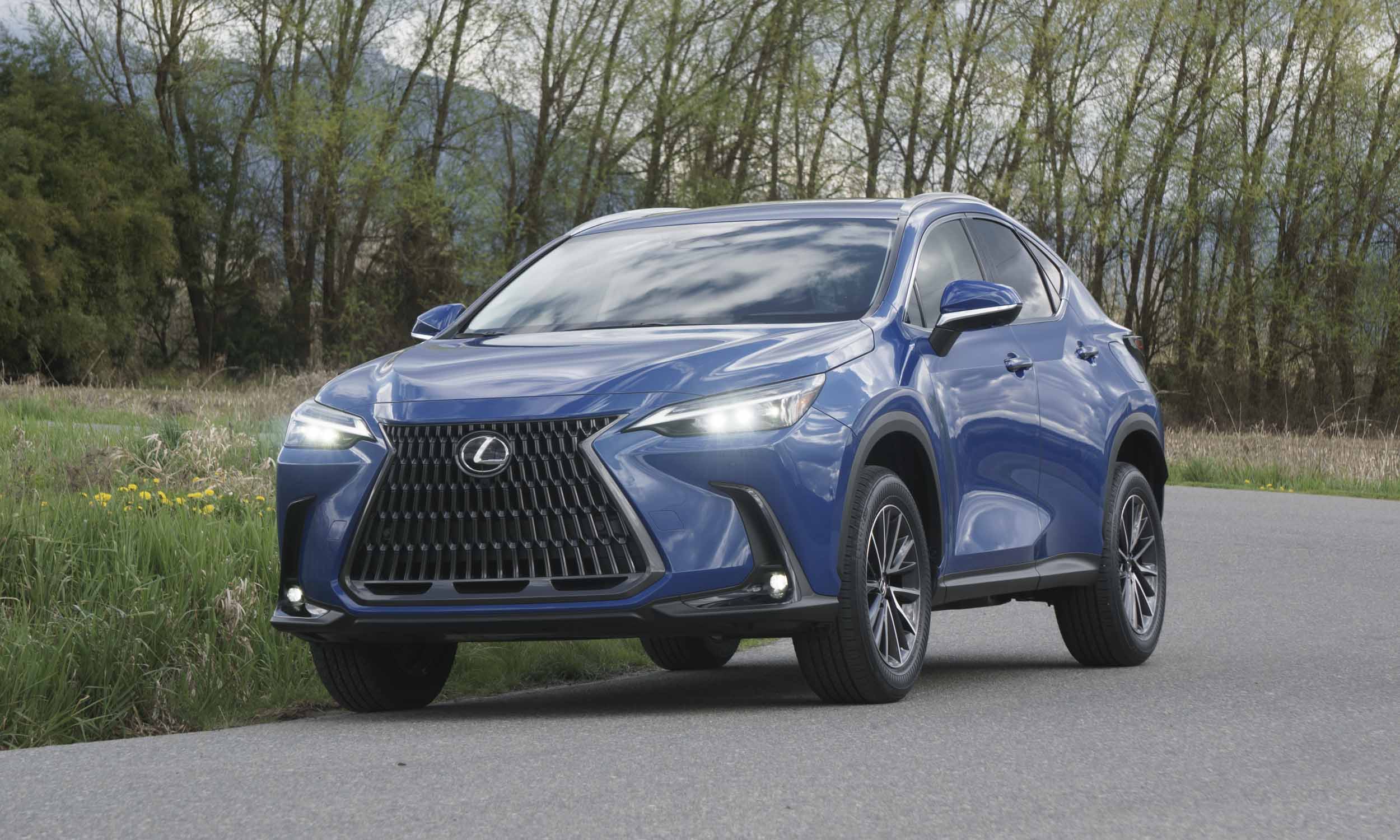 More Power?
For most situations, the 203-horsepower engine of the 2022 Lexus NX has adequate power, although we did want a bit more oomph when attempting to pull out onto busy roads from a standstill. Lexus claims the NX 250 AWD can accelerate to 60 mph in about 8.2 seconds; admittedly not very quick, and the vehicle has to work hard to attain that stat. Putting the NX into Sport mode does help with the responsiveness, providing quicker downshifts and better acceleration from speed. Luckily Lexus does offer more powerful versions of the NX for those who need it. 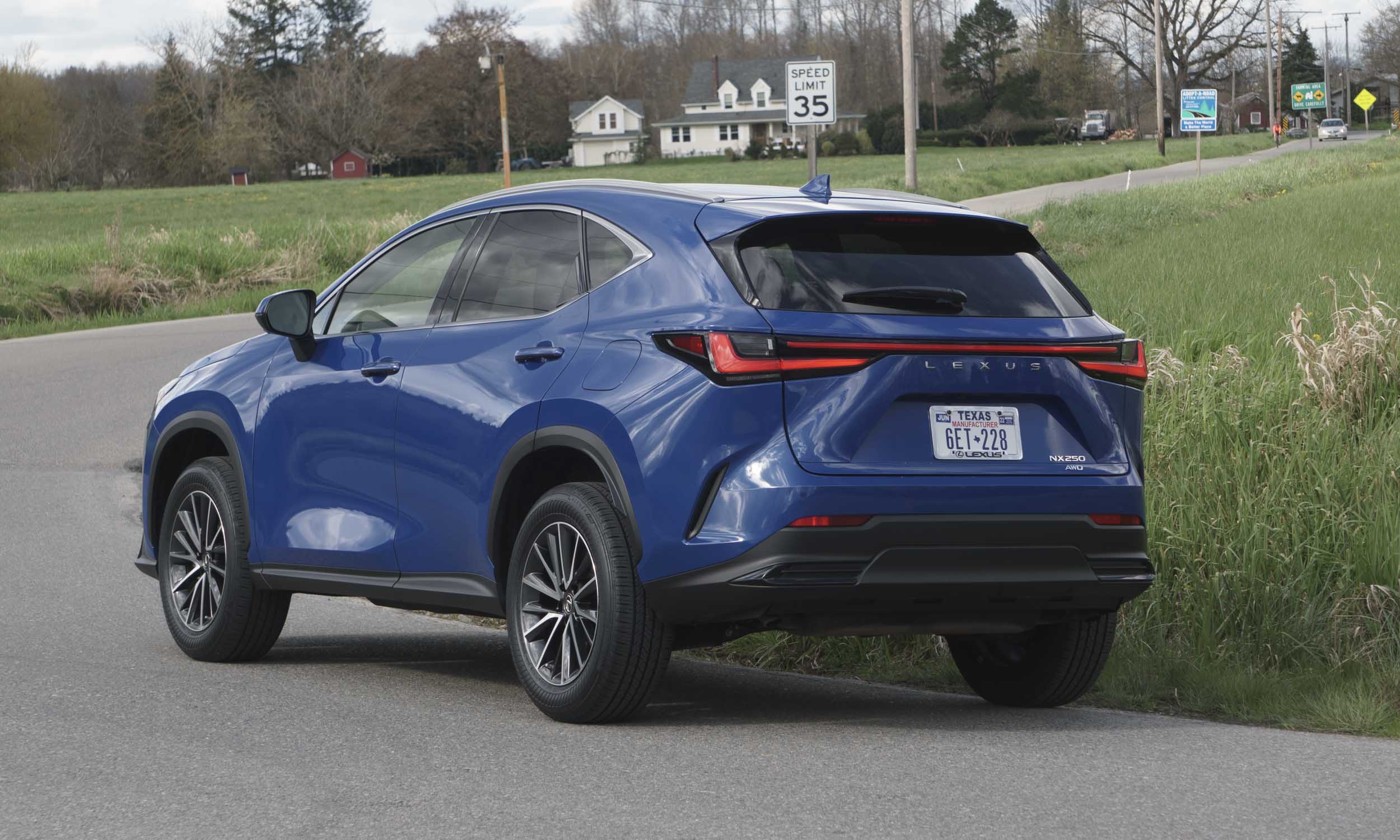 Rating: 8.0
For many luxury car owners in the U.S., Lexus is often their go-to brand, and the 2022 NX will certainly keep bringing customers into the fold as well as creating a quality introduction the brand. The updated design is attractive and the new interior is both comfortable and spacious. Although the base-level powertrain lacks grunt in some situations, Lexus does offer the NX with a variety of motivating options, including the efficient and powerful NX 450h+ plug-in hybrid. With an improved driver interface system and premium interior features, the 2022 Lexus NX continues to be a great option for luxury crossover shoppers. 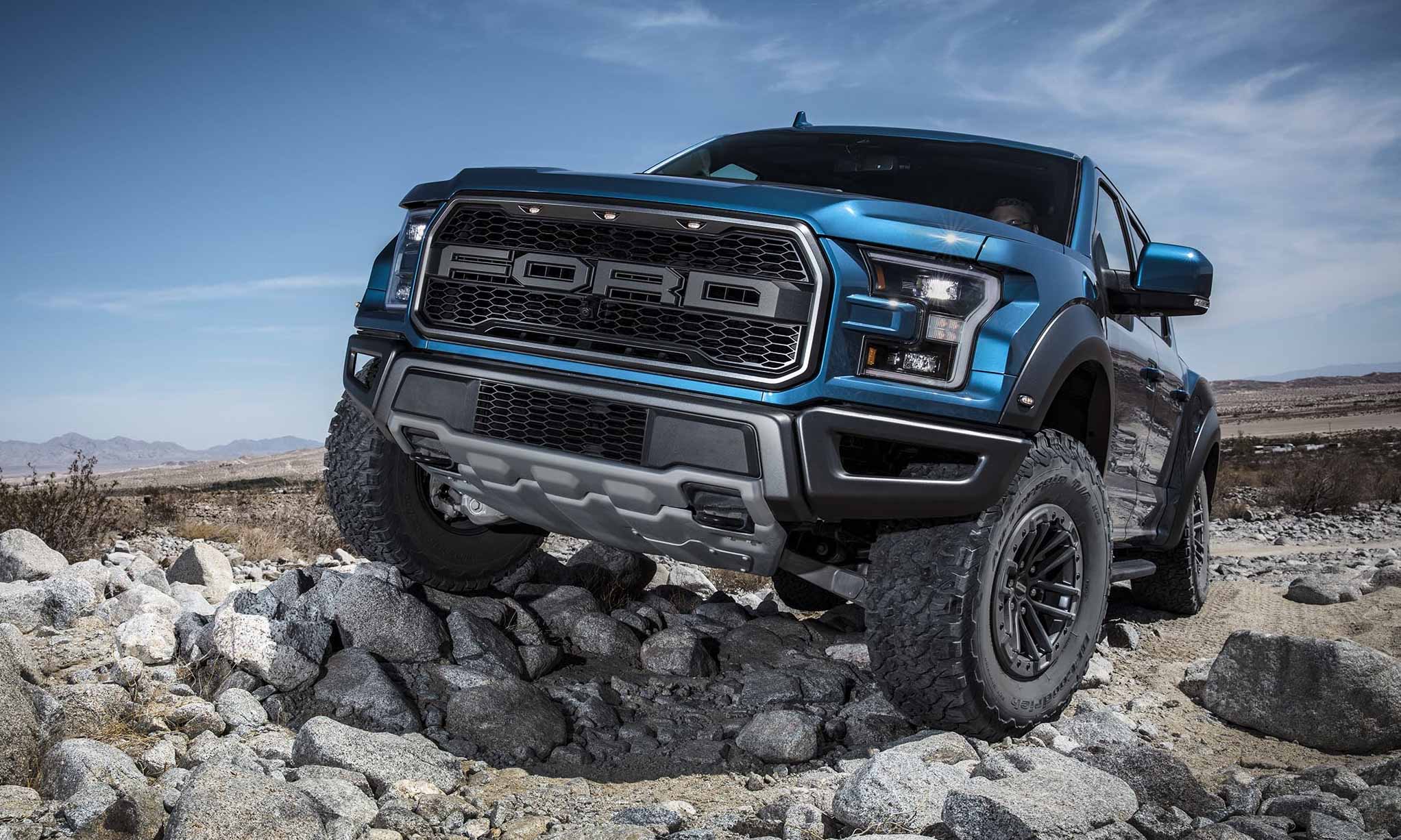