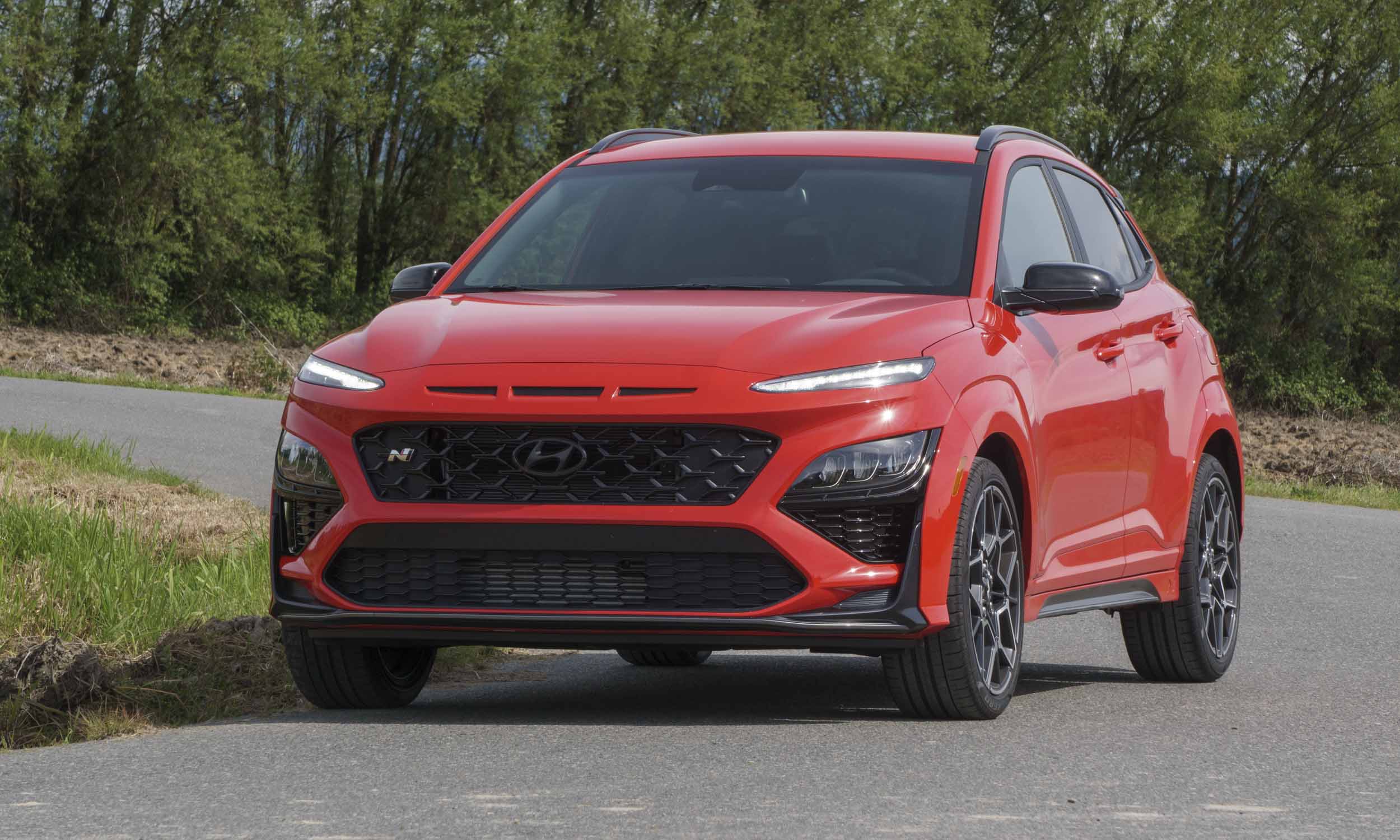 What Is It?
The Kona is Hyundai’s small, stylish 5-passenger crossover with updated styling for the 2022 model year. Add the letter N to the end of the name (along with a few goodies) and the Kona becomes a track-ready hot hatch with racing suspension, amazing handling and extreme performance. Hyundai plans a full line of high-performance N variants that currently includes Veloster and Elantra in addition to this crazy Kona. We spent a week with the 2022 Hyundai Kona N and the smiles still haven’t faded from our faces. 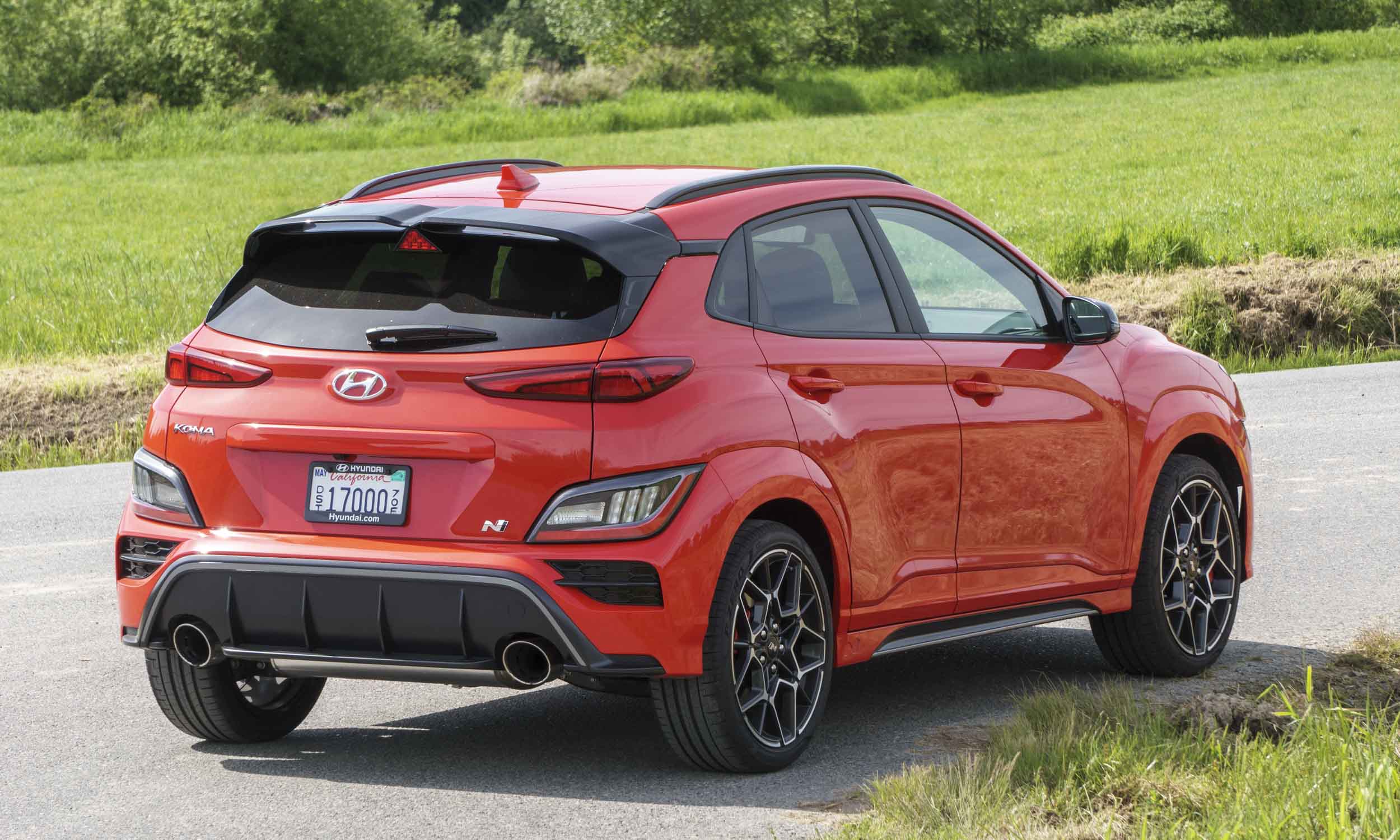 Test Vehicle
Hyundai provided us with a 2022 Hyundai Kona N painted appropriately in Racing Red. As the top-level trim in the Kona lineup, the N has no additional factory options. The total MSRP for the test vehicle came in at $35,445. There aren’t really any direct competitors to the Kona N since it outperforms most vehicles in its class. Crossovers with similar performance — such as the Mercedes-Benz GLA 35 AMG, MINI Countryman JCW, Alfa Romeo Stelvio or Audi SQ5 — all cost considerably more than the Kona N. 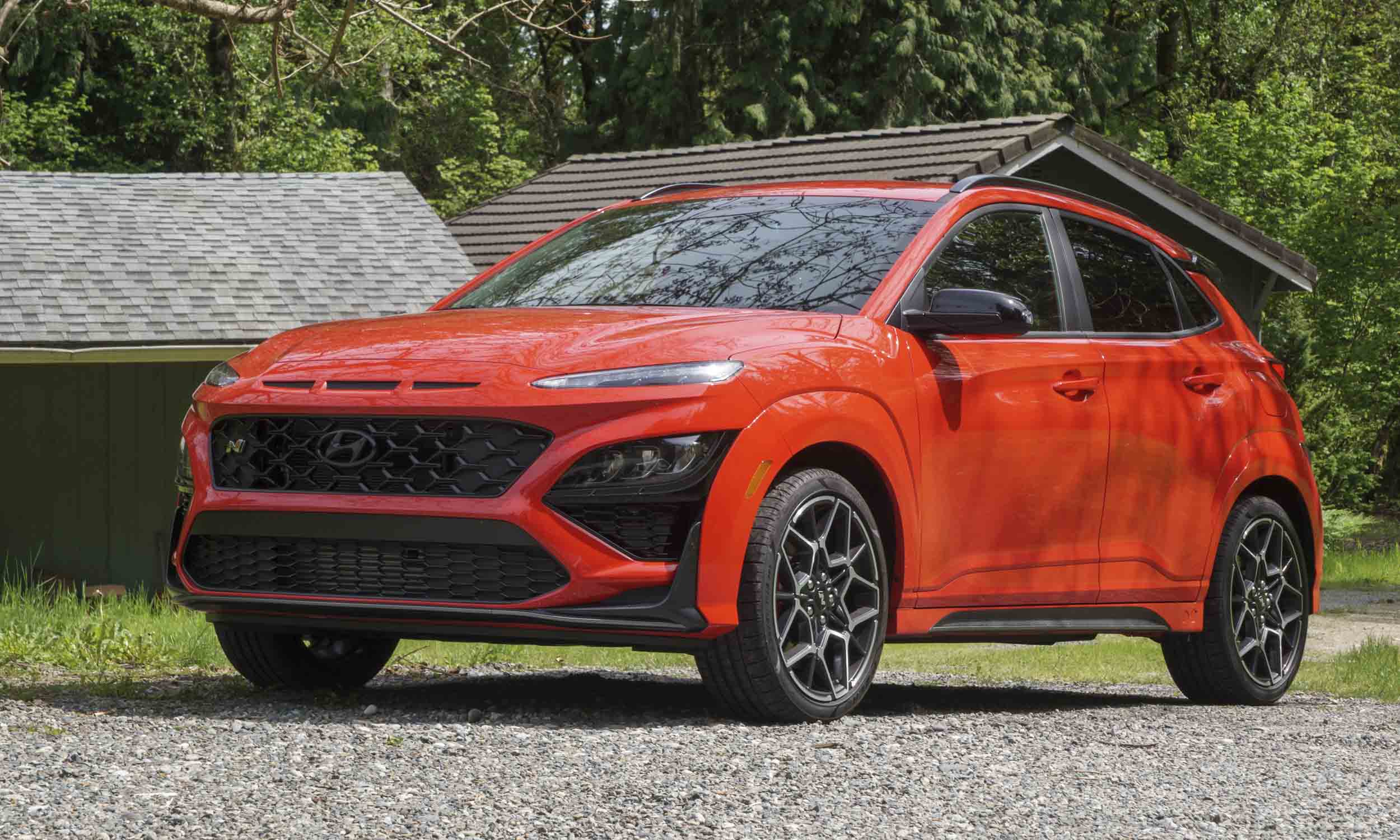 Hot SUV
“Kona N is a true hot SUV with the performance level of a hot hatch. It breaks the rule that SUVs are less fun to drive. As an N model, it goes beyond the limits of an ordinary SUV,” said Albert Biermann, president and head of the R&D division at Hyundai Motor Group. “Kona N can carve corners on the racetrack and bring excitement to everyday driving,” noted Biermann. We couldn’t agree more. 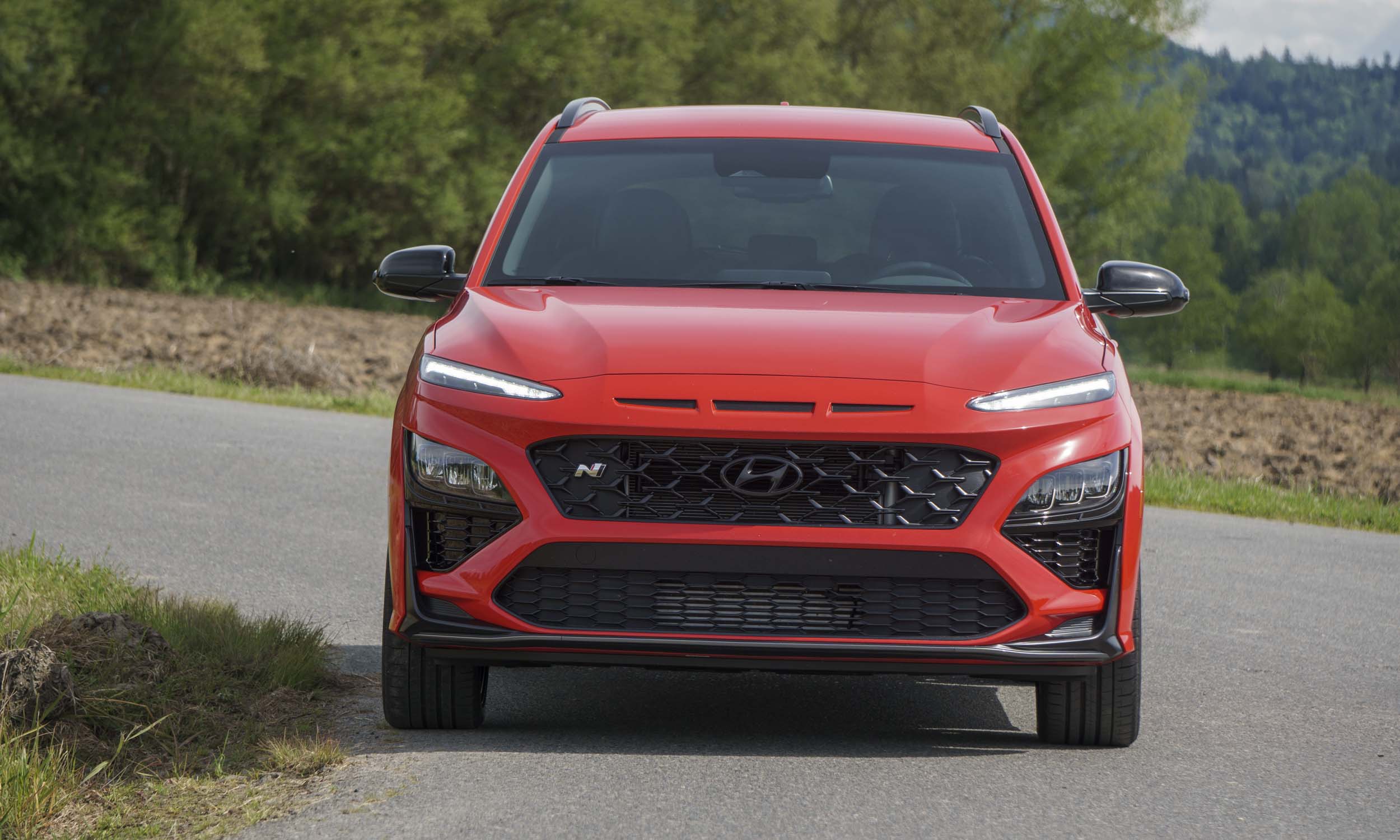 Racy Styling
The Kona has been refreshed for the 2022 model year, and it already stands out from other crossovers thanks to distinctive styling. The Kona N gains additional differentiation as a high-performance model via body-color fenders that give the vehicle a wider stance as well as the unique front fascia, side skirts and rear valance. The large Hyundai logo has been moved to the center of the grille, and three vents (nonfunctional — simply for show) between the lights add sporty flair. A wide lower intake provides additional airflow to the Kona N’s more powerful engine. 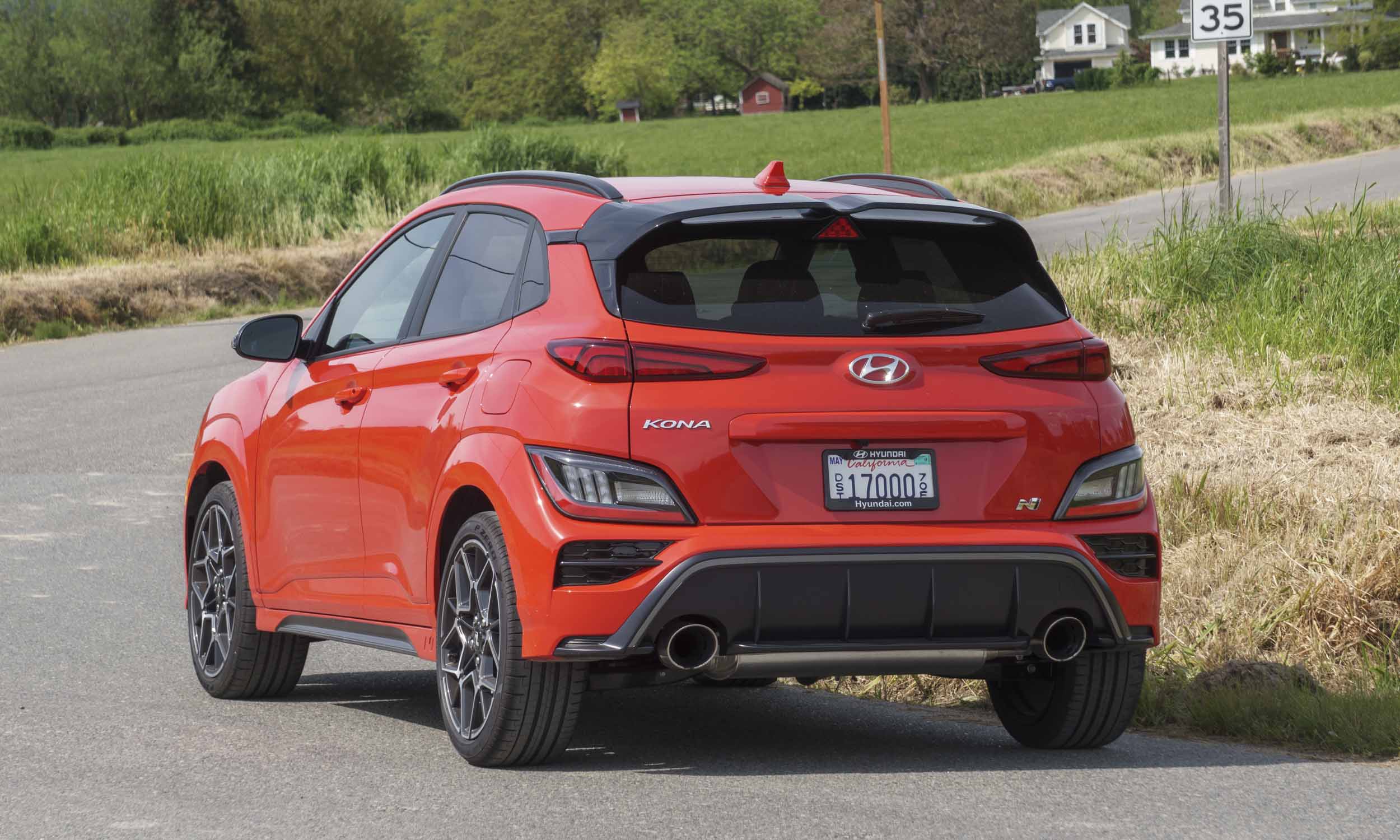 Rear View
The rear view of the 2022 Hyundai Kona N also reinforces this crossover’s performance orientation thanks to a double-wing roof spoiler that features a unique triangular brake light. Two large exhaust outlets anchor the sporty rear view, and the angry sound that emanates from them at full throttle will certainly turn heads. 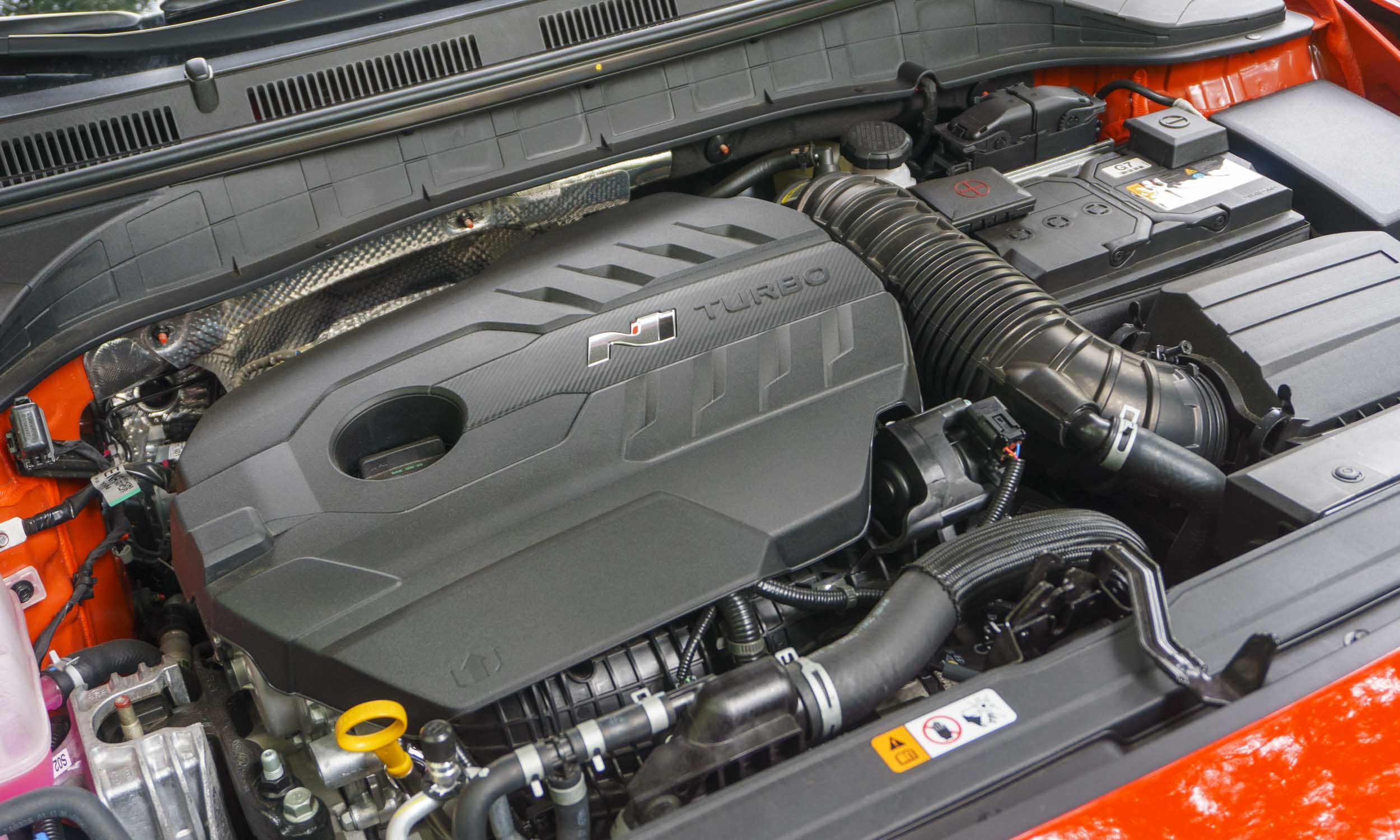 Under the Hood
The 2022 Hyundai Kona N draws power from a 2.0-liter turbocharged GDI 4-cylinder engine producing up to 276 horsepower and 289 lb-ft of torque delivered to the front wheels. This powerful engine gets teamed with an 8-speed wet dual-clutch transmission enhanced to handle high-performance demands. 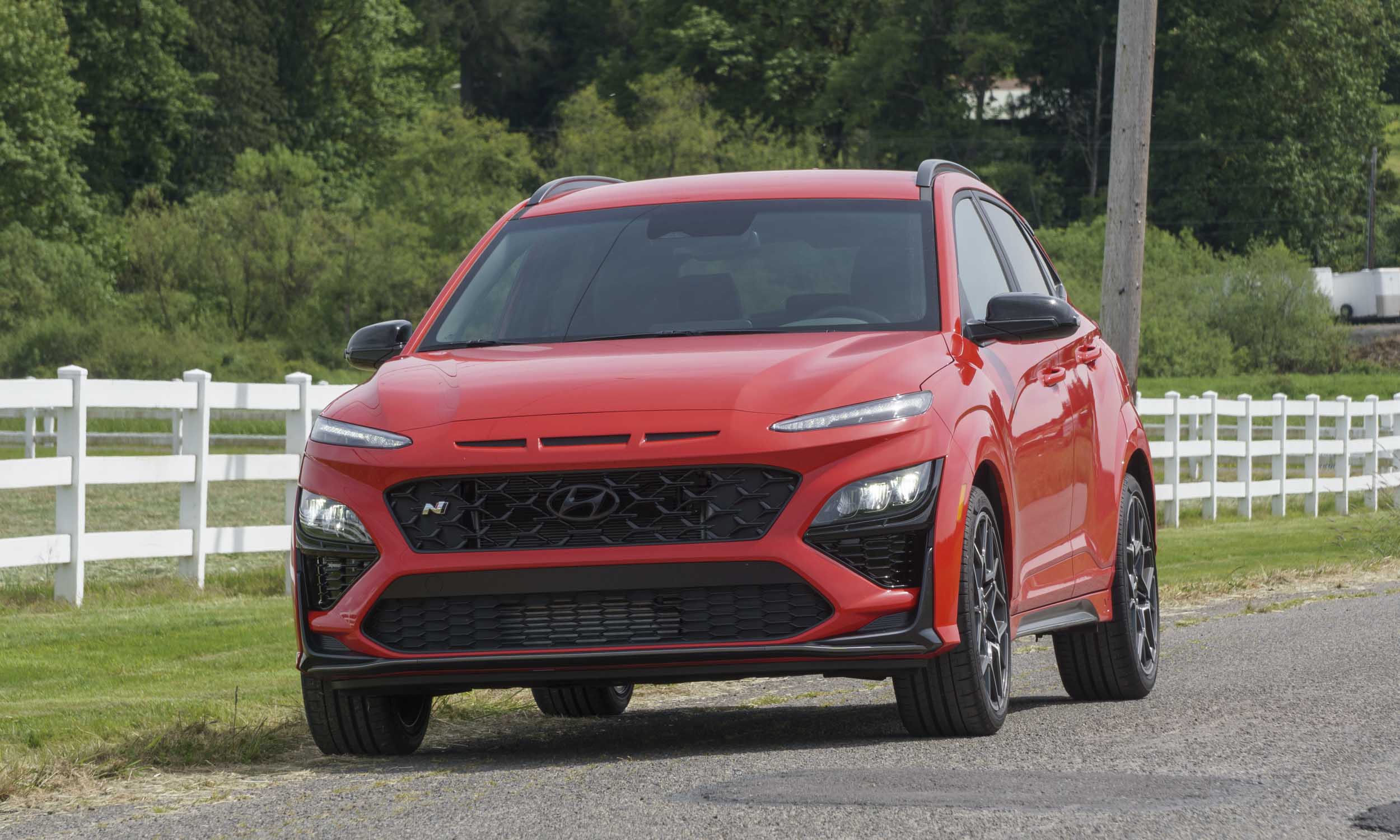 Performance
Hyundai says the Kona N will sprint to 62 mph in 5.5 seconds on its way to a top speed of almost 150 mph. Although we didn’t (and wouldn’t) test for top speed on public roads, acceleration to 60 mph in the Kona N feels quicker than the reported number. But the Kona N is about more than just straight-line speed — it really comes alive through turns. 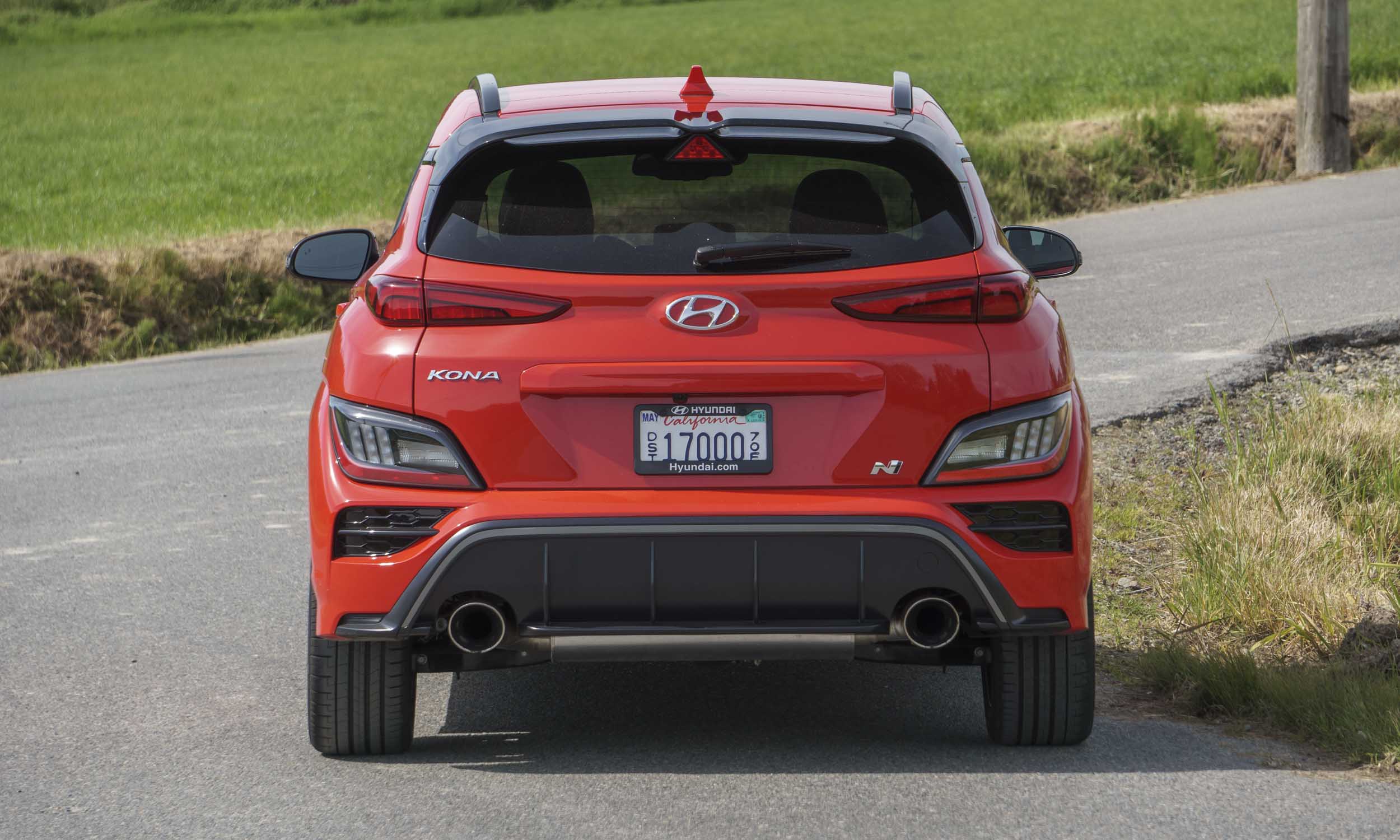 Not Just More Power
In addition to the turbocharged engine, the Kona N gets an electronic limited-slip differential that distributes power for better handling, especially in corners at speed (Hyundai calls it the “N Corner Carving Differential”). Clearly not a typical Hyundai, the Kona N also gets launch control and a variable exhaust system as standard equipment, along with high-performance brakes and 19-inch lightweight forged wheels shod with high-performance Pirelli P Zero tires. Extra welding points, an improved strut ring structure and a reinforced frame provide higher levels of rigidity for improved handling and performance. 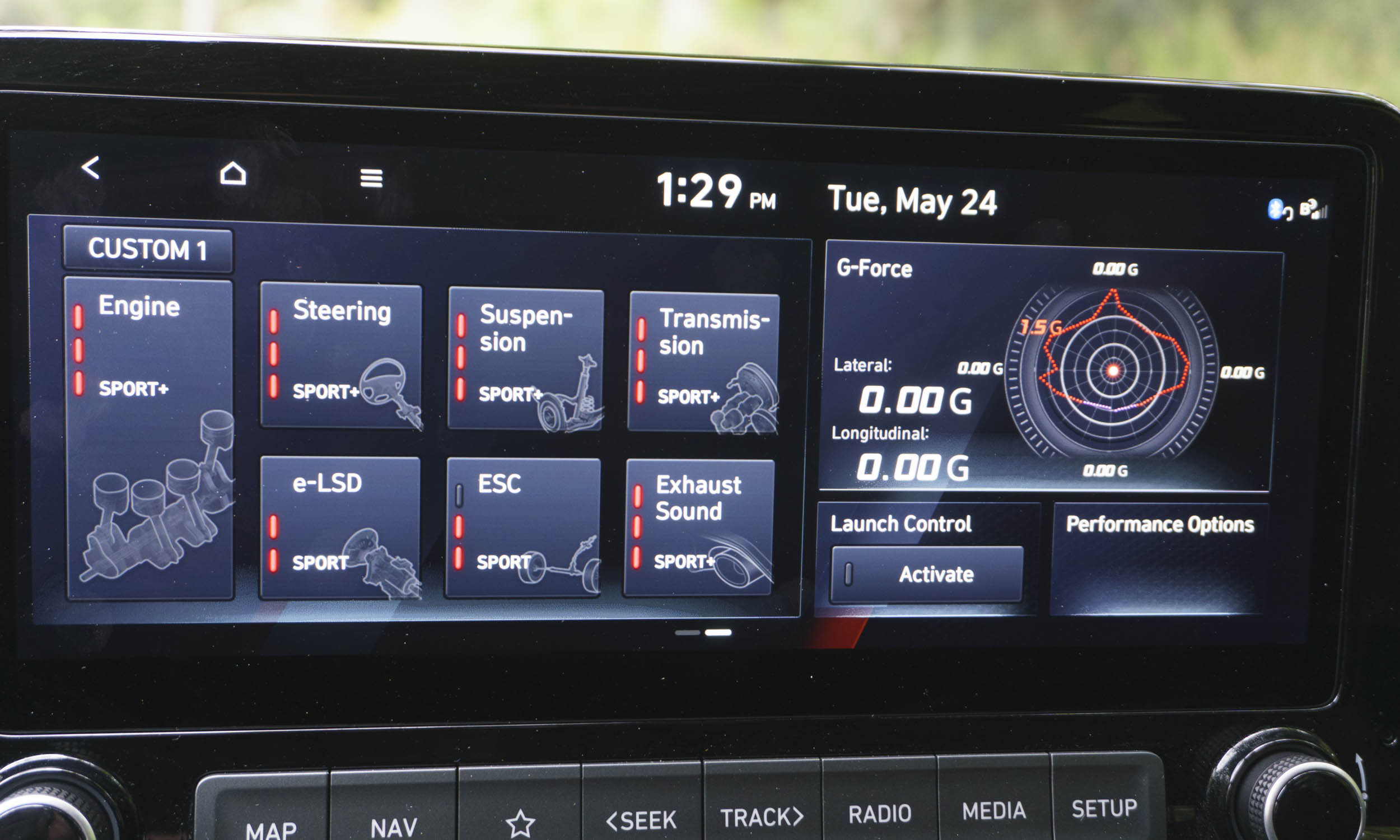 N Mode
For the 2022 Hyundai Kona N, the automaker offers a level of customization referred to as N Grin Control. The system features five drive modes: Eco, Normal, Sport, N and Custom. These modes adjust the engine, stability control, exhaust note and steering to provide an appropriate level of performance depending on driver wishes. Selecting N mode in the center display provides track maps and lap times, and also allows the driver to create a custom setup by selecting the level of performance for these items. 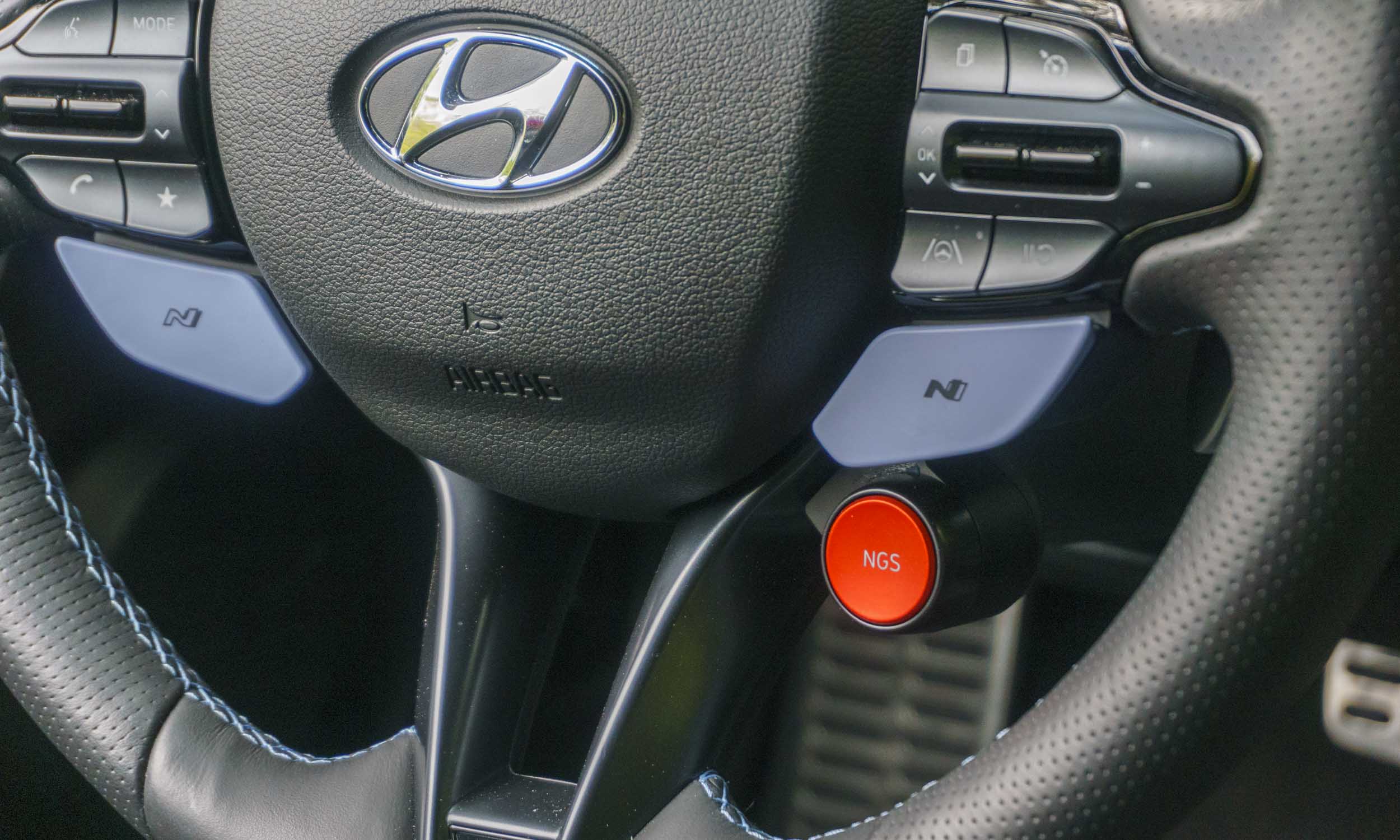 N Grin Shift
Growing up we spent plenty of time playing driving games at arcades, and most of those vintage games contained a popular turbo boost button. And with the Kona N, gamers get to relive their childhoods with a real power boost button. Called the N Grin Shift, the large red button on the steering wheel adds 10 horsepower for 20 seconds. Honestly, when pushing the button it’s hard to discern the bump in horses, but the whole idea of a real turbo boost button makes the kid inside happy so who cares? 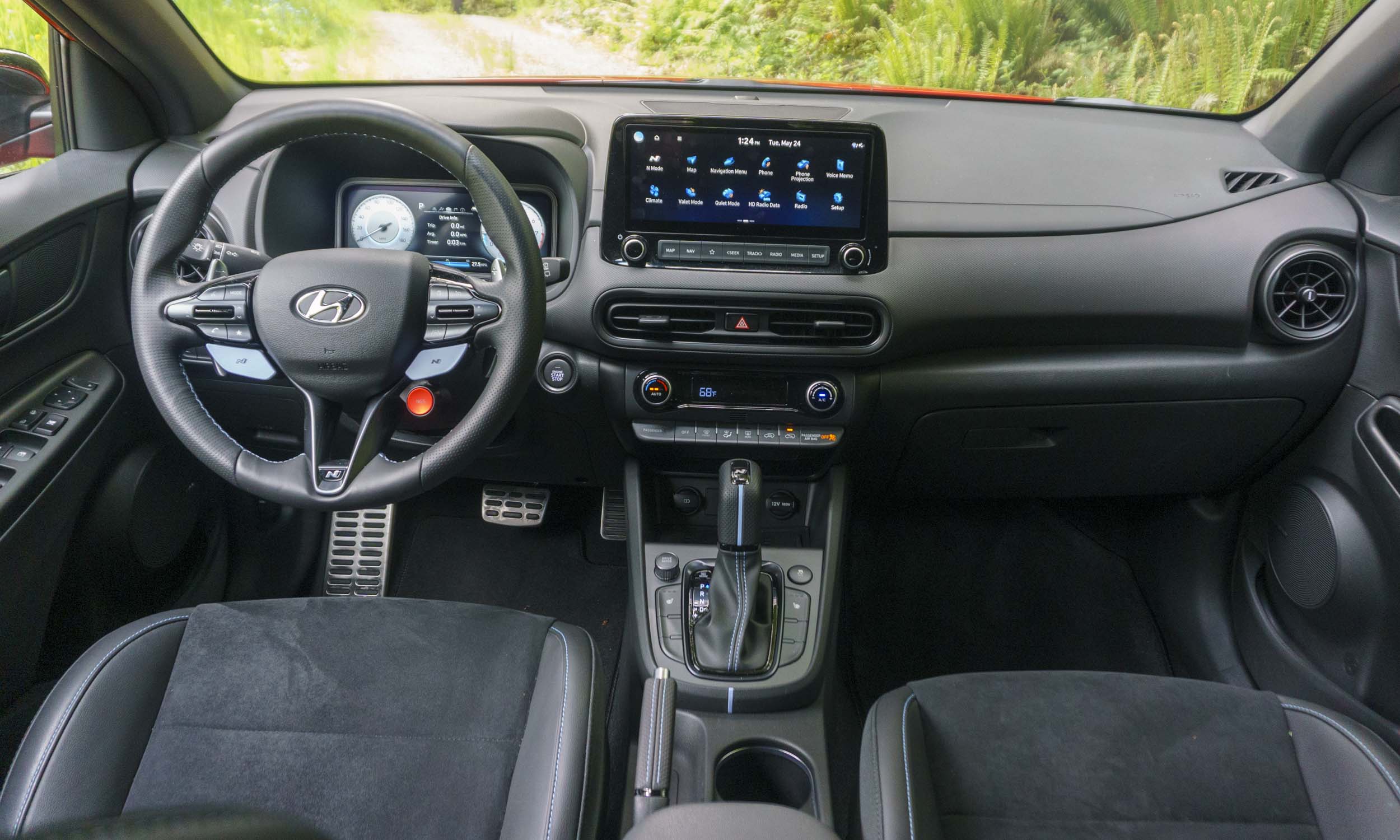 Inner Space
The Kona N features both a 10.25-inch center touchscreen as well as a 10.25 inch driver display to give the Kona a modern, high-tech look. Hyundai’s infotainment system is one of the better ones on the market with intuitive navigation aided by physical buttons at the bottom of the screen for quick access to radio and navigation. Dedicated volume and tuning knobs are becoming less common in new models, so we’re pleased Hyundai keeps them around. Climate controls live below to keep things simple for easy use. 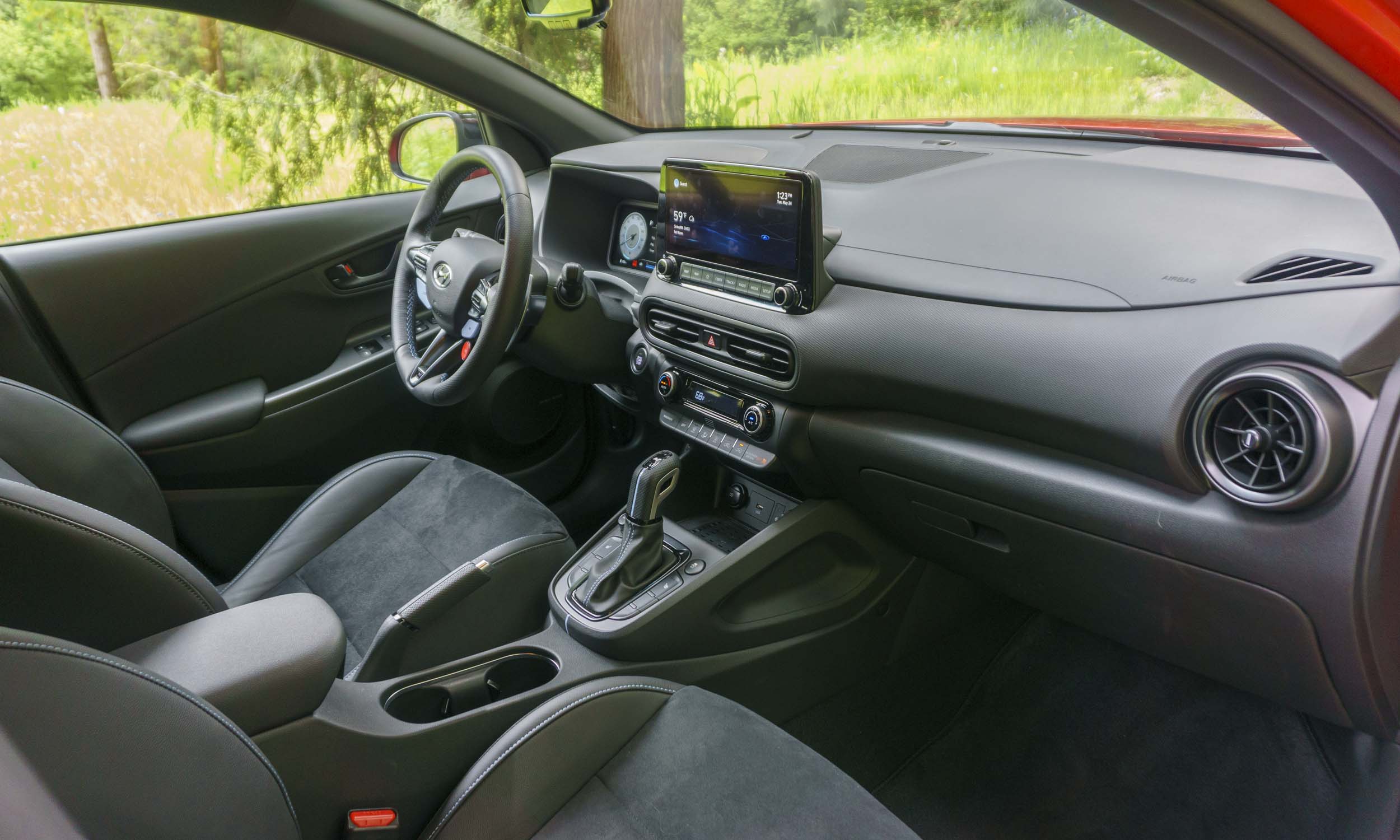 The N Difference
Even though the vehicle’s basic interior is the same as the rest of the Kona lineup, the N stands out a bit thanks to Performance Blue accents throughout the cabin, including stitching on the steering wheel, shifter and seats. Also unique to the Kona N are the customizable blue N buttons on the steering wheel that allow drivers to quickly select preset drive modes. And, of course, there’s that big red NGS button. The driver display can also be configured to match the driving mode. 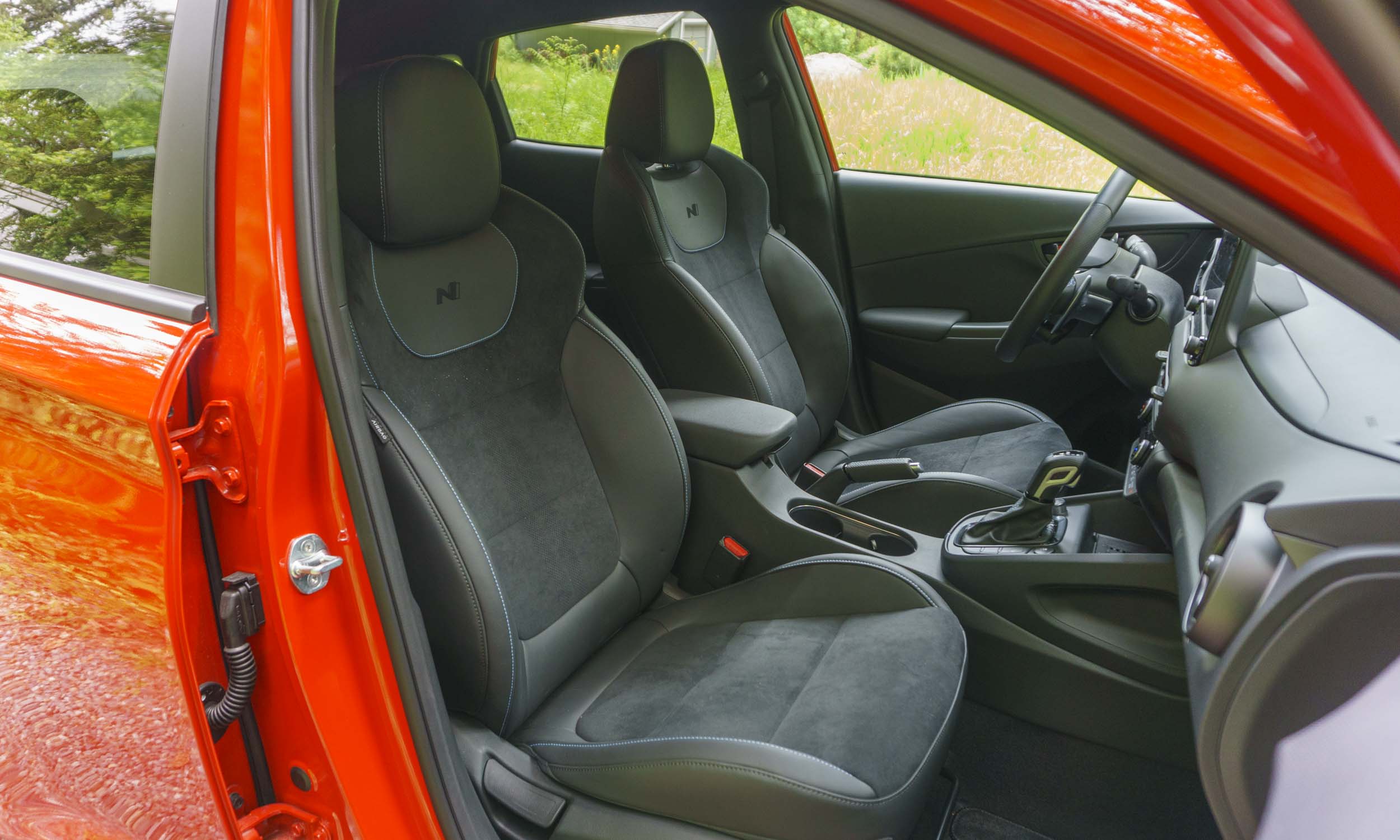 Sport Seats
Contributing to the sporting nature of the Kona N are standard N sport bucket seats emblazoned with the N on the seatbacks. The cushions are not overly stiff yet offer decent support with prominent back and thigh bolsters. 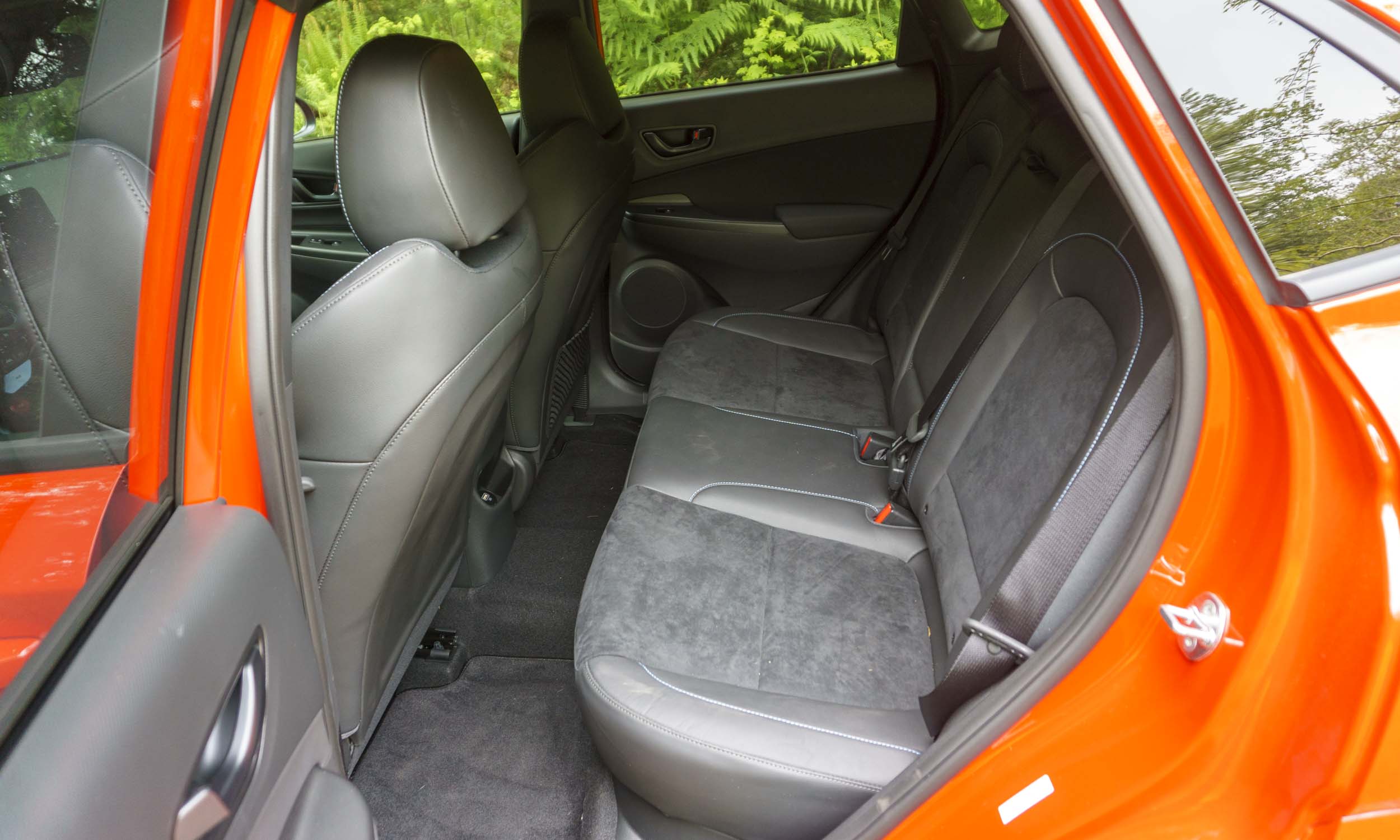 Rear Seat
It may have the soul of a sports car, although the Kona N remains a right-sized crossover, so it has plenty of room in the rear seat for at least two adults to join the fun. Not surprisingly, the middle seat has limited legroom and is really meant for children or, if necessary, an adult for a short drive. 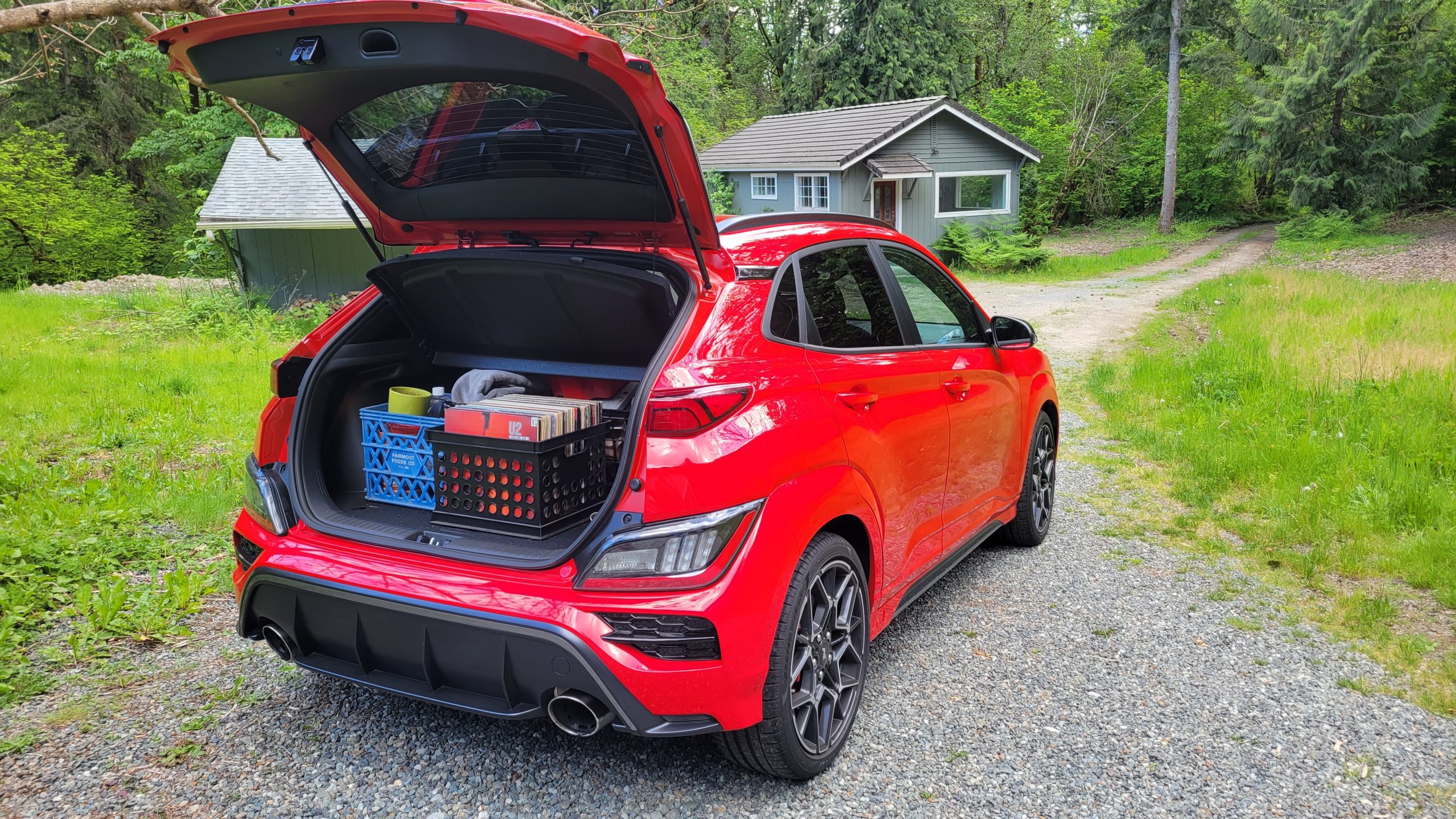 Plenty of Utility
The Kona offers a surprising amount of space in the cargo area — plenty of room for a few pieces of luggage or other gear. With the rear seats folded, the Kona N is perfectly suited to move more formidable items such as multiple boxes and crates during a house move, for instance. 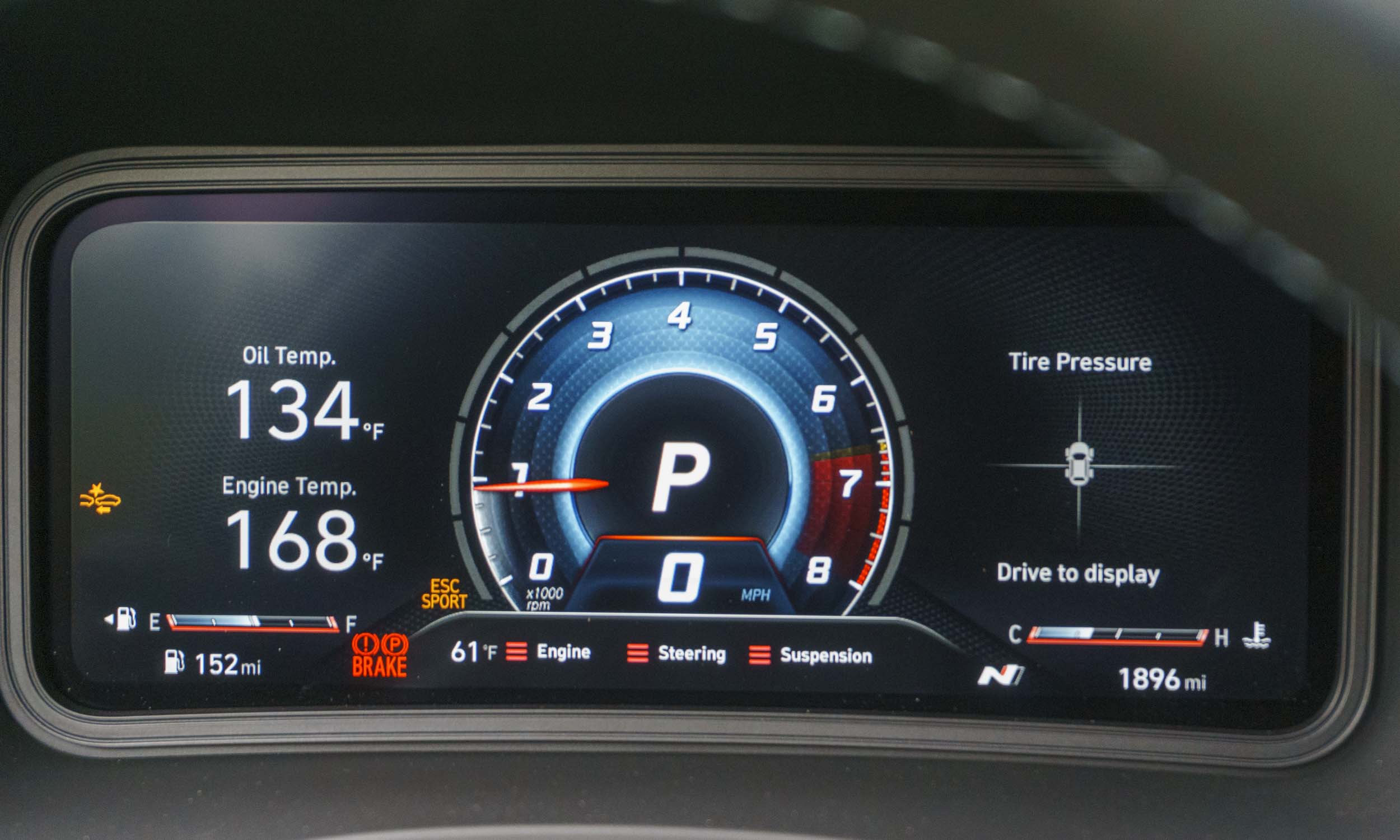 Going to Extremes
Shortly after we slid behind the wheel of the 2022 Hyundai Kona N, it was time to see what this hot hatch could do. The right-hand N button on the steering wheel put every component to its highest performance level, and pressing it was akin to feeding the Kona about 10 energy drinks. The exhaust note increases and the throttle response becomes instantaneous along with quick acceleration. Left to shift on its own, the transmission takes the engine to redline before bumping up a gear, and the suspension is so taut the driver can feel every bump and crack in the road. 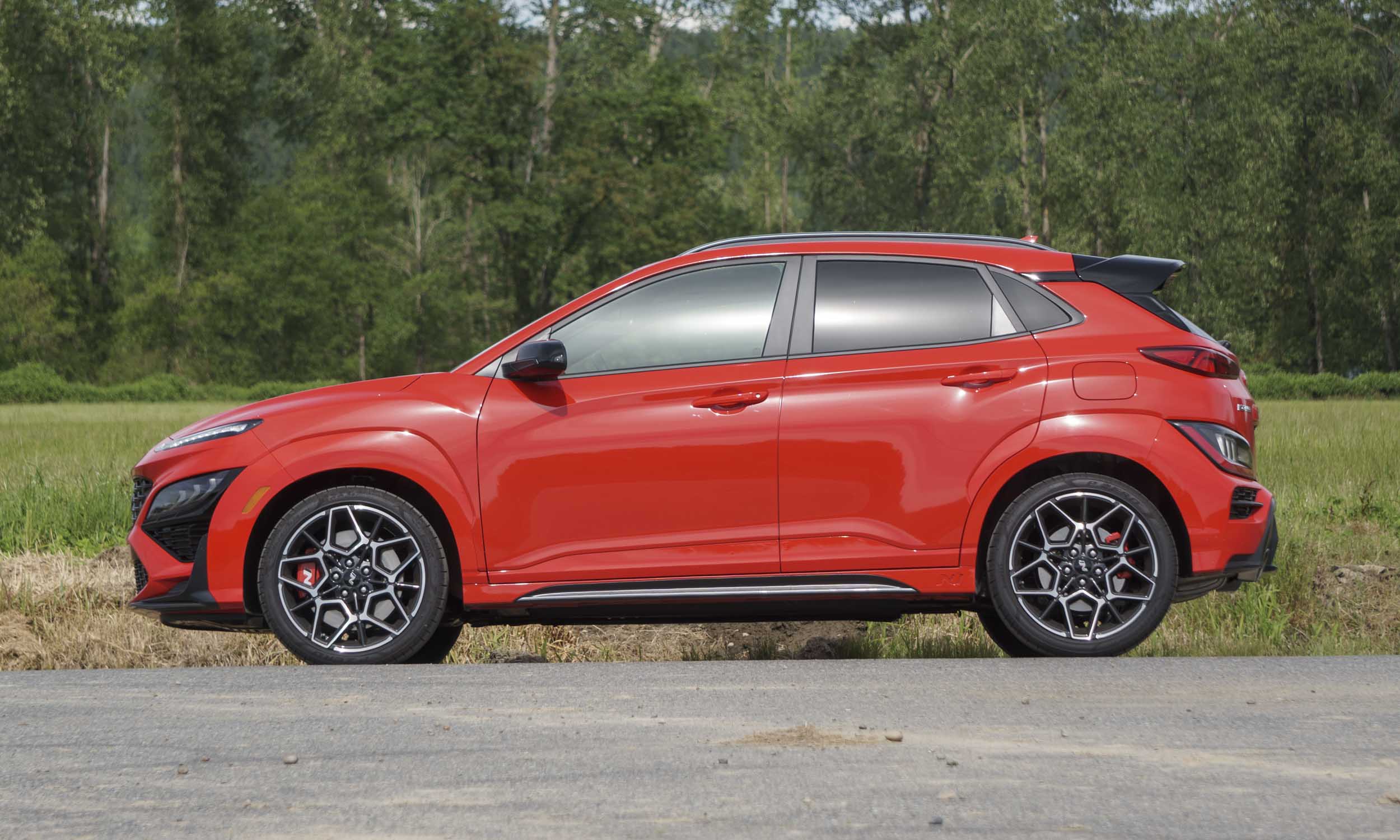 So Much Fun
Driving on some of our favorite back roads in the Pacific Northwest, we discovered the Kona N is really a track car disguised as a crossover. The Kona N possesses plenty of power on tap, and it stays flat and stable even when driven deep into corners. Acceleration out of corners is equally impressive, highlighted by impressive grip thanks to the sticky tires and the limited-slip differential. Transmission shifts are lightning fast. We used the paddle shifters for a short time, but ultimately gave in to a gearbox that upshifts and downshifts better on its own. Brakes are strong with no fade, even after pushing the diminutive Kona N pretty hard. This makes sense since the brakes are designed to survive a day at the track. 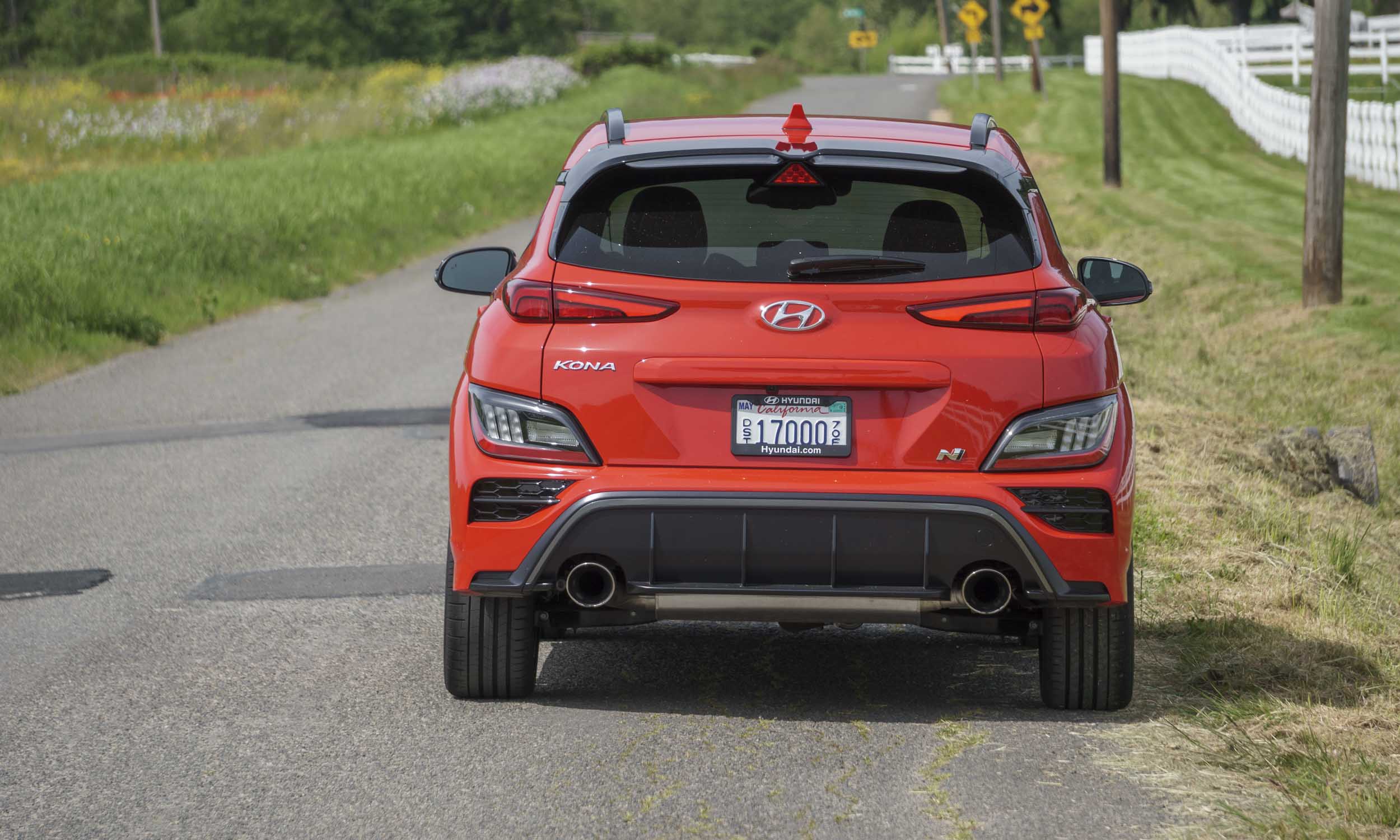 For Everyday Aficionados
No question, the Kona N is one of the most fun cars we’ve experienced — and we’ve experienced many — especially for the price. We also appreciate that the Kona N is a vehicle that can be driven every day. Going from N mode to Comfort mode, it almost feels as if Kona N has emitted a sigh of relief, relaxing until the next white-knuckle bit of fun. In Comfort mode the car becomes quiet and comfortable with a relatively smooth ride; still a bit stiffer than the standard Kona, but much less manic. The Kona N easily and stealthily runs errands, hauls boxes and even makes runs to the airport without so much as a blip of complaint as a mild-mannered daily driver, even delivering fuel economy in the mid-20 mpg range. 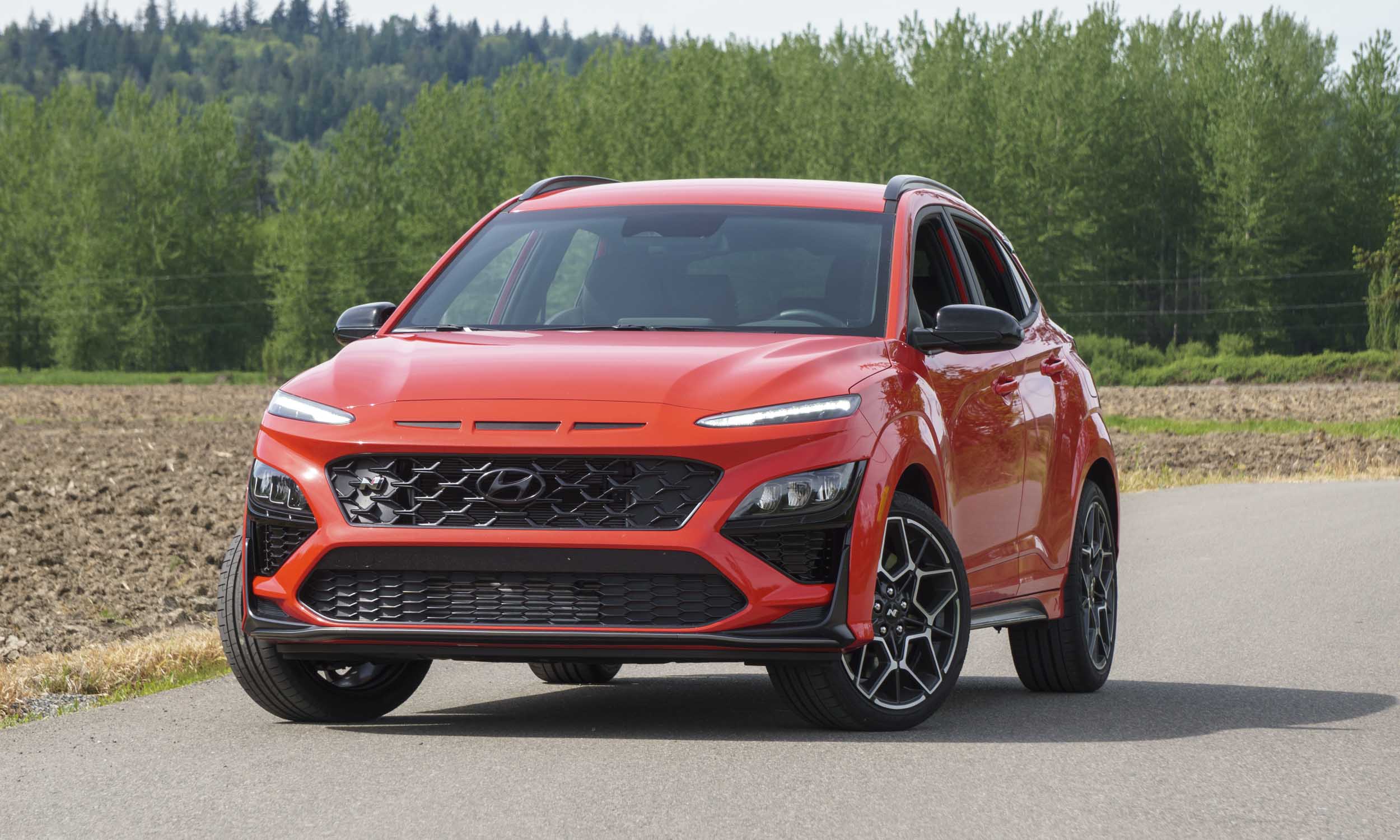 Rating: 9.0
The 2022 Hyundai Kona N is easily one of the most entertaining vehicles we’ve driven, and the fact that it’s affordably priced and offers so much more than raw performance makes it even more desirable. The N treatment makes it stand out enough to showcase its abilities without being embarrassing, and the interior is stylish and comfortable with the latest entertainment and safety tech. Useful as a daily driver, the Kona N can transform into an extreme performance machine with the push of a button — instantly ready for road or track, delivering so much good fun enthusiast drivers will be unable to stop smiling. 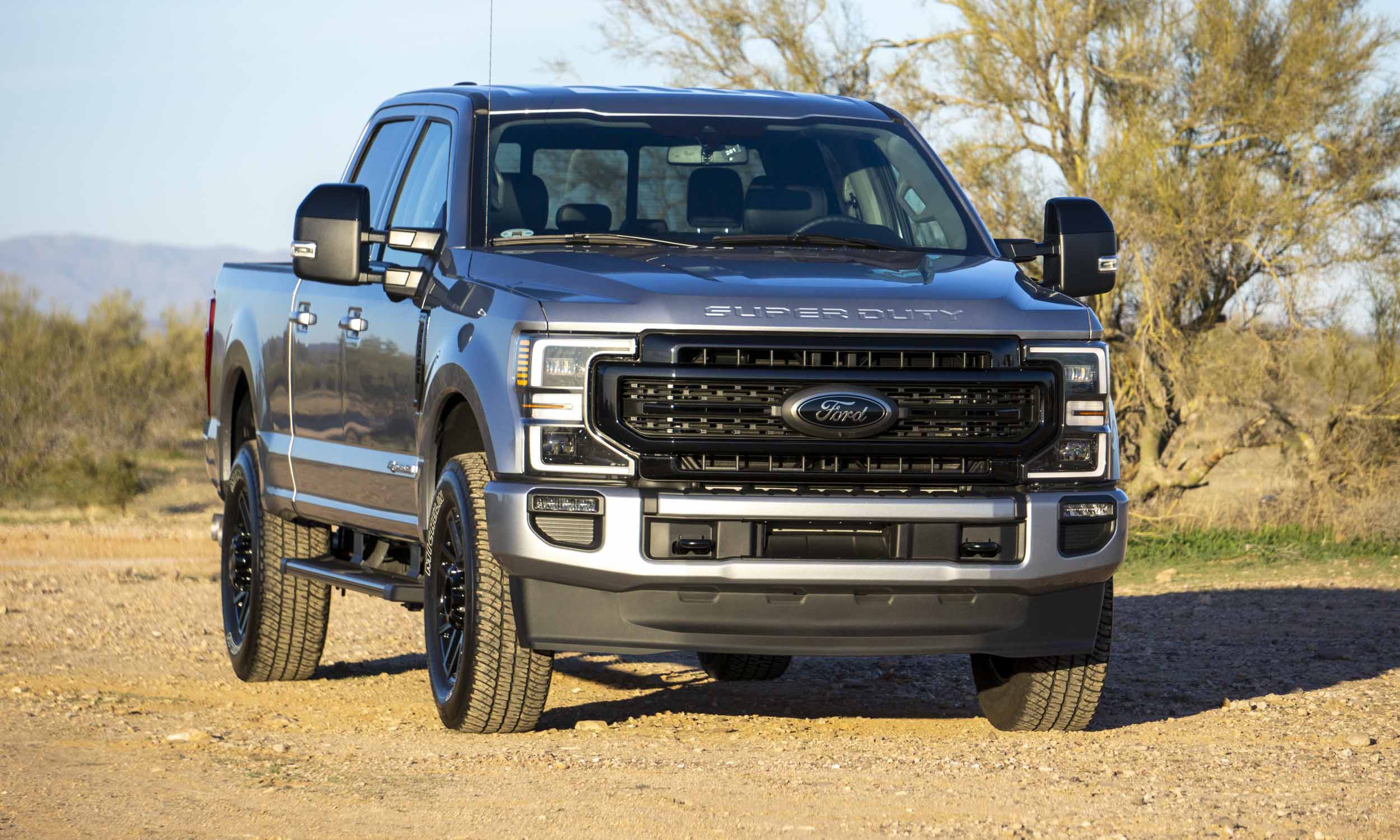 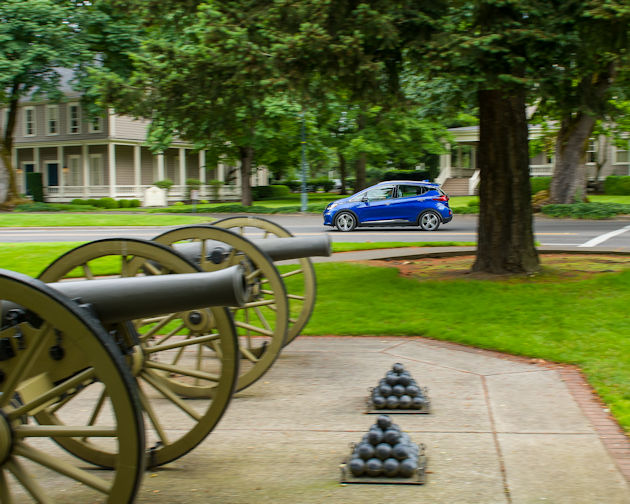