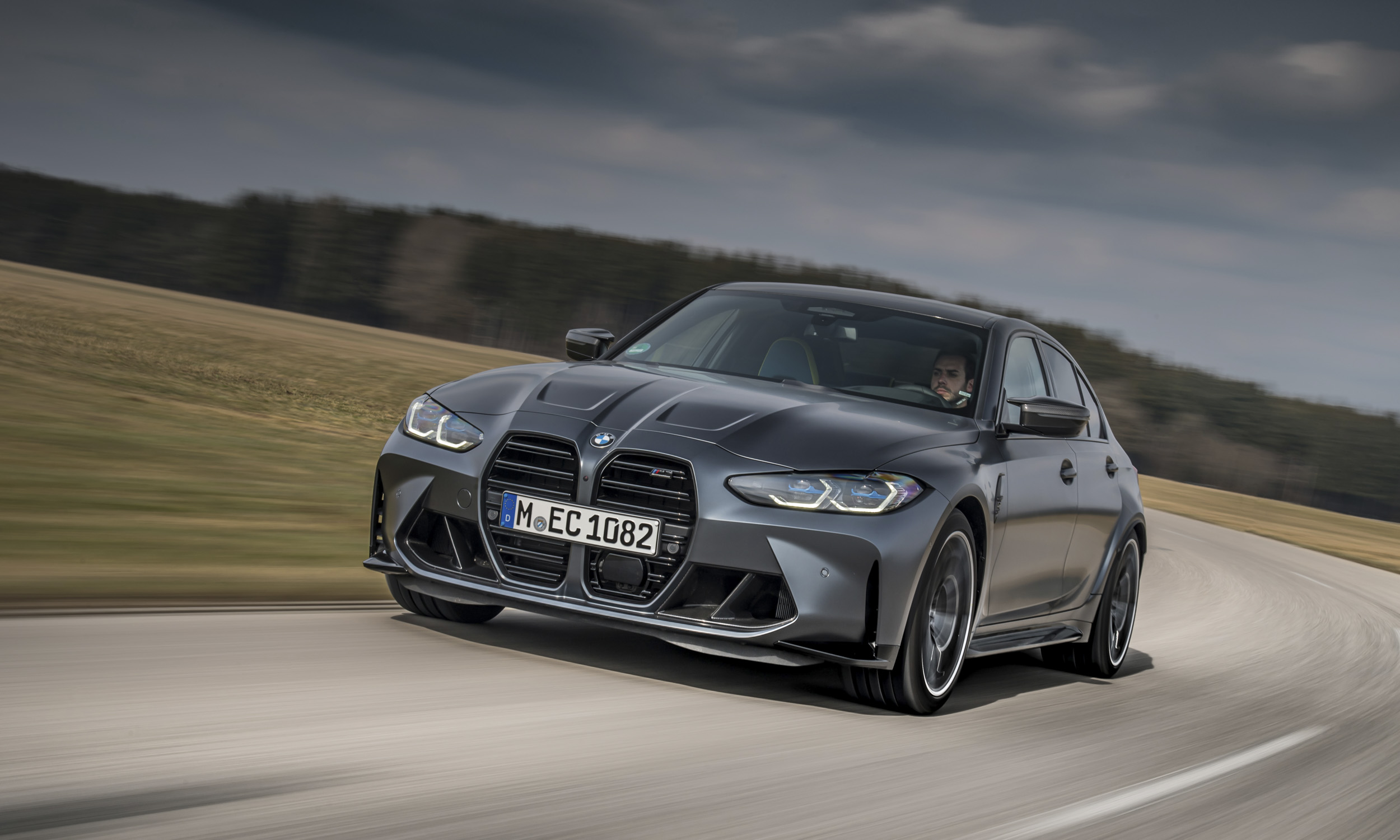 2022 BMW M3 Competition xDrive
The latest generation of BMW’s high-performance 3 Series M3 arrived in September 2020 as a 2021 model. For 2022 the BMW M3 Competition xDrive joins the German automaker’s lineup — the first time BMW has ever offered the M3 with xDrive all-wheel drive. The addition of M xDrive allows drivers to take full advantage of available power during acceleration and dynamic driving. 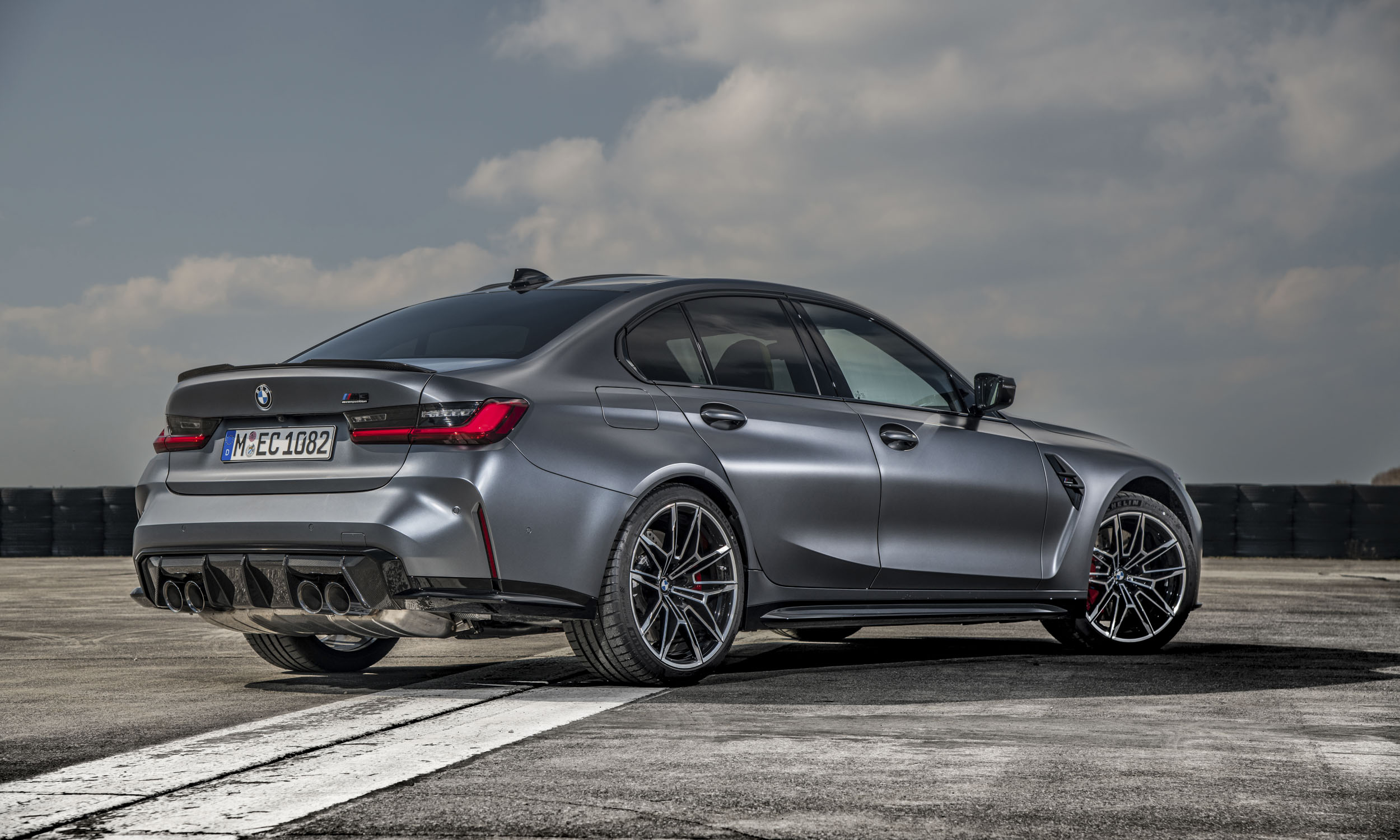 2022 BMW M3 Competition xDrive
BMW invited us to experience the M3 Competition xDrive on the roads around Palm Springs, California, as well as on the track at The Thermal Club, home of the West Coast BMW Performance Center. The M3 Competition is right at home on the streets of swanky Palm Springs, but it really shines on the racetrack, where we had the opportunity to experience the car’s full potential both from the driver’s seat as well as while riding along with BMW’s professional race drivers. 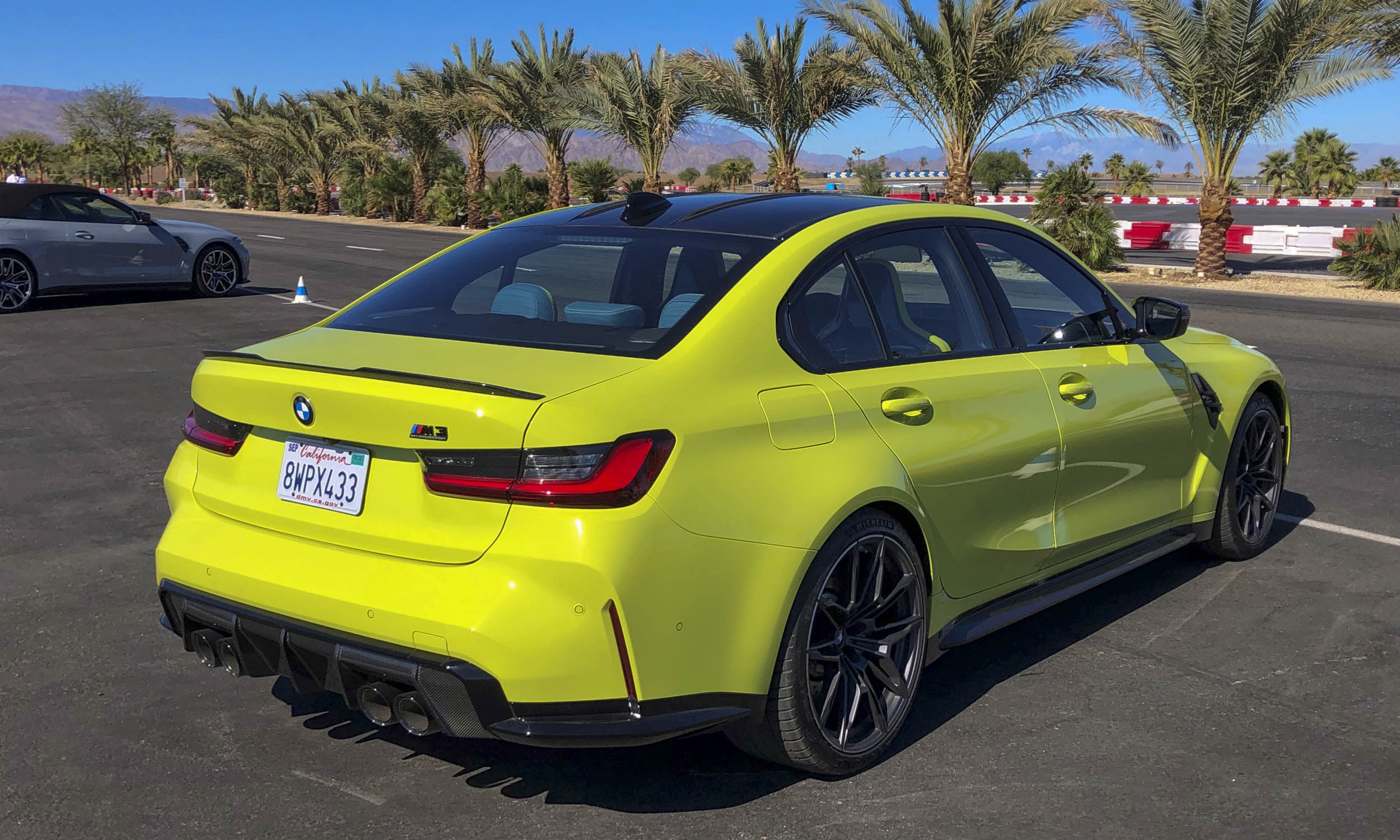 Model Lineup
The 2022 BMW M3 lineup starts at $69,900 for the M3 Sedan and $72,800 for the M3 Competition. The new 2022 M3 Competition xDrive sedan starts at $76,900. Prices do not include $995 destination charge. The test car we drove was the 2022 M3 Competition xDrive finished in Sao Paulo Yellow with Yas Marina Blue / Black leather. Additional options included M carbon bucket seats, an M Driver’s Package, an M Carbon Exterior Package, the Executive Package and carbon fiber trim and for a total MSRP of $95,895 including the destination charge. 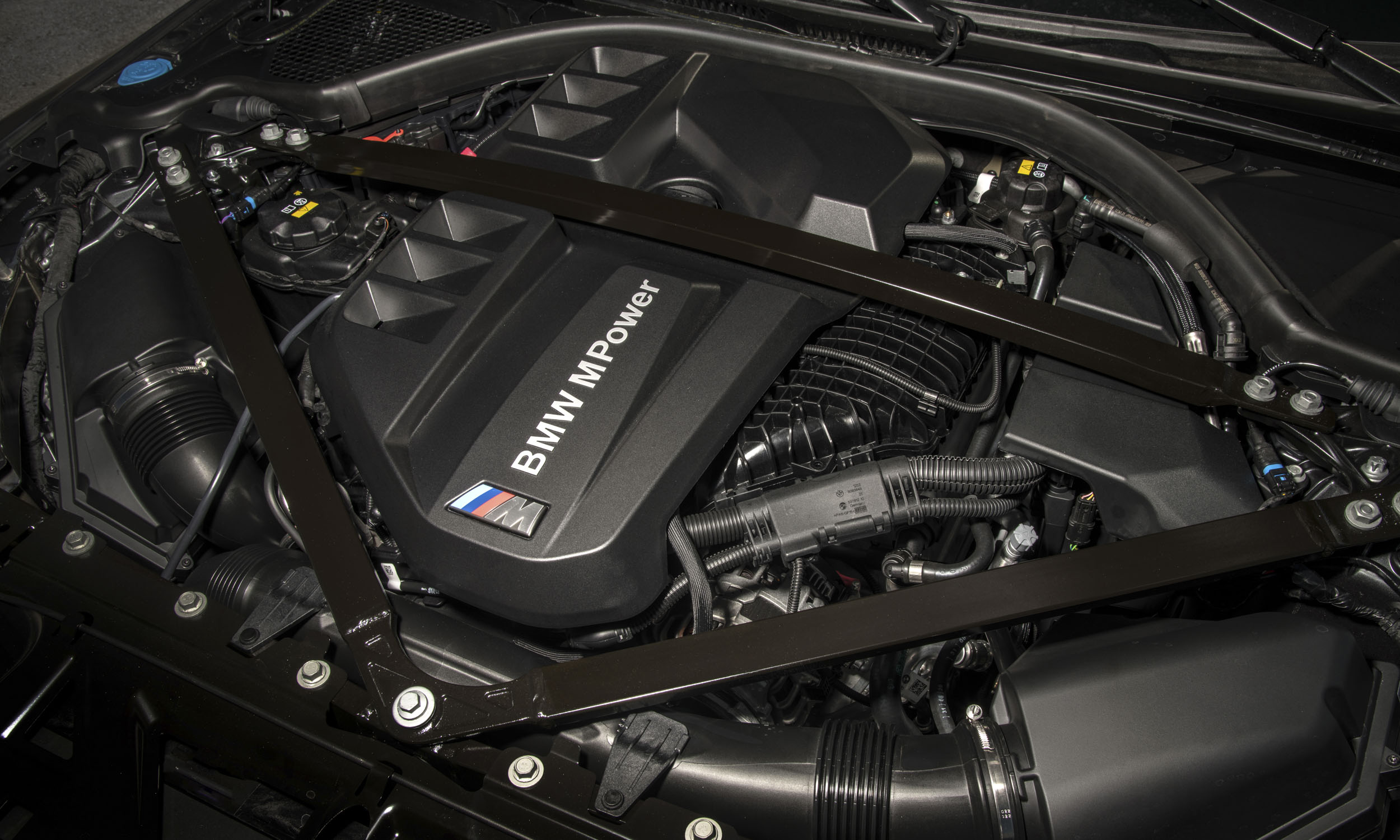 Under the Hood
The powerful 3.0-liter turbocharged inline 6-cylinder engine of the M3 Competition produces 503 horsepower and 479 lb-ft of torque from 2750 rpm all the way to 5500 rpm. Power gets delivered through an 8-speed M Steptronic automatic transmission, the M xDrive and an M Sport rear differential. According to BMW specs, with the M xDrive the M3 Competition will accelerate from zero to 60 mph in a mere 3.4 seconds — 0.4 seconds quicker than the rear-wheel-drive M3. 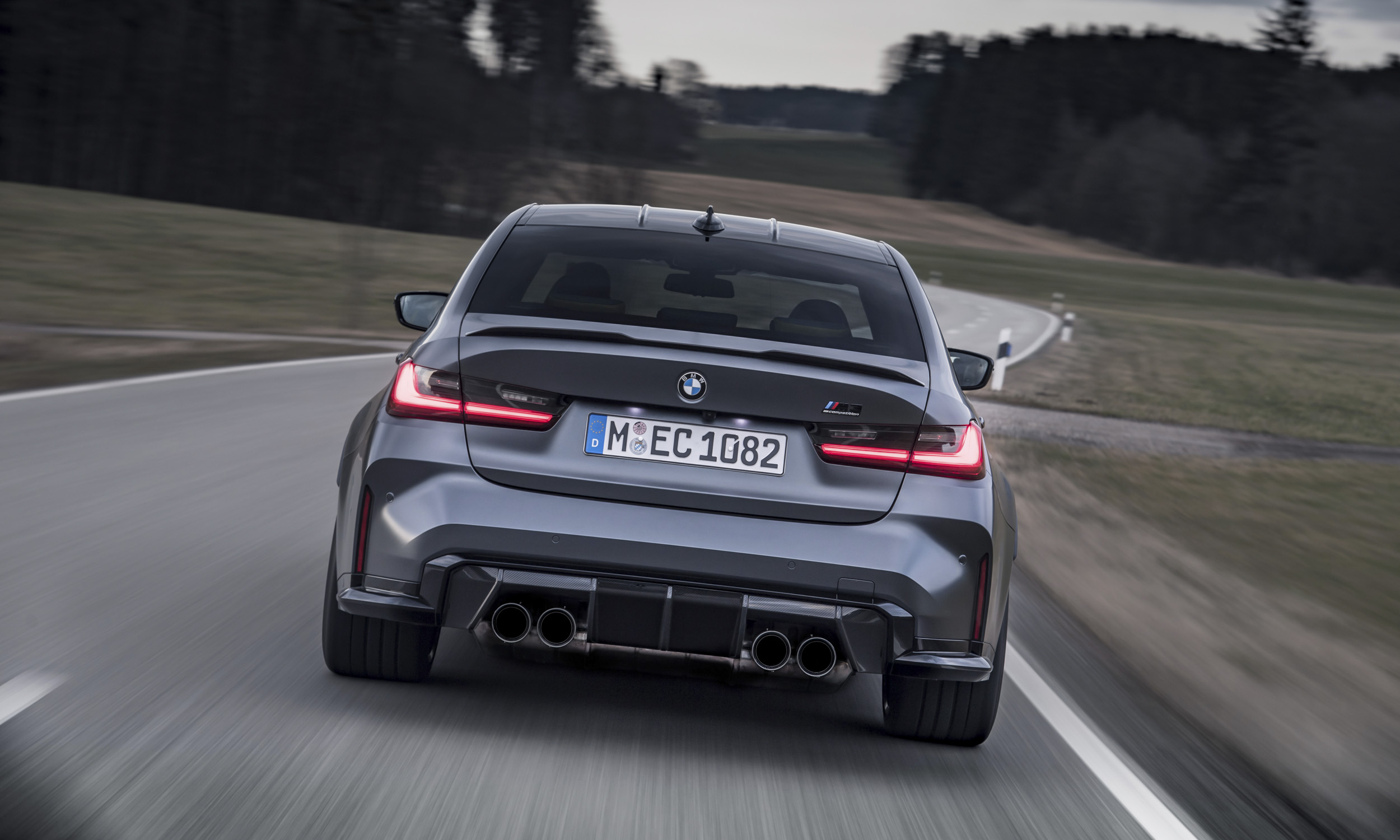 M xDrive
The M xDrive in the Competition is a fully variable rear-biased system that utilizes an electronically controlled multiplate clutch to distribute torque between the front and rear axles, while the Active M rear differential distributes torque side to side. Under normal driving conditions, all torque gets directed to the rear axle for a classic BMW rear-wheel-drive experience. Torque gets transferred to the front axle when driving conditions dictate, providing improved balance and performance. 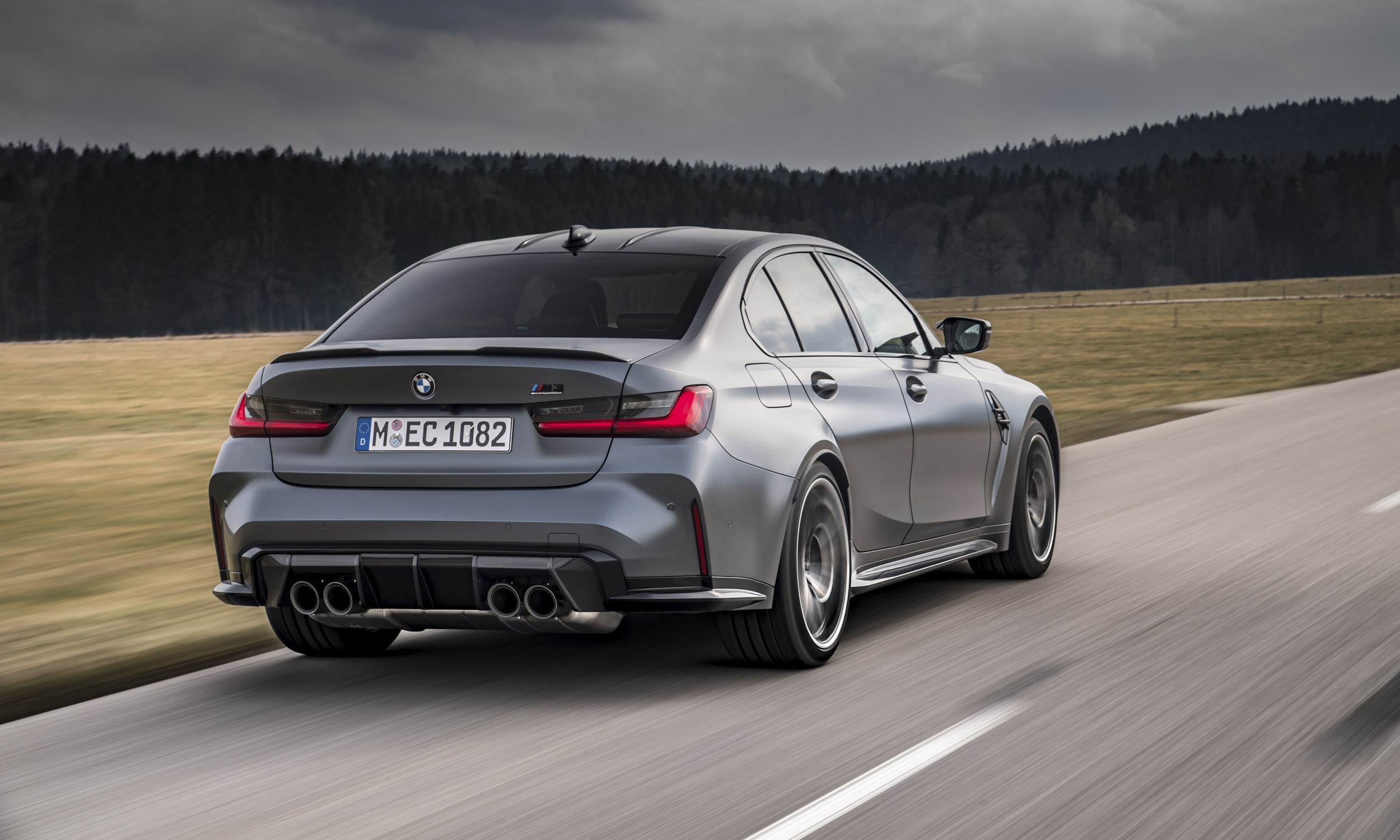 Dynamic Stability Control
Designed for improved performance during high-demand driving situations, the M xDrive and Active M rear differential are both connected directly to the BMW dynamic stability control system for quicker response to control understeer and oversteer. In addition, the transfer case has a unique control unit and integrated traction control, enabling it to react quickly to differences in the speed of the front and rear wheels without the need to use the central DSC computer. 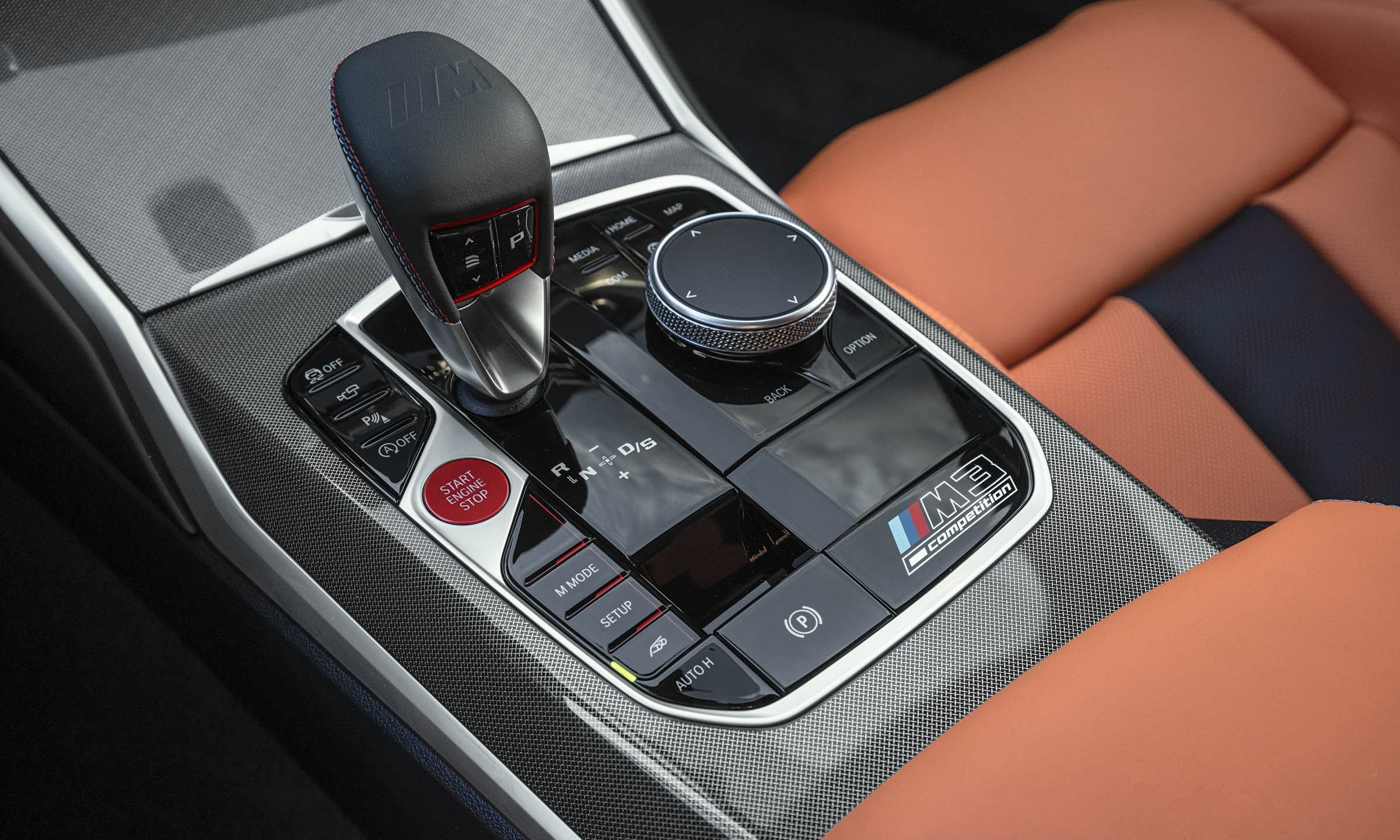 Drive Modes
The automaker offers three drive modes for the 2022 BMW M3 Competition xDrive system: 4WD, 4WD Sport and 2WD. The standard mode is 4WD with rear-biased torque distribution and a focus on traction and precisely controlled handling. In 4WD Sport mode, more torque gets directed to the rear during dynamic driving, with the intention to optimize performance on the track. For experienced drivers only, in 2WD mode the DSC turns off to give drivers an old-school rear-wheel-drive experience without intervention from the DSC. 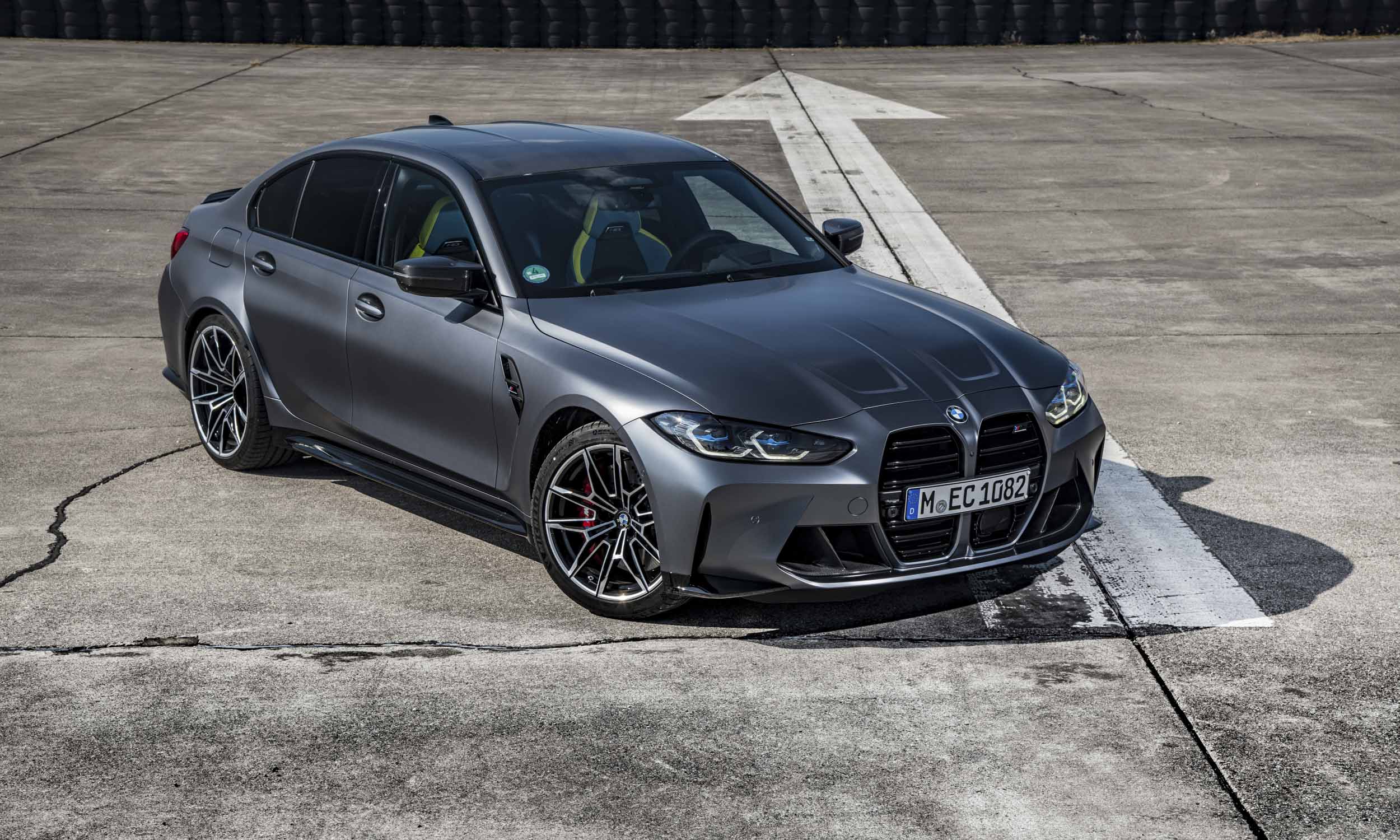 Wheels and Tires
The 2022 BMW M3 Competition xDrive is fitted with forged M light-alloy 19-inch front and 20-inch rear wheels shod with 275/35ZR19 and 285/30ZR20 performance tires. The front axle geometry is redesigned and steering gets retuned to provide the balance and responsiveness expected in a BMW M car. 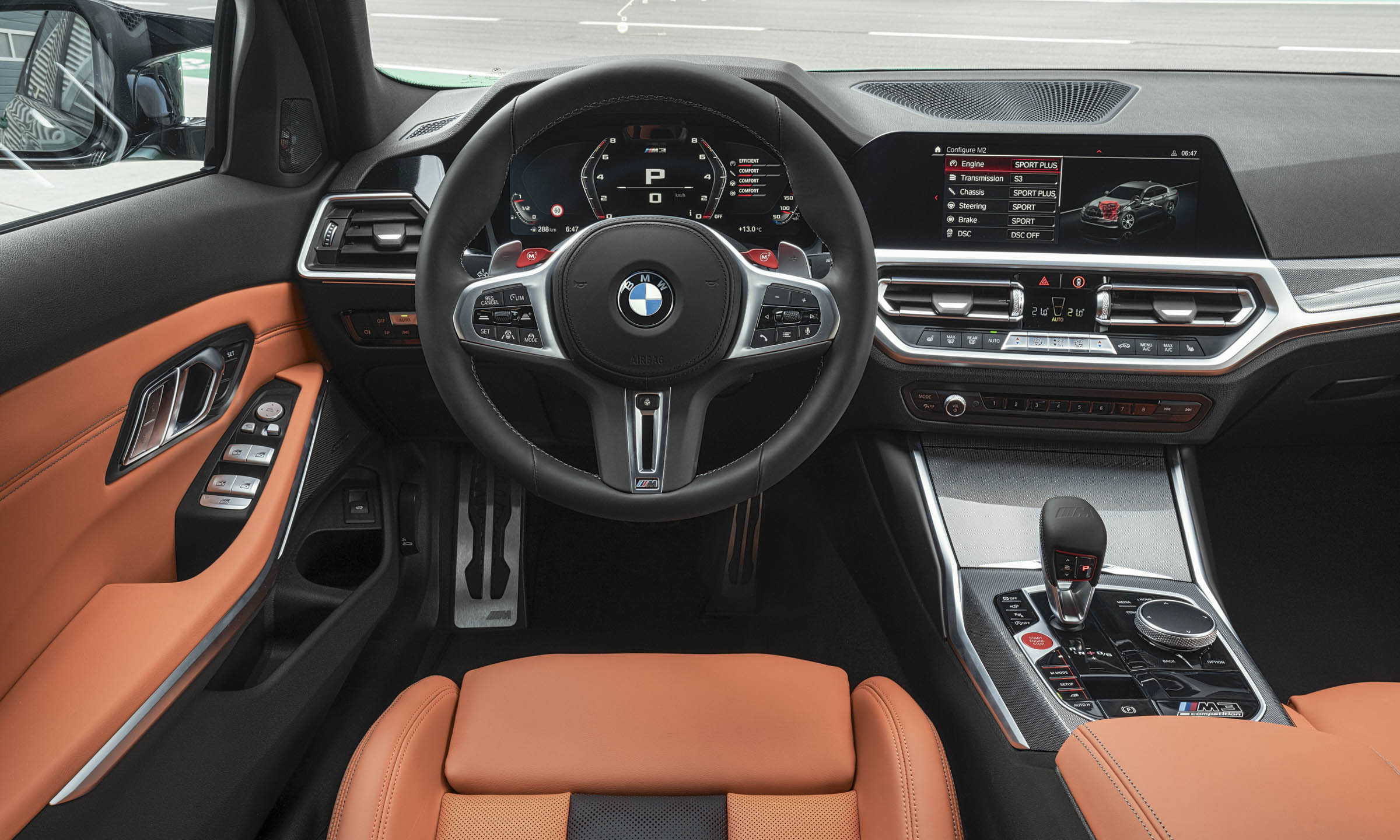 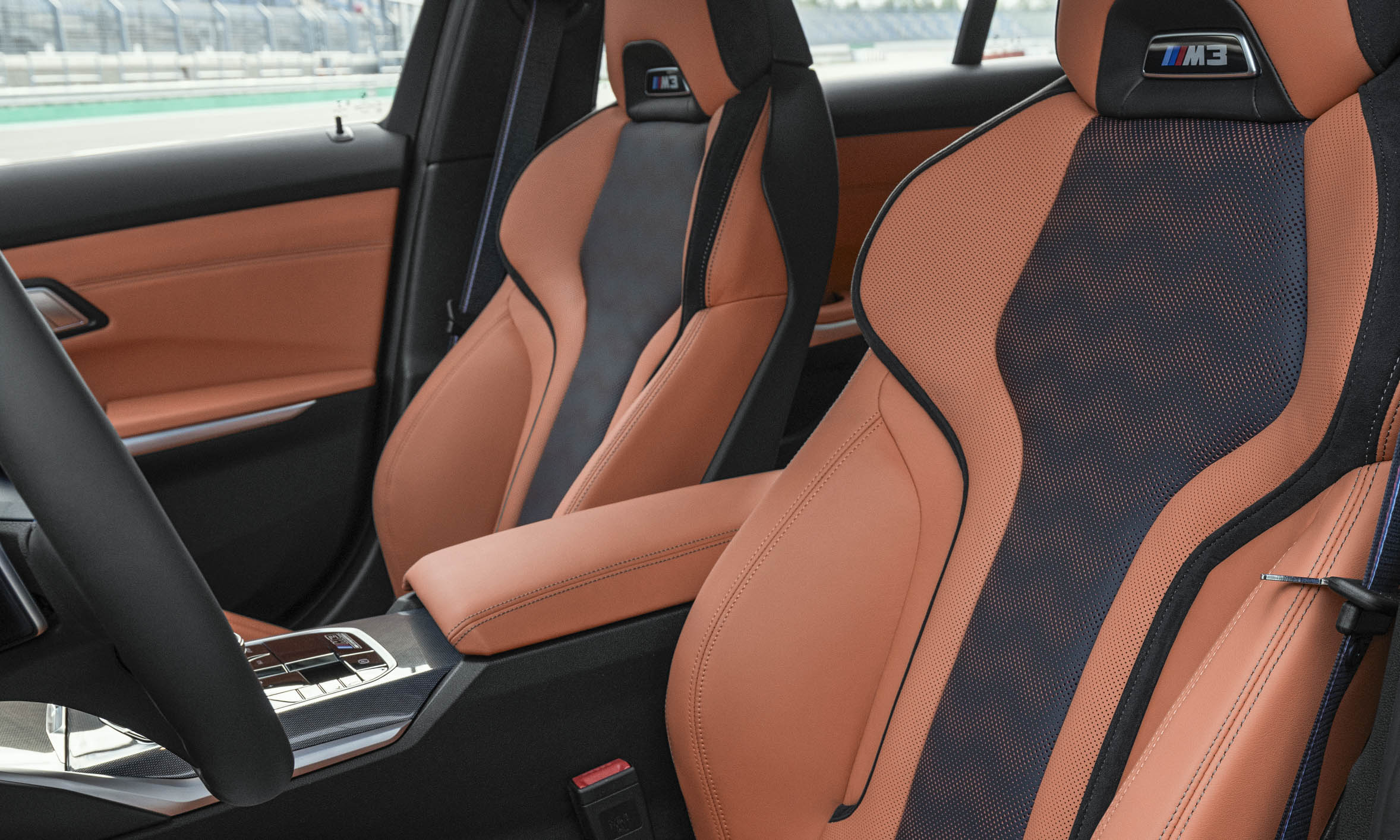 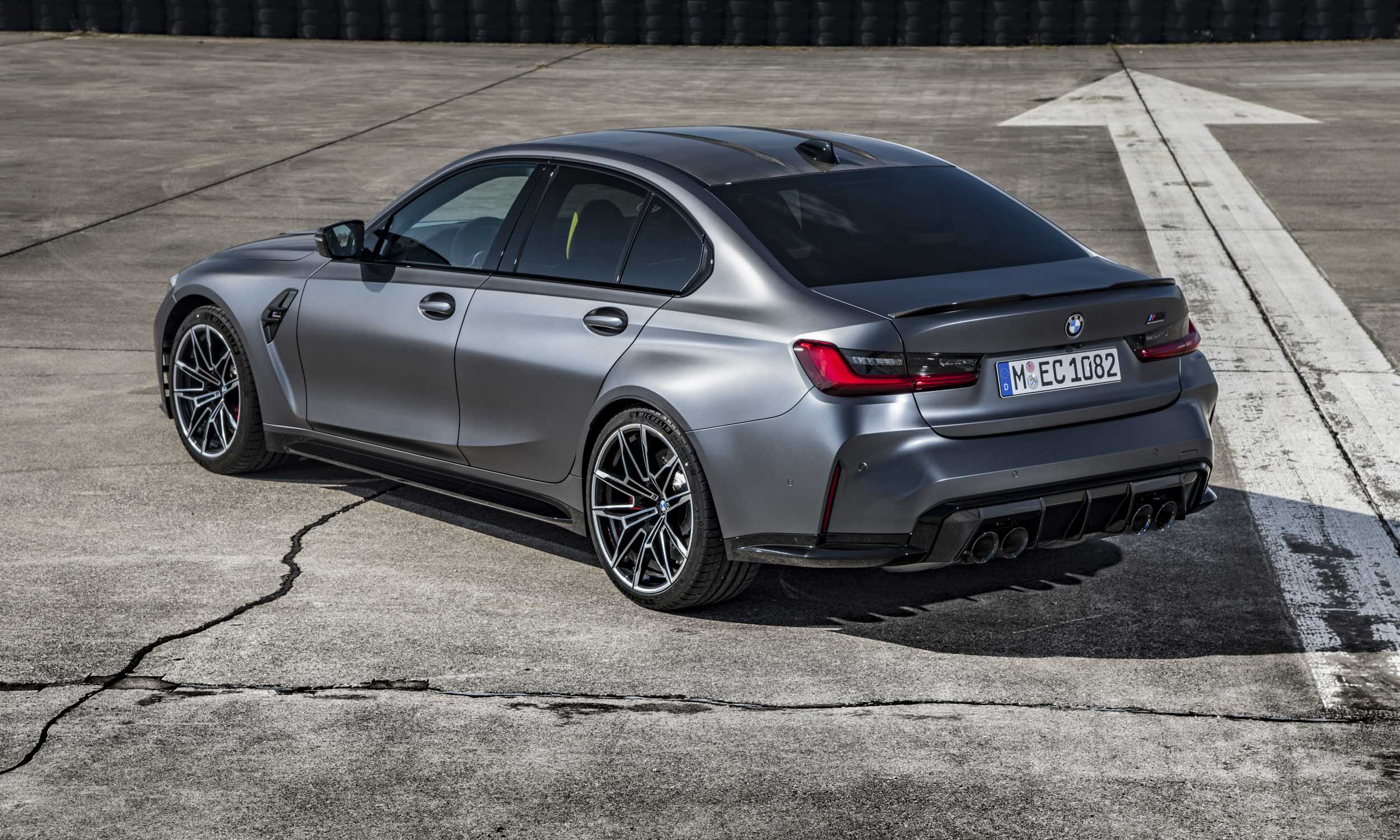 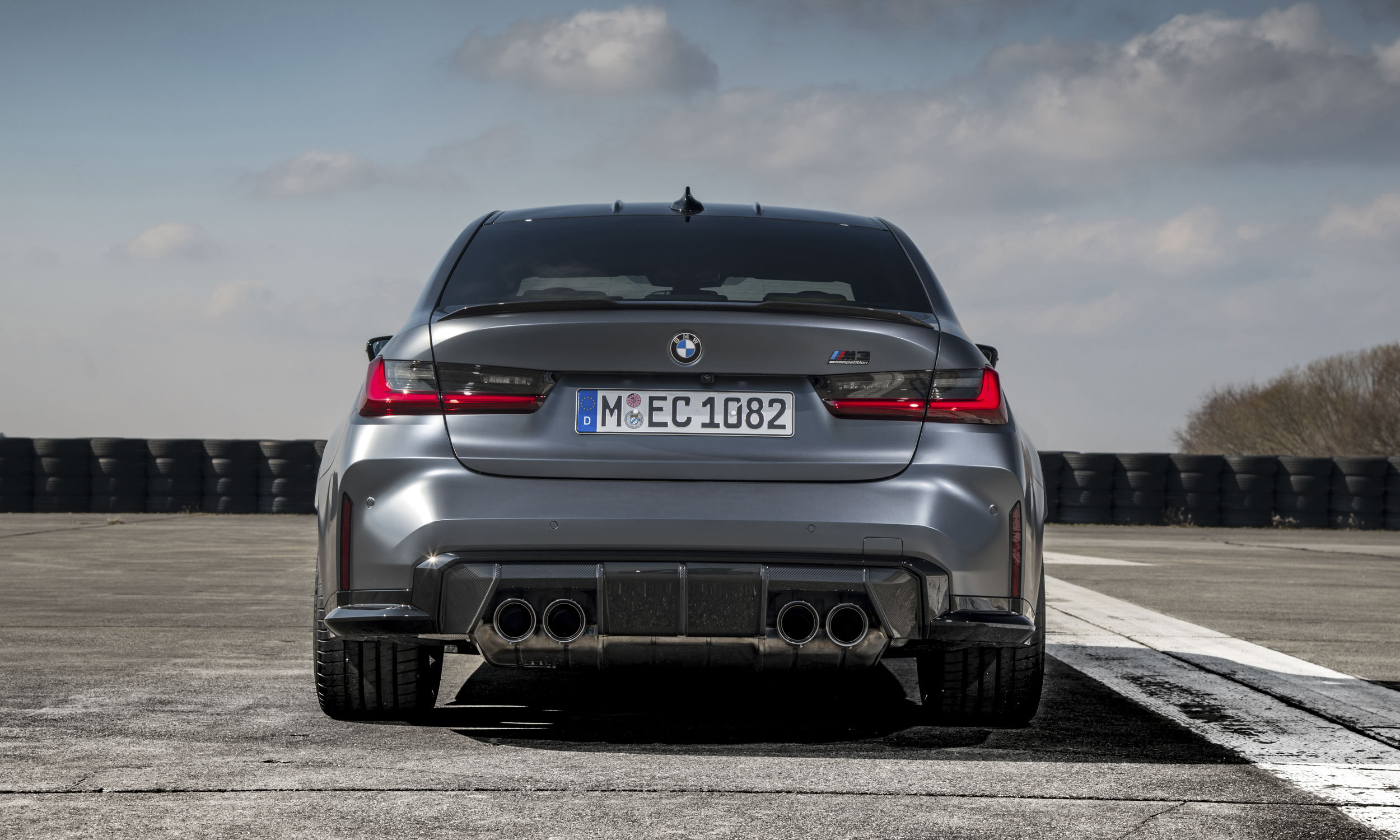 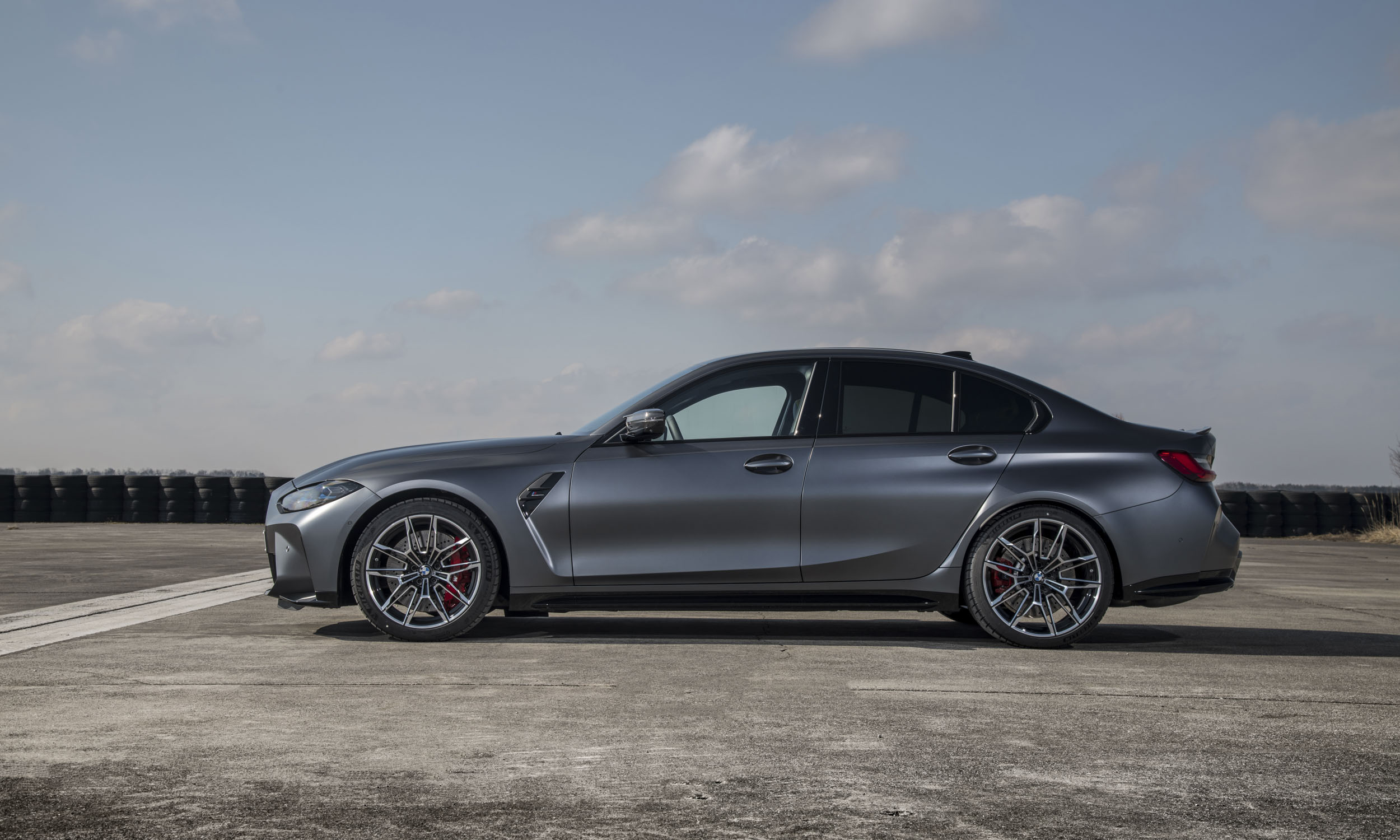 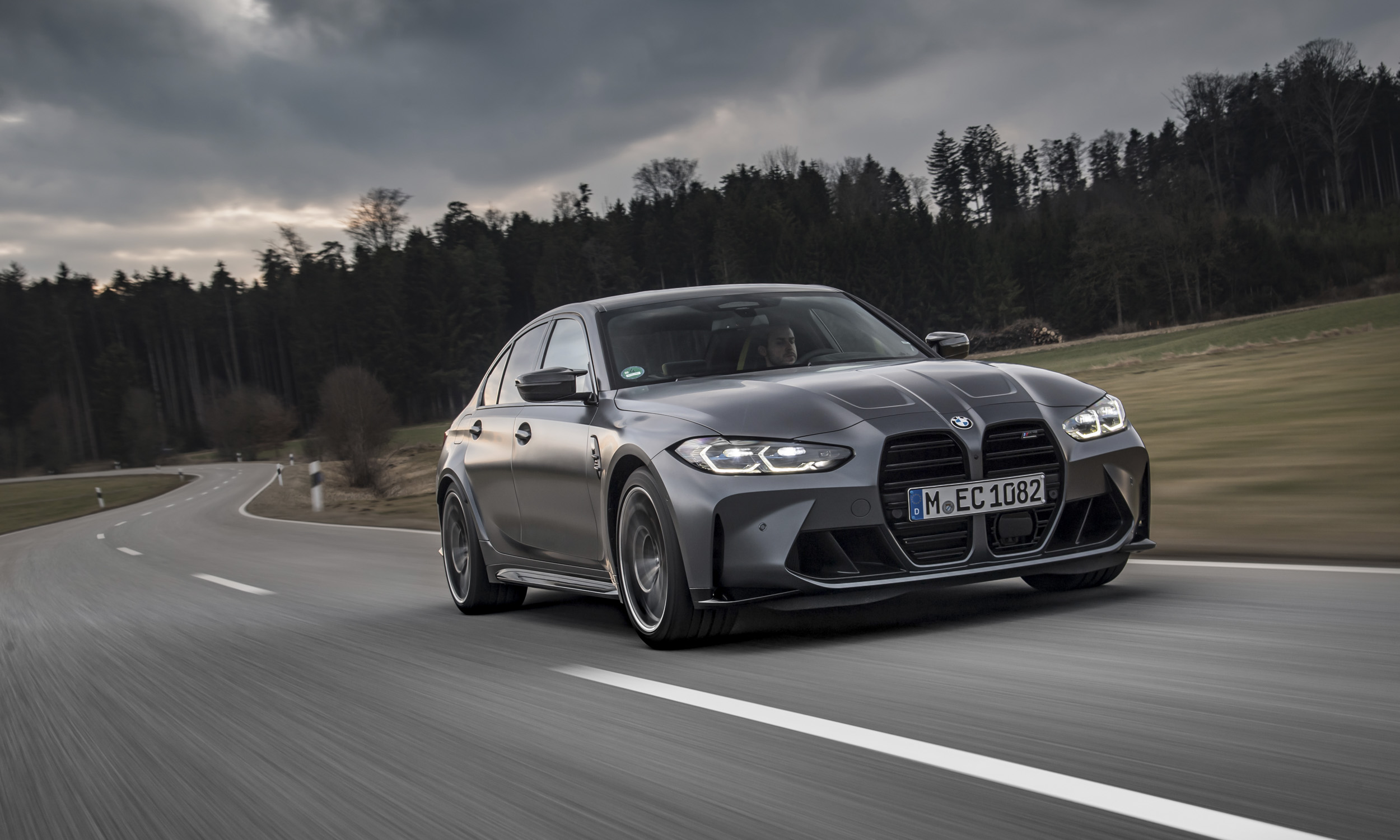 On the Road
The first M3 ever offered with M xDrive all-wheel drive, the 2022 BMW M3 Competition xDrive is stunningly powerful and fast for the street. Drivers will feel the constant need to keep the car reined in on highways, with the slightest squeeze of the throttle urging the car forward even without a downshift. Many enthusiasts have often thought that BMW underestimates the published power output of its performance models, and we would not be surprised to discover that the M3 Competition is producing more than the rated 503 horsepower. Standing-start acceleration feels right in line with BMW’s zero to 60 mph figure of 3.4 seconds. 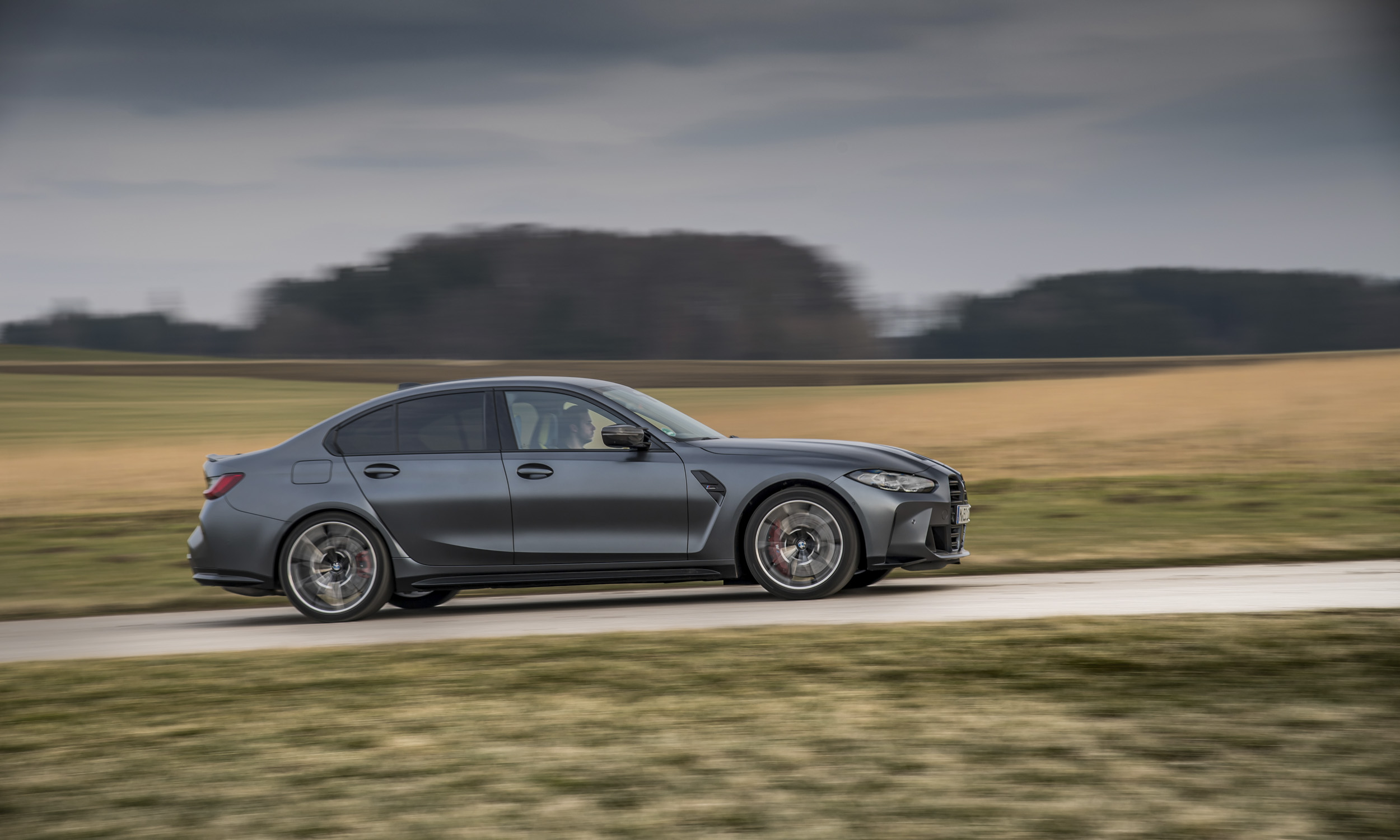 On the Road
As an everyday car, the suspension of the BMW M3 Competition is pretty stiff, but that is a tradeoff for impressive capability on the track, where the M3 Competition sedan transforms into a sports car. Although the car’s ride on the street is very firm, the M3 Competition does a commendable job absorbing imperfections of the road — not too harsh or jarring, but still very direct. If street comfort is a driver’s ultimate goal for owning a BMW, another model would be a better choice. 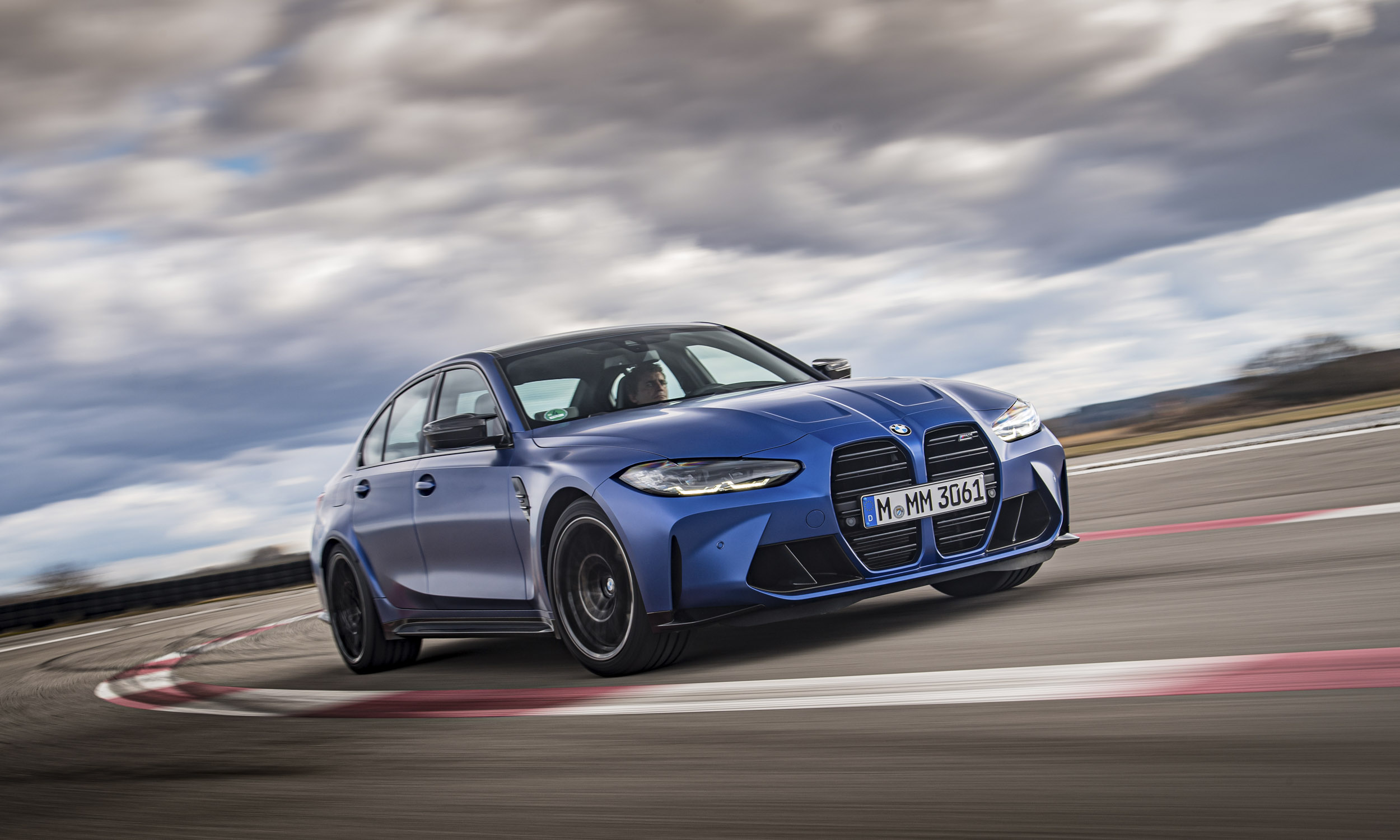 On the Track
The South Palm Circuit at The Thermal Club provides a near-perfect opportunity to experience the true potential of the 2022 BMW M3 Competition xDrive. The circuit includes three long straights and smooth, hard braking zones. With a BMW driving instructor in the lead car and coaching for the proper driving line, braking point, turn-in, apex and exit, we were able to concentrate on the tremendous performance of the car. 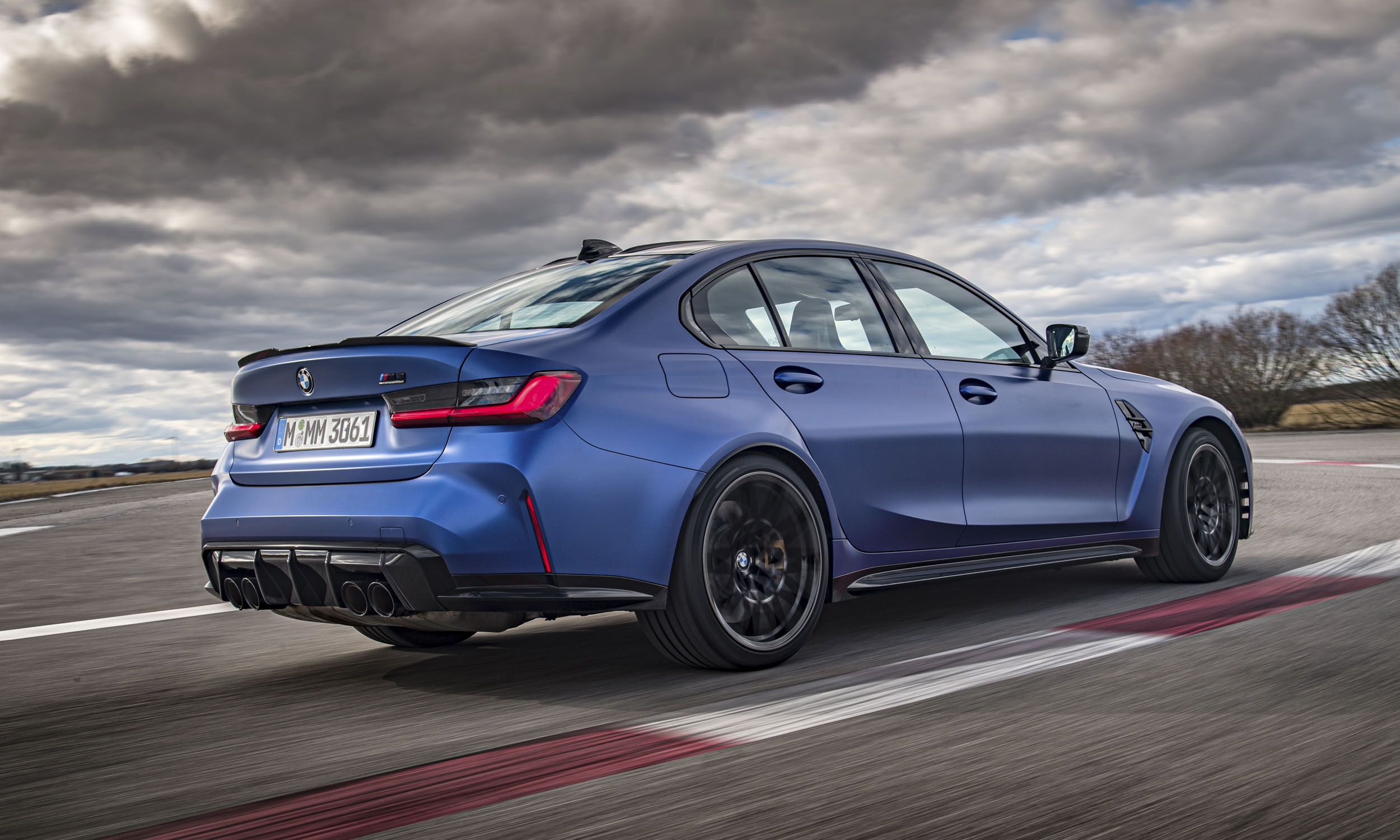 Refined M xDrive
With powerful acceleration and equally powerful brakes, the M3 Competition is incredibly fast with lightning-quick shifts and remarkable braking for a street car. BMW has previously refined M xDrive on other performance models, so this solid system contributes much to the balance and performance of the M3 Competition xDrive. The steering remains direct and precise, even though there is not much actual feedback; the car turns in easily at corner entrance and rotates well for pinpoint driver control. 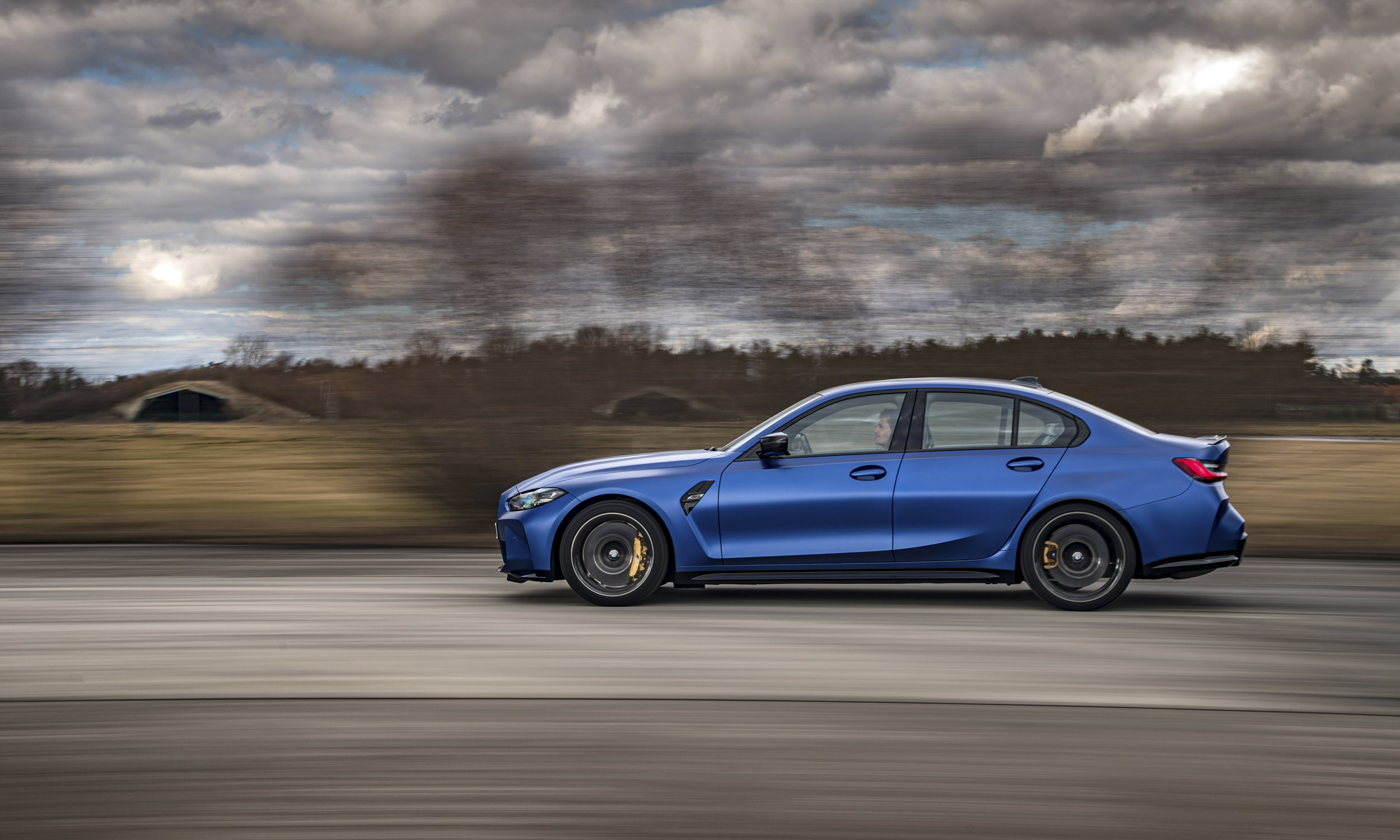 Confidence Via Torque Distribution
Thanks to the rear-drive bias of the M xDrive system, the M3 Competition feels balanced through corners, even as some power gets directed to the front wheels. The torque distribution gives drivers the ability to power confidently through corners while minimizes the tendency to understeer as power gets applied. At all times the M3 Competition xDrive feels like a rear-wheel-drive car, allowing the rear end to step out a bit under acceleration while exiting a corner. 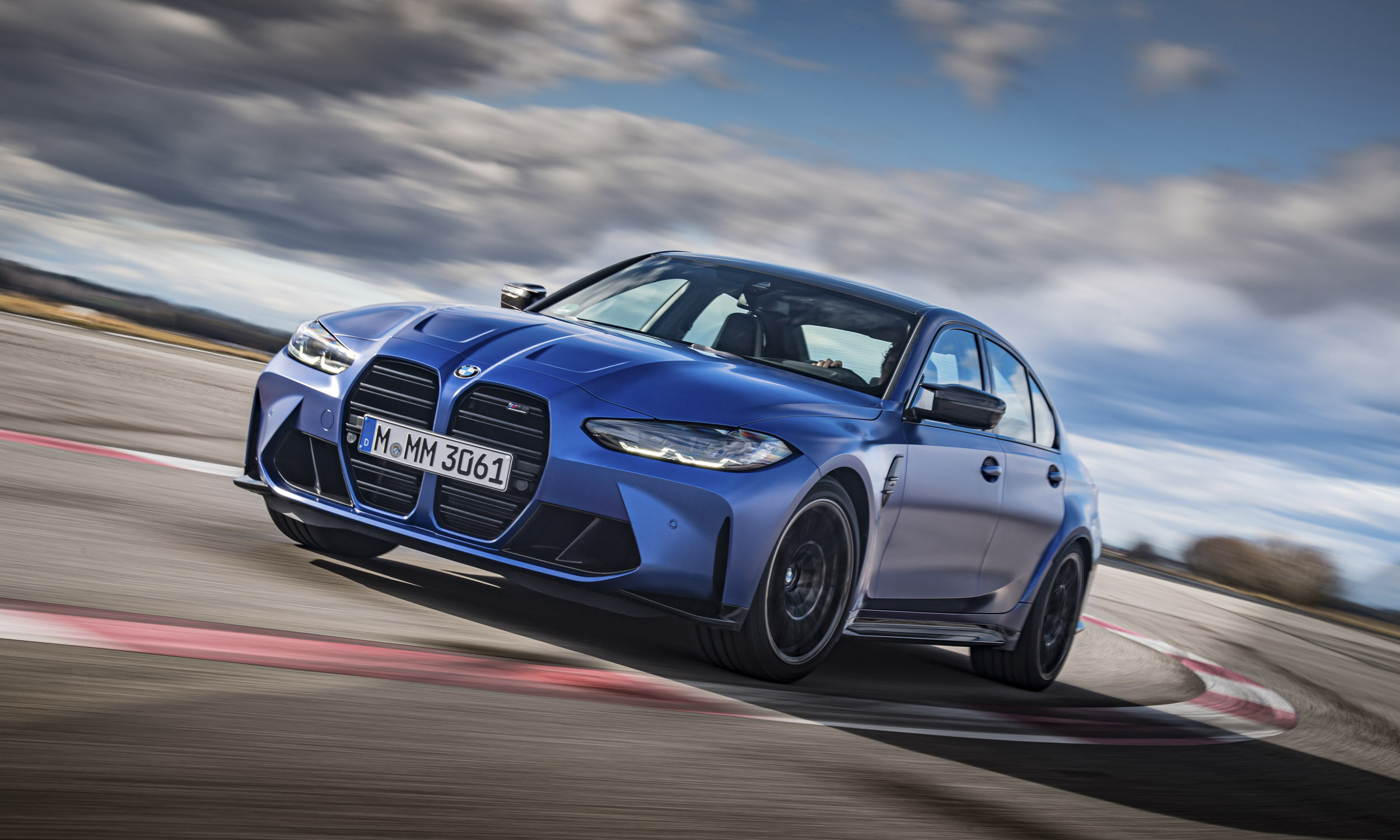 On Track With Professionals
To experience the full potential of the 2022 BMW M3 Competition xDrive, we took a ride with BMW Motorsport driver Connor De Phillippi, who recently completed the 2021 IMSA WeatherTech season driving the BMW M8 GTE for Rahal Letterman Lanigan in the GTLM class. During the press event, the BMW instructors coached attending drivers to find the safest lines around the track, with conservative braking zones and late apexes. But to demonstrate the true potential of the M3 Competition xDrive, De Phillippi piloted the M3 at an advanced level, attacking corners more aggressively and illuminating the true capabilities of this incredible car. 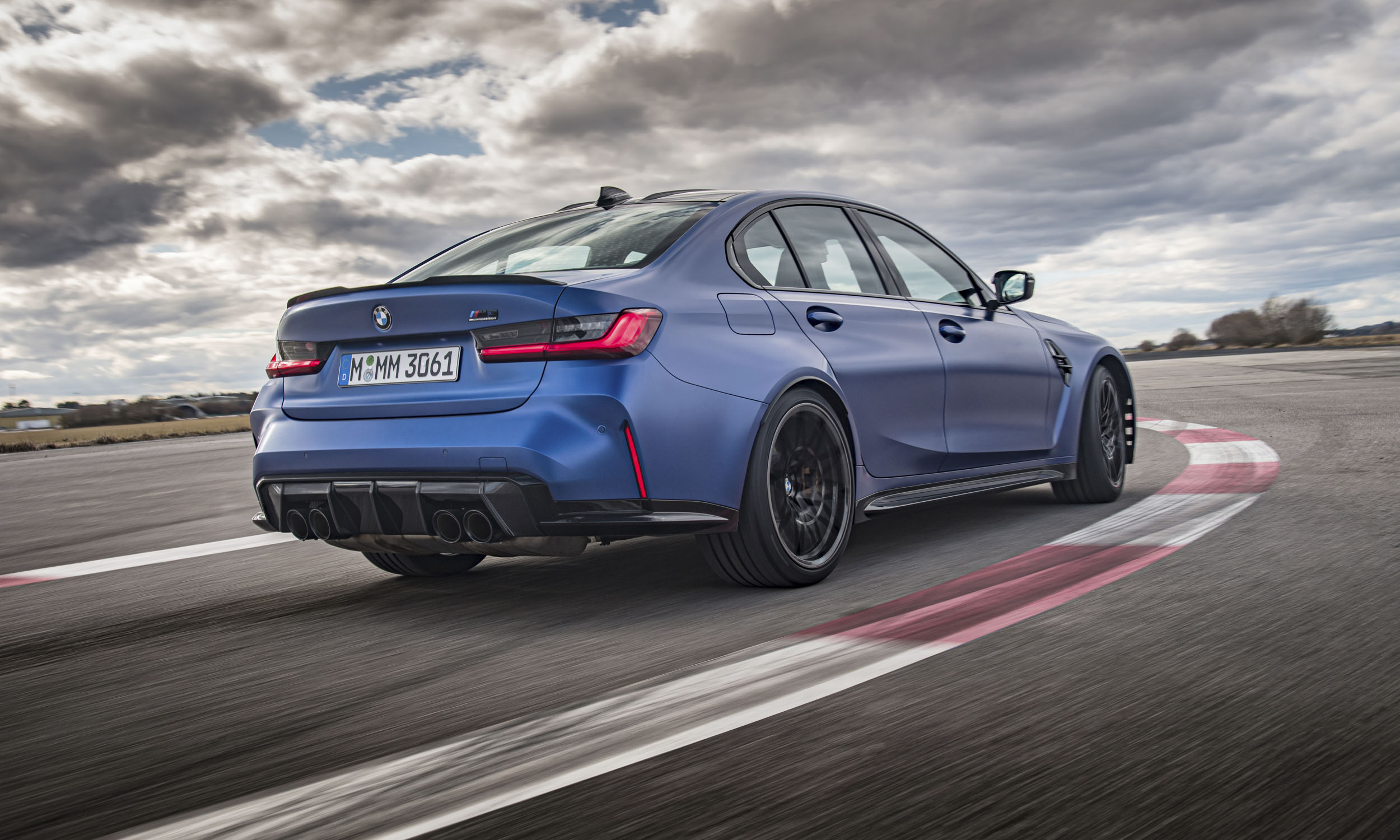 The Racer’s Edge
During the demo laps, BMW racer De Phillippi would trail brake the M3 Competition xDrive until the exact turn-in point of the corner, enter the corner and then pause slightly to let the car rotate before picking up the throttle and accelerating through the corner with the car’s tail stepping out. Even when performing right at the edge of the M3 Competition xDrive’s capability, the car always felt rear-biased and had no understeer thanks to precise power being transmitted to the front wheels as well as the rears. During the flying laps, a bigger, more powerful BMW M5 CS appeared a few hundred yards ahead of us on track; Connor proceeded to hunt the car down and close the gap in less than two laps. Braking hard into one of the slower corners, De Phillippi forced the other pro driver to enter the corner a bit too fast and as the M5 CS pushed wide through the corner, Connor tucked to the right and made the inside pass — a thrilling opportunity to see the full potential of the M3 Competition xDrive in the hands of a professional race driver. 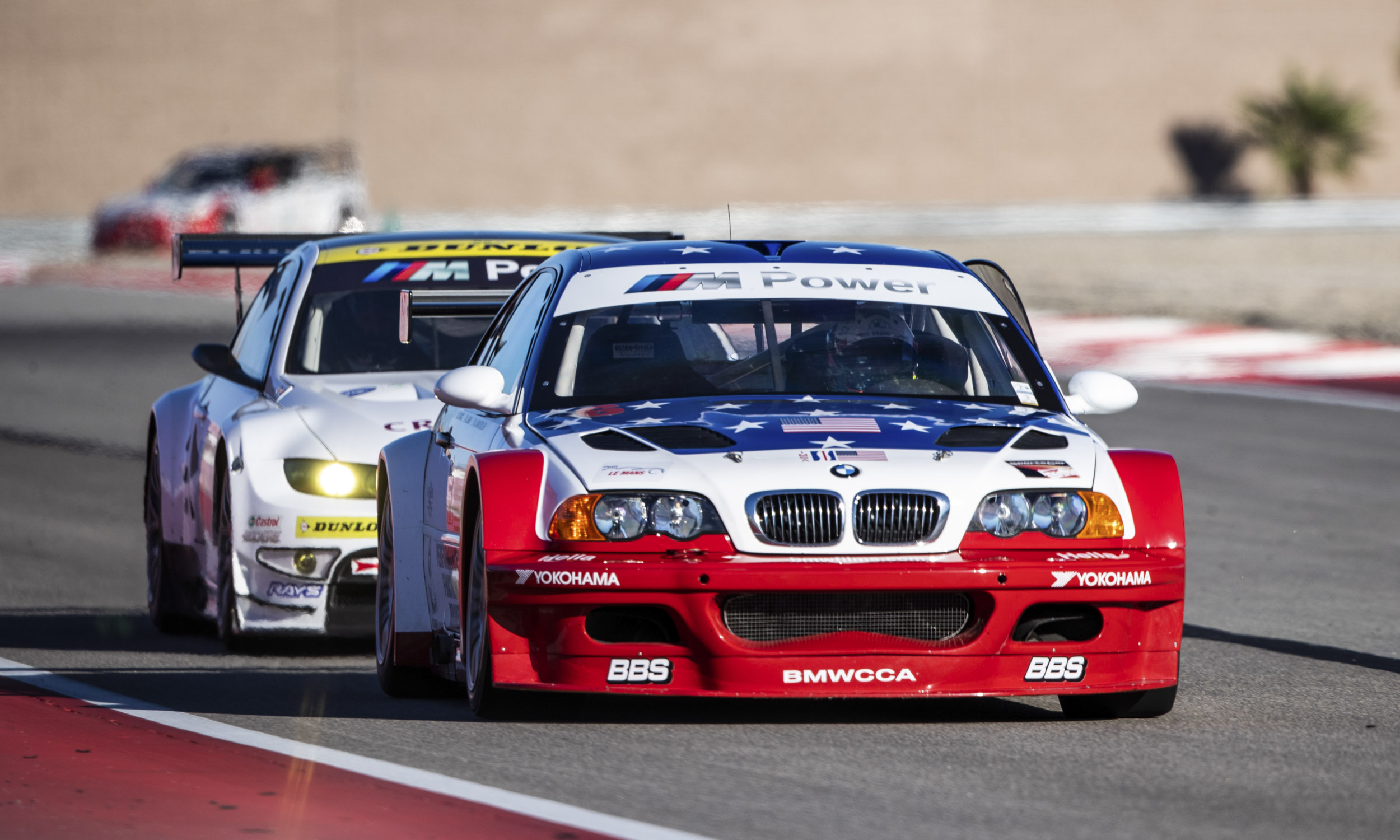 M3 GTR
To top the day off, BMW gave us the opportunity to ride with De Phillippi once again — this time in the championship-winning BMW E46 M3 GTR race car. Raw, brutal and fast, the M3 GTR is the first M3 ever to use a V8 engine, and it was a privilege to experience this significant winner in the recent history of BMW Motorsport.

Right for You?
The M3 Competition xDrive is a powerful sports car in a sedan body. Our only real complaint would be that the car’s sophisticated systems have made it so expensive, with our test car coming in at more than $95,000 with options. The car’s capability is tremendous, and even though the setup could be considered a little stiff for everyday use, that is a reasonable tradeoff for a machine that performs so well on track. Sedan practicality with sports car capability — for drivers who seek that winning combination, the BMW M3 Competition xDrive should be near the top of their lists. 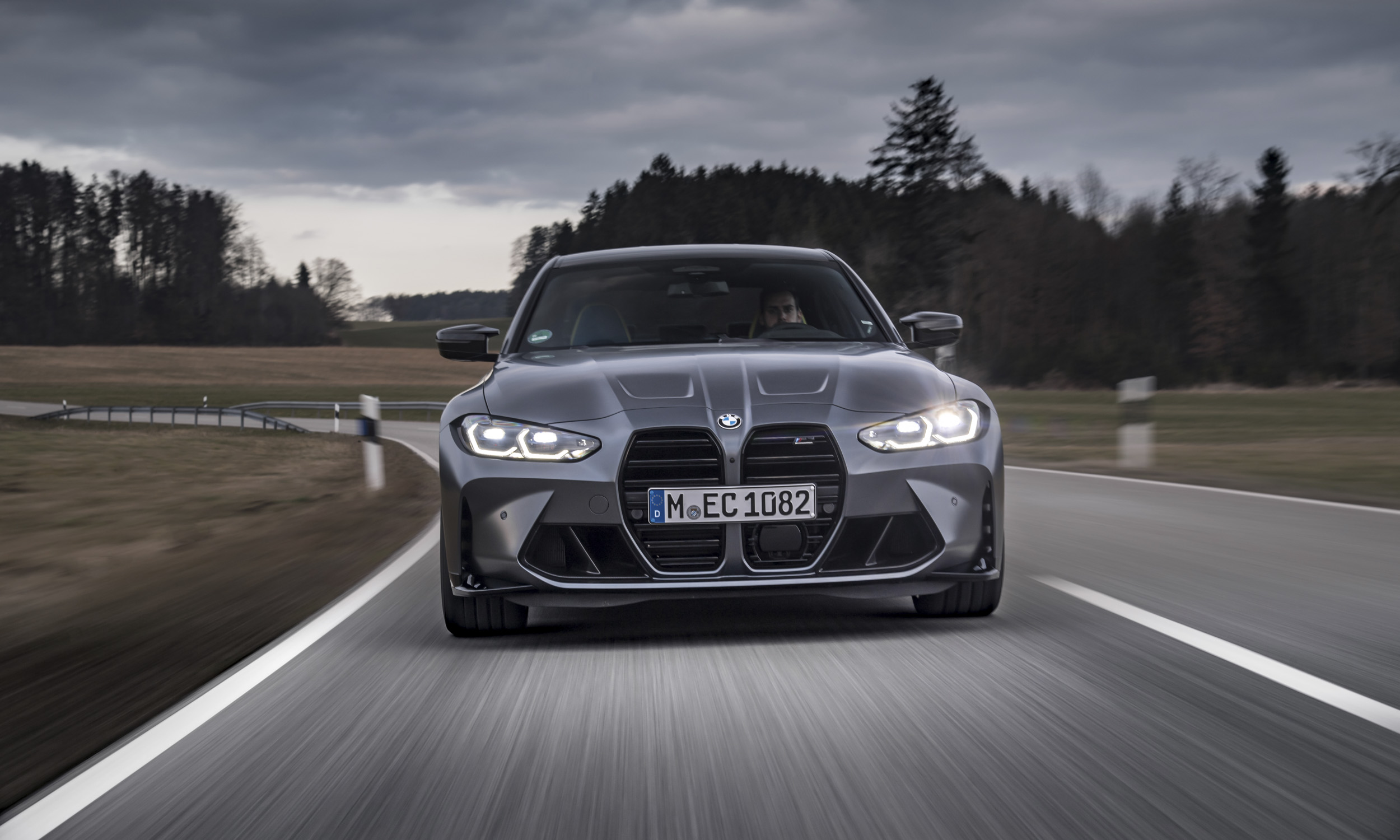 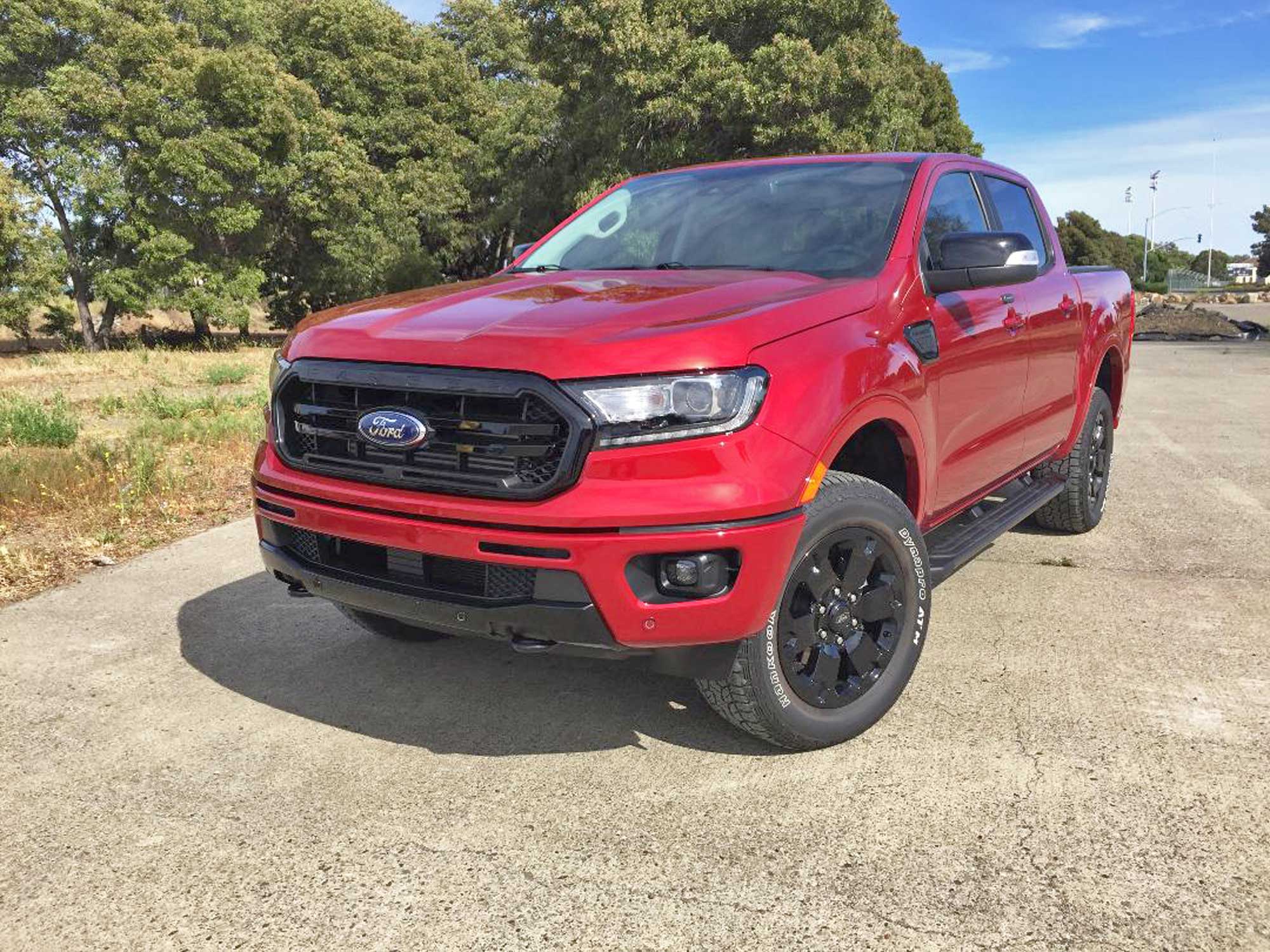 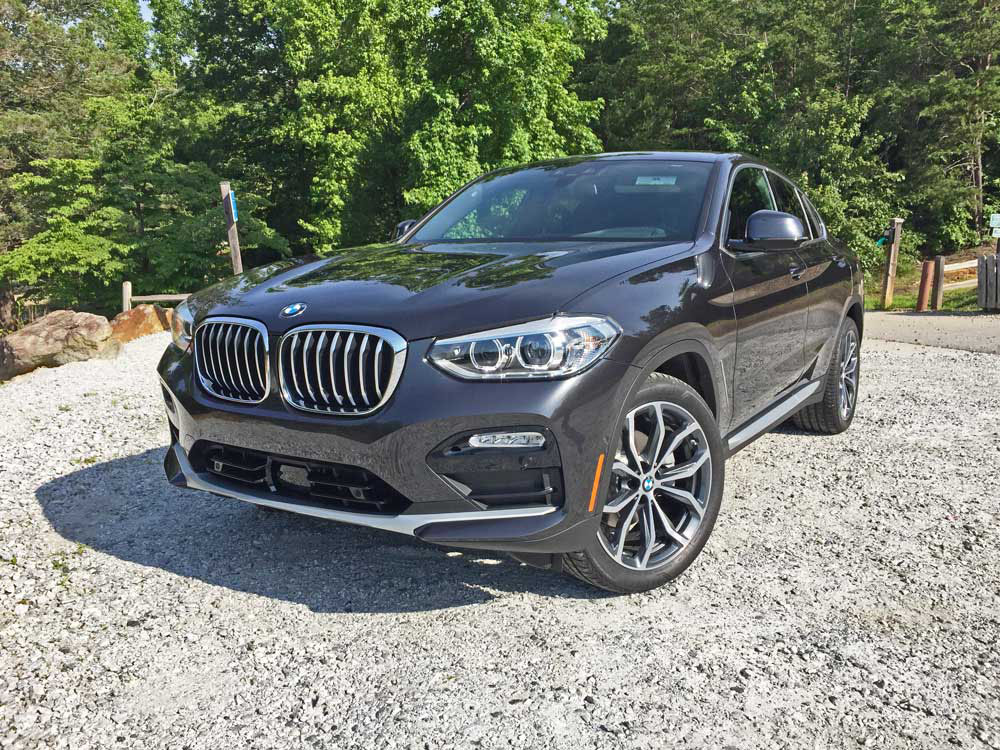