For as long as I can remember, my father has been enamored with Rolls-Royce Motor Cars. Throughout his life, a Rolls-Royce has been the benchmark against which all other vehicles are judged — the epitome of luxury. My fervent father possesses numerous books about these legendary automobiles, always points out a Rolls-Royce if we’re lucky enough to spot one in the wild around our hometown of Gary, Indiana, but in almost 90 years he never had the opportunity to ride in one. Upon hearing about my father’s penchant for these fine motor vehicles, the folks at Rolls-Royce were kind enough to provide the latest model from Goodwood — the all-new 2021 Rolls-Royce Ghost — to test drive, surprise my dad and fulfill a lifelong dream. 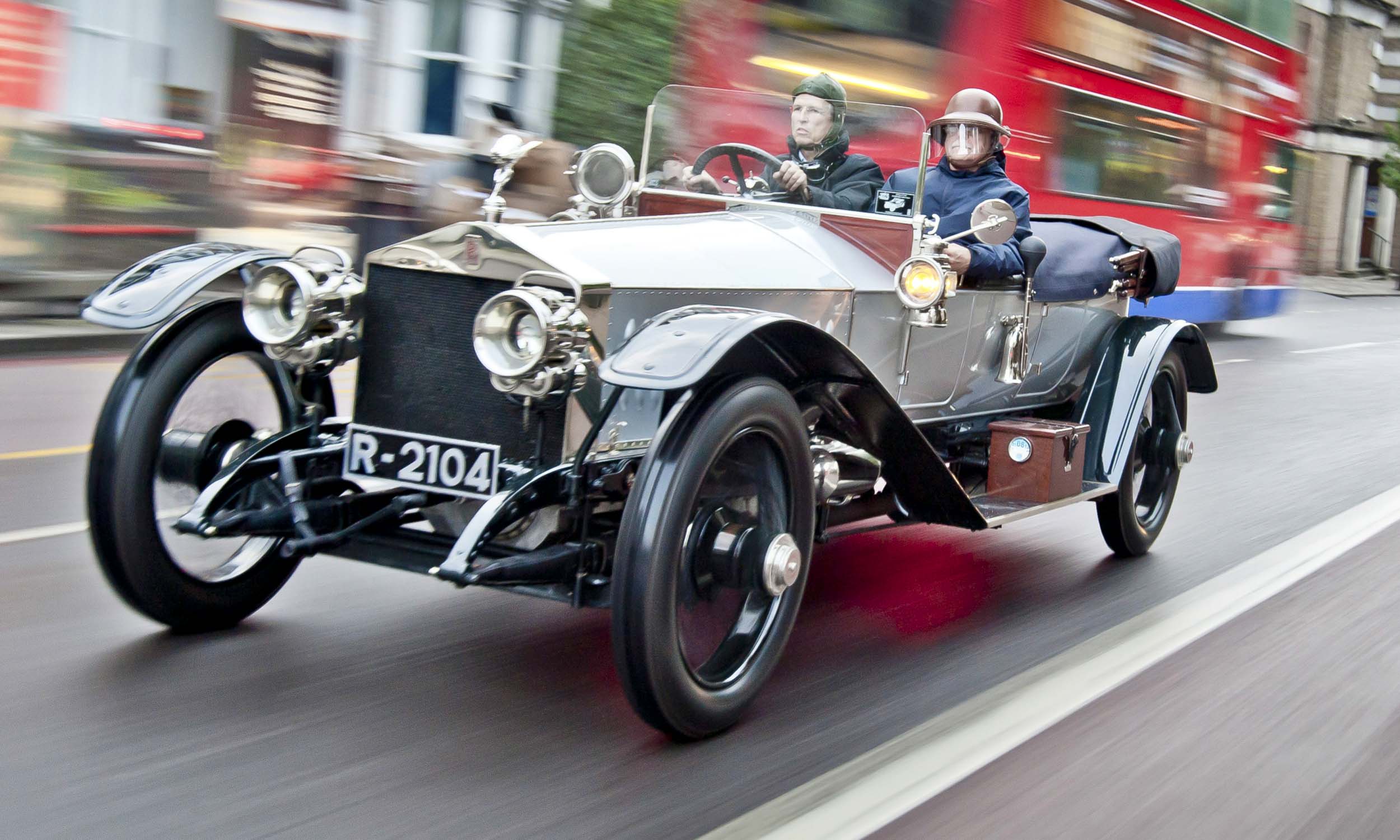 As an engineer, my father appreciates more than simply the opulence of a Rolls-Royce. The company has been building advanced automobiles for more than 100 years — in fact, one of the first models could be considered the predecessor to the current Ghost: the Silver Ghost. Introduced in late 1906 during an era when the company built one model line at a time, the Silver Ghost was the only Rolls-Royce produced until 1925. Quite advanced compared to other models, the Silver Ghost features pressurized engine lubrication, dual ignition and advanced carburation that provides smooth power delivery as well as noteworthy reliability for its time. 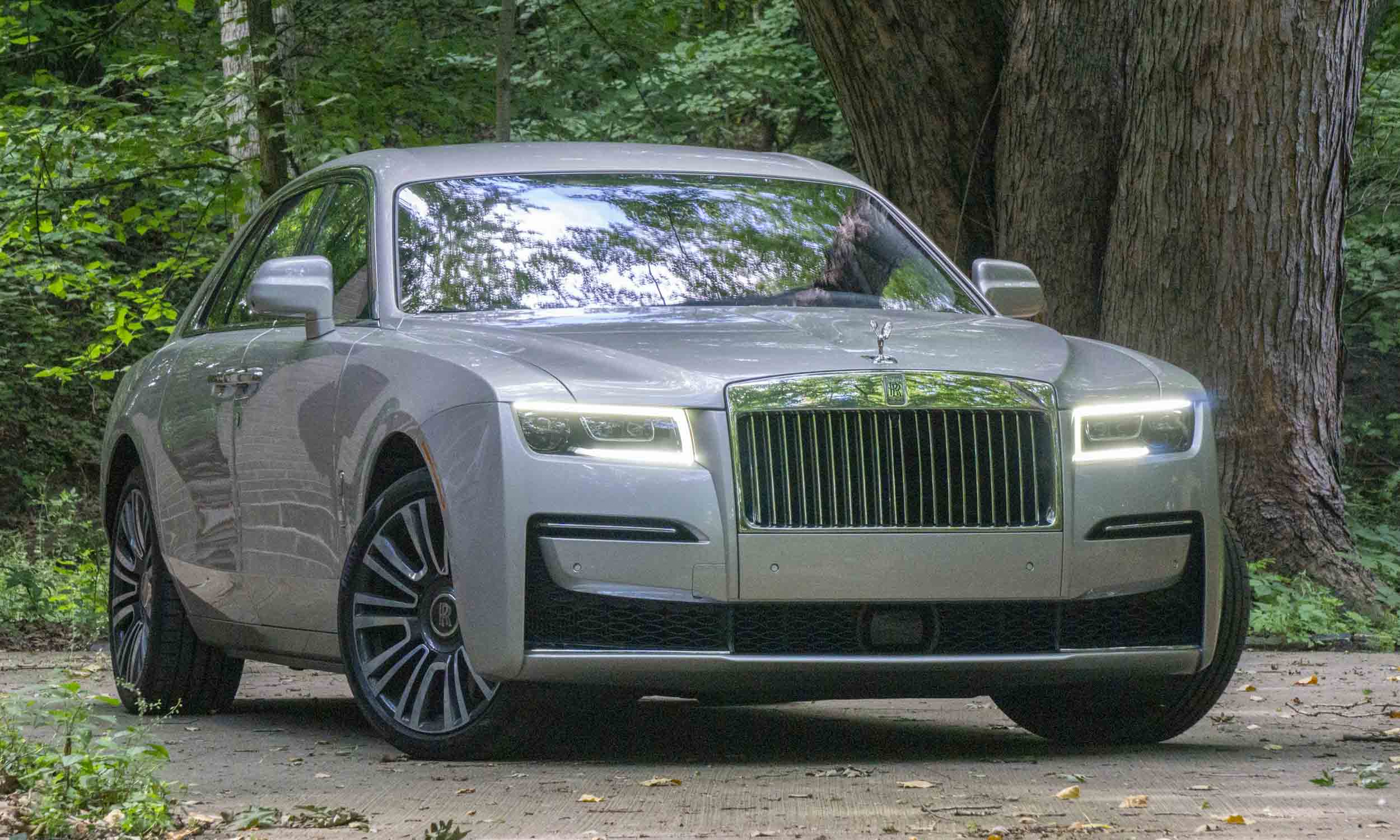 Considerable progress has been made in the century since the Silver Ghost, and this contemporary Ghost offers the latest technology along with supreme luxury. Unbeknownst to my dad, the vehicle I drove home to Gary was a 2021 Rolls-Royce Ghost painted in Premiere Silver. And even though every Ghost comes with a long list of standard features, the test vehicle had an equally long list of optional extras including the lighted Spirit of Ecstasy grille ornament, chrome-plated exhaust outlets, Rolls-Royce bespoke audio, rear-seat picnic tables, ventilated rear seats, immersive rear seating with a center console, custom umbrellas and the Technical Bespoke Clock. Total MSRP for this Ghost lists at $460,350. 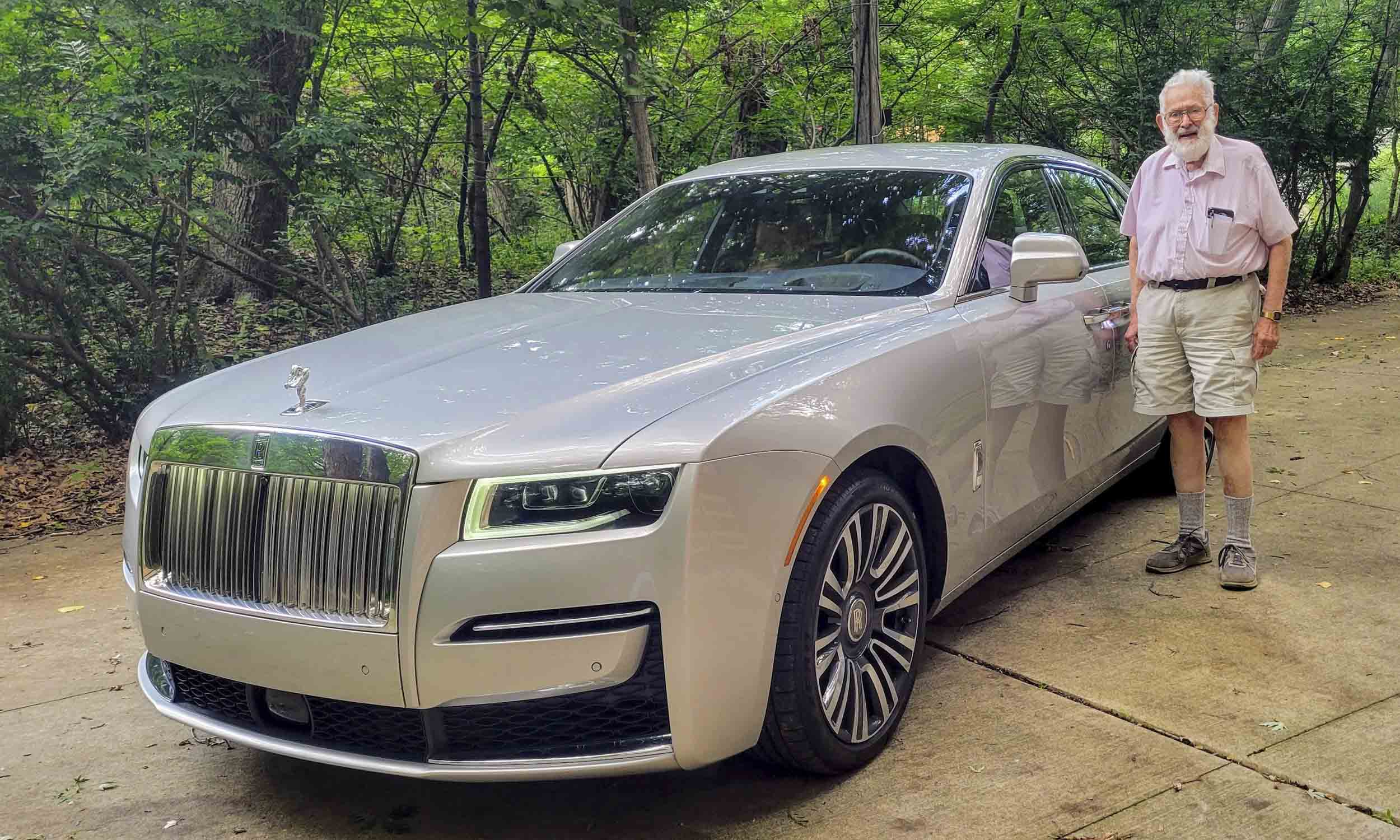 Since I had not previously mentioned anything to my father (or mother) about returning home in a Rolls-Royce Ghost, as soon as he walked out the door his jaw dropped — he knew exactly what it was. Granted, the iconic bold grille topped by the elegant Spirit of Ecstasy ornament is an easy giveaway, as is the RR logo in the center of each wheel — floating in place so they are always upright. To say that my father was pleasantly shocked by the arrival of his son in a Rolls-Royce Ghost would be an understatement. 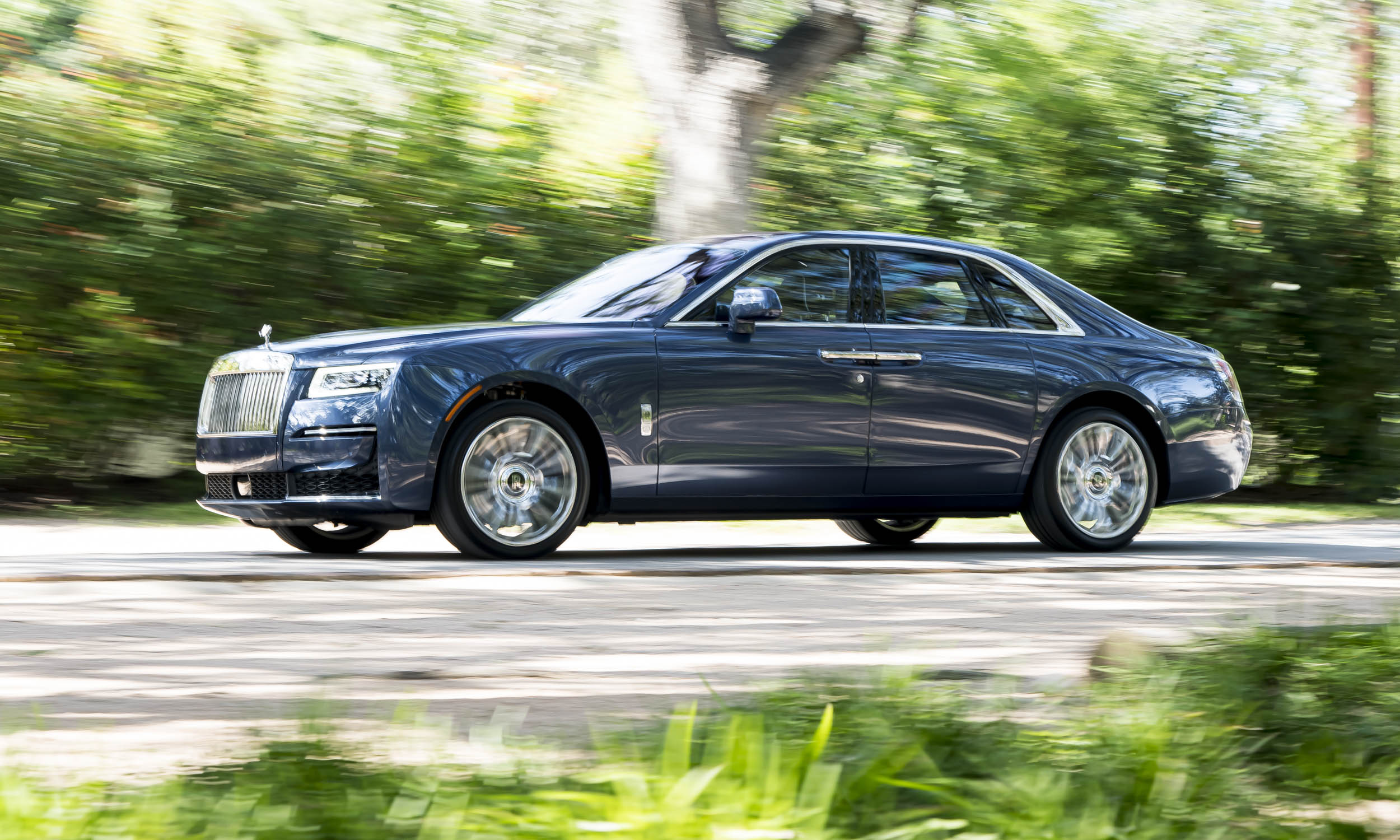 In profile, a single line emphasizes the length of the 2021 Rolls-Royce Ghost — a lower line borrowed from boat design that uses reflection to lighten the surface and create a sense of motion. The roof has a subtle arch, and the window openings for the front and rear doors are nearly equal. At the rear, the flanks taper into nearly square taillights — a hallmark of recent Rolls-Royce design. 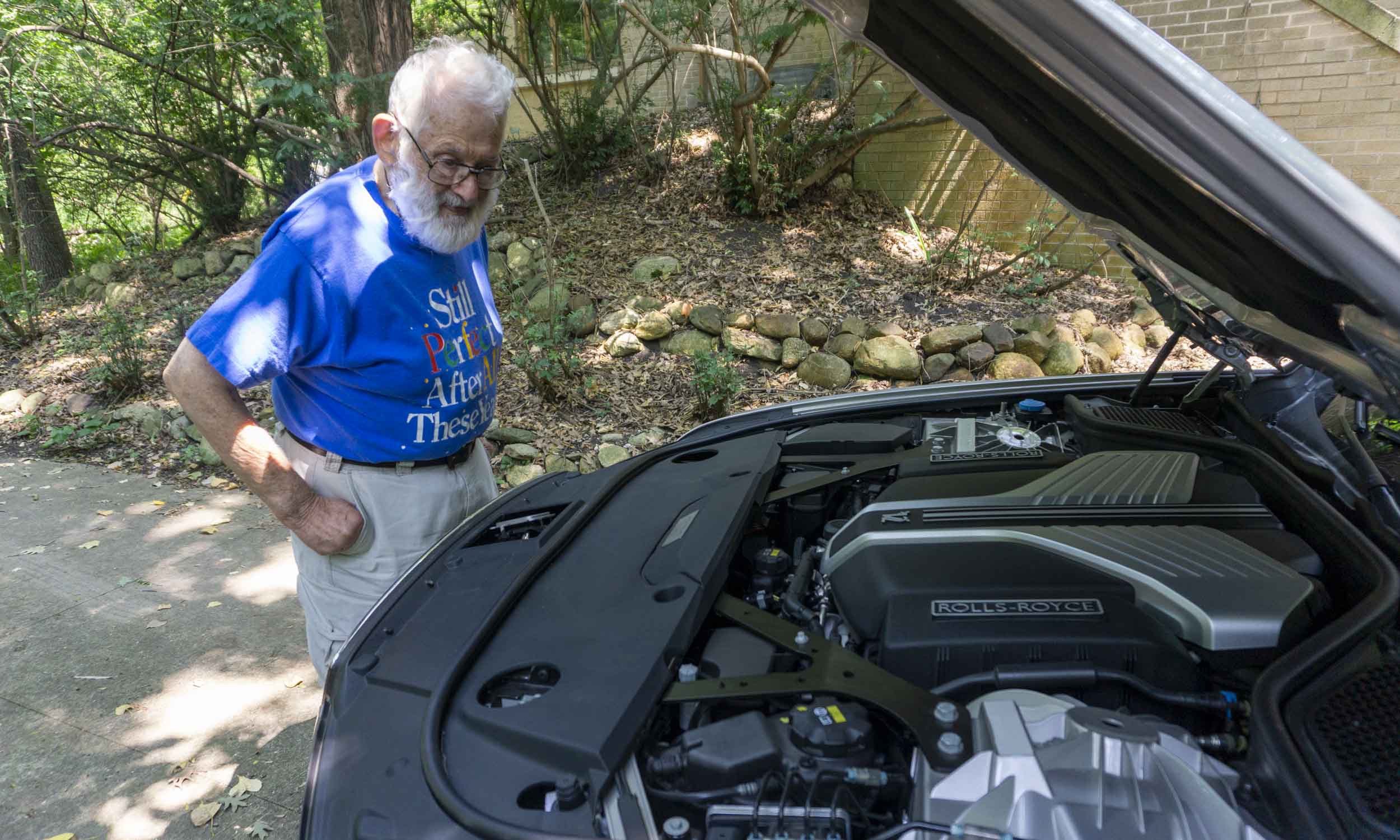 In the late 1960s, Rolls-Royce introduced the 6.75-liter V8 engine, often referred to as the Six and Three-Quarter — this engine was in production longer than practically any other engine, and it has been used in a range of Rolls-Royce and Bentley models. Throughout the engine’s illustrious career, power has always been described as “adequate.” In keeping with tradition, Rolls-Royce once again employs a 6.75-liter engine for the new Ghost; however, the V8 has been replaced with a twin-turbo V12 producing 563 horsepower and 627 lb-ft of torque — considerably more oomph than adequate. 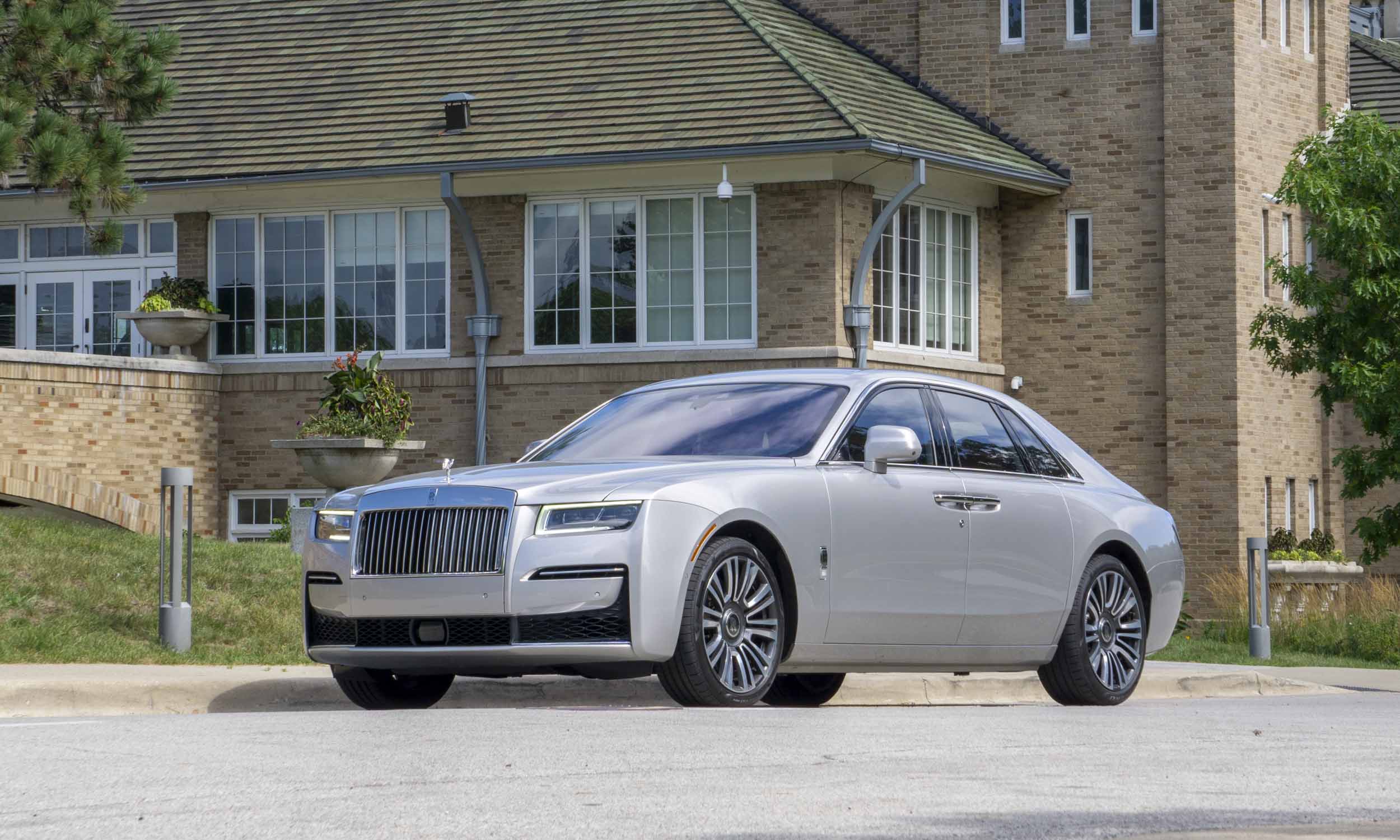 The 2021 Rolls-Royce Ghost sends power from the big V12 to all four wheels through a satellite-aided transmission that uses satellite data to shift to the correct gear for upcoming corners or terrain. The Planar software controls the all-wheel drive, the all-wheel steering, the stability control and a self-drying brake system to ensure that Ghost is adapting to all changes in surface and grip level. The result is an smooth-shifting gearbox in concert with an incredibly quiet engine. 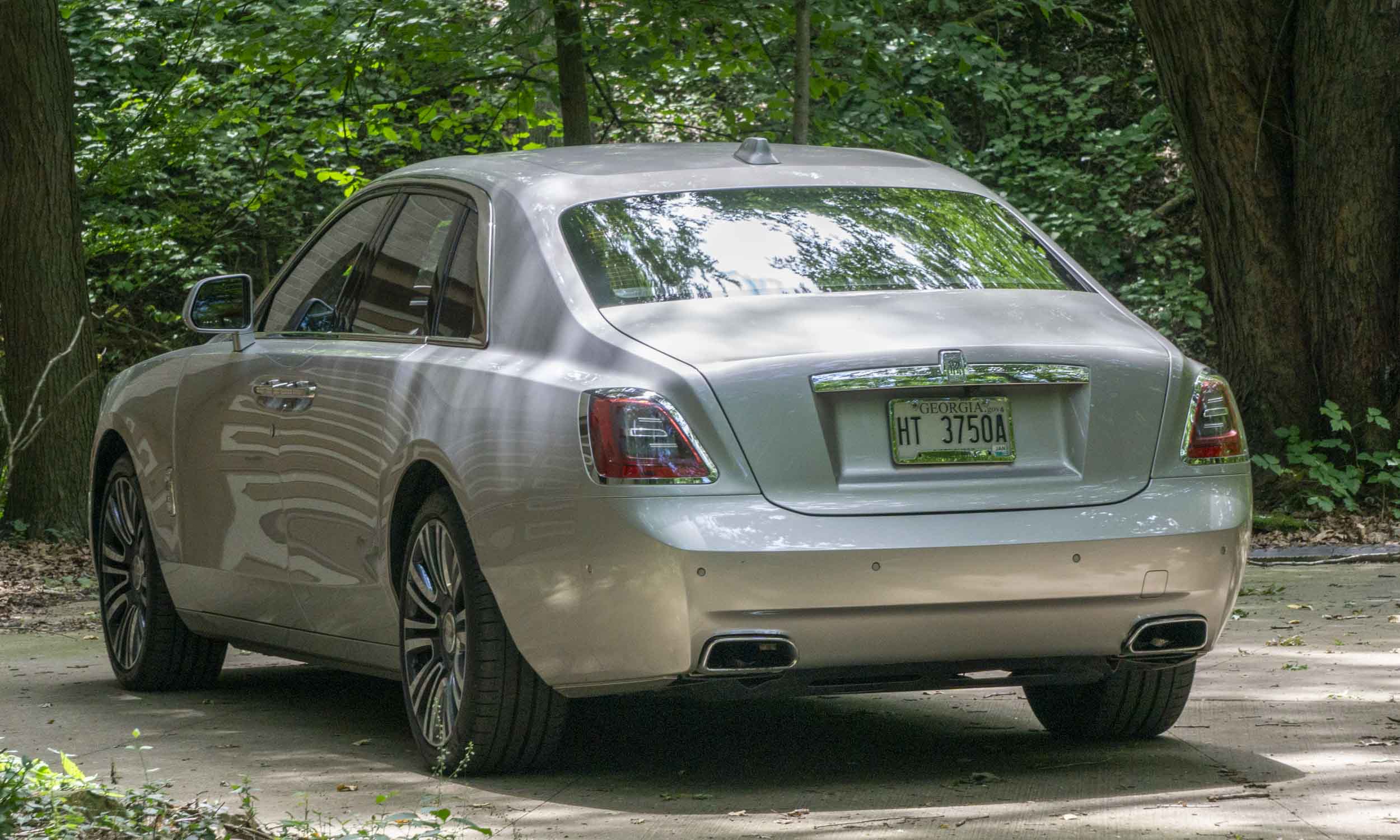 To deliver the signature Rolls-Royce “Magic Carpet Ride,” the Ghost’s redesigned suspension — called the Planar Suspension System — features a world-first Upper Wishbone Damper Unit for the front suspension, developed to further improve the continuously variable, electronically controlled shock absorbers. The self-leveling, high-volume air strut assemblies combine with what Rolls calls the Flagbearer system, which use cameras to read the road ahead. At the rear, a five-link axle benefits from the same self-leveling, high-volume air suspension technology, as well as rear-wheel steering. Both axles are managed by Rolls-Royce Planar software. 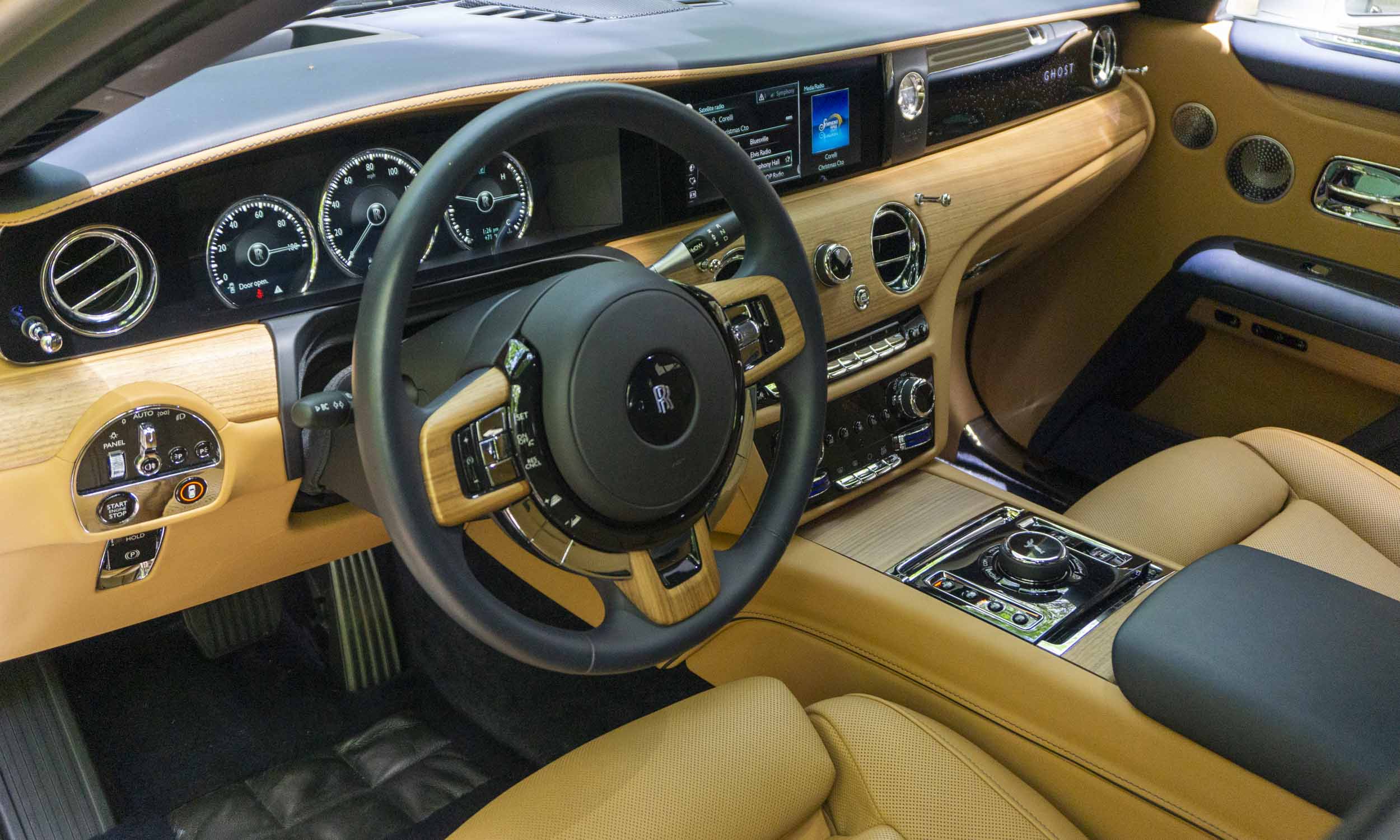 As the latest Rolls-Royce model, this new Ghost is the most technologically advanced car ever from the luxury marque. The combination LED and laser headlights have nearly 2,000 feet of illuminated range. Other advanced features include vision assist with wildlife and pedestrian warning; alertness assistant; self-park; as well as a four-camera system with panoramic view, all-around visibility and helicopter view. Mainstream features include active cruise control; collision warning; cross-traffic warning; lane departure and lane change warning; a Wi-Fi hotspot; and the latest navigation systems. 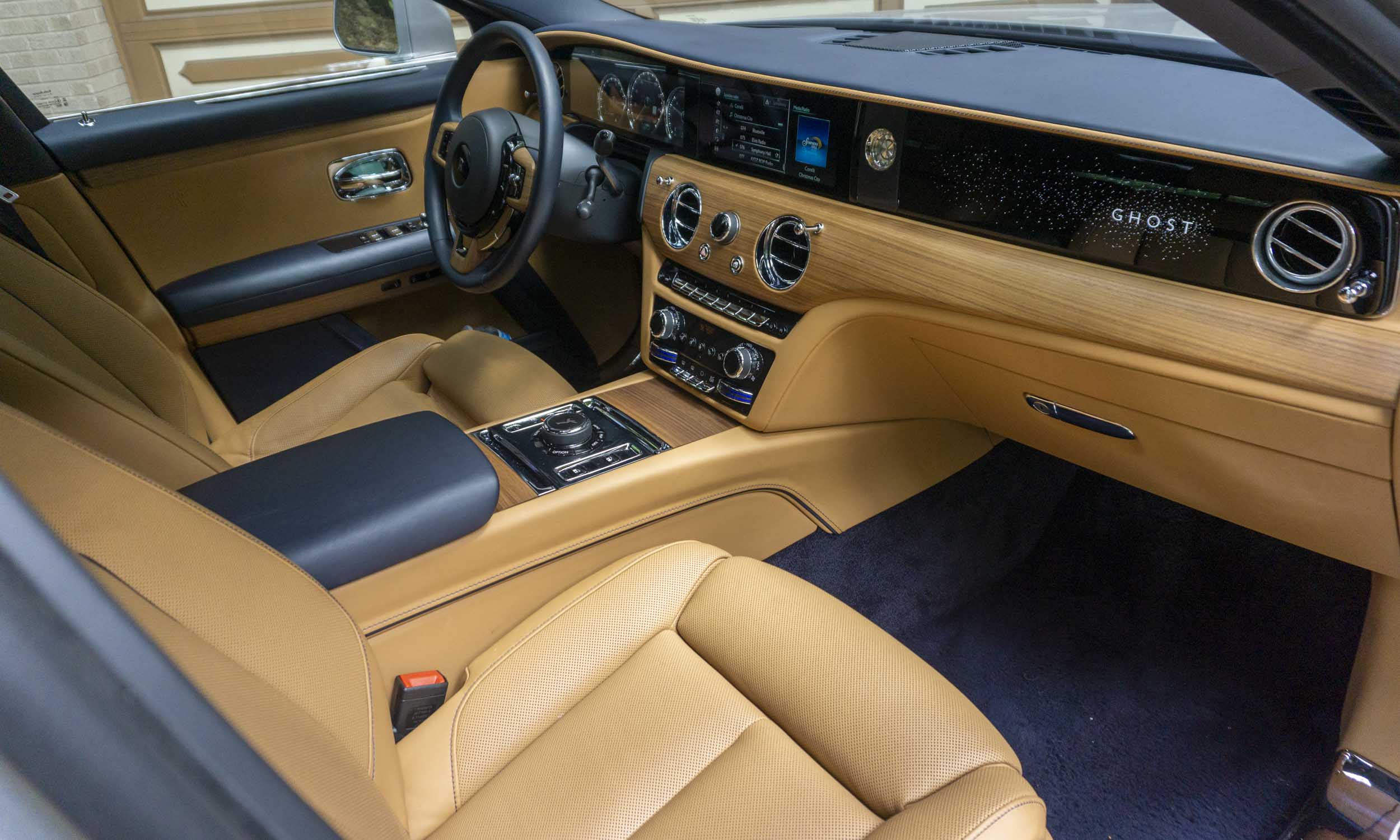 Getting into a Rolls-Royce Ghost — or any Rolls-Royce — for the first time can be a transformative experience. The attention to detail and the premium materials throughout the cabin exude luxury. Although every Rolls-Royce can be created according to an owner’s specific requests, this particular Ghost features open pore Circassian Walnut spanning the dashboard, with a grain that perfectly matches the tan leather and navy blue accents throughout the cabin. Classic push/pull knobs open and close the vents — all controls have an elegant, purposeful feeling. The integrated display screen adds a luxurious layer of high tech, as does the digital instrument cluster. The bespoke analog clock (a $6,200 option) fits well within the clean dashboard design. 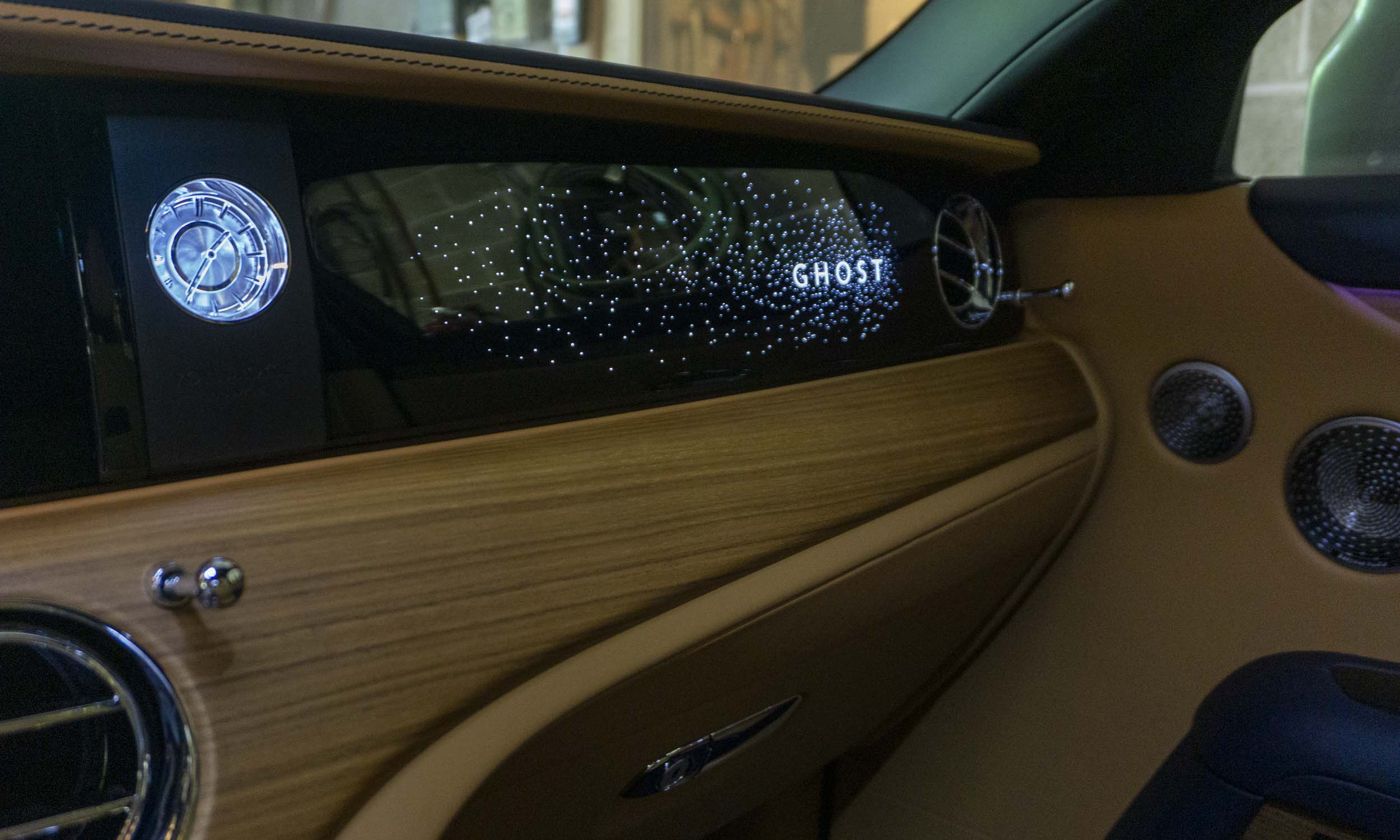 The 2021 Rolls-Royce Ghost includes a beautiful Starlight Headliner that simulates the night sky — a feature that has become standard in recent Rolls-Royce models — but the new Ghost adds an Illuminated Fascia located on the passenger side of the dashboard. The fascia features a glowing Ghost nameplate surrounded by more than 850 “stars” to create a special experience. The Illuminated Fascia is not simply a screen, but a complex system of 152 LEDs mounted above and beneath the fascia, employing a light guide with 90,000 laser-etched dots on the surface to disperse the LED light while creating a twinkling effect. The Illuminated Fascia remains invisible when not in use — the top layer is sealed with tinted lacquer and polished to match other interior elements. 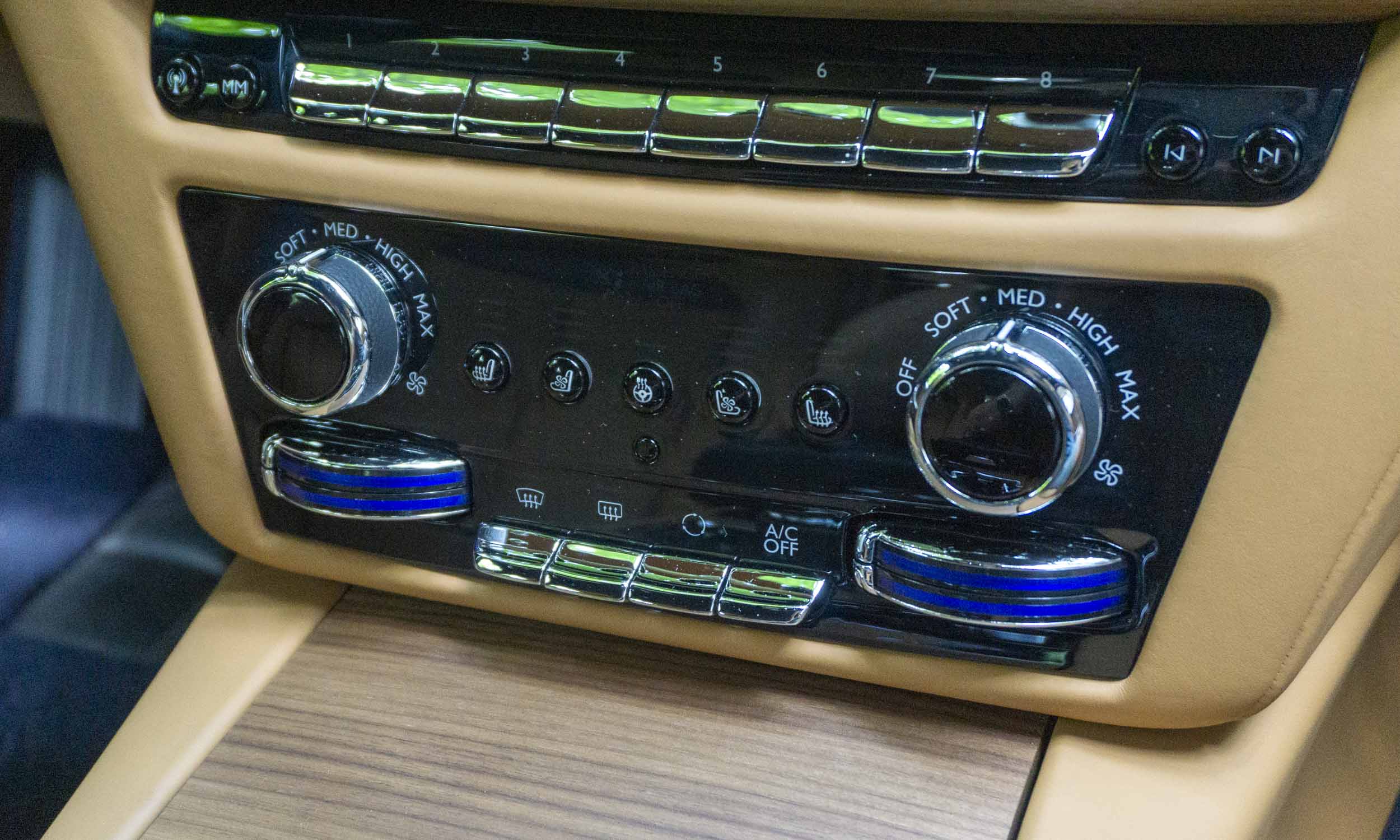 Even with the level of luxury and attention to occupant comfort in the Ghost, a few items surprised us by their absence. Rather than a typical automatic climate control that operates by choosing a specific numerical temperature, the Ghost uses dials to set low and high temperatures — not that there’s anything wrong with that, but there is a bit of guesswork because the controls have no numerical temperature readout — simply dials that go from blue to red. Given Rolls-Royce’s obvious attention to the occupant experience, we were also a bit surprised that the Ghost does not support Android Auto integration — only Apple CarPlay. 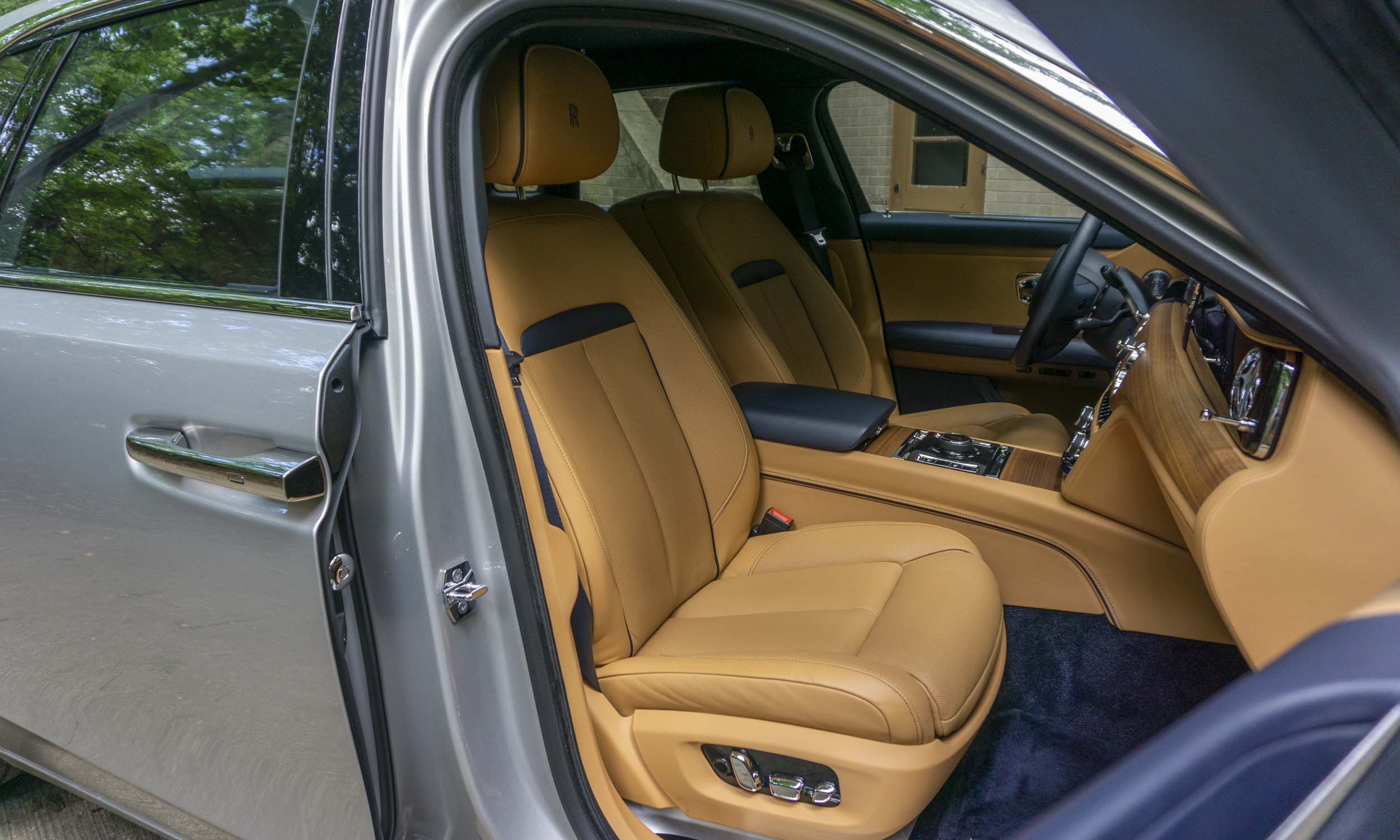 Although the preferred location to experience a Rolls-Royce is from the rear seats, sitting up front in the Ghost is certainly no penalty. The inviting seats are covered in soft leather and offer multiple adjustments. 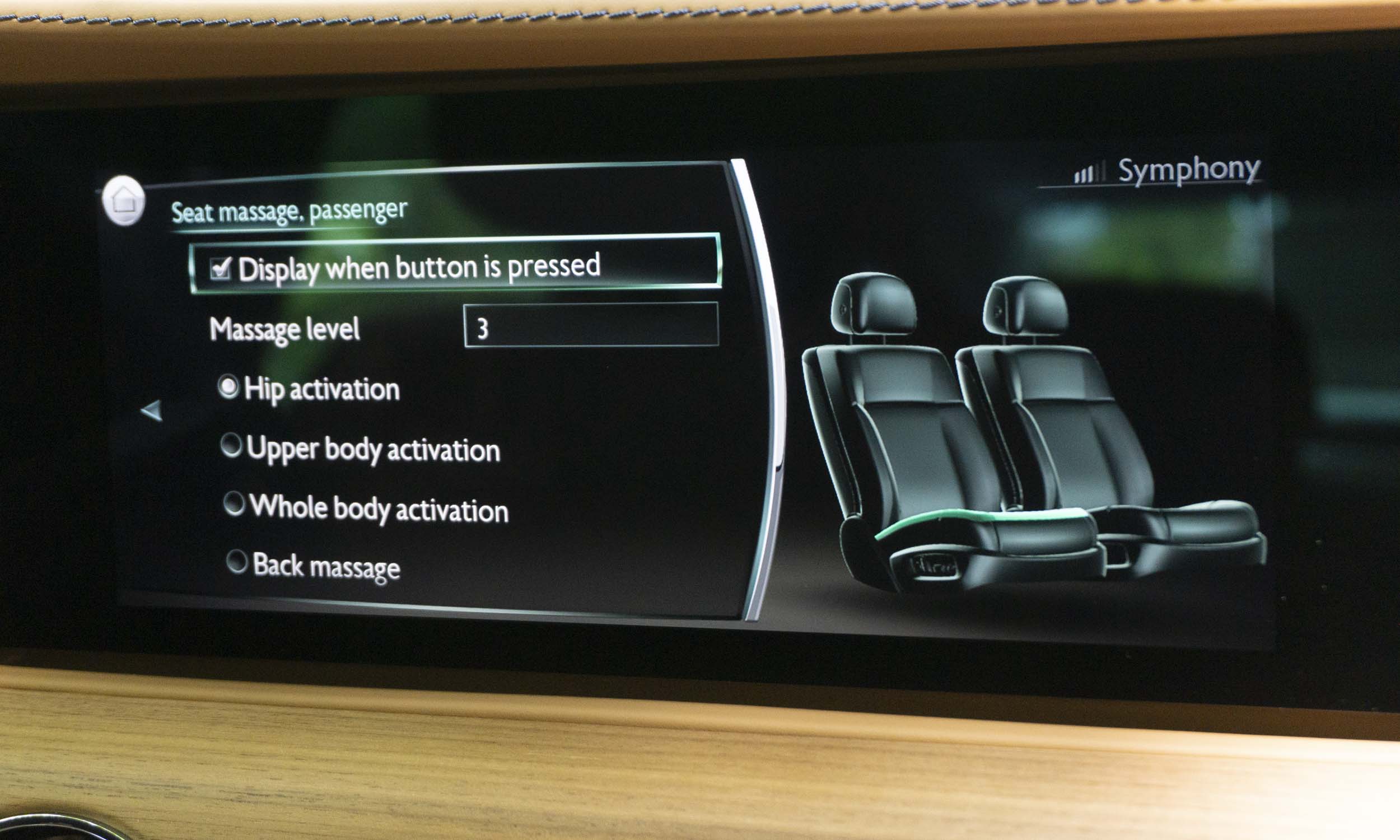 In addition to heating and ventilation functions, the seats are available with a variety of massage programs designed to reduce fatigue on long drives or when stuck in traffic. 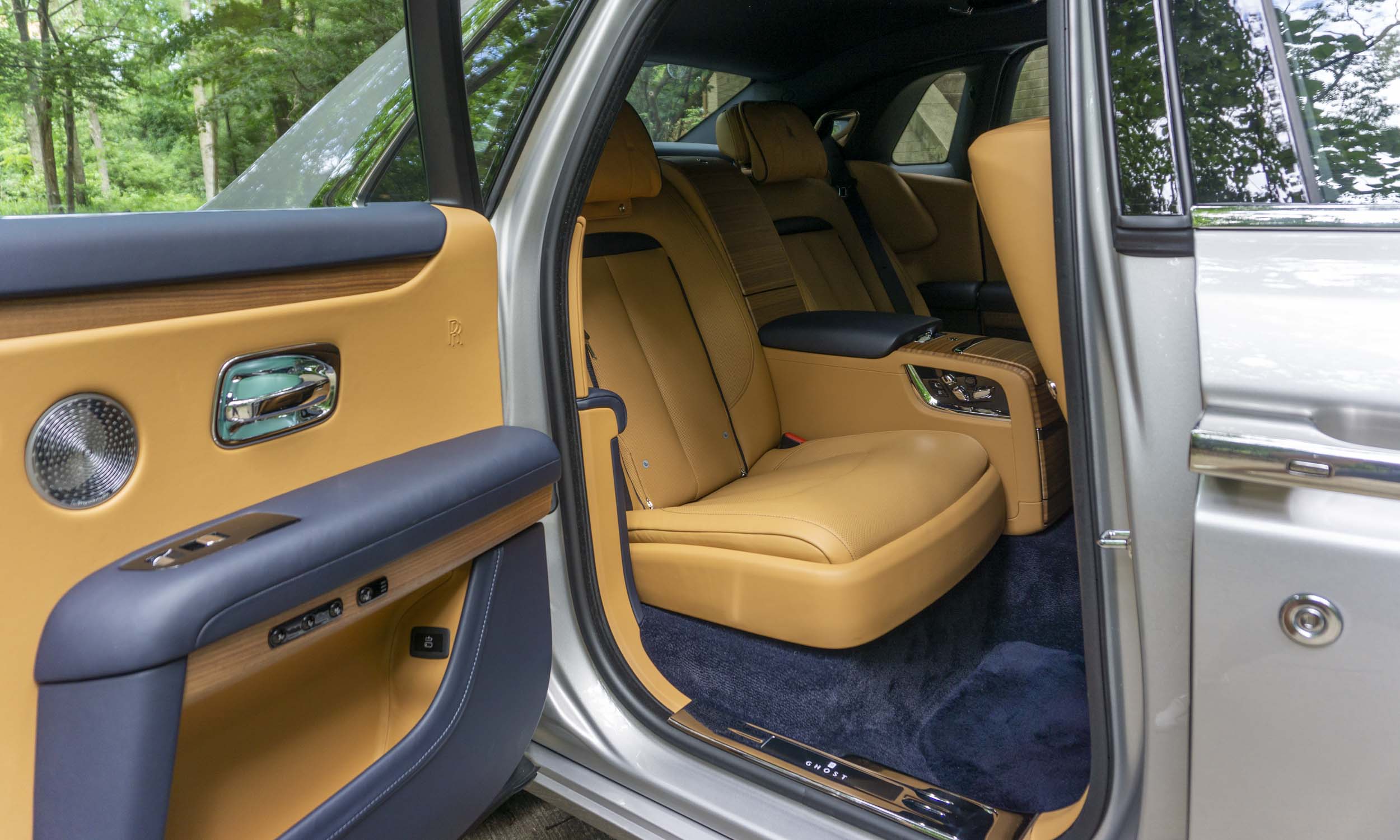 As nice as the Rolls-Royce Ghost can be to drive — more on that later — the rear compartment reigns as the prime occupant location. Large lounge seats are swathed in soft leather with pillowlike head restraints. Lucky occupants might even be tempted to remove their shoes to properly enjoy the lambswool floor covering. Seats can be heated, cooled, massaged and reclined for the utmost comfort. 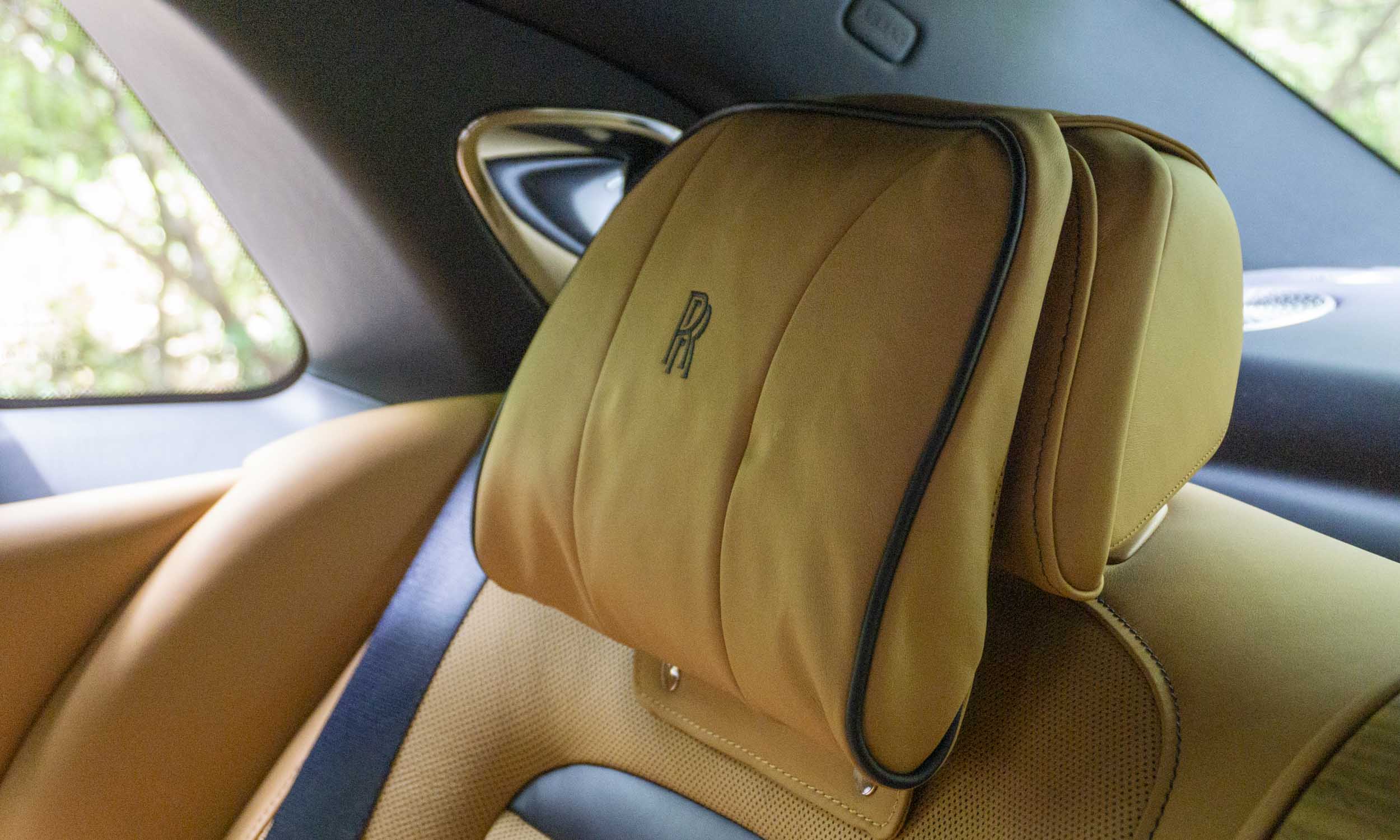 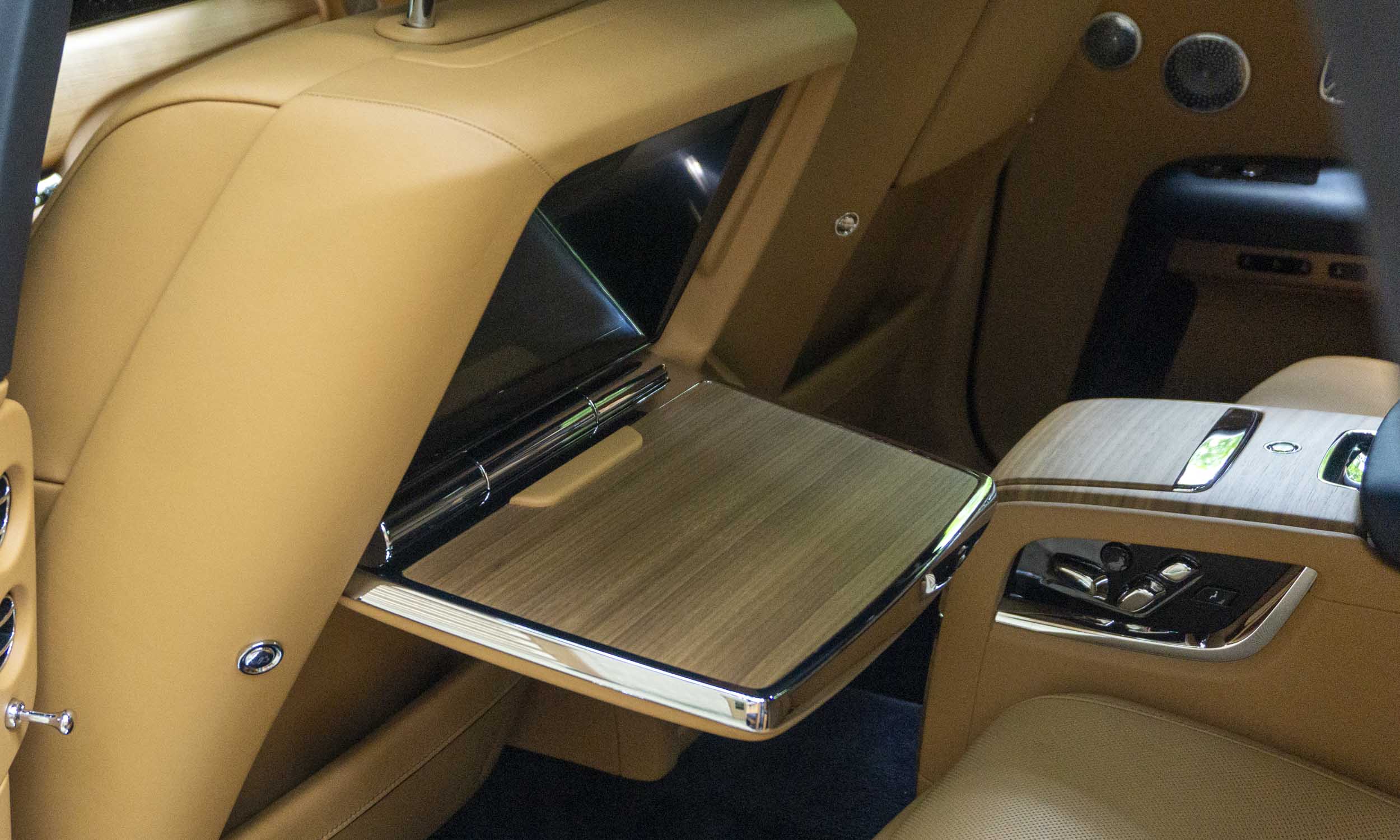 Each of the rear seats features a power-retracting picnic table for work or enjoying a light snack. 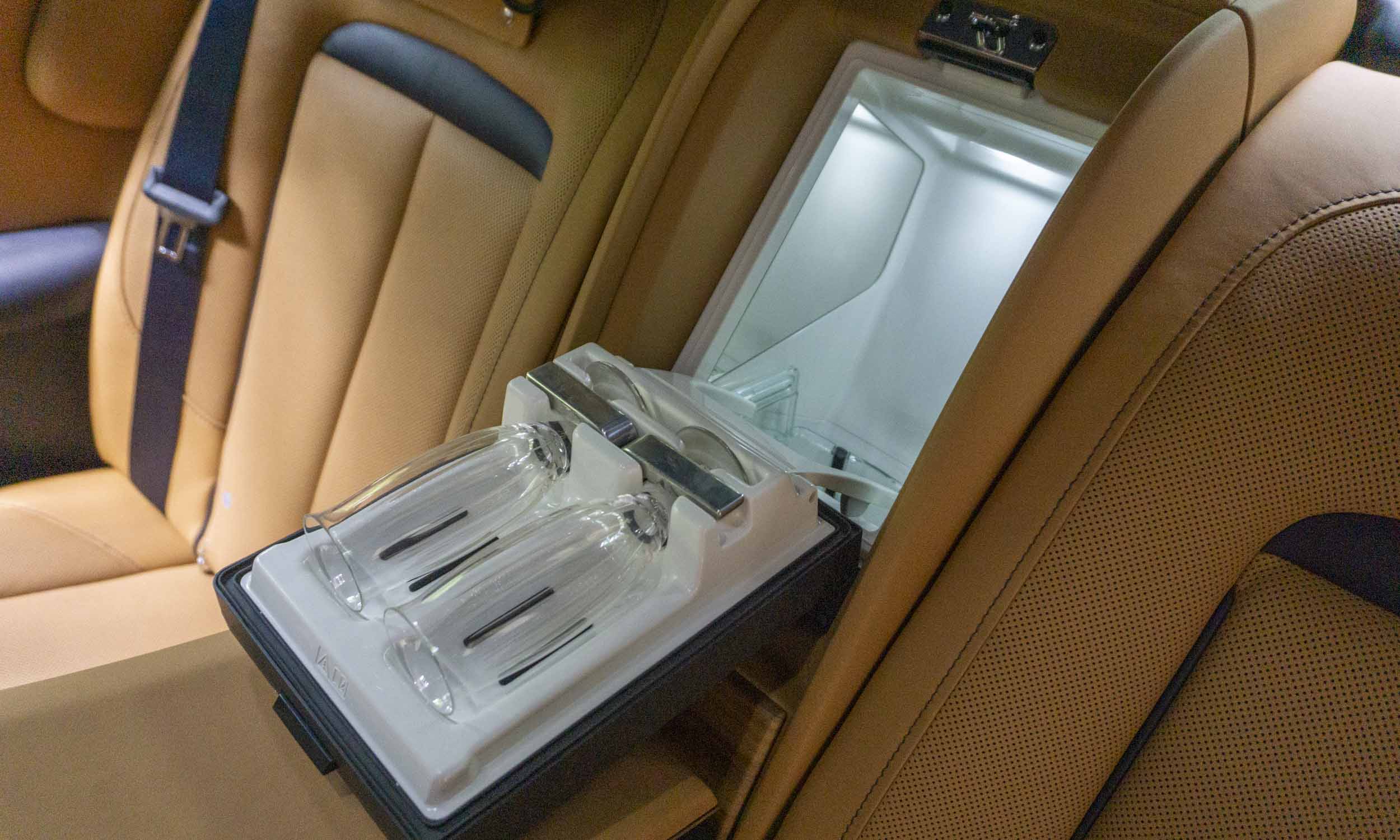 Since the Ghost was technically a loaner, we wisely avoided stocking the Rolls properly for our drive. A Coolbox positioned between the two rear seats keep a bottle of bubbly cold and secure, along with two custom champagne flutes. 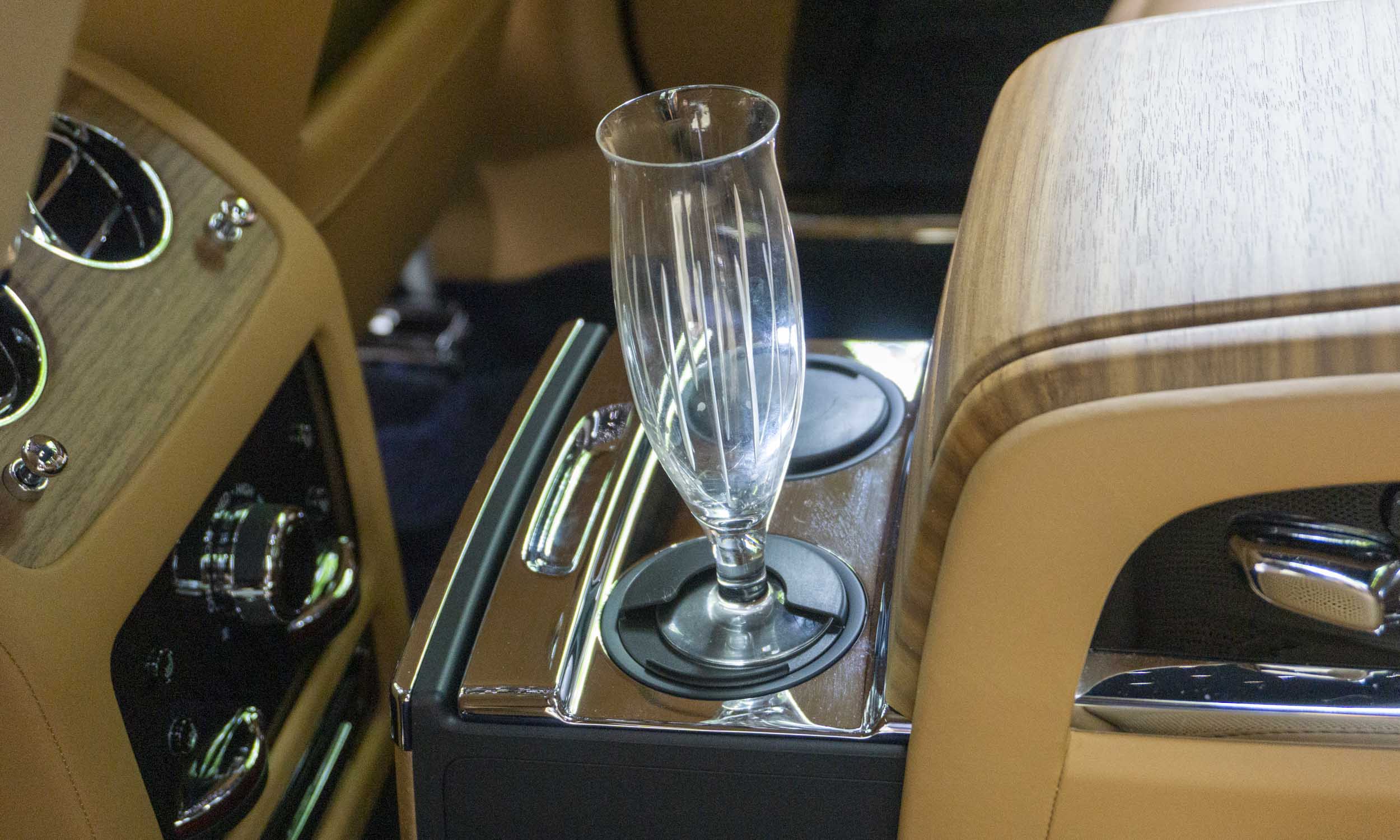 The rear-seat cupholders are designed to hold these champagne flutes in place so not a drop of bubbly gets spilled. An additional bottle in the rear center console can be filled with the passengers’ spirit of choice. 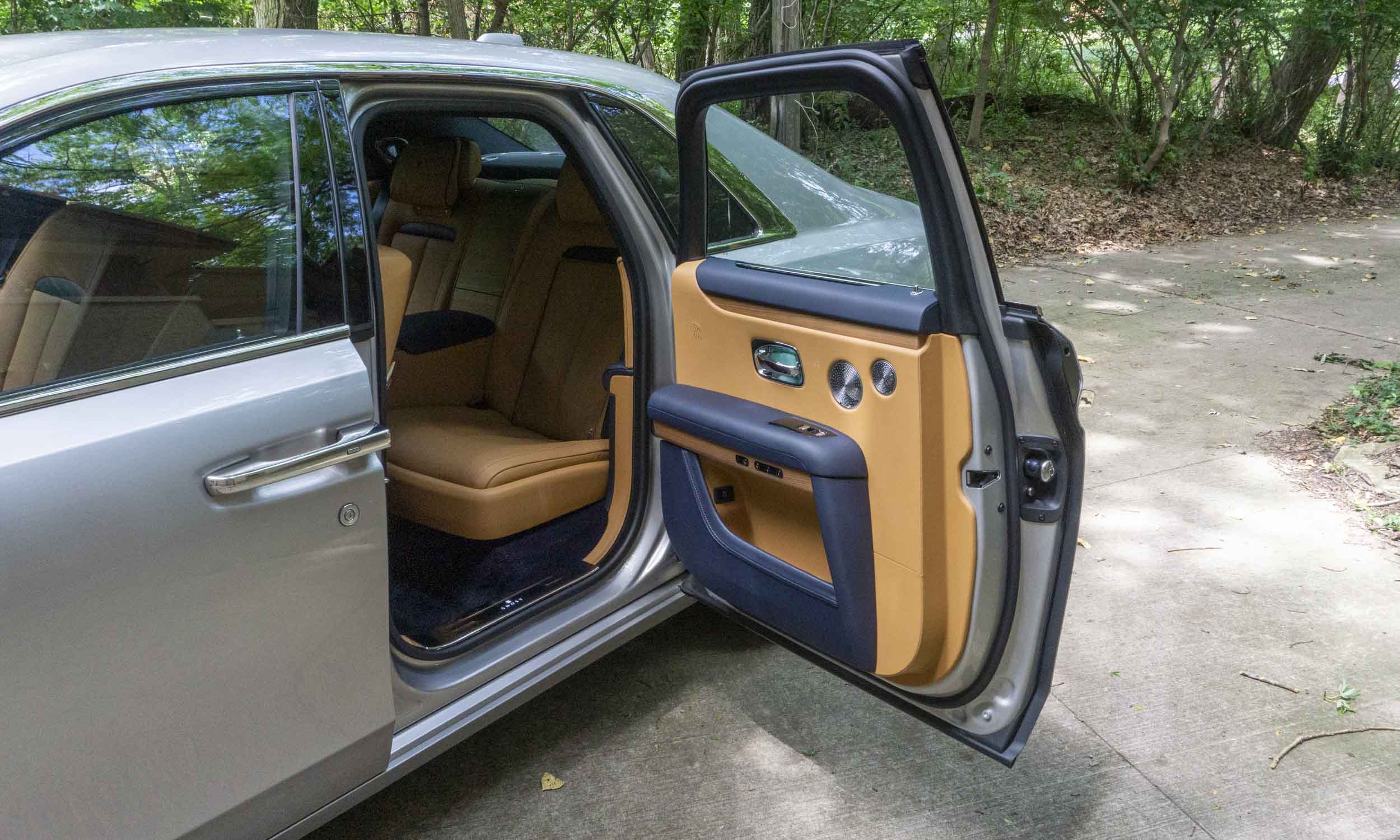 Although many owners of the Rolls-Royce Ghost will likely have a chauffeur to open and close the doors, perhaps that’s no longer necessary. Doors in the new Ghost are power assisted — pull the door handle, then release it to its original position. When the handle is pulled a second time, the door begins to open and continues moving until the handle is released or the door opens completely. Once the person has stepped into the vehicle, the door can by closed automatically by the push of a button. Doors can also be closed manually, with power assist; sensors in the doors ensure they operate at the same rate of speed regardless of pavement slope. 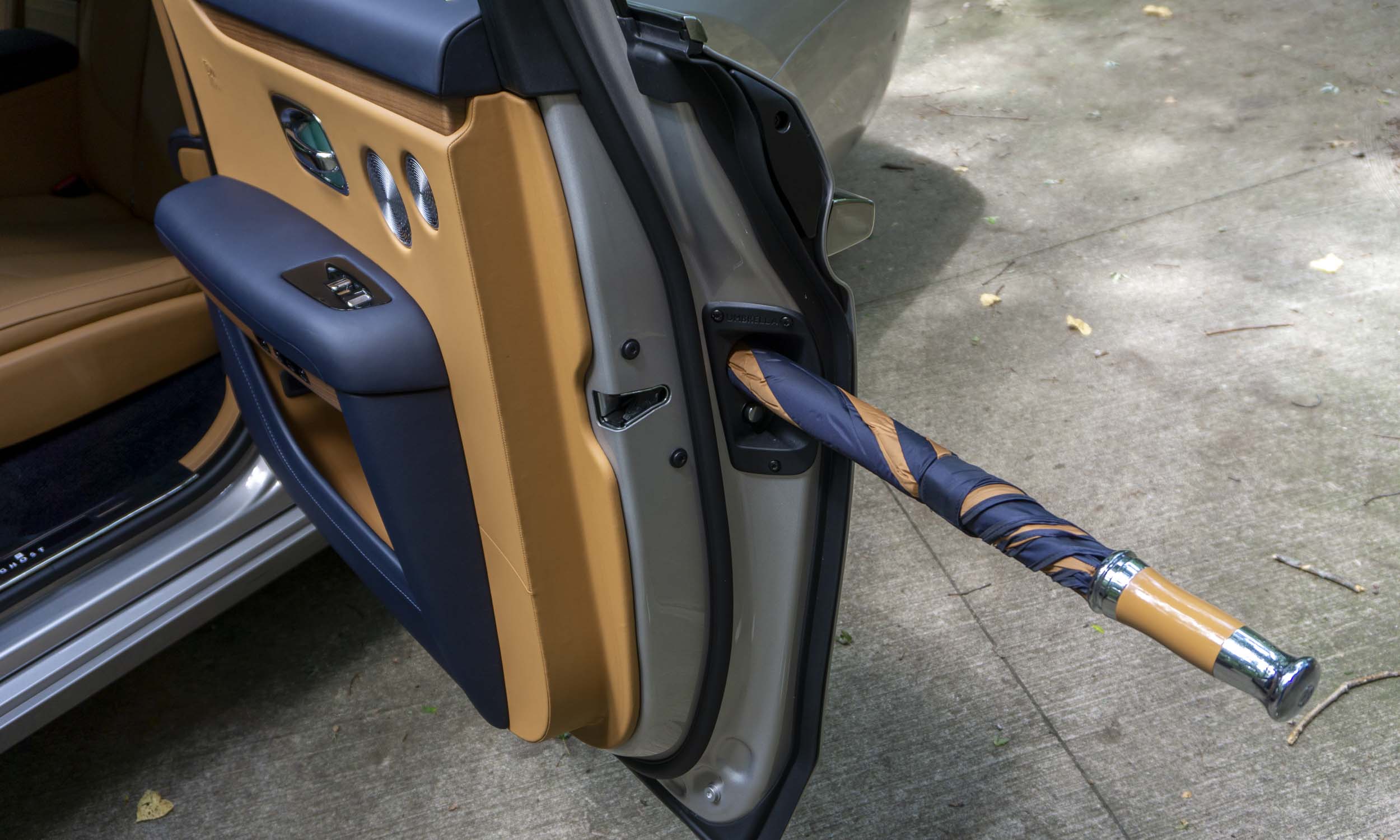 Custom umbrellas have become a hallmark of modern-day Rolls-Royces, and the Ghost is no exception. Encased within each rear door sits a custom umbrella designed to match the interior colors. Pressing a button releases the spring-loaded umbrella for quick cover when exiting the Ghost during inclement weather. Upon returning to the vehicle, the wet umbrella goes back into the door to keep the cabin as dry as possible. 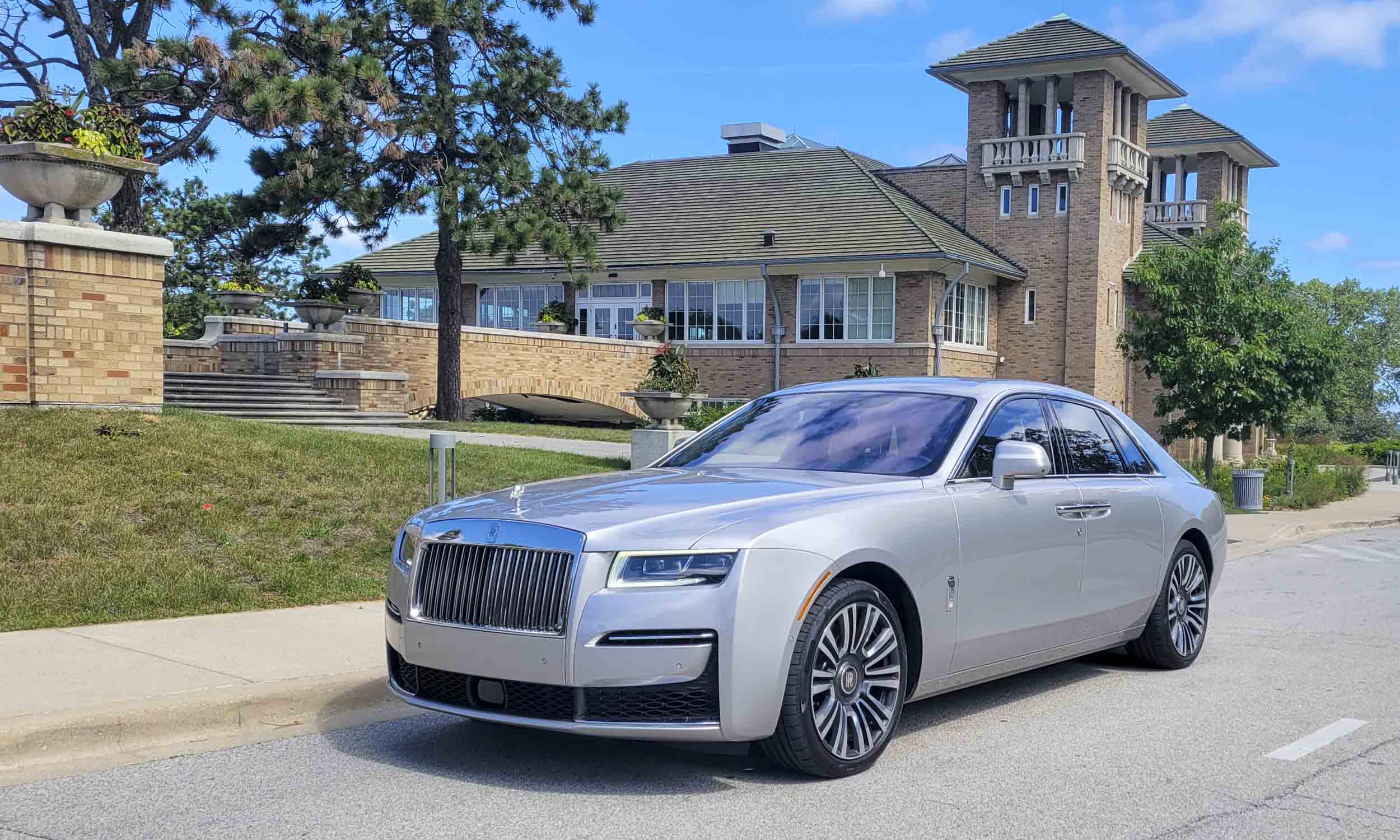 The silky smooth, quiet experience of driving (or riding in) a Rolls-Royce Ghost borders on the sublime. Like the Silver Ghost, this modern homage glides over the road in ghostlike quietude. Power is plentiful and builds with seemingly little effort, moving this very large car quickly as needed. Seeing the speedometer registering 80 mph on the freeway doesn’t seem to compute, since almost no wind or engine noise penetrates the cocoonlike cabin — not quite electric-car quiet, but the Ghost comes close. Every time we took the Rolls out for a drive, my father was blown away by how quick and quiet the Ghost could be. 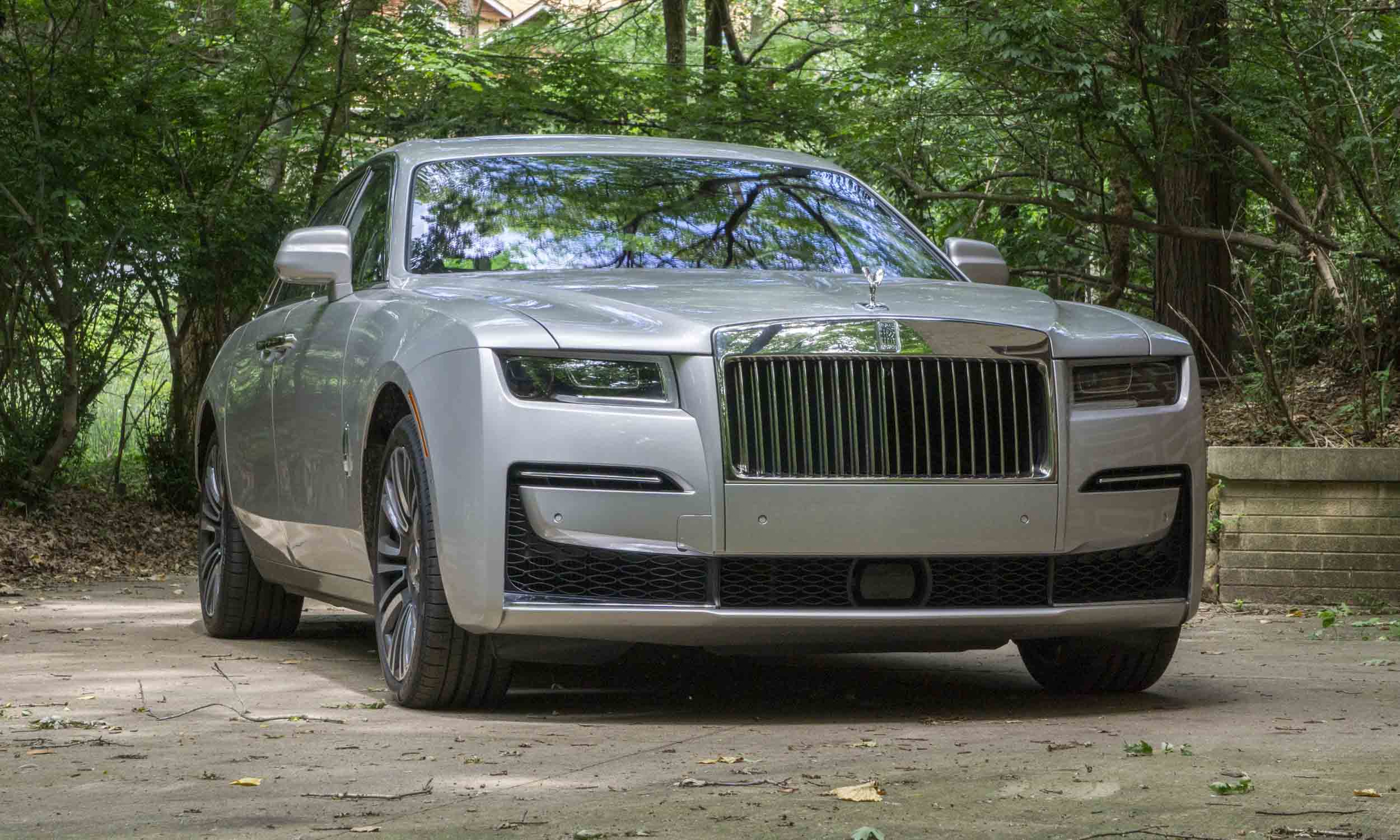 Many of the roads in northwest Indiana are in desperate need of repaving; however, they proved to be an excellent test of Rolls-Royce suspension. In other cars the ride would have been rough and uncomfortable, but the Ghost simply absorbs rough road surfaces, keeping the ride inside smooth and comfortable — as it should be. 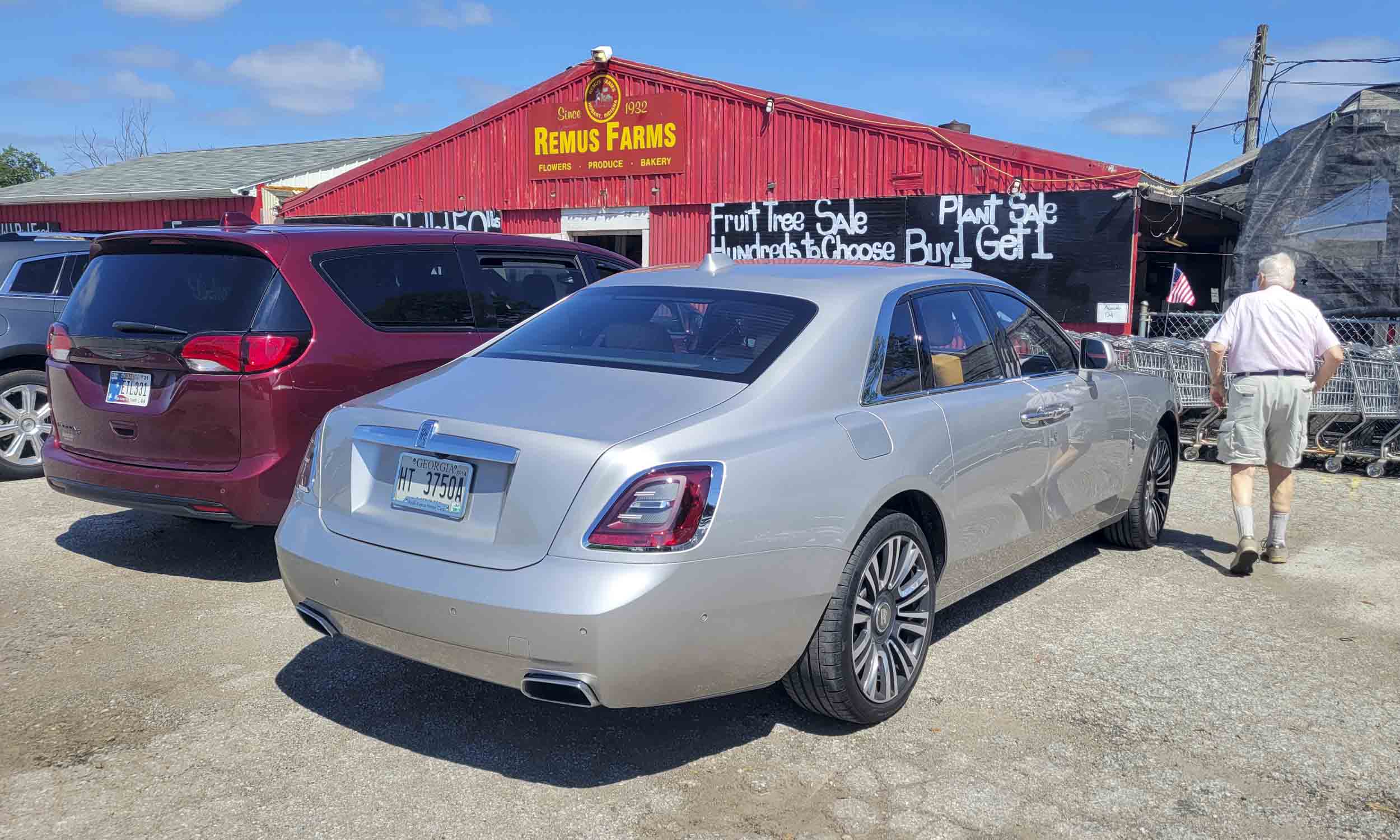 Driving this Rolls around a city where the car is worth more than most of the houses, I was a little apprehensive regarding the type of reaction the Ghost might receive. It was all positive. We received thumbs-up from other drivers, and when stopping to greet neighbors or filling up at the local truck stop people would approach the Ghost and ask — almost in reverence — “Is that a Rolls-Royce?” 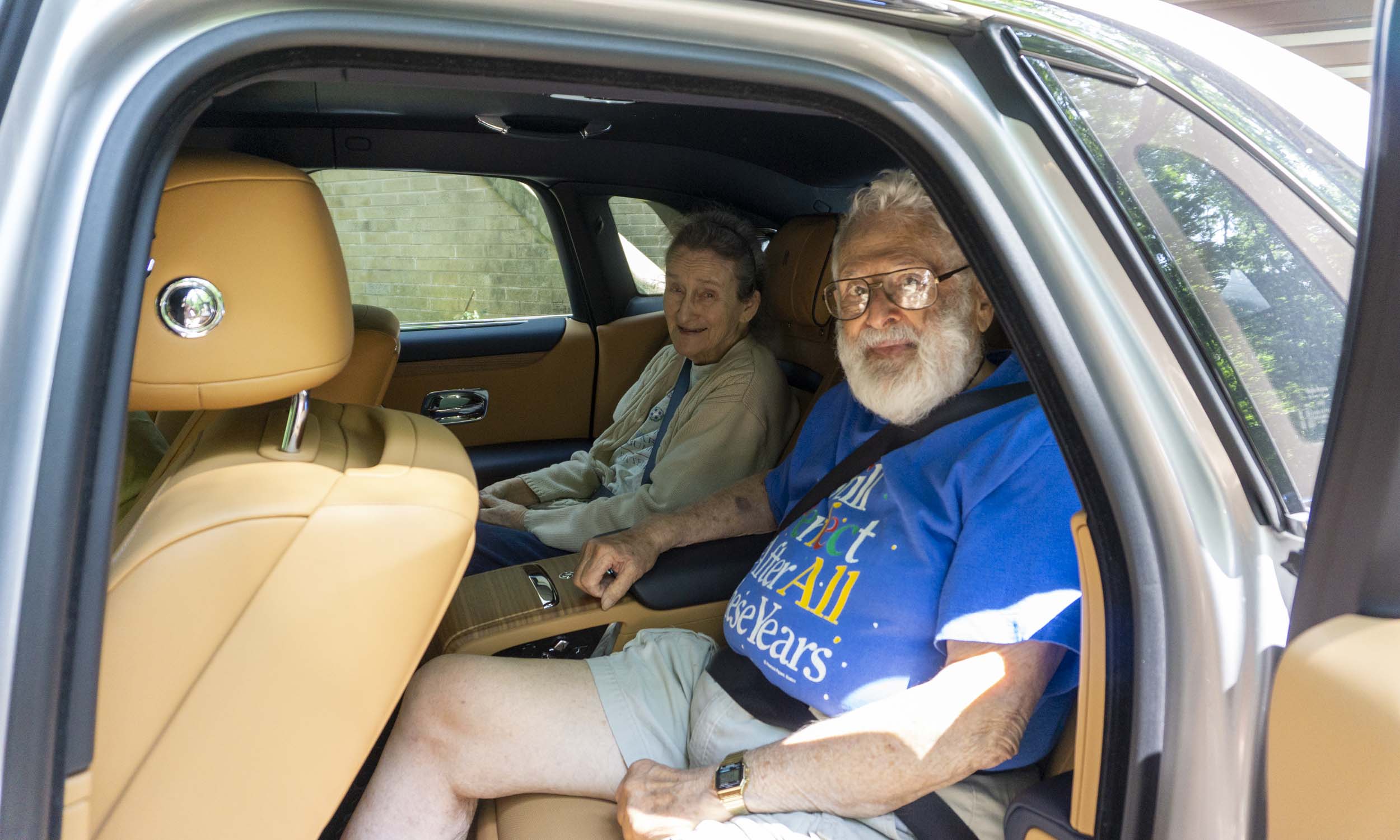 If seeing a Rolls-Royce in the wild is a somewhat rare experience, then getting to ride in one can be unforgettable, especially when it’s the first time. I consider myself grateful and fortunate to have had the opportunity to chauffeur my parents for their first time in a Rolls-Royce — certainly an event that none of us will soon forget. 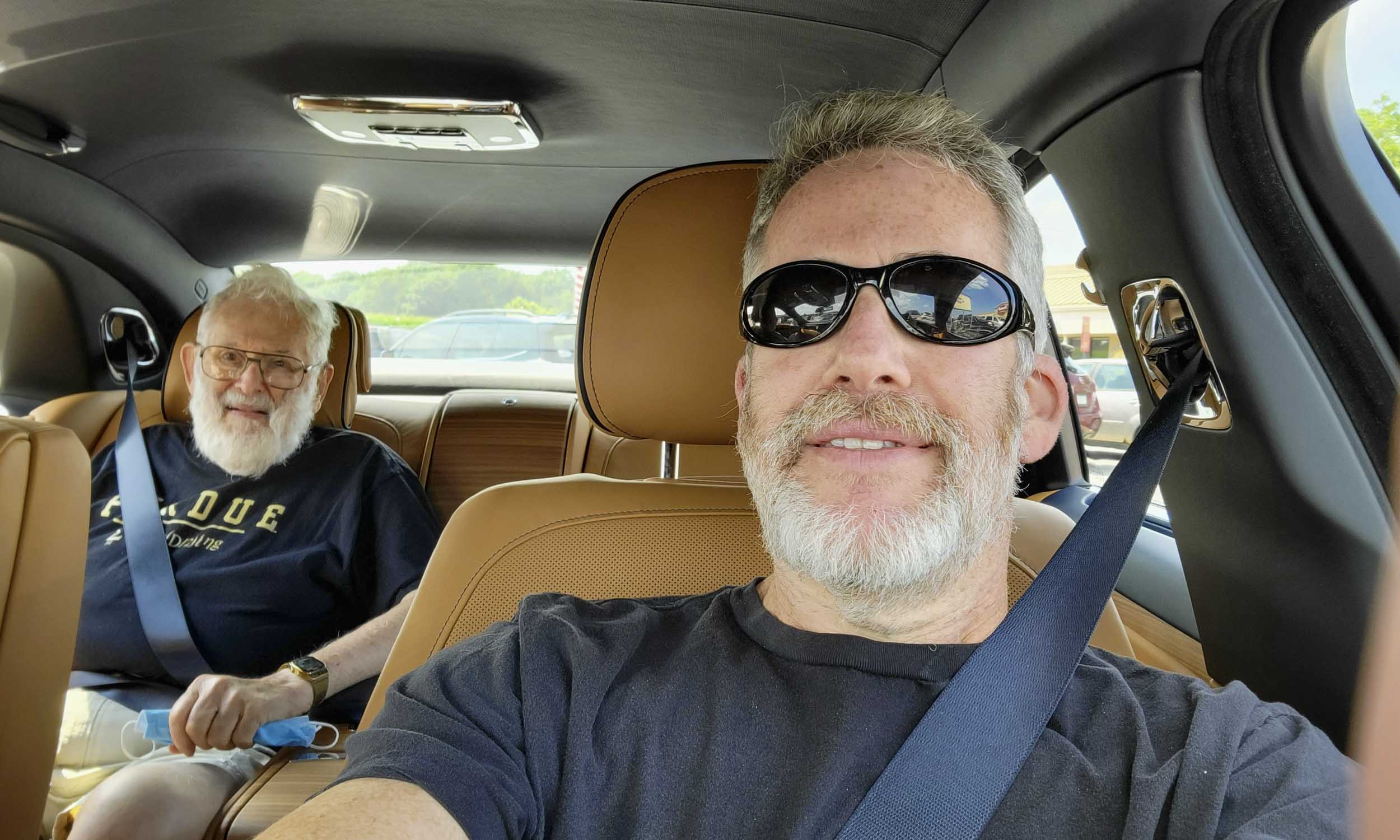 Rating: 9.0
There are plenty of luxury sedans available in America, but the 2021 Rolls-Royce Ghost really does stand alone. Aside from the fact that it is considerably more expensive than its closest competitor, the Ghost has a presence unlike anything else, so it is aptly named. With smooth power, a solid ride and an elegantly luxurious interior, the Ghost is an experience reserved for a fortunate few. I’m pleased that my father now joins that club, even if not as a sustaining member. 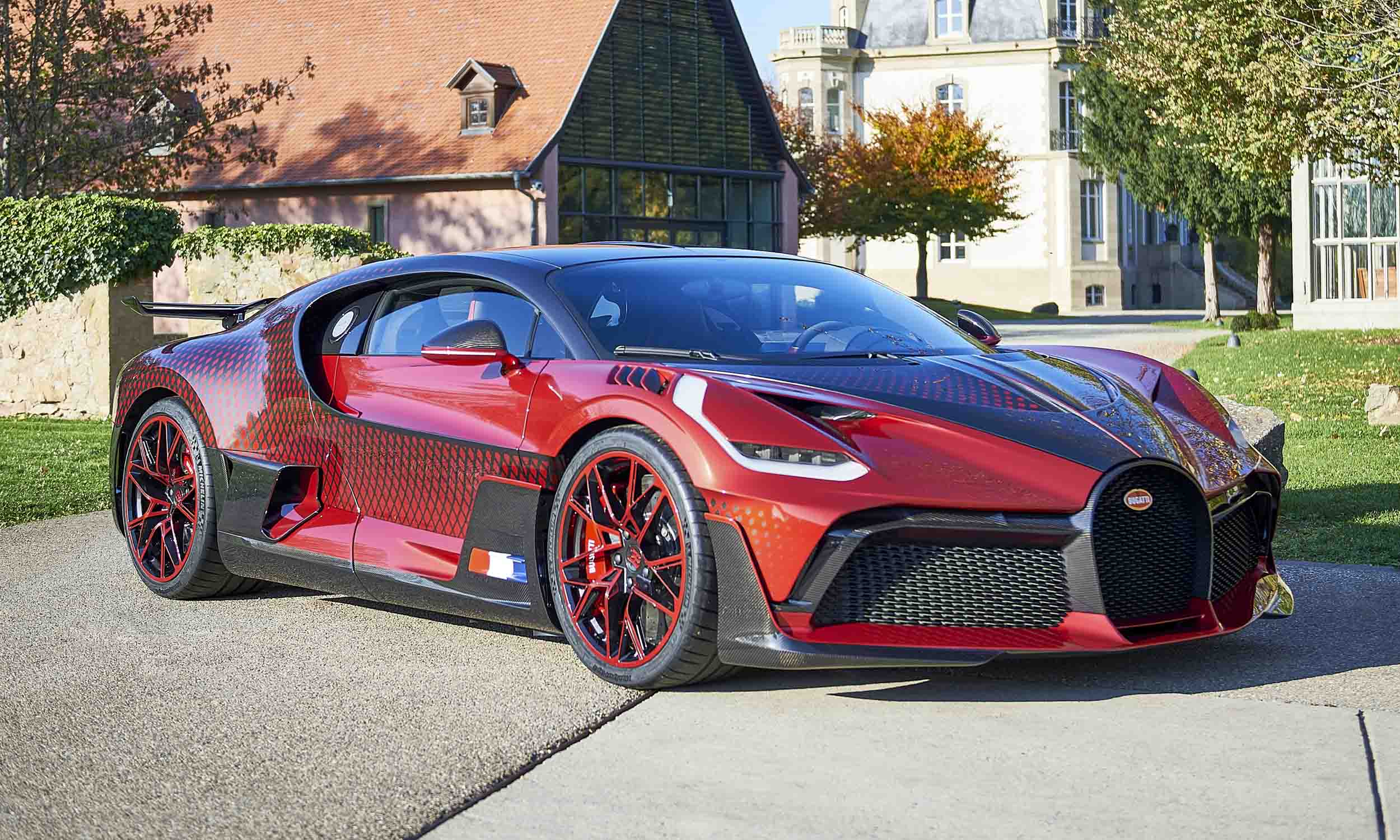 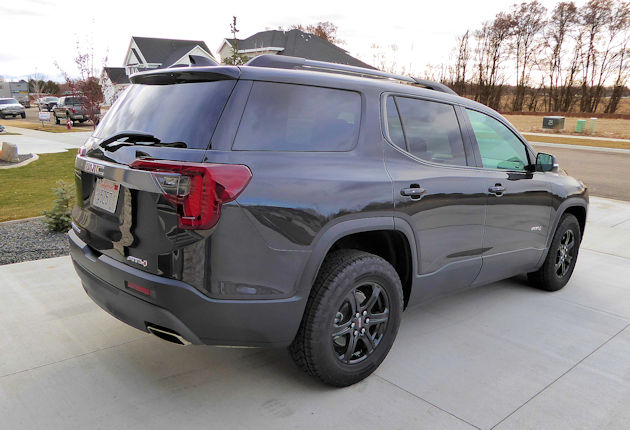