“2021 Ford Mustang Mach-E”
Will Mustang Devotees Get A Charge Out of the Mach-E? 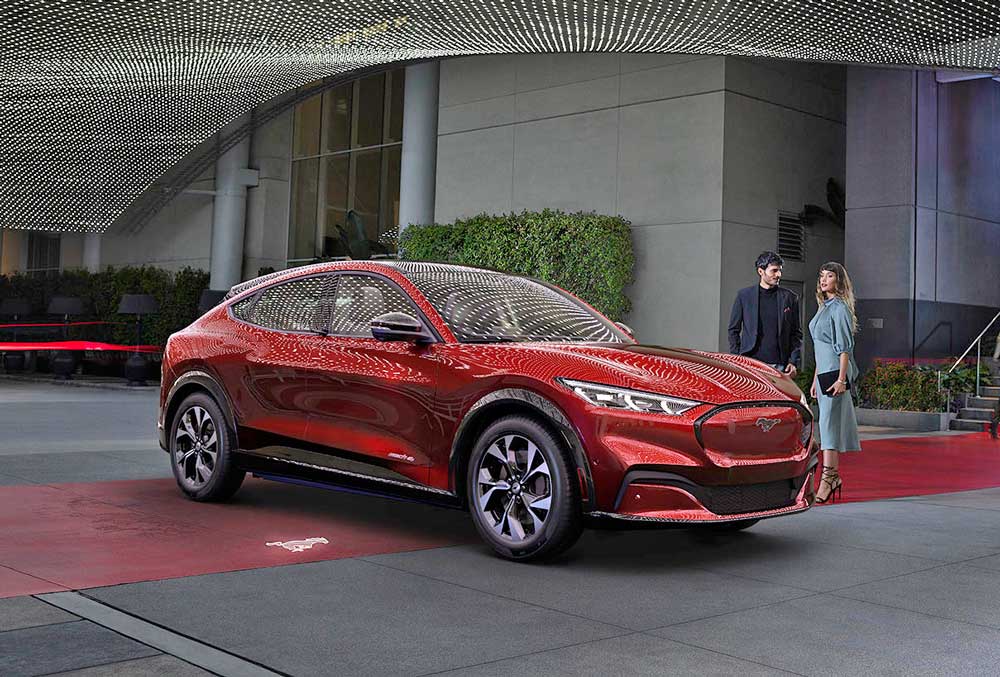 The first Ford Mustang Pony car appeared in 1964 and up until now, the Mustang was always only available in either coupe or convertible form in several variations. Later this year, the Mustang will be introduced as a horse of a different color, taking on the form of an all-electric crossover with comfortable accommodations for five – the 2021 Ford Mustang Mach-E, expanding the Mustang stable for the first time in 55 years.

While many hardcore aficionados may turn up their noses at just the very thought of an electrified Mustang, let alone in electric form, Ford has indicated that it will deliver what promises to be to be one of the most technologically advanced vehicles that they’ve ever turned out without abandoning the iconic Mustang appeal. 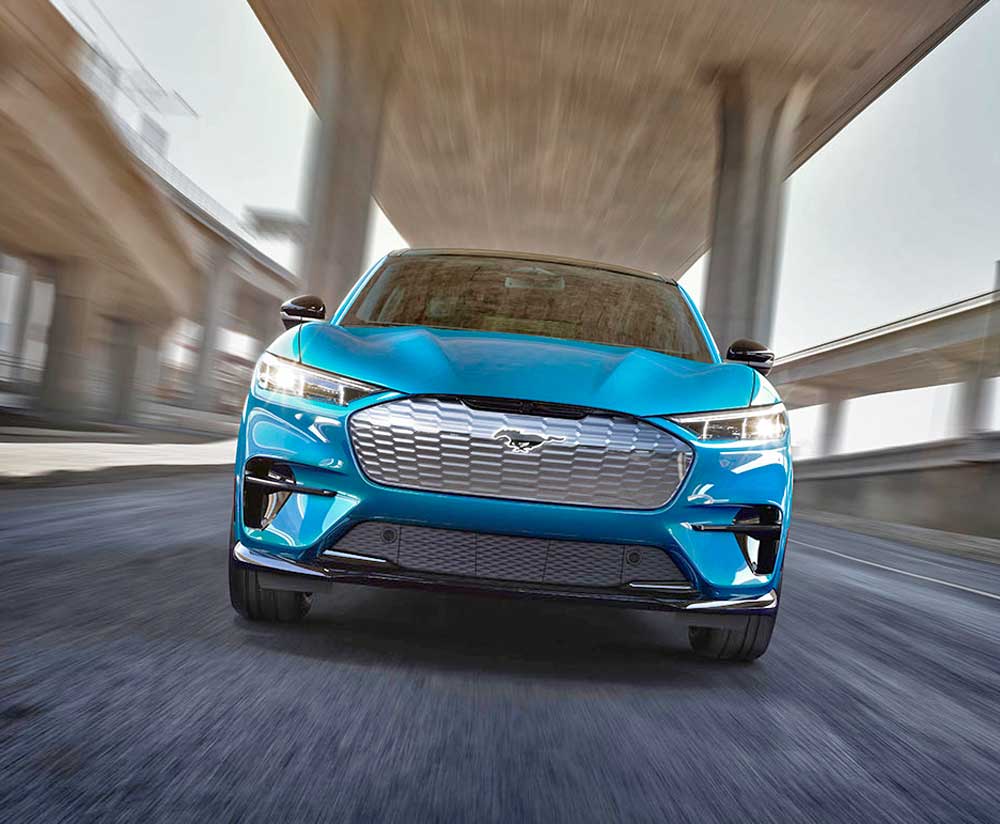 The 2021 Mustang Mach-E will be a five-passenger (perish the thought) crossover that will come in five levels of trim in either RWD or AWD depending upon trim level chosen. Select is the base model, followed by Premium, First Edition, California Route 1 and finally the GT, which is expected to be the preferred model, with a spring 2021 availability,

Select and Premium trims are available in either AWD or RWD, First Edition is AWD only, California Route 1 comes in only RWD, and the Mach-E GT will be available only in an AWD configuration , powered by electric motors that crank out 459 horsepower along with 612 pound feet of torque. Ford figures that the GT will scoot from 0-60 mph in a mere 3.5 seconds. It will roll on 20-inch forged alloy wheels in a dark finish, backed by red brake calipers. It will feature a uniquely specific grille that will add to its exclusivity. 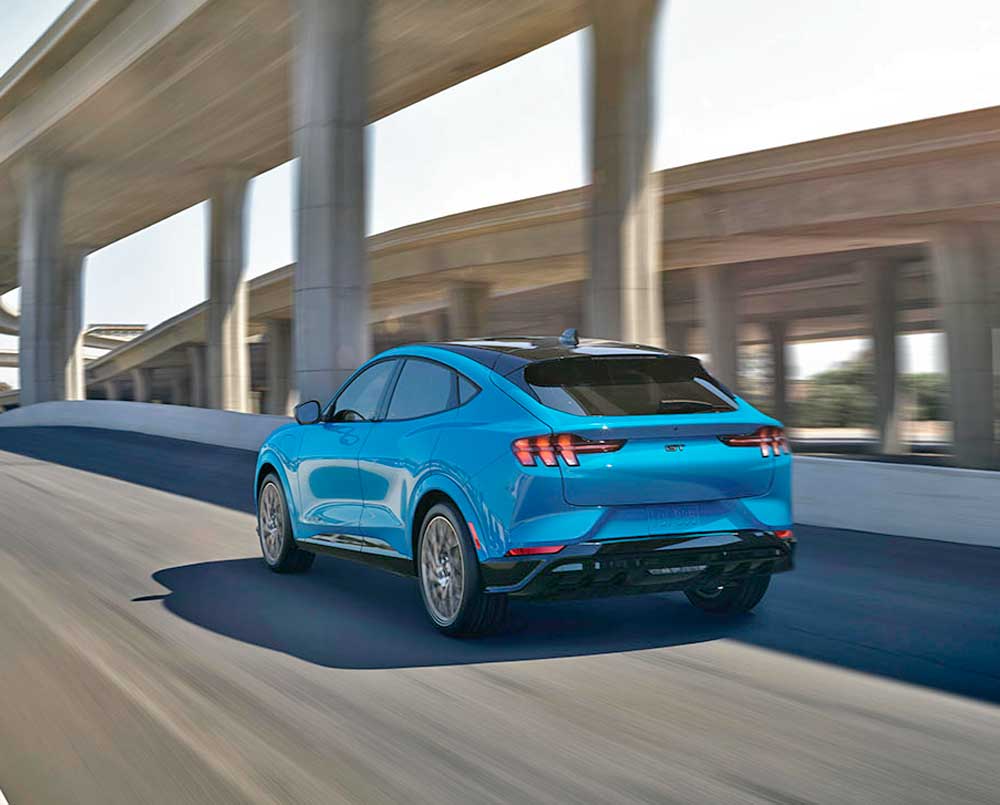 Will the Mach-E appear to be a Mustang in the traditional sense? No, but the all new, all electric Mustang Mach-E will provide a satisfactory level of fast fun and a new level of freedom for a new group of Mustang consumers, while retaining several visual cues aimed at connecting the Mach-E with classic Mustang styling. Proudly positioned on Mach-E’s front end sans grille will be the familiar Mustang pony image. The rear will feature familiar Mustang taillights that illuminate sequentially as turn indicators. The wide stance, elongated hood, gracefully curved roofline, sculpted side panels and boldly pronounced fenders, the Mach-E Showcases a high-performance persona.  Not a single Ford Blue Oval graces the surface of the Mach-E’s skin. Door handles are also non-existent, with illuminated buttons taking their place on both the “B” and “C” pillars. 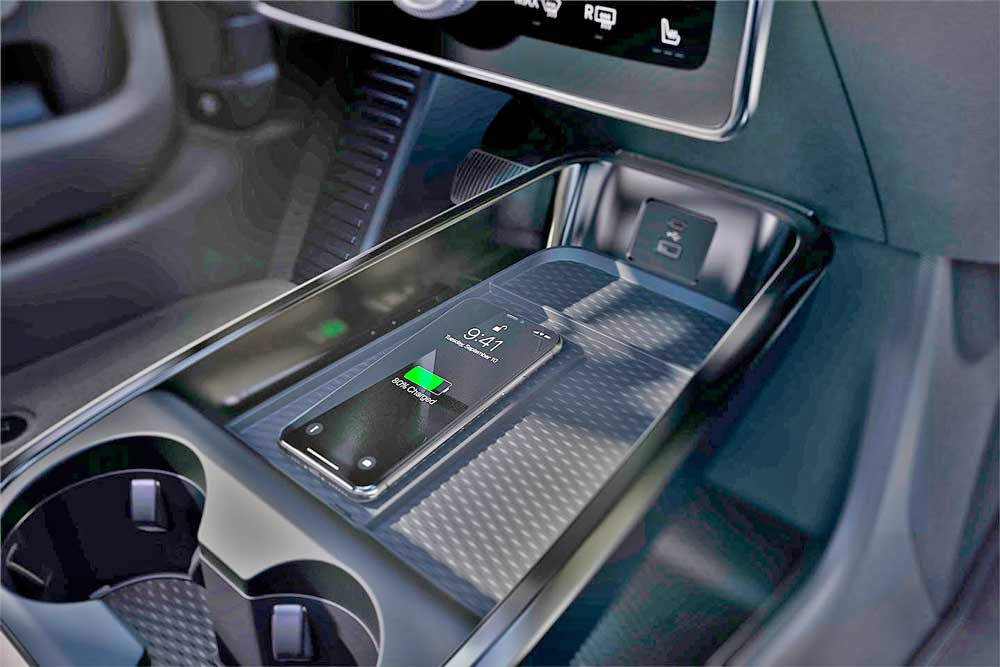 The Mach-E, marks the official beginning of Ford’s electrification era. Built on all-new EV-specific platform, the latest Ford Mustang sets out to illustrate that non- internal combustion engine propelled vehicles can be both fun to drive and affordable. EV drivetrain technology provides an impressive driving range on a single charge helping to eliminate range anxiety. The Tesla has lost its exclusivity in terms of turning out highly appealing electric vehicles. The SUV body style was selected for this new Mustang, primarily due to the heightened appeal and the fact that it better meets consumer’s daily driving scenarios. 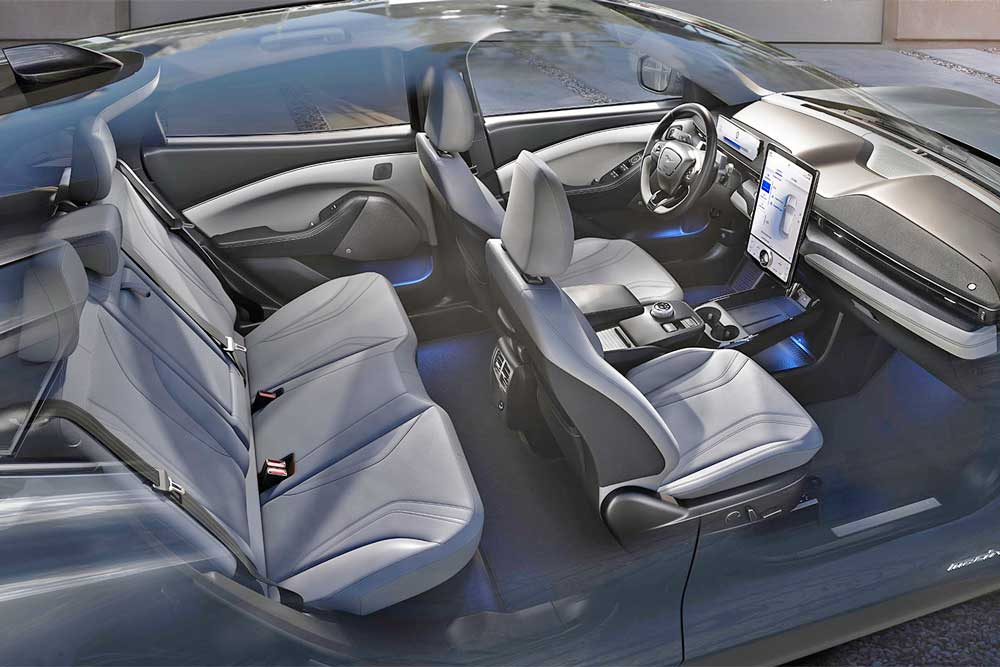 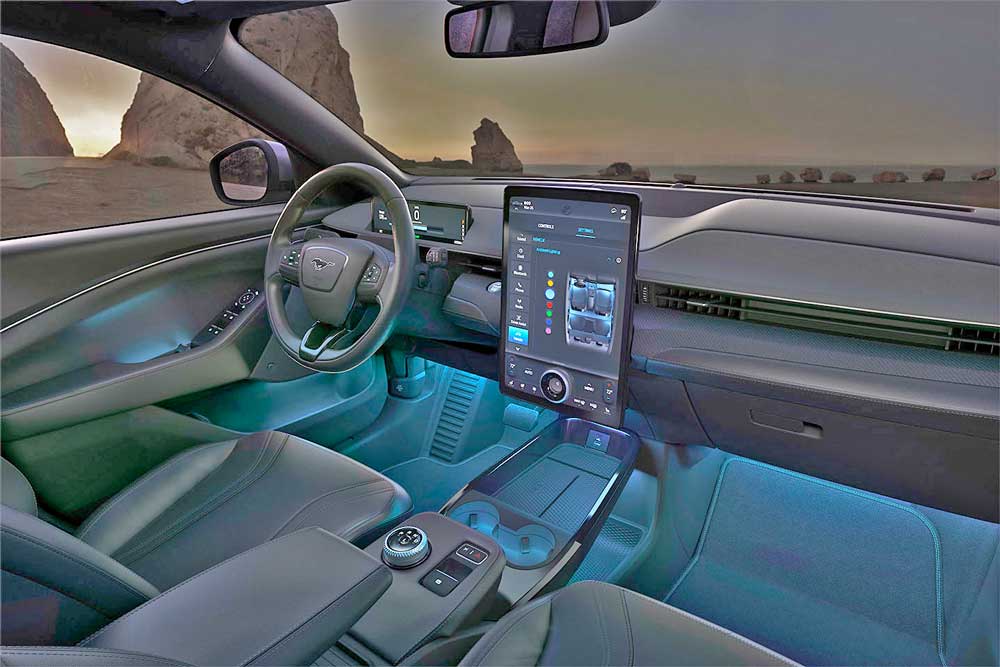 Those seeking a sense of openness will enjoy the optional panoramic fixed-glass roof that features a special glass coating with infrared protection to help keep the interior cool in the summer and warm in the winter. 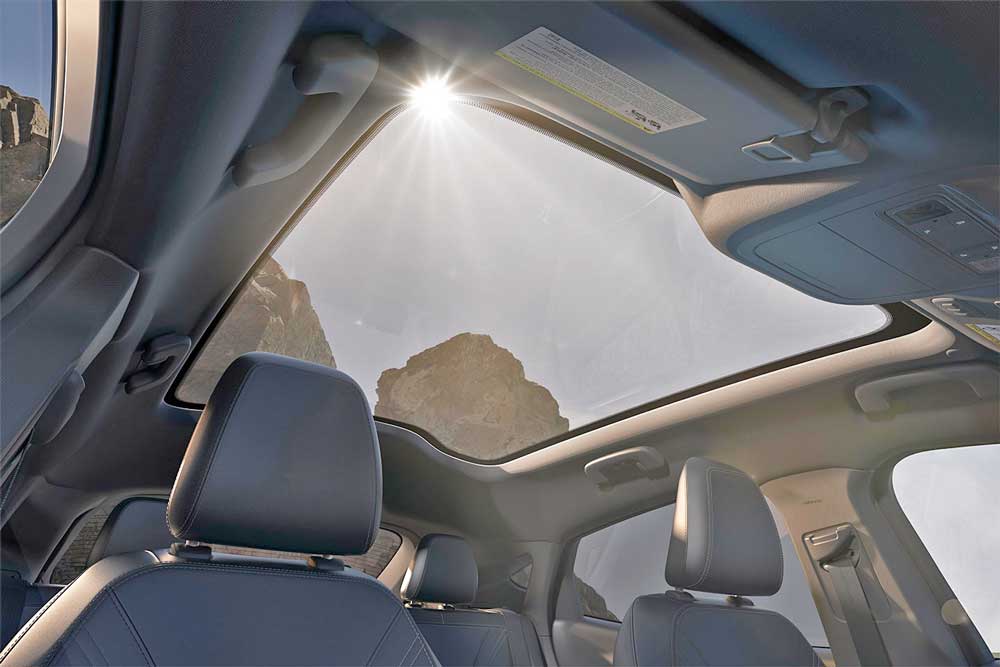 The Blue Oval team added to interior space by positioning the batteries inside the underbody. The rear trunk delivers 23 cubic feet of space, which increases to 59.6 cubic feet. with the rear seats folded down. In addition to the rear cargo area, the Mach E serves up a front trunk or “Frunk” with another 4.8 cubic feet of drainable storage space, enabling it to be filled with ice for keeping beverages cold. 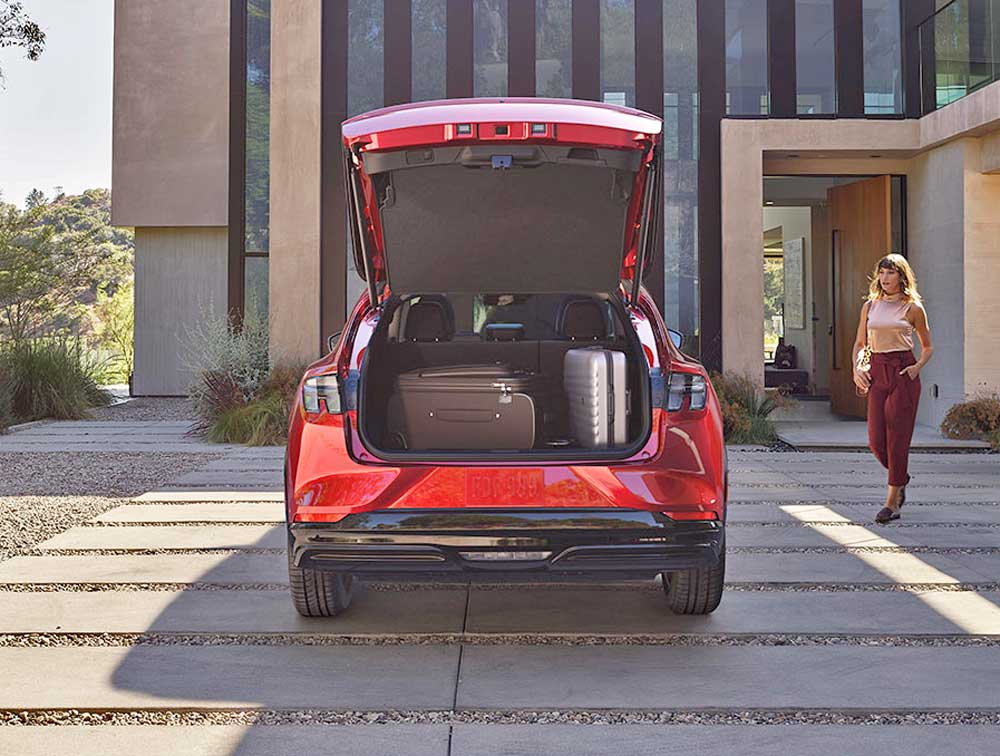 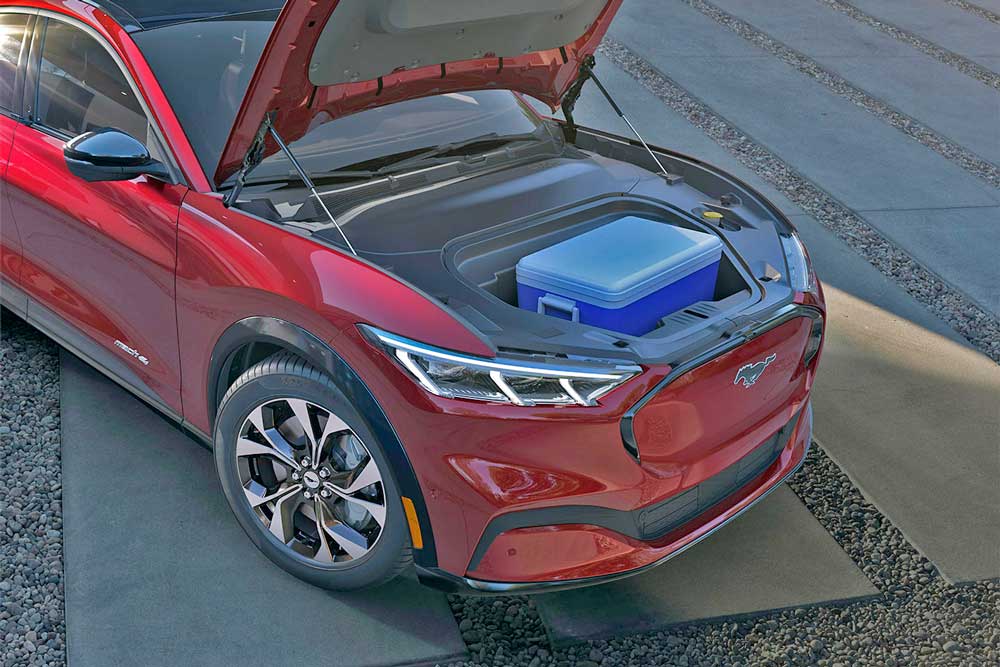 The Mach-E all-wheel-drive system employs two electric motors and will be apply torque independently to the front or rear axles for exceptional traction under acceleration, as well as better grip and handling on slick road surfaces.

The electric motors propelling the Mach-E are powered by lithium-ion batteries – a standard-range 75.7 kWh lithium-ion battery or a 98.8 kWh extended range battery. The 98.8 kWh battery has a targeted EPA-estimated range of at least 300 miles in the rear-wheel-drive configuration. The 75.7 kWh battery is good for 230 miles with RWD, while the GT model provides a range of 235 miles. A majority of owners will likely recharge at home, so the Mach-E is comes with a Ford Connected Charging station that adds up to 32 miles of range per hour on a household 240-volt outlet. This charger can add an estimated average range of 22 miles per charging hour with that same voltage. The lithium-ion battery pack is located between the axles, which provides a more spacious interior as well as keeping the crossover’s center of gravity lower for better handling and performance. The batteries are liquid-cooled units for improved performance in extreme temperatures, and they are stored inside a waterproof case surrounded by crash-absorption protection. 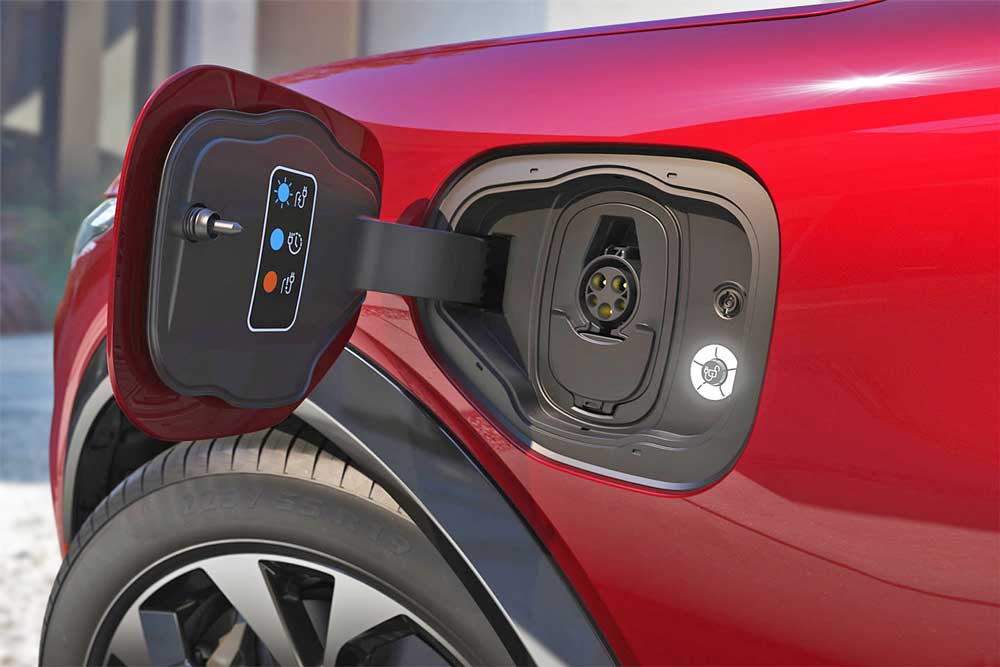 Ford is teaming up with Electrify America offering owners with access to the largest US public charging network that currently more than 12,500 stations. Plugged into a DC charger with a peak charging rate of 150 kW, the extended-range RWD Mach-E can add 47 miles of range in about 10 minutes, and charging from 10 to 80 percent takes 38 minutes. 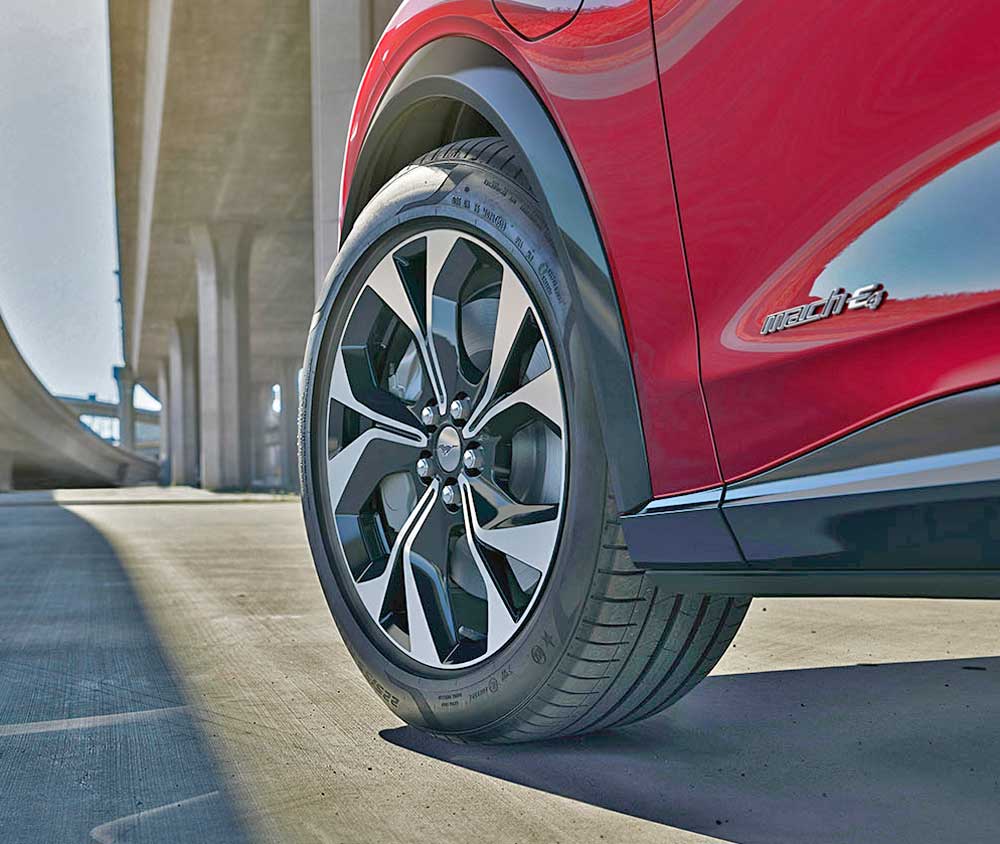 The GT Performance Edition is expected to match the 0-60 mph time of the Mustang Shelby GT 500. There are three driving modes: Whisper, Engage, and Unbridled, with each one offering unique driving dynamics and sensory experiences. Drivers will be able to select throttle control, steering, gauge cluster appearance, and ambient interior lighting. 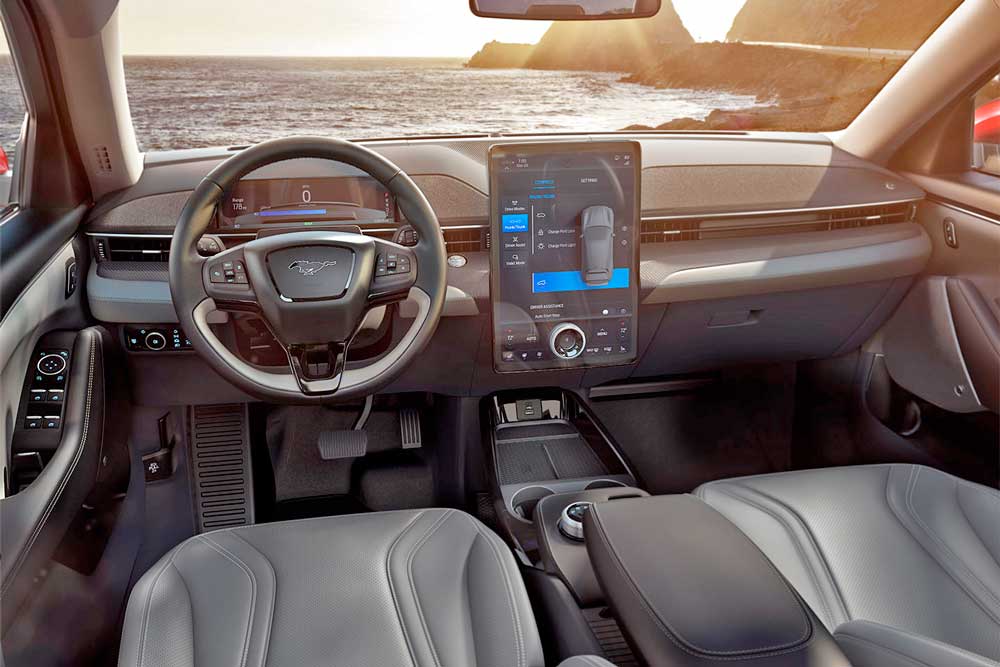 The Mustang Mach-E is the first production vehicle to be tuned by Ford’s Performance division via its North Carolina racing simulator. Additionally available are optional Brembo all-performance Flexira aluminum brake calipers and the GT Performance Edition will be the only Mach-E to include Ford’s MagneRide adaptive suspension technology.

The Mach-E is expected to carry a beginning price point of just under $50,000 and Ford is currently accepting $500 refundable reservation deposits, though deliveries are not expected to get underway until late in the year. Premium and First Edition Mach-Es will be the first to arrive in showrooms, while the GT isn’t scheduled appear until spring of 2021. Potential buyers should know that rather than traditional dealership inventory, the Mach-E will have an order-based delivery system, similar to that of Tesla’s. 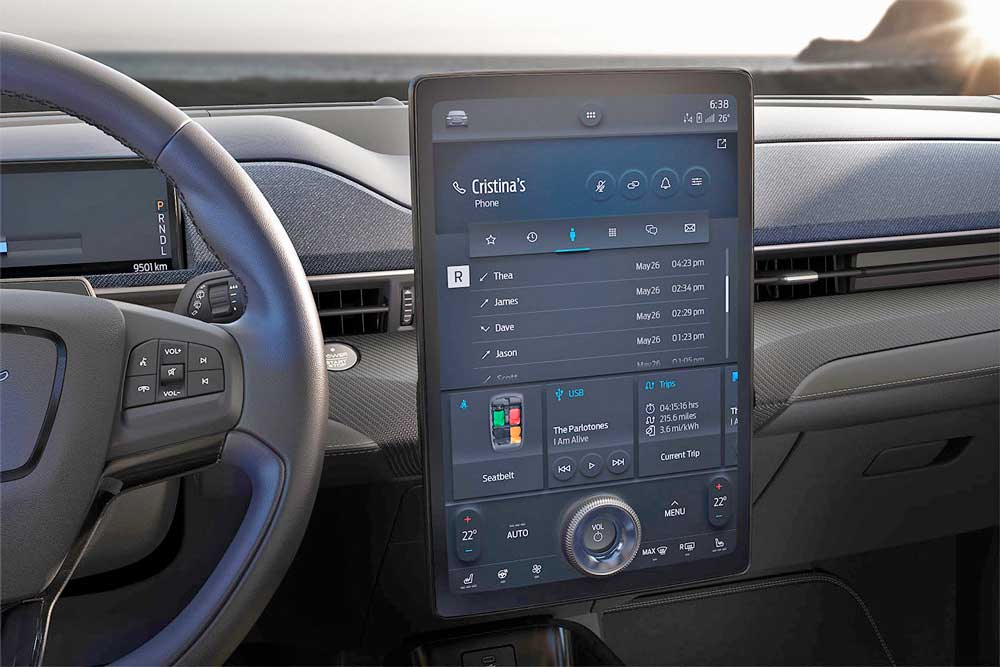 Although the Mustang Mach-E is a giant step forward in technology, Ford claims to have over 2,100 EV-certified dealerships and more than 3,500 EV-trained technicians nationwide to efficiently handle service and maintenance.

Drive Train: RWD and AWD – some trims available with either or, some with RWD only and some with AWD only.