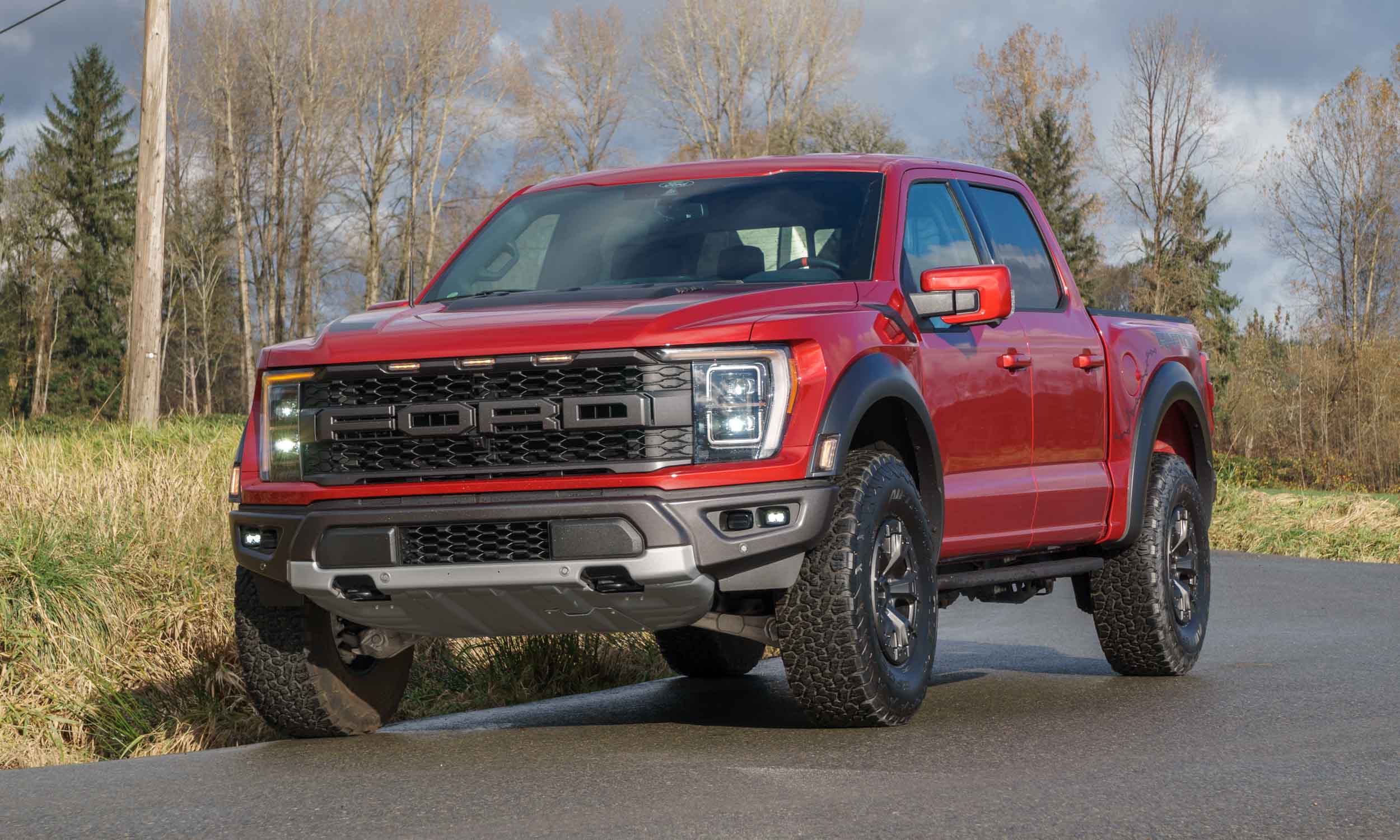 What Is It?
Last year Ford introduced a completely new F-150, and this year the company followed up with the most exciting version of this full-size pickup to date — the new F-150 Raptor. Designed for high-performance driving where the pavement ends, the 2021 Ford F-150 Raptor gets a powerful engine, off-road suspension, incredibly large tires and uniquely aggressive styling that matches the big truck’s performance. 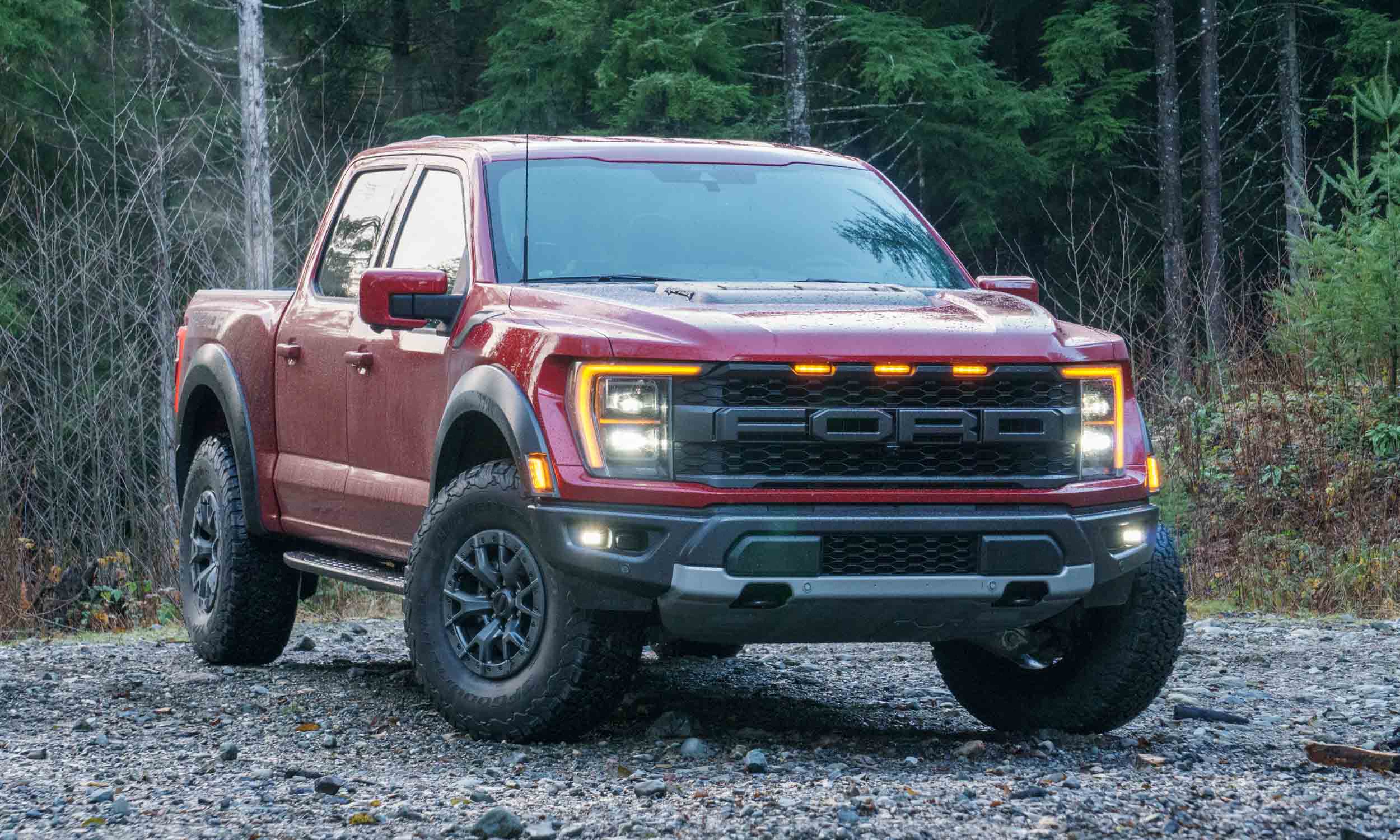 Test Vehicle
Ford provided us with a 2021 F-150 Raptor 4 x 4 SuperCrew painted in Rapid Red with a Rhapsody Blue interior. The Raptor came equipped with the Power Tech Package, a spray-in bedliner and the Raptor 37 Performance Package for a total MSRP of $82,475. Competitors to the 2022 Ford F-150 Raptor include the Ram 1500 TRX, Toyota Tundra TRD Pro, Nissan Titan Pro-4X, Chevrolet Silverado 1500 Trail Boss and GMC Sierra 1500 AT4. 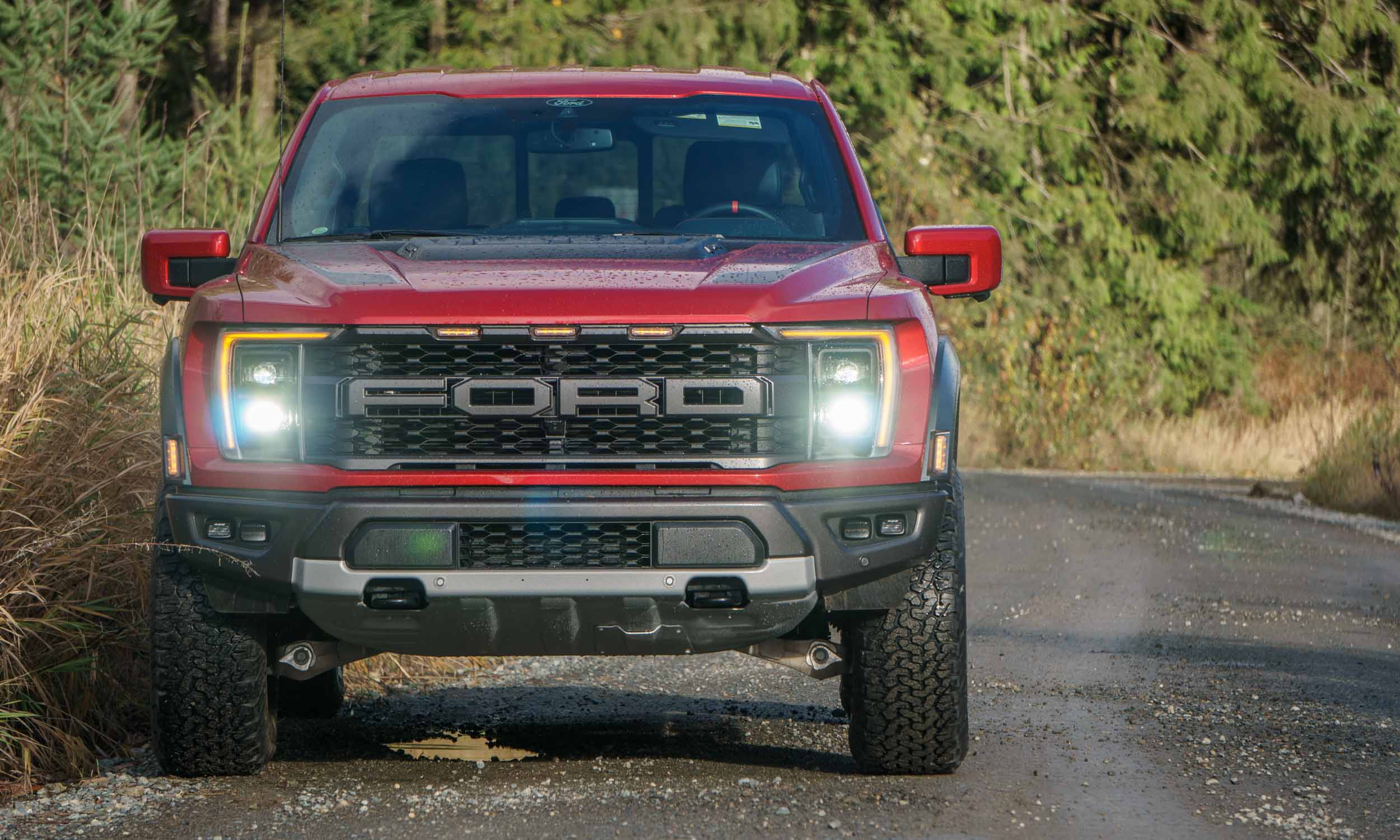 Raptor Styling
Raptor gets an all-new look for 2021 and, like past versions, it easily stands out from the standard F-150. Most noticeable is the wide, blacked-out grille emblazoned with FORD in large letters across the center. With amber LED marker lights across the top of the grille and LED running lights surrounding the headlights, the all-new Raptor looks meaner than the outgoing version. 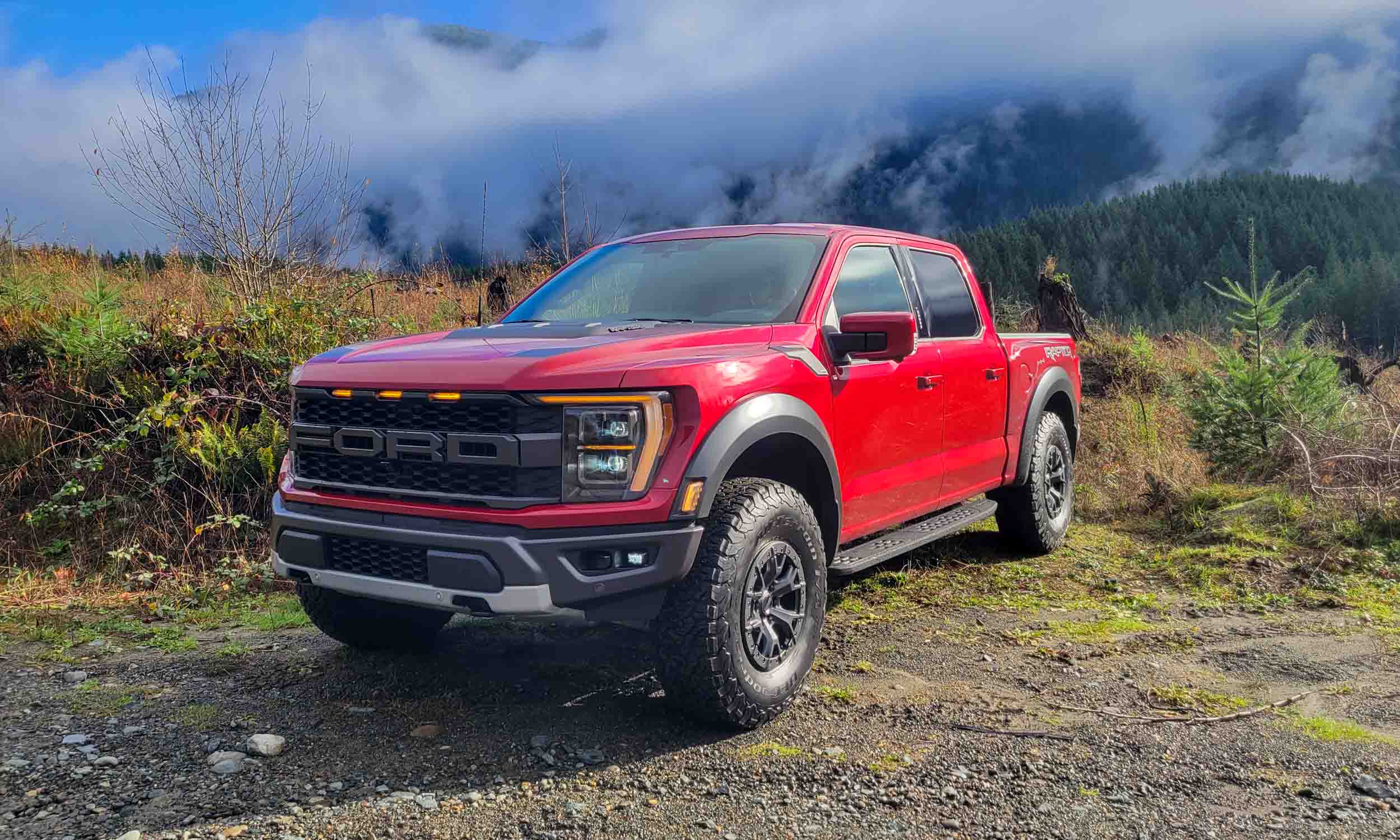 Bold Looks
The power dome hood of the 2021 Ford Raptor features a new heat extractor with functional side vents at the top of the fenders; the automaker says the hood draws inspiration from the Raptor’s namesake the F-22 Raptor fighter jet. A wider front skidplate provides increased protection while giving the new Raptor a more aggressive stance. The Raptor is about six inches wider than the standard F-150. 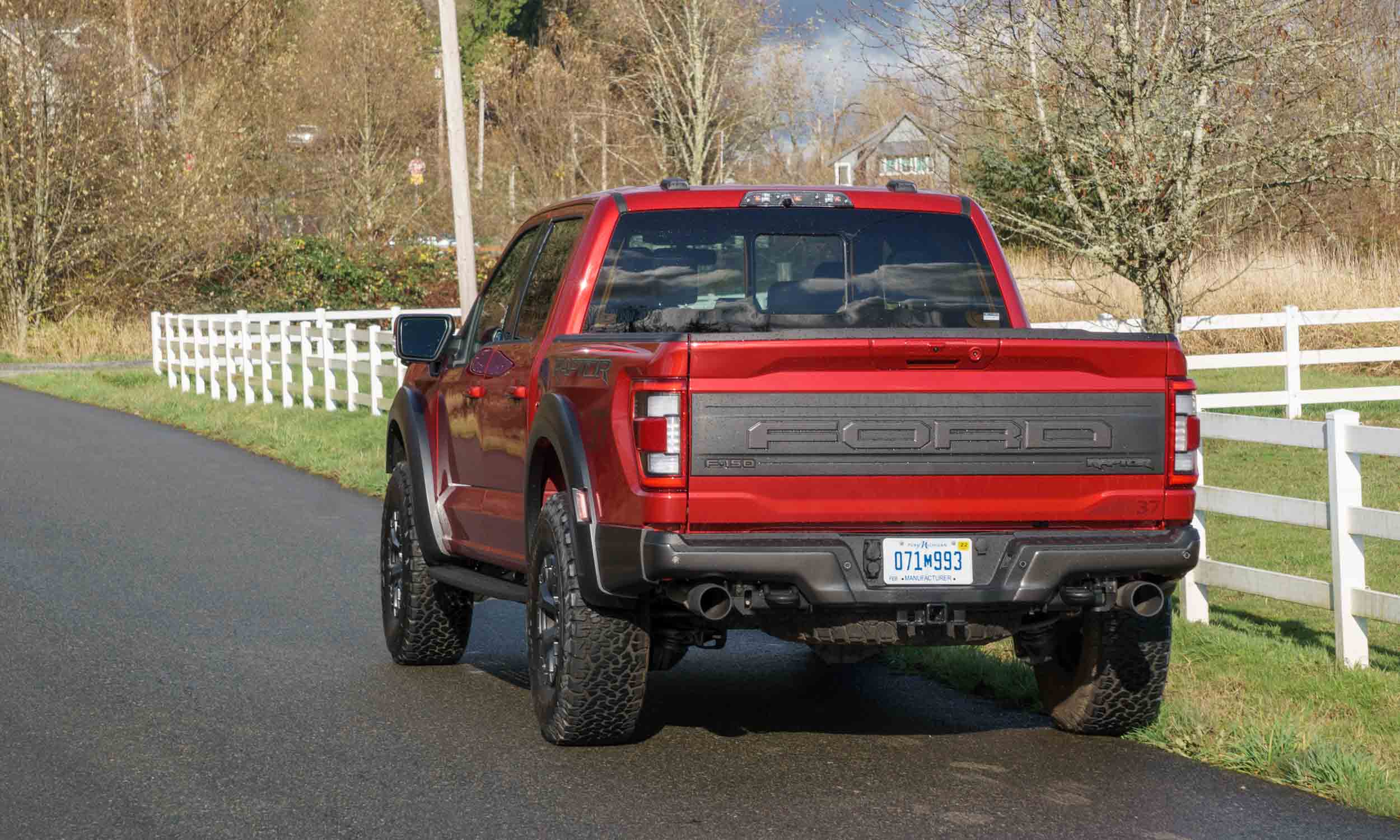 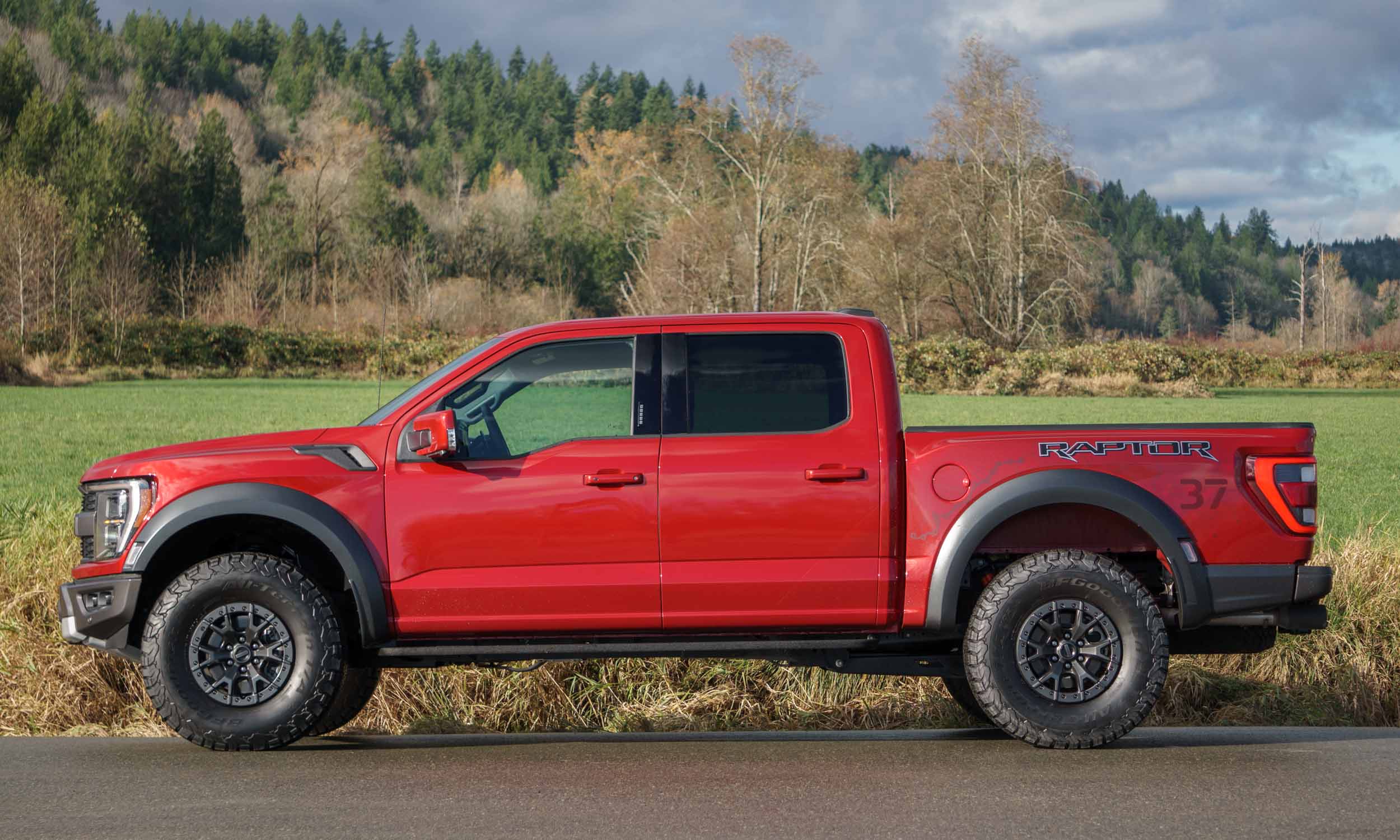 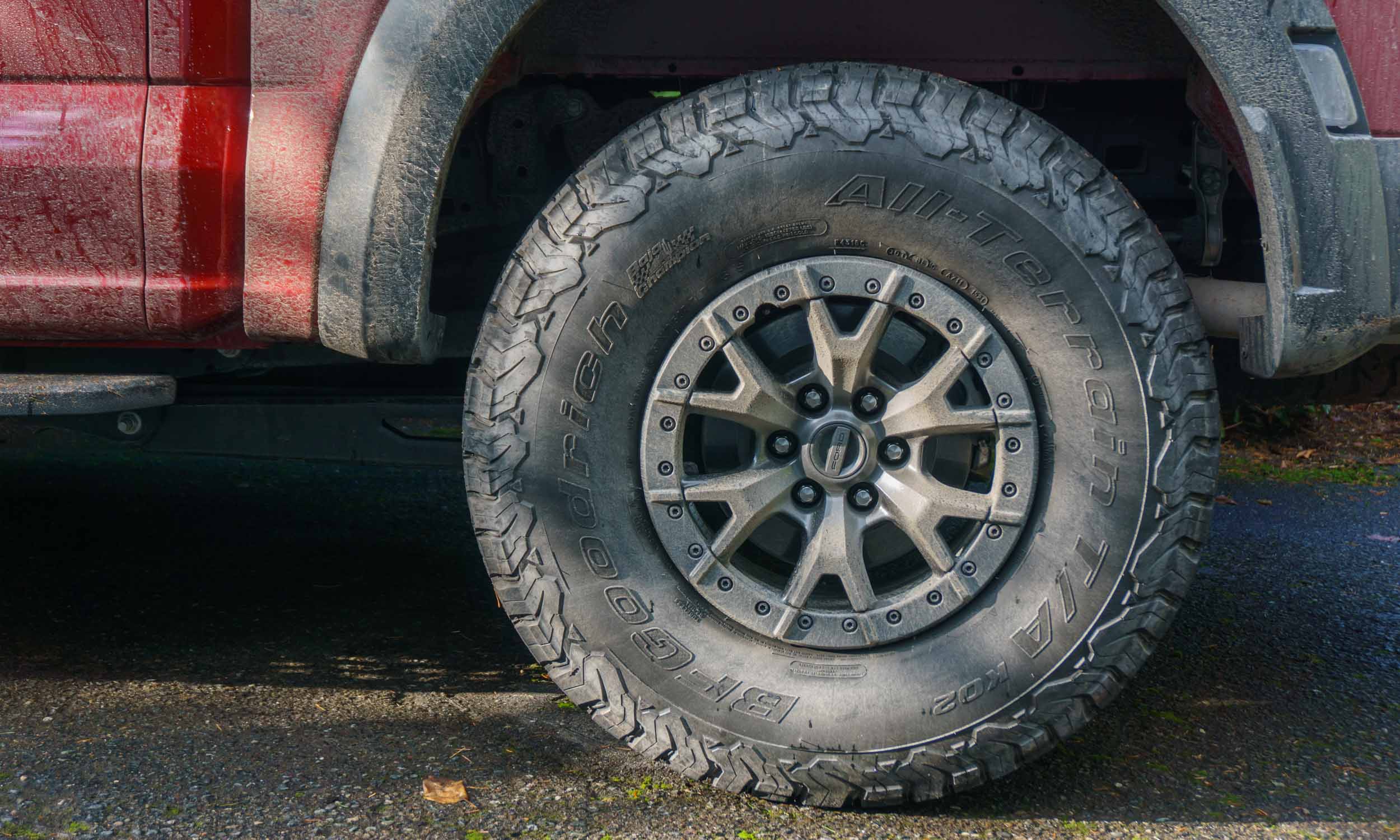 Big Tires
The tester F-150 Raptor came equipped with optional 37-inch tires — the largest tires ever factory-installed on a full-size production pickup truck. The tires are BF Goodrich all-terrain T/A KO2 meats — with the larger tires, ground clearance bumps up to 13.1 inches with 33.1-degree approach and 24.9-degree departure angles. Improved wheel travel bolsters this big truck’s capability, with 14 inches of travel up front and 15 inches at the rear — a 25 percent increase versus the first-gen Raptor. 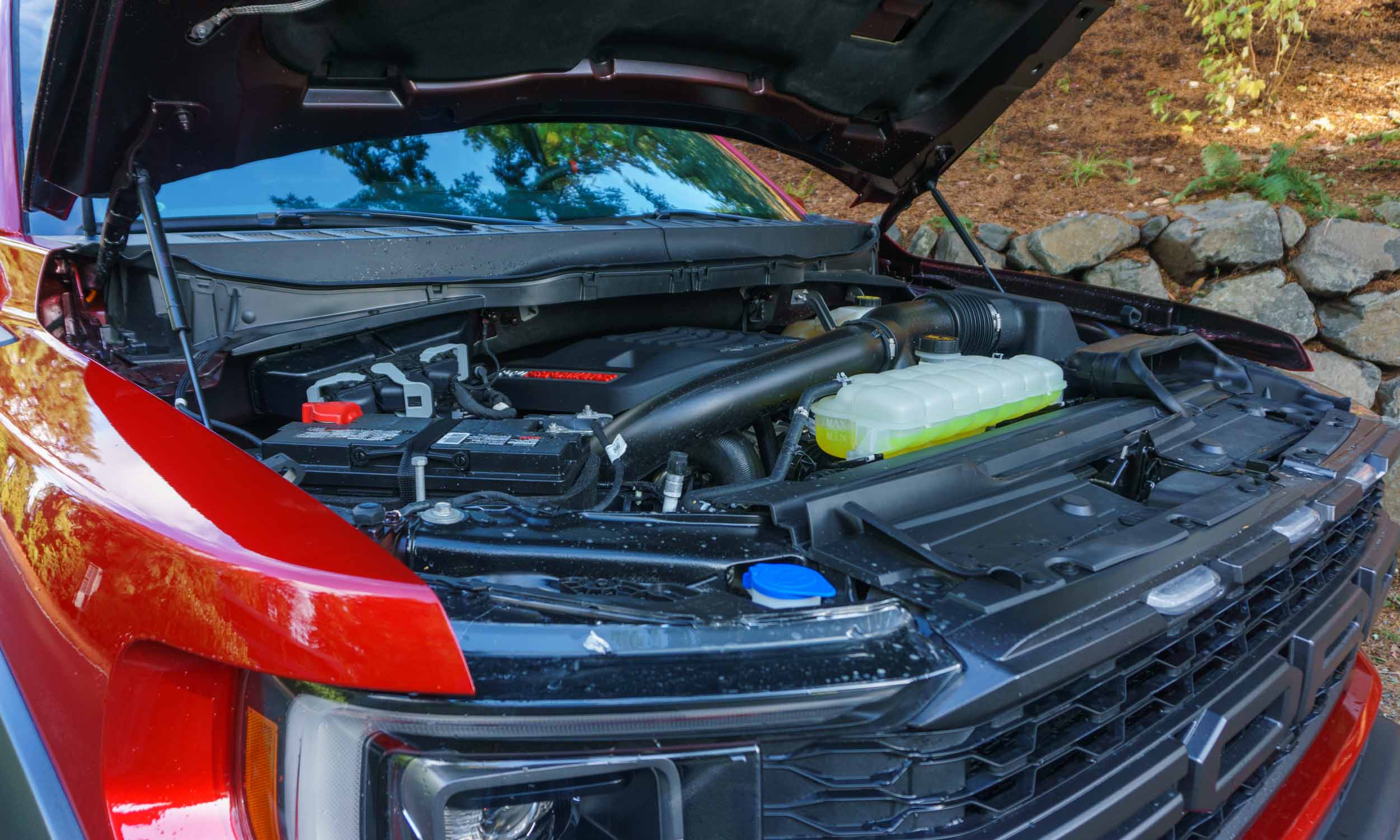 Under the Hood
Powering the 2021 F-150 Raptor is a next-generation 3.5-liter twin-turbo EcoBoost high-output V6 engine producing 400 horsepower and 500 lb-ft of torque. Power gets delivered to the massive wheels via a 10-speed automatic transmission. Maximum payload has been increased to 1,400 pounds, while towing bumps up to an impressive 8,200 pounds. The V6 generates plenty of power, so this Raptor is certainly never lacking motivation, but we do miss the sound of a big V8 engine emanating from beneath the hood. Granted, the Raptor’s exhaust note sounds fine with the EcoBoost, but it’s simply not the same aural experience. 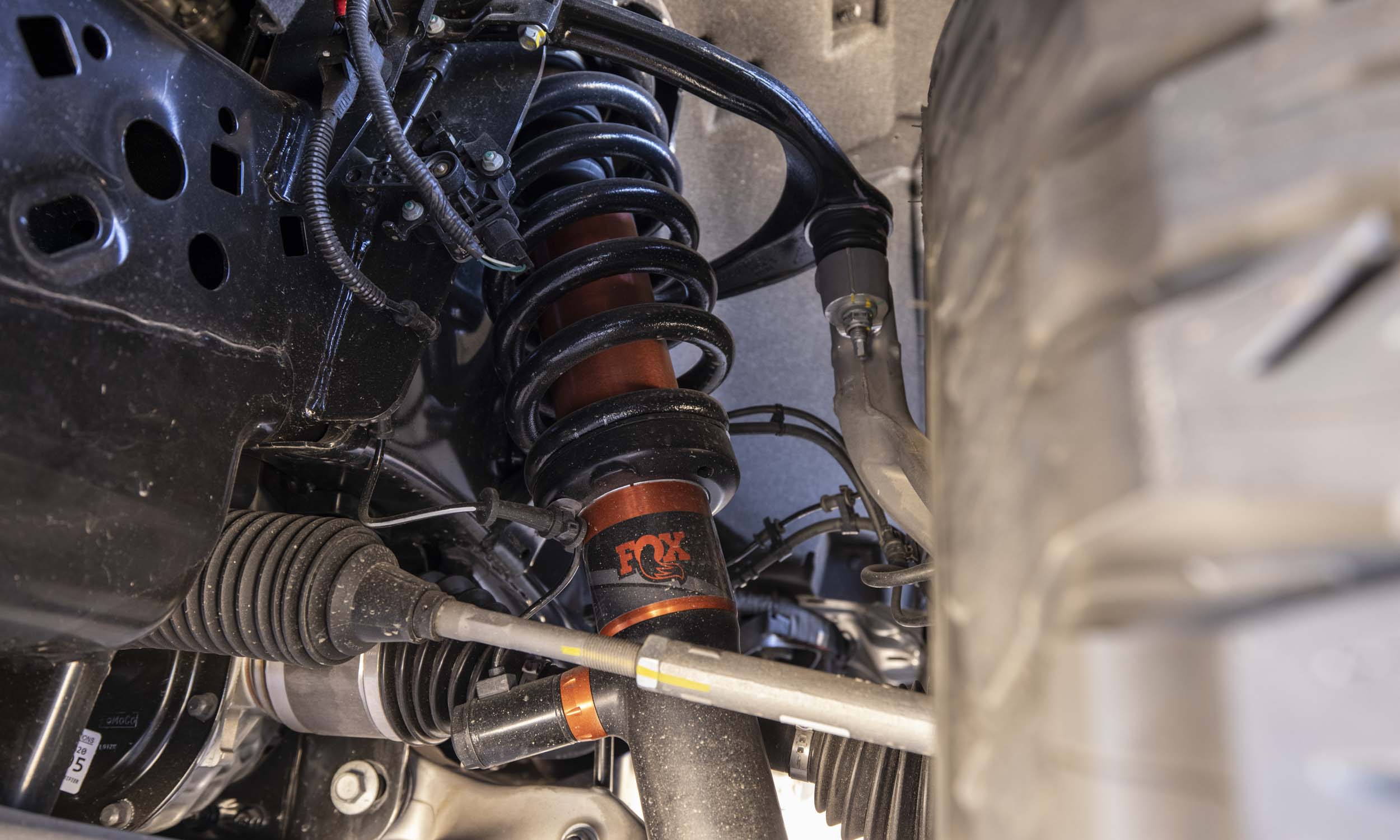 Off-Road Suspension
In terms of suspension, the next-generation Fox Live Valve shocks are the largest suspenders a Raptor has ever worn, designed to react faster to terrain changes. The 3.1-inch-diameter shocks are filled with an all-new, low-friction shock fluid for improved on- and off-road drivability. Based on sensor input from around the truck, the damping rates can adjust up to 500 times per second while providing upwards of 1,000 pounds of damping at each corner. Raptor also gets a new five-link rear suspension with extra-long trailing arms and 24-inch coil springs. This new suspension system is designed to work in tandem with the EcoBoost engine management software to provide better comfort, stability and traction at high speeds, while simultaneously allowing the big truck to put more power to the rear wheels for quicker launches off the line. 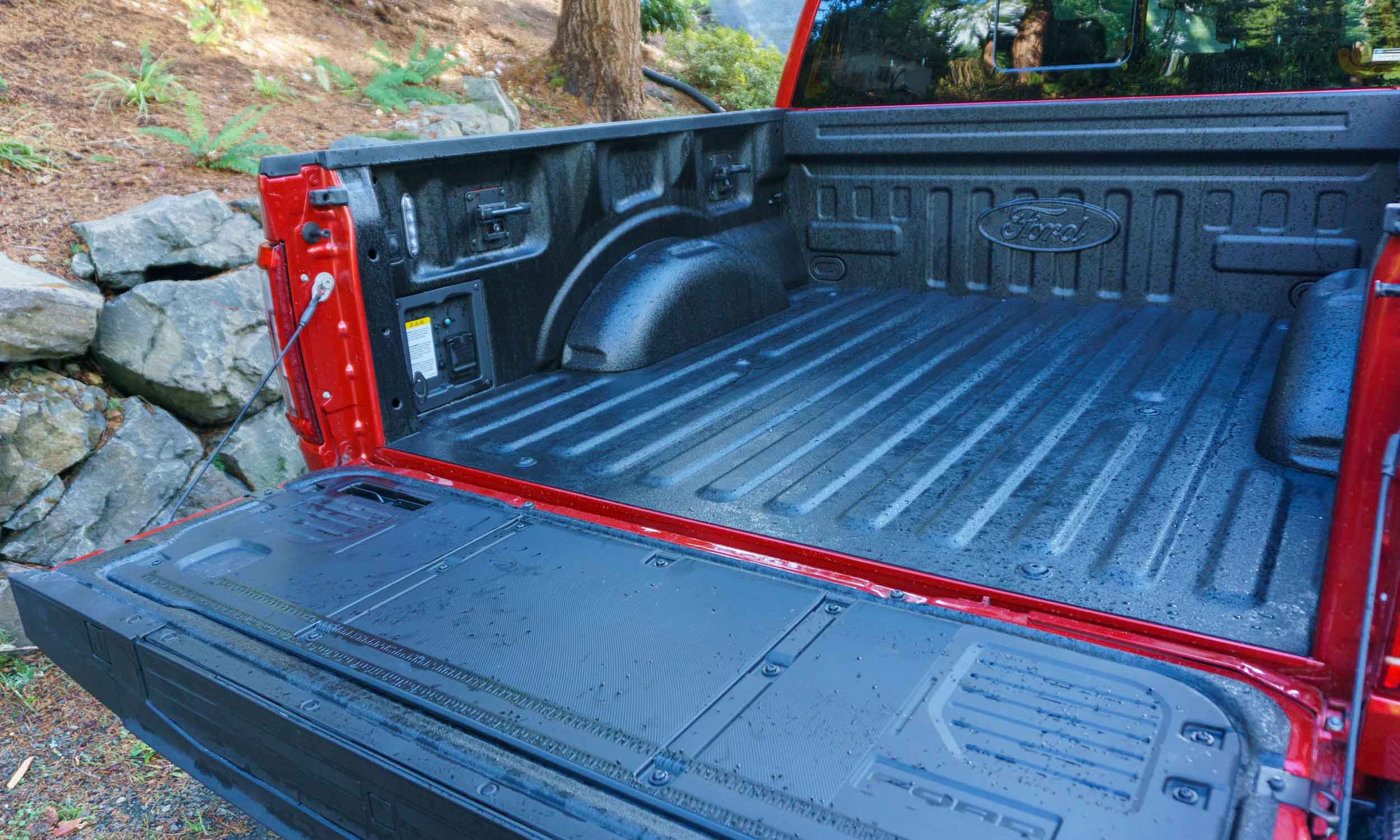 Onboard Power
The 2021 Ford F-150 Raptor has the ability to leave civilization far behind; however, the truck can also deliver up to 2.0 kilowatts of power for tools, toys, lights or whatever else needs to be juiced up. The Pro Power Onboard feature lets the truck operate as a mobile generator; Raptor has outlets in the cabin as well as the truck bed. 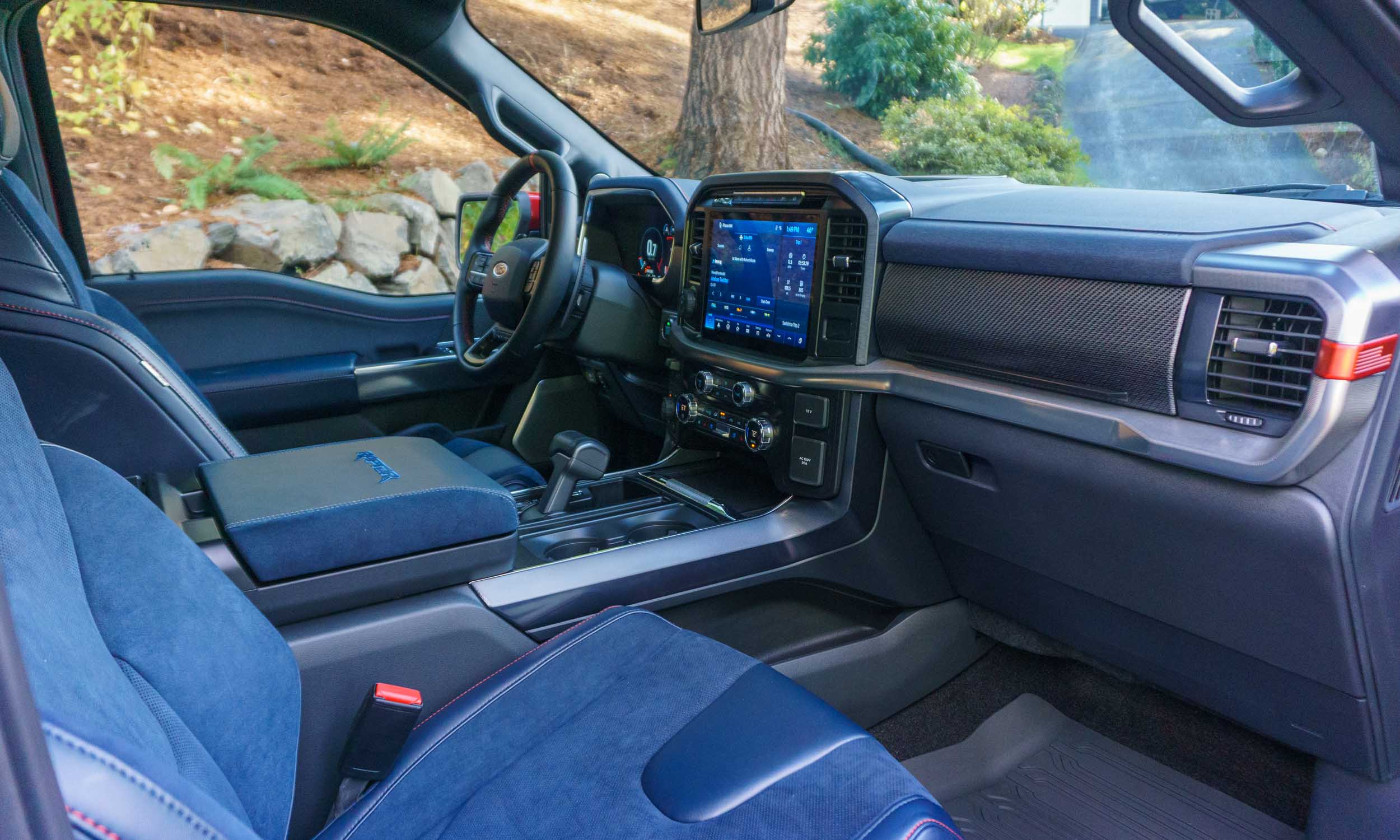 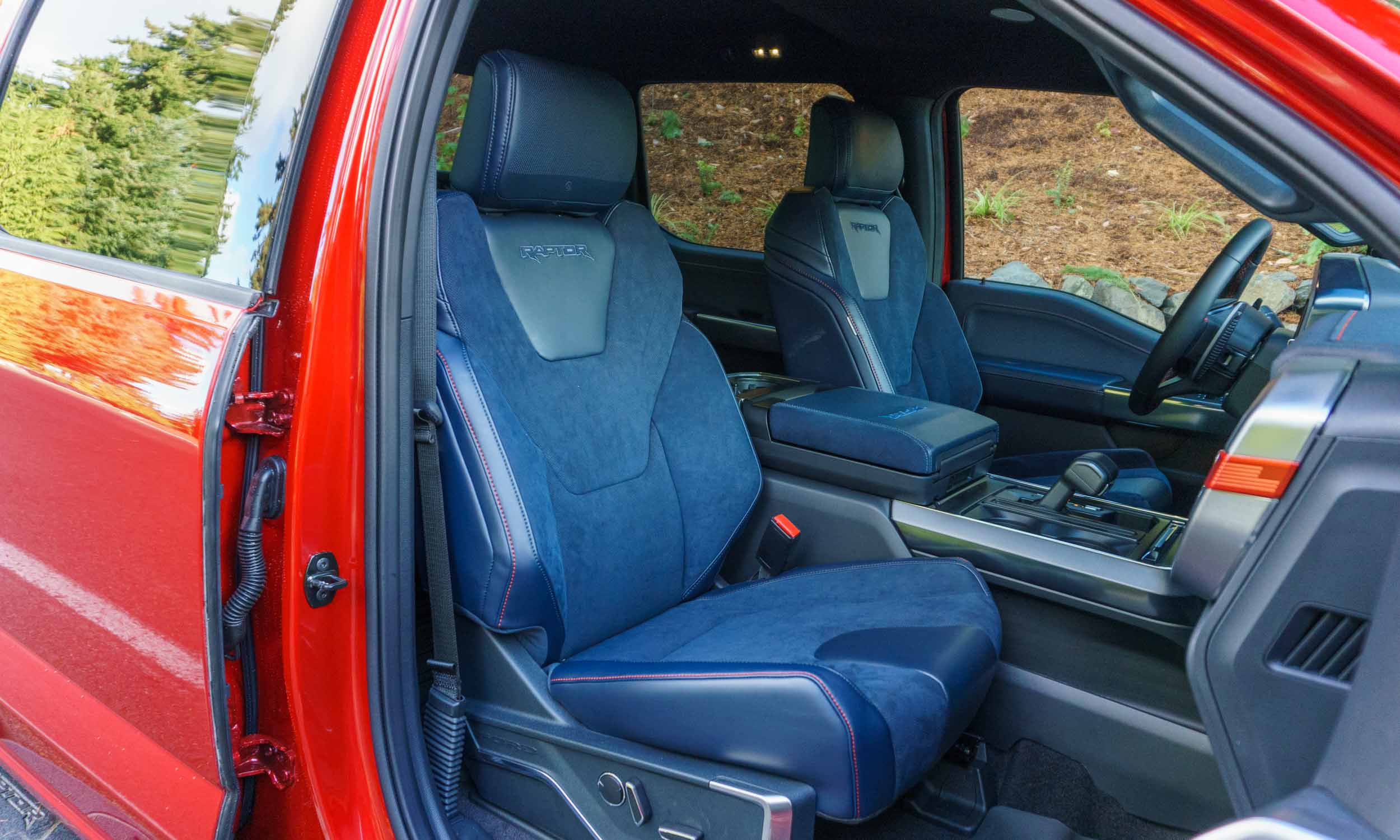 Front Seats
As part of the Raptor 37 Performance Package, the truck delivered to us came with Recaro sport seats trimmed in Rhapsody Blue leather and soft Alcantara suede with contrasting red stitching. The seats offer decent support and comfort, even when this massive truck is bombing down forest roads at speed. The seats also have heating and cooling capability as well as power adjustments. 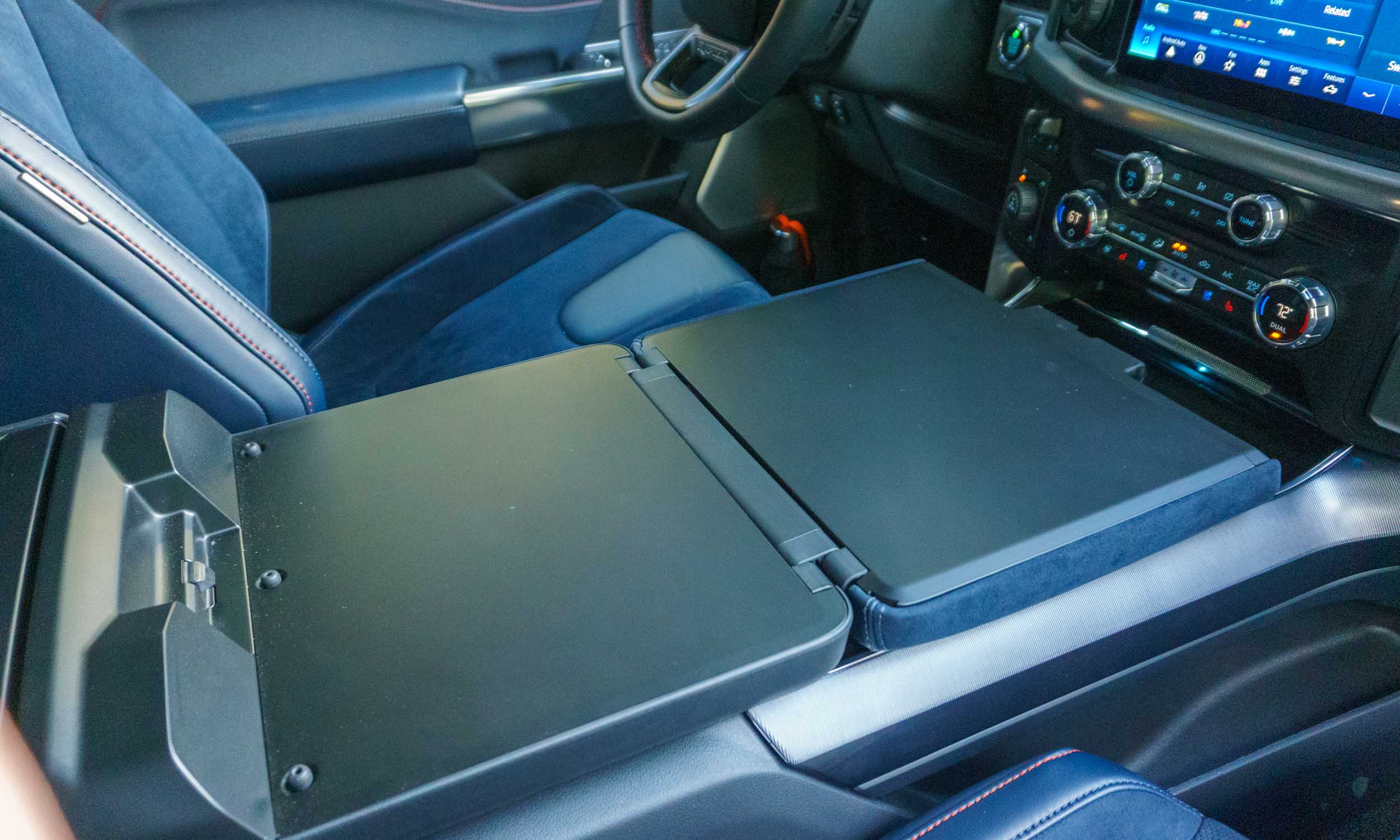 Work Space
One of our favorite features in Ford’s new F-150 is a fold-out workspace between the front seats. Pushing a button next to the gearshift lowers it into the console, creating space so the top of the center storage bin can be unfolded to form a large, flat work surface — or lunch surface. And with the Raptor’s onboard generator, no laptops will ever run low on power. 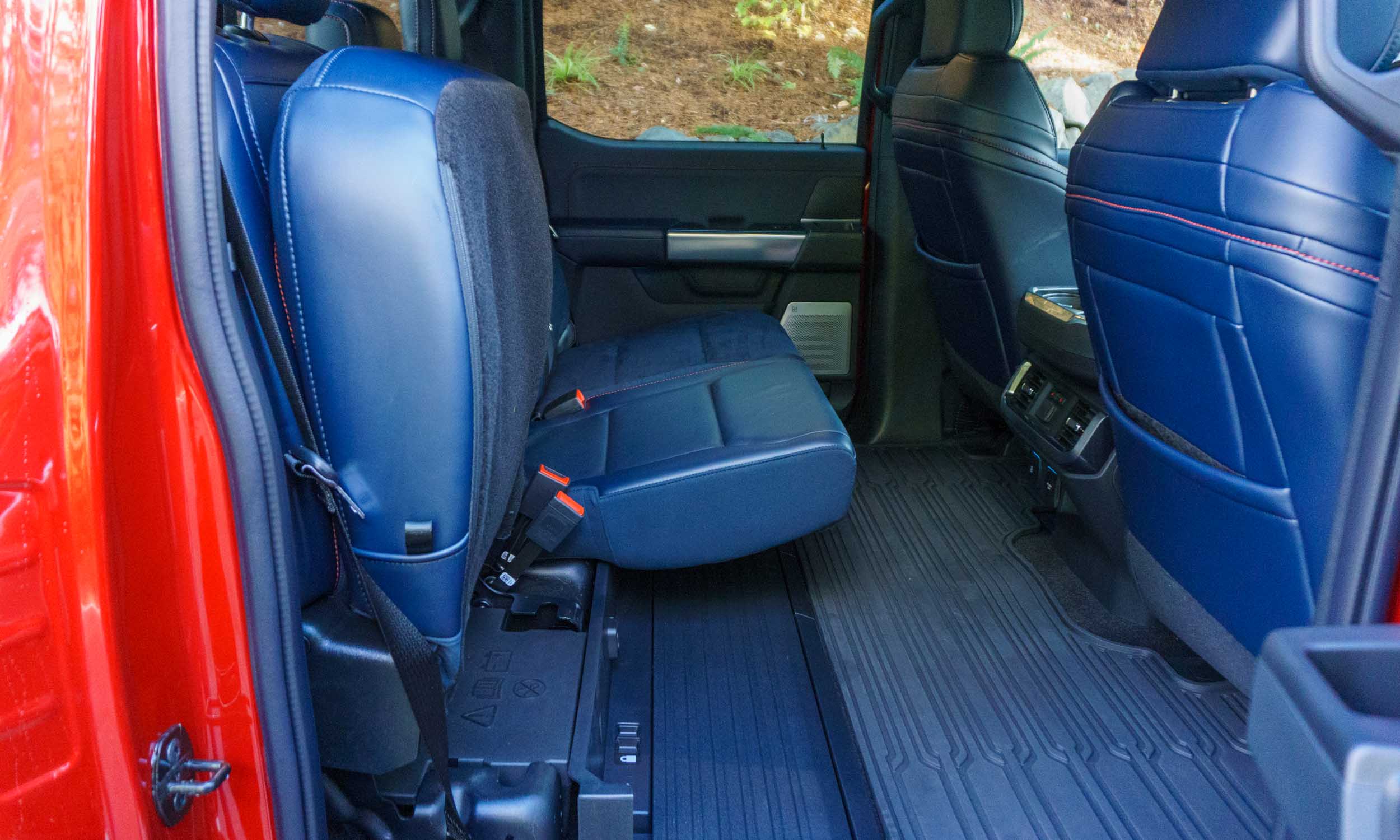 Rear Seat
As we’ve seen in other versions of the new F-150, the crew cab rear seat is spacious enough to easily handle three passengers or a significant amount of cargo. Seat bottoms fold up to create a flat floor space, or a storage box can be unfolded from the floor for items that need better security. Rear-seat occupants also get heated seats as well as USB ports and 110-volt power outlets. 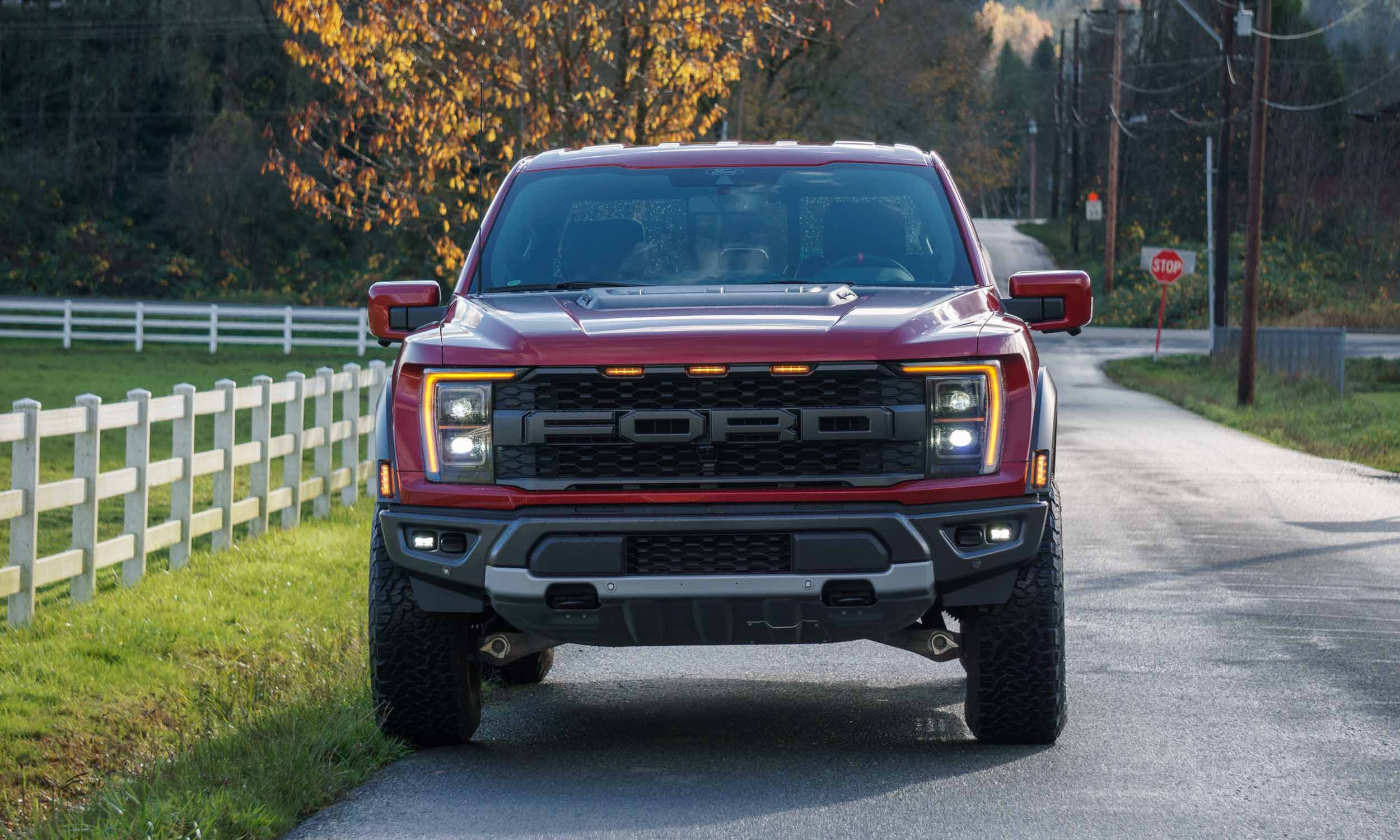 On the Road
We expected the new Raptor would be a rough rider for everyday driving, but were pleasantly surprised to find that even with the massive off-road tires the truck remains comfortable and docile on road. Cruising the highway is a smooth experience, and there’s plenty of power on tap so acceleration is always strong (the Raptor’s handling is about as good as one would expect from a full-size pickup truck). Hitting the 4A (automatic four-wheel drive) button provides needed traction when roads are wet and slick. Raptor drivers will soon discover there’s no need to slow for speed bumps — the truck simply swallows big bumps while occupants remain undisturbed. 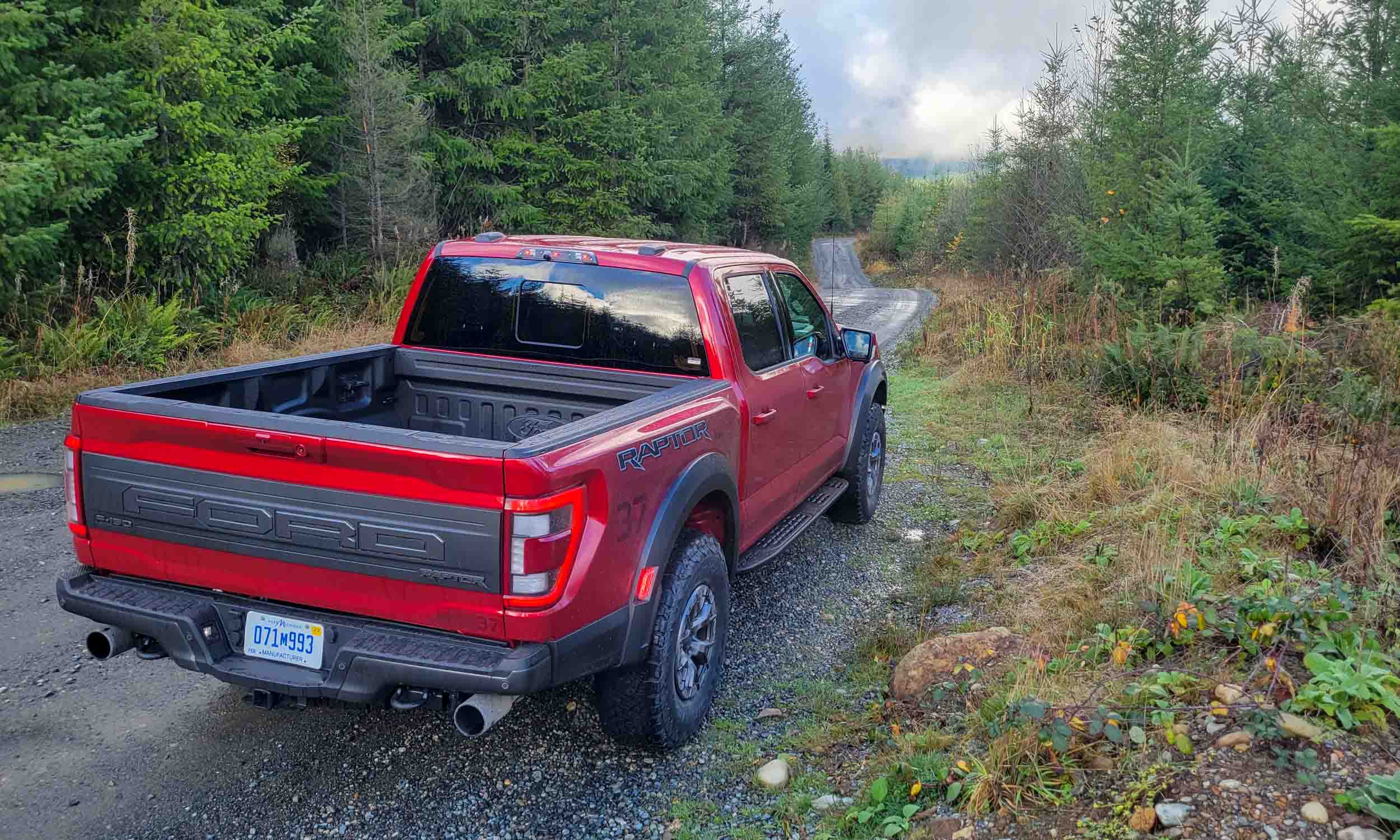 Off-Road
The 2021 Ford F-150 Raptor is capable of handling practically any terrain or road condition without any difficulty. Although we didn’t challenge its off-road prowess, we did fly the Raptor down some washed-out forest roads near North Bend, Washington. With large water-filled holes, loose gravel and mud to navigate, the Raptor dealt with rough road conditions at high speeds with ease. The big tires and tall ground clearance eliminate any worry about causing damage to the truck’s undercarriage, while the suspension maintains the aforementioned smooth, confident ride. 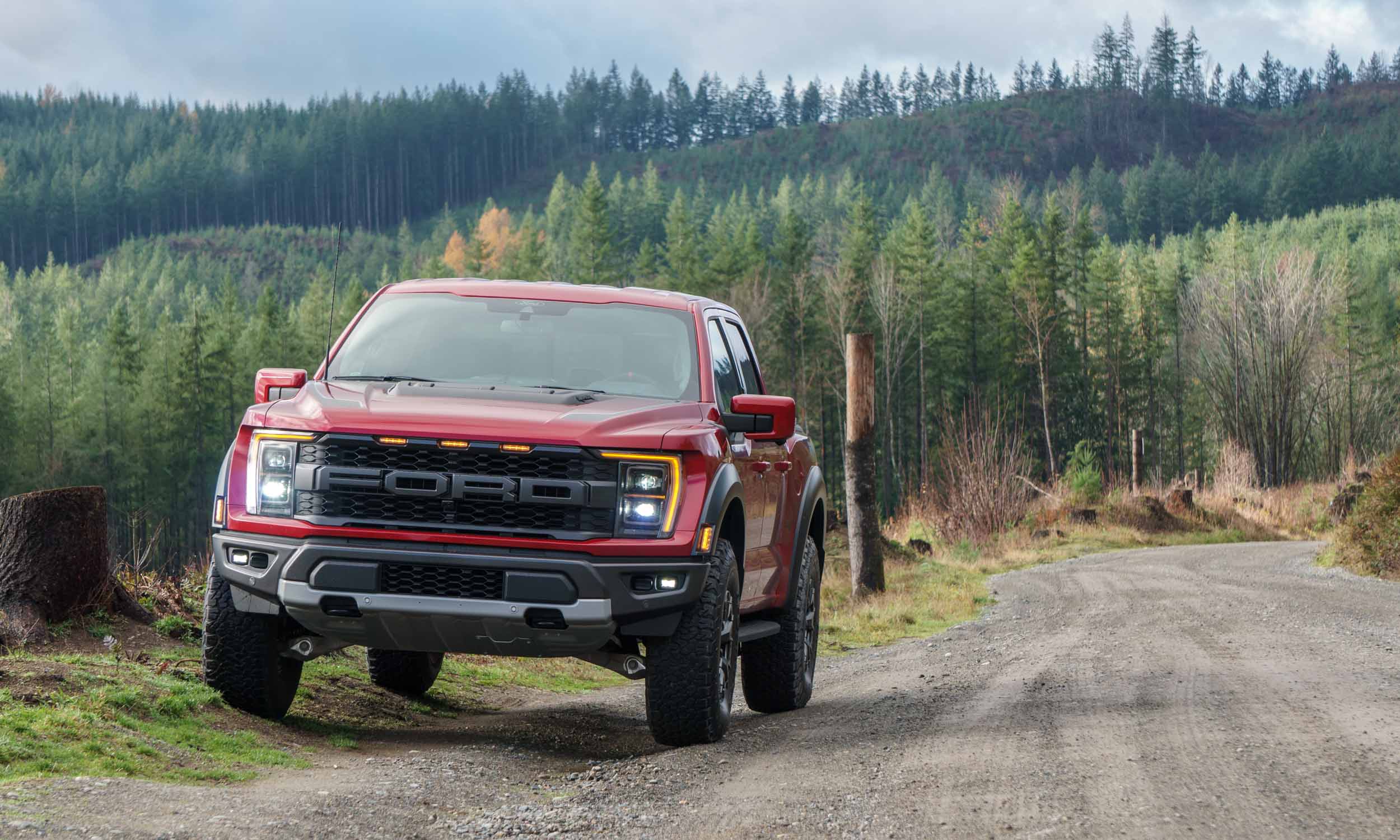 Rating: 9.0
The new Ford F-150 has already earned our respect as one of the best new trucks on the market. And now the F-150 Raptor circles to loftier levels thanks to standout styling and a beautiful, comfortable, and high-tech interior. The Raptor’s powerful EcoBoost engine and impressive off-road capability combine with the responsive ride required of a daily driver, making this one of the most entertaining and enjoyable versions of the new F-150. 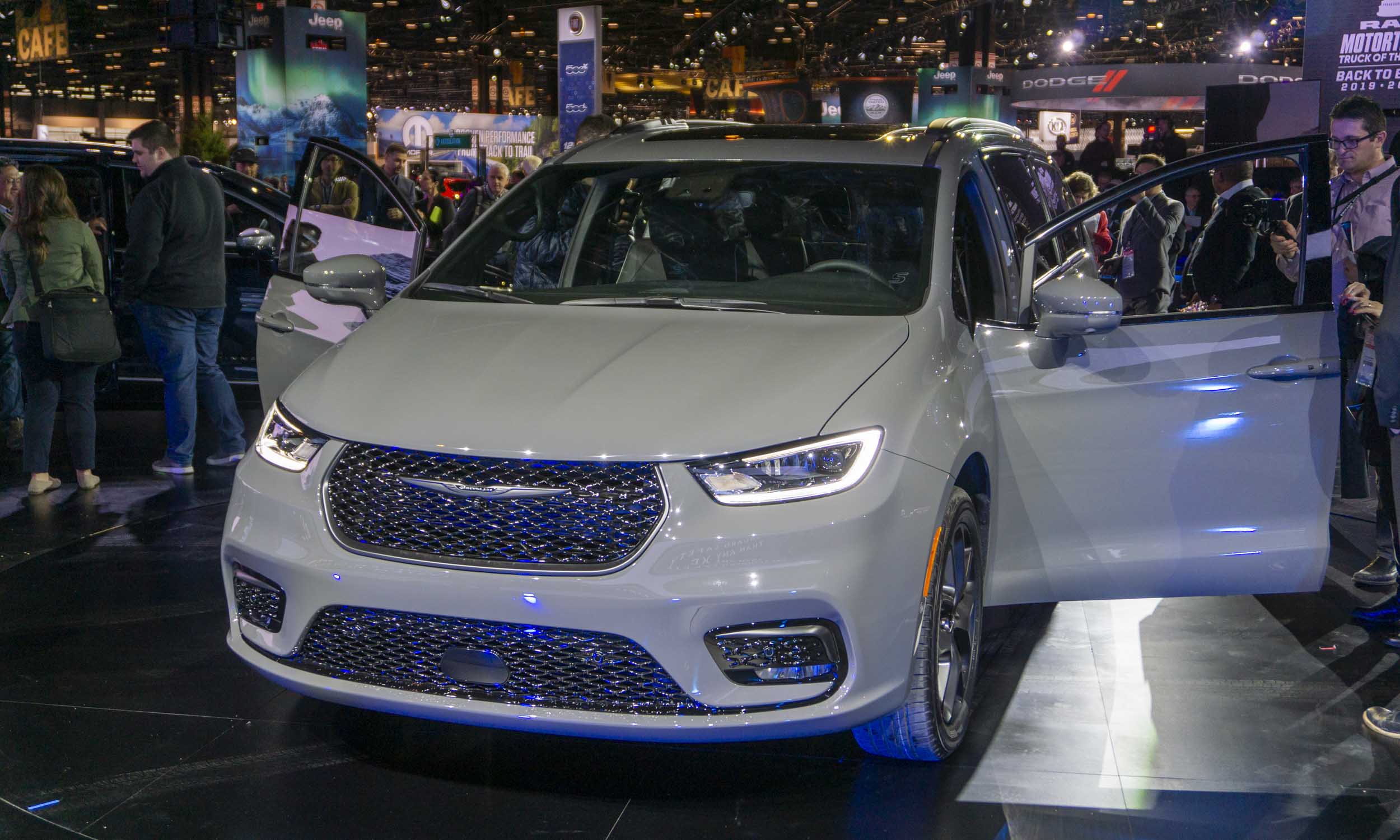 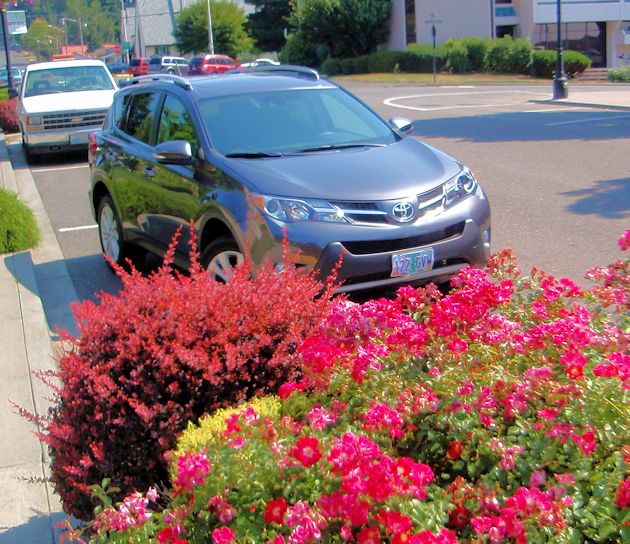