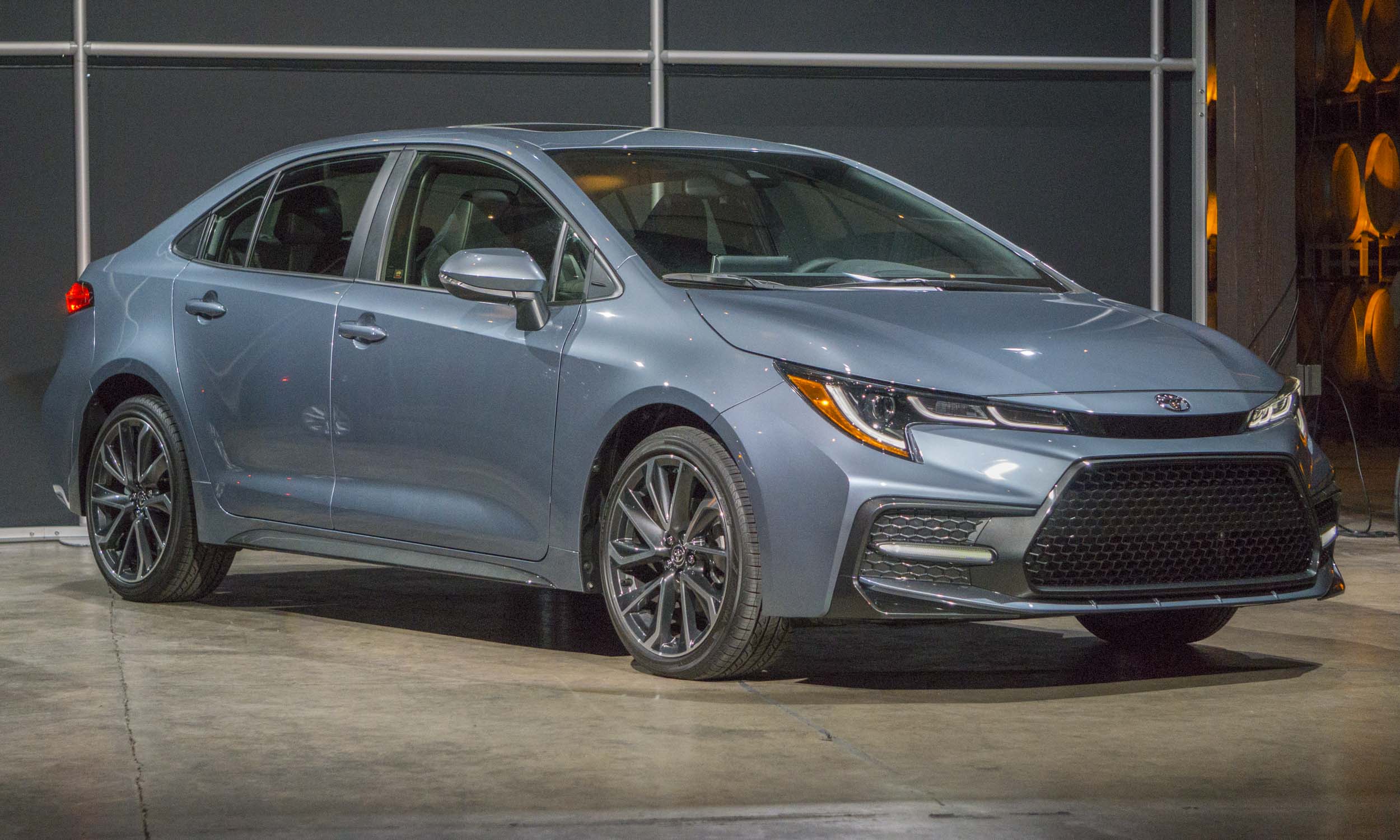 All New
If it seems like the Toyota Corolla has been around forever, that?s because it is one of the longest-running model lines in the automotive world. More than 46 million Corollas have sold worldwide since its introduction more than 50 years ago, and the automaker expects the small car?s popularity to continue ? and ideally grow ? with the introduction of the 12th generation sedan. Toyota gave us a sneak peek at the 2020 Corolla prior to its world debut during the 2018 Los Angeles Auto Show at the end of November. 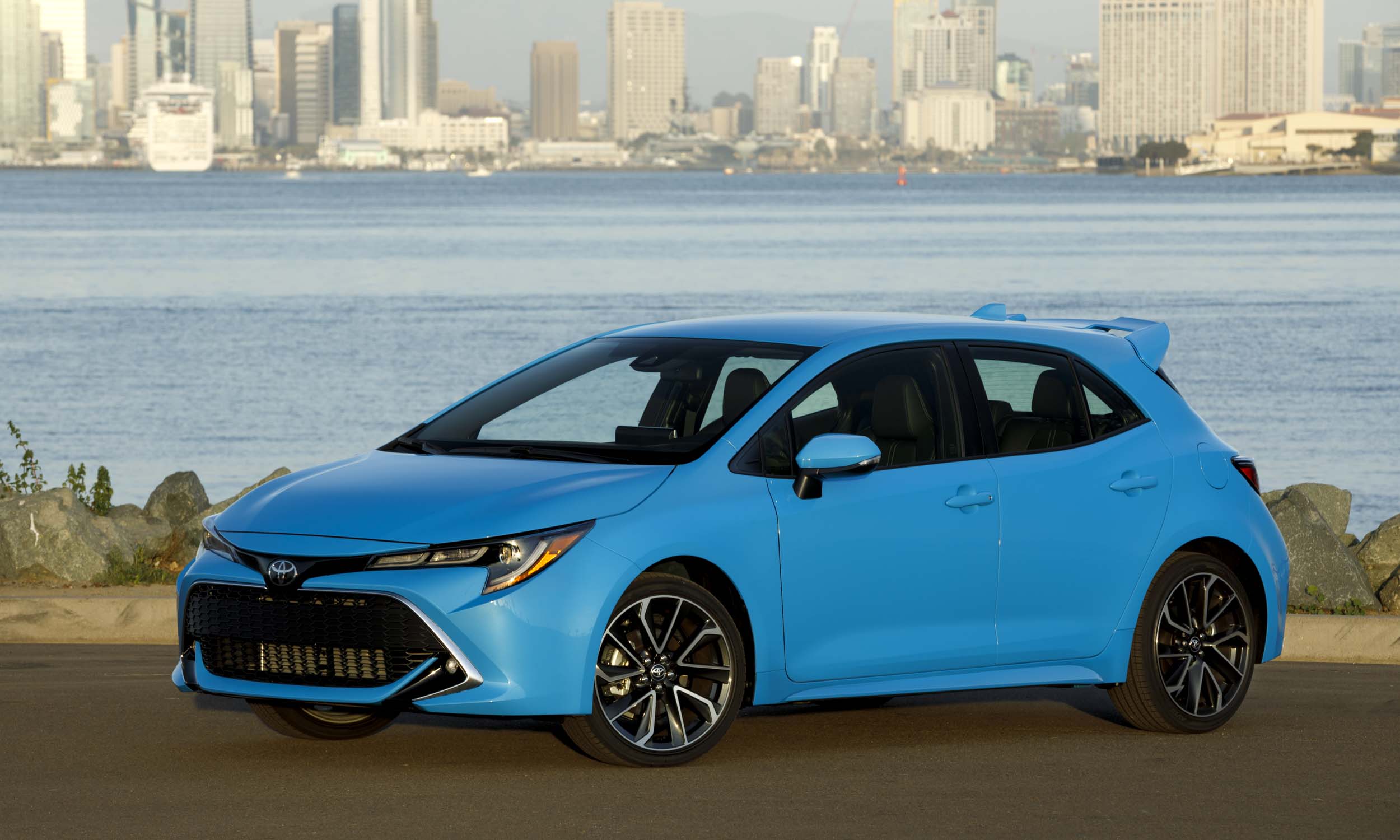 New Global Architecture
The new Corolla sedan will join the all-new Corolla Hatchback introduced earlier this year. Both models are based on the Toyota New Global Architecture, which represents how Toyota builds new vehicles with regard to engineering, structure, chassis, materials and design. The result is a vehicle possessing modern styling, the latest safety features, as well as better performance and improve fuel efficiency. 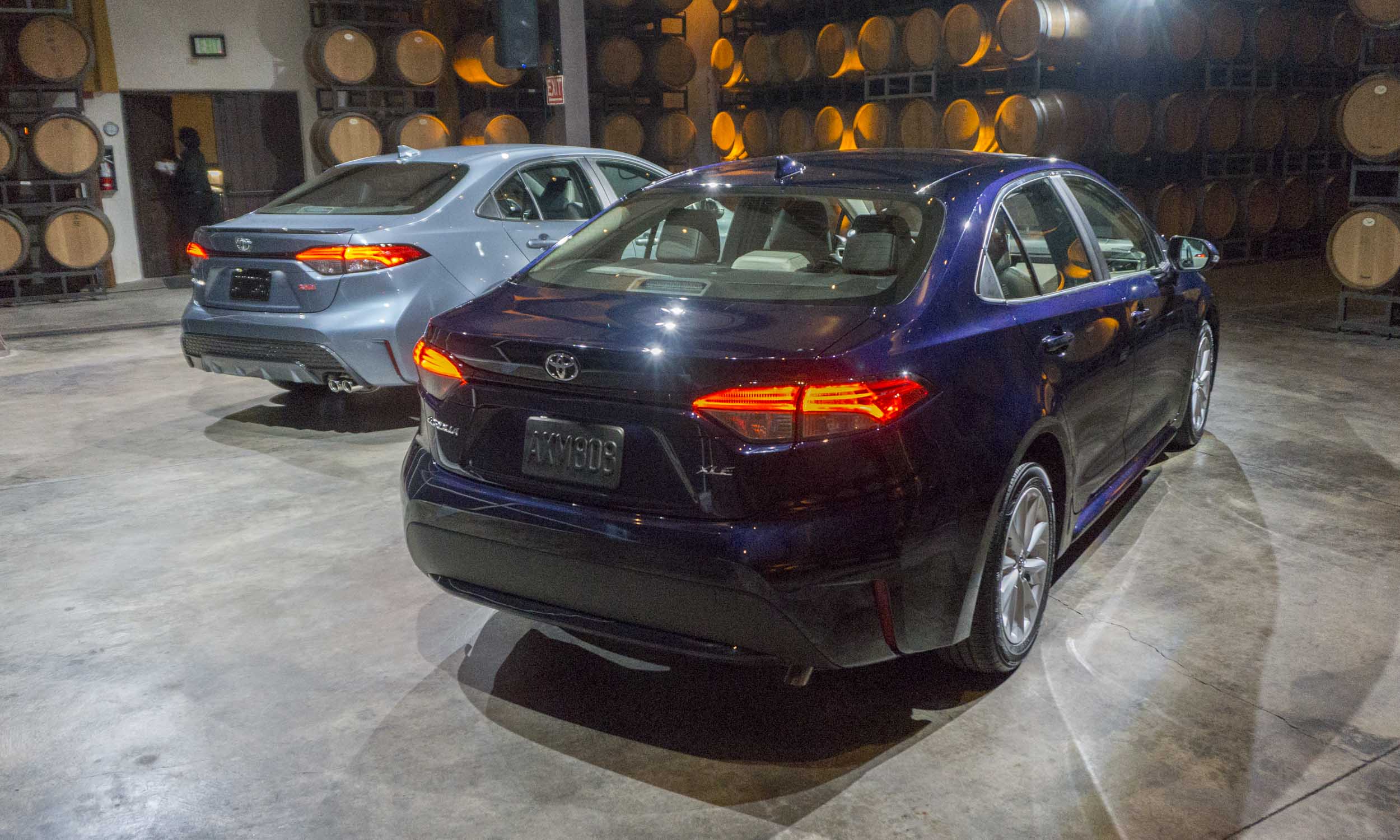 Trim Levels
The Corolla sedan will be available in five trims: L, LE, XLE, SE and XSE. The SE and XSE will lean toward a sportier look with a sport-tuned suspension, while LE and XLE are designed as a more refined offering. 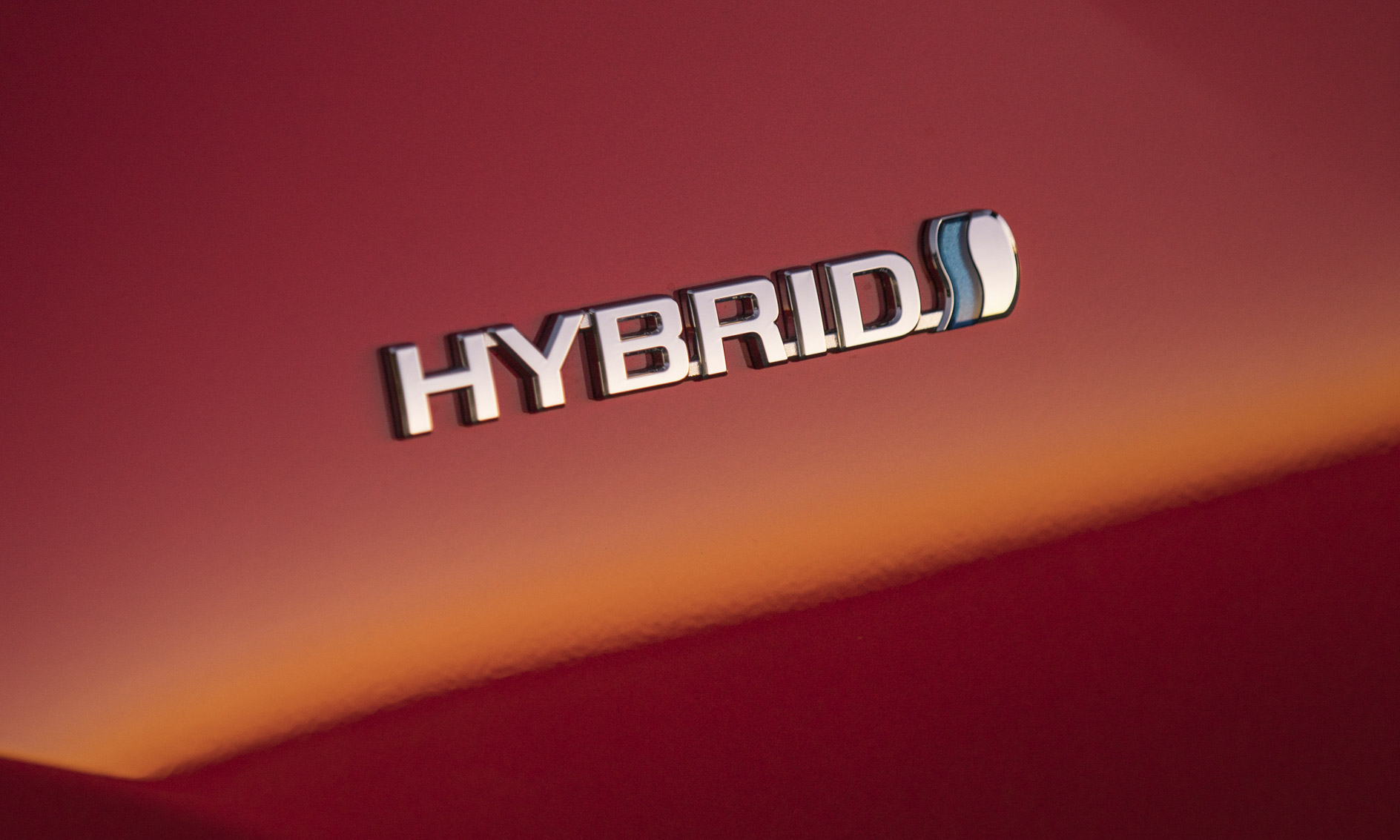 Hybrid
Toyota also announced there will be a hybrid version of the new Corolla ? which is a first for the model line. No details about the Corolla Hybrid have been released yet, so stay tuned for additional news to be released during press preview days at the upcoming 2018 Los Angeles Auto Show. 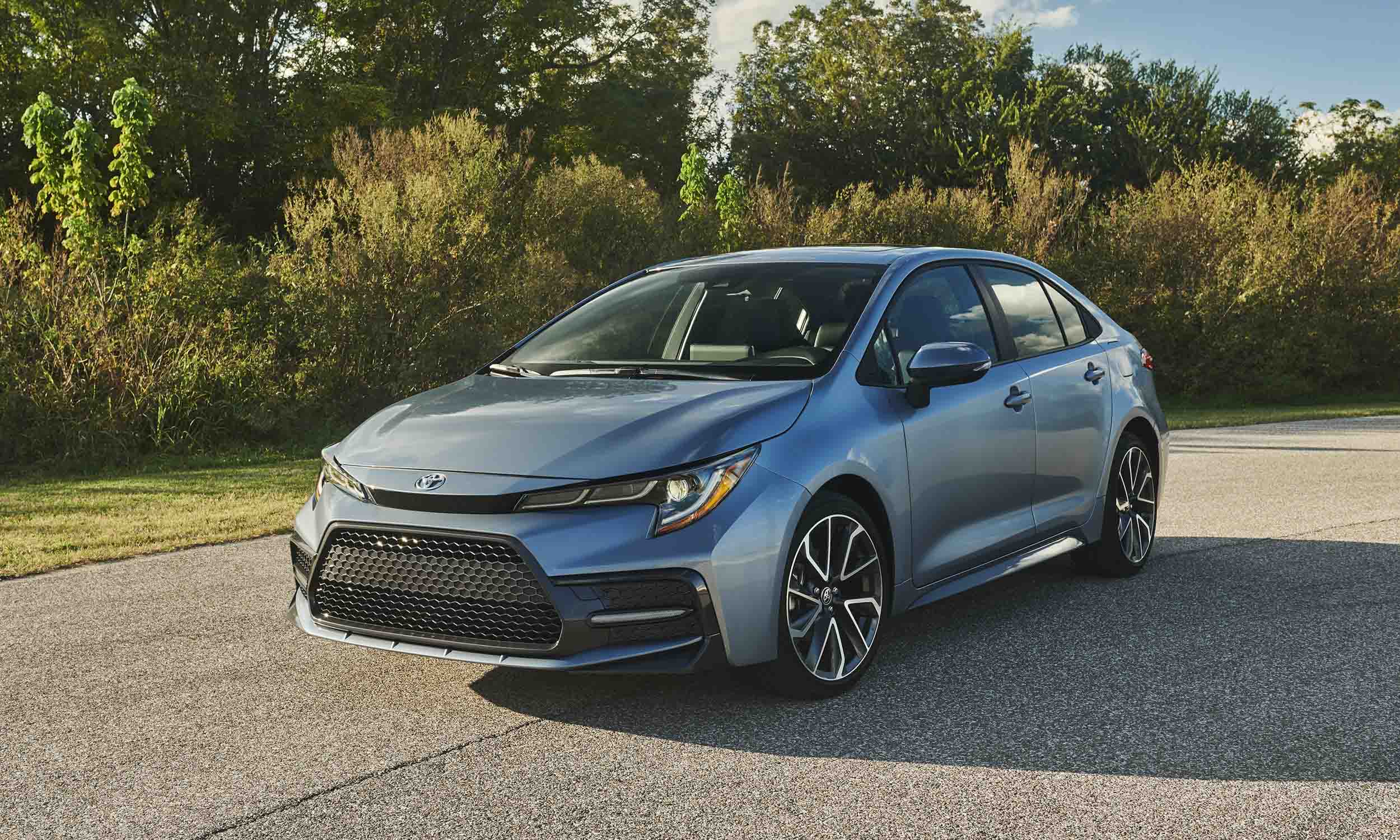 Exterior Styling
While the 2020 Corolla is updated throughout, the most noticeable changes can be seen in the exterior design. It may not be a performance car, but the new Corolla is trying to look the part with a lower, wider stance. Corolla?s wheelbase remains the same as the outgoing version; however, the track is wider in both front and back, and front overhang has been lessened by 1.3 inches. The hood has also been lowered, which not only gives the car a sleeker look, it also provides better visibility for the driver. 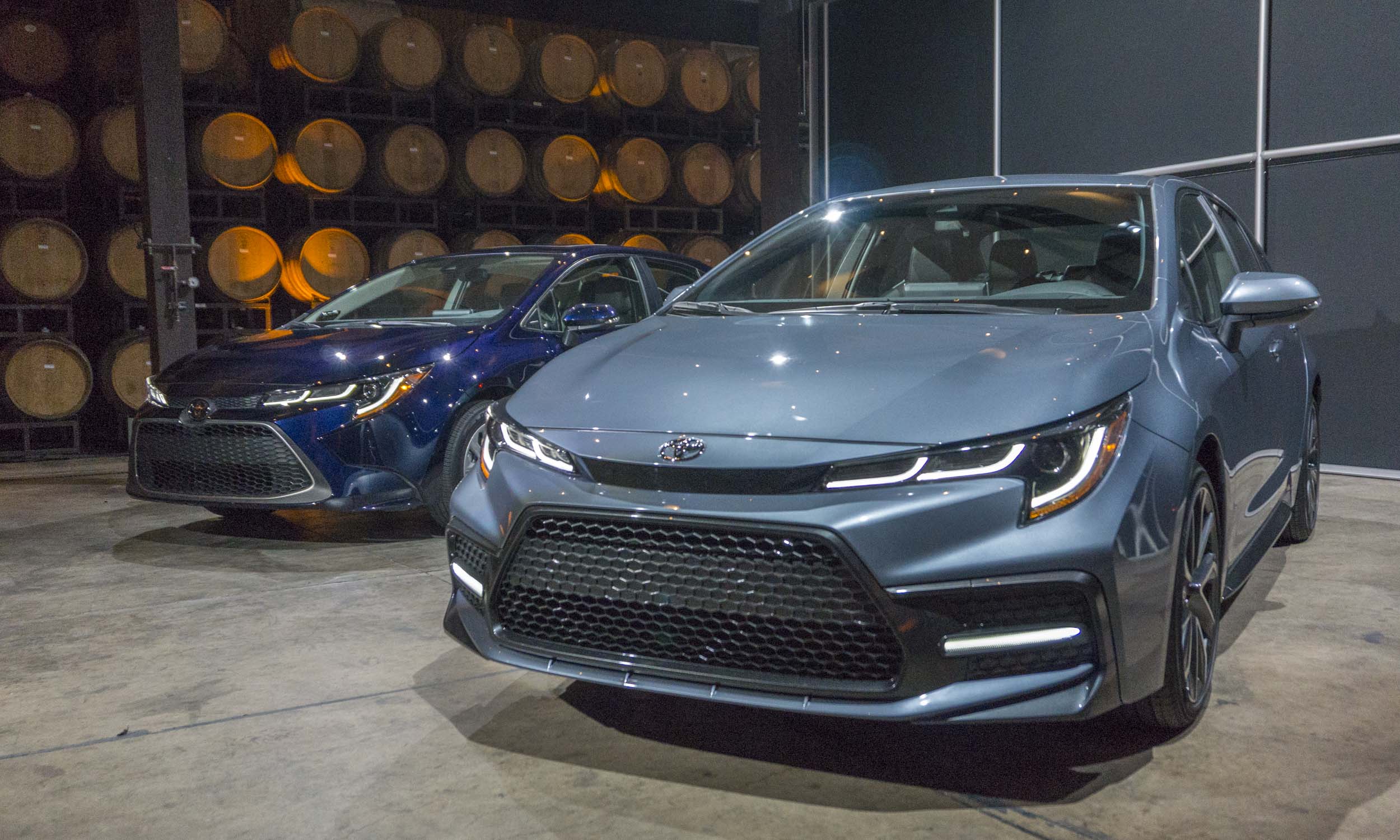 Unique Front Design
Up front the fascia is specific to different trim lines ?similar to the design treatment of the larger Camry. The SE and XSE get a body-color chin spoiler, LED accent lights and additional aero treatment to emphasize their sporty nature. The grille is a bit smaller in the SE and XSE but more aggressive looking. 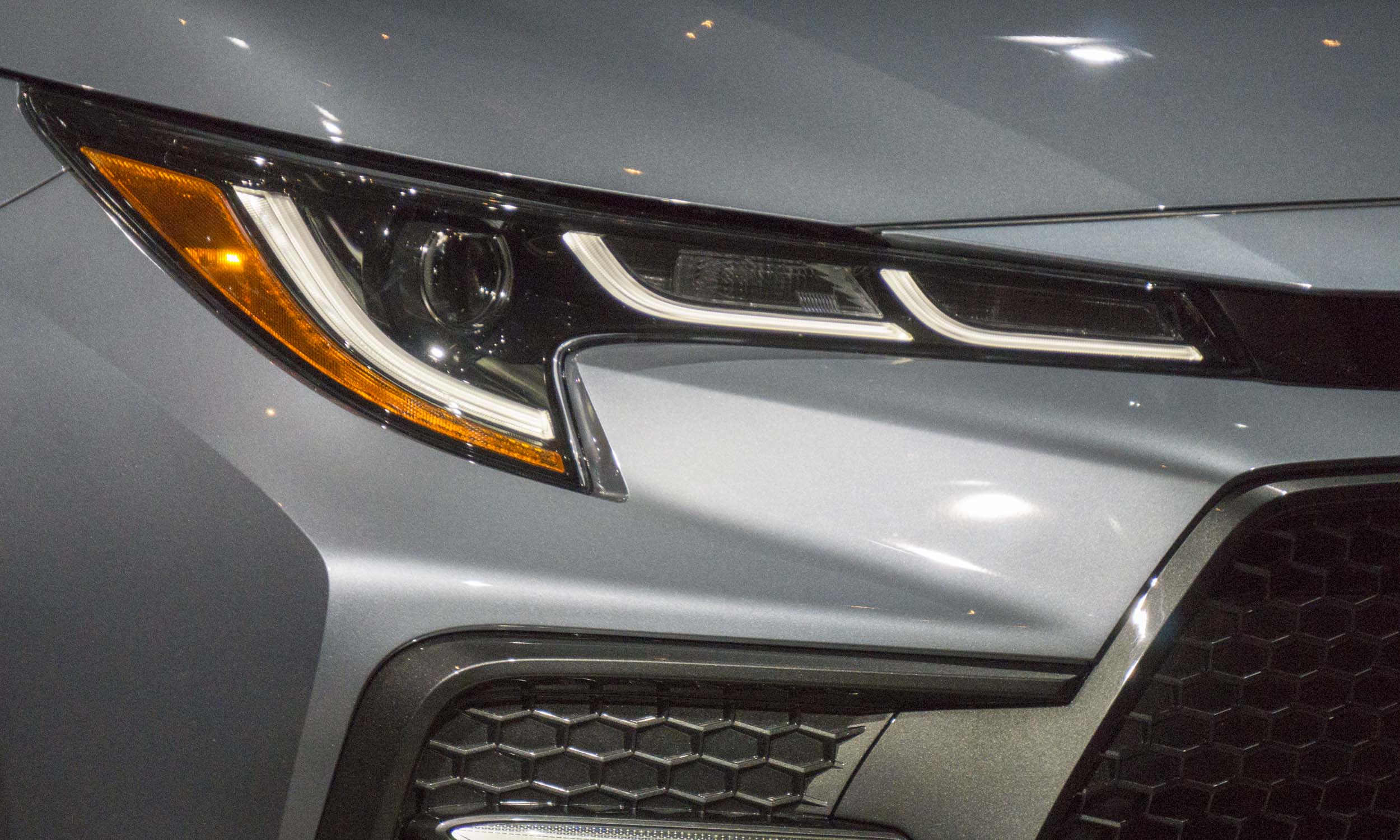 Signature Headlights
Slim LED headlights are wrapped into the fenders, which further emphasize the wider styling while providing a new signature look at night. Toyota offers the Corolla with an optional Adaptive Front-lighting System, which changes the direction of the low-beam lights to match the steering angle. 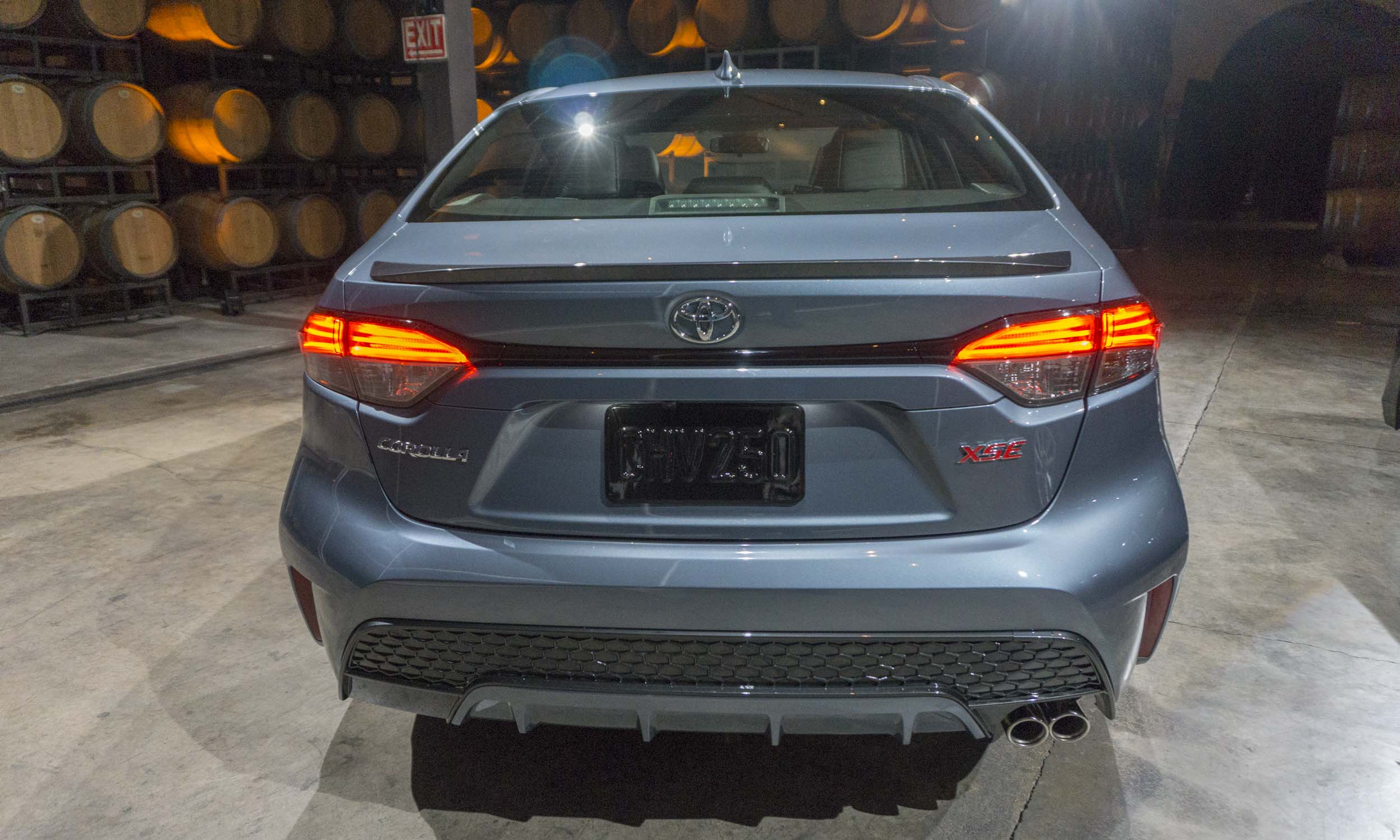 LED Taillights
LED lamps are used at the rear as well, for a more distinctive look. The sportier SE and XSE get smoked taillights to set them apart from the other trims. These sportier trims also have a rear lip spoiler for further differentiation.

Big Wheels
Another first for the 2020 Corolla is a larger wheel size: the first time 18-inch wheels will be available. The SE and XSE come standard with these larger wheels, while the LE and XLE have 16-inch wheels for standard equipment. 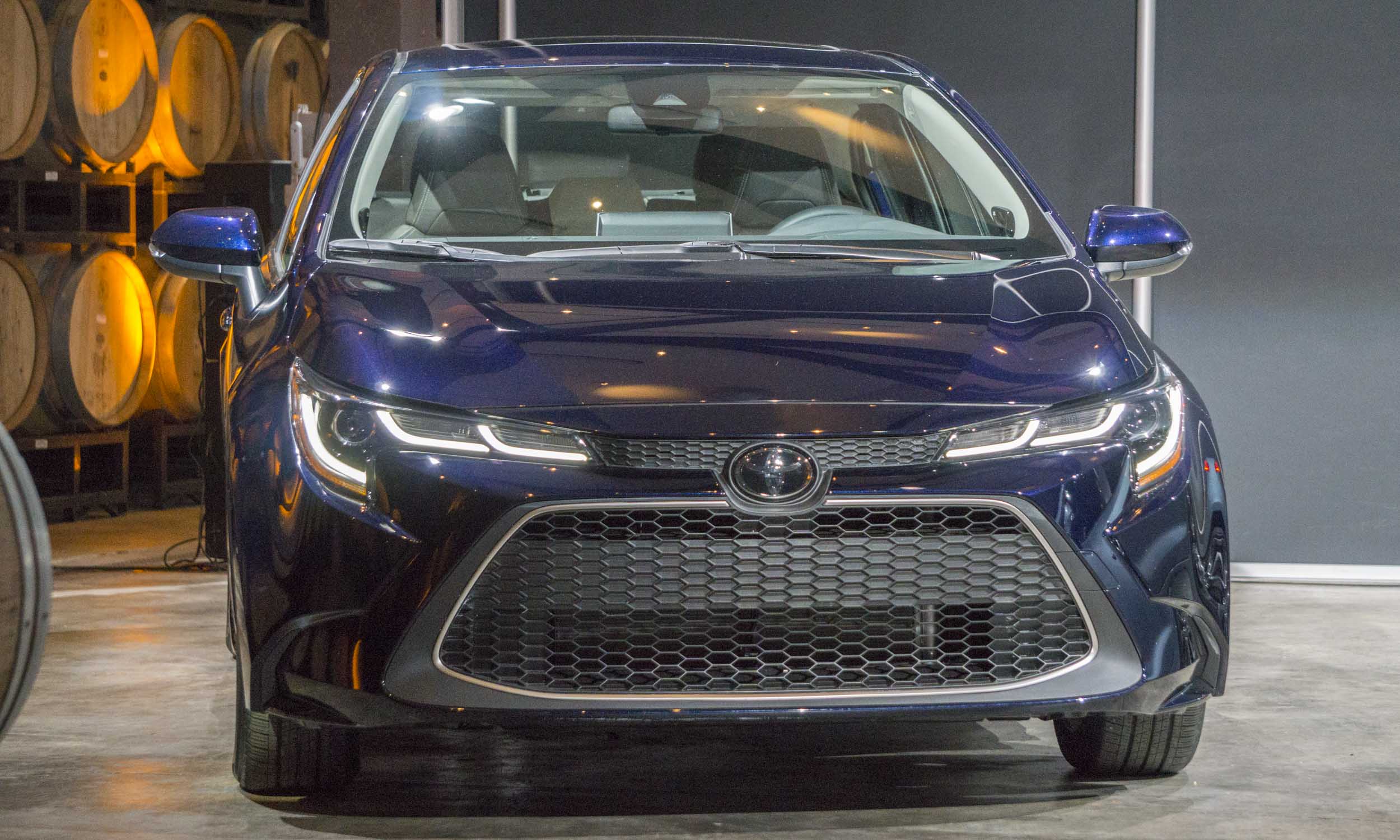 Safety
Toyota equips all levels of the new Corolla with Toyota Safety Sense 2.0. This suite of advanced safety features includes automatic emergency braking, lane-departure alert with steering assist, automatic high beams and sign recognition. Also standard is full-speed adaptive cruise control (CVT only,) which can maintain a set distance from the car in front, all the way to a full stop. This can be quite helpful in stop-and-go traffic. 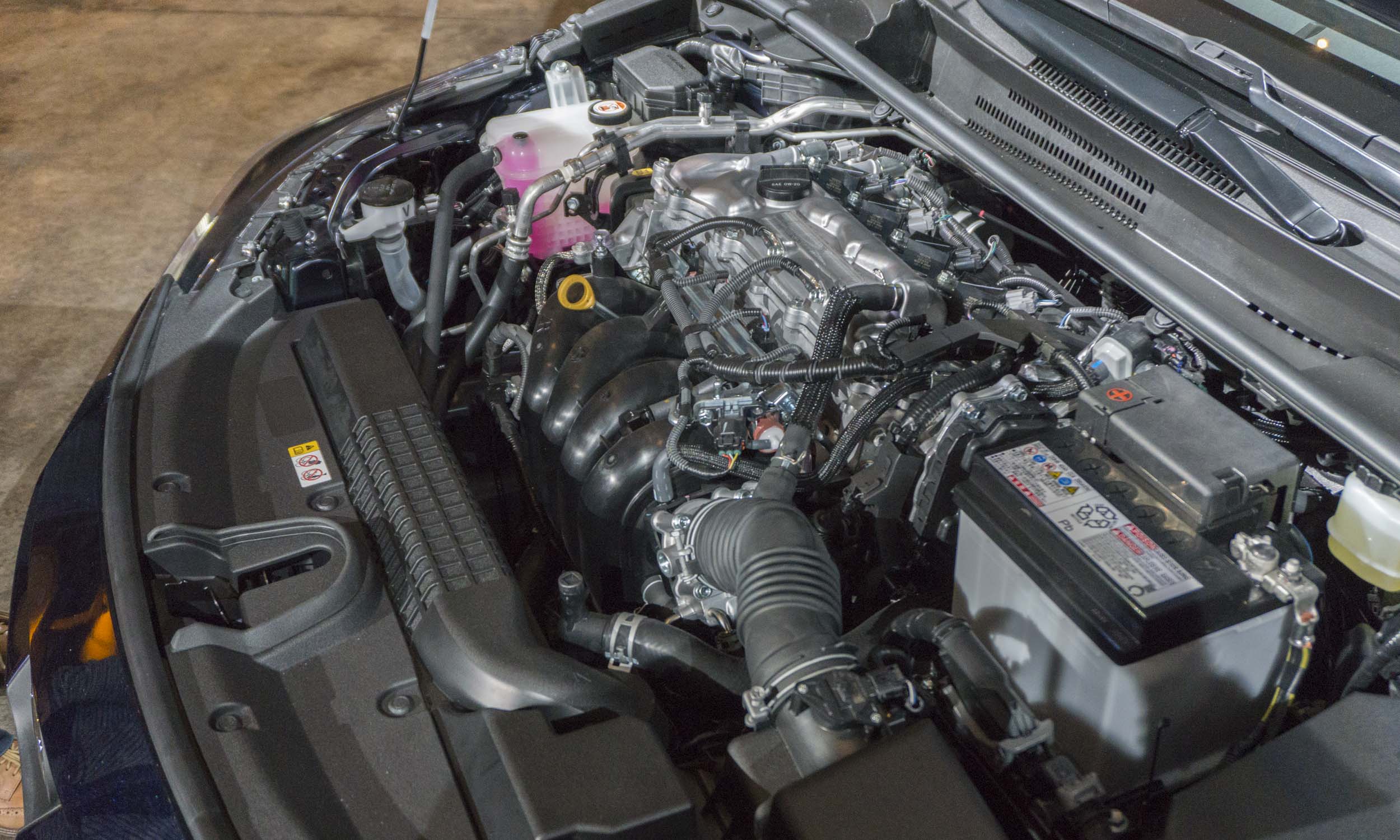 Powertrain Options
Two different engines will be available for the 2020 Toyota Corolla. The L, LE and XLE trims will get an updated version of the 1.8-liter 4-cylinder unit used in the previous-generation Corolla, producing 139 horsepower as well as improved fuel efficiency.

More Power for Sport
For the first time the sporty trims of the Corolla will offer more than just styling and suspension tuning ? they actually get more power. The SE and XSE benefit from a completely new 2.0-liter Dynamic Force 4-cylinder engine that produces 169 horsepower and 151 lb-ft of torque. 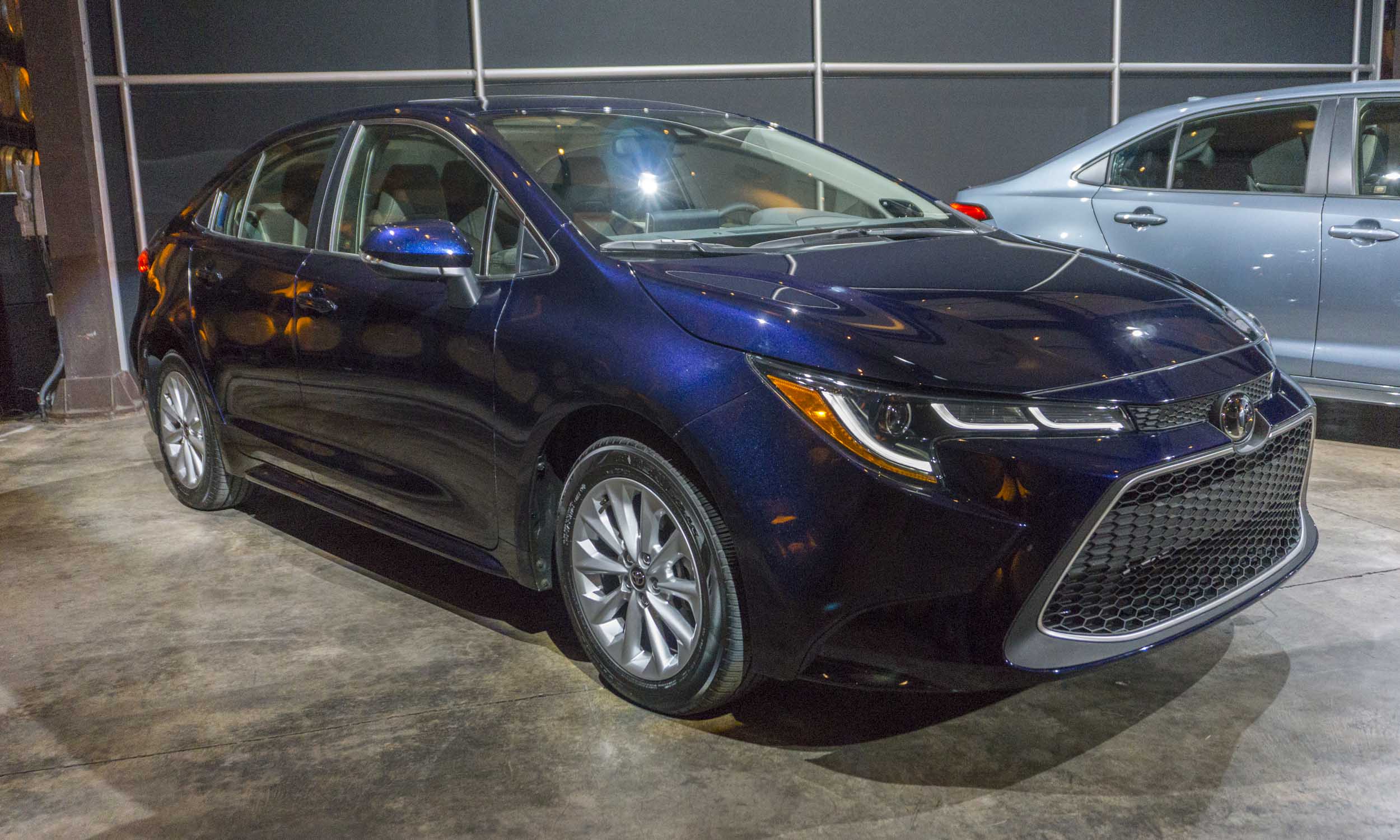 CVT
Both engines are teamed with a new Dynamic Shift continuously variable transmission that achieves the fuel-efficiency expected of a CVT while providing the feel of a typical multi-speed automatic transmission. On the SE and XSE trims, the CVT features a physical first gear that provides better gear-shifting feel at launch. There?s also a simulated 10-speed that ?shifts? when in sport mode. 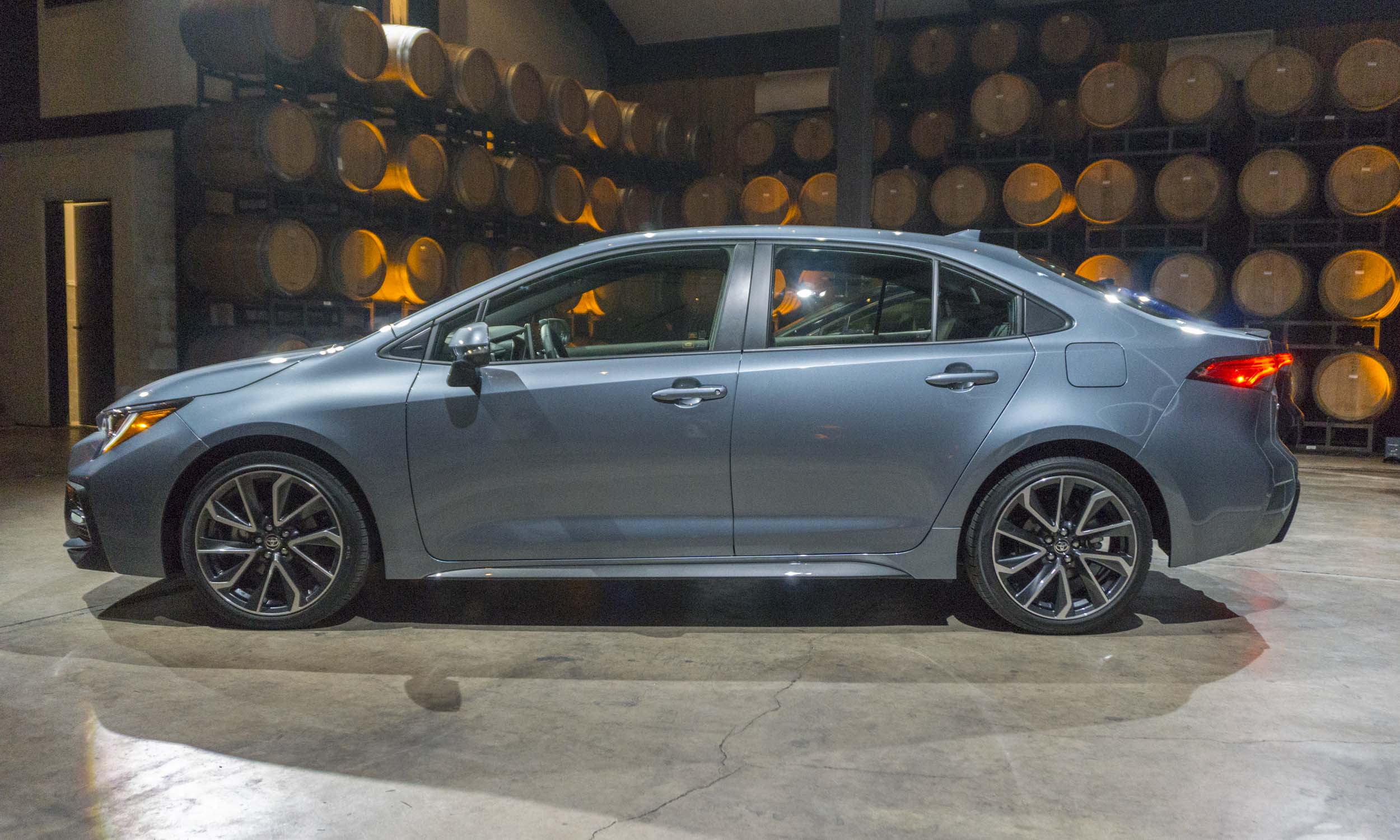 Manual Gearbox
We?re happy to see that Corolla is still available with a proper manual gearbox, and this one looks interesting. The 6-speed iMT, which stands for Intelligent Manual Transmission, features downshift rev matching ? a feature more common in performance cars. Hill-start Assist is also standard and of great help when starting on steep inclines. The manual transmission will be available on the sportier SE and XSE trims. 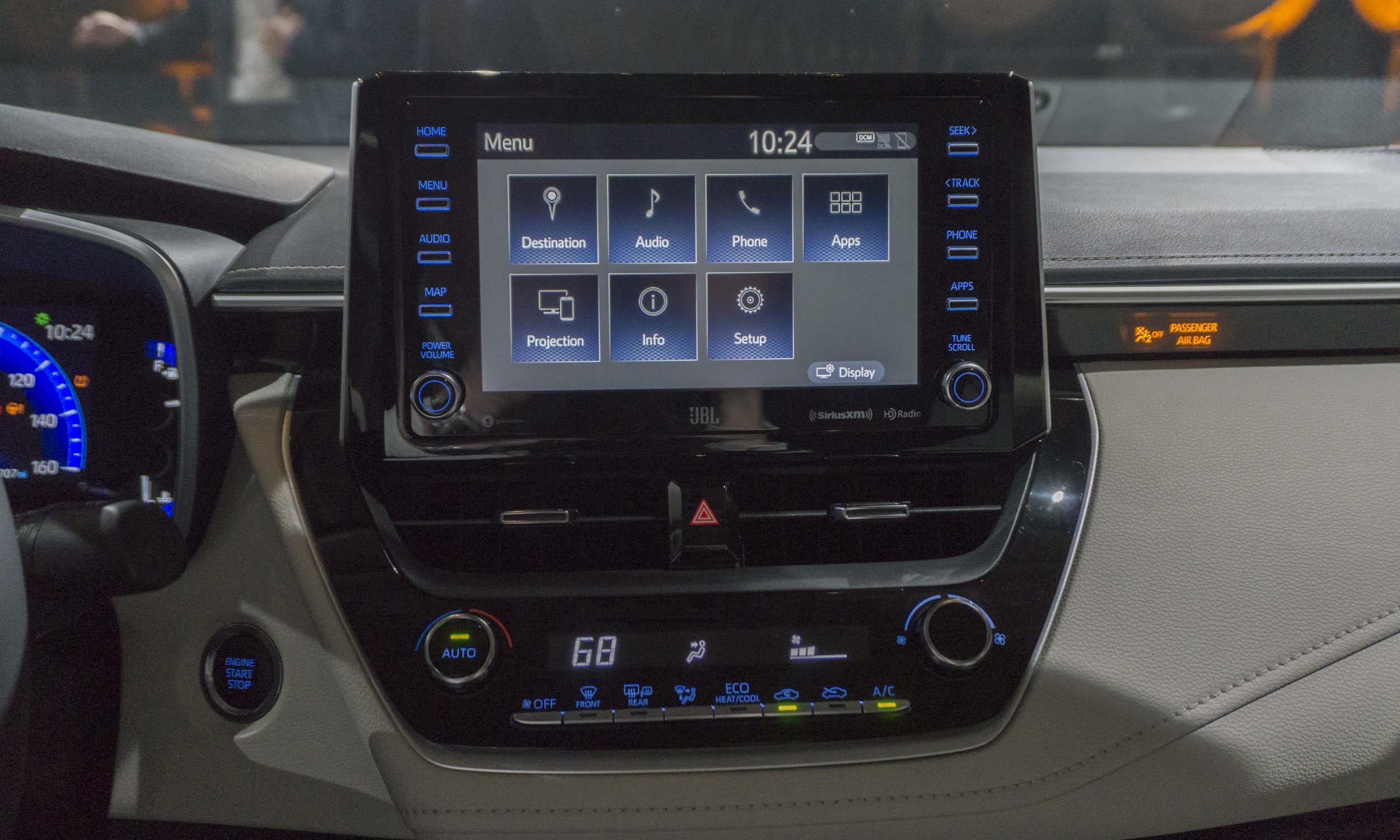 Interior
Like the exterior, the Corolla sedan features a significant upgrade to its interior. Most trim levels will come standard with a high-resolution 8-inch touchscreen display as well as the Entune 3.0 multimedia system. Hard buttons line the screen for easy access to audio, navigation and communication controls. This includes knobs for volume and tuning. The climate system is accessed through a separate set of controls for easy access. Wireless charging for mobile devices is also available. 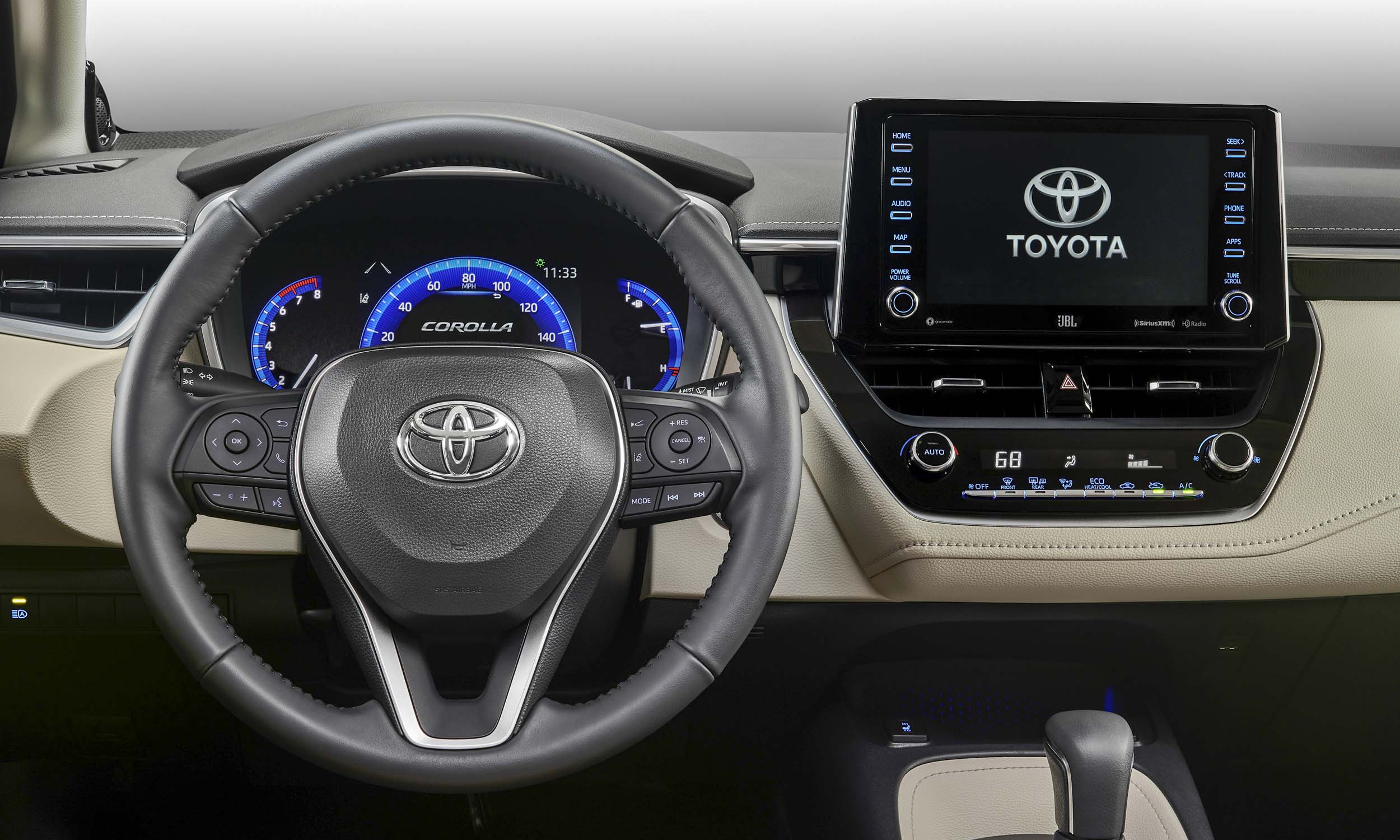 Connectivity
All Toyota Corollas will come standard with Apple CarPlay as well as Amazon Alexa integration. At this time there are no plans to add Android Auto. Toyota will also equip all Corollas with Safety Connect ? after a significant collision, the system will contact a call center that can send emergency vehicles as needed. This can also use be used to request roadside assistance or aid in recovery if the vehicle is stolen. 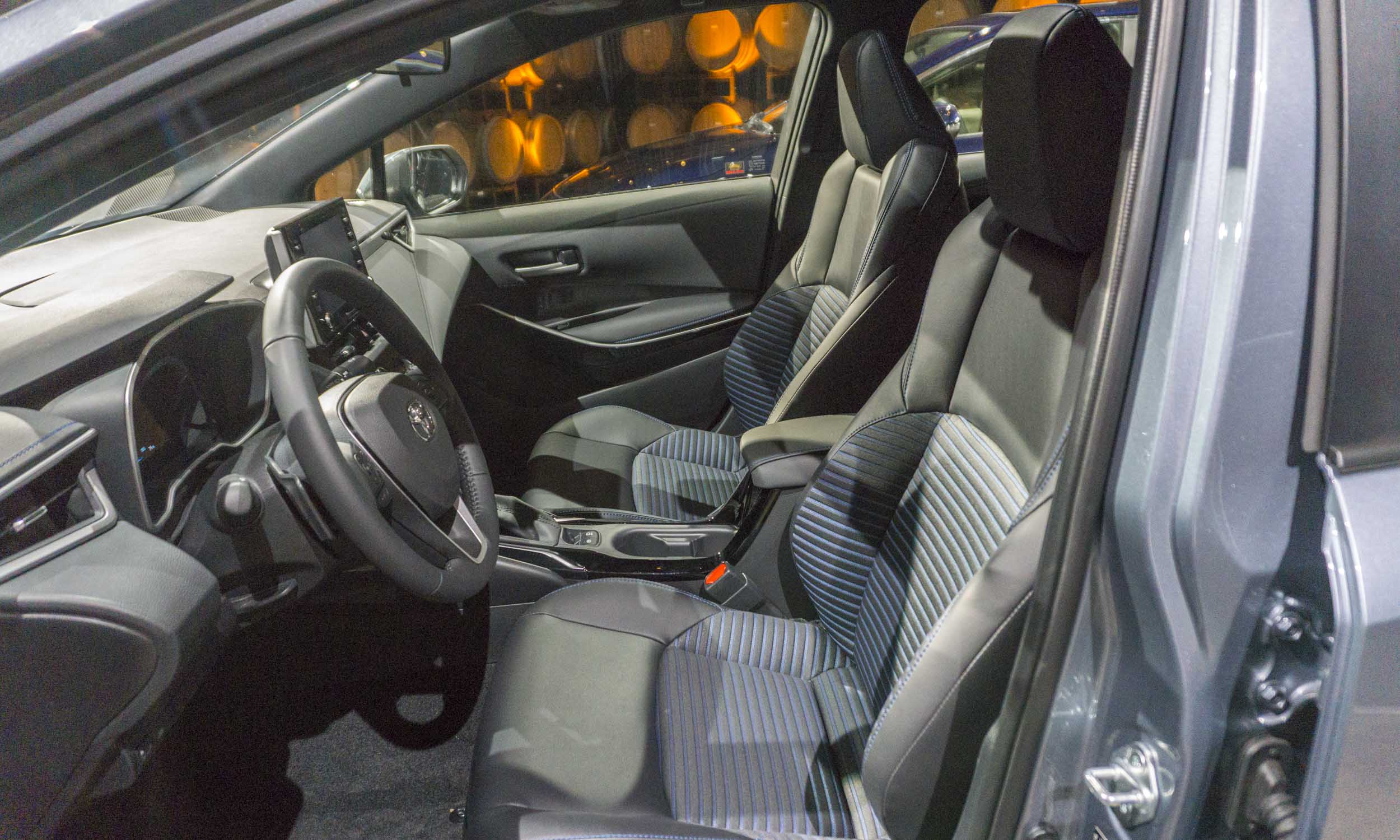 Front Seats
Toyota has created a new sports seat for the SE and XSE trims, featuring better integration of the head restraint and side bolsters. The higher-level versions will feature Softex trim, and two-tone accents add a nice touch. Softex is Toyota?s synthetic leather product designed for easy cleaning and better durability. Although we didn?t get to spend a lot of time in these new seats, they seem to be quite comfortable without being too snug. 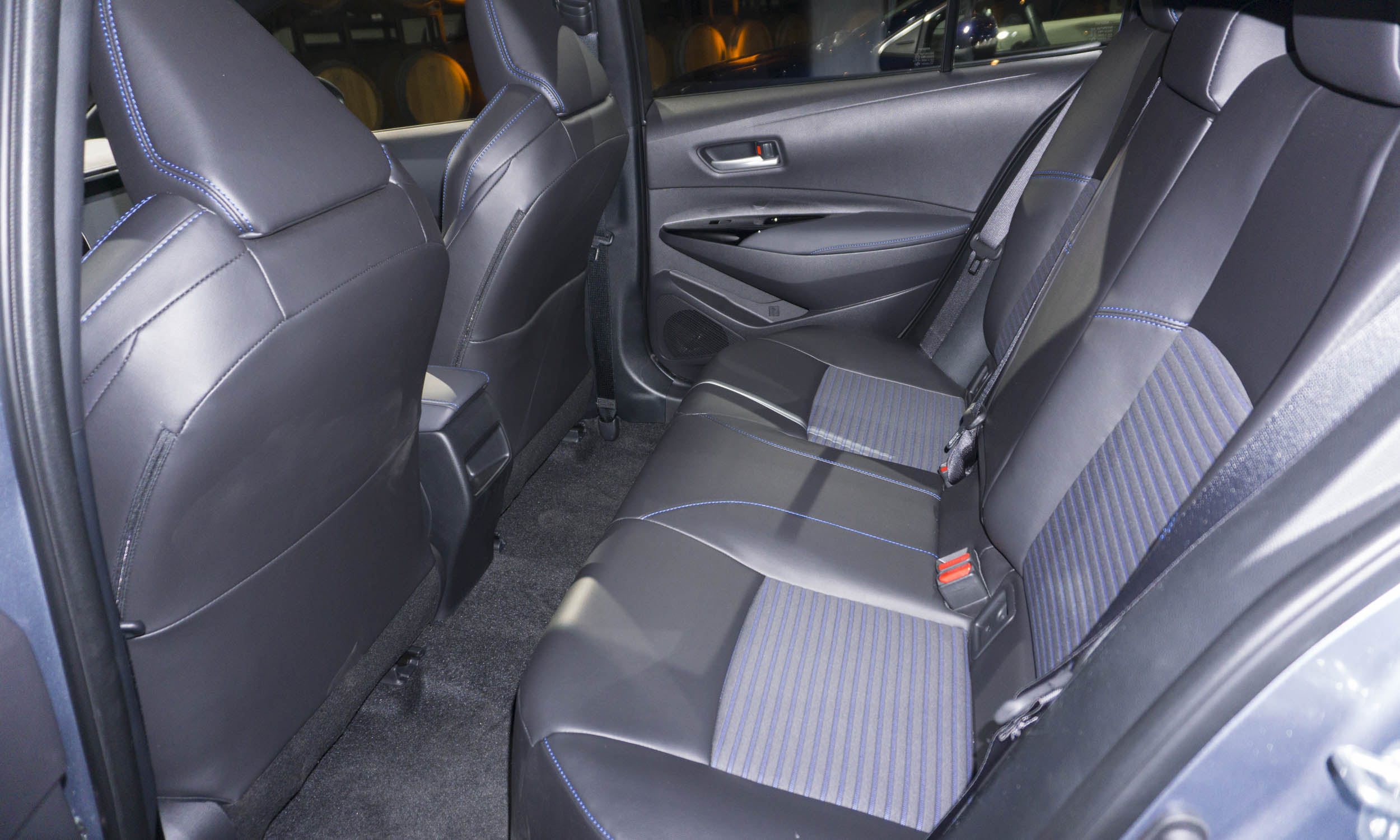 Rear Seat
For such a small car the rear seat is surprisingly roomy. It would be a tight fit for three, but two adults fit with plenty of legroom. 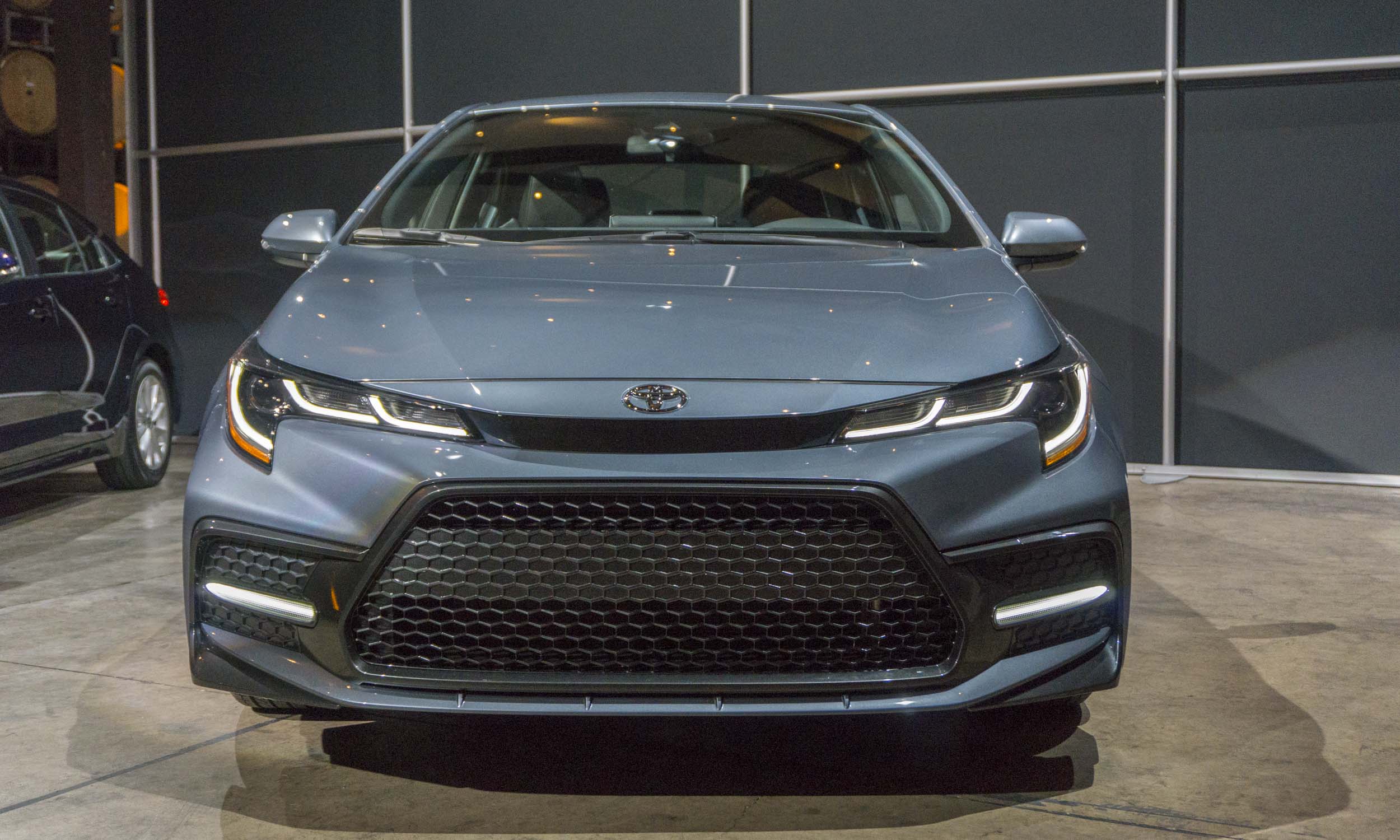 Coming Soon
Look for the 2020 Toyota Corolla sedan to join its hatchback sibling next spring, built in Toyota?s plants in Mississippi and Alabama. Pricing will be announced closer to the on-sale date. 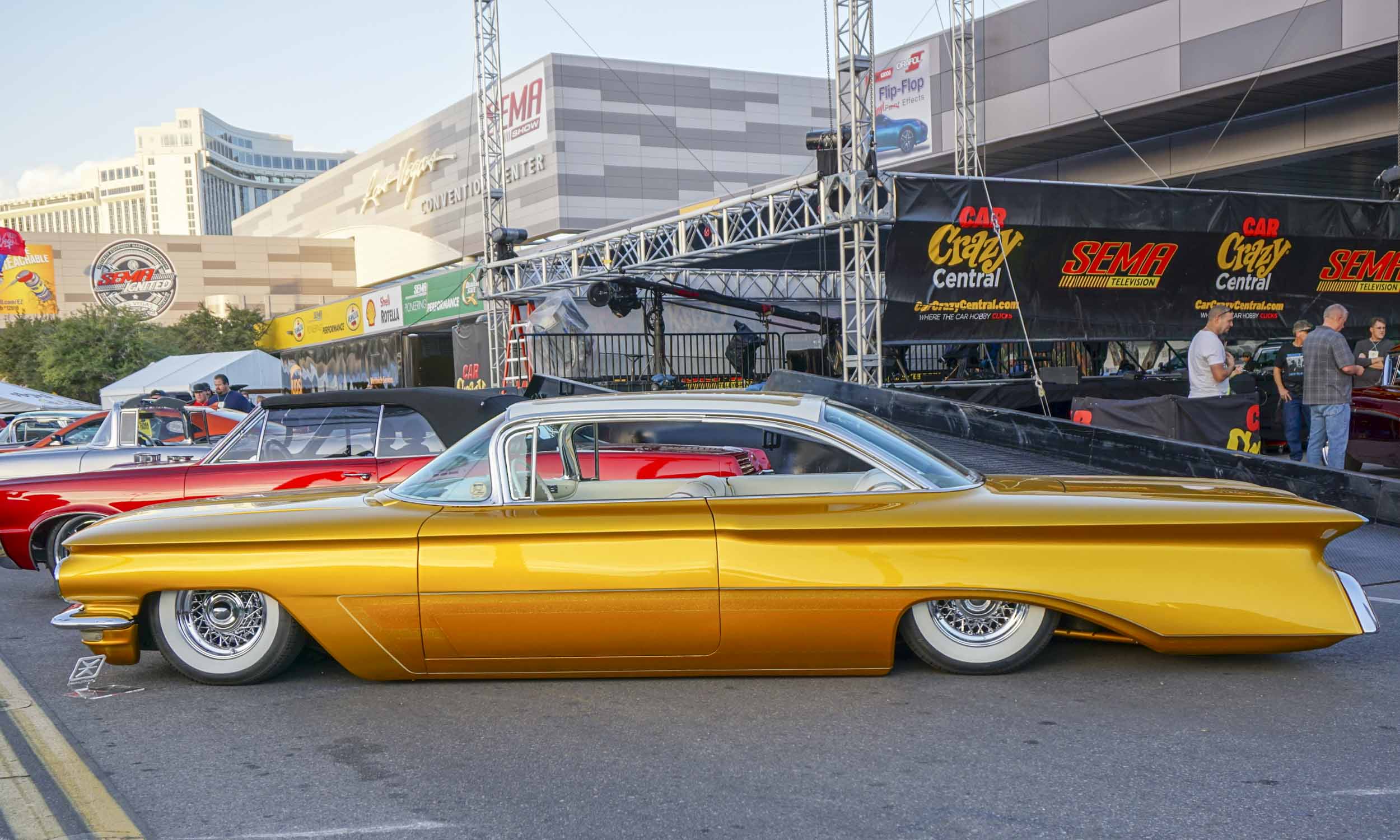