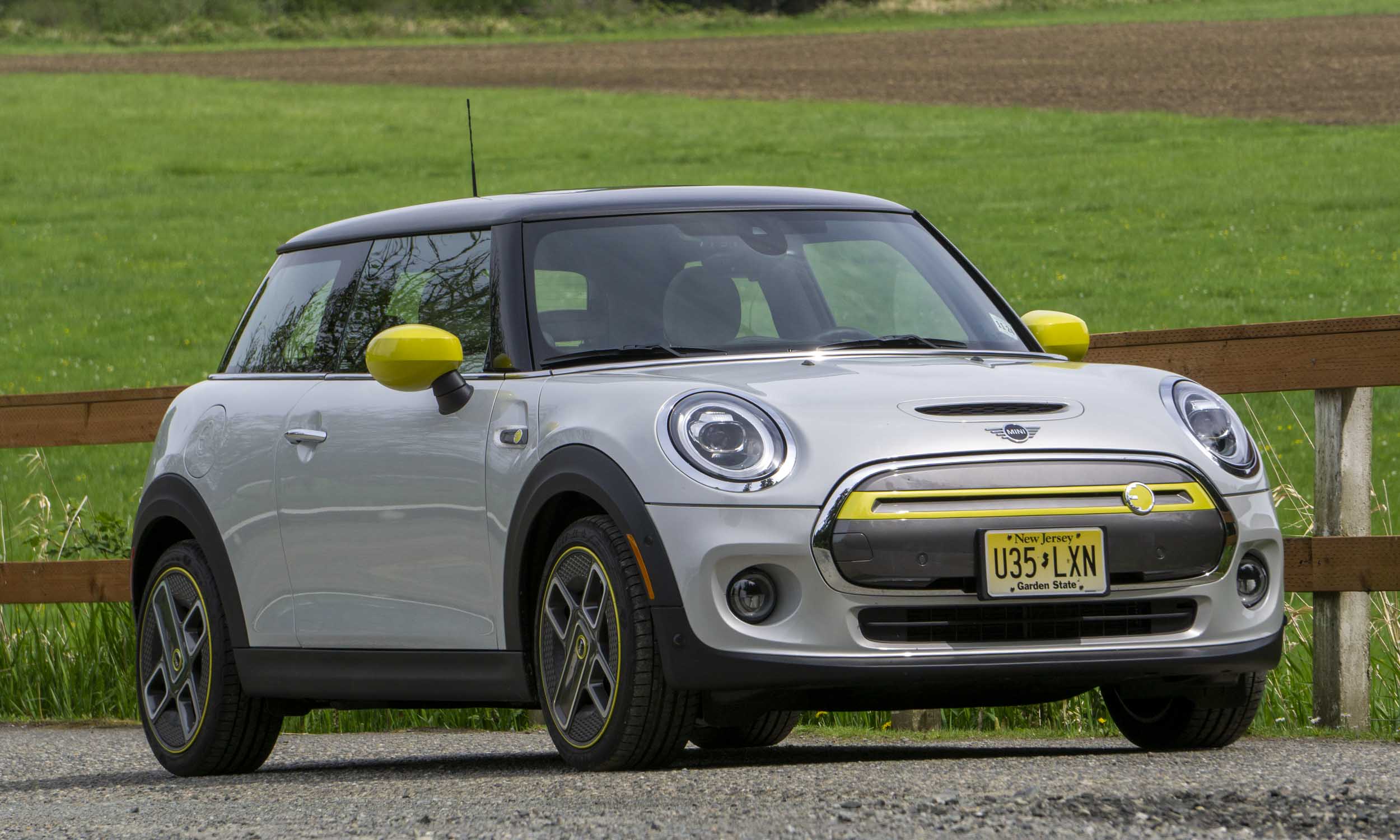 What Is It?
The MINI Cooper is easily one of the most recognizable cars on the road, and has been since it returned to the American market almost 20 years ago. With a reputation for big fun in a small package, the MINI Cooper has now gone electric with its first regular production EV model, the Cooper SE. (MINI did sell a small number of limited-edition MINI E models in 2008.) With proper MINI styling enhanced with an EV theme, the 2020 MINI Cooper SE takes the brand into the future.

Our Tester
MINI USA loaned us a 2020 MINI Cooper SE Hardtop 2-Door painted in White Silver Metallic. The SE has three trim packages — our test vehicle was equipped with the top-level Iconic package that includes GPS navigation, a panoramic moonroof, sport seats, a Harmon/Kardon audio system and 17-inch MINI Electric Corona Spoke 2-tone wheels. Total MSRP is $37,750; however, the final price will likely be less for consumers since this MINI is eligible for a $7,500 federal tax credit as well as state subsidies that vary by location. 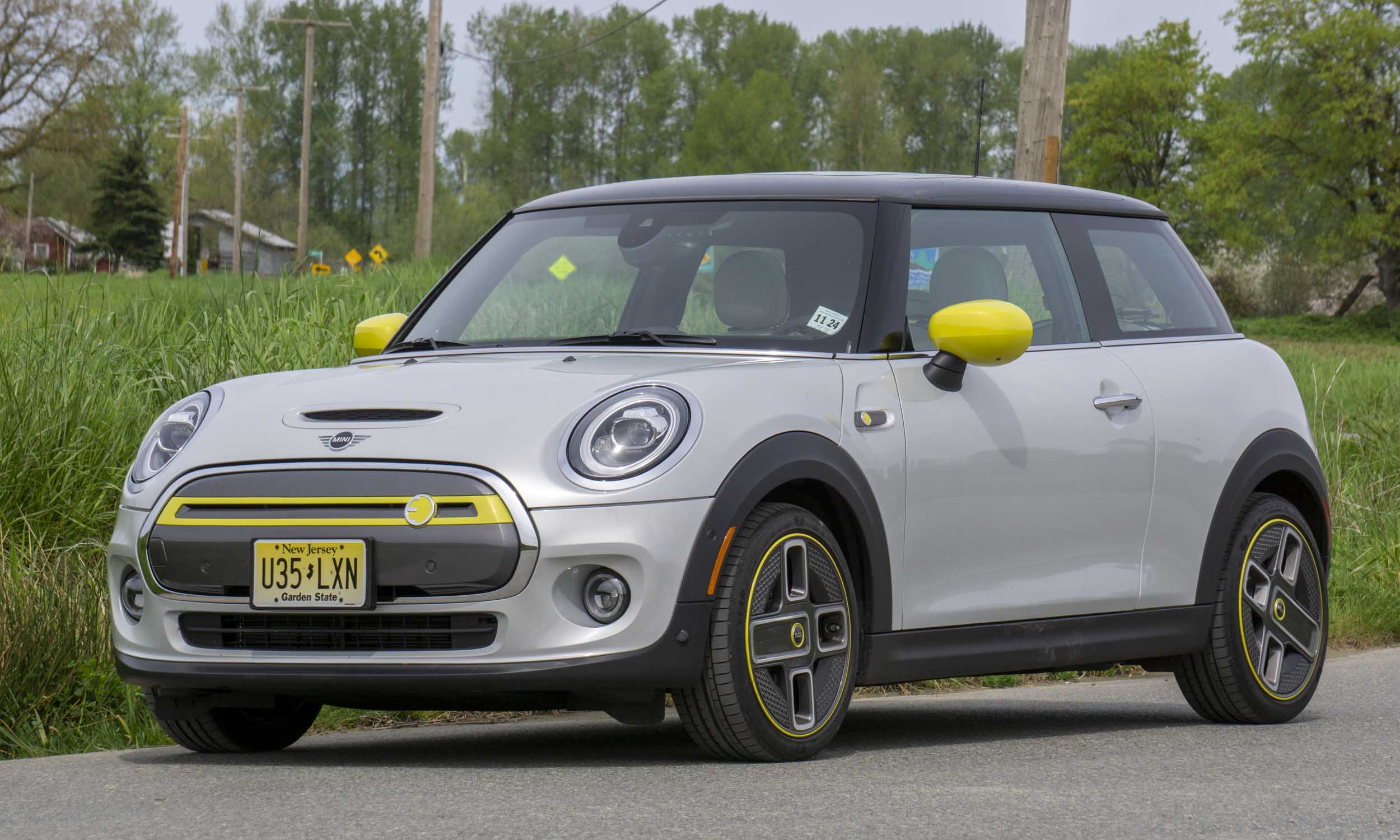 EV Style
The 2020 MINI Cooper SE has styling similar to the gas-powered Cooper S, including a hood scoop. However, the SE can easily be singled out by its solid grille, E badges and available unique wheels. Our SE was even more noticeable since it had yellow mirrors, badging and wheel trim. Of course the SE has no need for an exhaust outlet. 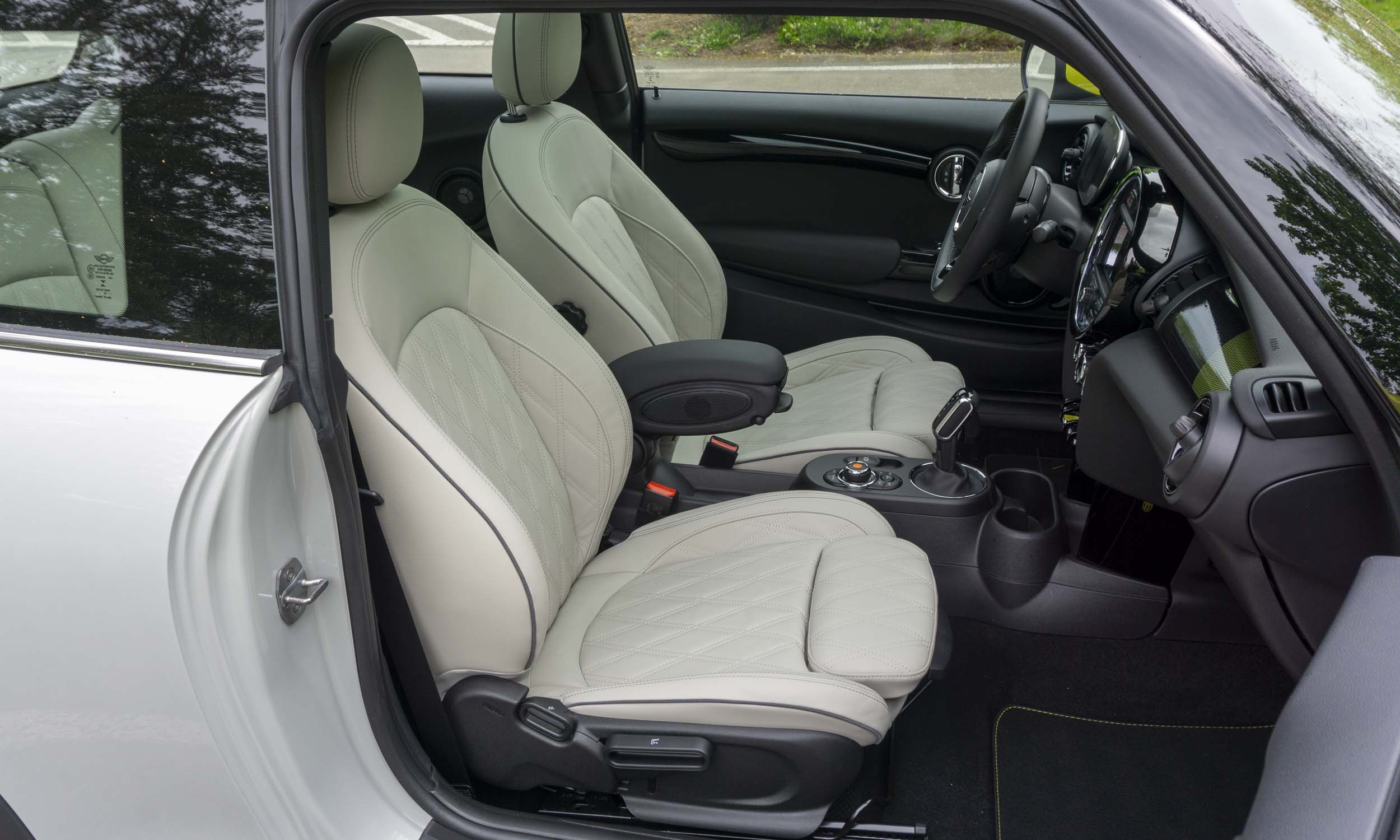 Inner Space
The MINI never ceases to surprise by how roomy the cabin feels in this small car; front-seat passengers do not feel claustrophobic in any way. The standard sport seats are attractive thanks to pleated leather and contrasting piping, and they offer great support and comfort for long trips. 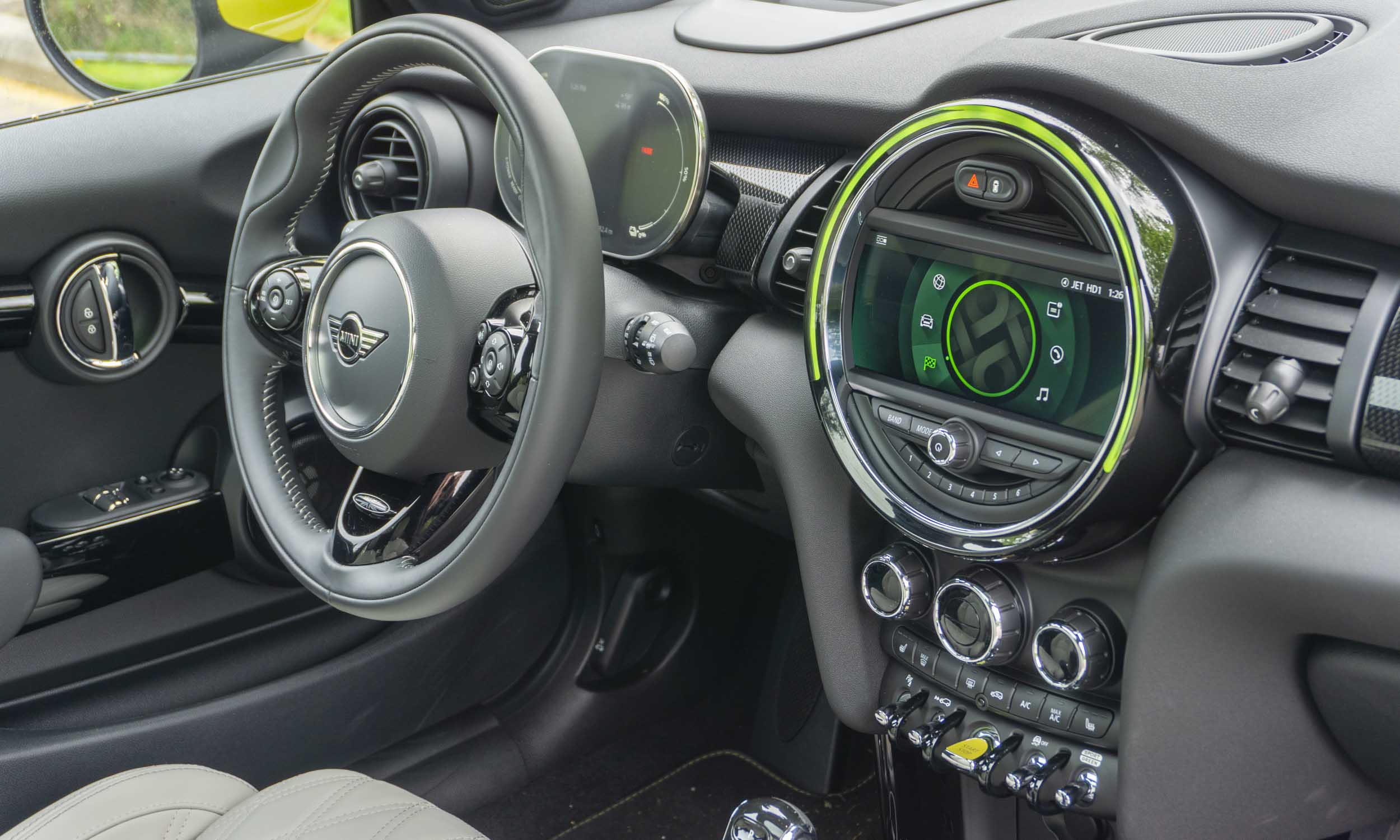 Familiar
When the MINI returned to the U.S. in 2001 it featured a large, round analog speedometer in the middle of the dashboard and a smaller, round tachometer mounted on the steering column above the steering wheel. This Cooper SE continues that theme but with a modern touch — the large, round space in the dash houses the center display screen and audio controls, while above the steering wheel sits a smaller digital display for the driver that shows speed, battery life and charge/discharge information. The toggle-style switches from that original carry through to the SE as well. 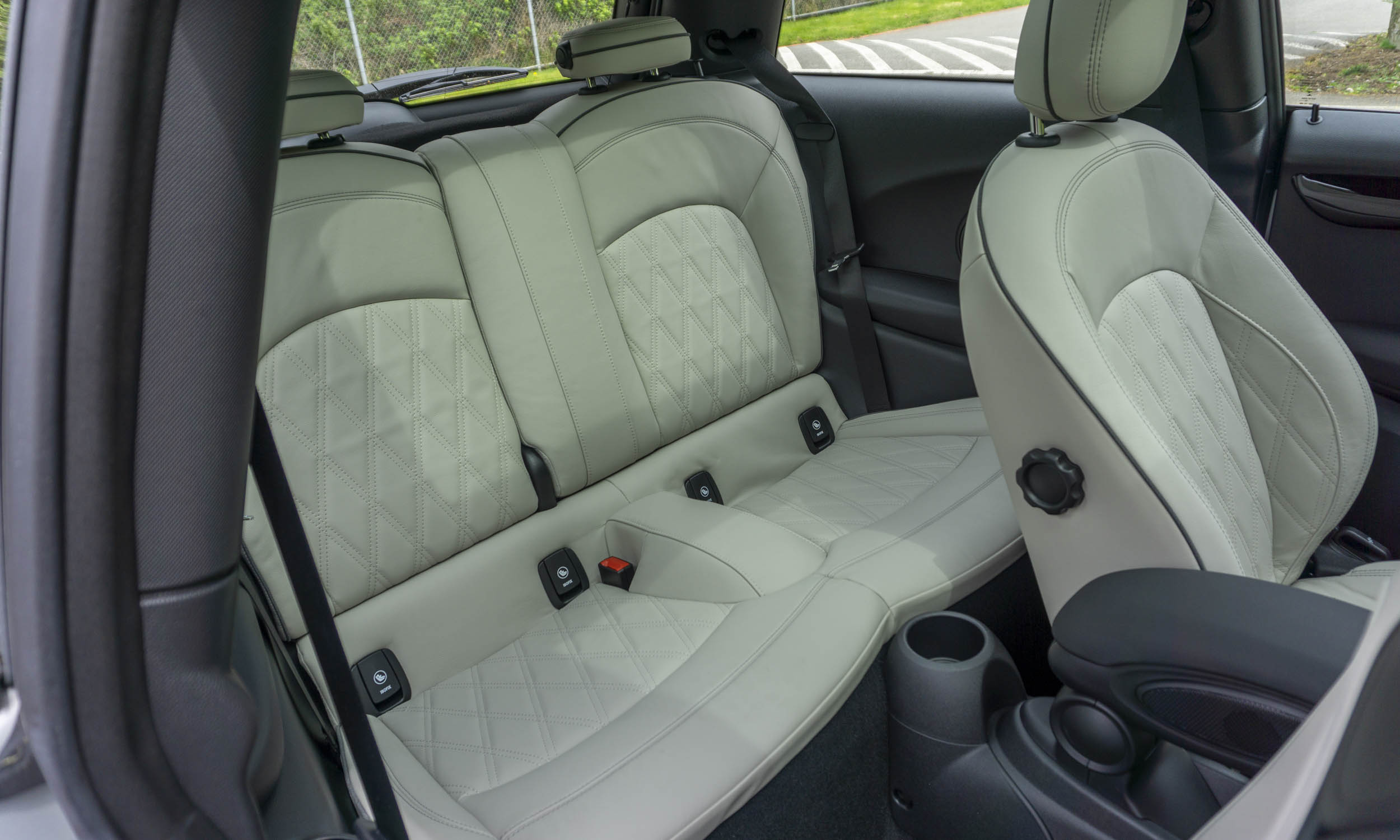 Rear Seat
Although this MINI EV works well for front-seat occupants, rear-seat riders will be a bit cramped — not unexpected in such a small car. The seats themselves are quite comfortable with a decent amount of hip- and headroom. 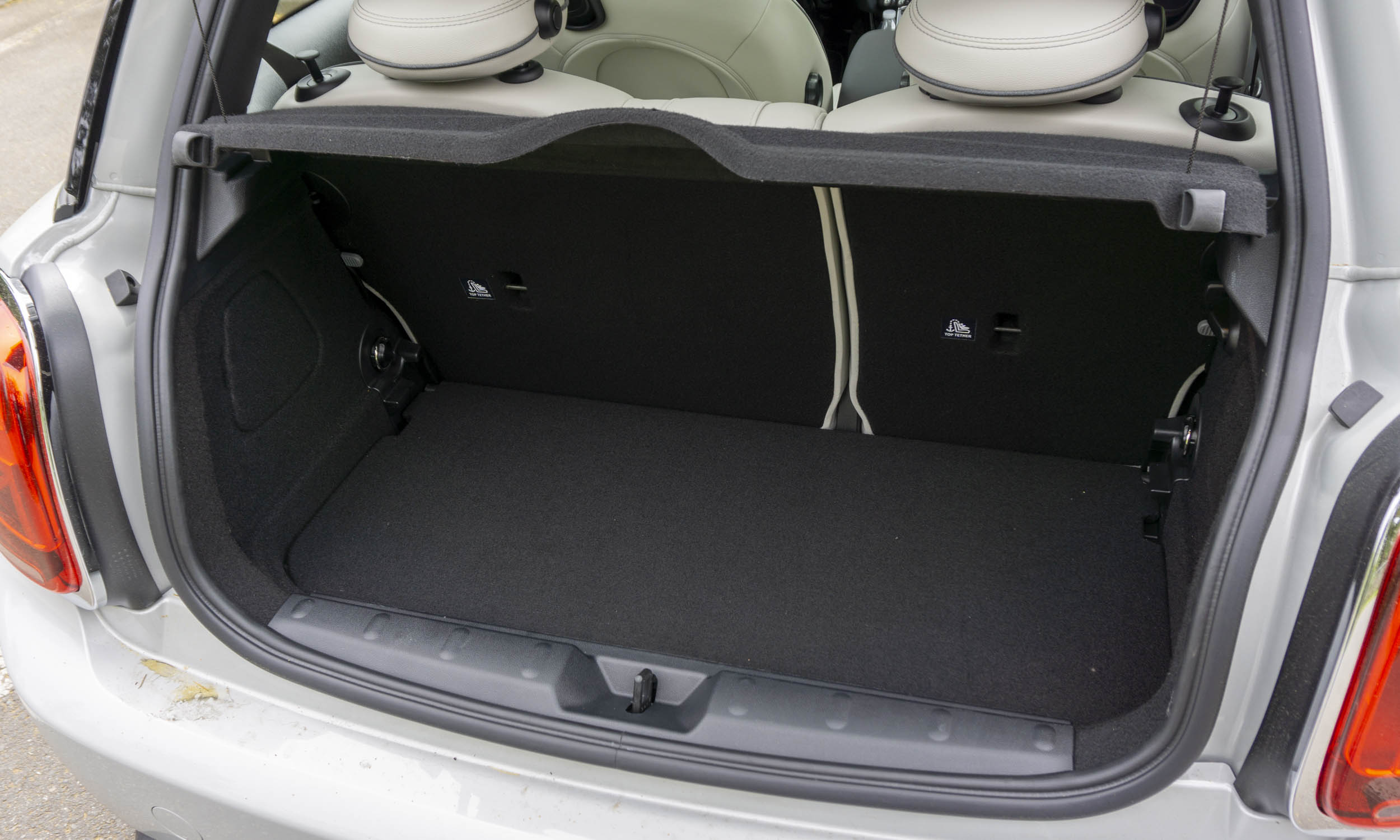 Cargo Space
The MINI Cooper SE does maximize it storage capabilities. Although there’s no room for any large items, the SE can handle several grocery bags or other smaller items. The floor lifts up to reveal a hidden storage area — which also holds the charging cable. Batteries sit below the floor and do not impinge on cargo or passenger space. 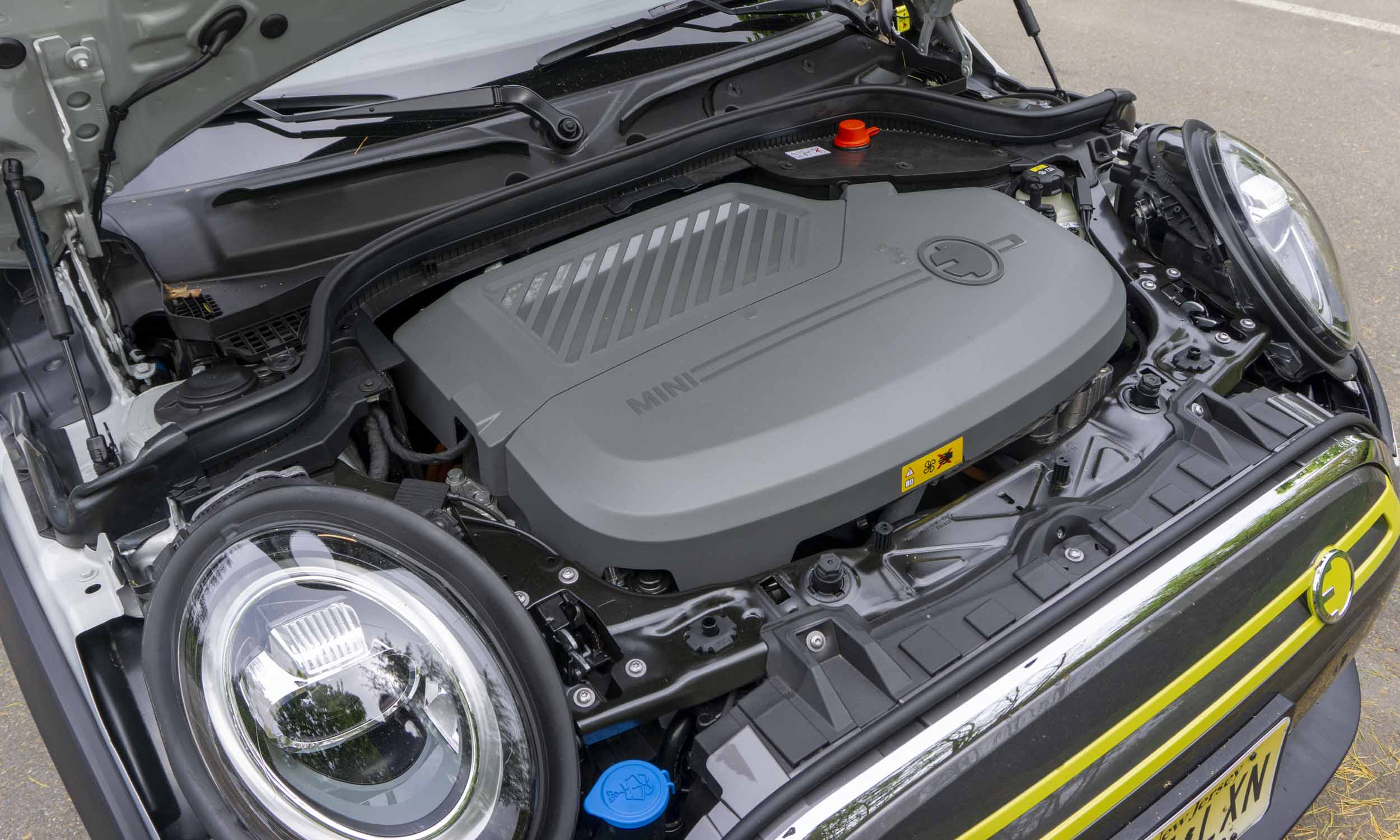 Under the Hood
Powering the MINI Cooper SE is an electric motor generating 181 horsepower and 199 lb-ft of torque. All that torque is available from a standstill, providing a satisfyingly quick jump in acceleration that we love in electric cars. MINI claims the Cooper SE will jet to 60 mph in a hair under 7 seconds — only a tick slower than the gas-powered MINI Cooper S. For what it’s worth, the top speed of the Cooper SE is limited to 93.2 mph. Power for the motor comes from a high-voltage battery consisting of 12 modules of lithium-ion cells rated at 32.6 kWh. 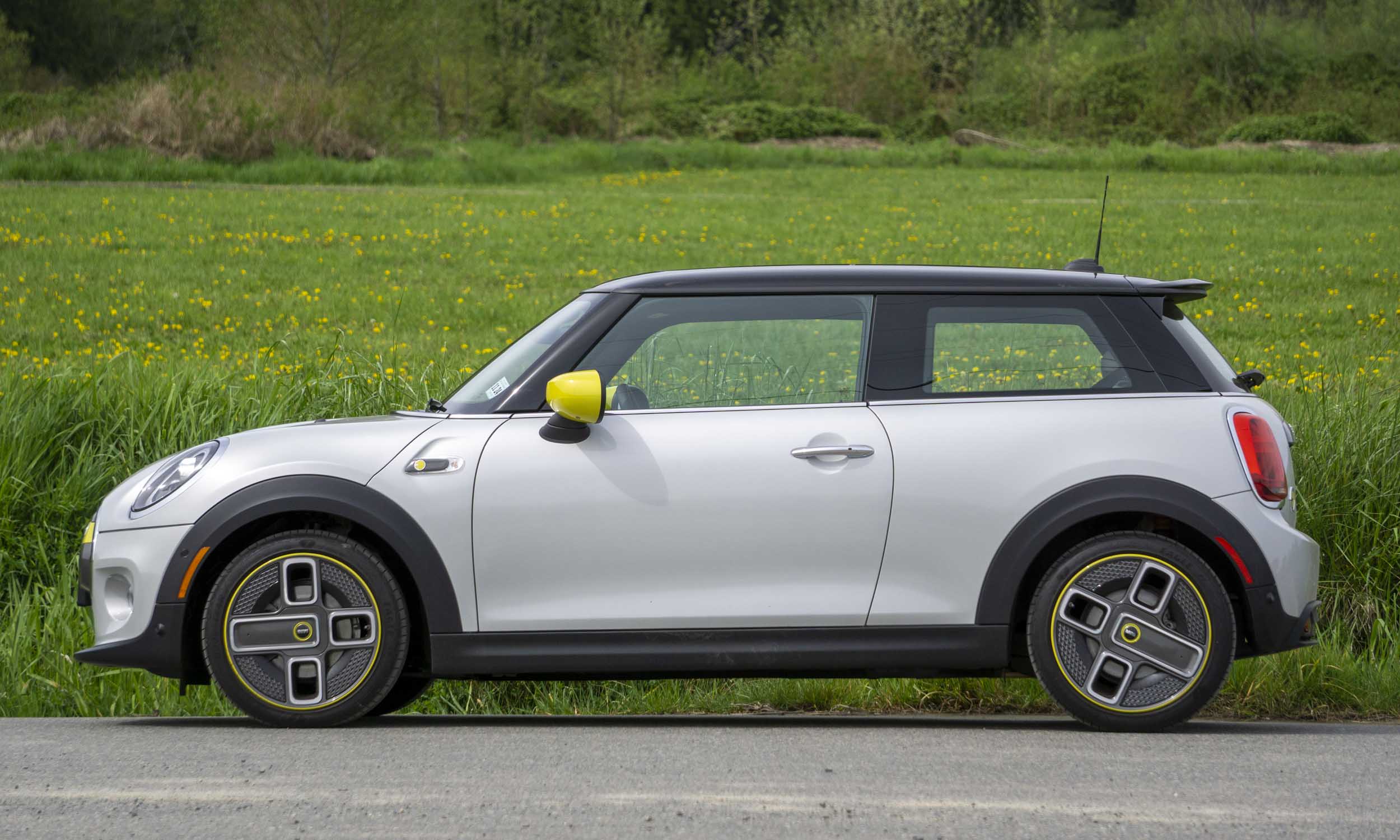 Efficient
The MINI Cooper SE has an EPA combined fuel economy rating 108 MPGe with a range of 110 miles. In our drive we averaged 4 miles/kWh which — based on the price of energy and gasoline in Washington state — equates to about 110 miles for the cost of a gallon of gasoline ($2.75 at the time of this drive). Our total available range changed depending on our driving style; however, the best we experienced was 101 miles with the air-conditioning turned off. 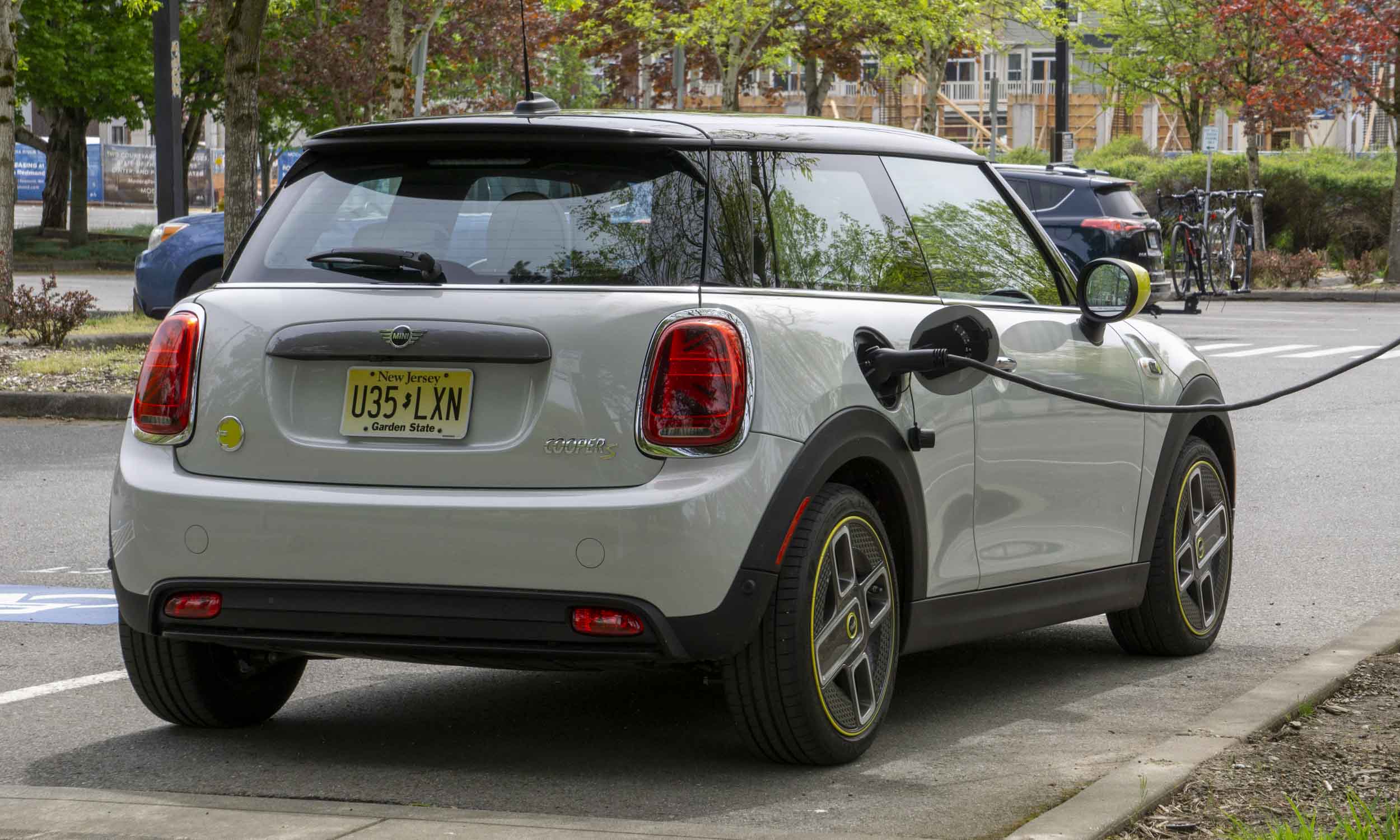 Charging
Even though the 2020 MINI Cooper SE’s driving range is a less than other electric vehicles on the market, it takes less time to fully charger the batteries. According to MINI, the Cooper SE can reach a full charge from empty in about 5 hours on a Level 2 charger, and with a fast DC charging station it is possible to bring the batteries to 80 percent in 36 minutes. When “refueling” our test SE with a standard 110-volt outlet, the charge went from 75 to 100 percent in about 9 hours. 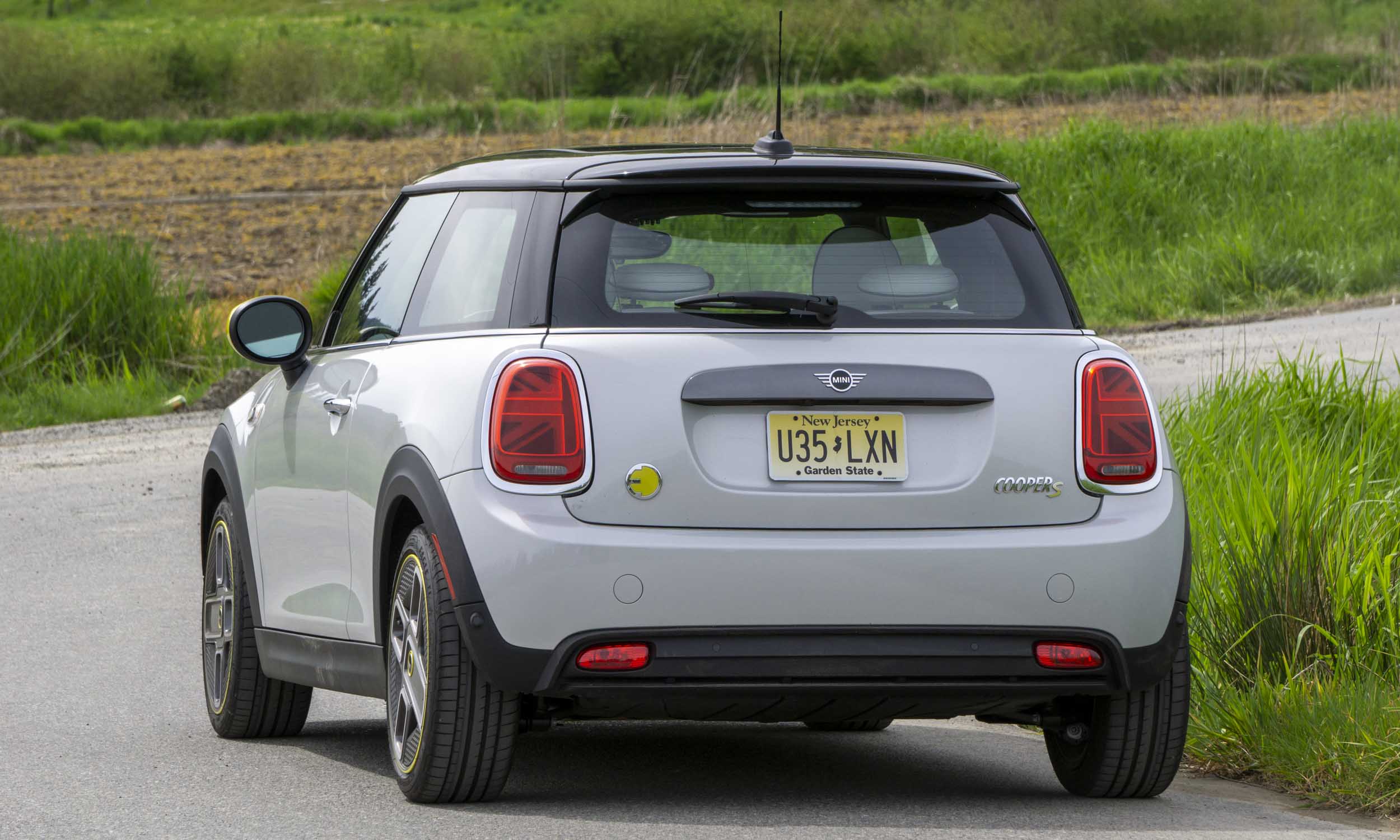 On the Road
Electric cars are enjoyable to drive thanks to their quick acceleration, and the MINI does not disappoint. The Cooper SE feels quick when it jumps off the line, and that instant torque makes passing slower cars quite easy.

One-Pedal Driving
MINI has set up the Cooper SE to recapture as much energy as possible, so the regenerative braking is quite strong. Letting off the accelerator drops speed quickly, as if the brake pedal is being used. From 30 mph the MINI will quickly bring itself to a stop on its own. This one-pedal actions takes a bit of time for adjustment, but after a few miles it becomes intuitive to simply use the single pedal to accelerate as well as decelerate the car. 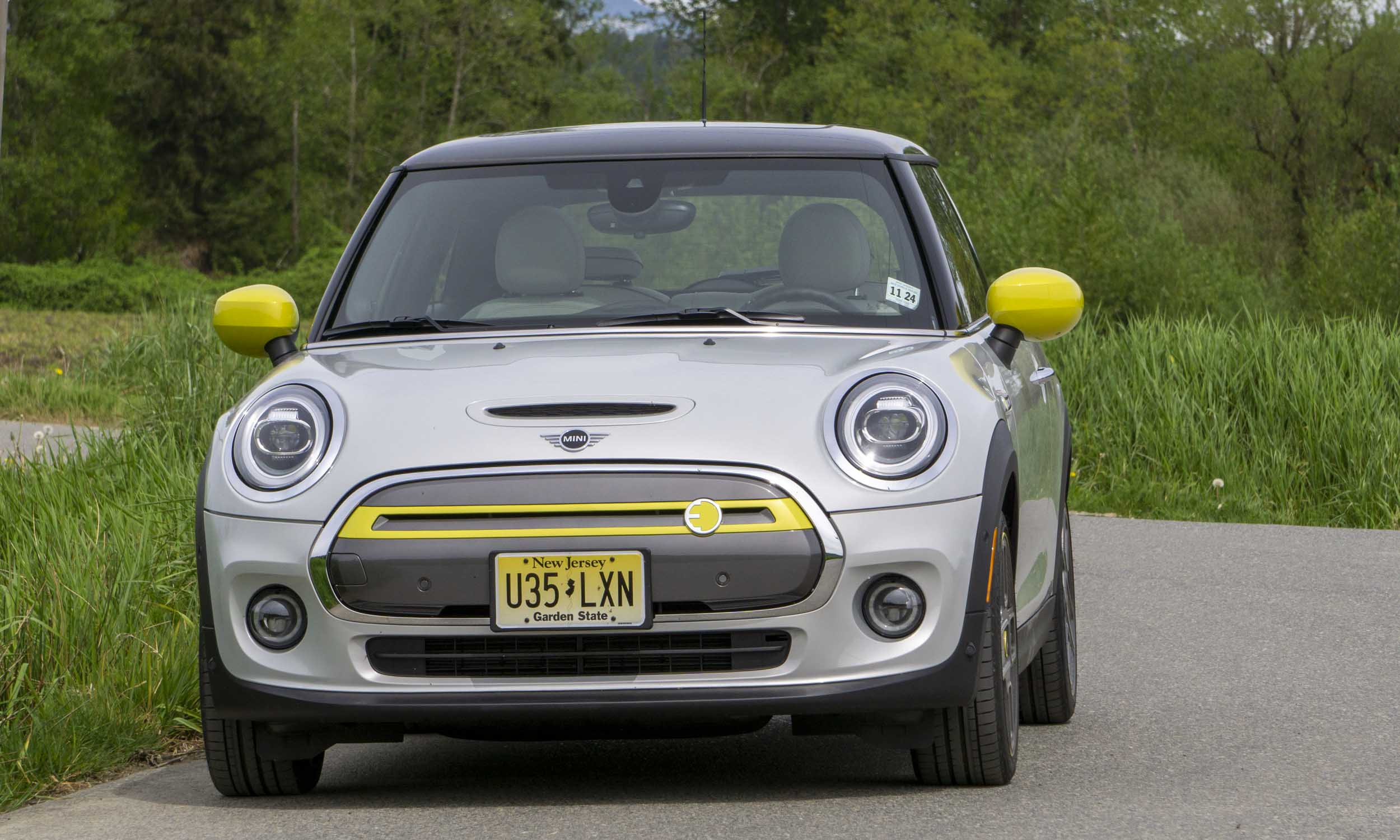 Handling
As we said the MINI Cooper SE feels quick — on par with the gas-powered Cooper S — although the handling is not at the same level. The additional 300 pounds of weight are noticeable in such a small car, and the electric MINI simply does not possess the agile go-kart feeling of its gas-powered sibling. On winding roads the Cooper SE feels heavy, and while it has the power to go fast, it doesn’t feel comfortable during quick turns 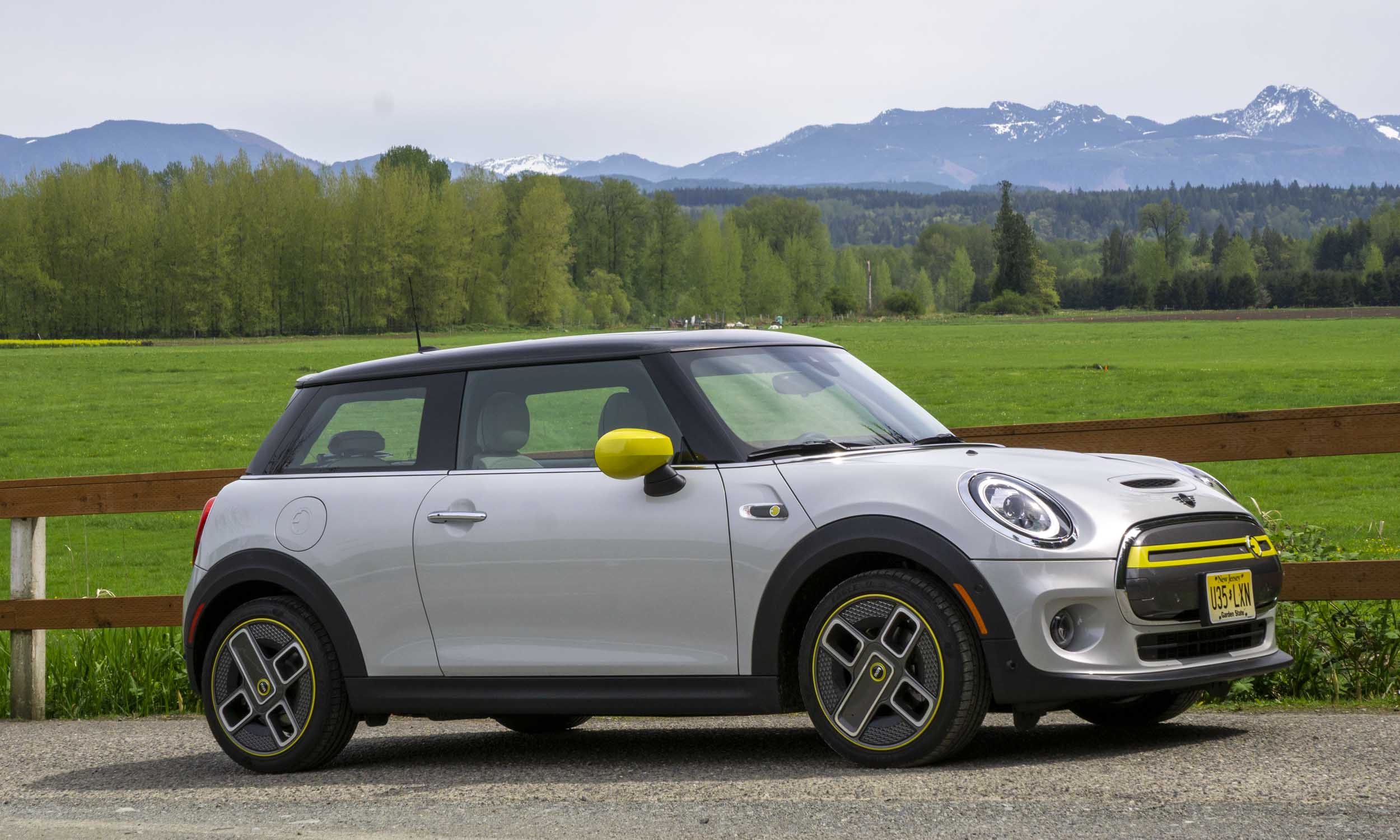 Rating: 8.0
MINI took an interesting approach to its first regular production EV model, matching it in style and power to its existing Cooper S. The Cooper SE will certainly appeal to those who love the MINI design and heritage in addition to the benefits of efficiency and quick acceleration associated with an electric vehicle at an affordable price. However, MINI enthusiasts who seek the go-kart handling typically associated with this iconic small car may be disappointed with the SE. 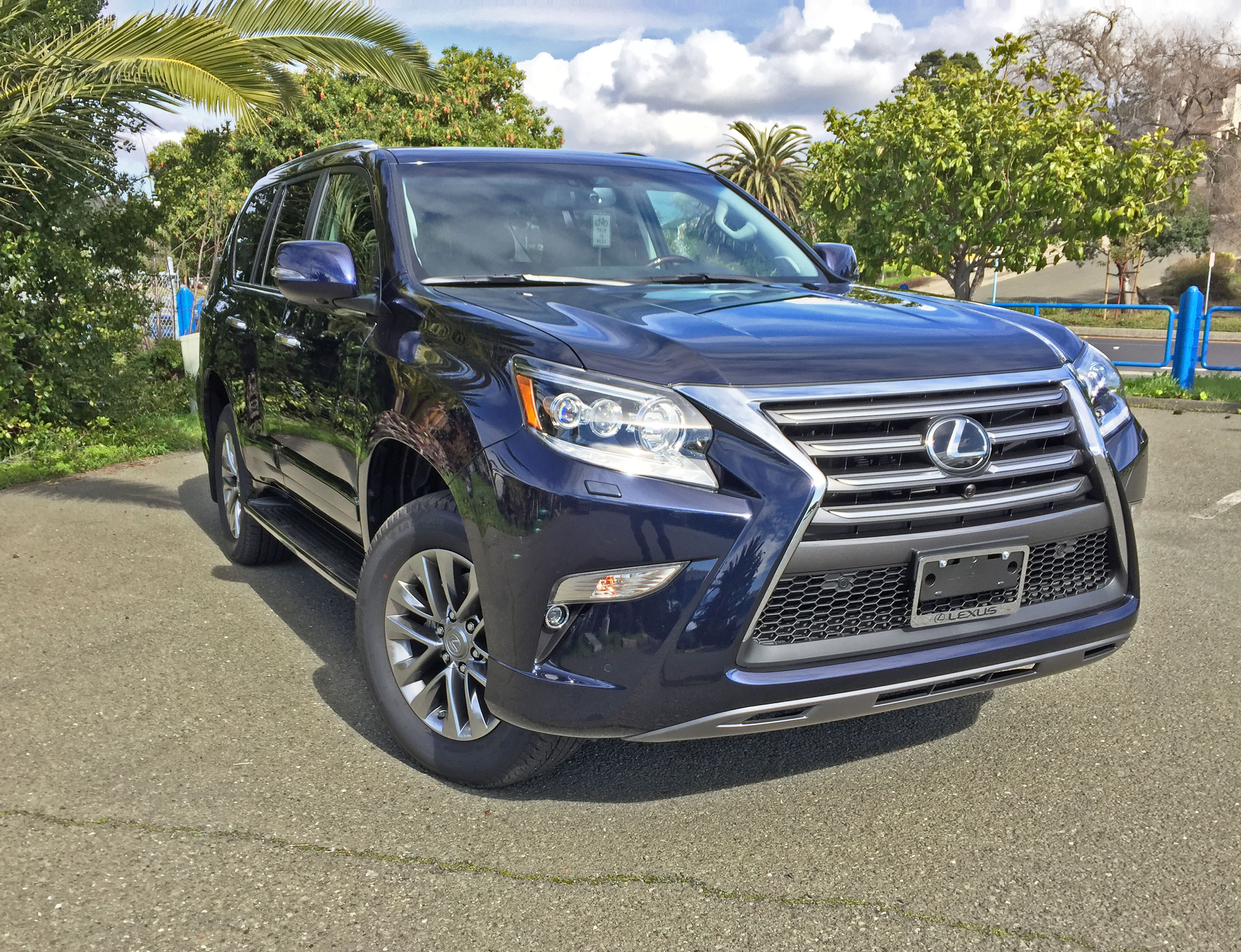 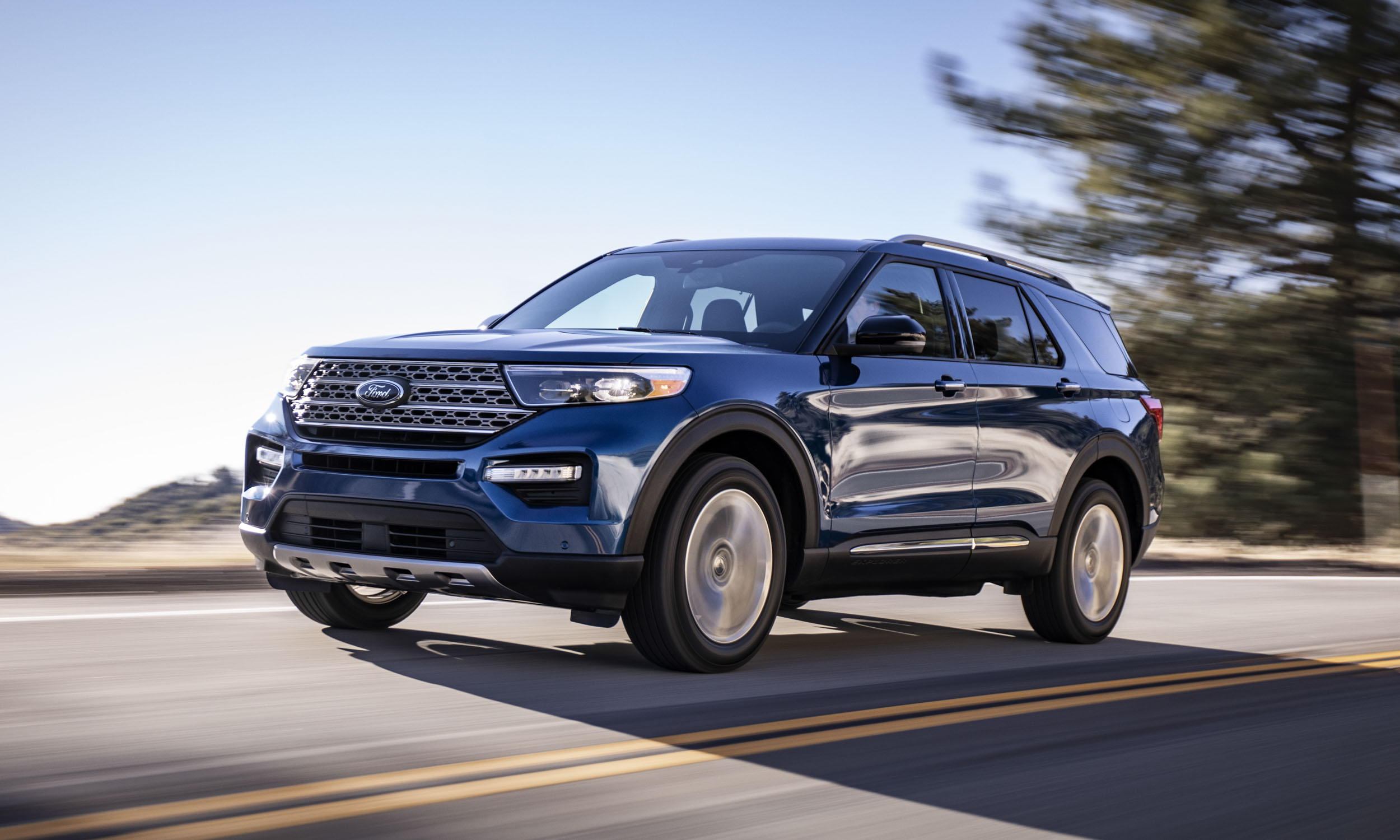