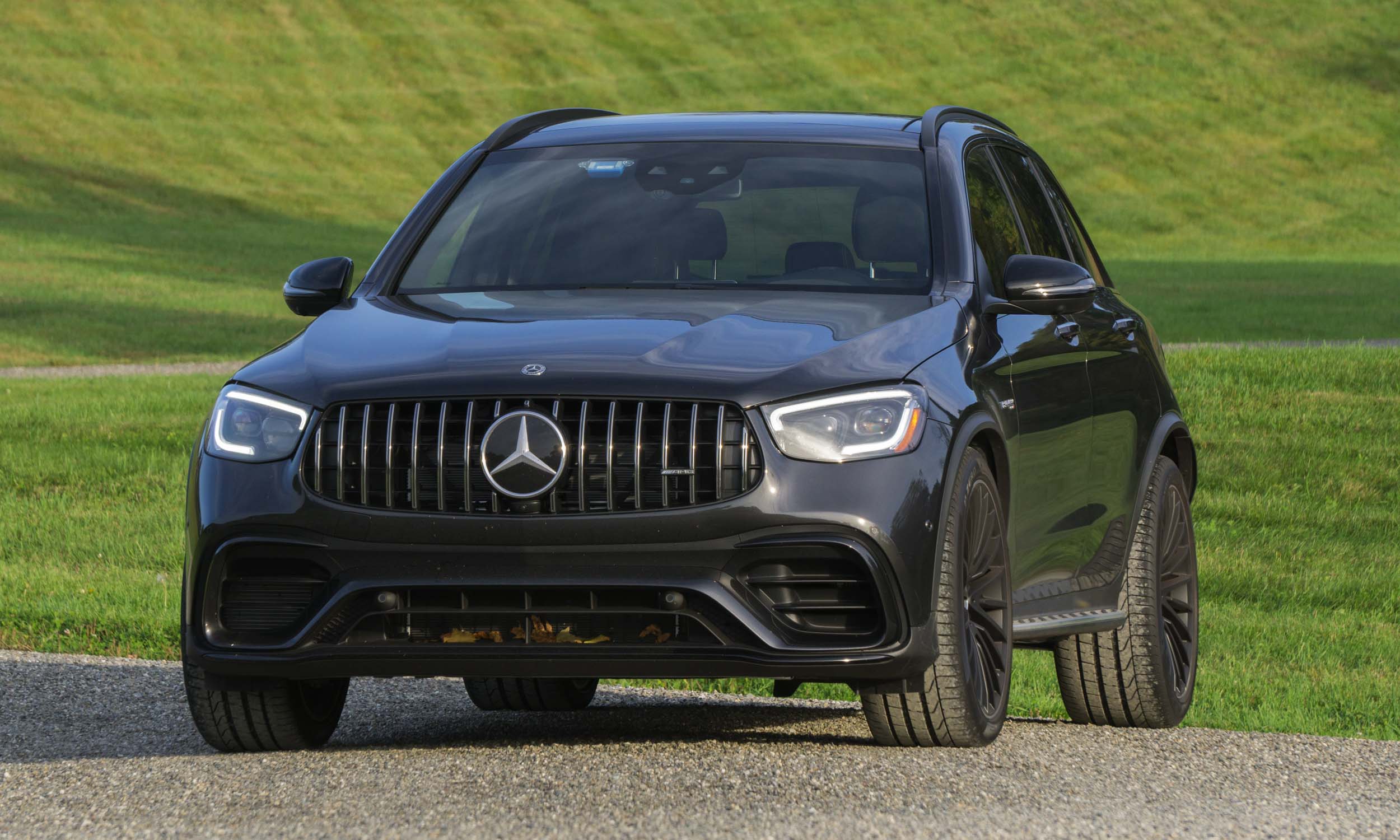 Best-Seller
The crossover continues to reign supreme across America and so too at Mercedes-Benz, where the best-selling model by far is the GLC. The German automaker is hoping to build on that momentum with the introduction of the revised 2020 Mercedes-Benz GLC. With updated styling, innovative technology and a very powerful AMG variant, the new GLC is better than ever before. 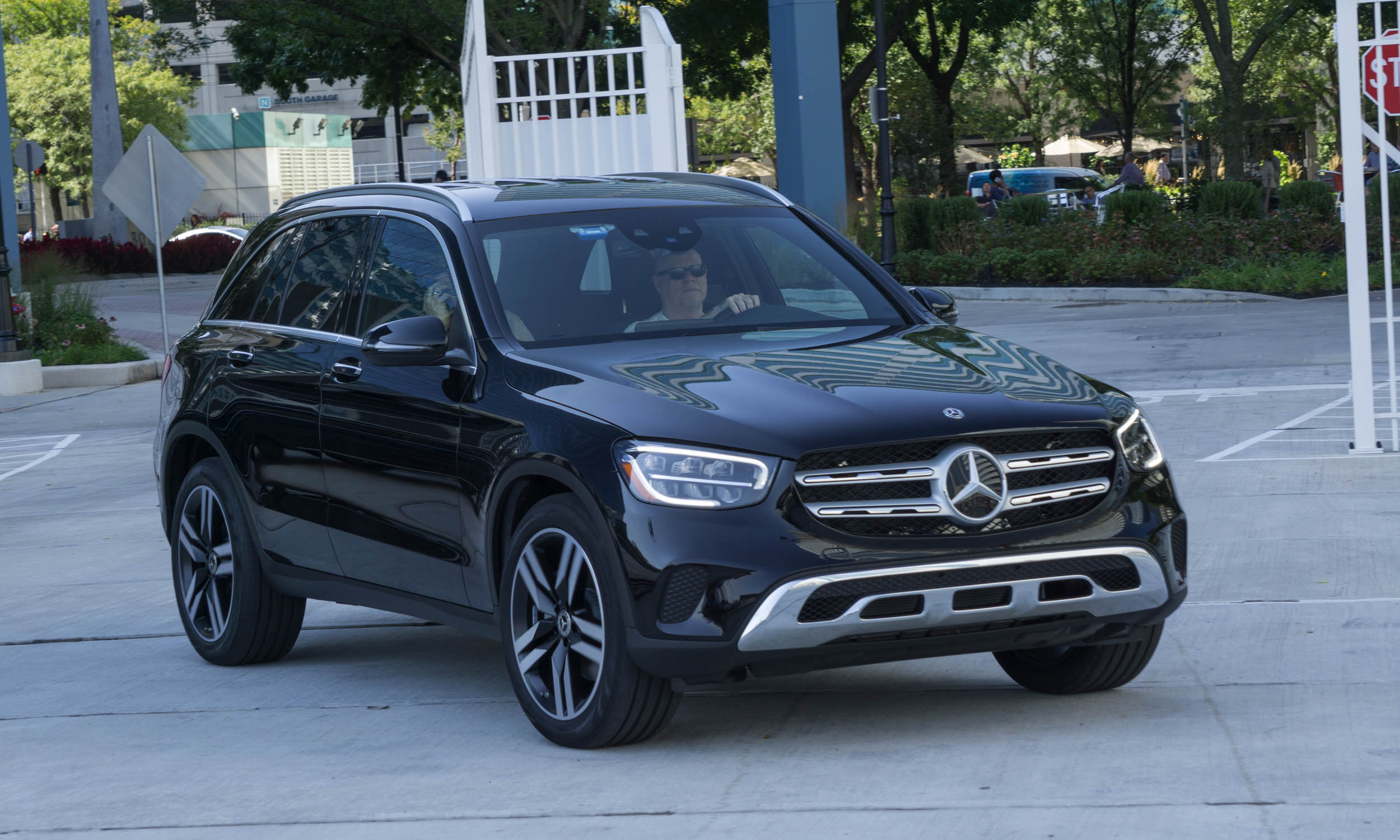 Fresh Look
While still easily recognizable as the Mercedes-Benz GLC, the 2020 model did receive some styling updates. Most noticeable are the new grille, updated front and rear fascia, slimmer headlights and redesigned taillights. 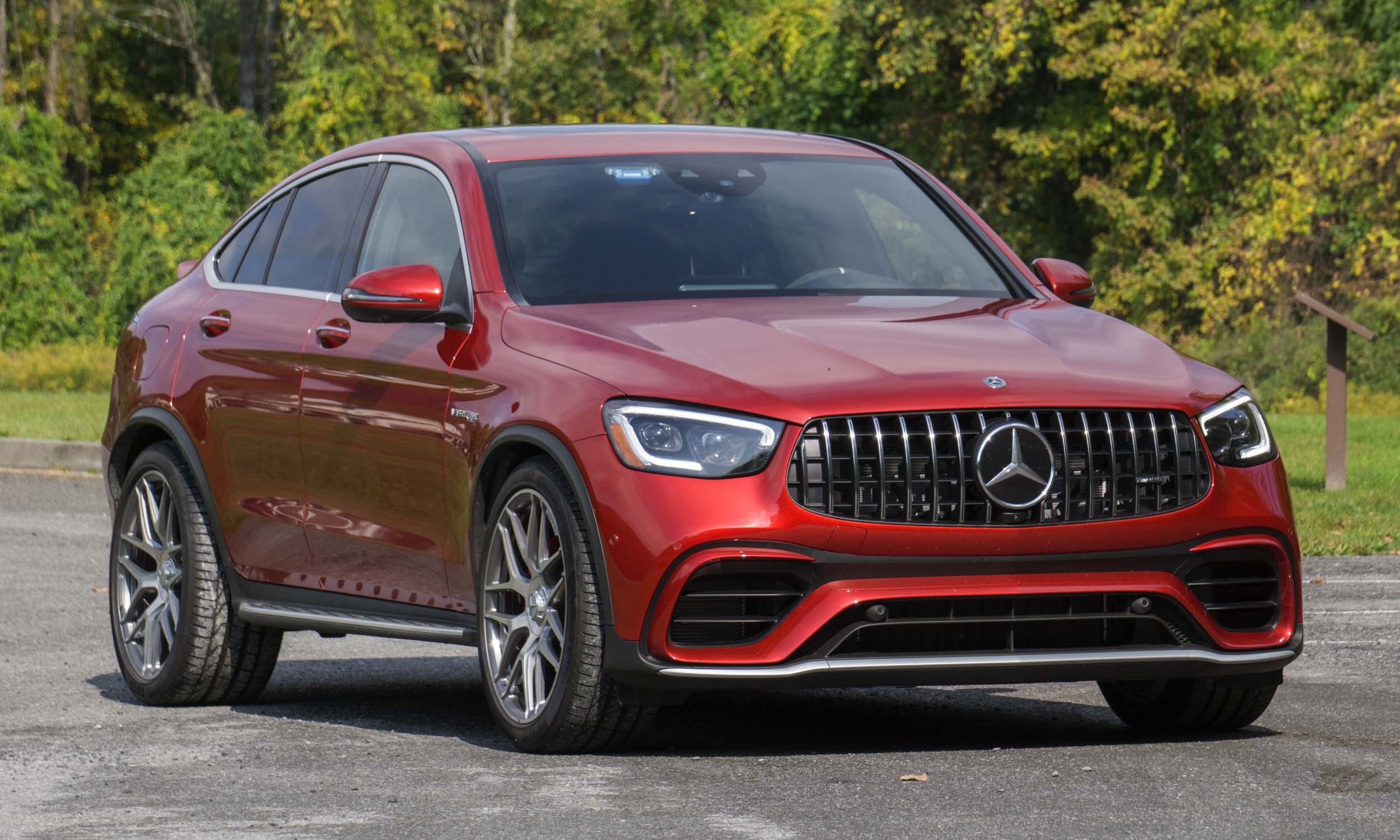 AMG Styling
A product of AMG — the high-performance division of Mercedes-Benz and wholly-owned subsidiary of Daimler AG — the AMG GLC 63 and GLC 63 S easily stand out from the standard GLC with an AMG-specific grille, as well as larger air intakes and front splitter, all giving the AMG a more aggressive stance. Side sill panels and bolder wheel arches add to the powerful stance — an integrated rear spoiler completes the look. 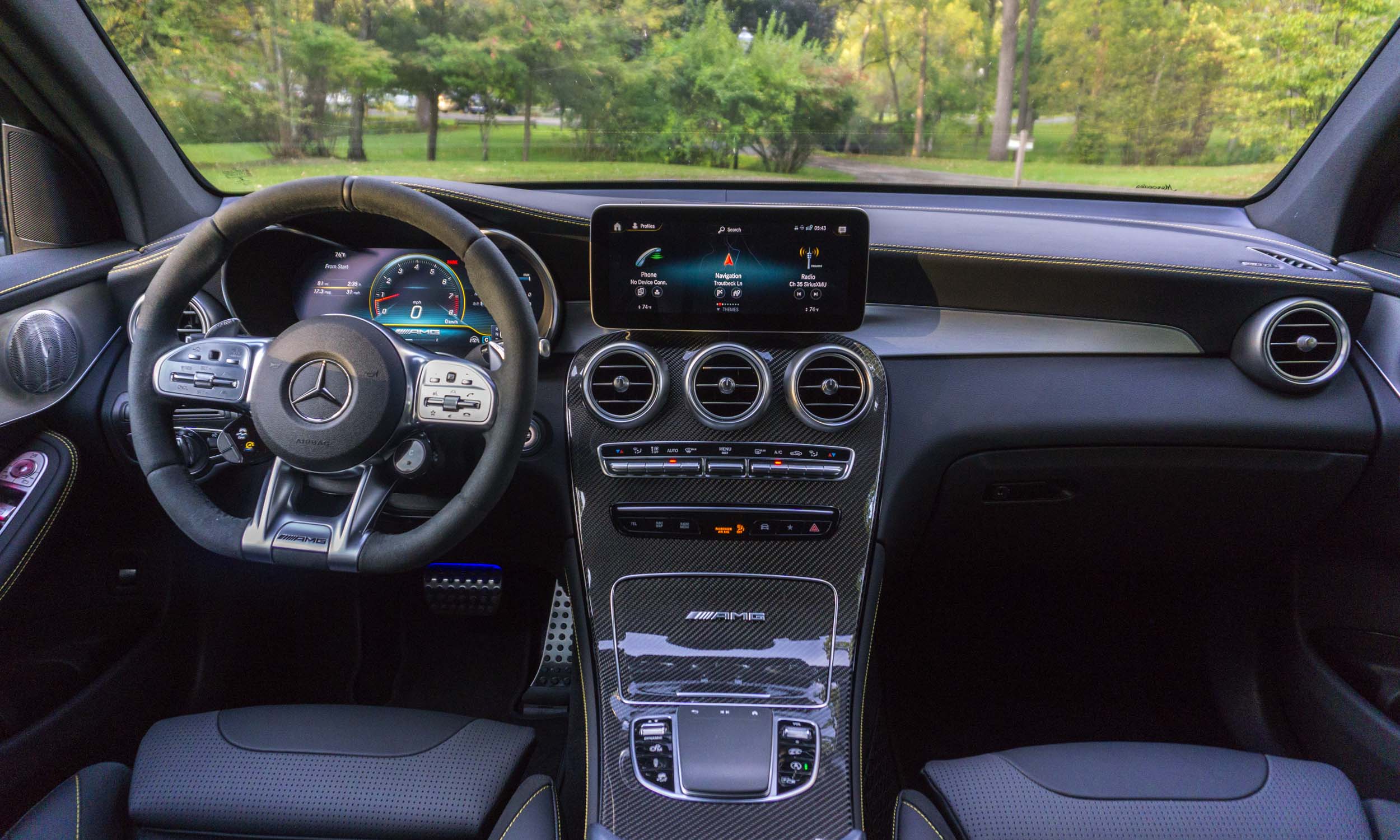 Model Lineup
The 2020 Mercedes-Benz GLC is available in two bodystyles: SUV and Coupe. Both can be had as the GLC 300 or the AMG GLC 63 at this time; a GLC 43 will arrive later this year, followed next year by the GLC 350e plug-in hybrid. 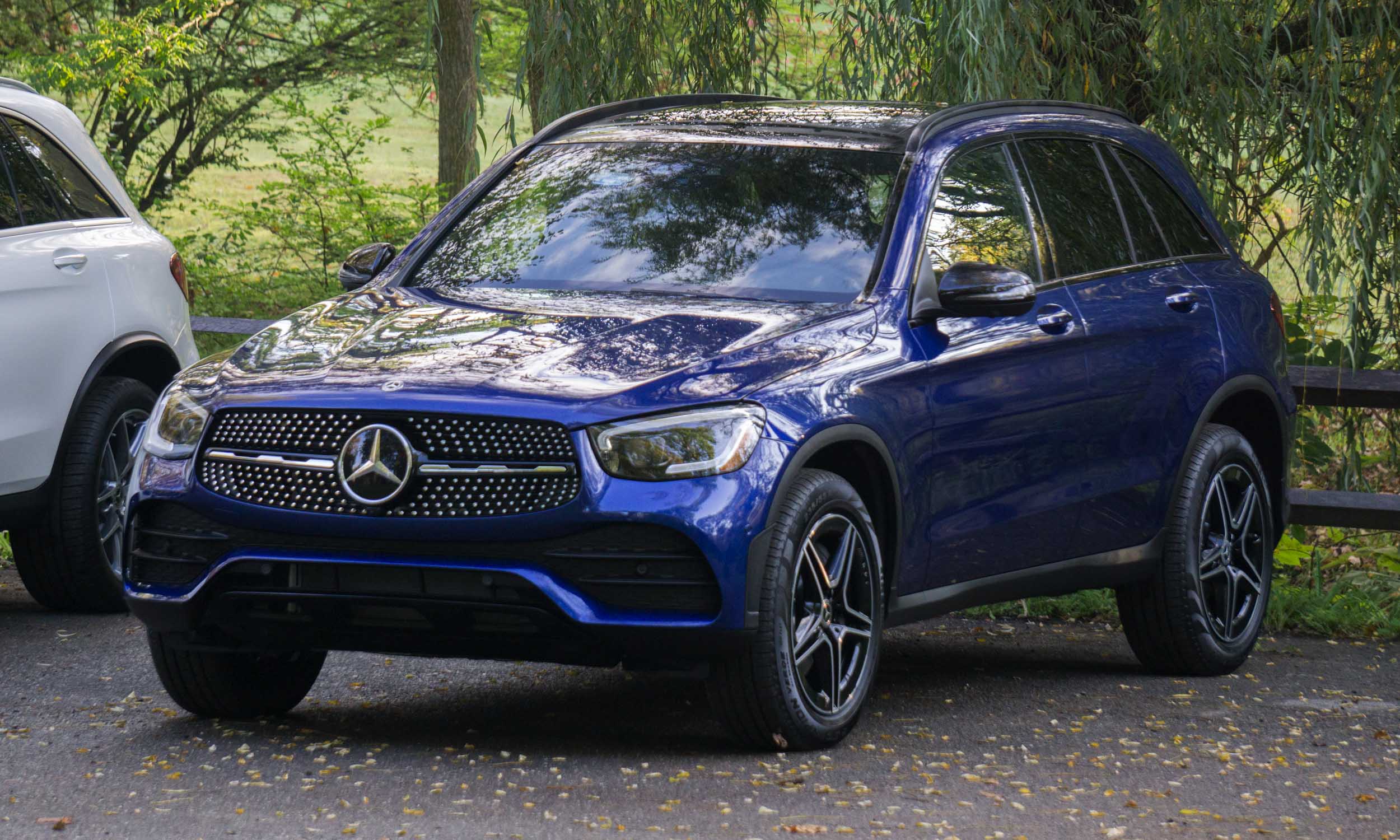 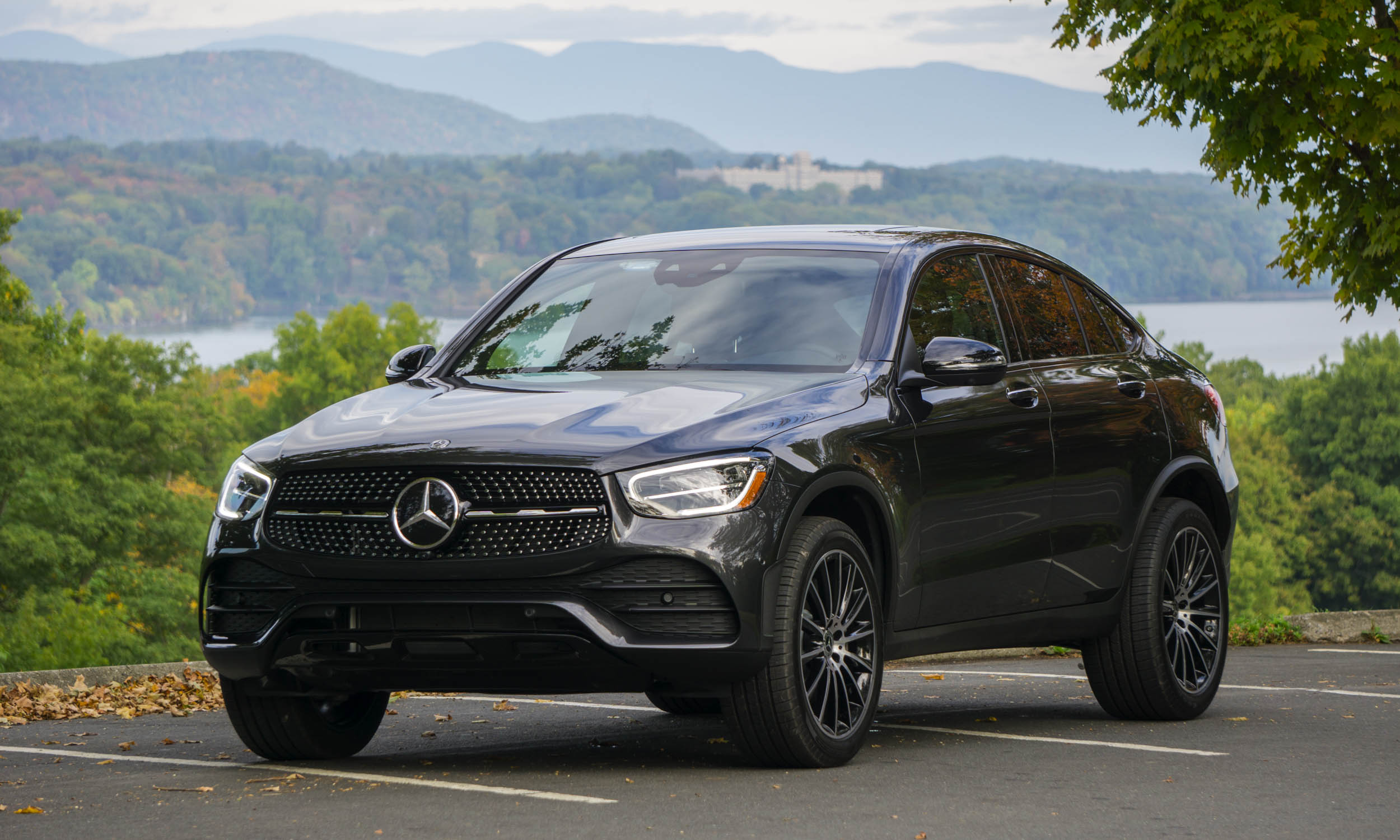 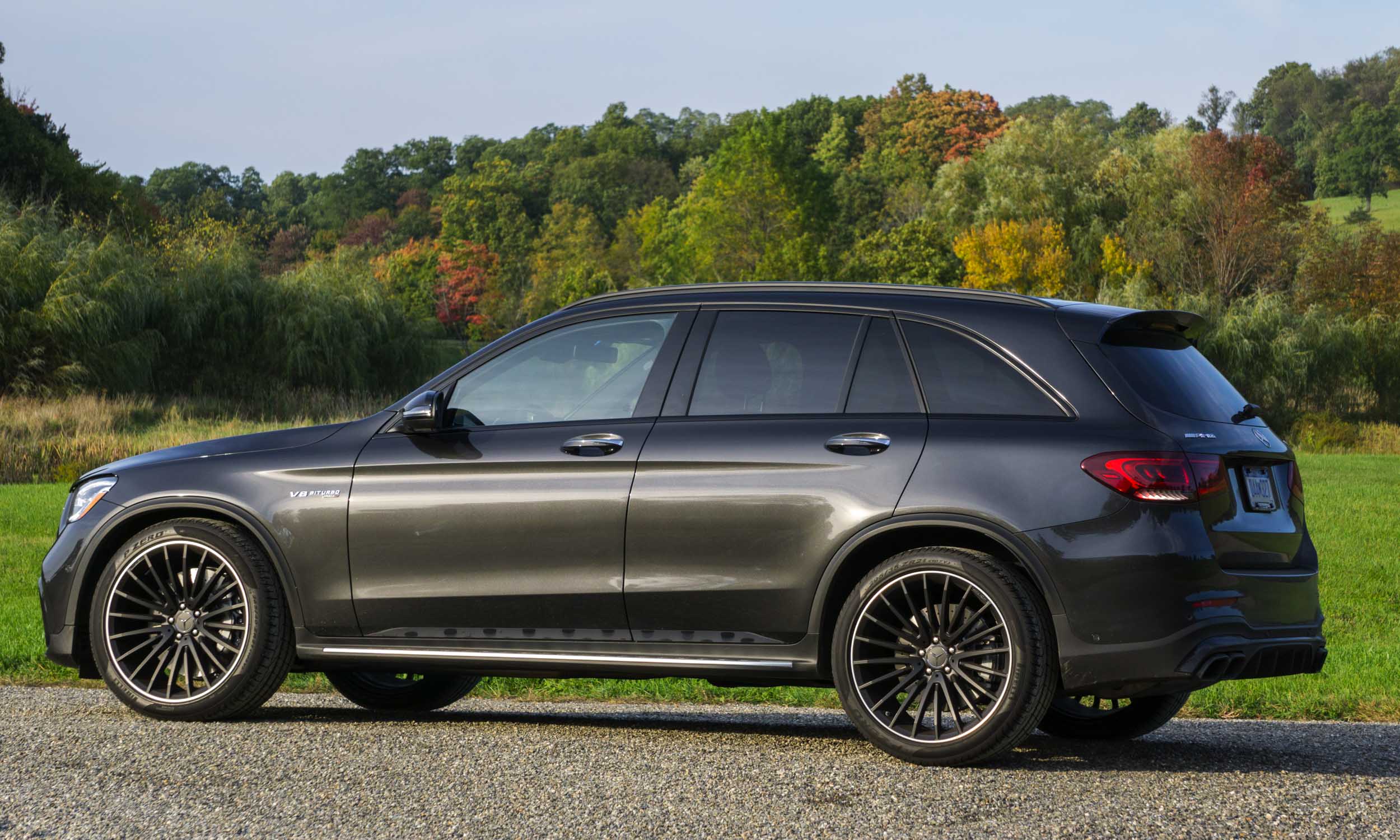 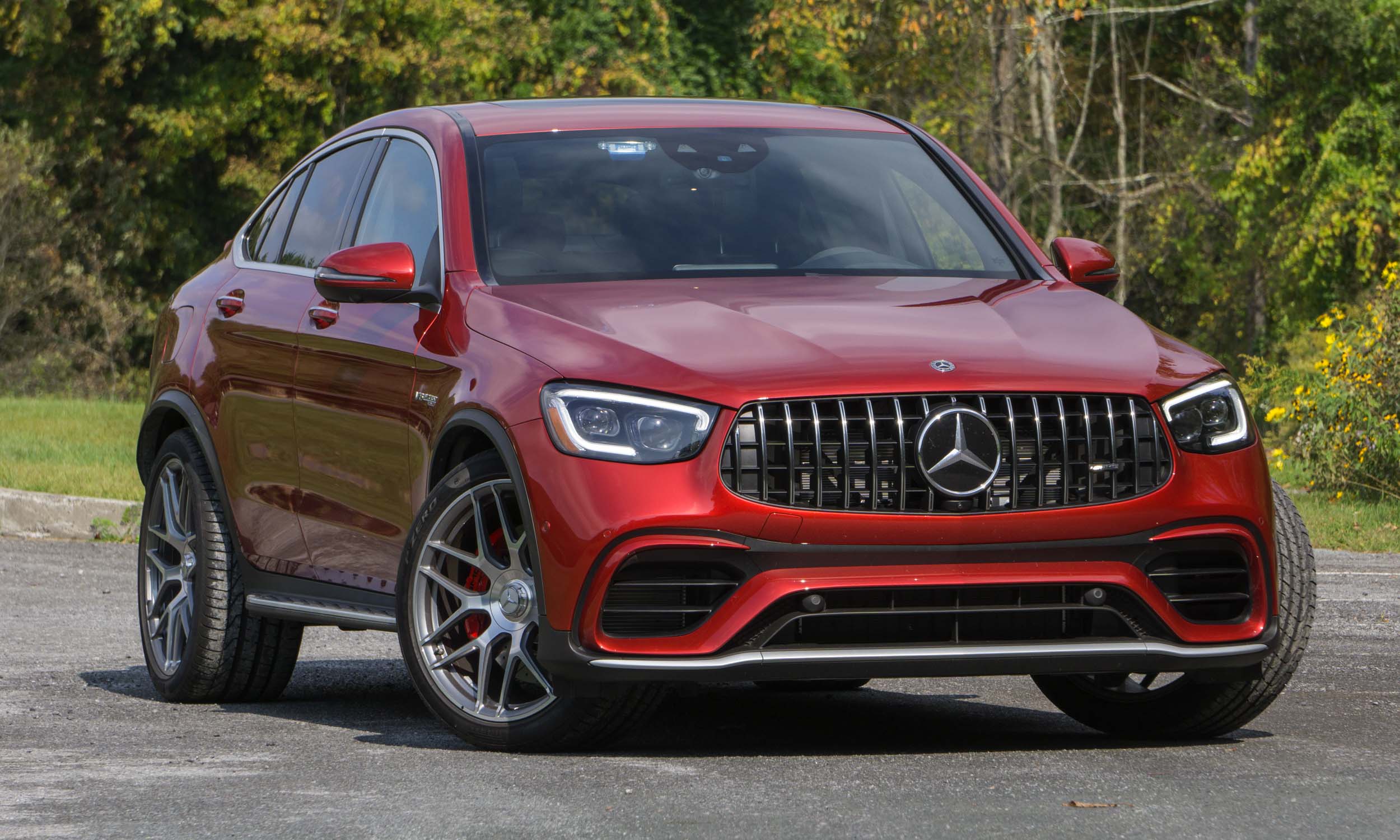 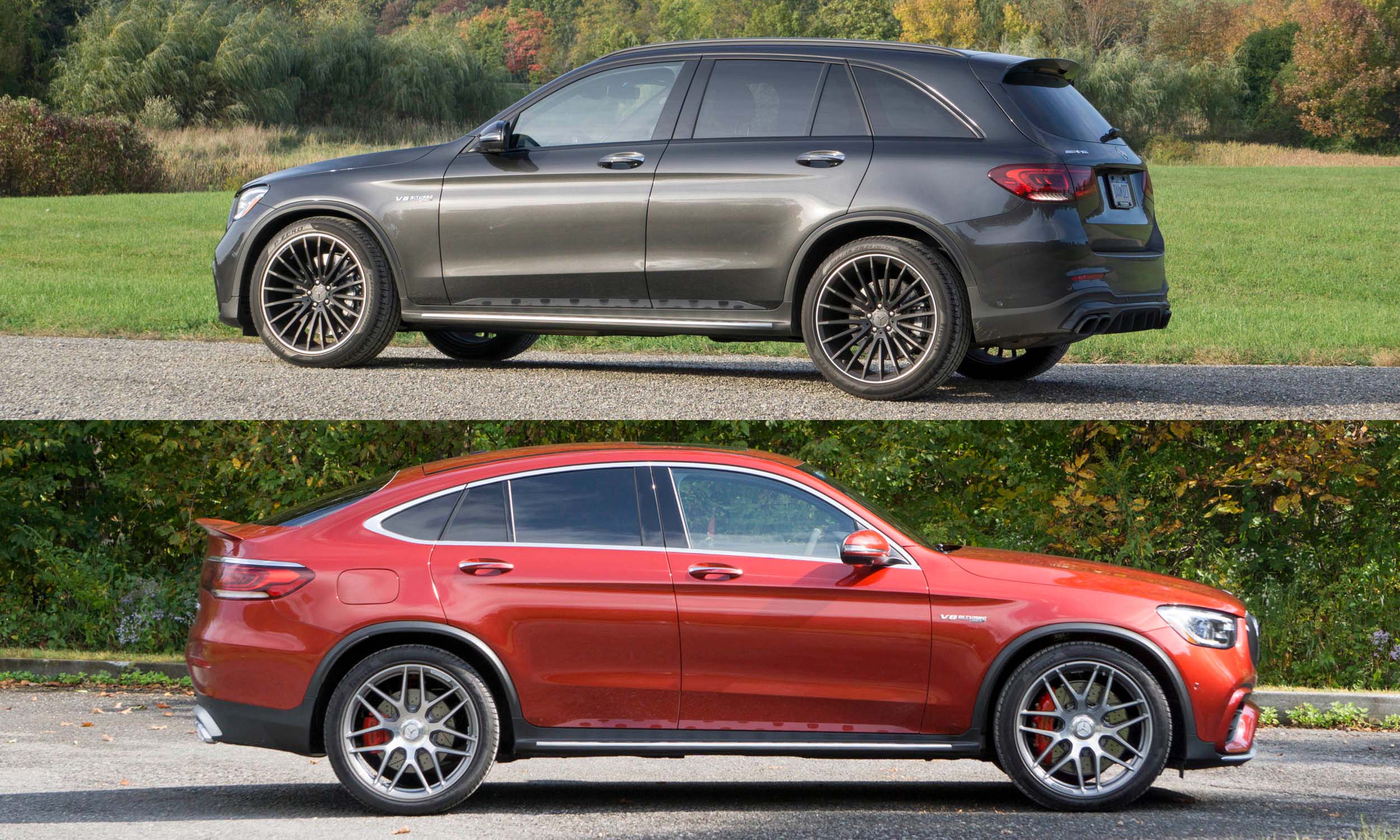 SUV vs. Coupe
Under the skin of these two variants there isn’t much difference — the choice between SUV and Coupe is primarily aesthetic. While the Coupe does offer a sportier stance, we prefer the utility and styling of the SUV. In addition to providing a roomier interior with more cargo space, the SUV is lighter and less expensive. The only issue with this argument is that the more powerful GLC 63 S is only available as a coupe. 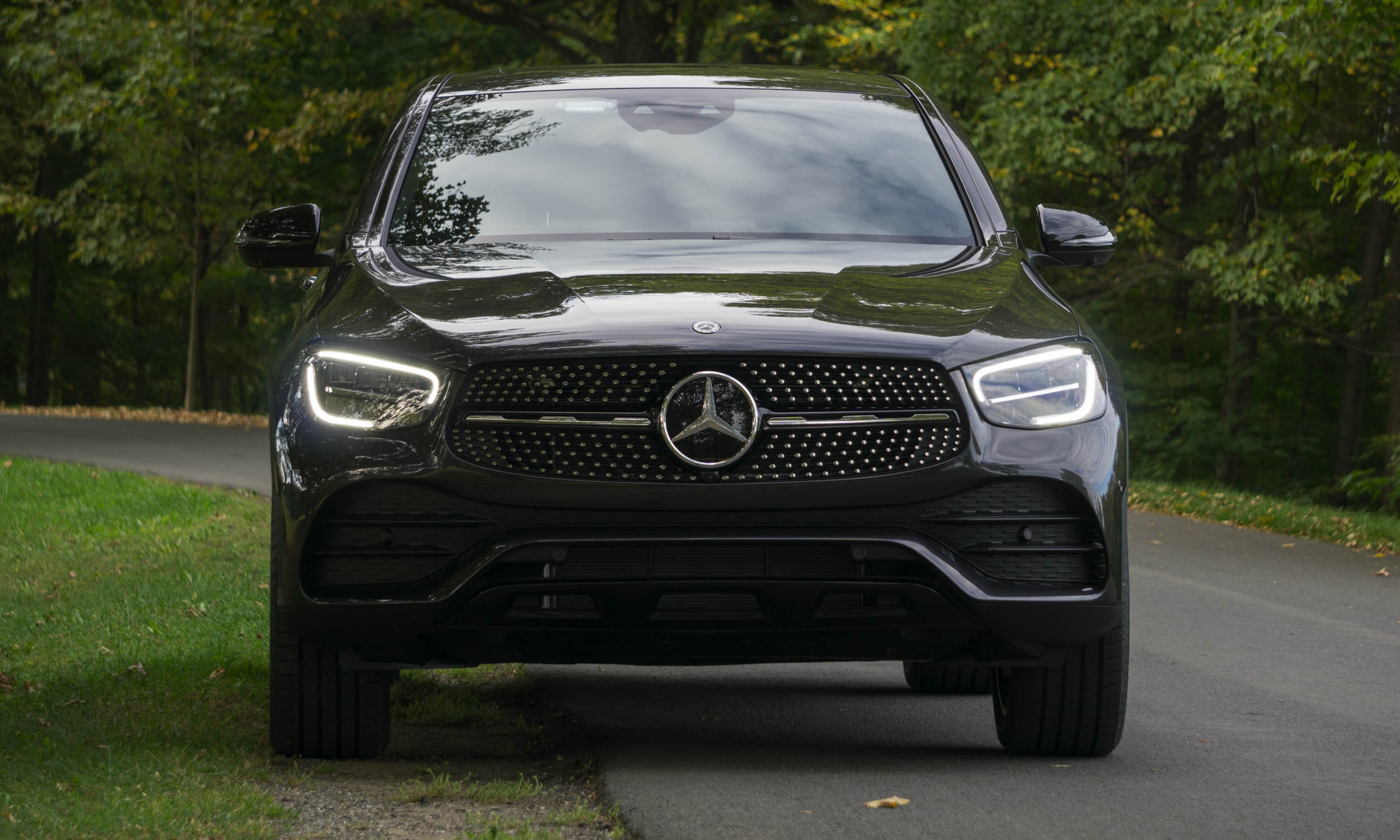 Under the Hood
Both the GLC 300 Coupe and SUV are equipped with a 2.0-liter turbocharged inline 4-cylinder engine producing 255 horsepower and 273 lb-ft of torque. This is an increase of 14 horsepower over the outgoing model which makes it slightly quicker — the sprint to 60 mph takes 6.1 seconds, a few tenths less than before. 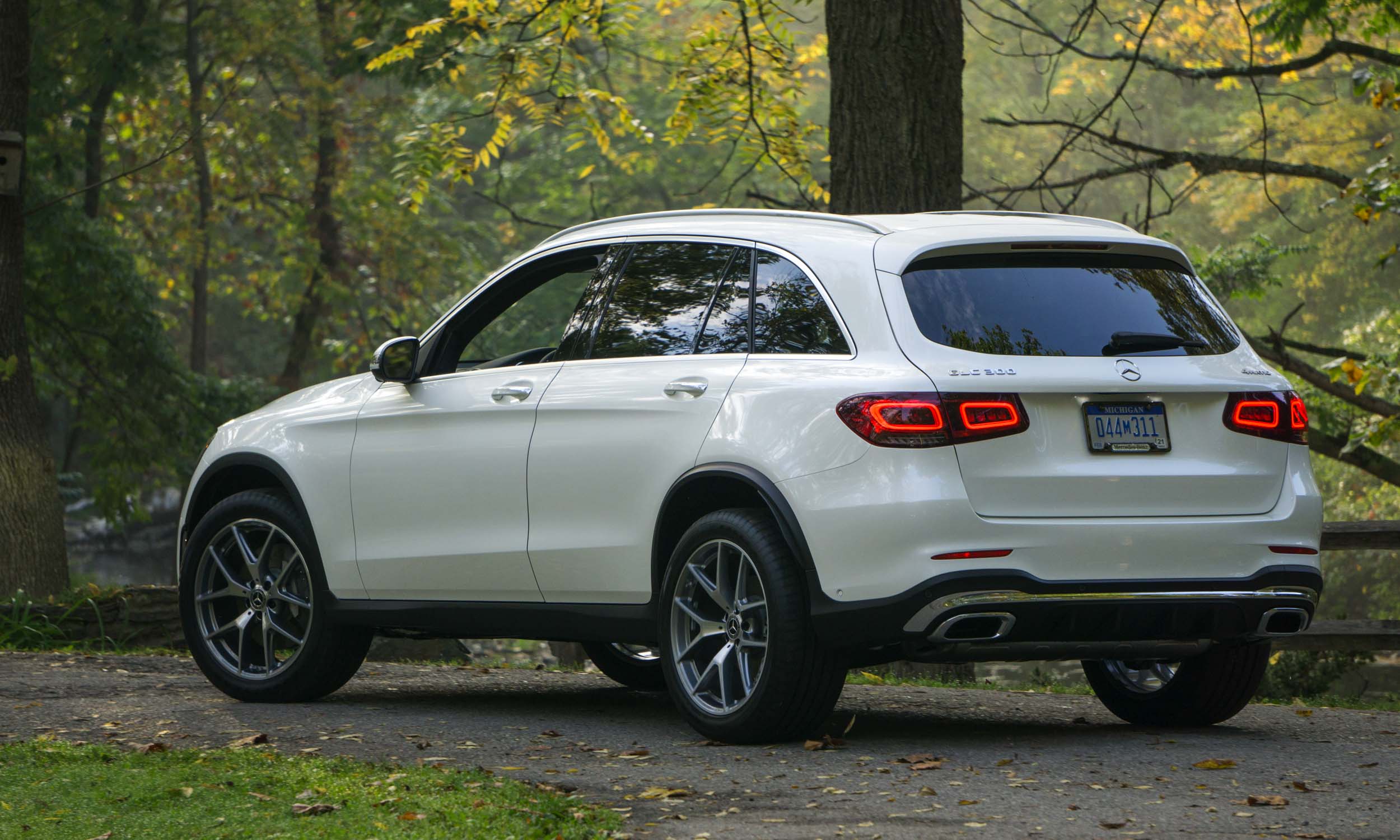 Fuel Efficient
The GLC 300 is equipped with a 9G-TRONIC 9-speed automatic transmission that delivers a respectable 22 mpg city / 29 mpg hwy / 24 mpg combined. The 4MATIC versions lose just 1 mpg in city and highway ratings. During our drive through upstate New York, we averaged about 21 mpg, during some aggressive driving. 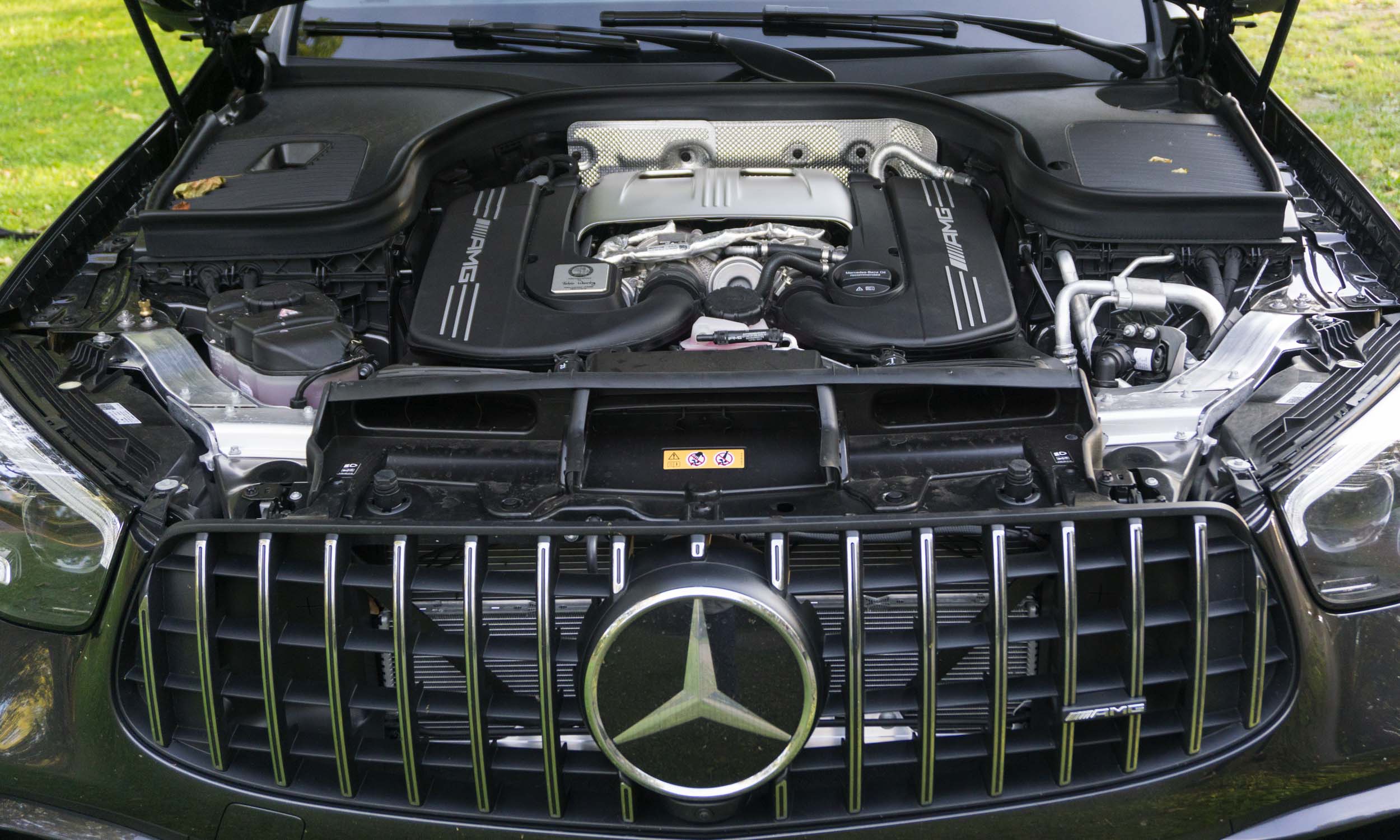 AMG Power
While the GLC 300 will be the volume model, it’s the AMG GLC 63 that brings the excitement. Behind that iconic AMG grille is a hand-built AMG 4.0-liter biturbo V8 engine generating 469 horsepower and 479 lb-ft of torque at a mere 1750 rpm. For a bit more excitement, there is the AMG 63 S that utilizes the same powerplant, but output is bumped up to 503 horsepower and 516 lb-ft of torque. 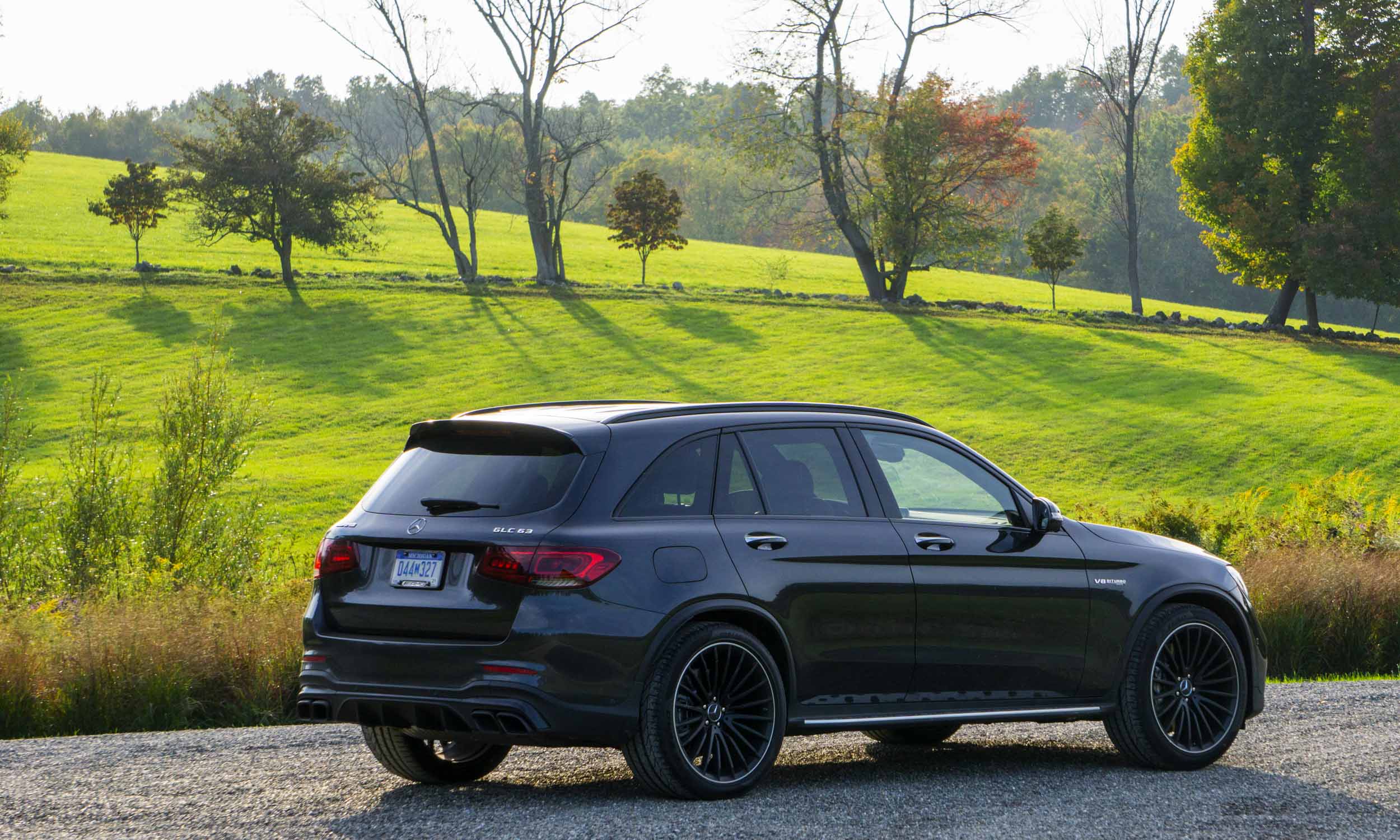 Performance
Power gets sent to the AMG Performance 4MATIC+ all-wheel-drive system with variable torque distribution via an AMG SPEEDSHIFT MCT 9-speed transmission. The excellent grip and quick-shifting transmission help the GLC 63 shoot to 60 mph in 3.8 seconds. The GLC 63 S completes the same task slightly quicker, in 3.6 seconds. For a bit of perspective, this is the same 0–60 mph time that the $300,000 V12-powered Mercedes-Benz SL65 Black Series achieved 10 years ago, and now it is performed by a 5-passenger SUV with a V8. 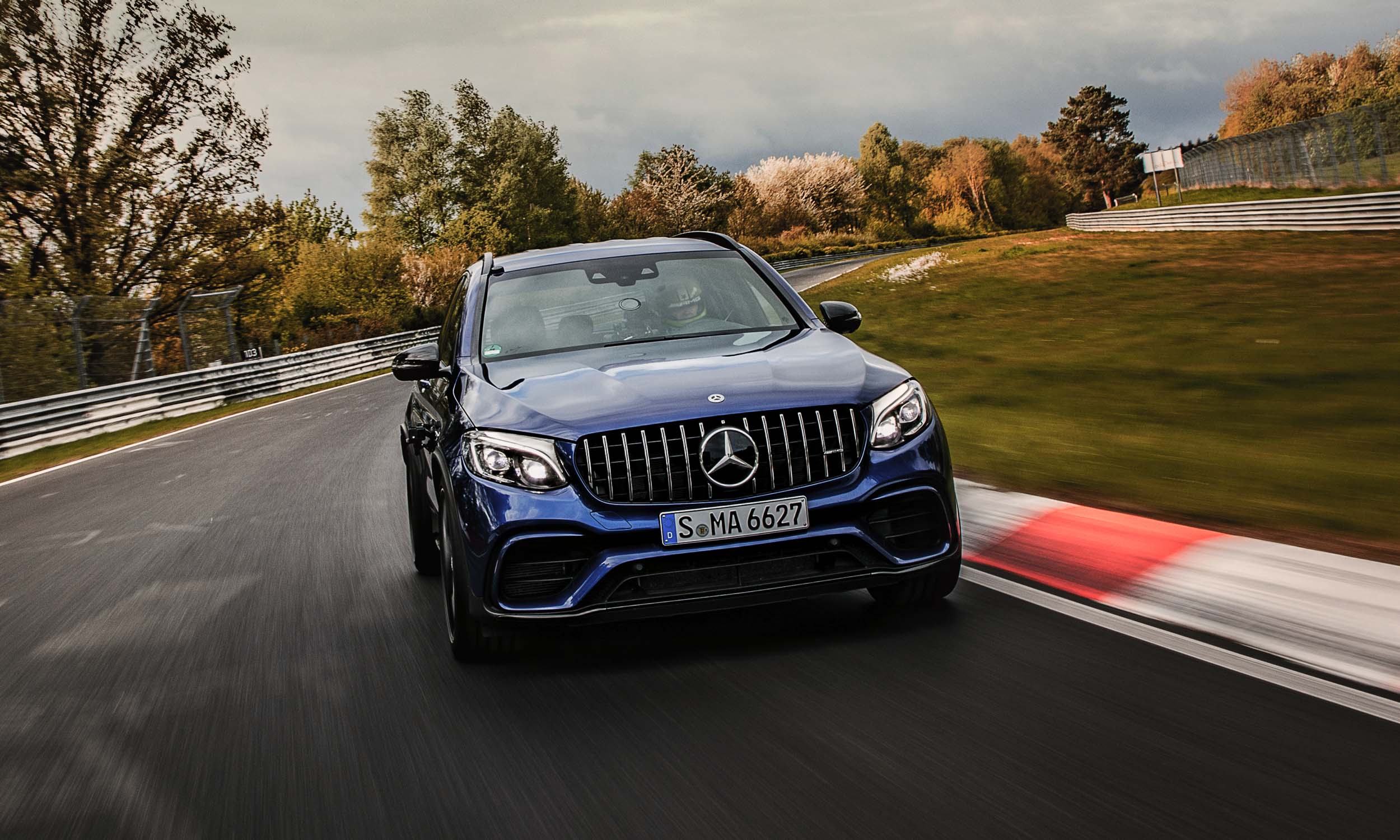 Fastest at the Nurburgring
With this new GLC, Mercedes-AMG was able to achieve the fastest time for an SUV around the Nordschleife, completing one circuit of the famous German racetrack in a shocking 7 minutes 49 seconds. This edged out the Alfa Rome Stelvio to take the record. It is interesting to note that the vehicle achieving that record was the GLC 63 S SUV . The SUV is lighter than the Coupe, but this variant will not be coming to America. 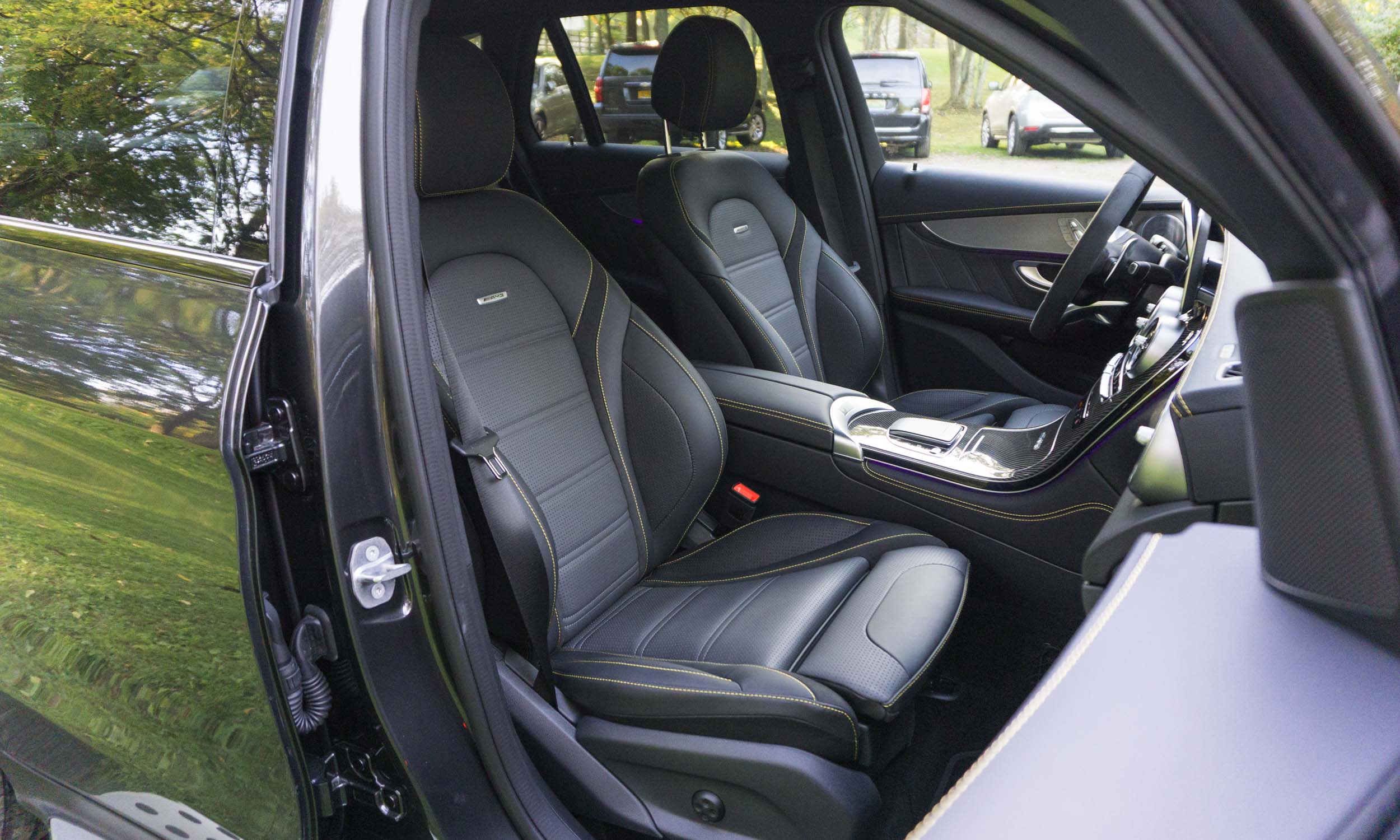 Inner Space
The Mercedes-Benz brand is synonymous with luxury, and while the GLC could be considered closer to the entry-level end of the full Mercedes lineup, it is still nicely appointed. The standard MB-Tex seat trim is stylish, as is the real wood trim; however, the optional leather would be preferred. AMG models have standard sport seats that provide better support and offer additional adjustments. 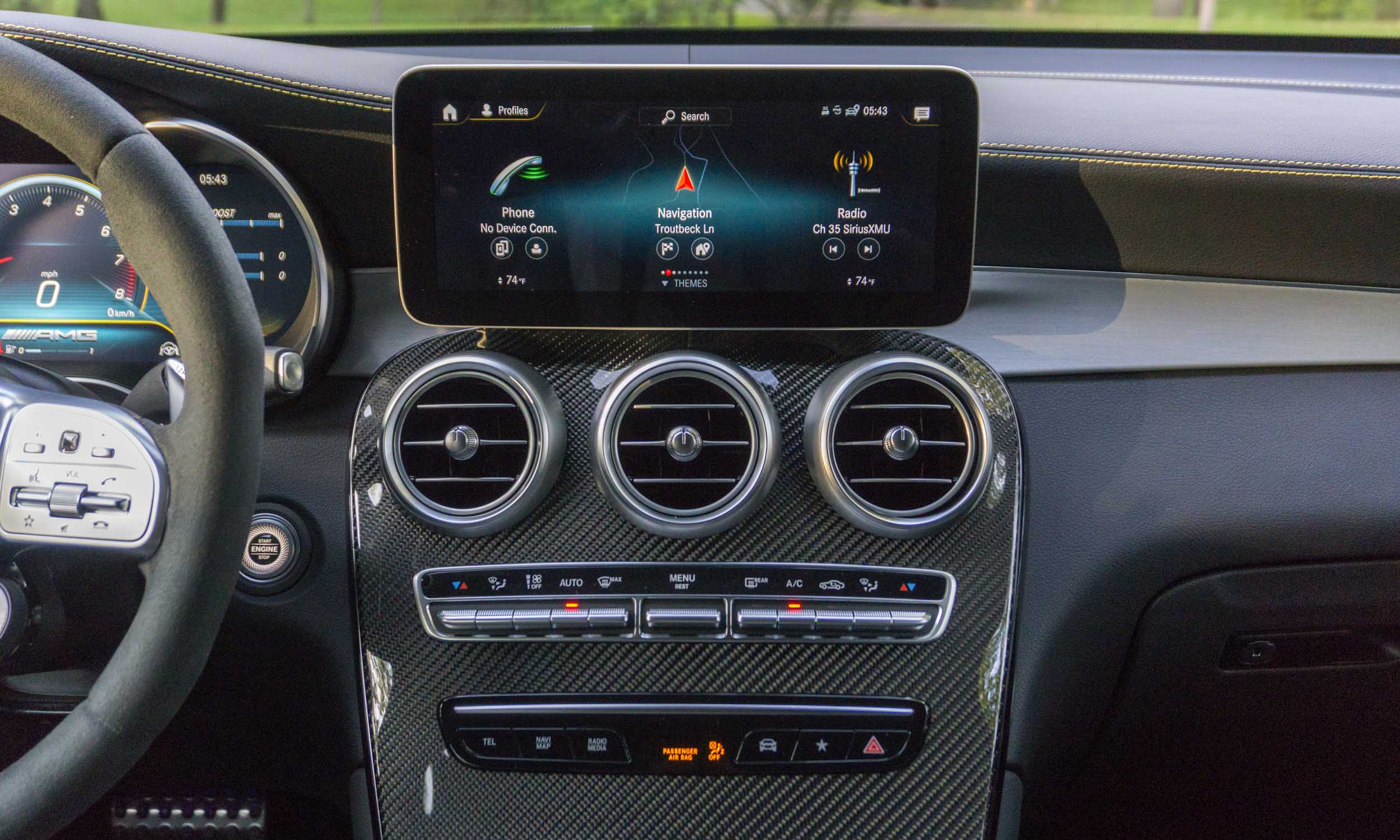 Big Screen
We like the big display screen that comes standard on the GLC; we prefer the integrated screen found on higher-end Mercedes models, but this one still works well. Control is via the touch screen, the touch pad in the center console or the small touch buttons on the steering wheel. Although the steering wheel controls work better than expected, we discovered the touchpad difficult to use while driving. That said, the GLC also has voice activation. 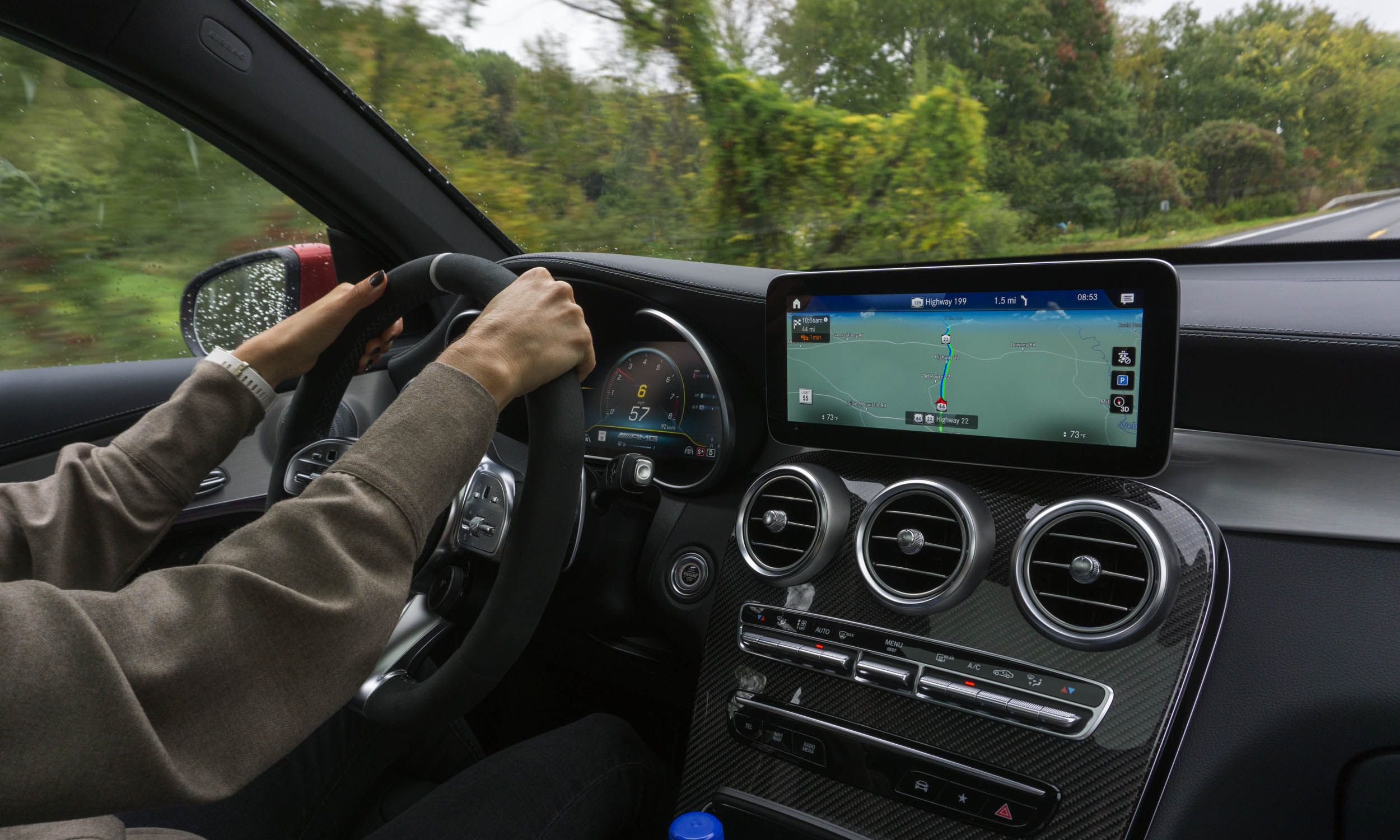 Hey Mercedes
With the 2020 GLC Mercedes-Benz introduces a new, voice interface to its vehicles across the board. Called MBUX, the innovative system is activated by saying “Hey Mercedes,” and is able to perform functions based on real language requests. For example, occupants can ask it to “find the closest Starbucks” and it will set a navigation route to the nearest Starbucks coffee outlet. 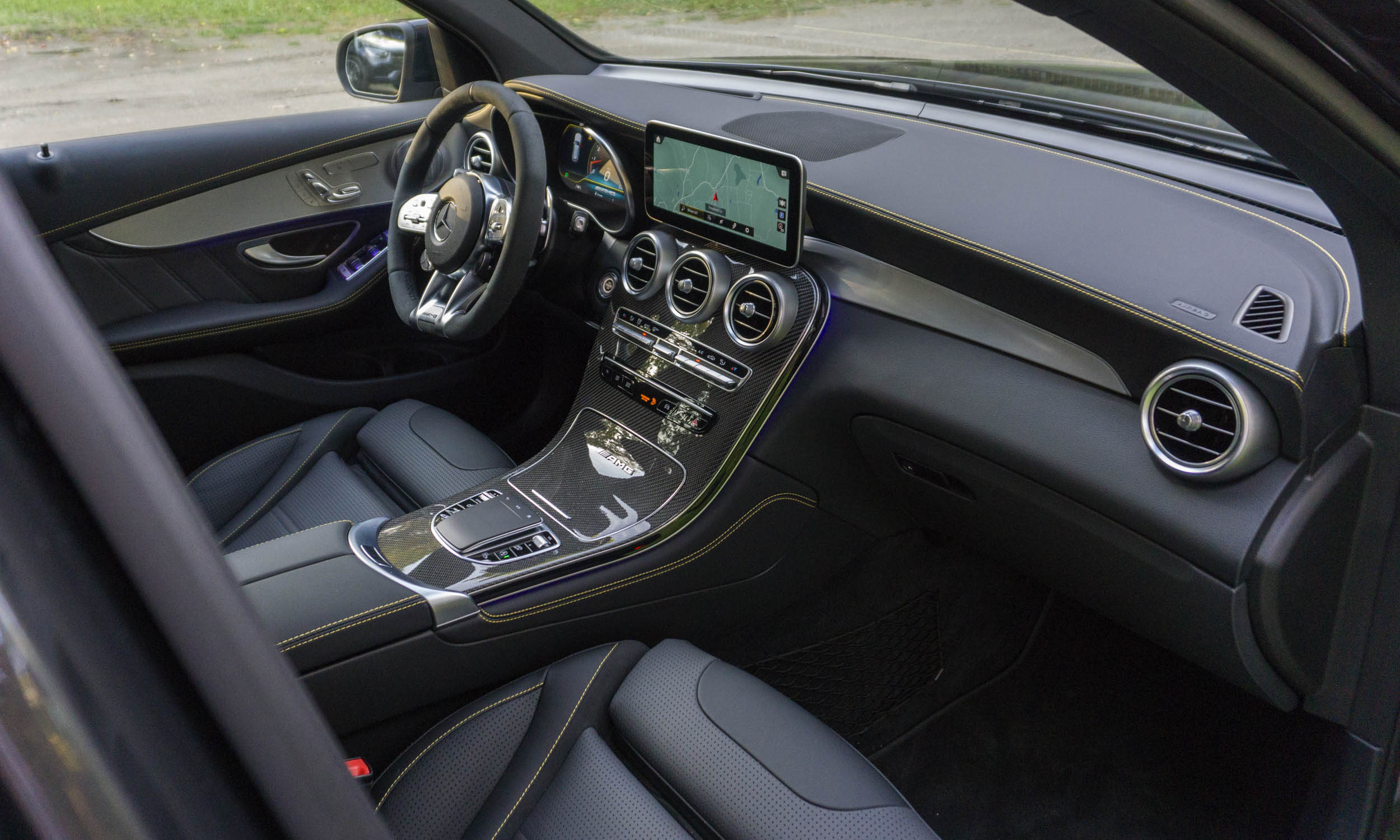 Interface That Interrupts
Our one complaint with the new voice activation: of someone happens to say the word “Mercedes,” the system responds by muting the audio and asking how it can help you. This happened several times during our press drive, to the point that we started referring to that German car company that starts with the letter M. It is possible to change the trigger word; however, MBUX will continue to interrupt if it hears that word. While we understand the cool technology of initiating a conversation with your car, it would seem that using a button to activate the system would be just as easy and less intrusive. 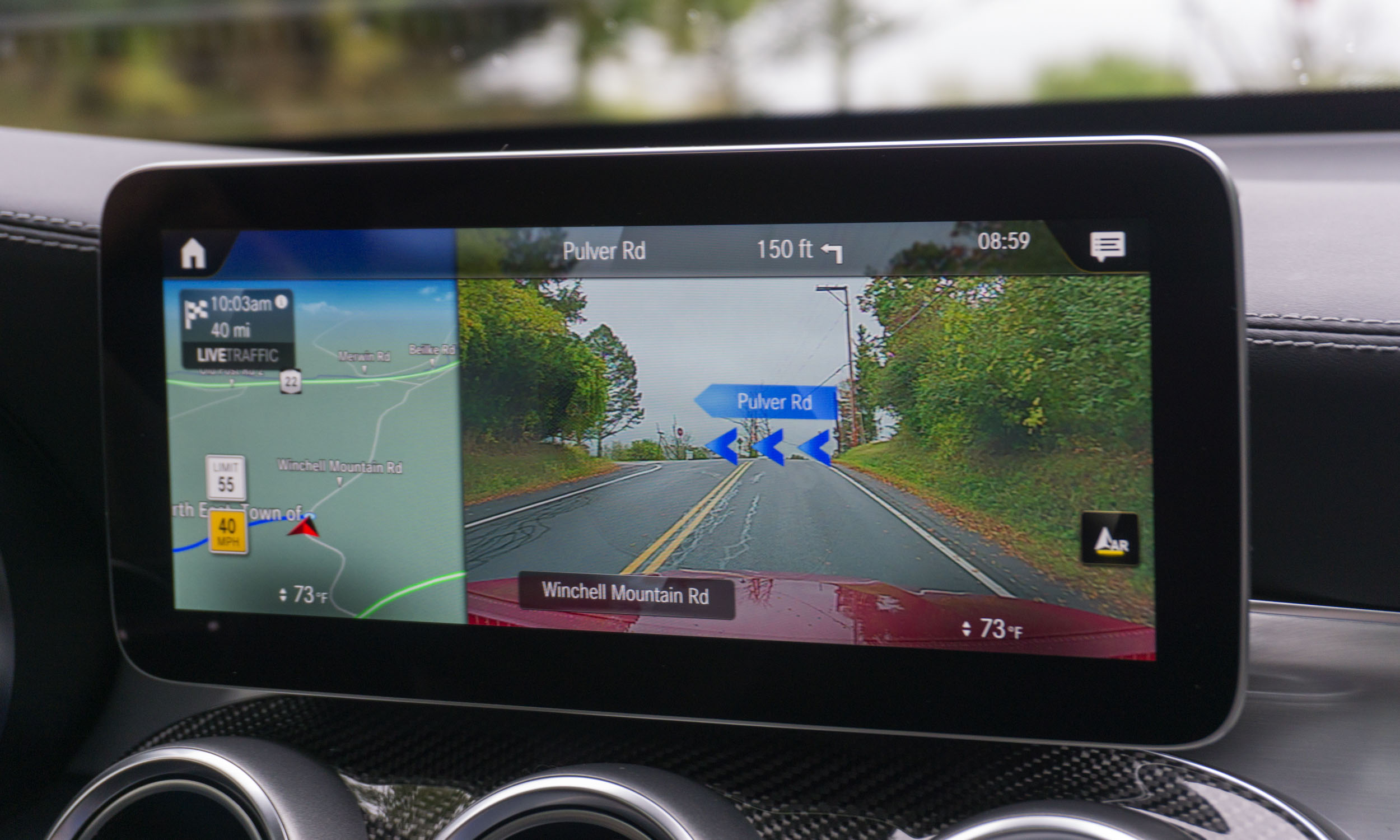 Augmented Navigation
A favorite new feature in the GLC is the Augmented Video for Navigation. As a turn is approaching on a programmed route, the forward-facing video camera activates and overlays navigation information to positively identify the next direction. This includes showing the street name hovering over the street along with arrows indicating the direction. The addition of the navigation information in the head-up display is also quite helpful.

Rear Seat
With easy ingress and egress, the rear seat of the 2020 GLC offers a decent amount of legroom and is quite comfortable for most adults. Even the middle seat is usable without too much crowding. The SUV does feel more spacious, mainly because it is — legroom remains the same, but headroom is more than an inch lower in the Coupe. 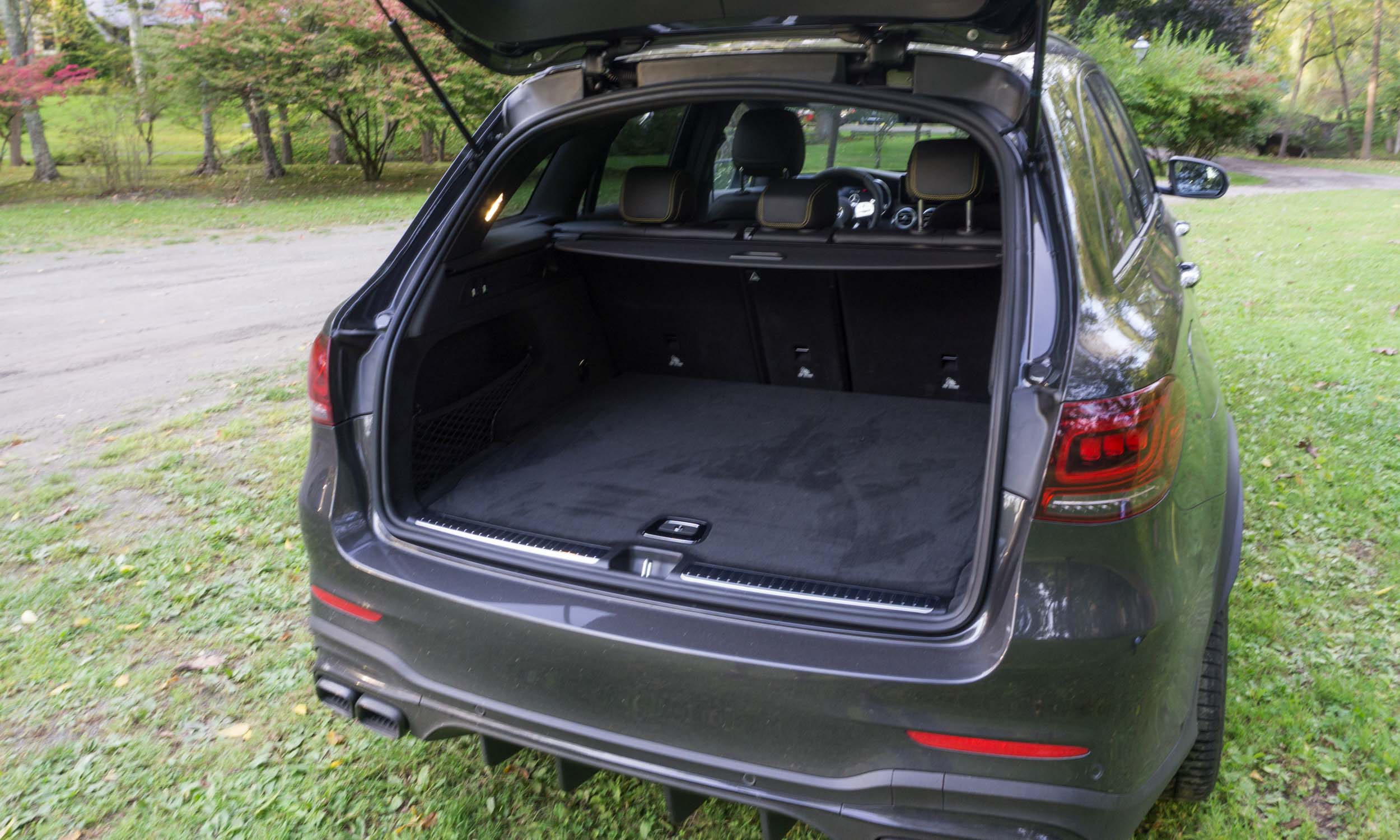 Cargo Space
The GLC SUV has a surprising amount of cargo space and easily handles several pieces of luggage. Rear seats can easily be folded for considerably more available space. As expected, the shape of the Coupe cuts into its cargo-carrying abilities. 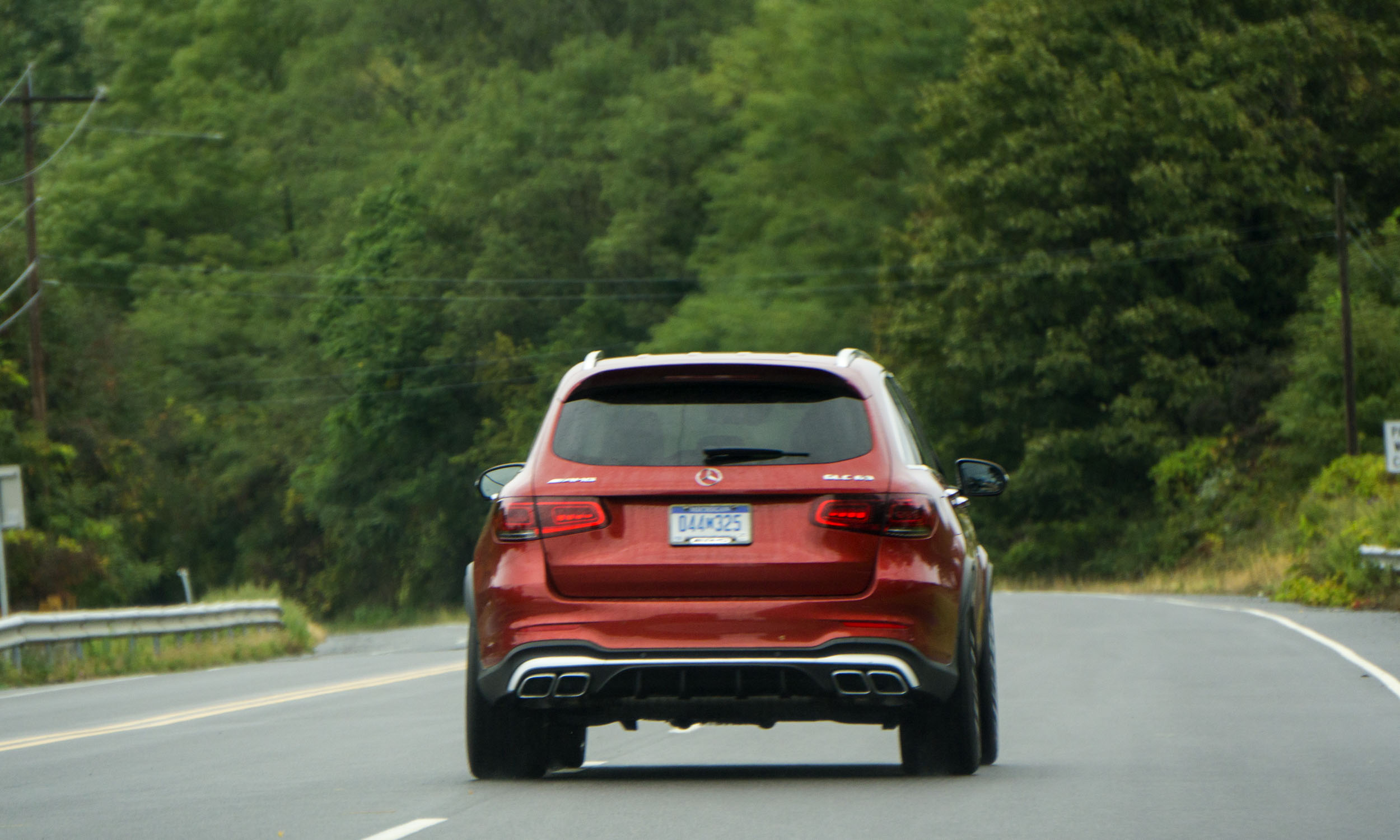 On the Road
Mercedes brought the journalists on our trip to upstate New York, where we had the opportunity to spend some time behind the wheel of the GLC 300 SUV and Coupe as well as the AMG GLC 63 SUV and AMG GLC 63 S Coupe. The SUV and Coupe are indistinguishable from behind the wheel, and we found that the GLC 300 provides more than adequate power and performance. Acceleration is fine, with smooth shifts from the 9-speed automatic. The ride is quite smooth under favorable road conditions; however, we were surprised to have the GLC skip across the lane when the road got rough at highway speeds. 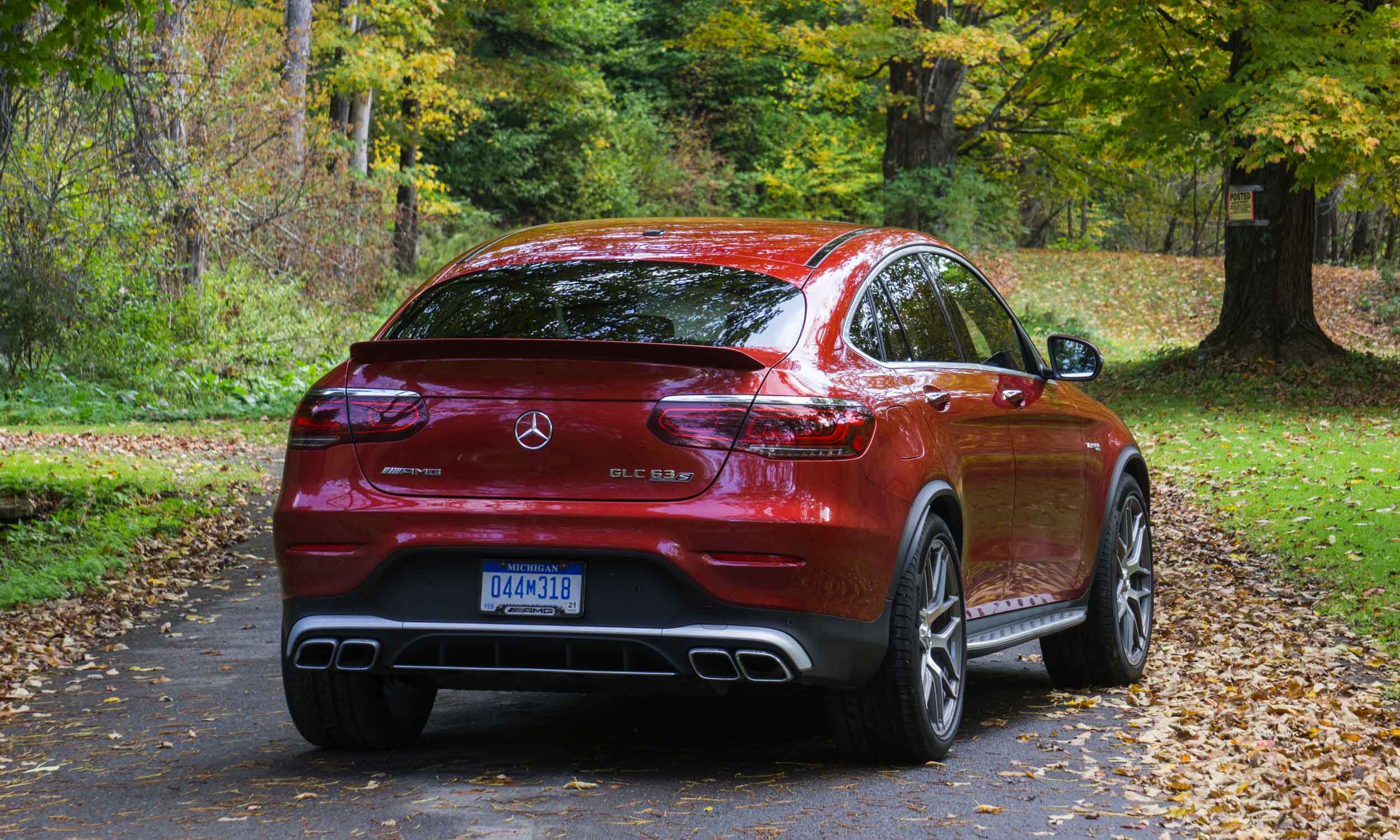 AMG Performance
The real stars in the GLC family — as expected — are the GLC 63 and 63 S. There is always plenty of power on tap with incredibly strong acceleration, even when already traveling at highway speeds. Handling is more like that of a sports car, staying flat with excellent feedback on the winding roads in New York’s Catskills. Then there’s the amazing exhaust note from the big V8 that never gets old, always putting a smile across the face. While the GLC63 S Coupe brought more power to the road, in most driving conditions it would be difficult to differentiate the two. Both are outrageously quick and great fun to drive. 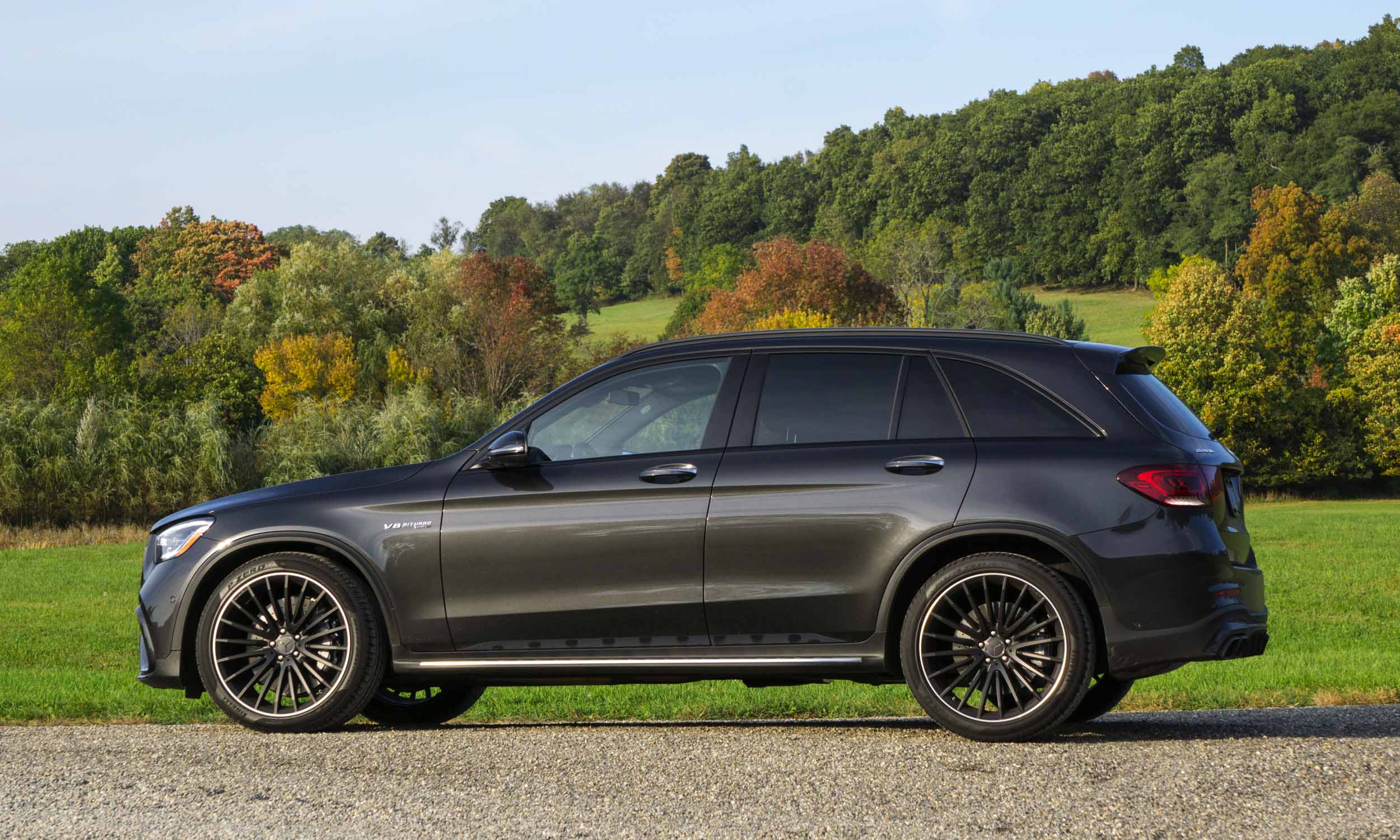 Right for You?
Consumers shopping Mercedes-Benz expect the German automaker to provide a luxurious and versatile ride, and the new GLC certainly doesn’t disappoint. The GLC 300 is a great value, offering a premium interior within an SUV with excellent driving dynamics. And for those who wish they could drive a sports car but need an SUV, the AMG GLC 63 and 63 S blend those two needs into a stylish vehicle with plenty of utility and all the performance most would need. Thanks to the improvements implemented for the 2020 model year, there’s no doubt the GLC will continue to be the best-selling model in the Mercedes-Benz lineup. 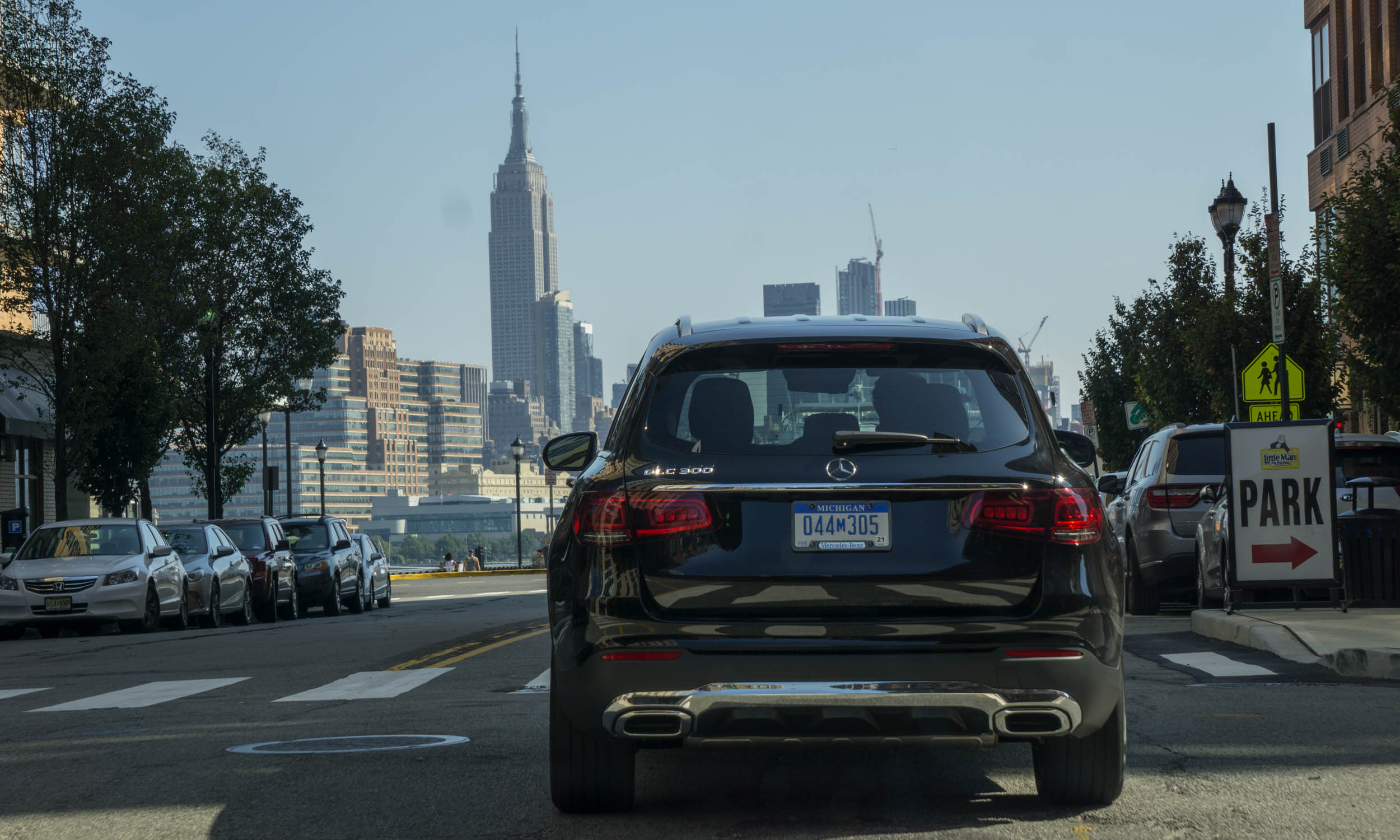 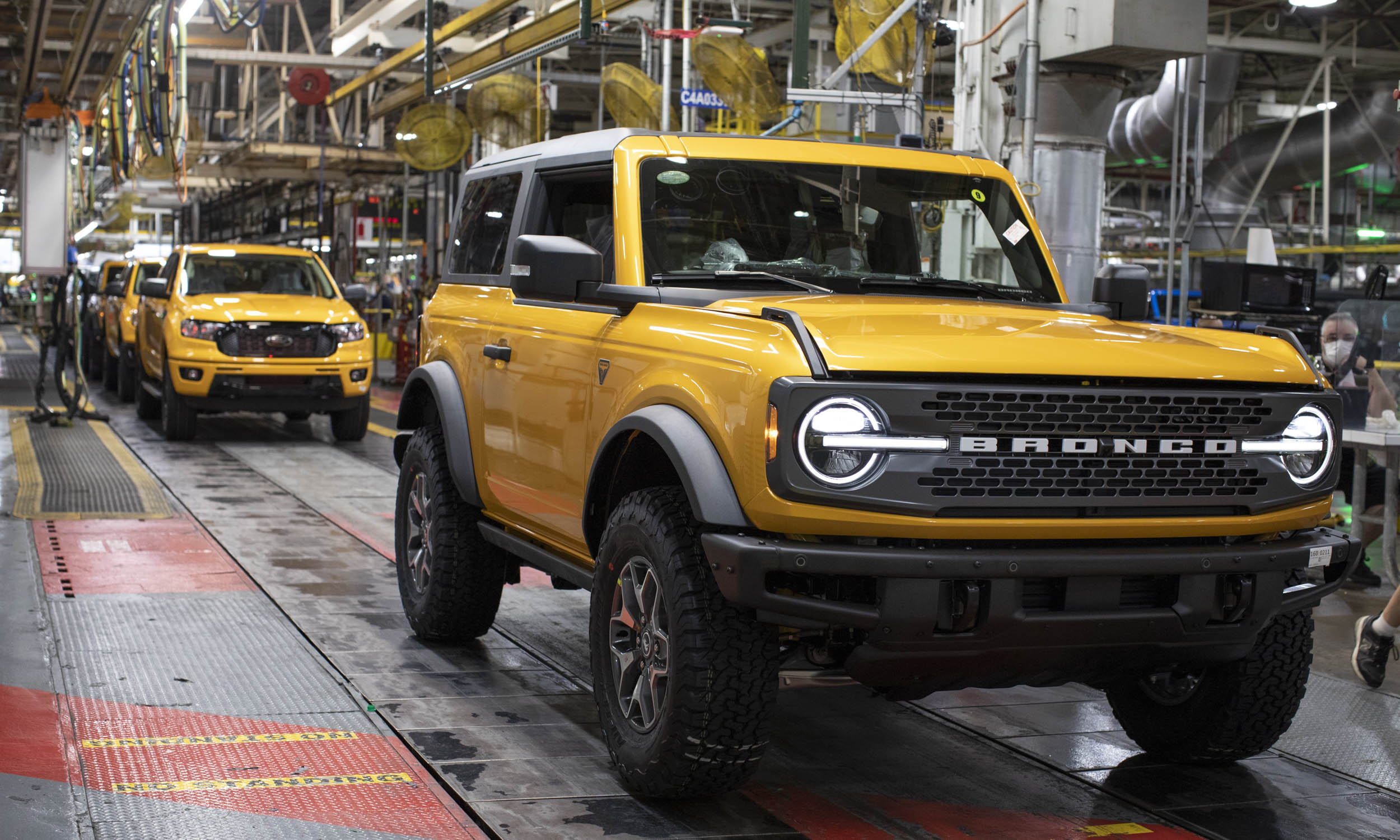 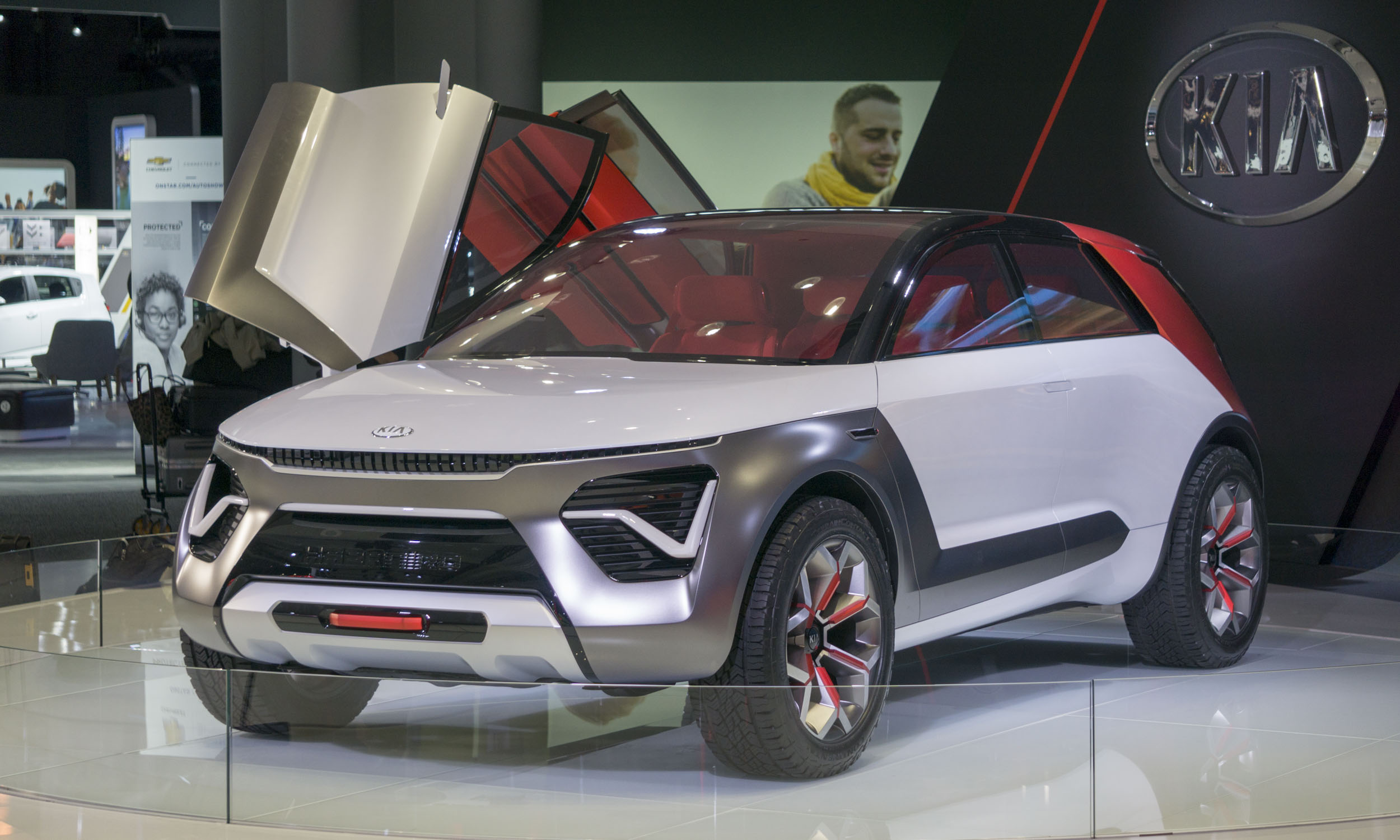