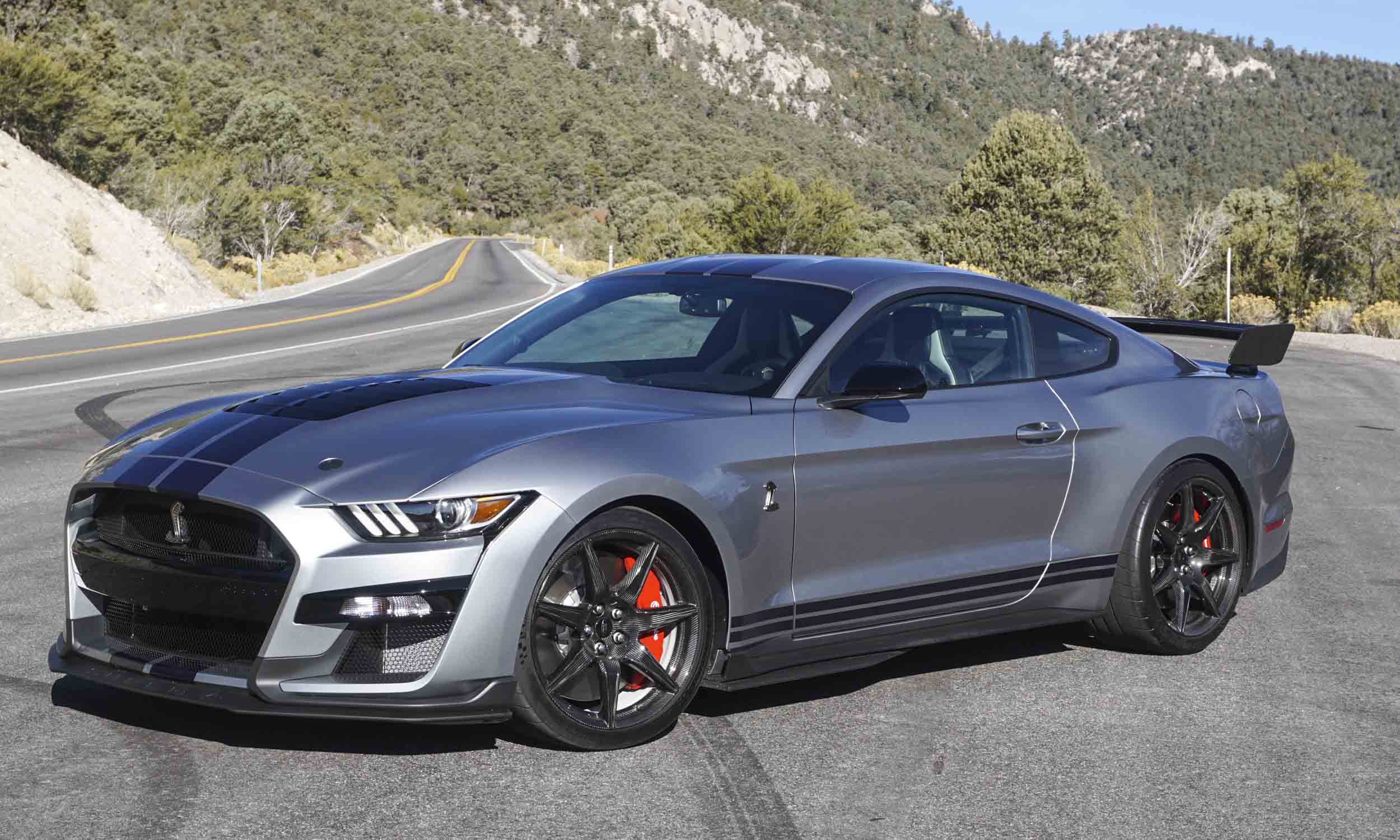 Shelby GT500
The Shelby name has been associated with Mustang performance since 1965 when Ford asked Carroll Shelby to build a competition Mustang — and the Shelby GT350 was born. Shelby went on to create the Shelby GT500 for 1967, powered by a 428 cubic-inch engine. The rest, as they say, is history: Ford’s various Shelby vehicles have become standards of performance for the automotive world. And now Ford Performance has created the most capable production car to bear the Shelby name to date: the all-new 2020 Ford Mustang Shelby GT500. Not only is the new Shelby GT500 the top performing Mustang ever on the track, it is also the most powerful Ford production car ever. 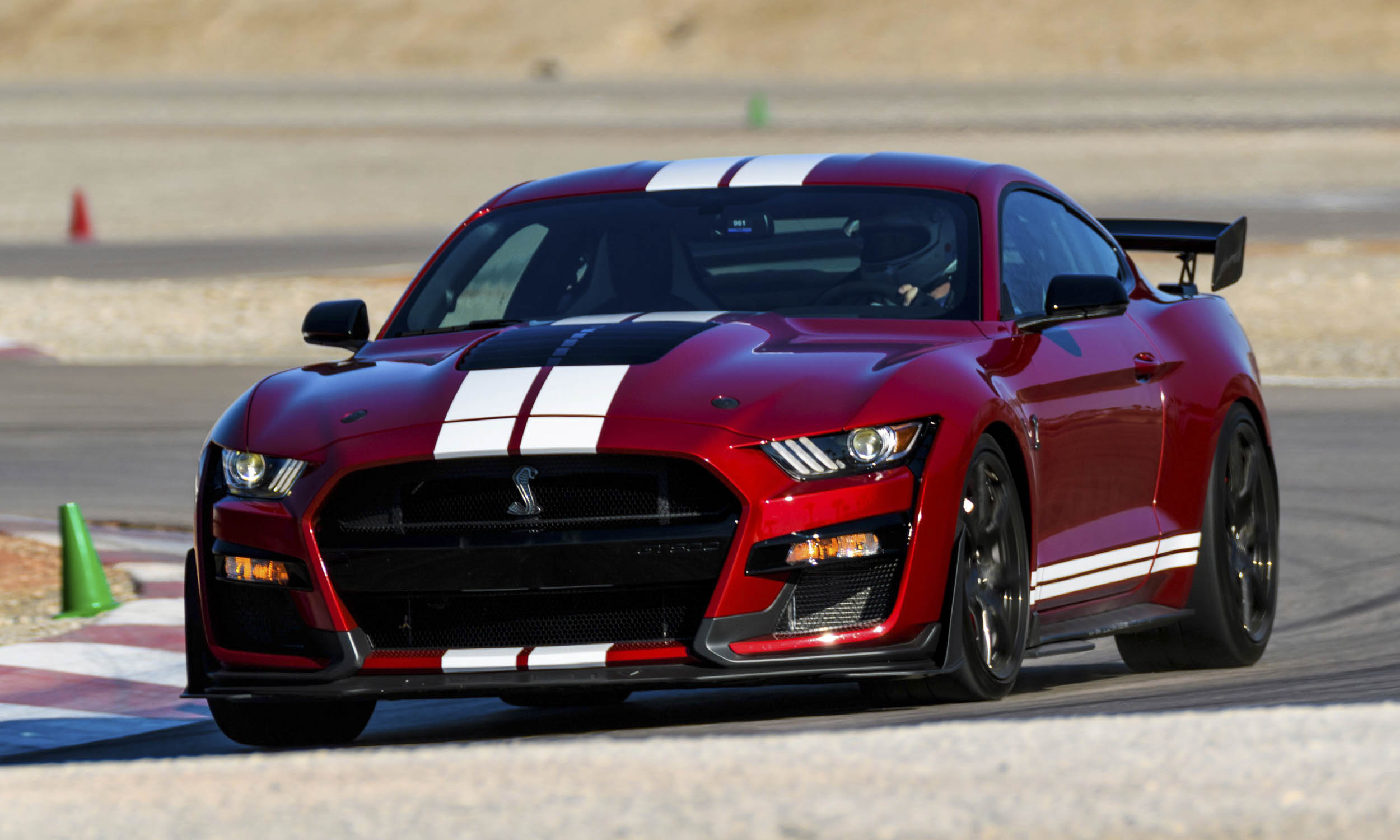 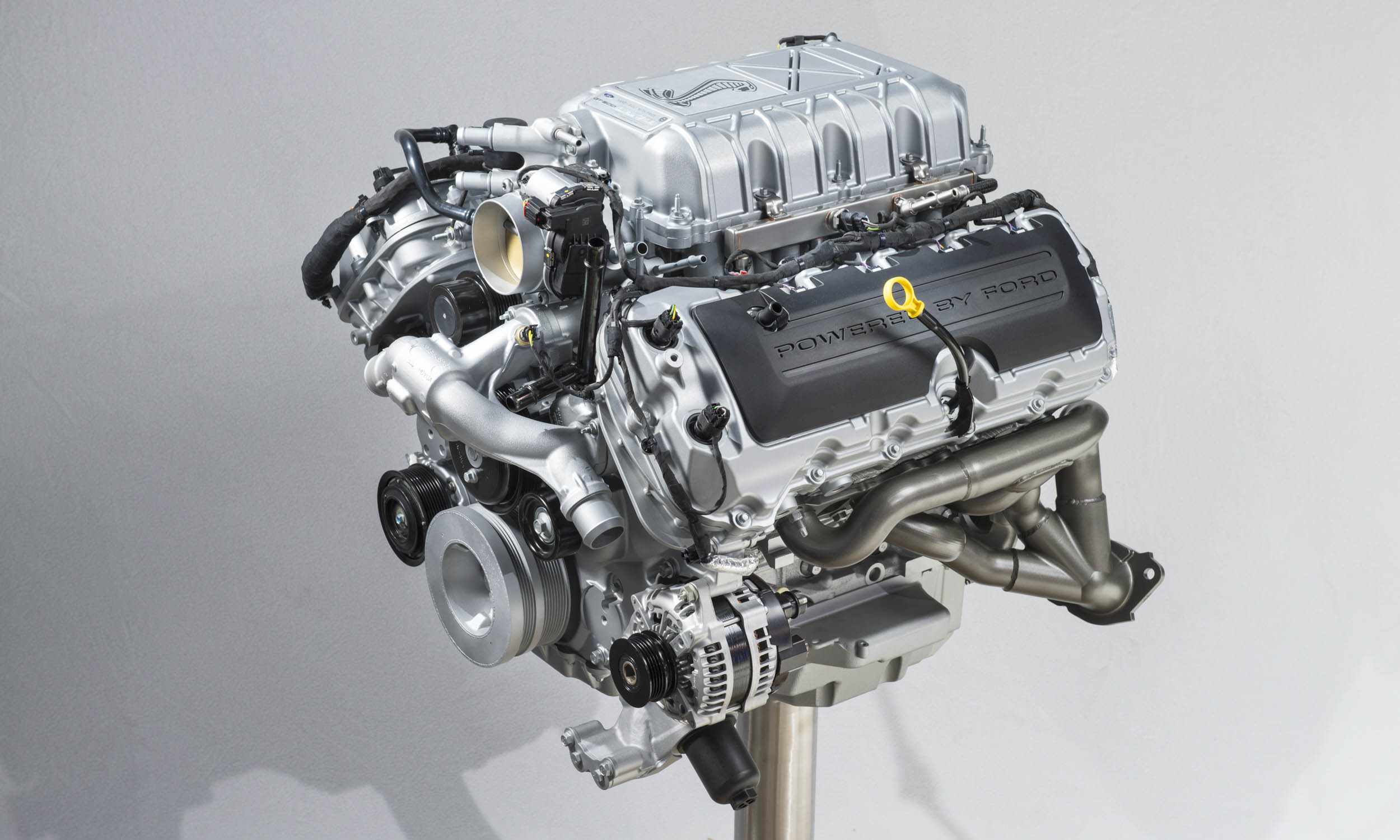 Most Powerful
At the heart of the all-new Shelby GT500 is a supercharged 5.2-liter V8 engine producing 760 horsepower and 625 lb-ft of torque, making it the most powerful Ford production car ever — even surpassing the 647-horsepower Ford GT. The aluminum alloy engine is hand built and features an inverted roots-type supercharger and an air-to-liquid intercooler positioned in the valley of the V8 engine between the cylinder heads. The engine includes weight saving wire-arc cylinder liners, high-flow aluminum cylinder heads, larger forged connecting rods and improved lubrication and cooling passages. The structural oil pan adds strength and reduces vibration and incorporates a patented active baffle system. 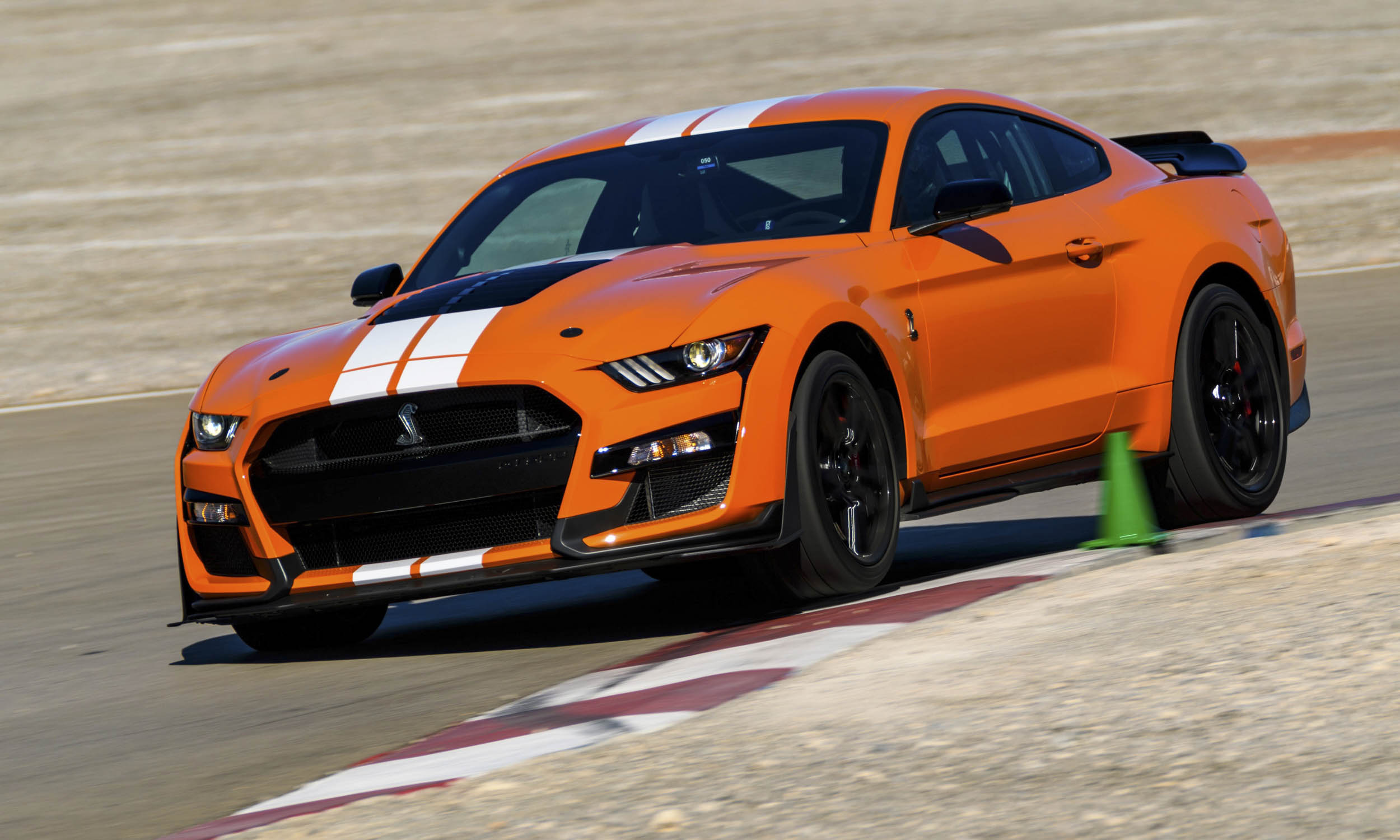 Tremec DCT
In nearly every high-level race series now except NASCAR, drivers shift gears with steering-wheel-mounted paddles, and the 2020 Shelby GT500 goes that direction as well with a 7-speed Tremec dual-clutch transmission. Capable of shifts as fast as 80 milliseconds in Sport mode, the Tremec DCT shifts faster than a manual gearbox and is the exclusive transmission for the GT500. Normal, Sport, Track, Drag and Weather modes are offered. Power gets delivered to the rear wheels through a Torsen limited-slip differential. 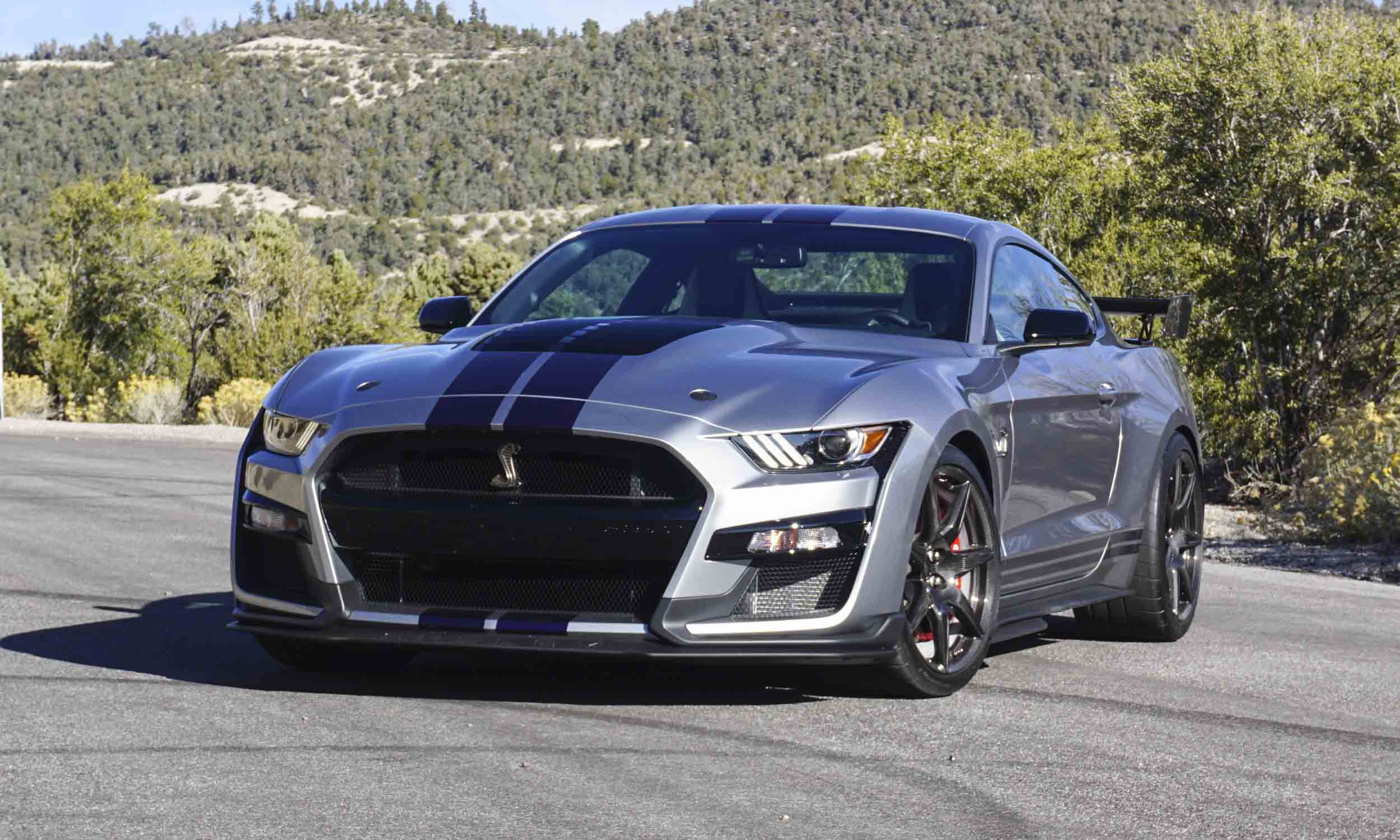 Design
The aggressive design with functional execution embodied by the 2020 Shelby GT500 is the result of extensive collaboration between design and engineering that results in a bold, striking appearance along with improved aerodynamics. The large grille and front fascia openings are more than double the size of the GT350, and six heat exchangers increase cooling airflow by more than 50 percent. (The increased cooling can reject up to 230 kilowatts of engine heat.) The large louvered hood vent improves air extraction, reduces drag and reduces front-end lift. At the rear is a new standard spoiler, and the rear diffuser receives updated composite materials for added strength. 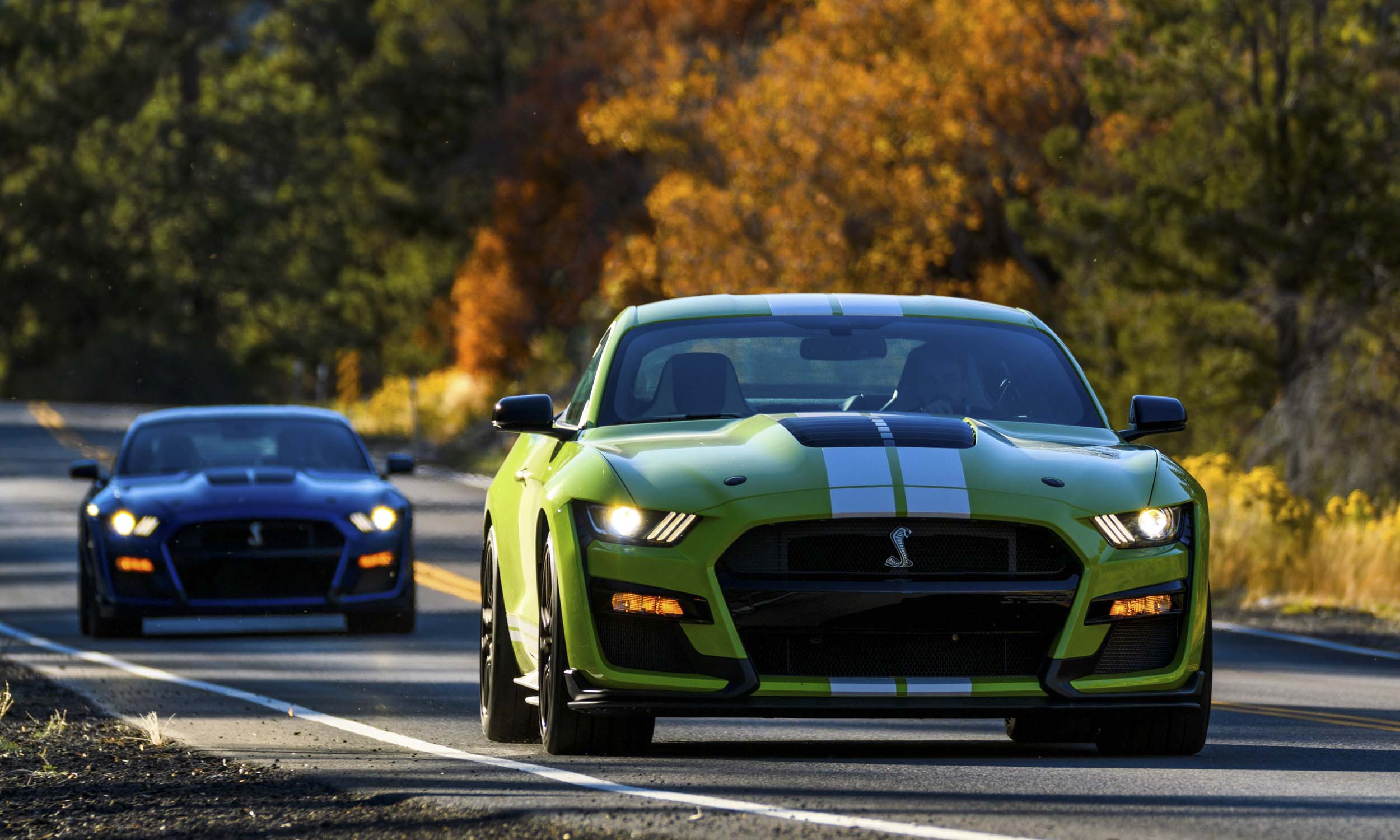 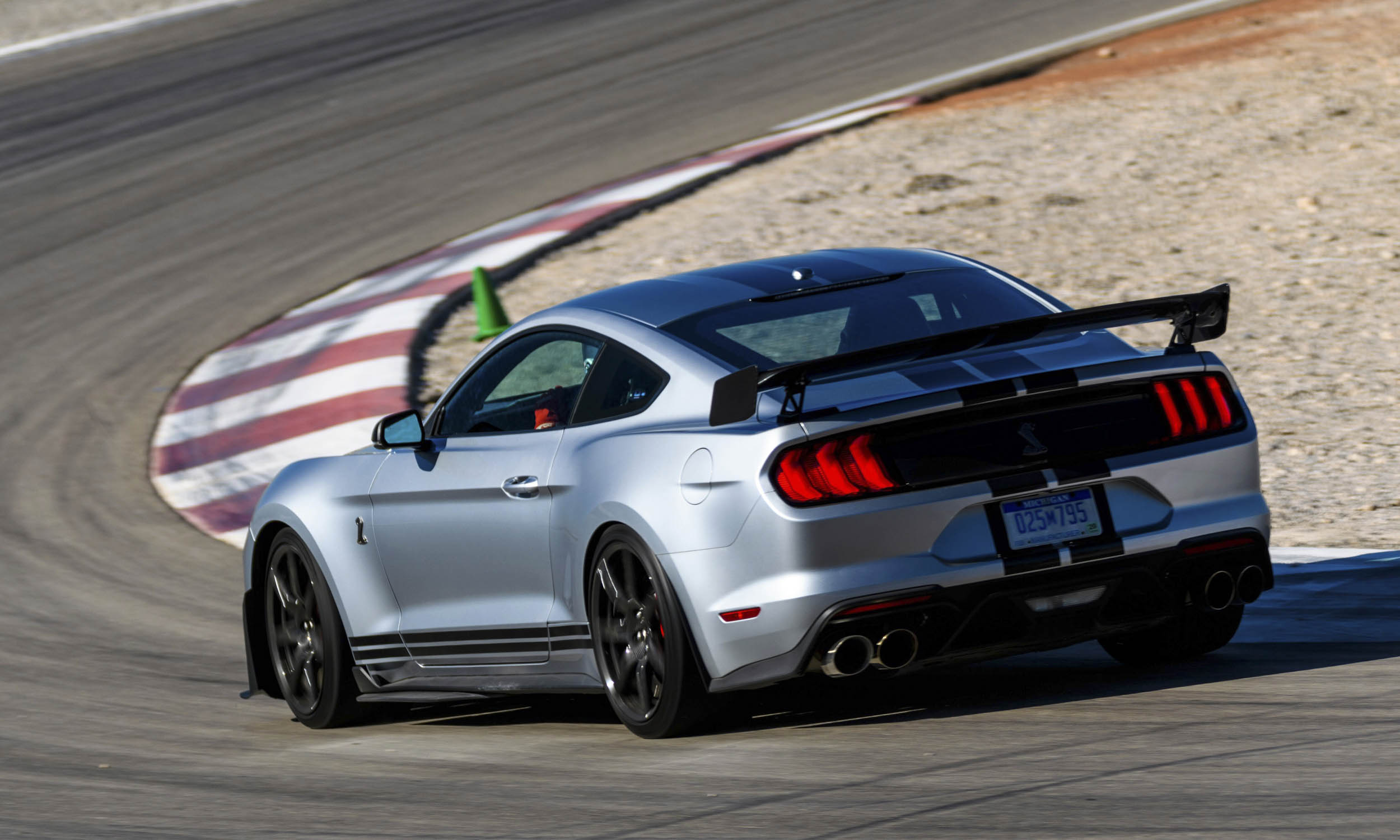 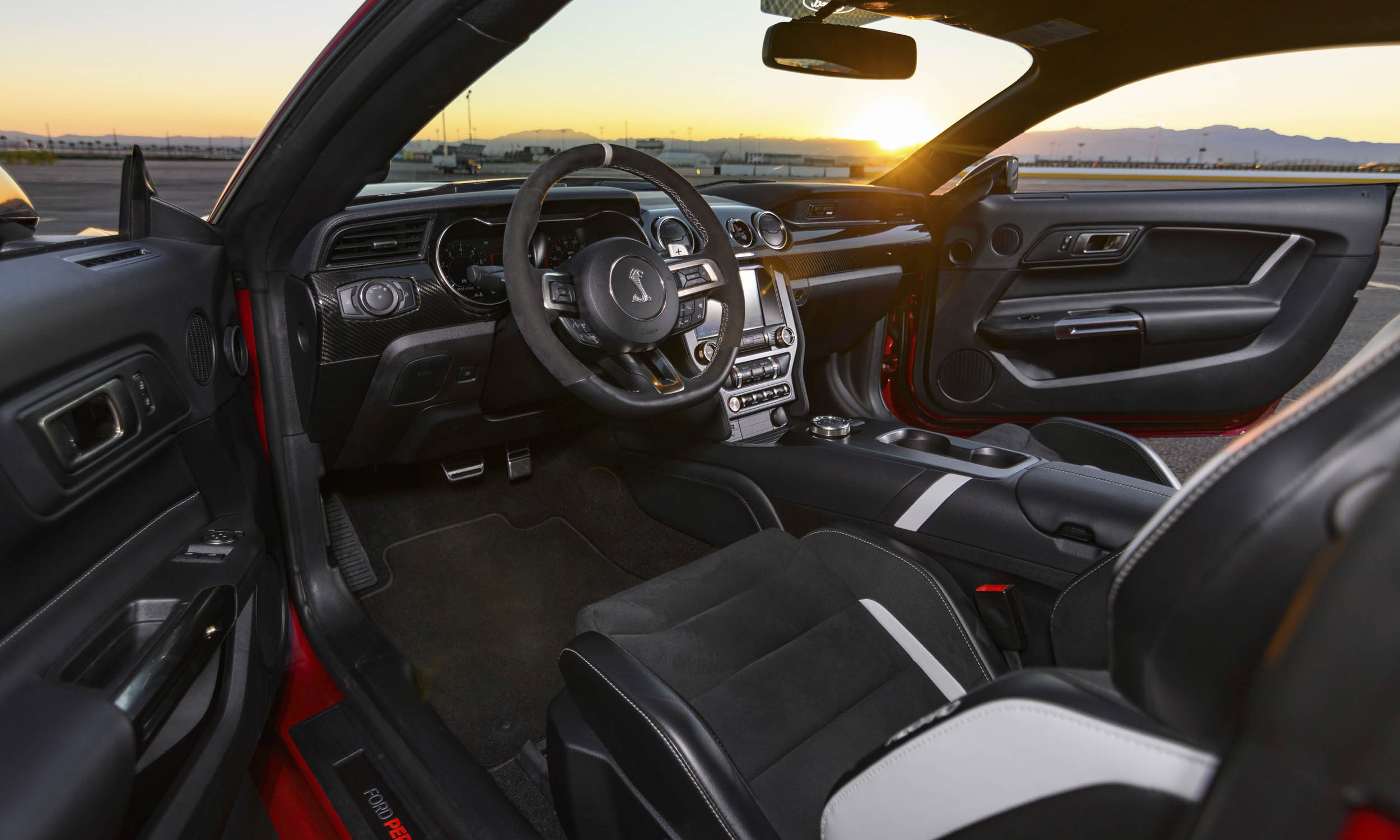 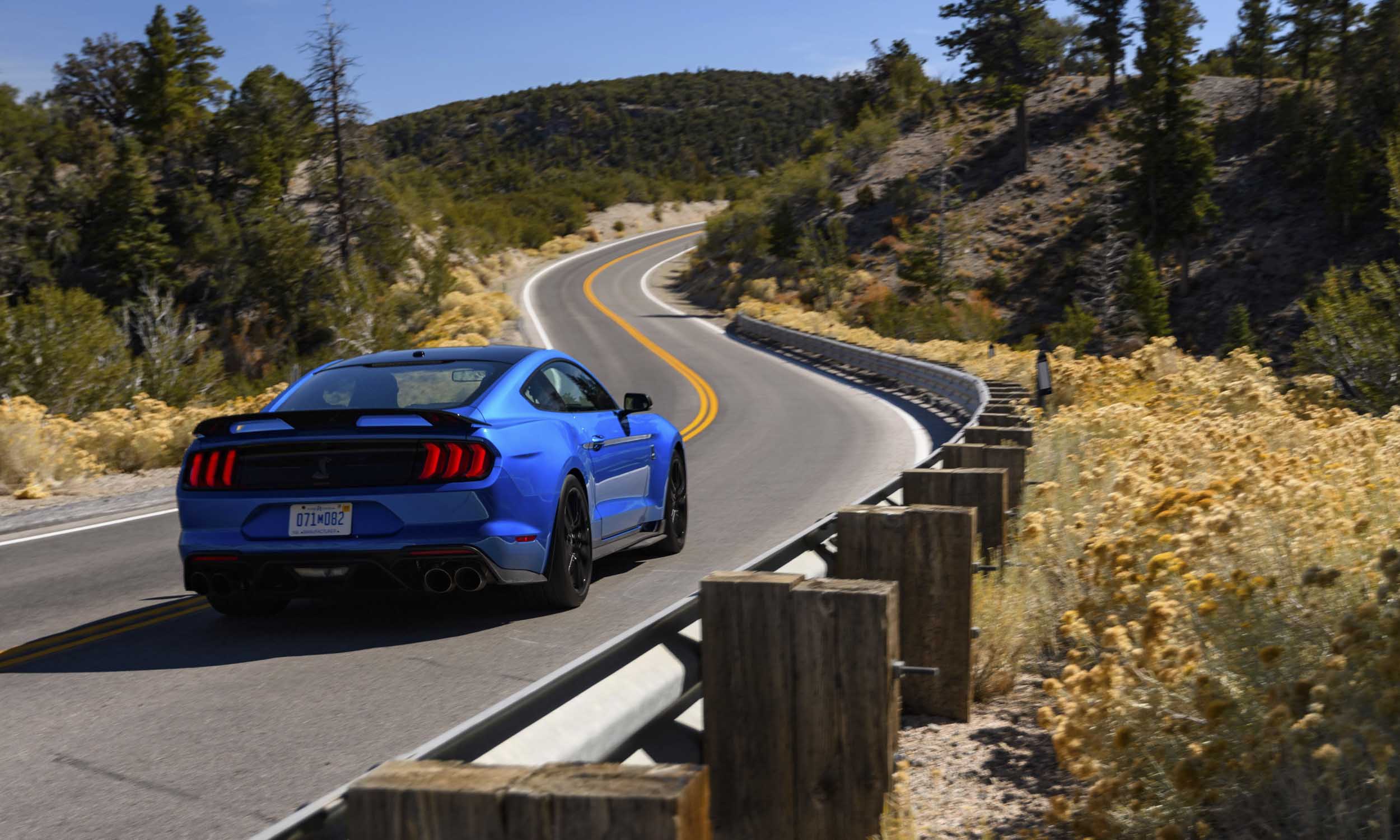 On the Road
The 2020 Shelby GT500 is, practically speaking, a race car for the street, and as a result it requires constant attention while street driving, but not because it is unwieldy or difficult to drive — it can actually be quite docile — but because it is so capable, even in Normal drive mode. It’s simply too easy to drive much faster than drivers realize. The levels of acceleration, braking and cornering are so high, and even a slight squeeze of the throttle will increase speeds by 20–30 mph in a few seconds. The suspension is firm for the street — there is no Comfort mode — but it is not harsh or jarring, and the firm ride is a trade-off for the level of track performance. The 7-speed DCT shifts so rapidly, even in Normal mode, it’s easy to see why it outperforms a manual. 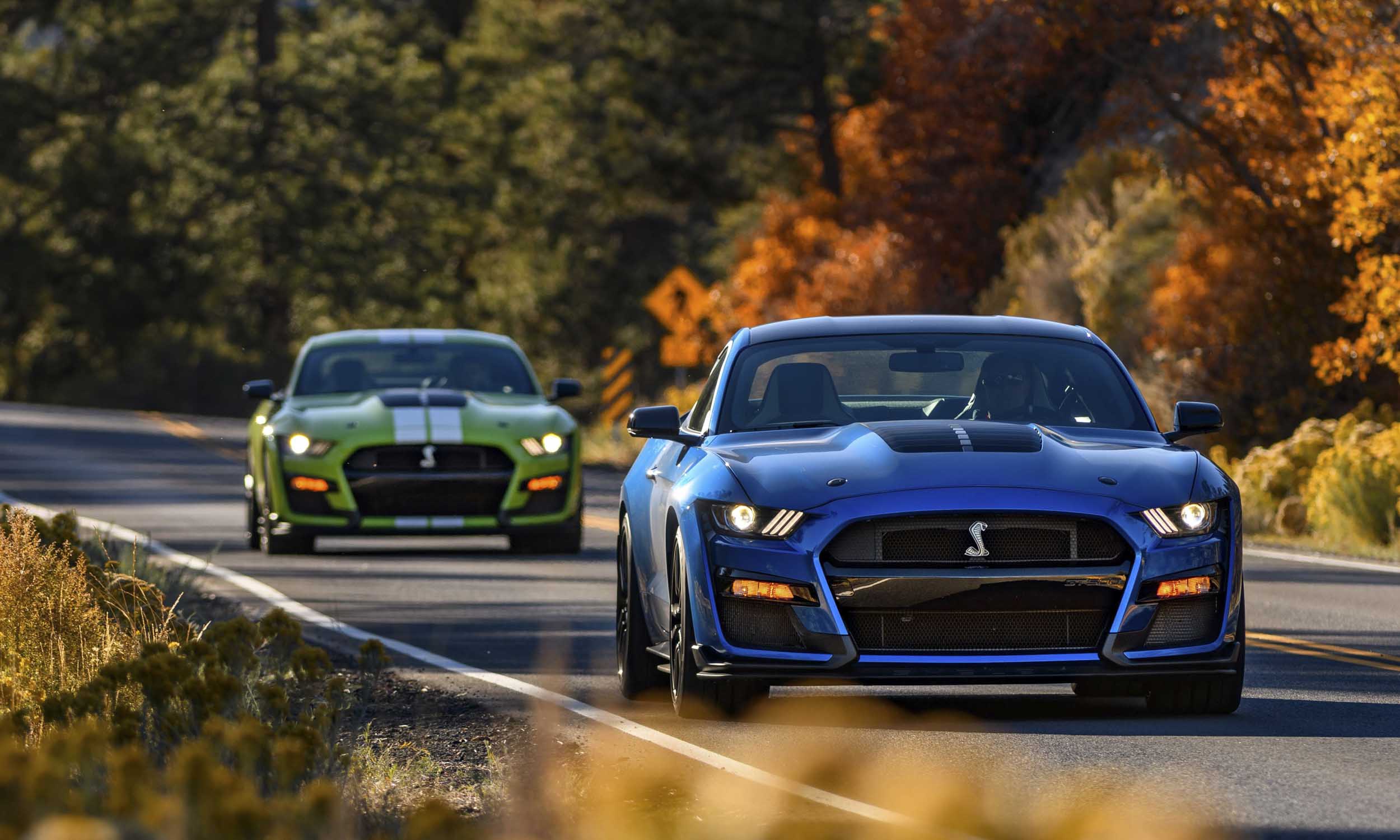 Drive Modes
As mentioned previously, drivers can select from five modes —Normal, Sport, Track, Drag and Weather — for different performance characteristics. Ford Performance has programmed the different modes with various combinations of engine response, transmission response, damping, steering, traction control and stability control for optimum performance in a variety of driving conditions. The drive mode selector allows the driver to change the mode in only one direction, so to change to the previous mode, the driver must scroll through all of the available options. It would be preferable to change drive modes in both directions. 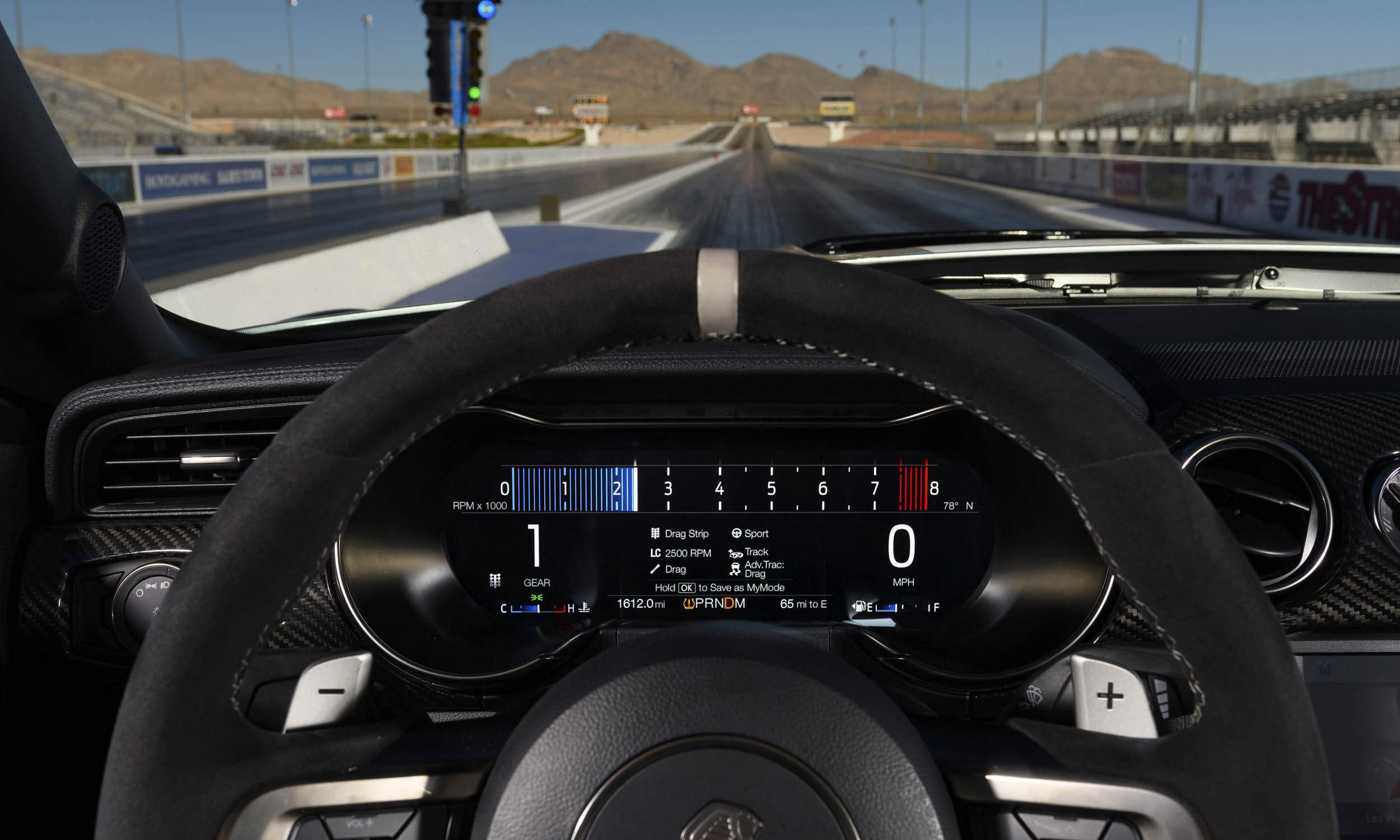 At the Strip
According to Ford, the Shelby GT500 will accelerate from zero to 60 mph in 3.3 seconds and complete the quarter mile in 10.7 seconds — impressive numbers for a street-legal car. In addition, Ford also quotes a 0–60–0 mph time of 10.6 seconds. These numbers seem entirely credible — even with limited dragstrip experience, this auto journalist was able to run 11.55 seconds at 129.43 mph on The Strip at Las Vegas Motor Speedway. Granted, the Shelby’s rear tires were warmed by taking advantage of the line-lock feature, and the launch control set at 1800 rpm to post that time. Considering we were at more than 2,000 feet of elevation and with temperatures in the mid-80s, an experienced driver in more favorable conditions could likely run 10.7 seconds or below. 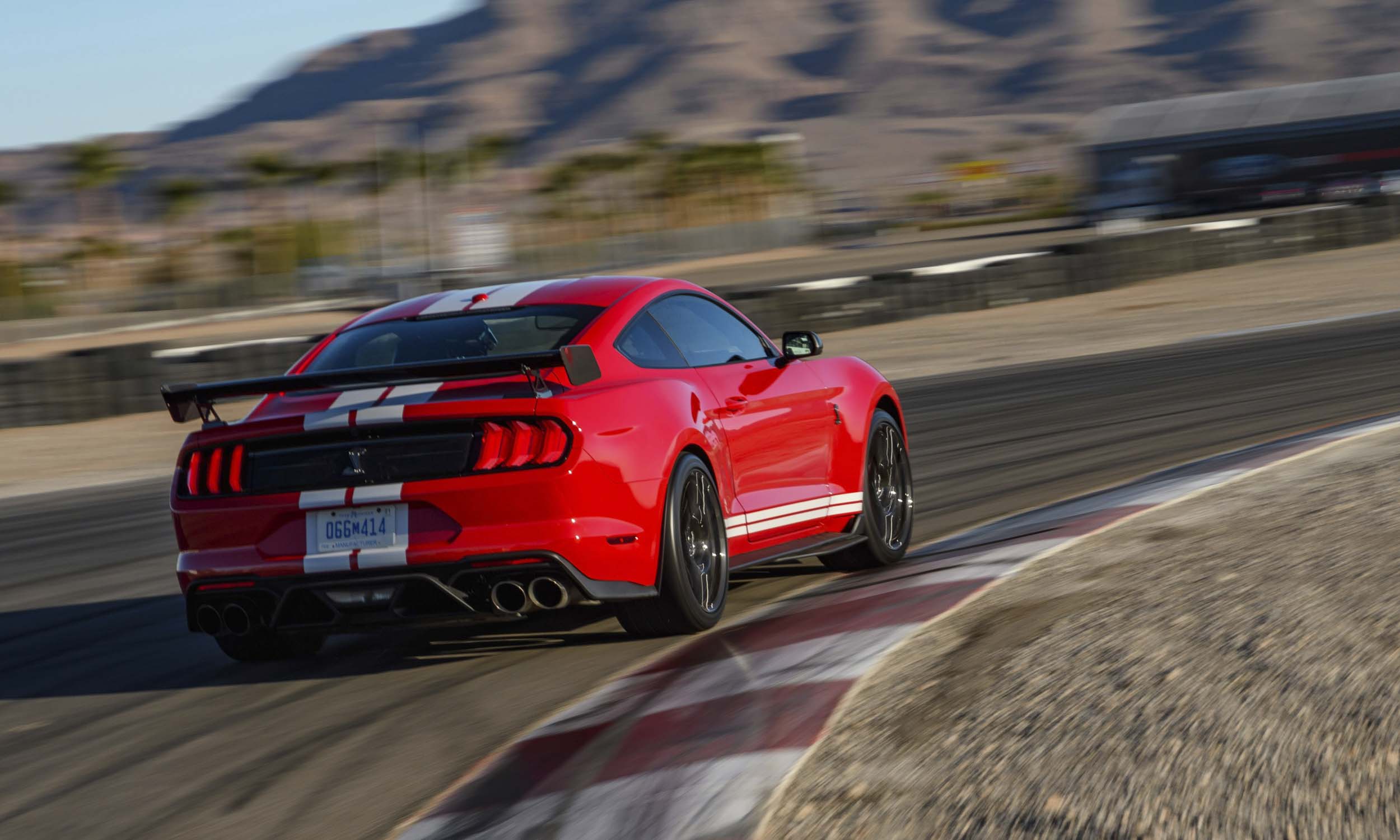 On the Track
As impressive as the Shelby GT500 is on the drag strip, the road course is really where it shines. During our press event we drove on the Outside Road Course at Las Vegas Motor Speedway, on a 2.4-mile 12-turn track with two fast straightaways, fast sweeping turns and a wide variety of other turns and combinations. The overall impression: the GT500 is surprisingly easy to drive and it instills confidence, making an average driver better — even on an unfamiliar road course. 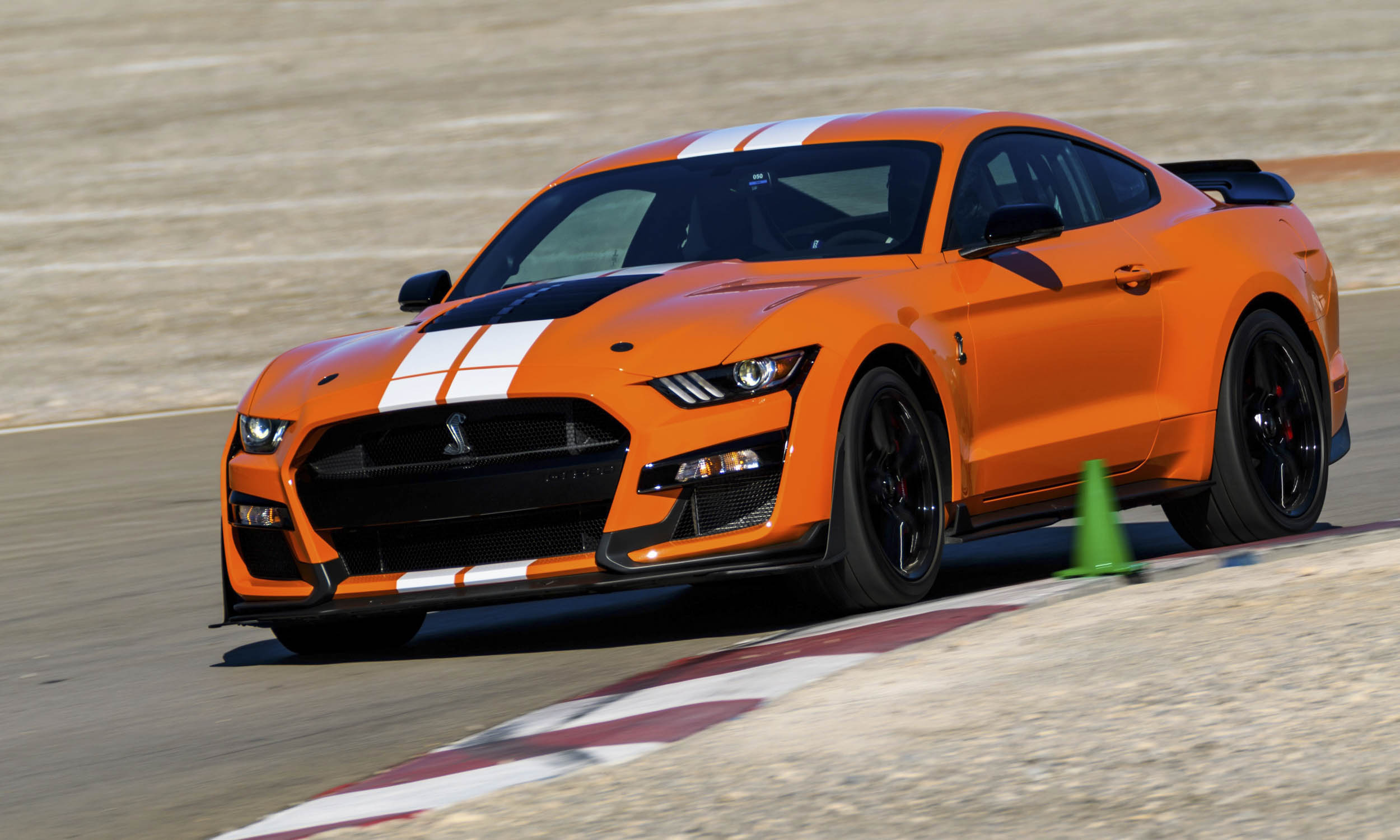 7-Speed DCT
The 7-speed DCT is really impressive on track, only once needing a manual shift on the cool-down lap to drop engine speed because the DCT was still holding the lower gear. In automatic mode on hot laps, the DCT downshifted under braking, held the gear through corners and upshifted instantaneously without power interruption. Although some will express nostalgic regret for the demise of the manual transmission, the Tremec DCT is better and improves performance — similar to today’s top race cars. Not once during our drive was the transmission revving out where it was not supposed to be. 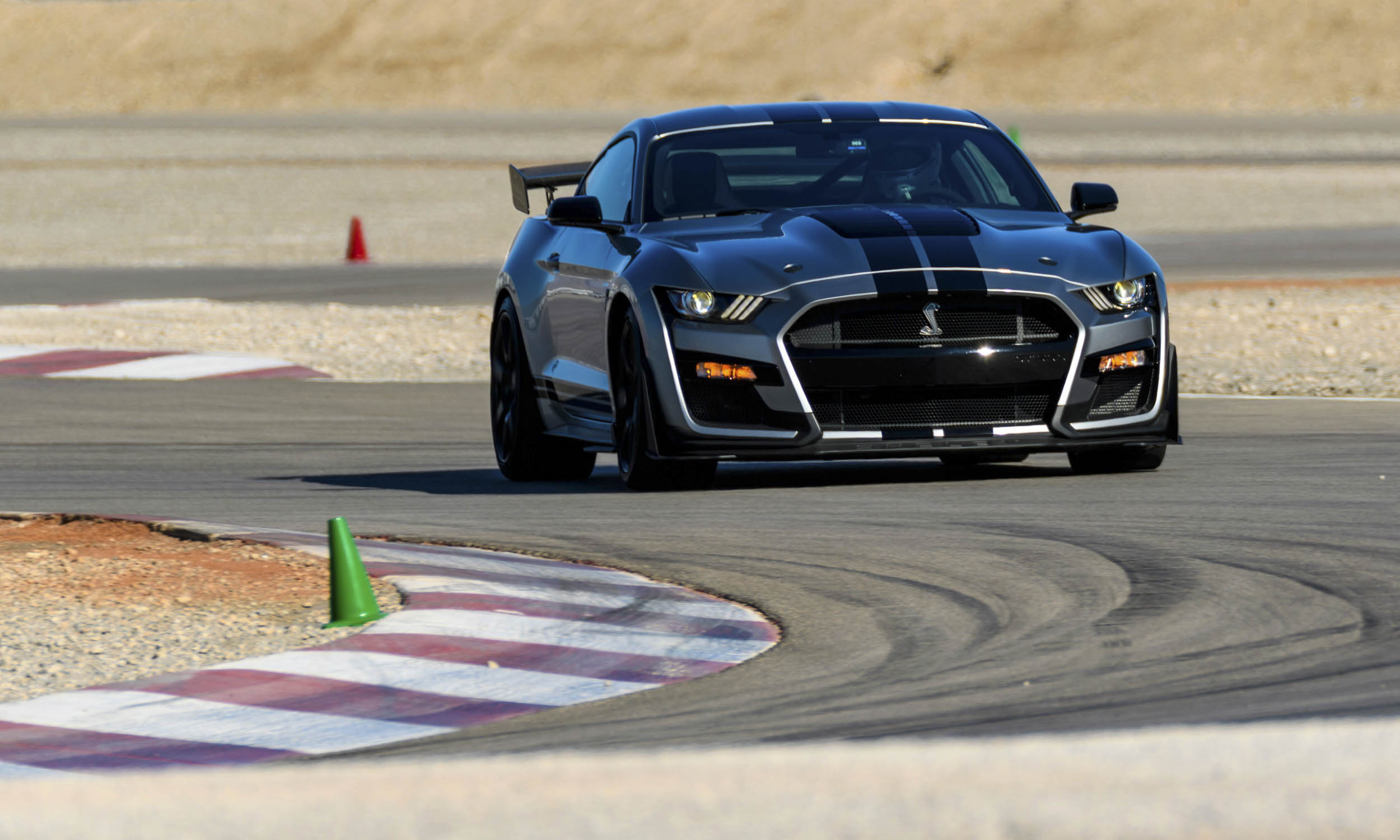 Balanced
For the track, the GT500s were all equipped with the Carbon Fiber Track Package, Recaro seats and 5-point racing harnesses, which keep drivers securely positioned in their seats so they really feel what the car is doing. The car feels balanced with proper steering feel and good turn-in at corners, remaining stable and balanced throughout multiple turns. Exiting slower or tighter corners, the GT500 really puts power down well, taking advantage of all available horses. With the GT500 in Track mode, the traction control and stability control are still active, but allow more leeway before intervening — which means drivers can get the rear end out under hard acceleration. The brakes are incredibly powerful, stopping the car fast and consistently from 130 mph at the end of the straight. 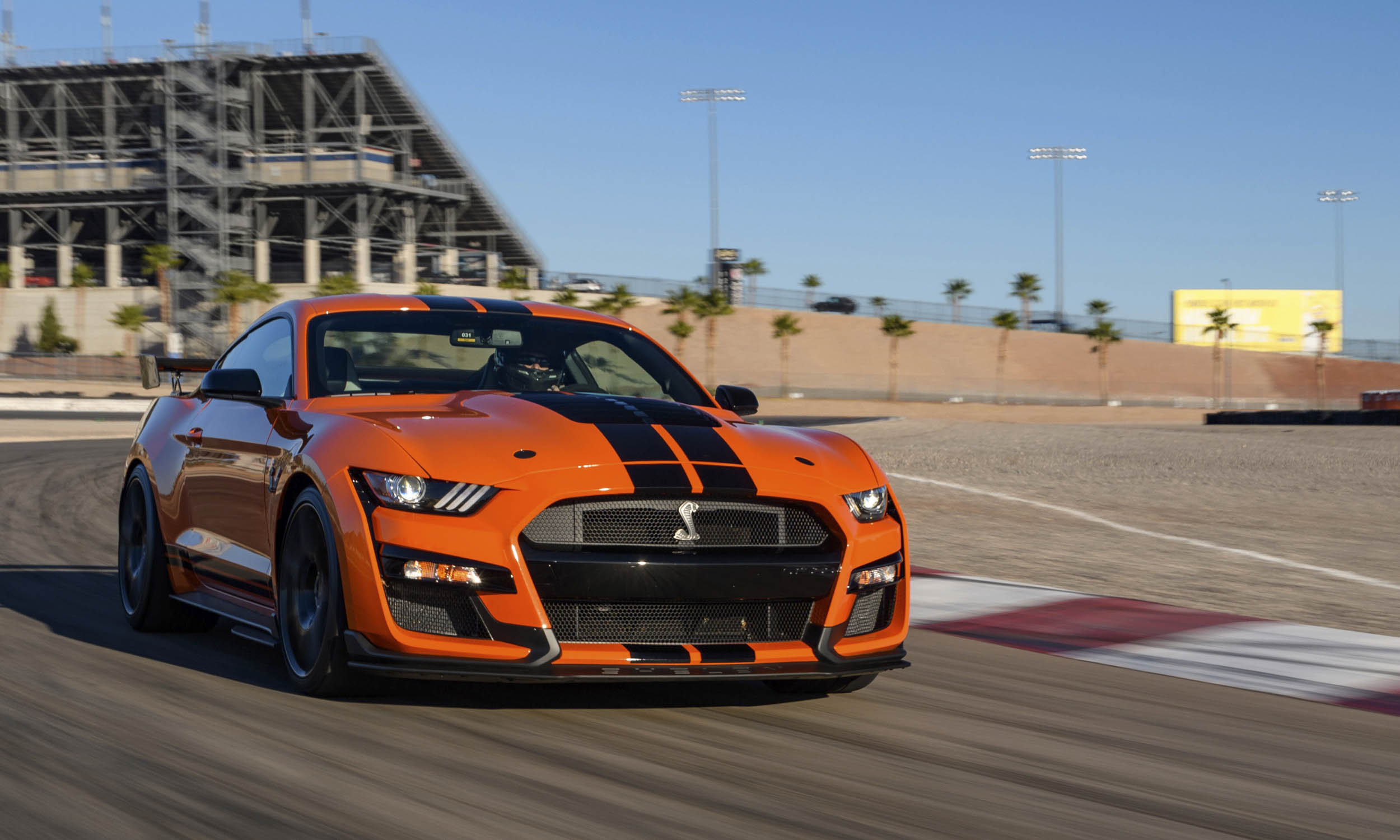 Professional Driver
In addition to allowing journos to take solo hot laps in the GT500, Ford brought professional driver Billy Johnson to Las Vegas Motor Speedway to show us how things get done. Johnson helped in development of the GT500 and raced this year in both the Ford GT and Mustang GT4. In the hands of a professional driver, the GT500 — in Track mode with both the traction control and stability control switched off — is just as balanced and controllable as it is for those of us using the additional electronic help. The GT500 still puts the power down smoothly out of corners, and Johnson drifted through several in intentionally-induced slides, maintaining balance and control. 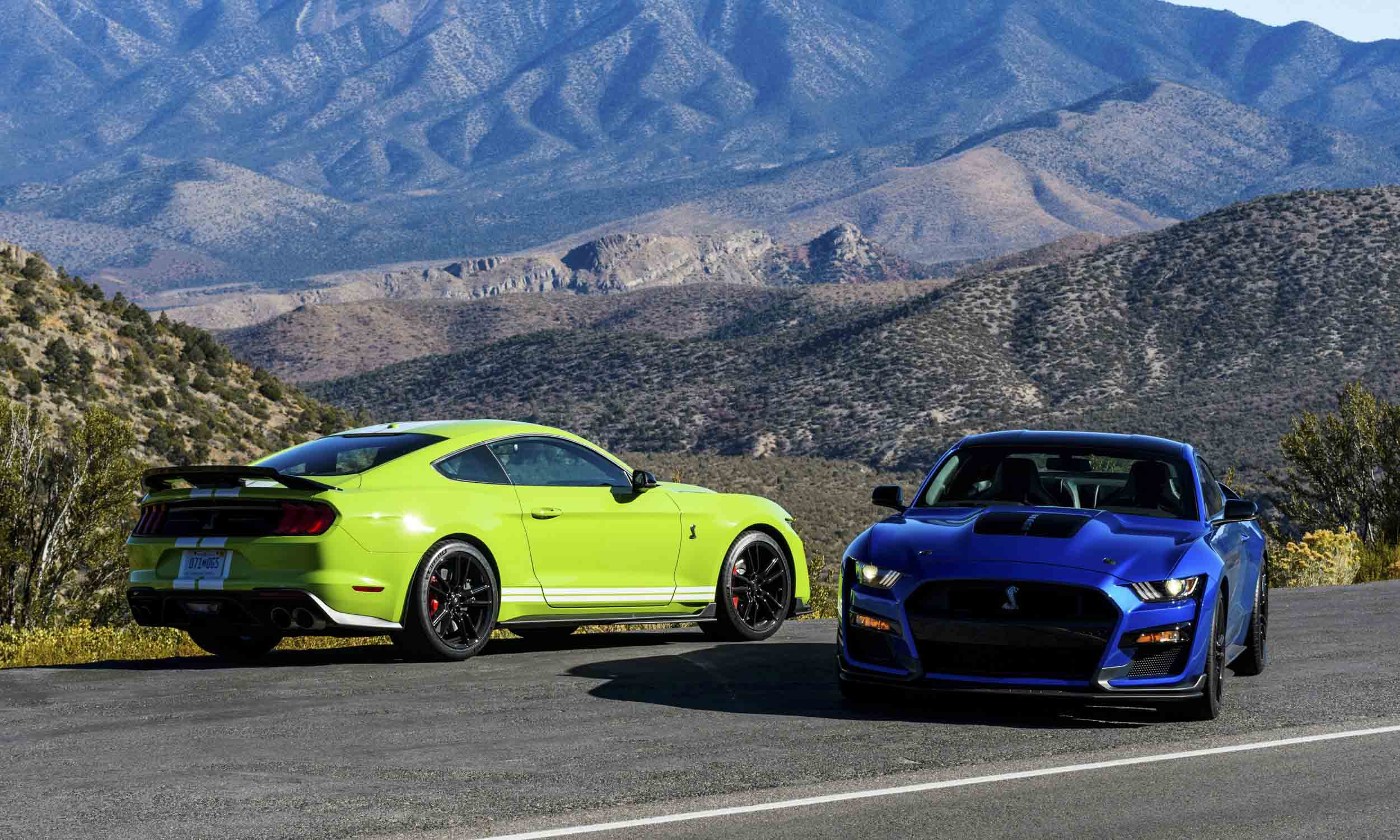 Right for You?
The most powerful Ford ever and the pinnacle of Mustang performance, the 2020 Shelby GT500 is a street-legal track car that you can live with every day. If you enjoy autocross or high-performance track days, the GT500 could be your car — a car that will make an average driver better. 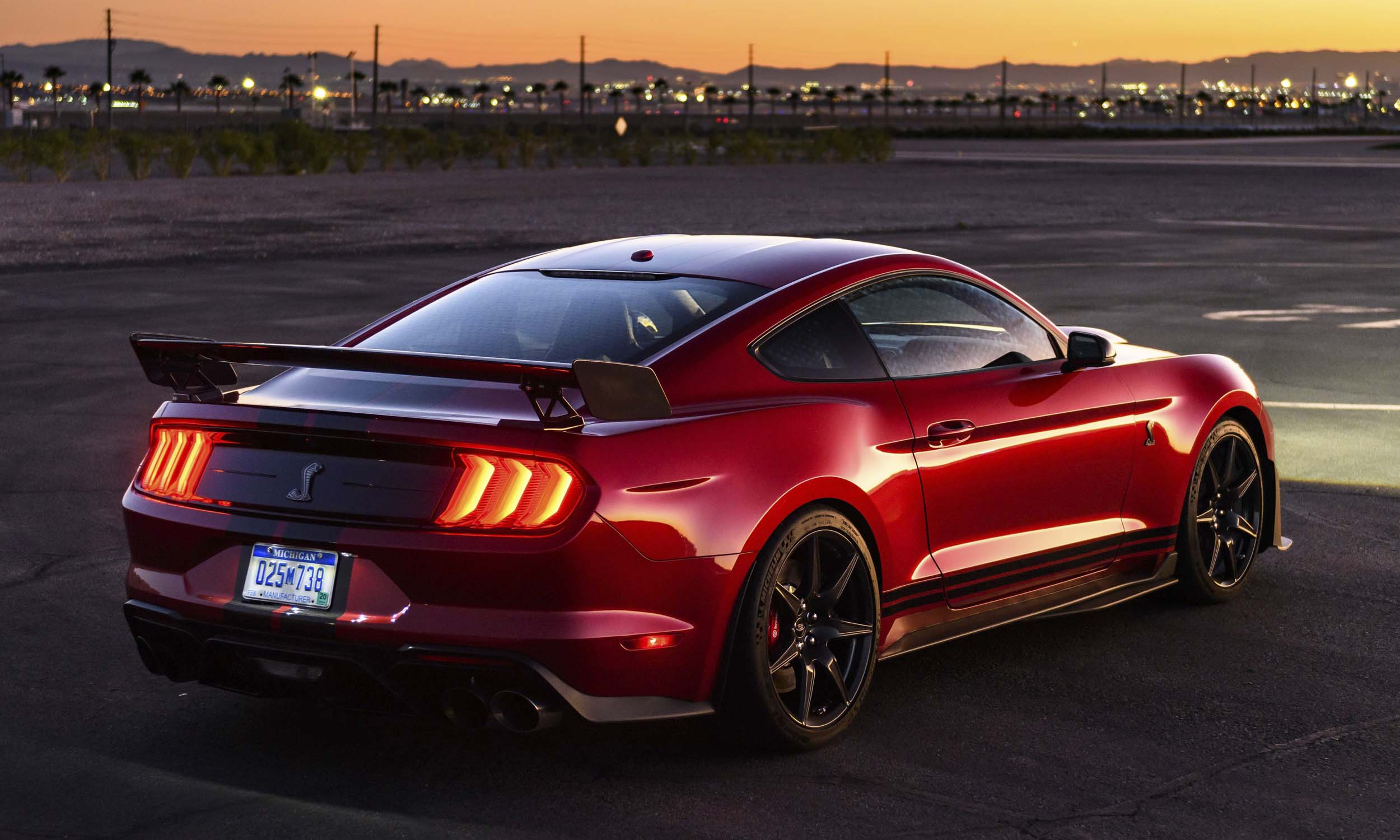 Rating: 9.0
Pros: Tremendous track performance; makes average driver better; livable on the street.
Cons: Mustang switchgear dated; change drive modes only one direction; rotary gear selector seems out of place.
Bottom Line: As the top performance Mustang, the 2020 Mustang Shelby GT500 is tremendously capable and rewarding on the track, and still easy to live with and fun on the street. 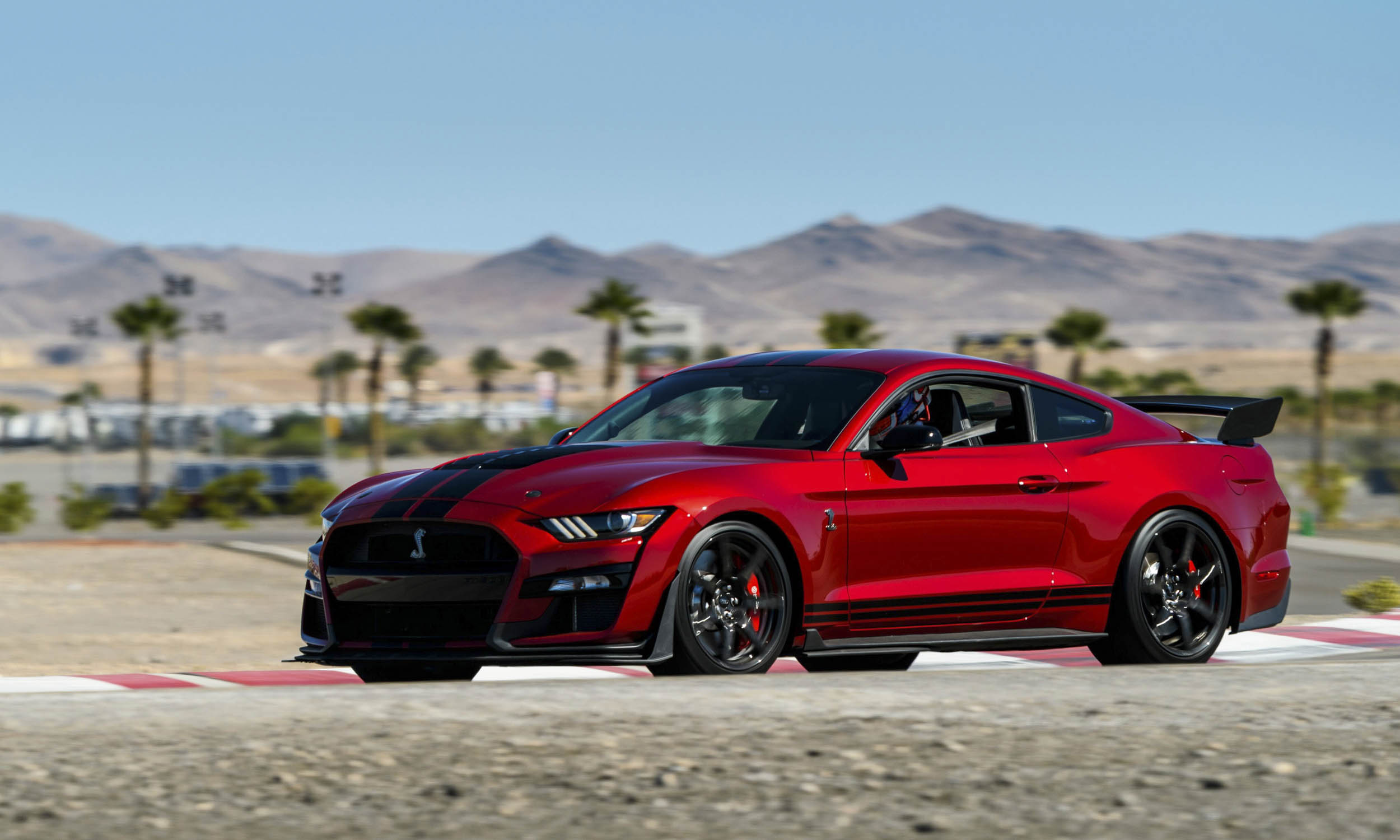 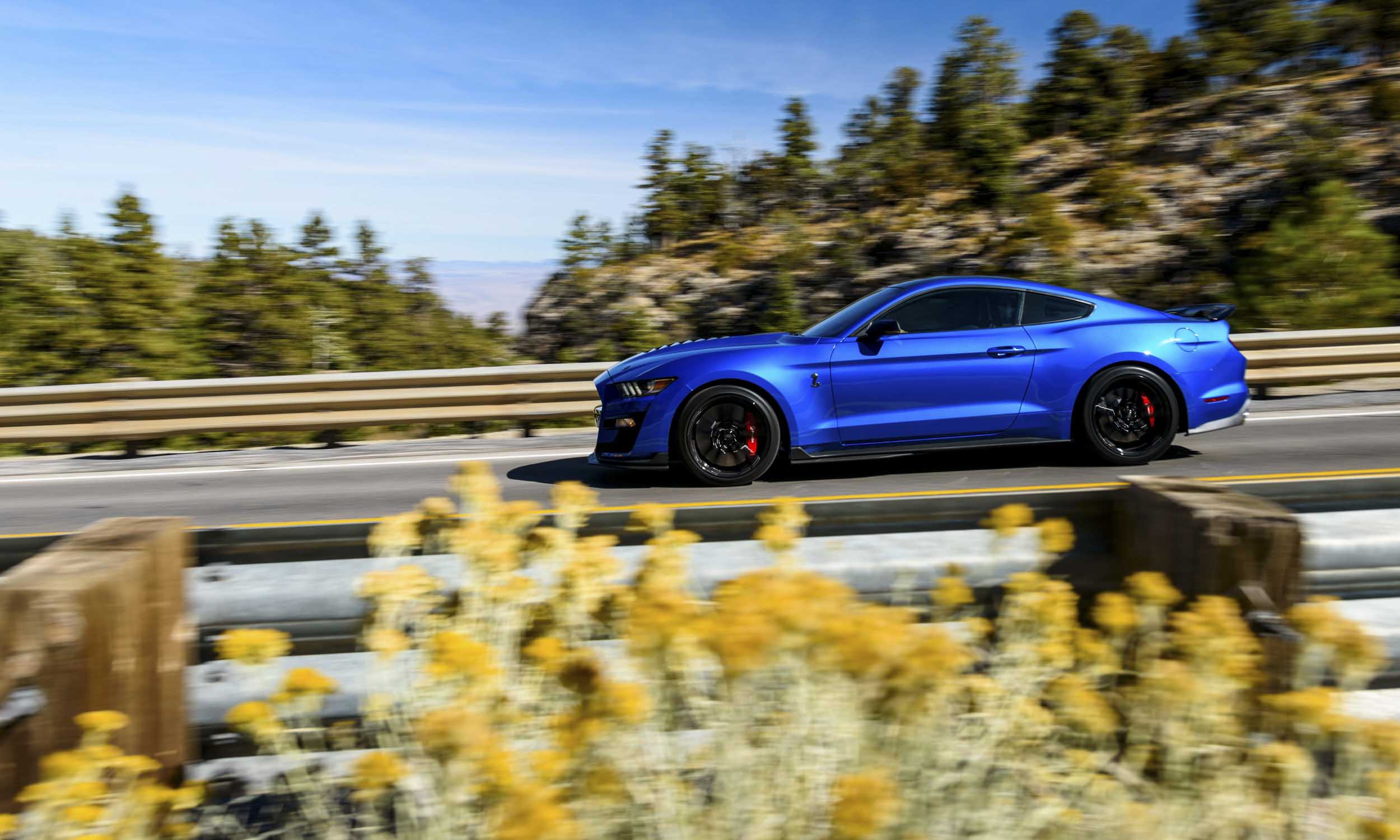 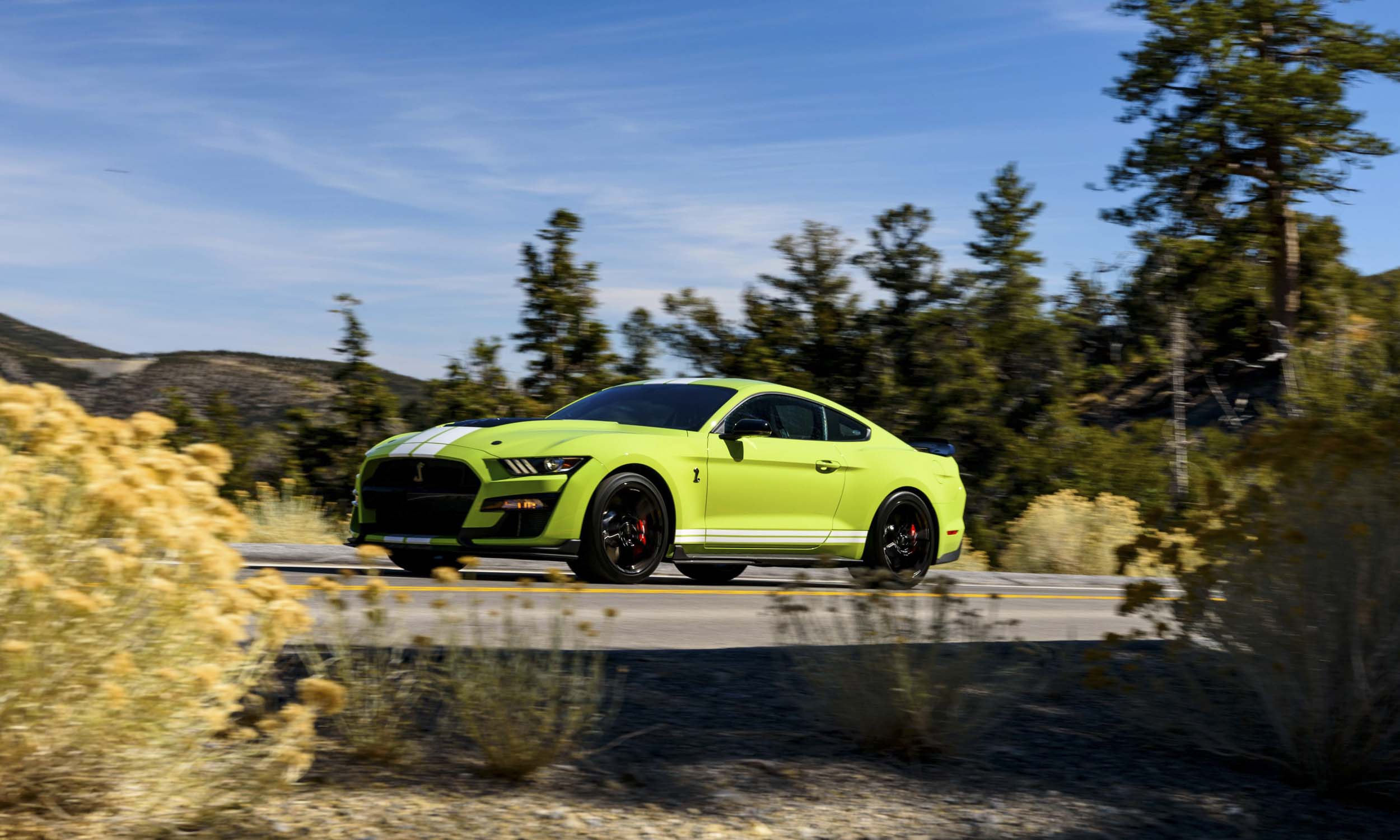 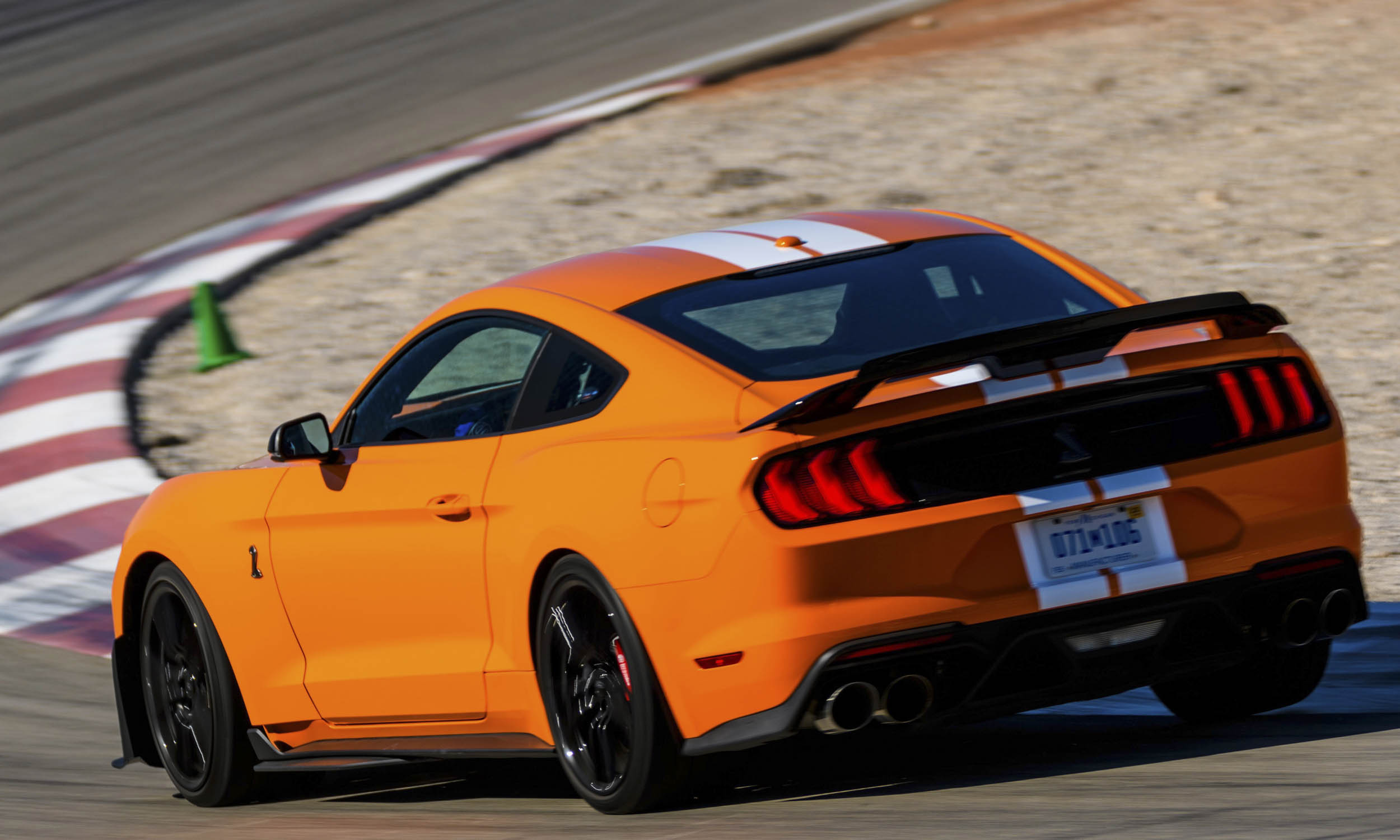 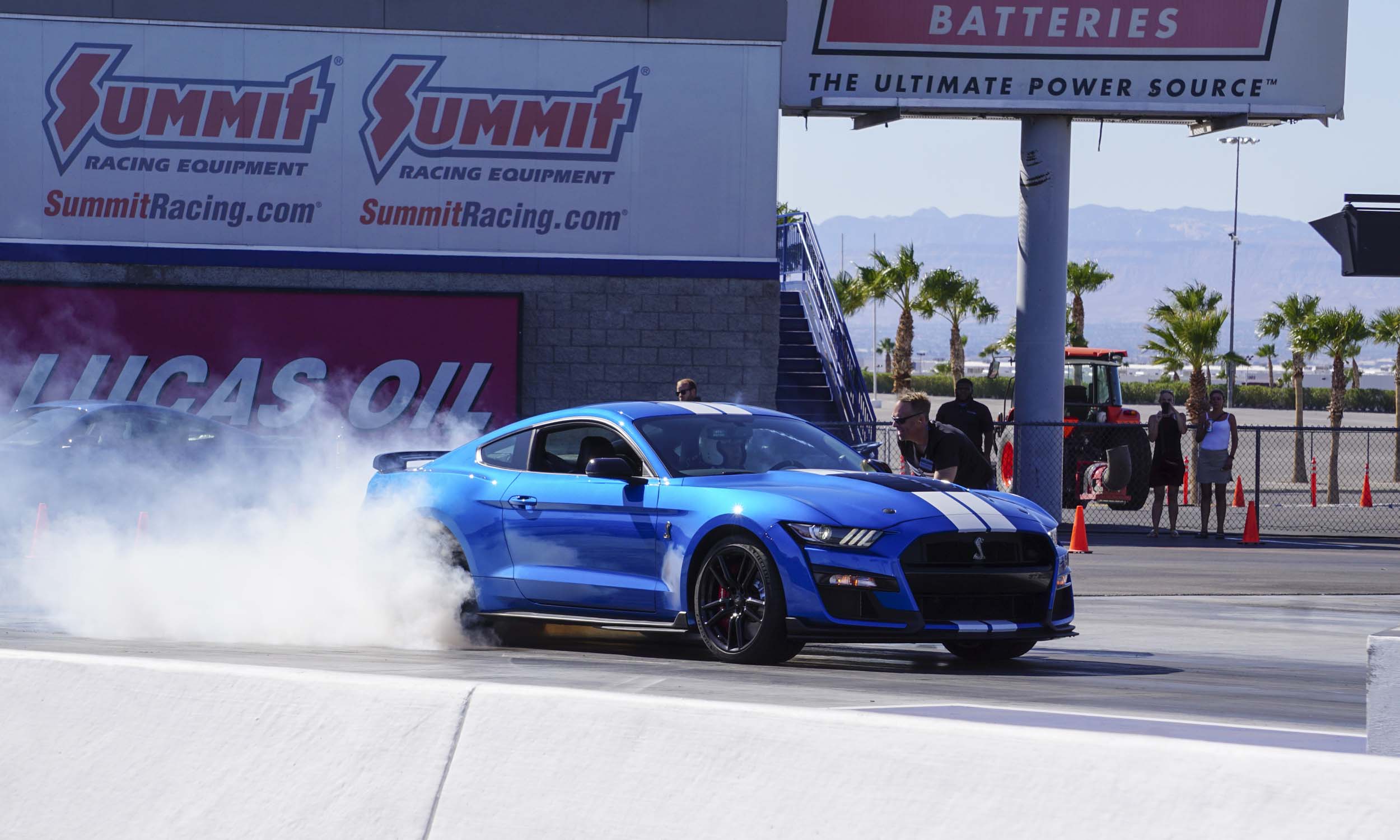 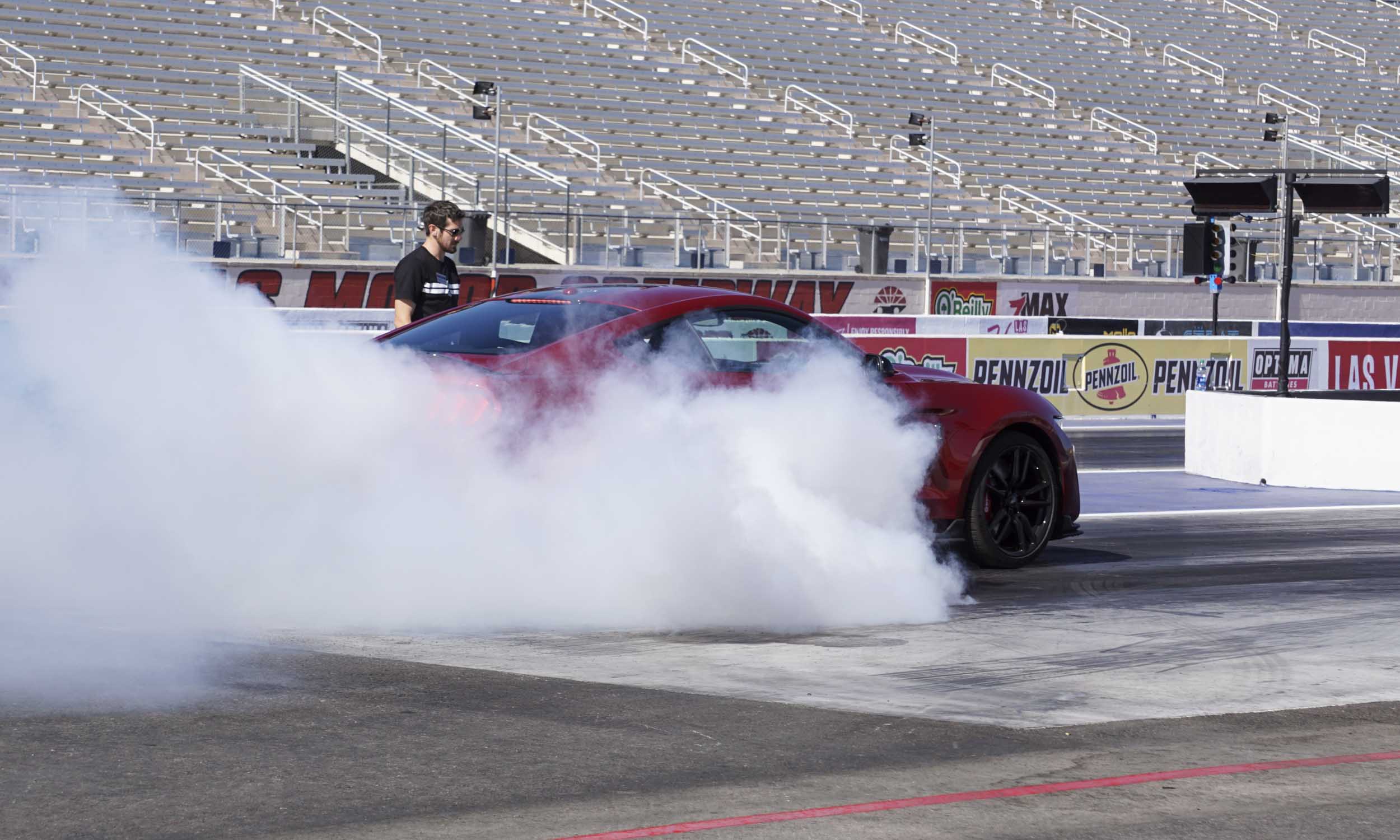 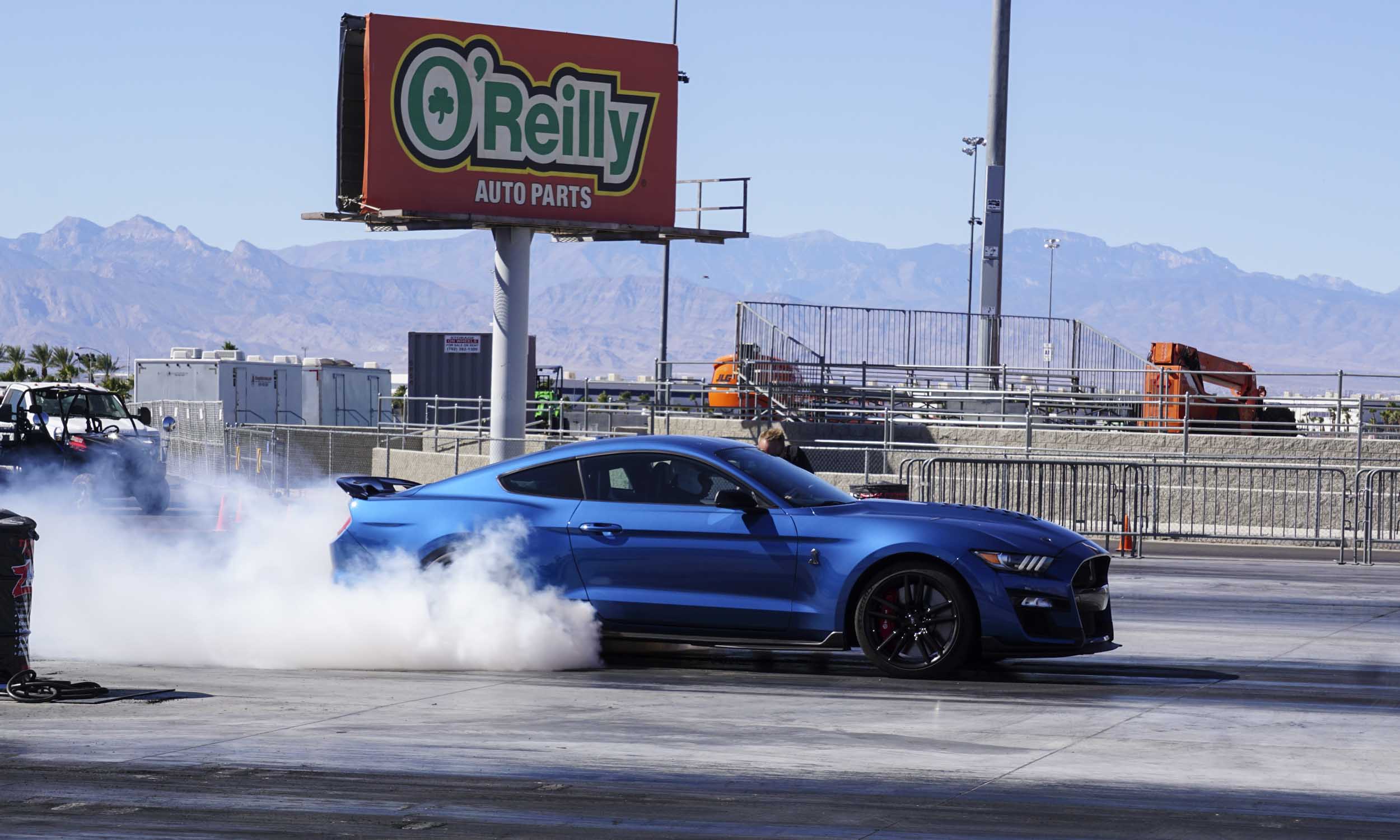 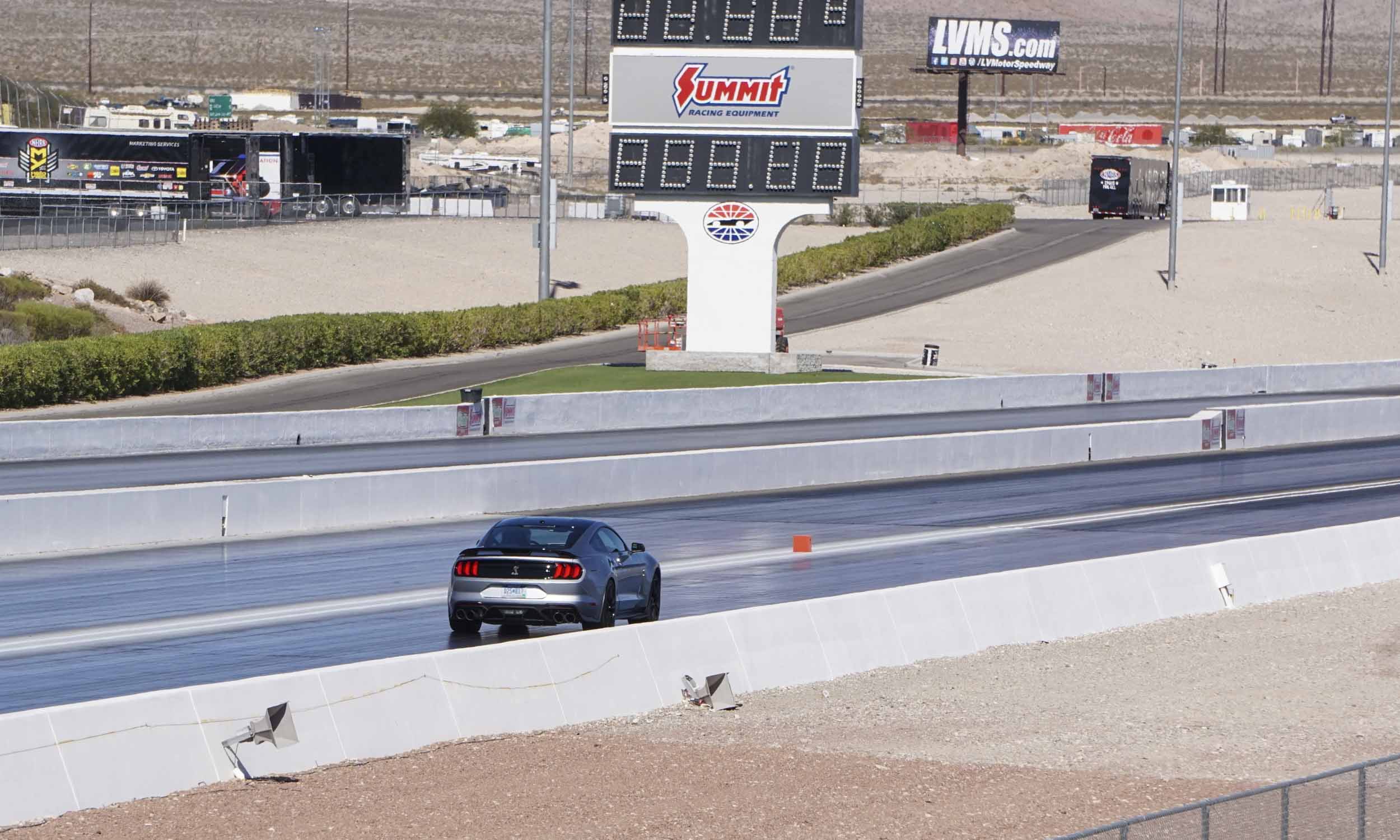 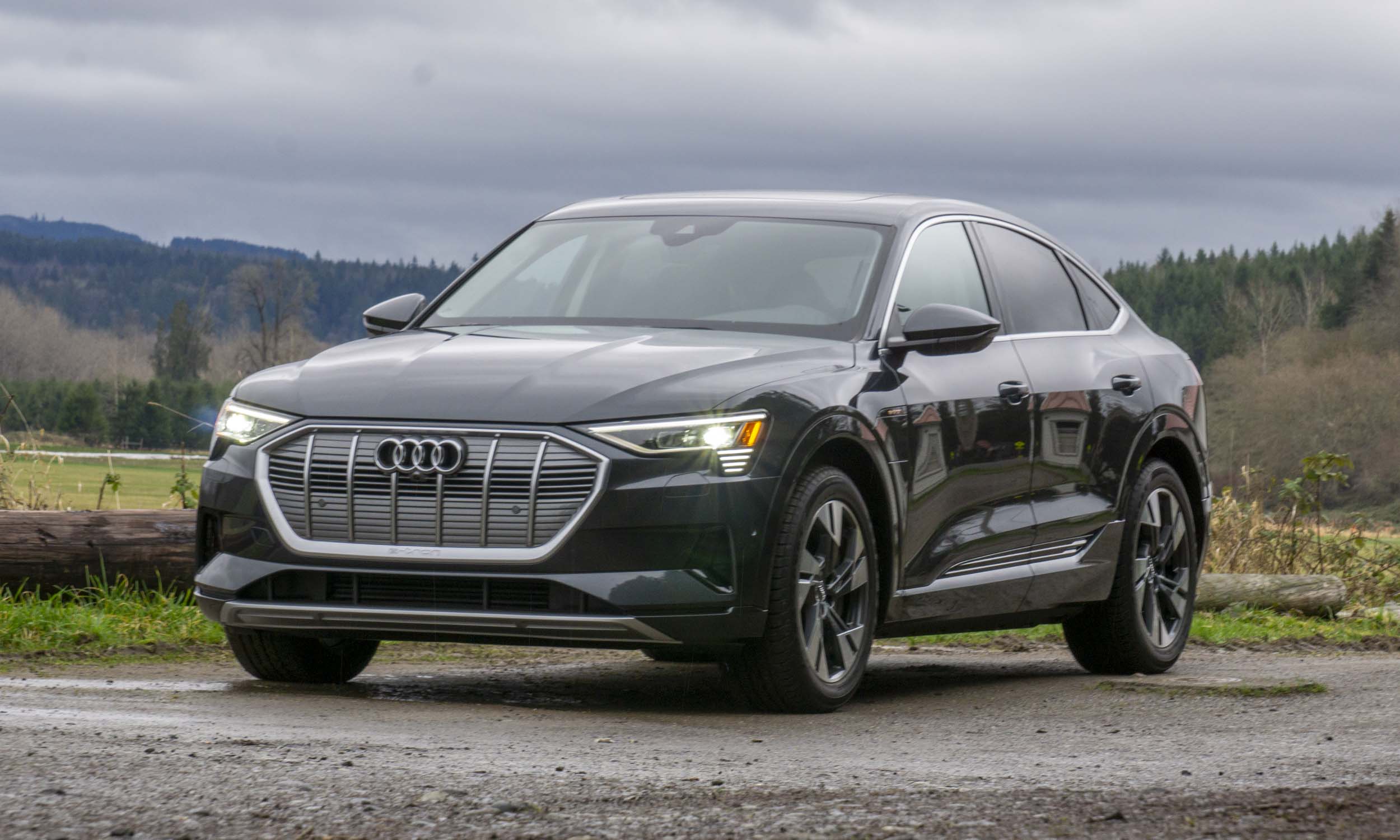 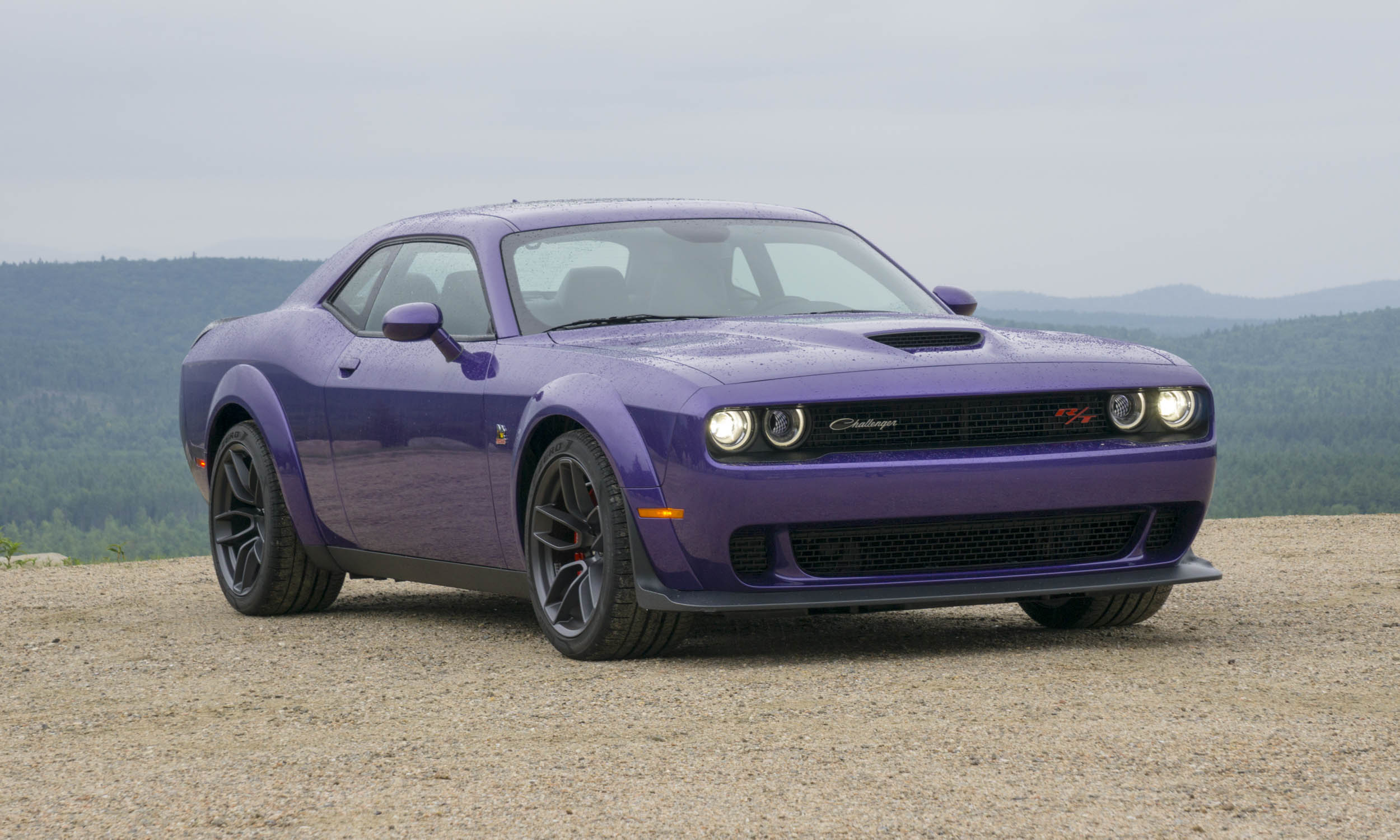