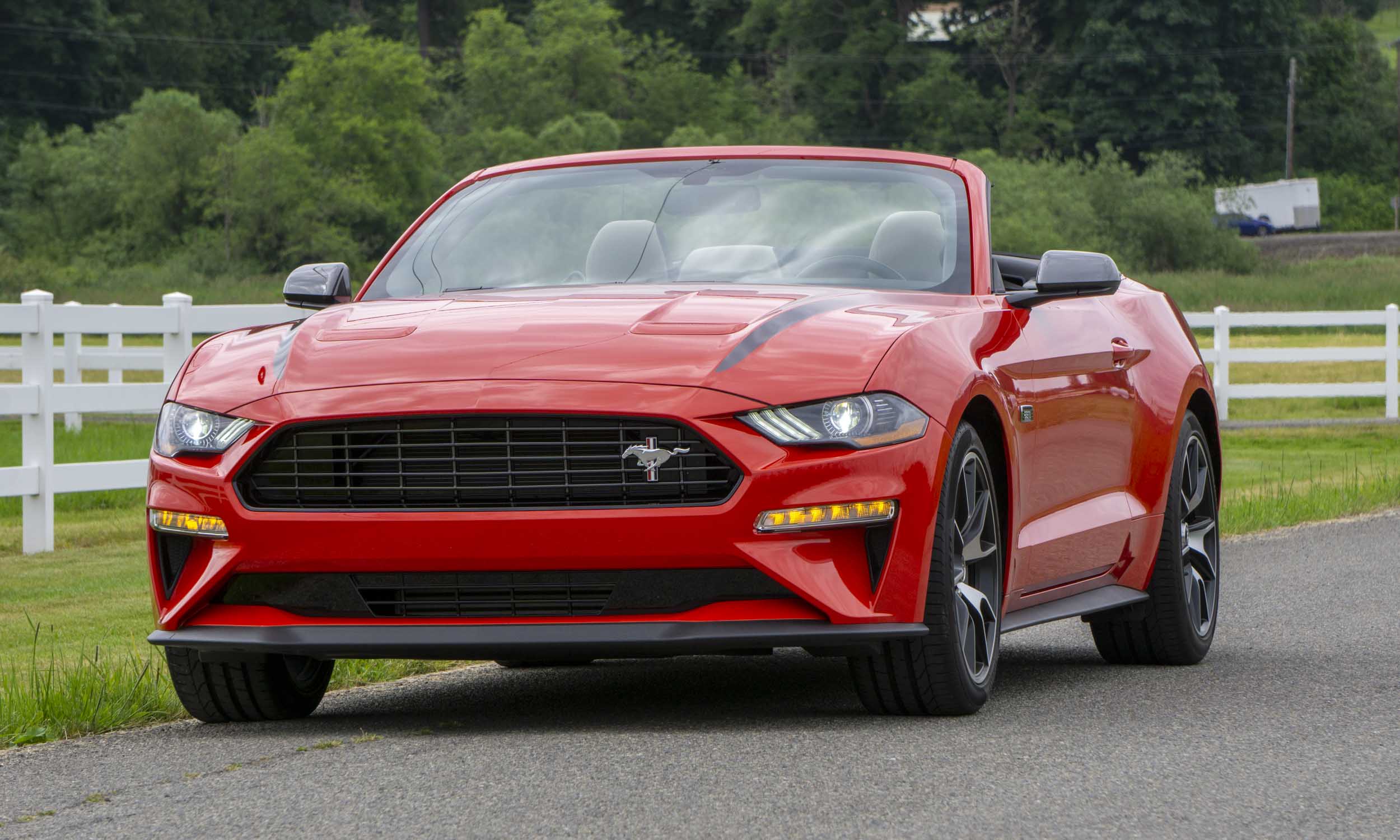 What Is It?
The Ford Mustang is one of the most recognizable cars on the road thanks to continuous design evolution and production since its introduction in 1964. An apt example of the original pony car’s progression and adaptation over the decades is the 2020 Ford Mustang EcoBoost HPP Convertible — Ford’s iconic car is now available with a turbocharged 4-cylinder engine under the hood. We spent a few days with the EcoBoost Ford Mustang equipped with a 6-speed manual gearbox. Although we admit to missing the V8 power and sound, the High-Performance EcoBoost engine is surprisingly powerful and gives the Mustang a contemporary vibe. 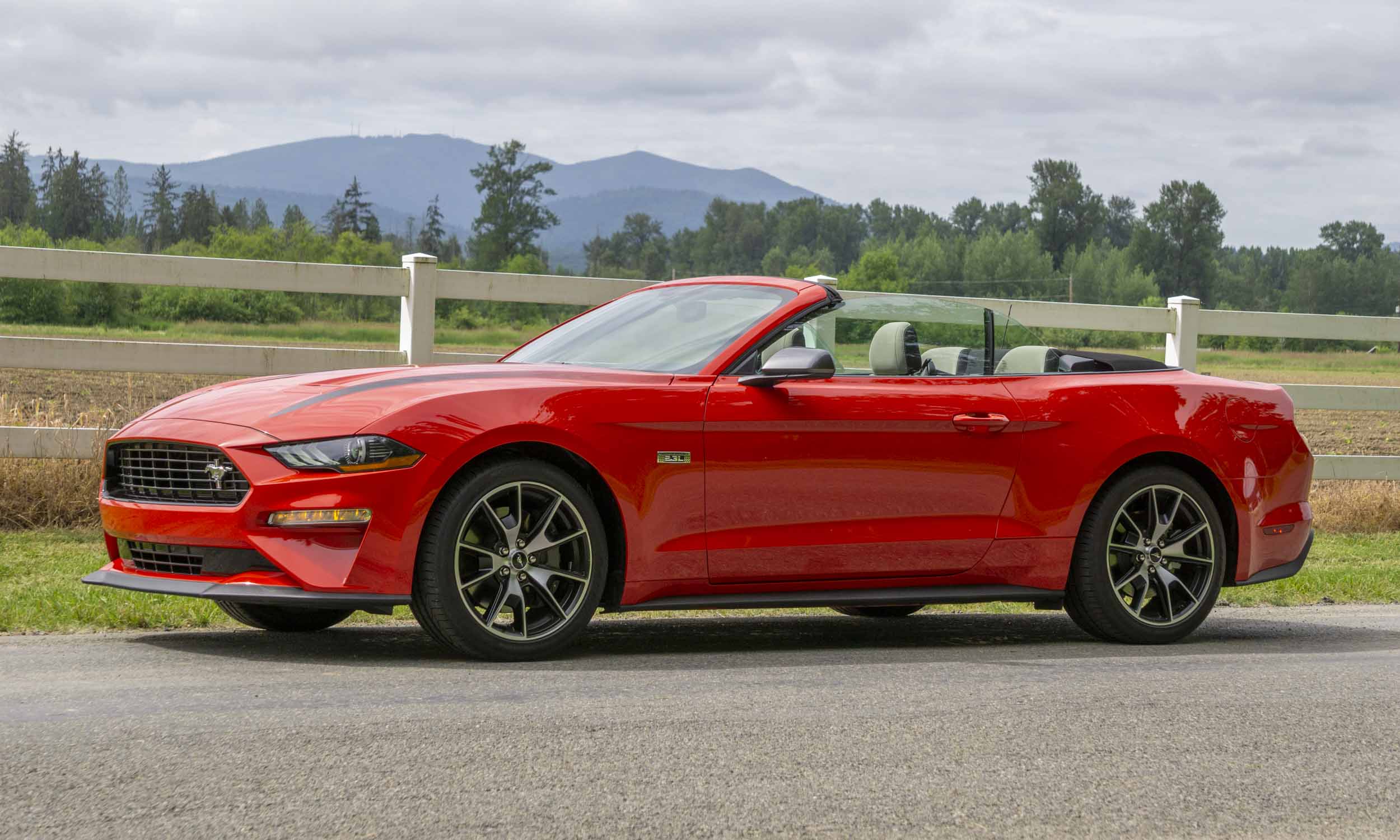 Test Vehicle
Ford provided a 2020 Ford Mustang EcoBoost HPP Convertible painted in Race Red with a black soft-top. Upgrades include the 2.3L EcoBoost High Performance Package and 101A Equipment Group for a total MSRP of $41,005. As a four-seat sporty convertible, the only real competitor to the Mustang Convertible at this price point is the Chevrolet Camaro Convertible — a classic rivalry. 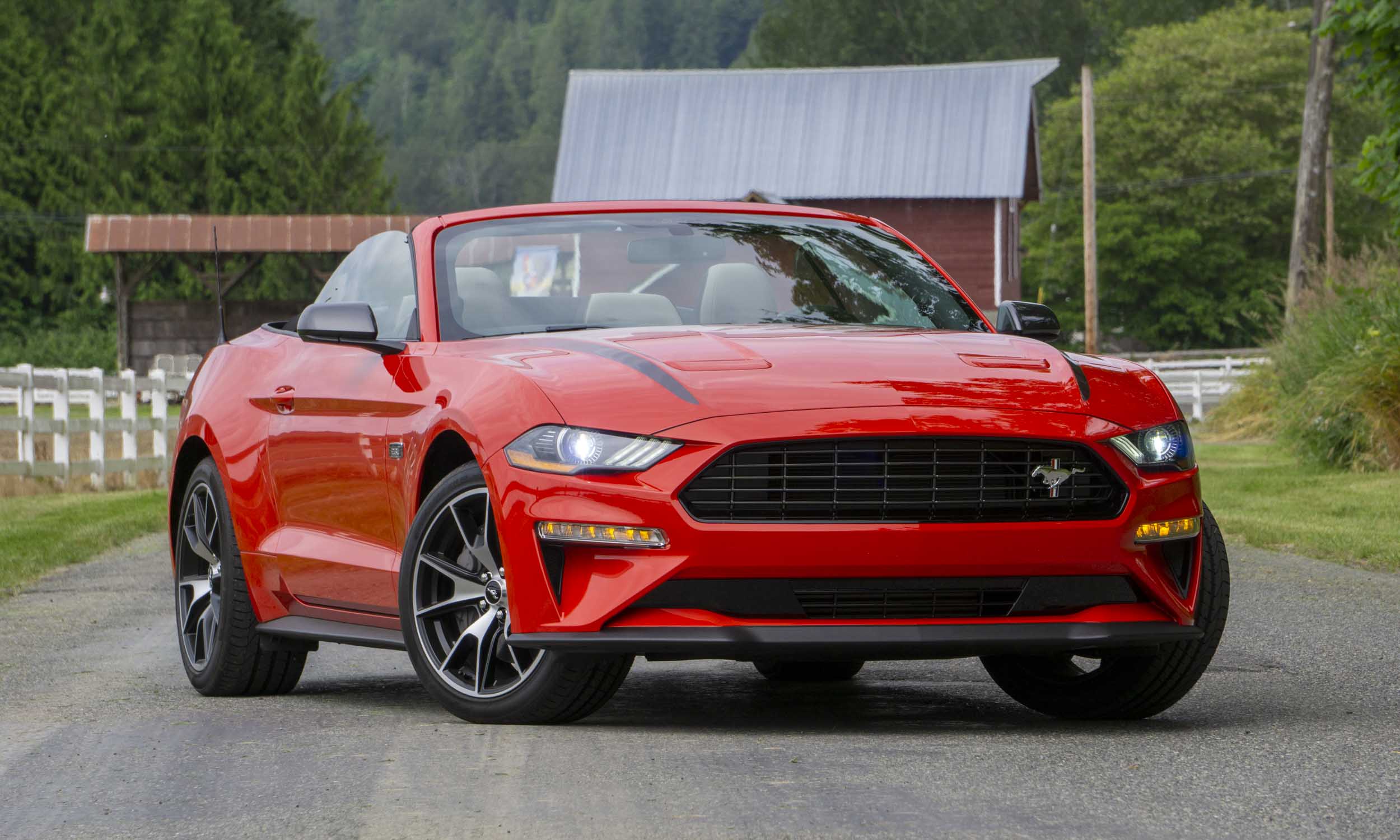 Styling
There’s no mistaking the Mustang Convertible for any other vehicle with its iconic styling cues that range from the classic black grille with offset tri-bar Mustang emblem to the signature sequential taillights. The EcoBoost HPP stand out thanks to a black splitter up front, metallic gray stripes on the hood and 2.3 High Performance badges on the fenders. The standard 19-inch machined-face aluminum wheels are shod with Pirelli Corsa4 high-performance summer tires. 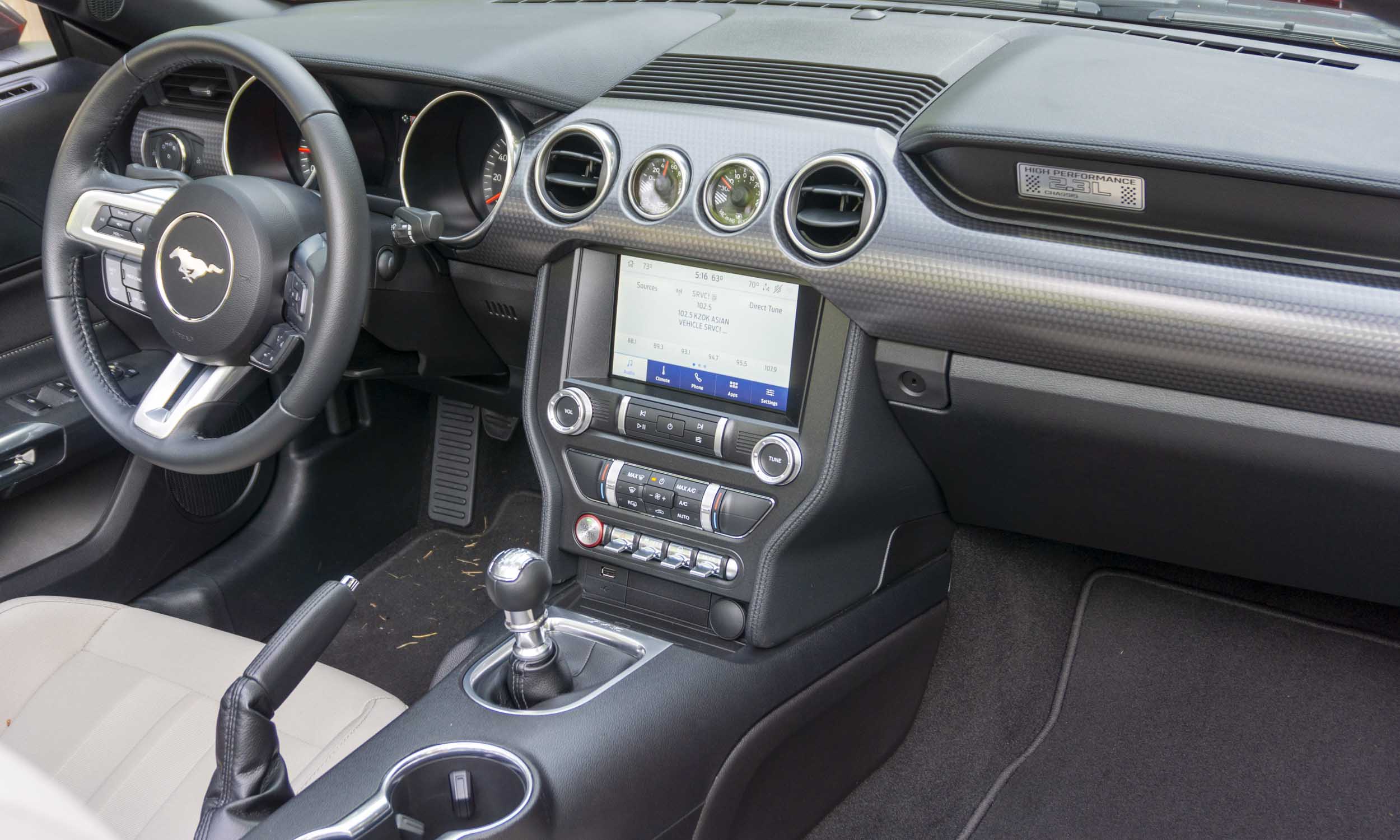 Inner Space
Inside, the HPP adds some nice styling touches including “engine spun” aluminum trim as well as a numbered High Performance 2.3L badge on the dashboard. Adding a sporty feeling are center-mounted oil pressure and turbo boost gauges. Our test vehicle also came with SYNC3 — Ford’s latest communication and entertainment system — which features voice recognition, Apple CarPlay and Android Auto, as well as an easy-to-read 8-inch touchscreen display. We like the styling of toggle switches for stability control, steering and drive mode settings next to the Start button. 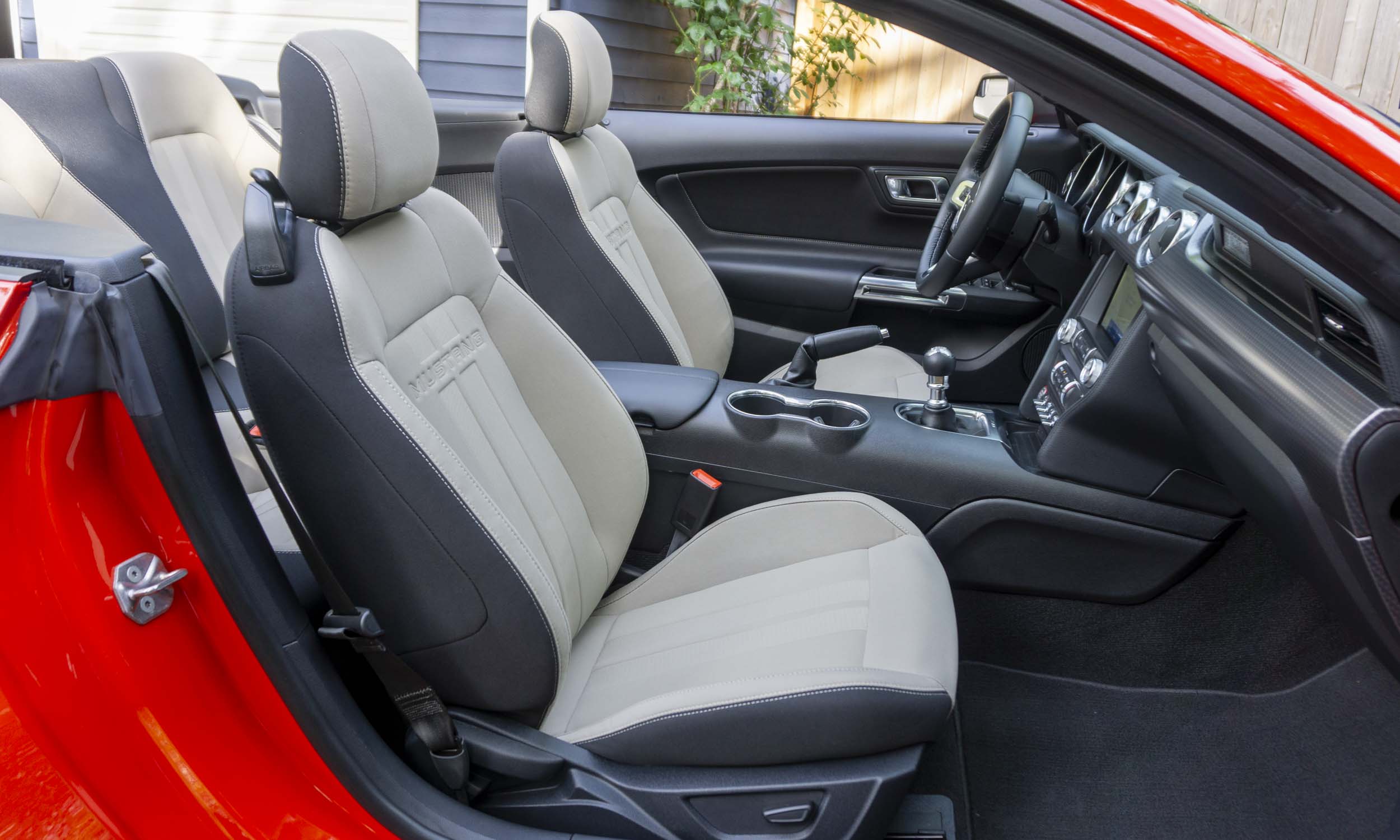 Front Seats
The 2020 Ford Mustang EcoBoost HPP Convertible has comfortable seats with side bolsters that provide decent support when the road gets twisty. We noticed and appreciate the light-colored seat fabric which stays cooler on hot, sunny days when the top gets left open. 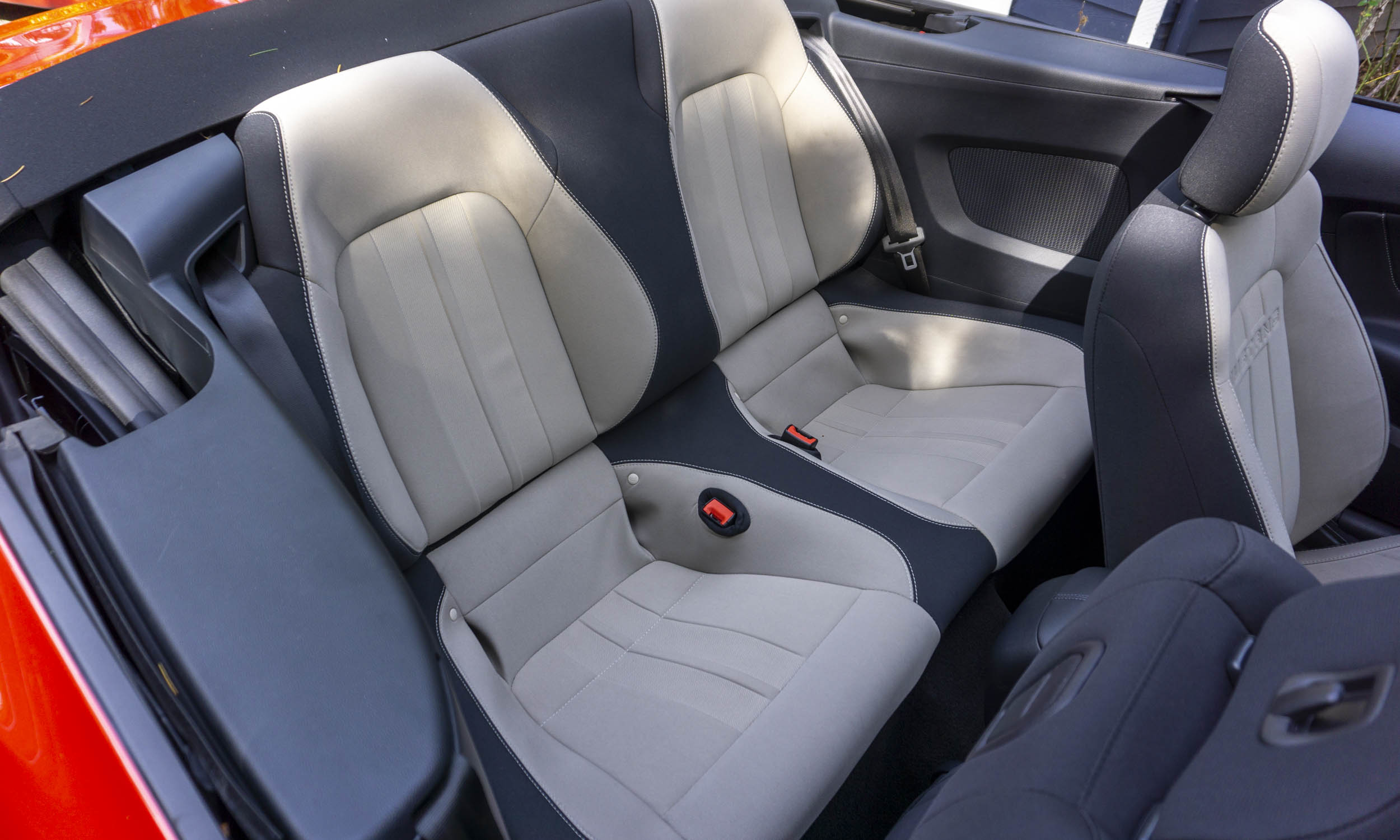 Rear Seats
With the convertible top of the 2020 Ford Mustang EcoBoost HPP Convertible open, access to the rear seat is extremely easy. Passengers drop into low seats that offer decent space for everything except adult legs, making the rear seats better suited for children. With the top closed it takes a bit more effort to climb in back. 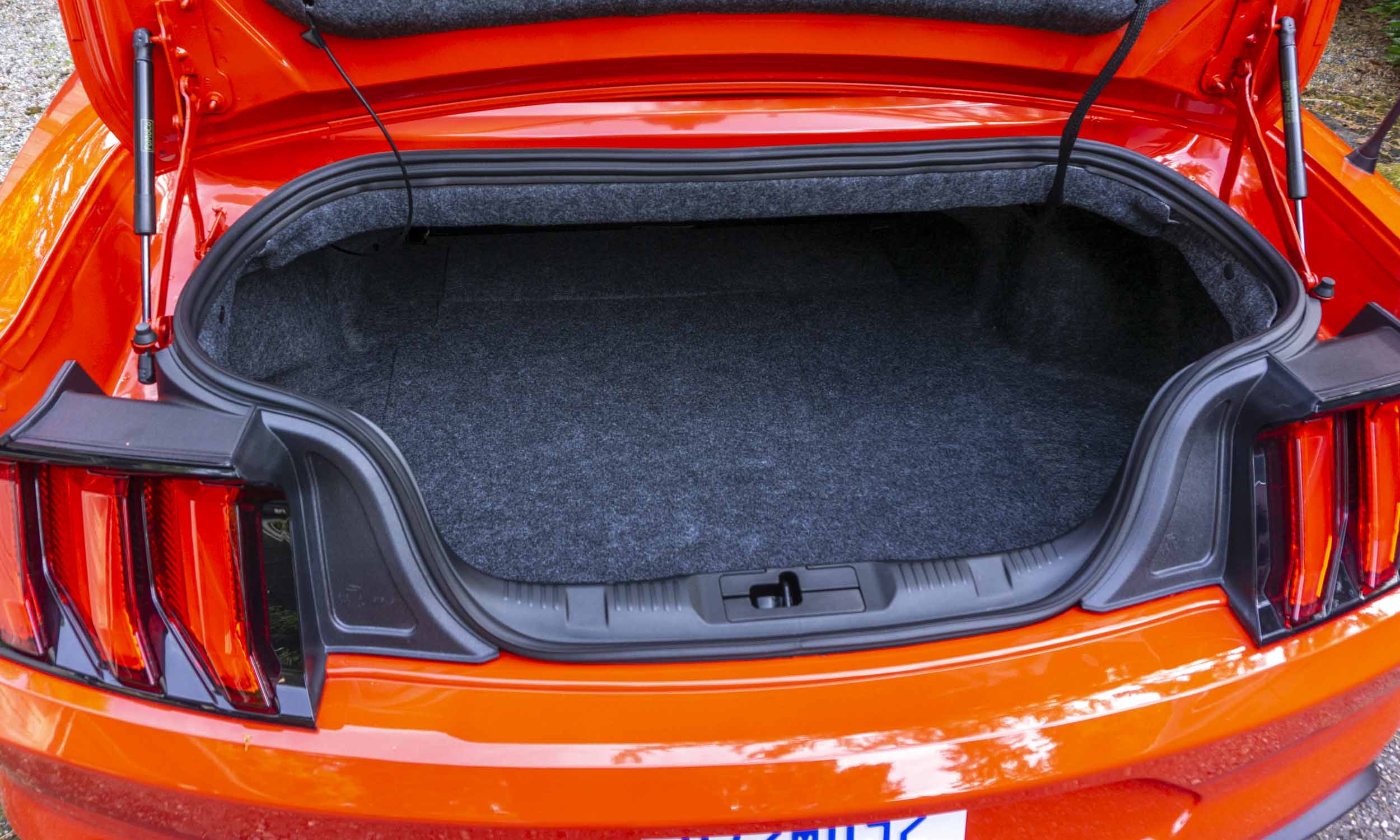 Trunk Space
The trunk of the 2020 Ford Mustang EcoBoost HPP Convertible is shallow with a relatively small opening; however, there is enough room for groceries or two small overnight bags. Trunk space is not affected by the top being up or down. 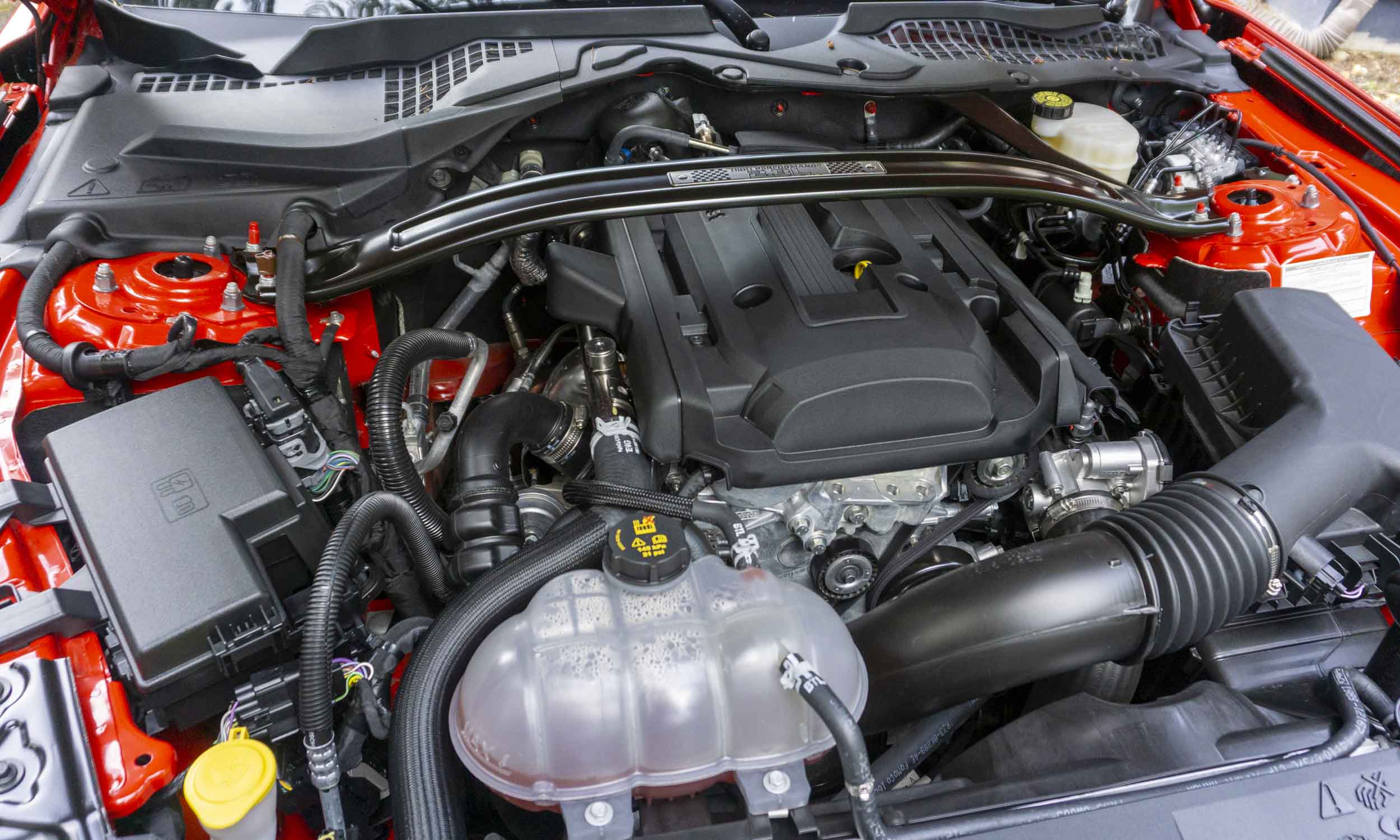 Under the Hood
Our test Mustang came equipped with Ford’s optional 2.3-liter High-Performance EcoBoost engine. This turbocharged 4-cylinder engine originated as the powerplant in the Focus RS. In the 2020 Ford Mustang EcoBoost HPP Convertible the engine generates 330 horsepower and 350 lb-ft of torque, making it the most powerful inline 4-cylinder unit by an American automaker, according to Ford. This High-Performance version upgrades the standard EcoBoost powertrain with a larger twin-scroll turbo compressor, a larger radiator and updated engine calibration. Power gets sent to the rear wheels via a Getrag 6-speed manual gearbox — an optional 10-speed automatic transmission costs an additional $1,595. 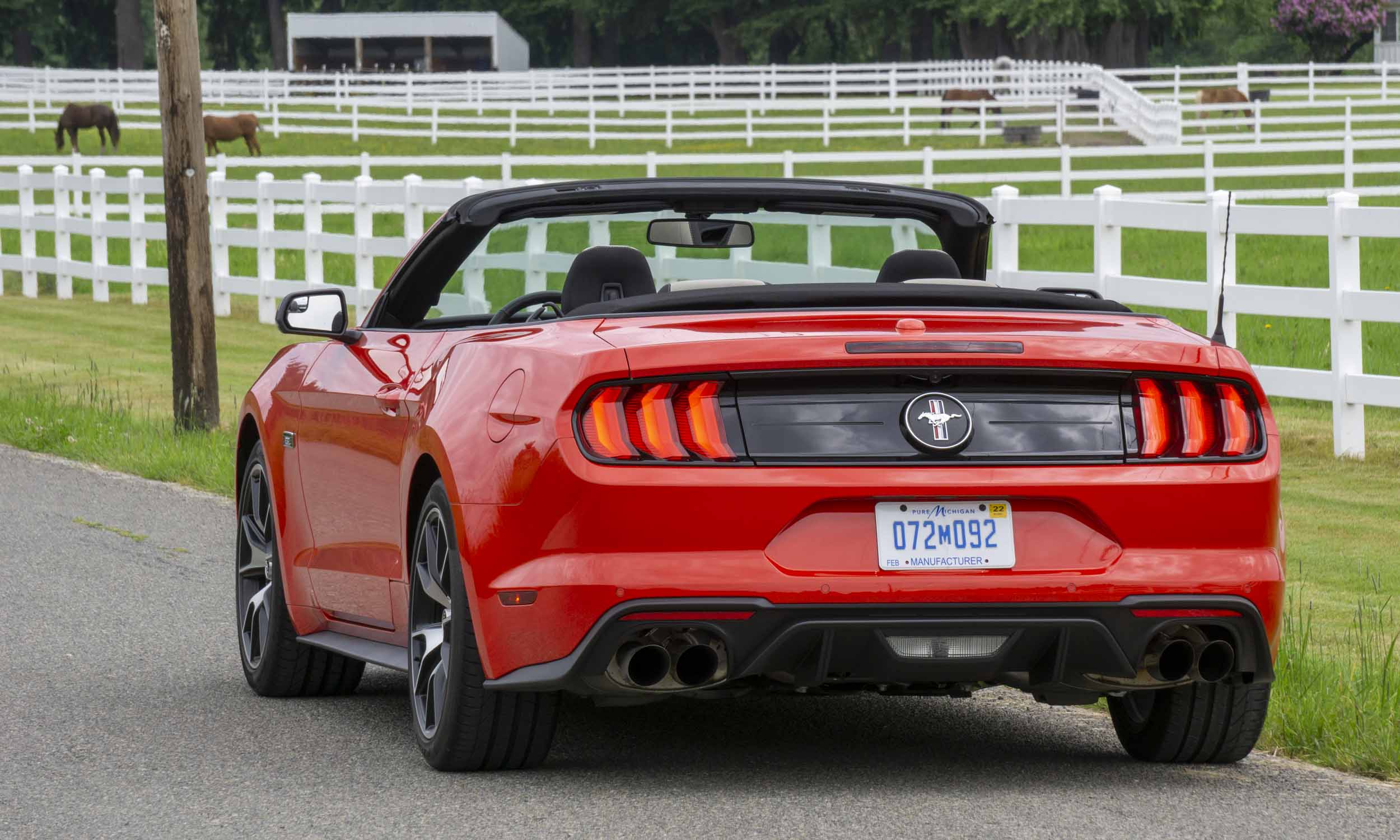 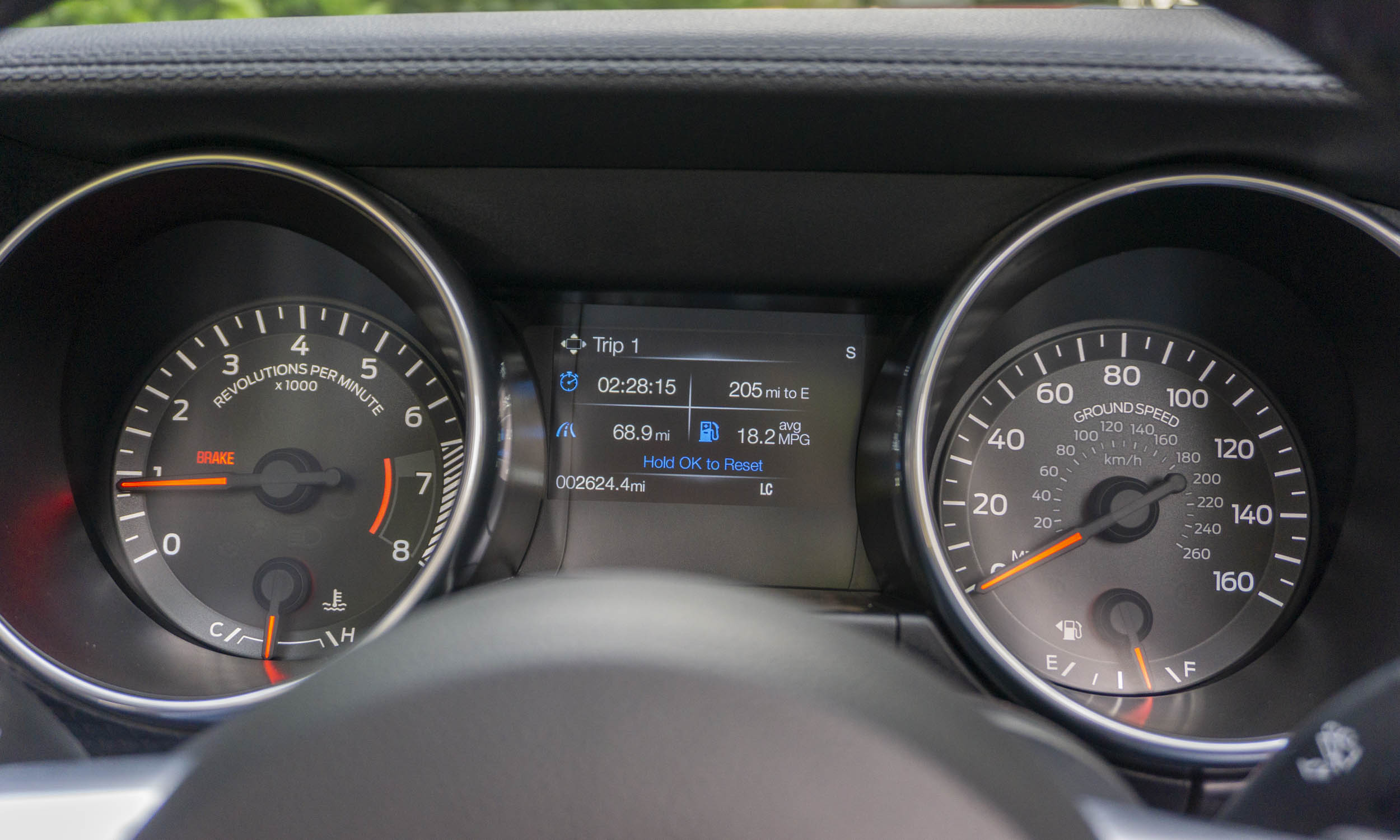 Fuel Economy
One big advantage of the 2020 Ford Mustang EcoBoost HPP Convertible’s turbocharged 4-cylinder engine has over the V8 is improved fuel economy. The High-Performance EcoBoost is rated at 19 mpg city / 26 mpg hwy / 22 mpg combined. As we have discovered when piloting other EcoBoost-powered Fords, the driver often faces a tough choice of Eco or Boost — a heavy right foot provides plenty of power, but of course fuel economy suffers. During our time in the Mustang the onboard instrumentation calculated about 18.2 mpg overall — someone’s right foot might have had some influence on that number. 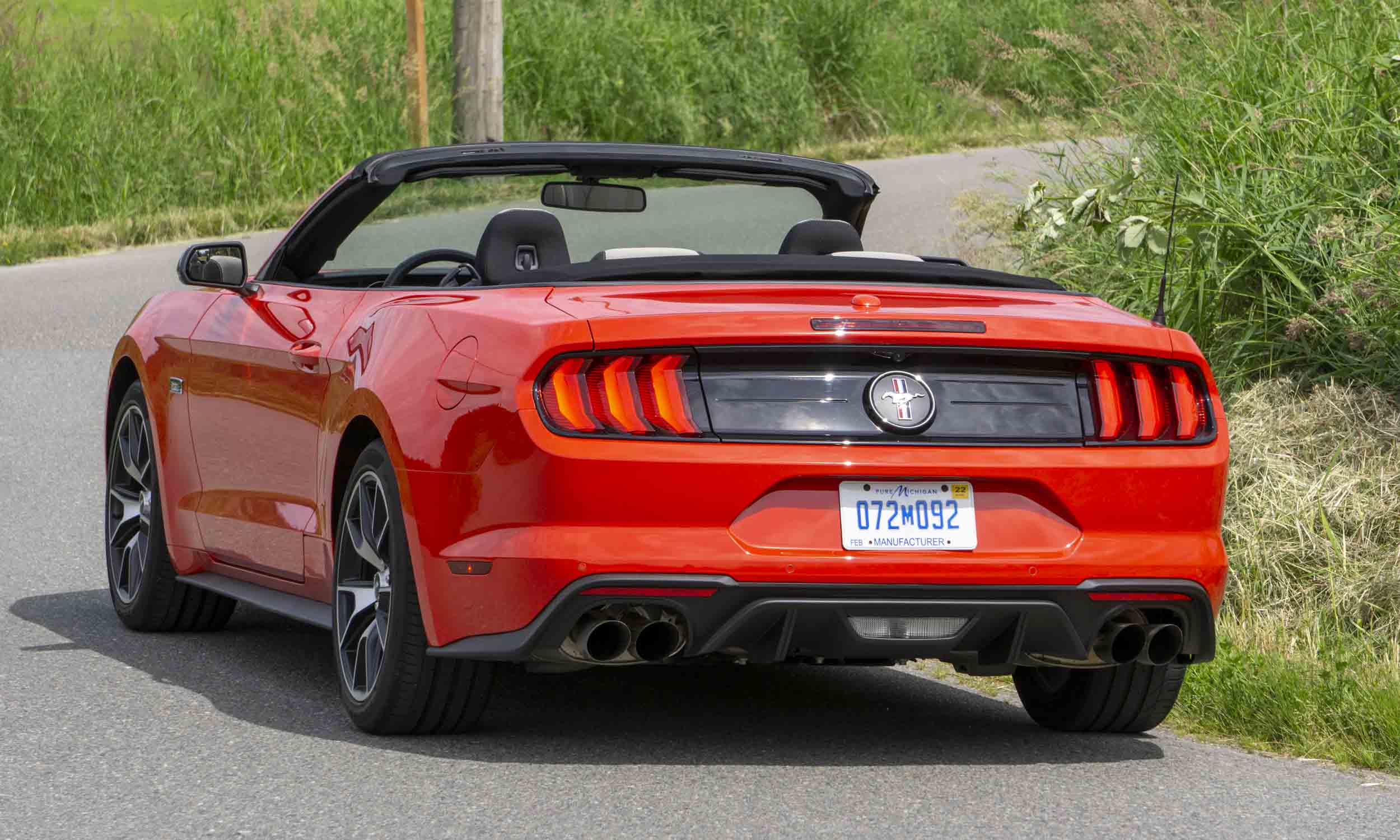 On the Road
With 330 horsepower, a manual gearbox, rear-wheel drive and an open roof, the 2020 Ford Mustang EcoBoost HPP Convertible makes it easy to let the good times roll. With a smooth shifter and light clutch, acceleration is strong and satisfying when rowing through the gears. The convertible’s steering is precise and provides decent feedback, so the Mustang becomes even more fun when the road gets twisty thanks to predictable handling, strong brakes and the ability to accelerate quickly out of turns. That said, this Mustang does feel somewhat large for a sports car, but it handles its size well. 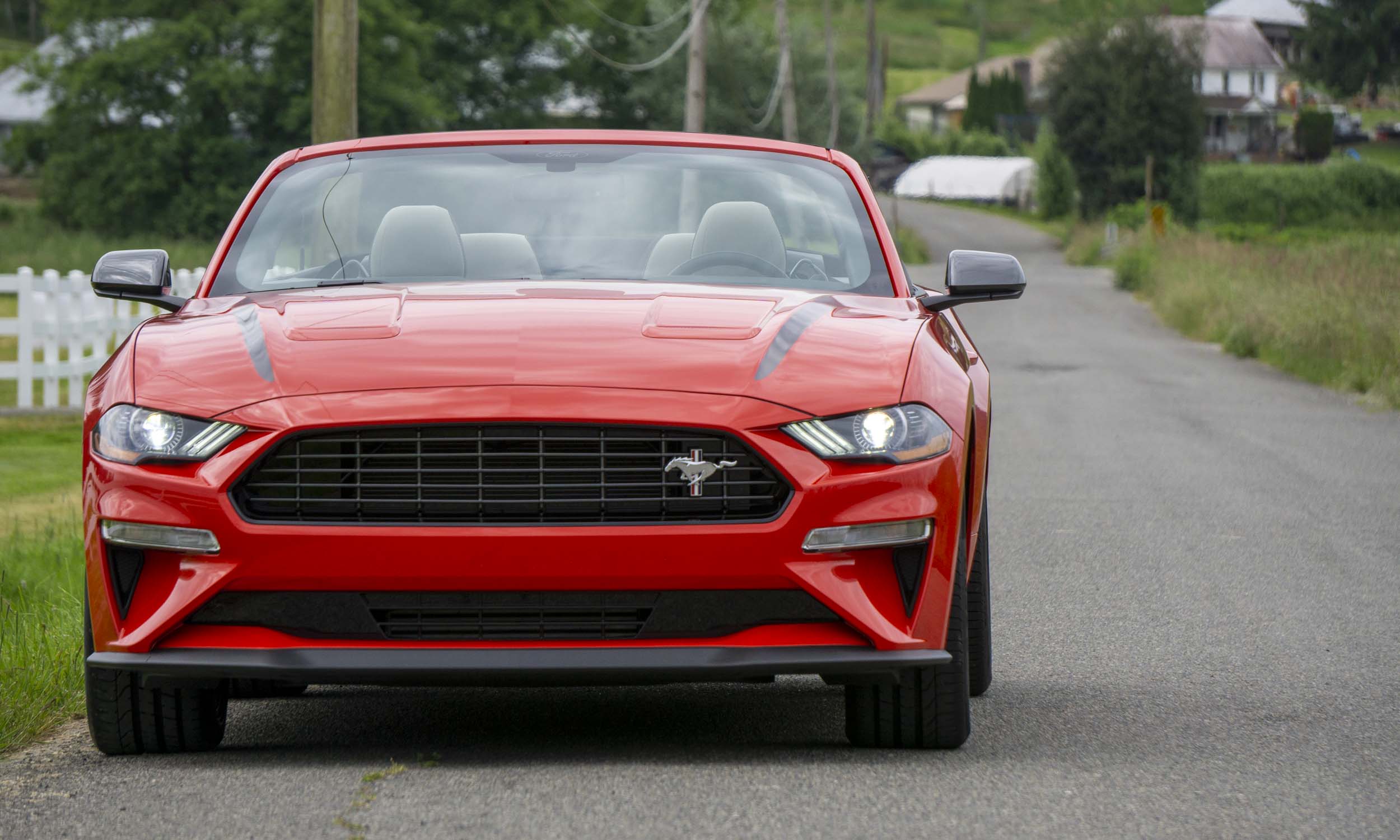 Nice Cruiser
As good as the Mustang is in the corners, it also works well as a highway cruiser with a ride that doesn’t feel overly stiff. With the top down and windows up the wind is not too turbulent, so it’s possible to carry on a conversation. The top easily folds up or down with the push of a button, and when open the top tucks nicely behind the rear seats. 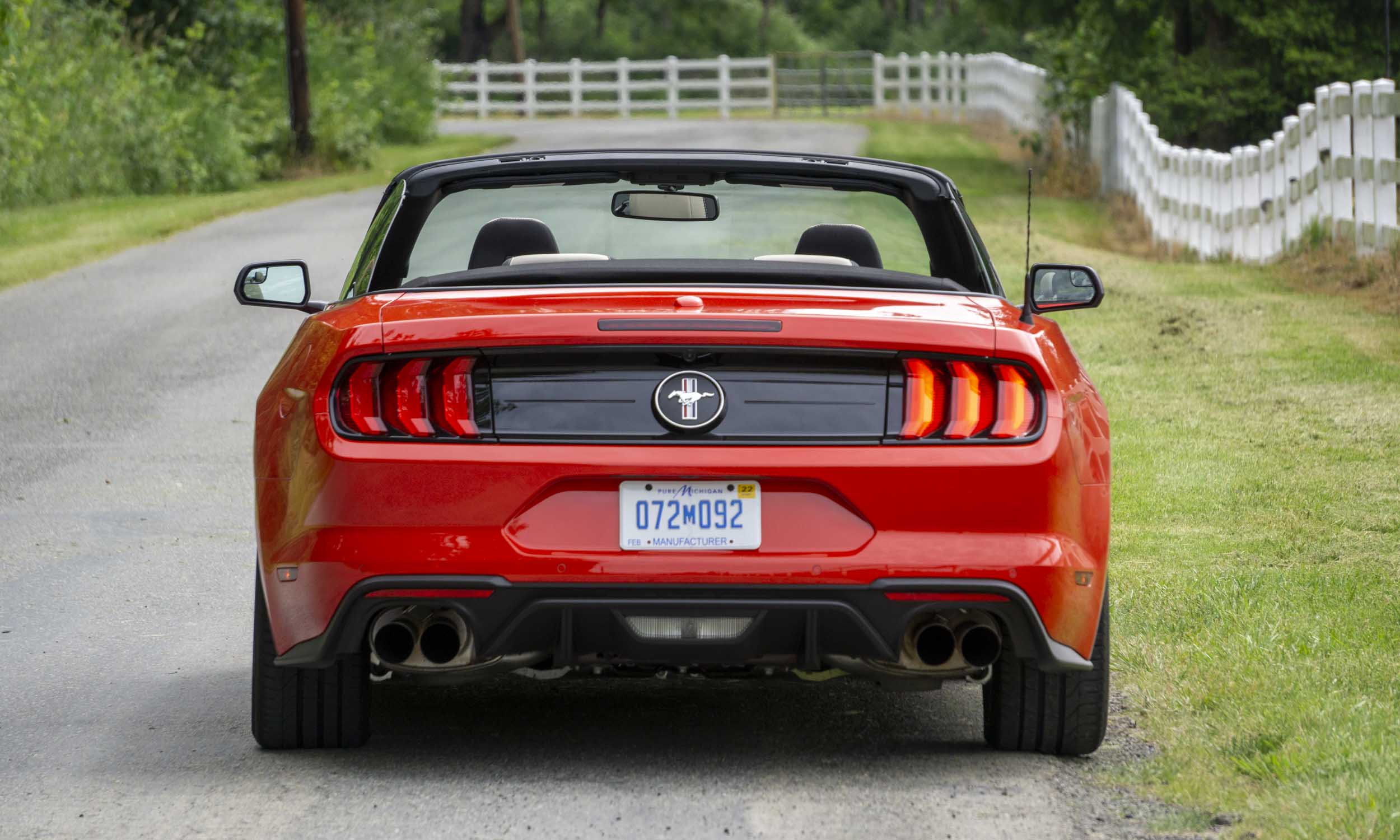 Unexpected Exhaust Note
Although the EcoBoost engine provides plenty of power, the four cylinder’s exhaust note is not what we expected. The sound that emerges from the quad pipes is akin to a tuned Honda Civic — it’s not a bad sound, but it does seem odd coming out of a Mustang. 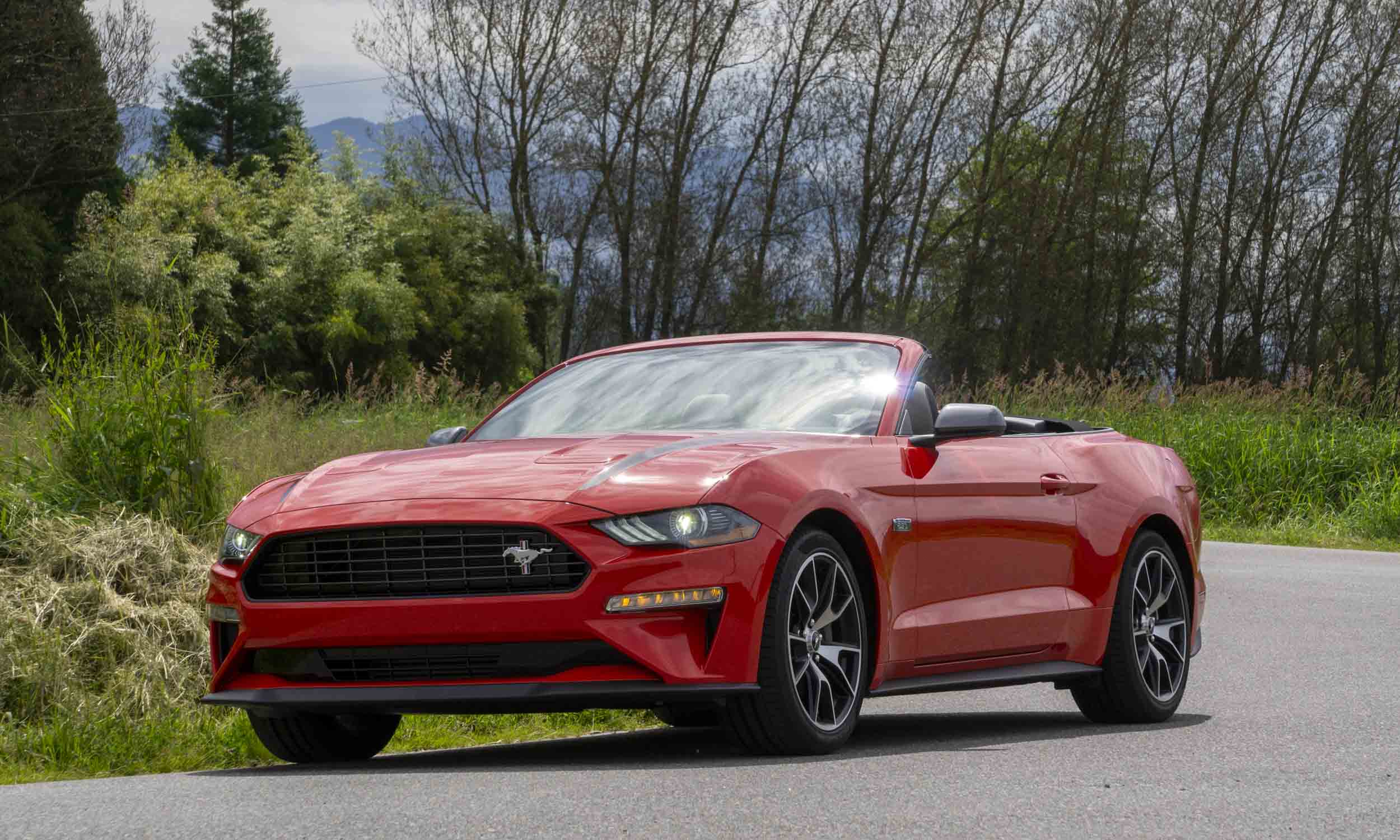 Rating: 8.5
A turbocharged 4-cylinder engine in a Mustang might seem like sacrilege to some, but with impressive power output as well as high fuel-economy ratings, the EcoBoost powerplant certainly makes an effective alternative to the quintessential V8. Add in the iconic Mustang styling along with its fun driving characteristics and the EcoBoost HPP Mustang is certainly a great choice, especially for a four-seat convertible. 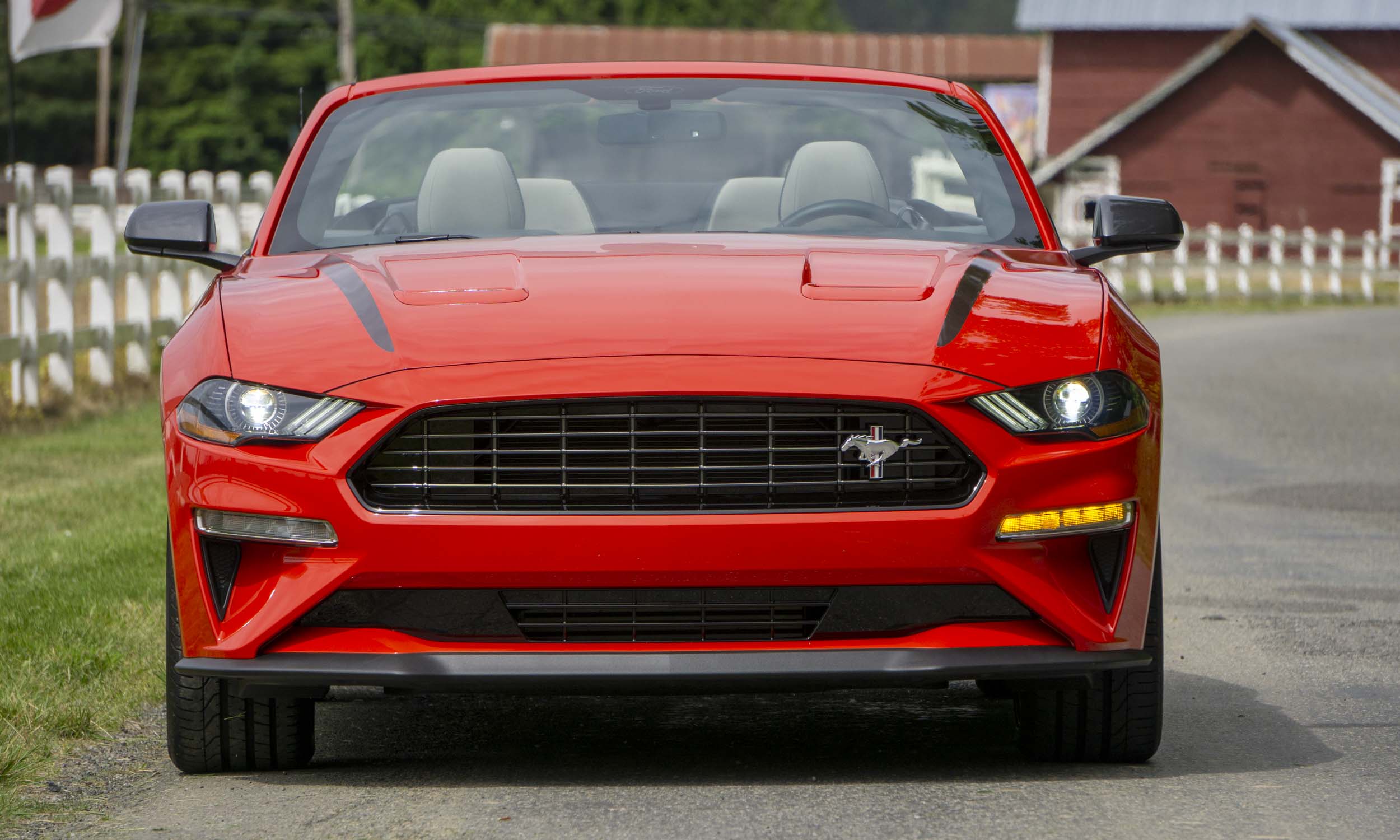 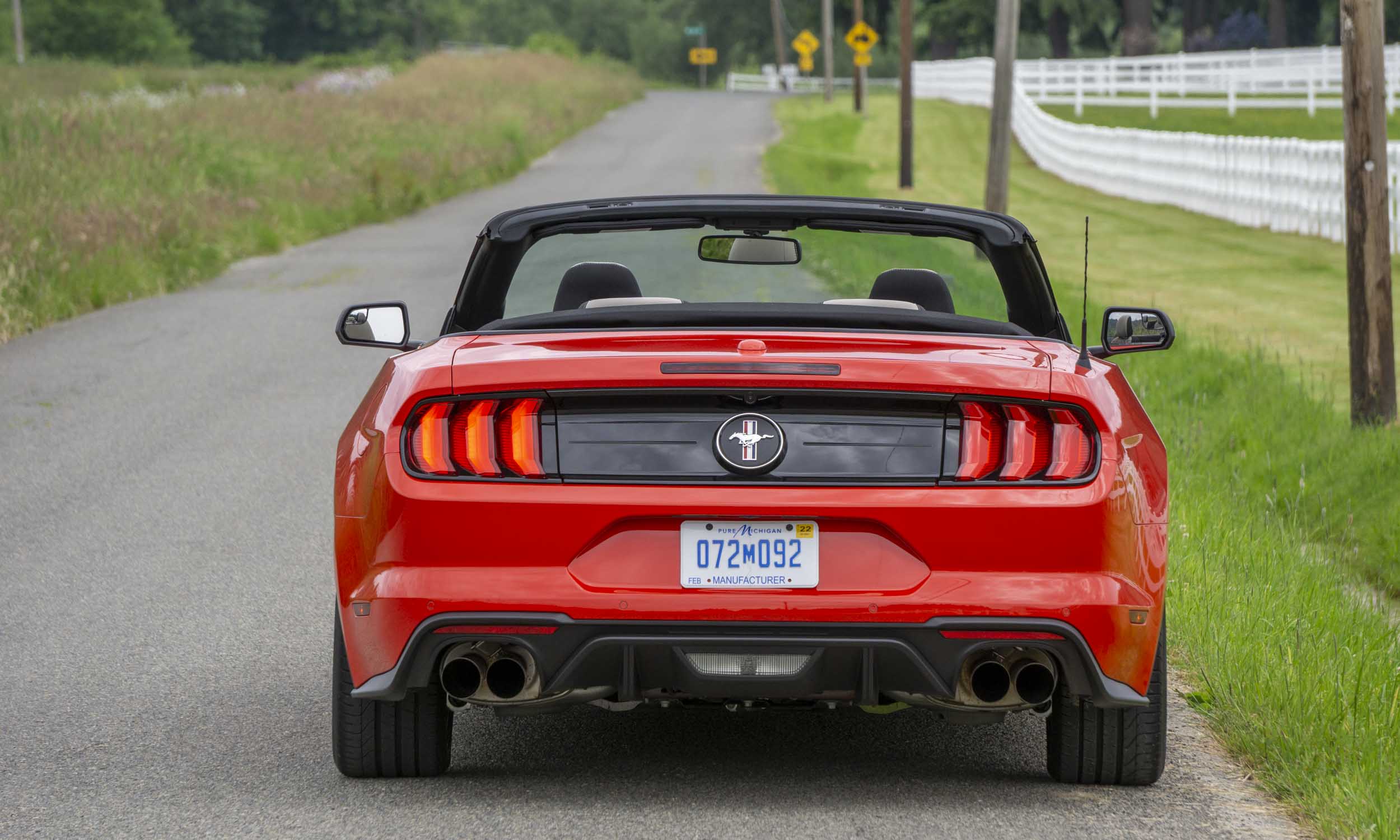 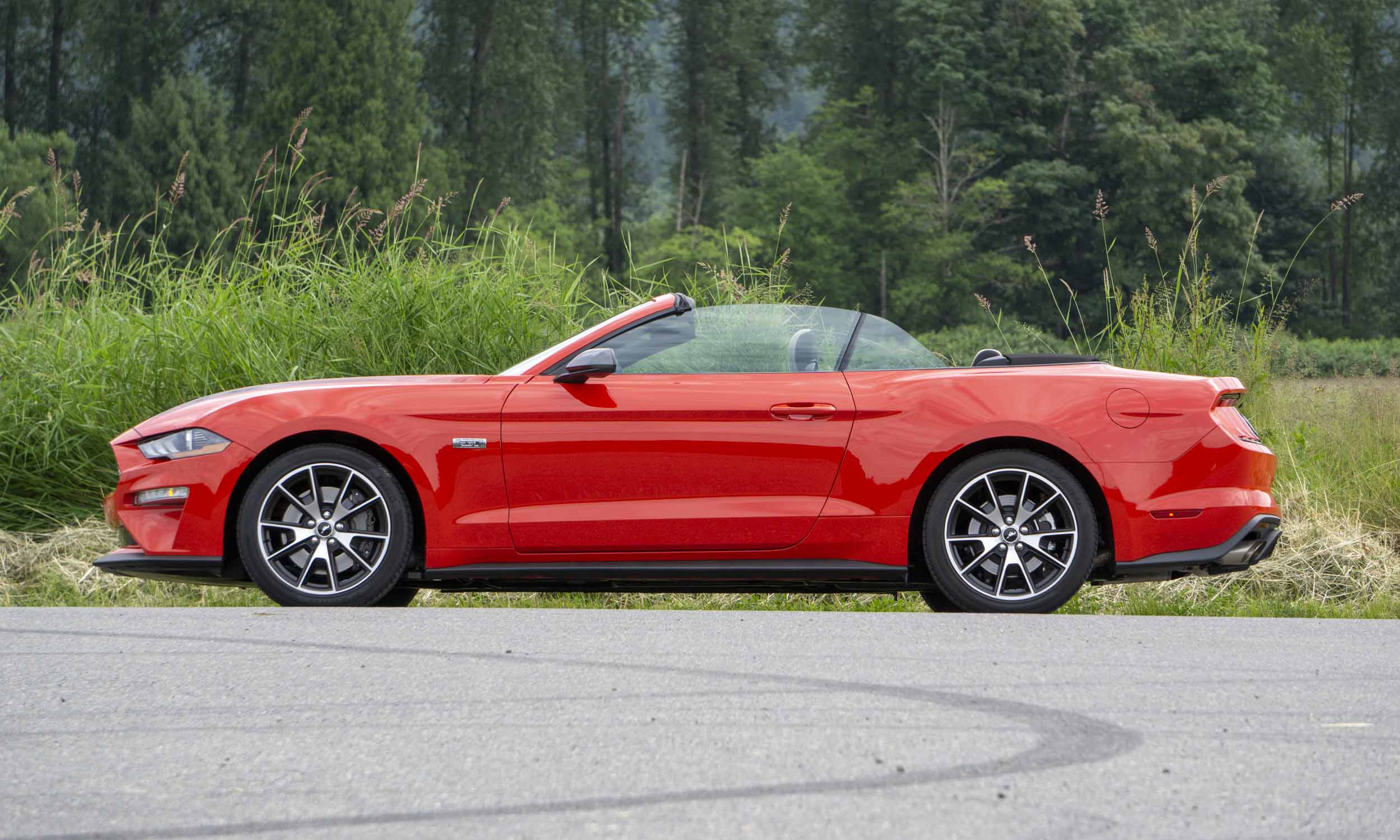 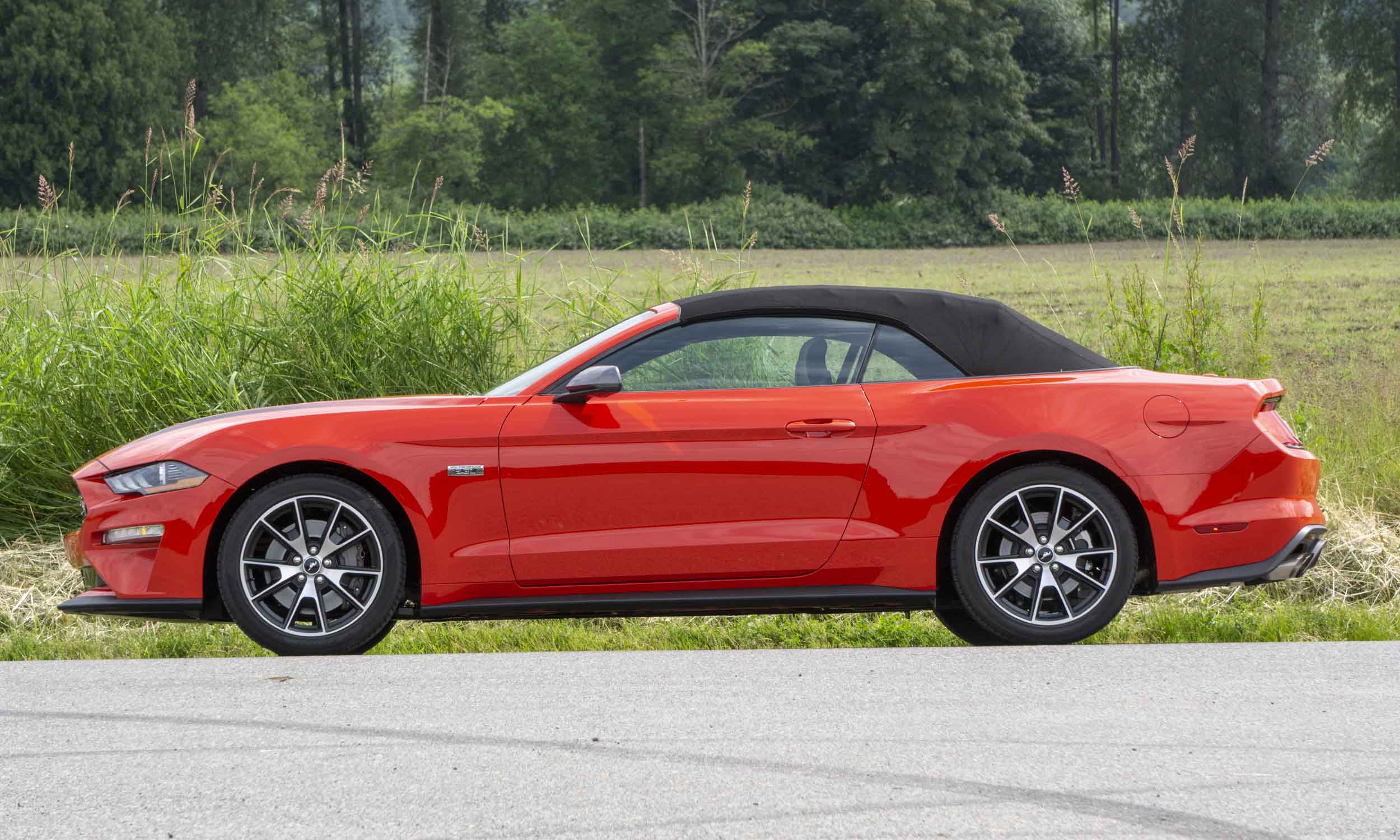 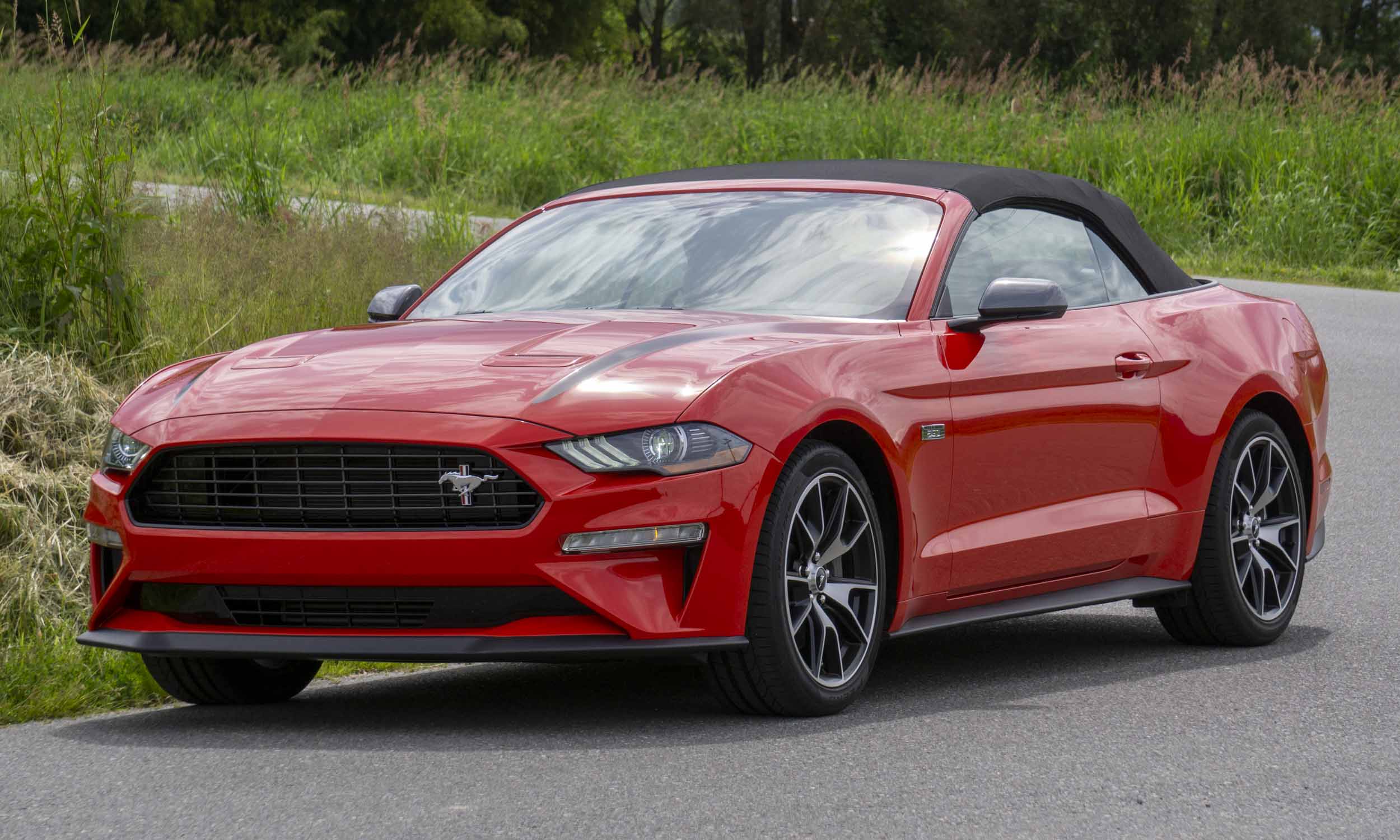 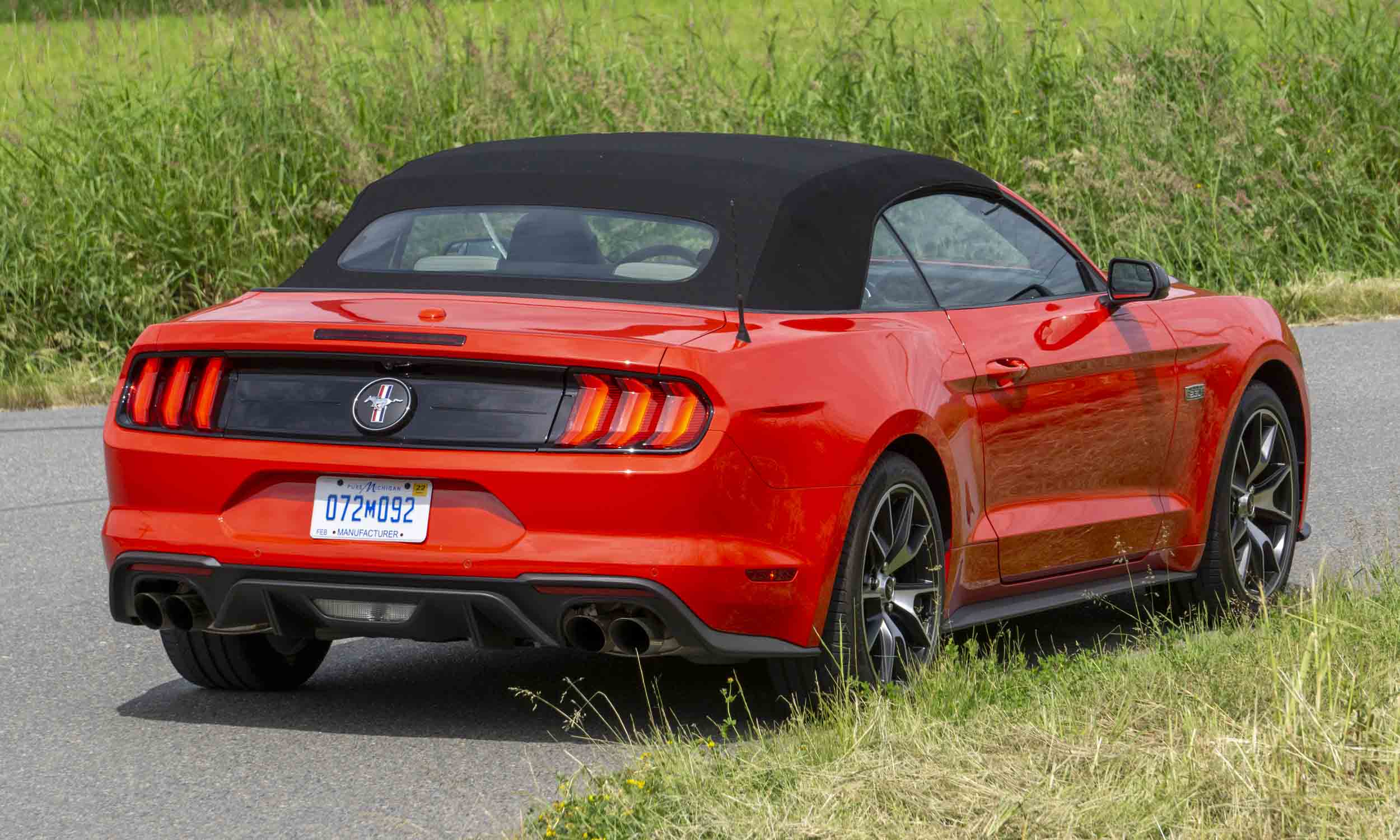 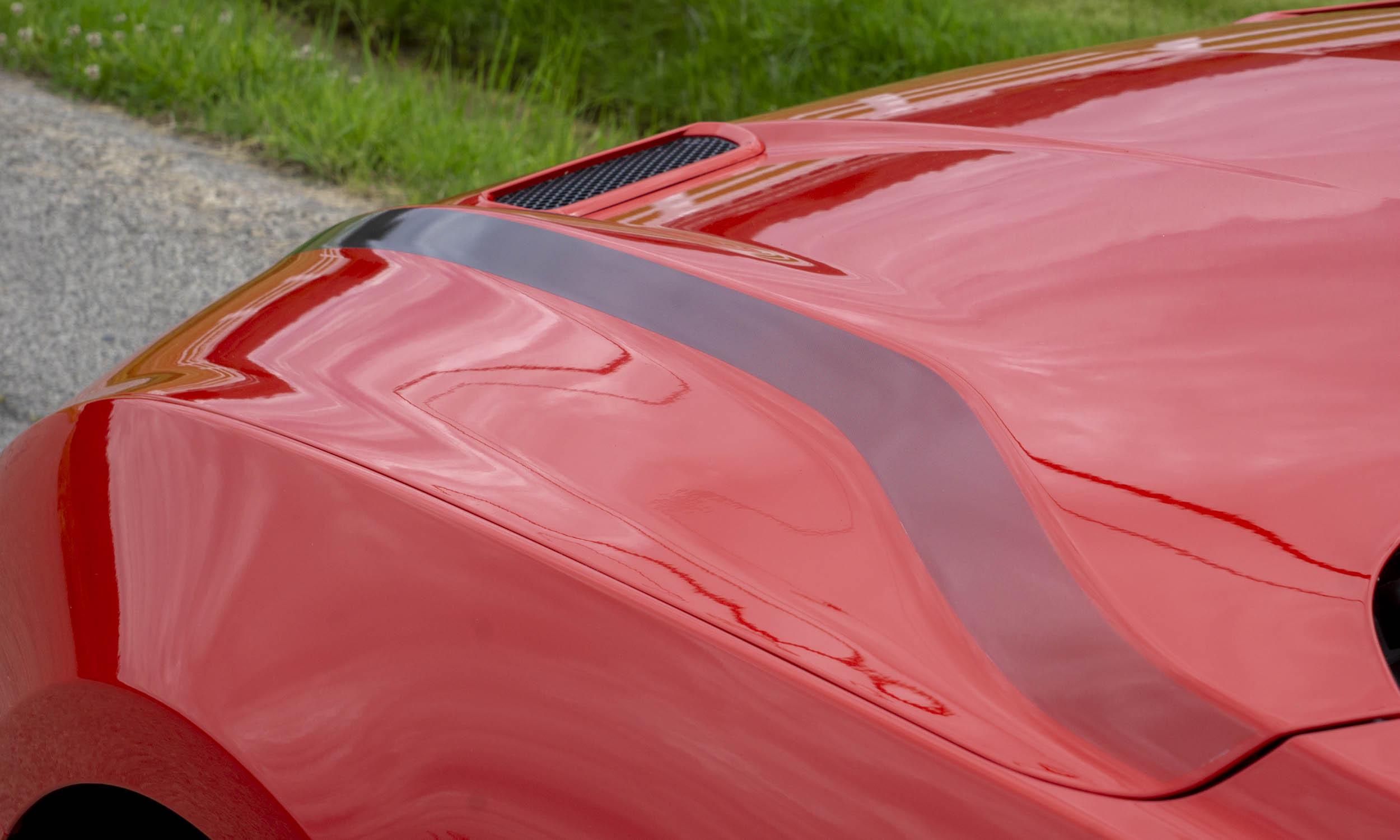 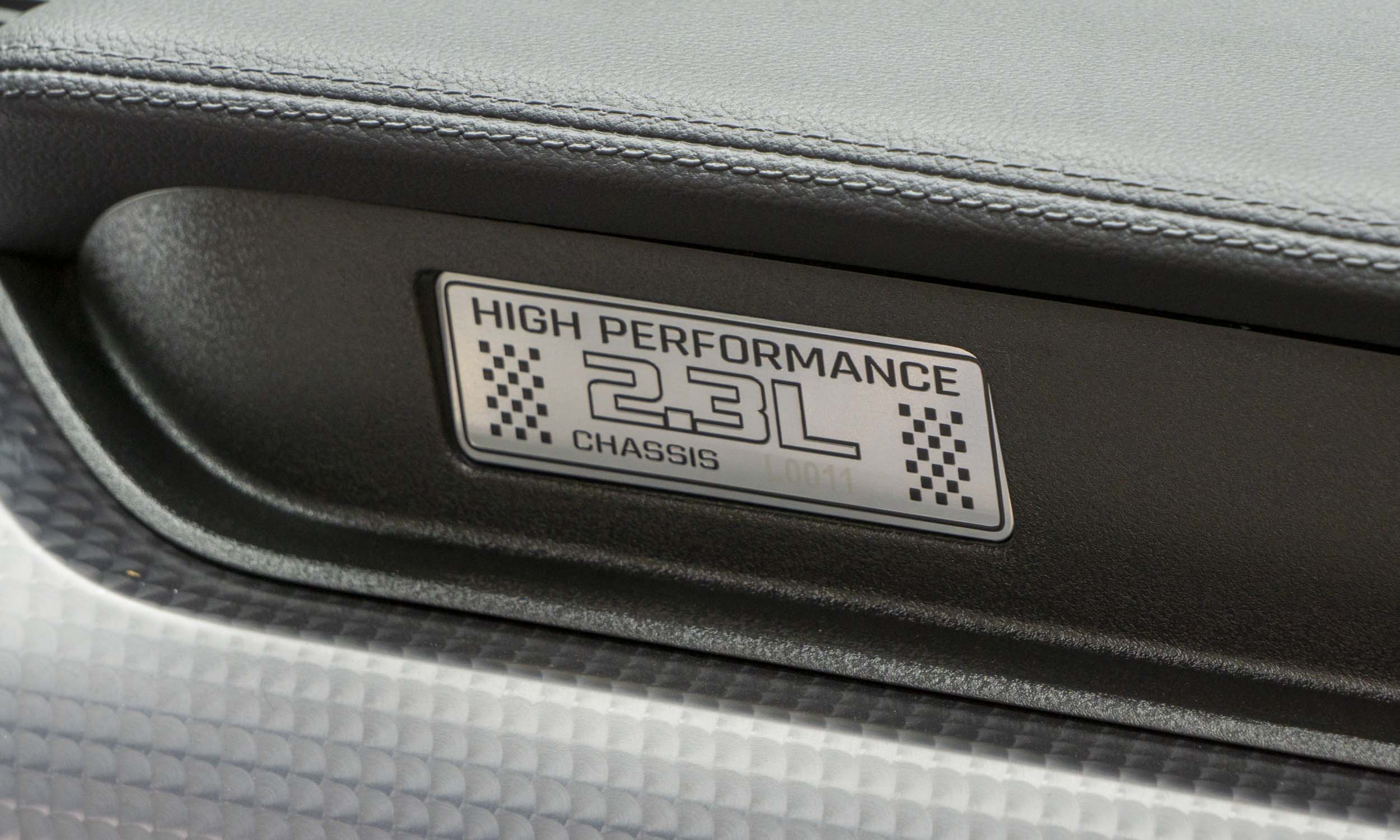 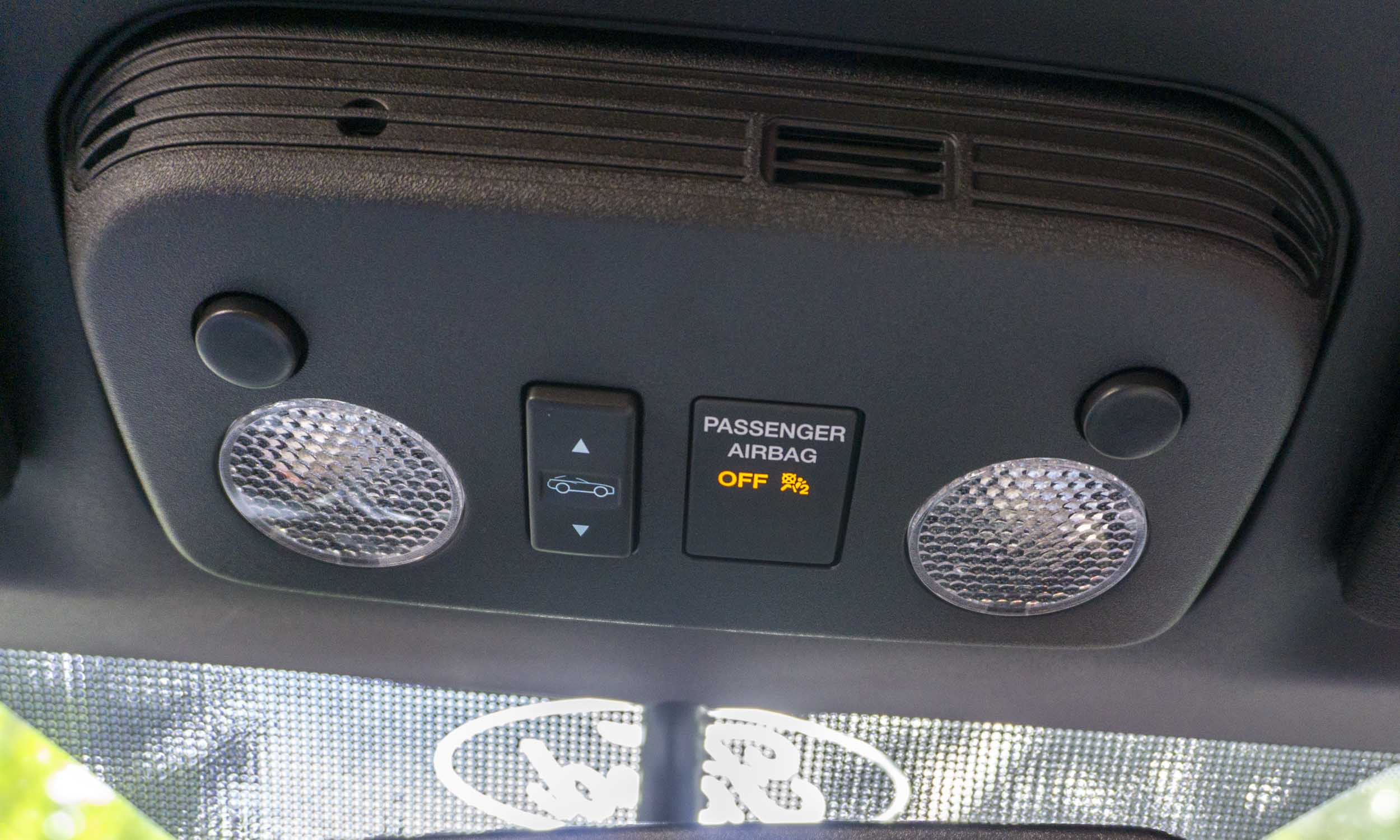 2020 Ford Mustang EcoBoost Convertible
Convertible opens or closes with the push of this button. 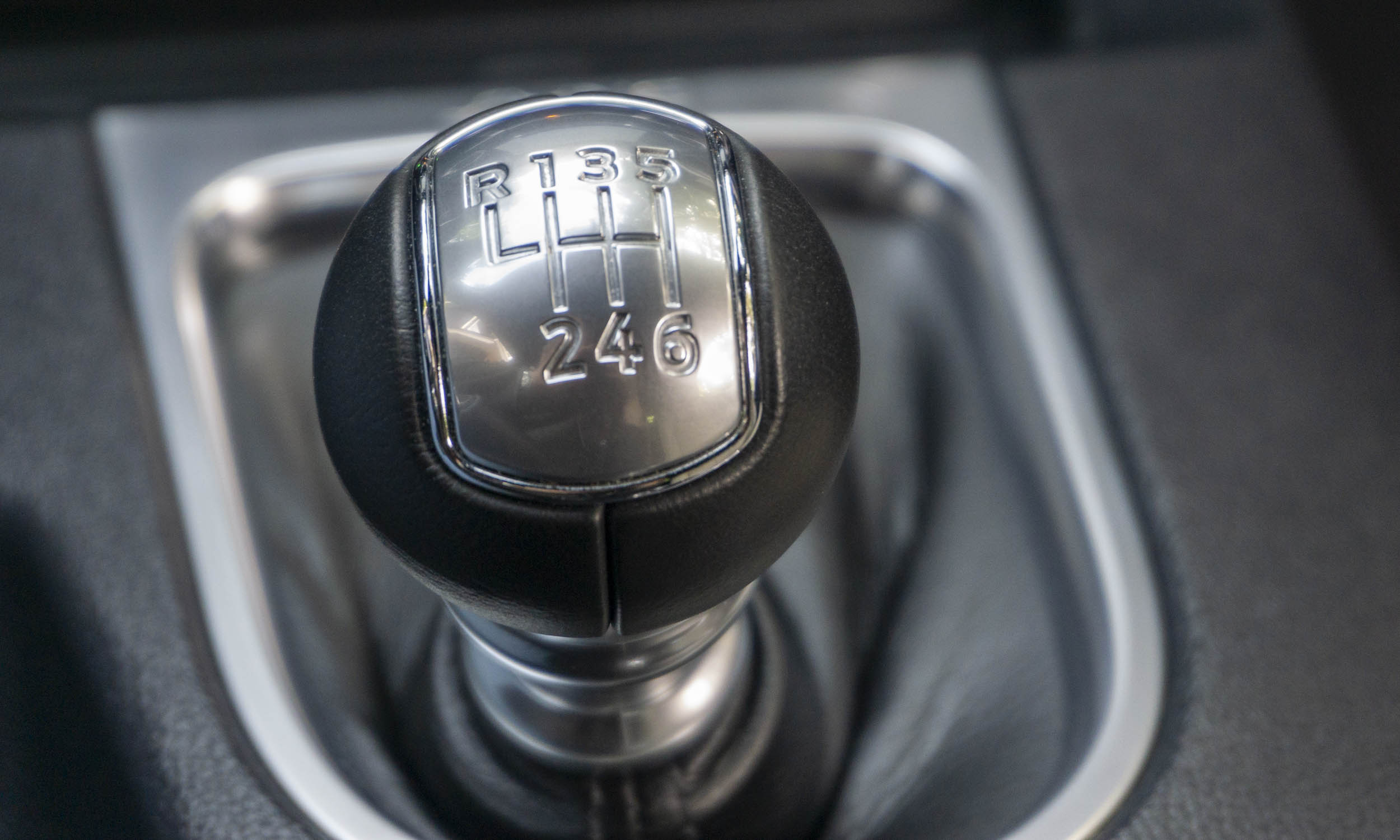 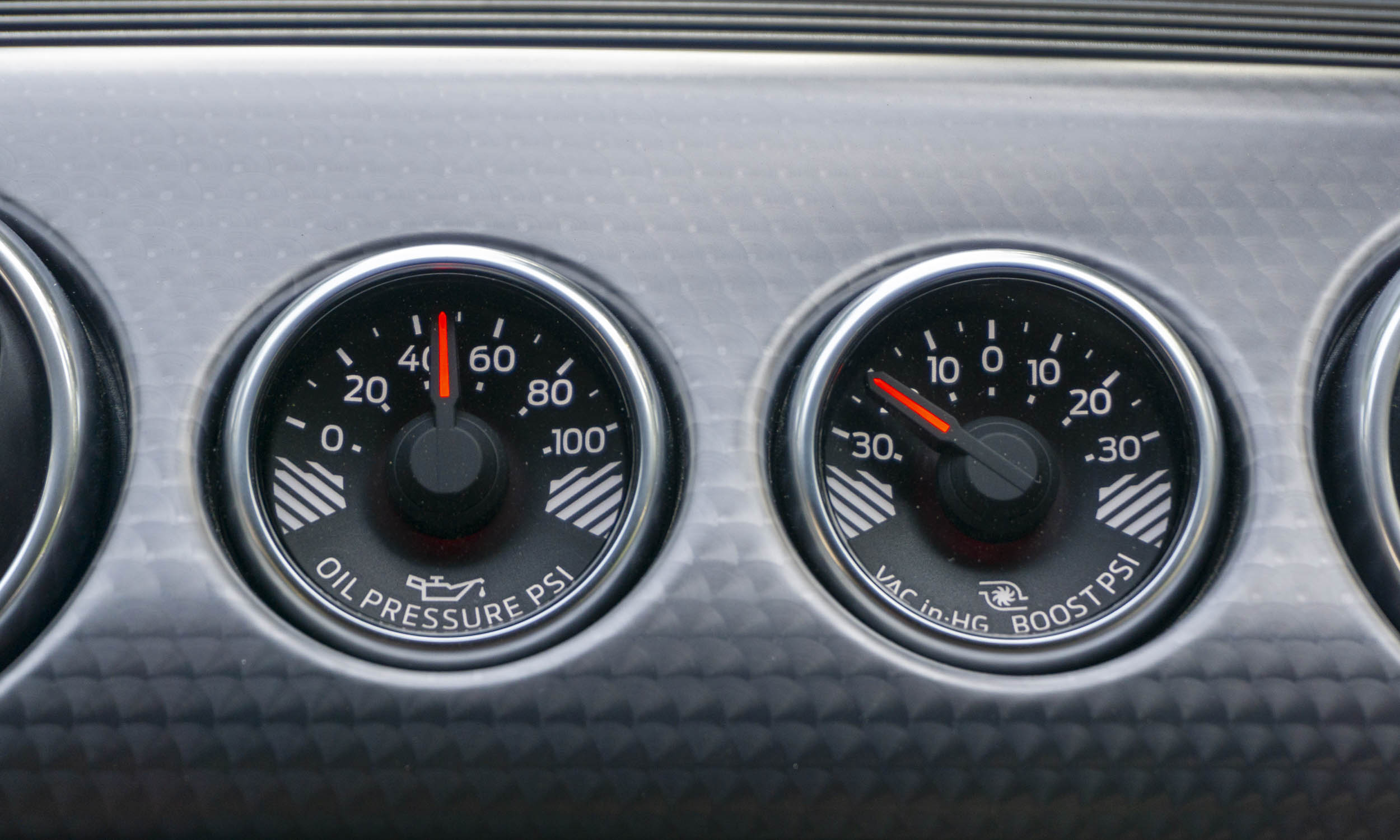 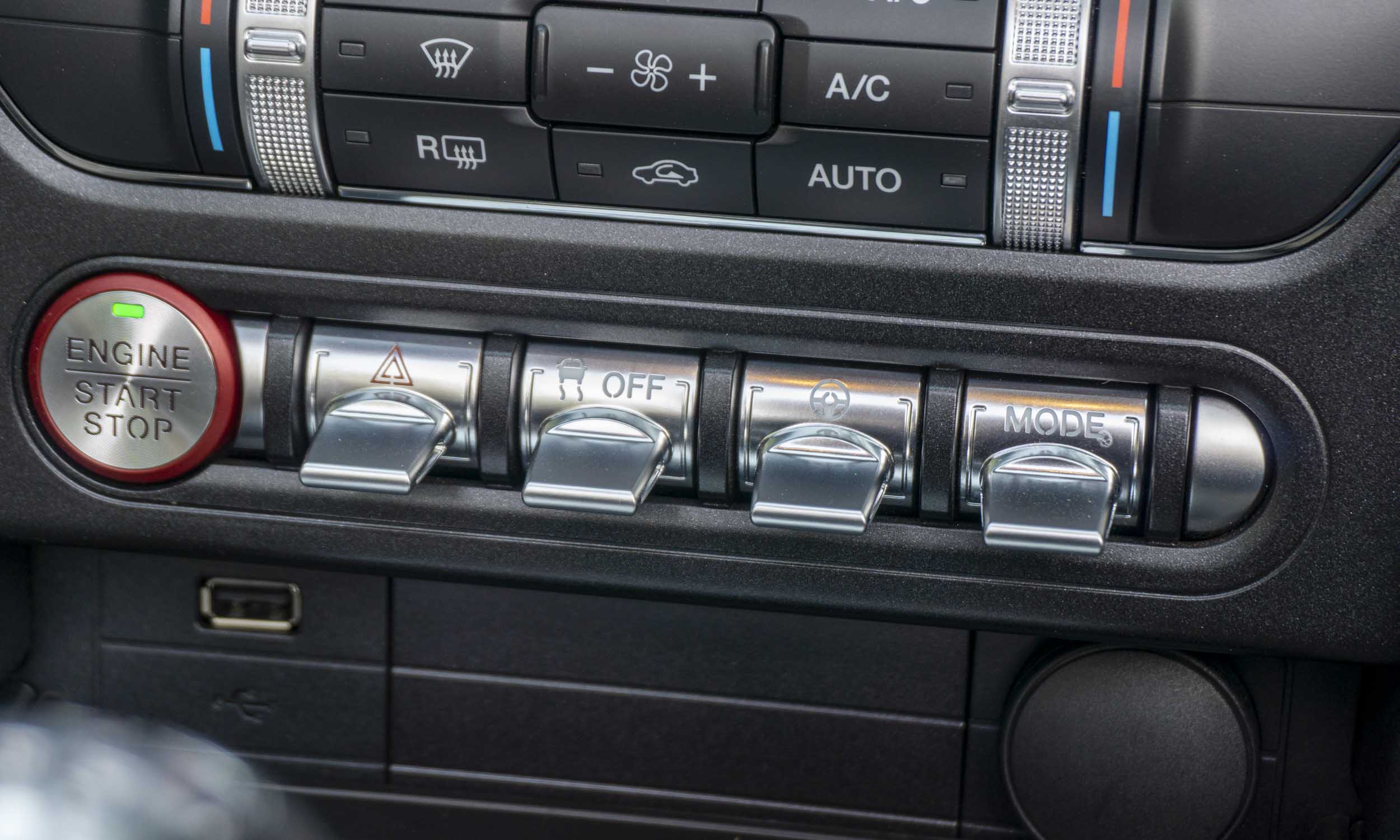 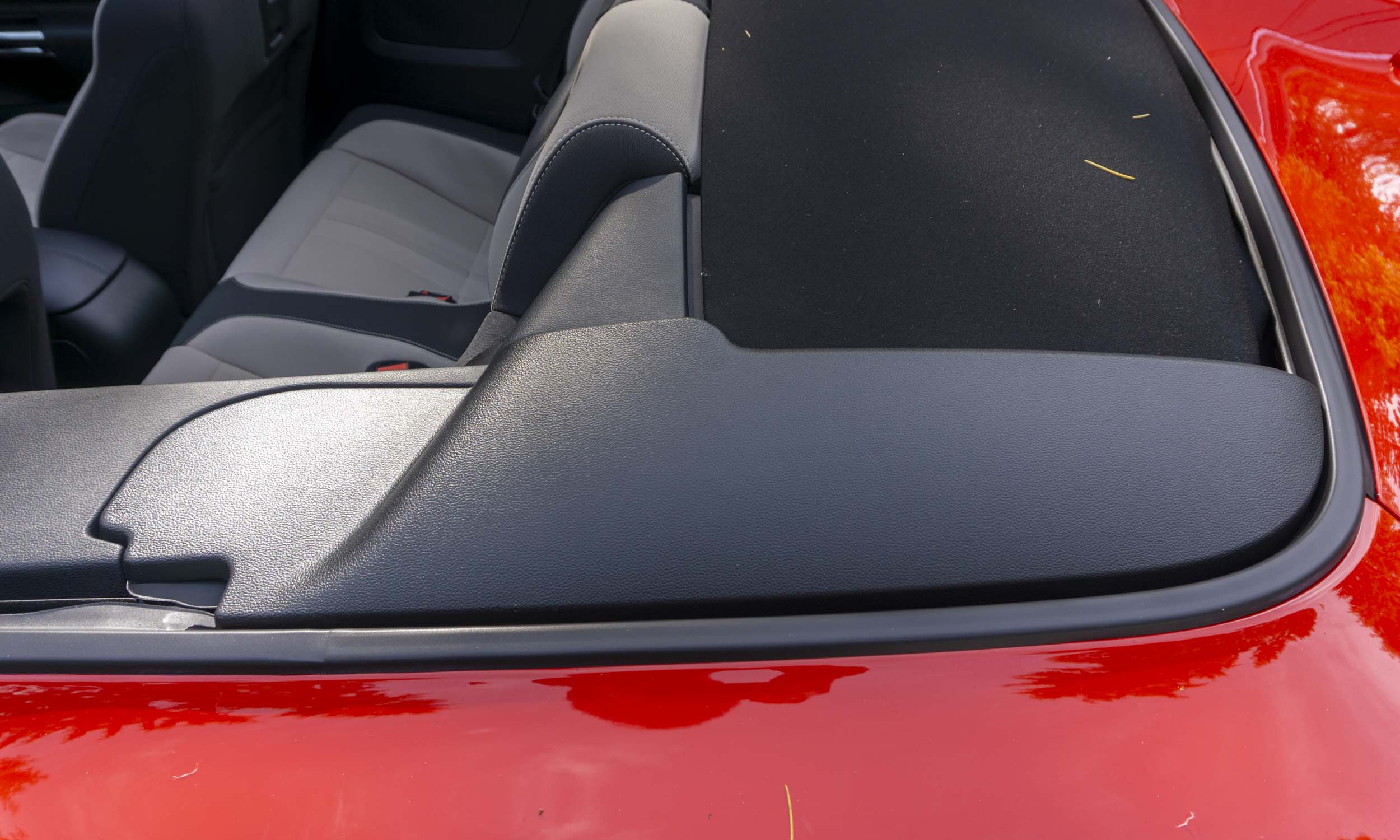 2020 Ford Mustang EcoBoost Convertible
Hard tonneau covers can be placed over the sides of the convertible top. 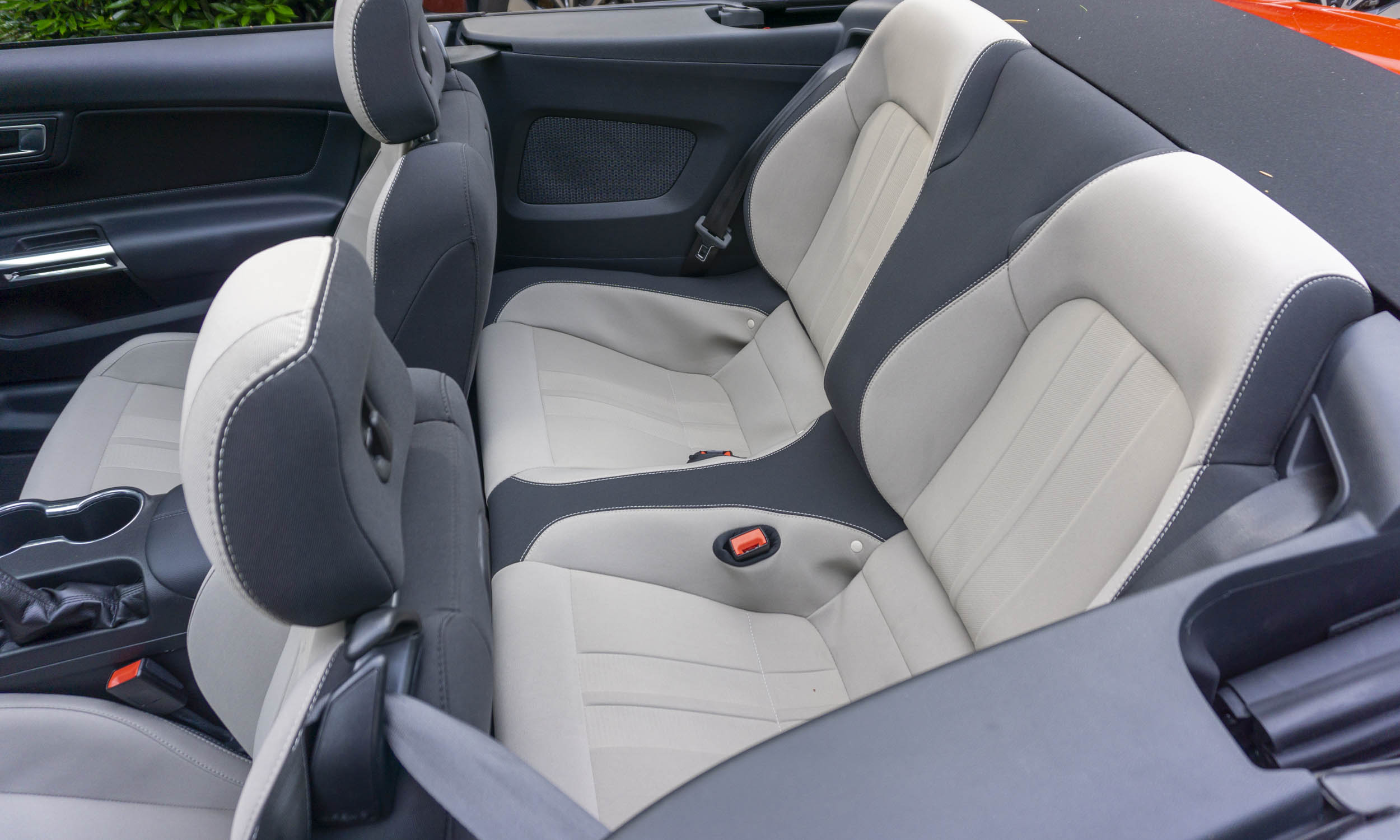 2020 Ford Mustang EcoBoost Convertible
Depending on where front occupants locate their seats, rear-seat legroom can be almost nonexistent. 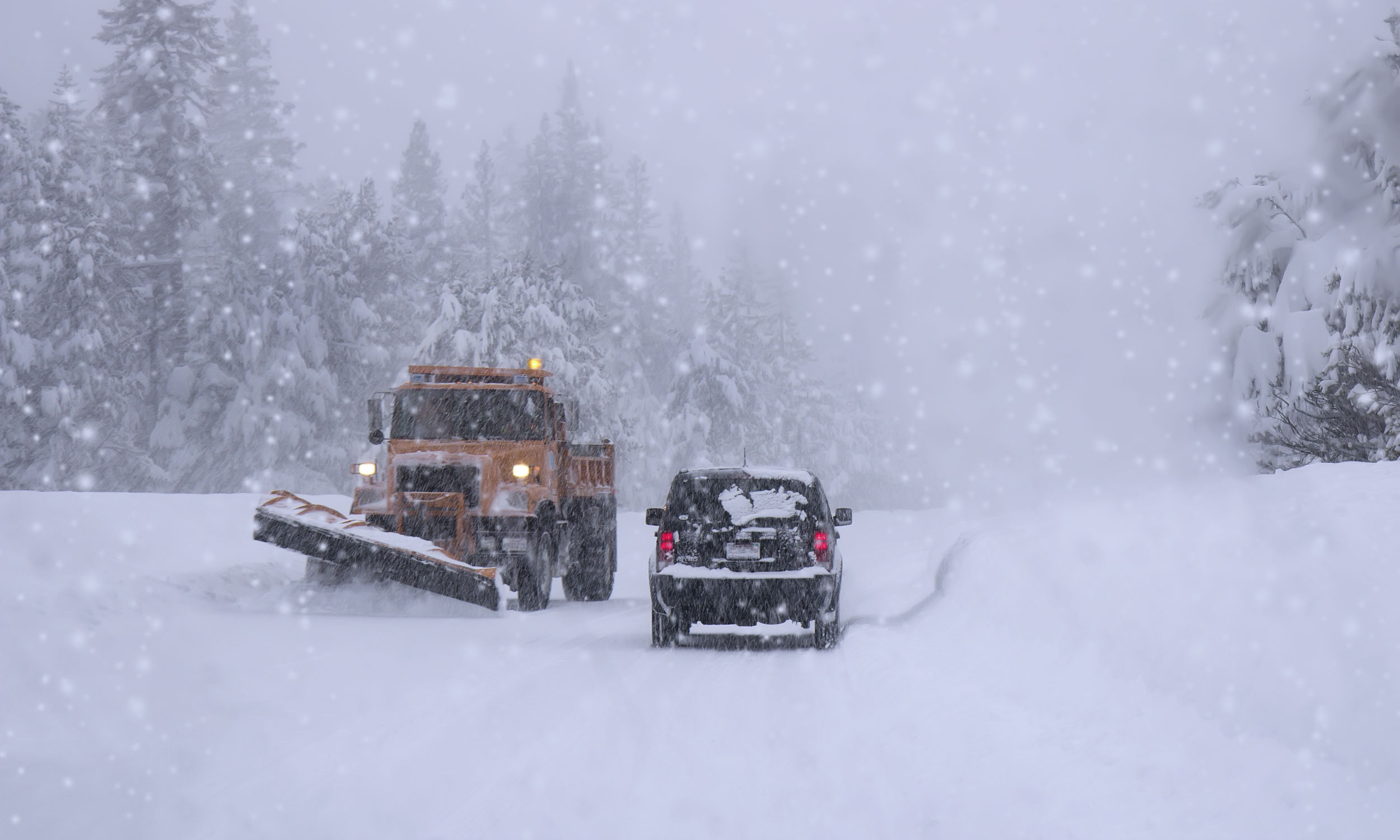 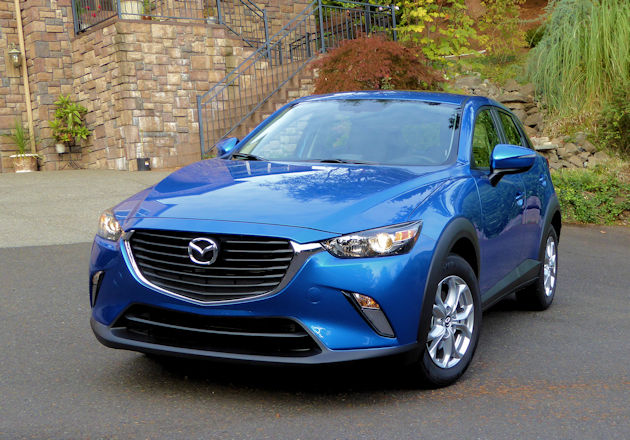