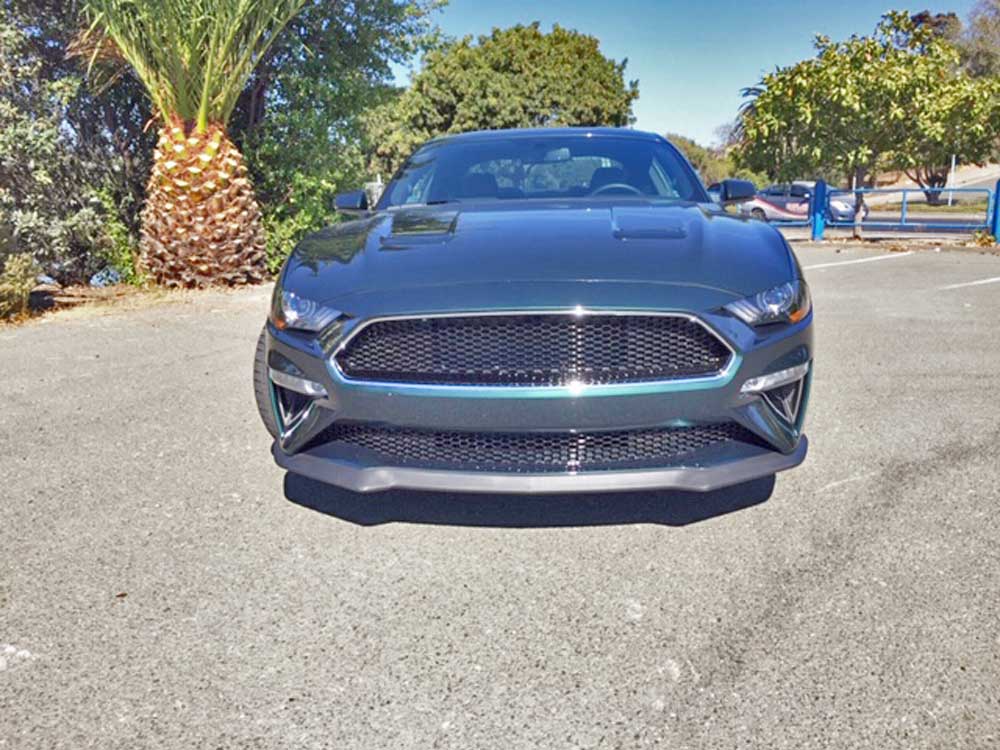 It was 1968 when the Movie “Bullitt” starring Steve McQueen as San Francisco Police Detective Lt. Bullitt, piloting a Dark Highland Green Ford Mustang Fastback appeared in one of the most famous movie car chase scenes in cinema history. Pony car fans may perceive the 1968 Mustang GT fastback that McQueen actually drove as the real star of the classic film for its prominent role in the stirring 12-minute high-speed chase scene that took place on the streets of San Francisco and the surrounding area. The risky segment was shot without the use of computer-generated special effects, depicting real hard-driving action by real people in real-time. Paying homage to the original Bullitt Mustang was the 50th Anniversary 2019 Ford Mustang Bullitt, which was a Limited Production Edition.

Warner Bros. originally purchased two 1968 Mustangs for the making of the film – one for $558. and the other for $559. After filming, the $559 car was purchased by a Warner Bros employee, who then sold it in 1970 to a New Jersey Police detective for $6,000. In 1974, the car again changed hands to the Kiernan brothers in 1974 for $6,000 who used it as their family car until 1980, and who turned down Steve McQueen’s offer to purchase it in 1977. Over the following years, the legendary movie machine acquired “Bullitt” vanity license plates and moved to Kentucky and then Tennessee. In 2001, one of the brothers (Robert) and his 20-year-old son Sean began restoring the Mustang. Sean Inherited the car from his late father Robert in 2014. The car’s rebuild was completed in 2016 and was started for the first time on July 4th of that year. The following year, the famous pony car was reunited with the McQueen family, when Steve’s granddaughter Molly met with Sean in the Ford design studio in Dearborn MI.

The press launch of the 2019 Ford Mustang Bullitt took place in Sausalito, CA, driving over the familiar streets of San Francisco and the surrounding area where the movie was actually filmed. Ford produced earlier Bullitt-badged tribute models before– in 2001 and 2008. Both previous Bullitt editions appeared in the familiar dark green or black paint and were powered by a somewhat hotter engine than the Mustang GTs of the same year. 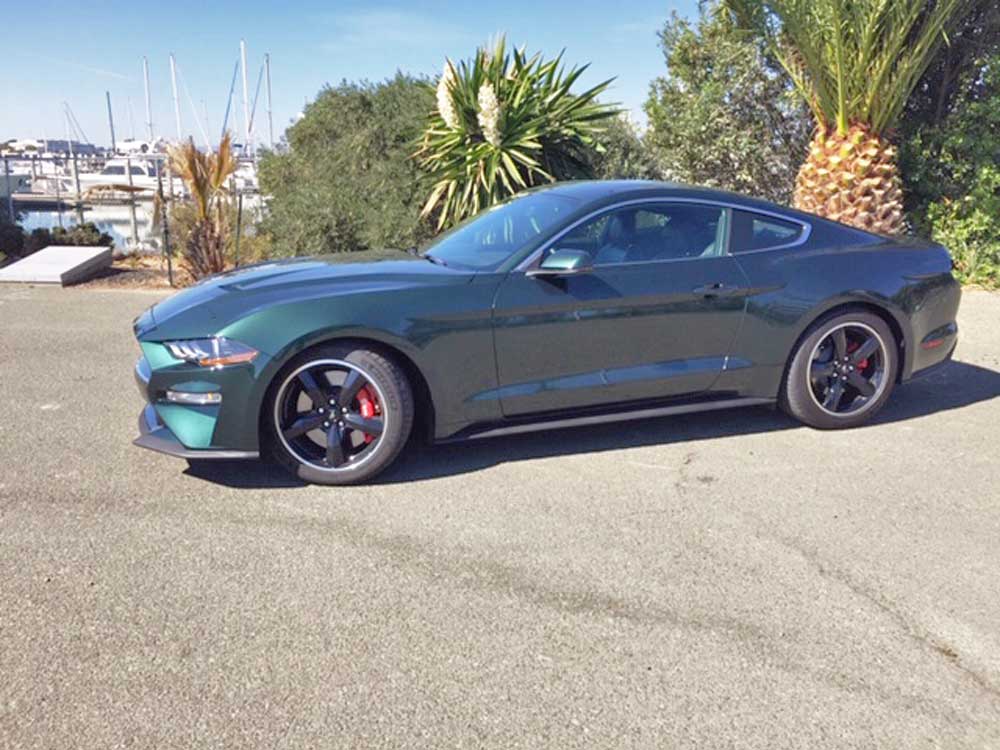 The latest iteration 2020 Bullitt Mustang serves up all the basic revered “bad-ass” features in addition to some unique touches not to be found on other Mustang models. It doesn’t rate as the hottest Mustang available in the lineup, which is topped by the GT350 and the Shelby GT500. The Bullitt does however deliver a highly respectable hot street performance. 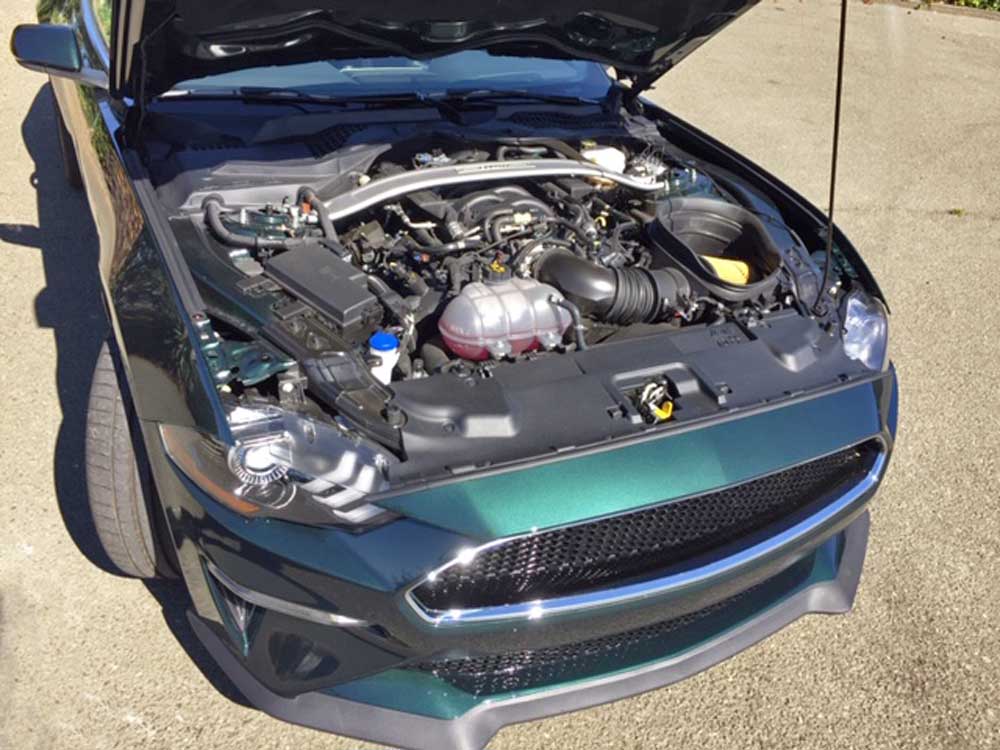 Motive force is provided by a longitudinally-mounted front 5.0-liter (307 cu-in), TI-VCT V8 engine with dual fuel, high-pressure direct injection and low-pressure port fuel injection, that cranks out 480 horses at 7,000 rpm while developing 420 pound feet of torque at 4,600 rpm. There’s an open Air induction System and Shelby GT350 intake manifold with an 87-millimeter throttle body and performance powertrain control module calibration. The engine’s motive force is geared to the rear wheels with a 3.73 rear end Torsen limited-slip differential via a smooth shifting and updated six-speed manual gearbox with downshift rev-matching and an iconic white cue-ball shift knob replicating the original. There’s 0-60 mph time wasn’t officially tested, but one should be able to clock out at 4.1 seconds depending on your clutch and shifting skills. The Bullet’s top speed is rated at 163 mph. EPA fuel economy is -rated at 14 mpg city and 23 mpg highway. 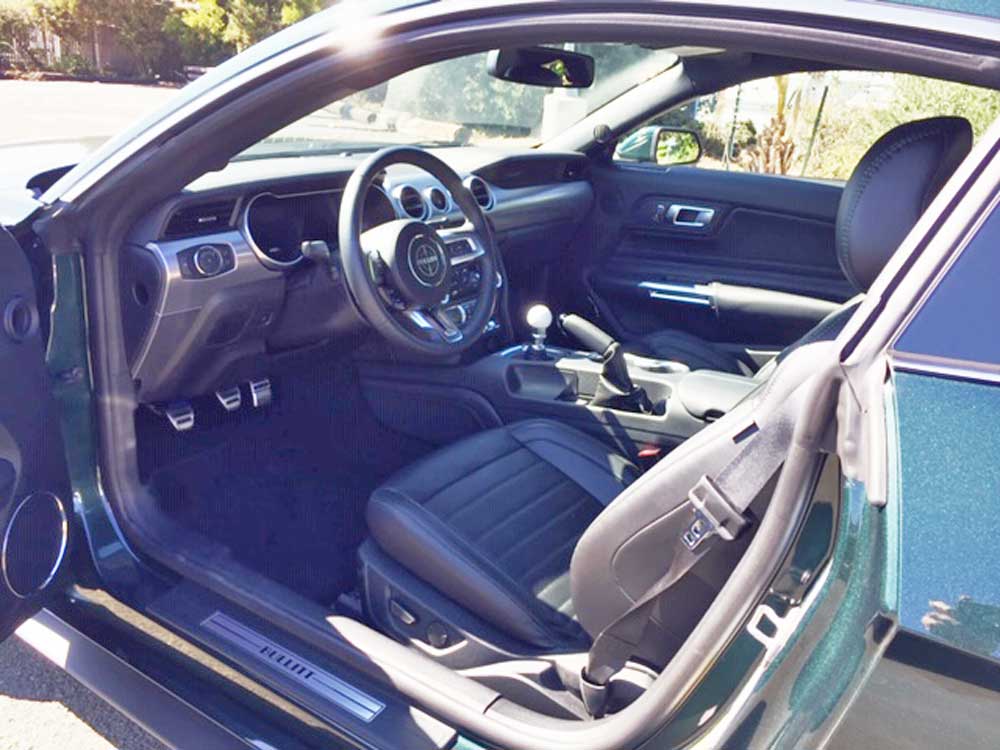 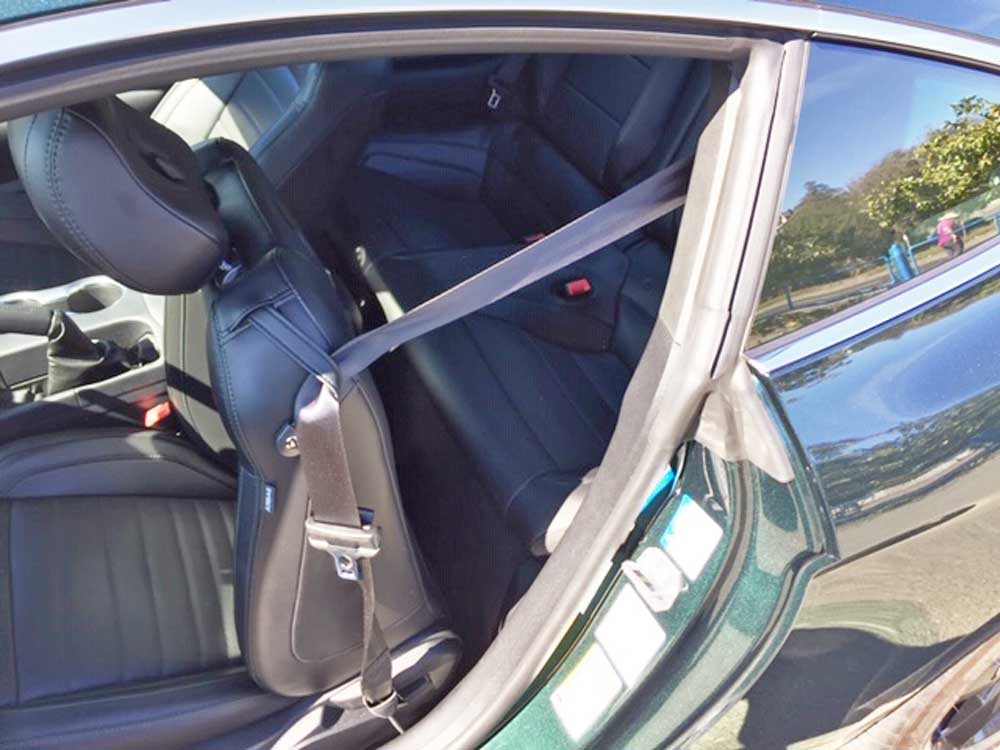 The Bullitt continues to be rated as a four passenger coupe, but you’ll need to be on the diminutive side to enjoy riding in the back seat. The rating helps to reduce insurance rates. 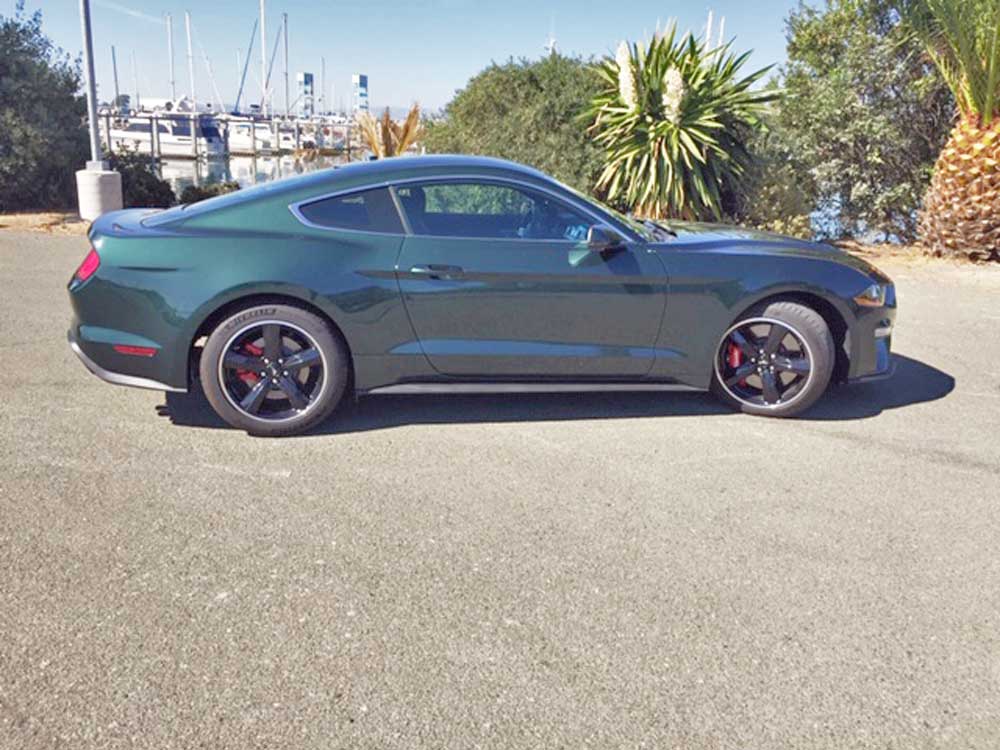 The 2020 version of the Ford Mustang Bullitt is a lot sexier than the original with a bold and aerodynamic athletic body profile with the GT Performance Package aero splitter and features a custom black honeycomb front grille with a bright surround trim over the large lower air intake and wide front diffuser. The simple Bullitt design theme features a circular faux gas cap with the Bullitt logo and a subtle chrome accent around the side windows. 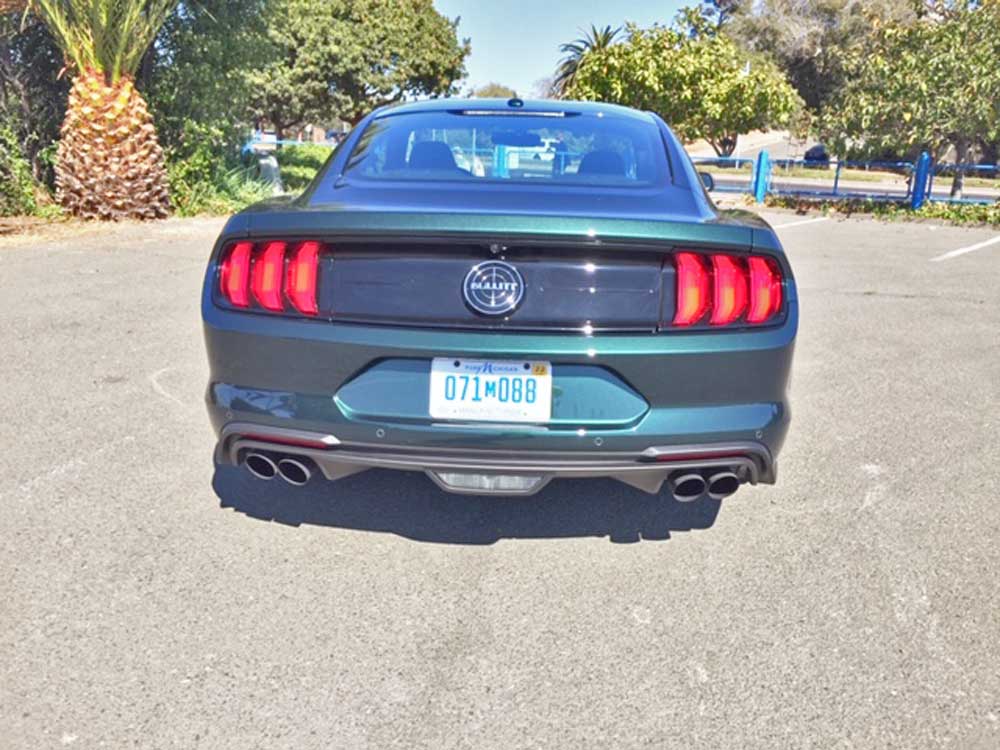 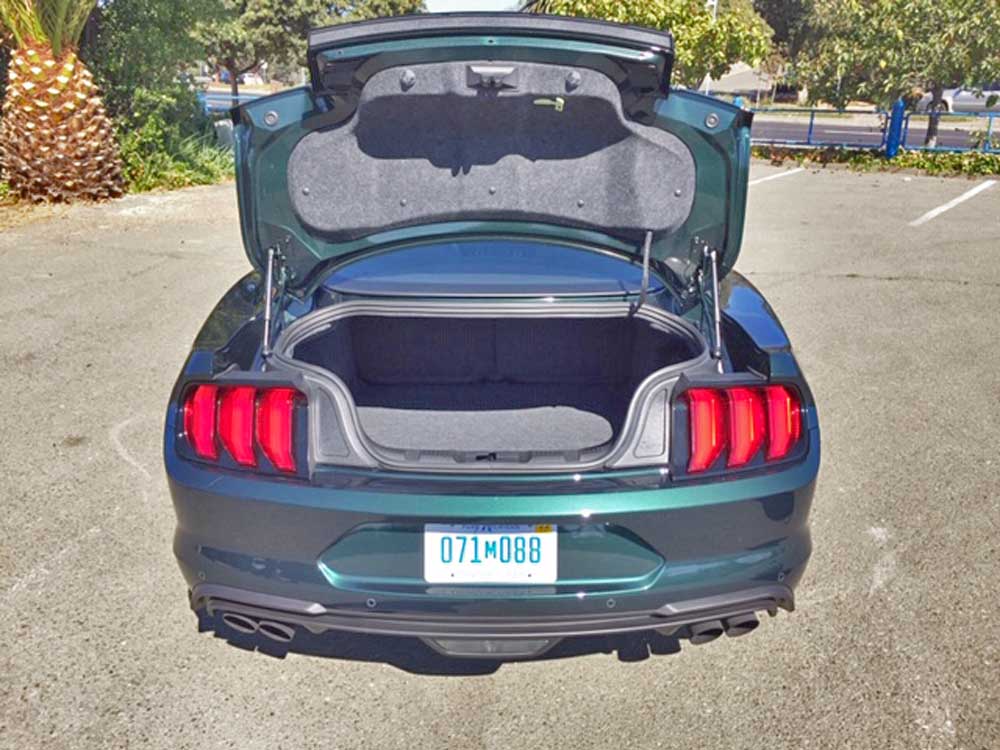 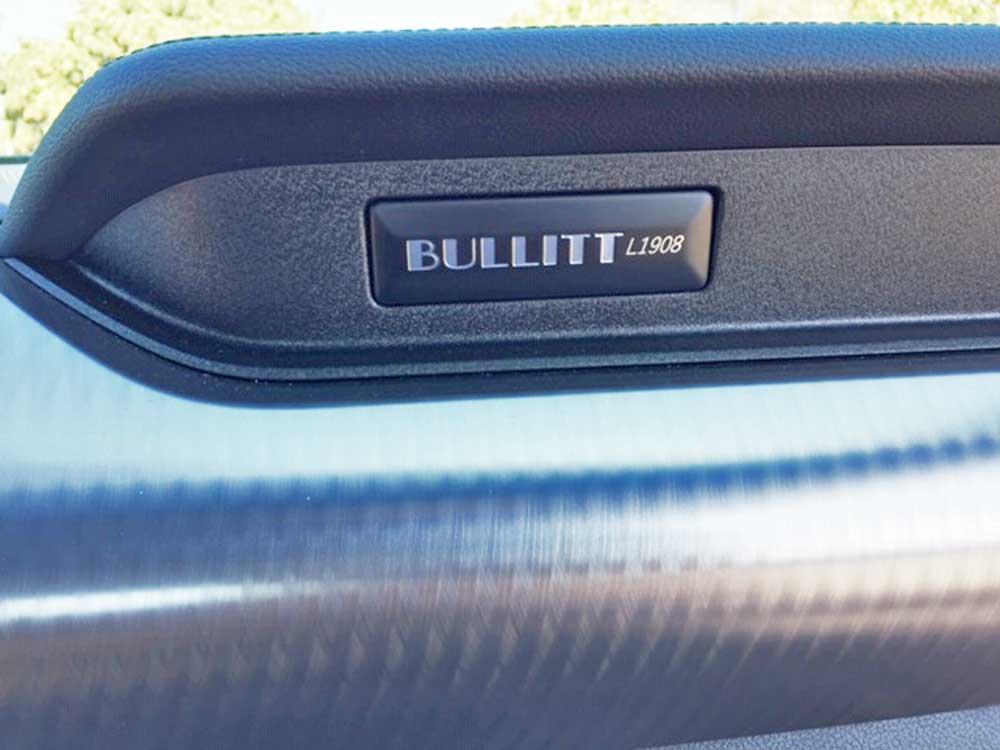 The Bullitt’S  fully configurable 12-inch digital instrument cluster is capable of changing its graphic design when cycling through the selectable driving modes, Turn-by-turn Navigation instructions, infotainment readouts and more. There’s also a G-force indicator along with displays for air intake temp, air to fuel ratio and other relative info. An additional pair of dash-mounted gauges provide oil pressure and intake manifold vacuum for what ever it’s worth.

There are but three options available: –Recaro leather-trimmed sport seats with green accent stitching that appears on the dash, door panels and center console as well for $1,595. ; the MagneRide Damping System priced at- $1,695. ; and the Bullitt Electronics Package for $2,100. that comes with touchscreen Navigation, a CD player and HD radio, BLIS with Cross-Traffic Alert and a Bang and Olufson PLAY premium 100 watt stereo system via Ford’s Sync® 3 system. Colors are the traditional Dark Highland Green or Shadow Black.

Pricing for the Mustang Bullitt starts at $46,705, and you can spend up to $52,595 if you choose all options. My test Bullitt Mustang was sprayed Dark Highland Green metallic and featured all the options except the Recaro Sport Seat Package. The standard seats are exceptionally supportive and comfortable with 8-way power adjustment including a power lumbar support. They also provide heating and ventilation.

Whether or not you’re an admirer of Steve McQueen or an avid fan of the “Bullitt” movie, the 2020 Ford Mustang Bullitt is a sheer joy to drive. It’s particularly suited for tight, twisting roads with severe elevation changes, always displaying an incredible stability. The handling characteristics are stellar, with excellent steering input and feel with a nice fat steering wheel. The active exhaust system is programmable to achieve just the right note to please one’s audible sense, but not always that of the neighbors. It definitely produces broad grins, especially motating through a tunnel. 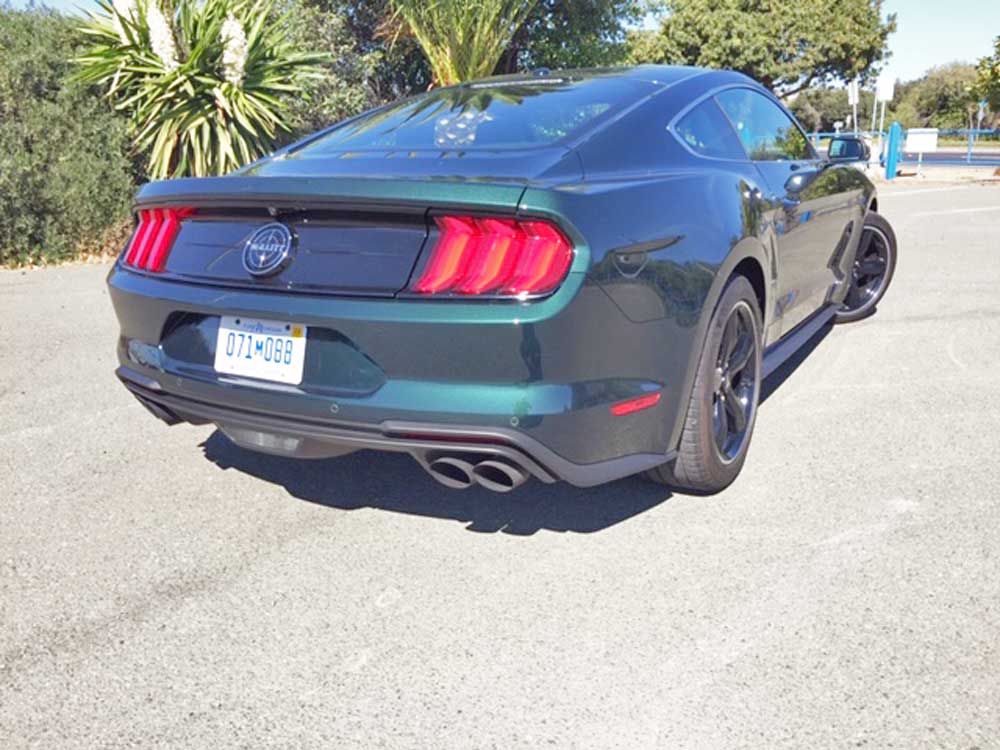 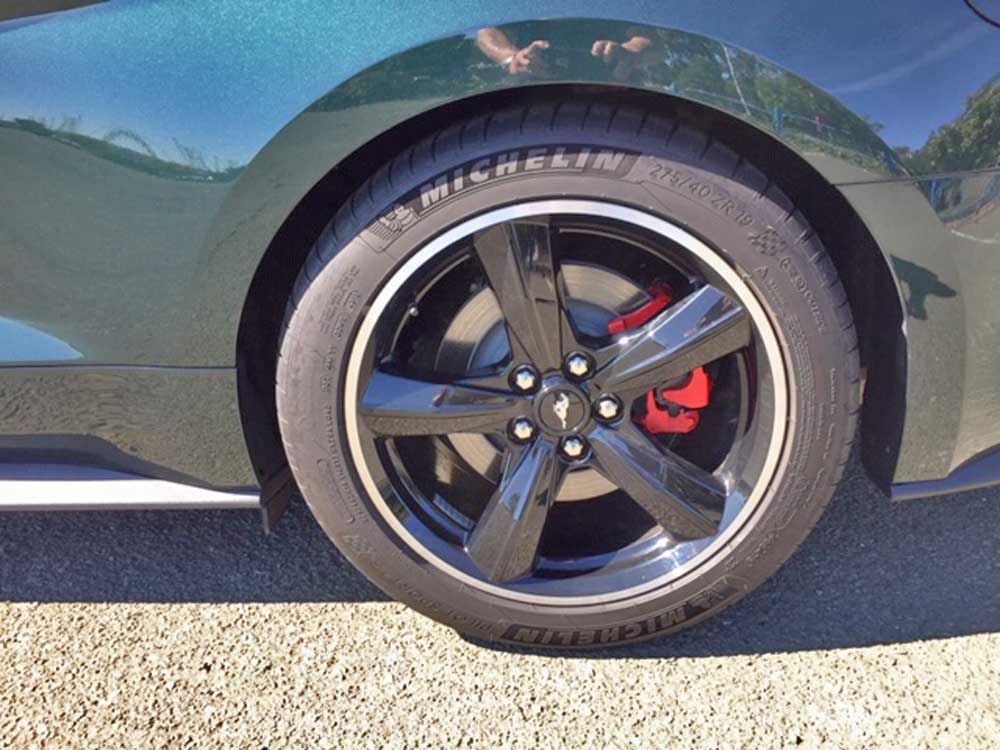 All of the standard fare active and passive safety features available on the regular Mustang lineup appear on the Bullitt.

Ford’s standard warranty for the Bullitt is three years/36,000 miles covering basically everything, with a five-year/60,000 miles on the drivetrain.

In the bottom line analysis, the 2019 Ford Mustang Bullitt is not configured to be a top track performer, but rather a hot street rod. Just like Steve McQueen, the Mustang Bullitt is “The King of Cool” in the current Mustang stable. 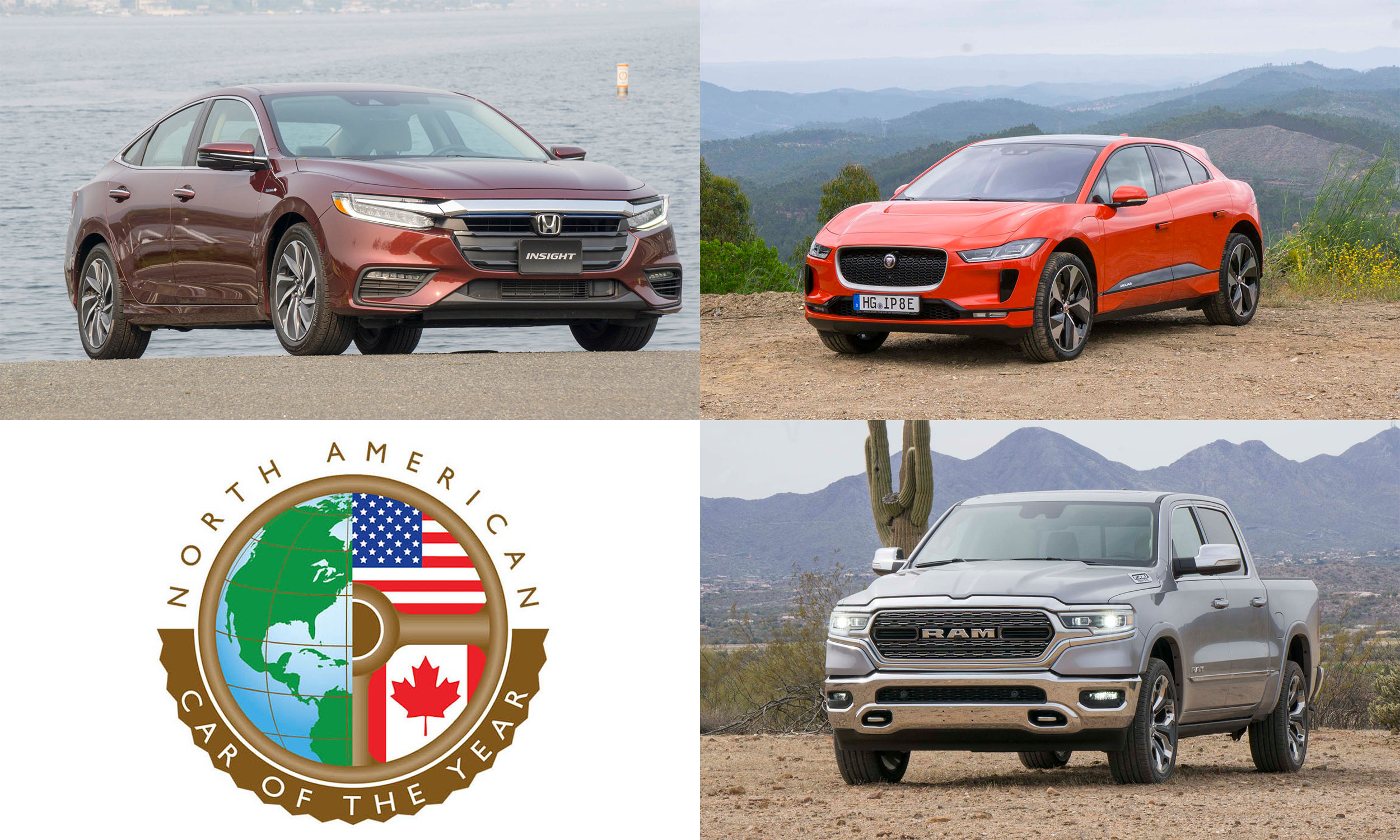