2020 Chevrolet Corvette Stingray Convertible
“Wow, I could have had a C8” 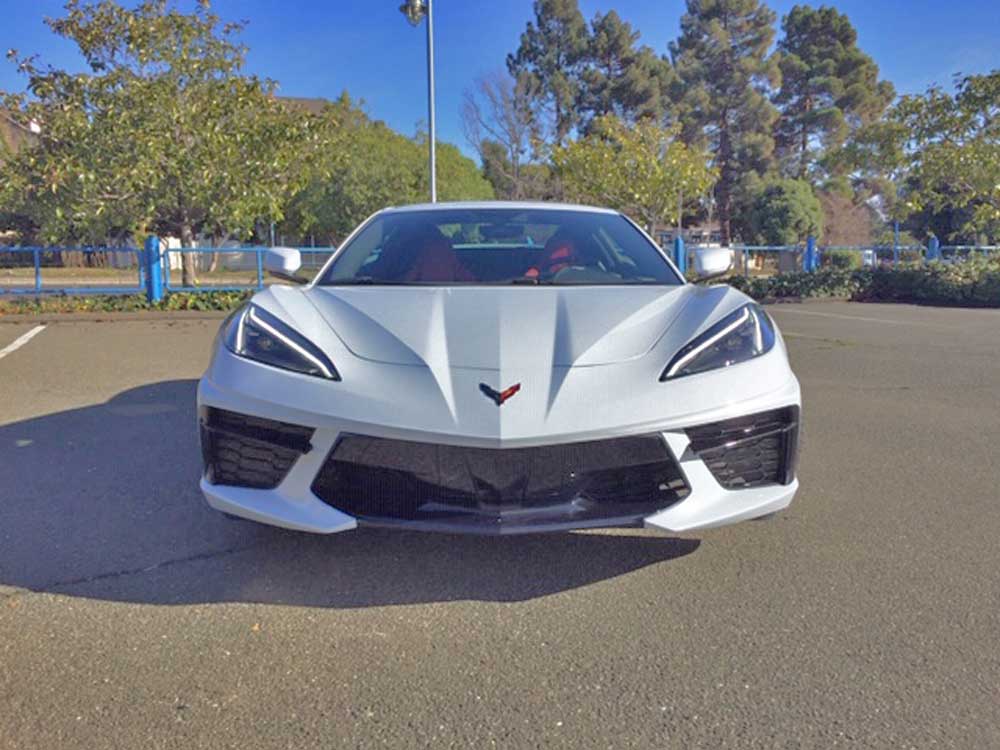 The above quotation is a takeoff on a popular vegetable juice drink, but is also something that one might hear a Ferrari owner mutter when realizing that he or she could have had an American supercar with all the performance of the Italian brand at a considerably lower cost. 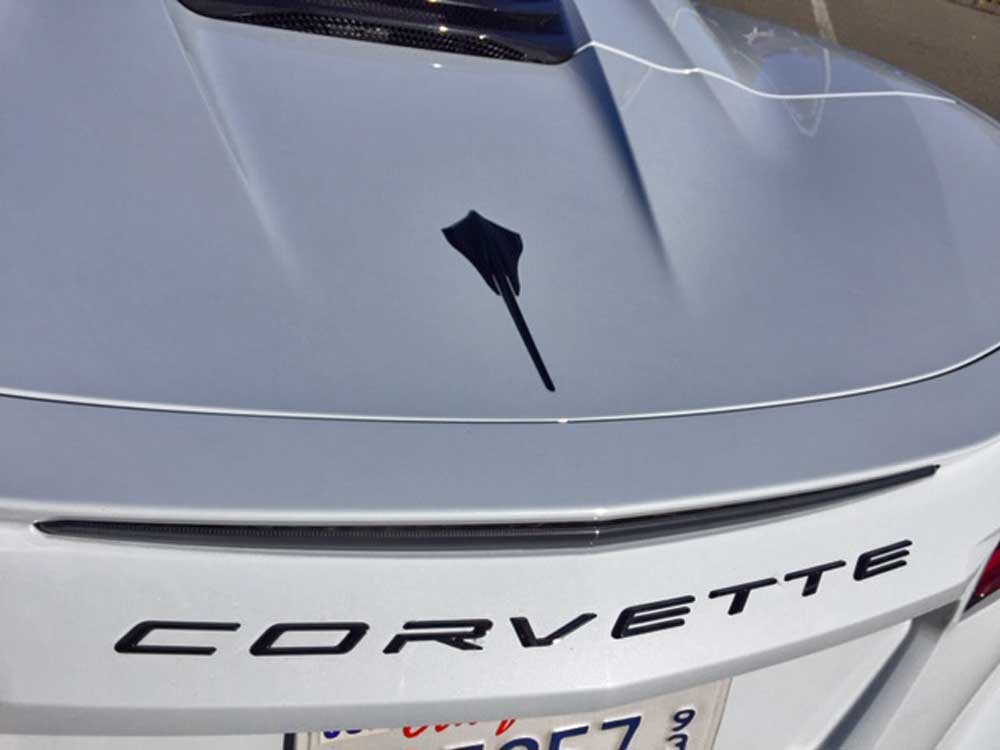 The Corvette is now available as either a coupe or a convertible with a folding or retractable hard top. Since the coupe’s roof lifts off for open-air motoring anyway, it represents a more frugal choice. It’s probably wiser to instead spend the money upgrading to the 2LT version, which starts at $68,295, and adds a substantial number of features, including a head-up display, a wireless smartphone charging pad, heated and ventilated seats, a heated steering wheel, a 14-speaker Bose stereo system, blind-spot monitoring, and a bunch more. The Z51 performance package is also a highly desirable checklist item since it includes all of the Corvette’s best performance-oriented gear. 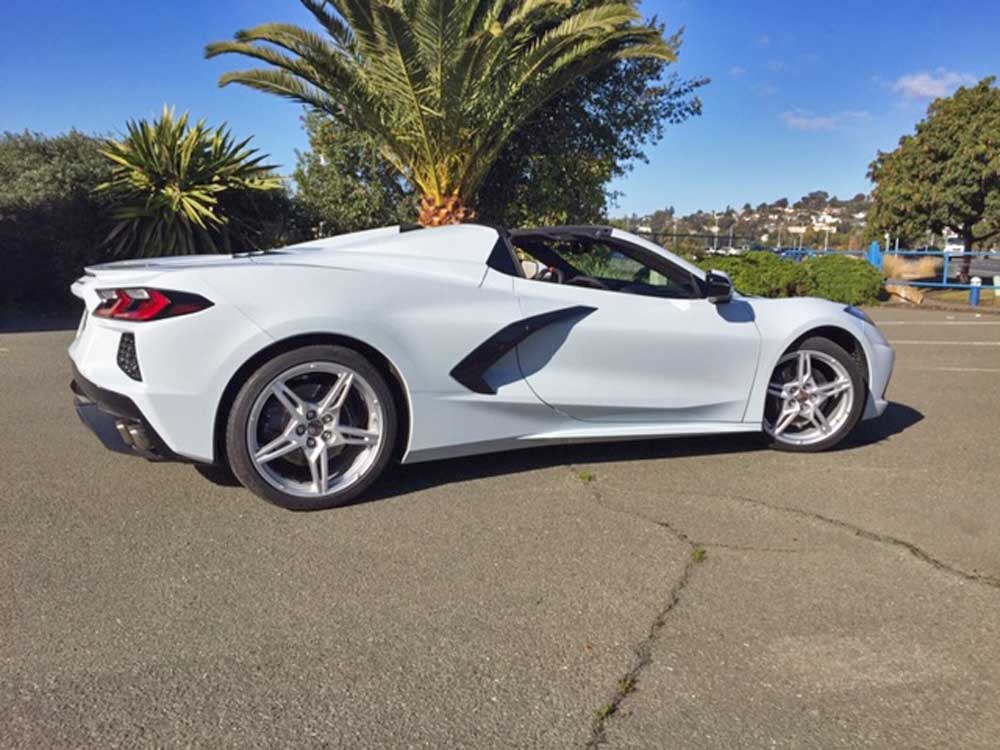 The all-new Corvette Stingray Convertible is visually provocative and stimulating. Styling that is not only elegant, but functional as well. The design goal was to make a bold statement, embracing the car’s advanced technology, while enhancing its overall performance from the wind tunnel to the track. It breaks new ground, while remaining true to elements that define a Corvette as a Corvette. No single detail was repeated from previous generations, and the new Corvette Stingray includes the distinctive profile defined by a long dash-to-axle ratio – a low, lean proportion.

The greenhouse suggests the canopy of a fighter jet. Designers built on this foundation, a form vocabulary from two dissimilar sources: aerospace and nature. 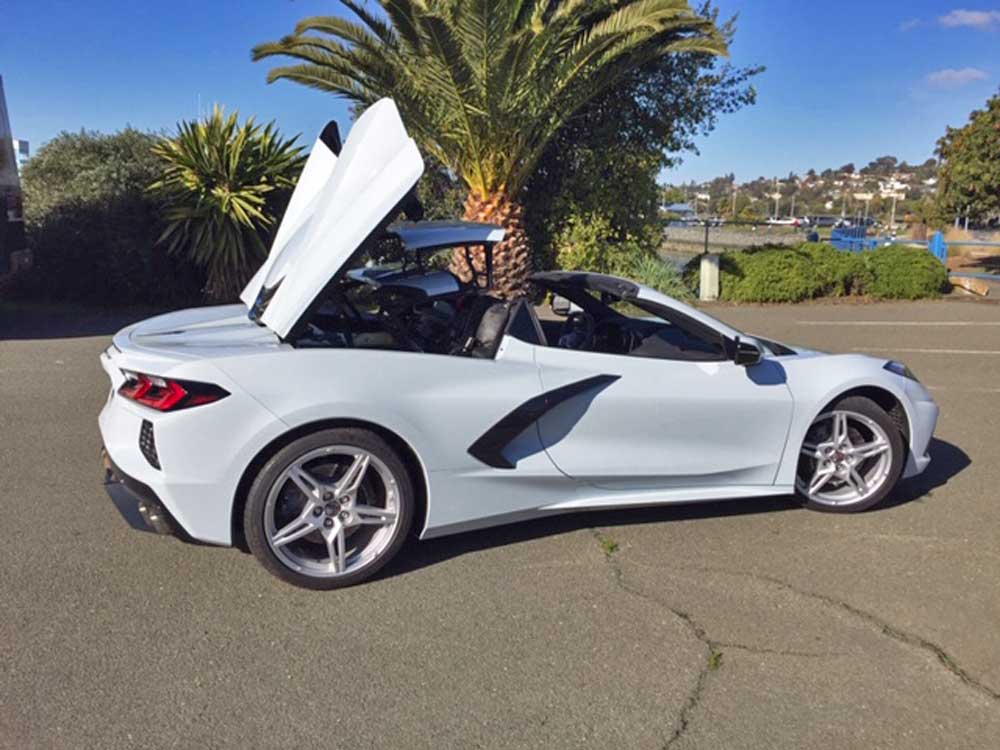 Photographs do not do the Stingray justice – it is not only a purposeful and functional design, it is also stunningly gorgeous. Yes, there are some Corvette purists who feel that the new design, which is similar to that of a Mclaren violates the heritage and purity of the iconic sports car, but I hereby disagree vehemently. Everything about this C8 Corvette represents a step up. I have my past favorites too, such as that first 1953 example; the 1957 four-speed, fuel injected model. Another early favorite is the 1962 Corvette, but it’s clearly time to move on

The major decisions to be made include engine size and roof configuration. Something to keep in mind regarding the latter is the fact that the engine is visible with the coupe version, but alas, not with the retractable roof model. 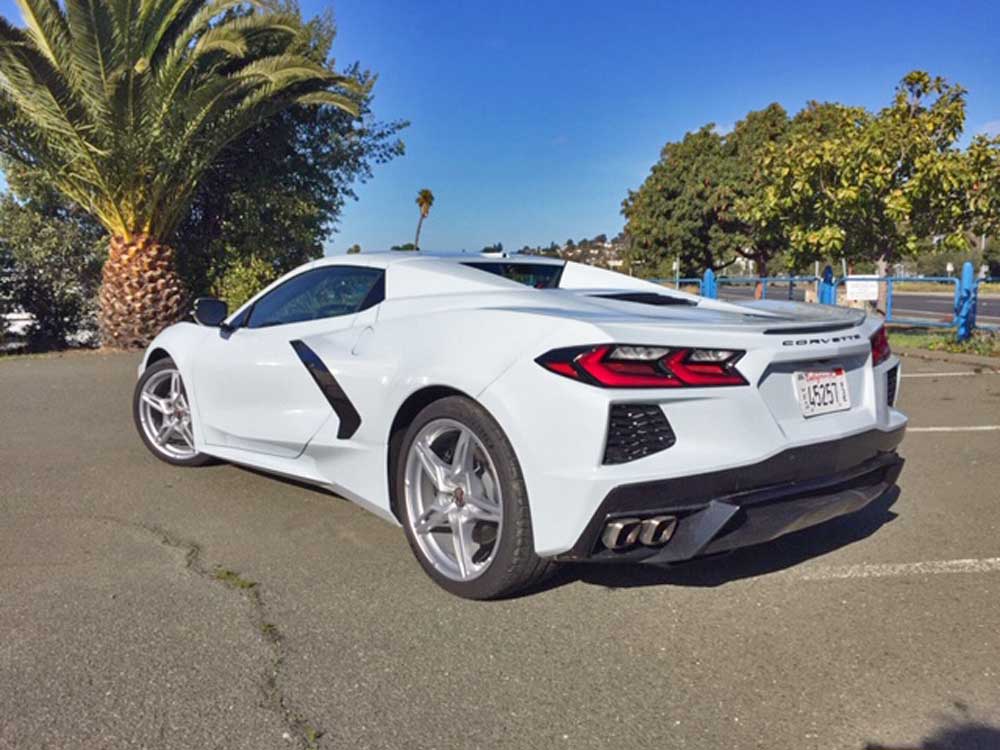 Perhaps the most notable feature is the positioning of the engine itself. It is now mounted behind the passenger compartment or amidship rather than up front. This makes for improved weight distribution. 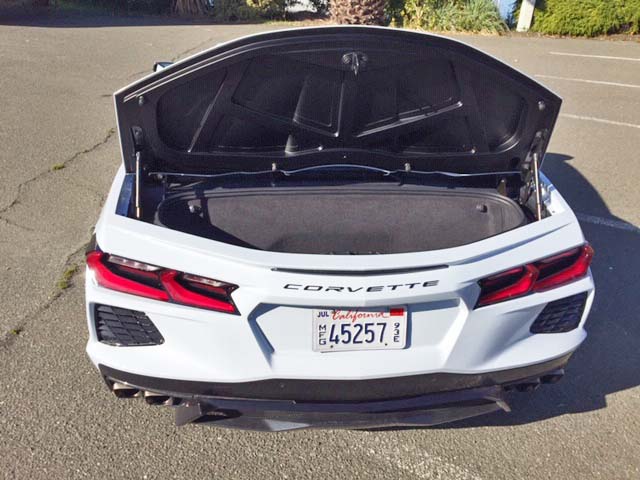 The engine is still a 6.2-liter V-8 that cranks out 490 horses along with 470 pound feet of torque. When equipped with the dual-mode exhaust system included as part pf the Z51 performance package, five more horsepower is gained – not a lot mind you, but the Z51 selection also adds an electronic limited-slip differential, more powerful brakes and summer tires. There is no manual transmission available, but rather an eight-speed dual clutch automatic – a first for Corvette, which is controlled by either a push-button gear selector on the center console or by using two large steering-wheel-mounted shift paddles.

The 0-60 mph time clicks off in a mere 2.8 seconds, while the quarter mile is covered in 11.2 seconds at 122 mph with the Z51 package and optional FE4 magnetorheological dampers.
Even with the base version, this new ‘Vette is capable of phenomenal handling characteristics and euphoric sensations on the road or on the track, all while garnering EPA fuel economy ratings of 15 mpg city, 27 mpg highway, and 19 mpg combined. 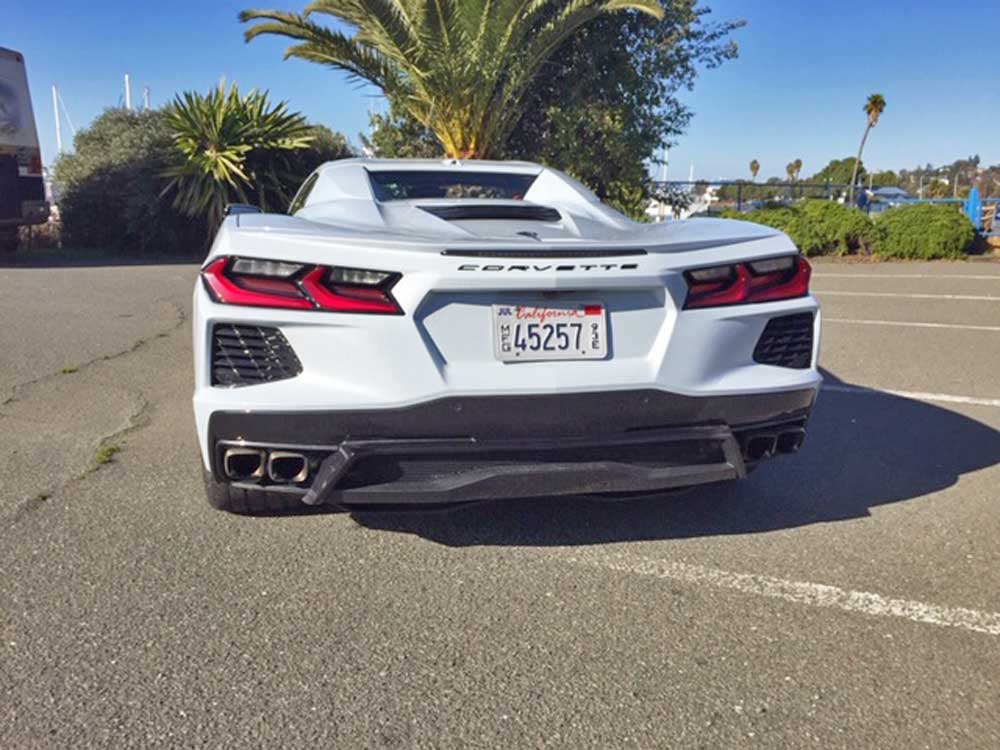 My test C8 Stingray Convertible was a base model priced at $66,400., which with the optional retractable hardtop and destination charge came to $67,495. The exterior wore a Ceramic Matrix Gray coat with the interior executed in Adrenaline Red. It rolled on Michelin Pilot SportZP staggered rubber – 19 inches up front and 20 inches aft, mounted on 5-“split-spoke polished alloy wheels. 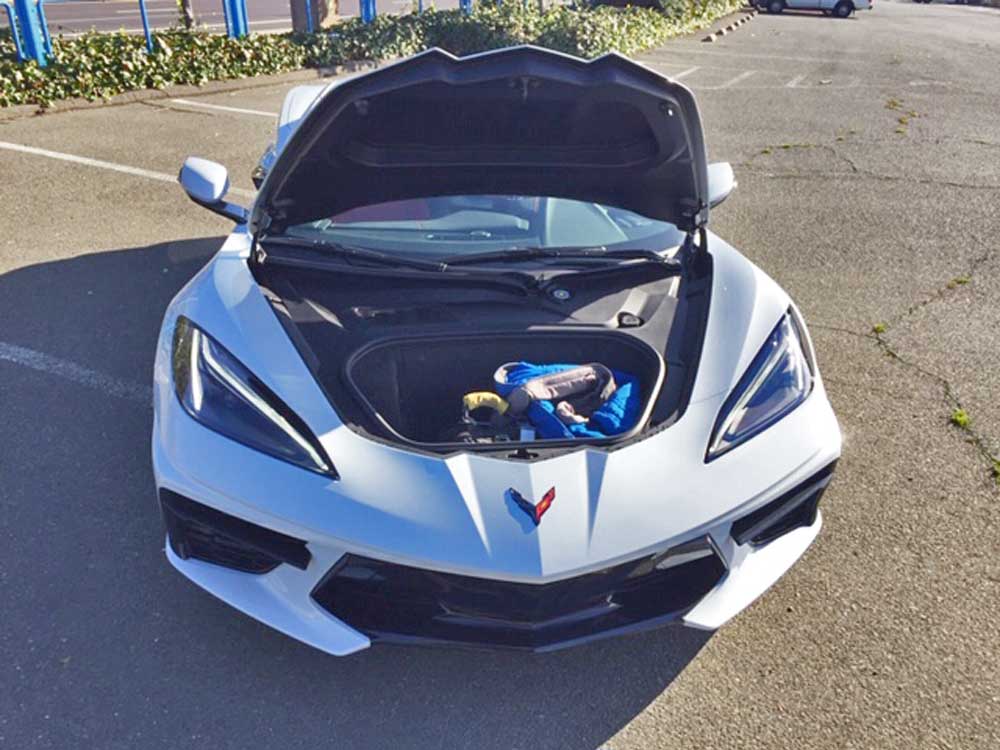 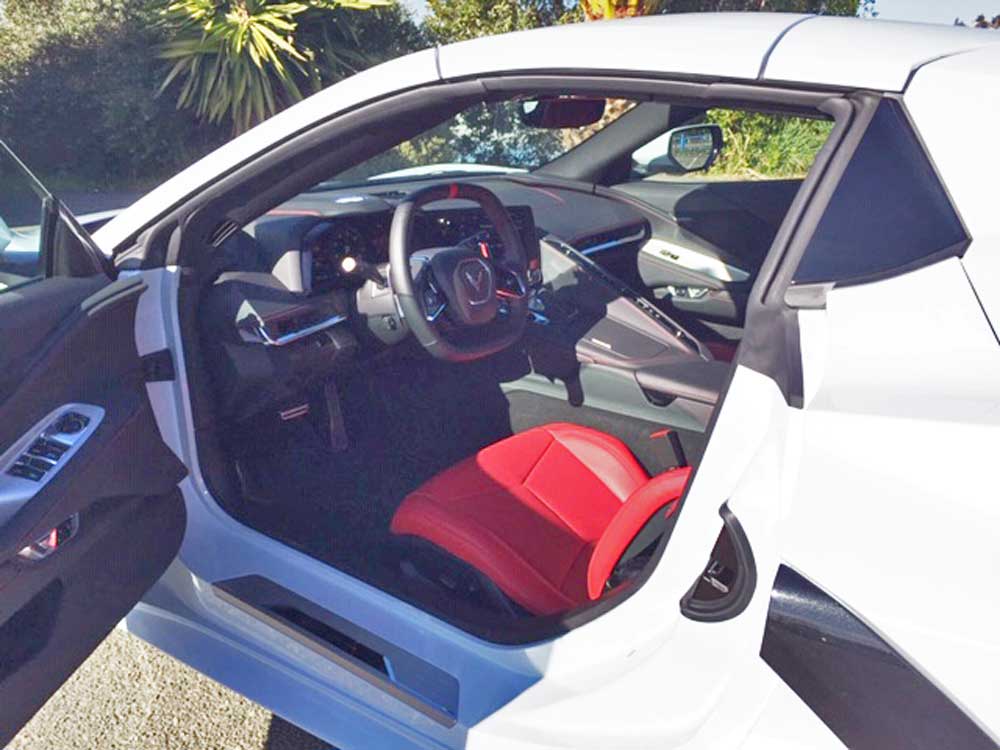 The C8 Corvette’s interior continues to serve up a two-seat layout, but the cockpit moves closer to the car’s nose to allow for the mid-mounted engine. The interior comes lined in leather, real metal, and faux suede and even features a stitched headliner. The removable roof fits inside the car’s trunk aft of the engine compartment. The rear trunk is able to fit two golf bags, and the “frunk” (front trunk) provides space for luggage or cargo while the roof is stowed. 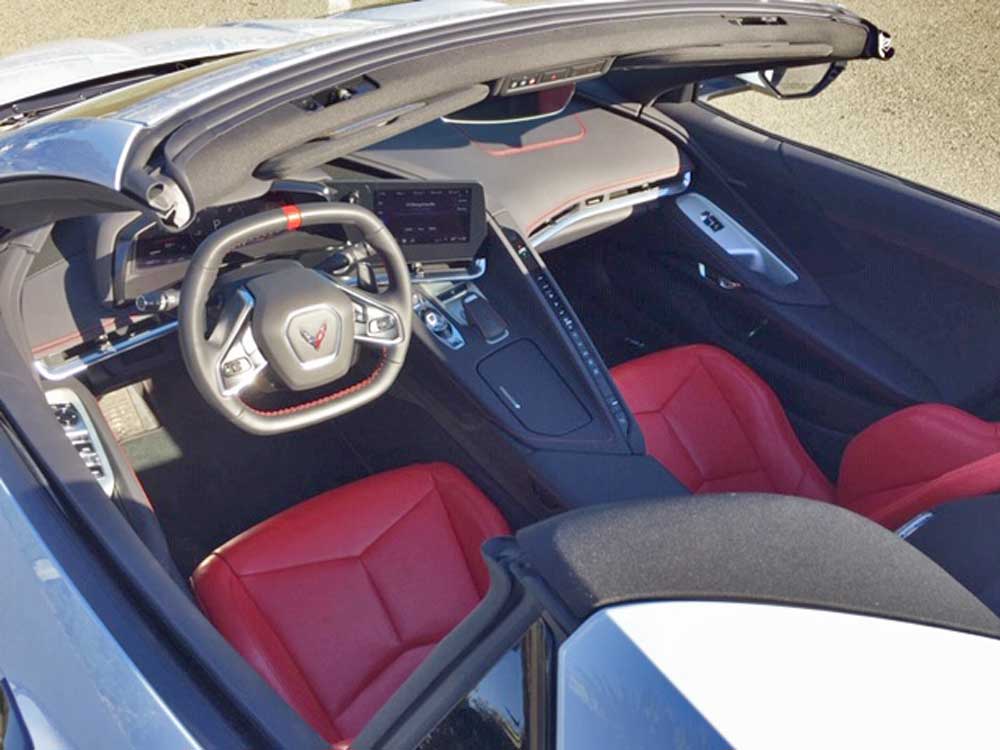 The driver position is behind a squared-off steering wheel and a 12.0-inch reconfigurable gauge display, with a large infotainment touchscreen angled toward the driver for easy access. The interior design bisects the driver-focused cockpit with a vertical bank of switches for the car’s climate-control system. The C8’s base cabin is well thought out, but moving up to the 3LT package gains upgraded materials such as sewn leather on most interior surfaces, along with carbon-fiber trim. 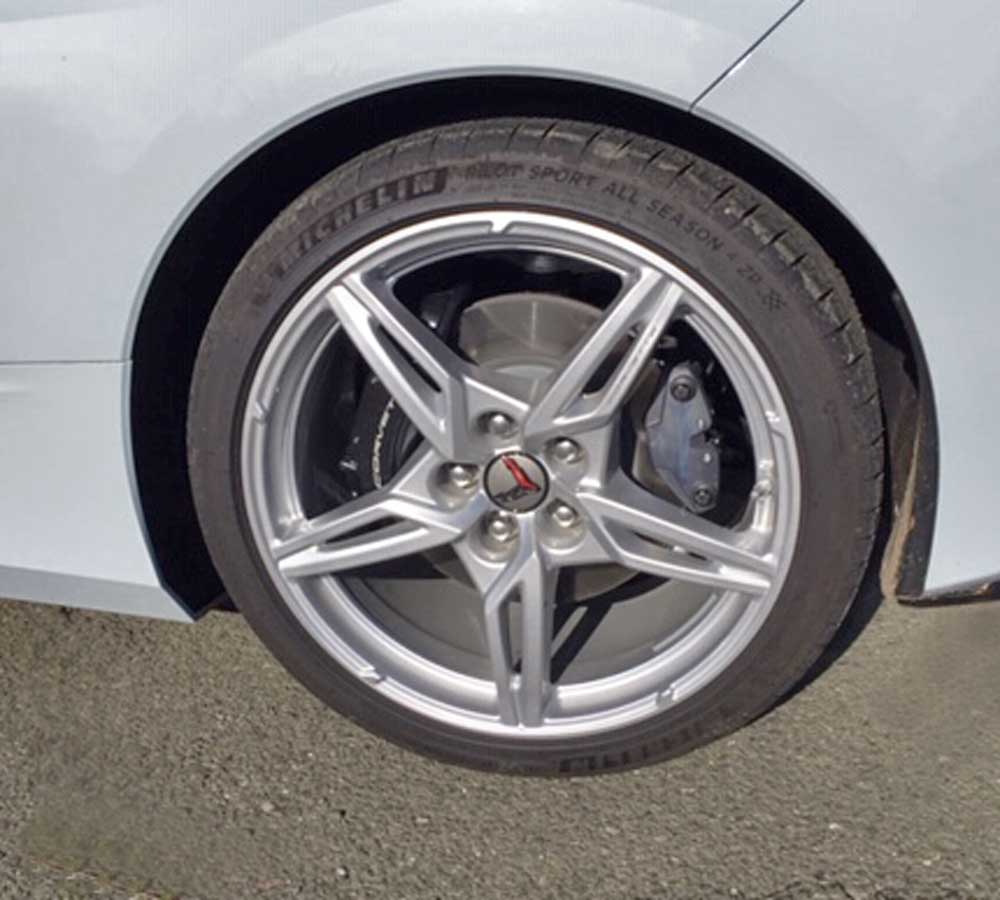 The Corvette is available with a limited number of driver-assistance features, none of which come standard on the base model. Key safety features include: available blind-spot monitoring and rear cross-traffic alert.

The new Stingray is, in a word, incredible. Other words would be phenomenal and awesome. It behaves in a docile and civilized manner when called upon to do so, but it is also a screamer when poked and prodded. It handles with both an admirable athleticism and preciseness, riding comfortably, when simply cruising, or it may be firmed up for track exercises and more aggressive driving whenever the mood strikes.

At the heart of the Corvette Stingray’s driver-focused technologies is a cockpit-mounted Driver Mode Selector, that allows drivers to optimize the car to suit their driving preference and road conditions through a choice of five settings: Weather, Eco, Tour, Sport and Track, which ultimately tailors 12 vehicle attributes. The Driver Mode Selector is an easy to use rotary knob near the shifter. The Tour mode is the default setting for everyday driving. There’s also a steering wheel mounted “Z” mode that’s almost like injecting nitrous oxide.

Bottom line, the 2020 Chevrolet Corvette Stingray Convertible is capable of delivering a completely satisfying and heightened level of performance on par with that of a Ferrari at less than half the price. It’s clearly the most potent and best-looking Corvette available off the showroom floor. Is it worth the price? Depends entirely upon your perspective and your bank account. If you can afford it, go for the gusto, otherwise, settling for a base Corvette Stingray convertible would certainly not be a disappointing option.