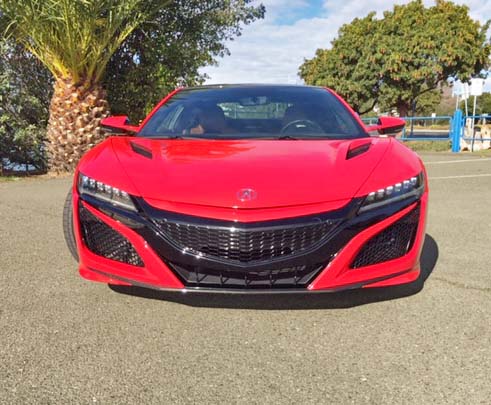 Acura’s New Sports eXperience (NSX) first appeared on the automotive scene in 1989 as a 1990 model, and that first model is clearly as popular today, perhaps even more so than when it was first introduced, It still maintains a substantial fan base. 1997 bowed with a performance enhancement featuring a new larger engine. The second upgrade followed in 2002, which consisted primarily of a facelift. 2005 marked the end of production and the cult-like following vociferously mourned the disappearance of the original iconic sports car from Honda’s luxury division, constantly clamoring for a worthy replacement. The long wait finally ended in the Spring of 2017 with the return of the highly anticipated and dramatically improved two-seat Japanese sports car.

What was destined to become the 2017 Acura NSX, made its debut strictly as an exercise in design, in the form of a concept vehicle at the 2012 Detroit International Auto Show, and it had yet to be given official approval for production. It received such an overwhelmingly positive reaction at the show however, that the decision to proceed with its development followed shortly thereafter. 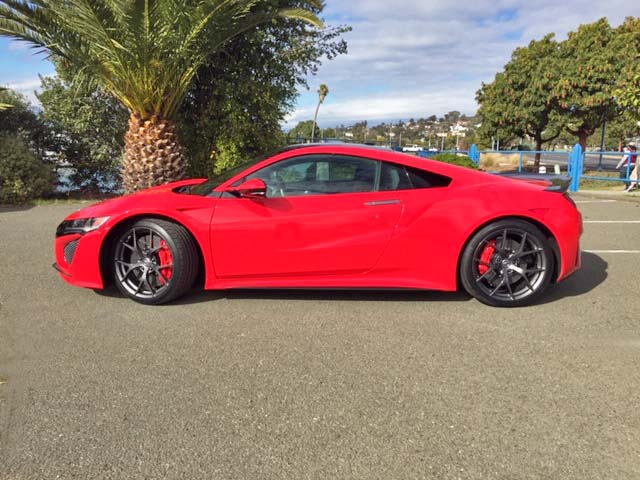 The original course of action for the second generation NSX was always for it to be a hybrid model, but significant changes took place over the lengthy period of its metamorphosis, and roughly halfway through the development process, a more revolutionary approach with advanced technology became the major focus, surpassing what was to have been a more conventional hybrid vehicle. Among its many innovations, this newest iteration NSX showcased a “man-machine synergy” approach with its Sport Hybrid Super Handling All-Wheel Drive (Sport Hybrid SH-AWD) – the first such technology in the normal realm of supercars – a categorization that it now justifiably warrants. This necessitated changing from a normally aspirated engine in a transverse orientation to a longitudinally mounted, twin-turbo V6, essentially, resulting in a complete clean sheet redesign. 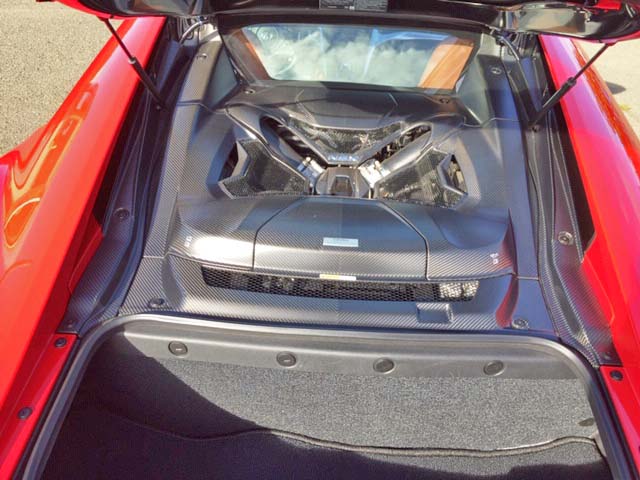 The 2020 Acura NSX, an example of the next generation Sport Hybrid’s SH-AWD power unit continues to be comprised of a 3.5-liter (3,493 cc) Twin-turbocharged (single-scroll) DOHC, 24-valve, mid-mounted V6 engine with both Direct and Port fuel injection, Drive-by-wire throttle and stainless steel quad exhaust outlets. It’s mated to a 9-speed, paddle shifted dual clutch transmission and Direct Drive Motor that generates instant engine torque response that also functions as a generator to constantly maintain the hybrid batteries’ charge state as well as consistently supporting driver initiated demands. Rear power unit systems work in conjunction with the two front electric motors and the mechanical limited-slip differential, which are enhanced by the capabilities of the front-mounted Twin Motor Unit (TMU) containing the two electric motors that independently supply power to the left and right front wheels, ultimately providing “active AWD”, increasing forward acceleration and continuously varying both positive and negative torque directed to the front wheels. This action results in a “direct yaw control” effect that enhances agility, stability, performance and response, or true torque vectoring, which is available at any speed in both throttle-on and throttle off scenarios. The TMU additionally provides regenerative brake force, assisting in braking demands, while at the same time recharging the hybrid battery.

The 9 DCT transmission is purpose built, with the clutch and differential placed side-by-side in a common housing, and with a parallel shaft gear set arrangement. 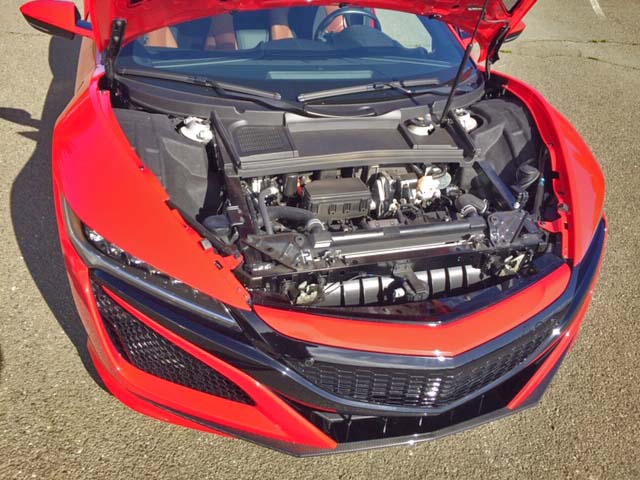 All of the power source is based on a space frame chassis made up primarily of aluminum in a new application – ablation cast aluminum frame members fore and aft combined with three-dimensional bent and quenched frame members that yield a high rate of torsional rigidity. The rear hub is now more rigid and the rear stabilizer bar is now stiffer. The front stabilizer bar’s stiffness has also been increased.

Like the space frame, a mix of lightweight materials for the body’s exterior makeup, including: sheet hydro-formed aluminum for the outer door skins; aluminum stampings for the hood and roof (with a carbon fiber roof optionally available); sheet molding compound for the fenders and deck lid; a carbon fiber front floor panel; and a high-temperature-resistant ABS plastic utilized in proximity of the engine. The composite twin fuel tanks are mounted behind the rear bulkhead in front of the engine. 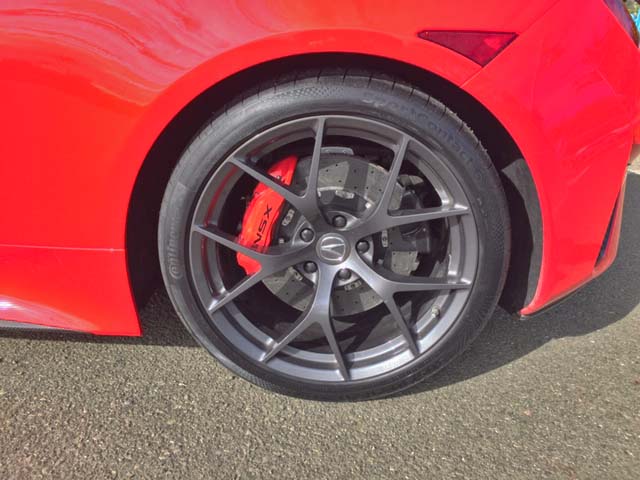 That covers all the basic “nitty gritty” elements of the new NSX’s mechanical makeup – probably more than most readers want to know or care about, so now for the car’s magnetic exterior visual appeal that has received only minor enhancements to the nose. 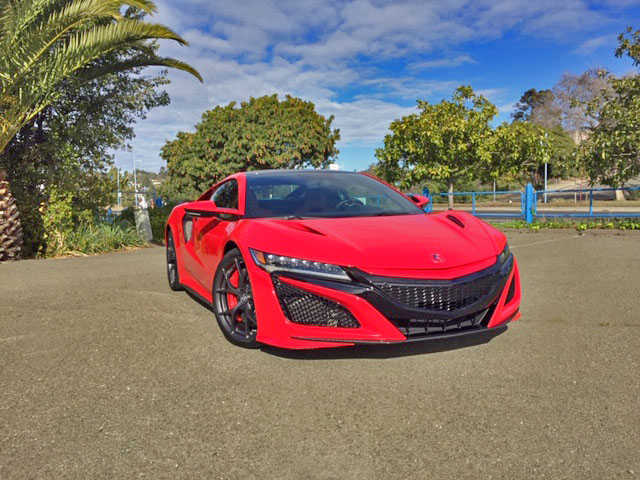 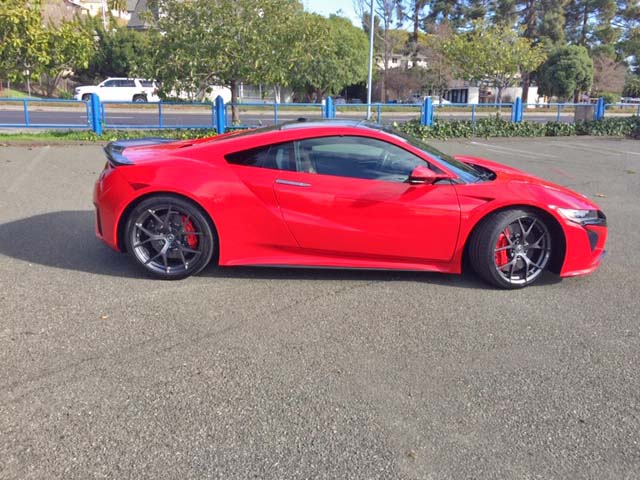 The exterior design is a glorious and harmonious blend of sharp angles and voluptuous curves, while being a case study in function dictating form, with total airflow management as a key element in delivering the level of aerodynamics required for effective and efficient thermal control necessary for the proper operation of its hybrid system. There are six different heat sources to be managed: the twin turbo engine, the 9DCT, the PDU, and the three electric drive motors. Providing sufficient cooling for these elements, airflow is handled through 10 heat exchangers positioned in the front grille area, side “flying C-pillar” air intakes, as well as through the engine compartment. Getting air out is just as important as getting the air in, and there are outlets positioned in the upper rear quarter sail panels, beneath the rear spoiler lip and in the lower rear fascia in the form of a large horizontal grille flanked by two large vents. 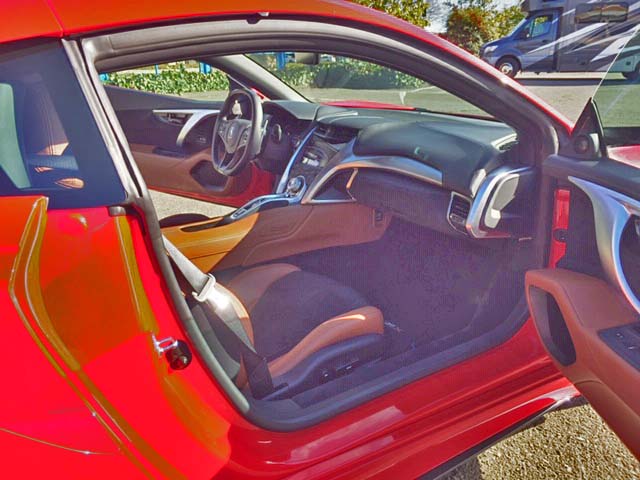 The NSX features one of the lowest centers of gravity in its class making ingress and egress somewhat difficult for ectomorphic types, but once situated inside (a helmet not withstanding), the interior exhibits the same dedicated attention to detail and functionality as the exterior styling. Interior Designer, Jonathon Norman pointed out that controls and switchgear are optimally placed for intuitive use, and the leather sport seats with Alcantara inserts are perfectly contoured and formed to provide excellent support for both boulevard cruising and race track exercises. The steering wheel shape and size feels just right.

To experience the NSX’s performance capabilities, there was the opportunity to
Get behind the wheel at the Transportation Research Center, a 4,500-acre complex of various road courses, including a 7.5-mile high-speed oval test track. which happens to be the largest independent vehicle testing facility and proving ground in the U.S.

During a media drive program, auto journalists were treated to piloting the new NSX in both real world driving scenarios as well as in high speed race track laps, and launch control demonstrations.

The 2020 Acura NSX is remarkably fast and incredibly smooth, while managing to do everything that a supercar should, and it does everything exceptionally well. It is a “poster car” for Acura’s Precision Crafted Performance.

Forward visibility is outstanding thanks to the super thin “A” pillar design, while the rear side view is somewhat limited by the large flying “C” pillar. The visors are minimally useful depending upon one’s height. Ingress and egress is much easier than with most other supercars. There’s plenty of headroom for those up to 6’5”, even with a helmet on, which can pose some difficulty when entering and exiting the vehicle. 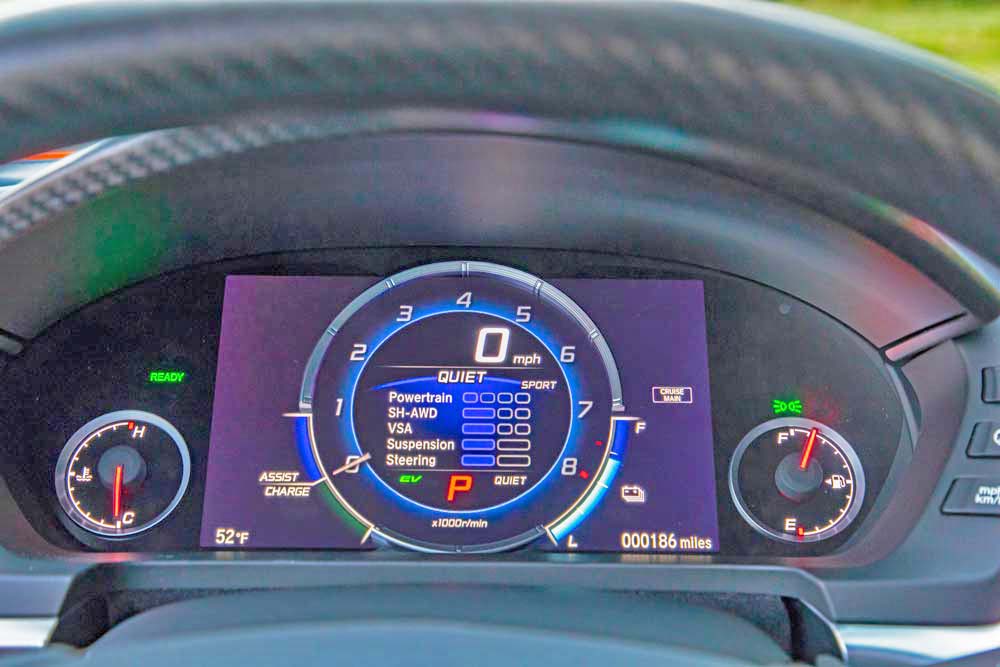 The NSX expands the range of available driving experiences with its Integrated Dynamics System, whose 11 systems provide uniquely tuned experiences for each driving scenario, controlled through a circular knob in the center stack. The left two positions are Quiet and Sport, while the right two positions are Sport + and Track with Launch Control which are all pretty self-explanatory. Sport + provided the most enjoyment for challenging twisty roads, with the Track setting optimizing elevated performance level capabilities. The individual settings also deliver a wide range of tunable sound levels, with a 25dB range between Quiet and Track modes.

Pressing the center button of the IDS dial once places the 9DCT in automatic operation, while pressing it twice enters into manual mode, with control achieved via the wheel mounted paddle shifters. Even in the automatic mode, it is possible to dive further into a turn at full speed before braking, and it is possible to apply heavy throttle even before exiting the turn, going almost immediately to full throttle. Overcooking a corner, one can feel the car twitch, but it immediately recovers thanks to the AWD system. Braking is phenomenal with the ElectroServo System’s 6-piston Brembo calipers clamping onto the 14.5” front ceramic rotors, combined with regenerative braking, and with no indication of fade after hard use. Minimal oversteer may be encountered during trail braking, but again, the AWD comes to the rescue. 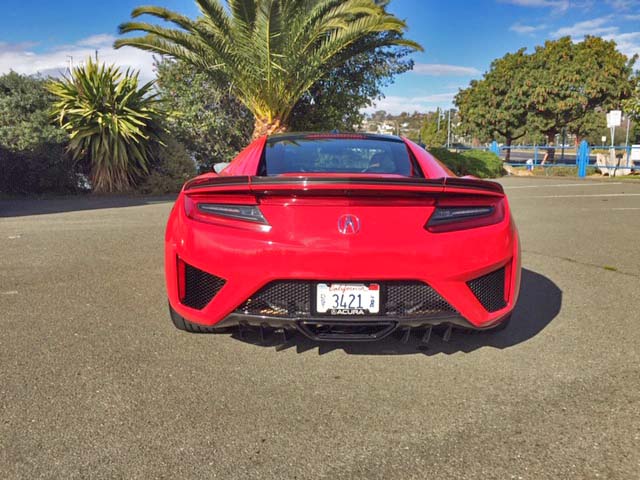 Handling is awesome and forget about shuffling hands about on the wheel, as turns are conquered simply by turning with hands in a fixed position. The ride quality is most forgiving with the coil over Magnetorheological dampers at each corner – railroad track crossings and bumps in the road are barely noticeable. 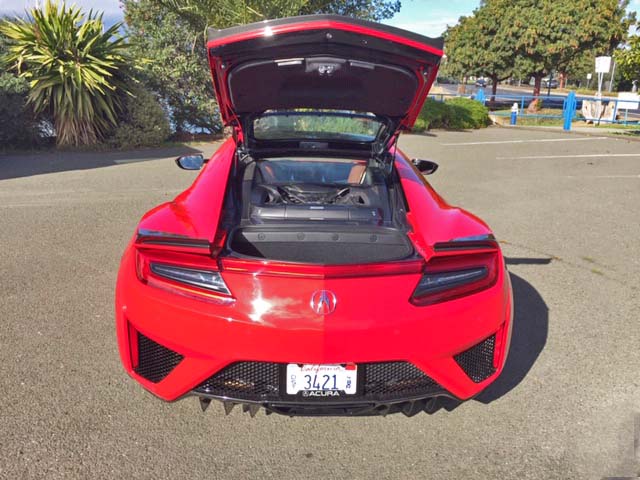 The Launch control is the smoothest I’ve encountered to date, with no complicated process or settings to fiddle with. Simply set the IDS to D1, fully depress the brake pedal, punch the accelerator pedal to the floor, and when the IP signal displays the “launch ready” prompt, release the brake, keeping the throttle nailed and the NSX takes off like a rocket with no tire slip, ripping down the chosen course, while shifting gears at expressly the right moment along the e-ticket ride. There’s no sensation of strain on the running gear, and in fact, the process can be repeated over and over again with no ill effects. 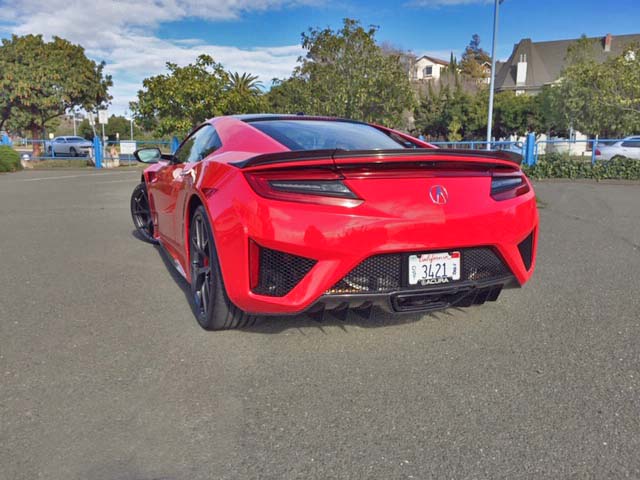 Bottom line, the Acura team positively “nails it”, for what may well be the perfect supercar, and even at the fully loaded price nearing the $200,000. mark, It’s a bargain. The NSX production is based on an as ordered basis. So if you’re anxious to own one, order early. The revolutionary and enhanced 2020 Acura NSX truly delivers the New Sport eXperience. Audi, Ferrari and Porsche beware.

High-output lithium-ion battery pack consists of four modules, each with 18 individual battery cells contained within a specially-designed, caseless structure that utilizes the vehicle body itself for a lightweight yet sturdy housing. 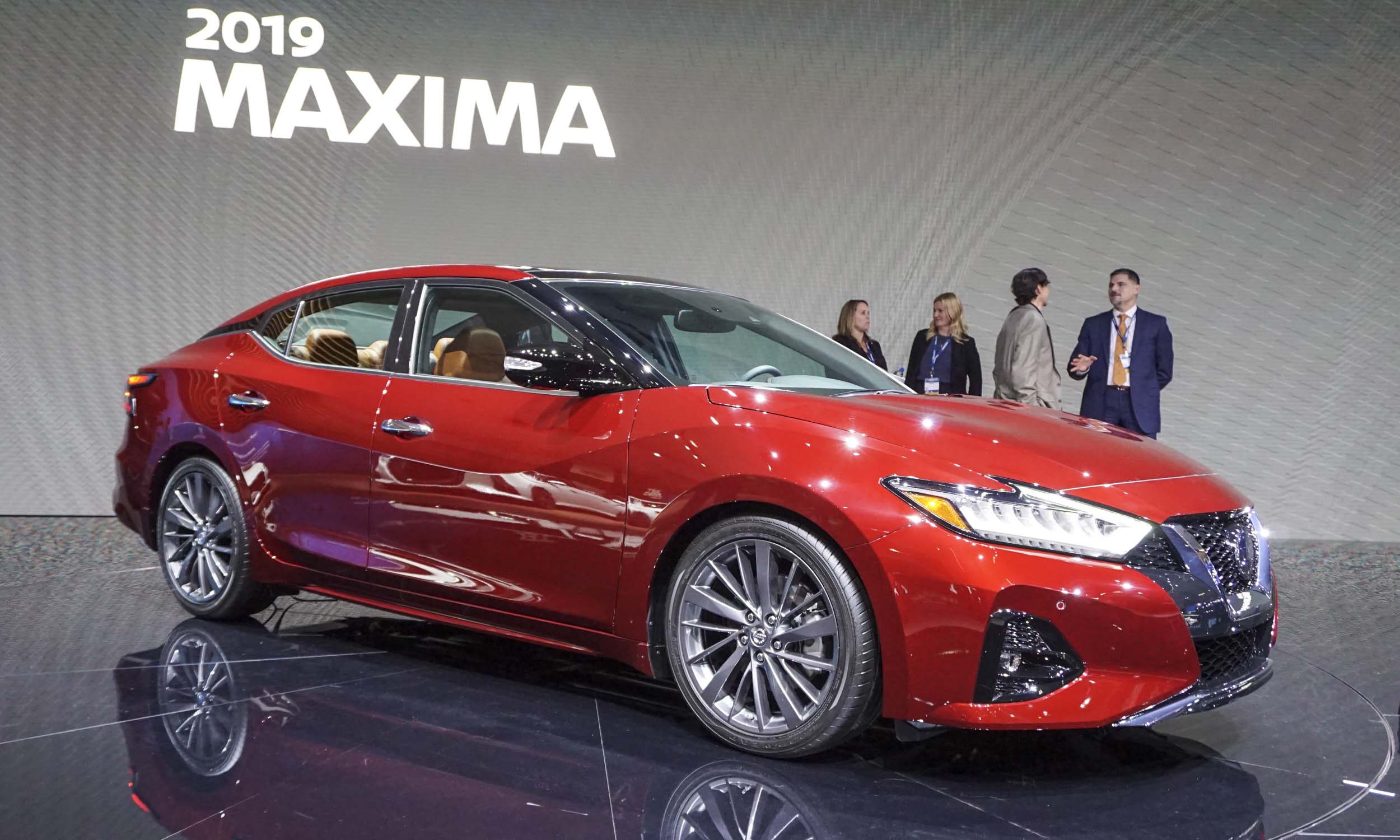 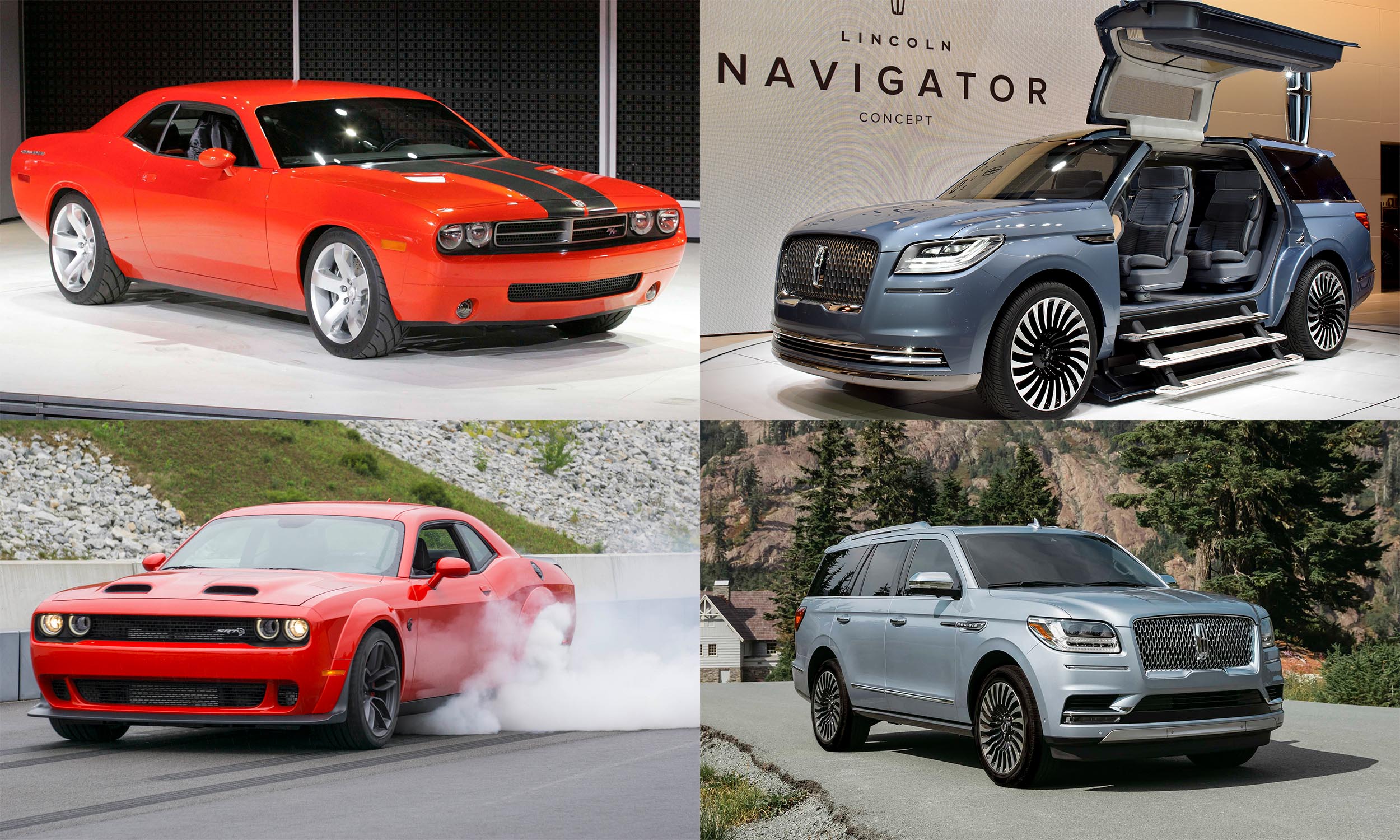