By Barbara & Bill Schaffer
Automotive demand seems to require that all car manufacturers produce SUVs or crossovers and lately that demand has grown to include a three-row SUV. Volkswagen had two very good two-row SUVs: a compact Tiguan and the luxurious Touareg. Unfortunately, the Touareg wasn’t ringing the VW cash register enough and they stopped selling it in the U.S. market after the 2017 model year. It was replaced by the all-new three-row Atlas in 2018. 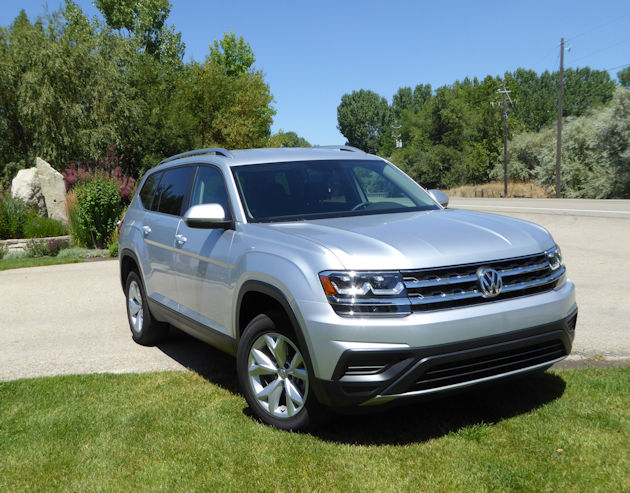 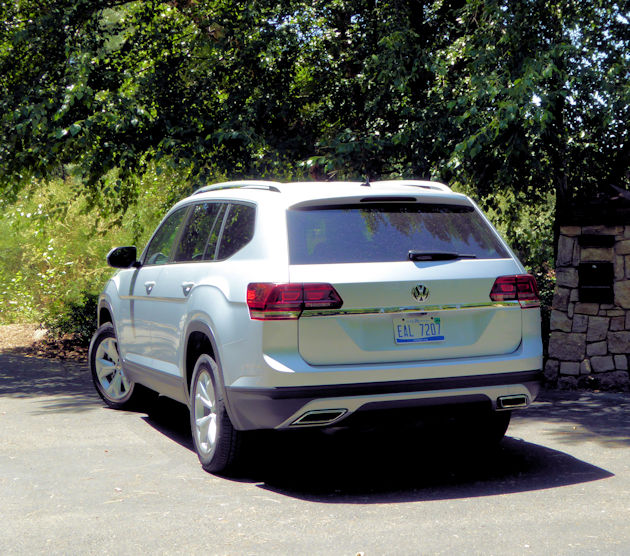 MQB Architecture
The Atlas is the largest VW sold in the United States and is build on the company’s award-winning Modular Transverse Matrix (MQB) architecture. The new body design is quite efficient for an SUV producing a low coefficient of drag of 0.34. 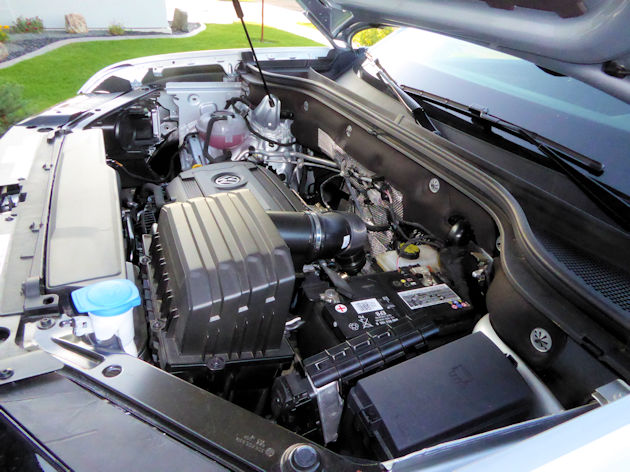 Two Engine Choices
The Atlas 2.0T S is the only SUV in the VW SUV lineup powered by the venerable 2.0-liter turbocharged four-cylinder engine with a very good eight-speed automatic transmission. The four-cylinder model is only available in a front-wheel drive configuration. This is an adequate entry-level model for warmer or southern climates, but without VW’s 4Motion all-wheel drive, it’s not what we’d want for the snow belt states. Moving up to 4Motion required the optional 276-hp 3.6-liter VR6 engine. 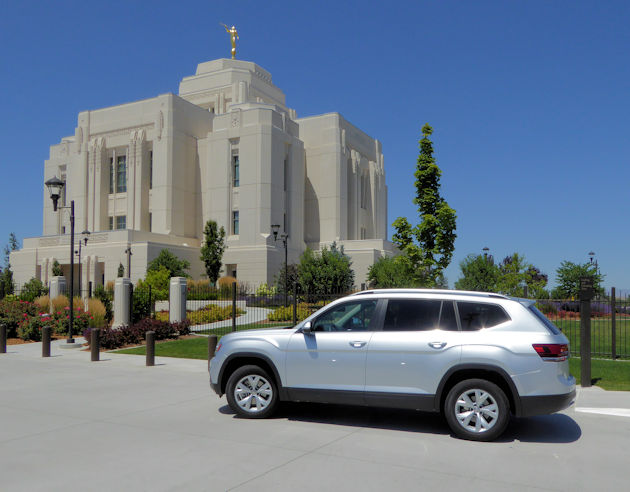 Spunky 4-Cylinder Engine
The four-cylinder version we drove did produced some zippy acceleration around town but was somewhat lacking in passing power on the open road. However, buff magazine tests indicated that the front-drive four-cylinder engine was quicker than the 4Motion V6 in 0 to 60 mph tests. The four-cylinder turbo was listed with a 7.2 second 0 to 60 mph test time. The smaller engine is also fuel-frugal, with a good EPA fuel economy rating of 22 mpg city, 26 mpg highway and 24 mpg combined. We averaged and impressive 25.7 mpg during our week of testing. The V6 is rated at 18/25/20 mpg. 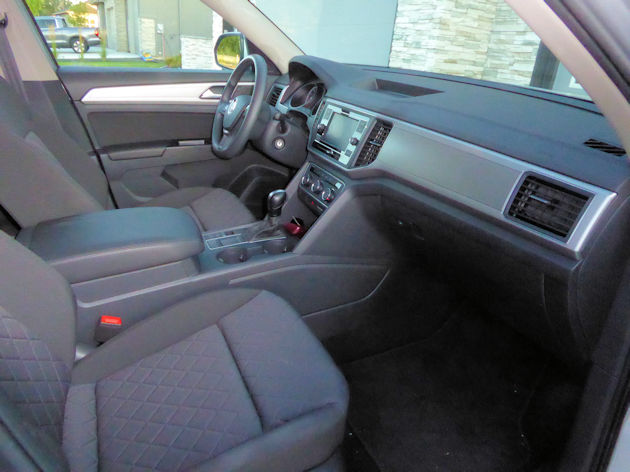 Spacious Interior
At first glance the Atlas 2.0T S appeared to be somewhat simplistic or outdated-looking, but when we inventoried the features, it was much better equipped than it appear initially. The first thing we noticed was how spacious the interior is. While it’s not going to win any awards for luxury, it’s roomy, with comfortable seating, and it had one of the best systems we’ve seen for stowing passengers in the third row. With no passengers in row two, the seat folds and scoot forward providing relatively easy access. Once that’s done, the second row can be loaded. 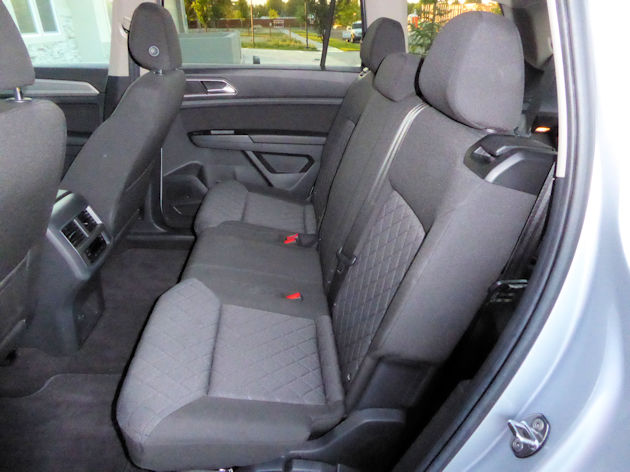 Comfortable Seating
We did find the cloth seats comfortable and supportive. They are made of a hard surface cloth that should be durable. The ride is comfortable and controlled, and the cabin is quiet. We did think the air conditioning was weak and seemed to be taking a long time to cool the interior during the hot weather we experienced. 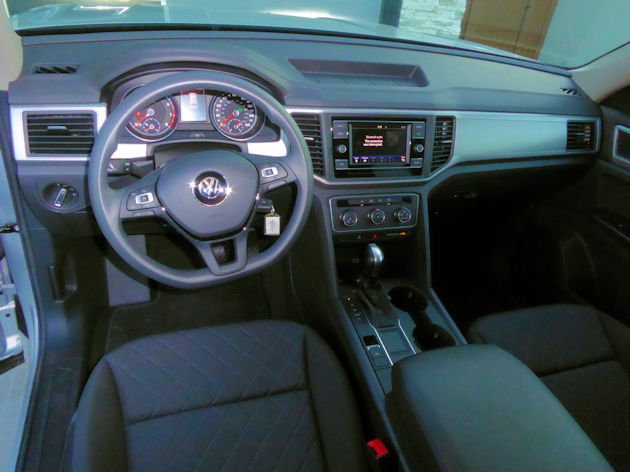 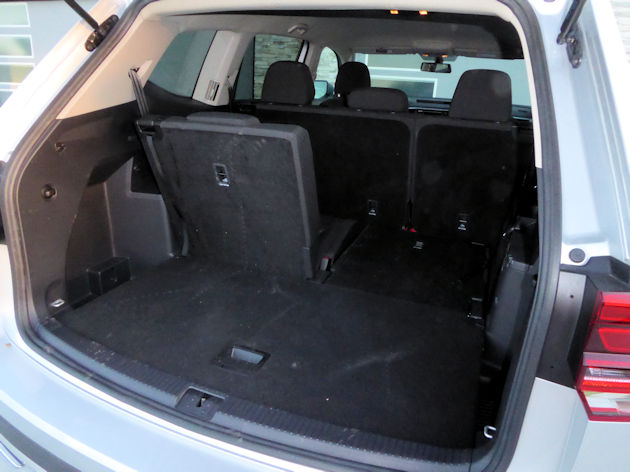 Excellent Cargo Space
The interior space feels massive and by the numbers allows for 20.6 cubic feet of cargo space behind the third row. That expands to 96.8 cubic feet when the second and third rows are folded. That’s more space than in the Chevy Tahoe.

Pricing
A big appeal is the price, which is only $31,890, including the destination charge, for the base S model. Atlas is available in six other trim levels: SE, SE with Tech, SEL, SEL R-Line and SEL Premium. That number increased to 13 models when 4Motion was added to the equation. Base prices can go as high as $49,390 plus a little more when VW aftermarket accessories are added.

Conclusion
We think the Atlas should be a good competitor in the grouping that includes vehicles like the Ford Explorer, Toyota Highlander and Honda Pilot. However, we would suggest stepping up to one the SE or SEL models to add a few more important features and comforts. 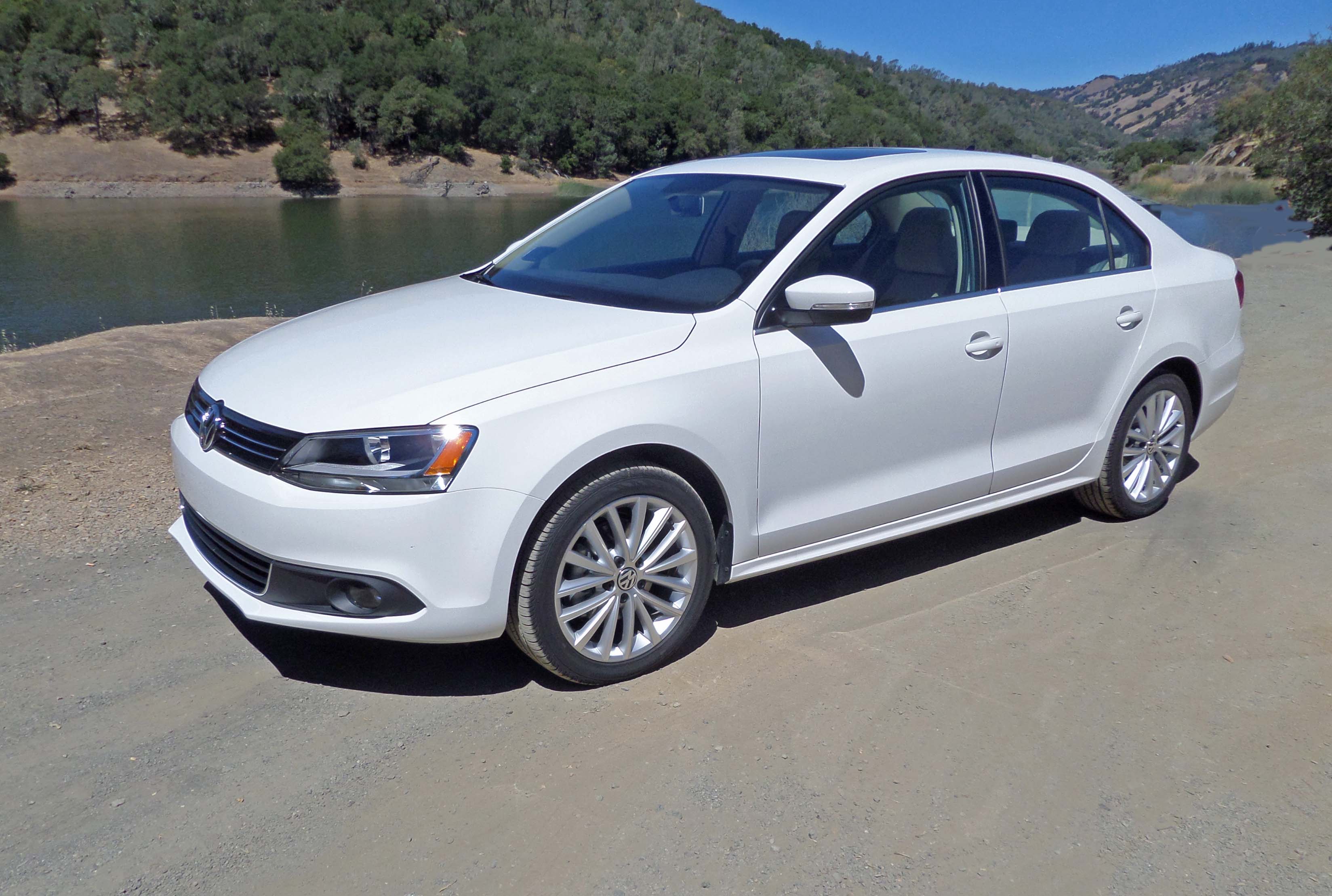 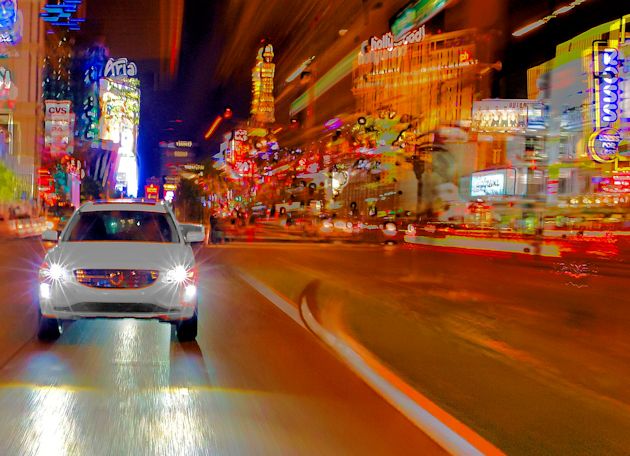