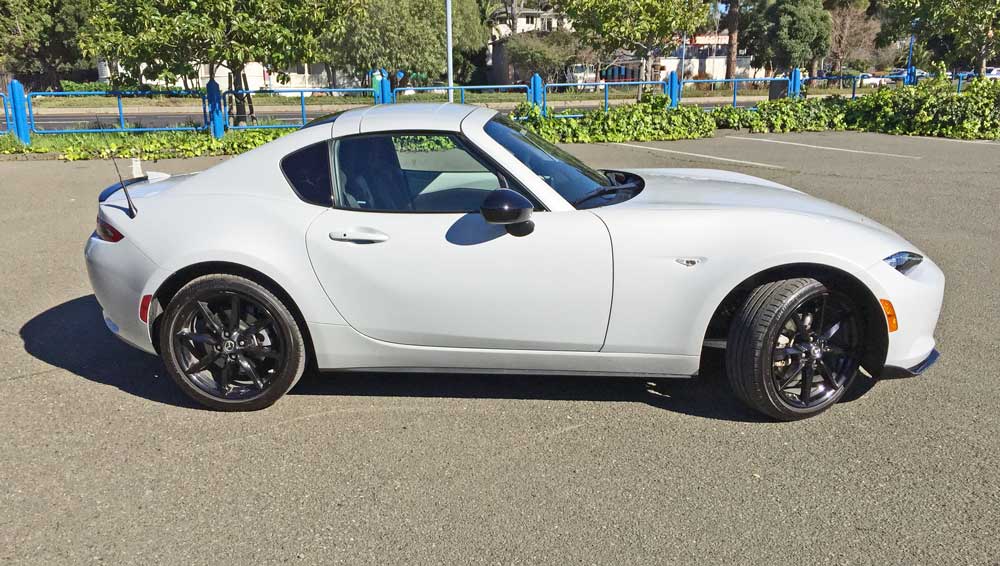 The 2019 MX-5 Miata is available in four levels of trim and two top configurations – soft and a power retractable hardtop. The soft-top version comes in Sport, Club, Grand Touring and a special 30th Anniversary model. The retractable is available in all but sport trim. All MX-5 Miatas continue to feature Mazda’s full suite of SKYACTIV technology along with their KODO “Soul of Motion” design philosophy. 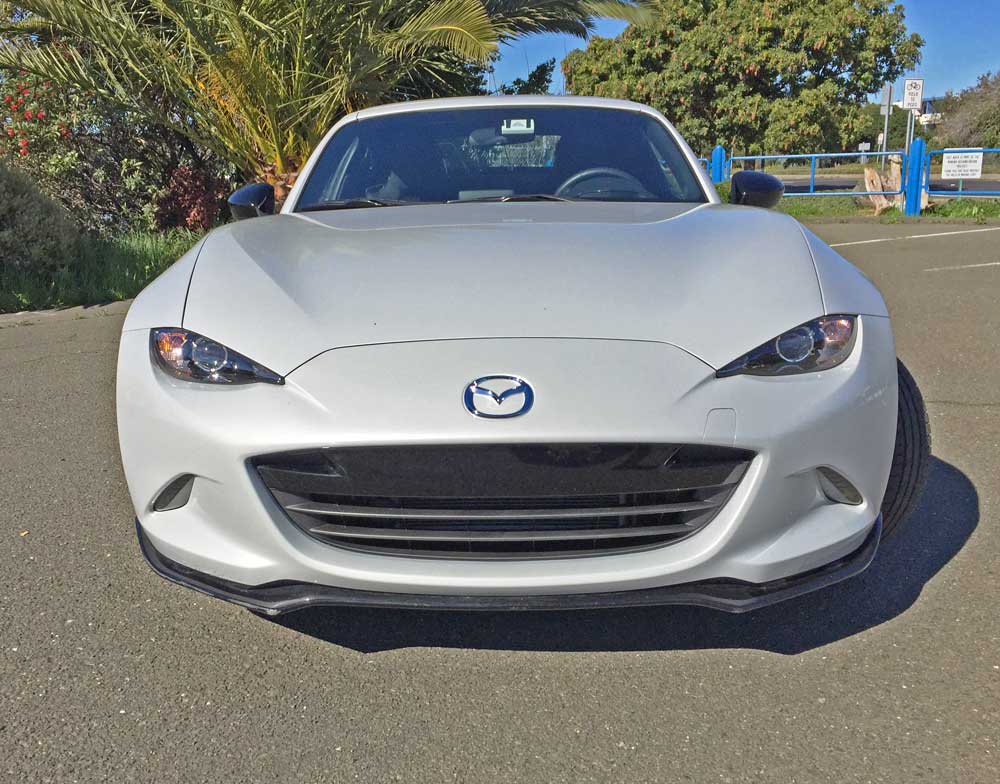 Visual changes over the past several years were very subtle at best with themed editions, special paint and trims until 2016, when it became stunningly beautiful presenting an exceptionally appealing face. “RF” by the way and Its power top stows to display a Targa-like open air cruiser rather than a complete droptop. With the top in the up position, the overall form is not unlike that of a mini-Vette Coupe. Top operation takes only 13 seconds in either direction. 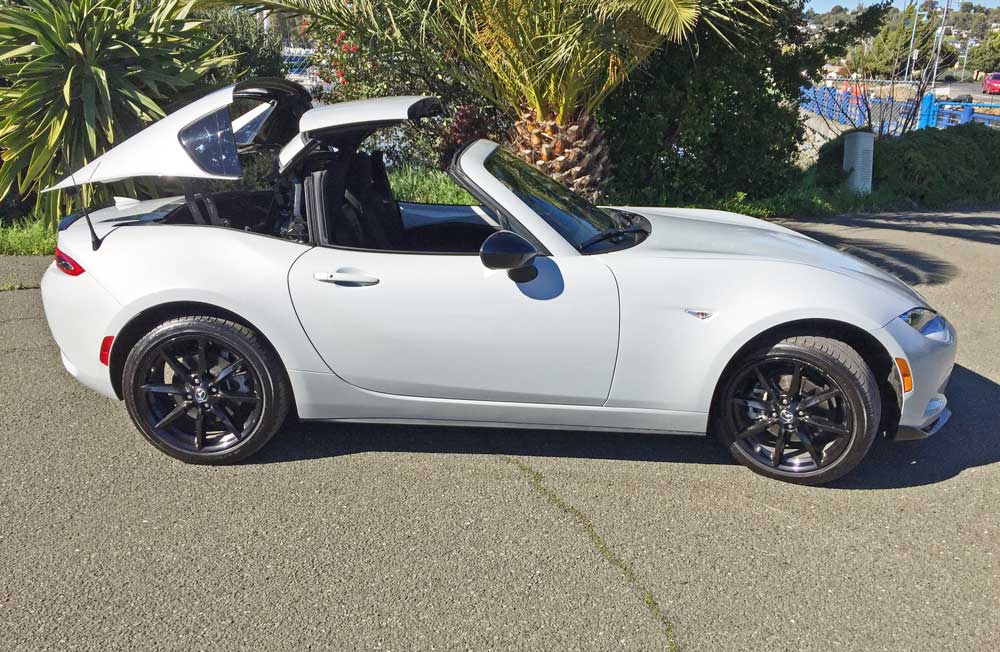 A roadster is by definition a convertible or open top vehicle, traditionally with a soft cloth top. Mazda has offered a Power Retractable Hard Top, now referred to simply as RF, which stands for Retractable Fastback, for both Club and Grand Touring models. The basic “Jinba Ittai” mission statement for the Miata, which translates as “the rider and horse as one” continues. 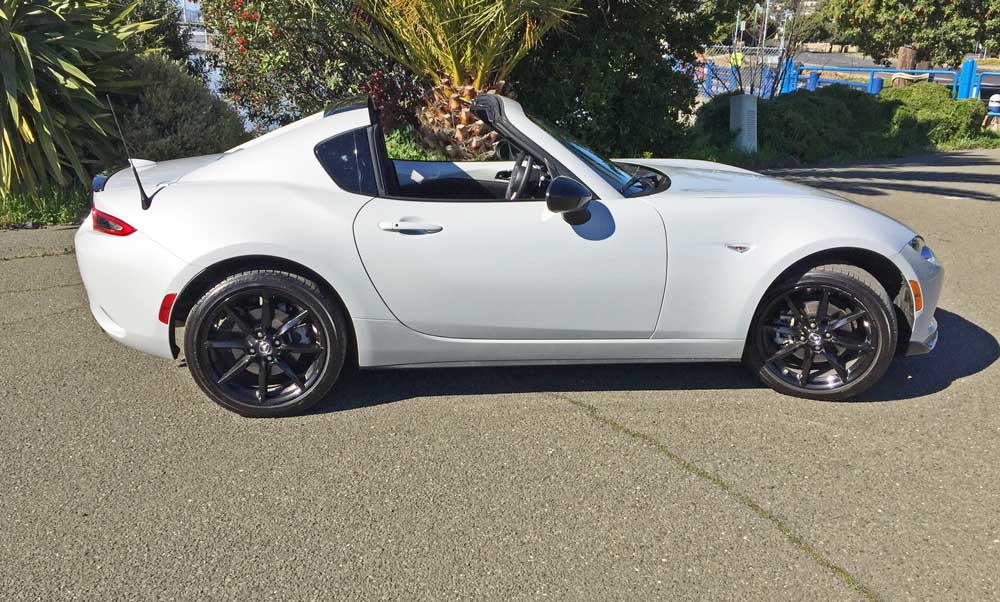 The Miata’s latest overall design statement is now a breath of fresh air, featuring a long hood, abbreviated overhangs, a cropped cabin space that’s moved far back on the body and large wheels moved as far forward and aft as is practical toward all four corners. The car is on a smaller scale than before with some styling cues that seem to display a European influence – the Jaguar F-Type comes to mind. The design team’s goal was to move forward, through modernization, but without sacrificing the car’s purity and heritage. The profile is lower and more fluid, with all of the exterior panels except the windshield frame and doors made of aluminum. Seats are more than 35-percent thinner than pre-2016 model’s, thanks to a net and urethane seat material that replace traditional
springs. 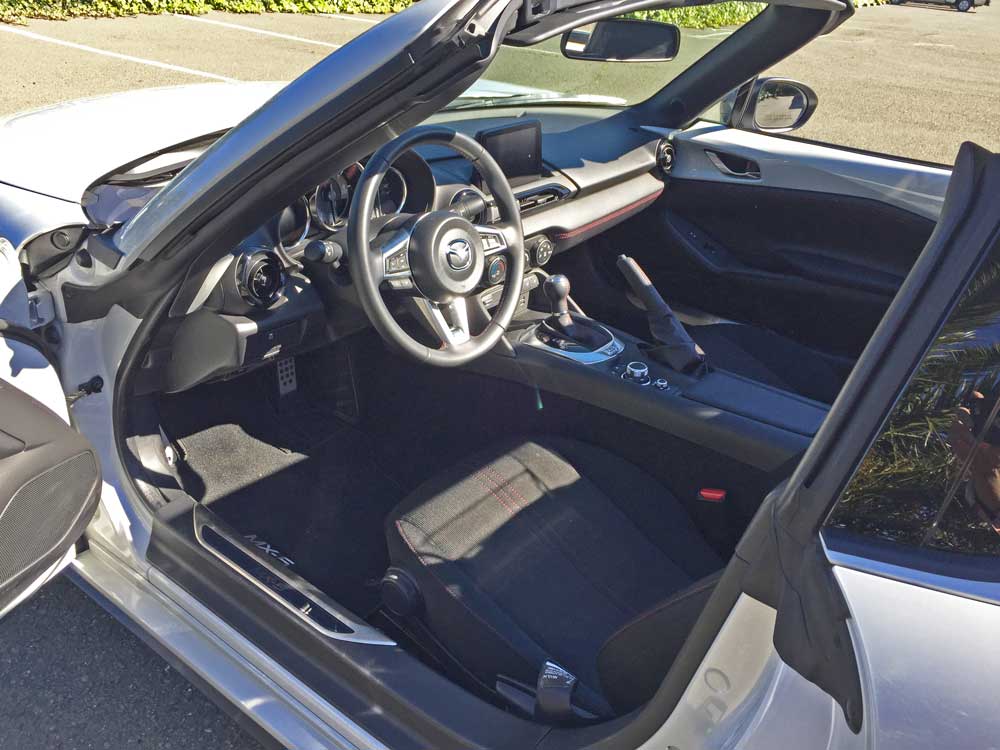 The two-seat cockpit showcases a human-centric driving position, focused around the driver, with things like the pedal position optimized to fall in-line with the driver’s natural foot movement. The hood is now lower and the windshield A-pillars were moved aft and made more upright for enhanced visibility. Exterior paint colors now appear on the door panels – all combining to provide a greater sensation of the outside world. Passengers are positioned more inboard to feel in-line with the center of the vehicle, but passenger space can seem tight for those 6’4” or more. 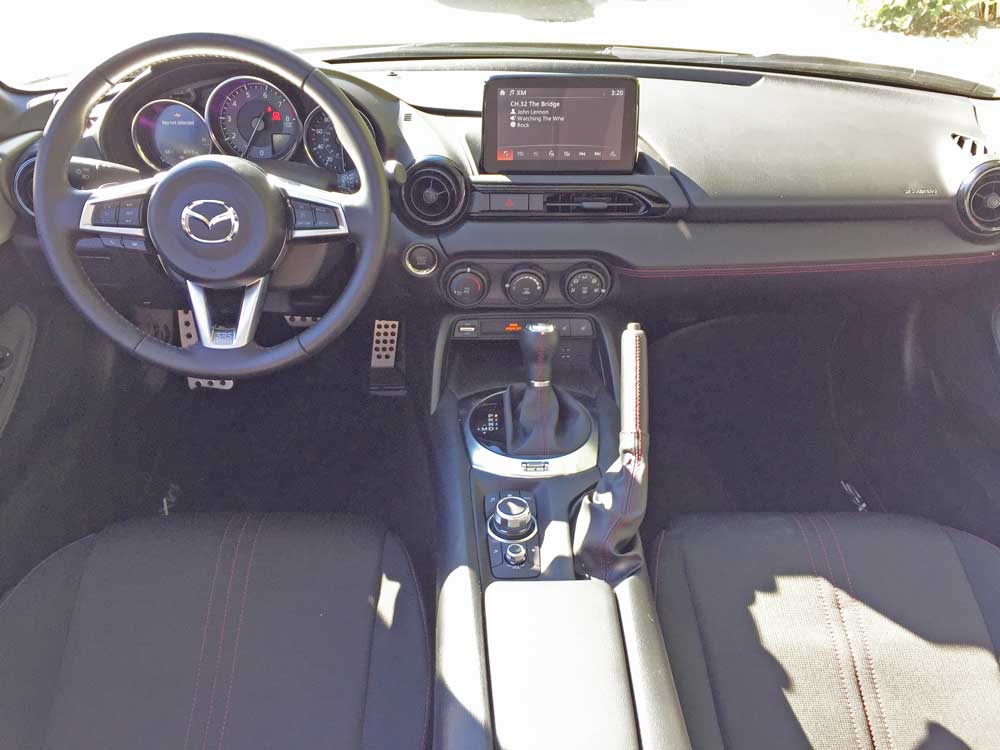 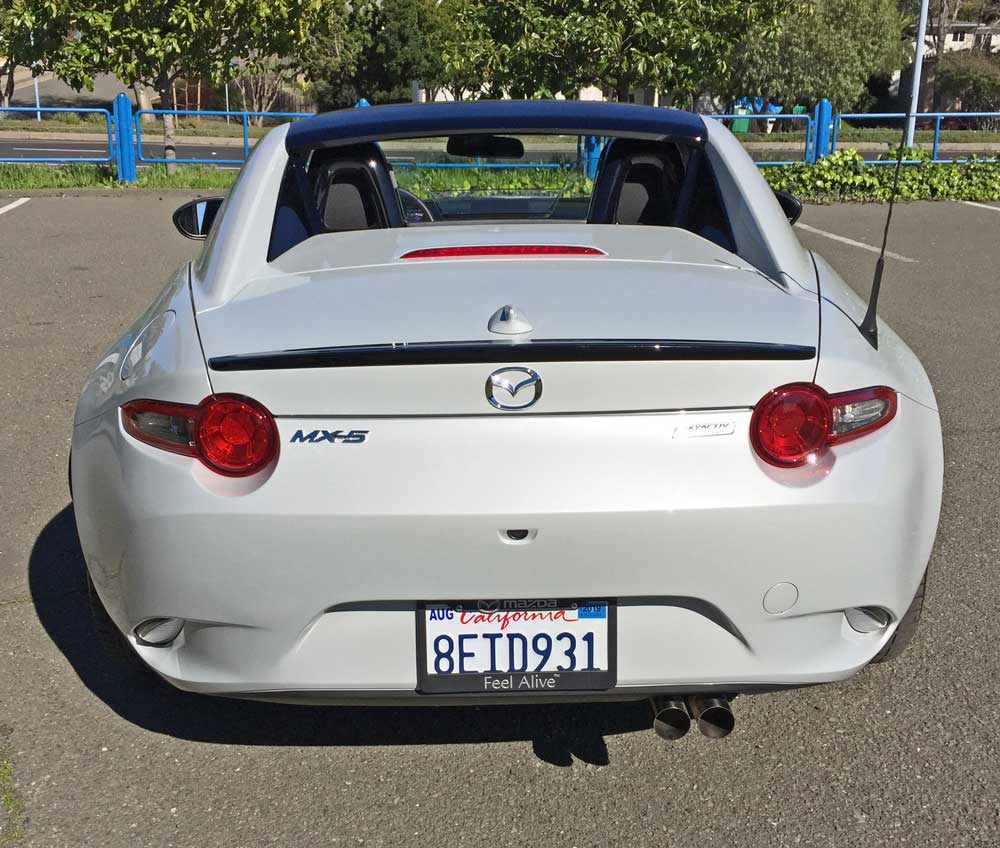 My most recent test Mazda MX-5 Miata was a 2019 Mazda MX-5 Miata Club RF model with the six-speed Sport automatic transmission. The exterior finish was sprayed Ceramic metallic and came in Black and Ceramic tones with Red double stitching. The base price was $32,945., with the final sticker ringing up to $34,265. after factoring in optional fare and the delivery, processing and handling fee. 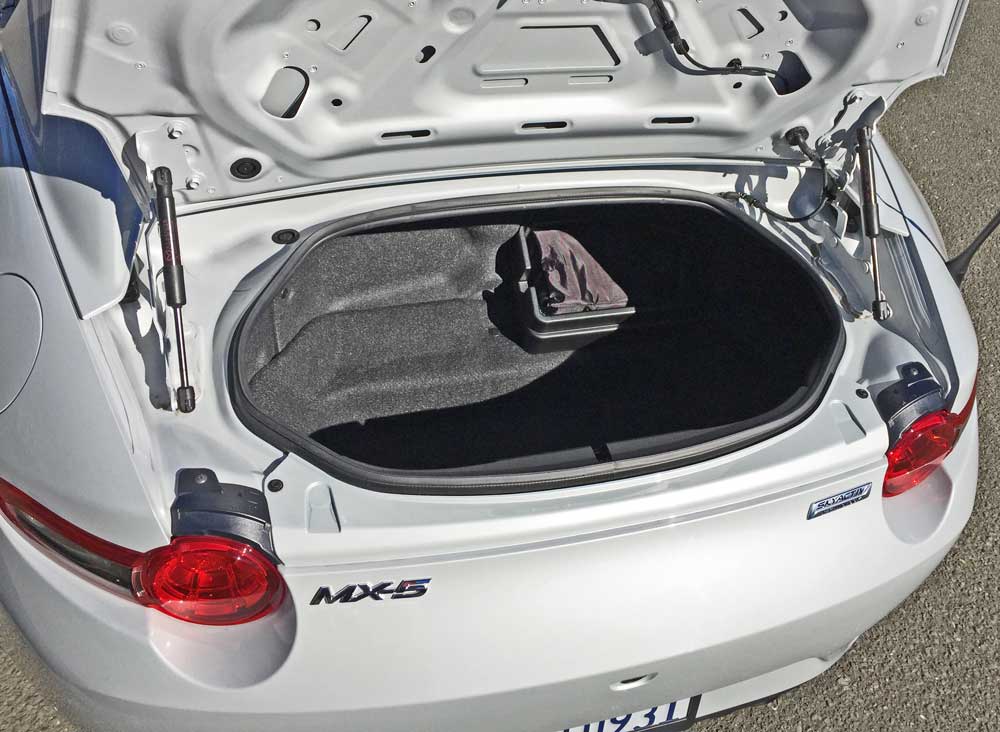 The new 2019 Mazda MX-5 CLUB Miata RF is a huge success as an affordable, fun-to-drive, pure open air roadster thanks to its Kansei engineering, which focuses on understanding how the car feels through the driver’s sense of touch, how it sounds at speed, and how it looks in open air form, rather than focusing on zero-to-60-mph acceleration figures.

The 2019 MX-5 Miata lineup has lost absolutely none of its appeal, regardless of the model chosen or type of type chosen. This latest iteration open-air sports car now ranks in a higher status in every respect. 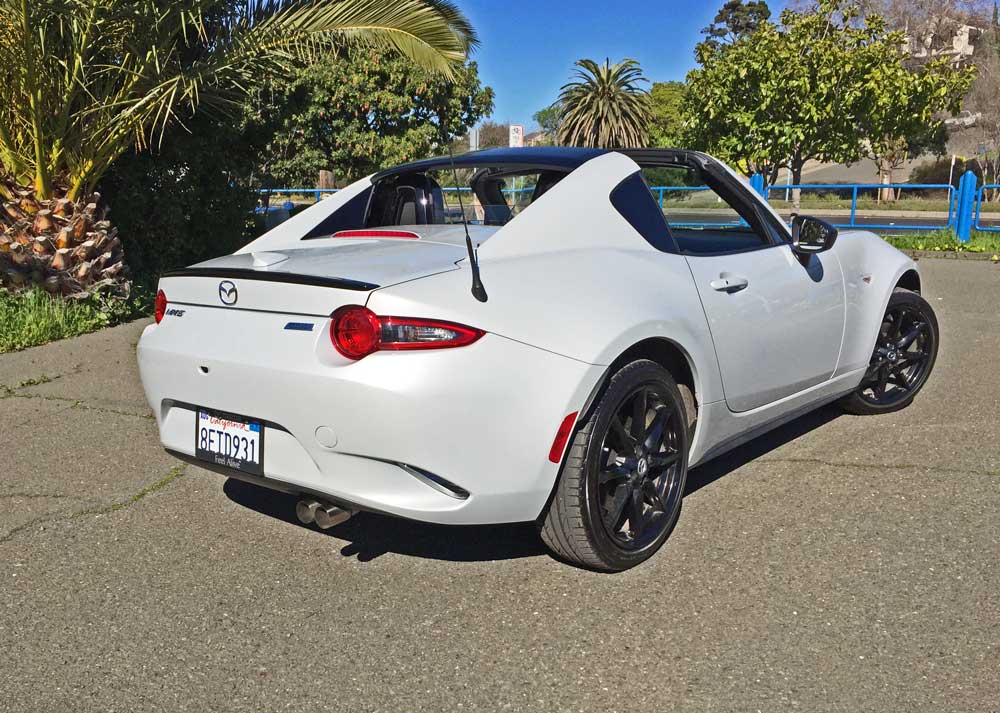 Acceleration is more than adequate. It may not seem blistering to some, but is certainly quick enough to provide a heightened level of driving fun. When prodded with gusto the engine’s growl is pleasing enough, and doesn’t register as offensive at all. but now also features a more pleasing, throatier note from the exhaust, which is sure to generate even wider smiles and perhaps even a little LOL. Handling is crisp and precise with pleasing throttle steer properties, and the car exhibits an excellent front to rear balance.

On the negative side, when riding as a passenger the co-pilot’s space is tight for my 6’4” frame. The driver’s side is somewhat tight as well, but posed no real problem when driving. Additionally, the wind noise around the driver’s outside mirror might seem excessive to some at speed, and trunk space is basically limited to one rollaboard, but a good sized one – enough for a weekend getaway for two. 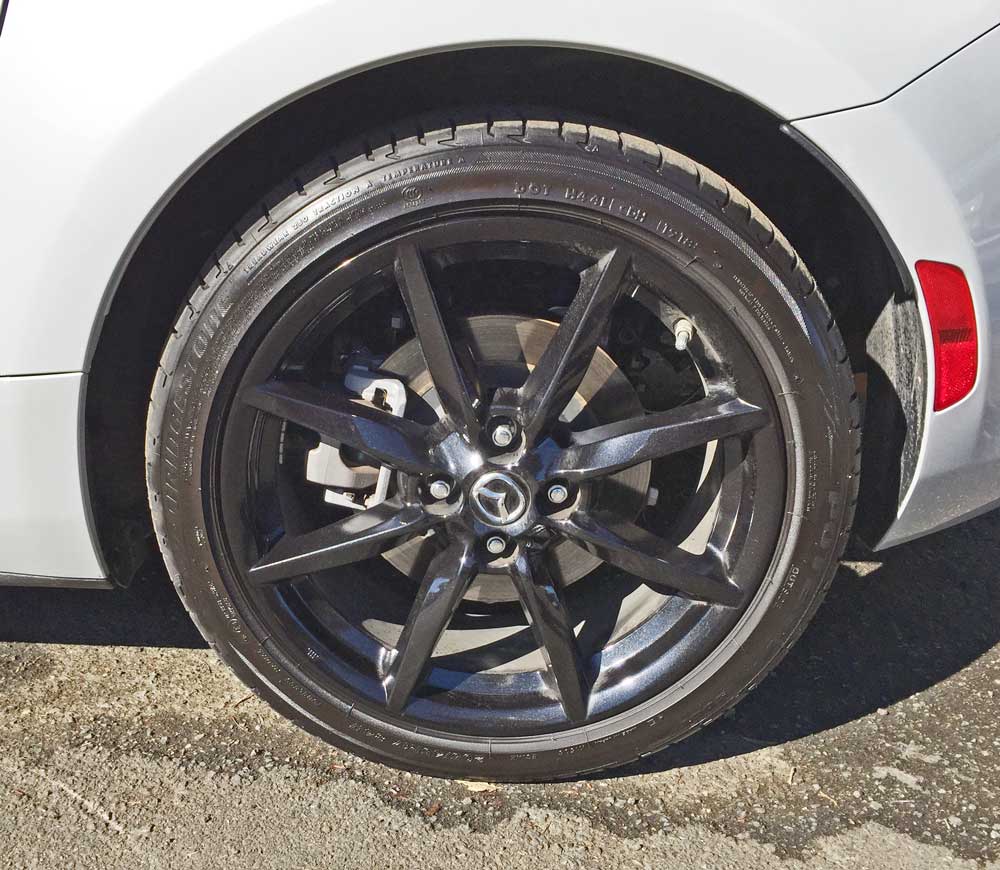 The MX-5 Miata remains a true sports car with heart, in keeping with Mazda’s “Zoom-Zoom” spirit. In my mind, it will always be a Miata, (MX-5 or not). Kudos for the genuine sports car feels and looks as well as the easy to operate retractable hardtop. Essentially, the 2019 MX-5 Miata Club RF sportster is ready to roll off the showroom floor and onto the track once you add a roll bar and five-point harness to meet sanctioned racing requirements. Long live the Miata. Oops, I meant MX-5. 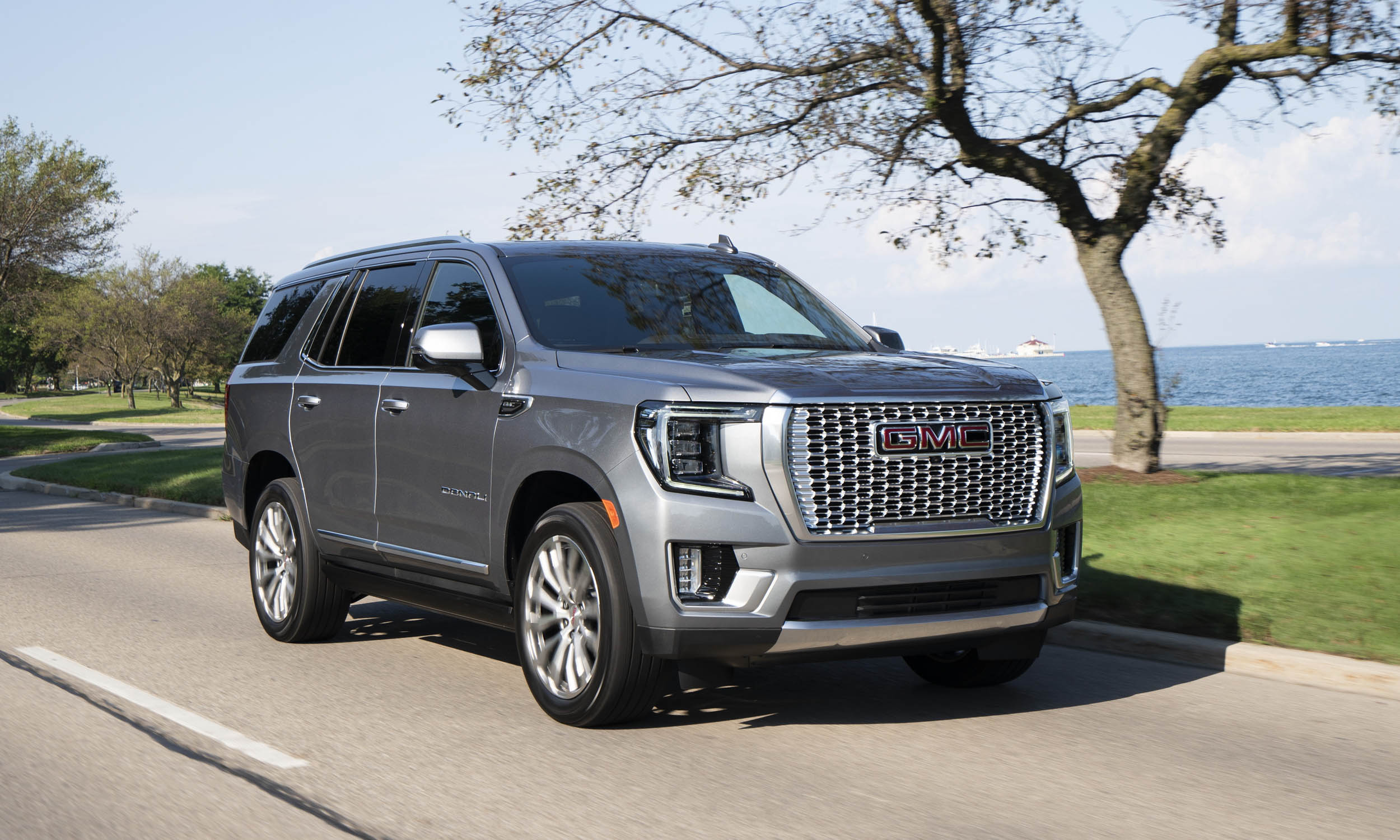 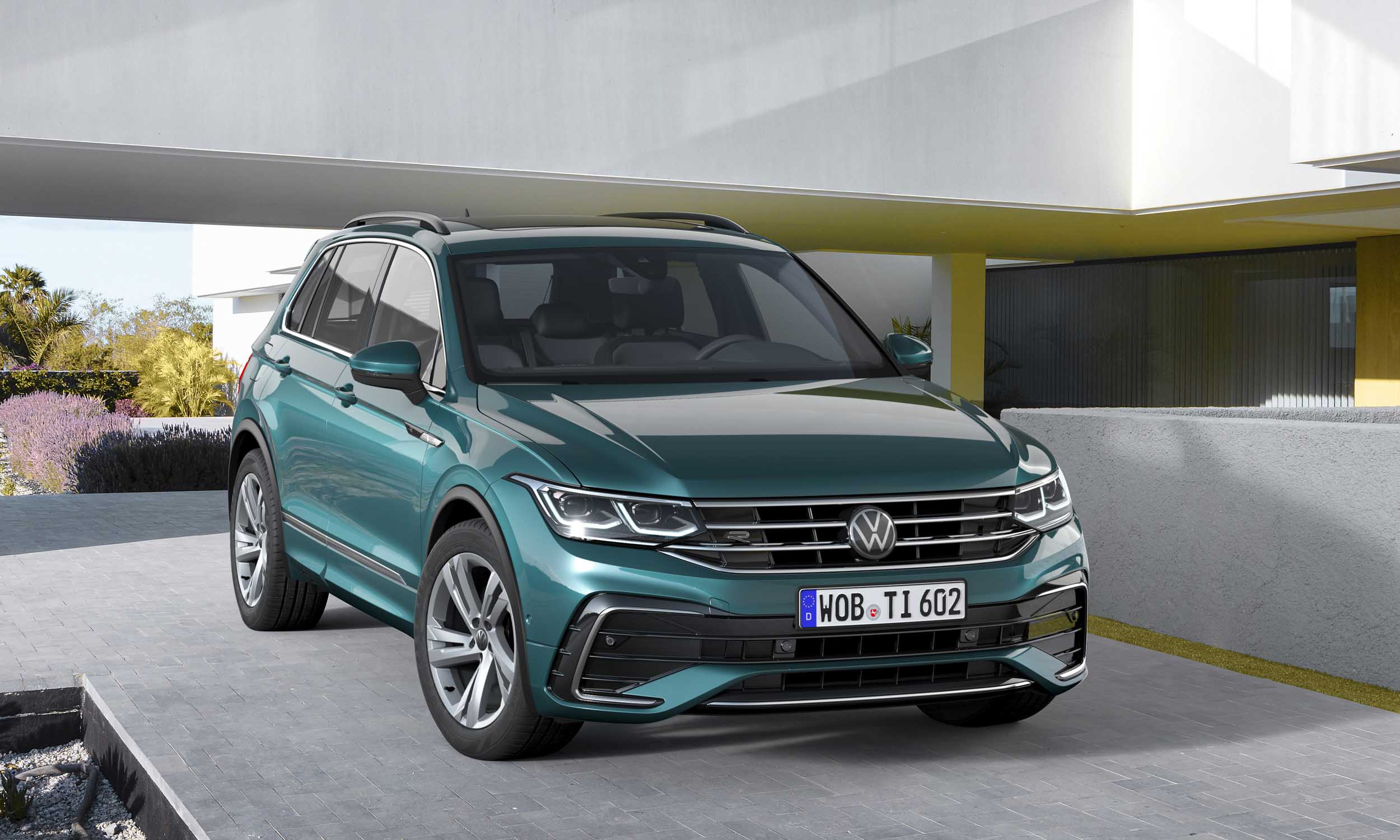