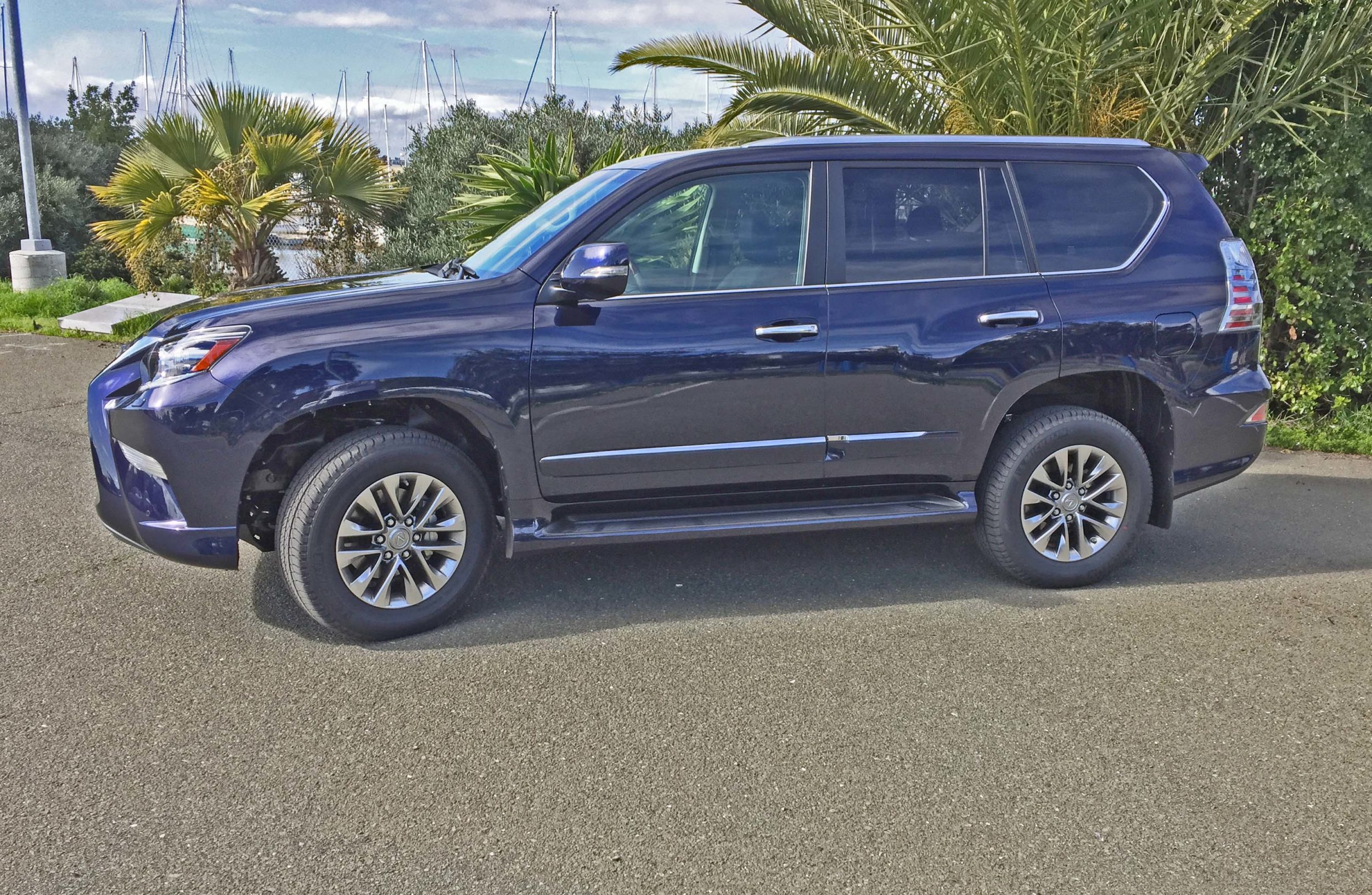 Lexus, Toyota’s luxury division was one of the earliest players in the luxury SUV game, kicking off with their RX Series. Several moons have passed since, and now the Lexus GX 460 Luxury ranks as one of the top vehicles on the full size luxury SUV field for both on and off-road use.. It used to be one of just a few in the full size category, but now the field continues to grow and escalate in popularity. Range Rover has always been there of course along with others, but lately several other high-end auto manufacturers, even exotics have joined the fray, or at least have announced their intention to do so. 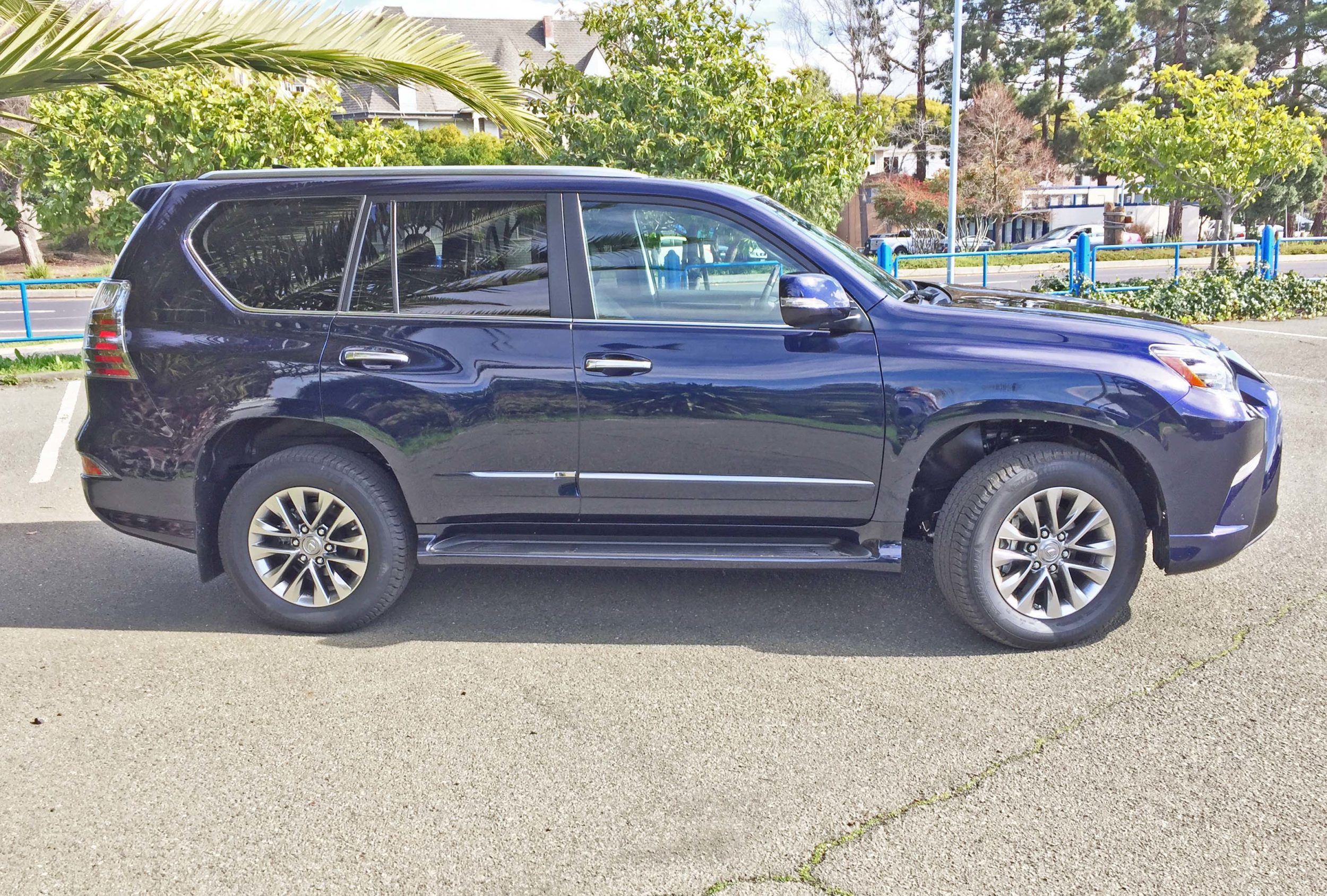 The Lexus GX 460 was the third luxury utility vehicle in the Lexus SUV lineup and it was first introduced for the 2002 model year. It was sized and priced between the RX 330 and the LX 470 and has won several awards and recognition since its debut. The second generation GX 460 bowed in 2009 as a 2010 model.

A redesign in 2013 incorporated the Lexus signature spindle grille and enhanced cabin styling. The 2019 Lexus GX 460 has progressively advanced as a fully capable SUV with full-time 4WD and advanced Dynamic Control systems. The GX 460 is the luxury-oriented U.S. version of Toyota’s Land Cruiser Prado sold globally. It shares its platform architecture with the Toyota 4Runner. 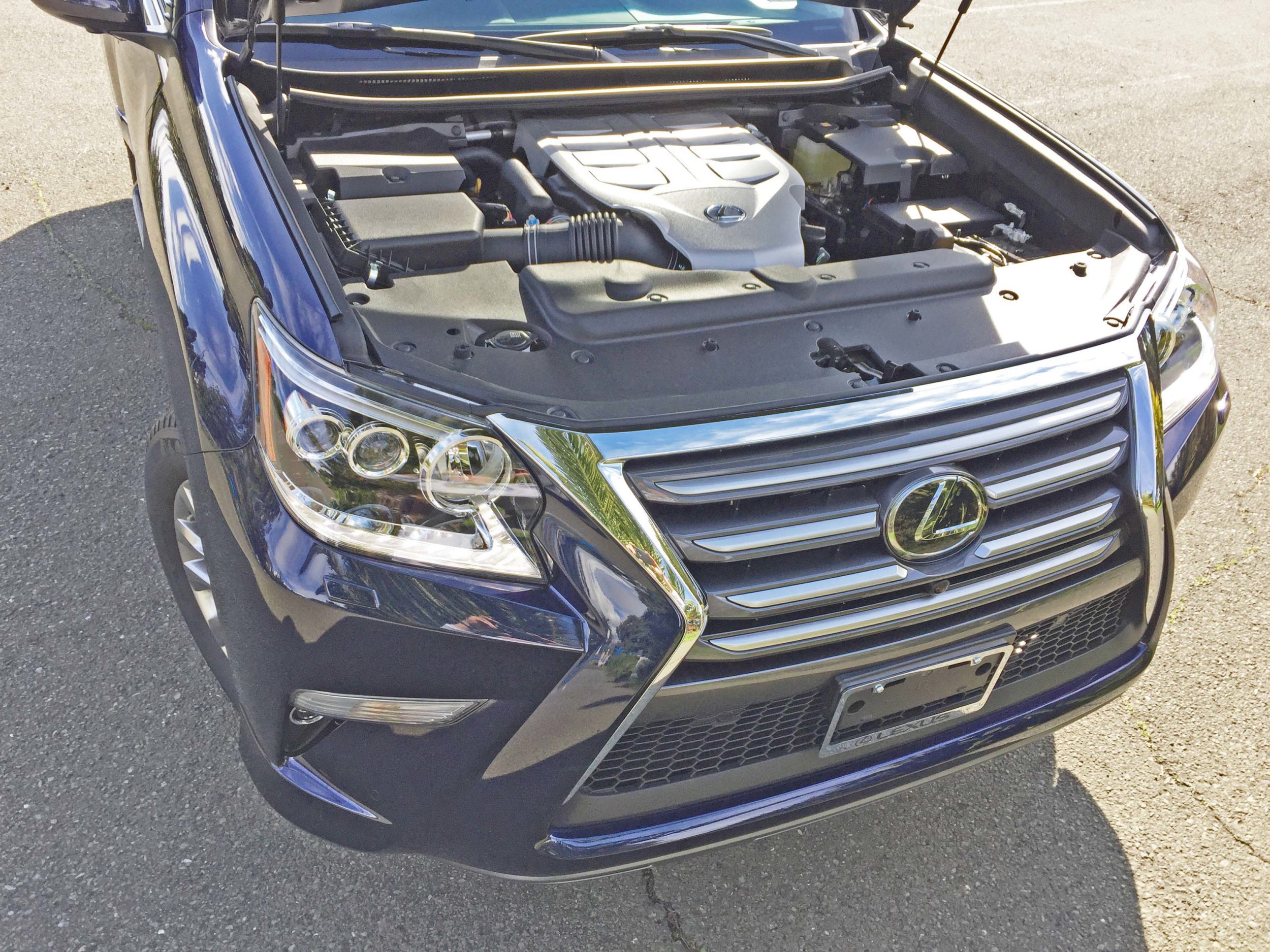 It is a three row SUV that seats up to seven and comes in three trim levels: a base or standard model: a Premium model; and the flagship GX 460 Luxury model. Power for all trim levels is provided by a 4.6-liter, DOHC, 32-valve V-8 engine with VVT-I, sequential Multiport Fuel Injection and Electronic Throttle Control system with intelligence.

The longitudinally mounted front engine’s energy output is geared to all four wheels through an electronically controlled 6-speed sequential shift automatic transmission and Torsen® Limited Slip center differential with an electronic locking feature. Horsepower from the 4.6-liter V-8 is 301at 5,500 rpm, while the torque rating is 329 lb.-ft. at 3,500 rpm. The towing capacity is 6,500 pounds. Towing is made easier, thanks to the standard Trailer Sway Control that uses the Vehicle Stability Control to enhance straight-line tracking

The TORSEN differential distributes power 40:60 under the majority of driving conditions and changes the ratio as needed based upon wheel slip. The system offers a low range for off-road driving, and the center differential can be electronically locked. Torque vectoring enhances power distribution to wheels with the most traction.

The off-road capability begins with a low range, and it is supported by a wide array of chassis control technology. With Downhill Assist Control, Hill-start Assist Control, Active Traction Control, Vehicle Stability Control and available Crawl Control, the GX 460 is able to conquer uneven trails and steep inclines. The GX 460 comes standard with a steering angle indicator in the gauge panel, enabling the driver to see which direction the front wheels are pointing. 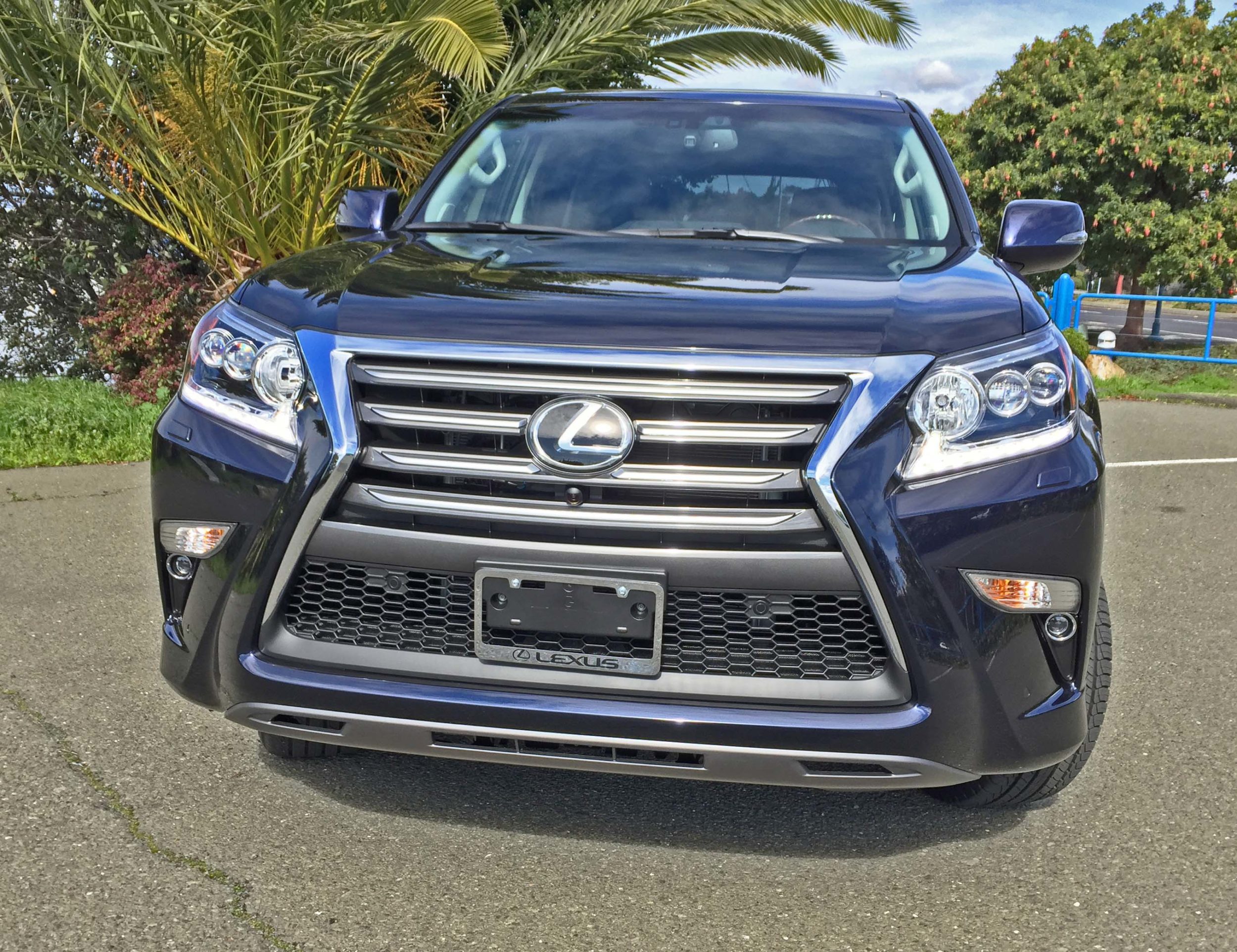 Visually, the GX 460 is humongous, but is as attractive as a full size SUV can be. It leads off with its massive chrome laden “spindle grille”, followed by a relatively flat hood with accentuating character lines that flow to the sharply angled windshield. The roof slopes almost imperceptibly to the rear where it finishes with a spoiler above the rear glass. The rear presents a broad, low stance, which is deceiving, because reaching the roof to clean is next to impossible without a ladder or stepstool. One design flaw exists from my perception – the rear gate opens horizontally, which is okay, but it is hinged on the right, and despite the telescopic damper which holds it open at any angle, it is highly impractical for the U.S. market when parallel parked, because when loading or unloading at the curb the extremely wide door blocks curb access. 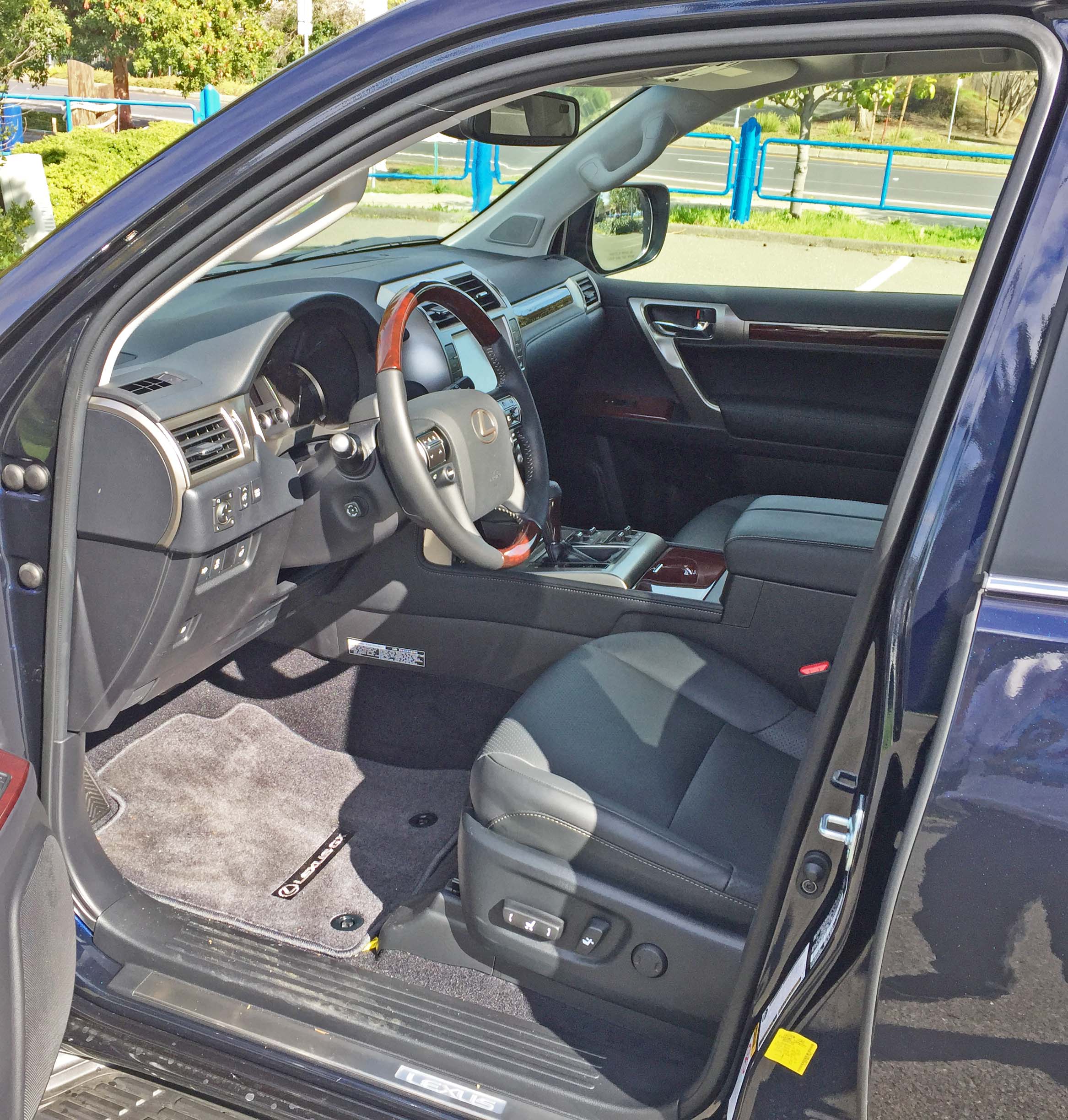 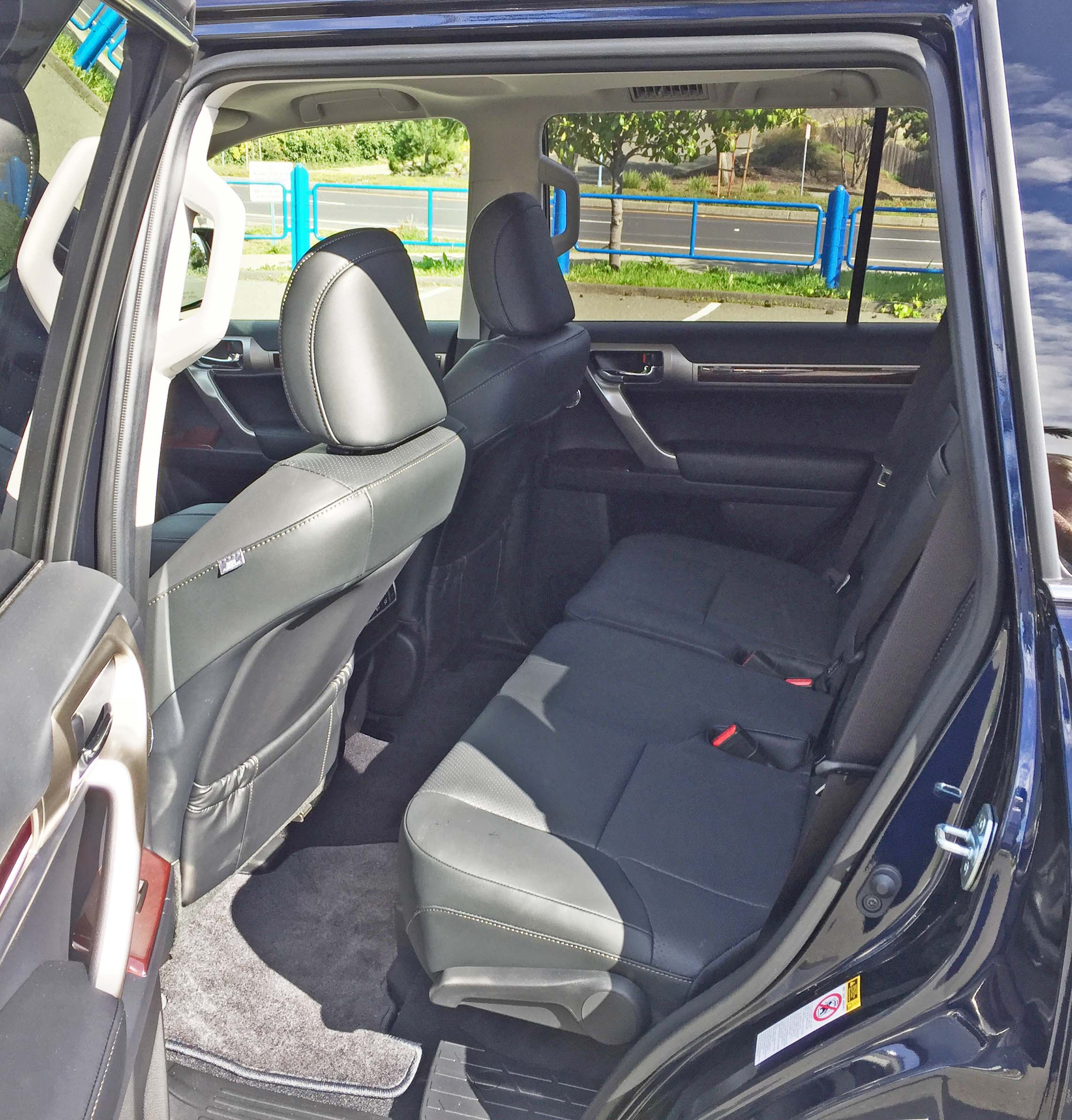 The cabin is loaded with sumptuous creature comforts and conveniences, and the fit, finish and material selection is elegant and sophisticated. Seating is for seven or eight, with the third row seats folding flat and opening at the touch of a switch. Second row seats also fold flat, but are manually operated. There is limited room behind the third row seats when occupied. Essentially, the GX 460 embodies the plush ambience found in every Lexus making it ideal for transportation to the opera or any formal affair, but it is equally at home for adventuring off-road – even the Legendary Rubicon Trail, if one doesn’t mind some scratches here and there. 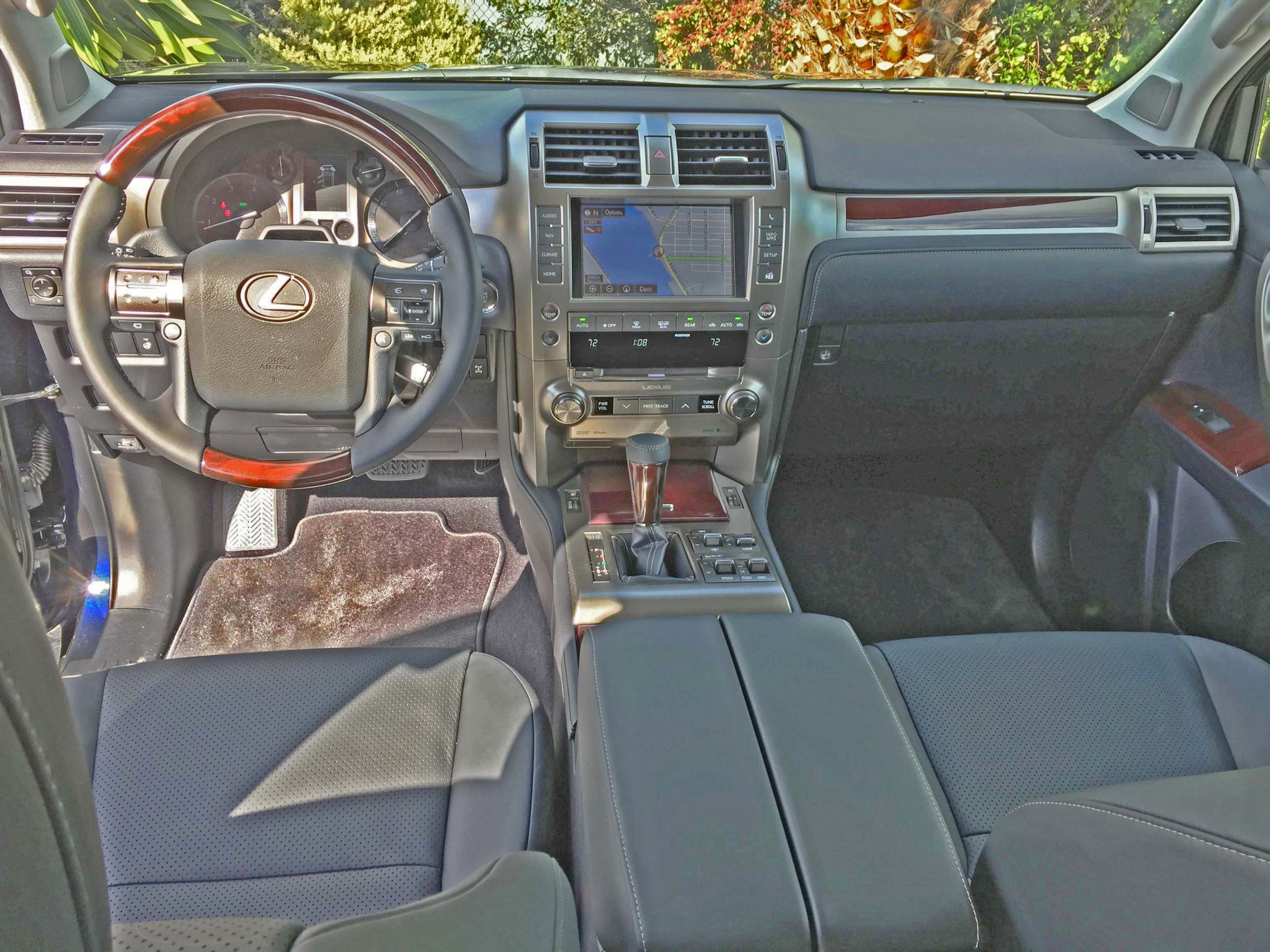 The multimedia system of the GX 460 uses a customizable home screen that can display three sections simultaneously, such as a single display (navigation/map), dual display (navigation/map + audio, compass or other function) or three displays on the same screen (navigation/map + audio + weather). The touch-screen Display Audio uses an eight-inch screen that includes a backup camera, HD Radio™, Bluetooth® audio, automatic phone book transfer, a vehicle information display and complimentary traffic and weather data provided via HD Radio. The system also incorporates cache radio, which has the ability to pause live radio. 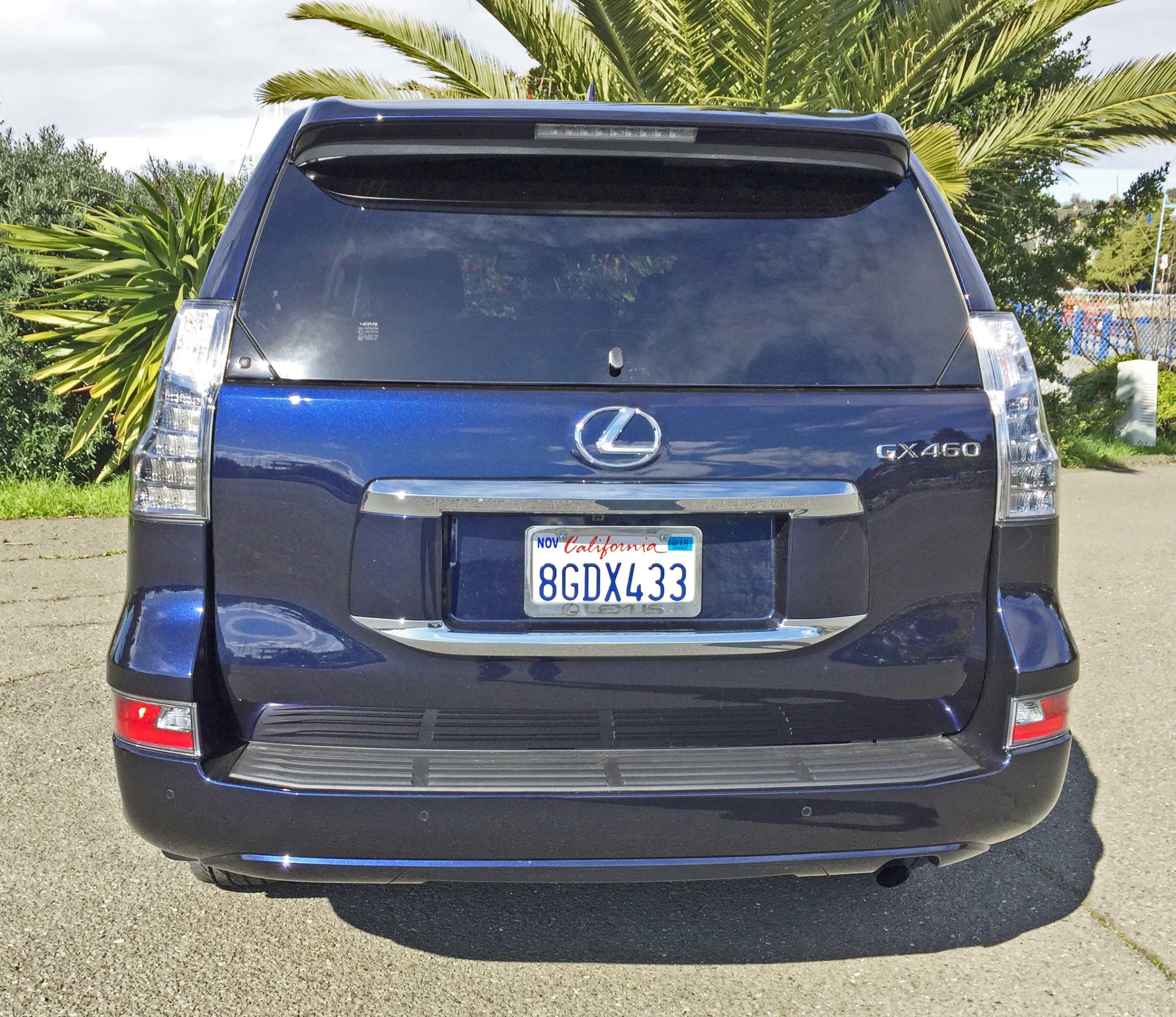 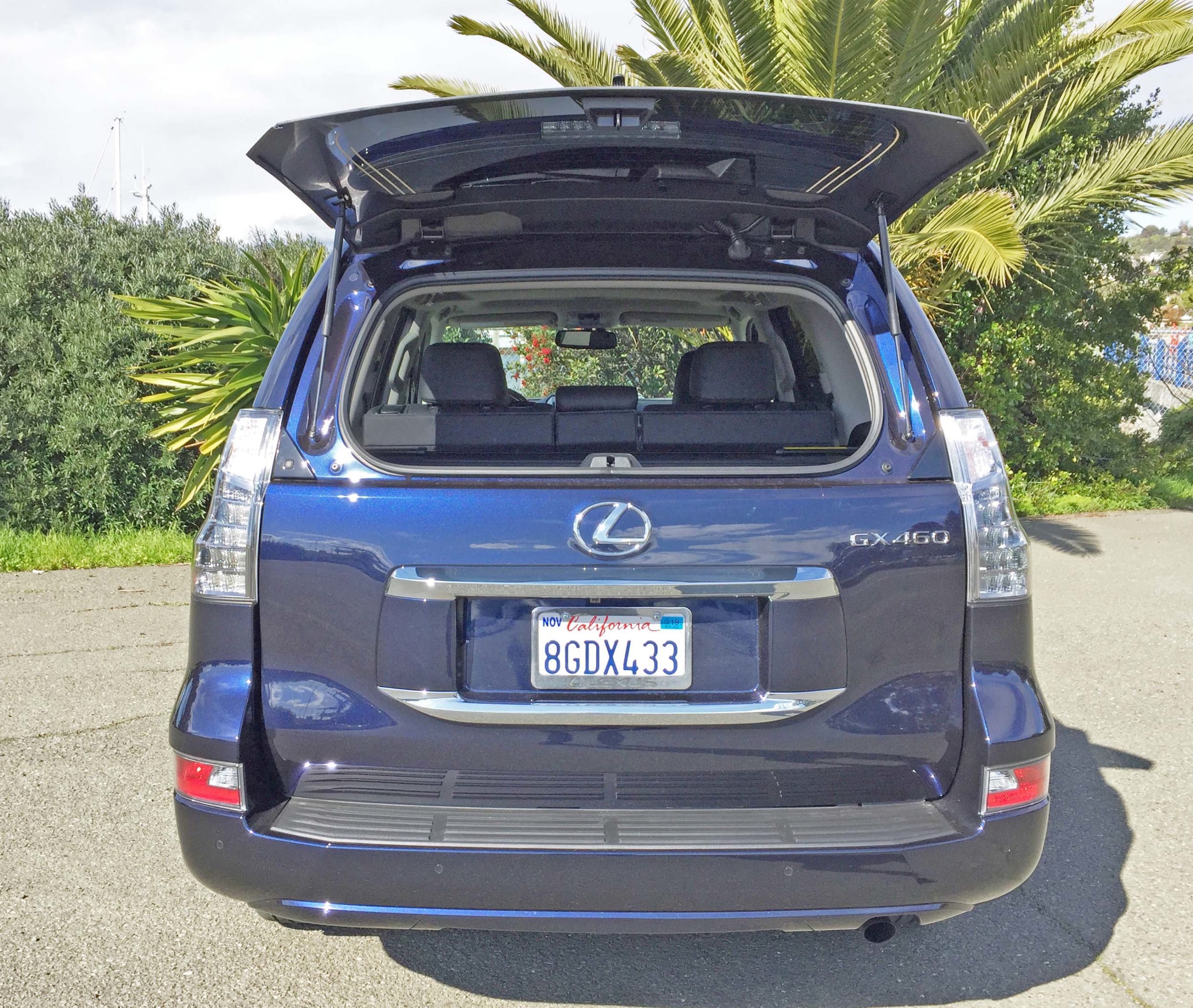 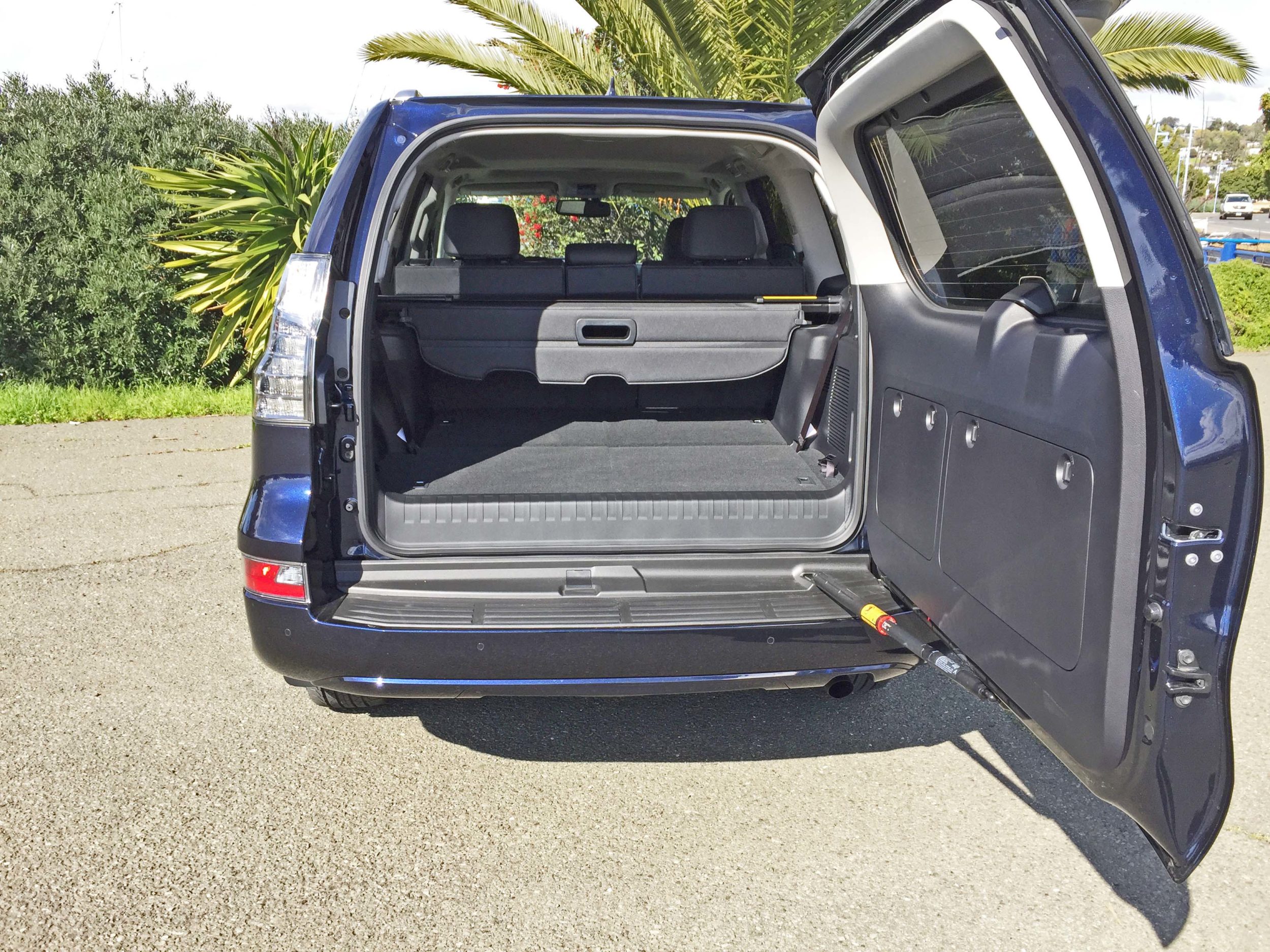 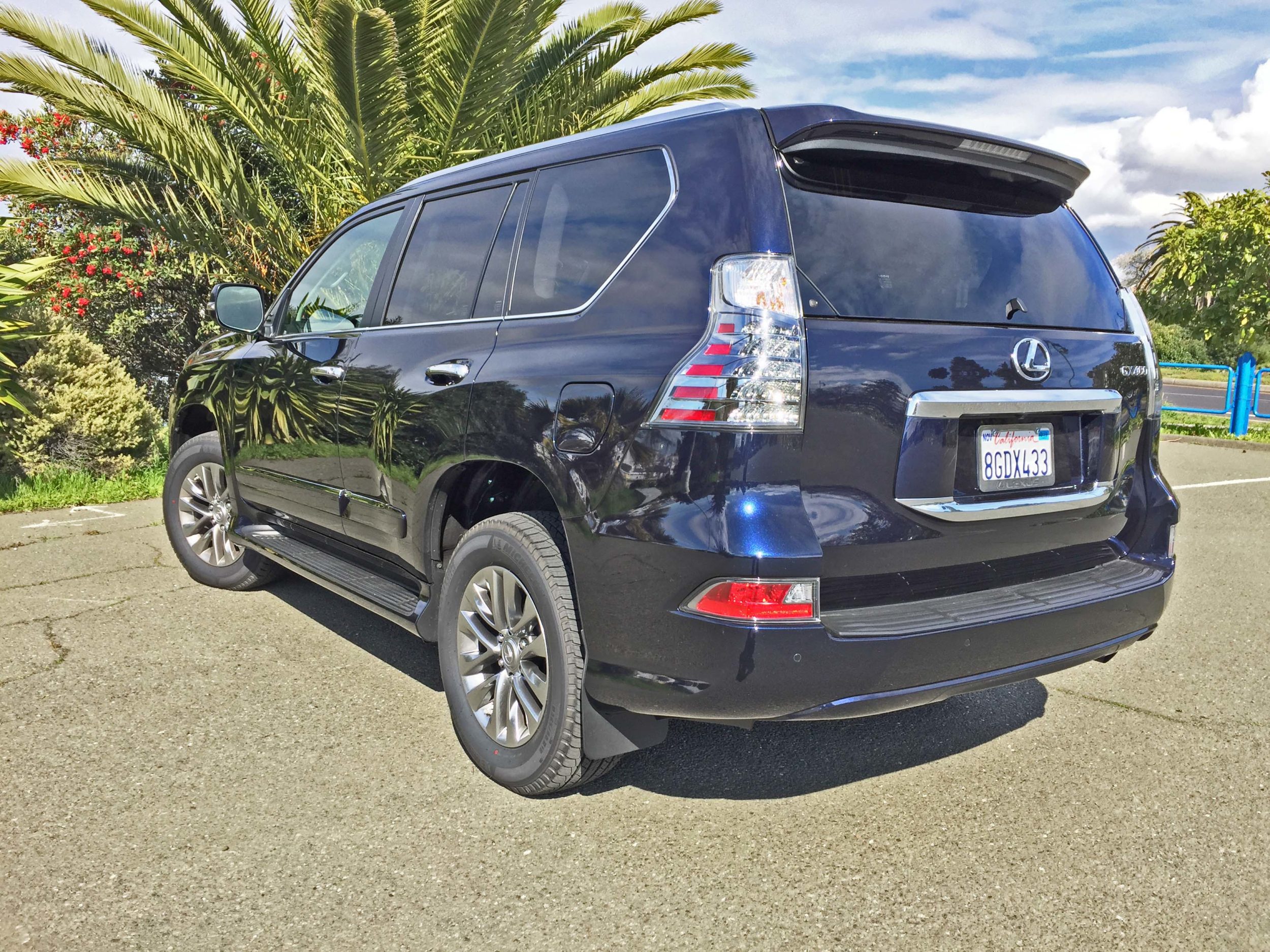 My test 2019 Lexus GX 460 was in Luxury trim, which came with a base sticker of $63,555. The final tally came to $66,920. after factoring in options and the delivery, processing and handling fee. The exterior was sprayed Nightfall Mica with the interior done in Black with Mahogany trim accents.

Except for its massive size, driving the new Lexus GX 460 Luxury is no different from driving a premium luxury sedan. The ride quality is exceptionally comfortable, thanks to the Adaptive Variable Suspension that features three modes: Normal, Sport and Comfort, and the Adjustable Height Control adds to the vehicle’s functionality and flexibility. 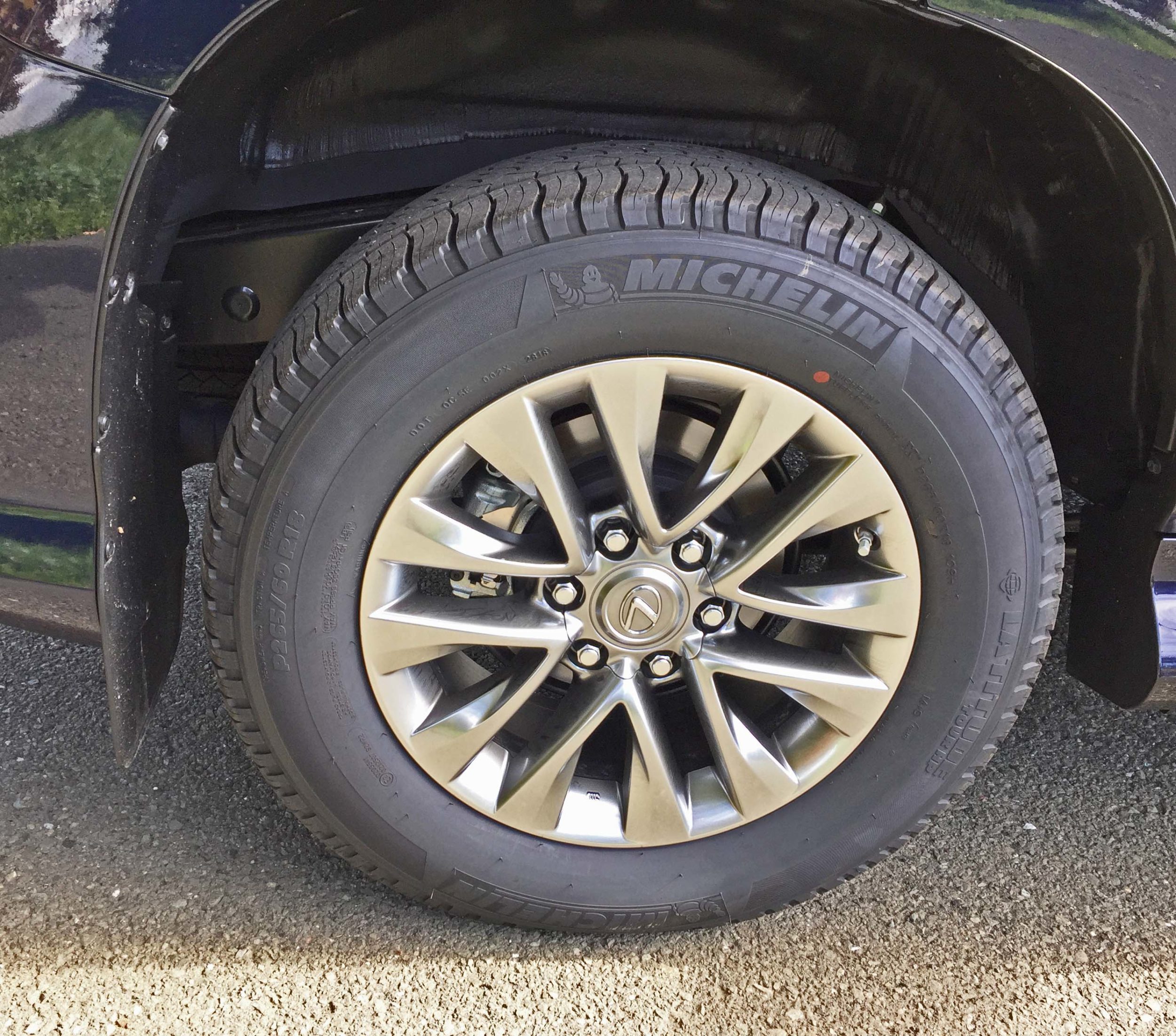 The 4.6-liter V8 delivers power in spades, but one needs to remember that bringing the more than two-ton SUV to a halt warrants a little forethought. Handling is spot on – for a vehicle with the GX’s mass, it is surprisingly light on its rolling stock.

Bottom line, the Luxury version of the 2019 Lexus GX 460 is not unreasonably priced – it certainly has more to offer in terms of accommodations and features than say, a Corvette. And, while the mileage rating is not stellar, the 48-month/50,000-mile basic limited warranty with roadside assistance for 48 months/unlimited miles and 72 months/70,000 miles powertrain and restraint system coverage along with 72 months of corrosion perforation protection coverage, regardless of mileage is pretty impressive.