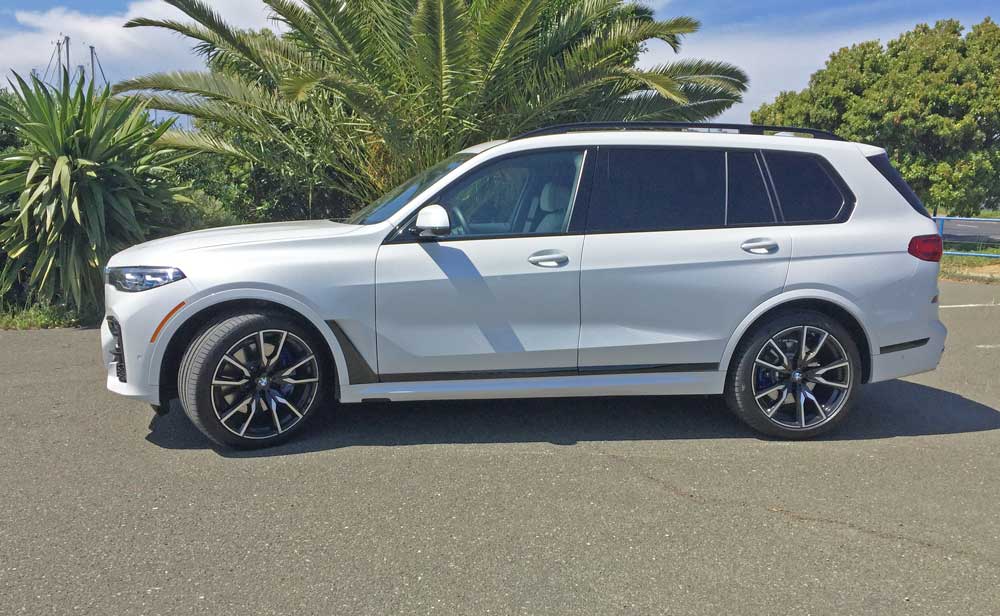 BMW has just entered the full size SUV arena with two stunning models of their first ever X7 SUV (except their term is SAV for Sports Activity Vehicle). And for the first time it will be possible to pre-order a brand new BMW vehicle online. Both X7s provide three rows of seating for up to seven passengers to travel in total comfort. Its size is similar to that of Audi’s Q7 and the GLS from Mercedes-Benz.

The X7 50i xDrive rides on a full air suspension capable of lowering the vehicle for ease of loading passengers and cargo. The X7’s double-wishbone front suspension and five-link rear setup are largely borrowed from the X5. Dynamic dampers allow dialing in either a softer or firmer ride.

The X7 may be ordered with a system tying the air suspension into forward-looking cameras that monitor the road ahead adjusting suspension parameters in advance of the SUV encountering road imperfections. The system pairs with a package that includes active rear-wheel steering and brakes tuned by BMW’s M division. For V-8 powered models, the package also adds a sport rear differential. There’s even an available off-road package. 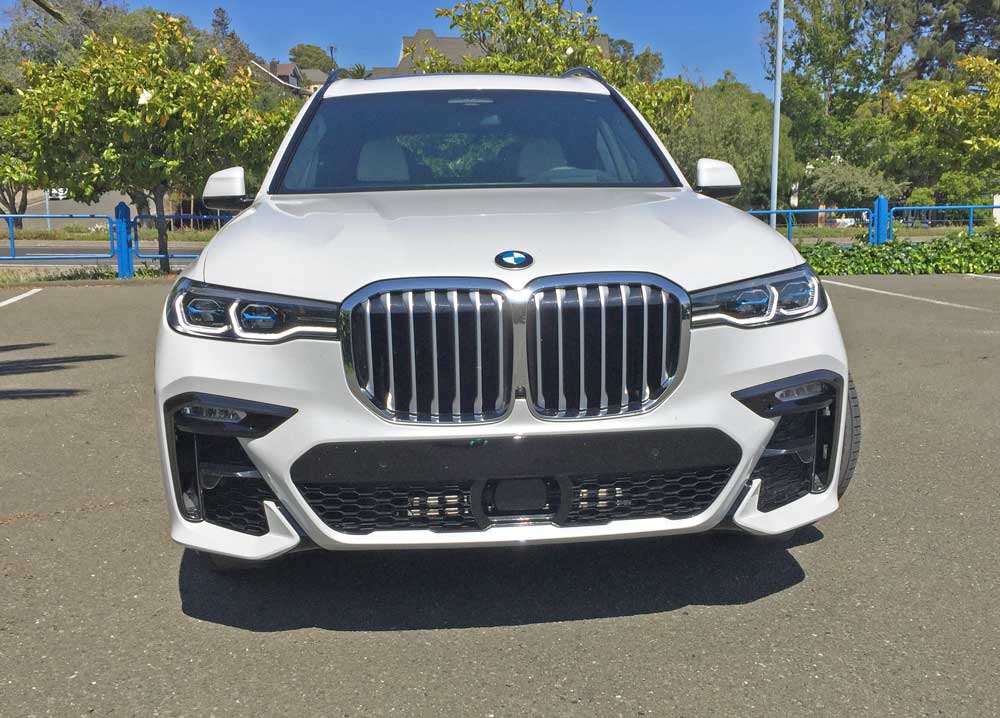 In terms of its exterior design, the BMW X7 does little to step outside the SUV norm, which is just fine for the first foray into the realm of three row SUVs. The styling is basically clean and simple, leading off with a bold enlarged twin grille that dominates the nose along with large lower and side air intakes, and wearing BMW’s iconic Hoffmeister kink at the rear of the cabin greenhouse. The front and rear overhangs are abbreviated and somewhat blunt on both ends. In profile, there is a demonstrative rising character line defining the shoulder line and just above a cove effect between the pronounced wheel wells. The cabin arches slightly aft., and the rear view displays a broad authoritative stance. 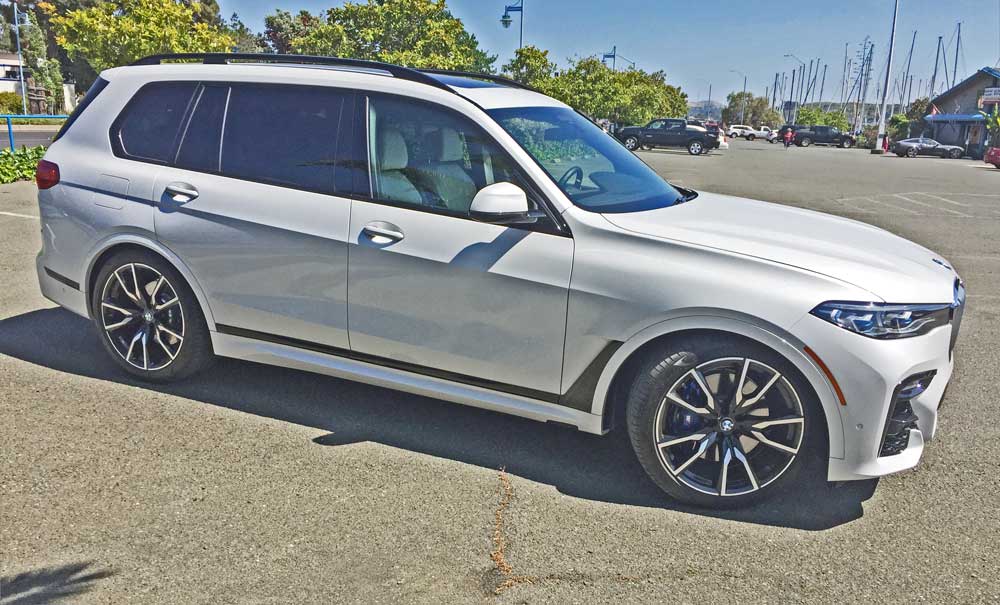 Interior-wise is where the all-new X7 really shines, which is where it counts most. It may well be rated as the plushest of the plush. Dash touchscreens and digital displays reside where gauges might otherwise be placed. 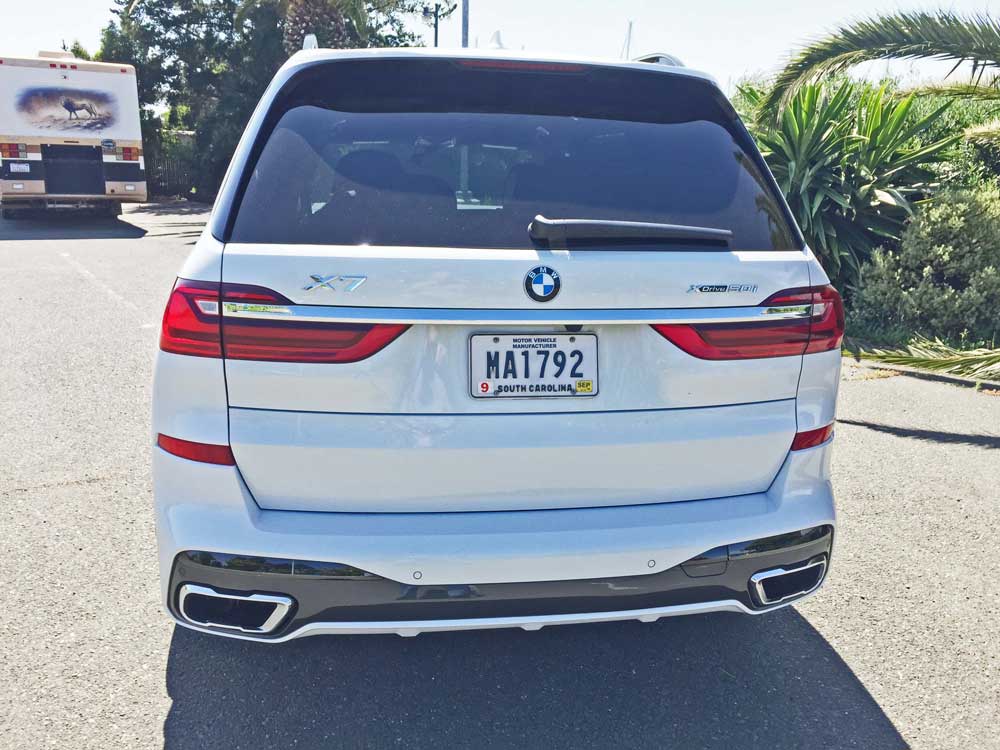 BMW groups controls in metallic framed horizontal trim bands for a futuristic look that adds an elegant touch to the cockpit. Further enhancing the upscale ambience of the interior is the crystal-like iDrive controller and shift levers, open-pore gray wood, and a leather-topped dash. 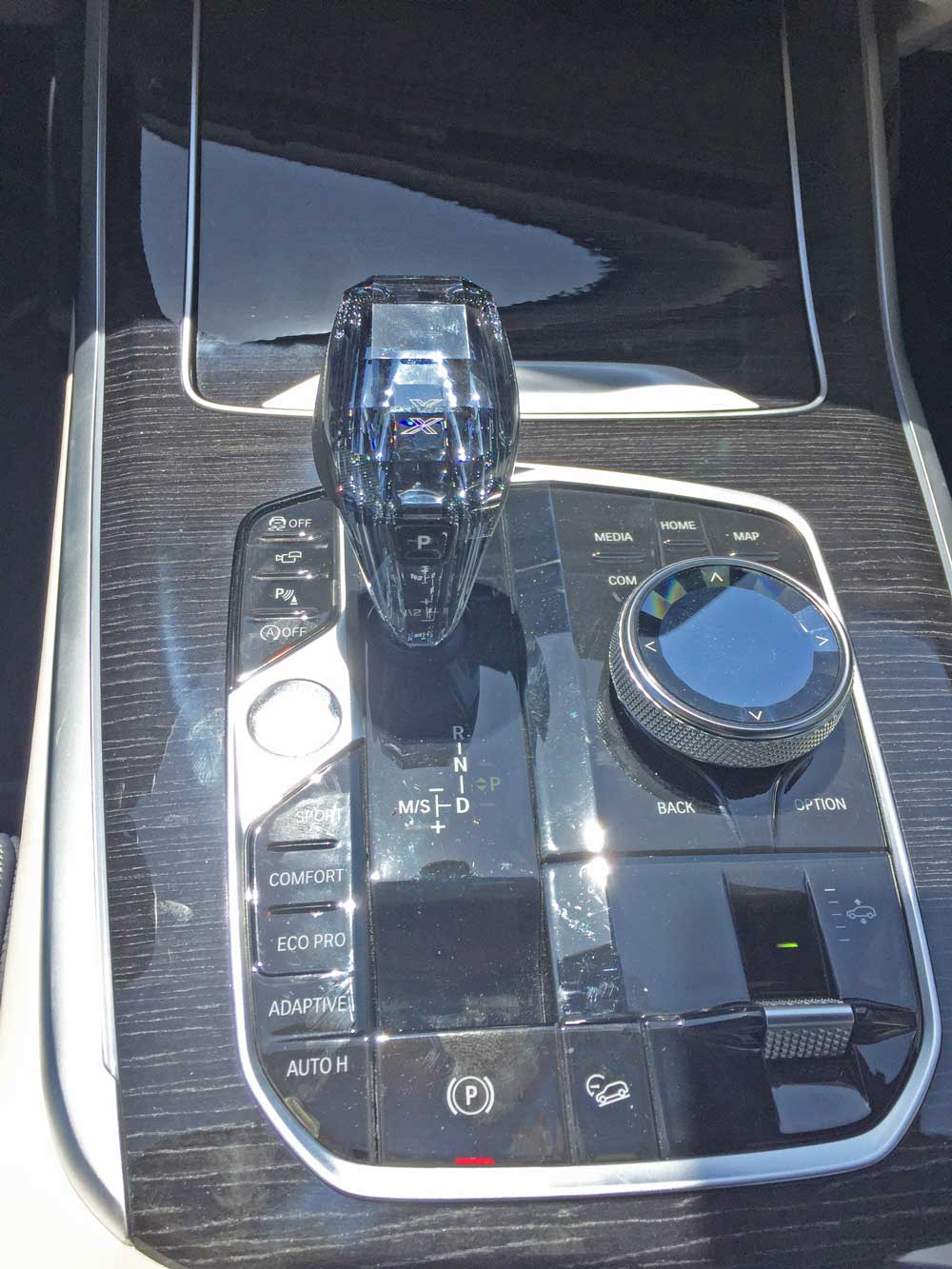 The X7 comes standard with three rows of seats and seating for seven. A package is available that trades out the second row bench for dual captain’s chairs. There’s plenty of space and its use is ideal. 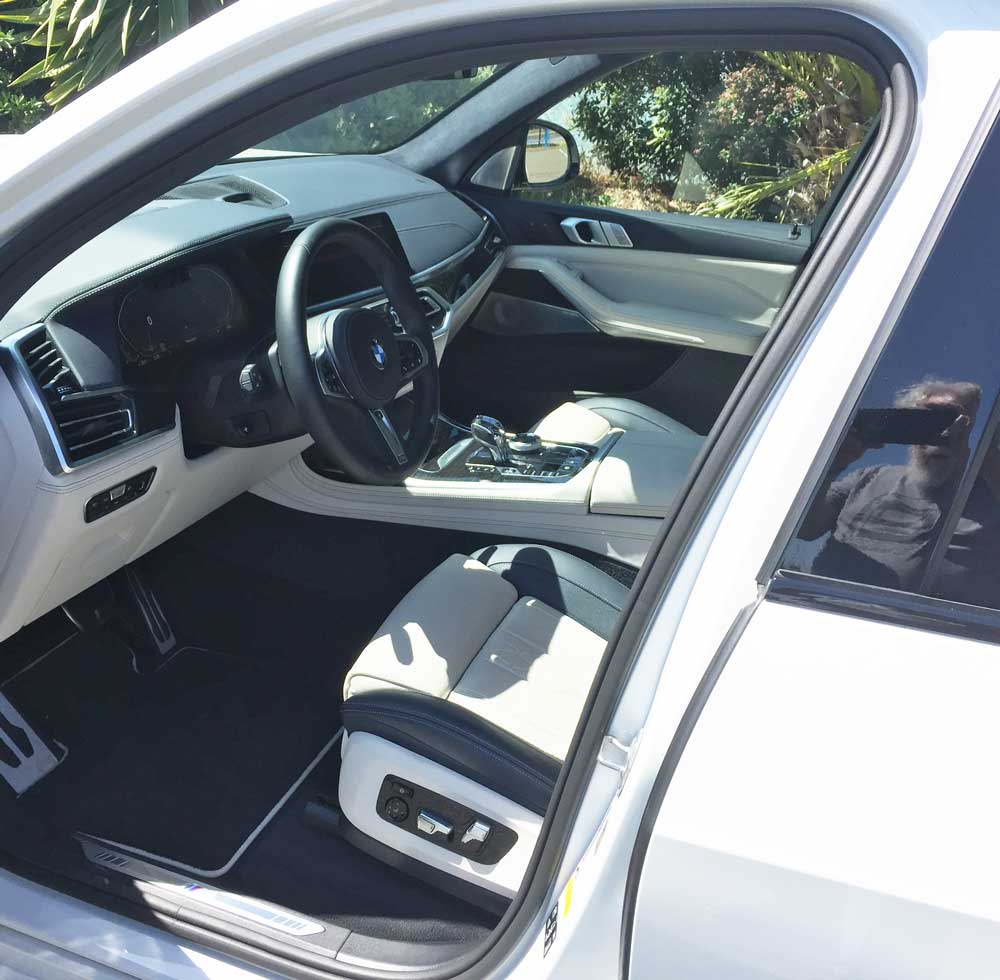 Infotainment and connectivity are paramount in the X7. Housing the infotainment features is a pair of 12.3-inch screens. One appears in the instrument cluster and is configurable, handling basic info, while the other is a touchscreen for actual infotainment. BMW includes navigation and Apple CarPlay as standard, with the latter requiring an $80 per year subscription after the first year. The X7’s infotainment system will respond to voice commands following, “Hey BMW” prompt —or any other name it’s programmed to understand. 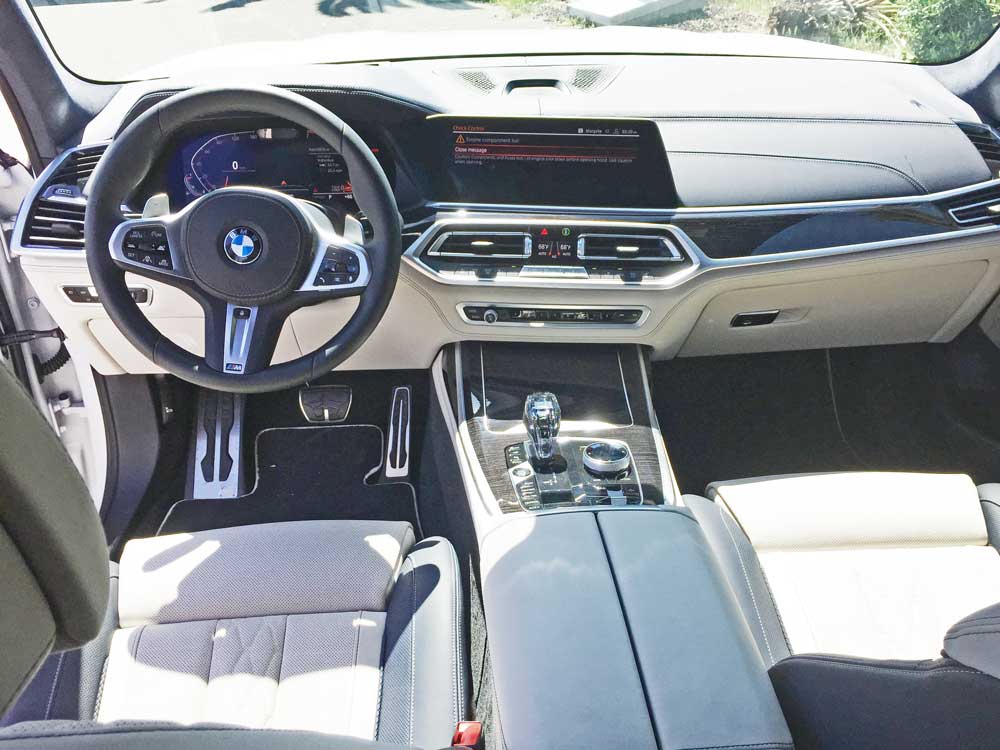 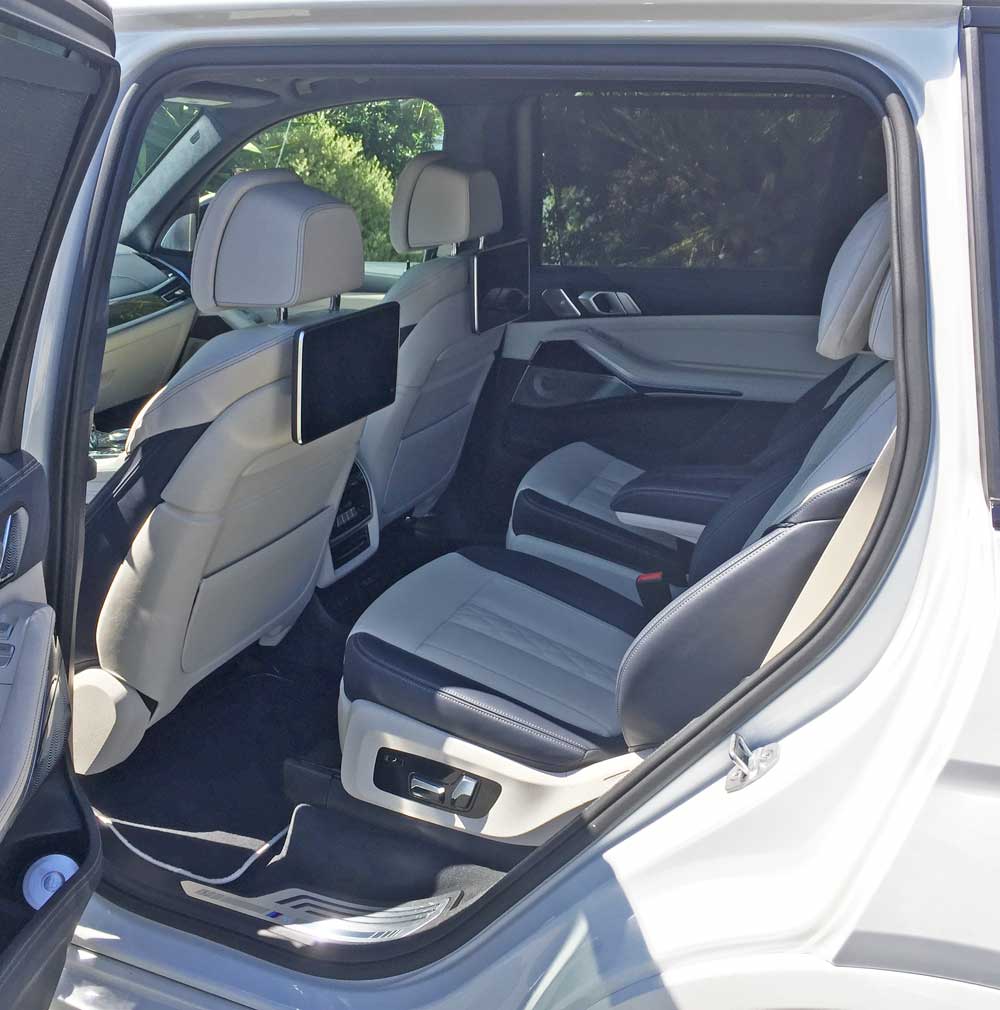 Second-row seats tilt forward for easier access to the third-row. The X7’s third-row seat is actually usable – a little tight for 6-plus footers, but roomy enough for average folks and passengers have their own armrests, cupholders and charge ports.

There’s not a great deal of cargo space behind the third-row seat the X7 doesn’t only 11.5 cubic feet, less than that of most compact sedans. Behind the second row, there’s 48.6 cubic feet of space, and behind the front seats, some 90.4 cubic feet. 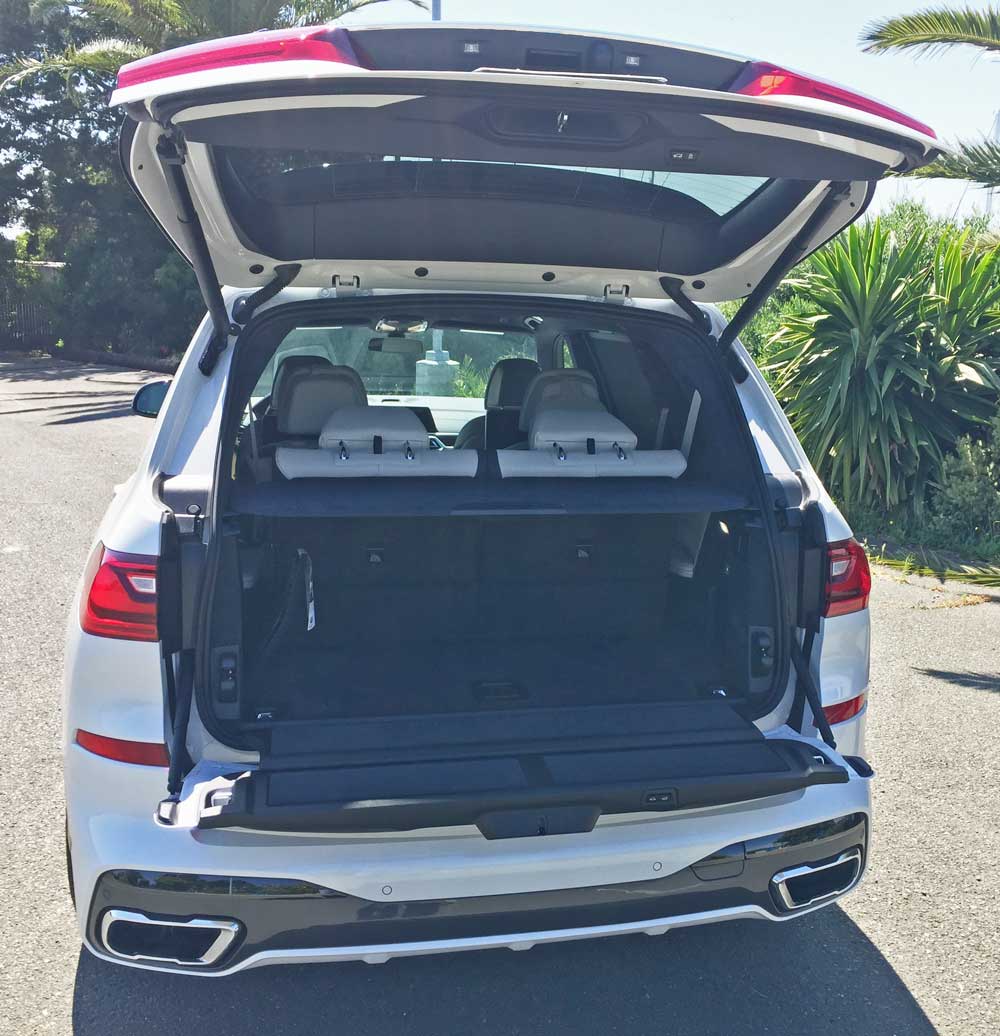 A power-split tailgate that raises the top three-quarters and drops the lower quarter panel is ideal for spur-of-the-moment tailgate affairs.

The X7 50i’s twin-turbocharged, 4.4-liter V-8 cranks out 456 hp while generating 479 lb-ft of torque. BMW calculates its 0-60 mph time at 5.2 seconds, with a top speed of 130 mph. Pretty impressive condsidering its mass that’s just shy of three tons. It’s engine is a delight, with its deep V-8 rumble as one prods it with spirit. The 8-speed automatic delivers clean quick shifts, both uo and down. The all-wheel-drive system’s sport differential uses an electric motor to vary power across the rear axle, adding more traction while it also assisting in piloting a tighter line through challenging “twisties”. 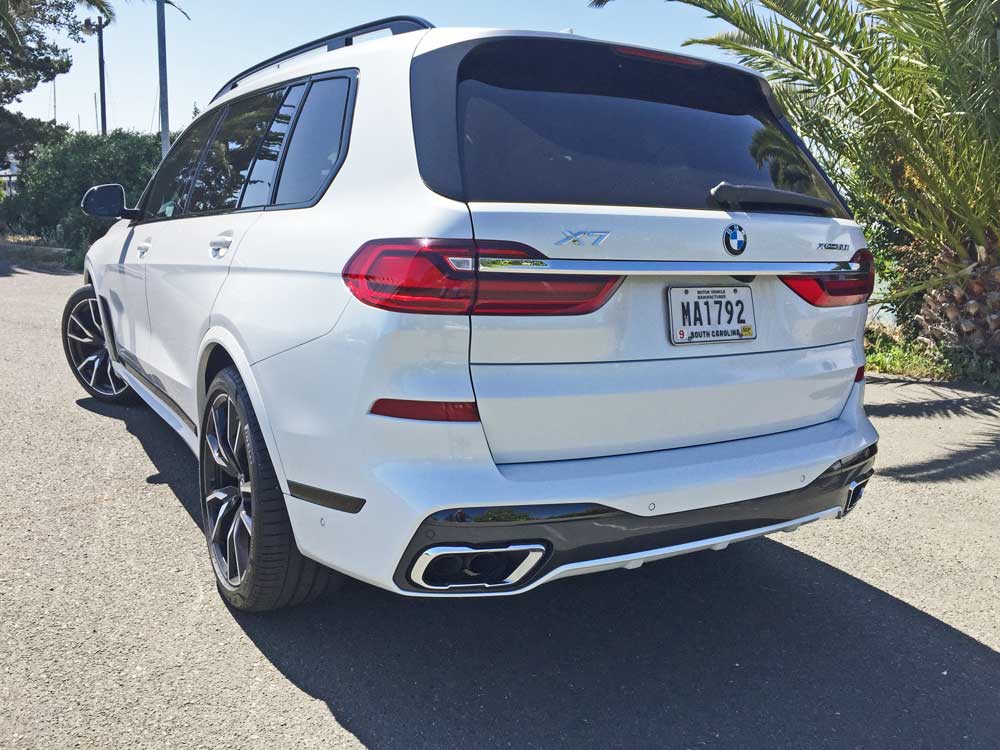 It not likely that the X7 will stray far from paved surfaces, but there’s an off-road package available featuring specific off-road drive modes (for snow, gravel, mud, etc), that can raise it up to a maximum of 8.7 inches of ground clearance, or elevate wheels for easier tire changes. 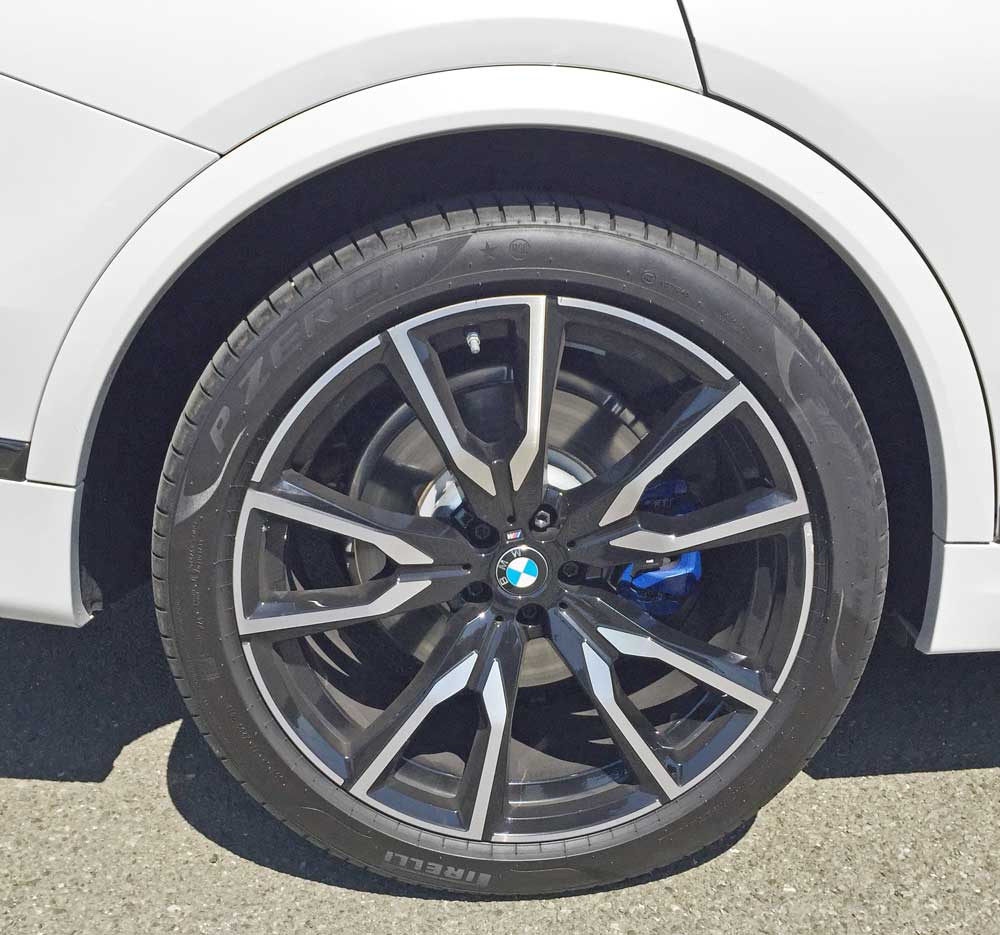 All X7s come with a host of the latest in technology and safety equipment features, and the X7 can even self-park in either parallel or perpendicular spaces. Behind the third-row seat the X7 doesn’t have much cargo space—just 11.5 cubic feet, less than a compact sedan. Behind row two, it has 48.6 cubic feet of room, and behind the front seats, some 90.4 cubic feet. There’s a power-split tailgate that raises its top three-quarters and drops its lower quarter panel to accommodate spur-of-the-moment tailgate affairs.

The 2019 BMW X7 xDrive 50i SAV is one super fine vehicle that many would rank above a top level Range Rover in terms of luxuriousness and sumptuous elegance if not all out off road capability. Yes it’s expensive, but aren’t you worth it?

Suspension: Full air suspension that can lower the vehicle for easier passenger and cargo loading. Dynamic dampers allow the driver to select either a softer or firmer ride at the tap of a button.
Front – double-wishbone.
Rear – five-link. 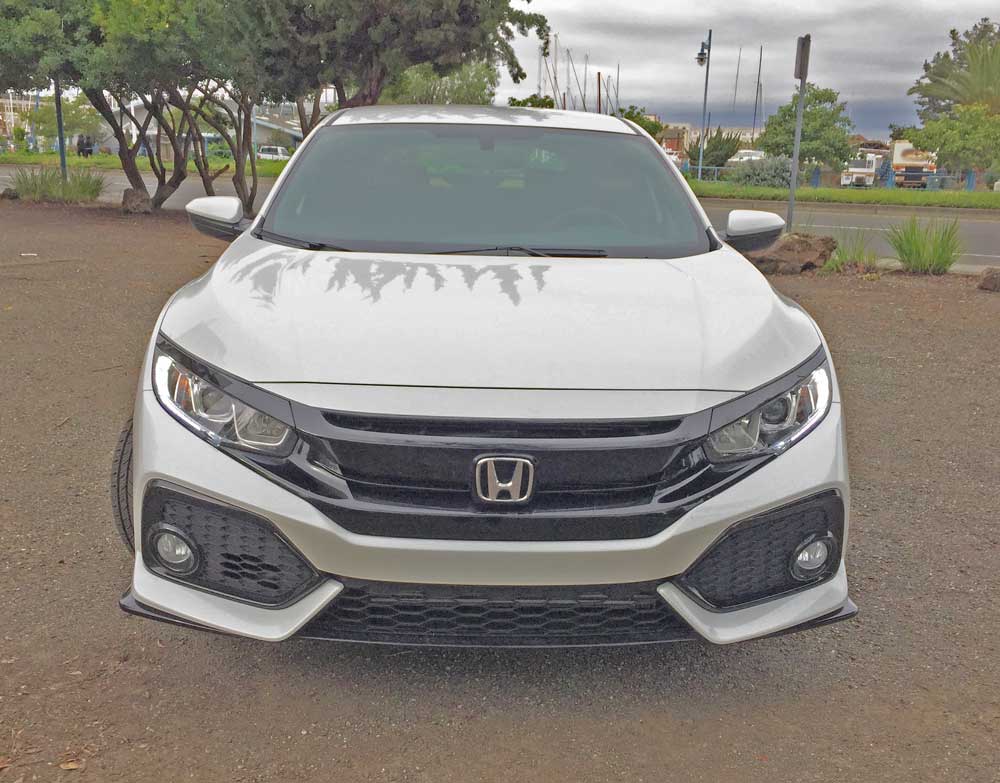 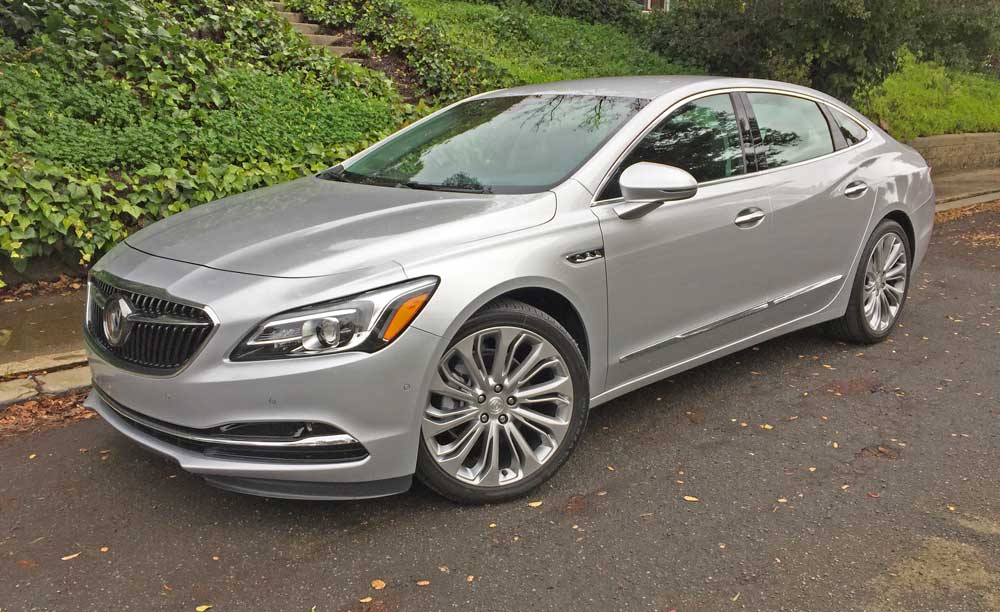