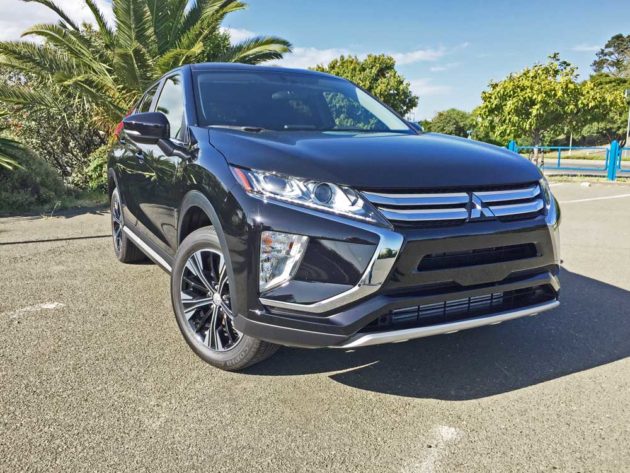 What is a Mitsubishi Eclipse Cross? For those who may not remember, the Mitsubishi Eclipse was a pretty well thought of compact sports car that was built through a joint venture, which was formed between Mitsubishi Motors and the Chrysler Corporation. Four generations of the Eclipse were produced from 1989 to 2011. It was originally only a two-door liftback coupe body style until a two-door convertible was added to the lineup In 1996. The joint venture was known as Diamond Star Motors and vehicles were produced in a plant in central Illinois and were sold under Mitsubishi, Chrysler, Dodge, and Eagle and Plymouth brand names. 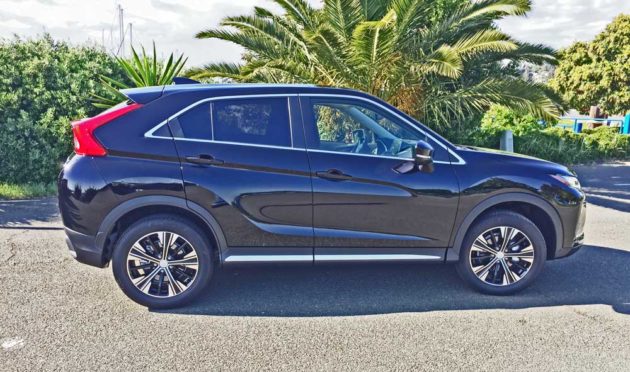 Contrary to the concept of paying homage to brand equity, Mitsubishi, who no longer has anything to do with what was Chrysler (which has now become FCA for Fiat, Chrysler automobiles) decided to add another model to their product line ? the all-new 2018 Mitsubishi Eclipse Cross, a small Crossover or SUV that falls nicely between their larger Outlander and smaller Outlander Sport SUVs which both come in a base and LE trim level. The Outlander also has a PHEV model and two sedan models ? the Mirage and Mirage G4. It appears that last year?s larger Lancer sedan?s represented the end of its production. Mitsubishi?s latest association is with Renault/Nissan. 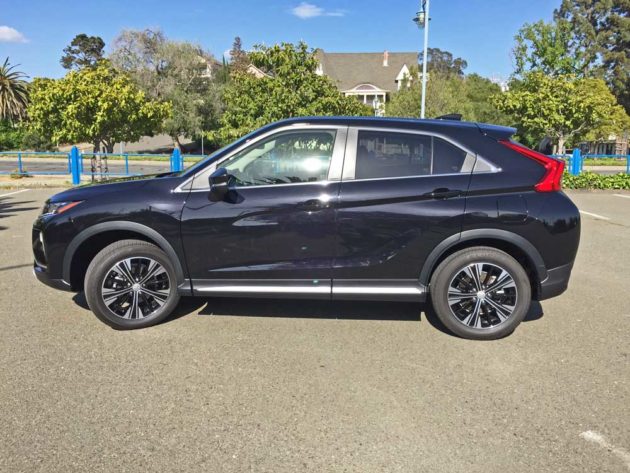 By no means a compact sport liftback, the Mitsubishi Eclipse Cross is an all-new, aggressively styled and sporty appearing five passenger Crossover that is available in four levels of trim: a base ES 1.5T FWD; an LE 1.5T S-AWC; an SE 1.5T S-AWC and the top-of-the-line SEL 1.5T S-AWC. There?s also a special Limited Edition model. All are powered by a transversely front mounted 1.5-liter L4 MIVEC DOHC, 16-valve, inline four-cylinder turbocharged engine with Direct Injection that produces 152 horsepower and 184 pound feet of torque. Energy is transmitted to either the front wheels, in the case of the ES model, or to all four with Super-All Wheel Control (S-AWC) in all other trims via an 8-speed CVT with a Sport mode and paddle shifters. All models have Electric Power Steering, and the towing capacity for all trim levels is 1,500 pounds. 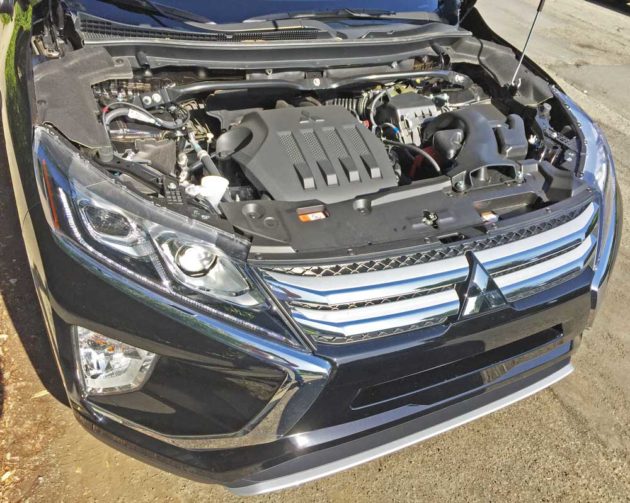 The overall design displays a more aggressive and youthful image than the rest of the Mitsubishi family, with sharply angled and sculpted lines. Forward is a two bar upper bright grille that connects to the upswept, wrap-around headlamps. Uniquely outward-angled bright trim pieces bracket the directional and fog lamps,
flanking two lower, dark grille panels separated by a body-colored finish

piece just above a bottom metal finishing diffuser. In profile, the wheel wells are pronounced and connected by an upswept, sculpted character line with a chiseled cutline just below the rising shoulder. The greenhouse ?B? and ?C? pillars are blacked out and surrounded by bright trim rendering a coupe-like effect. 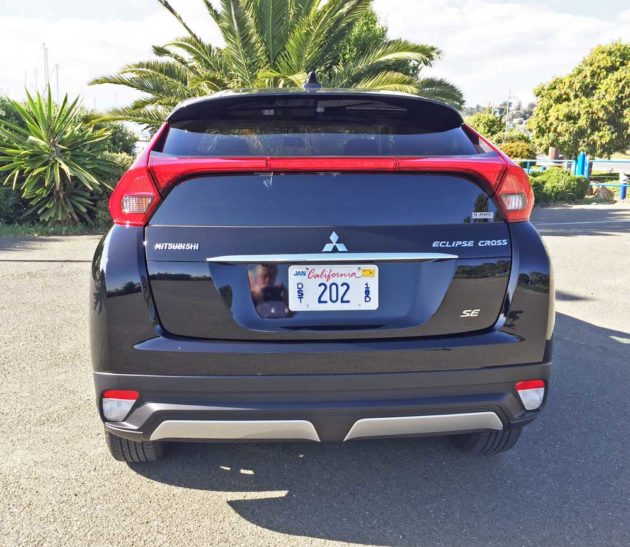 The aft end showcases a wide stance, tapered from top to bottom, with an integrated spoiler atop the gate and a split rear window with a light bar connector to the taillamps. Metallic inserts are fitted into a Black lower diffuser with dual integrated exhaust outlets. 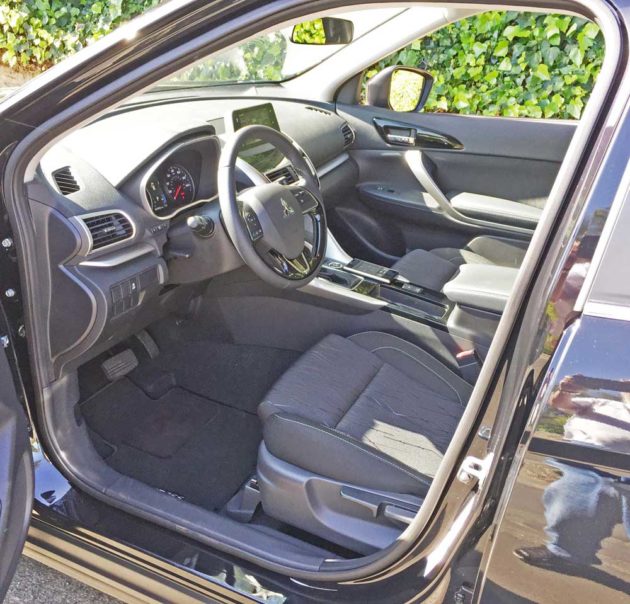 Entering the Eclipse Cross?s cabin, the IP features a split cockpit effect with user friendly switchgear and controls with tasteful brightwork trim accents. Upper trim models come with a head-up display that disappears when not in use, and the infotainment system in all but the base ES includes a 7.0-inch display that sits atop the dash in tablet-like form, supporting both Apple CarPlay and Android Auto which is readily intuitive. The touchpad control in the center console on the other hand takes some getting used to. 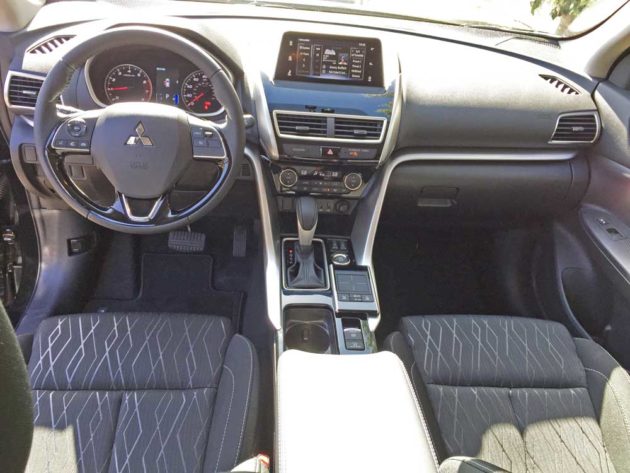 My test 2018 Mitsubishi Eclipse Cross was in SE trim and sported a Tarmac Black metallic exterior finish and a patterned Black cloth interior with white contrasting stitching and Piano Black trim accent elements above a bottom metal finishing diffuser. In profile, the wheel wells are pronounced and connected by an upswept, sculpted character line with a chiseled cutline just below the rising shoulder. The greenhouse ?B? and ?C? pillars are blacked out and surrounded by bright trim rendering a coupe-like effect. 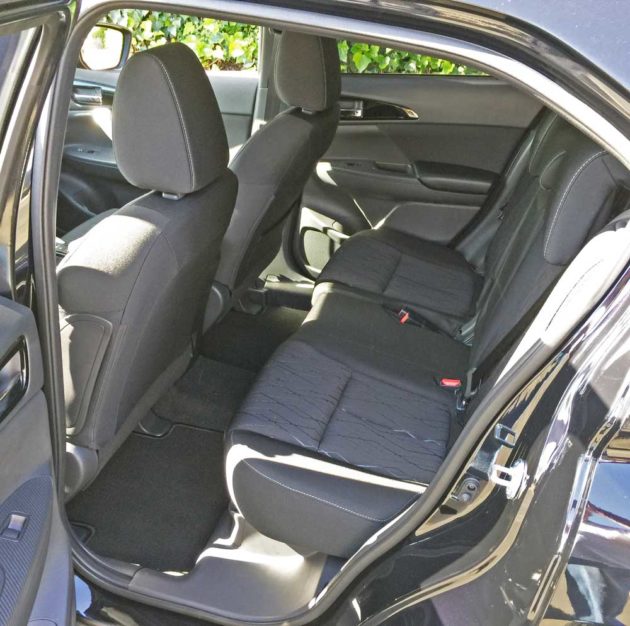 My test 2018 Mitsubishi Eclipse Cross was in SE trim sporting a Tarmac Black metallic exterior finish and a patterned Black cloth interior with white contrasting stitching and Piano Black trim accent elements. The base price was set at $26,395. With the accessory tonneau cover, carpeted floor mats and portfolio and the Destination and Handling charge bumping the final tally to $27,715.

SUMMARY: There will be those who will no doubt question the need for the existence of the new Mitsubishi Eclipse Cross as well as the choice its moniker, but when push comes to shove, it actually fills a niche in the model lineup, and does it quite nicely.

The engine delivers smooth acceleration, which comes on readily without strain, with the sweet spot settling in around 2,500 rpms. The CVT allows selecting one of 8 preset gear ratios for a somewhat old school gear changing experience. An ECO button limits acceleration resulting in improved driving efficiency.
/> 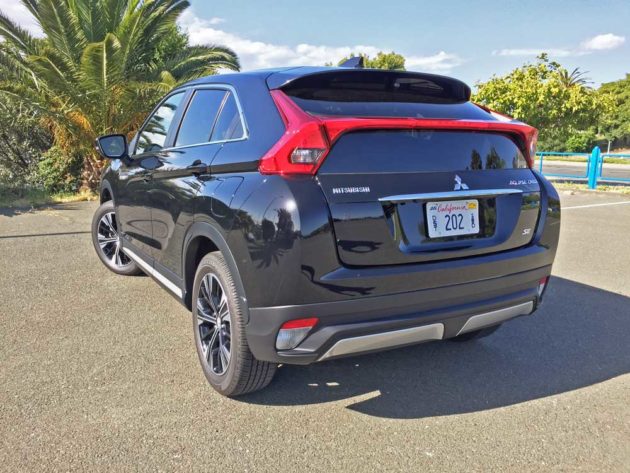 Steering is both responsive and precise for controlled and stable tracking and the S-AWC?s stability-control systems feature Gravel and Snow modes along with 8.5-inches of ground clearance.

Ride quality is satisfactory, but don’t expect the sports car-like road-holding ability of the Eclipse?s now defunct namesake coupe. The Eclipse Cross borders on sporty, but most of its sportiness is in its looks. 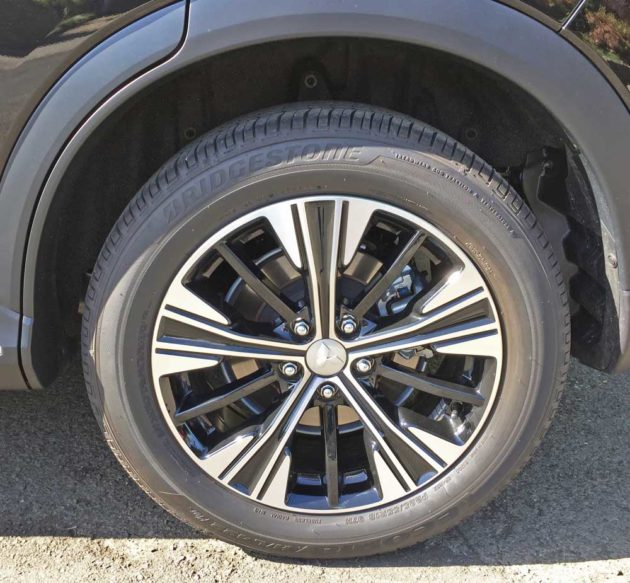 Functionality is asset of the Eclipse Cross, as it provides seating space for five and cargo-carrying practicality. Its 60/40 split-folding rear seat can slide up and back with roughly eight inches of travel to adjust space between rear legroom and luggage space, and the rear seatback?s rake is adjustable. There?s adequate rear headroom for two adults, but with three, it can be on the cramped side.

In the final scheme of things, the 2018 Mitsubishi Eclipse Cross is a likeable crossover that fills the role of Mama Bear quite nicely.