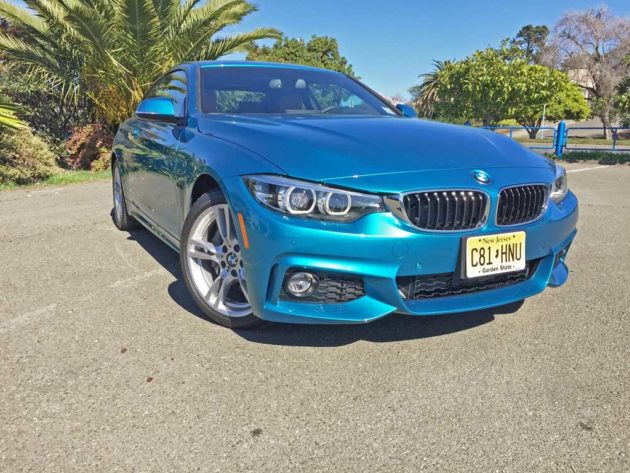 The BMW 4-Series Coupe lineup has a lot to offer. If you’d rather enjoy the fresh air through your hair, you can opt for a 4-Series Convertible. The 2018 BMW Coupe is available seven ways: the BMW 430i Coupe with either a manual gearbox or 8-speed automatic in RWD configuration; the BMW 430i xDrive with only the automatic; a BMW 440i available with both manual and automatic gearboxes; and the BMW 440i xDrive which is also available with both transmissions. BMW?s xDrive not only improves traction, but also serves to reduce understeer and oversteer through bends, resulting in more dynamic cornering control. There are actually three distinct variations in body style, marking the beginning of a new BMW era. There?s the Coupe, Convertible, and Gran Coupe. 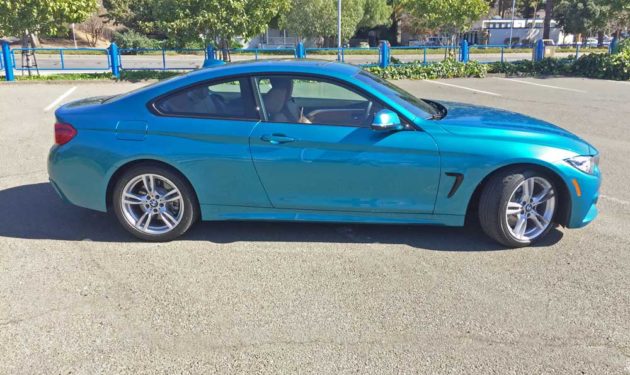 The first BMW 4-Series Coupe, built at the BMW Group Plant in Munich, was launched in September of 2013.

Visually, this latest iteration of 4-Series Coupes displays extra portions of Dynamicism, elegance and exclusiveness over the lineup of BMW 3-Series models. The wheelbase is longer and the stance is notably wider, exhibiting a low, aerodynamic profile with elongated sporty lines, short overhangs, a long hood and rear-set passenger compartment with a flowing roofline. Several styling cues came from BMW?s 2012 Concept Coupe, in evidence by elements such as the hexagonally shaped full-LED headlights, large air intake with expressive bars and full-LED rear lights. The restyled nose expresses the model range?s dynamic overall persona. Crisp contours alternate with expansive surfaces creating a broad, sharply contoured front end of three-dimensional athleticism. A defining feature up front is the unbroken central air intake that increases in size towards its outer edges, lending a more imposing presence and greater sense of width. 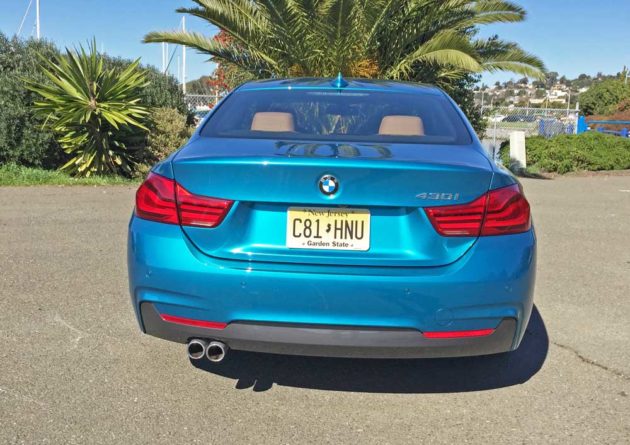 Moving aft, bold horizontal lines and the linear design of the rear light clusters draw attention to the muscular wheel arches. The widest point of the body is level with the rear wheels, while the new rear apron accentuates an impression of power. A crisp contour line mirrors the outline of the outer air intakes at the front of the car, integrating it into the overall design language. 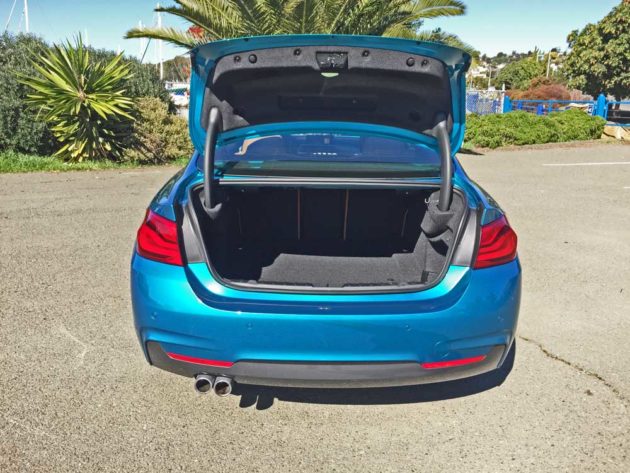 Entering the cabin, the interior features an array of upgraded details adding to the high-quality feel. The air outlets, the control panels in the doors, and the integral belt guides for its front seats now include electroplated finishes. The center console features high-gloss black cover panel, while double stitching on the instrument panel highlights the interior?s driver-focused geometry. The sports steering wheel is standard and features a new rim wrapped in high-quality leather offering a better grip. A total of three new upholstery colors complete with coordinated contrast stitching and piping may now be ordered, and new choices for the interior trim strips include Carbon Aluminum. Personal mobility is manageable through BMW Connected, designed as a digital assistant in the form of an app. 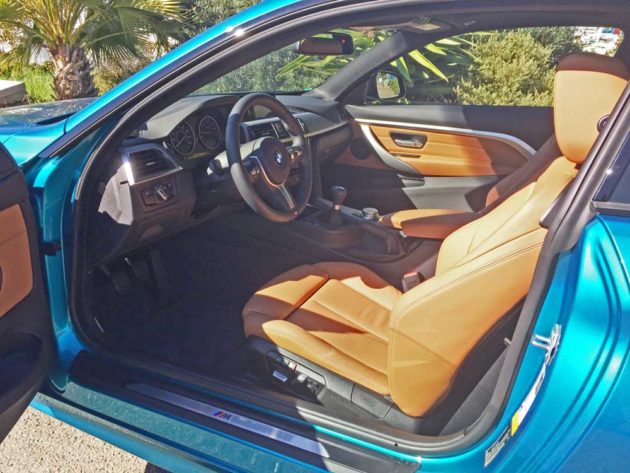 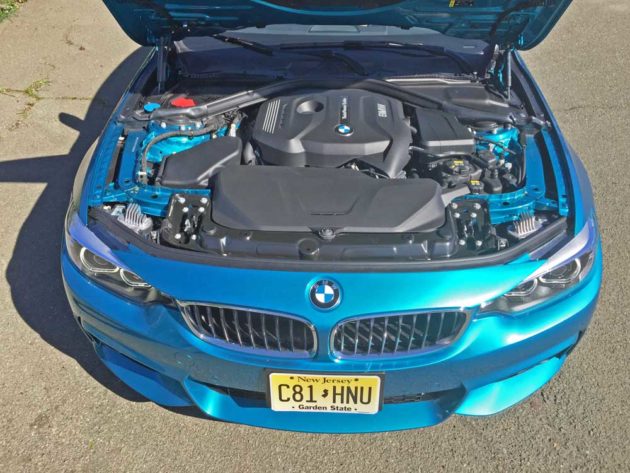 BMW engineers greatly enhanced the cars? dynamic handling capabilities by revising the suspension, which is now stiffer and features a more advanced damping technology and an upgraded steering set-up with improvement in both lateral and longitudinal handling characteristics. As a result, body roll is reduced while vehicle stability is increased. 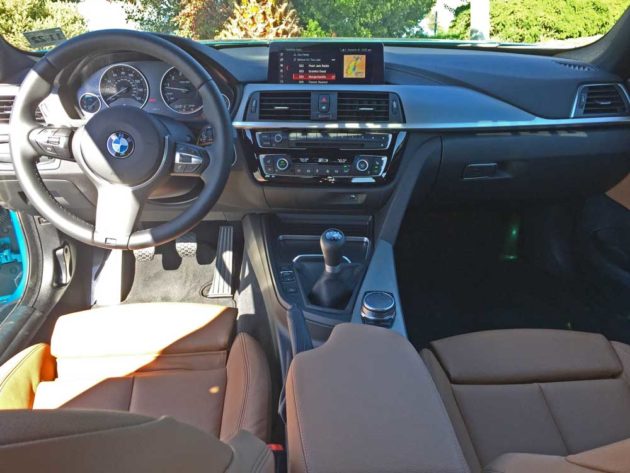 My test BMW 4- Series Coupe was a 430i with the six-speed manual transmission. It came with the exterior finished in one of the two new available colors ? Snapper Rocks Blue metallic (actually more of a Turquoise tone). The interior was executed in Cognac leather with Dark Brown highlights and Satin Silver trim accents. The base sticker was set at $43,300., which rose to a final total of $52,695. After adding for the Snapper Rocks Blue metallic paint and Cognac leather interior; the Essentials Package, Premium Package, M Sport Package; Apple Car Play; Wireless Charging and Destination charge. 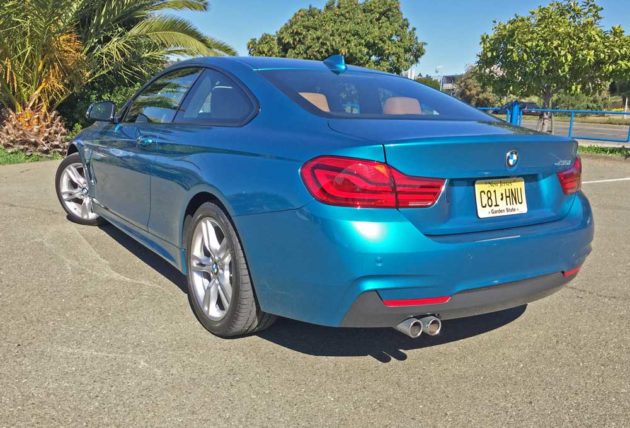 SUMMARY: The 2018 BMW 430i Coupe not only presents a beautifully designed visual form, but provides an exhilarating level of performance that?s sure to please the most avid motorist. That?s not to say that there are vehicles in the 4-Series stable that are capable of even more impressive performance attributes, while the clutch engagement and smoothness of the close ratio six-speed manual gearbox is just as impressive. 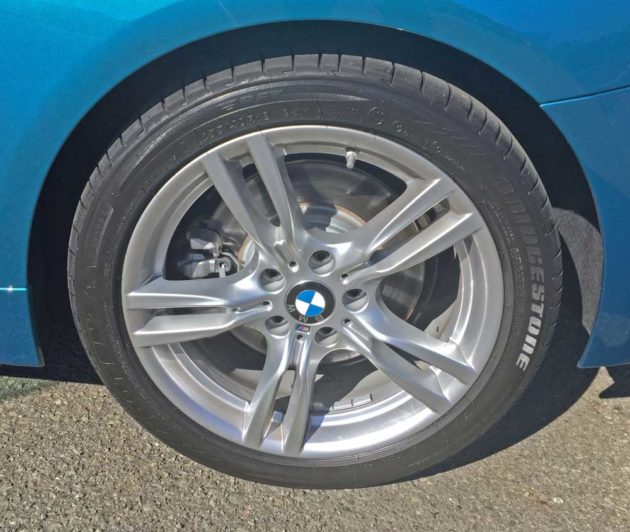 Nothing to sneeze at, is the 248 horsepower and 258 pound feet of torque delivered from a 4-cylinder motor. Acceleration comes instantly on demand with no noticeable turbo lag. Hauling the ponies to a halt also works impressively.

The seats are highly supportive and adjustable for just the right feel when attacking challenging driving scenarios such as tight, twisting back roads.

If there?s a shortcoming for the stylish 4301 Coupe, it?s the back seat ingress and egress. Getting in is considerably easier than getting out, and the headroom in the back is especially minimal for ectomorphic body types.
In the bottom line analysis, one might pose the question ? ?Is the 2018 BMW 430i worthy of its price tag?? We certainly think so, particularly if you happen to be a Bimmerphile. The BMW 4 Series is essentially a 3 Series coupe, and if you’re looking for the driving dynamics of that sedan but in a sleeker package, the 430i Coupe is a positive way to go. It is among the top three best-selling small luxury vehicles, with sales registering a 10.8 percent jump over 2016. 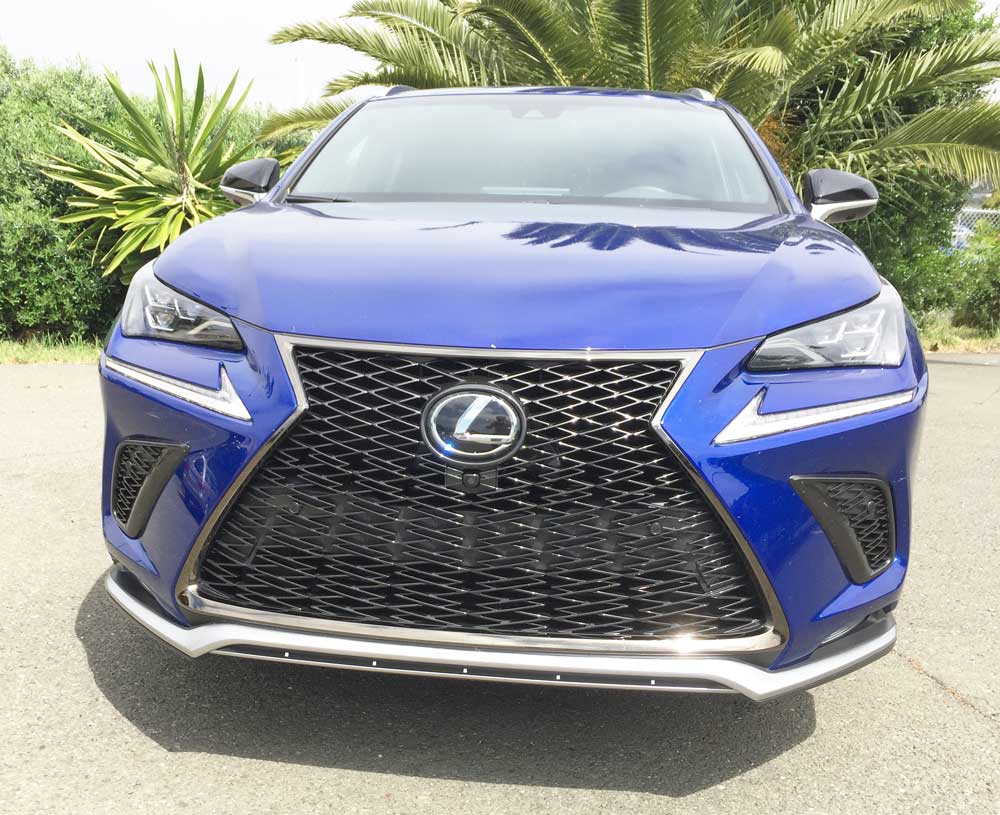