Audi has launched its first compact sedan to wear RS badging ? the 2017 Audi RS 3 sedan. This is no ordinary 3 Series sedan as with the RS designation, it trumps the class competitors for performance, while also delivering a heightened degree of practical everyday functionality, and providing consumers with an attractive entry point into Audi?s Sporting stable. 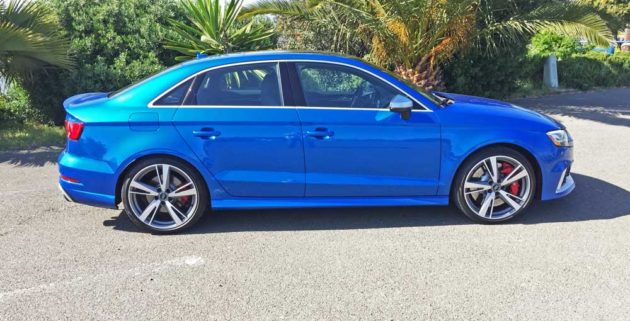 Specifically developed for the U.S. marketplace the RS 3 draws its energy from an all-new generation of Audi?s 2.5-liter five-cylinder TFSI engine that cranks out a whopping 400 horsepower, along with 354 pound feet of torque. The transversely mounted front engine?s motive force is geared through a seven-speed S tronic? dual-clutch automatic transmission, driving all four wheels via a reinforced Quattro permanent all-wheel drive system. The displacement amounts to 160 horsepower per liter, And the maximum torque is available at a low 1,700 rpm, remaining constant up to 5,850 rpm, resulting in it ability to travel from 0-60 mph in an impressive 3.9 seconds, with a top track speed capability of 155 mph, which can be boosted to 174 mph by adding Audi?s optional Dynamic plus package. A launch control program is now offered, allowing faster acceleration through precise engine speed and an automated clutch release thanks to the 7-speed DCT gearbox. 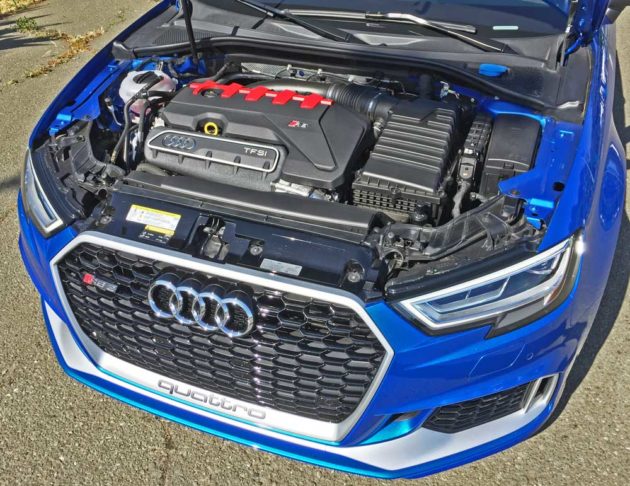 The 5-cylinder engine delivers an authoritative rumbling exhaust note that?s capable of bringing of a broad grin to any gearhead?s countenance. Admittedly, while it may not rival the sound of a healthy V8, it?s still delightful. The unique and distinct rhythmic sound may be further enhanced and controlled by opening the flaps of the standard RS system. 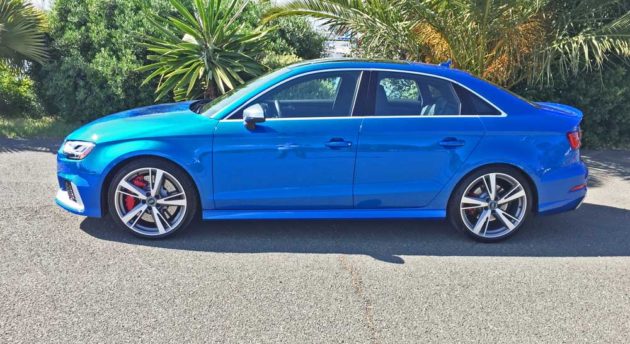 The standard quattro? all-wheel drive system features an electrohydraulic multi-plate clutch that?s placed at the end of the prop shaft, resulting in ideal axle load distribution. There?s no pre-set torque distribution, but rather specific RS programming that delivers as much power to the rear axle as possible for improved driving dynamics. The quattro system is also fully integrated within the Audi Drive Select system that provides four distinct driving modes: Comfort, Auto, Dynamic and Individual. Each mode enables the driver to change gear shift points, steering and throttle response, as well as damper control when equipped with Audi?s magnetic ride. 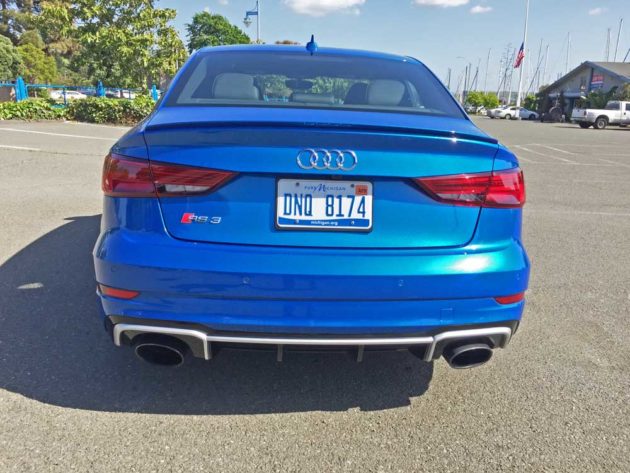 Handling characteristics are also enhanced by RS-specific programming for the ESC with wheel selective torque control and an available sport mode. The progressive steering tuned fir the RS is standard issue, providing a sporty response and excellent road feedback. 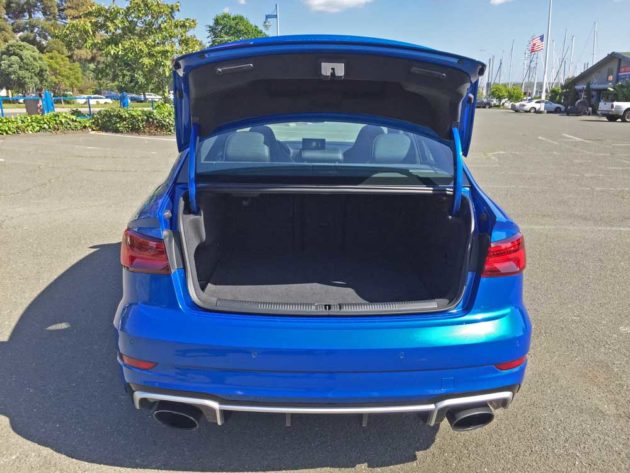 There are two available brake systems ? a standard power-assisted four-wheel vented disc system with Black painted eight-piston monoblock calipers featuring the RS logo; or available front carbon ceramic discs up front as part of the Dynamic Plus package, which are painted Anthracite Gray and wearing the RS logo as well.

Visually, the Audi RS 3 displays a more athletic exterior persona with more sport focused styling elements than the rest of the A3 stable. Starting at the front, the RS 3 features Audi?s signature Singleframe? grille with a three-dimensional honeycomb design with the Quattro script, and an aluminum-matte finished blade that extends the full width of the car and connects to the large front air intakes. Wider front wheel arches hint at the vehicle?s Quattro DNA. 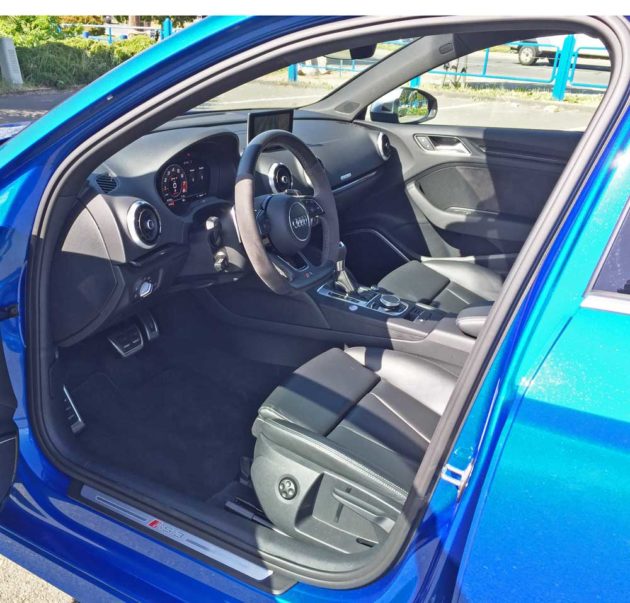 Slipping into the cabin, the interior design elements provide driver-oriented switchgear with easy to initiate functions. The S sport seats offer sharply contoured side bolsters for added support during spirited driving maneuvers. They are Napa leather and are embossed with the RS logo and feature contrast diamond stitching and four-way lumbar support. 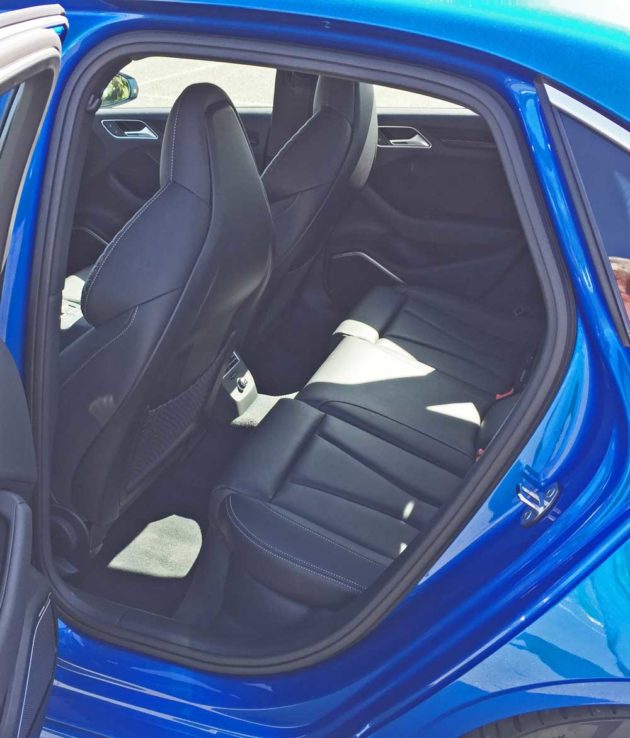 The RS 3 is loaded with Infotainment and Driver assistance features and technology such as Audi?s available Virtual Cockpit. Smartphone interface is standard for compatible devices, providing Apple CarPlay? and Google? Android Auto integration via USB connection. 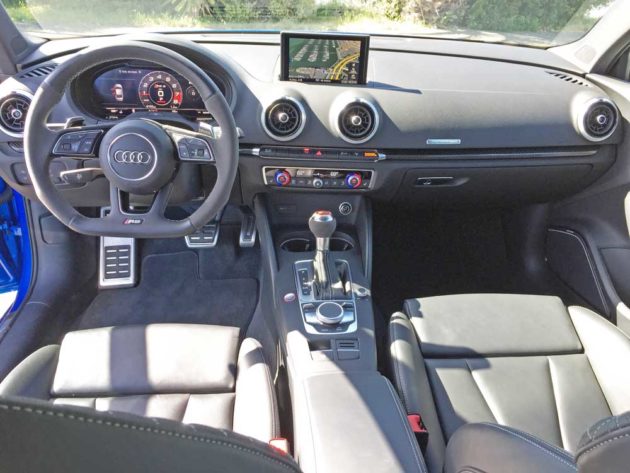 My test Audi RS 3 sedan was one of a limited number of 2017 models to arrive first in the U.S. 2017 models were preconfigured with carbon fiber inlays, Audi?s virtual cockpit with MMI? Navigation Plus, Bang and Olufsen Sound System, 19-inch 5-blade design wheels with a titanium finish, red brake calipers and the RS sport exhaust system with black tips. The base sticker read $54,500., with the final count and amount coming to $62,475. After factoring in: the Ara Blue Crystal Effect metallic exterior finish; the Technology Package; the Dynamic Package; RS carbon decorative inlay trim accents and the Destination charge. 2018 models will start at $400. More.

SUMMARY: The Audi RS 3 sedan is a joy to drive. It is quick, its is agile and it is also quite stable and comfortable. I preferred the Dynamic setting of the Drive Mode Select, which proved to be a little more rigid to the chagrin of some passengers, who found the Comfort setting more enjoyable. The Pirelli P-Zero staggered rubber showcased an exceptionally low profile, which added to the stability, but subtracted from the comfort level. 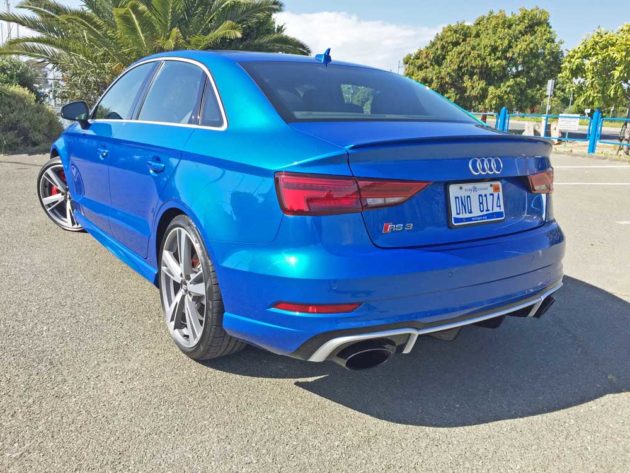 The RS 3 also ranks as ?eye candy?, especially in its Ara Blue Crystal Effect coat (well worth the extra $1,075.) The stance was most aggressive giving it the look of high-speed motion even when at a standstill. 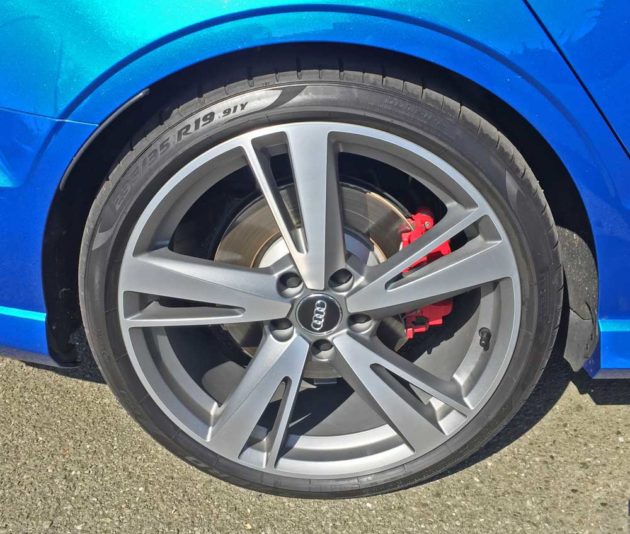 This hot rod Audi Sedan left nothing to be desired, especially considering its content and performance potential. It?s initial appearance effect is modest, looking to some as sedate, but with closer study, it tends to generate a stronger emotional feeling, which is definitely solidified by piloting it over challenging, twisting back roads. Bottom line, even though it represents the entry level of Audis? RS performance group, it?s a cut above several competitors. 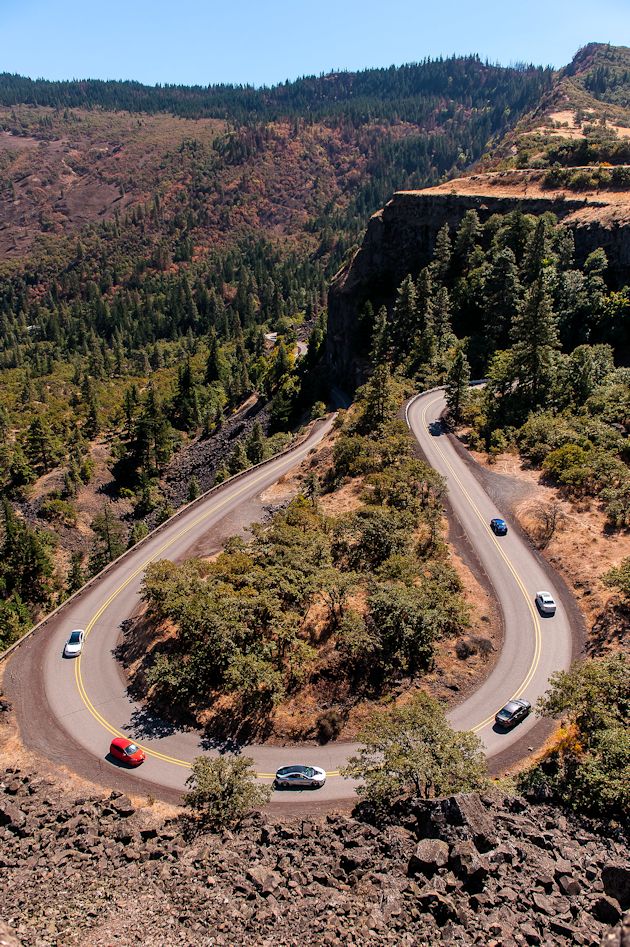