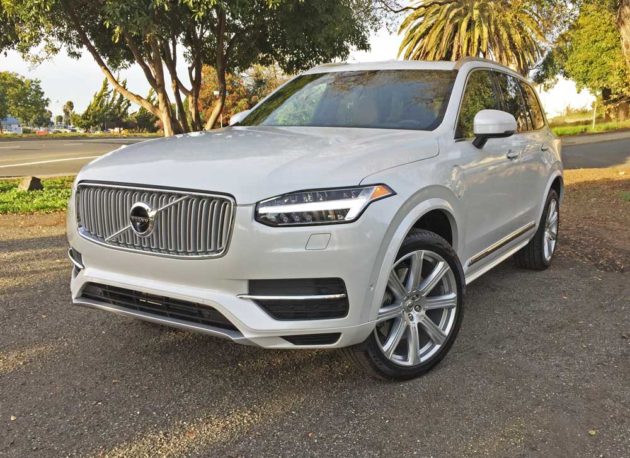 Volvo, the Swedish automaker was founded in 1927 and was sold to Geeley, a Chinese company in 2010. Volvo however, operates autonomously and continues to be just as focused on superior safety technologies as it ever was, but safety features and equipment are not Volvo?s only area of concentration. Fresh new and appealing design elements inside and out, are showcased in their latest all-new SUV models ? the Volvo XC90 T6 AWD, which will be available in three levels of trim, and the Volvo XC90 T8 AWD Twin-engine plug-in Hybrid, the first such Hybrid SUV to offer 7-passenger seating. The XC90 T8 Twin Engine plug-in electric hybrid is powered by Volvo?s 2.0 liter supercharged and turbocharged Drive-E engine and a 92kWh high voltage (270-400V) rear axle electric motor, Lithium-Ion battery and dual voltage (110V/220V)charging cable. 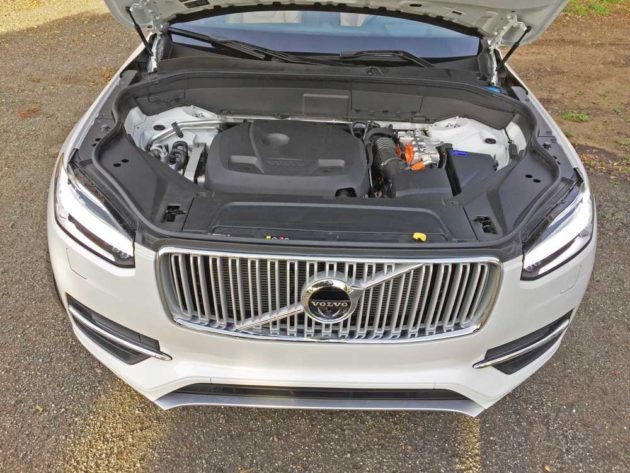 With the combined gas engine and electric motor, the T8 can achieve 400 horsepower along with 472 pound\ feet of torque, and is capable of scooting from 0-60 MPH in just 5.7 seconds ? impressive for a vehicle that tips the scale at just over 2 ? tons. Selectable operational modes provide varying performance levels and flexibility. 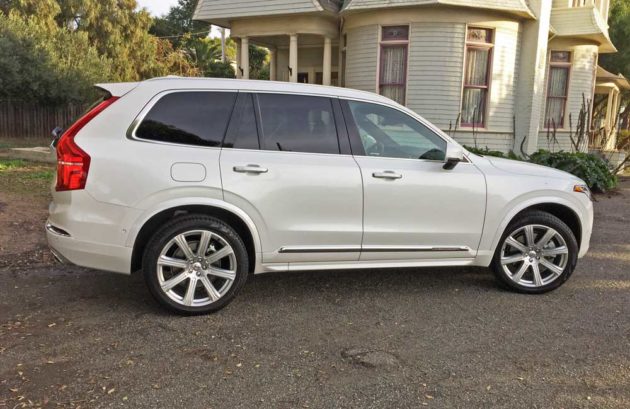 The Volvo XC90 luxury SUV was first launched in 2002 and has undergone a simple evolutionary development process ever since – up until now. The 2016 Volvo XC90 T6 AWD comes in three trim models, all of which are powered by a 2.0-liter, DOHC, 16-valve Supercharged and Turbocharged in-line four-cylinder engine with an integrated (SFI) ignition control system that makes 313 horsepower at 5,700 rpm while developing 295 pound feet of torque in a range from 2,200 to 4,500 rpm. The gas engine pairs with the transversely mounted front engine and mates to an AW TG-81SC eight-speed Geartronic automatic transmission that meters motive energy to all four wheels. The turbocharging is constant, with supercharging automatically activated as needed. 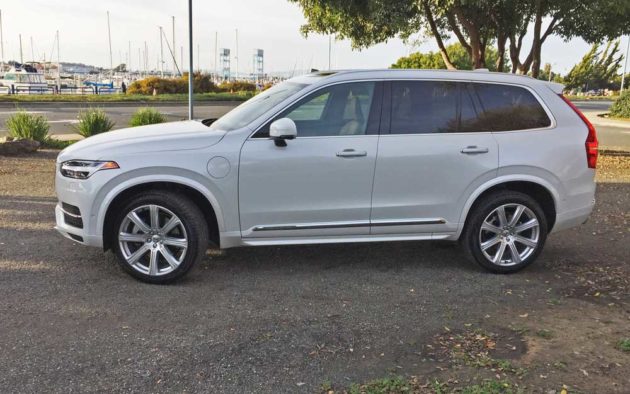 External dimensions along with the mechanicals are shared by all trim levels: The Momentum trim is expected to be the volume sales leader, starting at $48,900. All models tested were Inscription models, which begins pricing at $54,500, followed by the T6 AWD R-Design that starts at $52,900. Add a $995 Destination and Handling charge to all models. All trim levels of the XC90 T6 are AWD only. The T8 Twin engine plug-in Hybrid model starts at $68,100. 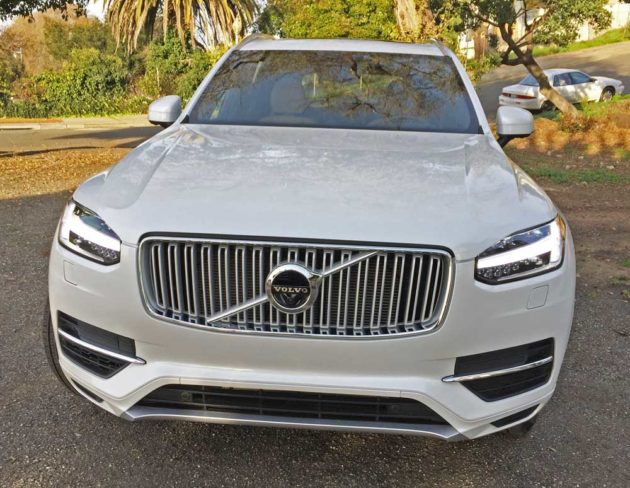 The new exterior design face marks the beginning of a new chapter in the company?s history, reflecting the direction of future design, infused with a range of new technological advancements and incorporating the new Scalable Product Architecture (SPA) technology. The new Volvo XC90 is the first vehicle to feature the company?s more prominent ?iron mark?, with an arrow aligned with the diagonal slash that appears across the new grille treatment. This coupled with the T-shaped ?Thor?s Hammer? LED daytime running lights signals the direction of future generation Volvos. The XC90 also displays a larger, elegantly sculpted hood along with a prominent beltline and pronounced shoulders that connect to a new rear light design and a wider rear stance. 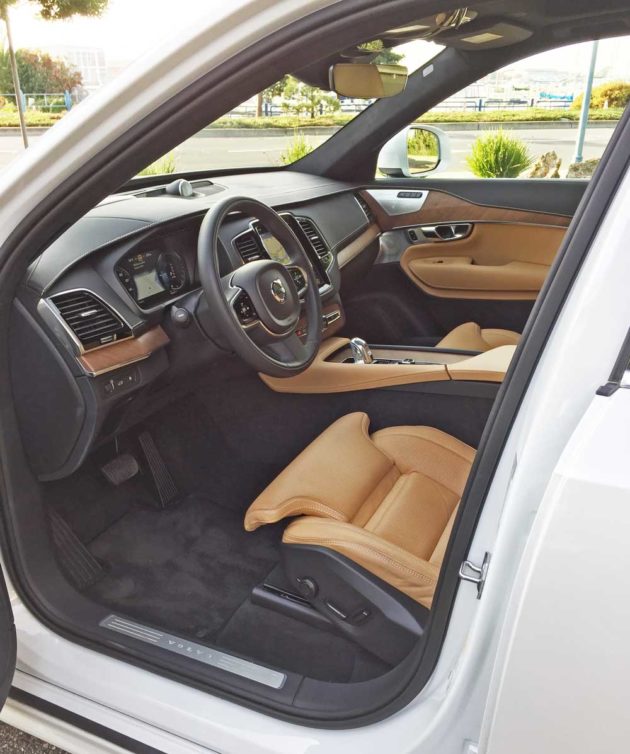 The interior is the most lavish Volvo SUV to date for, featuring a tablet-like touch screen control console that serves as the nerve center of an all-new in-car control system called SENSUS, which is virtually button-free, resembling an iPad and enhancing the cabin?s ambience. The digital craftsmanship and layout may best be described as a stack of flexible ?tiles?, each displaying a key functionality. Information, navigation and media are high up and easy to check, while Phone controls, application icons and climate controls are positioned low, easy to reach and touch. The Crystal gearshift knob adds a touch of elegance. 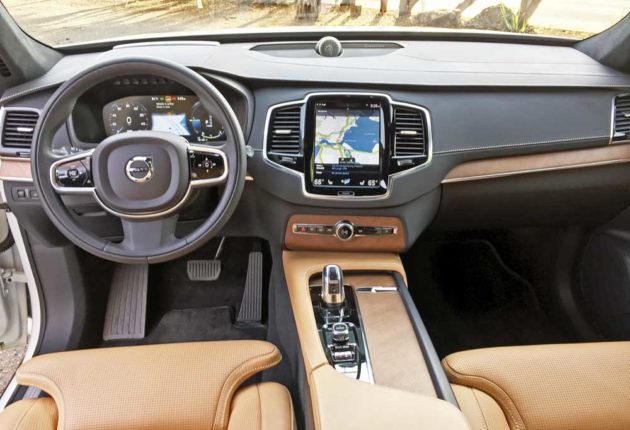 Handcrafted details and rich materials including Nappa leather and wood trim elements. Controls have been modified with a diamond-cut pattern for a more organic and tactile feel. The new XC90 T8 enhances Volvo?s reputation for superior seating comfort by offering innovatively designed seats that also happen to free up interior space for passengers both in the second and third seat rows, helping to make the new XC90 a genuine 7-seater. The new seats are available with adjustable side bolsters, seat cushion extension and massage, as well as heating and cooling capabilities. 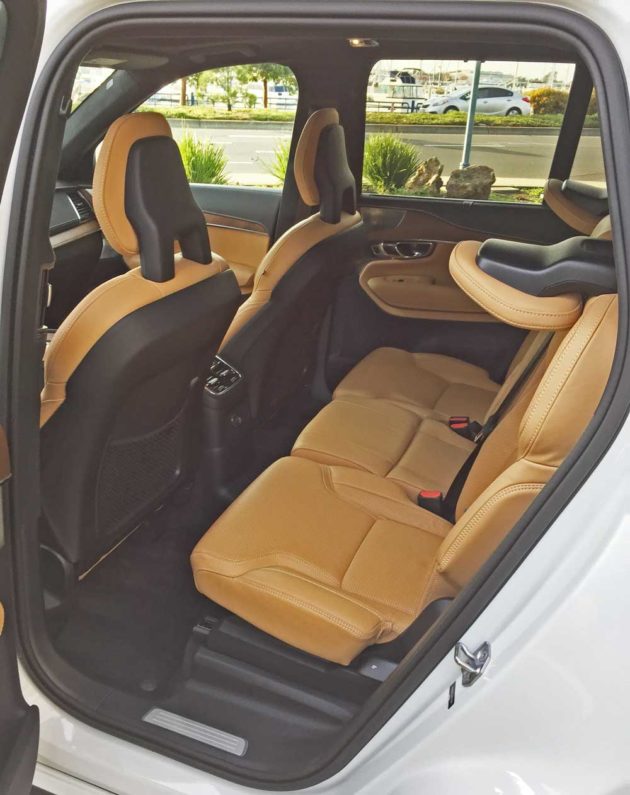 The second row features three individual seats (40/20/40) with recline adjustment. A sliding function may be used to create more legroom for passengers in the third row ? or to increase loading space. An integrated child booster cushion in the centre seat is optional. Third row seats are centered for an offset visual path around second row headrests and complete the theatre staging.

Driving dynamics serve up the smooth, solid ride of a premium SUV, but with a blend of sharp handling and response. The chassis is completely new, fore and aft, with a double wishbone front suspension and a new integral link rear axle that features a new composite transverse leaf spring. The XC90 may also be equipped with an electronically controlled air suspension that provides a choice of five modes.

For the North American press introduction, only production version Inscription model Volvo XC90 T6 AWD units were provided ? all with Black Onyx metallic finished exteriors and Amber and Charcoal interiors with linear walnut inlay trim elements. The Inscription models tested started with the Momentum model as a base, priced at $48,900 and added the Inscription features package priced at $5,600. along with several other options. I was able to later test a T8 twin-engine Plug-in Hybrid Inscription model at home and a final tag totaling $88,855. as equipped and with the Destination charge added. Its exterior sported a Crystal White Pearl metallic finish, while the interior was executed in Brown Nappa leather upholstery with Charcoal trim, and natural matte finish wood trim accents.

SUMMARY: The 2017 Volvo XC90 T8 Twin-engine Plug-in Hybrid Inscription is a high performance luxury SUV, showcasing features that rank it as ?King of the Hill? in terms of safety and security. Also included are two world first safety technologies: a run-off road protection package and auto brake at intersection capability. 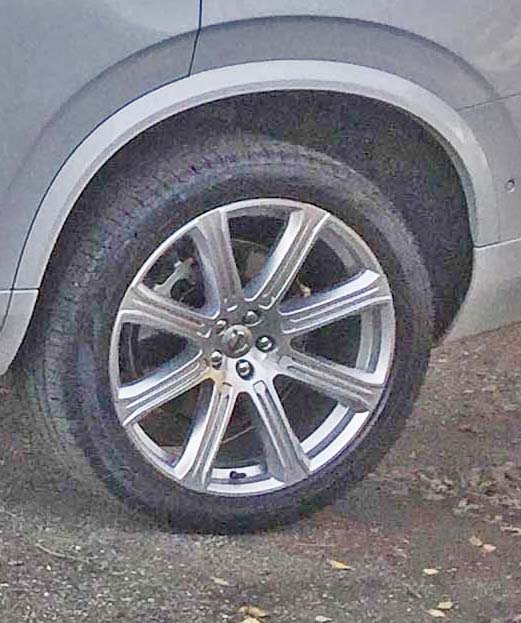 This all-new XC90 series is the most visually appealing Volvo SUV lineup produced to date. It is also the most comfortable and the best handling, driving more like a luxury sedan, but with sporty attributes. The cabin ambience is not only luxurious, it is highly functional as well. Flexible seating configurations provide a high level of versatility, and the laminated Panoramic Moonroof with power sunshade provides a spacious, open-air feeling. 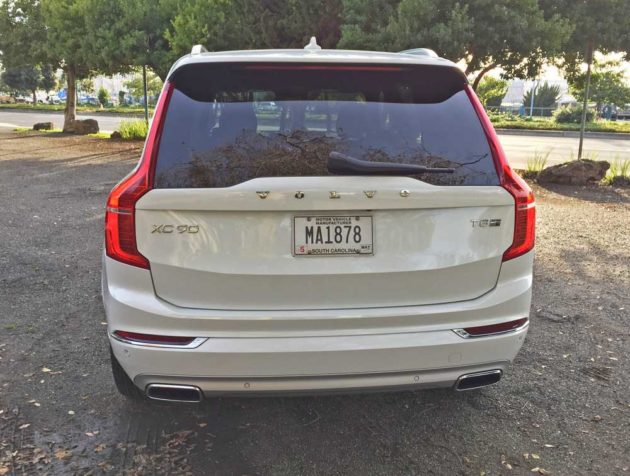 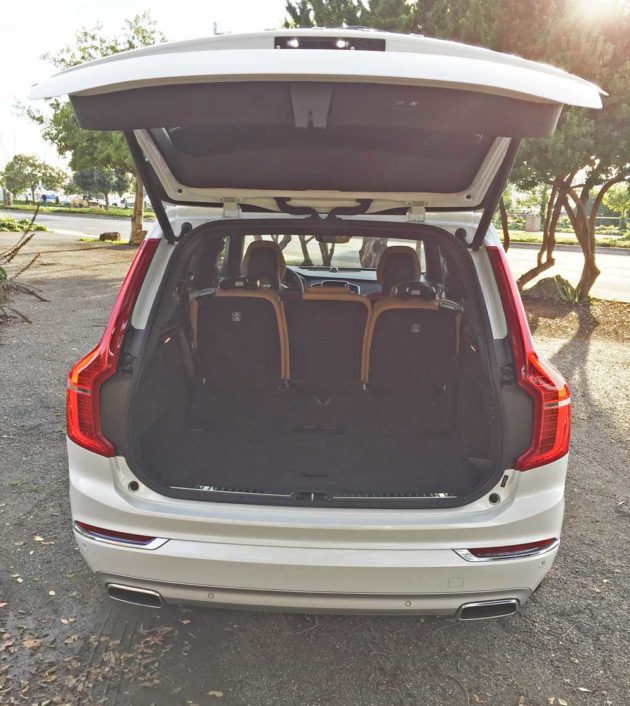 The Eco, Comfort and Dynamic (make that Sport) modes offer a wide variety of driving applications to appropriately fit specific scenarios, and the controls may be changed on-the-fly, 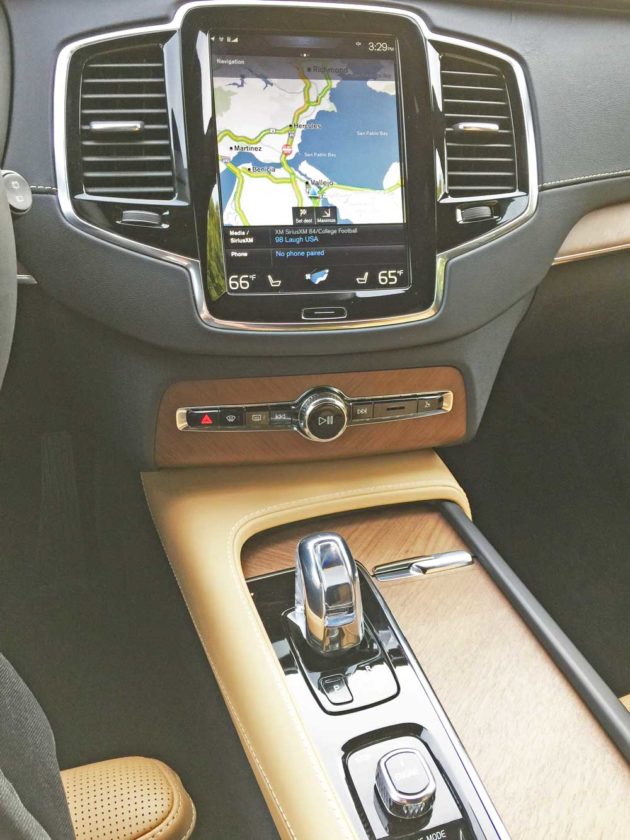 Bottom line, The 2017 Volvo XC90 T8 Inscription Twin Engine AWD Plug-in Hybrid is a winner, after hurdling the lofty price tag, and it?s destined to compete admirably and no doubt highly successfully in a very competitive field. Think of it as a Scandinavian Sanctuary that certainly represents a huge advancement in status and capability over the very first Volvo model ? the 1927 PV4 4-door sedan model. 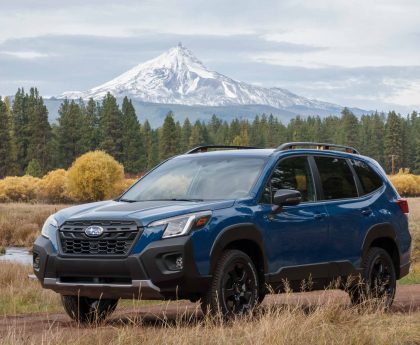 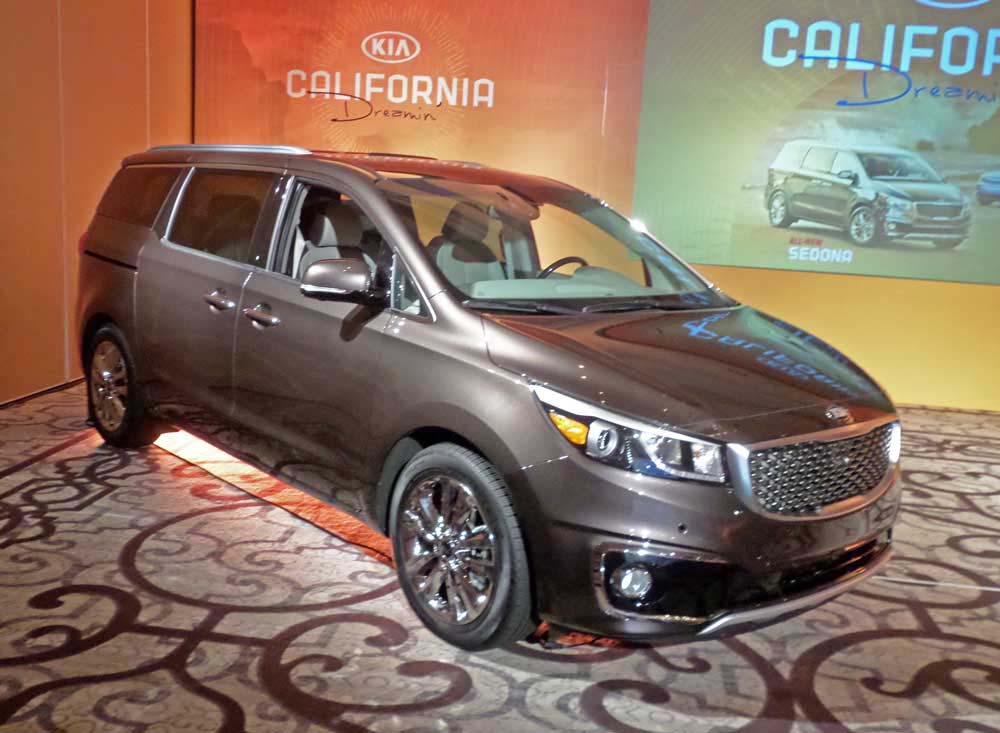