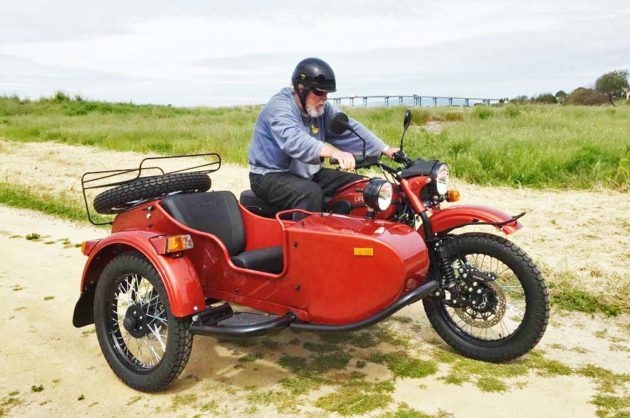 Eight years ago, I rode my first sidecar rig ? a 2009 Ural Gear Up 2WD model. It was truly a SUM ? ?Sport Utility Motorcycle?, and looked for all the world like a restored BMW World War II ride, with its camouflaged matte paint finish. The Russian-built Ural sidecar rig has been around for quite some time, arriving here in the U.S. in 1993, thus ending the Cold War ? at least on the motorcycle front. 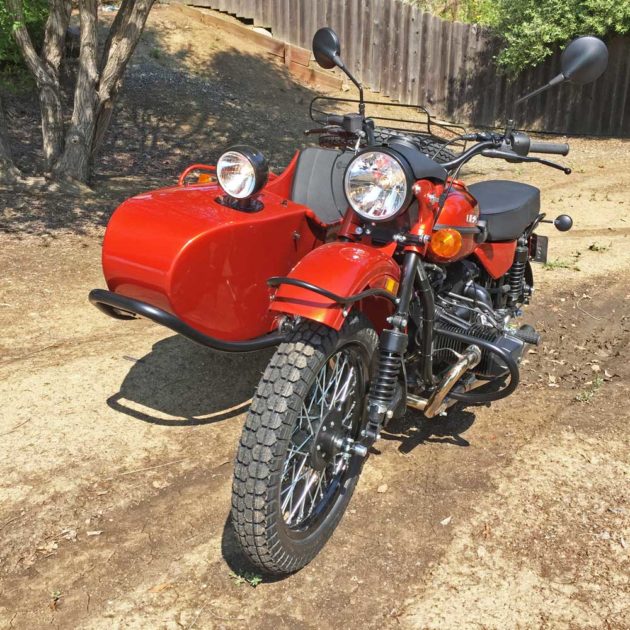 The Ural is descended from a late 1930s BMW R71, when Joseph Stalin ordered the production of a motorcycle/sidecar rig for military use by the Red Army. Russian engineers managed to obtain a handful of the BMW R71 models (the method of acquisition is not officially confirmed) for the purpose of copying them at a Moscow located factory. 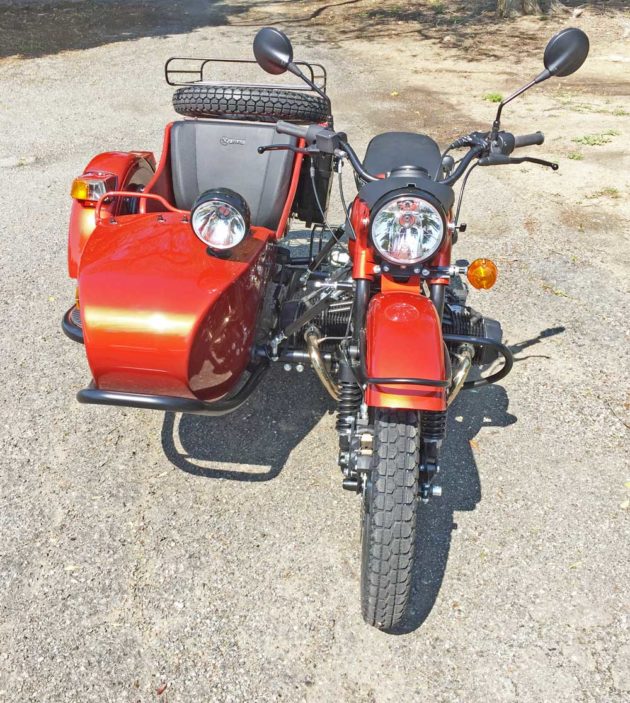 The Soviet replica was code named M-72 and had gone into full production by 1942 in the city of Irbit, in the foothills of the Ural Mountains, safely out of range of German aircraft raids. Ural military production reached nearly 10,000 units during the war, and units were later sold to Russian civilians and neighboring nations as well as allies like Cuba. Production climbed to approximately 130,000 Urals annually by the mid -1980s in their huge facility. The Ural was a popular transportation mode for the working class due to its affordability and practicality. When the U.S.S.R. as we know it fell, Ural production plummeted to as little as 2,000 bikes per year. 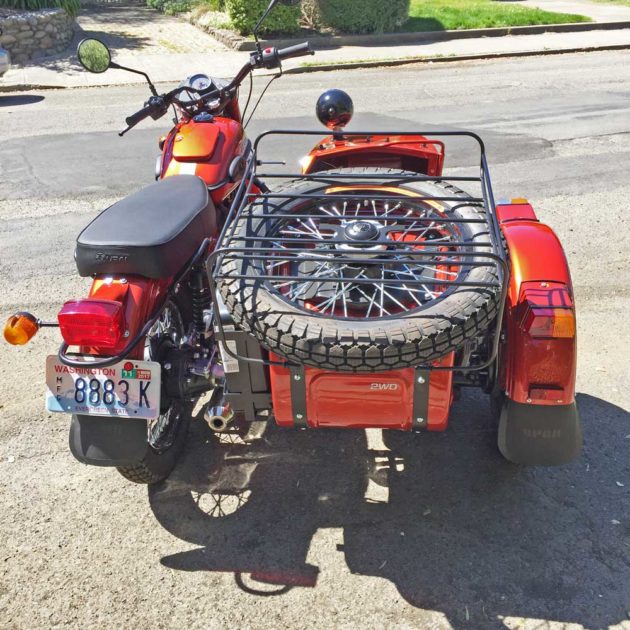 The company entered partial private ownership in 1992, and was purchased outright in 1998 by a private well-to-do businessman. Seattle-based, independent importers Classic Motorcycles & Sidecars began handling distribution in 1993. The current organization? Irbit MotorWorks of America that is based in Redmond, Washington is the result of a 2002 management buyout, which included the factory as well as U.S. distribution, reminiscent of the AMF/Harley-Davidson ownership transition.
There are currently four basic Ural sidecar models, two of which are equipped with on-demand two-wheel drive. The Gear Up and Patrol models are the two-wheel drive rigs, while the conventionally driven units include: the cT; and the M70. The Gear Up comes in three trims: the base model Gear Up; the Gear Up Sahara; and the Gear Up Sportsman.

All Ural sidecar rigs are powered by an OHV air-cooled, four-stroke (Boxer-type) 749 cc flat-opposed twin cylinder motor that is now electronically fuel injected rather than carbureted, eliminating the need for a choke. The motor makes 41 horsepower @5,500 rpm, along with 42 pound feet of torque at 4,300 rpm. Gear changes are made via a manual five-speed transmission ? four forward and 1 reverse gear with a dry double disc clutch, through a shaft drive to the rear motorcycle wheel. On Demand two-wheel drive may be manually engaged, additionally transferring power to the sidecar wheel, courtesy of a crossover driveshaft. Starting is accomplished by either an electric or left side kick-starter.
The Ural rides on three 19-inch wheels with chrome steel lace spokes and cast aluminum hubs and rims, shod with three interchangeable Duro HF-308 4.00 x 19 tires all around. The rear motorcycle hub and sidecar hub are different 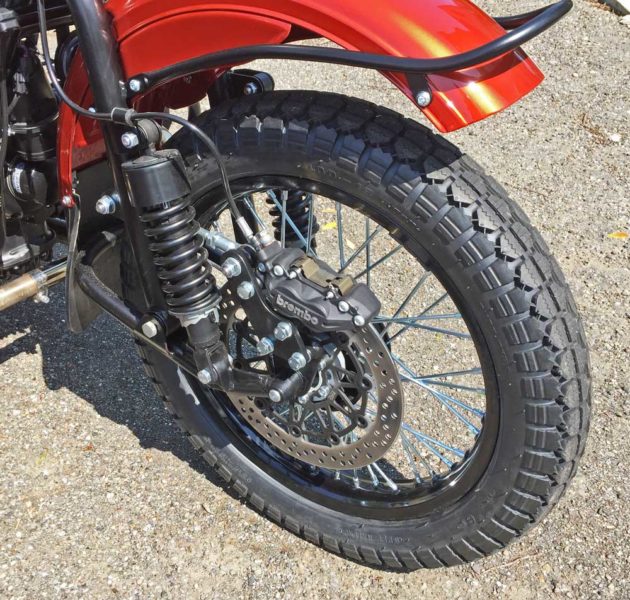 The suspension consists of IMZ leading link forks up front and a double-sided swing-arm with two Sachs hydraulic spring shock absorbers aft. The sidecar is fitted with a single-sided swing-arm with Sachs hydraulic spring shock absorber (also 5X adjustable). Bringing the Ural rig to a halt is handled by a 4-piston fixed Brembo caliper with a 295 mm floating NG rotor up front, while in the rear, is an HB big bore single piston integrated floating caliper with a 256mm fixed NG rotor. 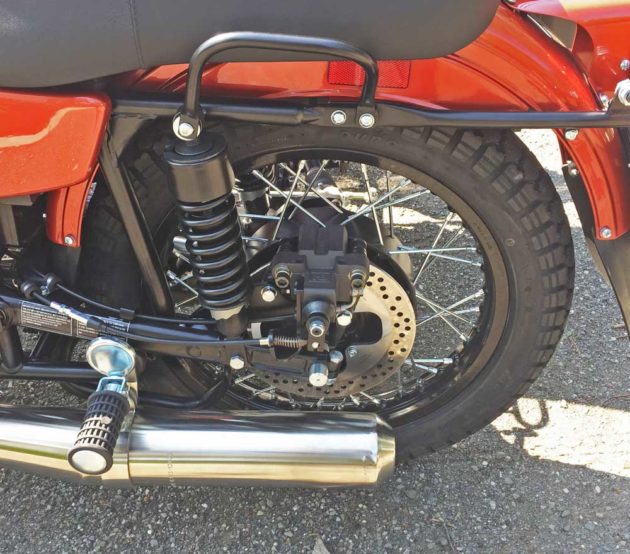 The sidecar brake is a two-piston fixed Brembo with a 245mm floating NG rotor
There have been a host of improvements and upgrades over the Ural that I first rode as the Ural continues to evolve and improve with each model year. Negative issues have now, for the most part, been overcome. There are new electronics, a repositioned and easier to use park brake, a sidecar power outlet and an upgraded braking system. A two-year, unlimited mileage warranty is now offered and the U.S. parts warehouse is located in Seattle, allowing the shipping of most within 24 hours. An additional 3rd year warranty may be added for $850 USD. 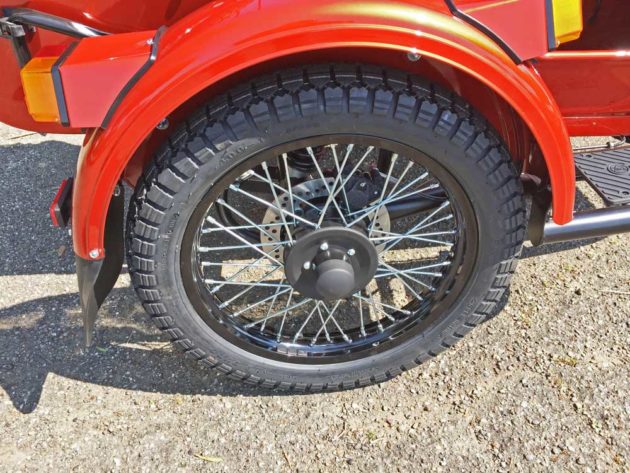 The initial appeal of the Ural comes from its classic appearance and aura of romantic adventure. Adventure is the operative element here ? if it?s all-out racy performance you?re after, you need to look elsewhere.

Before I was able to take delivery of that 2009 Gear Up, I had to take a crash course in sidecar rig operation (okay, crash probably isn?t the most ideal term to use here). My instructor was Ski Jablonski, an affable enthusiast who abandoned the high-tech computer-based world of California?s Silicon Valley to turn Ural dealer, service rep and mechanic. Ski?s ?TriQuest Motorcycles? in Santa Clara, CA. specializes in all things Ural and willingly spent several hours conducting my Ural orientation, both off and on the bike as well as in and out of the sidecar. Without his expert tutelage, either the Ural or I would have no doubt suffered some level of damage. 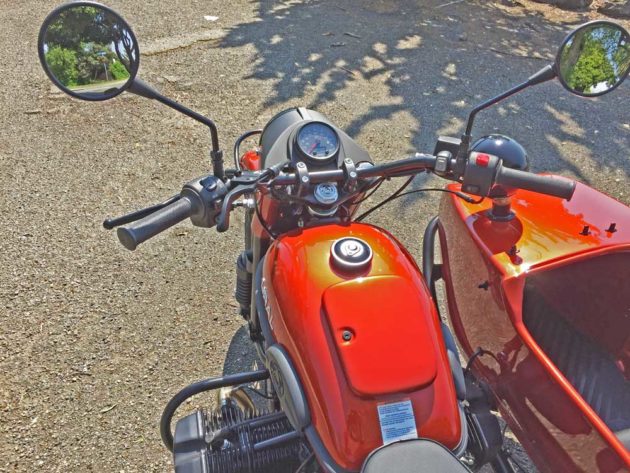 Piloting a sidecar rig is only vaguely similar to riding a conventional motorcycle ?the mechanical controls are essentially the same, but the physics are dramatically different. Sidecar rigs are asymmetrical rather than symmetrical which basically translates to the fact that the sidecar wheel is positioned ahead of the motocycle?s rear wheel rather than in line with it. The motorcylce counter-steering principle is out the window with a sidecar setup unless one ?flies? the car, either on purpose or unintentionally. Sidecar rigs steer directly. Roll on the throttle and the bike pulls to the right ? roll off and it veers left. Hang a tight, right hand corner going downhill at speed, particularly on a reverse camber surface, and you flirt with disaster. Body english is important with sidecars ? leaning to the inside of turns is recommended in either direction, but particularly to the right. 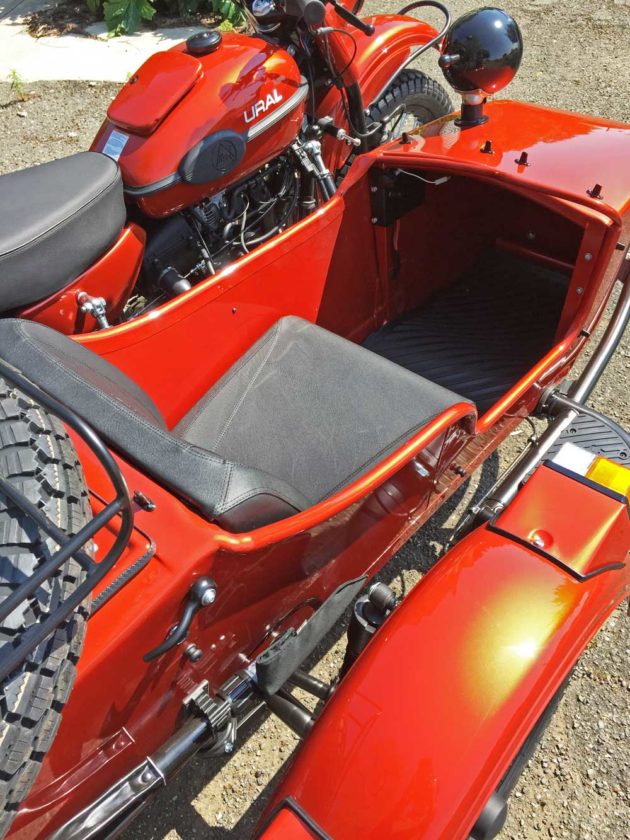 My test 2017 Ural Gear Up came with a Terra Cotta metallic exterior with a cloth tonneau and spotlight, a shovel and Jerry can. The engine, handlebars and crash guards were Blacked out. The base price was set at $16,499., while the Price as Tested came to $16,984. Dealer handling and prep may vary. An Asphalt color exterior finished Gear Up starts at $14,499.

SUMMARY: The Ural Gear Up serves as ideal transportation for a leisurely trek over the winding and picturesque Silverado Trail in the wine country of California?s beautifully scenic Napa Valley or other the rural roads. The pace is relaxed, as the Ural is much happier, and more in its element, at speeds up to 60 mph (or less) range, though it Is capable of achieving up to 70 mph when pushed hard (not recommended however) ? riding the Ural is about taking time to smell the roses (or grapes). 91 Octane fuel is recommended, and the 5-gallon tank will deliver 26-33 mpg, for a range of from 155 to 185 miles depending upon the terrain, riding styIe and load (maximum load weight = 1,325 lbs.). It is a delight with or without ?ballast?, which my better half objected being referred to. The suspension is most compliant, even over rough and irregular surfaces where it really shines. It?s quite comfortable for both the rider and sidecar passenger and there?s now an adjustable front steering damper.

Acceleration is adequate, but mind you, certainly not blistering, given the Ural?s intended purpose ? that of experiencing adventure and having fun on three wheels. The Gear Up comes standard with a firm, one piece Enduro style seat that will accommodate two on the bike itself with foot pegs for both, but two-up is only recommended when the sidecar is also occupied or loaded. Other seat styles are optionally available. The side car seat and seat back are padded vinyl, with storage beneath the cushion. 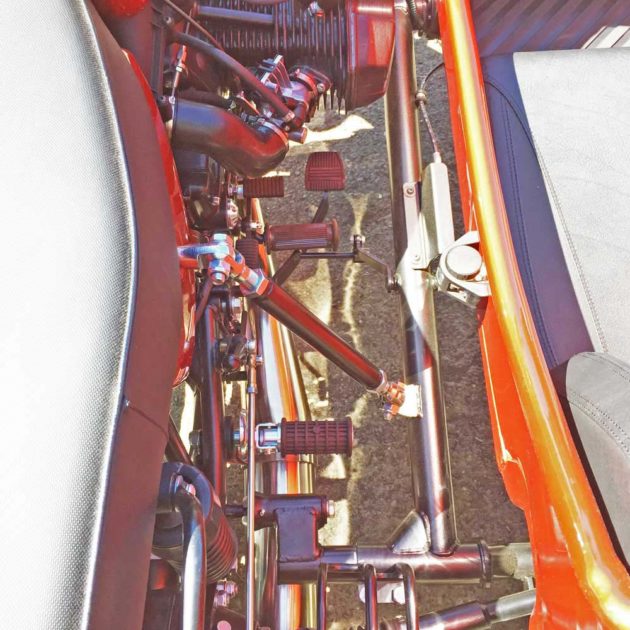 The reverse gear feature is a handy feature indeed, but must be in neutral to engage with a split rocker type shifter inboard of the rear foot brake. Advance planning when parking is a good idea. Manually engaging two-wheel drive is simple, but is only intended for off-road use or scenarios where traction is an issue. Steering becomes nearly impossible with 2WD engaged on paved surfaces.
There is no standard windshield on either the Gear Up bike or sidecar, but they are optionally available, and adding them would definitely add to the pleasantry of a bug-filled country backload excursion. There?s no fork lock either. The locking trunk in the aft section of the sidecar behind the passenger allows for carrying 2.9 feet of cargo. one shortcoming is that 4 separate keys are required for Ignition, tank storage compartment,trunk, and gas cap. 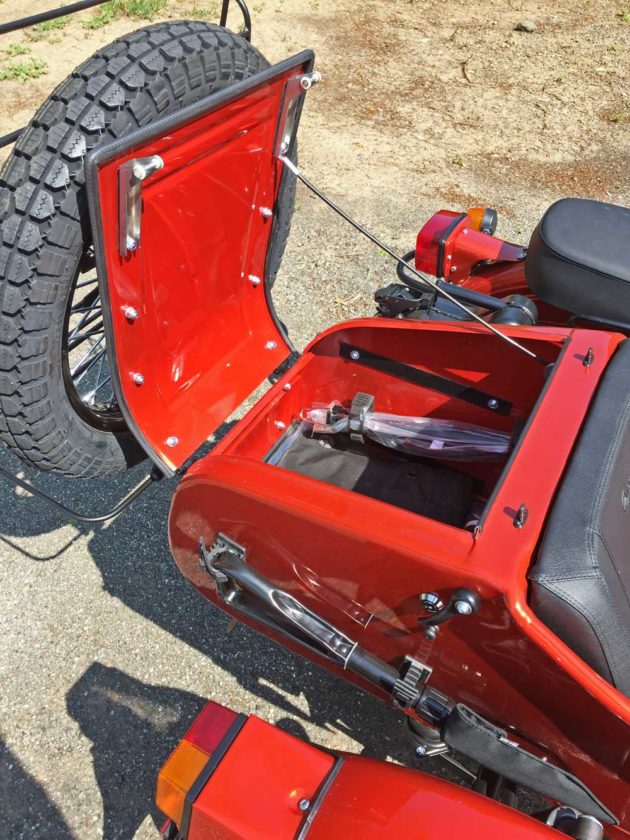 The Ural is a street legal ATV, and there are those who propose that three-wheeled vehicles do not require a motorcycle license certification in some states, which would also tend to suggest that a helmet isn?t required either ? bad idea. The jury is still out on this issue, since for instance, after checking with California?s Highway Patrol on the regulations; the definitions were vague at best. 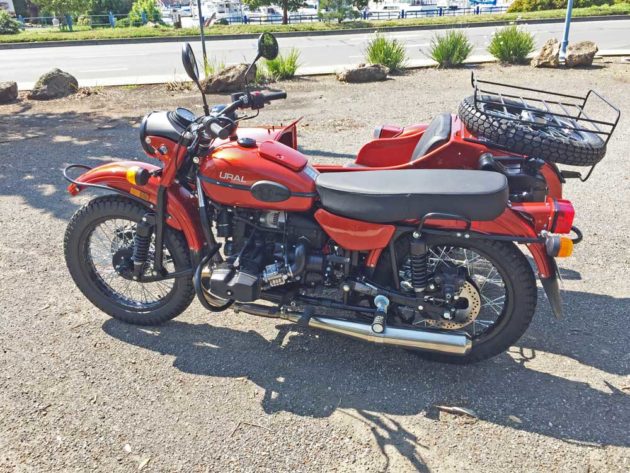 It seems that the only negative factor associated with traveling on a Ural, is the ?UDF?, should you happen to be pressed for time. UDF is the ?Ural Delay Factor?, which almost always includes a multitude of questions. ?How fast does it go, and how much does it cost?? were frequent queries. The answer to the latter also prompted disbelief. The addition of a self-cancelling turn signal would be a plus. 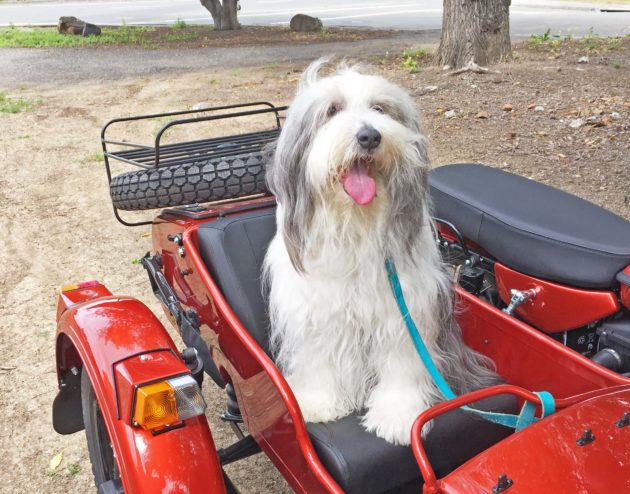 If riding a conventional motorcycle is no longer physically an option or if you simply want to take your significant other or dog along for a ride (Don’t forget goggles), the Ural sidecar rig may well serve as the perfect mode of transportation. 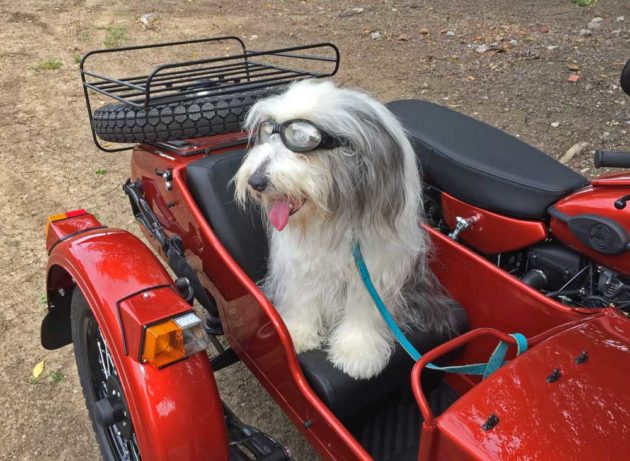 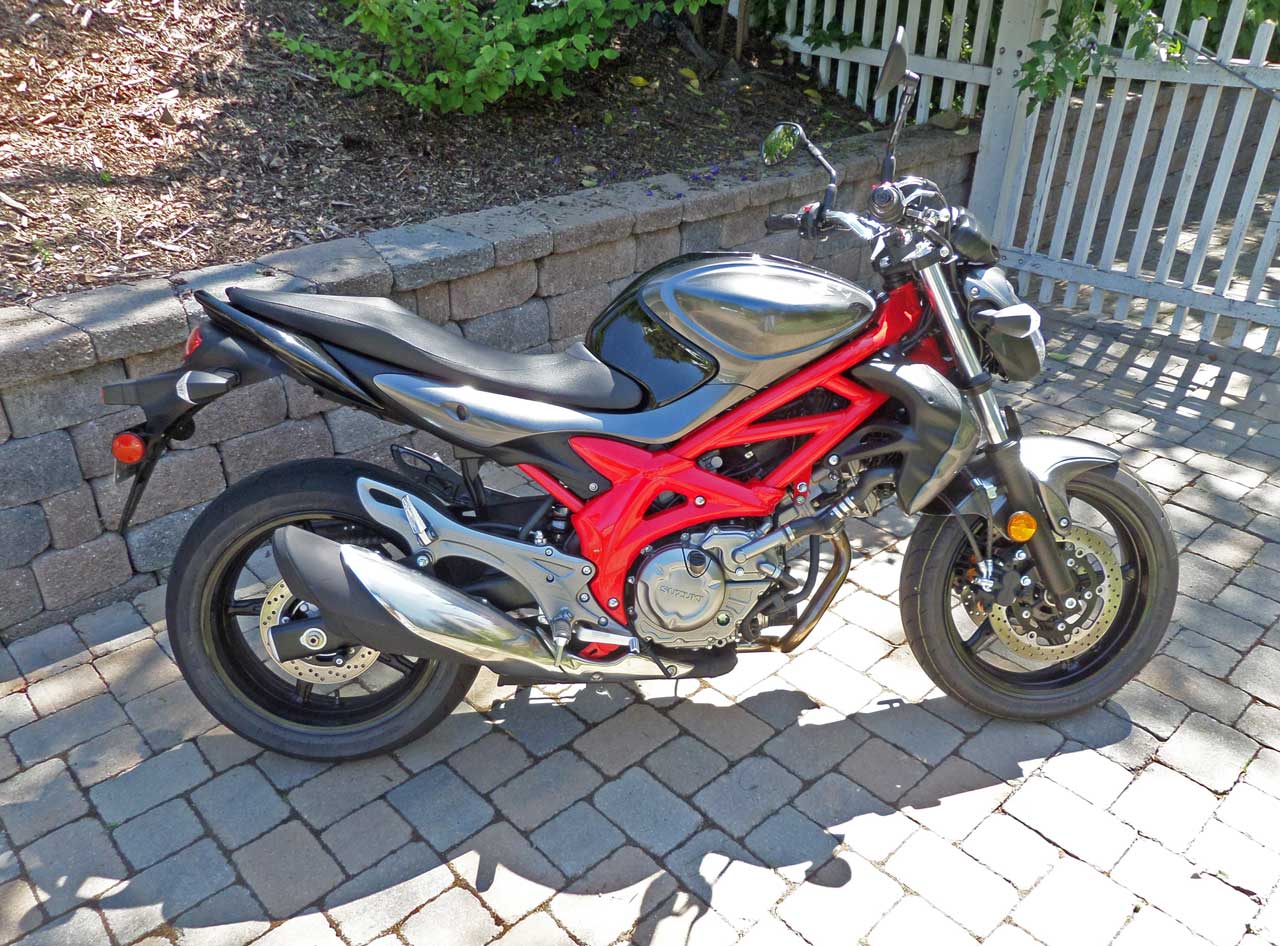 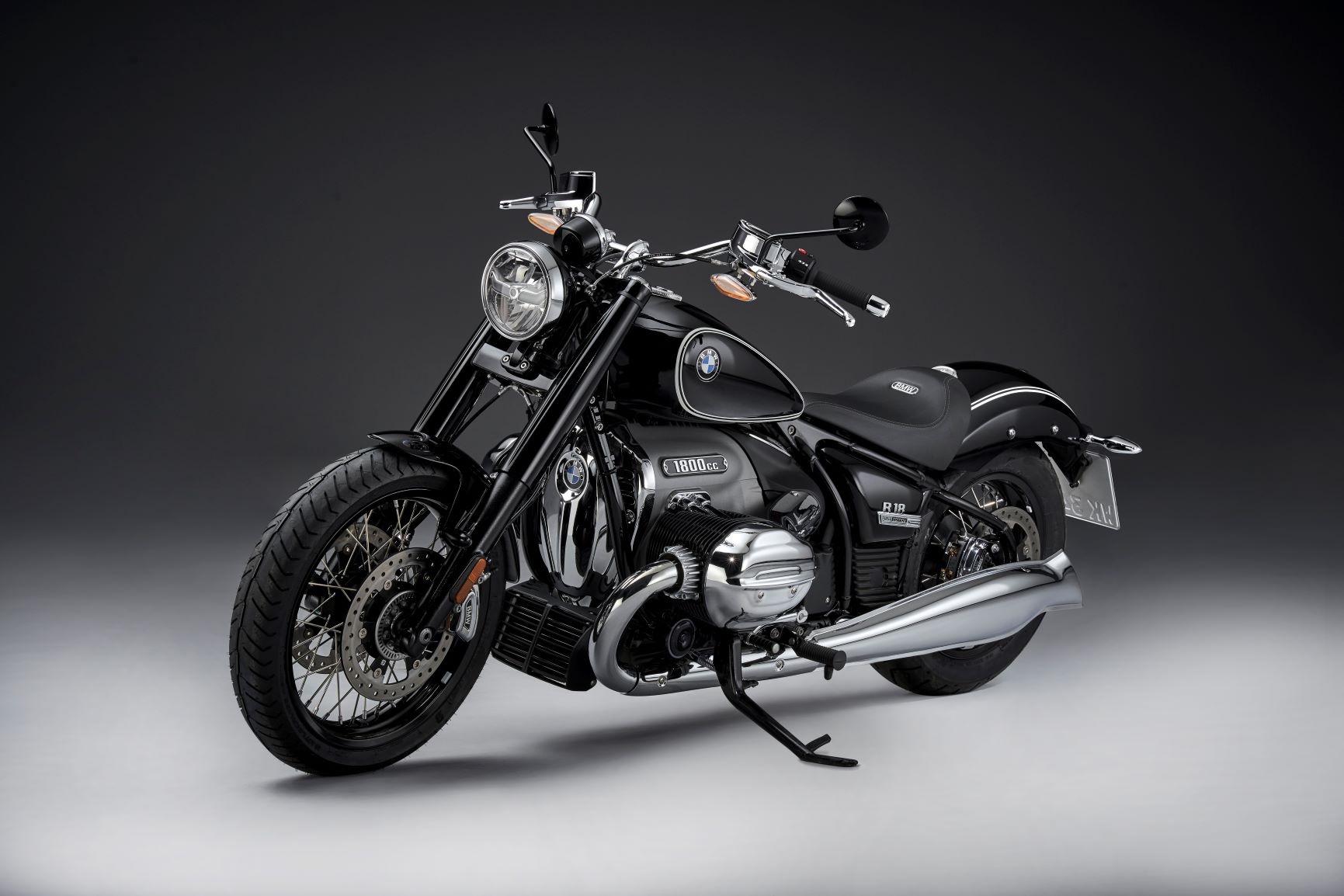