When Barbara?s son-in-law, Todd, called Thursday and said he would be racing at the Evergreen Speedway in Monroe, Washington on Saturday night we decided to go ? we seldom get a chance to see him race and we were only four hours away — Seattle traffic proved otherwise upping our drive time to five hours.

Todd races in the NASCAR K&N Pro Series. Although he?s driven in races all over the country (mostly on road courses) this year he decided to run a full season doing all the races. 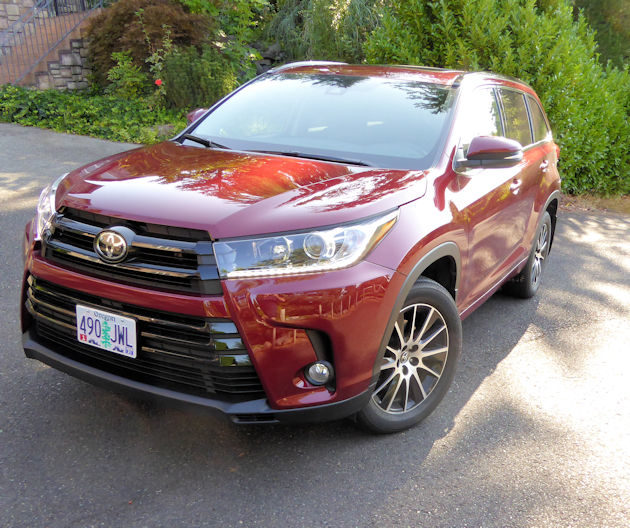 One of our road test vehicles for this week was the Toyota Highlander SE. Because Todd races a Toyota Camry and because Toyota is a sponsor of the Series, we thought it was only fitting for us to drive the Highlander to the race. 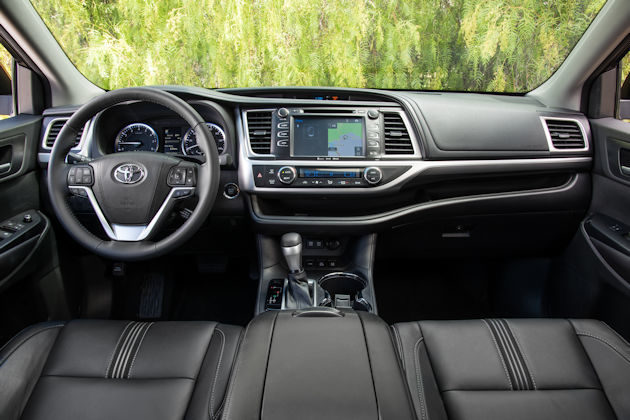 As we threw our things in the 2017 Toyota Highland on Saturday morning preparing for the 207-mile drive to the Monroe, we didn?t know what to expect, or when we?d be coming home. So, we went prepared with a change of clothes, lots of water, snacks, jackets, camera, binoculars and all the other paraphernalia we might need to watch the race from where ever we could. 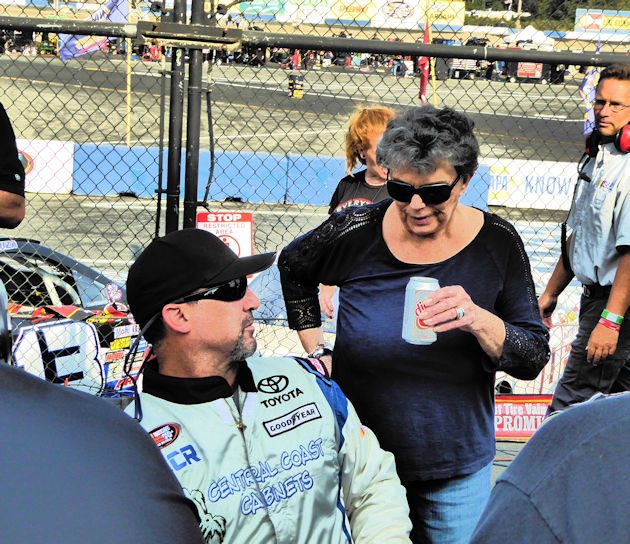 The Highlander turned out to be a great ?going to the races? vehicle, because we had lots of room, very comfortable seats, a smooth ride, the techno equipment we like, and excellent audio system with which to listen to our traveling entertainment ? this time a Stuart Woods audio book. 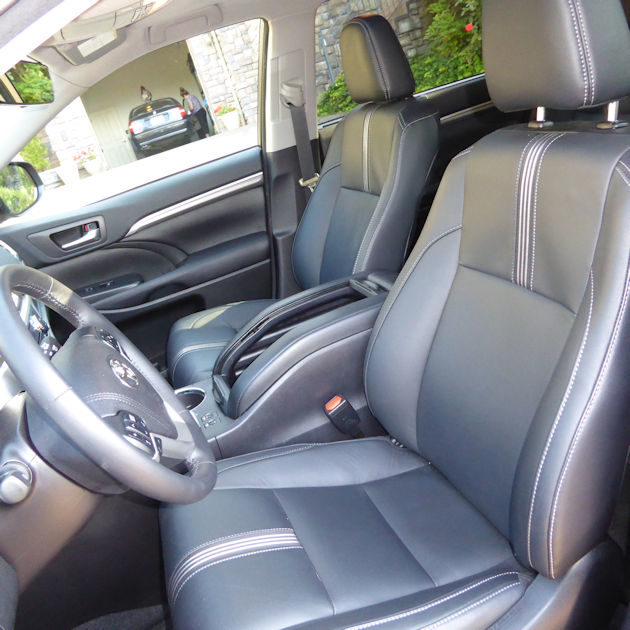 Also, the Highlander can seat up to seven, just in case we ended up having to haul Todd?s crew somewhere. Toyota offers more SUV choices than any other manufacturer with a total of 11 models when we count the hybrids and the four Lexus models. Of the total, the midsize Highlander is the second best-selling (next to the RAV 4) model. It?s also one of the vehicles on the Consumer Reports ?10 Top Picks? list for 2017. 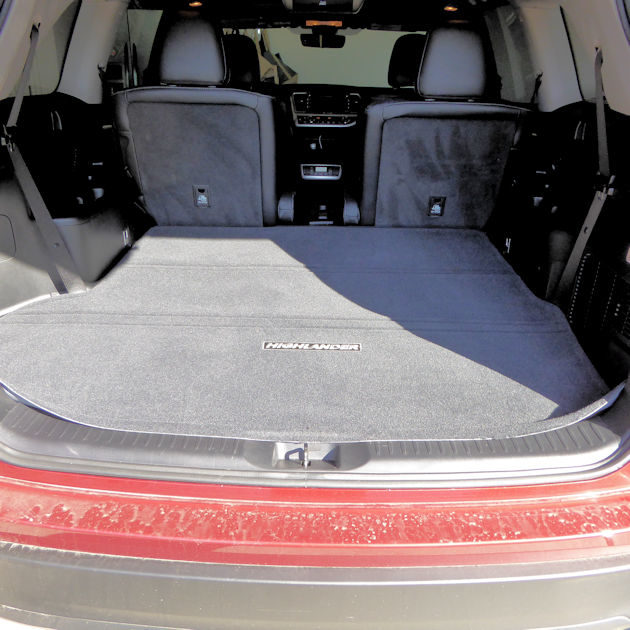 The all-new Third Generation Highlander debuted in 2013, but the 2017 received some significant updates including more power and better fuel economy. This latest edition has a new 295-hp 3.5-liter V-6 engine. The engine has D-4S Injection and Dual VVT-i which combined to increase the engine?s horsepower by 25. 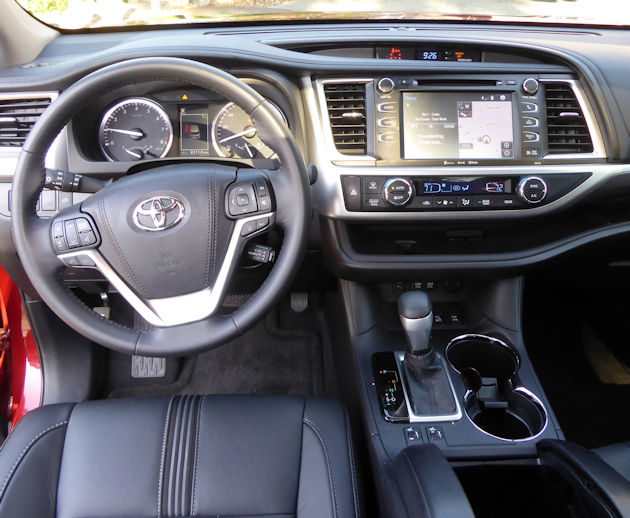 Also new is an excellent eight-speed Direct Shift automatic transmission. Mated with the V6 engine modifications, the pair earns an EPA rating of 20 mpg city, 26 mpg highway and 22 mpg combined. During our drive to the races we averaged 25.7 mpg in mostly highway driving, at speeds ranging from 65 to 75 mph. 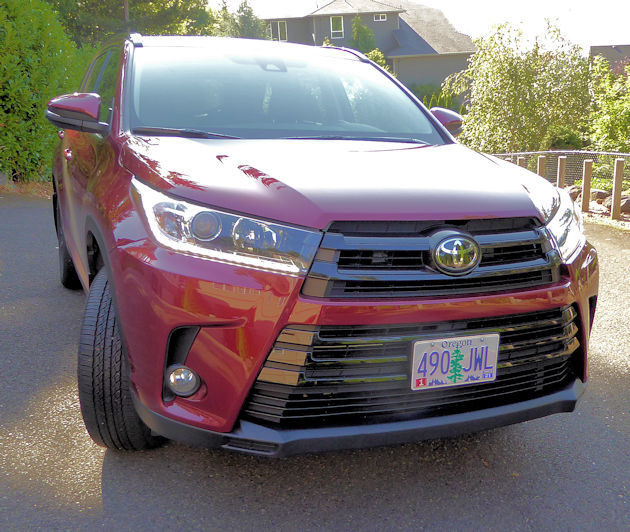 The transmission is super smooth, and quick shifting. It also has gated shifting for better control on some of the winding roads we encountered when off the freeway. The Highland has a ?snow? mode that starts it in second gear to help avoid spinning on snow or ice. It also has a center differential lock, Downhill Assist Control, Hill Start Assist, and the Toyota Star Safety System? with a suite of technologies designed to help make the vehicle safer. 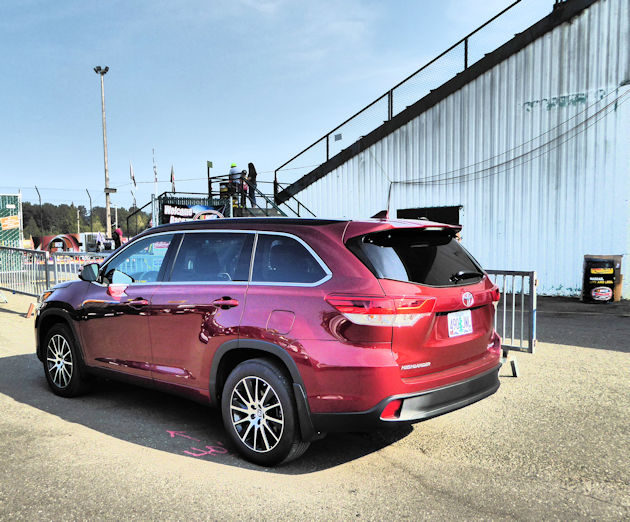 Counting the four Highlander hybrid versions there are 10 models available. Five of the six gas powered models have the V6 engine as standard equipment and front wheel drive, with all-wheel drive as a $1,460 option. The lowest level Highlander has a standard 185-hp four-cylinder engine with a six-speed automatic. Other than the price, (the V6 is a $3,115 option) we?re not sure why they offer the four-cylinder, because the fuel economy is better with the V6 than the four-cylinder which is rated at 20 mpg city and 24 mpg highway. 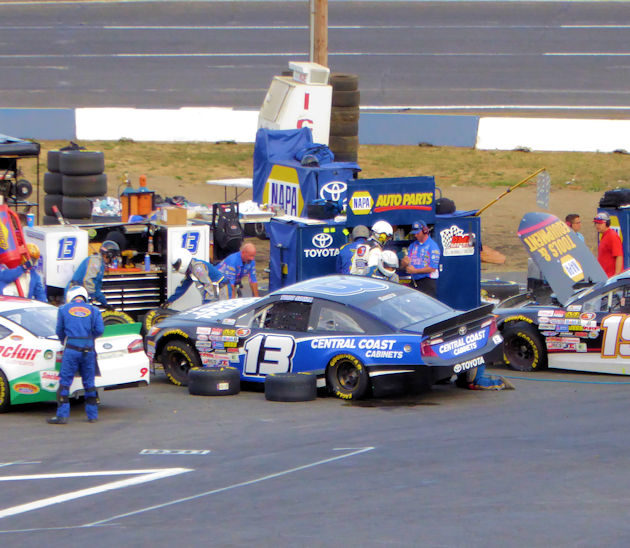 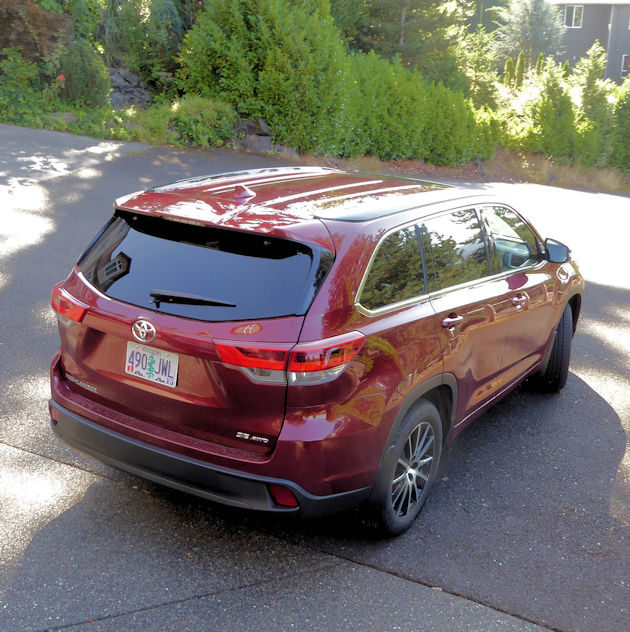 The well-equipped Highlander SE we drove had several important features that made the drive much more pleasurable and safer. We especially enjoyed features like the Dynamic Radar Cruise Control system that keeps the car at a fixed distance from the vehicle you are following and Blind Spot Monitor which were especially helpful on the crowded Seattle freeways. In the racetrack parking lot, we were thankful for the Front and Rear Parking Assist. 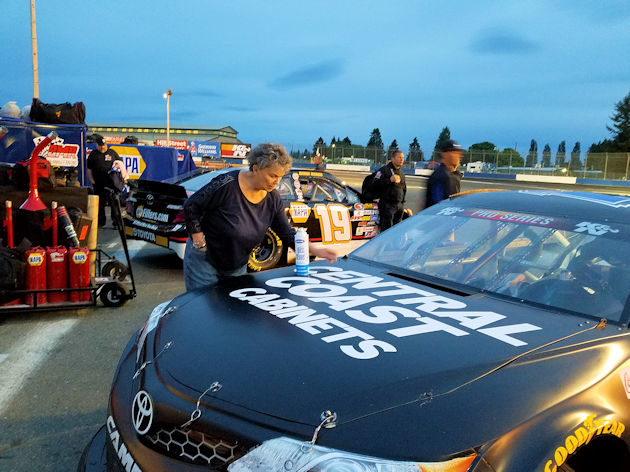 We made excellent time enroute to the race and enjoyed the 150-lap event. Todd started 11th and finished 8th in the exciting highspeed event which was run at average speeds near 100 mph around the five-eighths mile oval. He was disappointed, but we were thrilled that he raced well and safely.

We watched the race from the stands because you could not see the whole track from the pit area. After the race, we went to see Todd in the pits and ended up getting stuck in the infield for another four hours, as three other races were run. When we got back to the Highlander, it was nearly 11 pm, but we decided to make drive home. And, for the first time in nearly two months ? a record in the area ? it started to rain, and we drove home the entire distance in rain without incident and in comfort. The highland was very sure-footed and we especially appreciated the rain sensor wipers and automatic high beam controls.

The 2017 Toyota Highlander is impressive with its solid comfortable ride, good fuel economy and high level of safety and performance features. We can see why it?s one of the bestselling mid-size SUVs on the market. 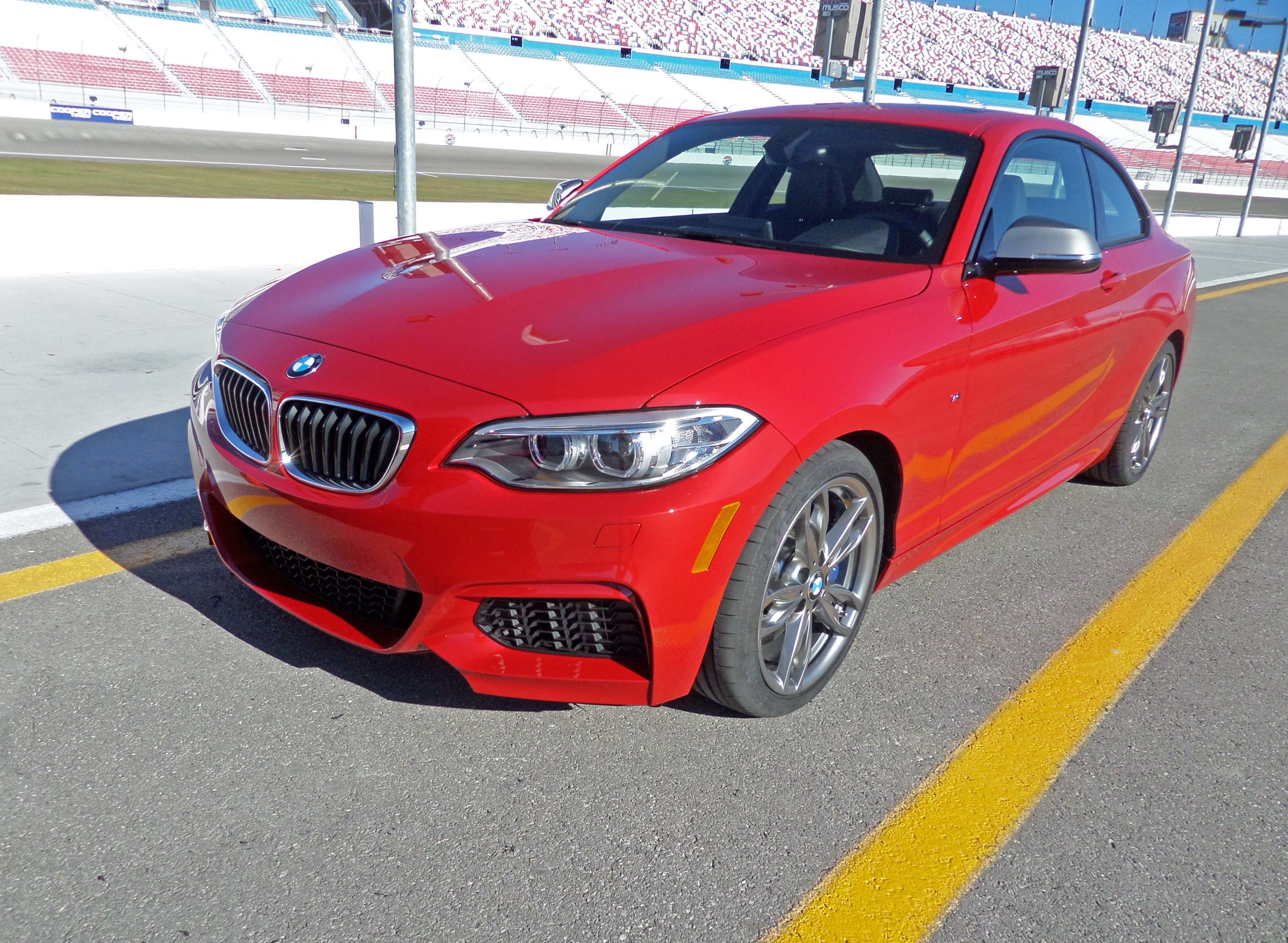 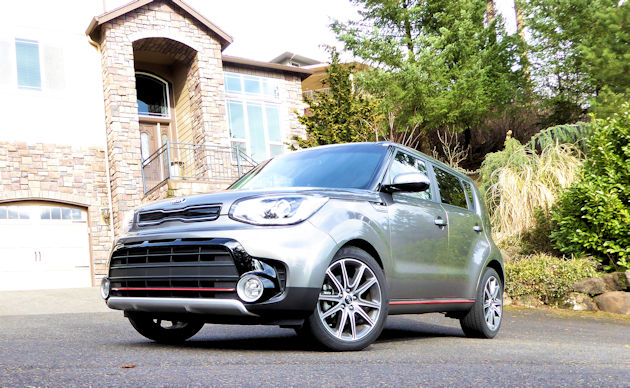