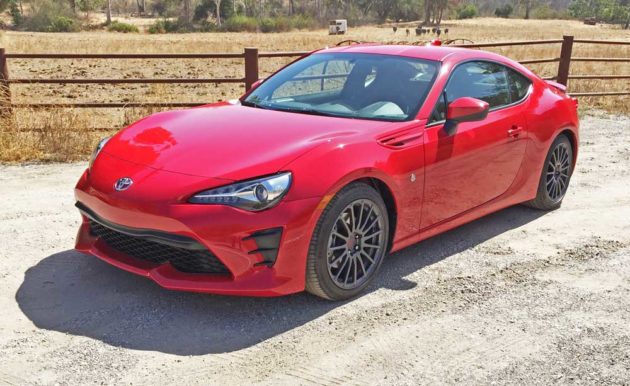 Two Japanese auto manufacturers joined forces three years ago (for the 2013 model year), developing a formidable, yet affordable sports coupe. The result was a most capable sports coupe that was extremely fun to drive under the guise of two distinctive marques. The vehicle or vehicles in question – the Scion FR-S and the Subaru BRZ, which were nearly identical in terms of design and mechanical composition. The two cars differed then (and still) only in the front and rear fascia treatment, headlamp styling and of course badging. 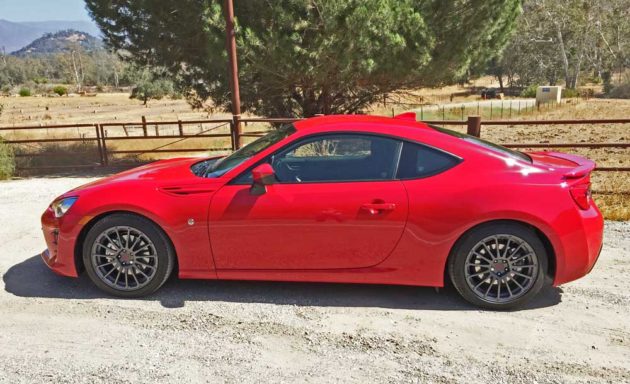 The Scion brand name has gone away, now carrying simply the Toyota moniker. The model designation has also disappeared, and what was the FR-S is now labeled the 86. We?ll deal here with the 2017 Toyota 86, which was originally the fifth model to join the old Scion family. Power is still delivered to the rear-wheels through either a 6-speed manual gearbox or a 6-speed electronically controlled automatic transmission with Sport mode, paddle shifters and Dynamic Rev Management. The power source continues as an FA2O 2.0-liter DOHC, 16-valve, flat horizontally-opposed ?boxer? four-cylinder engine with D4-S (Direct and Sequential Port Injection) that cranks out 200 horses at 7,000 rpm, while developing 151 pound feet of torque in a range from 6,400-6,600 rpm in automatic transmission-equipped 86s or 205 hp and 156 lb.ft for models with the 6-speed manual gearbox. Premium fuel is required. 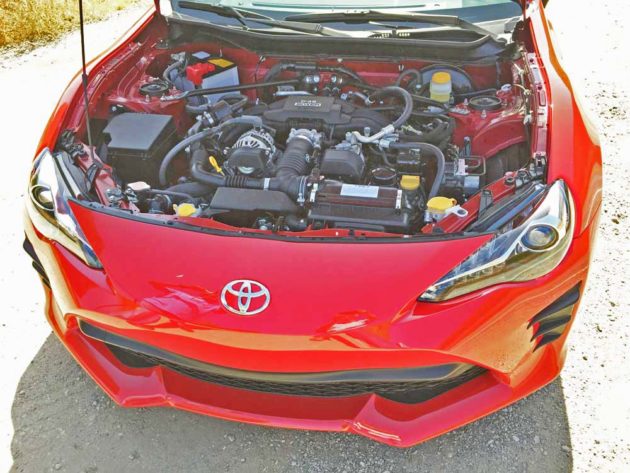 FR-S stood for – Front-engine, Rear-wheel drive, Sport). The FR-S drew from a long history of Toyota performance cars and motorsports. It was most inspired by the AE86 generation of the Corolla, best known as the Hachi-Roku, meaning ?8-6? in Japanese. The AE86 was a front engine, rear-wheel drive, lightweight, well-balanced coupe that made it a prime choice of driving enthusiasts. The car was designed around the core goal of achieving ?Pure balance?, beginning with the strategic utilization of a flat boxer engine in a front-engine, rear-wheel drive configuration. The engine?s compact size and flat shape allows it to be mounted in a low, mid-ship position, resulting in a dynamically favorable front-to-rear weight ratio of 53:47 along with a low center of gravity that is comparable to many exotic supercars.

Despite its powerful 100-horsepower per liter, the 86 delivers an estimated EPA rating of 24 mpg in city droving and 32 mpg on the highway with the 6-speed manual transmission.

The 86 tips the scale at 2,758 pounds with the manual and 2,806 with the automatic. Weight is kept to a minimum by the implementation of an aluminum hood, a solid roof and by a trunk rather than a hatch design. 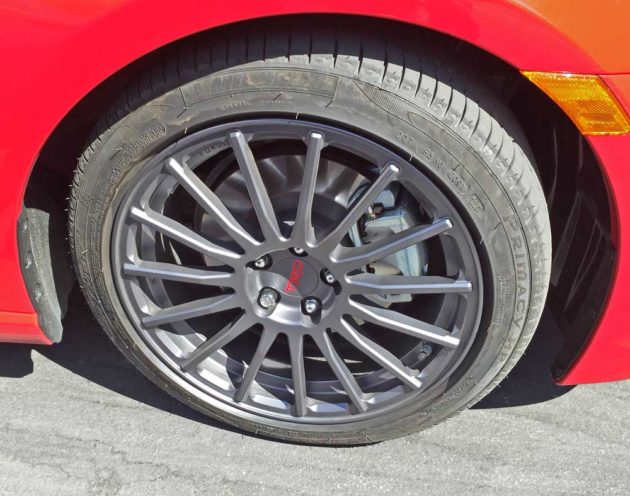 The low weight is complemented by dynamically tuned suspension componentry consisting of MacPherson struts forward and a double wishbone setup aft. Positive steering feel is provided by Electronic Power Steering and the 86 rides on lightweight 17×7-inch alloy wheels. Ventilated disc brakes are standard at all four corners. Experienced performance driving enthusiasts will appreciate the Vehicle Stability Control and Traction Control systems, which may be set in a combination of five configurations. 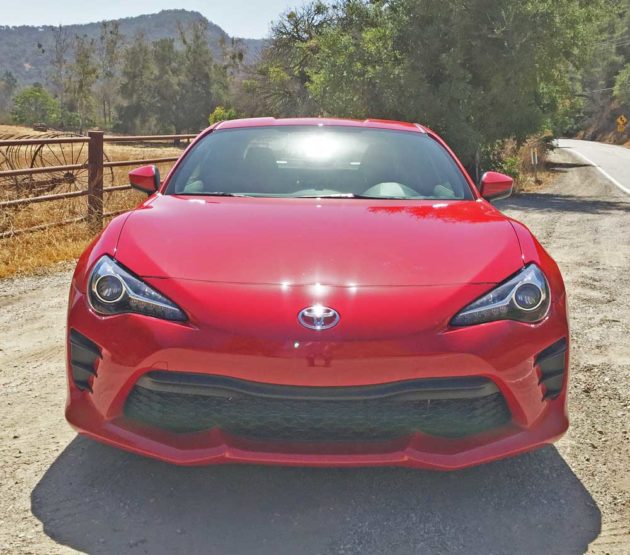 In terms of its stunning exterior visual appeal, the 86 reflects its inner power – its aerodynamic profile was inspired by the iconic (and now extremely rare and highly collectible) Toyota 2000GT, with a low, sleek roofline that directs airflow cleanly and efficiently over the gracefully curved cabin. The stance is low and the face delivers a menacing competitive look with its sharp expressive lines and forms, such as the wide lower intake and angular headlight assembly that houses projector-beam headlamps. The front fenders protrude aggressively upward, and display the iconic ?86? piston badge, highlighting the car?s AE86 DNA as well as its boxer engine. Moving to the rear, the fascia sits low and wide, with a diffuser panel that encases the sporty dual exhaust system. LEDs showcase the edgy taillamps along with center-mounted backup lights. 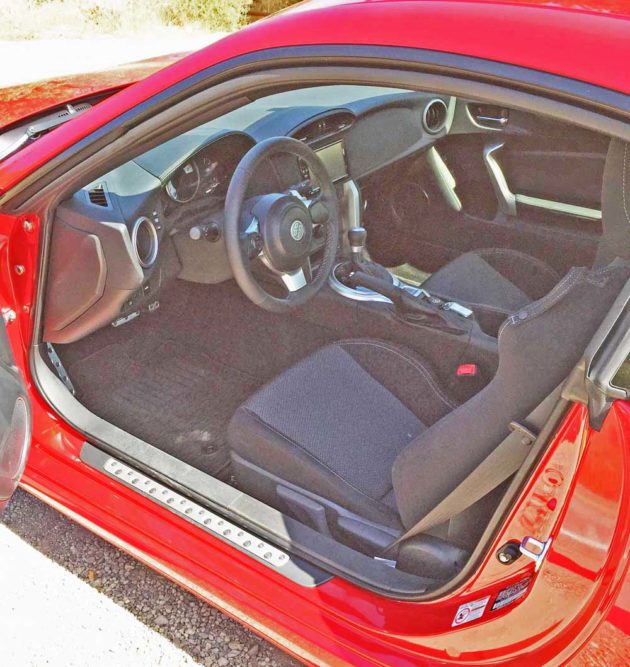 The interior features 2+2 seating with deeply bolstered, supportive and comfortable seats up front, with a rear seatback that folds flat for added versatility and functionality. A large, center-mounted tachometer is the focal point of the three gauge main cluster that also features a programmable shift indicator, allowing the driver to set rev limits in 100 -rpm limits beginning at 2,000 rpm. Speed is measured by both digital and analog gauges. The three-spoke steering wheel both tilts and telescopes and wears the new 86 model designation.

A soft skin dash cover delivers a flat horizon design with a raised centerline rib, which in combination with the pronounced front fender bulges aid in keeping the driver intuitively oriented with the car?s position. The 86 offers a connected multimedia audio system called BeSpoke?, powered by Pioneer?s Zypr?. 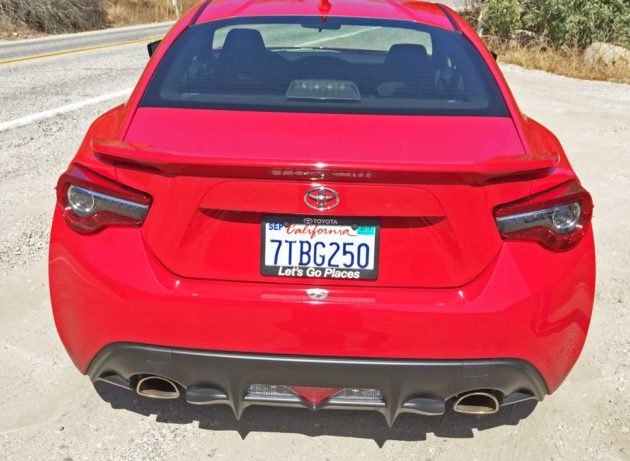 My test 2017 Toyota 86 sport coupe wore an exterior finish of Ablaze Red with a Black interior. The base sticker was set at $26,375., which came to $32,881 after adding a host f TRD (Toyota Racing Developmen) goodies and other options. The list of available options for personalization and customization of one?s 86 is most impressive.

SUMMARY: Considering the starting price point of the 2017 Toyota 86 sports coupe, and its performance credentials, it continues to be a winner, with its enhanced tuning and freshened appearance to match. It serves up an attractive and appealing design, with harmonious and well-balanced lines and contours, evoking a bold, athletic image even when parked.

Acceleration is most impressive, as are the precise handling characteristics. The ride quality is comfortable, but exceptionally firm for the sake of stability. 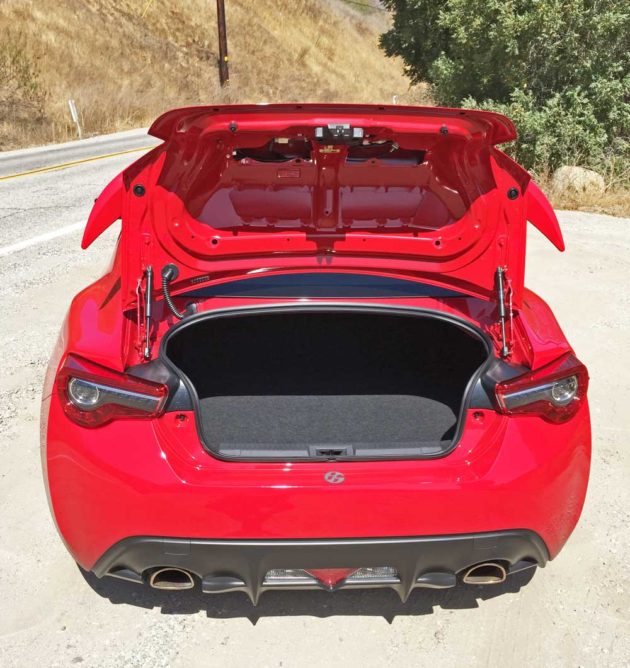 No longer a Scion and now under the Toyota nameplate, the 2017 86 2+2 sport coupe delivers fun in spades under normal driving conditions or on a racecourse with an almost unbelievably affordable starting price. Add to that, Toyota?s warranty program structure along with their reputation for reliability and the 86 is a no-brainer for the 2+2 sports coupe set. 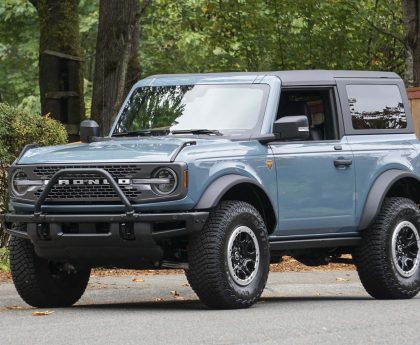