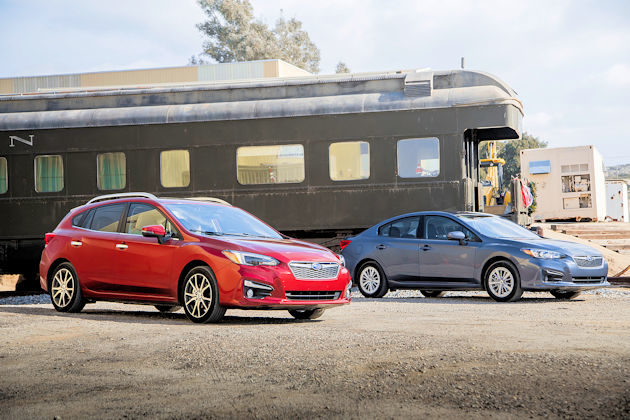 La Jolla, Calif. ? Subaru Impreza is going through a metamorphosis, from an all new platform and design to a new manufacturing facility. Now the latest generation of the Subaru Impreza is arriving at U.S. Subaru dealers, and, for the first time, not arriving by ship. They are being built in America at Subaru?s $1.3 billion Lafayette, Ind. plant.

As a company, Subaru has been doing very well, breaking sales records for the last 60 consecutive months. We suspect their great reputation for value and dependability, along with some great advertising, has been responsible. On the other hand, styling has never been Subaru?s strength, but the 2017 Subaru Impreza has changed that with its all new design ? it could be a contender in a compact car beauty pageant. 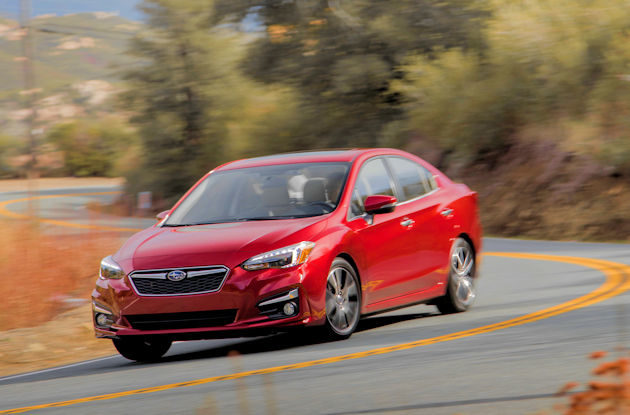 Available as either a four-door sedan or the five-door Sport model, the 2017 Subaru Impreza design language starts with the signature hexagonal grille and hawk-eye headlights leading back to a sculptured body. Strong wheel arches and a wedge-shaped body give both models an aggressive, athletic look. The new cars are 1.6-inches longer, 1.5-inches wider and ride on a one-inch longer wheelbase. The height is lowered slightly to improve aerodynamics. Taken all together, the added inches translate to a roomier cabin inside and an impressive new exterior. 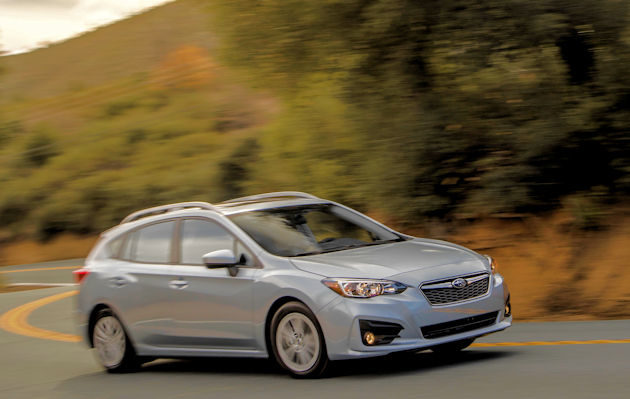 Built on Subaru?s all-new Global Platform, this new generation Impreza is 70 percent stiffer than the previous version. That enhanced rigidity not only improves handling characteristics and safety, but also when combined with innovative insulation helps significantly cut interior noise. The Global Platform will get a supporting role in several upcoming models. 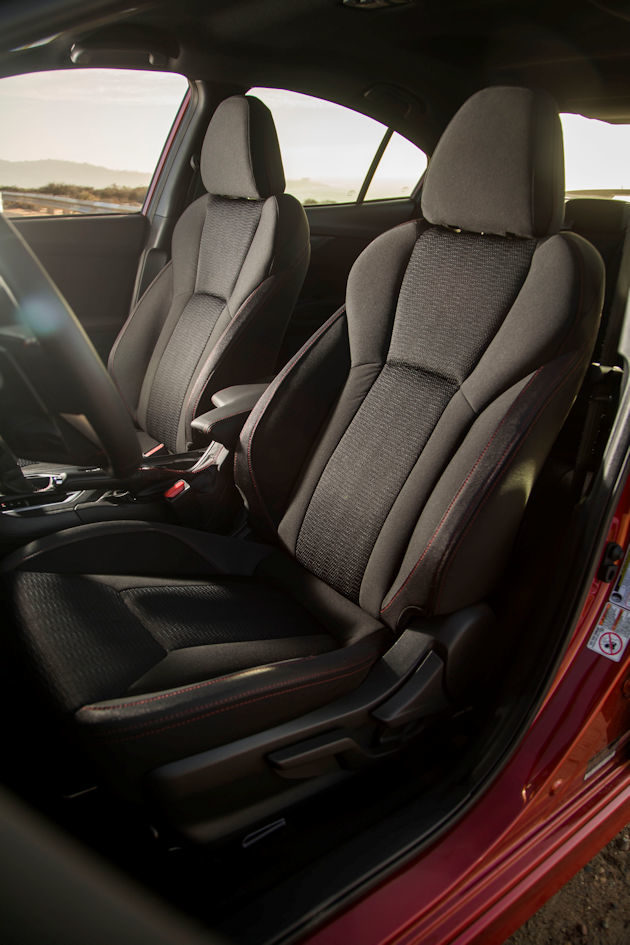 The more spacious interior has comfortable seating for four, or five with three people squeezed into the rear. We like the large storage areas in the console and doors, but the best feature of the new Impreza is the controls and displays. At the top of the center stack is a small horizontal screen that displays climate and functions of the EyeSight Driver Assist system. Next down the stack is a large screen for navigation and infotainment, and at the bottom are simple climate controls. Rather than succumbing to pretty, but often awkward to use touch controls, Impreza designers kept user-friendly dials and buttons for basic audio and climate controls. The steering wheel also has redundant controls for several operations, along with the active cruise settings which are a part of the EyeSight? System. 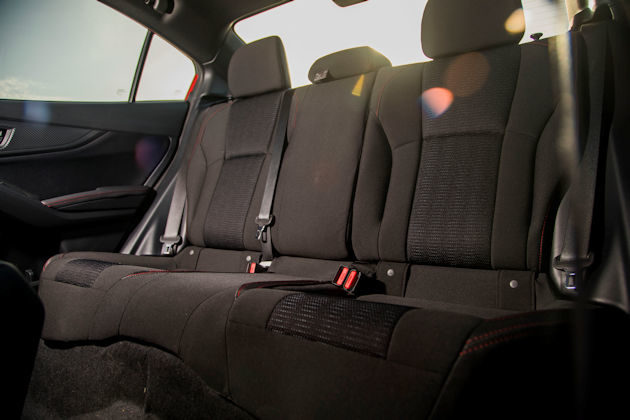 The optional EyeSight system, which uses stereo cameras mounted on either side of the rearview mirror for the Adaptive Cruise Control, Automatic Pre-Collision Braking, Lane Departure, and Sway Warning along with Lane Keep Assist. The system also includes Blind Spot Detection with Lane Change Assist, Rear Cross Traffic Alert, and Reverse Automatic Braking. We think the EyeSight system is one of the best driver assist systems in the business. It?s available in all the models and as part of a variety of option packages that vary with the trim level. 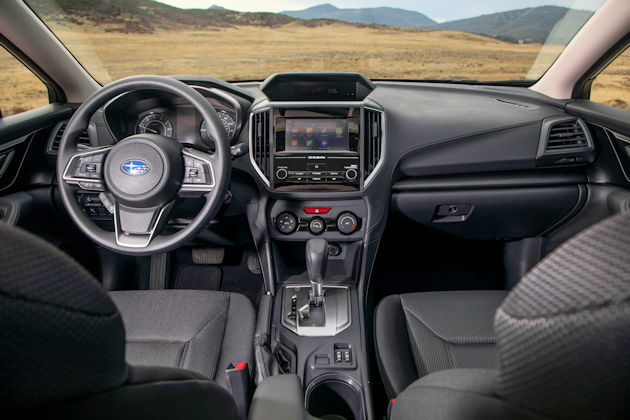 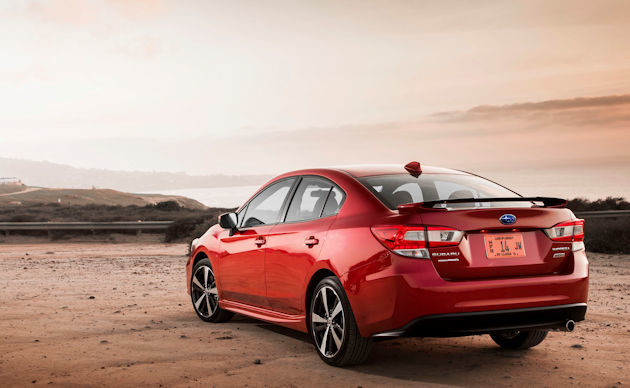 Early in December we had a chance to drive both sedan and five-door versions the 2017 Subaru Impreza. As we left the beautiful seaside town of La Jolla for a drive into the mountainous area just north of the Mexican border, the first thing we noticed was how quiet the new Impreza was. On curvy roads through the mountains the Impreza demonstrated an exceptionally flat ride and balance. It handles more like a sports car than an entry level sedan or wagon. 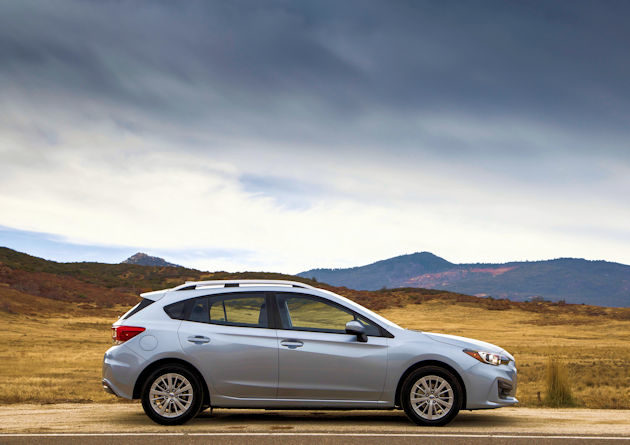 When it came to acceleration through, the Impreza was a bit on the weak side. Buff magazine testing lists a 0 to 60 mph time of 8.5 seconds. It?s fine for most driving conditions, but it required more passing time than we would have liked. Under the hood is Subaru?s famous four-cylinder Boxer engine (with horizontally-opposed cylinders). It?s rated at 152-hp, which is up four horsepower from the previous generation. If we could dream, we think the 170-hp 2.5-liter four cylinder or 250-hp 2.0-liter turbo engine out of Subaru Forester would be perfect addition, or at least nice options. The small engine and the CVT do a good job in the fuel economy department, scoring an EPA rating of 28 mpg city 38 mpg highway and 32 mpg combined.

During Subaru?s press conference, the question of what will happen to the Subaru WRX and WRX STI performance models, which were previously modified versions of the Impreza. Subaru officials indicated the WRX models would become part of a separate program. 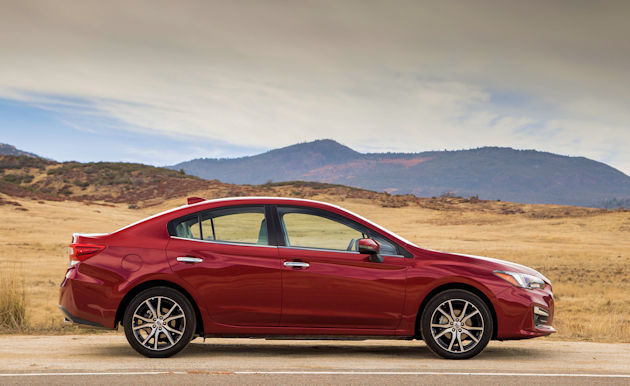 Of all the cars that now use a CVT (continuously variable transmission), the Subaru version is our favorite. Normally we don?t care for a CVT because they tend to be too vague or lack a positive feel. The Impreza CVT has gear-like steps which simulate a seven-speed automatic. Plus, it has steering wheel-mounted paddle shifters that allow the driver to temporarily down shift from Drive for a corner, for example, to maintain better throttle control and engine braking. The driver can also move the console-mounted shifter to the left from Drive to a manual position and the gear-like positions will be held, rather than reverting to Drive. 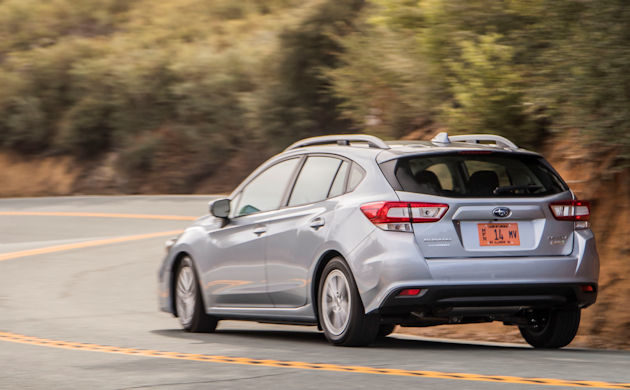 Like all Subaru models, except for the BRZ sports car, the Impreza has standard Symmetrical all wheel drive. The active AWD system uses an electronically continuously variable transfer clutch that adjusts the torque split based on acceleration, deceleration and available traction. The system also has Active Torque Vectoring which applies torque to the outside rear wheel during cornering for better handling. 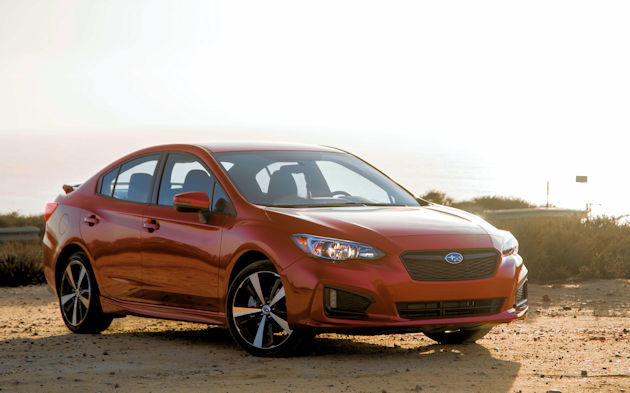 The 2017 Subaru Impreza is offered as a sedan or five-door sport model in four trim levels: 2.0i base, Premium, Sport and Limited. Prices starts at $19,215, including the destination charge, for the 2.0i base Sedan with a five-speed manual transmission. (The manual transmission is only available on the base model. The CVT is a $1,000 option on the base and standard on all other trim levels.) The five-door version is only $500 more than the sedan at each trim level. The most expensive Impreza is the 2.0i Limited five-door, which is priced at $25,415. With all the available options, the price peaks at $29,620. 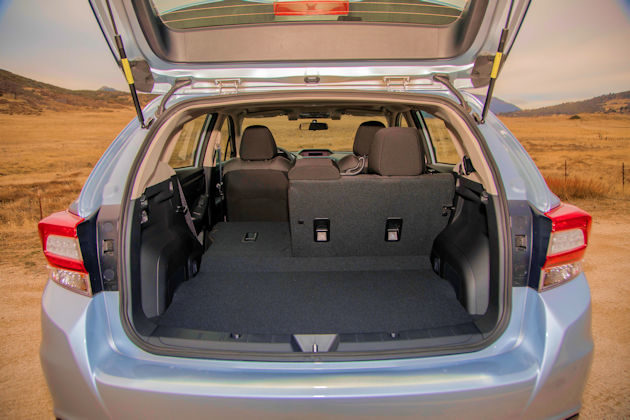 The 2017 Subaru Impreza goes to the head of the compact sedan and five-door class. It looks great, handles beautifully, has outstanding features and standard AWD is a big plus. The only thing we could ask for is a bit more power. 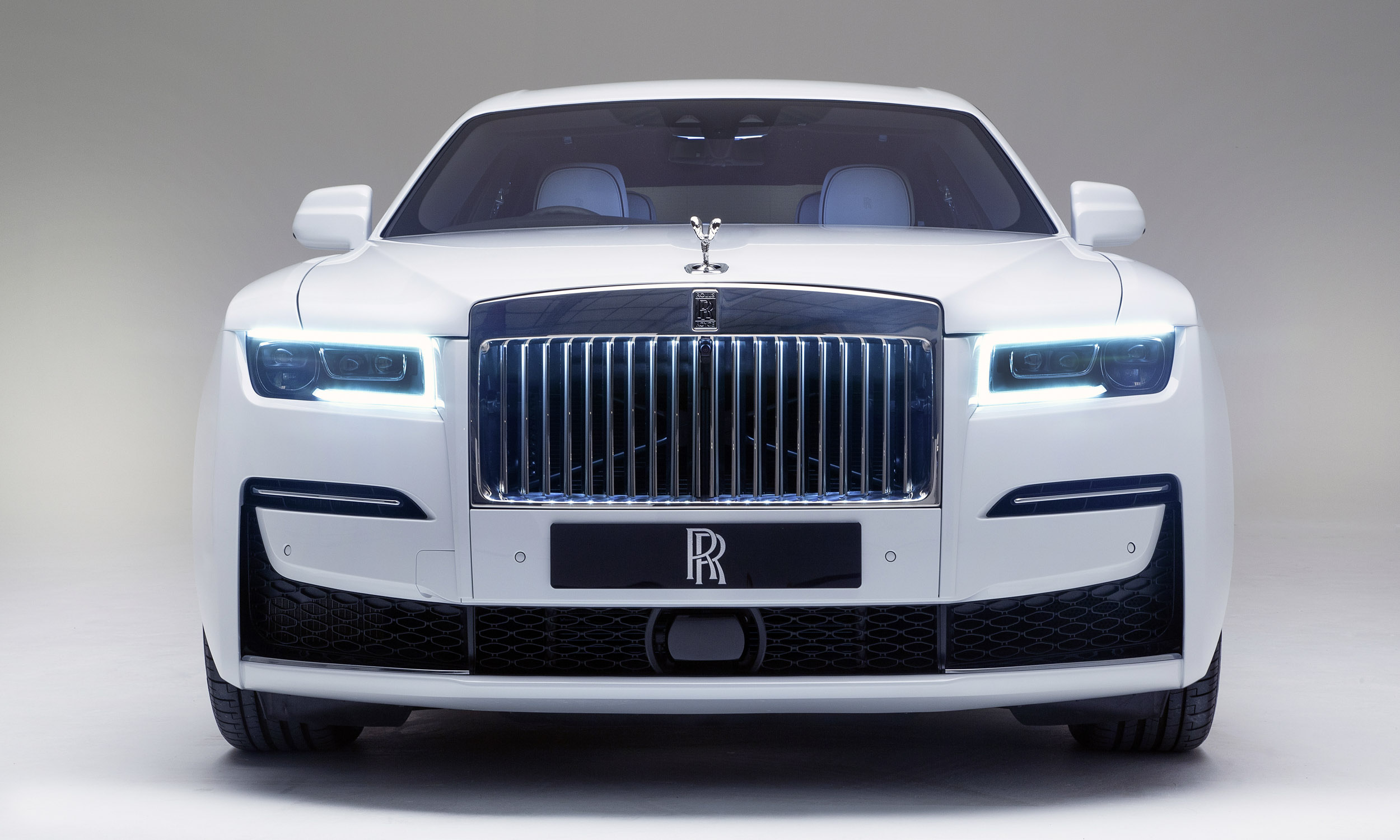