Road trip ? Typically we don?t think of an SUV as a good road trip vehicle, that would be the bastion for something like a luxury sedan or maybe a crossover. However, over the years the once hard edge of many SUVs has soften to a more passenger-friendly demeanor often along with adding enhanced off-road capabilities. Plus, we all know that most SUVs never make it beyond gravel they are more for rocks.

To test he road trip capabilities, we recently gave the 2017 Nissan Pathfinder Platinum 4WD a good workout on a trip from our home near Portland, Ore. to Western Montana and back. 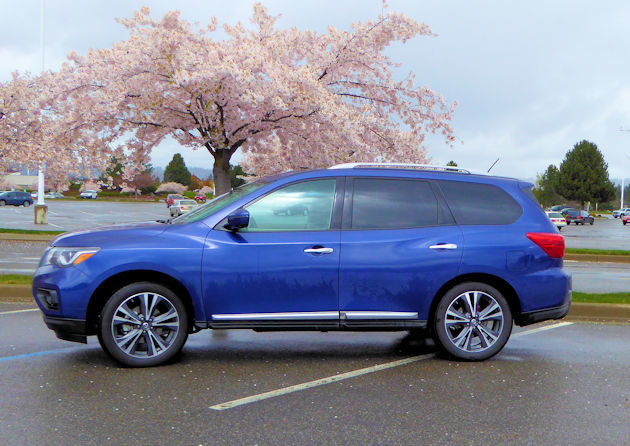 The appeal of the Platinum edition is the full feature content and luxurious appointments which included most of our ?must have? hi-tech safety features including Intelligent Cruise Control, Blind Spot Warning, and Rear Cross Traffic Alert. 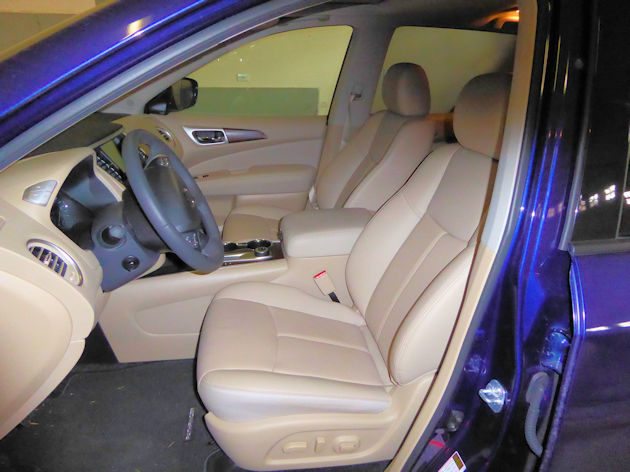 The comfort and convenience features are the icing on the cake for a road trip car and the Platinum edition is loaded with them with everything from heated and cooled front seats (heated in the rear), heated steering wheel, remote engine start, motion-activated liftgate, Around View? Monitor with Moving Object Detection, Nissan Connect, SirusXM Satellite Radio and dozens of other features to pamper the driver and passengers. 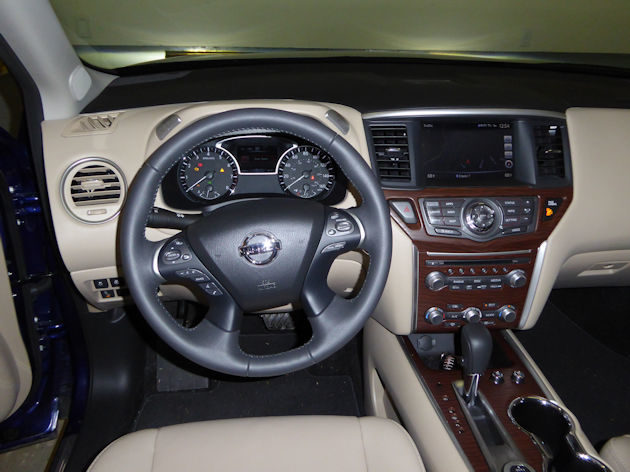 Our Platinum Edition Pathfinder included the NissanConnect with available navigation system and an 8.0-inch touch screen monitor mounted high and in the middle of the center stack. The NissanConnect system with its 8.9-inch screen is standard on all trims and includes Voice Recognition for audio, Bluetooth? and vehicle information. SiriusXM? Travel Link and the navigation is available on all models but the S and is standard on the Platinum level. It includes three years of complimentary links to sports, movie listings, stock prices, gas prices and weather. The system also has automatic collision notification, emergency call and stolen vehicle locator, customizable alerts, dealer service scheduling and maintenance alerts. 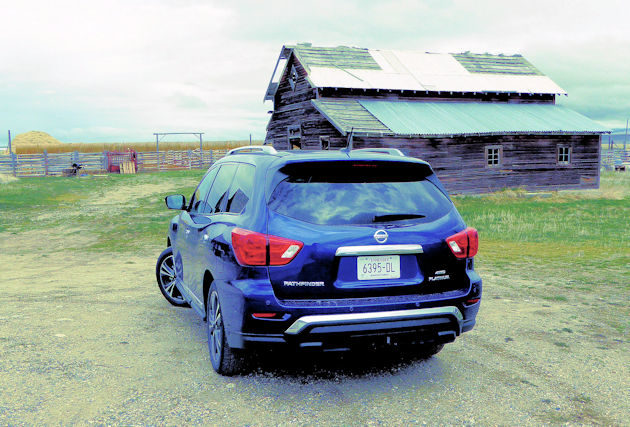 Part of our road trip ritual is listening to audio books from Bill?s smart phone using a Bluetooth connection. The Nissan?s system was easy to connect and always started right up without having to fumble to get the book started again after a stop. 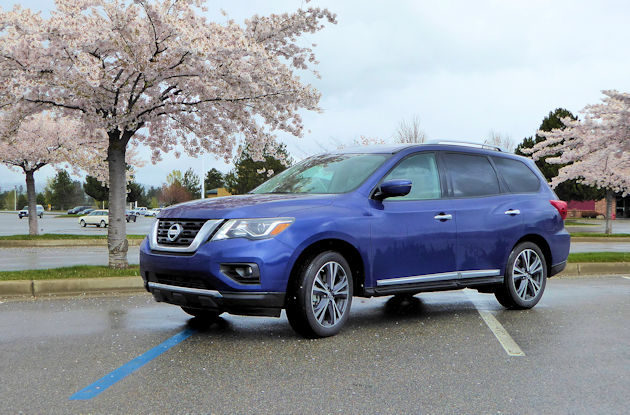 Under the hood of all Pathfinders is a 284-hp 3.5-liter V-6 engine with direct injection, DOHC and Variable Valve Timing. It?s attached to Nissan?s Xtronic CVT (Continuously Variable Transmission). Normally we don?t care for a CVT, but this one is the best of the breed. We never had that feeling that the engine was attached to rubber bands. It always felt quite positive and even produced very good acceleration and passing power. The good performance was important on Montana mountain passes and on the highways where traffic flows at 80 to 85 mph?the speed limits are 80 mph on most of the interstates and even 70 and 75 on two lane state highways. 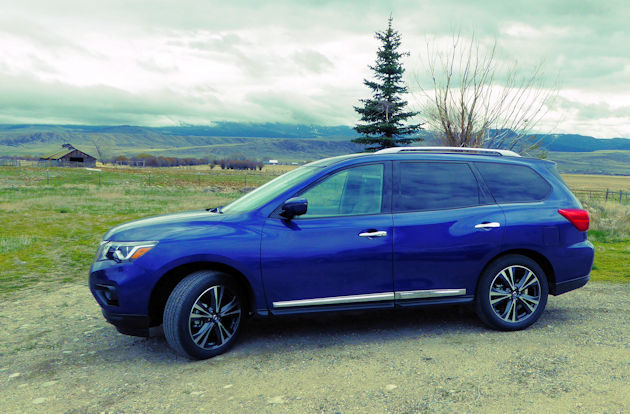 Buff magazines indicated a 0 to 60 mph time of 6.5 seconds for the Pathfinder, and the EPA lists a fuel economy of 19 mpg city, 26 mpg highway and 21 mpg combined. We averaged 25.1 mpg on our trip, even with the higher speeds. The front-wheel drive version is rated about one mile per gallon better than the 4WD. 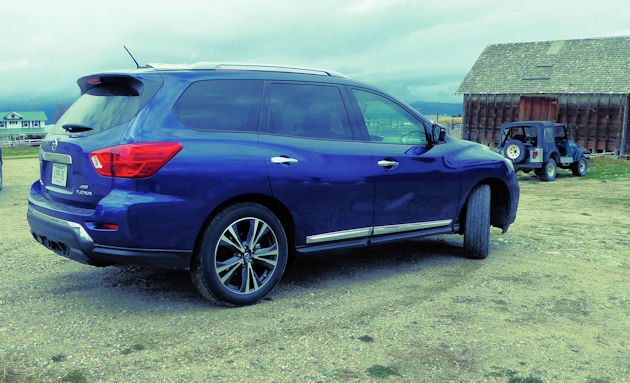 The Nissan uses an intuitive four-wheel drive system with selectable two-wheel drive, automatic or 4WD lock settings. It also has vehicle dynamics control, Hill Start Assist and Hill Descent Control. We didn?t have an opportunity to go off road in the Pathfinder this trip but found it to be very capable on previous excursions off pavement. The latest version tows up to 6,000 pounds when equipped with the optional towing package, which makes it capable of pulling a small boat, travel camper or an adult toys trailer. 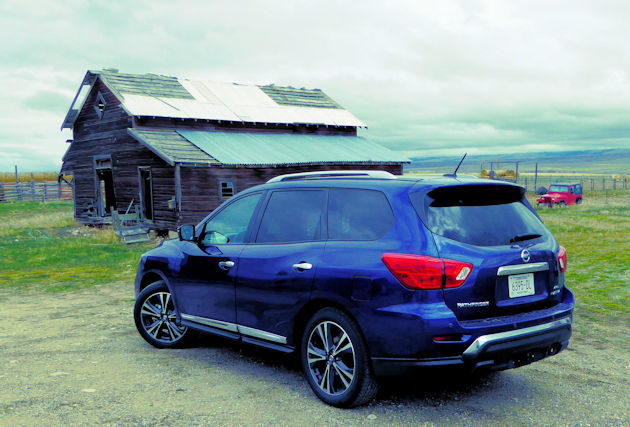 The Pathfinder received a major redesign in 2014 and for 2017 it was refreshed with a more aggressive exterior styling, along with an increase in engine power and towing capability. The redesign includes a new more truck-like front end with Nissan?s signature boomerang-shaped headlights and Daytime Running lights. LED headlights are available and are standard equipment on the Platinum and Midnight Editions. 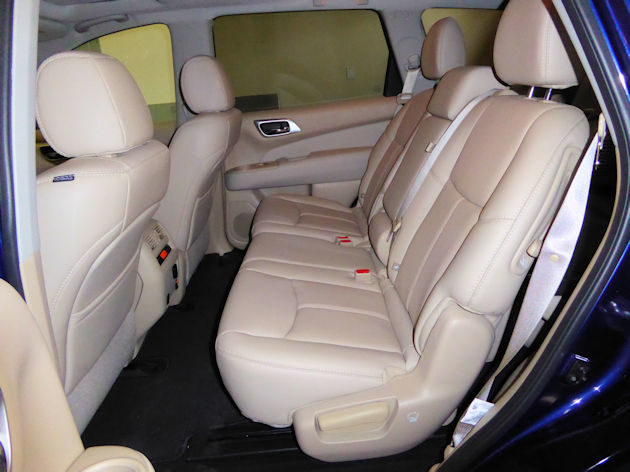 When needed the Pathfinder offers seating up to seven passengers and the third row is readily accessible with Nissan?s innovative EZ Flex Seating with Latch and Glide?. The second row tilts and glides forward allowing easy 3rd row access even with a child safety seat remaining securely in place on the passenger curb side.
With all three rows in place there is 16.0 cubic feet of cargo space, or about as much space as a mid-size sedan trunk. When it?s not needed the seat folds into the floor leaving 47.8 cubic feet of cargo space, and with the second-row seats folded there is 79.8 cubic feet. 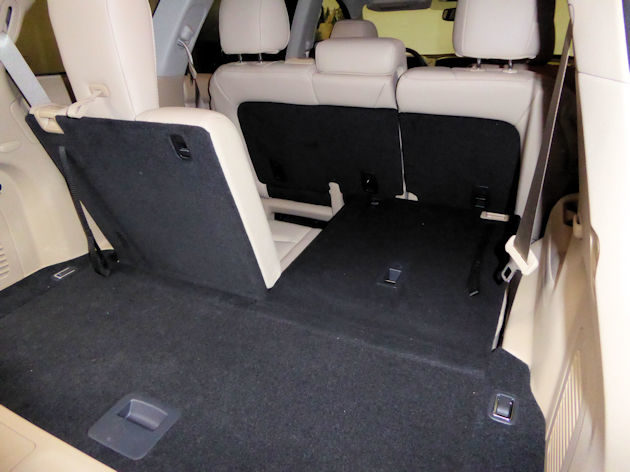 Pricing for the 2017 Nissan Pathfinder starts at $31,230, including the destination charge, for the FWD S trim level and goes up to $44,700 for the 4WD Platinum trim. Other than a few available factory and port installed accessories, the Platinum has every feature included as standard equipment. Four-wheel drive adds $1,690 on all models and the Midnight trim package on the Platinum is special priced at $1,195.

The Nissan Pathfinder has been around more than 30 years now and has proven to be a dependable and enthusiastic SUV, we also found it to be a very good road trip vehicle ? comfortable, quiet, powerful, and relatively economical. 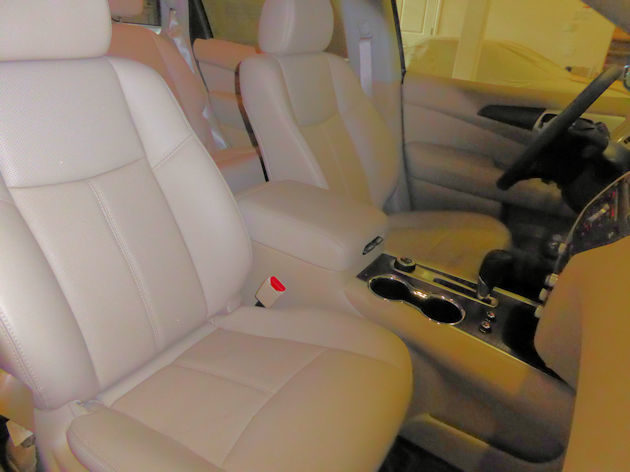 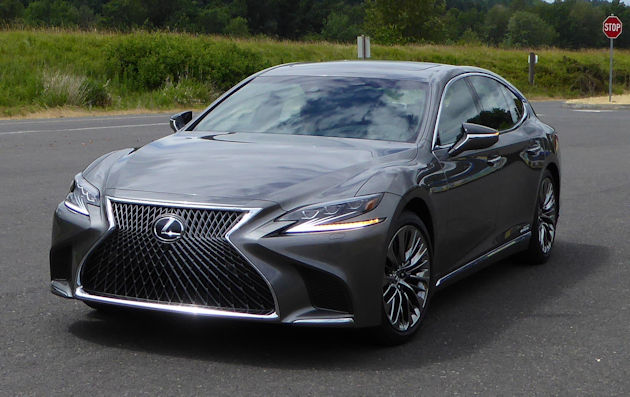 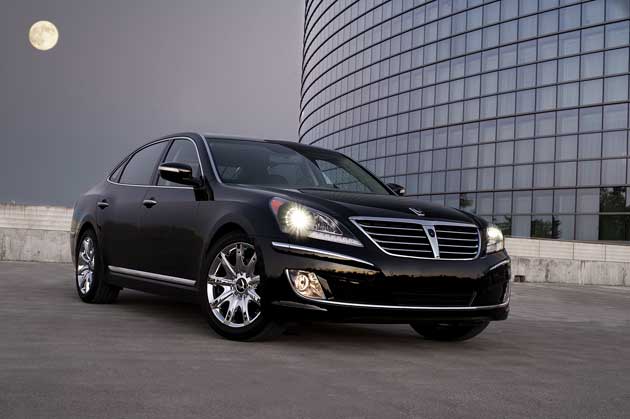