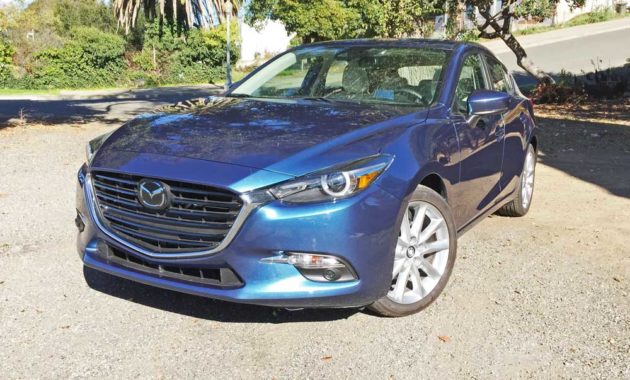 The Mazda3 continues its role as the Mazda brand?s most recognizable nameplate. It was the first vehicle in North America to launch Mazda?s breakthrough engineering and manufacturing philosophy SKYACTIV?1 TECHNOLOGY in 2012 that continues in the 2017 Mazda3 GT. 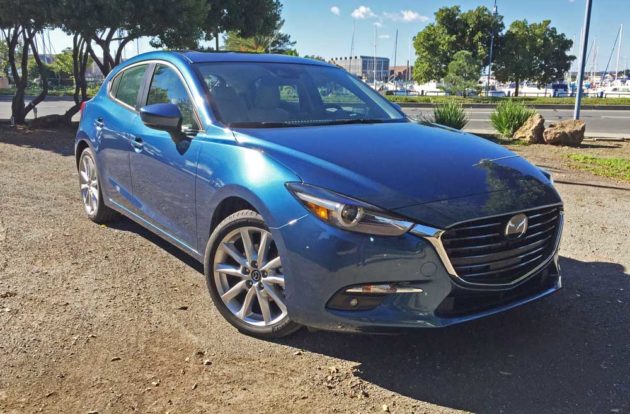 The Mazda3 is engineered with the full complement of SKYACTIV technologies, Mazda’s proprietary suite of fuel-efficient, performance-driven components and manufacturing philosophies along with a complete KODO (?Soul of Motion?) structure, while offering active safety technologies such as i-ACTIVSENSE and introducing a ?heads-up? HMI/infotainment system dubbed MAZDA CONNECT?. 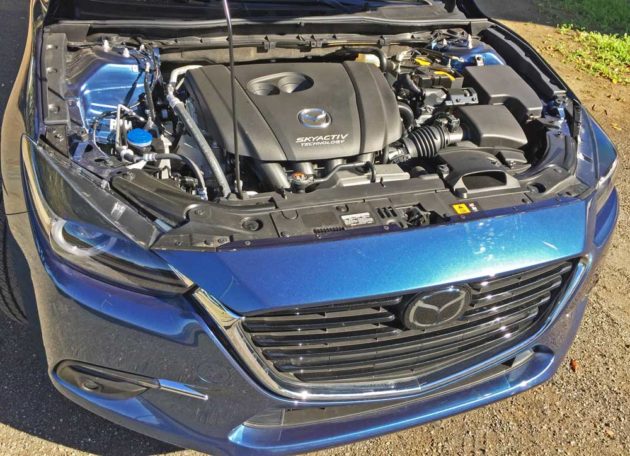 The 2017 Mazda3 is available in a four-door sedan and a five-door hatch body configuration. Two engines are available: a 2.0-liter SKYACTIVE-G four-cylinder that delivers 155 horsepower at 6,000 rpm, while developing 150 pound feet of torque at 4,000 rpm; and a 2.5-liter, DOHC, 16-valve SKYACTIVE-G four-cylinder with Variable Valve Timing that makes 184 horses at 5,700 rpm while generating 185 pound feet of torque at 3,250 rpm.

The 2017 Mazda3 returns refined and repackaged with added standard content,
including G-Vectoring Control, a Mazda-exclusive technology that uses the engine to refine steering and handling to match the driver?s inputs, and enhanced sound insulation to complement Mazda3?s redesigned, upscale interior. The Mazda3?s trim levels have been simplified – for those seeking the engagement of a manual transmission will likely be happy to learn that the top-level, stick-shift Mazda3 Grand Touring is now available with the Premium Package and i-ACTIVSENSE suite of advanced safety technologies – features that were previously reserved for Mazda3 models equipped with the available automatic transmission. 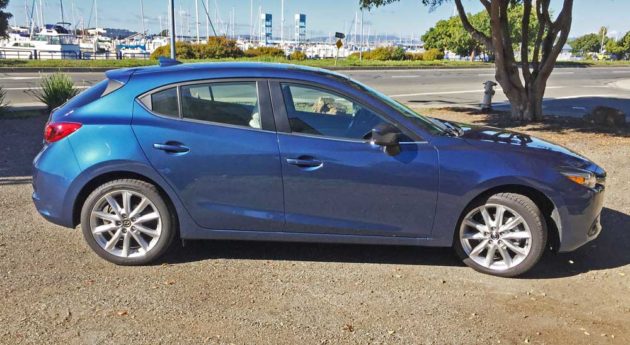 The 2017 Mazda3 is low and lean with a wheelbase of 106.3 inches, while the sedan remains 0.6 inches shorter in overall length at 180.3 inches than the 5-door model. Five-door models extend to a smaller 175.6 inches. With a height of 57.3 inches and a width of 70.7 inches, the Mazda3 reduced its overall height by 0.6 inches, while gaining 1.6 inches in its pronounced, but toned hips, all while retaining similar headroom space and providing comfortable rear legroom. Rear seatbacks were lengthened nearly 2.0 inches for added passenger comfort. 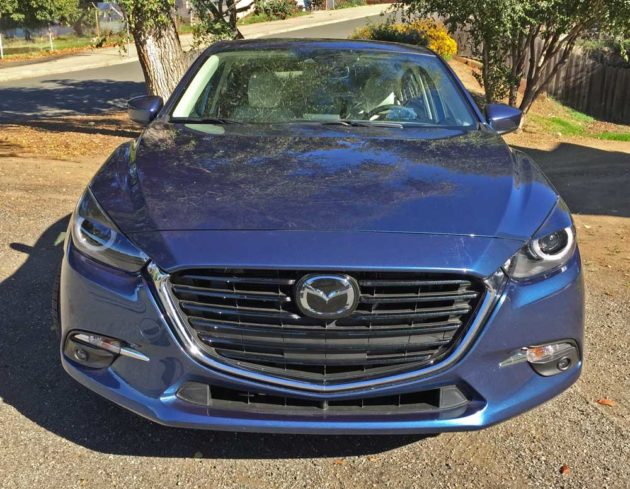 The cab rearward posture of the vehicle and its highly aerodynamic profile projects its agility. The new familial KODO design face creates a visual appeal from the dynamic signature wing of the five-point grille to the expansive hood cresting over sleekly slanted headlamps, and through the wide-stance muscular fenders that flex into taut character lines from panel to panel. Each chiseled feature serves a purpose, as both sedan and five-door models achieve a best-in-class coefficient of drag (Cd) at 0.255 and 0.28, respectively, when equipped with active grille shutters and i-ELOOP, a capacitor-based regenerative engine braking system to power all of a vehicle?s electrical components. The active grille shutters mounted in front of the radiator, automatically open and close in accordance with driving conditions, improving aerodynamic performance while contributing to real-world gains in fuel economy. 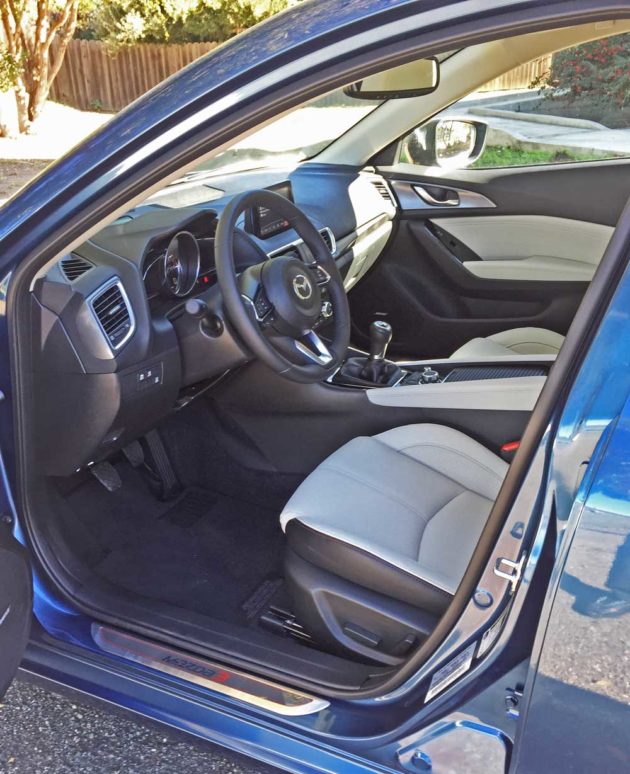 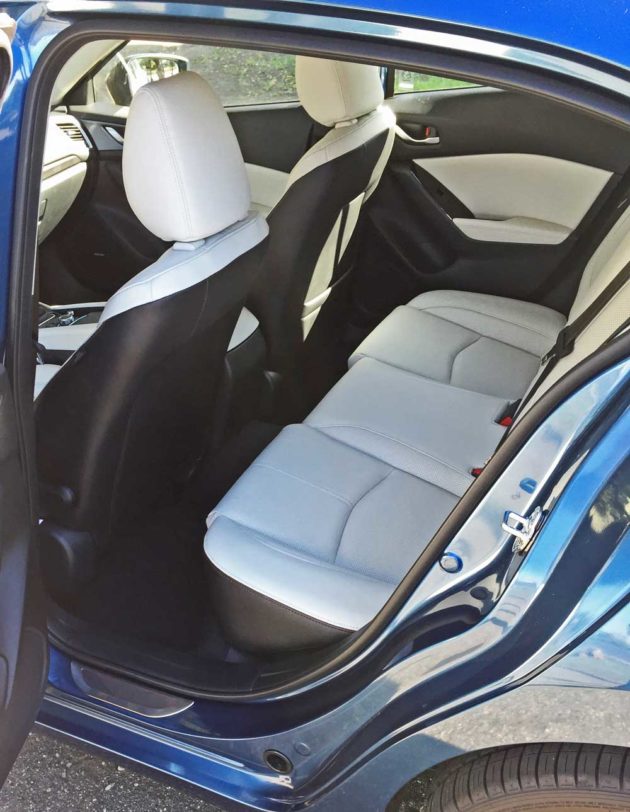 The A-pillars are set rearward, enhancing the range of vision for all occupants. Outside mirrors are mounted onto the doors instead of the industry-norm placement being at the base of the A-pillar post.

The 2014 Mazda3 was the first vehicle to feature Mazda?s Active Driving Display, which continues for 2017. It is a clear pop-up panel that is vertically mounted behind the hood to provide vehicle speed, navigation directions and other pertinent driving information directly within the driver?s line of sight. The Active Driving Display automatically folds back into a hidden position when the ignition is shut off. 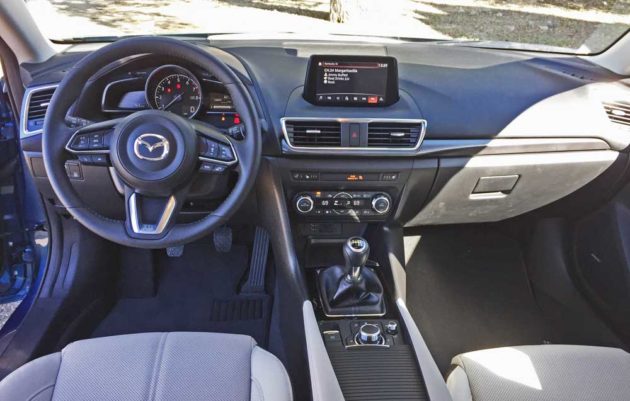 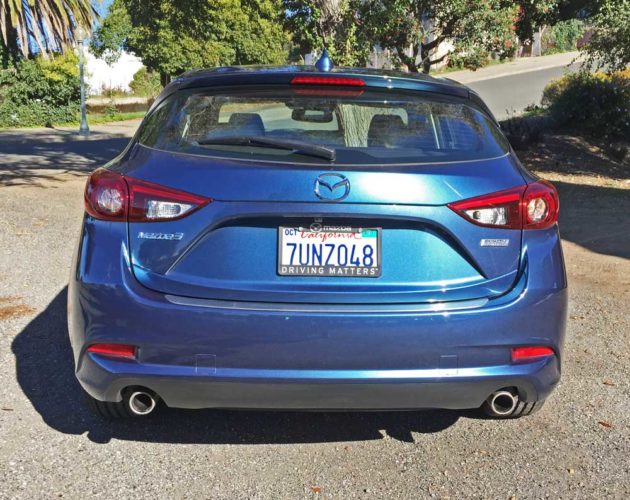 My test 2017 Mazda3 was a five-door model in Grand Touring trim, powered by the 2.5-liter SKYACTIVE-G four-cylinder engine, delivering power to the front wheels via the SKYACTIVE-Drive 6-speed manual gearbox. The exterior was finished in an Eternal Blue Mica (metallic), complemented by a Parchment and Charcoal-toned interior. The base price was set at $23,895 while optional features and equipment elevated the final sticker price to $27,730. 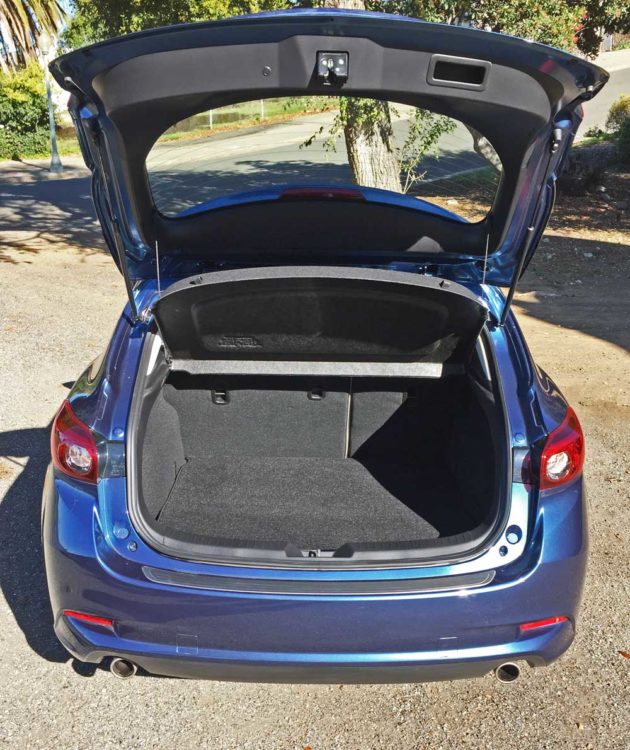 SUMMARY: This latest iteration of the Mazda3 Grand Touring continues as a delight and stimulates the senses. The Mazda3 was always fun to drive, with the 2.0-liter mill emitting an authoritative note, which some may relate to as ?buzzy?, but it?s anything but objectionable, while delivering more than adequate performance capabilities. The 2.5-liter engine obviously delivers more power without having to work as hard.

All Mazda3 vehicles equipped with a SKYACTIV-Drive six-speed automatic transmission feature a manual shift option but the Sport mode feature adjusts the shift mapping ? and to a lesser extent the throttle response ? to better match more spirited driving conditions, such as challenging twisty roads. The transmission holds gears longer and doesn?t upshift or downshift as much while manually shifting when carving through turns. For non-automatic transmission fans, the 6-speed manual gearbox is both smooth and precise while shifting in either direction.

The Mazda3 Grand Touring’s ride quality is very comfortable, neither too harsh nor too soft. There is however considerable road noise that a little extra attention in the NVH department would eliminate almost entirely.

The MazdaConnect system is quite convenient with its center console mounted rotary knob and three buttons, which may be operated by feel without taking one?s eyes off the road, since the information appears on the dash mounted screen. The Head Up Display can be programmed to provide speed and other safety system warnings, along with the Navi system?s speed limit posting, which turns yellow when nearing excessive speed and displays red when actually accelerating above the posted limit. 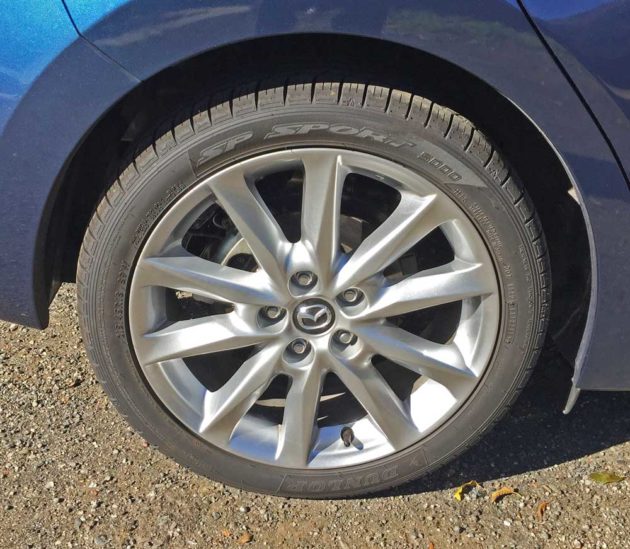 In the final analysis, the 2017 Mazda3 Grand Touring 5-door, while competing with several vehicles in the same class and price range, delivers an impressive package regardless of body configuration, powertrain and model, at a reasonable price, especially considering the content and level of available technology. The pick of the litter, is the 5-door powered by the 2.5-liter engine in Grand Touring trim. The automatic transmission is fine, especially in Sport mode, but the manual gearbox is more MX-5 Miata-like, better accommodating drivers who happen to be sportier in nature. In any case, there?s a 2017 Mazda3 vehicle available that should satisfy nearly everyone?s needs. 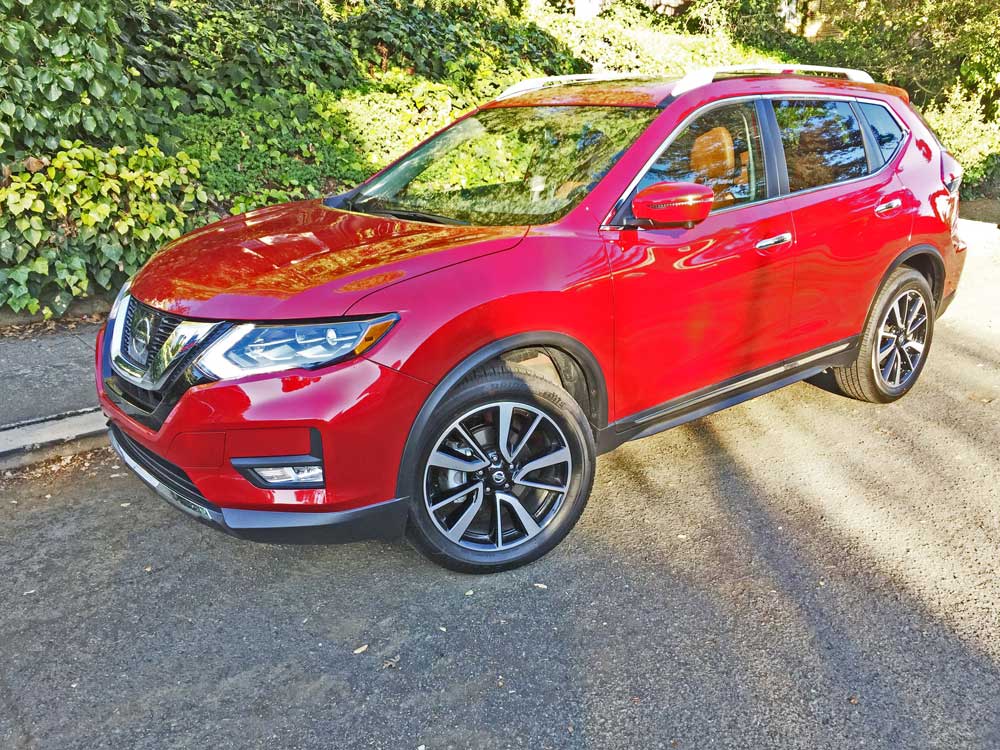 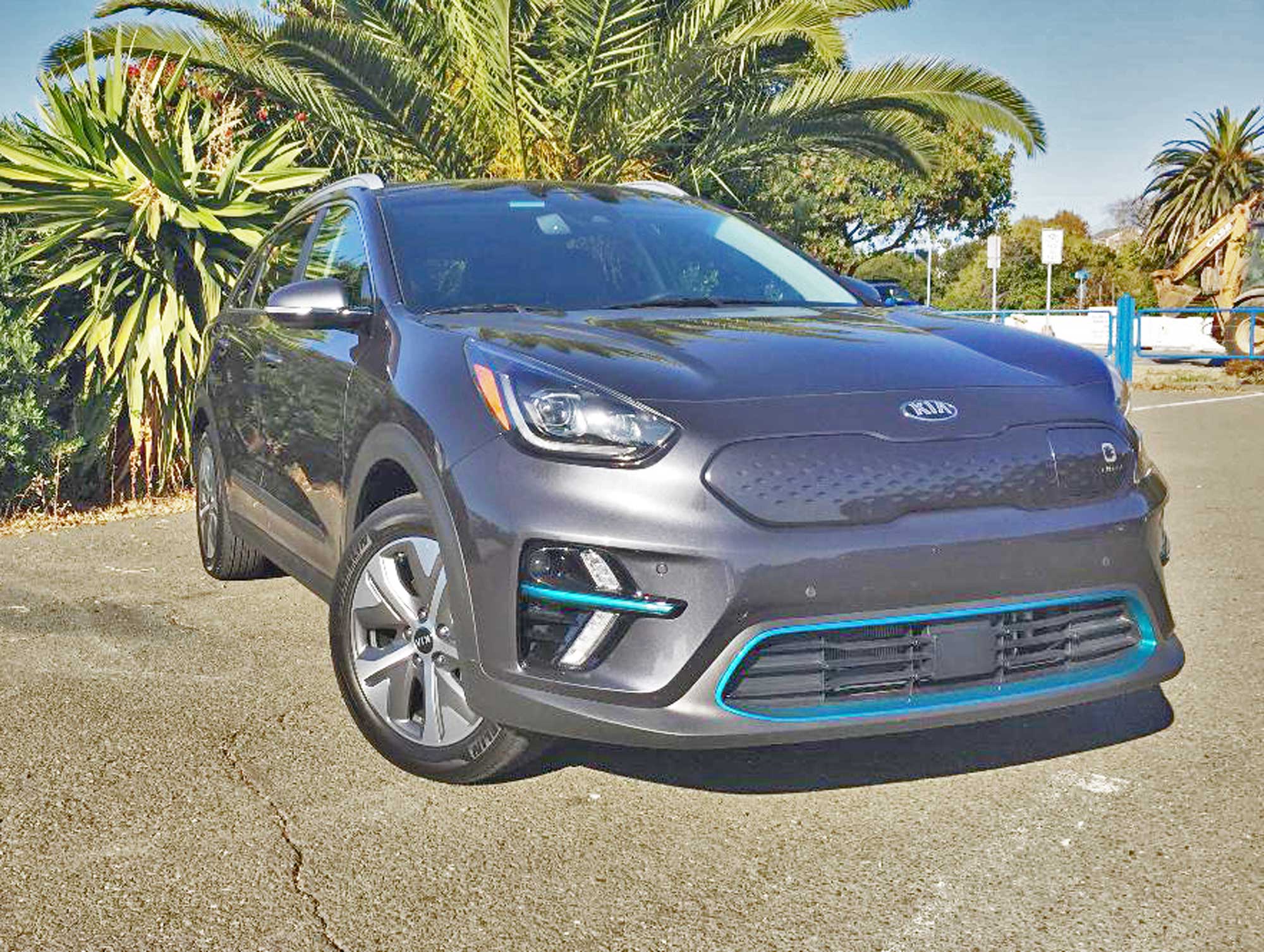