Sometimes when we drive a new car the second time, we find that it?s not as good as we originally thought, or that the latest offering of competitors has jumped ahead. That is NOT the case for the 2017 Mazda CX-9.

By looks alone, the Mazda CX-9 is a head turner with its sleek lines and distinctive Mazda grille. Mazda calls the look KODO ? ?Soul in Motion,? and that?s another one of the difficult to define Mazda expressions. Whatever it?s call, it?s a design we think will turn heads for years. 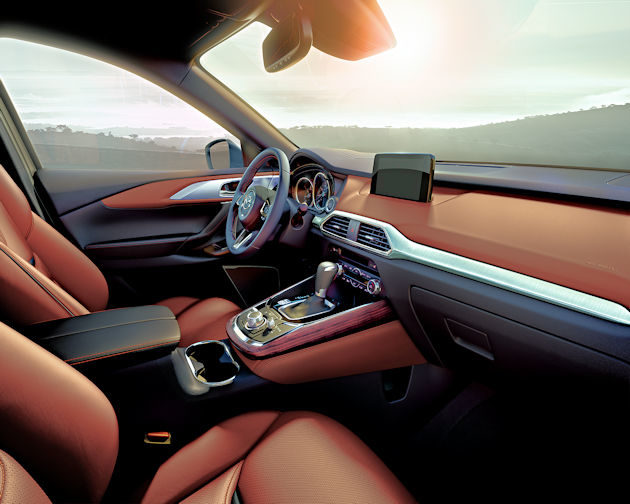 The interior of our seven-passenger test vehicle, a top-of-the-line Signature All-Wheel Drive CX-9, was luscious and looked much richer than the price would indicate. We were especially impressed by the Auburn colored Nappa Leather seating that is available only on the Signature model.
Every manufacturer has a signature control system for the infotainment system and Mazda?s is one of the easiest to use. It?s mounted to the rear of the console mounted shifter and has function-specific buttons to start the system where the driver wants to go (audio, navigation, etc.) and then there is a large control knob that makes selections from the menu on the screen that sticks out of the dash above the center console. Additionally, all the controls throughout the cockpit are well marked and have a quality feel. 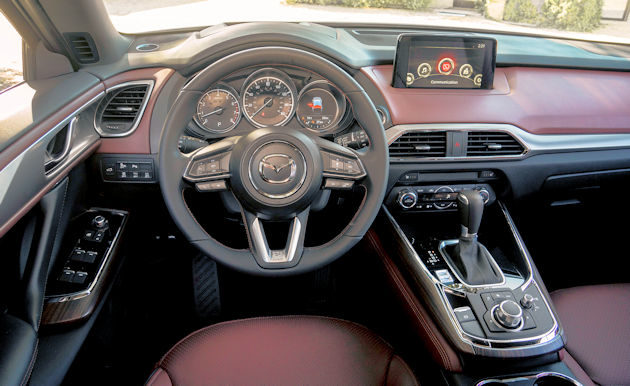 Over the last few years we?ve driven all the Skyactiv Mazda products and while we still don?t understand exactly what Skyactiv means, we know it works. The entire Mazda Skyactiv lineup has great handling, good performance and usually some of the best fuel economy in the category. 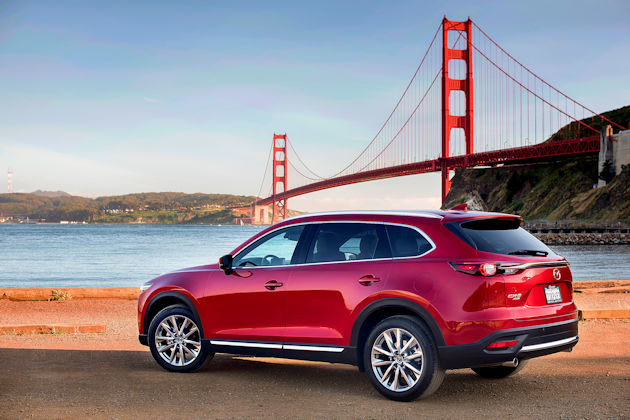 In essence, the Skyactiv technology produces a homogeneous ?let?s all work together? cooperation between the drive and operating systems to produce a vehicle that maximizes fuel economy and performance. And the performance is all coming from a four-cylinder engine. 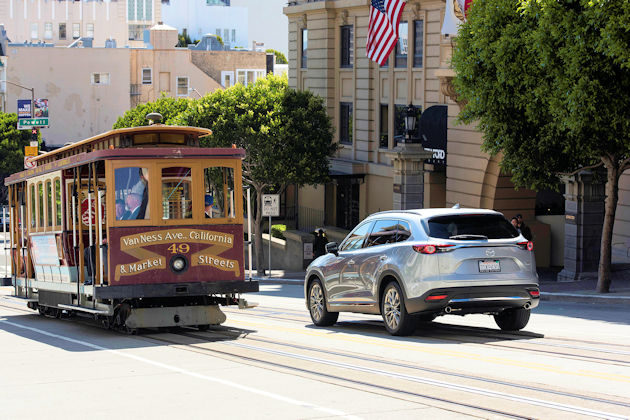 The new CX-9 engine is not just a four-cylinder engine with a turbocharger bolted on, it is the latest variation of the Mazda Skyactiv engine series. Mazda engineers have designed a new turbocharger which they call the Dynamic Pressure Turbo. It?s the world?s first turbocharger with the ability to vary the degree of exhaust pulsation depending on the engine speed. 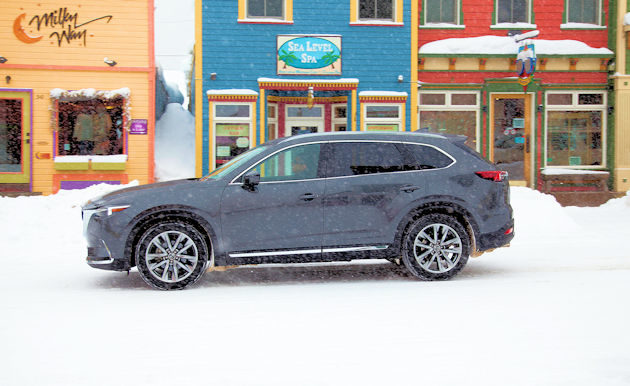 Mazda explains it like this, ?The system routes engine exhaust to the turbocharger?s turbine through smaller ports at low rpm. It works similarly to when one might place his or her thumb on a garden hose, creating a strong amount of pressure through a smaller outlet. This allows the turbocharger to spool up quickly, creating instant boost?up to 1.2 bar (17.4 psi) of pressure.?

The 2.5-liter four-cylinder engine in the CX-9 is rated at 250-hp and 310-lb.ft. of torque and drives the front wheels, or the optional i-Activ all-wheel drive through the six-speed Skyactiv-Drive automatic transmission. The system has a lot of fancy names, but it works beautifully. It feels as strong as most V-6 engines. Zero to 60 mph acceleration takes 7.2 seconds and the EPA rates fuel economy at 21 mpg city, 27 mpg highway and 23 mpg combined. We averaged 24.9 mpg during a week of mixed local driving. 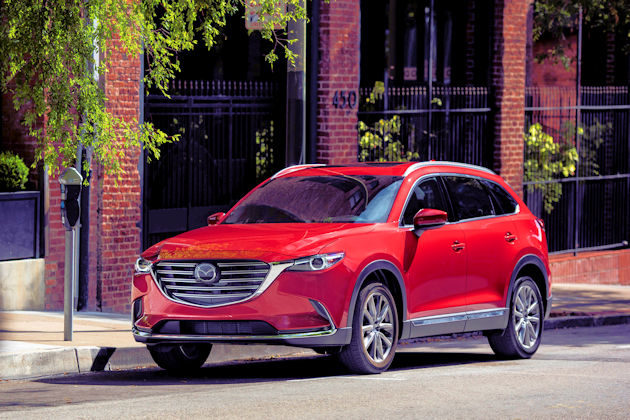 The three-row CX-9 SUV was the last Mazda to get the Skyactiv? treatment. While it might be categorized as an SUV, we think it?s pure crossover. It?s impressive on the highway, unpaved roads and in adverse weather, but it can?t compete the off-roader SUVs designed to crawl over rocks and trees. 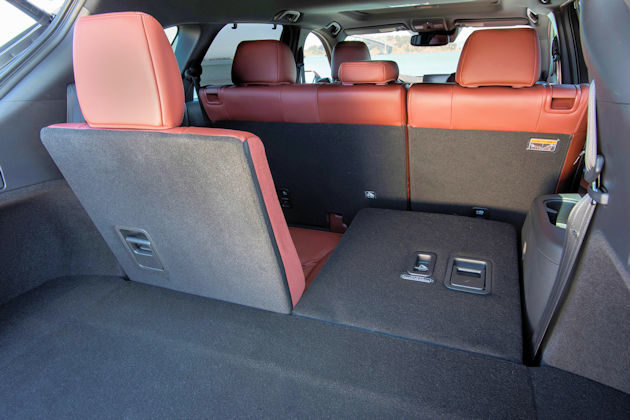 The 2016 Mazda CX-9 is available in four trim levels: Sport, Touring, Grand Touring and Signature each with the same Skyactiv drivetrain. Pricing ranges from $32,420, including the destination charge, for the Sport with front-wheel drive up to $44,915 for the all-wheel drive Signature model. All-wheel drive adds $1,800 to the three lower models and is standard on the Signature. The Signature version has no options available other than color and some accessories.

The Mazda CX-9 drove more like a sporty sedan than a crossover/SUV when we ran it through the winding mountain roads near our home in Southern Washington State. The CX-9 is the largest of the lineup, but it acts more like one of the smaller Mazdas almost encouraging the driver to step up the pace and be ?one? with the corners. It?s fun to drive! 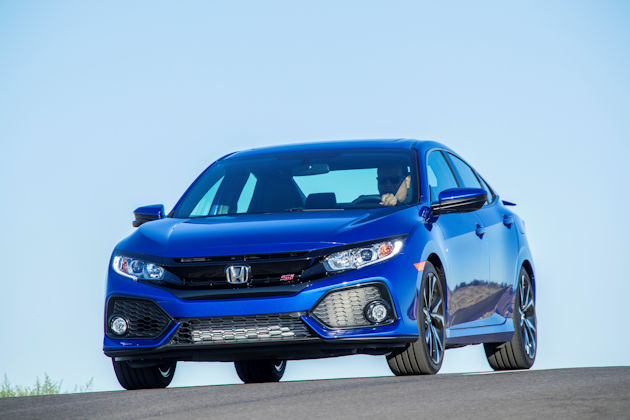 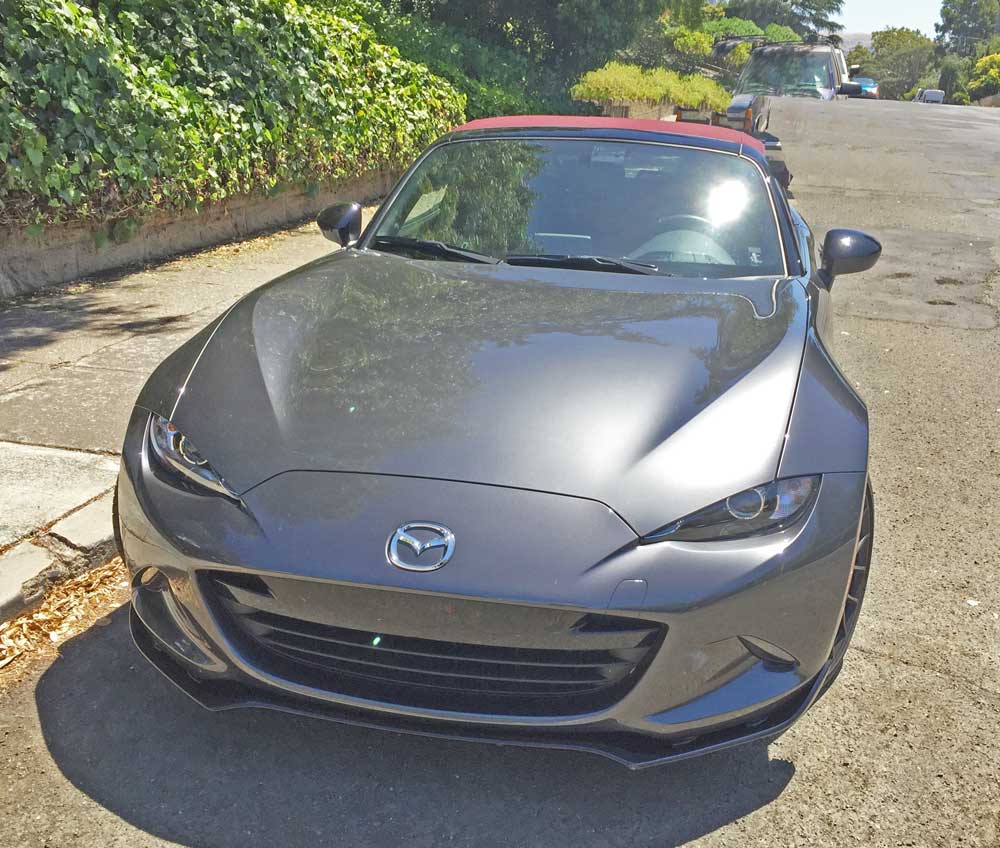