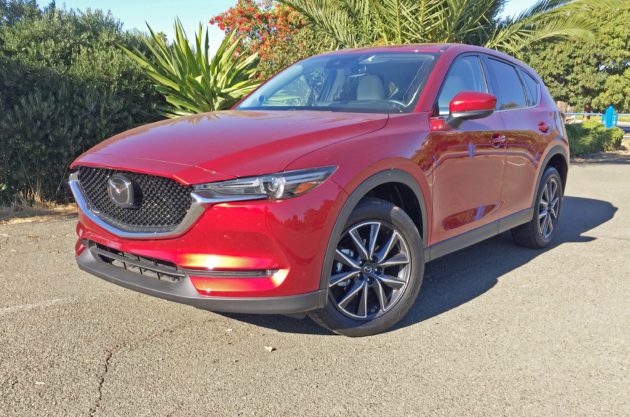 The 2013 Mazda CX-5 five-passenger Crossover SUV was the first Zoom-Zoom family member to feature Mazda?s full array of SKYACTIV? technologies. It offered a view of the Japanese brand?s future, incorporating SKYACTIV? Technology and focusing on optimum fuel economy, while at the same time striving to provide dynamic handling and performance attributes. SKYACTIV Technology is not a package or trim level, but rather, is an all-encompassing, deeply embedded philosophy that obtaining more power, more torque and more miles per gallon does not mean sacrificing fuel economy, design or safety. 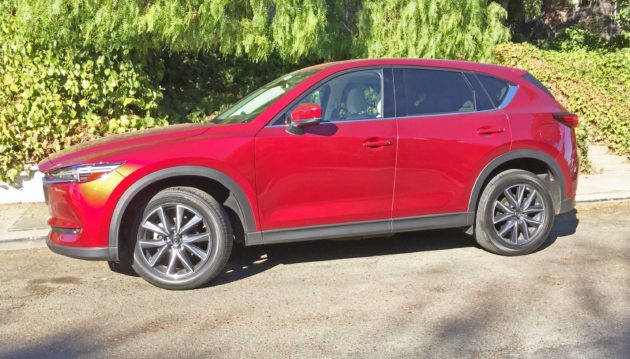 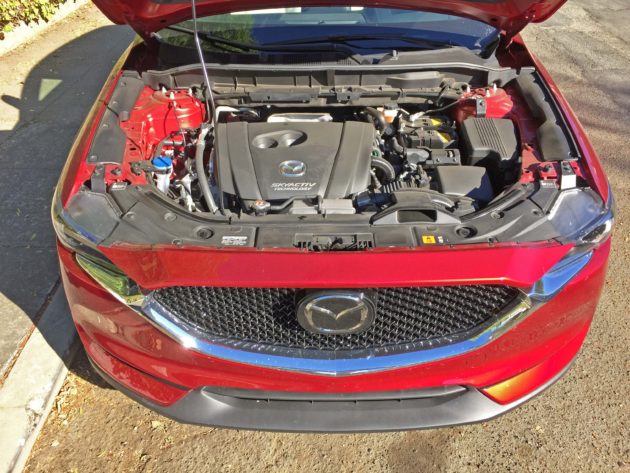 Exclusively powering all trim levels is a front transversely-mounted 2.5-liter SKYACTIV-G, DOHC, 16-valve inline four-cylinder engine with Advanced Direct Injection, which produces 187 horsepower at 5,700 rpm while developing 185 pound feet of torque at 4,000 rpm. The engine mates to a six-speed SKYACTIV-DRIVE Sport mode automatic transmission that gears energy to either the front wheels or to all four wheels via Mazda?s iACTIV All Wheel Drive. The engine is PZEV emissions rated in all 50 states. 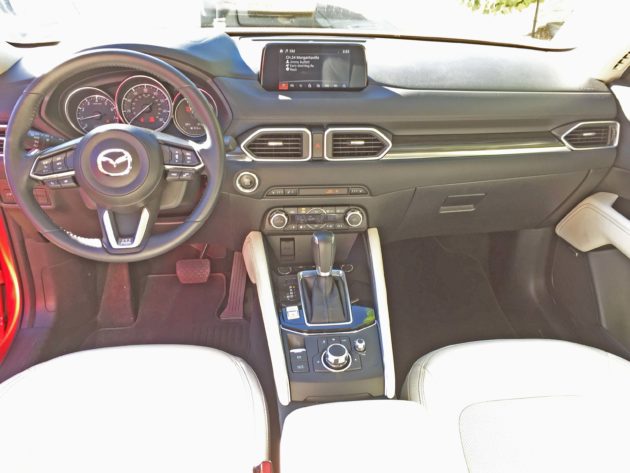 The basic design form of the Mazda CX-5 is not at all unlike that exhibited by both the CX-7 and CX-9 ? it remains as the Baby Bear in terms of size in the fictional Bear family. The CX-5 leads off with Mazda?s familiar, but now more aggressive, signature trapezoidal grille flanked by jewel-like headlamps that wrap around into the suggested fenders with pronounced fender wells. A lower air intake below the grille is flanked by inset, integrated fog lamps. The more smoothly sculpted hood slopes into the sharply raked windshield that meets the roof, which arches gently down and rearward. The nose is now more shark-like. The tail of the CX-5 showcases an inward pinched greenhouse, with an integrated roof spoiler lip above the rear sloping backlight. The wrap around tail lamps ride just below the rear hatch glass and chiseled rear fascia that sports an inset diffuser encompassing the dual exhaust outlets. In profile, the CX-5 displays a rear rising beltline and shoulder, along with a carved upper rocker character line. Despite its similarity in basic form to its larger stablemates, the CX-5 really was developed as its own vehicle from the ground up, from design sketches to production. It still begins with Mazda?s familiar philosophy Jinbai Ittai, which translates as a oneness between vehicle and driver – an inherent trait throughout the entire Mazda line. KODO, another Japanese term, denotes a design language inspired by nature and translates as ?Soul of Motion? 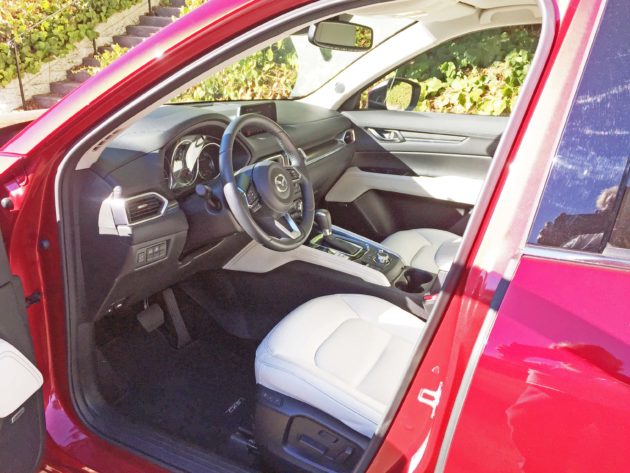 Moving to the inside, the interior of the CX-5 delivers an improved driver-oriented cockpit. Gauges and switchgear are well placed for optimum user friendliness. The in-dash touch screen enables intuitive phone, audio and navigation functions (when so equipped). Steering wheel controls allow for a straightforward operation of the infotainment system. Push-button start is standard with an optional advanced keyless entry system. Other available features include Bluetooth? phone and audio connectivity and iPod? audio playback. USB and auxiliary jack connections are standard, located in the center console storage bin. iPod information may be accessed via the infotainment screen. 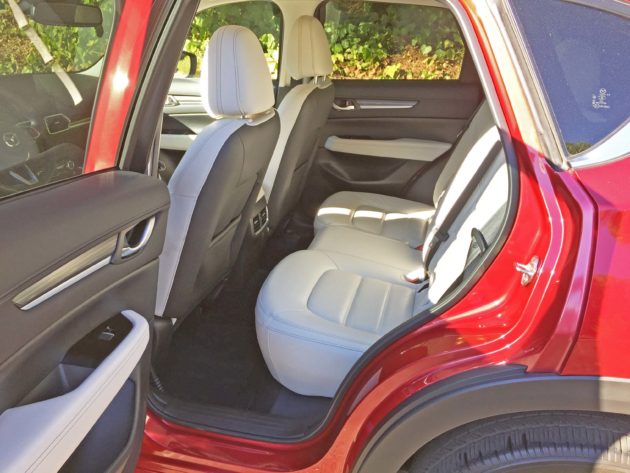 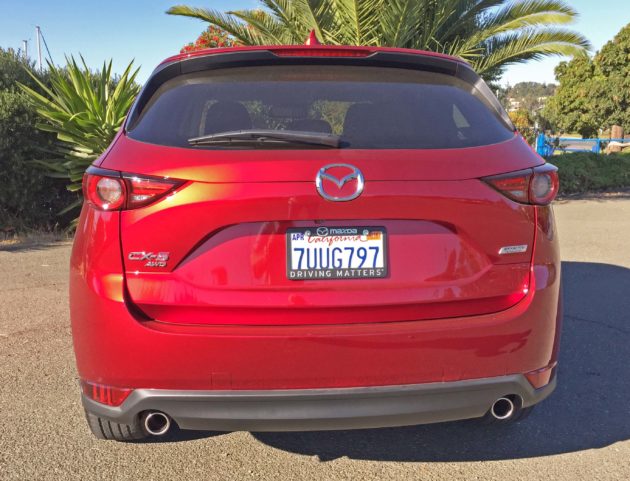 My test 2017 Mazda CX-5 was an All-Wheel drive Grand Touring model, powered by the 2.5-liter SKYACTIV four-cylinder with the six-speed SKYACTIV- Drive automatic transmission. It wore a Soul Red metallic exterior finish and featured a Black and Parchment-toned interior. The base price was set at $30,695., while options and the Delivery and Processing fee bumped the final tally to $34,380. 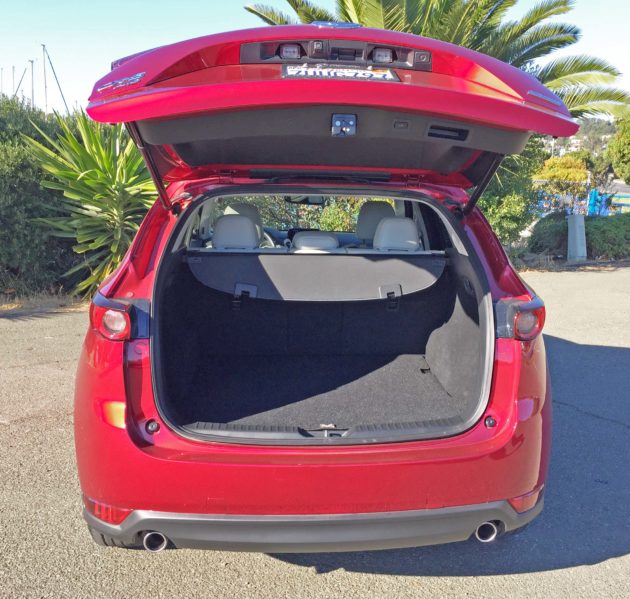 SUMMARY: The 2017 Mazda CX-5 Grand Touring AWD steps up to the plate loaded with standard features and equipment and serves well as the ideally-sized crossover SUV. It?s compact and highly maneuverable. It is also reasonably fuel-efficient and is definitely priced right, considering its most impressive content. 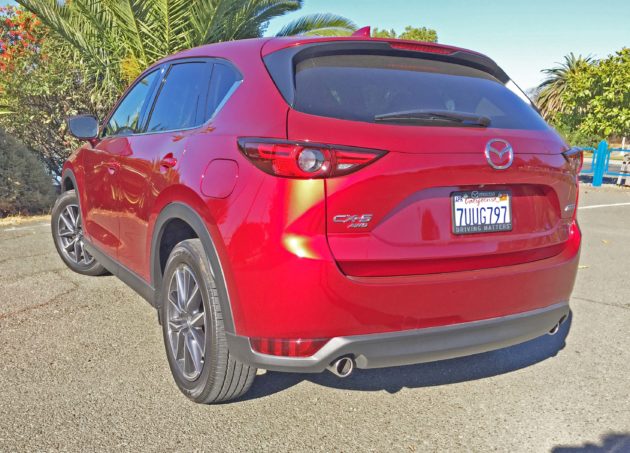 The ride quality is comfortable and the handling characteristics lean toward the sporty side of the equation. Acceleration from the 2.5-liter engine on the other hand could favorably benefit by adding turbocharging, but then, that would tend to defeat the SLKYACTIV technology?s role in focusing on sustainable and efficient transportation. Towing capacity is rated at 2,000 pounds. 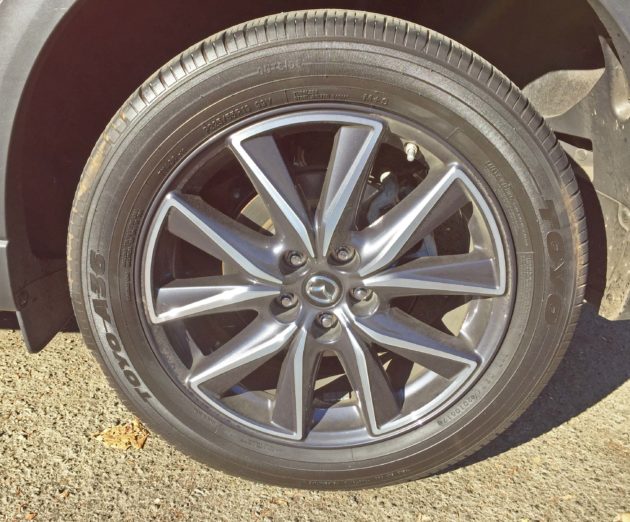 In the final scheme of things, the CX-5 crossover from Mazda still merits the Zoom-Zoom mantra, and remains a pleasing and functional member of their stable, providing yet another sensible choice for the consumer seeking a reliable and versatile family transport for those with active lifestyles.