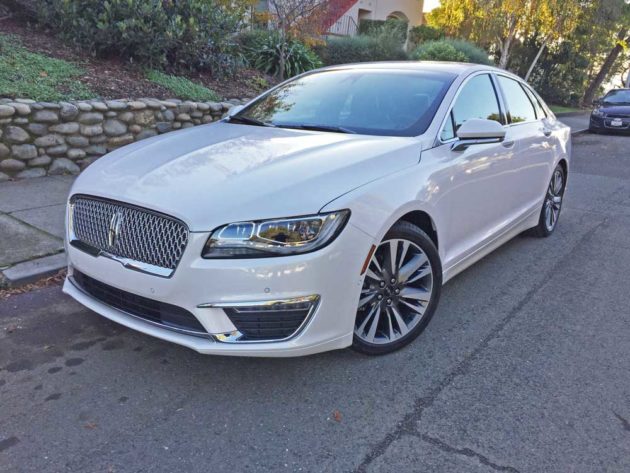 Lincoln?s MKZ sedan was initially launched in 2005 as a 2006 model building upon the luxury division?s standard set by the legendary Lincoln Zephyr. A hybrid version appeared in 2013 as a 2014 model, powered by a 2.0 liter Atkinson Cycle inline four-cylinder engine. The 2017 Lincoln MKZ HEV benefits from several functional and design improvements, making what was a good car even better. 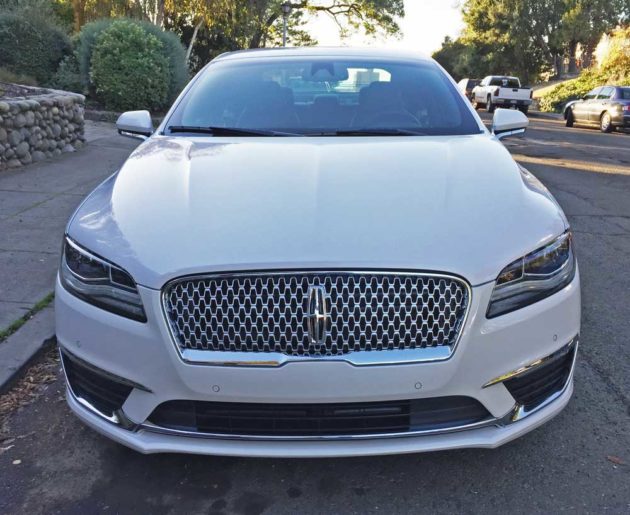 The Lincoln MKZ HEV is an exceptionally good looking vehicle that bears a strong resemblance to today?s modern Jaguar design cues ? especially up front with its Jag styled grille that replaces the split wing waterfall grille. The new MKZ is not inexpensive either, which may be a bit offsetting to some, since it is essentially based on the Ford Fusion?s platform architecture. 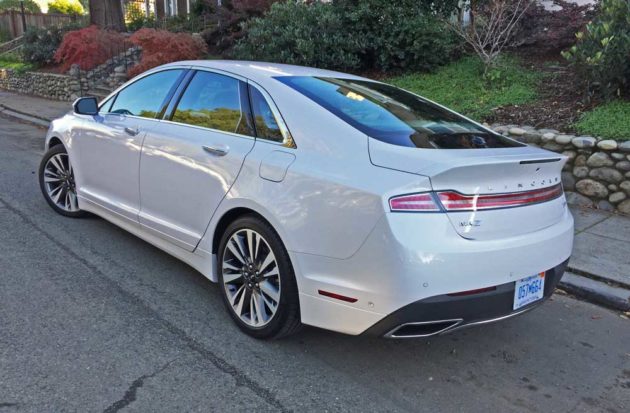 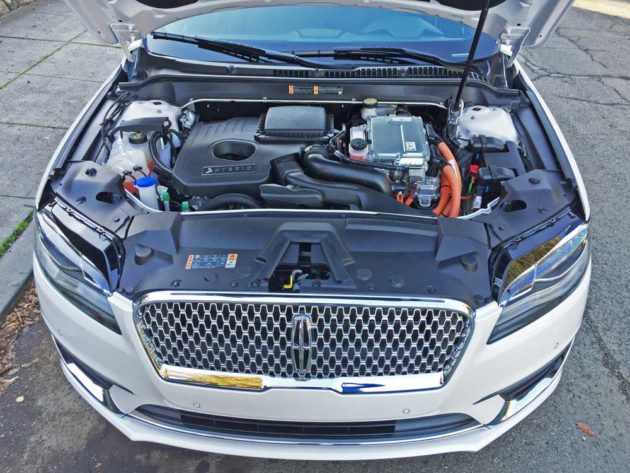 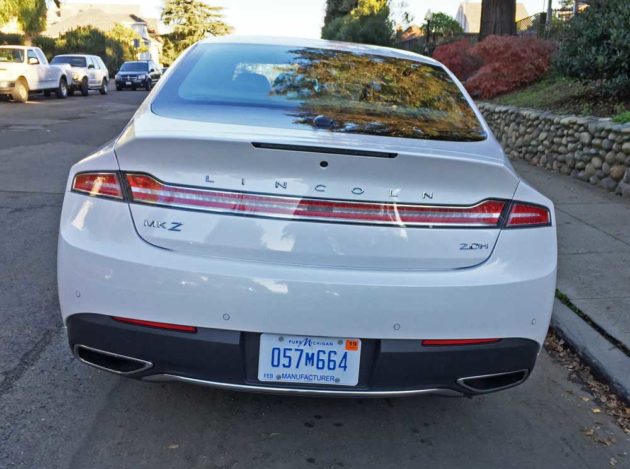 The MKZ joins the flagship MKS sedan and MKT crossover with distinctive design elements, which include varying interpretations of the new grille.. The grille is flanked by thinner, wrap-around headlamps that generate a wider, sportier appearance. The MKZ?s, chamfered front fascia shares a family
resemblance with the Lincoln MKS, featuring a sculpted hood and ridges that flow into the A-pillar. The rear sports an integrated decklid spoiler with fully horizontal LED taillamps, that further accentuate the car ?s width. 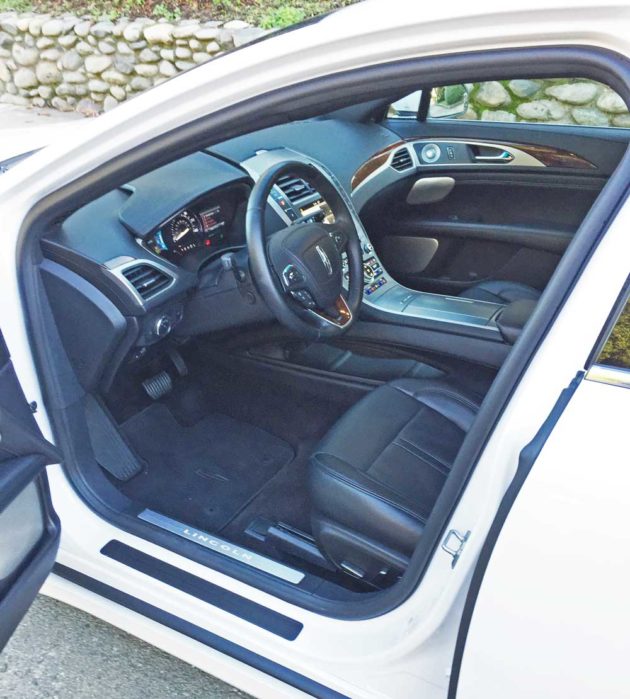 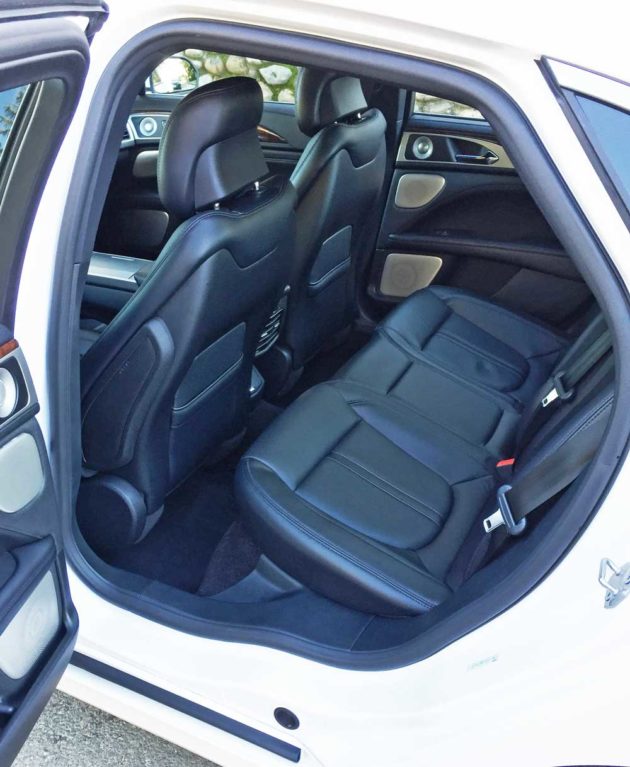 Inside, the Lincoln MKZ?s cabin reflects an even more upscale look with genuine aluminum and wood along with a sweeping, full-width instrument panel, complete with the Lincoln signature push-button gear shift that contributes to a sense of spaciousness while creating storage space in the center console where a traditional gearshift would ordinarily be. Detailed touches include new welcome lighting, chimes and tuxedo stitching on luxury leather seats. 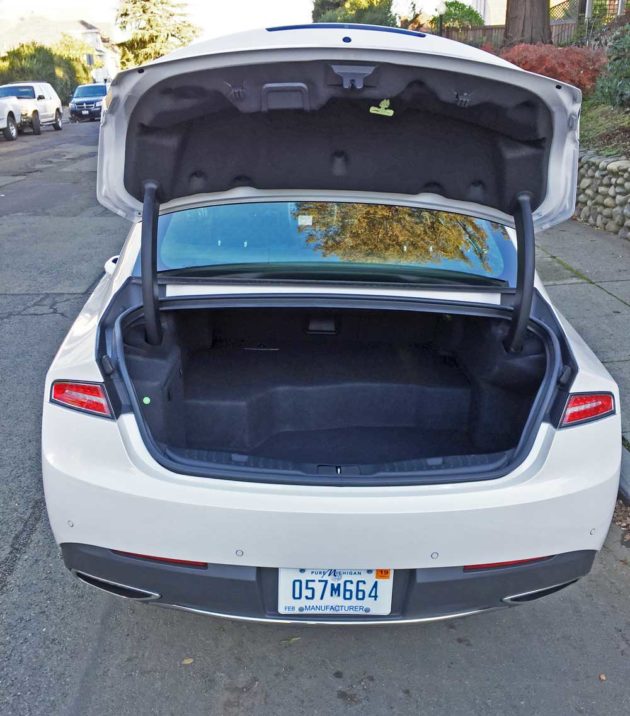 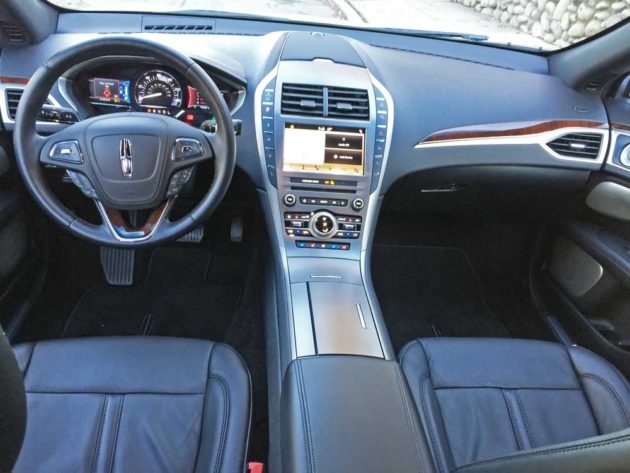 My test 2017 Lincoln MKZ HEV came in Reserve trim and was in the Front-Wheel Drive configuration. The exterior finish was done in White Platinum metallic, while the interior was executed in Ebony leather with aluminum and wood accent trim elements. The base sticker was set at $39,510., while the Equipment Group 600A, the White Platinum paint finish, MKZ Technology, MKZ Luxury Packages, MKZ Climate Package, Multi-Contour Seats and Destination and Delivery charge. Bumped the final sticker to $49,215. before tax, license and federal, state and local tax credits. 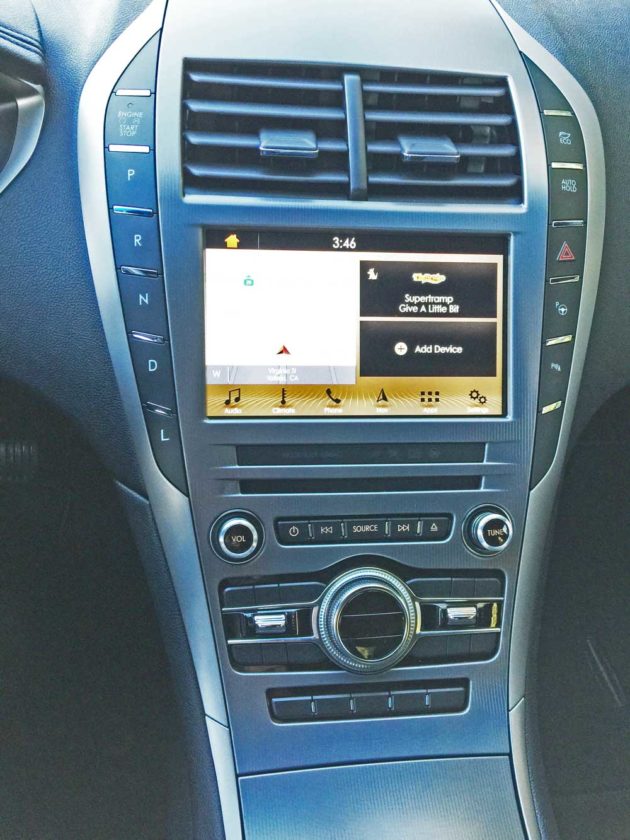 SUMMARY: I still have an issue with Lincoln?s 2017 lineup of vehicles in the alpha-designation of their models ? there?s MKX, MKS, MKZ and MKT, which is genuinely confusing. Dealing with model variations is what I do, but I must sympathize with the consumer who doesn?t deal with such matters on a daily basis. Mind you, Lincoln isn?t the only guilty party ? BMW and Mercedes-Benz deliver the same level of confusion with their alphanumeric monikers.

Okay, ?nuff said about model nomenclature, let?s move on to state that the MKS is a very desirable four-door mid-luxury HEV or Hybrid sedan. It is attractive, and performs well. The CVT transmission works more smoothly than most. 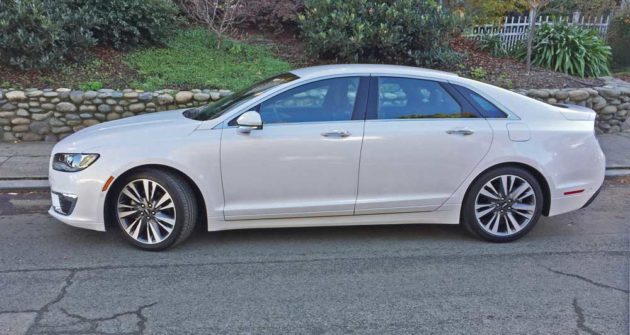 Ride quality is firm enough to be sporty and compliant enough to be quite comfortable, and the handling characteristics lean to the sporty side of the chart, and an auto hold feature keeps the car at a complete stop without having to press and hold the brake pedal ? great for heavy stop and go commute traffic, and there?s an available enhanced park assist that utilizes ultrasonic sensors to help the MKZ seamlessly steer itself into a parallel or perpendicular parking spot. It can also assist with park-out as needed. As with other Ford Hybrid products there is a green leaf display that grows with efficient driving habits alomg with readouts for battery charge level, distance on EV power only, regen miles and a braking score. 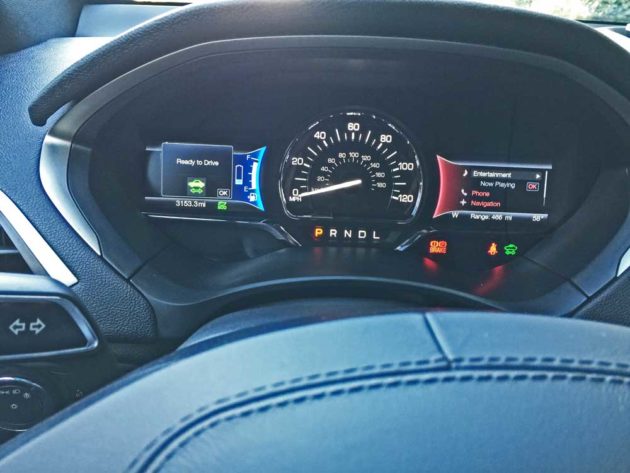 The MKZ HEV serves up a complete menu of driver assist technology, safety features and infotainment and connectivity choices. 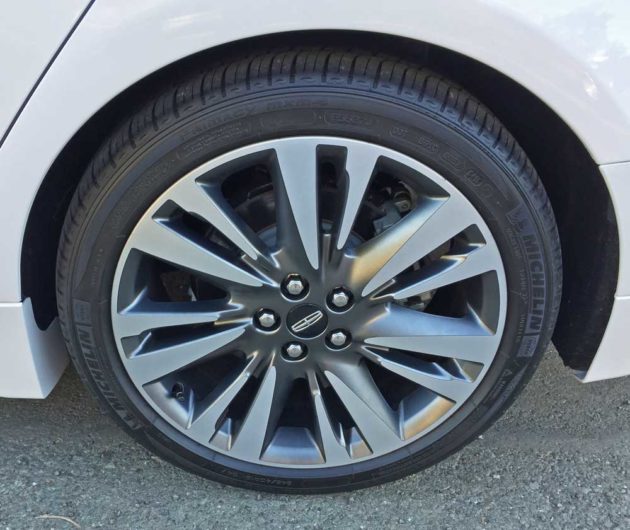 The MKZ falls just below the flagship MKS in Lincoln?s hierarchy, but the HEV version may prove to be the better choice for many as it makes for a stylish, luxurious, yet economical form of transport. 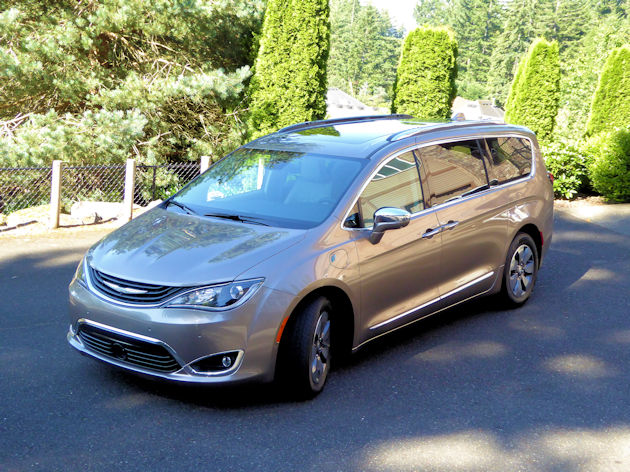 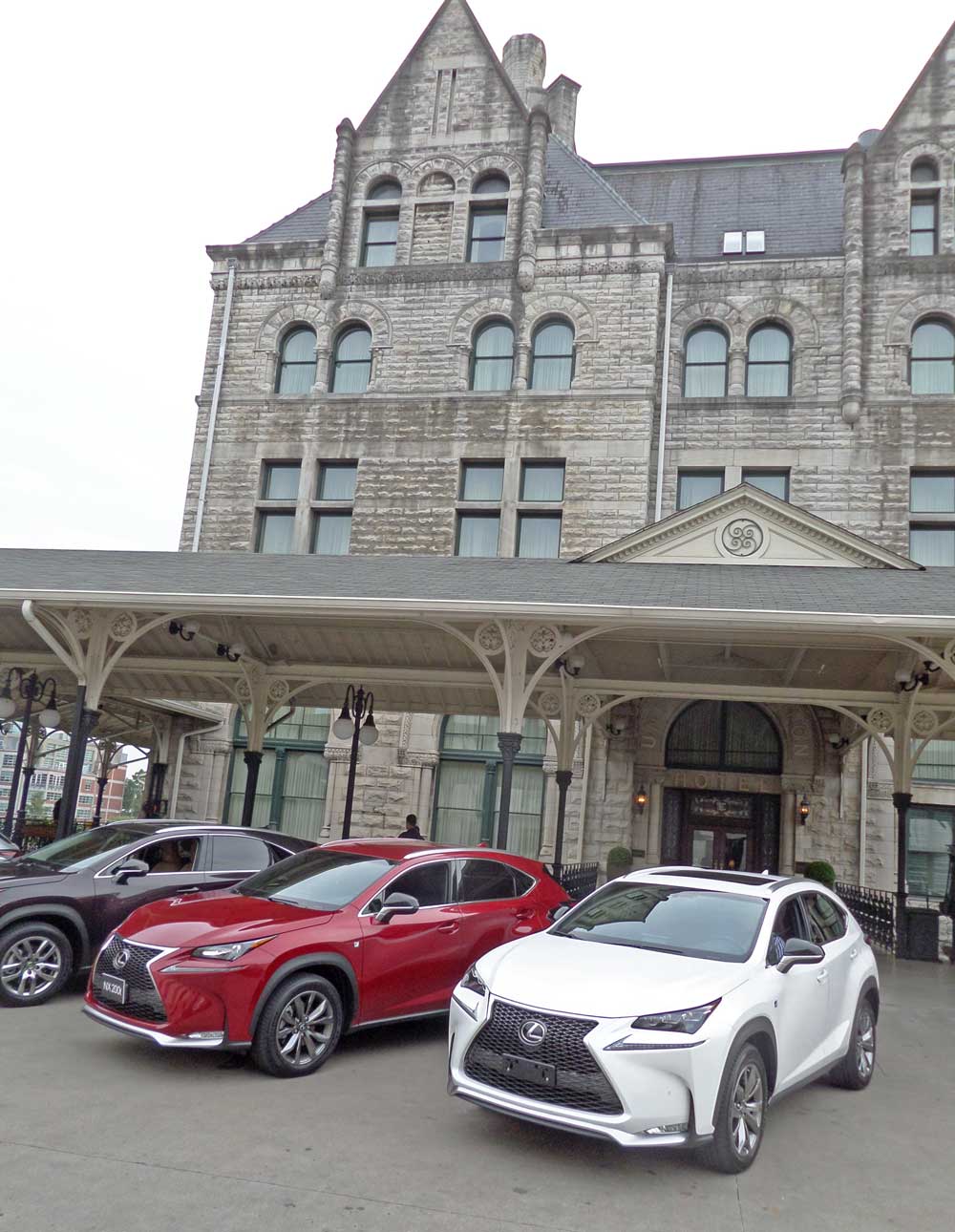