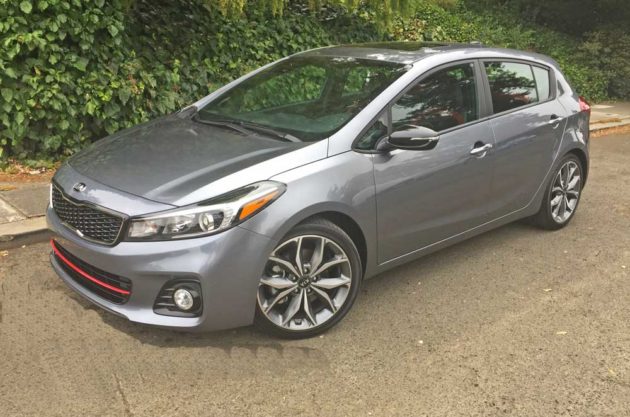 The refreshed Kia Forte5 for 2017 was unveiled early this year with subtle visual changes at the North American International Auto Show in Detroit. Other improvements included the addition of a new 2.0-liter 4-cylinder engine that delivers better fuel economy along with enhanced performance. 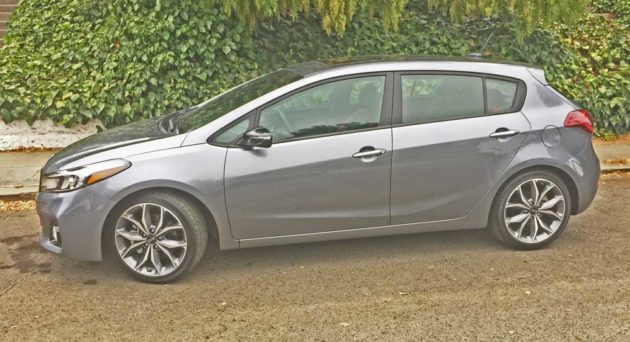 Styling modifications include a new front bumper and ?tiger nose? grille that?s been stretched to connect with the new headlights, similar to this year?s Kia Optima. Two designs will be available ? one that?s focused on a more sophisticated look, while the other design takes on a bolder, sporty appearance. Out back are new taillights with optional LEDs.

This latest iteration Kia Forte comes in three variations: The Forte Sedan; Forte5 hatch and Forte Koup. Three levels of trim remain – LX, EX, and SX ? with each one bringing something new for 2017. The entry-level LX is equipped with features such as projector beam headlights and remote keyless entry with trunk opener and is now available with Blind Spot Detection3 with Lane Change Assist and Rear-Cross Traffic Alert, as these advanced driver-assistance systems are optional across the entire range.

The EX comes with the most changes as previous options ? including LED taillights, leather seats, heated front seats, push-button start with Smart Key, and perimeter approach lighting with front-door pocket lighting ? are now standard along with UVO eServices. Kia?s UVO infotainment system offers Android Auto and Apple CarPlayTM (late availability) compatibility, and is displayed on a 7-inch color touchscreen4. Both platforms allow staying connected by replicating key smartphone apps and functionality on the touchscreen with the ability to send text messages, access music, or look up driving directions while behind the wheel. 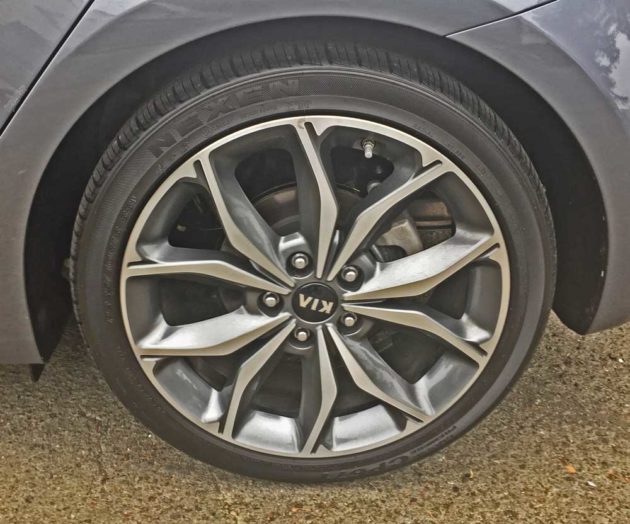 The sporty SX trim comes with all of the above and more, including 18-inch alloy wheels, unique front and rear fascias with red accents, and dual exhaust tip finishers. Also new for the SX is an Orange Color Pack, which further signifies the SX?s sporty nature with orange leather seat inserts and contrasting stitching on the seats and shifter. 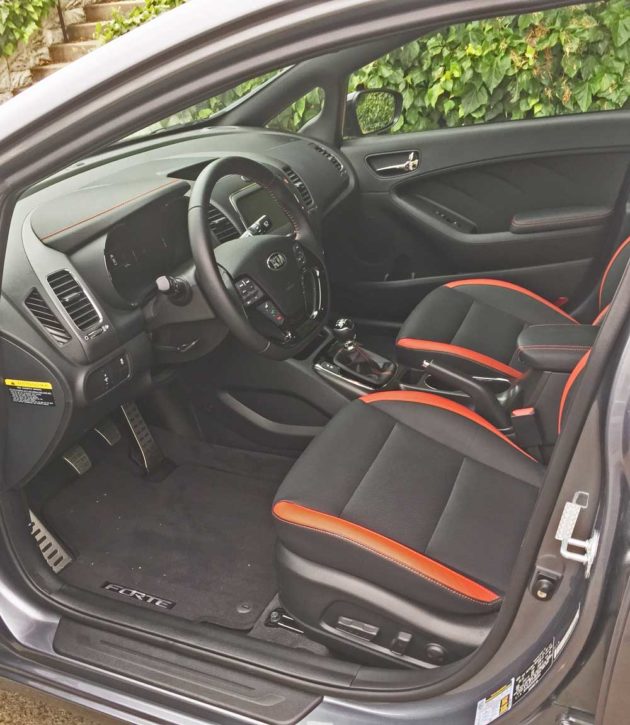 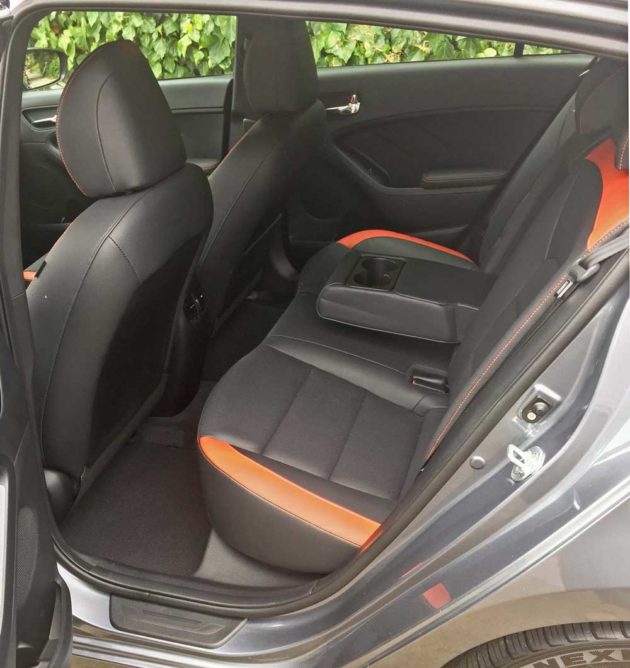 Beneath the hood, the 2017 Forte5 comes standard with a 2.0-liter GDI four-cylinder engine, which is paired with a six-speed manual transmission or an available second-generation six-speed automatic transmission. Maintaining the sport theme in the SX is a zippy 1.6-liter turbocharged GDI four-cylinder engine, which is now available with a seven-speed dual-clutch transmission. 2017 Koup details will be released at a later date. 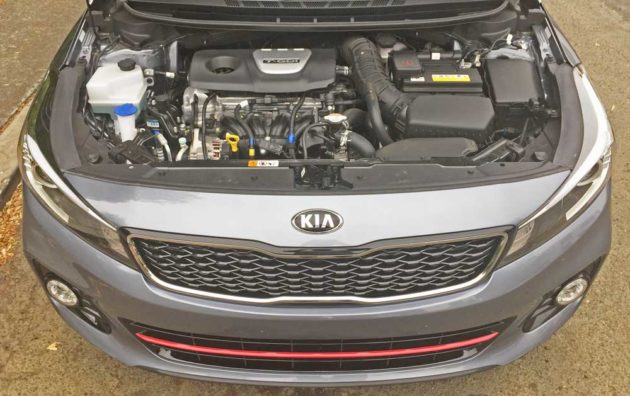 For 2017, the SX trim retains its top position with standard premium exterior features such as LED taillights, Smart Key with perimeter approach lighting and front door pocket lighting, and new 17-inch alloy wheels. Like its larger Optima stablemate, the Forte is available with Dynamic Bending Light technology, which uses steering wheel inputs to angle the light around corners and bends. 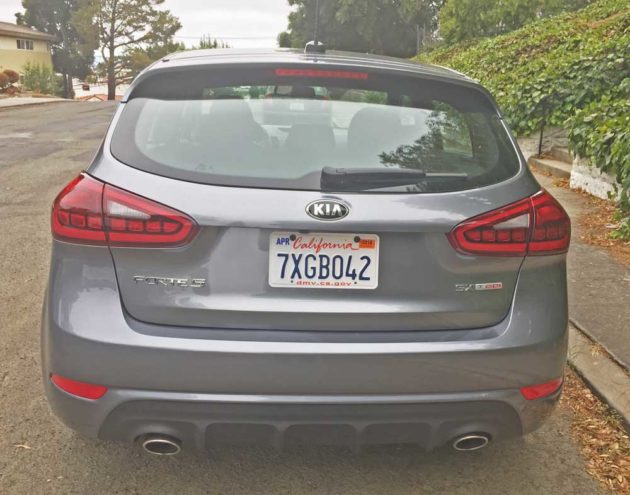 Dependent upon trim, the Forte5 also comes with Kia?s latest navigation system. The EX and SX trims also come with Drive Mode Select, which allows the driver to change the driving experience based on their preference: Normal, Eco, or Sport as standard fare.

The new 2.0-liter Atkinson inline four-cylinder engine comes as standard replacing last year?s 1.8-liter inline-4 cylinder engine. It is paired with a six-speed manual transmission or with an available second-generation six-speed automatic transmission that has been engineered to help improve fuel economy. The EX trim is powered by a 2.0-liter GDI I-4 that produces 164 horsepower at 6,200 rpm, while generating 151 pound feet of torque at 4,000 rpm. This engine mates to a six-speed automatic transmission. SX models draw their motive force from the 1.6-liter turbocharged four-cylinder with GDI. 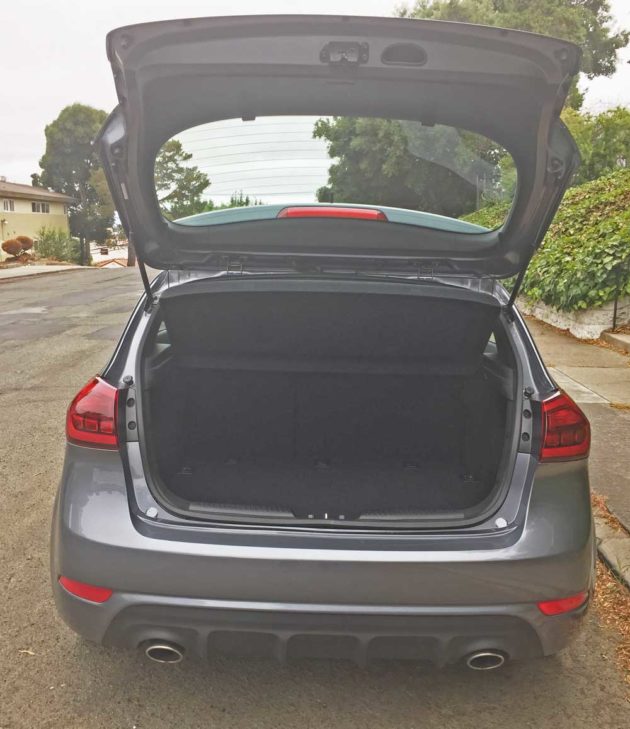 My test vehicle was a 2017 Kia Forte5 SX with the 1.6-liter four-banger, that appeared in a Phantom Gray metallic exterior finish, with a Black interior featuring faux carbon fiber textured trim accents. The base price was set at $26,000, while the as tested sticker read $27,020 after the Inland Freight and Handling charge.

SUMMARY: Driving the 2017 Kia Forte5 SX provided a most pleasant experience. The 1.6-liter engine was readily responsive, and the short-throw transmission shifted positively, making gear changes a pleasure, especially on twisty back roads.

The ride quality was firm, but not uncomfortable, and the handling characteristics served up a sporty flavor. Acceleration was spot on, with virtually no turbo lag. EPA fuel economy estimates were 23 mpg city and 29 mpg highway. 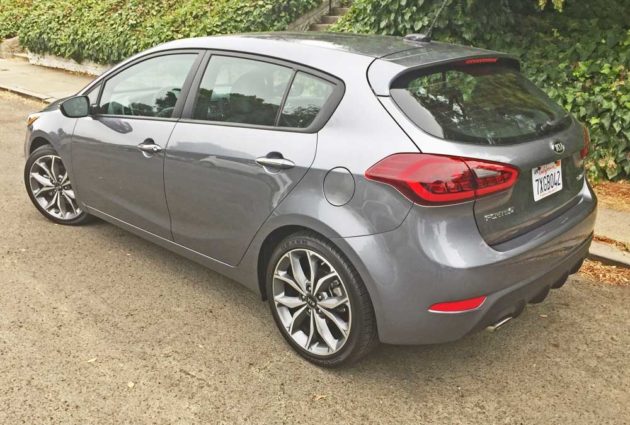 In the final analysis, the 2017 Kia Forte5 is an attractive, efficient, practical and fun-to-drive hatch that provides a heightened versatility and functionality over the sedan.
The Forte sedan is built at Kia?s state-of-the-art manufacturing facility in Pesqueria, NL, Mexico, while the transmission originates in Korea.