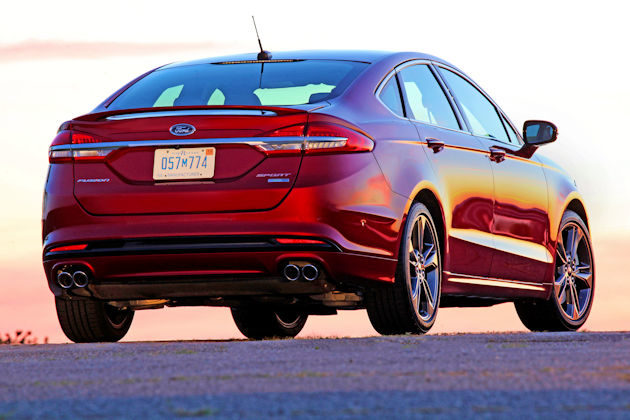 One of the biggest surprises during the last few months of testing new vehicles was the 2017 Ford Fusion Sport. We admit the Fusion kind of fell off our radar and we haven?t been following the recent changes to Ford?s midsize sedan, so we didn?t know what to expect when we brought it home.
The Fusion styling has often caught our eye on the roads with its distinctive front end, and clean lines but it never registered in our minds as much more than one of the heard of mid-size four-door sedans.

Last produced in 2010 the Sport previously ?sported? a 263 horsepower 3.5-liter V-6. It?s a good engine, but there was not much to set it apart from the Camrys, Accords, Malibus, Sonatas, Optimas and other mid-size sedans. The one main advantage the Fusion has over most other mid-size sedans is all-wheel drive, which only a couple of others offer. 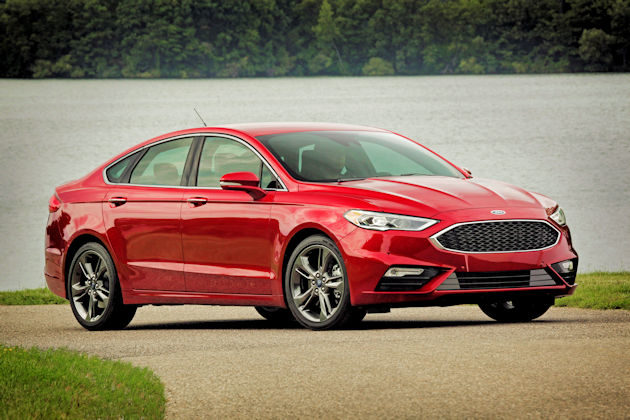 Like most midsize competitors, the Ford Fusion comes in a broad range of models and trim levels. Fusion is offered in 12 versions with six engine choices including a 2.5-liter four-cylinder, a hybrid, a plug-in hybrid and a pair of little EcoBoost four-cylinders ? a 2.0-liter and 1.5-liter. Of that 12, the Fusion Sport brings an entirely different dimension to the Fusion ? performance. You might think of it as the reincarnation of the SHO, only better. 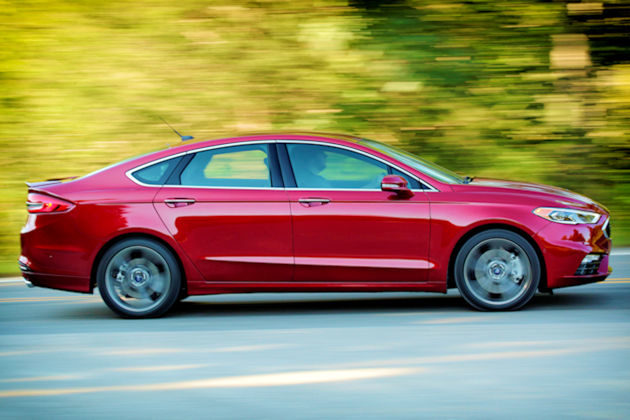 A twin-turbocharged 2.7-liter V-6 engine producing 325-hp and 380-ft.lbs. of torque powers the Fusion Sport. It?s the only car in its class with an engine like this. It has the kind of power that will spin the front tires with any overexuberant press of the throttle, so Ford gave the Sport standard all-wheel drive. When the throttle is punched, it simple jumps forward very quickly. Buff magazine tests list a 0 to 60 mph acceleration time of 5.1 seconds, making it one of the quickest cars in its class. 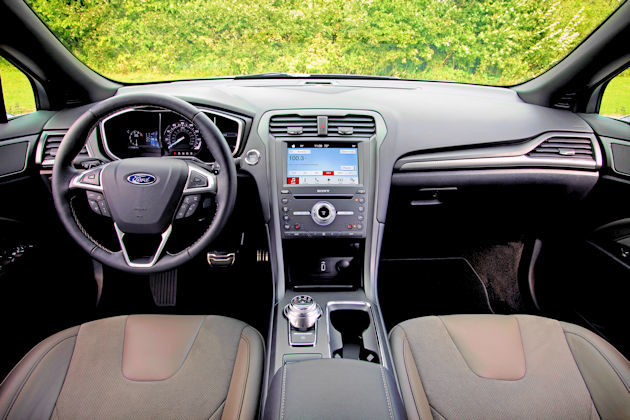 The Sport has a standard heavy-duty six-speed automatic transmission which sends the power to all four wheels and steering-wheel mounted paddle shifters give the driver better control. The shifter is a large console-mounted dial for the driver to shift through the normal P-R-N-D settings, but in the center is a button marked ?S?. Press the S and the Fusion gets an extra shot of adrenalin. The adaptive-damping systems tightens up, the paddle shifters are activated, the throttle response quickens, the steering requires a little more effort and the exhaust seems to get throatier. 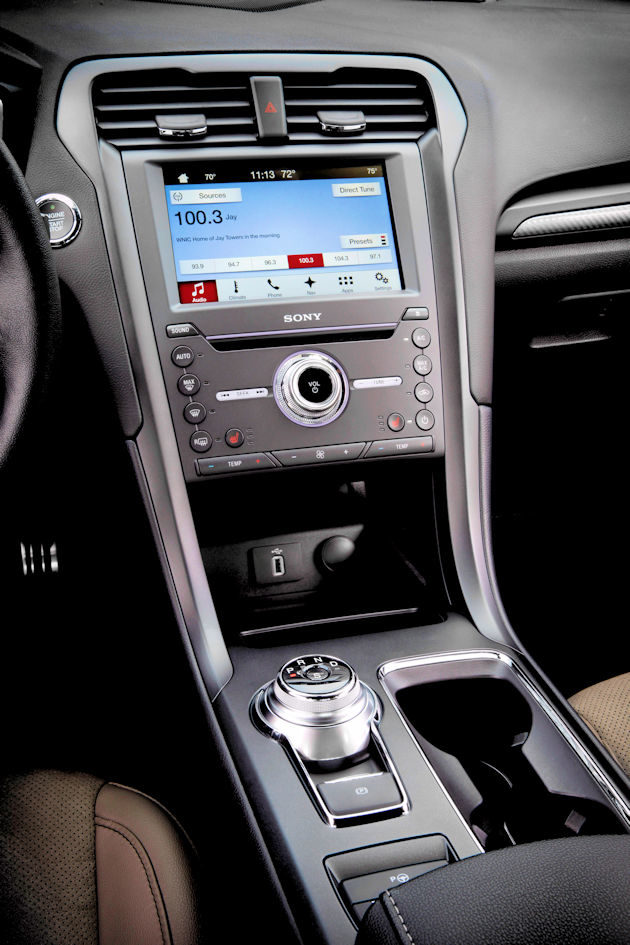 Pressing the ?S? makes the Sport more interesting and fun to drive, and it handles the performance output of the EcoBoost engine even better. It?s kind of like Clark Kent taking off his shirt and exposing the ?S? on his chest. 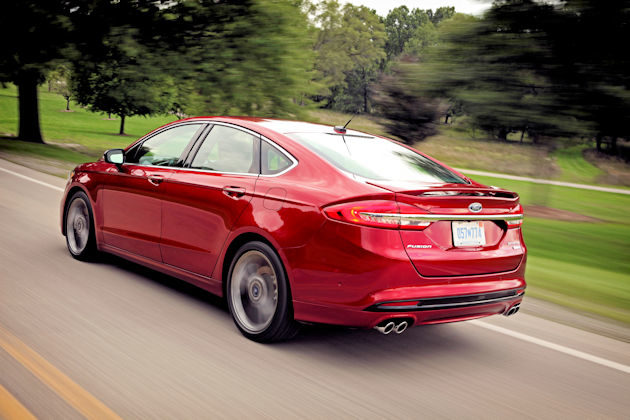 To complete the Sport package Ford engineers added larger anti-roll bars, stiffened the springs and wider tires. It also has a continuously controlled damping for real-time suspension tuning. The system creates a firm ride but it?s a nice balance between ride and comfort. The system also detects potholes, where sensors detect the edge of a pothole and instantly changes the damping rates to reduce the severity of an impact. 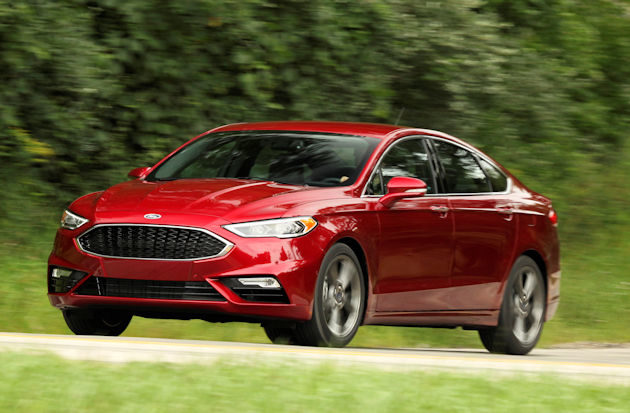 The EPA rates fuel economy at 17 mpg city and 26 mpg highway. We averaged 24.0 mpg during our week of occasional spirited testing. Running this car through the mountain roads was pure fun.

To set it apart visually from the other Fusions, the Sport has a more aggressive front end, a gloss black mesh grille, a rear spoiler, quad exhaust outlets and 19-inch dark wheels with wider tires. 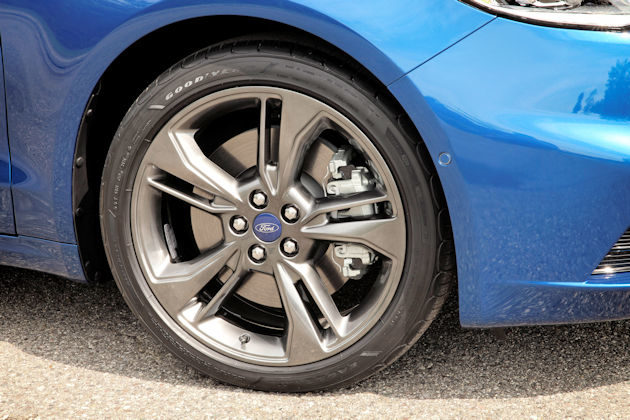 Interior of the Sport is business-like and without bling. The leather trimmed and heated sport seats have Miko? suede inserts to help keep passengers from sliding during more spirited driving. The instrument panel has a smaller tachometer mounted to the left and a large speedometer in front of the wheel. A large touch screen for infotainment, climate, communications and navigation is mounted at the top of the center stack just below the air vents. Climate controls are actual buttons and it has a large knob to control the audio volume right in the center. It?s a very intuitive system, plus it accepts voice commands. 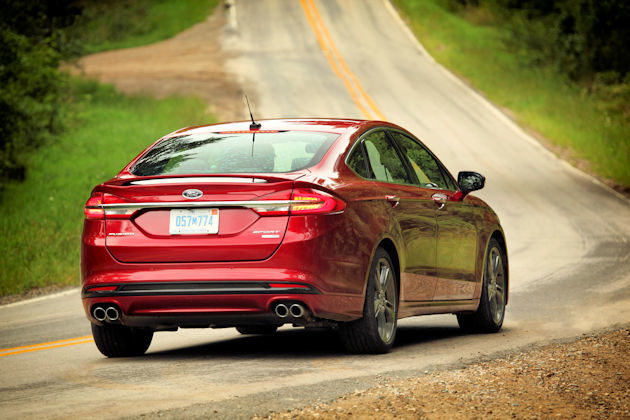 The thick padded three-spoke steering wheel has a solid feel and the face of the wheel has directional and selection controls for the screen inputs along with redundant audio controls plus the adaptive cruise controls. 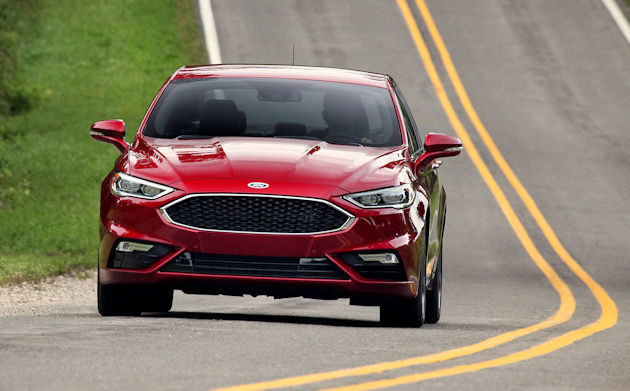 The Fusion Sport has a base price of $34,000, including the destination charge. Loaded, with all the available options, the price can go as high as $42,000.

The 2017 Ford Fusion impressed us. It goes to the head of its class with good looks and excellent performance. Where we live, a car with all-wheel drive is a big plus, too. Anyone shopping for a mid-size family car with an extra quotient of driving fun should check this one out, it?s the proverbial wolf in sheep?s clothing. 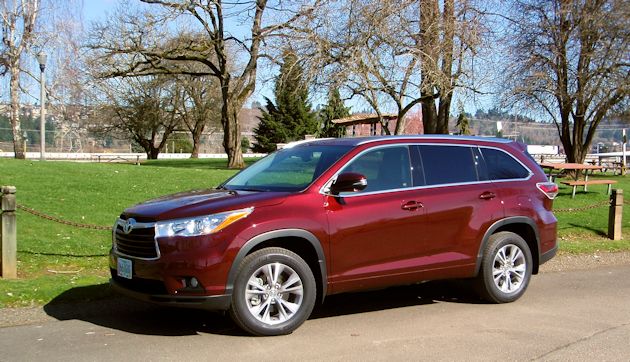