Now seven years into its third generation, the Dodge Durango celebrates 20 years of production. SUV?s, especially large ones, like the Durango, have a tough battle for sales, especially with the popularity of the small to mid-size models. Never-the-less, the Durango has held its own selling more than 5,000 a month for the last few years.

We had not had a chance to test drive a Durango for several years so we were anxious to spend time in the 2017 model to see how it?s holding up against the competition. We were pleasantly surprised to find a solid, comfortable, good-looking, and very quiet vehicle, plus it was fun to drive. With a price point below $50,000 for the very well equipped and highly optioned GT AWD it was also one of the best values in its class. 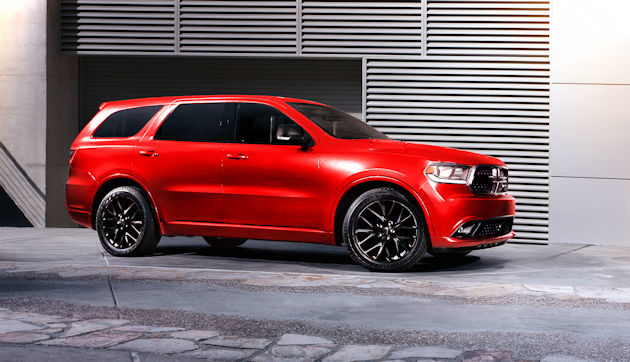 There are six trim levels of the 2017 Durango if you count the new Citadel Anodized Platinum Appearance Package which adds a boat load of platinum customizing bling to the top Citadel model. The five main trims in order from basic to loaded are the SXT, SXT Plus, GT, R/T and Citadel. The GT model is new for 2017, replacing the Limited model. It?s distinctive looking with a sporty monochromatic paint scheme. 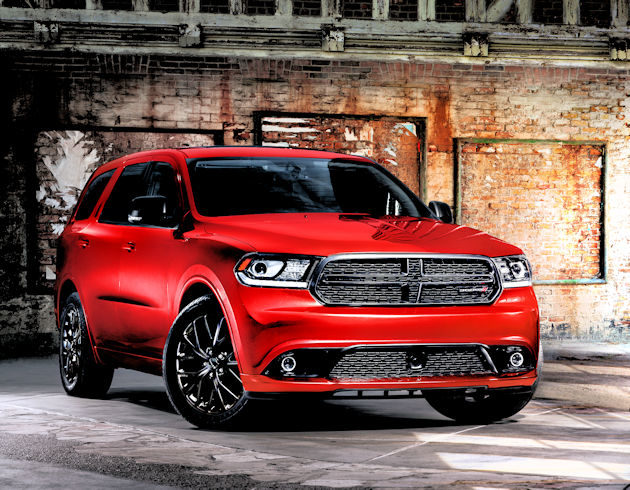 Even though the current Durango has been around seven years it still looks stylish with a distinctive appearance for each trim level, plus Dodge planners have kept it fresh and up-to-date. The Durango is about the same size as the Chevrolet Tahoe and Ford Explorer and it is configured with spacious three row seating and will hold up to seven adults. Cargo carrying capacity is 17.2 cubic feet with all three rows in place and can expand to 85.5 cubic feet when the second and third row seats are folded. 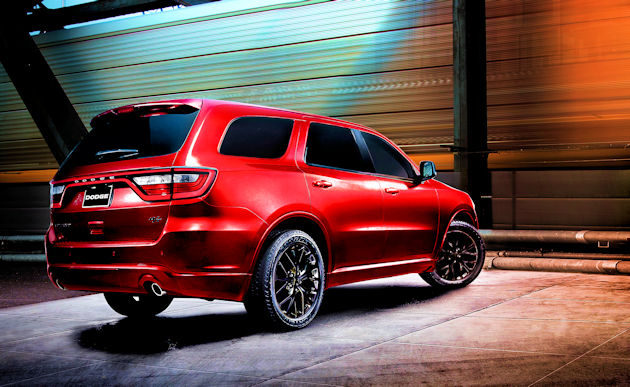 Durango has a rear-wheel drive platform that produces outstanding handling for such a large vehicle. With the available all-wheel drive ($2,600) the Durango has a perfect 50/50 weight distribution. It also has independent front and rear suspensions with a short- and long-arm system in front and multi-link in the rear. Both ends have coil springs and twin tube shocks. The rear shocks have load leveling to enhance the towing capabilities. The Durango can pull up to 7,400 pounds with the RWD and V-8 engine combination or 7,200 with all-wheel drive. The V-6 can tow up to 6,200 pounds. 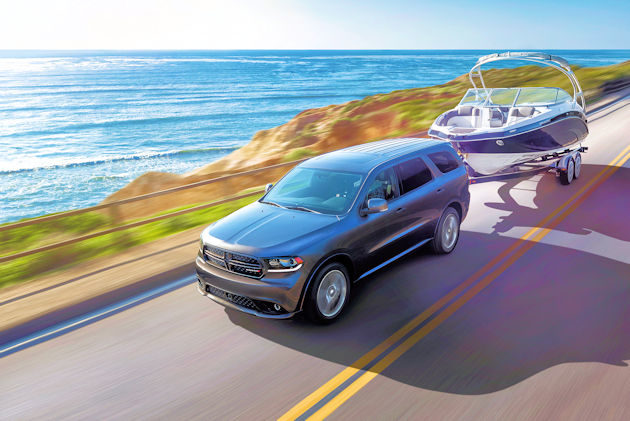 Dodge?s award-winning 3.6-literPentastar V-6 with the excellent ZF-designed eight-speed Torqueflite automatic transmission are standard in all models except the R/T which has a 360-hp Hemi? V-8. The V-6 has a stop-start system to save fuel. It shuts off the engine at stop lights and then automatically restarts unobtrusively when the driver?s foot is removed from the brake. The system can be turned off by drivers that don?t like the feature. The Hemi engine also an option in the Citadel trim. We were pleasantly surprised by the power and performance of the 290-hp (295-hp when equipped with dual exhaust) V-6, it feels more like there?s a V-8 under the hood. 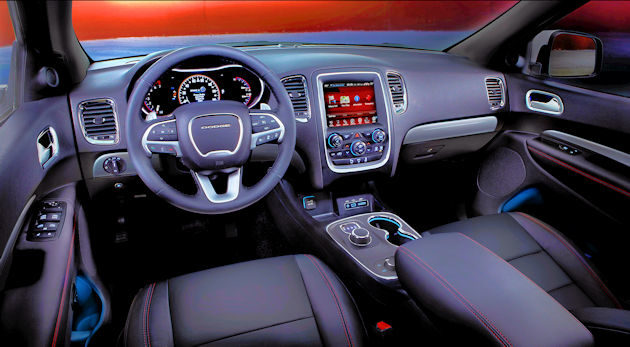 We both like the transmission setup which uses a rotary shifter on the center console for main transmission functions and steering wheel mounted shift paddles for better driver control.
Buff magazine testing lists the V-6 zero to 60 acceleration at 7.4 seconds. The Hemi makes that run in 6.2 seconds. Barbara was happy with the V-6, but Bill favored the Hemi.
The V-6 engine has an EPA fuel economy rating of 18 mpg city, 25 mpg highway and 21 mpg combined. We averaged 20.9 mpg during our week of mixed driving. The Hemi version is rated at 14/22/17 mpg with either front- or all-wheel drive. 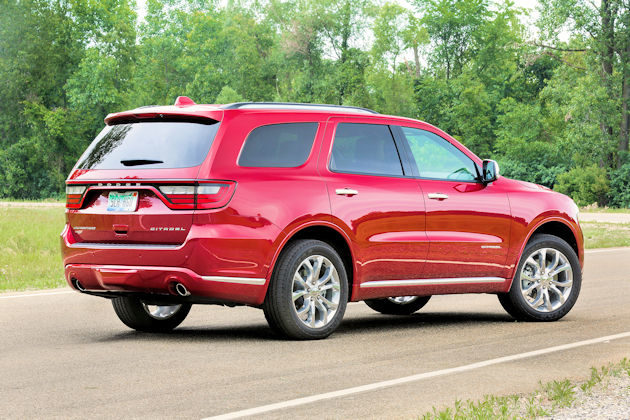 The Hemi all-wheel drive has a low-range transfer case to improve off-road agility and for times when more power is needed, like when pulling a boat up a launch. The transfer case also has a neutral positon that allows the Durango to be towed behind a motor home with all four wheels on the road, without damaging powertrain components. The V-6 system is a full time AWD. 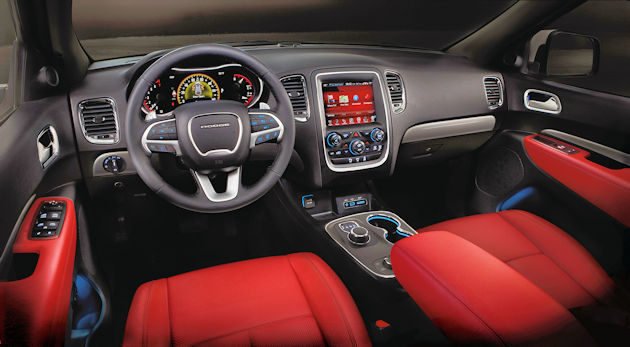 Inside the Durango has a full complement of the tech features available for the R/T and Citadel trims including Forward Collision Warning with Active Braking, LaneSense and Lane Departure Waning. Adaptive Cruise Control with Stop, Forward Collision Warning with Active Braking, Blind-spot Monitoring, and Rear Cross Path detection systems are also part of the available ($2,295) Technology Package.

Our test car also included a Blue-Ray entertainment center ($1,995) with screens that fold up from both front seat backs to provide entertainment for the two rear rows. 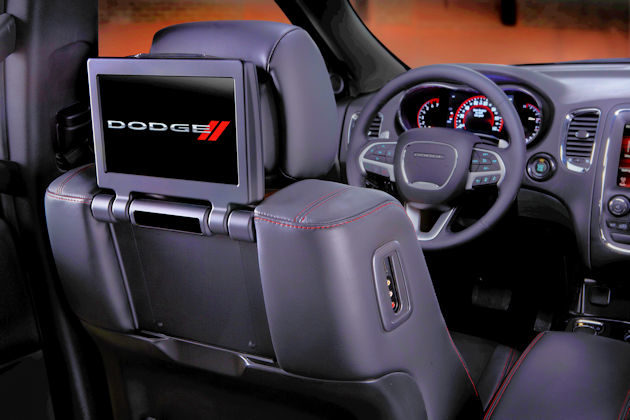 We think the Dodge Uconnect navigation system is one of the best in the business. The Durango system is configured with a standard five-inch screen or an available 8.4-inch touchscreen (the largest in this class). The system has large, easy to see icons, and it reacts instantly so you don?t find yourself impatiently double tapping. The menus are easy to follow and gets you right to the desired command quickly. Included with the Uconnect system option package is a power rear liftgate. It?s an unusual combination, but a nice addition. 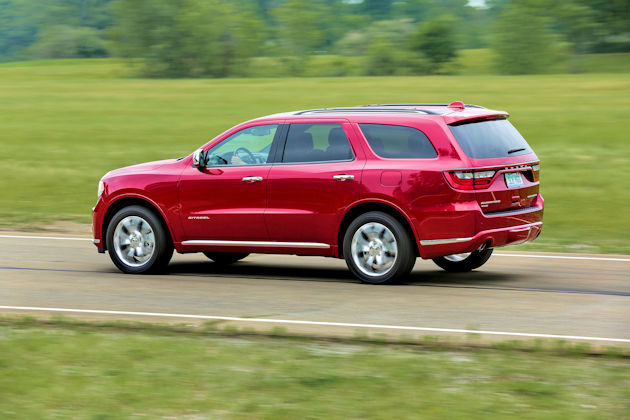 The 2017 Dodge Durango prices range from $31,090, including the destination charge, for the rear-wheel drive SXT up to $48,785 for the Citadel Anodized Platinum model. Fully loaded the Platinum model peaks at near $52,000, which is a bargain when you consider how well-equipped and impressive it is. This is a must drive for full-size SUV shoppers. 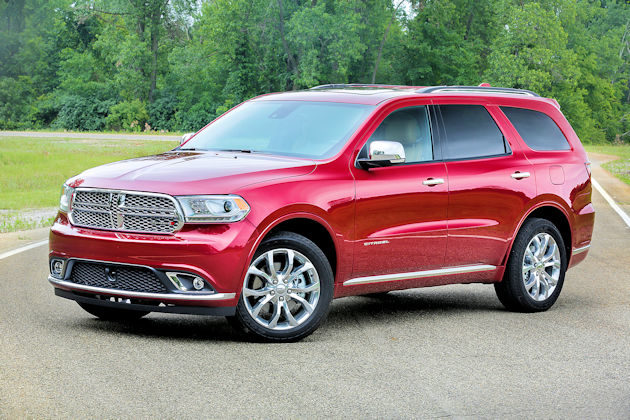 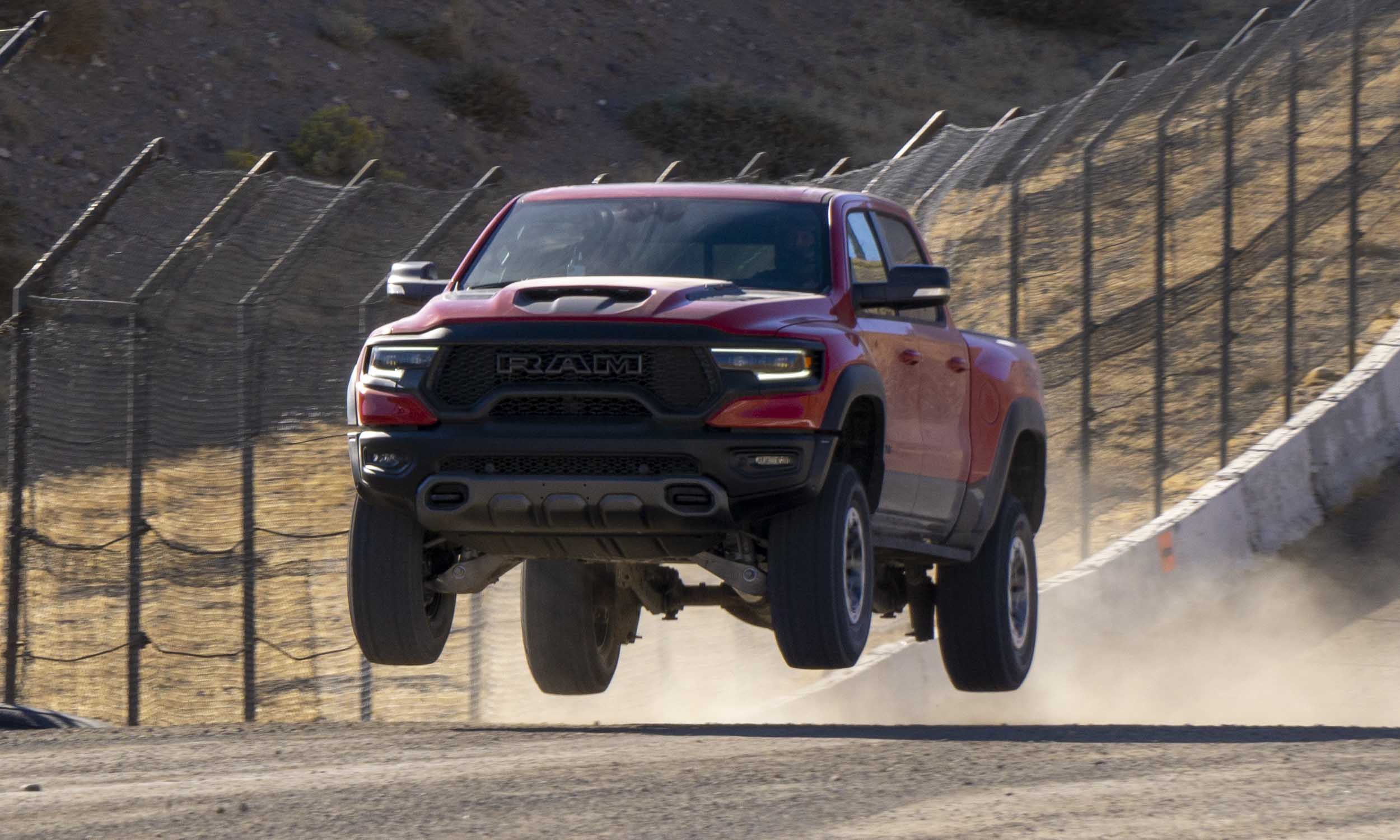 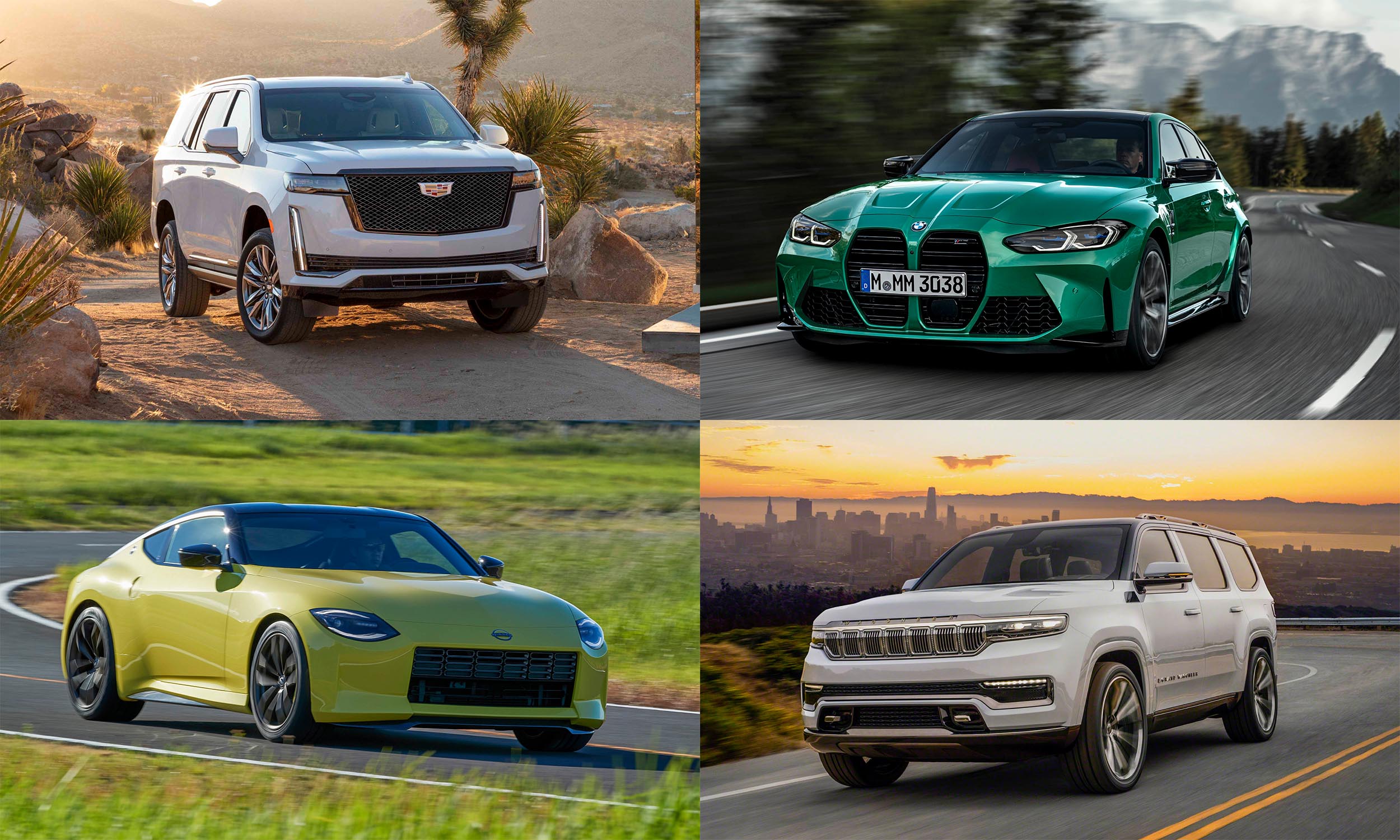