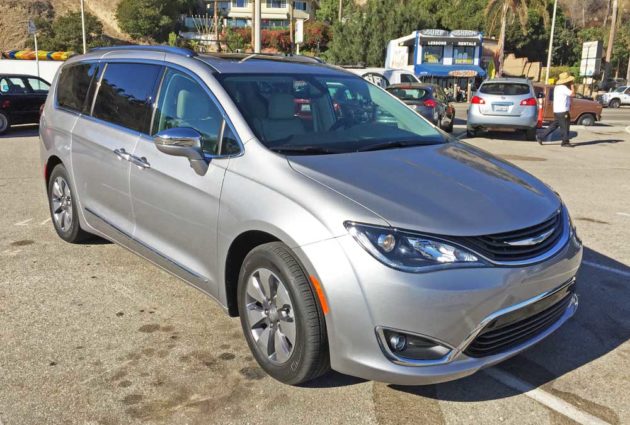 After creating a brand new automotive segment over 30 years ago with the introduction of the very first minivan, FCA (Fiat Chrysler Automobiles) has reinvented the minivan with the all-new ninth generation Chrysler Pacifica for 2017, and has added its first hybrid to the lineup – the Chrysler Pacifica Hybrid. 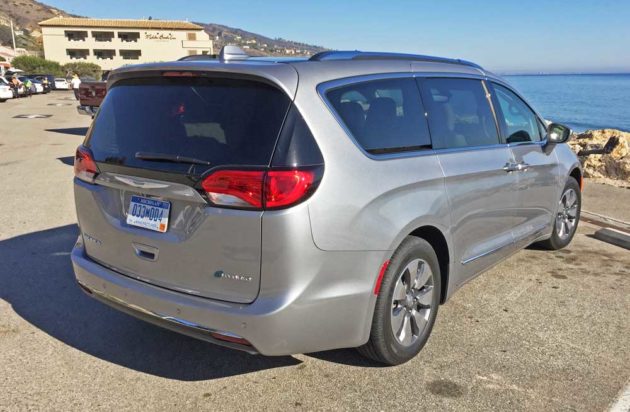 The Pacifica has emerged as an all-new platform replacing the outgoing premium Chrysler Town & Country minivan. It bowed initially with 5 levels of trim or distinctively different models in terms of content, and is now joined by the Hybrid version. The trim levels include: The base model LX, followed by the Touring; the Touring-L, the Pacifica Touring-L Plus; and a flagship Limited model that comes with all the bells and whistles. The Pacifica went on sale in April of this year, while the Plug-in Hybrid version is slated to go on sale early in 2017.

For starters, all models will come in a FWD configuration, with the possibility of AWD being added later in production, except for the Pacifica Hybrid, which will only be available as a FWD vehicle. 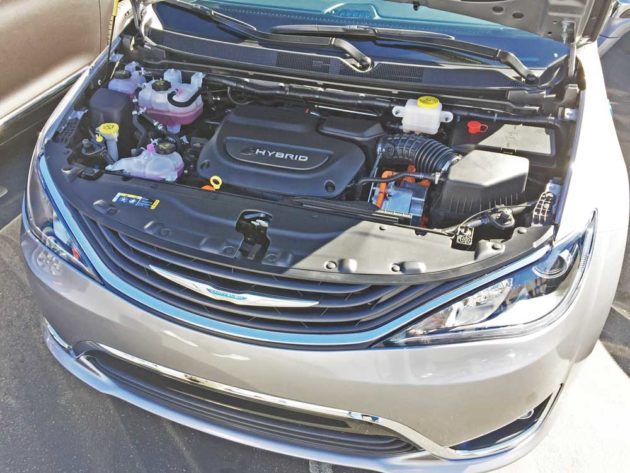 The Chrysler Pacifica and Pacifica Hybrid have been reengineered to deliver class-leading ride quality and handling characteristics along with reduced noise, vibration and harshness. and are set to revolutionize the minivan market with nearly 40 minivan firsts. To date, FCA US now lays claim to an unprecedented 115 significant minivan innovations.

Visually, the Pacifica delivers a sophisticated, sculptural exterior, with a bold athletic stance and aerodynamic profile that emphasizes an aggressive wheel to body proportion. Its long wheelbase, widened track and low ground clearance contribute to its sleek and futuristic image. 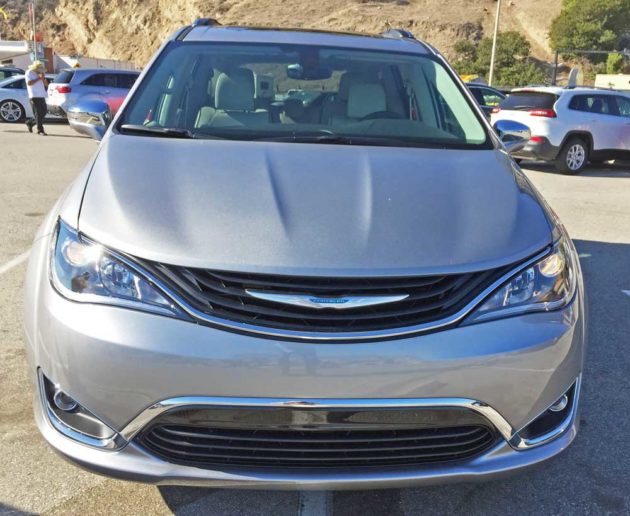 The Pacifica?s frontal view features the Chrysler brand?s contemporary face, with a graceful, flowing upper and lower grille. The slim upper grille flows smoothly into the headlamps, while the Chrysler wing logo floats within the mesh grille texture on gas models with a Blue field. The upper and lower grilles of the Hybrid both have wave-like horizontal bars, with the winged logo center appearing in Teal. Ribbon-like chrome accents that flow in tandem displaying a geometric balance and a premium appearance surround both grilles. A Mobius chrome strip cradles the available LED fog lamps and intertwine with the fog lamp housing and the lower grille.

The sculpted hood is robust with distinctive character lines leading the eye to the upper grille, and it shingles over for a clean, seamless appearance. The body-side sections are highlighted by an A-line that arcs gracefully from front to rear, tracing downward into the rear fascia and defining the rear quarter section. 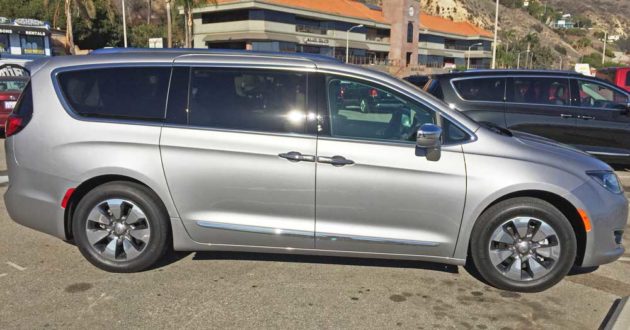 The sculptural nature of the Pacifica?s body section with its lower surface character line, combined with the A line and rear fascia surfacing, add to the Pacifica?s overall fluid-like surface that dances with layers of light from virtually every angle. A visually stretched daylight opening defines the upper canopy that is accented by a chrome surround, which, as it travels aft, thins and thickens as if drawn with a brush. The sliding door track lines are cleverly hidden beneath the rear-quarter side glass, resulting in virtually invisible tracks.

From the rear, the Pacifica?s fluid appearance becomes increasingly evident, with a roof that blends into a sculpted, integrated rear spoiler at the rear-most trailing edge. The forward-swept D-pillars accentuate the faster side and roof profile. The rear liftgate glass is ?tucked? into and offset from the D-pillars, with the liftgate glass integrated seamlessly into the tail lamps for a unified effect. As with the front fascia, the rear fascia projects simplicity and sculpture, with a minimized rear bumper shelf that helps to marry the liftgate and rear fascia. The rear fascia features an integrated black valance panel that includes rear reflex and a bright chrome horizontal detail to visually lighten the rear of the vehicle, enhancing Pacifica?s wide stance. Horizontally oriented tail lamps feature an LED ?halo signature? with an even glow for a modern appearance. The tail lamps are integrated into the rear backlight and are extended outward. 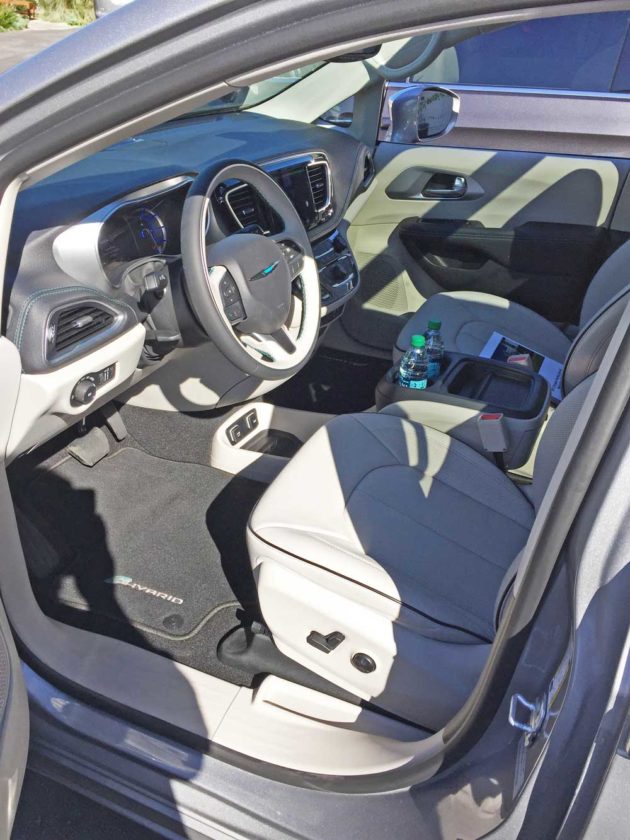 Moving to the inside, which is horizontally drawn, emphasizes the
spaciousness of the vehicle, while mixing high-tech elements with a sculpted,
flair. Outlets appear more formal, highlighted by a simple thinner chrome ring
for a precise feel. Bezels feature a similarly weighted accent. Modern color and material trim combinations are highlighted by unique interior accents
in the doors and instrument panel. These interior environments were inspired by various locations in the United States. The tone-on-tone control knobs in the
center stack feature a spun finish, reminiscent of high-end audio equipment.
The Uconnect touchscreen ? available as either a 5-inch or 8.4-inch ? is set flush with the instrument panel for a clean, technical look. With a glossy screen surface that allows for higher contrast, the touchscreen feels futuristic and in line with other modern devices, like a tablet. 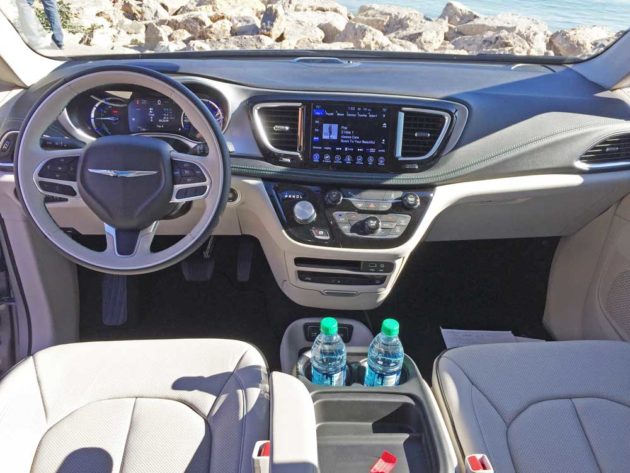 In daylight, the interior is all about beauty and sculpture, with the instrument panel?s defined, fluid surface at the center of it all. On upper trim levels, a stitched instrument panel adds an even higher touch of adornment. At night, the interior evokes a different emotion with a more high-tech look, with white lighting on buttons and the cluster display glowing with ?Chrysler blue.? Hybrid models display Teal accent lighting and steering wheel logo center. Other Hybrid control elements also use Teal lighting, versus the traditionally used amber, for a more cohesive and technical look.

The spacious interior delivers best-in-class front-row and third-row legroom, and an available tri-pane panoramic sunroof that adds to the feeling of openness, with a dual-pane panoramic sunroof over the front- and second-row seats and fixed glass pane over the third row. The HVAC controls are consolidated in the headliner, running cleanly along the rails. In the rear, the HVAC controls are on the passenger side headline ? a thoughtful consideration.

The Pacifica?s innovative Stow ?n Go floor bins offer storage when the second-row seats are not stowed, and the enhanced Stow ?n Go system features redesigned seats for added comfort and side support. The Stow ?n Go process has been improved so that the seats fold smoothly forward into the tubs, while the addition of the all-new Stow ?n Go Assist feature helps to further simplify the process. With the press of a button on the B-pillar, the front seat moves forward to allow the second-row seat to be stowed. Pressing the button again moves the front seat back to its starting position. In addition, the Easy Tilt second-row seats allow for easy access to the third row, even with an empty child seat installed in the second row. Seating delivers even more functionality with the addition of the available eight passenger seating. The lightweight, removable eighth-passenger seat fits in between the existing second-row seats and functions as a large second-row armrest with cupholders when not in use. Hybrid models do not offer Stow?n Go seating due to the added batteries, but still provide accommodations for 7, in a 2/2/3 arrangement with the rear bench split into a 60/40 configuration. Cargo space remains uncompromised with the 16-kWh battery pack efficiently stored beneath the second-row floor 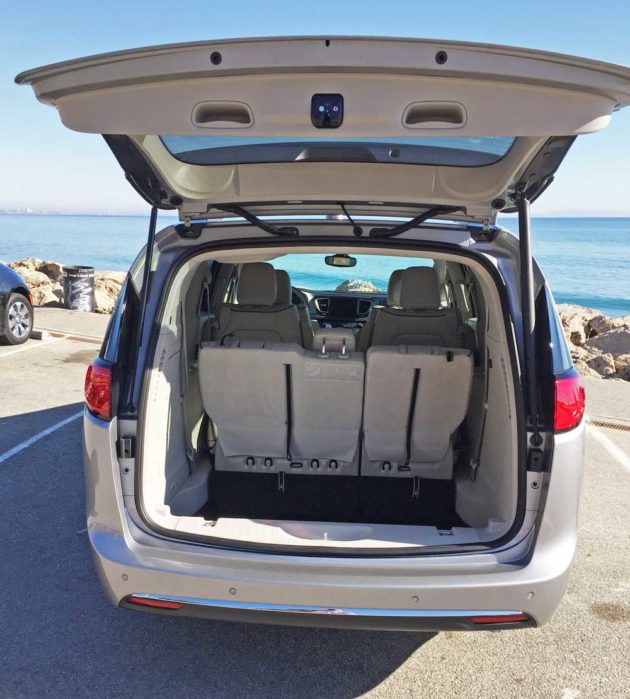 The Hands-free liftgate and side doors open and close by passing a foot beneath for added convenience.

My pre-production test Chrysler Pacifica Hybrid with the tri panel sunroof and 18-inch wheels and tires. It was sprayed outside in Billet Silver metallic and finished inside in Gray and Charcoal tones. The base price was ser at $37,895. While the final count and amount came to $42,170

SUMMARY: The 2017 Chrysler Pacifica Hybrid minivan delivers a luxury sedan-like ride, with comfortable and supportive seating, along with responsive damping. Acceleration is more than adequate with a broad torque range. The Pacifica delivers twice the torsional rigidity of the outgoing Town & Country for heightened stability. The 9-speed e-Flite automatic transmission shifted smoothly. There are so many creature comfort features included as standard fare in the new Pacifica Hybrid that it is truly a marvel in family transportation, delivering what may well be the ultimate in functionality and versatility.

Automotive journalists were given the opportunity to put the new Pacifica Hybrid through its paces in a variety of scenarios. with a challenging ride and drive on crowded freeways and over twisting mountain roads.

Think of the Pacifica not as a ?Soccer Mom? van of old, but as an efficient, fully equipped adventure pod for the entire family and all their gear. EPA mileage estimates had yet to be certified as of this writing, but the all-new 2017 Chrysler Pacifica Hybrid, the industry?s first electrified minivan, will deliver an estimated range of 30 miles solely on zero-emissions electric power from a 16-kWh lithium-ion (Li-ion) battery. In city driving, it is expected to achieve an efficiency rating of 80 miles per gallon equivalent (MPGe) based on U.S. Environmental Protection Agency standards. When the battery?s energy is depleted to a certain level, the Pacifica Hybrid becomes a part-time electric vehicle, like a conventional hybrid. Power to the wheels is supplied by the electric drive system or supplemented by a specially adapted new version of the FCA US Pentastar 3.6-liter V-6 engine.
The battery pack may be fully recharged in as little as two hours using a 240-volt level 2 plug-in system or in roughly 14 hours using a standard 110V household plug. It is in reality a plug-in electric vehicle that eliminates ?range anxiety? with the standard V6 gas engine. 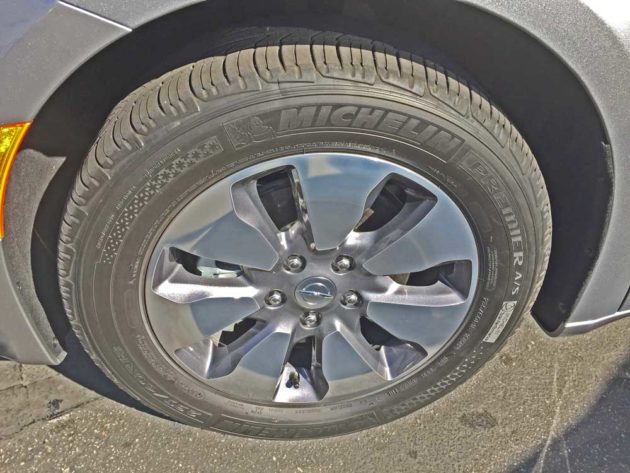 It is estimated that Minivan drivers travel an average of 30 miles each day, meaning that most Pacifica Hybrid owners will be able to complete their daily activities solely on electric power, but for longer trips, the 30-mile all-electric range combined with a full tank of fuel will deliver an expected total range of 530 miles. The Pacifica Hybrid is capable of a top electric mode only speed of up to 75 mph.

The Pacifica Hybrid has a wealth of content and features offered at affordable prices, and due to its added 613 pounds mounted low seems to handle better than the gasoline version.

The 2017 Chrysler Pacifica Hybrid is built on the same line as the gas models at the Windsor Assembly Plant in Windsor, Ontario, Canada. 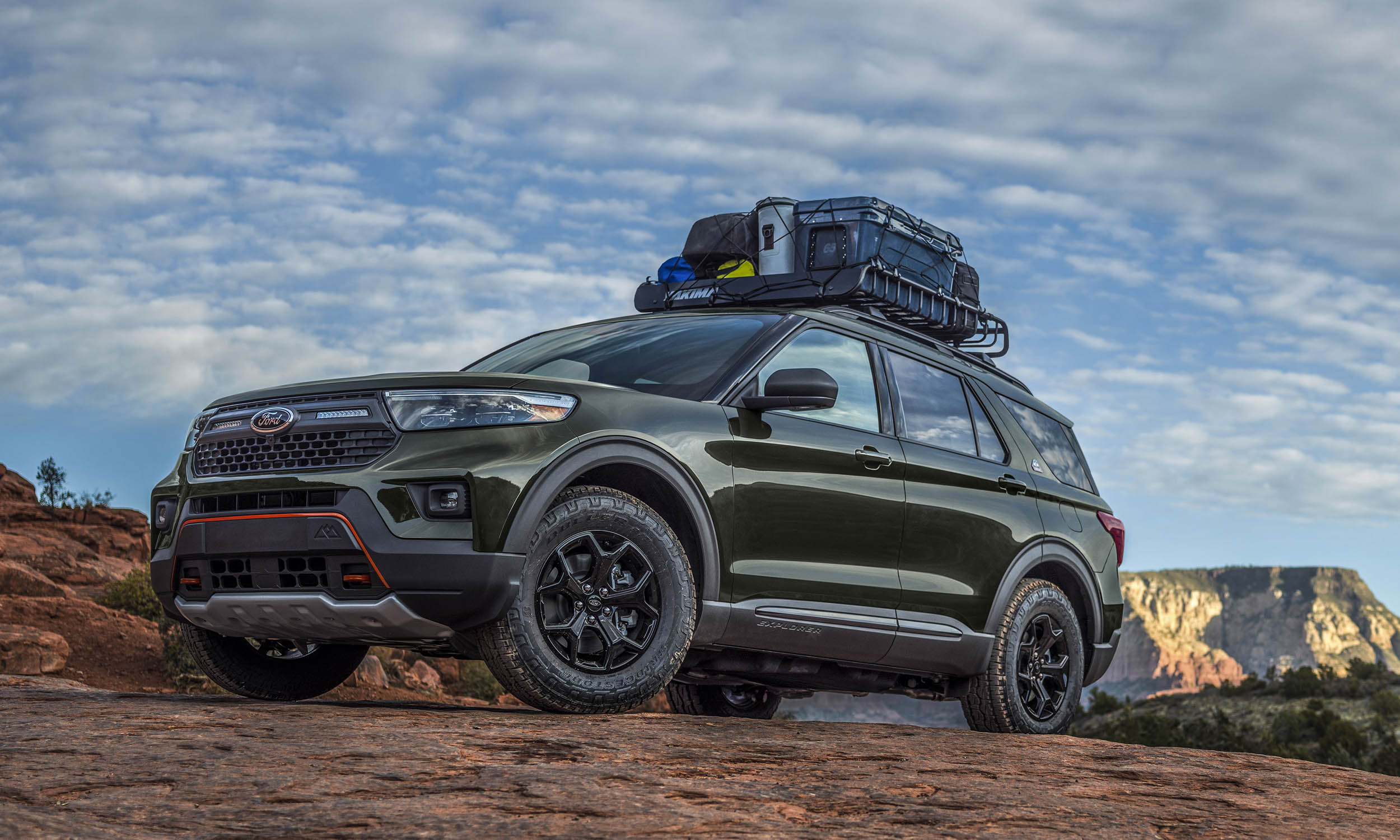