?2017 Audi A4 Sedan?
Delivering the Best in virtually Every Detail 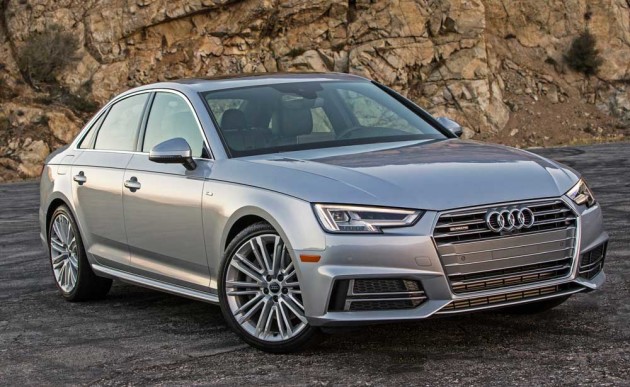 Audi of America begins its 9th generation of the Audi A4 sedan in its 2017 model lineup, which will consist of three different trim levels: the Premium base model; the Premium Plus model and the flagship model, the Prestige. Pricing will range from $37,300 for the Premium FWD model to $48,000 for the top-of-the-line Prestige model, which comes with quattro , Audi?s all-wheel drive system. Add a $950 Destination Charge for all. The base sticker for the entry-level trim is actually $1,400 less than the previous year?s starting price. 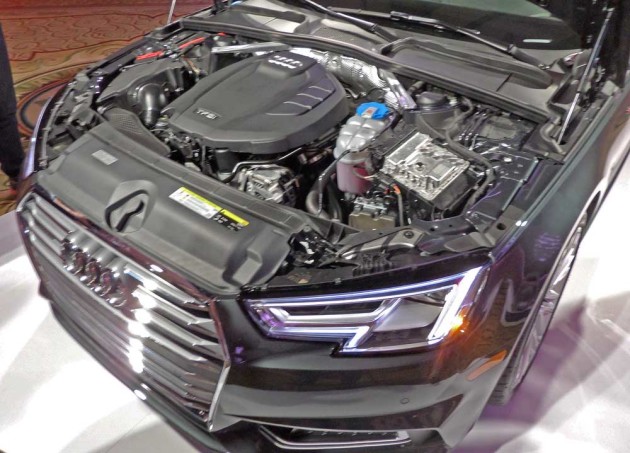 Powering all models is an evolved, redeveloped, 2.0 TFSI, DOHC, 16-valve turbocharged inline four-cylinder engine that produces 252 horsepower in a range from 5,600 to 6,000 rpm, while developing 273 pound feet of torque from 1,600 to 4,500 rpm. Energy from the longitudinally mounted front engine is geared to the driving wheels through a seven-speed S tronic Dual Clutch Transmission (DCT).

The new A4 steps up to the plate ready to hit a home run in every category, including: Driver Assistance technology; Design; Connectivity; and Performance. Audi provided a team of experts to preside over each category to discuss each topic in detail in 20-minute immersion round table discussions for small groups of journalists, which allowed for an enlightening and informative in depth awareness of each subject that proved to be a superior approach to the traditional singular Power Point presentation. The sessions preceded the actual driving experience of new A4s. 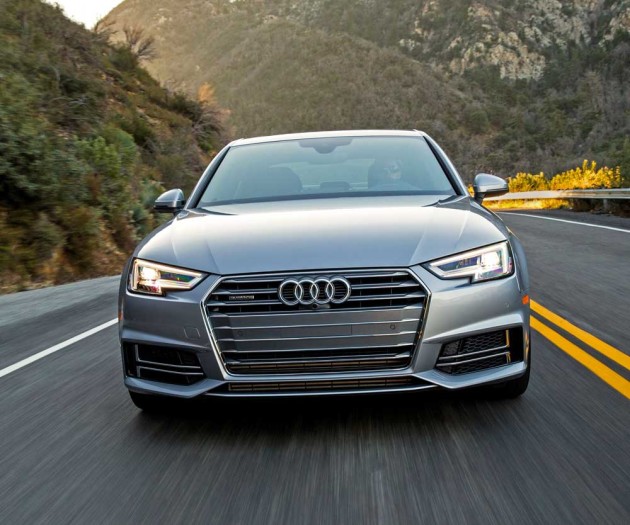 The four categorical discussions served to illustrate the role of the Audi A4 as a leader in Teutonic superiority. In terms of its design, the A4 showcases the latest refinements in styling, from the sharp wrap-around character lines emphasizing its length to the boldly pronounced wheel arches that heighten the vehicle?s visual appeal. The A4 was actually designed from the inside out, increasing interior creature comfort. Starting up front is Audi?s signature Sinfgleframe? grille, with an Aluminum-optic surround that contributes to the car?s sporting character. There?s a newly designed clamshell hood that flows almost imperceptibly into the shoulder line, forming a double line to the taillamps. The available LED headlights feature a progressive undercut design providing a focused look and unmistakable image. 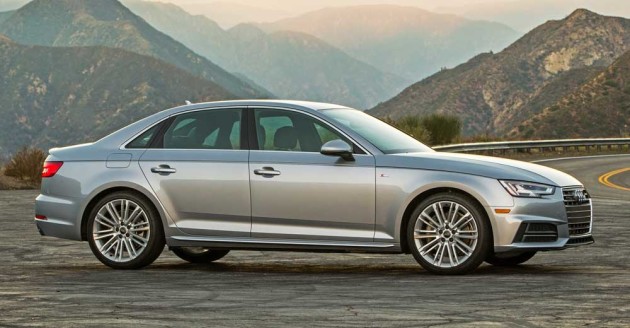 In profile, the A4 displays a lower, upswept rocker indentation and a gracefully arched roofline with blacked out ?B: and ?C? pillars with a bright chrome surround that gives the cabin an exaggerated length, with the sail panel slipping down the short deck lid with an integrated spoiler lip. The tail features a low and wide appearance with the wrap-around LED taillamps and a composite lower diffuser that houses the split dual exhaust. 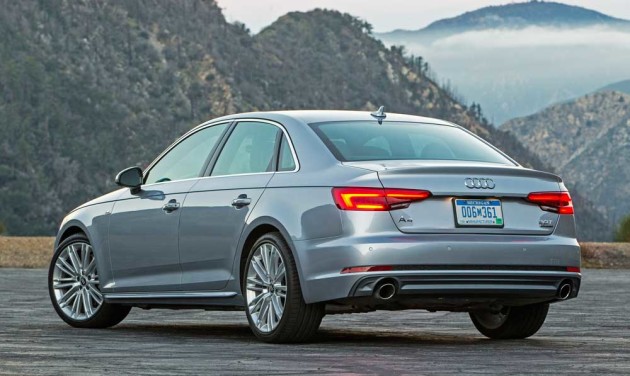 The interior presents a refinement reflective of the sumptuous A8. Great attention was given to functional improvements and added technologies that focus on the driver. Interior space is enhanced yielding more shoulder and head clearance for the driver and front-seat passenger, along with more rear seat legroom. The cabin design was based on a 3-line approach, with horizontal layers that are contoured for a better driver orientation. Significant features include: a three-spoke multifunction steering wheel; standard ambient LED lighting; standard three-zone automatic climate control with wing-design wrap-around dashboard and diffuser air vent helps recreate natural airflow; 8-way power front seats with a 4-way power lumbar support for driver; standard power sunroof with tilt and sliding functionality; and split-folding rear seatback with a 40/20/40 configuration that includes a center armrest and cup holders. 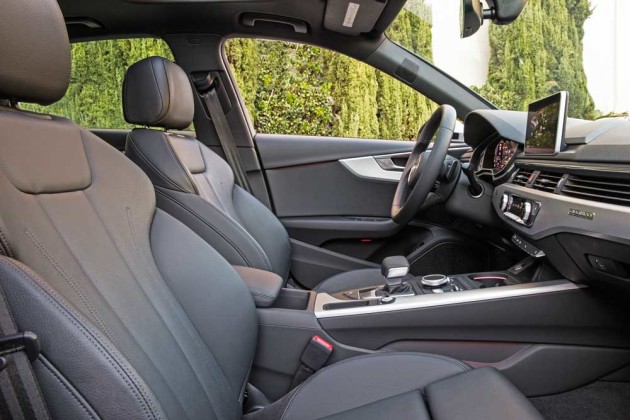 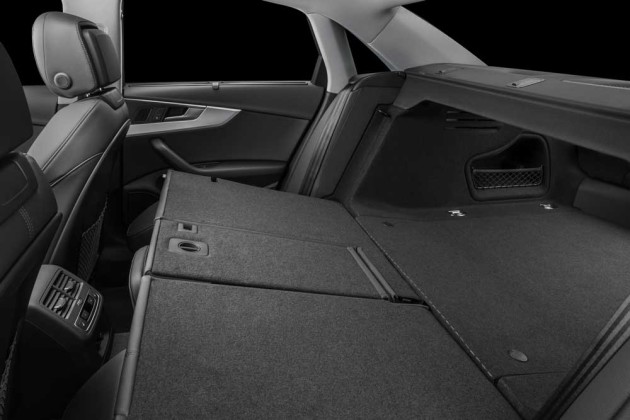 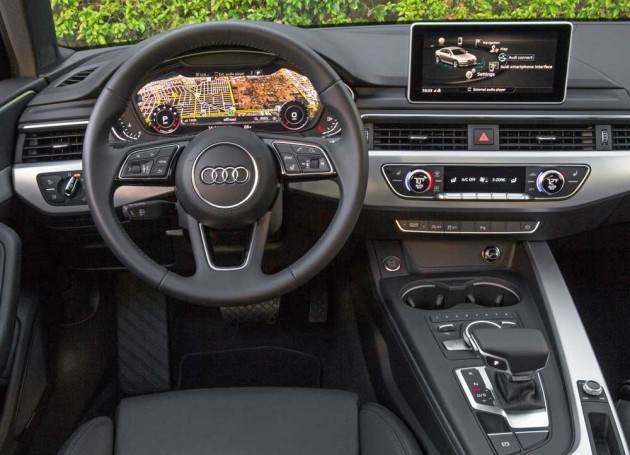 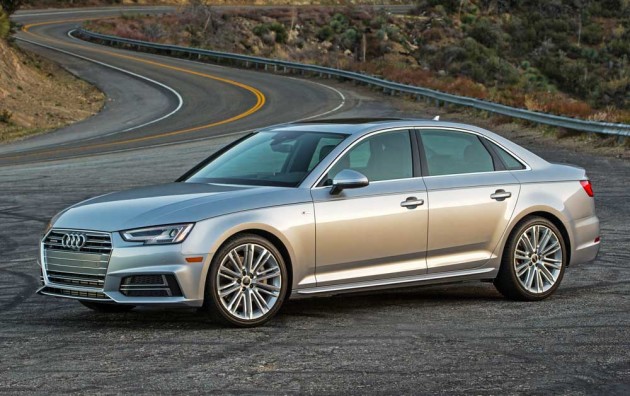 During the short lead press launch of the 2017 Audi A4 sedan, I was able to experience both a Premium Plus A4 and a Prestige A4 with quattro, spending the most time in the Premium Plus trim level which was FWD and featured a Manhattan Gray metallic exterior and Black interior. Its base stocker read $37,300. With an as tested price of $48,700. quattro is a $2,100 added feature. 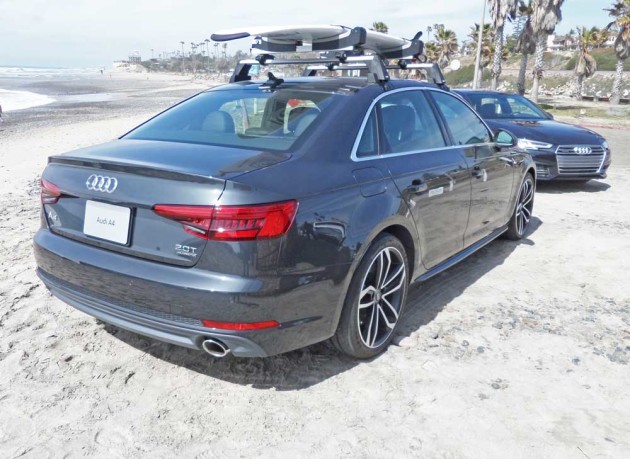 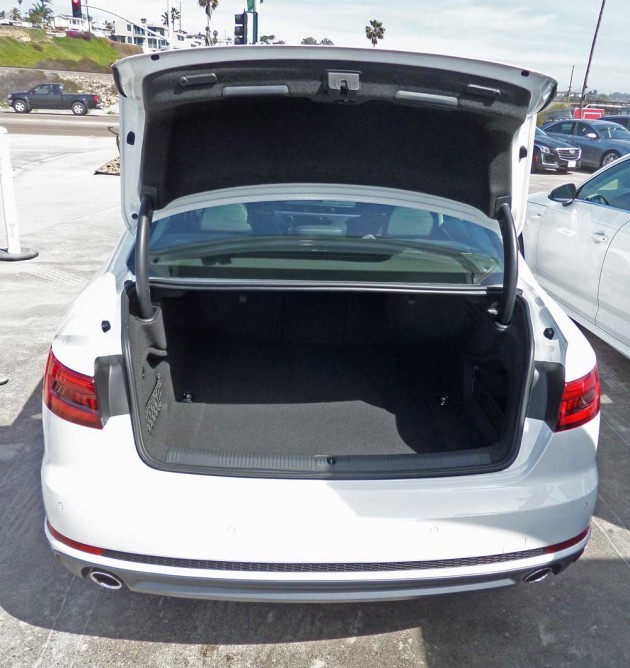 SUMMARY: The new 9th generation Audi A4 is a technological Teutonic marvel that has risen to the level of what the earlier Audi A6 used to be in terms of content and luxuriousness. The ride quality and comfort is superb in either the front or rear, with admirable support when maneuvering through twisting back road scenarios. 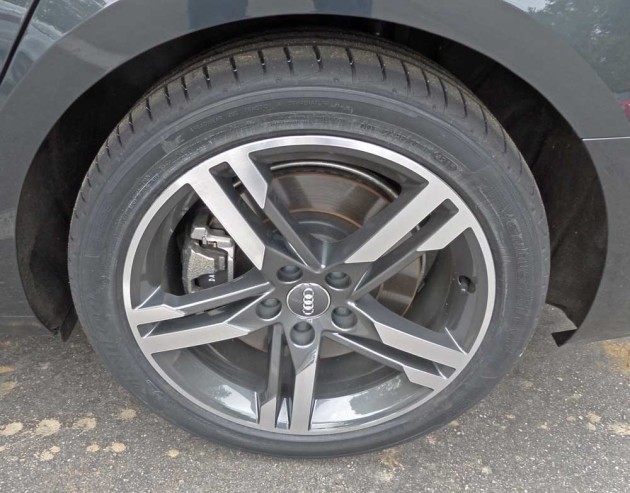 On the topic of maneuvering, the handling characteristics of this new A4 rate high enough to rival many sports cars, with a good on-center steering feel, and planted, road-holding stability.

The virtual cockpit feature enables the driver to focus on the road, rather than searching around for important desired information. Switchgear is simplified and intuitive, while enhancing the pure pleasure of driving. 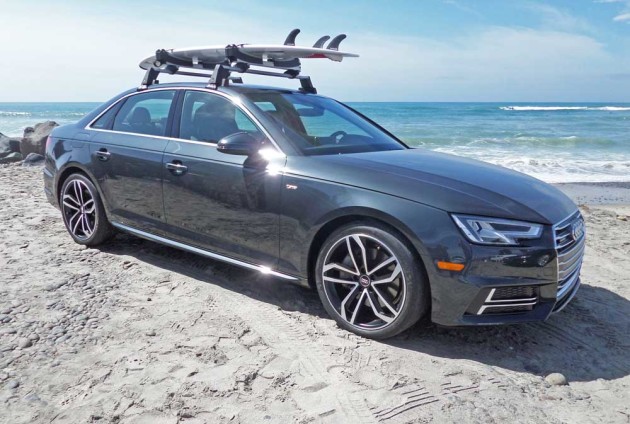 Audi has, in my opinion, long been underrated, and bottom line it would be difficult to find a more luxurious and sporty mid-size sedan than the 2017 Audi A4. It embodies appealing styling and confidence building behind the wheel for a reasonable amount of money. The Audi A4 for 2017 is unquestionably the best yet, but one has to wonder what is now to become of the A6. I suspect that it is destined to evolve to the level of the A8 at some point in the not too distant future. 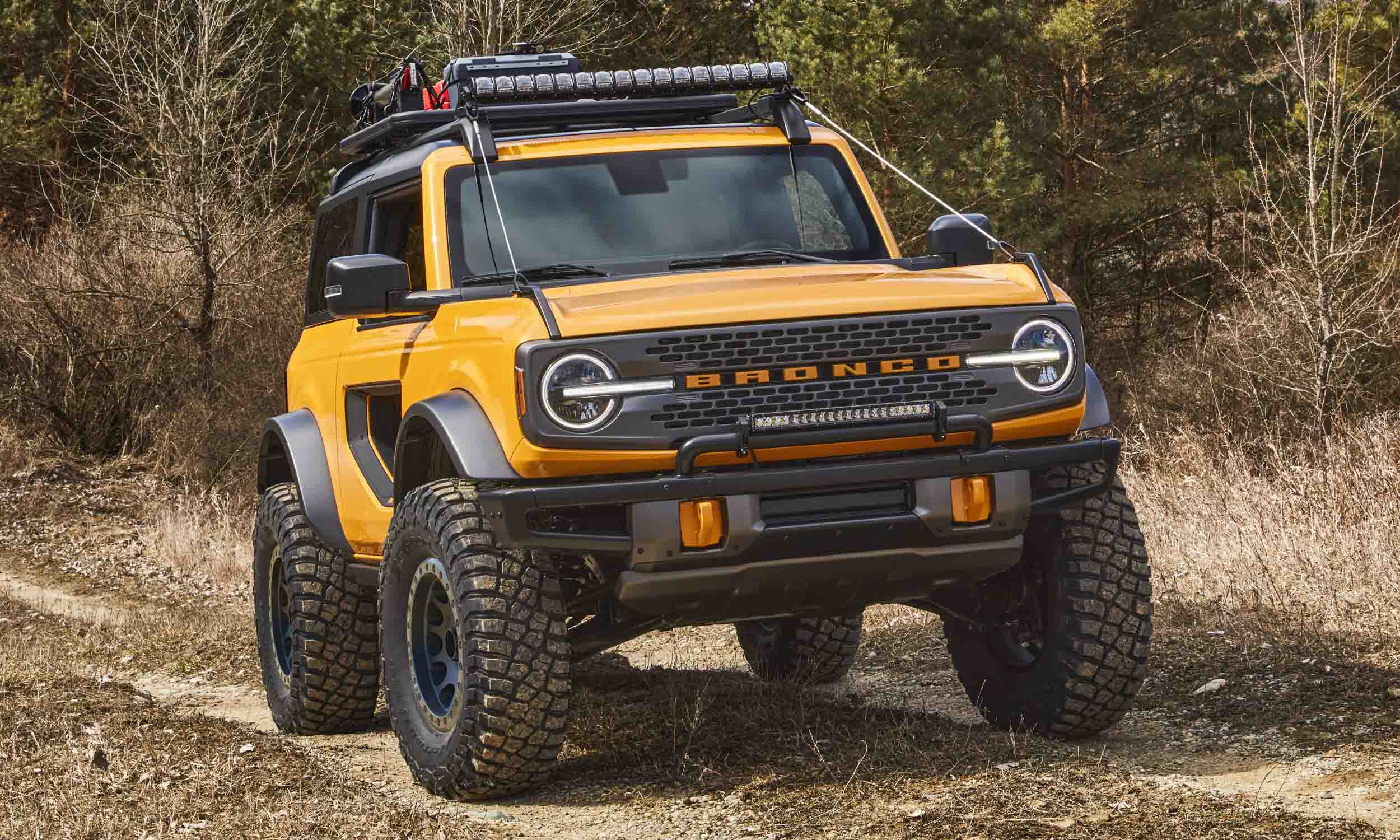