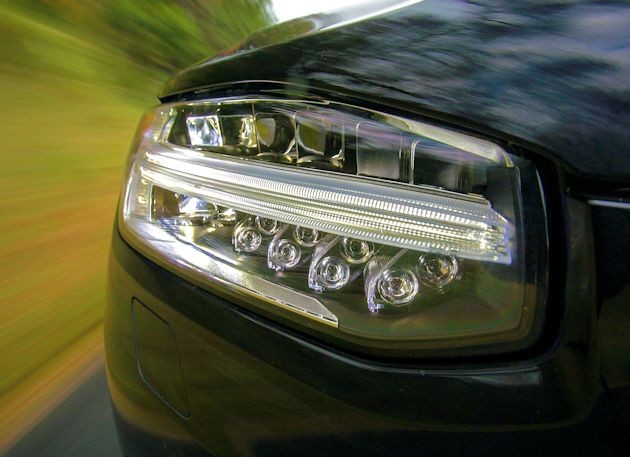 By Bill Schaffer
Los Angeles — While the rest of the auto industry was busy polishing their images, Volvo engineers were sweating over drawing boards (actually I think they use computers) reinventing the SUV, for a second time.

Volvo first reinvented the SUV in 2002 when they launched the original XC90. More car-like than the traditional truck-based SVUs, the XC90 took a fresh approach and created a vehicle that revolutionized the segment. It was more fun to drive and much safer than the others, too. The result was an award winning luxury SUV that gave owners an alternative to the dozens of traditional off-roaders. 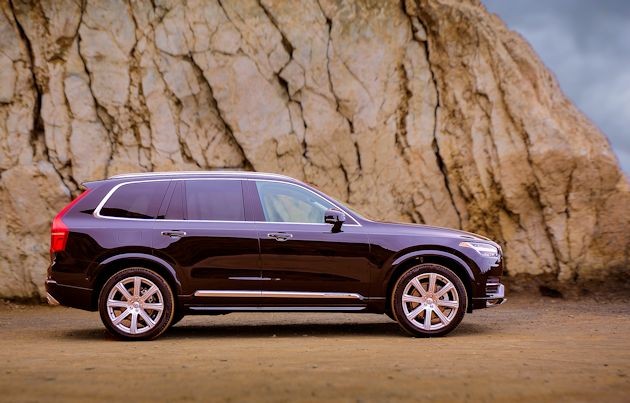 Volvo has gone through a world of change since that first XC90 model including another change in ownership, but their mission has stayed the same, as they tell their customers, ?We understand you. We protect what is important to you. We make you feel special.?

Literally new from the ground up, the 2016 Volvo XC90 is a clean sheet design from the new modular Scalable Product Architecture (SPA) platform, to the revolutionary Drive-E and Twin Engines, to the state of the art control systems, to the best seats in the business. 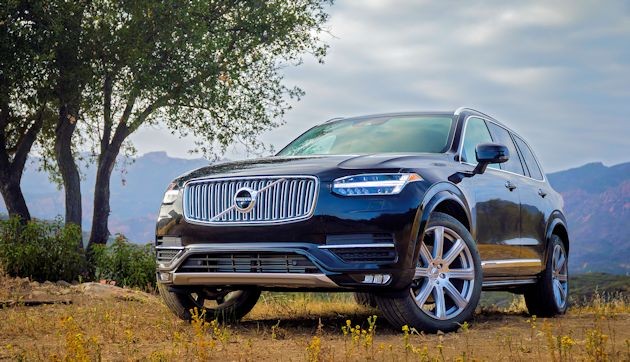 The 2016 Volvo XC90 resembles the original, but the new design has a more traditional SUV shape along with a new level of sophisticated elegance. The classic grille with the iconic arrow still proclaims ?Volvo? but it?s flanked by futuristic looking LED headlight pods each accented with a T-Shaped ?Thor?s Hammer? LED daytime running light (DLR). The DRL design creates a distinguishing look that, I?m told, will be the ?look? on future models. 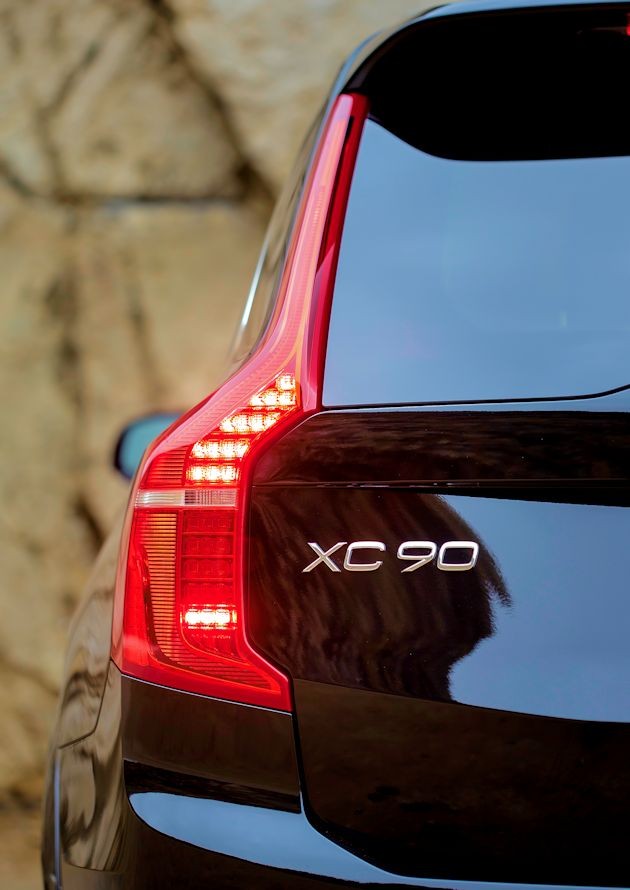 It?s difficult not to notice a Volvo wagon from the rear with its tall taillights that flow like a molten river from the top of the rear pillar to mid-liftgate. The new XC90 looks smaller, but it?s actually longer and has more interior space, and the result is an airier interior, partly thanks to the panoramic roof. 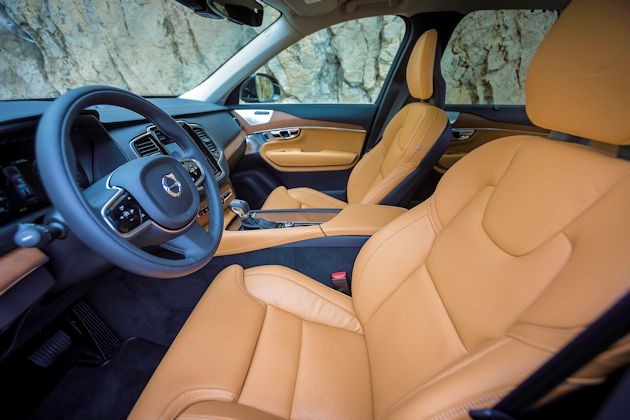 After doing car reviews for 24 years and hundreds of thousands of miles of seat time, I can say without hesitation that Volvo makes the most comfortable seats in the business. So, when they told us at the introduction that the seats in the new XC90 were all new I was nervous ? how do you improve on the best? The seven years of development time paid off — the new seats are did not disappoint.

In addition to being comfortable, ergonomically supportive and smaller in volume, the new seats have a multitude of adjustments, so an individual can create their ideal seating positon including adjusting the side bolsters and the length of the bottom cushions. The seats can also massage, heat or cool your bottom side and back. The second row is actually three individual seats that recline and can slide forward or back. Plus there?s Volvo?s integrated child booster cushion available in the second row center seat. 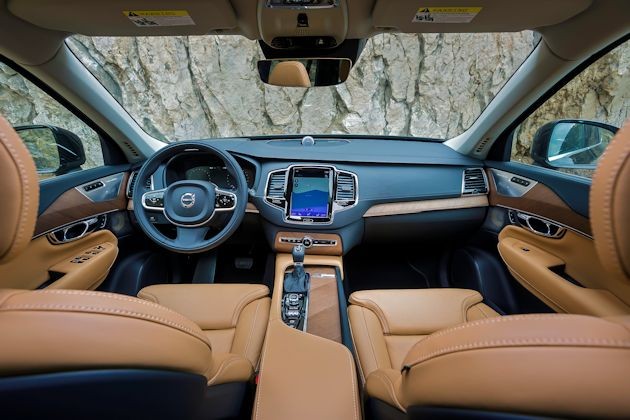 The interior design is brilliant with high-tech controls and high quality materials executed with a strong Scandinavian influence. The leathers are opulent and the wood, looks like wood, not just a glossy plastic-looking surface.

The most interesting new feature is Volvo?s Sensus user interface. The nine-inch color screen mounted in the center of the dash controls audio, navigation, communications and vehicle functions in an intuitive touch system that allows the driver to touch, drag, pinch and use all the other movements those of us with smart phones or tablets use on a daily basis. There?s no dial, touch pad or buttons, only a very easy to operate touch screen. The system responds quickly, too, so you don?t have to wait around for a reaction. 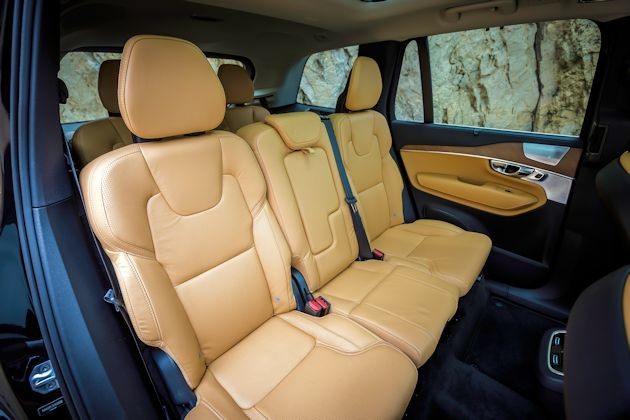 The instrument panel in the 2016 Volvo XC90 is state of the art too with a super sharp 12.3-inch color screen replacing the conventional instruments behind the steering wheel. Other features include power tailgate, an information system that reads road signs, lane departure warning, collision mitigation, HD Radio, satellite radio, panoramic sunroof, park assist, rear camera, leather seating and on and on.
Volvo is breaking new ground with a pair of new engine options. 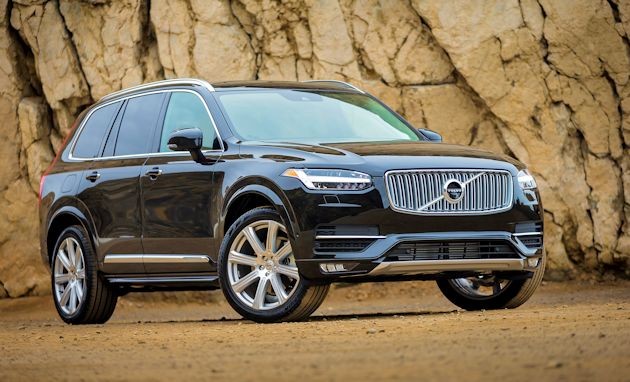 The popular engine will be the T6, a 2.0-liter supercharged AND turbocharged four-cylinder rated at 316 horsepower and 295-lb.ft. of torque. This is one of the most powerful four-cylinder engines on the market and it rivals other SUV?s six- and eight-cylinder engines for performance, and with cleaner emissions and higher fuel economy. The engine is mated with an excellent eight-speed automatic transmission which drives the standard all-wheel drive system. Zero to 60 mph acceleration is a quick 6.1 seconds and the EPA fuel economy estimates are listed at 20 mpg city, 25 mpg highway and 22 mpg combined. 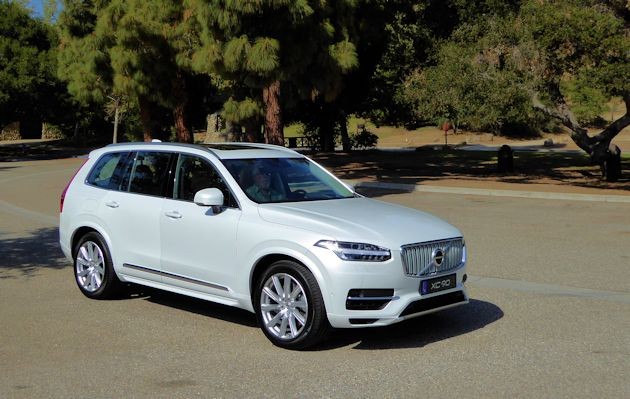 A second engine choice for the 2016 Volvo XC90 is the T8, which I got to drive briefly in Los Angeles traffic. Volvo calls the T8 a Twin Engine technology and says it?s the ?world?s most powerful and cleanest SUV.?
?The XC90 T8 is a plug-in electric car, hybrid car and high-performance car rolled into one,? says Dr. Peter Mertens, Senior Vice President Research and Development of Volvo Car Group. 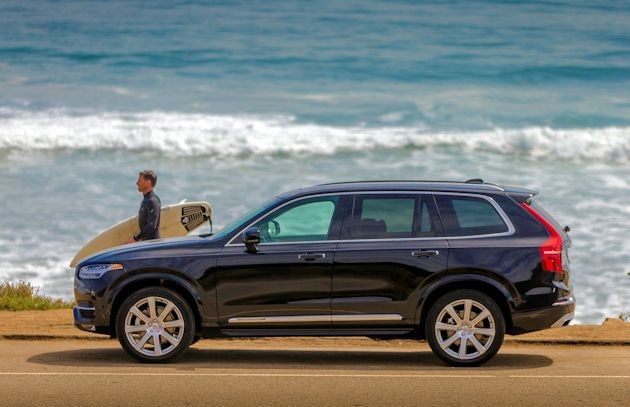 The T8 starts with the same four-cylinder Supercharged/Turbocharged Drive-E gas engine under the hood, and then mounts an 82 hp electric motor on the rear axle to drive the rear wheels. This allows the rear drive shaft to be eliminated replacing the mechanical component?s space with a battery in the tunnel so seating and cargo space is unaffected. With the battery mounted low and in the middle of the car, it lowers the center of further improving balance and handling characteristics; however it does add about 430 pounds to the vehicle. When all-wheel drive is needed, the electric motor supplies the rear axle.

Combined the motor and engine produce around 400 horsepower and improve 0 to 60 mph acceleration to 5.6 seconds. Fuel economy also jumps to an estimated 59 MPGe (miles per gallon equivalent). The electric power comes from the battery which is charged using a traditional electric vehicle plug-in, from regenerative braking and from a crankshaft mounted generator. The XC90 T8 can run on electric only with a range up to about 25 miles. A unique feature of the hybrid system is the driver?s ability to select and control various aspects of the power usage or let it work automatically. The T8?s hybrid technology may qualify for a federal tax credit of up to $4,600 and possibly some local and state incentives. 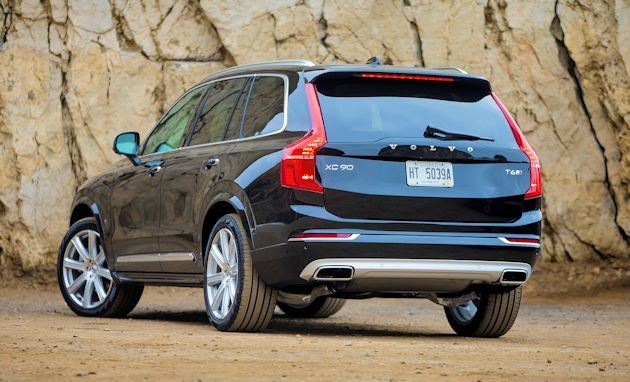 The 2016 Volvo XC90 lineup includes three trim levels (Momentum, Inscription and R-Design) with either the T6 or T8 powertrain. The T6 pricing starts at $49,895 for the Momentum, including the destination charge. This a full feature model with leather seating, the Sensus system and a boat load of features. The Inscription adds more conveniences, cosmetics, etc. taking the price to $55,495. The R-Design with some variations on extras is $53,895. The Twin engine T8 Momentum is priced at $69,095, the Inscription T8 is $72,495 and the T8 R-Design is $70,995. There are several option packages available at each trim level adding features like LED headlights, blind spot information, heated steering wheel and the Convenience package which adds things like adaptive cruise and parking assists. There?s also an over-the-top Bower?s and Wilkins sound system ($2,650) and 4-Corner Air Suspension with Four-C Active Chassis ($1,800) in the short single options list. An ?I want it all? ordering splurge can take the T8 price to near $80,000. 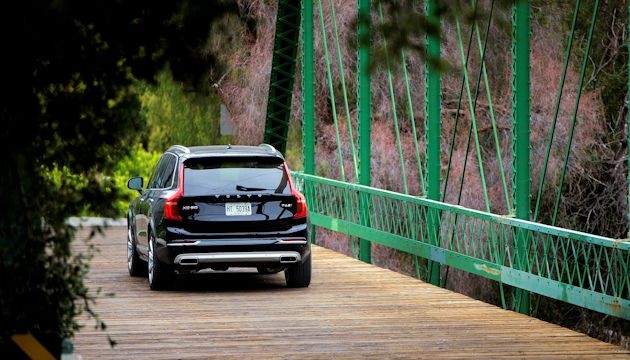 Volvo?s safety credo is best spelled out with their vision that by 2020 no one will be seriously injured or killed in a new Volvo.

Volvo is entering new territory with the XC90, but it?s also a whole new kind of SUV for the industry and should drive the Chinese-owned Swedish company into the lead on many fronts. The 2016 Volvo XC90 is a ?must drive? for anyone thinking about a new SUV or crossover purchase, or for that matter any new luxury vehicle. 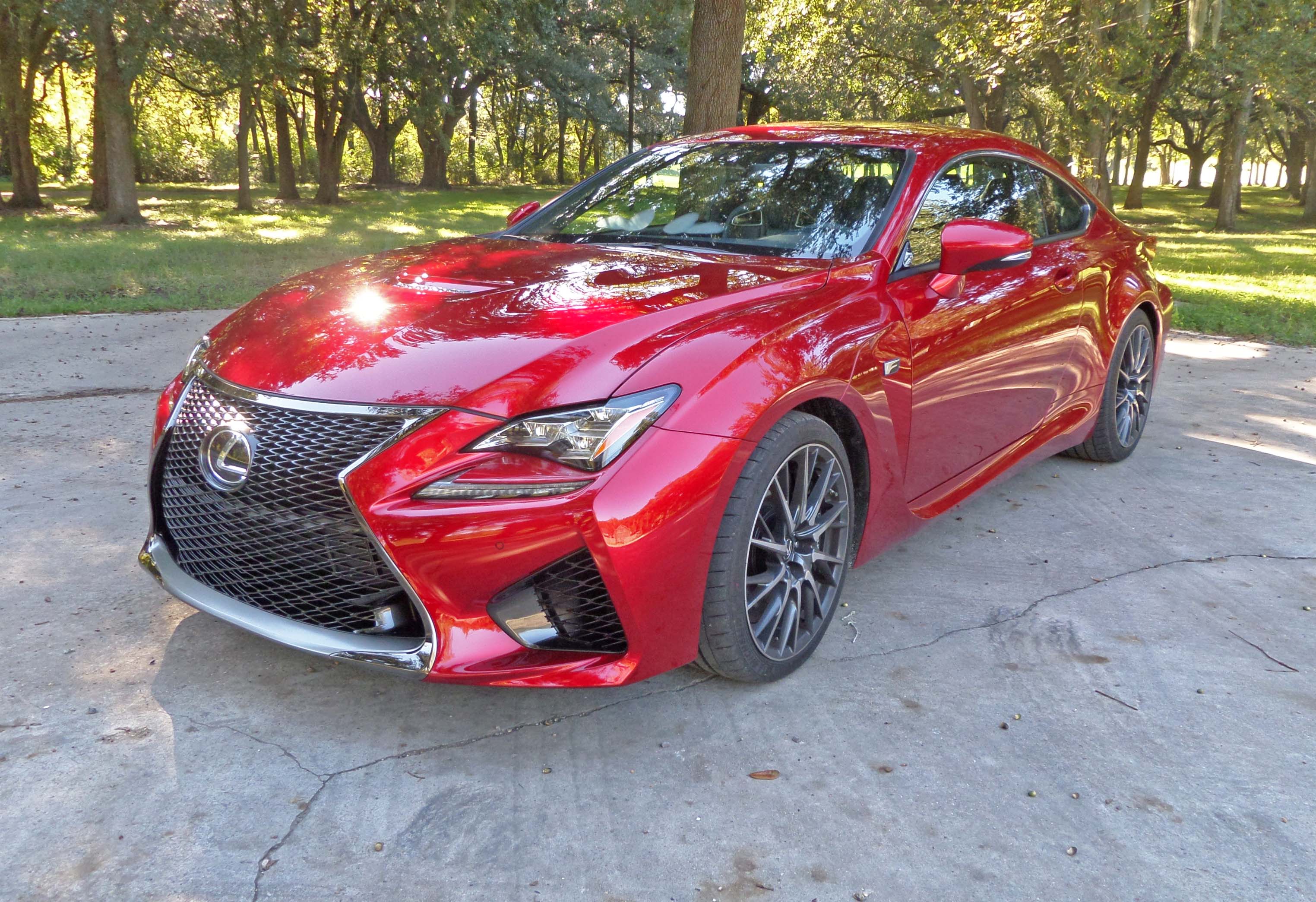 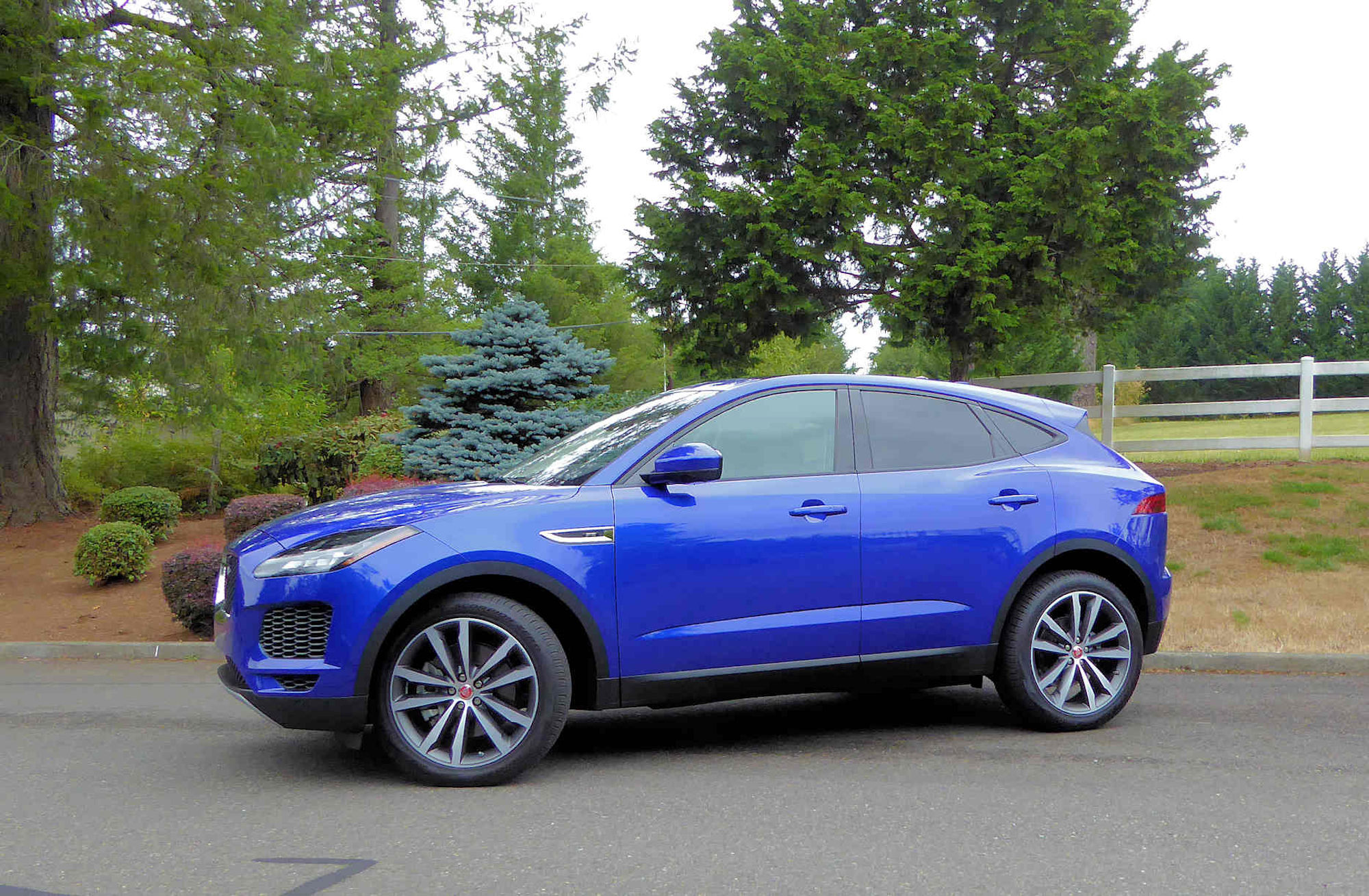