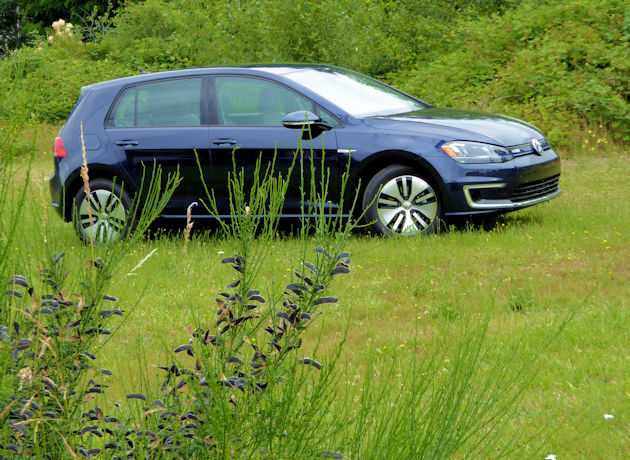 When Volkswagen entered the electric vehicle business a couple of years ago, they took the easy route. Many manufacturers started from the ground up to develop an electric vehicle, but Volkswagen simply converted one of the best compact cars in the business from gasoline power to electric.

We think that made perfect sense. Rather than reinventing the wheel, they simply added batteries and the result is one of the best, if not the best electric vehicle on the market. Obviously that is an oversimplification of building the e-Golf. We are sure converting to electric power is more complicated than swapping an engine for a motor and a gas tank for a battery. What Volkswagen did do was maintain the wonderful character and drivability of the electric version of the Golf. 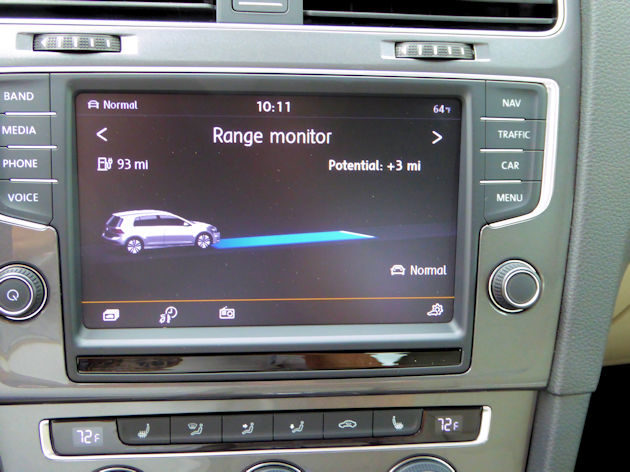 Driving the e-Golf felt very much like driving a regular Golf, only it wasn?t quite as fast, it is much quieter and the biggie, no gas. We could spend a few hours running errands and come home open the charger port and plug it in. The next morning, unless we had run the battery too near empty, we were fully charged and ready for another exciting day of motoring ? about 93 miles, according to the range gauge. 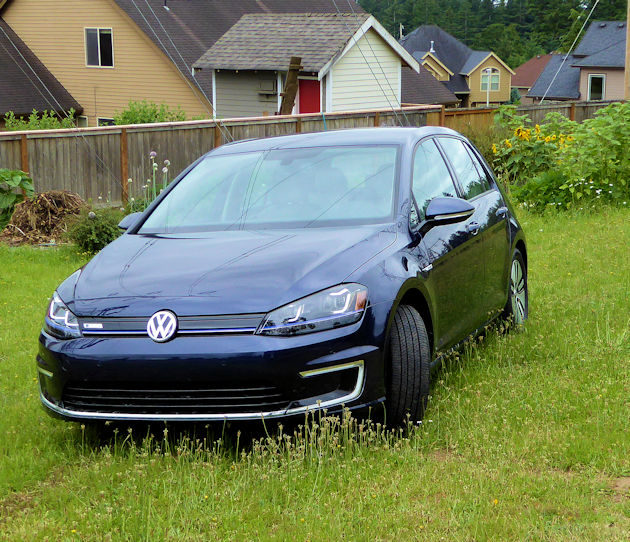 The Volkswagen e-Golf shares its design and most components with the other four-door Golf models, it?s difficult to distinguish it from the other models. It uses energy efficient LED headlights and it also uses C-shaped LED daytime running light strips in the bumper below. Other clues that this is an all-electric VW are the unique badges and blue accents, as well as the obvious lack of any tailpipes at the rear. 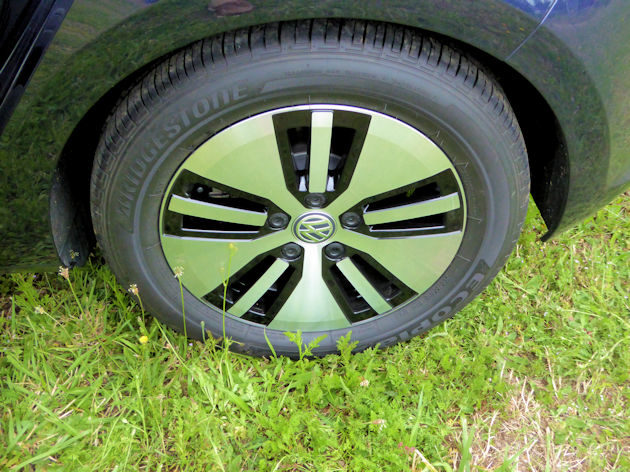 To maximize its aerodynamic efficiency, the e-Golf uses special aerodynamic 16-inch wheels which fit tightly with the wheel arches to improve airflow. Other aerodynamic improvements include low rolling resistance tires, a radiator shutter and grille, underbody paneling, rear spoiler and C-pillar air vanes. The net result is an excellent 0.27 coefficient of drag. 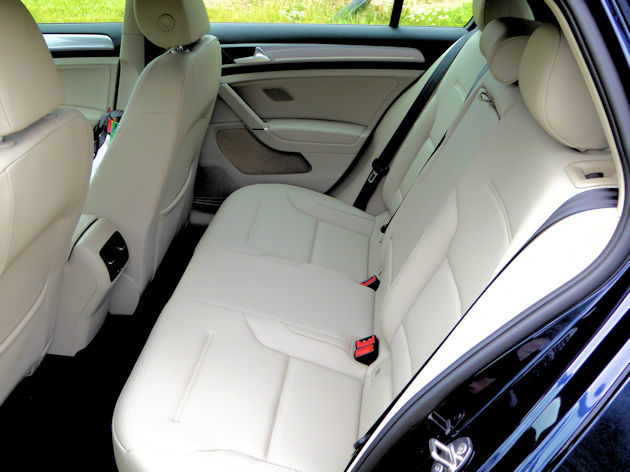 Inside, the e-Golf looks much like the other Golf models and the interior with no space taken up by the battery. Cargo space is 22.8 cubic feet with the rear seatbacks up and 52.7 cubic feet when the seats are folded. The instrument cluster has been redesigned for the electric vehicle?s informational needs. 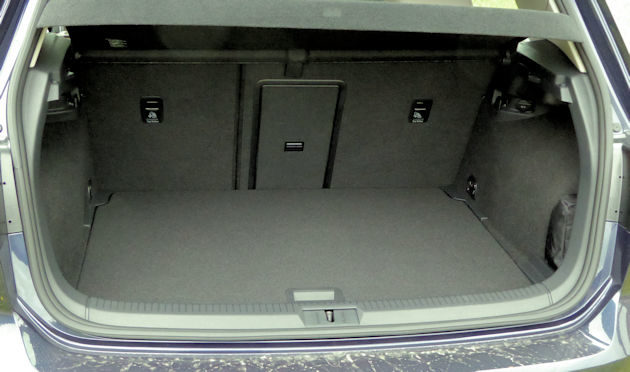 As with the other Golf models, the interior materials are high quality and it appears to be well-built. Because the engine sounds are eliminated, noise from the tires and wind in electric vehicles can be more noticeable so engineers fitted the interior with highly sound absorbent materials to create a cabin space quieter than many luxury vehicles. Because there?s no engine noise they also installed a low-speed sound system to help alert pedestrians to the vehicle. 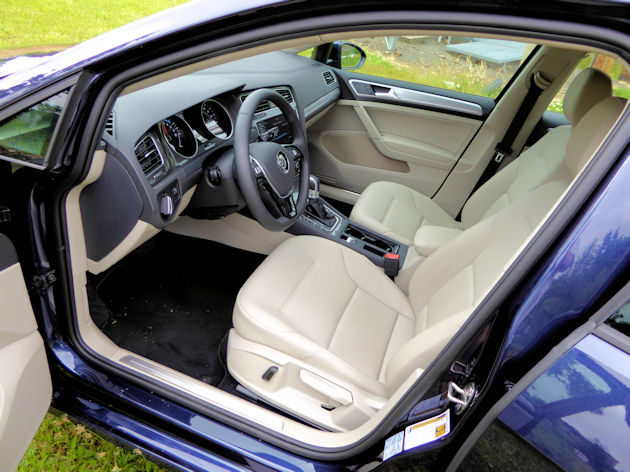 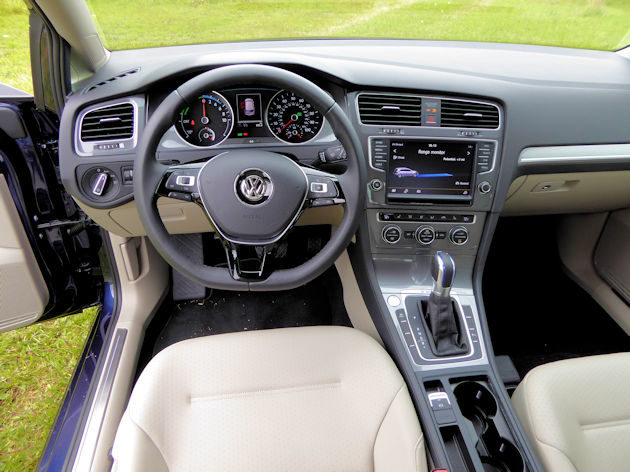 One of the most significant advances in the new e-Golf comes in the form of its new touchscreen infotainment center, standard on all models. Our SEL Premium test vehicle had the new 8.0-inch touch screen (the other models have a 6.5-inch screen) with capacitive touch sensor (as in smartphone and tablet technology) rather than the more common resistive touchscreens that require pressure, enabling gesture controls like swiping and even pinch-zooming. 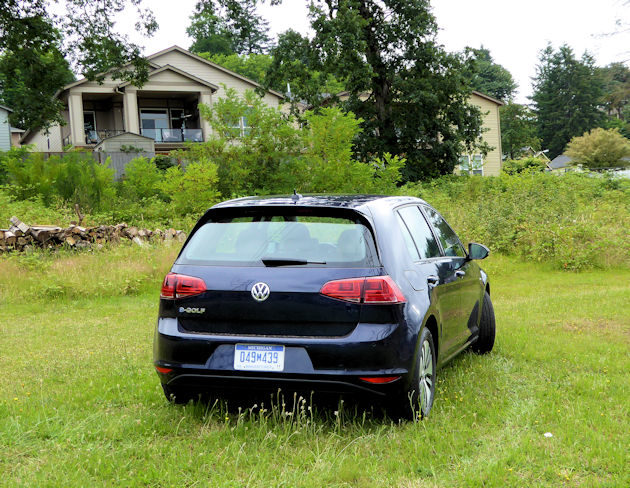 The e-Golf has a standard 7.2 kW on-board charger which enables e-Golf?s battery to be recharged three ways. The standard charging cable can plug into any 110/120-volt electrical socket and fully charge the battery in roughly 20 hours. Using a 240-volt plug-in, it gets the full 7.2 kW to charge a battery in less than four hours. The e-Golf is also equipped with a standard Combined Charging System (CCS) which allows the car to use the SAE standard DC fast charging infrastructure, which is available at some charge stations. It delivers direct power at up to 50 kW, charging the battery to about 80 percent capacity in roughly 30 minutes. 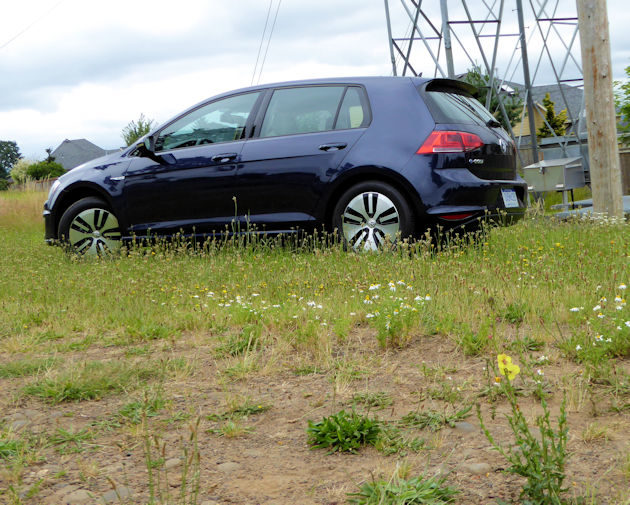 The Volkswagen e-Golf is powered by a lithium-ion battery, which is mounted in the car?s center tunnel just ahead of the rear axle and below the rear seats. The battery is composed of 264 individual prismatic cells, which are efficient enough that the battery doesn?t require any active cooling systems. Co-developed with Panasonic, the cells are integrated in 27 modules of either six or twelve cells each, which collectively produce a nominal rating of 323 volts and an overall capacity of 24.2 kWh. The battery has a limited warranty that covers eight years or 100,000 miles against 70 percent capacity.

The motor is a synchronous permanent-magnet alternating current (AC) motor, which operates at 12,000 rpm. The compact electric motor sends its power to the front wheels through a single-speed transmission; both the motor and transmission are designed and built by Volkswagen. In the standard drive mode, it?s capable of delivering 199 lb.ft. of torque and 115 horsepower. 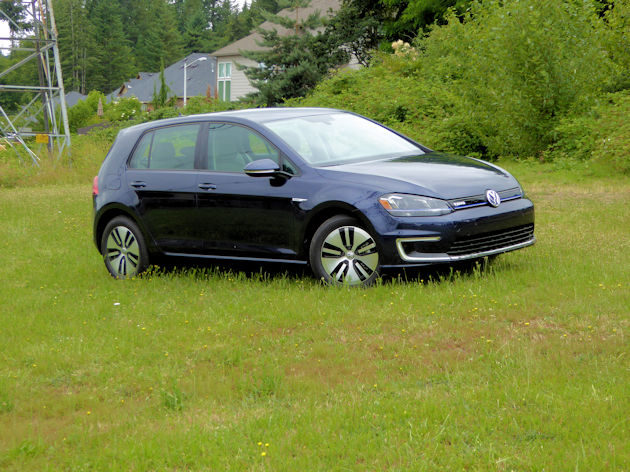 To save power during cold weather, the e-Golf has a new heat pump system which uses both ambient air and heat from the drive system components to warm the cabin rather than relying solely on the high-voltage heater.

The driver can select from three drive profiles — ?Normal?, ?Eco?, and ?Eco+?. In the ?Normal? mode the e-Golf accelerates to 60 mph from rest in 9.4 seconds and has a top speed limited to 87 mph. With the instant torque from the electric motor, the performance feels faster than the numbers indicate. The ?Eco? modes cut the power, acceleration and top speed, but extends the range. Regardless of the drive mode selected, full accelerator pedal ?kick-down? will result in the maximum power and performance of the ?Normal? mode. 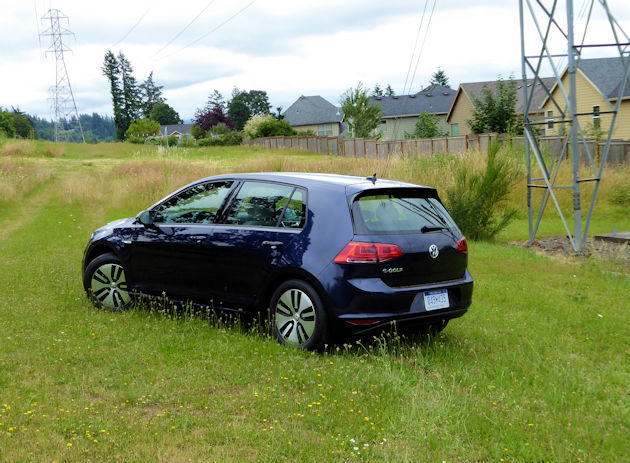 The EPA lists fuel economy as the equivalent of 126 mpg city, 105 mpg highway and 116 mpg combined. In electronic terms it uses 29 kW-hours per 100 miles. Transferred into dollars and cents, the 2016 e-Golf Monroney lists annual fuel cost of $550, saving $6,250 in fuel over a five-year period as compared to the average new vehicle. Think of it, that?s less than $50 a month for fuel.

The 2016 Volkswagen e-Golf is available in two trim levels. The SE with a starting price of $29,815, including the destination charge. The SEL Premium has a base price of $36,415, with all the available options the price is only $36,810.

Of all the competitive electric vehicles the 2016 Volkswagen e-Golf is one of our favorites because it is so simple and versatile. It works great when used in our Metro area, but we?d still need a second car for those road trips we love. 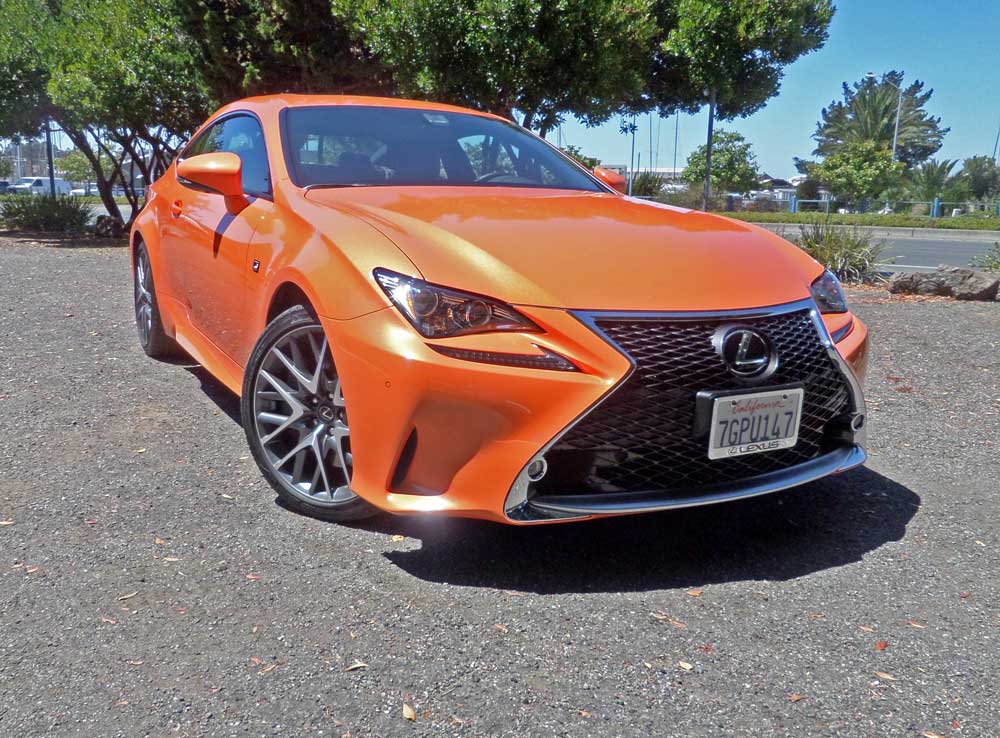 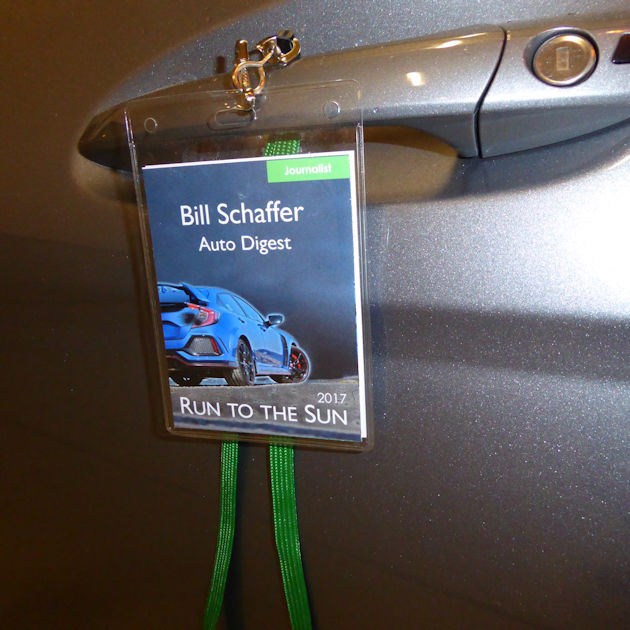