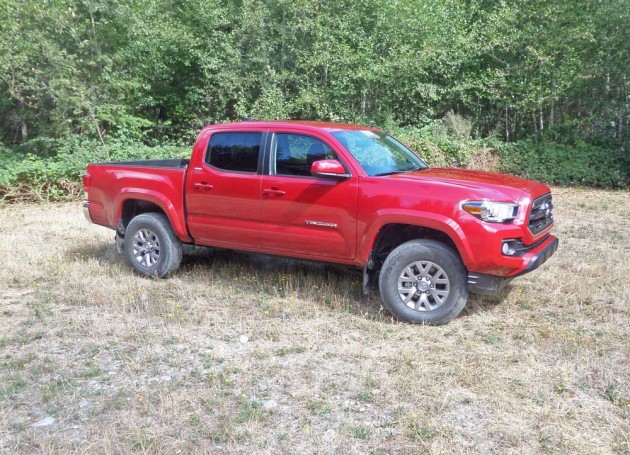 Seattle, WA. – A lot of things have changed in the all-new 2016 Toyota Tacoma, all of which seem to be really good things. Some things have not changed all that much, or at least not enough to be dramatically different. The Tacoma has pretty much owned the compact pickup truck market, since it first appeared on the scene, twenty years ago in 1995. 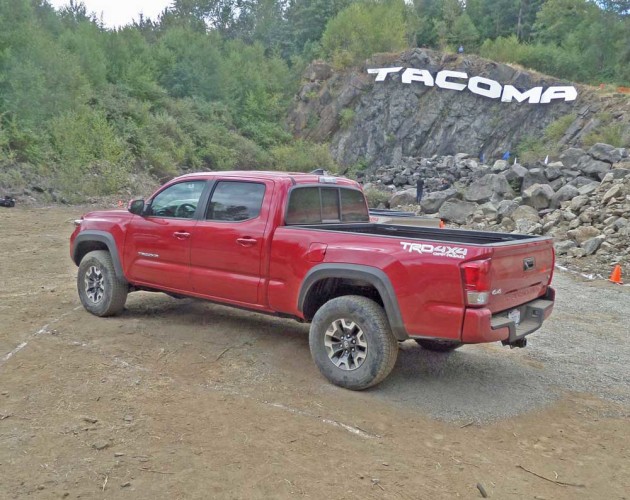 The first Toyota Tacoma came with a beginning price of $14,678. and was powered by a 2.4-liter, inline four-cylinder engine that yielded 11 mpg city and 9 mpg highway. Moving to the present, the Tacoma has a starting price of $24,200 (including the $900 destination charge) for an SR trim Access Cab with the base 2.7-liter inline four-cylinder motor, six-speed automatic transmission in a rear-wheel drive configuration. 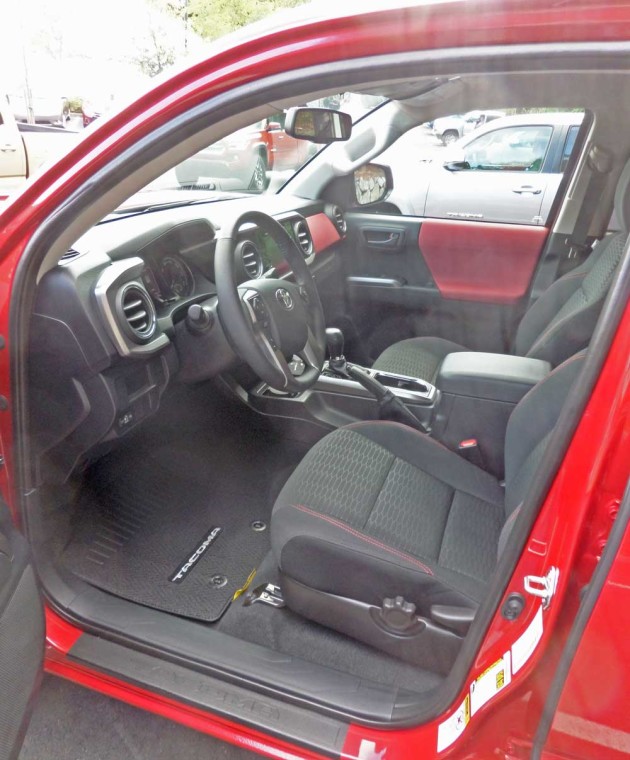 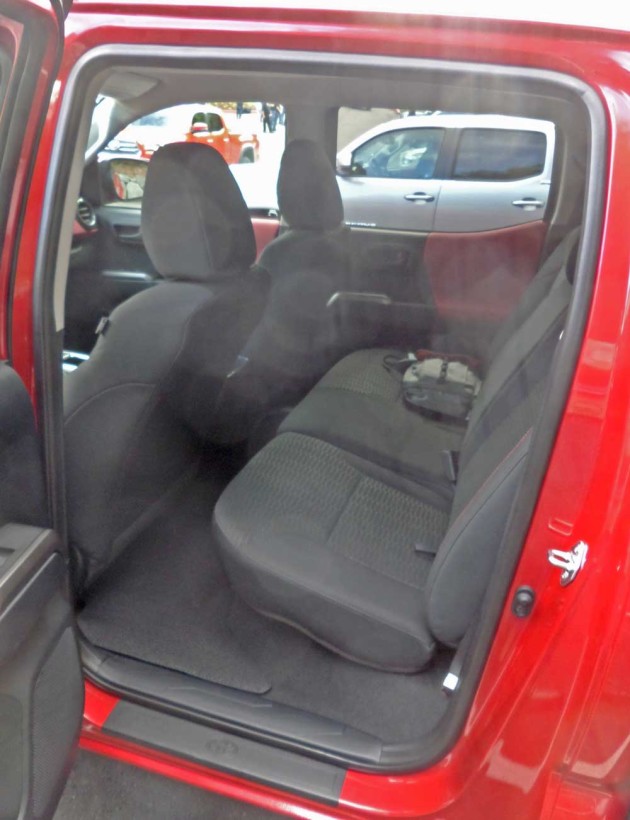 One of the very first things that I noticed was the seating position. My last recollection of earlier Tacomas was of nearly sitting on the floor with a relatively low seat height. The seat height has been raised, but so has the beltline, so the same sensation still exists although to a lesser degree. Other interior improvements are more pronounced and distinctive for each of the available trim levels offered. 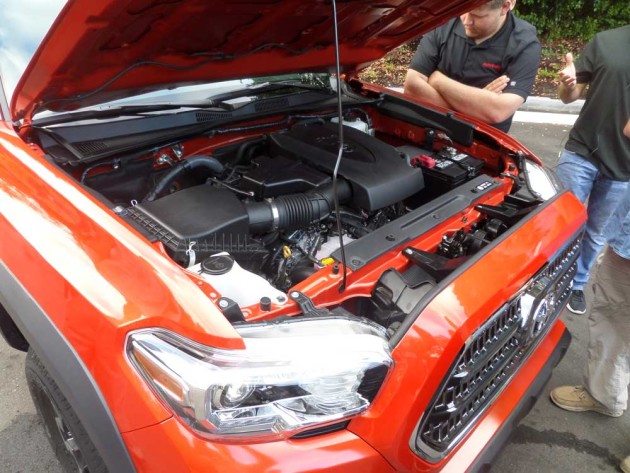 As already mentioned, the base engine is a 2.7-liter inline four-banger, but now, there?s a new 3.5-liter Atkinson Cycle, Direct Injection V-6 with D4S (Direct and Port Injection) replacing the 4.0-liter V-6 that?s being currently phased out. The new engine delivers 278 horsepower at 6,000 rpm for a net advantage of 42 horses, while reducing the pound feet of torque delivery by 1-lb-ft. (now 265 at 4,600 rpm) The torque and power peaks have bumped up higher in the rev range, and the V-6 redline is elevated from 5,500 to 6,200 rpm, while EPA estimated fuel economy has been slightly enhanced. The V-6 is projected to make up a take rate of from 80 to 90 percent.

Available transmissions consist of: a 5-speed manual for the 2.7-liter four, or a 6-speed ECT automatic; a 6-speed manual for the 3.5-liter V-6, or the same 6-speed automatic that does duty for the four-cylinder. Both 4×2 (rear) and 4×4 drive configurations are available in either of the two Cab styles: Access Cab (Toyota?s terminology for Extended Cab); and Double Cab (Toyota for Crew Cab). There hasn’t been a Regular Cab available since 2014. Double Cabs are expected to account for roughly 80 percent of the mix.

The new Toyota Tacoma stable will offer five trim levels or models: the base SR; an SR5; a TRD (for Toyota Racing Development) Sport; TRD Off Road; and the top-of-the-line Limited. 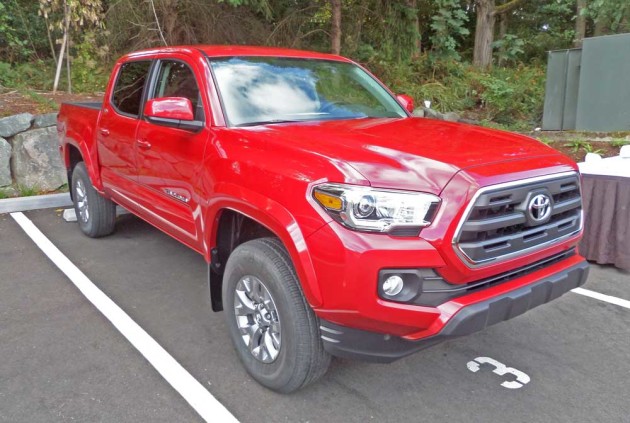 The fuel tank size will remain at 21.1 gallons, but the new fuel conscious V-6 coupled with the six-speed automatic should translate to an extended range. The power steering, which is hydraulically assisted, retains the same ratio and turns lock-to-lock so don’t expect a change in feel or response. The automatic Limited Slip Differential indicator lights up when the stability/traction control button is pressed. 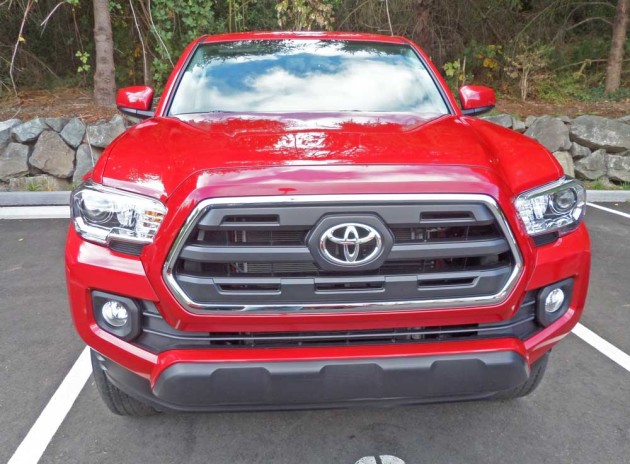 The Tacoma TRD Sport?s hood scoop remains purely cosmetic and is non-functional. Tacoma?s rear brakes continue to be drums, the reasoning being that owners don’t do much towing, although the GVWR is now increased to 5,600 lbs.) and that drums are more desirable for off-road exercises. Additionally, the brake booster and ABS actuator have been improved, so that braking force is doled out precisely as needed. 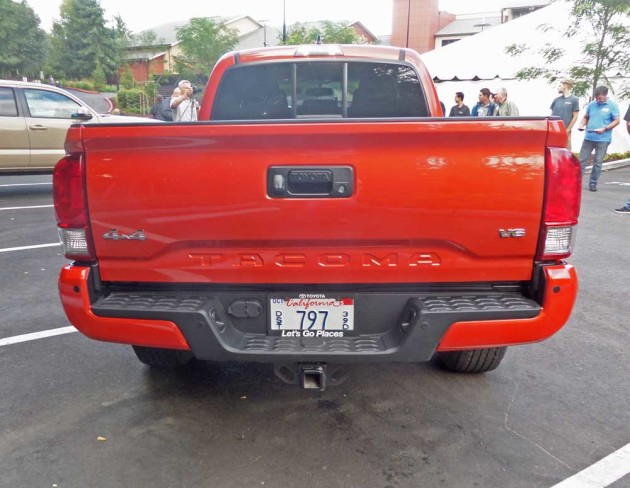 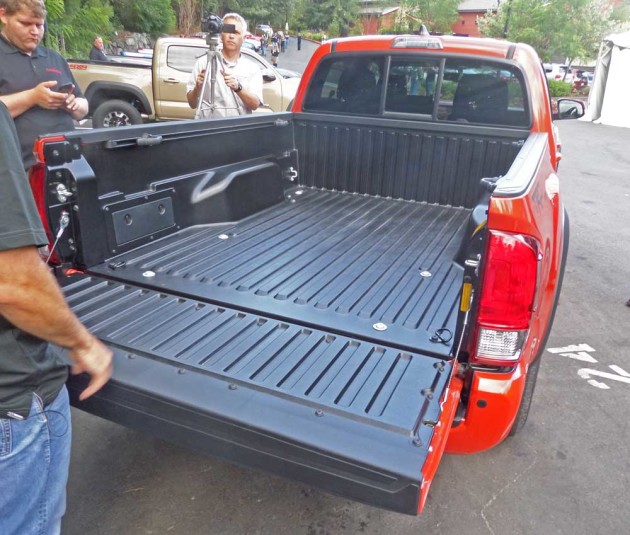 The Toyota Tacoma?s bed interior is made of a sheet-molded composite, which is ten percent lighter than steel, is very durable and is resistant to corrosion. On the down side, it can prove slippery when wet. Beds are available in two lengths: short-60.5-inches and long-73.7-inches, both slightly longer than before and deeper as well, by 1.1-inch. The tailgate now locks and incorporates a damper and an upper edge integrated spoiler.

During the national press launch, my driving partner and I were able to experience most of our wheel and seat time in a 2016 Toyota Tacoma SR5 4×2 Double Cab with a Barcelona Red exterior and Black interior. It was powered by the V-6 connected to the automatic transmission. The base price was set at $31,060 with the final sticker reading $31,960 after factoring in the Destination charge. We were later able to pilot a TRD Off-Road 4×4 during the challenging off-road exercises. 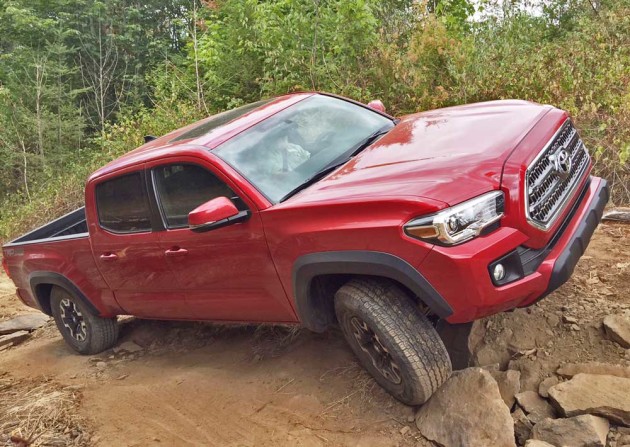 SUMMARY: The 2016 Toyota Tacoma lineup provides several improvements over its predecessors, some more meaningful than others from the perspective of some current Tacoma owners. Let?s face it, some people don’t like change and can exist in a happy state with the status quo. The truck has received some positive styling enhancements without losing sight of its heritage ? nothing revolutionary mind you, but rather evolutionary. 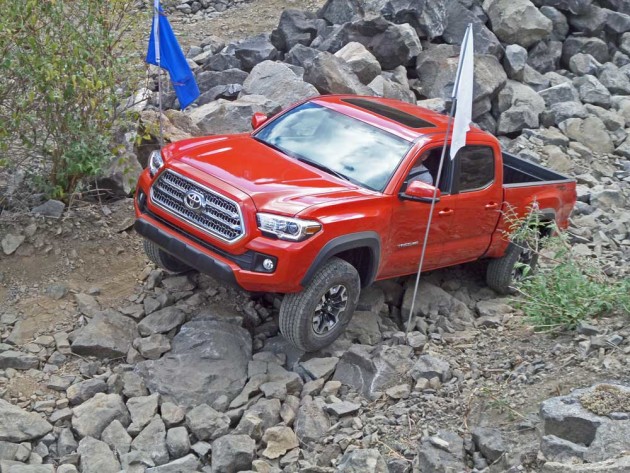 I found the new Tacoma SR5 to be a totally satisfactory hauler. The new 3.5-liter V-6 is quieter, more powerful and more capable than the old 4.0-liter V-6, and the new 6-speed transmission is considerably smoother than the old 5-speed automatic. 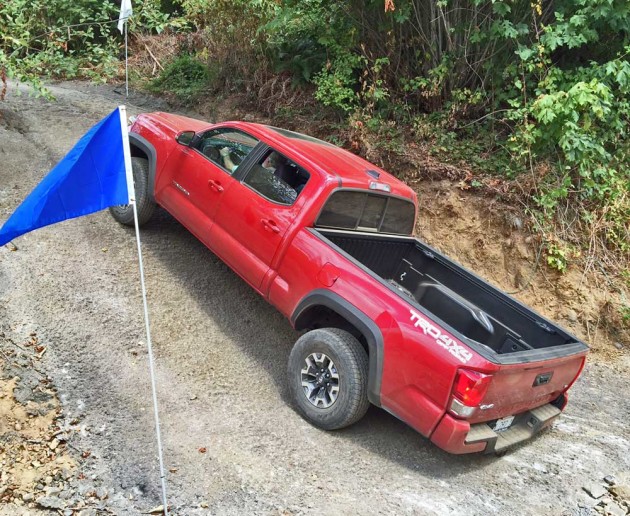 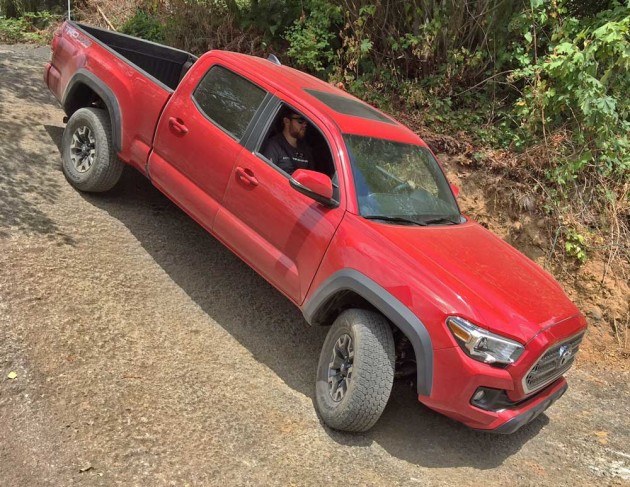 The truck delivers a comfortable and stable ride on road and handles well. The TRD Off-Road 4×4 shines in challenging off-road scenarios. 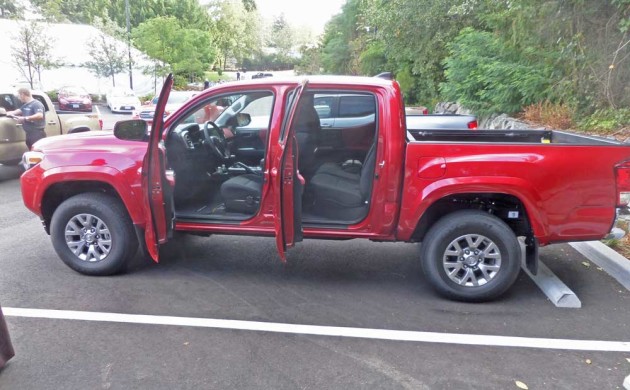 The most impressive off-road feature is the Crawl Mode, which may be set in 5 graduated levels. The Crawl Mode is ideal for exercising precise control when ascending or descending steep grades without any input from the driver other than steering and setting the appropriate mode parameters in advance. There are settings for sand and rocks, etc. to coincide with existing terrain conditions. Other manufacturers of off-road capable vehicles have similar set-ups, but none really surpass the Tacoma?s capabilities when the going gets tough. 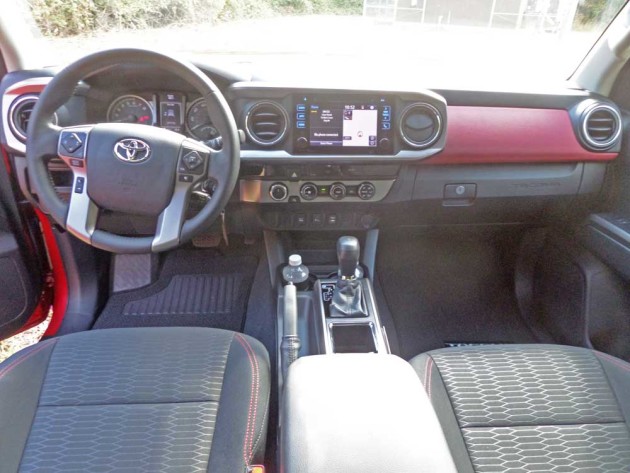 Some of the switchgear seemed oddly placed in an overhead panel, centered above the interior rear view mirror, which really wouldn?t be an issue for an owner who familiar with the operation. 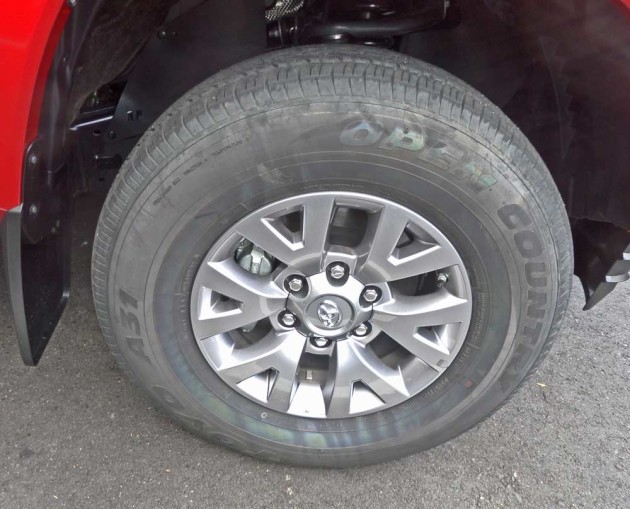 In the final analysis, the new Tacoma stable has enough model variations, with enough improvements and enhancements to satisfy many discerning consumers. Will it continue to own the market segment, or will the ever-increasing competition and number of current satisfied owners threaten its status? Only time will tell. In the meantime, it?s a really good truck. 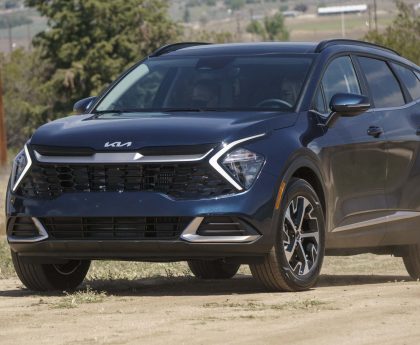 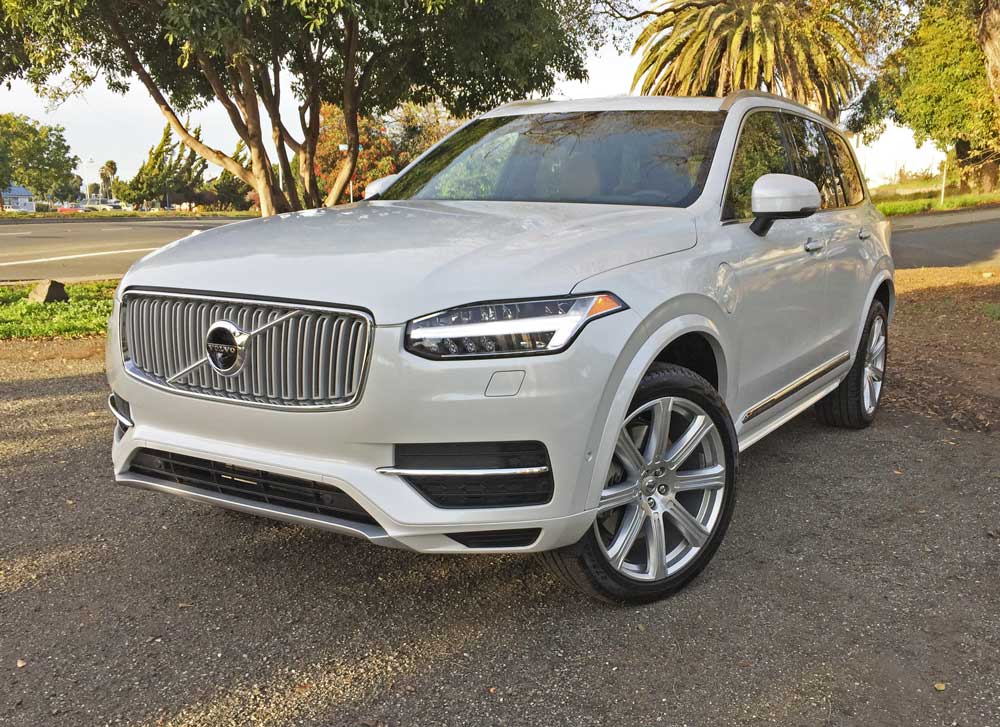