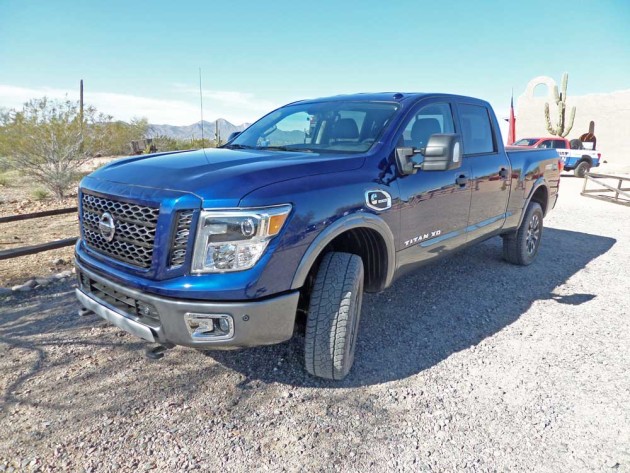 Scottsdale, AZ ? What?s in a name? The name Titan translates as a person or thing of very great strength, intellect or importance. Nissan?s latest entry challenges the full-size pickup segment with bold new styling while combining the capability of a heavy-duty truck with the affordability and drivability of a light-duty pickup. It?s the 2016 Nissan Titan XD. The D is for diesel, in the form of a longitudinally front- mounted 5.0-liter 32-valve Cummins V8 Turbo (Holset M2 two-stage turbo), that delivers 310 horsepower at 3,200 rpm while generating a whopping 555 pound feet of torque at 1,600 rpm. Energy reaches either the rear wheels or all four wheels via a part-time Pro 4X 4WD system through an Aisin 6-speed automatic transmission, and the Titan XD?s Cummins diesel is expected to deliver a projected 20 percent better fuel economy than a gasoline-powered V8 while towing full loads. 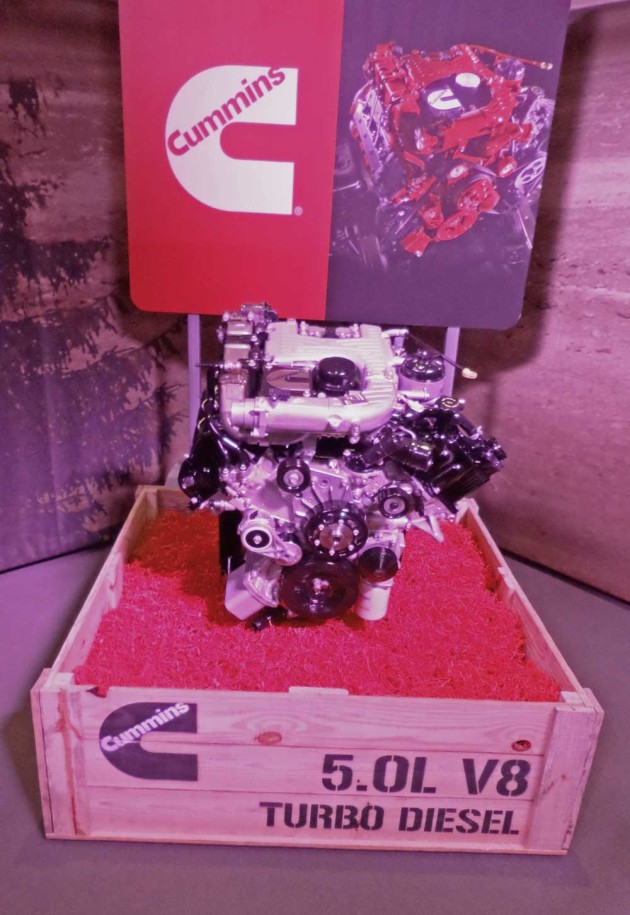 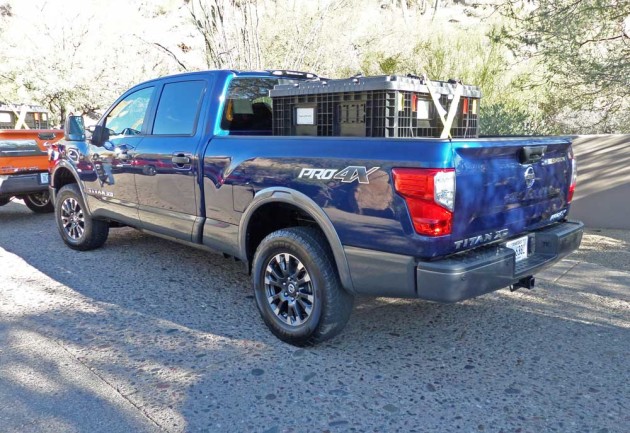 The new Nissan Titan XD is available with three cab styles, three bed lengths and five trim levels or grades. Cab styles include a Single (regular) Cab, a King Cab and a Crew Cab. Beds come in 5.5, 6.5 and 8 feet lengths, and the trim or grade levels offered include: S, SV, Pro4X, SL and Platinum Reserve. Official pricing had yet to be announced at the time of this writing, but a base model 4×2 Crew Cab is expected to start at around $40,000., a Crew Cab Pro4X 4×4 at $50,000., and the top of the line Platinum Reserve Crew Cab 4×4 will begin around $60,000. A fully loaded flagship Platinum Reserve Crew Cab 4×4 model is expected to typically run between $61,000 and $62,000. 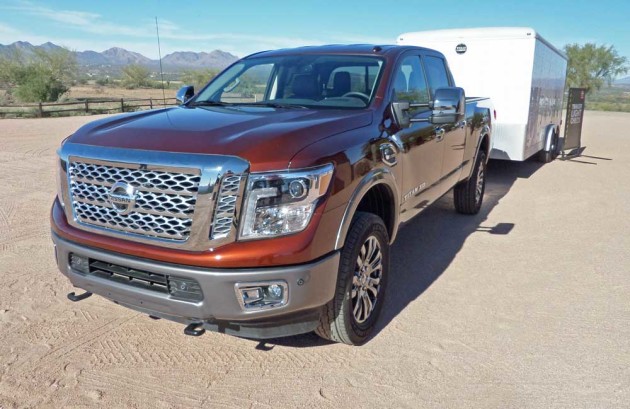 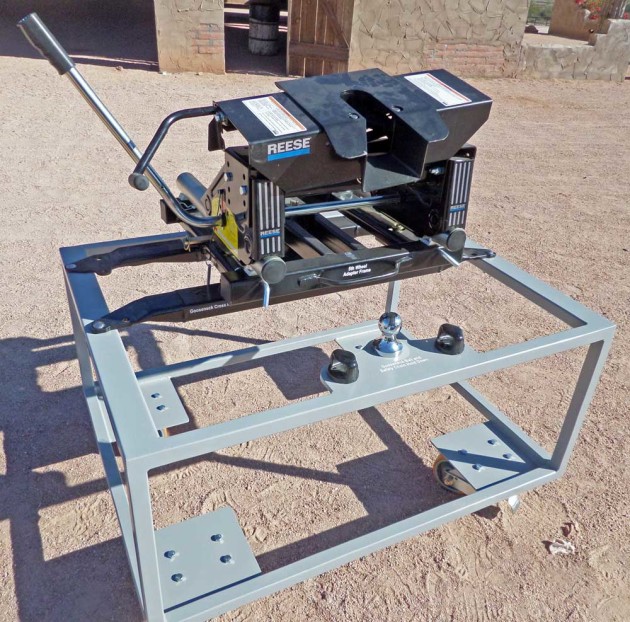 Towing capacity is 12,300 pounds when properly equipped, with about 45 percent more torque at cruising speed than similar-sized gasoline V8 engines. And, the low revving power band requires less downshifting, while providing increased towing confidence, as well as saving fuel whether towing or carrying heavy loads. Available towing aids include Trailer Sway Control, Integrated Trailer Brake Controller, a Tow/Haul Mode with Downhill Speed Control and a unique Trailer Light Check System that allows for a one-person hook-up operation ? checking turn signals, brake lights and running/clearance lights conveniently from inside the cab. Also assisting trailer hook-ups is the available RearView Monitor with Trailer Guides, while the available Around View? Monitor provides a unique “bird’s eye” view of the surrounding area from front, rear and side cameras to aid with parking and pulling in and out of tight spaces. The system also includes Moving Object Detection which helps the driver to detect moving objects such as vehicles, shopping carts or other large objects when backing out via an on-screen notification and warning chime. There?s also an integrated gooseneck hitch engineered into the frame and easily accessible in the bed. Gooseneck hitches put the load in front of the rear axle, enhancing the vehicle control. 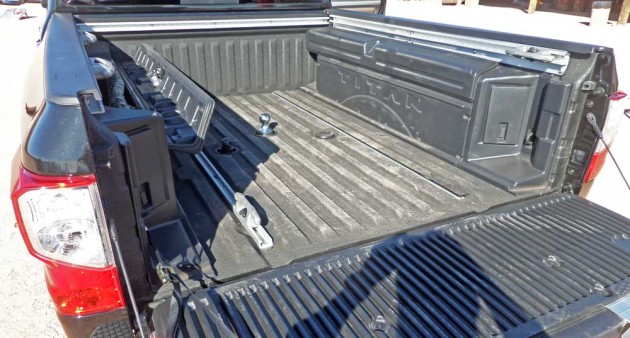 The new TITAN XD features an available dual lockable in-bed storage boxes that sit sight-unseen at street level and are capable of holding a wide range of equipment. Unlike other pickup bed storage boxes, the TITAN XD units are accessible from inside the bed. The boxes are watertight (and drainable) and can be used as a cooler for picnics or tailgating. They are removable when extra bed capacity is required. Other bed features include a spray-on bedliner, flush-mounted LED bedrail lighting, cargo and tailgate lamps, 120-volt in-bed access and a damped tailgate. Nissan?s versatile UtiliTrak bed system is a carryover from previous models. 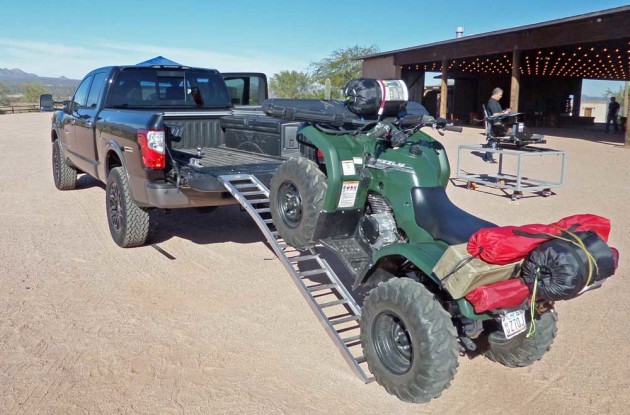 Visually, the new Titan XD?s exterior displays a bold presence, incorporating a front spoiler, roof and tailgate spoilers, a front tow hook hole cover, underbody covers, rear tire wind deflectors and a seal between the cab and bed. The profile, with its extended front overhang, was influenced by the engine, to incorporate the high performance grille, charged air cooler and two-battery installation. 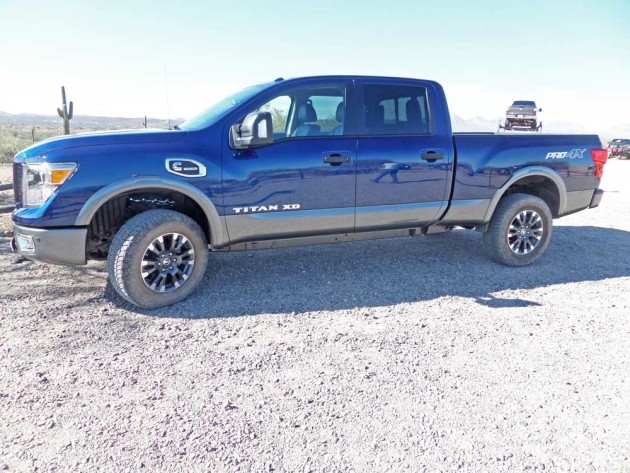 Inside, storage has been increased 33 percent and rear storage 28 percent, and 2nd row underseat storage includes a locking lid for added security and the integrated fold-out flat floor. The center console can hold a computer tablet with case or a 15-inch laptop. 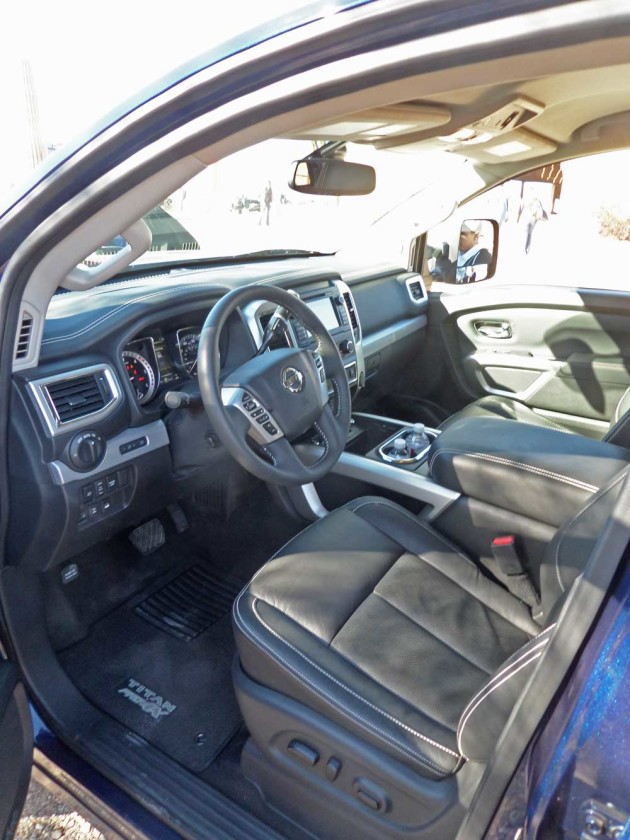 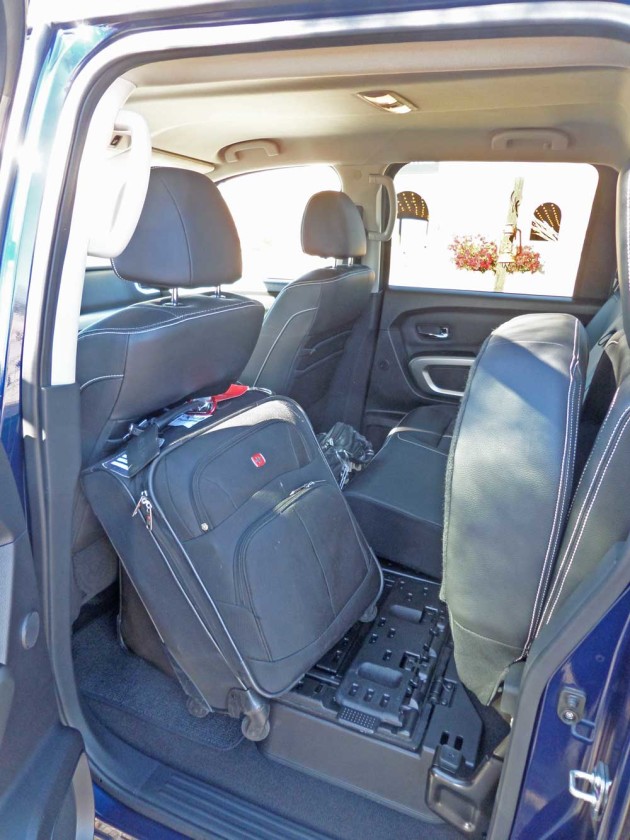 My test 2016 Nissan Titan XD was a Crew Cab model in Pro4X trim. The exterior was sprayed Deep Blue Pearl, while the interior was done on Black. Pricing was estimated to come in at around $52,000 as equipped.

SUMMARY: This latest Nissan Titan XD is truly worthy of its name ? it is both strong and important, particularly in establishing a new class in the full size pickup segment, with commercial strength and durability along with a heavy-duty attitude. The Nissan team established an operation base in the Fort McDowell Indian Reservation, with equipment displays and demonstrations in towing hookup, actual towing exercises and a challenging off road coarse that showcased the big truck?s capabilities on all levels. 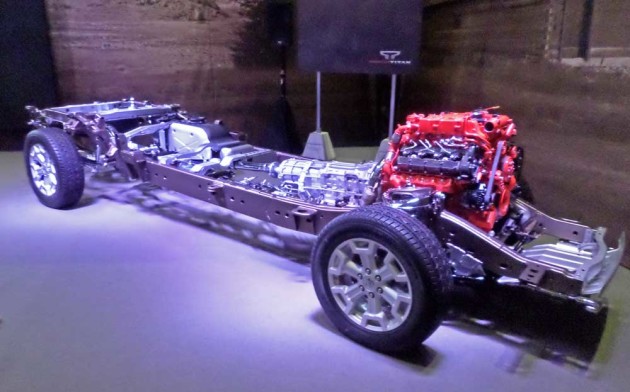 Driving scenarios also included congested urban routes and freeway travel, where the comfort level was pleasing with or without a load. The initial leg of the Titan experience was with a 750-pound payload to a drop-off point where supplies were donated to a charitable organization. The route then took in a course with varied surfaces and conditions to illustrate the ride and handling qualities.
The Titan XD performed admirably in all situations tossed its way, and it is definitely positioned to do battle with competitors from the Ford, GM, Ram and Toyota camps, even though each camp has strong loyalists. 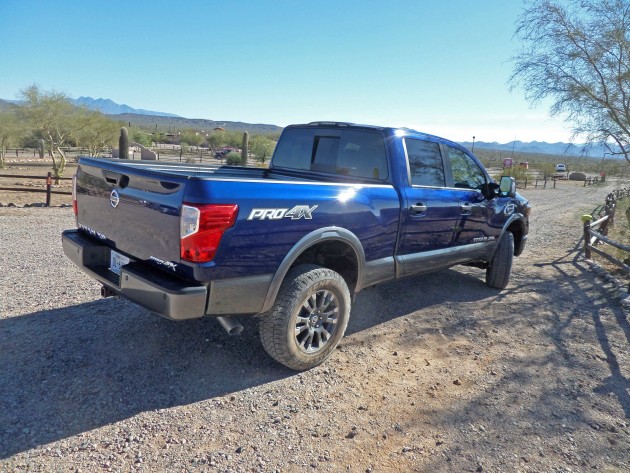 The TITAN XD will be assembled in Canton, Mississippi, with engines assembled in Indiana and Tennessee (5.0L V8 Turbo Diesel and gasoline V8 and V6 respectively). Pricing and full specifications will be available at a later date. 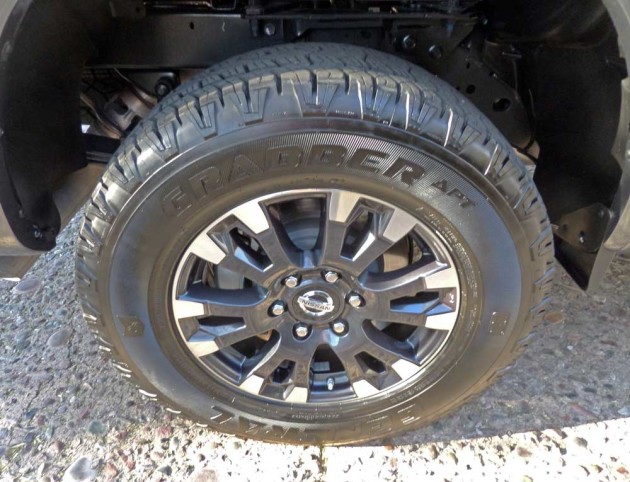 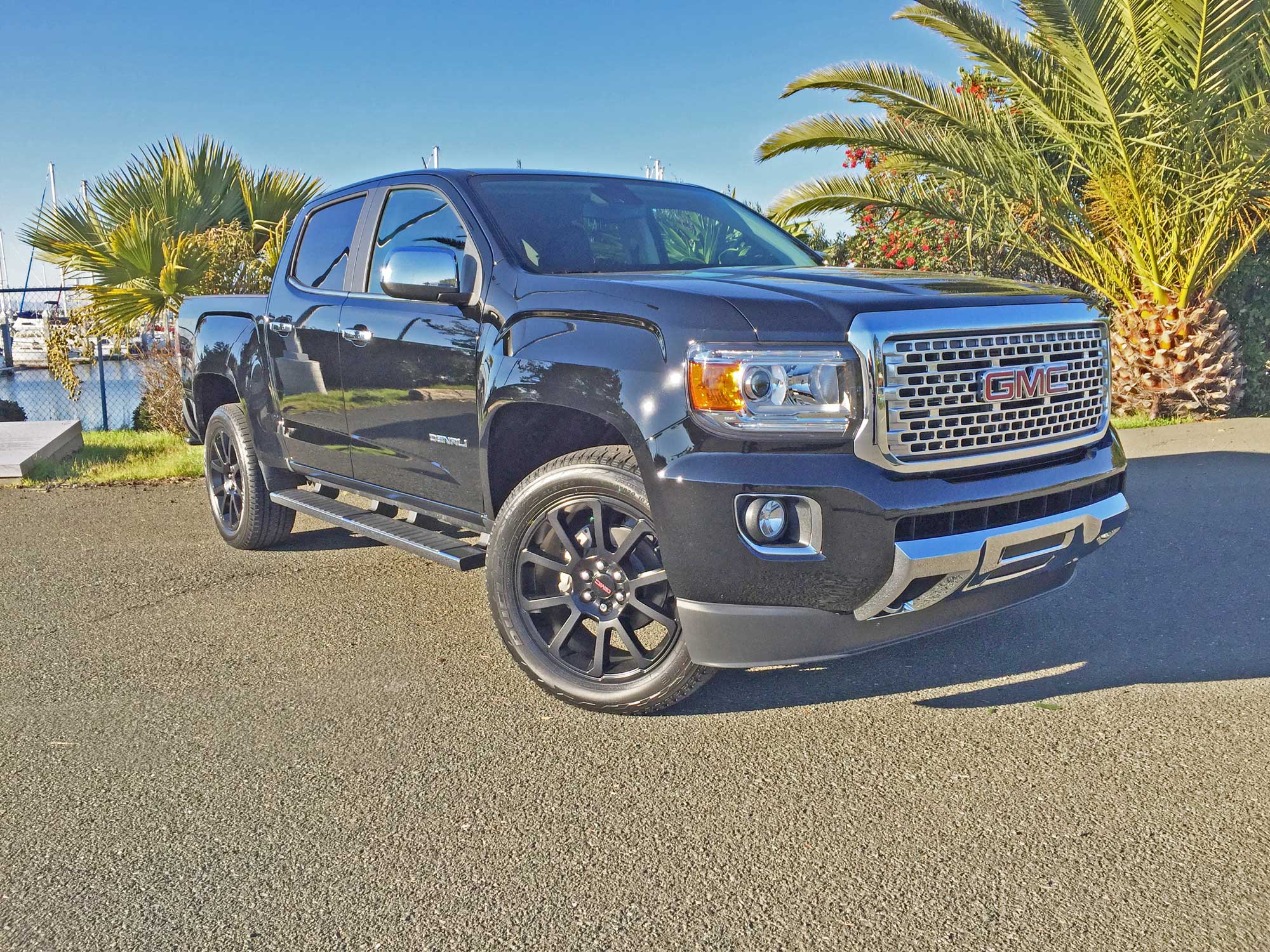 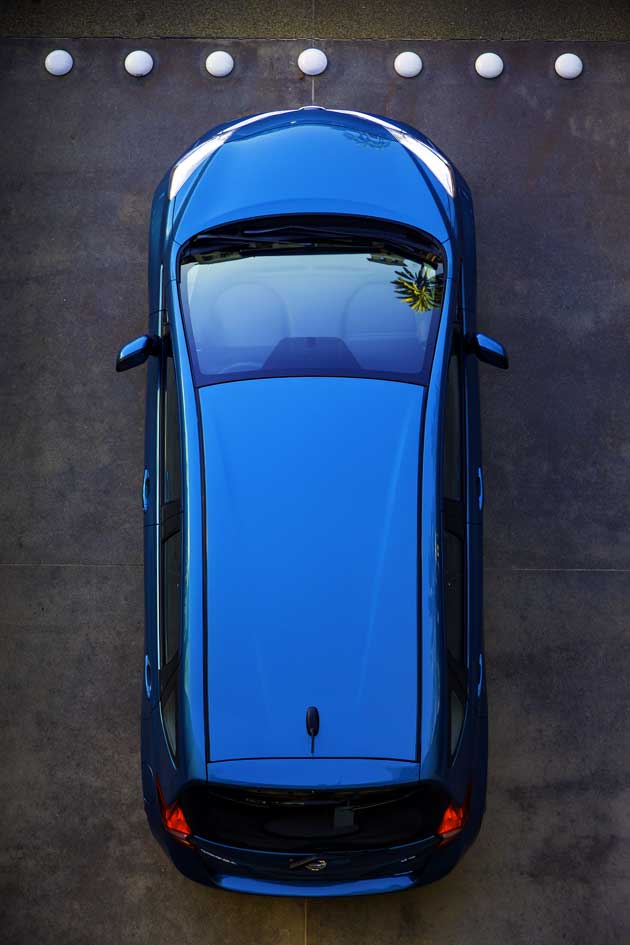