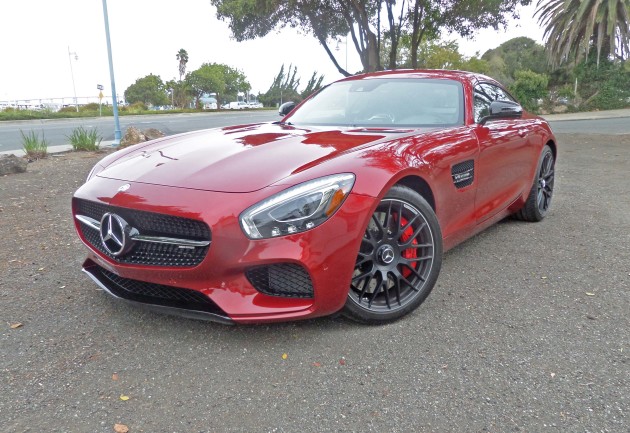 The latest great sports car to come from the Tri-Star camp in AMG?s Affalterbach home base, is the 2016 Mercedes-Benz AMG GT S. There are no Gull-wing doors, but this AMG performance craft can still fly, capable of zipping from 0-60 mph in a mere 3.7 seconds. A car worthy of Grand Touring supercar status must deliver on several fronts: provide a stunningly beautiful and alluring design form; provide lofty and impressive levels of performance; serve up stellar handling characteristics; incorporate the latest state-of-the-art technological features and equipment; and finally, envelop the occupants in luxurious opulence. The Mercedes-Benz AMG GT S accomplishes all of the above, achieving the highest marks in all catergories. 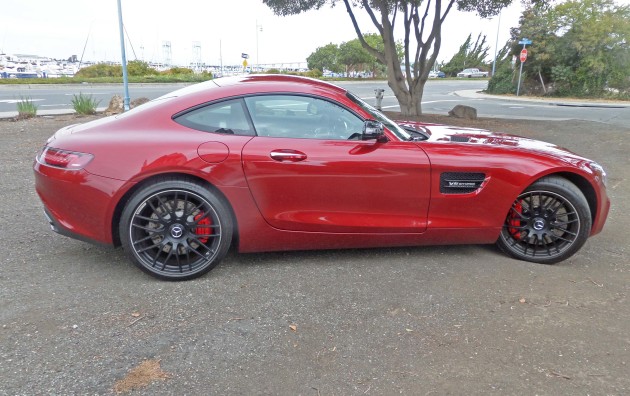 Power for the AMG GT S is generated by a 4.0-liter, DOHC, 32-valve AMG bi-turbo V8 with Direct Injection engine that makes 503 horsepower at 6,250 rpm, while also developing 479 pound feet of torque in a range from 1,750 to 4,750 rpm. The engine?s motive force drives the rear wheels featuring a limited-slip differential seven-speed SPEEDSHIFT? DCT Transaxle with paddle shifters. There?s an auto Sop/Start feature that may be turned off as well. 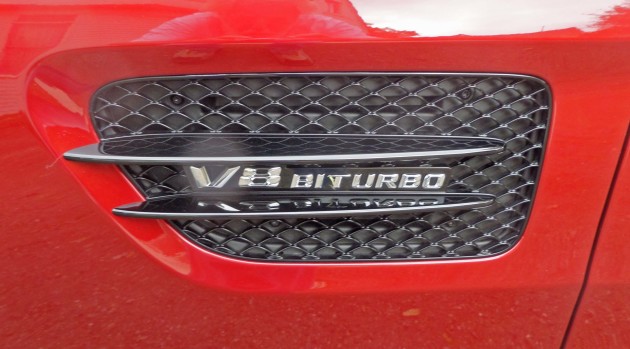 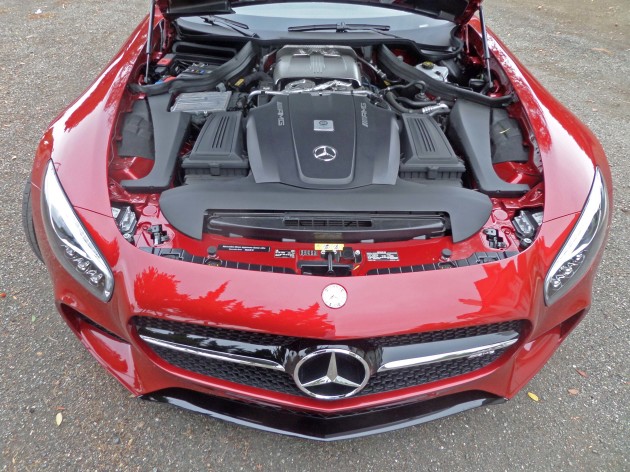 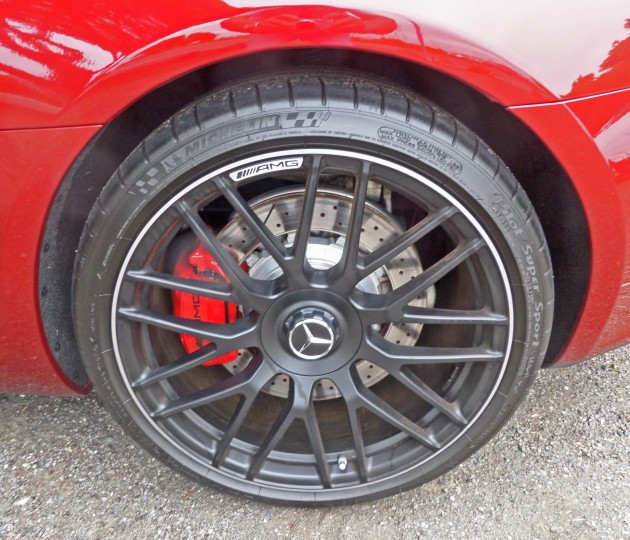 Old world craftsmanship is in evidence throughout the 2016 Mercedes-Benz AMG GT S Coupe, particularly in the engine assembly, where AMG?s ?one-man/one-engine? philosophy still lives, with a single, expert technician responsible for the complete assembly of the engine, who then affixes a personally signed plate, proudly identifying the builder who thusly guarantees his work. 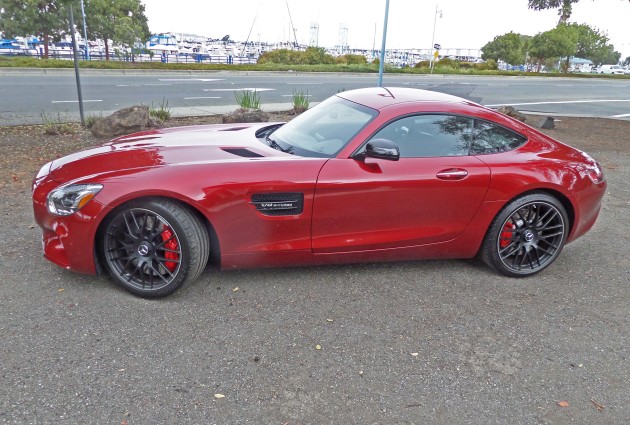 The coachwork is based on a lightweight aluminum space-frame. In terms of styling, the new AMG GT S is patterned after the old, with a long front hood, short body overhangs, compact cabin and abbreviated tail section. Also reminiscent of the 1950s 300SLs, is the wide front grille with its large Mercedes-Benz three-point star and wing-like lamella. 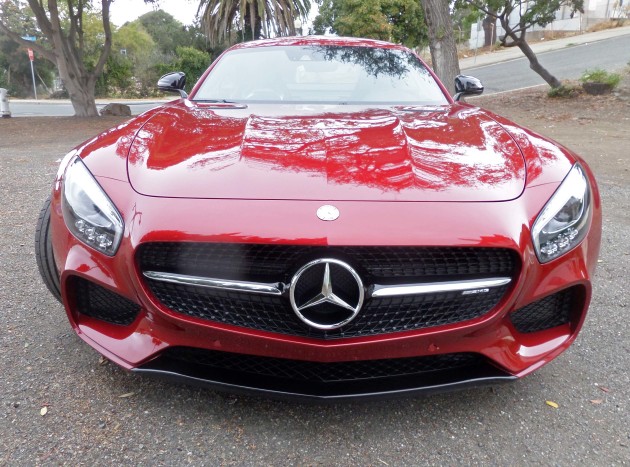 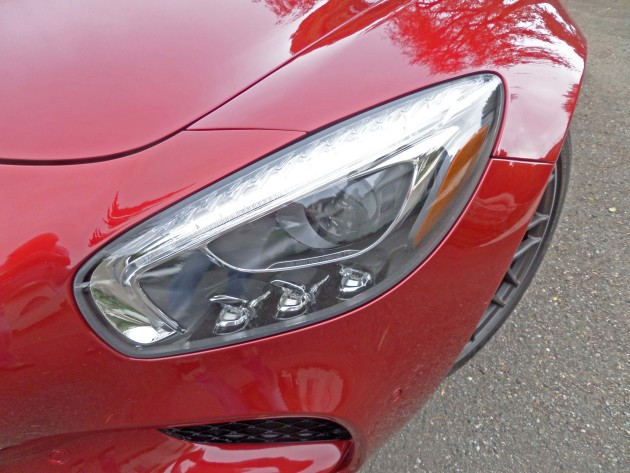 The interior is a highly refined personal space with a supportively comfortable layout that?s executed in both a sophisticated and intuitively functional format. A small T-handle mounted on the center console, serves as an electronic shift lever for the AMG Dynamic Select unit, which also includes a shift mode knob and buttons for selecting engine operational driving modes, starting and stopping the engine and manually raising the rear wing. One touch back on the T-handle engages drive, while a touch forward engages reverse. Pushing the ?P? button when the car is stopped, engages the park lock, which also automatically activates whenever the engine is shut off. 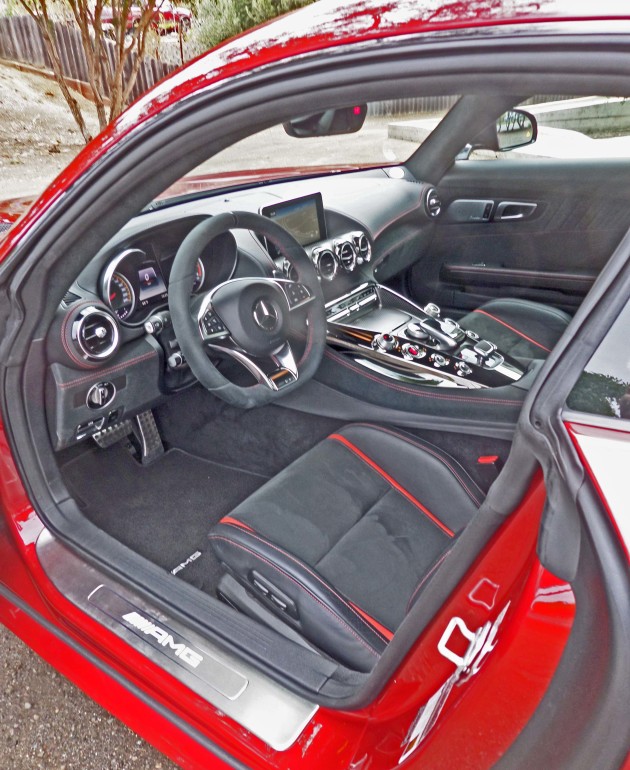 The rotary knob on the AMG Dynamic Select unit is for selecting the RACE START feature and specific drive modes ?Individual custom settings, Comfort, Sport, Sport Plus and RACE. AMG shift paddles mounted on the back of the steering wheel control manual shifting. An automatic rev-matching feature makes for smooth downshifting, automatically metering engine speed for load-free downshifts, resulting in the elimination of lunging and jerking, even in power-on turns or during heavy braking. There?s also a button for activating the Sport Exhaust in modes other than Sport, Sport + and Race, which, when engaged automatically activate the melodious sound. 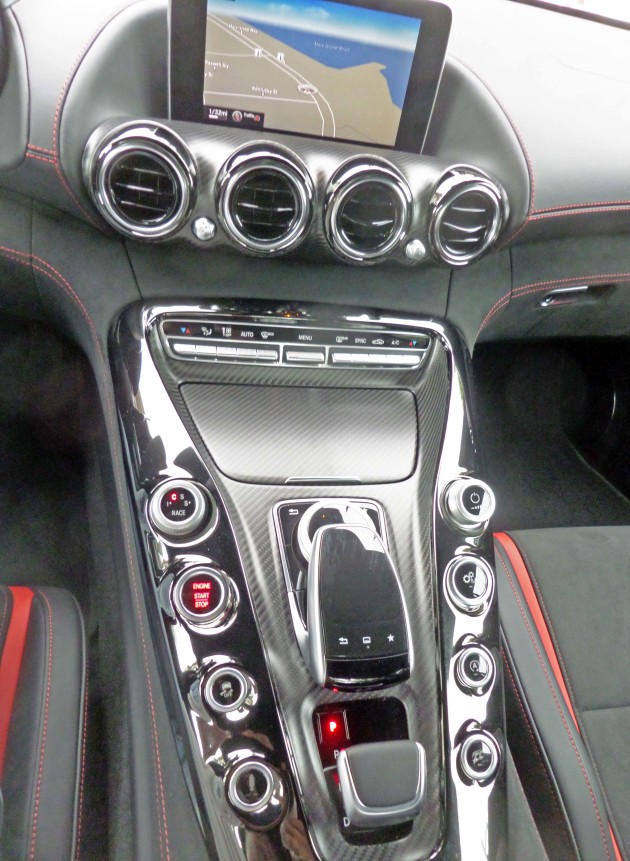 My test 2016 Mercedes-Benz AMG GT S Coupe wore a rich Cardinal Red metallic exterior complemented by a Black Nappa interior with contrasting Red stitching and piping, along with generous amounts of carbon fiber trim elements. The base sticker read $129,900., while the final tab after factoring in optional features, but before tax and license, was elevated to $153,080. It?s certainly possible to spend more for other custom personal treatments, but really unnecessary. 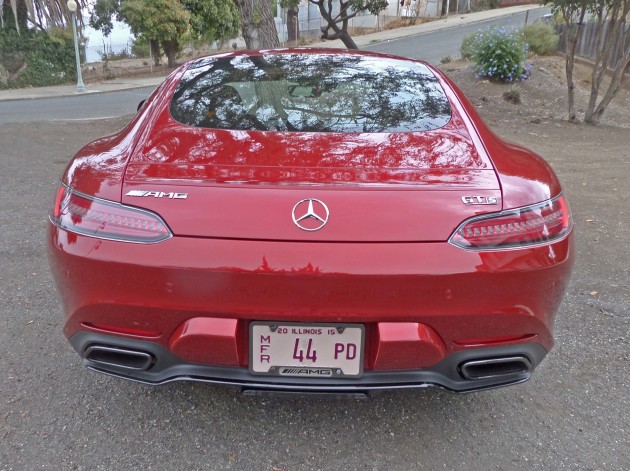 SUMMARY: Acceleration is astoundingly lightning quick ? particularly for a naturally aspirated engine, and the steering is a spot on delight, with instantaneous response. The ride quality is driver (or passenger) adjustable, and the Comfort selection seemed to be the right setting for normal conditions over varying pavement surfaces. 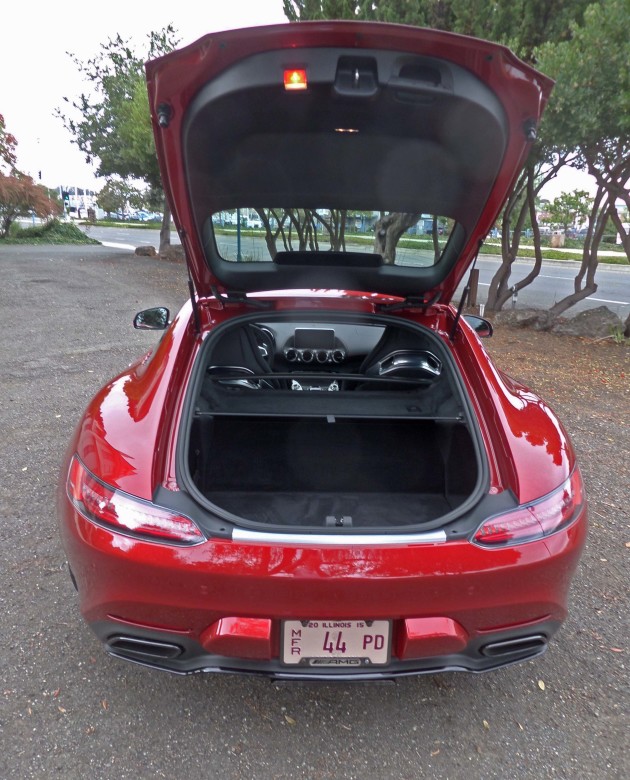 If there are shortcomings at all for the AMG GT S Coupe, I can’t think of them, and in the final analysis, the 2016 Mercedes-Benz AMG GT S Coupe is an incredible automobile that is a thing The melodious and thunderous exhaust note is audibly stimulating at virtually any rpm level, which for me rendered the Burmeister High End Surround Sound system virtually useless, as incredible as it is. All of the safety and technological features and equipment of the Mercedes-Benz AMG models are covered by a new car 4-year/50,000 mile warranty, the Mercedes-Benz maintenance system and 24-hour roadside assistance. Yes, the original 300SLs were gorgeous, and were a stellar performer in their heyday, but they lack the finesse, brute force and technological features of the latest examples. The new Mercedes AMG GT S Coupe is sure to become a classic in its own right. 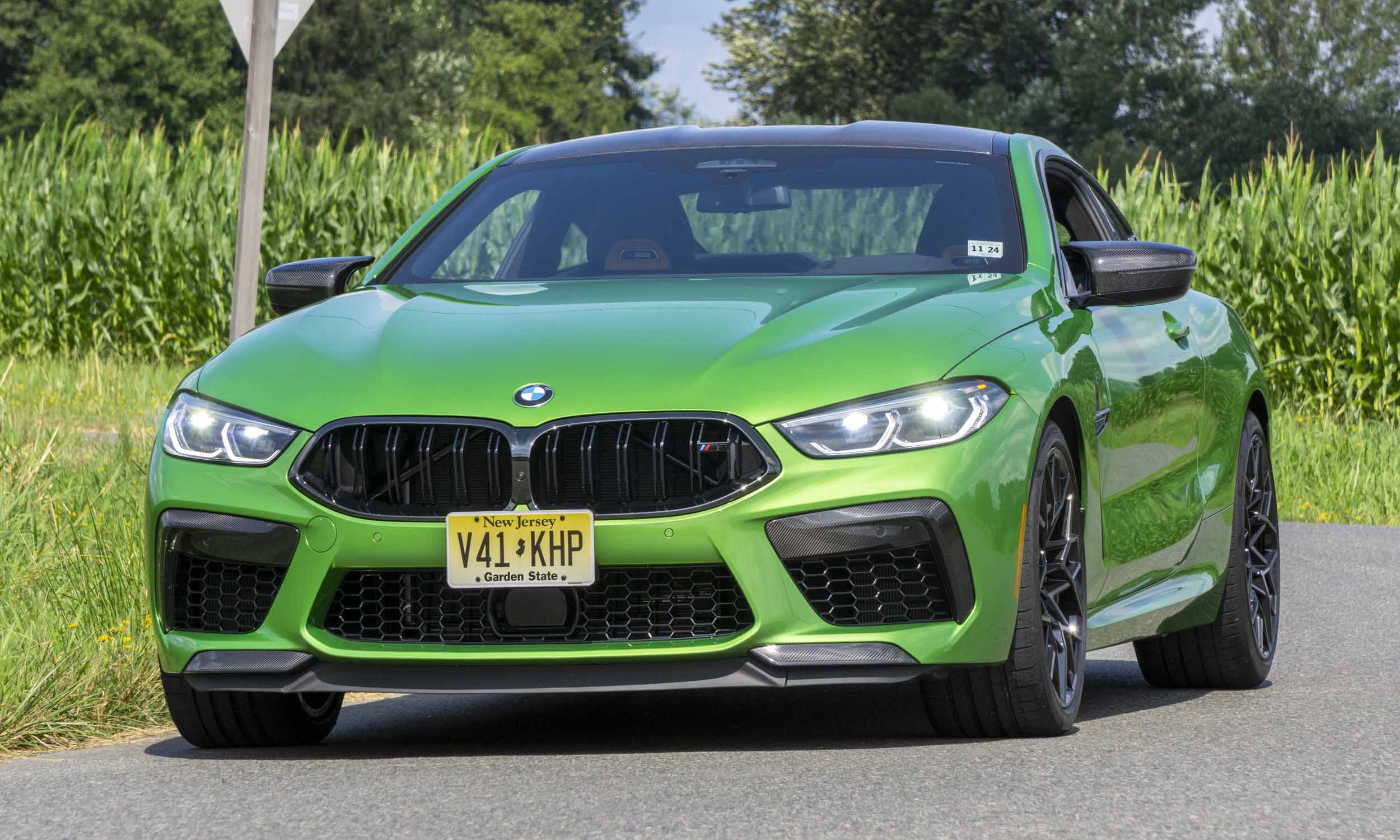 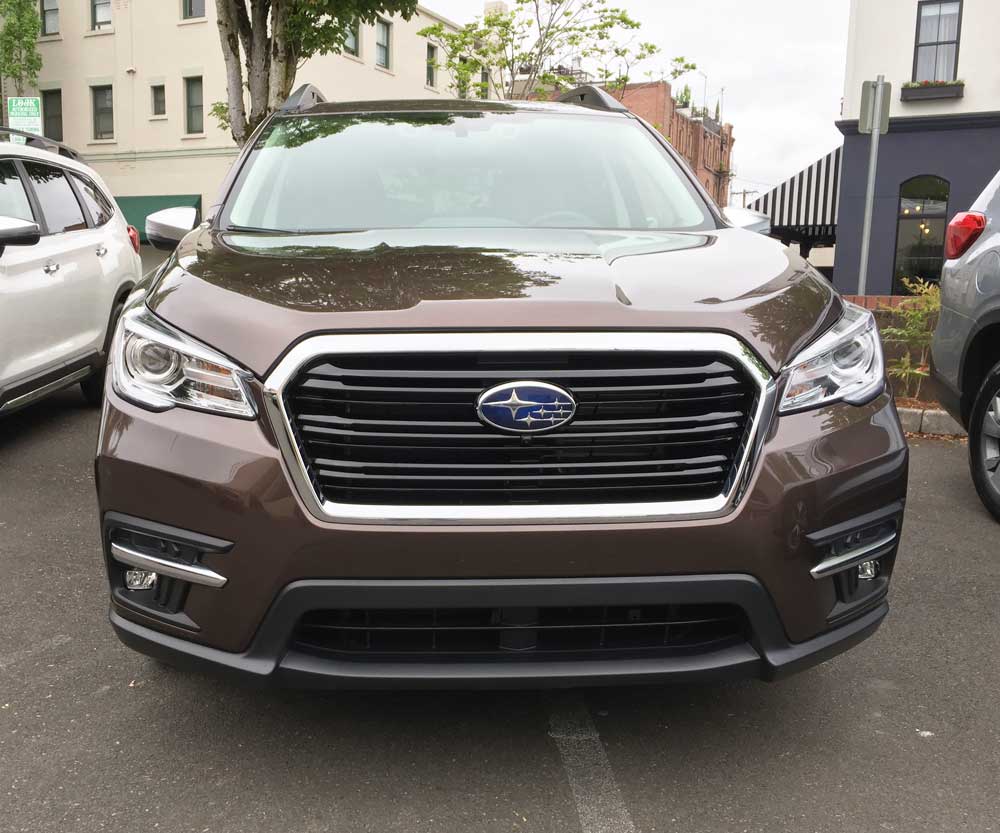